Gosh, that was a fretful night. I slept in with Cornelia so I could monitor her and her temperature overnight, measuring it every couple of hours. It rose to 104.6 (40.3) at 04:00, really making me worried. After discussion with Ian, I woke her to give her another dose of Calpol, and although she said her tummy hurt, and spent ten minutes blowing her nose, she fell back to sleep, waking briefly at 06:00-ish and again at 08:45. I took her temperature again at 08:15 and it had gone down slightly to 102. Whenever Cornelia has had a fever before, it has only lasted 24 hours and she’s bounced back very quickly, so I am hopeful that the ferocity of this fever is a good sign that her body is fighting whatever it is fiercely!

Ian and I think that she probably has a nasty cold, given the constant nose-blowing and coughing, but we are also mindful that we have been in areas where dengue fever can be passed on by mosquitoes (and she’d received half a dozen bites on her upper body that last night in Siem Reap, having escaped any all year!) and the zika virus is prevalent. She was being gorgeous, in between nose blows, and as I gave her a fresh tissue saying “Just in case you need it”, she said, “Thank you, Mummy, you’ve thought of everything!” 🥰 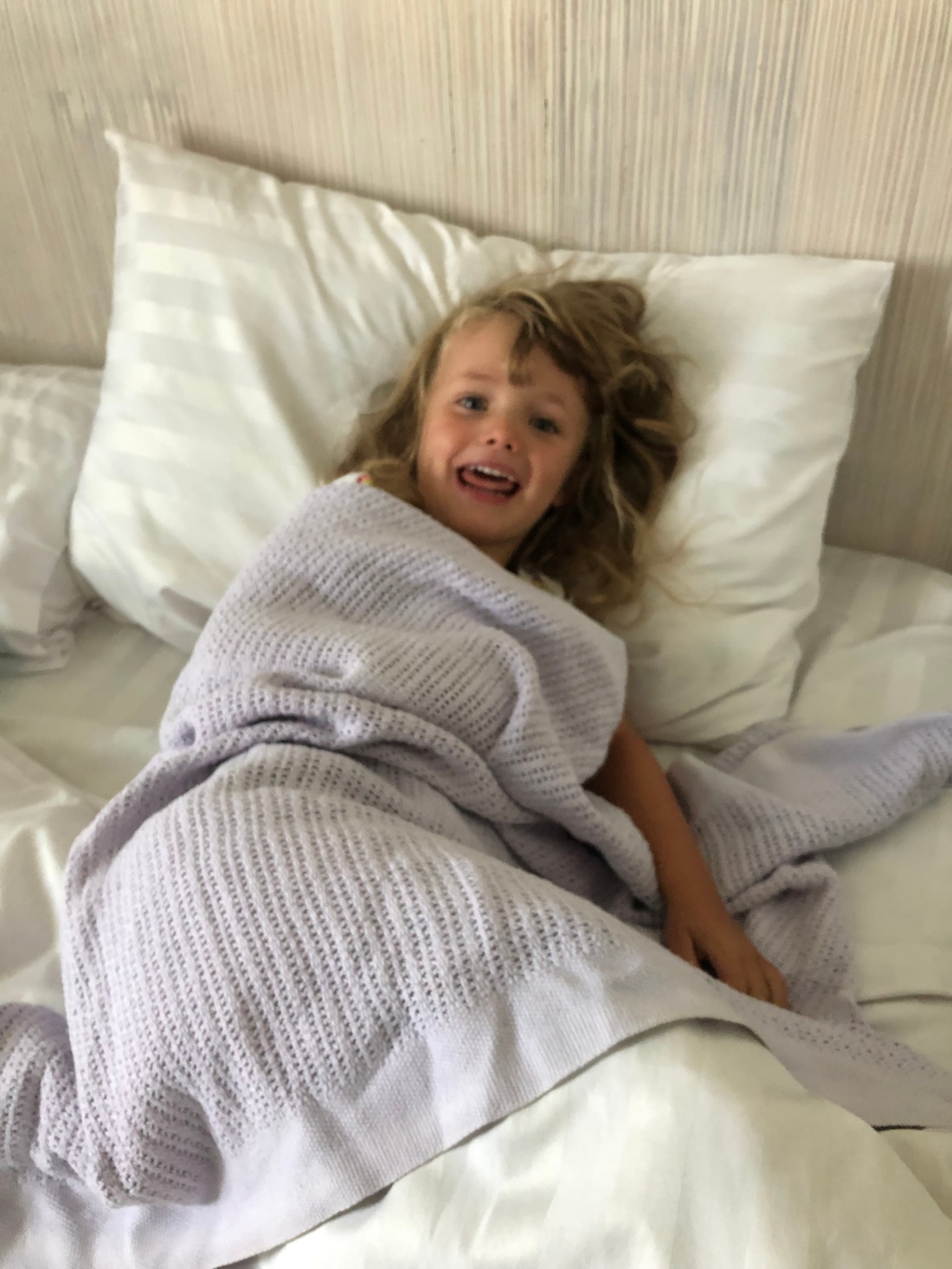 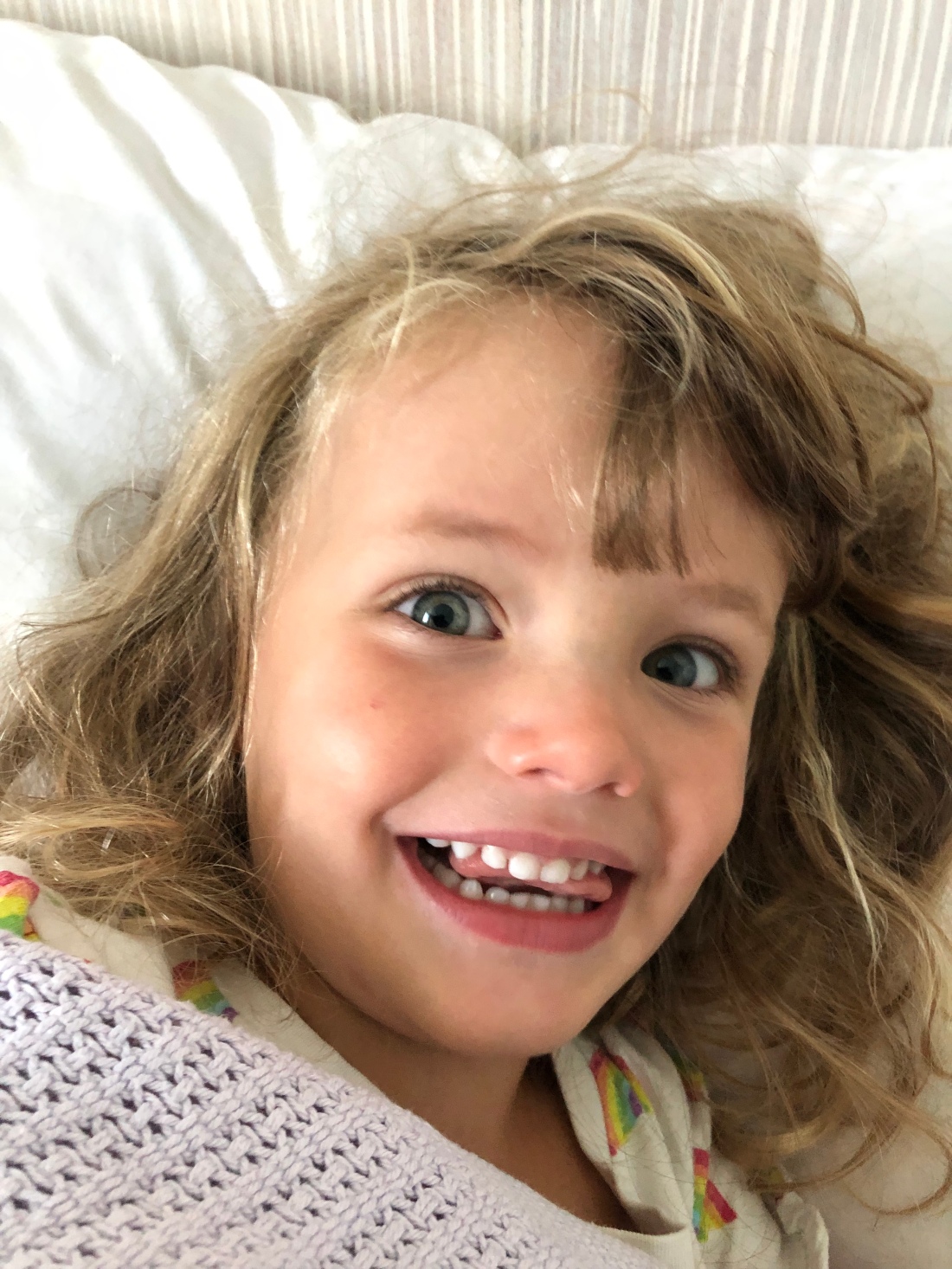 I was also concerned about other germs that may have amassed on her Gang members, three of whom she chomps on at night.  I washed Molly and Cowbat, then sterilised them both and hung them out to dry.  I need to get Cowding away from her at some point too!

Ian went down for breakfast, but Cornelia didn’t want to go, so he brought up the other plates for me and Bugsy to share. Despite her fever, she was in a particularly cheery mood and once again, but for the thermometer and physical heat of her body, you’d never know she was unwell! 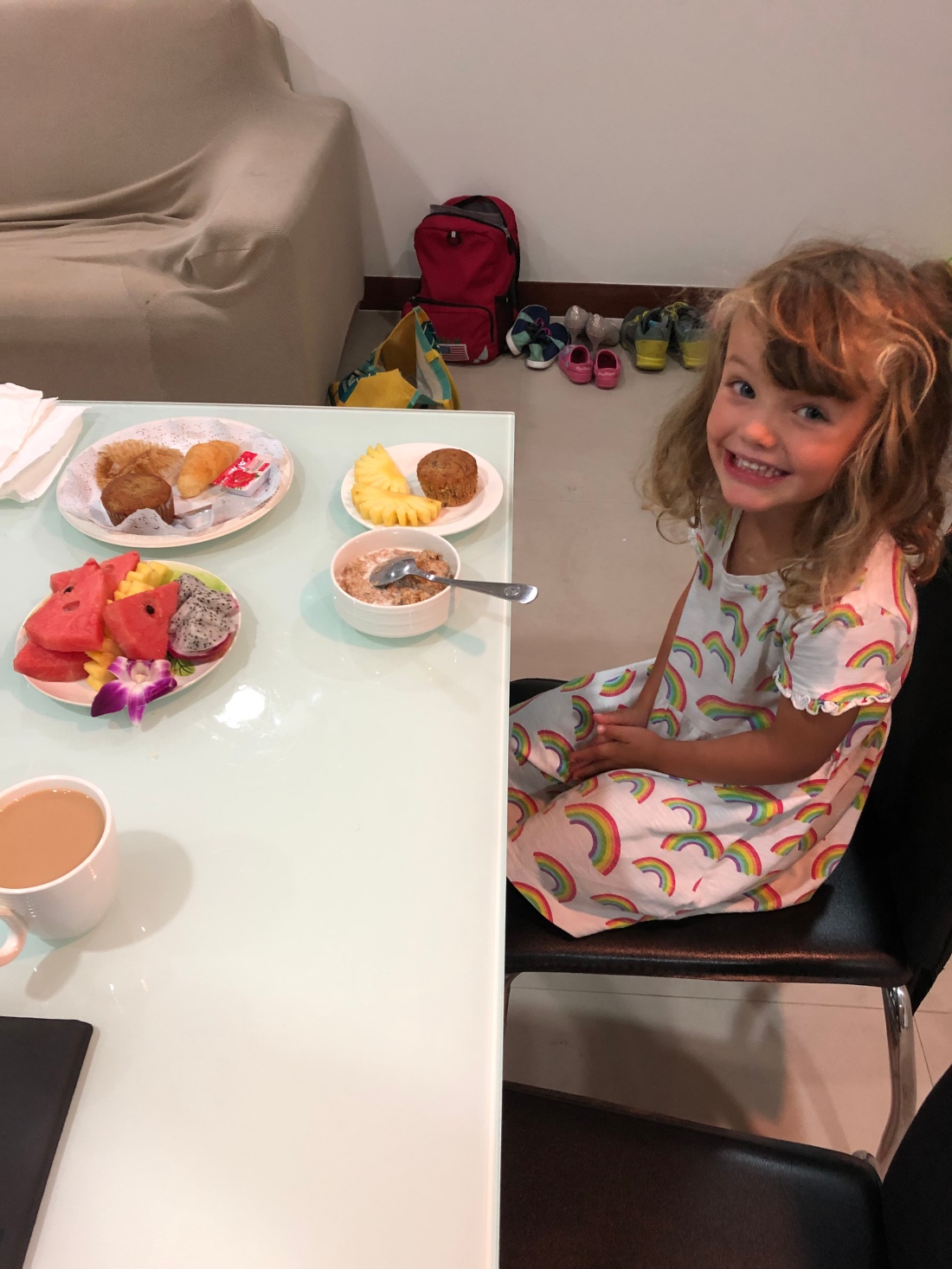 As you can imagine, it was a bit of a boring morning!  She watched a new programme on her Kindle, called Arty Galaxy, and while Ian went to pool for an hour, I read a book and occasionally wiped Cornelia’s nose!  Just after Ian had left for the pool, the cleaners came, for the first time in the three nights we’d been there!  Apparently, it’s not actually an hotel, it’s a residence, and the service is not that of an hotel.  We had already run out of loo roll and had to buy some of our own, and empty the bins.  All in all, I was not loving this last part of our trip that was supposed to be complete luxury, before Ian has to go back to work.  Anyway, we had fresh towels, fresh sheets, more loo roll at last!

Ian came back after his hour at the pool, and then it was my turn. I just lay there for an hour, turning over every fifteen minutes to ensure an even tan…!  Just as I looked up to our balcony,  Bugsy called out to me and her and Ian came down for lunch at the poolside tables.  Her temperature was hovering around 101, so once she’d eaten her cheese toastie, she was allowed some pool time again.

She made a new friend in the pool – Emma from Mongolia – who spoke very good English for her age, and we just threw a ball around together for an hour before she left to go upstairs with her family.  Cornelia had had enough too so I dried her off and we all went back up to our room. Bugsy watched yet more of her Kindle while Ian went off for water and beer, and then I showered with her before it was Ian’s turn to get clean!

Cornelia was feeling energised, so we walked down the hill to EAT, a restaurant that had really excellent reviews.  We hadn’t booked, so the host told us that as long as we could eat our meal in the next hour and fifteen minutes, we could have a table!  Done!  The atmosphere was great, and the staff went out of their way to make Cornelia laugh.  Ian and I both had the chateaubriand that our Swedish host recommended (the beef is imported from Australia), and it was absolute perfection.  Just so, so tasty!

Mid-meal Cornelia decided she needed the loo, and found it hilarious that there was a “No Diving” sign in the bathroom.  She chuckled away to the joke and told the waiters how funny she found it, which just delighted them even more.  Stupidly, I agreed to her request for a chocolate ice cream again, which they gave to her served with chocolate sauce and extra sticks of chocolate.   Uh oh!

It was a terrific evening, despite having to leave on time (we would happily have stayed for longer!), I felt very full as I trudged up the ridiculous hill with a tired toddler on my back!  At bedtime, she asked for three stories which Ian read, then I cuddled her for a bit before leaving her to sleep.  Then she started calling out for me, so Ian went in twice, before she finally went quiet.  We went to bed ourselves at 21:45, as I was especially tired from last night, but she called out for me twice, and the second time, I stayed in with her as temperature was starting to go up again. I was very much hoping that we would have more sleep than last night, but I think that when you are a parent and your child is unwell, it is very difficult to have a deep sleep!

One thought on “The not much day!”