When Bugsy woke up, she said that she didn’t feel very well, and as her skin felt quite hot, I took her temperature. It was 101.7. Uh oh. I gave her a small dose of Calpol, and as she was otherwise in perfectly good spirits, she got up and asked if she could do some drawing before breakfast. She drew a magnificent wicked queen complete with cauldron and poisoned apple, a la Snow White. Next was the same witch holding a poisoned comb, this time with a cauldron filled with (very specifically) jellyfish blood, a puff of blue smoke, melted banana, some green poison, and five scoops of ordinary orange powder to make it all sparkle. Then “a teensy bit of squeezed juice from an old apple, and finally the pink from a rainbow”.  Hopefully her inspiration wasn’t from our cookery class in Vietnam…!

We went down to breakfast which made us despair… There are only two options for breakfast: European and American. We ordered two Europeans, with one cappuccino and one English Breakfast tea. 50% of that order was wrong! 🙄 Anyway, she was very sweet about it and rapidly replaced the incorrect meal and drink, and we shared our muffins and fruit with Bugsy, who seemed well enough to eat everything she was given! 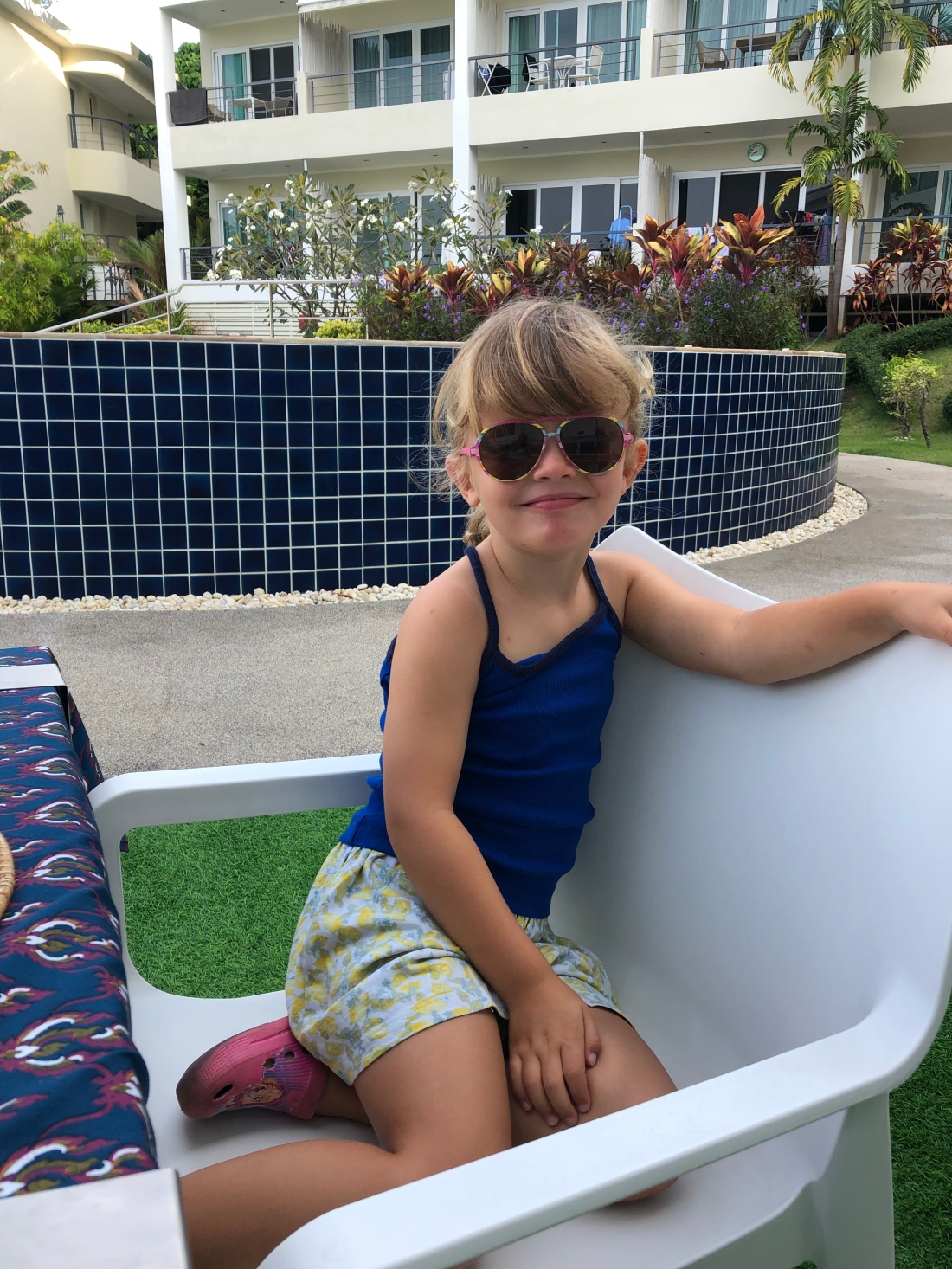 While Cornelia rested upstairs with me, Ian went for a walk to get more water and continue his hunt for tea bags, which have so far eluded us! I haven’t been this tea-less all trip! He returned pouring with sweat, with plenty of water… but still no tea bags. He had visited two mini marts and couldn’t find them anywhere.  I shared a bag of crisps between him and Cornelia, so he could get his sodium levels back up and, as she wasn’t in the mood for lunch, she also had a yoghurt.  She lay on the sofa watching TV for the rest of the morning (cartoons in Thai, mostly!) and Ian went out again to collect the laundry. 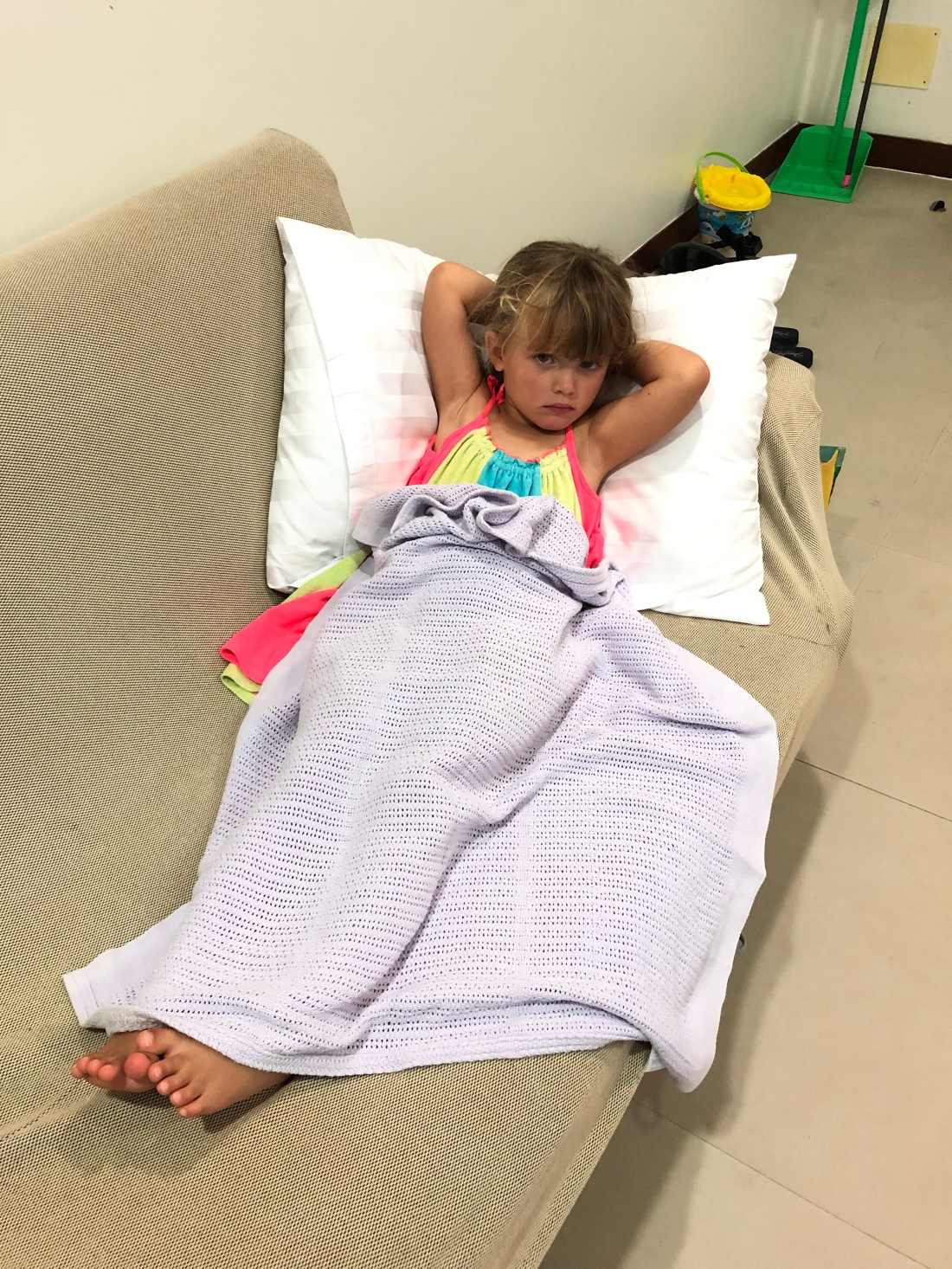 He went down to reception to collect the laundry that had been promised last night, but that we agreed with the staff we would collect in the morning.  Imagine my surprise when he came back empty-handed, saying that he had been told he was wrong and that it wouldn’t be ready until today at 17:00.  I stomped off down that, fuelled by frustration and lack of sleep.  The following conversation ensued:

Hi, my husband’s just been down to collect our laundry that was ready last night and has been told he can’t collect it until this evening.

But when we came down last night at 6 o’clock, we were told it was ready, and in fact, one of your guys was just about to go and collect it for us, when we said that we would pick it up this morning instead, as we were just going out for dinner and didn’t want to hold up the shuttle bus.

Yes, that’s exactly what we were told.  He was even getting on his moped to collect it before we stopped him!

No.  You have misunderstood.

No.  I have not misunderstood.  I want to be perfectly clear about this.  If we had had to wait 48 hours for laundry which was costing us twice as much to take twice as long, we would have taken it ourselves.  That was the conversation we had yesterday and that was what was agreed.

That is completely unacceptable to us and completely outrageous.  I am very cross about this indeed.

I stomped off, absolutely livid, but before I composed my email to the manager to complain , I needed to check on Bugsy.  At 13:00, her temperature had dropped to 100.3 and as she was desperate to go to the pool, we agreed that she could have an hour there. She played very happily in the pool and you wouldn’t have known she had a fever! We kept to our hour, before returning to our room, where I pinged off my email to the manager about the laundry problem, explaining that in the 40 countries that we’ve now visited, this is the only time I’ve felt the need to complain and that the attitude of the staff member I spoke to was totally unacceptable, not least because he was wrong and I had not misunderstood the situation.

Around 15:00, her temperature went up again to 102.9, so I gave her a larger dose of Calpol, and she rested on the sofa, watching some of her Kindle episodes, while I tried not to storm down to reception in a blaze of fury.  Here is an extract…

we apologize that you had some Difficulty Dealing with a Real Language Barrier with our Thai Stuff Team, in order to get a better understanding while traveling in Thailand I would recommend you to Talk slower, not louder. Speak clearly, not forcefully. People of a different language and culture can hear fine. regarding the Laundry service let me remind you that we coordinate with External laundry service to provide this Service for our guest. there was a huge delay with the laundry order unfortunately we apologize about this unexpected event

So, just to be clear once again…. it WAS expected the previous day, it’s just that there was a huge delay on this occasion, and I had not in fact misunderstood a single bloody thing…  I was NOT appeased in any way by this response, and had Ian not persuaded me to just leave it, I would probably have packed up and booked us another hotel for the last few days.  I then became quite upset that this last part of our amazing adventure was being marred by an irritating argument, where I was being accused of failing to adapt to and respect a different culture, which is quite the opposite of how I see myself!  In my view (of course!), it was, in fact, one crappy member of staff not understanding how to deal with a pissed off guest!  The silver lining to the cloud was that we didn’t have to pay for our laundry, but that still meant we were all without pants for the day…!

Ian managed to soothe my mood, and once I’d recovered myself, I went to check on Bugsy, who was then fast asleep on the sofa.  Now, that was as shame, as we’d just ordered Italian to be delivered and it was about to arrive!  But she stayed fast asleep and so Ian and I ate our food (very nice, simple pasta) and drank some beer, waiting for her to wake up again. 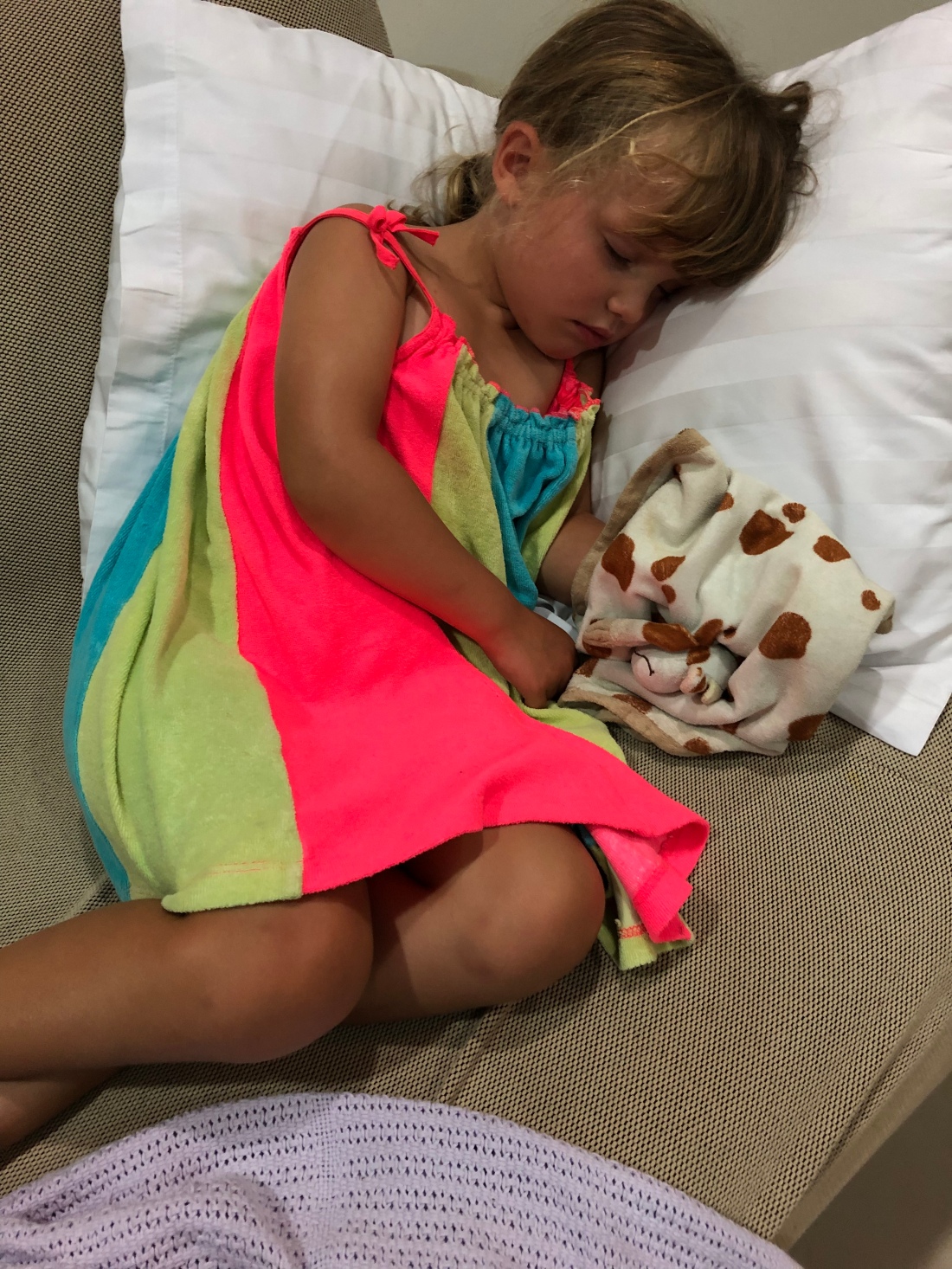 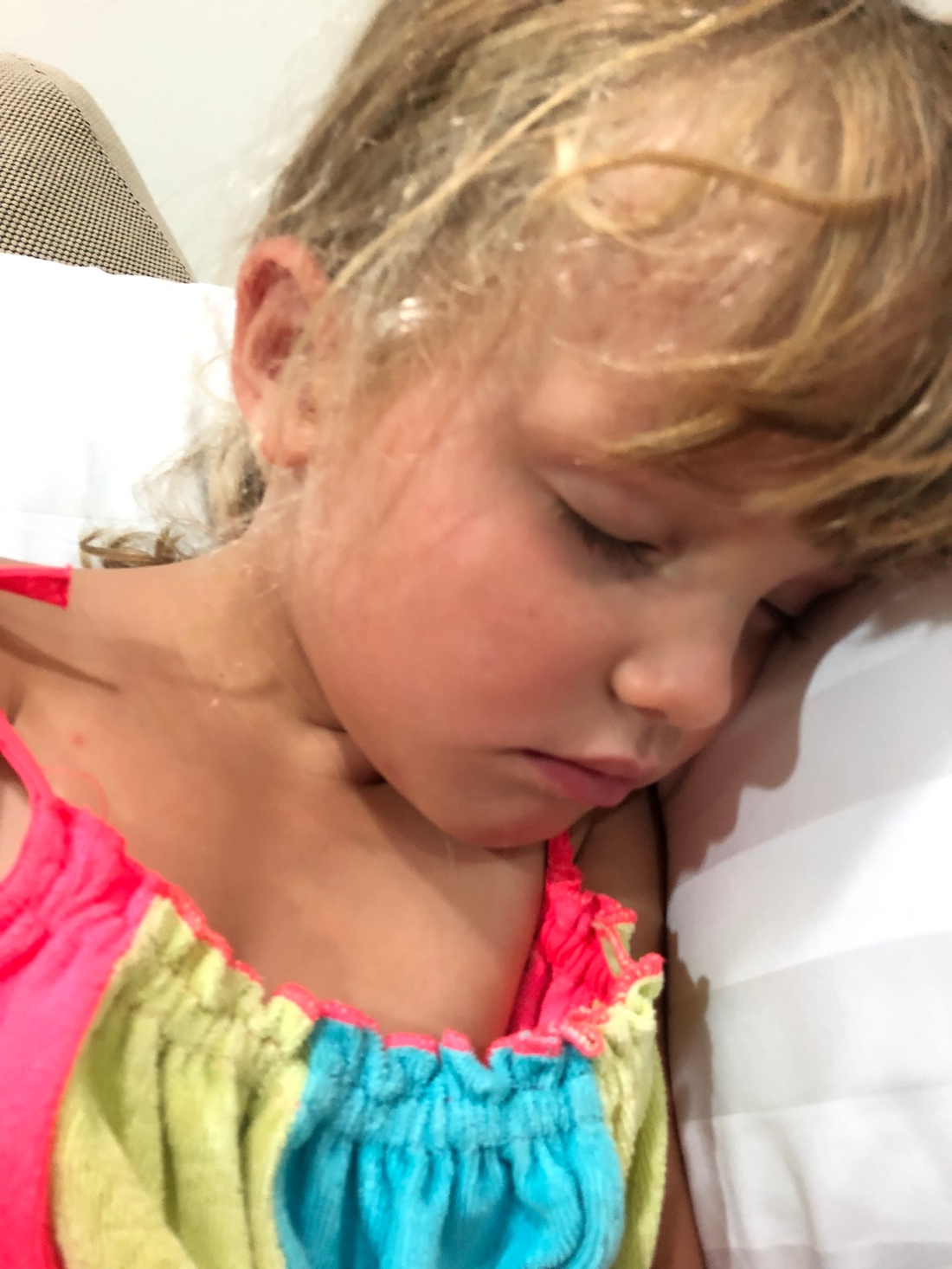 I’d added a Tiramisu to the order which I was meant to share with Ian, but it was so yummy, and Ian was “waiting until later” to eat his portion, by which time, his half was more like a small quarter…!  🐷

I took advantage of Cornelia’s epic sleep on the sofa, by watching Suits and uploading the thousand photos from Angkor Wat onto the blog.  Unfortunately, the wifi here is pretty slow, so it took a very long time, and there were so many beautiful shots, it was very difficult to choose which ones to exclude!  Cornelia finally woke up at 21:30, but the sleep hadn’t done her temperature any good, as it was now to 103.9.  She had another big dose of Calpol, but was feeling quite good in herself.  She ate some of her penne pasta then just went back to the sofa, where we read some books to her until 22:45 when we went to bed.  She kept burping and I was on permanent alert that she might be sick, but thankfully that never happened.  She also had a small rash on the back of her neck, that we hoped was either a touch of sunburn or a mark from where her hair bobble had rubbed the nape, but we read up on dengue fever, zika virus etc and put our medical insurance by the door with a packed bag, just in case of a nighttime emergency!

I also decided to stay in with Cornelia, hoping she would have a good deep recovery sleep, and just in case things deteriorated during the night.

One thought on “The heat is on…”