I ended up in bed with poor old Bugsy again, whose temperature went up to just under 103 again at 01:00.  I didn’t want to risk it skyrocketing while I was asleep in the other room.  She was also wide awake, so we lay in bed cuddling and chatting until I gave her another dose of Calpol 45 minutes later, which helped settled her back to sleep.  She woke again at 04:00, having thrown herself  into the air and back onto the bed shouting “NO!”, waking herself up and saying to me “Don’t worry, it was just a dream.” and falling straight back to sleep!  She woke once more at 06:00, before sleeping through until nearly 10:00.  When she finally woke up, her temperature was down to normal, and she even said to me “You don’t need to take my temperature, Mummy, as my body feels completely cool.” What a relief! She was able to breathe properly through her nose, and although she still has a slight chesty cough, it is nowhere near as bad as it has been the last couple of days.

We made it down to breakfast fifteen minutes later, and we scoffed our usual melange of muesli, yoghurt, fruit and muffins, and lazed around at the table a bit, before heading upstairs and lazing around a bit more!  Cornelia wasn’t interested in going to the beach, and just wanted to stay by the pool, so although Ian and I would’ve been quite happy to go, we didn’t feel it necessary to force the issue, and after a couple of wasted hours in the room (I was reading a book on my Kindle and was totally engrossed) and Cornelia was watching her “Arty Galaxy” programme), we set ourselves up on some sun loungers and spent the rest of the afternoon relaxing in the sunshine, and playing in the pool.  Prior to leaving our apartment, Ian was tasked with putting suncream on Bugsy, who was busy dancing and making life difficult.  I won’t post it here, as Facebook would remove my post in its entirety for child nudity, but I have a very funny video of her dancing happily while Daddy is not looking so cheerful and trying to dab her with cream! 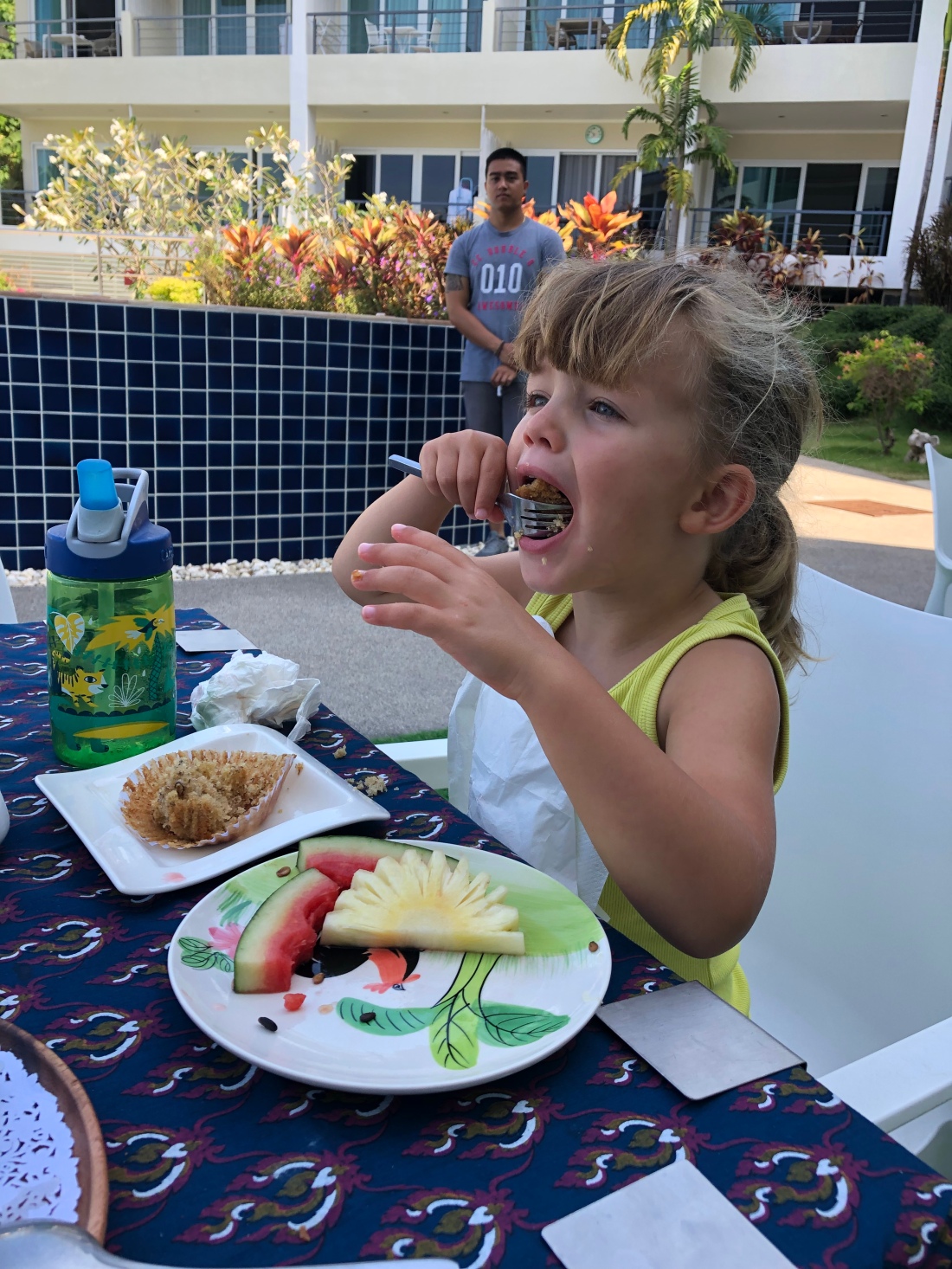 Cornelia was full of energy, and we were happy for her to exhaust herself, so she’d sleep well tonight, as we were booking ourselves onto a boat trip for tomorrow, which required an early start.  She went straight into the pool with Ian and spent ages climbing the steps to the higher pool, then jumping off the wall into the lower pool.  I was quite impressed with her bravery and confidence, as it was quite a high jump!

I wasn’t in the mood for any lunch, but Ian said he could manage something and thought that Cornelia should have more than a yoghurt (my suggestion) to keep her going, so at about 14:30, we heaved ourselves the five metres from our loungers to the restaurant table and while Cornelia had a grilled cheese sandwich and Ian had his tuna sandwich, I chomped on Bugsy’s chips and enjoyed a nice cold Diet Coke.  Neither Ian nor I enjoy just lying around, but we seem to have adjusted quite well to it over the last two enforced days of R&R! 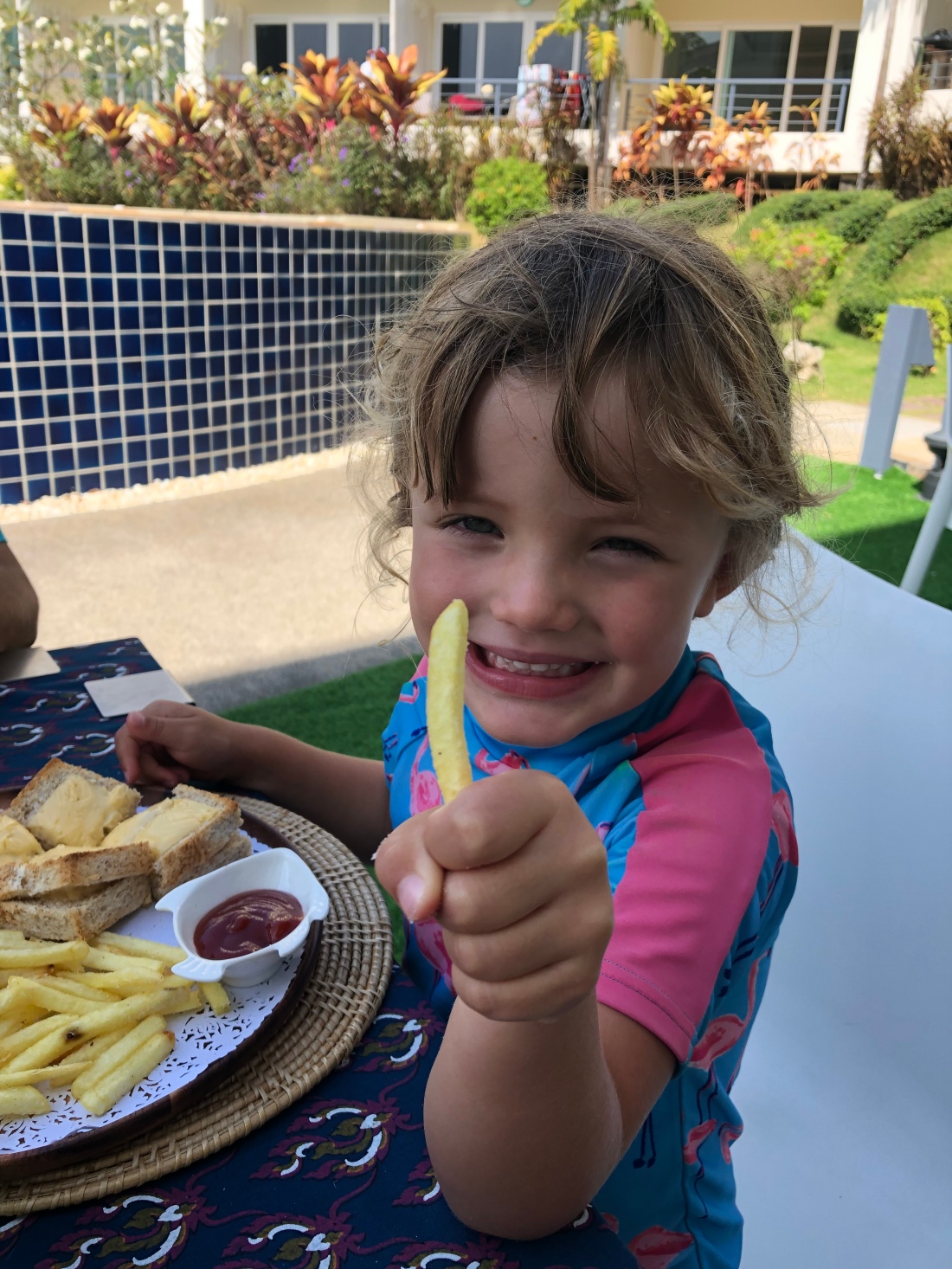 Straight after lunch, Cornelia wanted to go back in the pool so I took her in, and we played ball for a while until some mean Russian woman just decided to take it and play with her son instead (yes, really!!!).  (Cornelia had been jumping into the water from the top pool and I was throwing the ball for her to catch on the way down (unsuccessfully, I might add).  Of course, each time she missed, the ball would float off a bit, so once I knew that Cornelia was back in her depth, I swam off to retrieve it, which was only a couple of metres away each time.  This woman had been in the pool, right next to where we were playing, and her son was in the top pool.  Once Cornelia had jumped in and I’d helped her to the shallower water, I saw the woman swim towards the ball.  I just assumed that she was getting it to pass to me, so didn’t bother going for it myself… and she just picked it up, called for her son, and then started playing catch with him!  I couldn’t believe it! The bloody cheek of it!  Anyway, Cornelia was about to get upset, so I had to explain to her that it was a communal ball, meaning that anyone could play with it, but that I thought it was not a very nice way to behave, and if she had done it, I would be quite cross with her, and that other people just weren’t as nice as us.  I offered to get her bucket and spade for her to play with instead, but she was happy to carry on jumping in, and we practiced some underwater back somersaults too, before surfing back to Daddy on the other side of the pool.

We all lay on our loungers drying off (Bugsy in the shade, Ian and I in the sun!) until about 16:30 when we decided to head back upstairs and shower, ready for an early supper and bed. 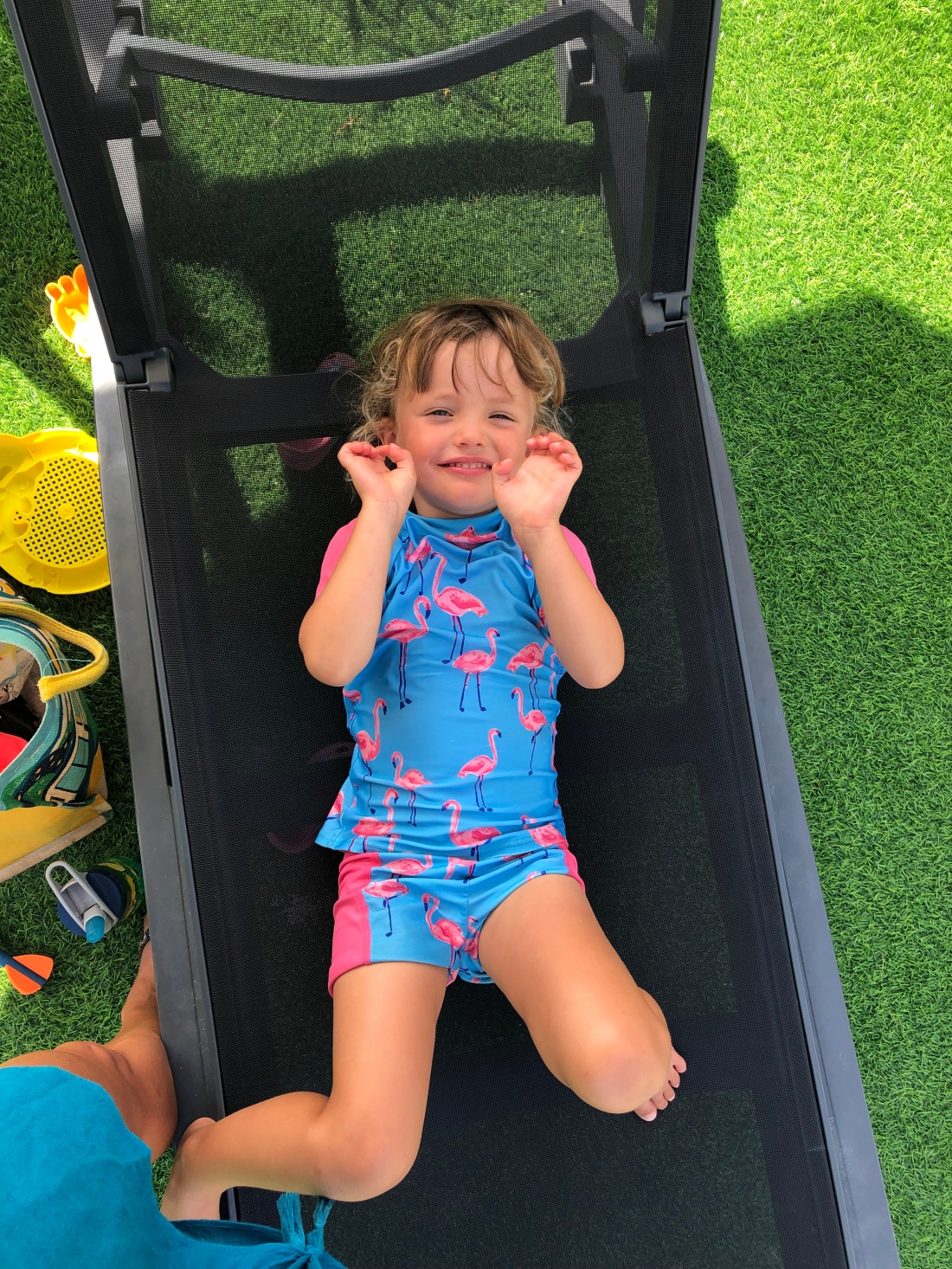 I decided to try and get a quick run in, and after some initial procrastination, set off for twenty minutes – a short run down to the seafront and along the pavement bordering the beach, before turning around and sweating my way back.  I even managed to run up the ridiculously steep hill, although I had to stop once and catch my breath. 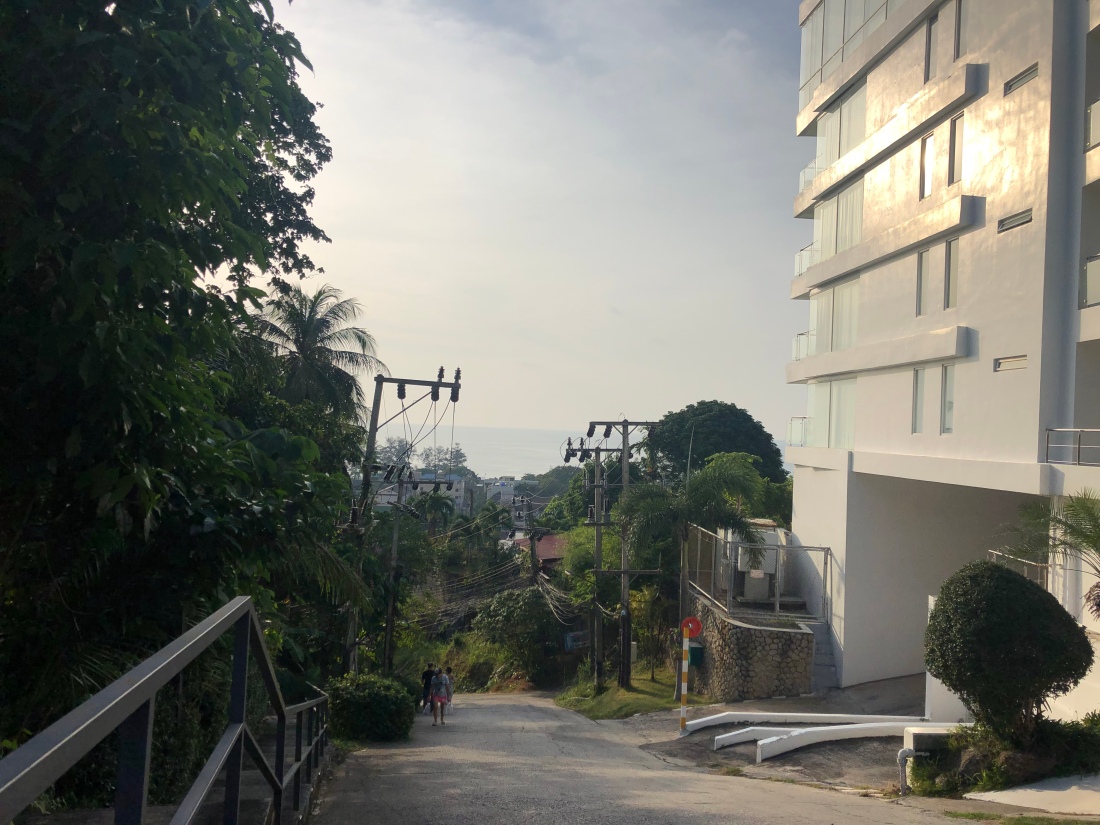 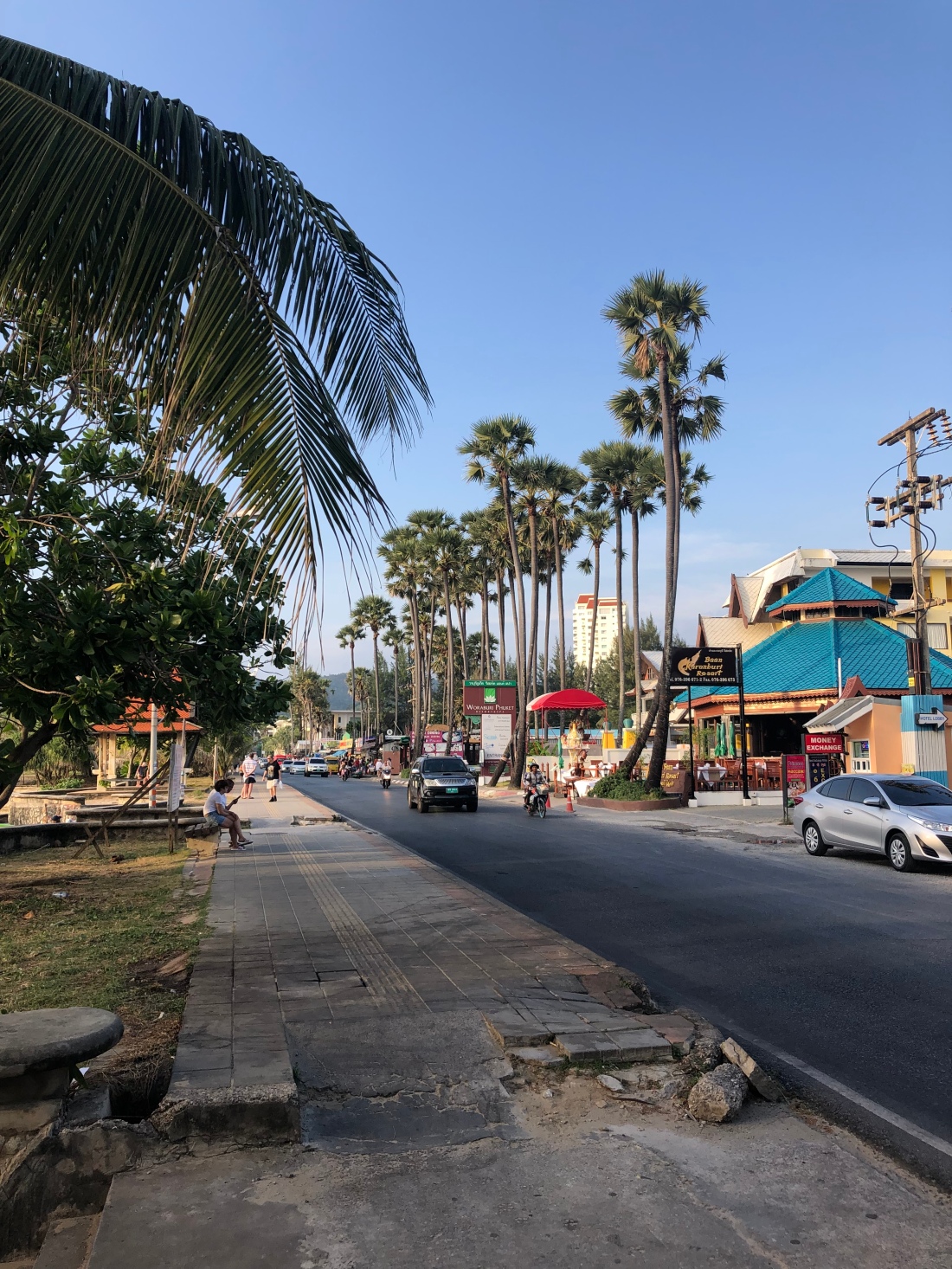 I was disgustingly sweaty by the time I’d finished my run, and immediately took a cold shower, to try and cool myself down. I had fifteen minutes to shower, dress and be in reception for the 18:00 shuttle bus, but the shower did little to help, and my dress stuck to me immediately! Ah well, at least we weren’t going anywhere smart for supper!!  I met Ian at reception, as he was already there arranging our check out for tomorrow evening as well as booking a taxi to the airport for Saturday morning.  We weren’t due to be back from the boat until 18:00, and with supper booked for 18:15 at EAT again, we had fifteen minutes to change, check out and walk down the hill.  It turned out that Mattia, the actual manager, as opposed to the chap who had emailed me on Tuesday during LaundryGate calling himself the General Manager, was very helpful, and told Ian that if reception was closed by the time we had finished supper, Ian could call him on his mobile and he would come to our room to check us out personally and return our £80 cash deposit.  I get the feeling that if I had made the approach, I would’ve just been told it was tough and if I wanted my £80, I’d have to be in reception during opening hours!

Anyway Tan, our cheery shuttle bus driver, agreed to drop us off at Red Chopsticks again, where we had another good table overlooking the mayhem of the road below us.  I’m afraid to say that I enjoyed my Thai chicken curry so much the first time we were here, that I ordered it again, and I wasn’t disappointed! 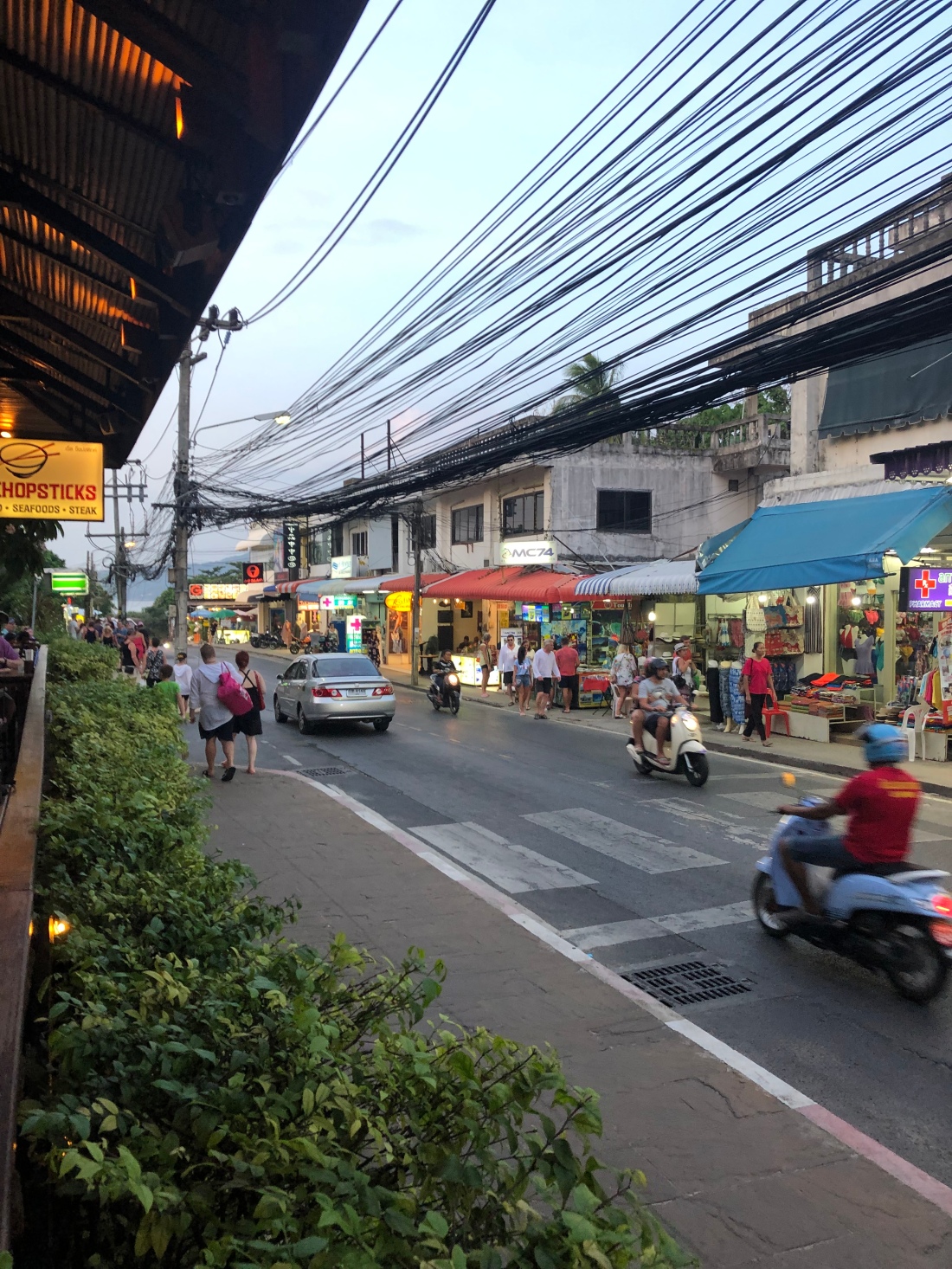 We had enough time after our meal to stop off at the mini mart for a couple of bottles of water, and withdraw enough cash to pay for our boat trip tomorrow morning (they only accept cash payments!), before plodding back to the Island View Hotel pick up point, where Cornelia was delighted to find her new friend, Emma, was also waiting for the shuttle with her family.

We sang some songs on the bus home and said our goodnights, before heading to our respective apartments.  Cornelia had a bit of a paddy about Daddy brushing her teeth, rather than Mummy, but I stayed out of it and they managed to resolve it without intervention. ;o) I went in for her bedtime stories, and we both said goodnight, before leaving the room with her agreement that she wouldn’t call out.  Hmmmm. Within five minutes, she was calling out for either of us, and once we’d established that nothing was wrong with her, we told her that we weren’t coming back in now, and she needed to sleep so that she would have lots of energy for tomorrow.

Back in the living room, Ian and I suddenly heard a loud noise and it sounded like heavy rain.  And sure enough, it was a torrential downpour.  We were very glad we weren’t stuck in town, and having to walk back to the pick up stop in the rain (although, to be fair, I looked as if I’d been in the rain anyway!).  In the meantime, Cornelia was still calling out variously for me and Ian, saying she needed a song to help her sleep, amongst other distractions.  She is currently chattering away to herself and it’s just gone 21:00.  That child!!  We need her to go to sleep, so she isn’t beastly tomorrow!  We shall see what happens!