It was an epic sleep from Cornelia (hardly surprising, given she didn’t go to sleep until about midnight), but as she woke up so late, I had to ask for a delayed checkout, so we could have some breakfast. I didn’t hear back from them, so assumed all was okay. Her face paint was almost perfectly in tact, but Ian met no resistance from her in the shower when washing it off. She was proud that she’d managed to look after it so well.

We didn’t really know where we would be staying, other than near Amsterdam or Den Haag, so set off on the final leg of adventure with a slight worry that we were looking for a needle in a haystack – a campsite with great reviews, a swimming pool, near a beach, near Amsterdam, preferably with a shop and a restaurant…on the main holiday weekend of July. Finding a campsite that met all of those requirements was hard enough, but I was particularly concerned about the busy holiday period. The first campsite I rang almost laughed when I asked for a pitch for four nights, and I carried on researching, until eventually I found another one that was further away from the beach (but only 5kms, so totally doable) but actually had availability and good reviews!

Accommodation booked, sat nav loaded, and we continued on the long journey.  Germany has largely been made up of roadworks.  Lots and lots of roadworks and traffic jams.  Anyway, this gave me some time to catch up some life admin, and chase the Legoland hotel for news of the Fire Phone, which eventually came.  They had found it!  All I had to do was arrange for the postage label to be emailed to the hotel, and they would pack it up and send it to me in the UK.  The Danish postal website is straightforward.  If you speak Danish fluently.  I struggled my way through, and probably massively overpaid, but I wanted to be absolutely sure that the Kindle would be there during our short stop back home.  I sent the label on to the hotel reception, who then confirmed that it was all wrapped up, labelled and would be sent that day.  Thank God!  Cornelia took it all in her stride, completely surprising me (in a good way) and instead had my iPhone for an hour, handing it back to me without complaint at the end of her time.

We stopped off for lunch and a play at a service station, before we continued on, finally arriving at our campsite, Konigshof, at about 18:00.  We are delighted with the choice (not that we particularly had one!). There is an outdoor pool, an indoor pool and a toddler pool with slides and fountains. There is a restaurant, snack bar, bar, supermarket and kids’ club, and our pitch is flat and generously sized.

Cornelia really really wanted to go swimming, so I agreed with Ian that I would take her to the pool while he set up the tent awning. I must say, Bugsy was great at sticking to our arrangement that we needed to be out of the pool by 18:45, so we could go to the restaurant for supper, and we met up with Daddy back at the tent, hungry for food, just before 19:00. 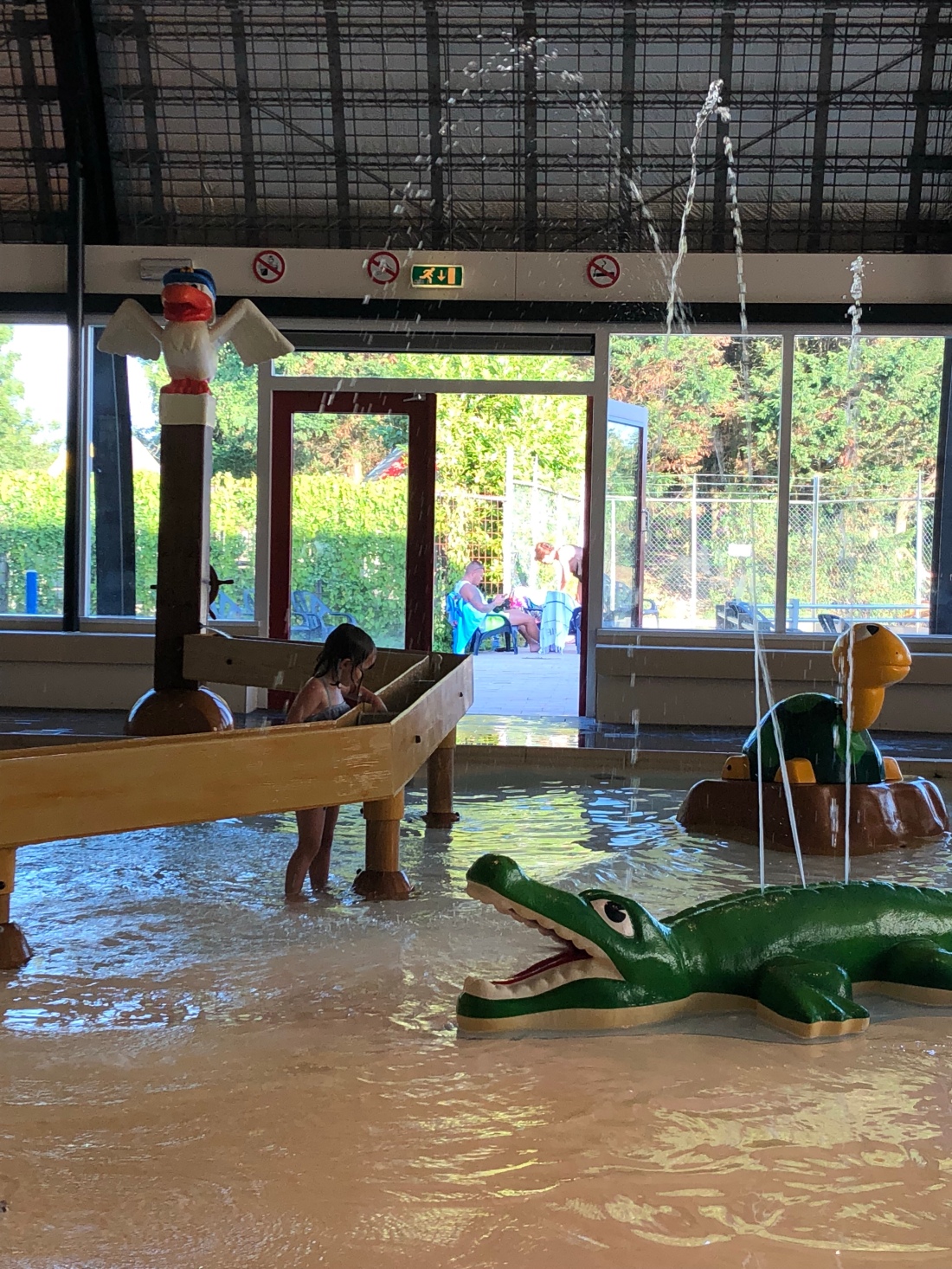 The restaurant’s last orders were at 20:30, and it was just after 20:00, so we had plenty of time for a leisurely decision. I went for salmon teriyaki and Ian opted for Thai beef. Cornelia was more adventurous than usual and chose a “croquette” and we all crossed our fingers and hoped for the best! Unfortunately when my dish arrived, it was smothered with mushrooms (who puts mushrooms with salmon ffs??!!) so Ian and I swapped. And what a swap! The beef was delicious! Still pink and tender, just how it should be. Yum. Cornelia ate all of her croquette (stuffed with pork, as it happens) despite initially declaring it was “yeuch” and that she was just going to eat chips.  The staff there were incredibly friendly, especially towards Cornelia, rewarding her with THREE toys for eating all of her tea and, even better, none of them involved sweets or chocolates – they were all games for her to play with.

She was exhausted again, and it was another late night for her, but she went to bed with no problem and was fast asleep straightaway.  It was fairly late for me and Ian too, so we surfed the net a bit and then curled up in our tent – our home for the last few nights of our Europe trip. 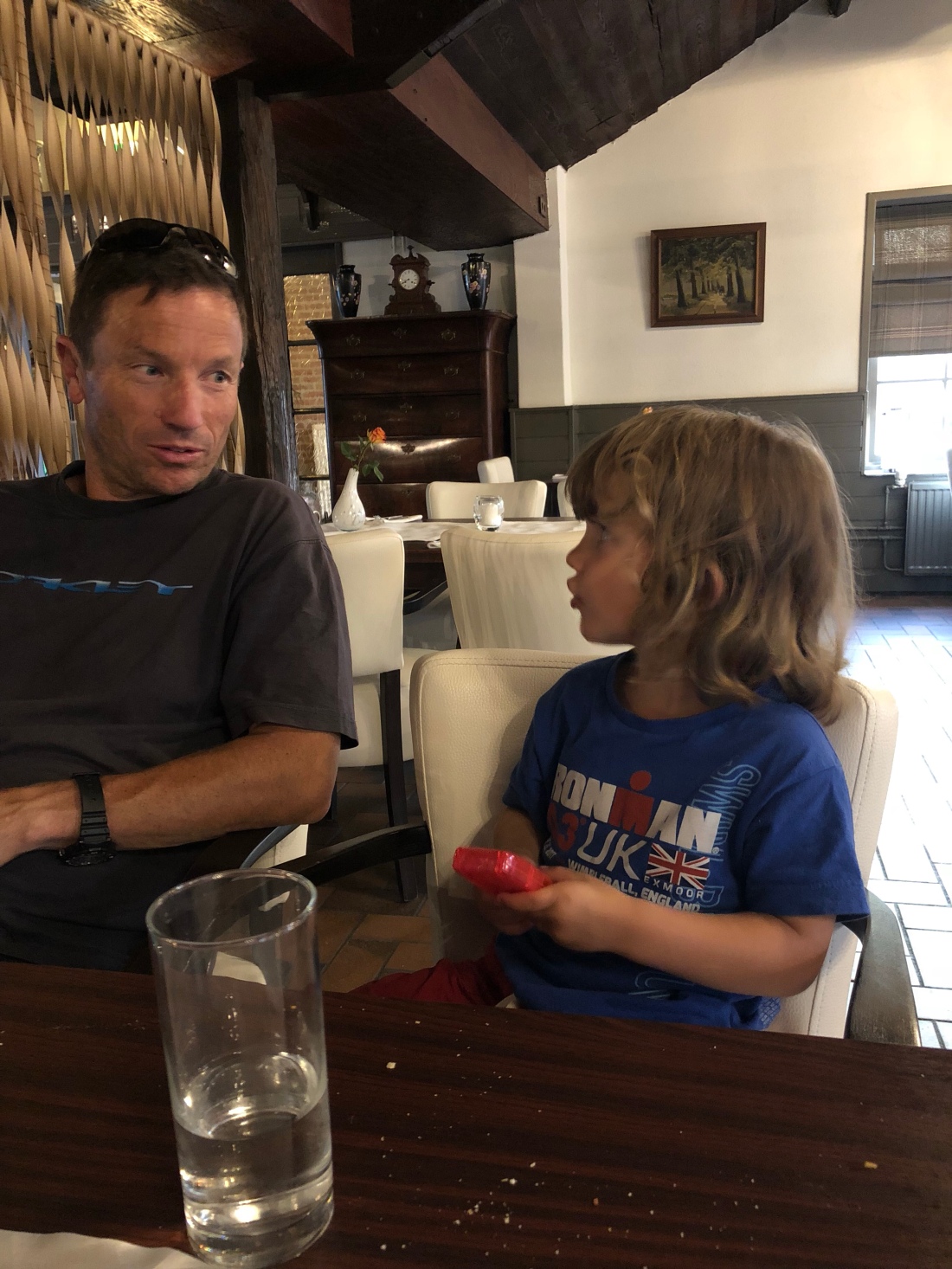