I slept really well despite a really weird dream about twin men who had recreated their grandmother from body parts of other people they’d murdered. Loads more to it, but who wants that much insight into my mind?!!!

Cornelia was asleep when we rose, and I volunteered to stroll down to supermarket for breakfast supplies. It’s really well-stocked, with plenty of choice, and decent value too.

Bugsy was still asleep when I returned from the shop, and as it was nearly 10:00, I decided to wake her up. 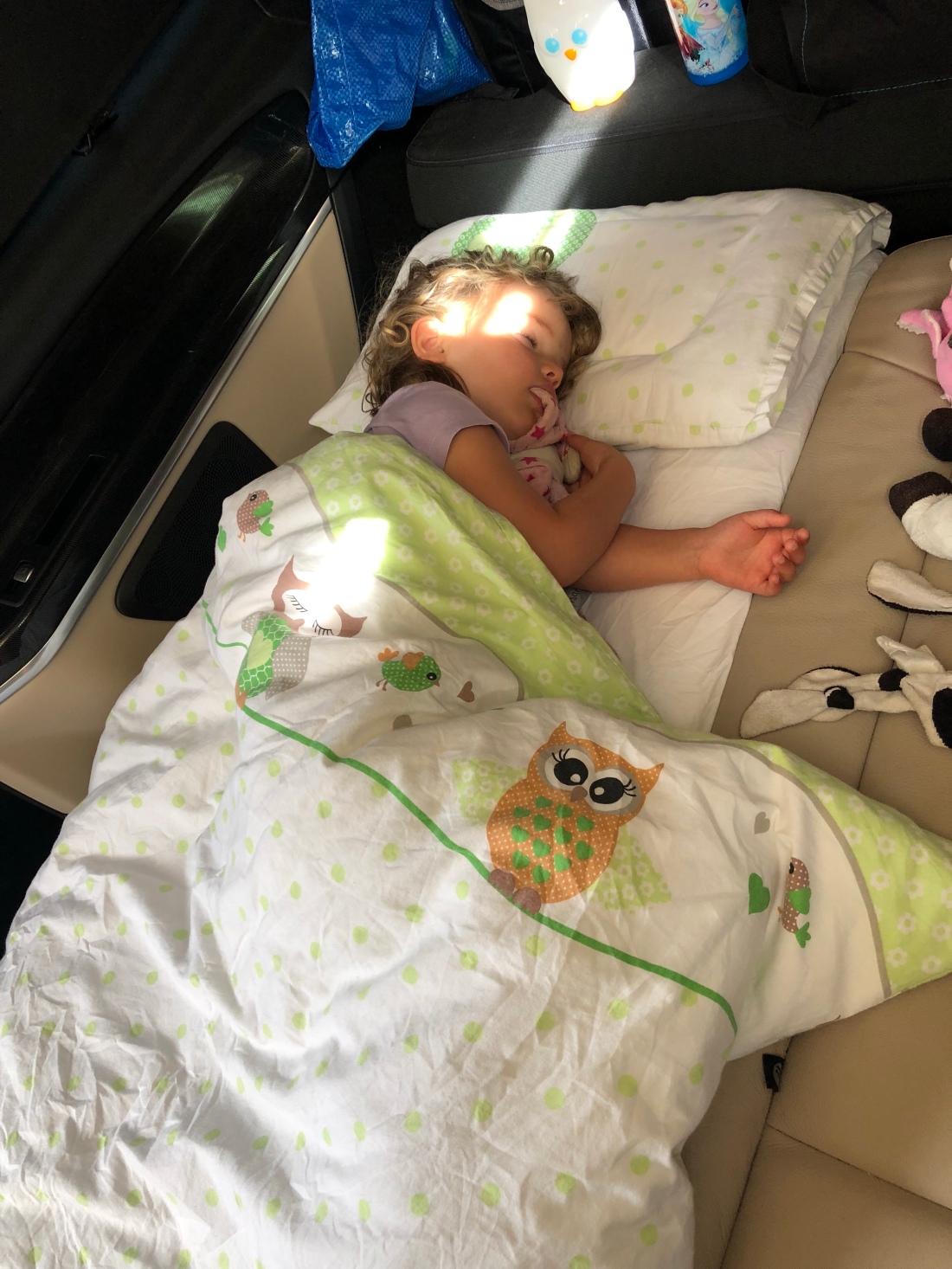 Despite being disturbed, she woke in a gorgeous mood, singing and chattering away merrily. I had bought a pain au chocolat for her breakfast, and she happily chomped her way through it, licking all the chocolate from the middle as only a toddler could!

After a good breakfast, Ian went off to do the washing up, while Cornelia cycled next to me in search of the washing machine. I found a room marked “laundromat” in four different languages and duly loaded up the washing machine with our clothes. It was all a bit peculiar – I had to plug in the cable and there were no clear instructions for use. I legged it over to reception to ask for help, and consequently discovered that that was the staff laundry and that the guest laundry was adjacent to reception. Unloaded first washing machine, reloaded the correct one, pushed green button. Hurrah, 46 minutes to kill!

As Cornelia was still on her bike, we went to explore the campsite a bit, finding an “outdoor gym” next door to the fishing lake, and we spent nearly an hour testing out all the different machines, and seeing who could get dizziest by spinning round and round without holding in. It wasn’t a competition I was keen to win and Ian was happy with his “cheap beer” win of five full spins. 🤢Some nettles stung Cornelia, which Daddy quickly fixed with some dock leaves, but we managed to avoid any other toddler disasters – no more splinters, no falling off or getting tangled up in the machines. Parenting win!

Once back at the tent, we brushed our teeth and hair, and dressed for the day… swimsuits and shorts – it is gloriously hot here, and as soon as we’d hung up the laundry on our makeshift washing lines (string attached to various parts of the hedge and tent awning), it was time to meander to the pool. Ian and I were both hoping for a bit of sunshine, but the indoor pools are so much with their slides and fountains etc, it was hard to persuade her into the outdoor pool. So, I stayed out in the sunshine, while Ian took her inside for a splash around. I swapped over after about half an hour, but not before watching her accidentally do a sort of somersault into the pool (instead of a dive) which she then wanted to perfect. She’s so funny – hates loud noises, but loves accidentally turning upside down in the pool! When I took over, she wanted to show me how she could go down the tunnel slide into the pool (which she had refused to try yesterday on account of being too scared), so half an hour of Daddy time had really been amazing! She likes me swimming underwater with her, so I asked her to swim to me (using her arms and legs – no float) and then we dived down and swam back to the wall.

She would’ve happily stayed in the pool all day, but there is a kids’ club here, and the “meet and greet” with the animation team was at 15:15. I went to it with Cornelia while Ian returned to the tent for a late sandwich lunch. I think I had set my expectations a little high… we walked in and there were lots of tables set up with lots of different activities, a bouncy castle and a table tennis set. But no greeting took place at all! I looked around, staring directly at the hosts who seemed to avert their eyes. Hmmm. I tried to keep it positive, but I was a bit annoyed!! Anyway, we sat ourselves down at a table briefly, before Rose (who did eventually introduce herself to Cornelia) asked her if she would like her face painted. Obviously, her answer was an excited yes! Rose baffled her a bit by asking he what she wanted, and good old Bugsy replied “What can I have?!” After much consideration, she decided on a red flower on her cheek. It wasn’t quite Legoland standard, but then it was free and therefore not Legoland prices!

Abandoned once more, we settled back down at another table, with a box of loom bands (I think that’s what it’s called?). I stopped another cheery team member (I say that with slight sarcasm) and asked her what we do with them. She showed me and walked off. So I cracked on with a bracelet for Bugsy while she just stacked bands onto a loom stick. There was a little bit opposite us who had made an amazing length of loom bands, so I copied him as he was just using his fingers to hold the bands and “knot” them. Much quicker! In no time at all, Cornelia had a matching necklace.

Ian turned up with a sandwich for the toddler (I had had a late breakfast and didn’t fancy an unnecessary meal) and once she’d eaten it, she had some additional energy for trying out table tennis (hopeless, I’m afraid) and bouncing on the bouncy castle (much better!). 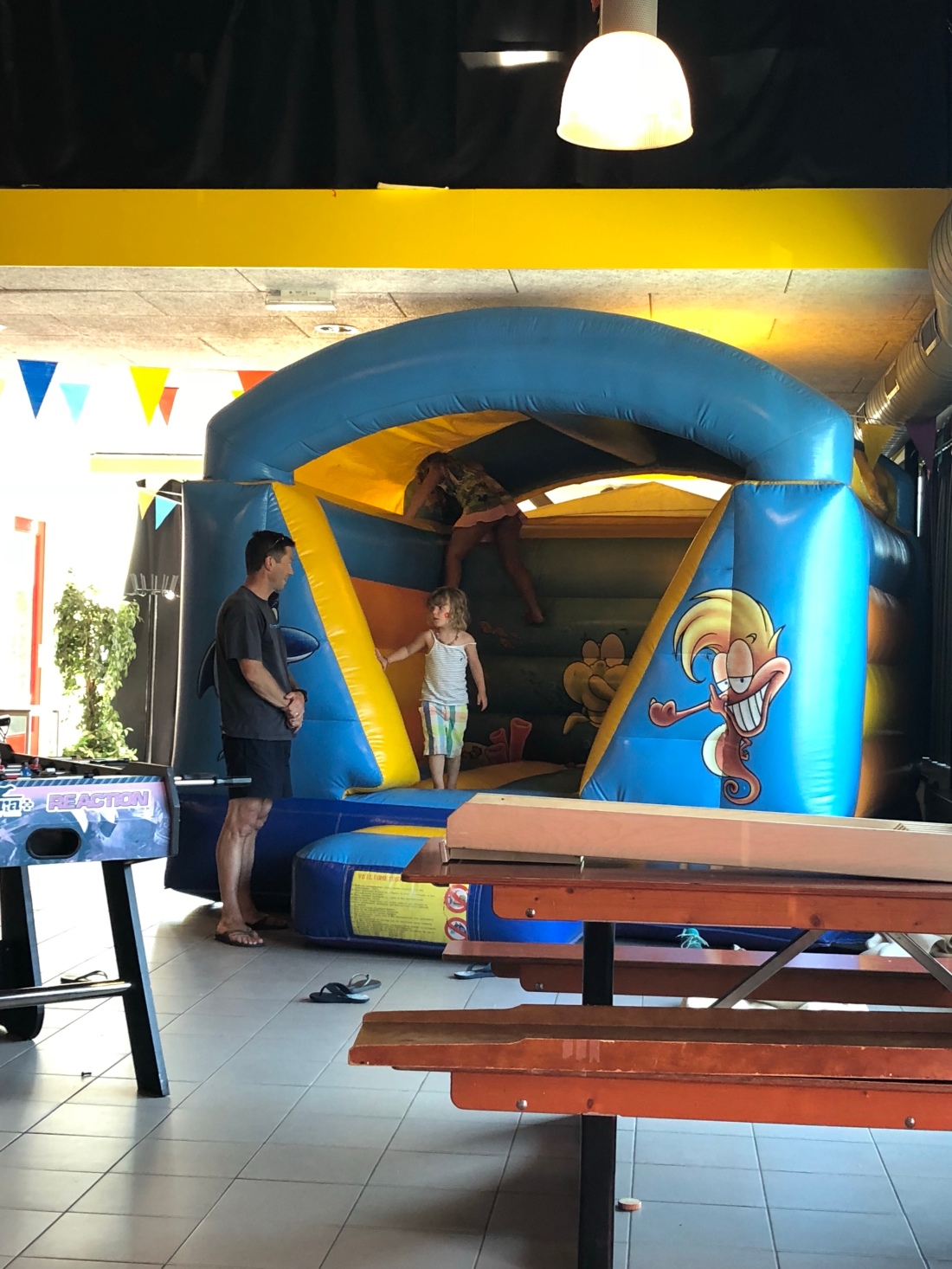 As we had to go to the supermarket for food, we persuaded her out of kids’ club and onto the bike for a ride to the nearby Lidl. Cornelia wheeled the basket around while I grabbed milk etc, all the while muttering menu plans to myself.

We cycled back to our tent and I cracked open a cold beer from the fridge, and cooked up our sausages, beans and mash supper, while Ian and Bugsy showered. Cornelia didn’t waste too much time eating tonight, as it was the mini disco at 19:00, and the “bus” that collects the children to take them off for an hour had already passed us, blaring out toddler music. As soon as she’d finished, Ian took her off to the disco while I showered and washed up. I joined them for the final few minutes then left them again when Ian took her off to the playpark.

I was starting to wonder where they were, as it was well after 20:00 (and I had thought we were planning on her getting to bed at a decent hour) and so thought I’d go to the loo and then hunt them down. As I did, I saw Bugsy charging out of the park with no Daddy in tow. I asked her where he was to be told “He said that if I kicked him one more time, he was leaving. And I kicked him, so he left. I just stayed there having a meltdown and lying in the grass. But I’m ready to say sorry now.” I just adore these long explanations of hers!

I carried on chatting to her, doing the usual spiel of how hitting and kicking isn’t okay, wondering where on Earth Ian was. After about five minutes, he appeared, looking slightly worried. I struggled to not get cross with him for “losing her”. He said that he hadn’t left her, he’d just moved out of sight and could see her the whole time…. until she just disappeared! 🙄Anyway, she then apologised for kicking him and having a paddy, and we all went back to the tent together.

Bedtime for Cornelia followed pretty quickly, and Ian and I sat outside until was too dark to see clearly, and crawled into our tent for the night.