We got off to a good start today: the thought of a second trip to Legoland was enough to spur Cornelia into action, and she ate her granola more quickly than any other morning so far, as we plotted out our day so we could accommodate all the rides we still wanted to go on (or revisit!).

We packed up and checked out with no problems, and found our way to one of the many Legoland car parks, luckily finding a spot that gave Bluebell a bit of shade for the day.

We already knew where we were going, and felt very organised as we traipsed off through the park to revisit a couple of favourites from yesterday, which we knew would have long queues. But first, it was off to the Lego Canoes and we huddled in together in our boat, nervously anticipating the soaking we had been guaranteed. Thankfully, apart from Ian’s backside, we all stayed remarkably dry and put this down to the three larger folk in front of us bearing most of the deluge!

Cornelia has been excellent waiting in the long queues, entertaining herself by building Lego towers and clambering along the rails.  We had a short wait for the Pirate Boats, which was a leisurely cruise around the river, watching out for crocodiles snapping at Lego men dangling off bridges, sharks patrolling the waters, and pirates with their treasure chests in the caves.  An enormous amount of thought and patience has clearly gone into every detail of Legoland! 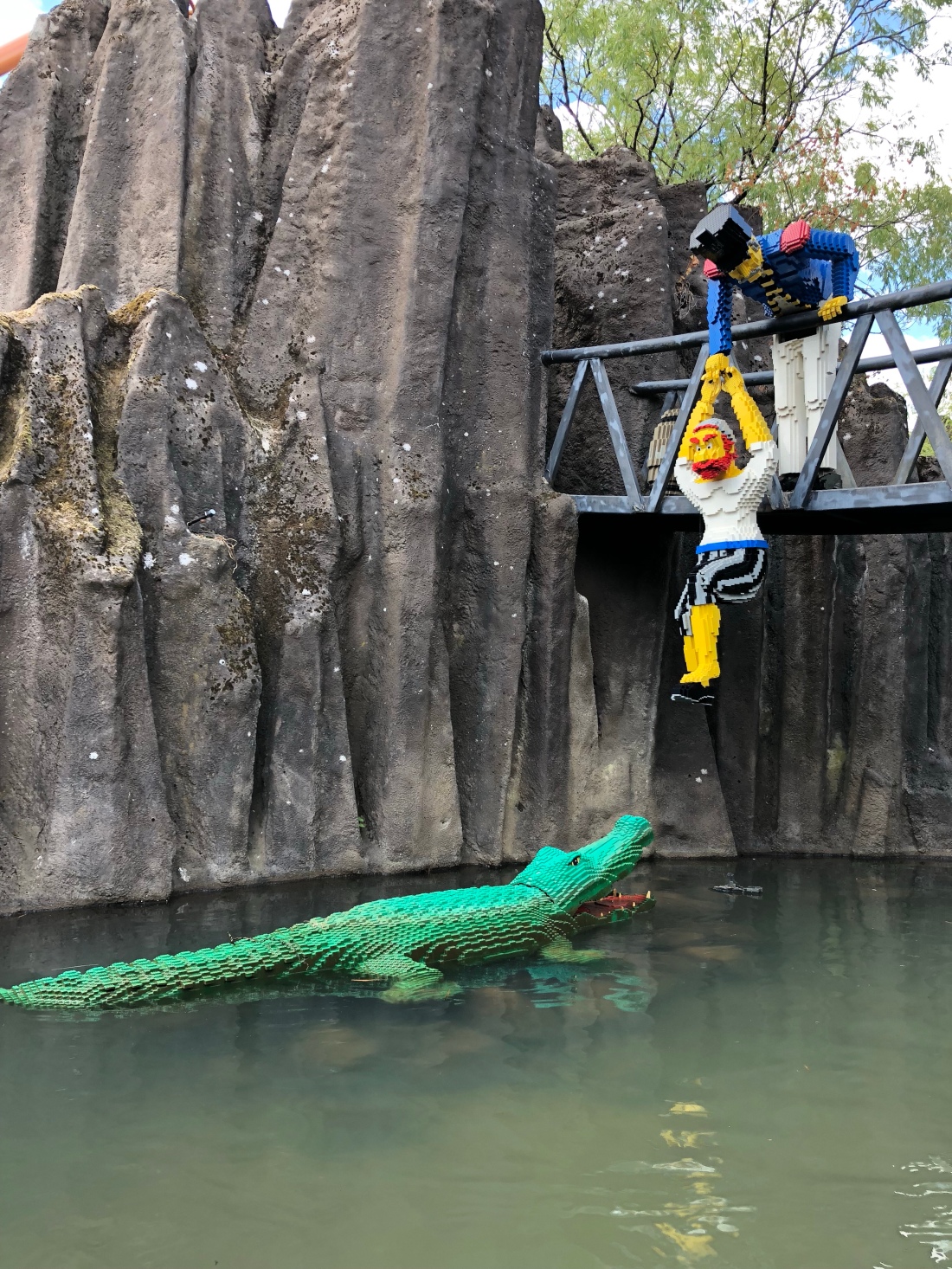 I had promised Bugsy yesterday that she could have her face painted, and actually we had both forgotten for the first hour or so, but she suddenly remembered and chose a rainbow with sparkly flowers. She was ever so good and sat perfectly still as her face was adorned. And looked so cute afterwards! She was thrilled and has been so careful with it all day, so as to not spoil it.  I had to clip her fringe back to keep it off her face (at her request) and it felt strange to see her whole face so exposed! 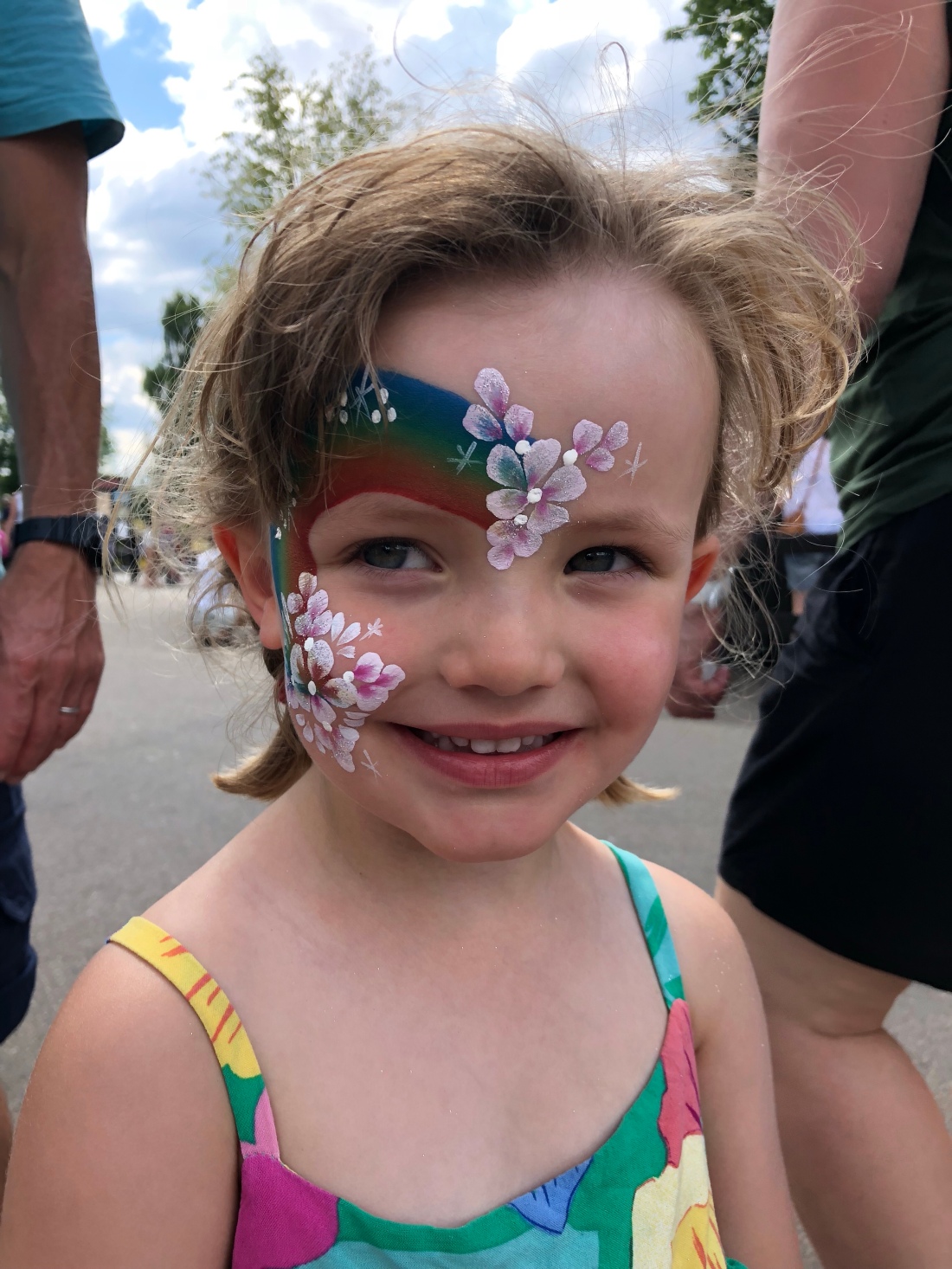 Ian went to investigate Miniland in more detail, while Bugsy and I sweated out a lengthy wait for her second go on The Flying Eagle, delayed further by a “technical issue” which turned out to be the code words for “someone’s thrown up on the rollercoaster”.  It put out three carriages, but luckily, Cornelia and I managed to bag the first carriage, at the opposite end of the stinky ones!  We kept an eye out for Daddy, but unfortunately he just missed it. Obviously having far too much time looking at the miniature models!

Having spent the morning in queues, it was time for lunch and rather than waste energy (and precious time) trying to decide what to have, we went straight for yesterday’s venue for exactly the same meal again.

Next up was the Caterpillar (a spinning train – one for Ian, definitely not me, especially just after lunch), followed by the ride of the park: Frog Hopper, which slowly lifted the children up into the air, then swiftly dropped them back down again.  Cornelia shrieked with laughter the whole time, and jumped off yelling “Ribbit ribbit” over and over again.  Brilliant!

She then wanted Ian to go on the Lighthouse that I’d been on with her yesterday, and after that, it was the Zoo Safari where she made a new friend in the queue, Evie, and her outrageously good-looking mum.  Again, the detail was incredible: zebras, giraffe, elephants, flamingoes – you name it, if it’s in Africa, it was there! 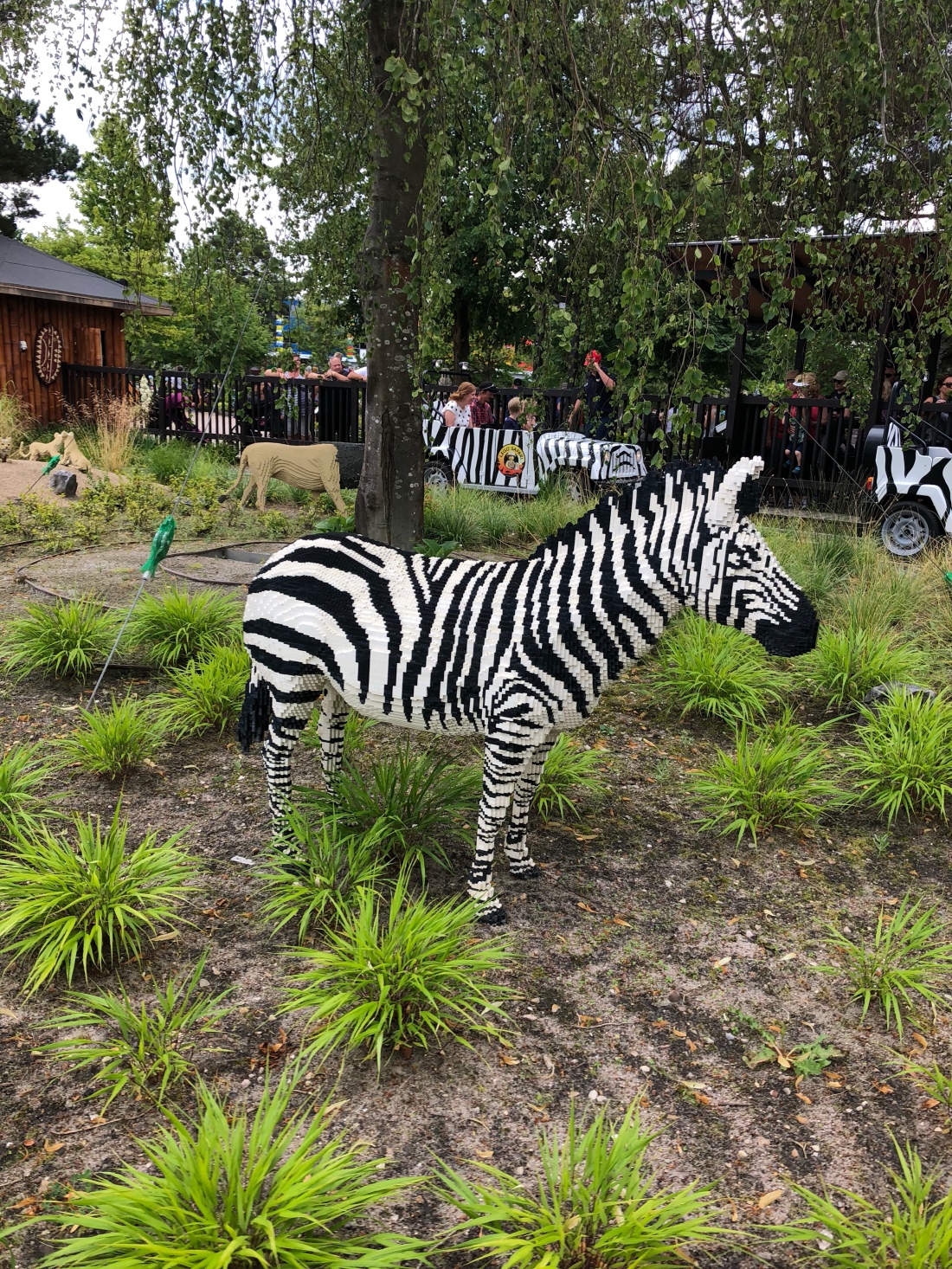 Having waved goodbye to Evie, we ambled through Miniland again, with Ian pointing out all the things he thought would be interesting or fun for Cornelia, including Neuschwanstein Castle (which we had visited in Germany) and an excellent replica of Bergen which included the same market in which we’d enjoyed our fish lunch. 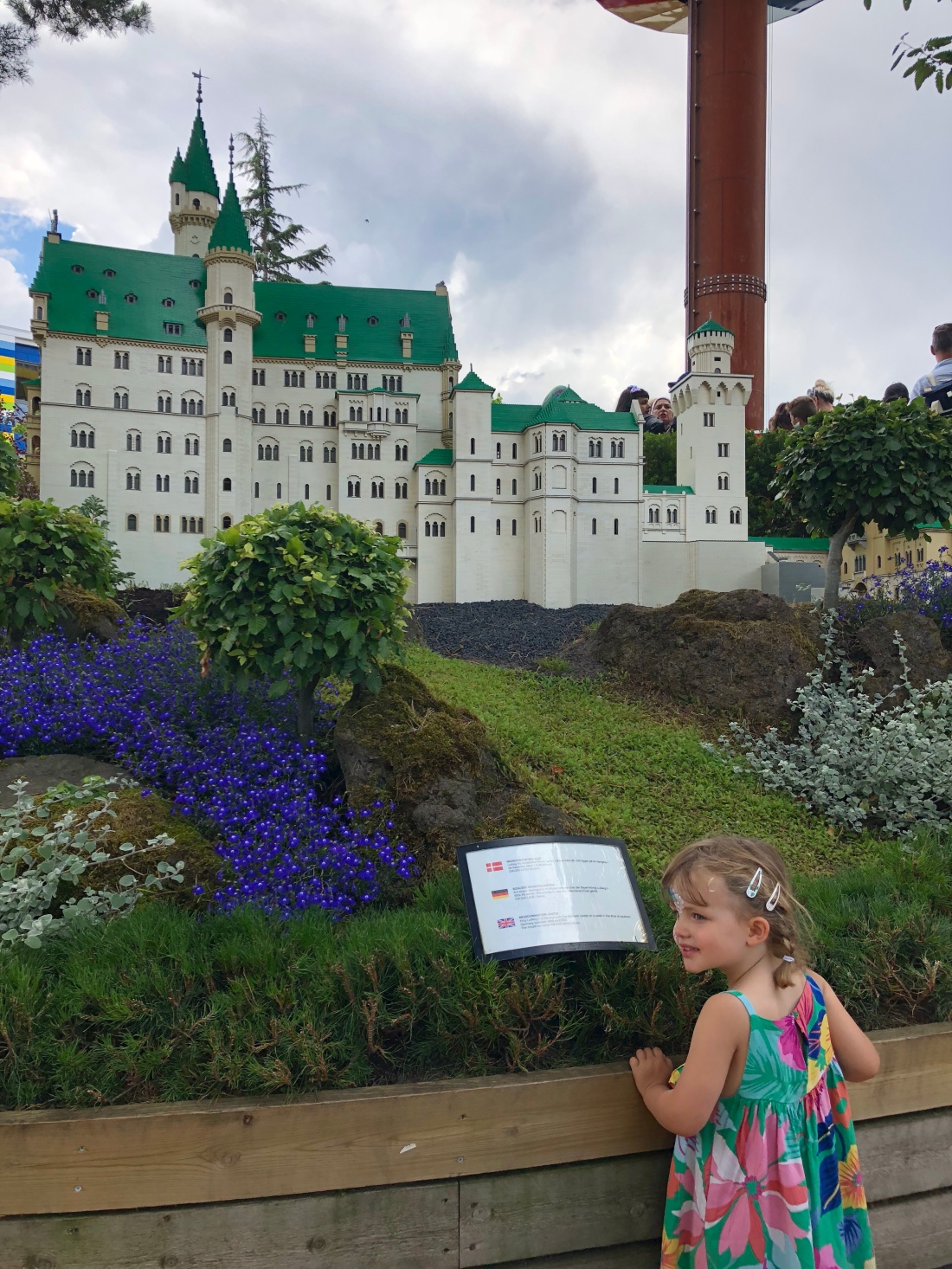 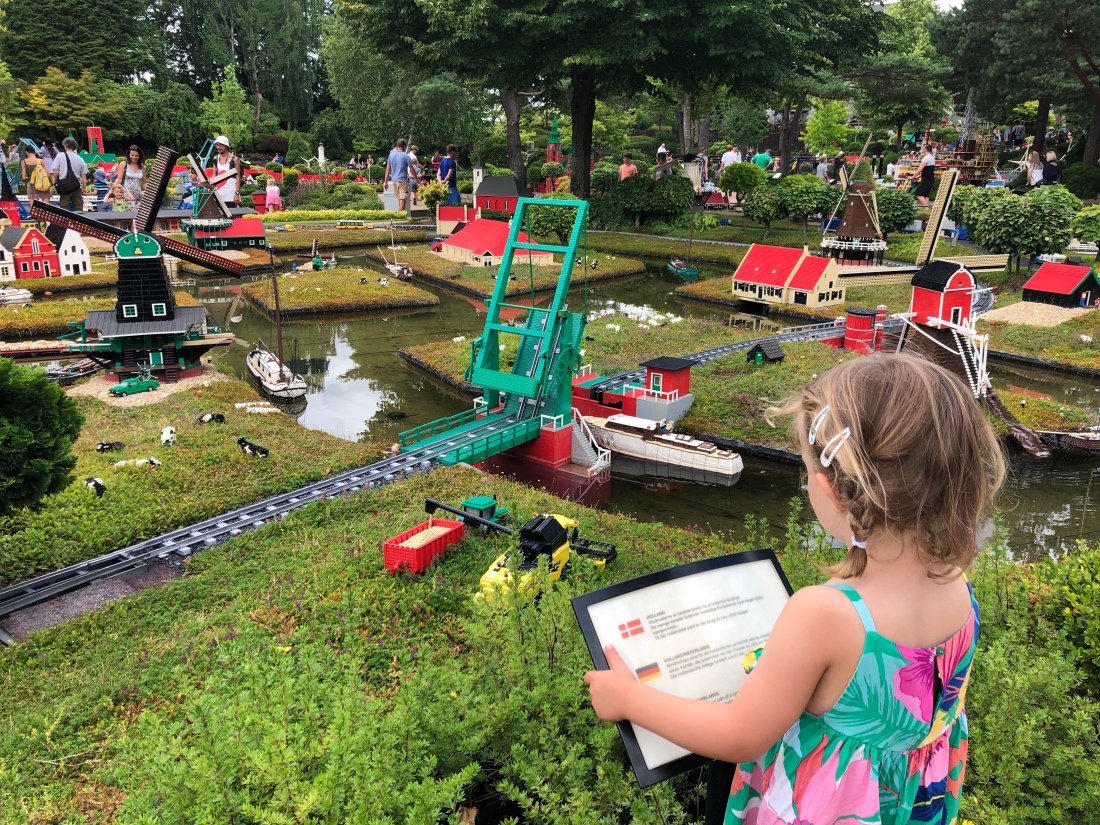 We made it over to the area “Ninjango” for an extraordinary ride that we just weren’t expecting.  All of the instructions were apparently on posters on the walls where you queue, but as there was no queue, we just walked straight through oblivious.  Anyway, it turns out, it is a 3D ride, so you are trying to dispose of your opponents (Ninja-like characters) who are running towards you, by using hand gestures.  I didn’t pick this up for some time, and that’s the only reason Ian won.  Otherwise, Bugsy and I would’ve kicked his ass, for sure.  (Not that Cornelia was any help, sitting there with her hands over her ears for the entire ride.)  Afterwards, she said she loved it and didn’t mind the loud music, as she was quite happy covering her ears…. strange child. 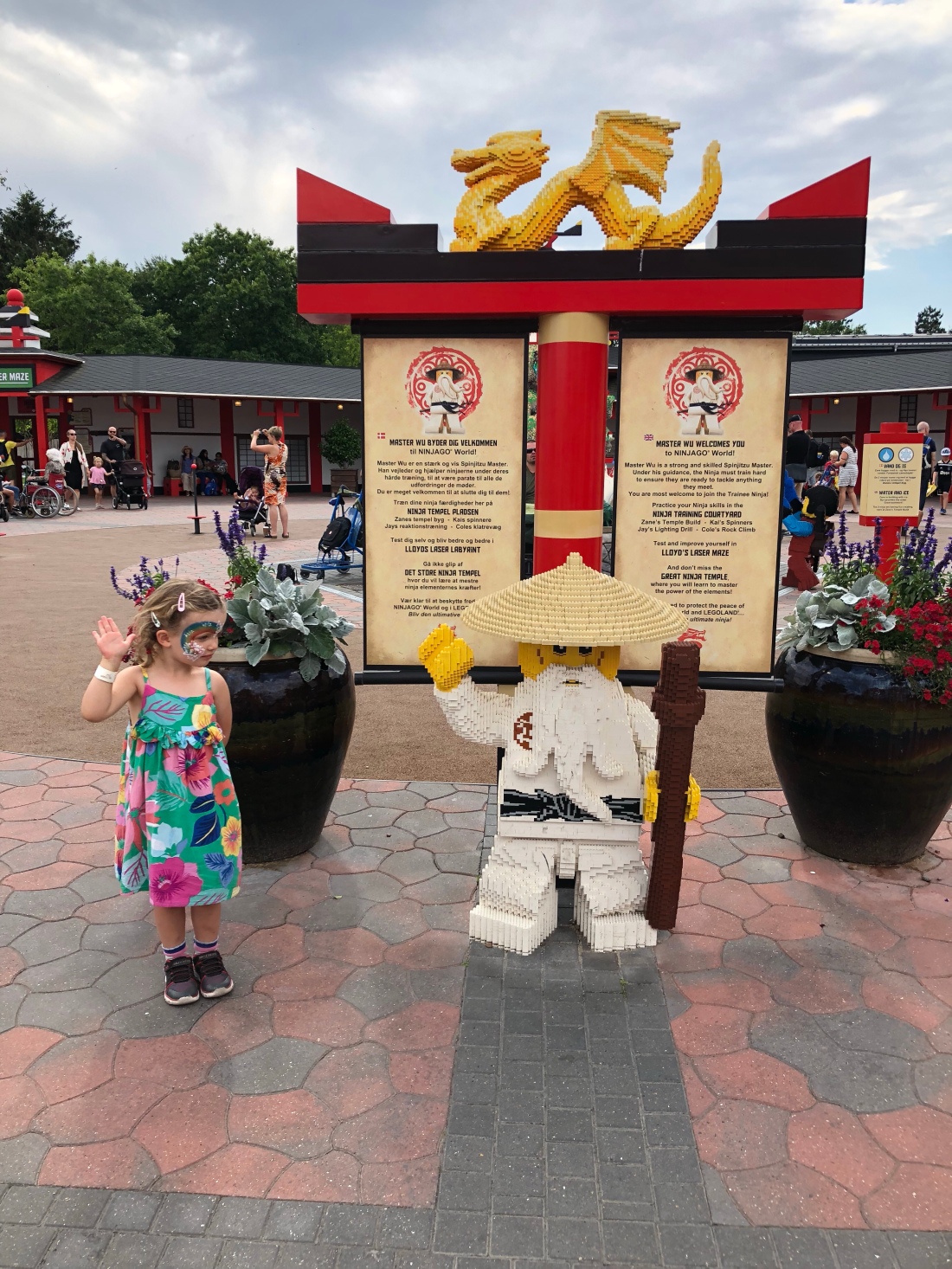 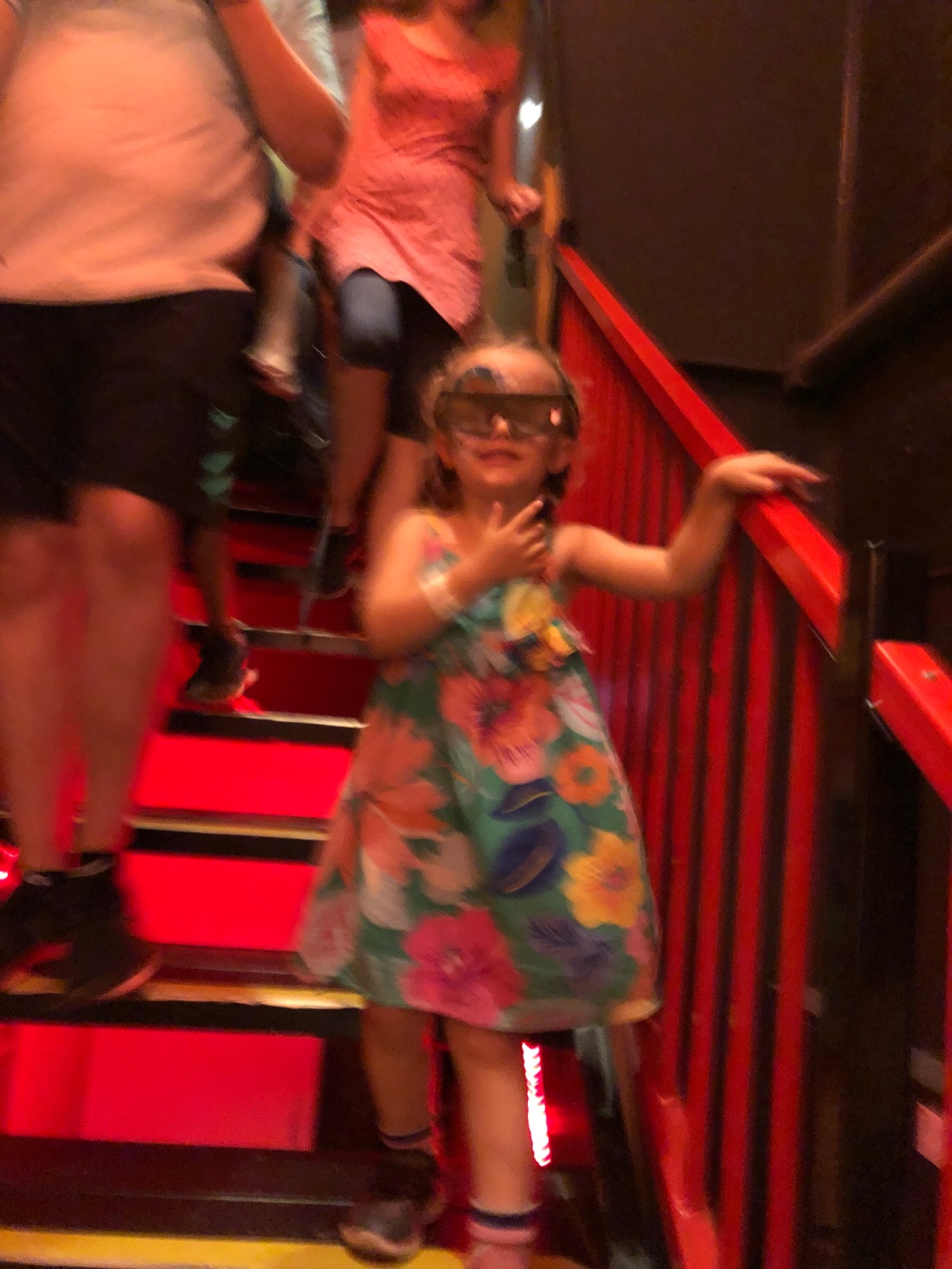 The one thing she didn’t really like was the Lego lion defending Ninjago.  She put her head inside the lion, so I could take a photo of her in the lion’s mouth, but when she roared, it roared back unexpectedly and gave her the fright of her life.  And us, the laugh of the day…! 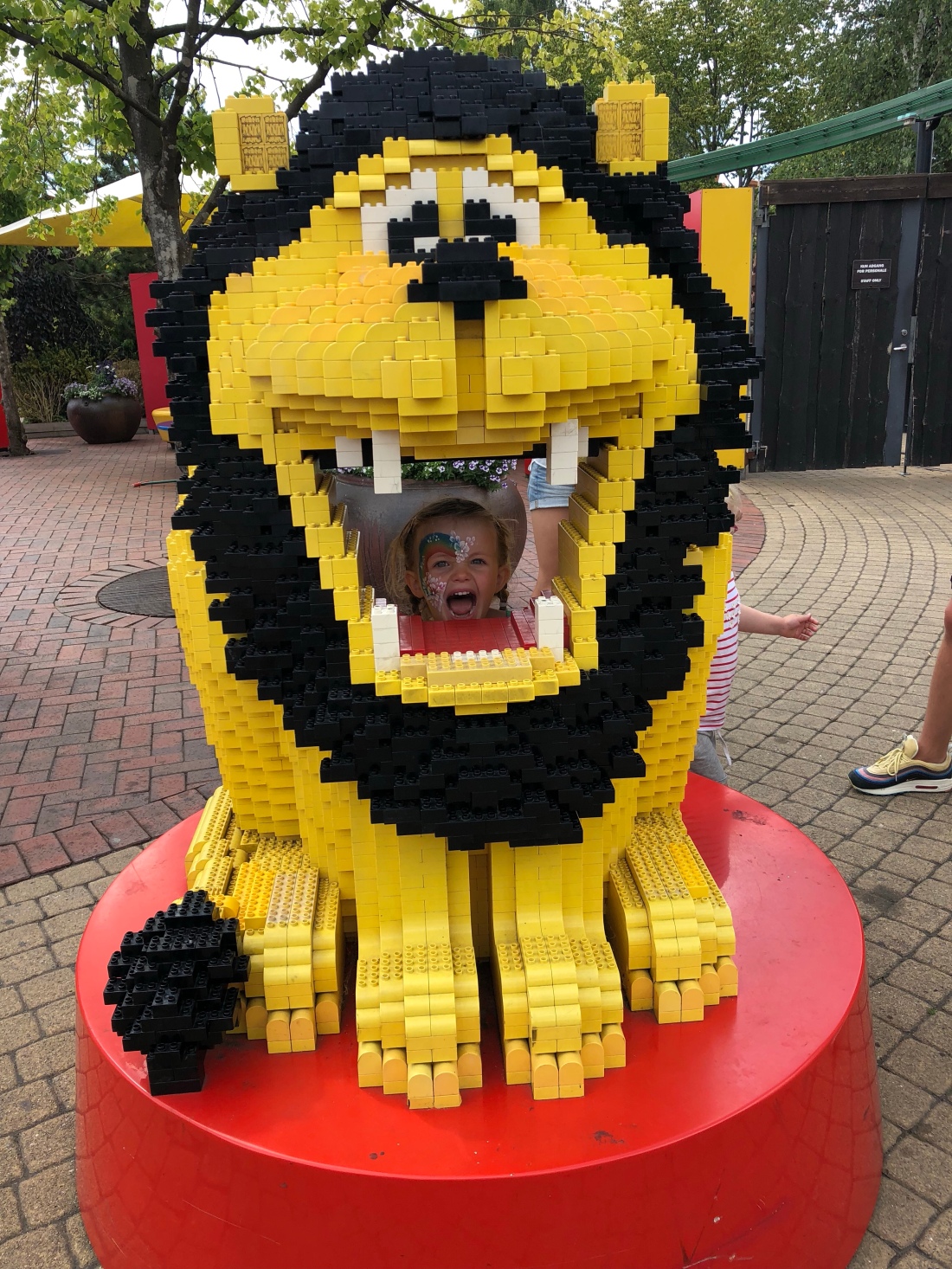 We were keeping an eye on the threatening clouds, and we agreed we should maybe try for an indoor ride now, which was perfect timing on our part, as it suddenly started to pour with rain.  Not just light drizzle, or squally rain – a full on downpouring of thick, heavy raindrops.  People were completely caught out, as we smugly donned our raincoats, feeling terribly British.

Atlantis was worth being inside for, whether it had been raining or not.  It is a very interactive aquarium, where kids can crawl under some of the tanks and insert their heads into a bowl in the tank.  There were also cameras, like an endoscope, that children could use to investigate the creatures more closely, but most of the kids, including Cornelia, were using them to get their own faces up on the screens… 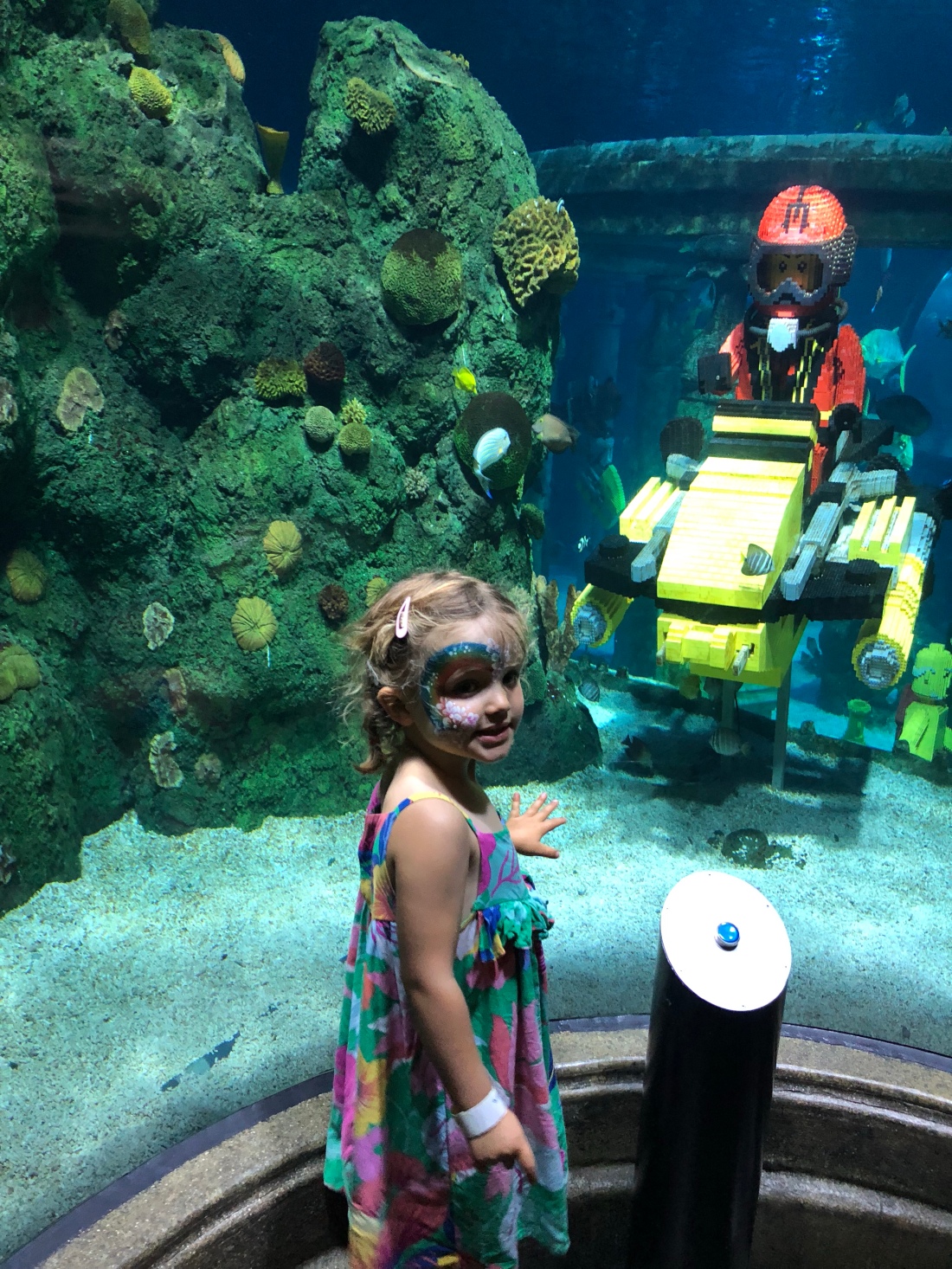 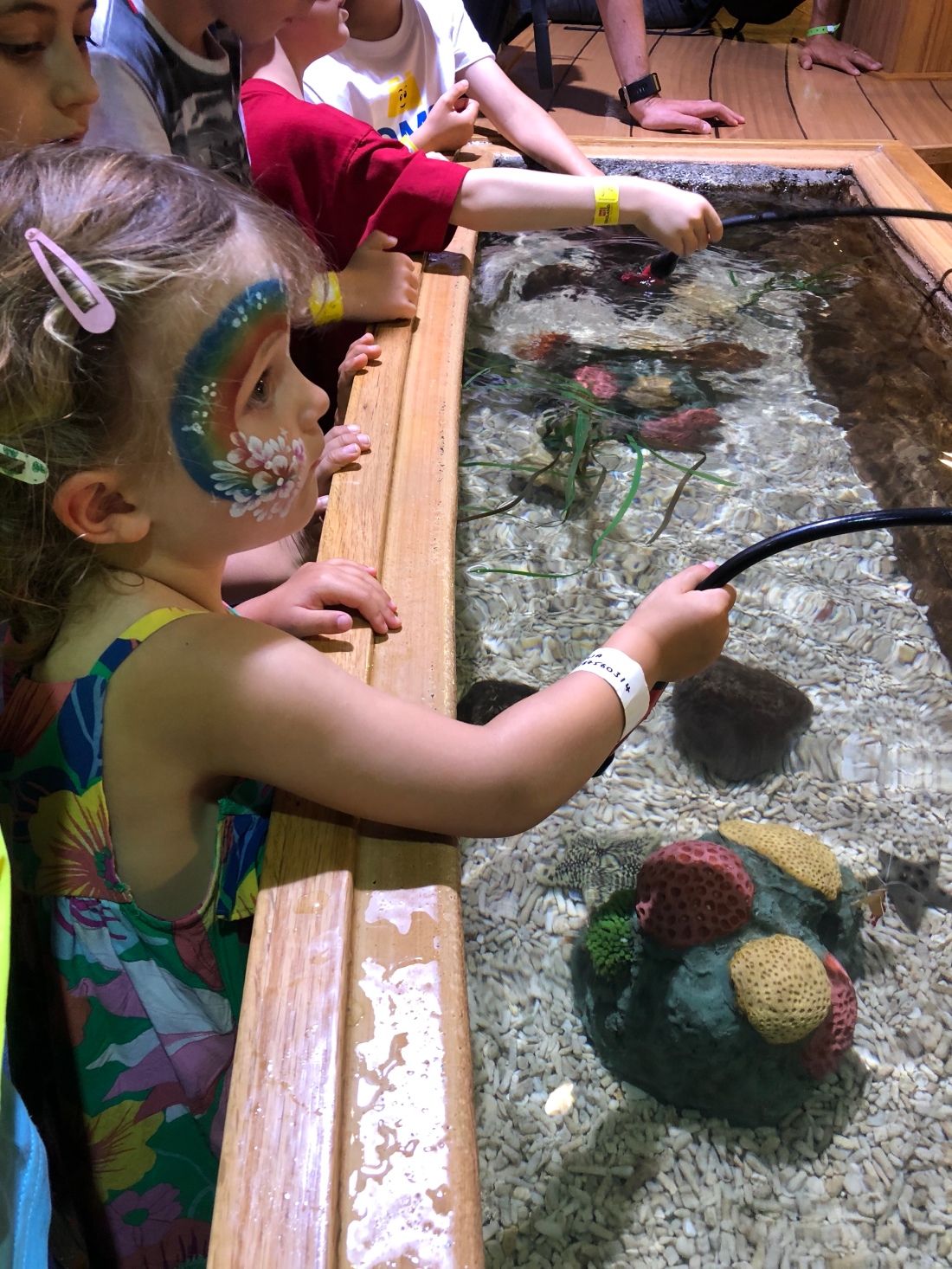 With the rain receding, it was time for us to leave.  Cornelia fell asleep within minutes of being in the car, and we started the long trip to Hamburg for the night.

She didn’t sleep for long though, and when she woke, she asked if she could have her “Fire Phone” (her Kindle) as she hadn’t had it for a few days.  Ah.  The Fire Phone that I had confiscated at the hotel near Legoland and put in the top cupboards out her reach… and forgotten to retrieve.  Surely not THAT Fire Phone?!!  I had realised shortly after leaving Billund that I had left it behind, and had been in email contact with the hotel reception, who apologised but said it had not been found.  I then sent a further email explaining that it was exactly where I had said it would be, unless someone else had taken it, and detailed the circumstances under which I had put it there.  They were unable to check that night, due to new guests being in the room now, but assured me they would check again in the morning.

We arrived at our accommodation near Hamburg at around 22:00, and were eventually met by a keyholder who gave us access to our room, which was large and clean and comfortable.  We hadn’t eaten, so I whisked up some pasta bolognese (which I’d made five days previously but which was fine, thankfully) and we all went straight to bed afterwards.  Cornelia had wanted to keep her face paint on, and as she’d been such a good egg with a long car journey and a very late supper, I said she could have a shower in the morning and wash it off then.  She promised to stay still as much as she could while she was asleep, so she didn’t ruin it.  And she was still chattering to herself until midnight, when she FINALLY fell asleep.  I honestly don’t know how she kept herself awake so long (with no meltdown)!