Cornelia called out this morning at about 06:00, and Ian went to her, cuddling her until she fell back to sleep.  She woke again just before 08:30, and came into our room full of joyfulness.  She was feeling particularly playful, wearing my glasses (which she loves to do as it makes her eyes all fuzzy), and blowing raspberries. 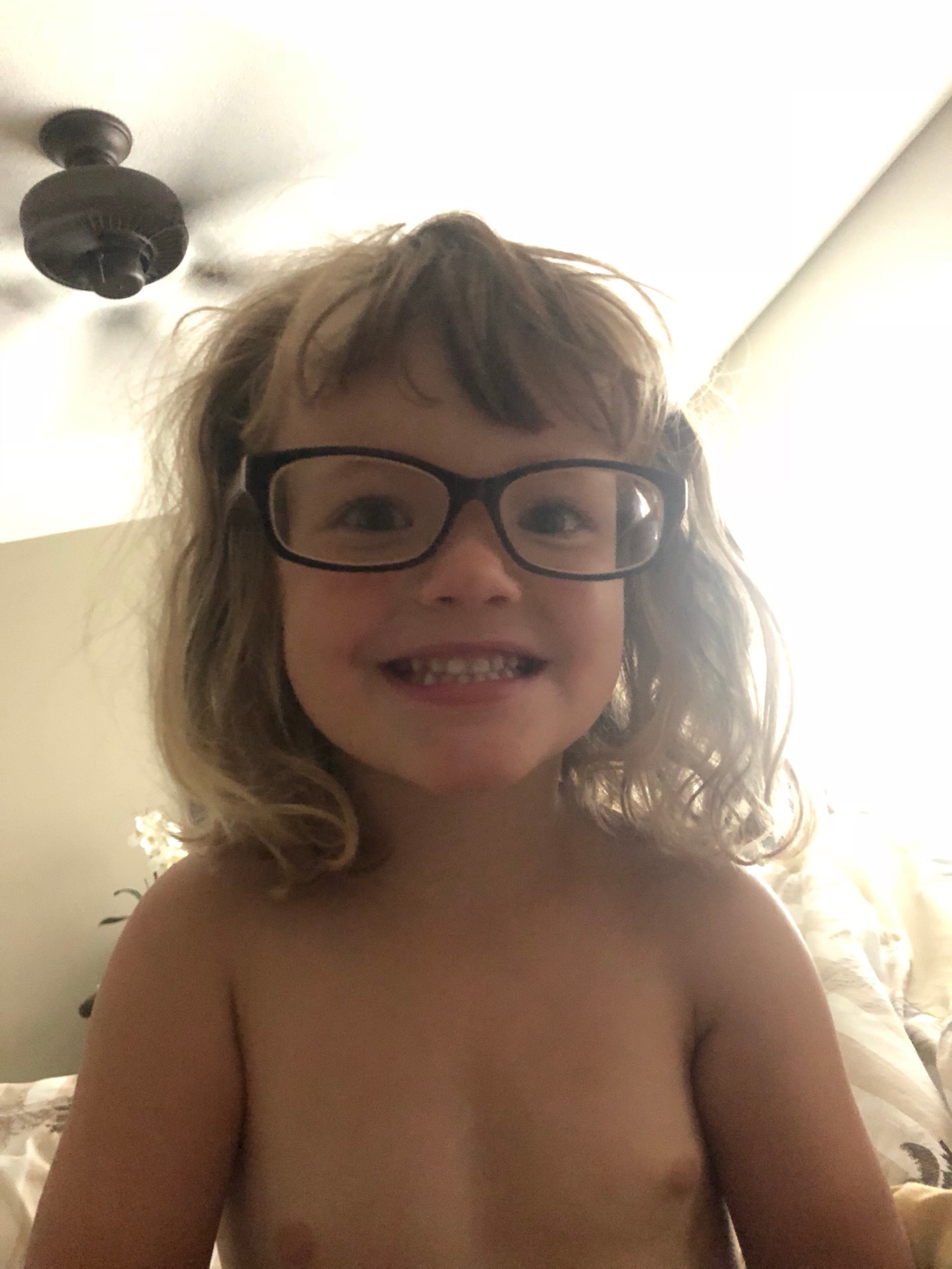 Ian finally felt well enough to drag himself out for a short run and when he came back, I went out too.  I had a great run, and would’ve happily stayed out for longer, had I not been aware that our penultimate morning was ticking away, and we wanted to get to the beach asap. 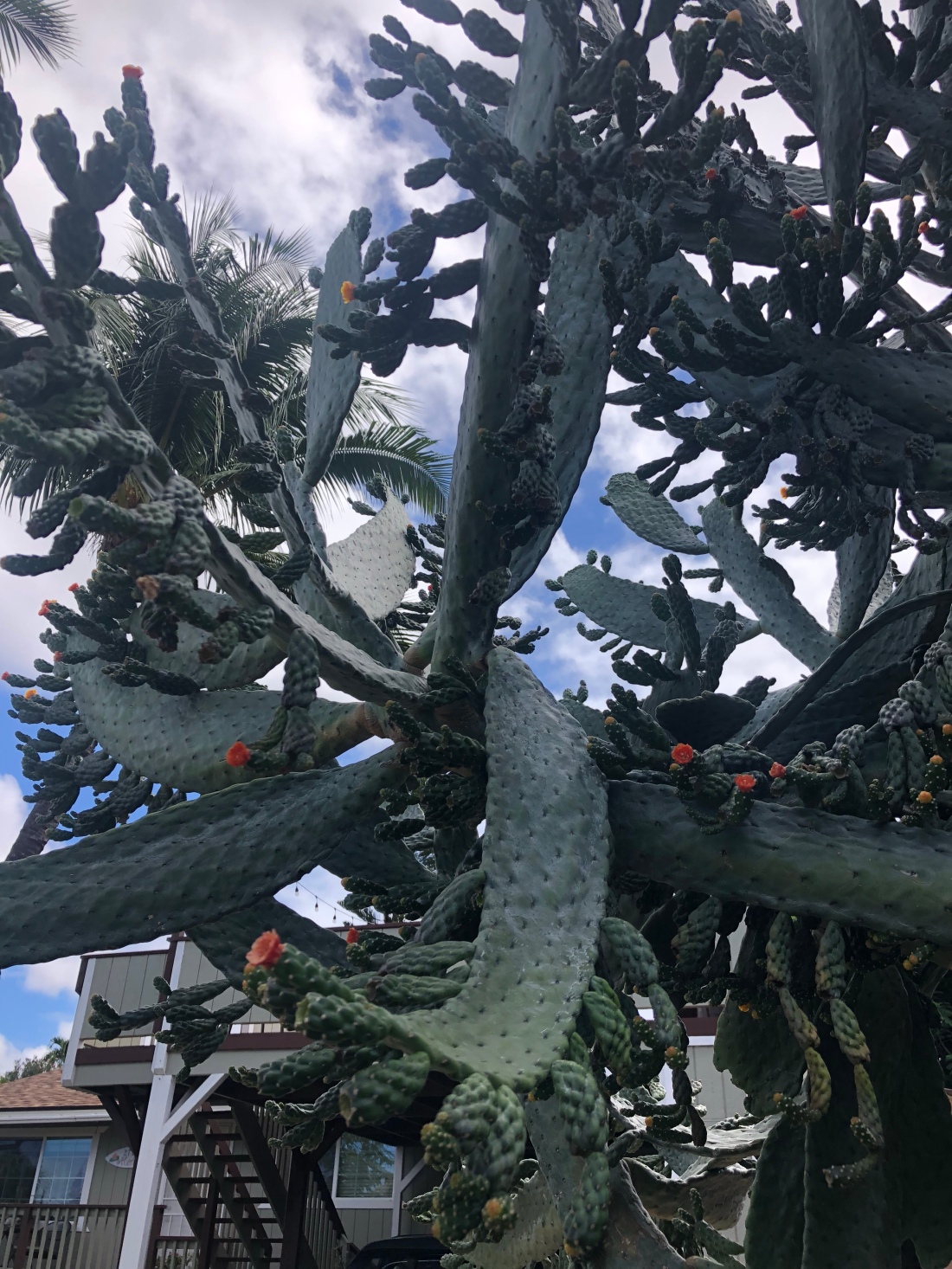 When I returned from my run, some maintenance men had just arrived in our garden, and started taping up our French doors.  Several ‘phone calls later, it appears we just have to accept that we wouldn’t be able to use our garden today… We were pretty pissed off, but all we were told was that it was “very unfortunate” that the painting had been booked for today.  Anyway, I didn’t want to waste any more of our morning on the ‘phone, so I left and joined Ian and Cornelia down on the beach, where they were already in the water. 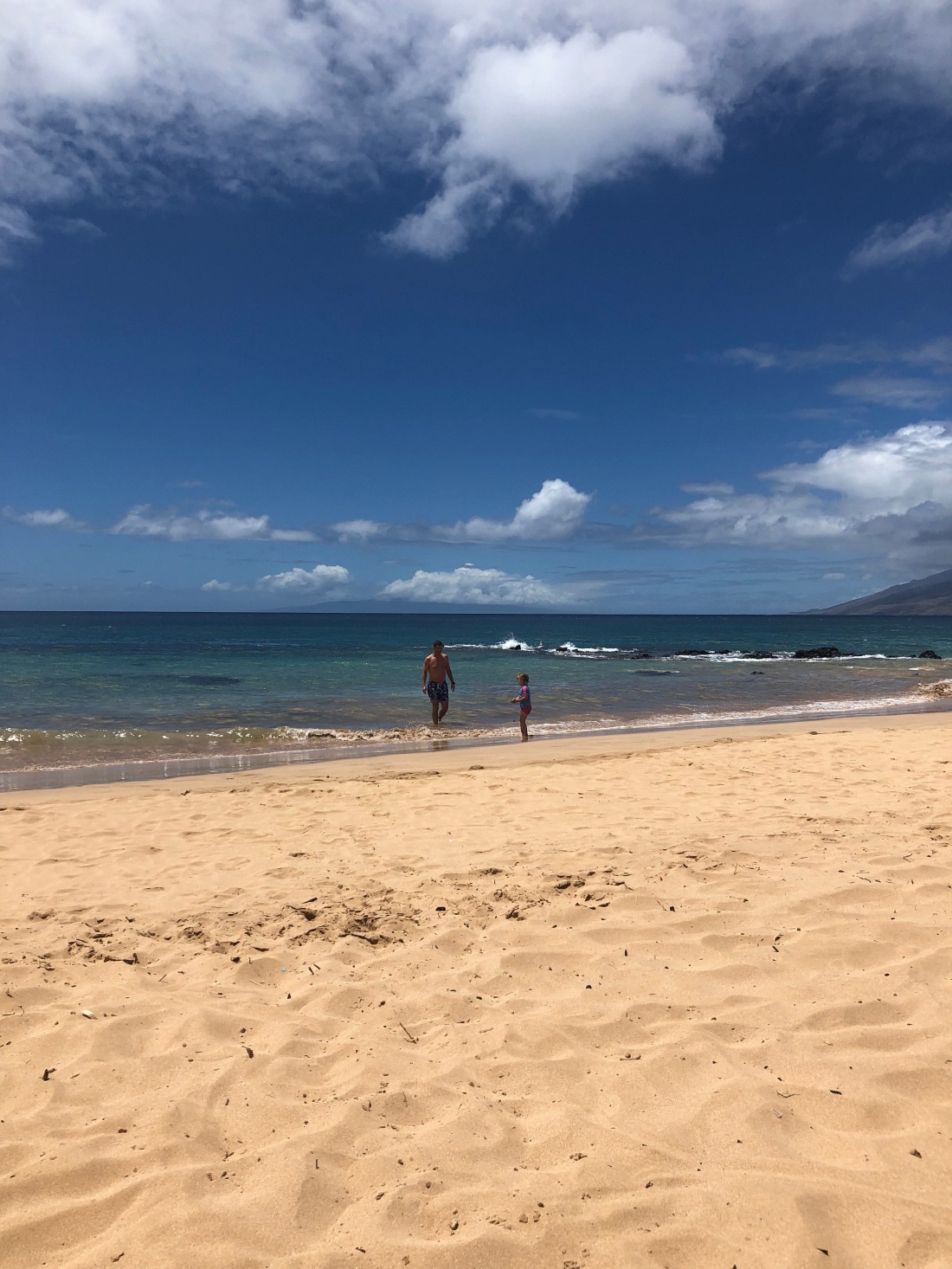 It was slightly cooler today, but we were all covered in suncream to avoid getting burnt any more.  There’s not much to report about our beach fun – we played for hours, digging a boat this time, and making sand cupcakes to bake, as well as lemonade and lemon cake…  the imagination of a four year old is endless!  I took Bugsy into the sea and we saw another turtle.  I held Cornelia up in my arms, and the waves brought the turtle in so close to the shore that Cornelia was so excited that she’d seen an actual turtle, not just its shadow in the water this time! 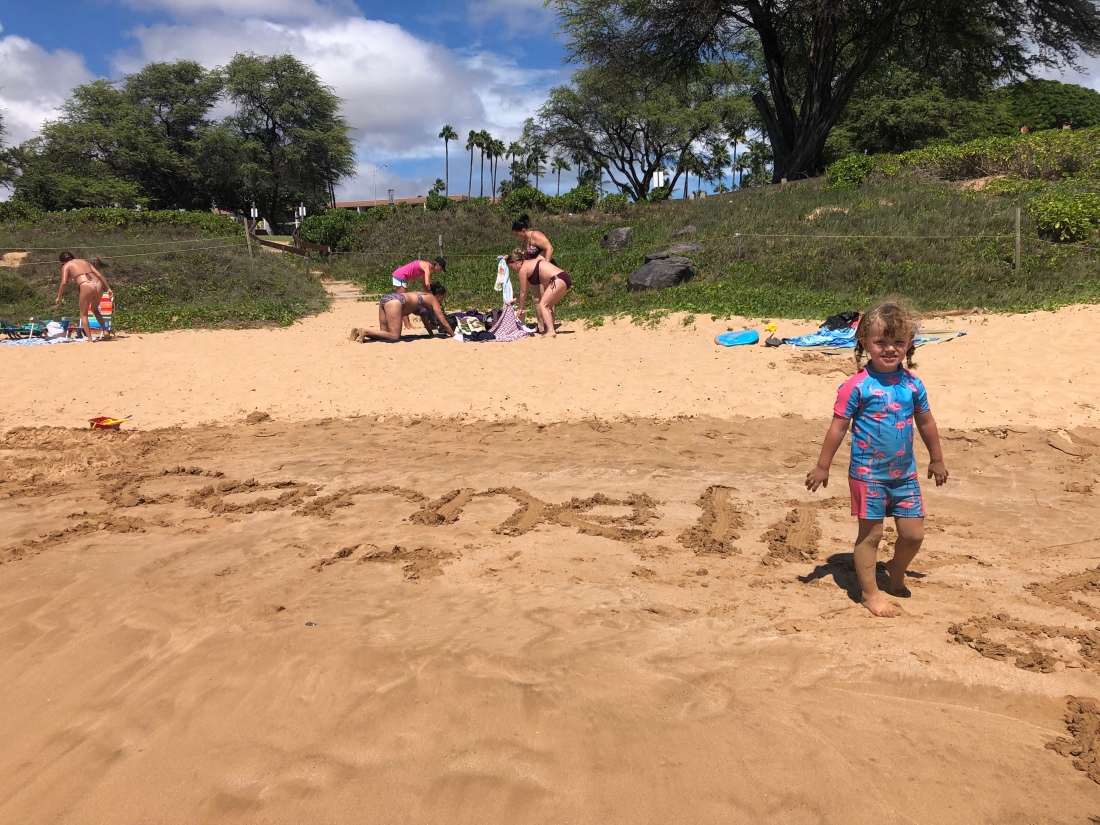 It was well after 14:00 when Ian started making noises about lunch.  He nipped back to the condo to make sandwiches, and when he returned, we left the beach and picnicked on the grass just above it.  It was pure heaven sitting there, eating sandwiches and apples, watching the ocean and the palm trees.  It is so relaxing here – I can see why so many people end up moving here.  (Two of our taxi drivers have moved here in the last year, and were previously holidaymakers to the island, and decided to try living here full time.  They are very happy with their decision so far!) 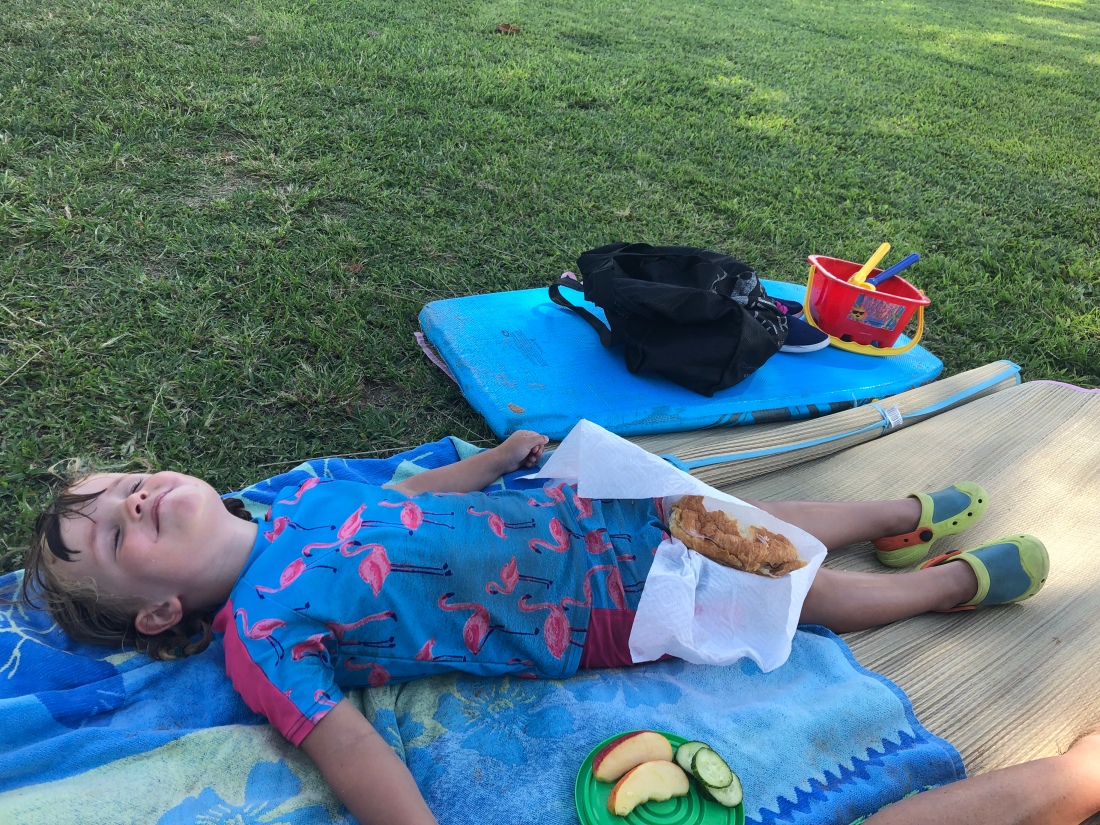 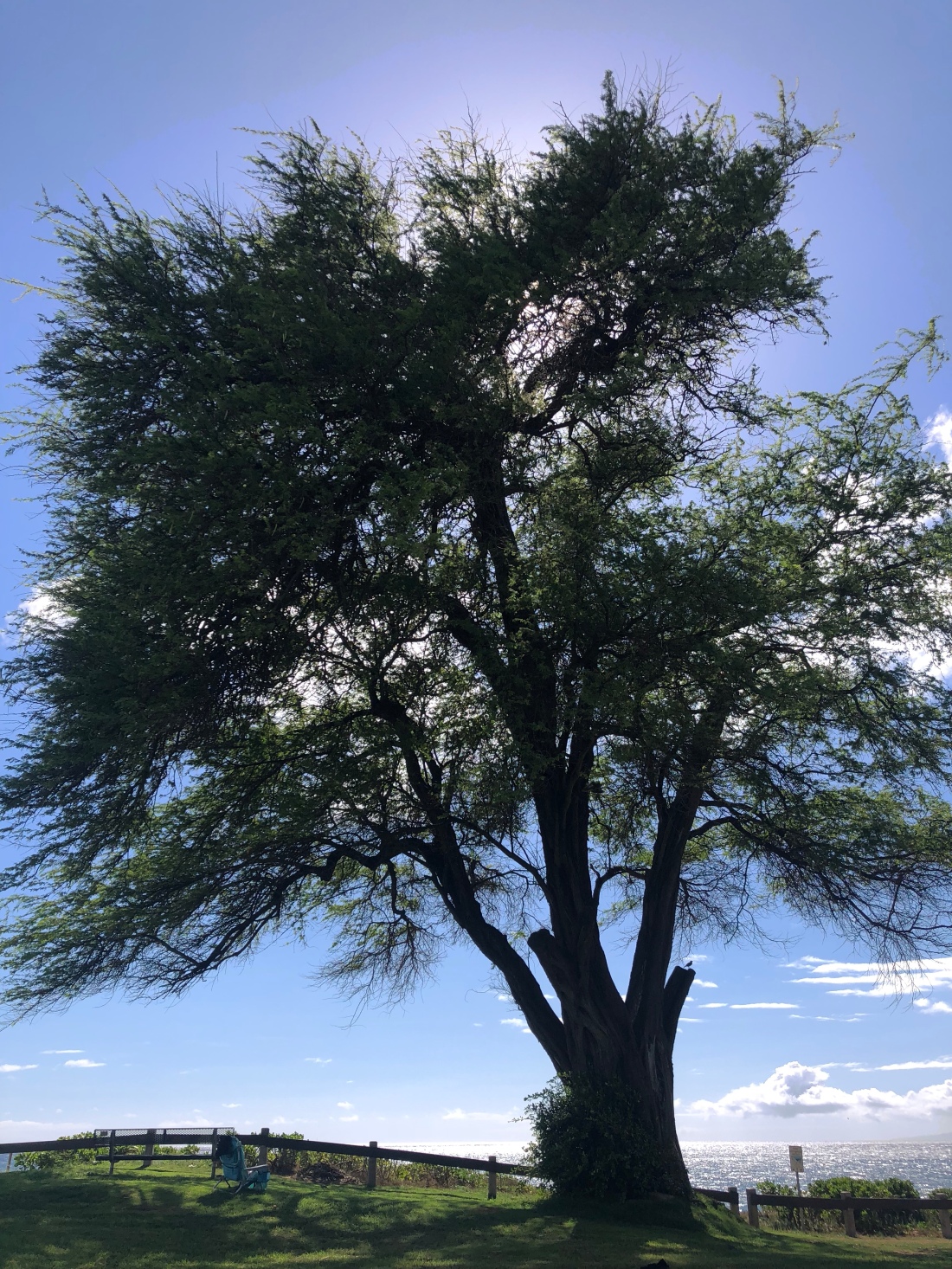 I’d suggested to Bugsy that if she ate all her lunch, she could also have a chocolate ice cream, from the parlour in the shopping precinct a short walk away, as long as she walked the whole way there and back without complaint.  She reminded me of this suggestion as she polished off her croissant, so we walked down together, and Ian took the beach stuff back to the condo.

When he met us at the ice cream shop, I’d already polished off my mint chip cone, and Cornelia was halfway through hers.  It is pure deliciousness!  When she’d finally finished, I said to Ian that he simply couldn’t leave Hawaii without a Hawaiian shirt, so we went next door to have a look around.  We ended up with a shirt for him, two Christmas presents for other people (which I obviously cannot divulge here!), a fridge magnet, and two hairclips for Cornelia (one red and one white hibiscus).  The lady in the shop was sweet and helpful, and even gave Cornelia a free necklace (a purple hibiscus) which completely made her day! 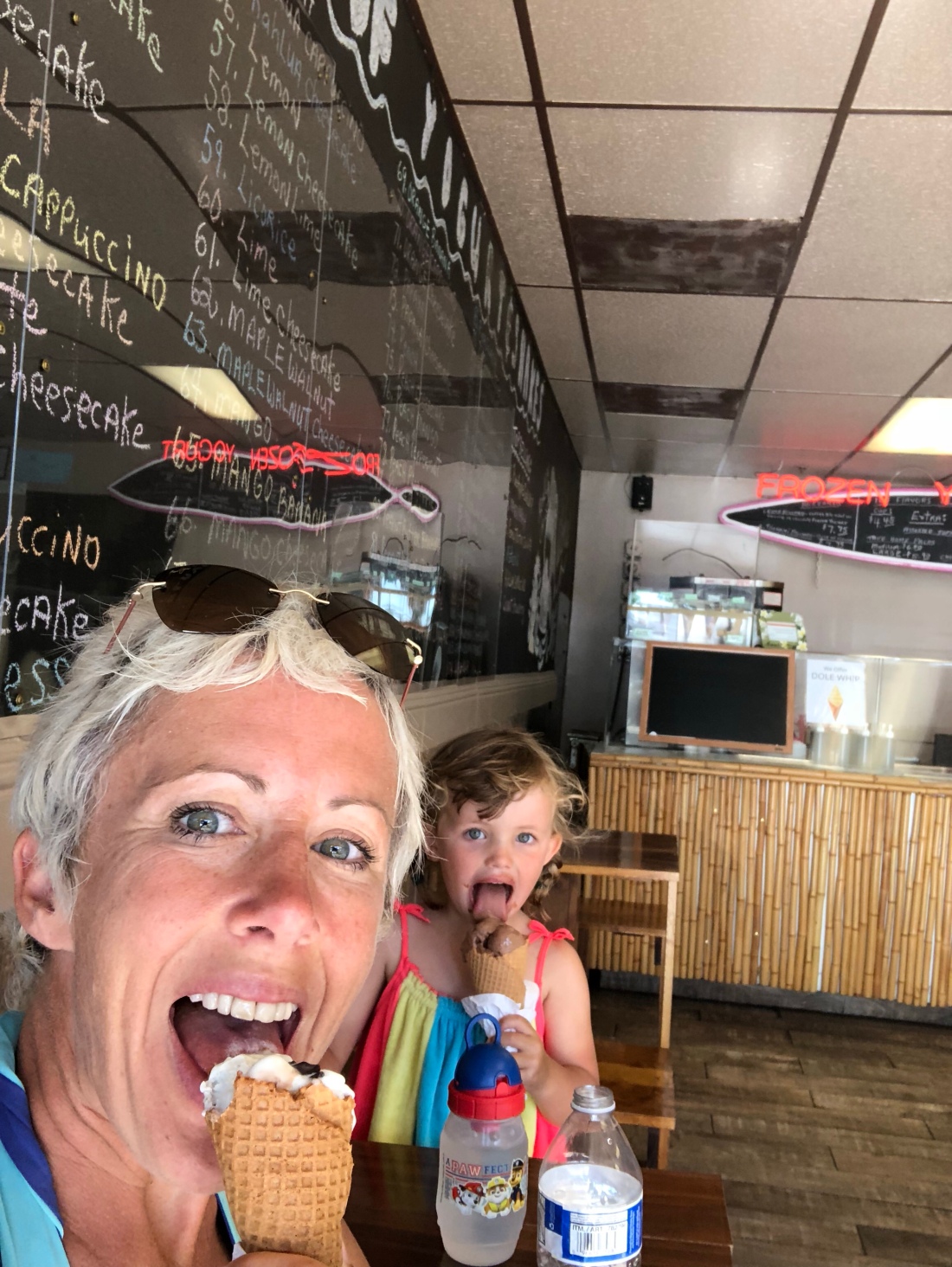 Our happy little girl danced her way back towards our complex, when Ian suggested she might like to stop by the swings.  Of course, she did, so while she went on them, I came back to start tea and shower.  Ian then reminded me that it was my turn to go down to the beach for the sunset, so I raced down just in time to capture a very pretty evening sky, and I stood in the evening peace and tranquility drinking in the magnificent beauty of it all.  With a happy soul, I made it back to the condo, to finish off tea, which was a funny mix of pasta & pesto, potatoes, frankfurters, baked beans and broccoli… We had various things that needed using up!!  In any event, everyone ate everything on their plates! 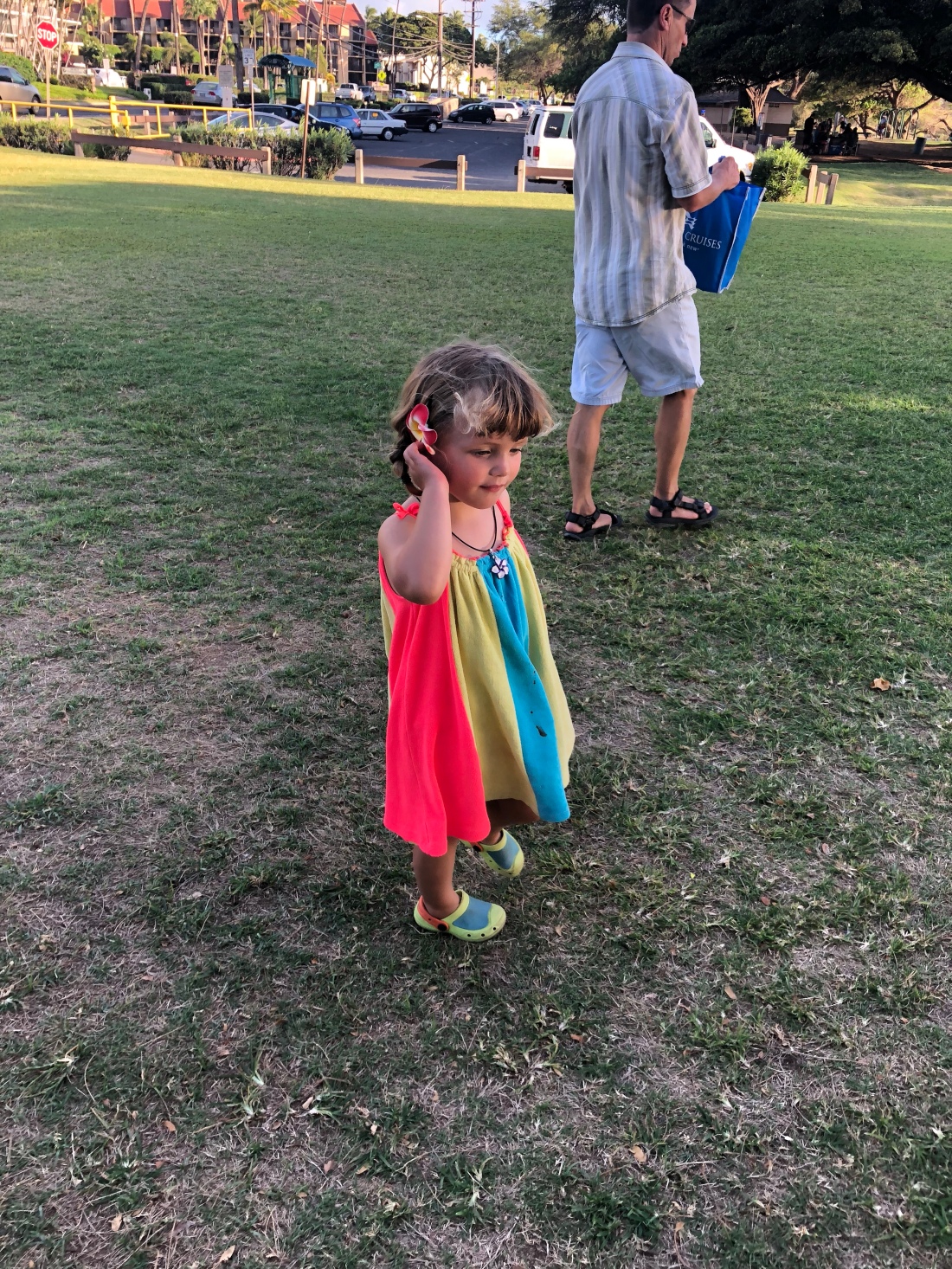 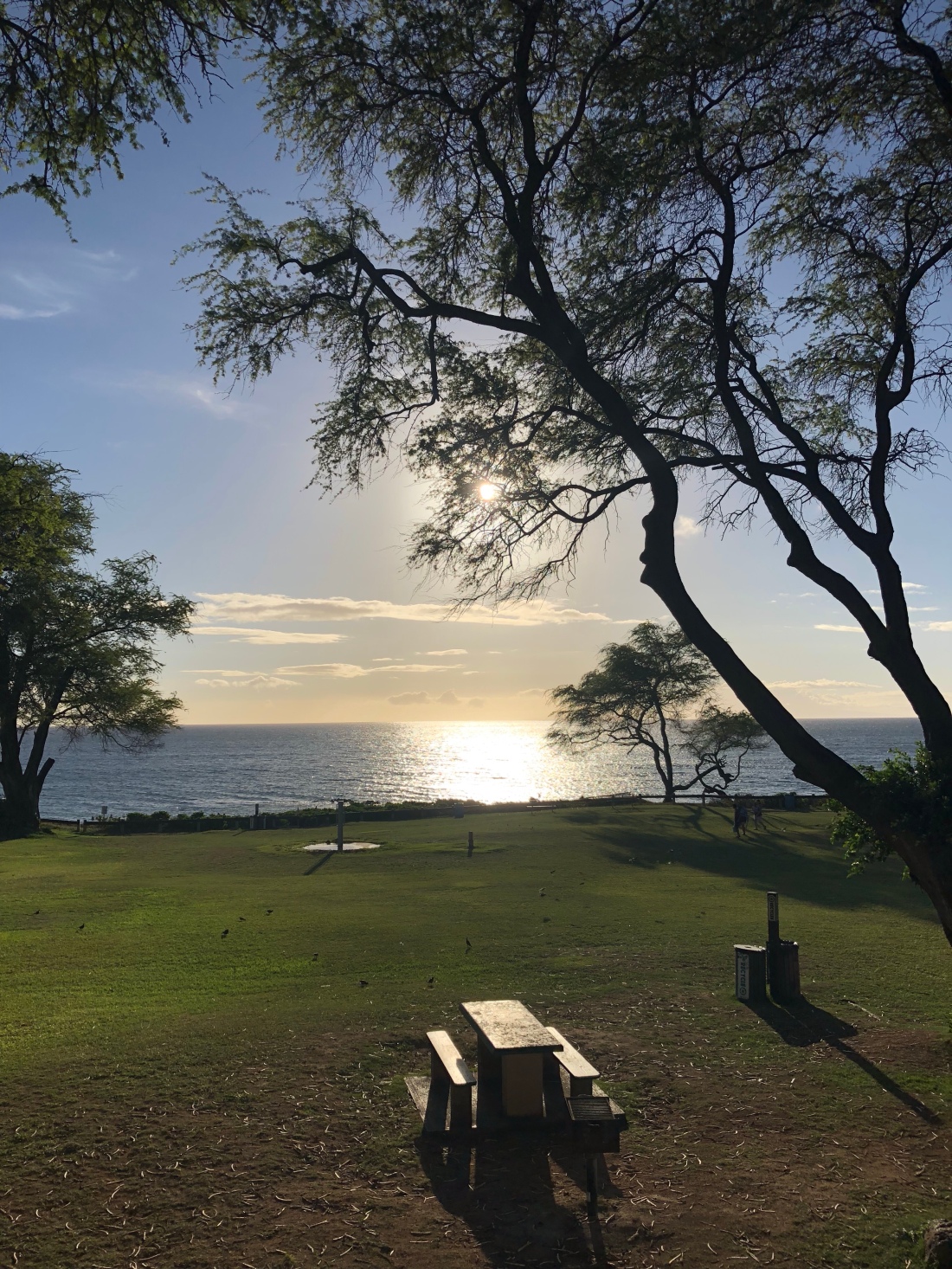 I wanted to get Cornelia to bed on time tonight, to avoid last night’s overtiredness and excitement, and sure enough, she was good as gold.  She had lost a story earlier (in the shower with Daddy for spitting at him…) but didn’t kick off when she was reminded of that.  I cuddled her for five minutes, and she was sound asleep by the time I left her bed.  Can’t believe we’re leaving tomorrow – but at least we have the whole day in Maui first! 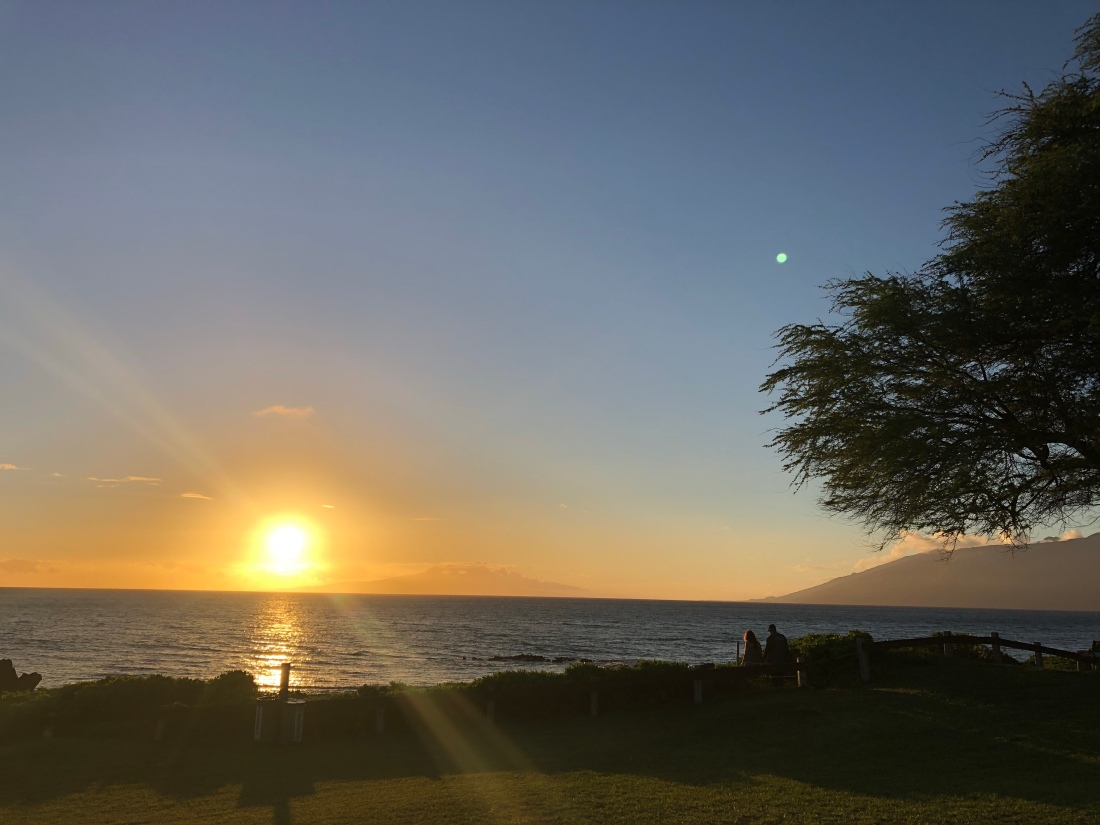 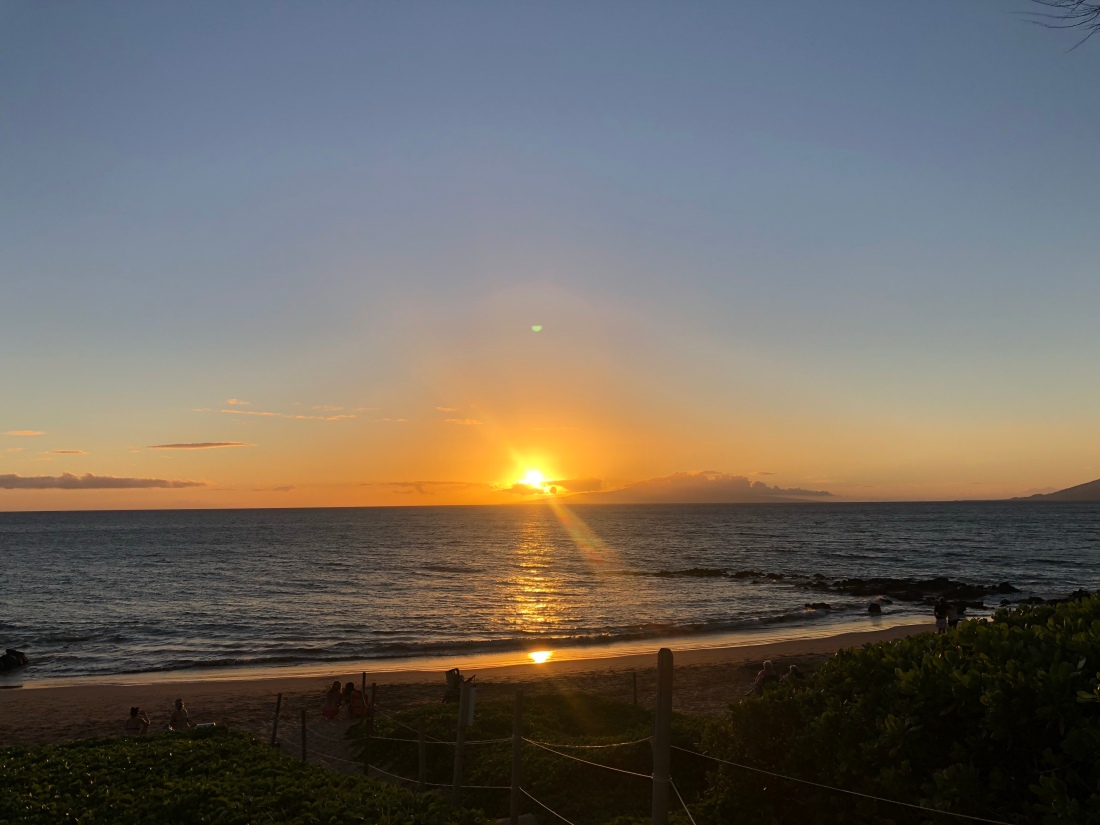 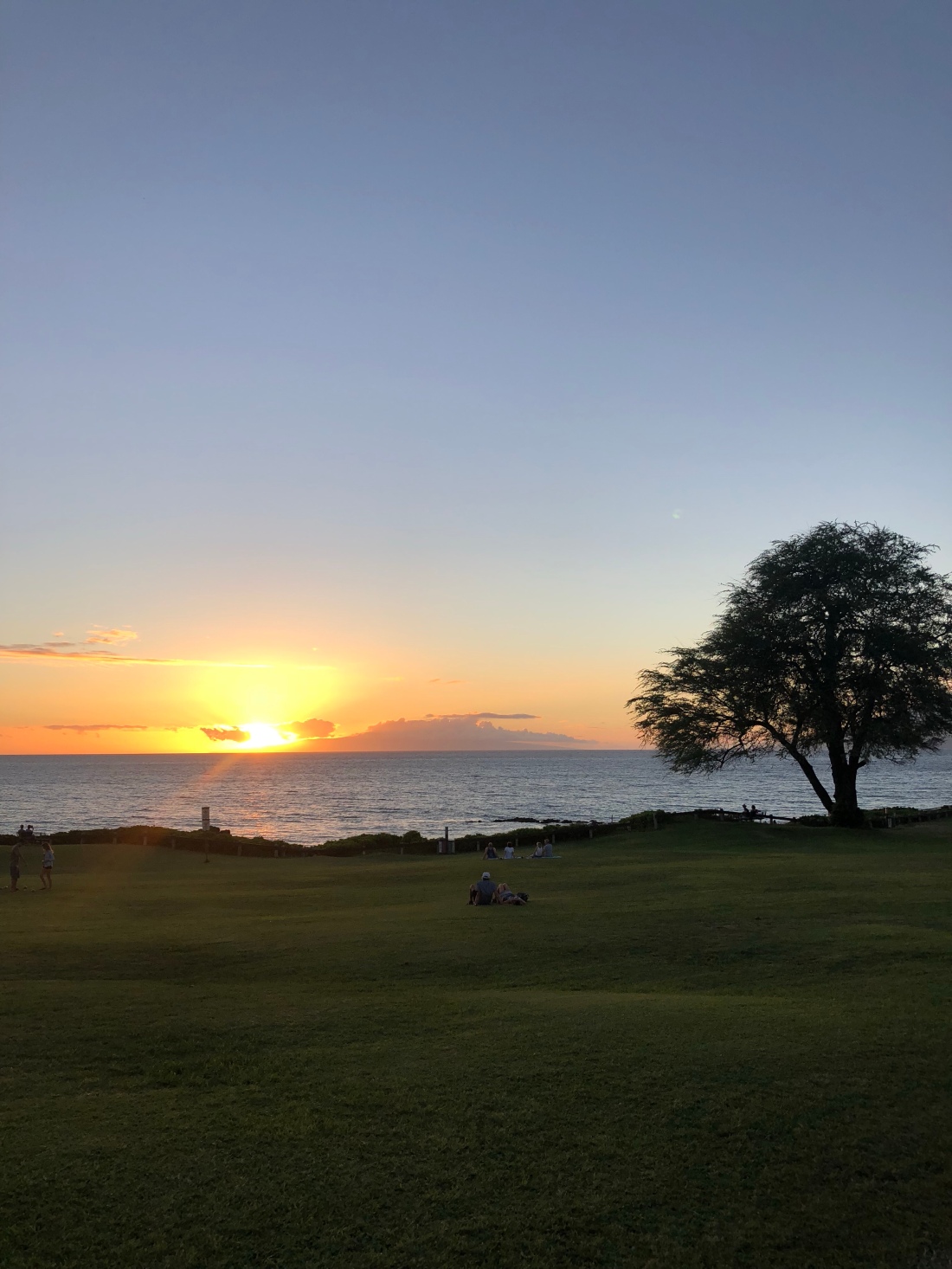 One thought on “Beach baby”