I had a lovely run again to start the day, although Ian and I had both woken up with really sore necks.  Not sure what’s caused it?  Either all the digging in the sand yesterday or just that the bed is a bit softer than we’re used to and maybe a few days in it is taking its toll.  Anyway, the run didn’t particularly improve my neck discomfort but nor did it make it worse.  I was a bit late getting out for my run, so on my return I was sure to be as quick as I could be to shower and dress, so that we could make our bus at 11:30. 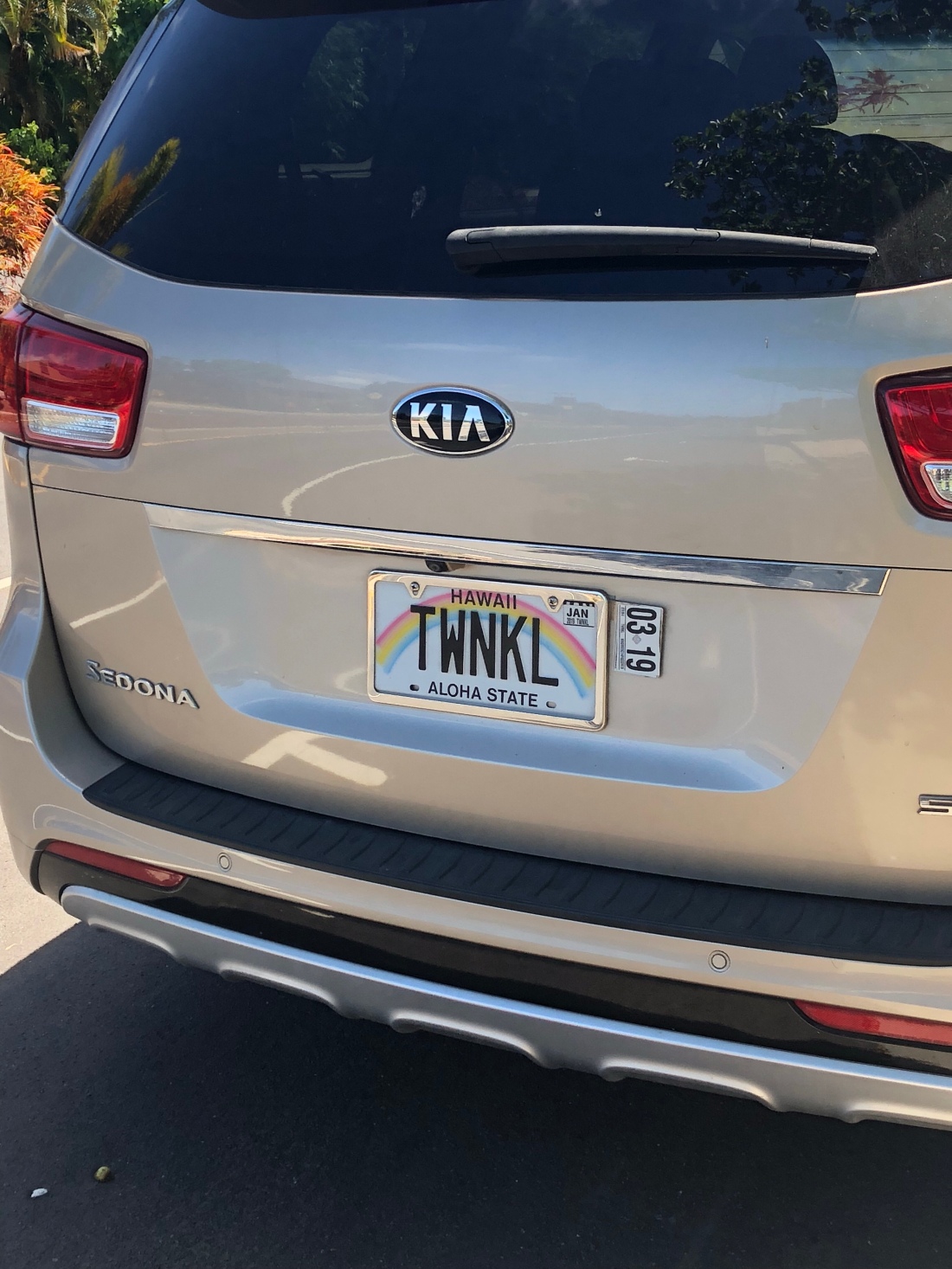 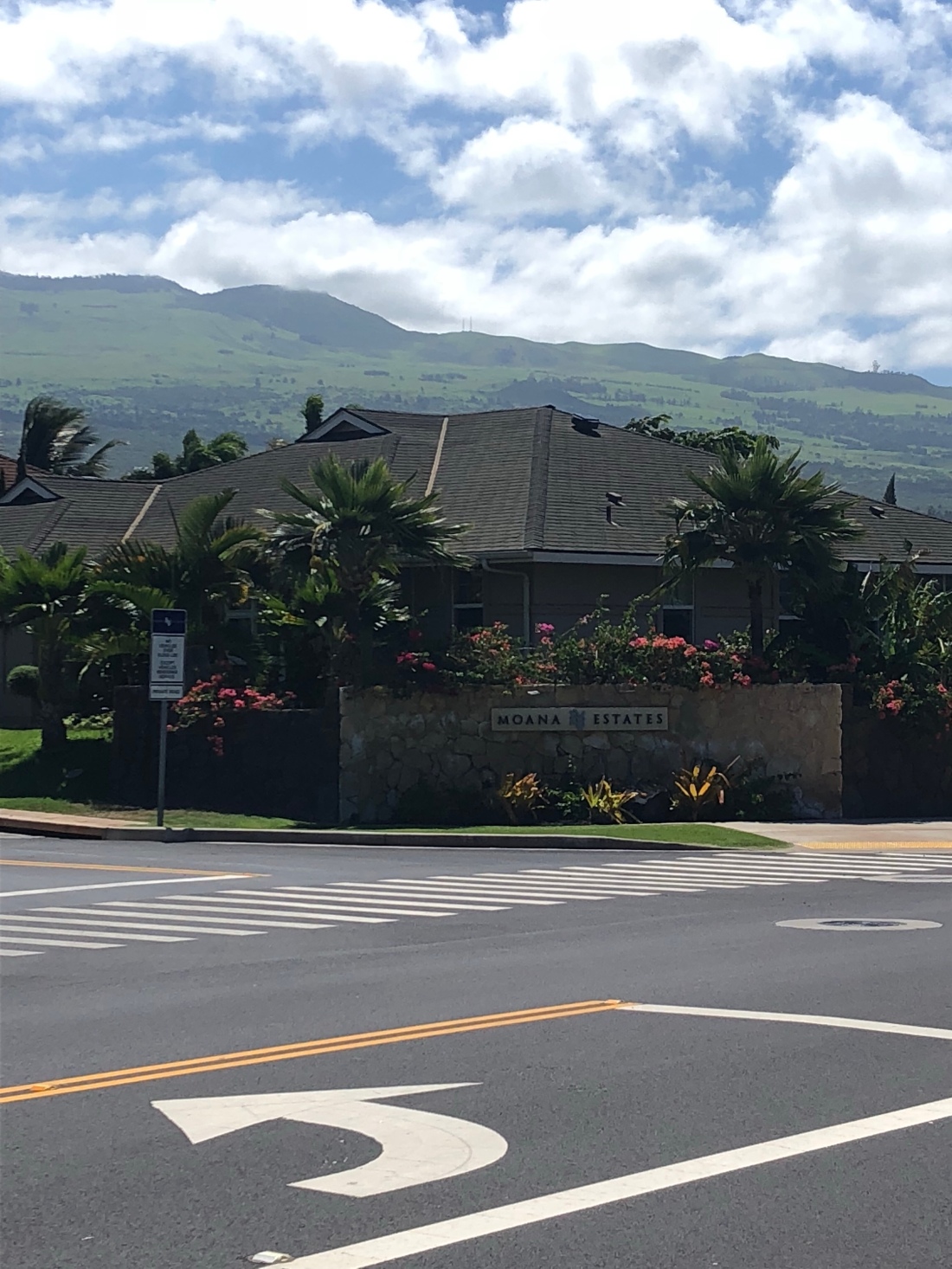 As it happened, I could’ve taken my time to shower etc, as Bugsy had spent the morning screaming and yelling at Ian, for some unknown reason, and so she hadn’t had her teeth or hair brushed, nor was a bag packed for the day, and by the time I’d sorted all of that out, we’d missed the original bus.  Never mind, it gave Ian and Bugsy some time to calm down, and Ian went to the nearby store to get some milk and some change for the bus (you need exact change) and we met him at the bus stop, with everyone feeling considerably more cheery. 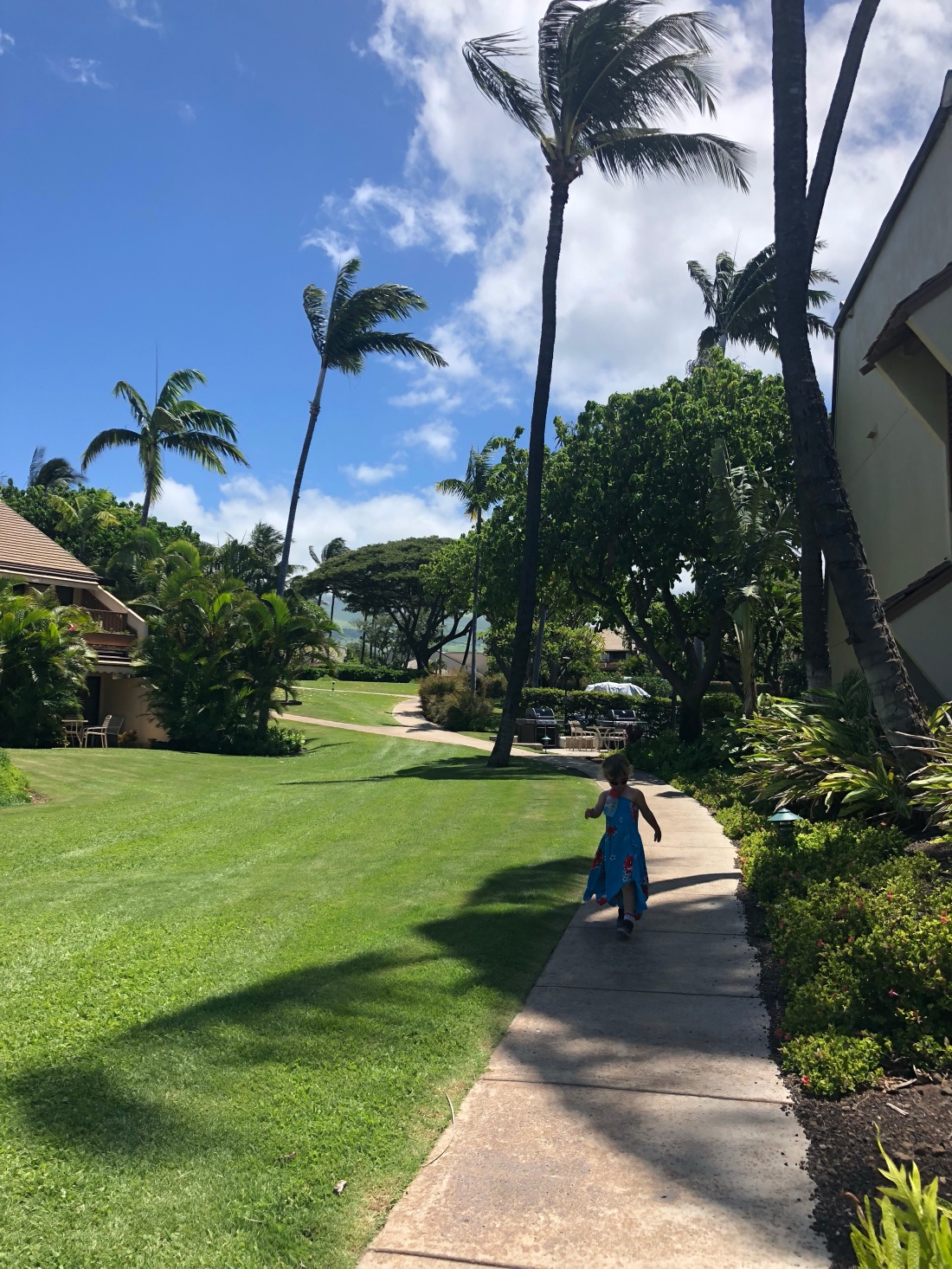 Ian had done the research for today, and we were off to explore the other side of the island, taking the #10 bus first to Queen Ka’ahumano Center, then changing onto the #40.  We bought all day passes, which meant we just needed to show our tickets to get on each bus, which made life much easier than finding the correct change for each section of the trip!  It was a bit chaotic at Queen Ka’ahumano Center, with all the buses seeming to arrive at the same time, but there was an excellent woman there who was shouting bus routes and numbers out to help everyone.  We only had to wait about ten minutes before our bus arrived, and we were on our way again, headed towards Makawao.

We watched as we came closer and closer to the dark clouds, and then the windscreen wipers came on…  and as we arrived in Makawao, it was pouring with rain.  We hadn’t brought any rain gear with us (today), but there was an Italian restaurant that I’d seen just past the bus stop, so we legged it in there, hoping for a decent lunch (it was about 14:30 by now).  We looked at the uninspiring blackboard which offered sandwiches, and two types of pasta which were on display, looking distinctly unappetising.  We might have ordered anyway, if the girls chatting in the kitchen had bothered to come out to take our order, or indeed greet us in any way, but as we waited, I had a quick look on Trip Advisor, and a little cafe a short walk away received decent reviews, and as the rain had petered out, we nipped out and down the road, finding the Makawao Garden Cafe tucked away.

It was only open for another half an hour, and they’d run out of chicken, eggplant and soup, but our colourful waitress was warm and friendly, and the menu was varied enough that this didn’t matter.  There was a dog tied up to the steps outside, and Cornelia went over to pat it (asking a nearby man if it was okay to do so).  The dog was very enthusiastic and loved the attention, slightly overwhelming Cornelia (in a nice way)!  The owner came back and said her name was Princess and she was a “bit nippy” – Cornelia confirmed this when she returned, saying that Princess had had a bit of a chomp on her arm, but it hadn’t hurt and she was just being friendly. 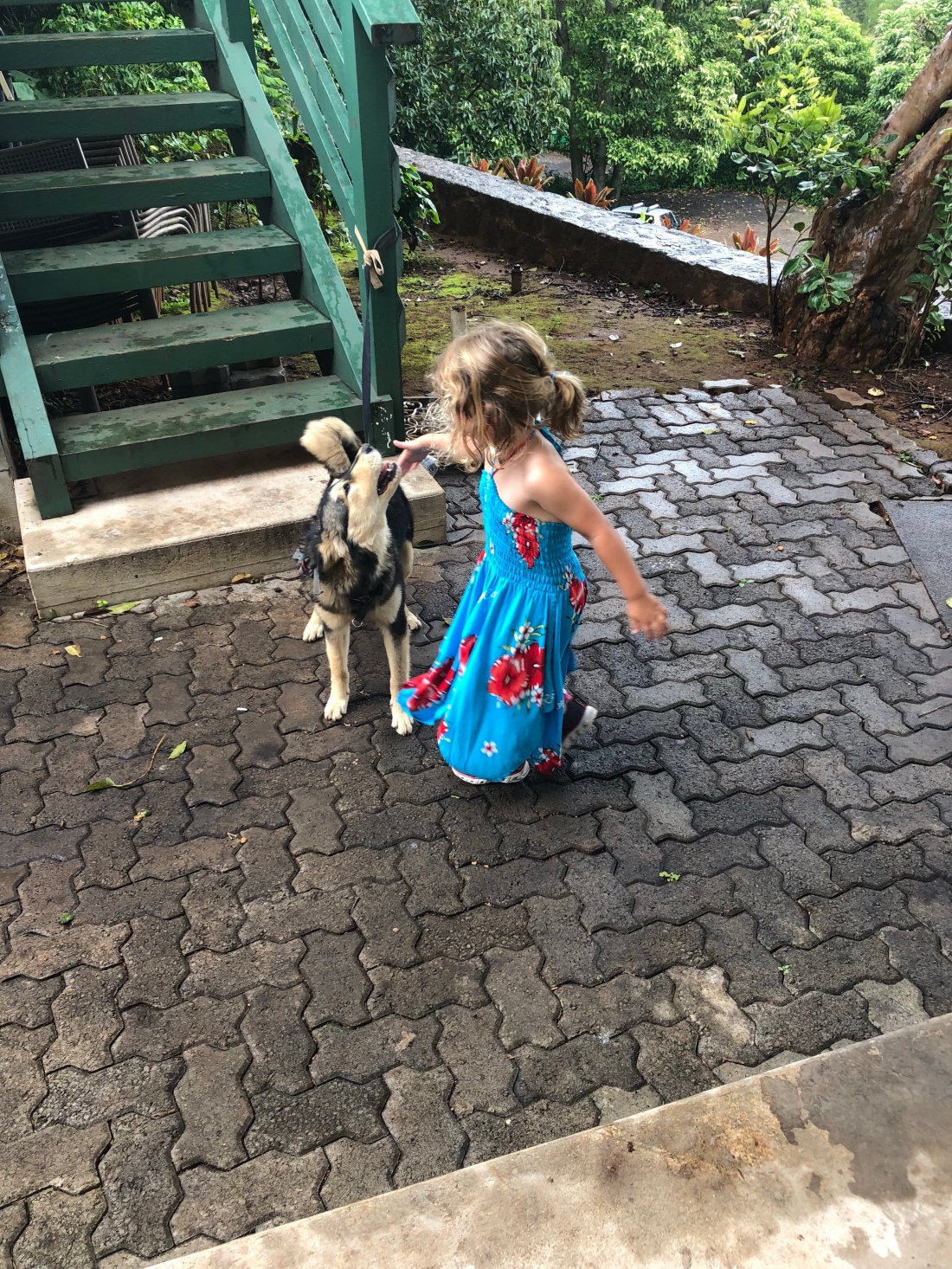 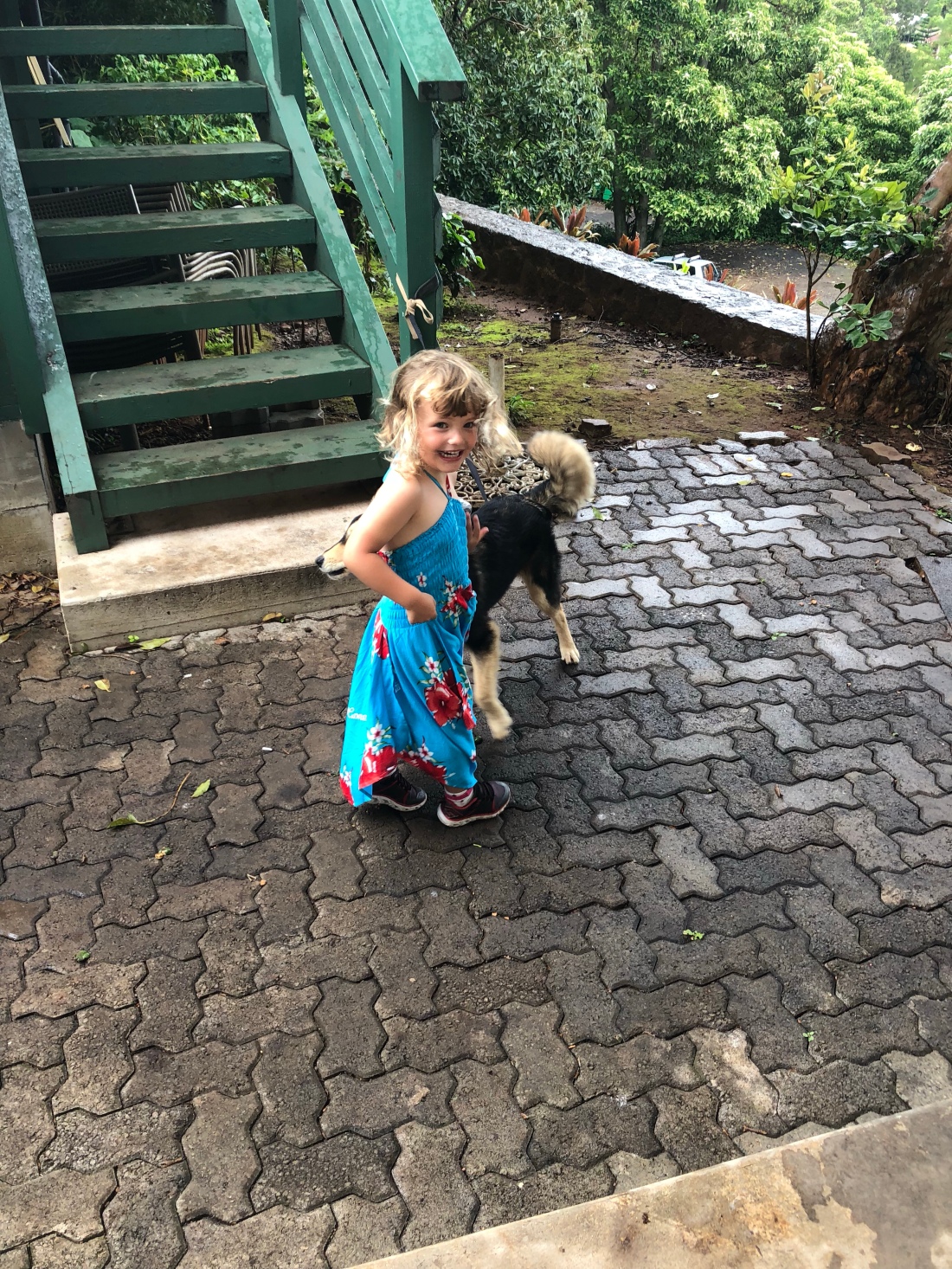 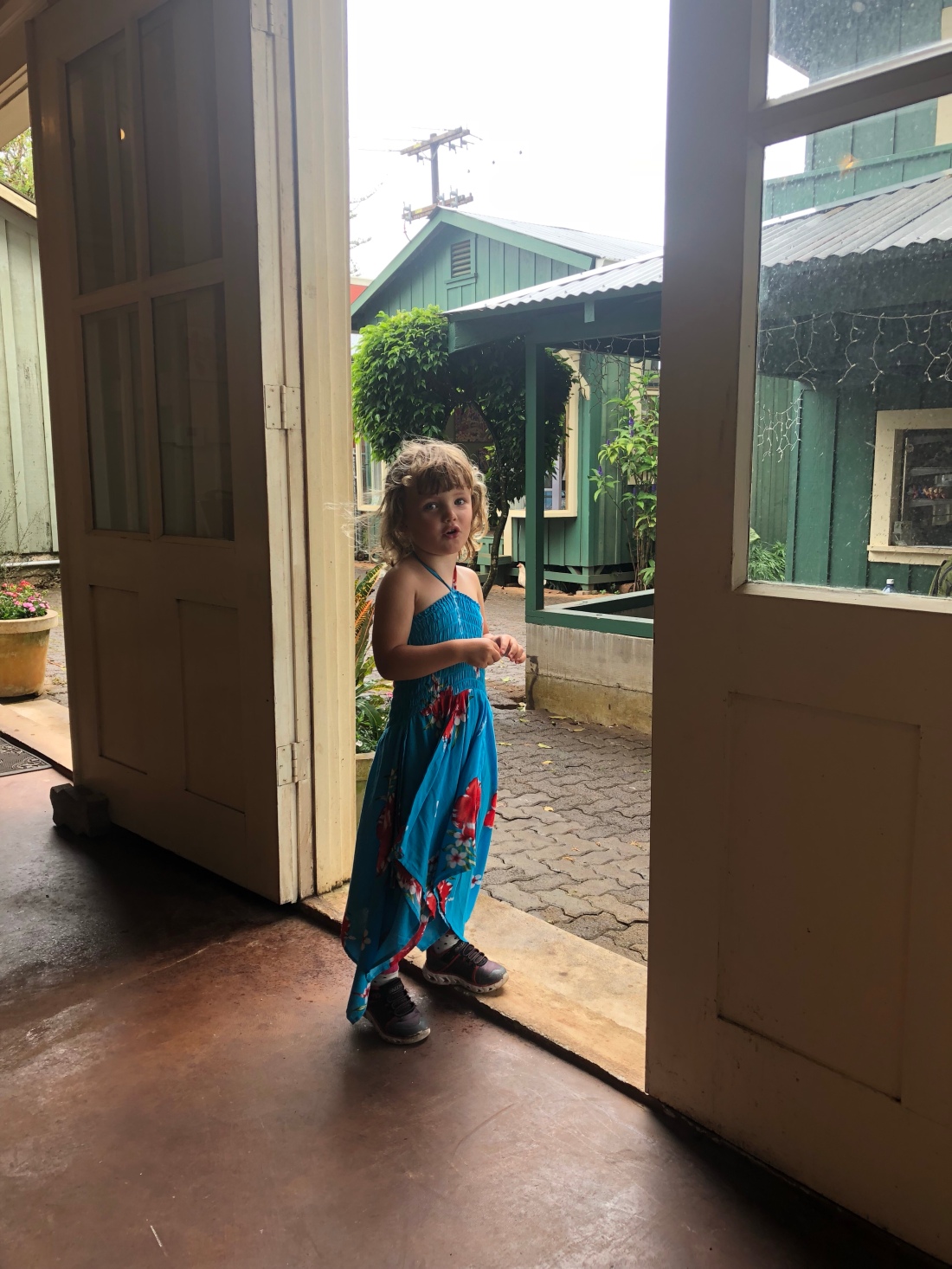 Our food arrived: cheese toastie for Cornelia, crab and avocado sandwich for me, and a Mahi sandwich for Ian.  All very tasty! 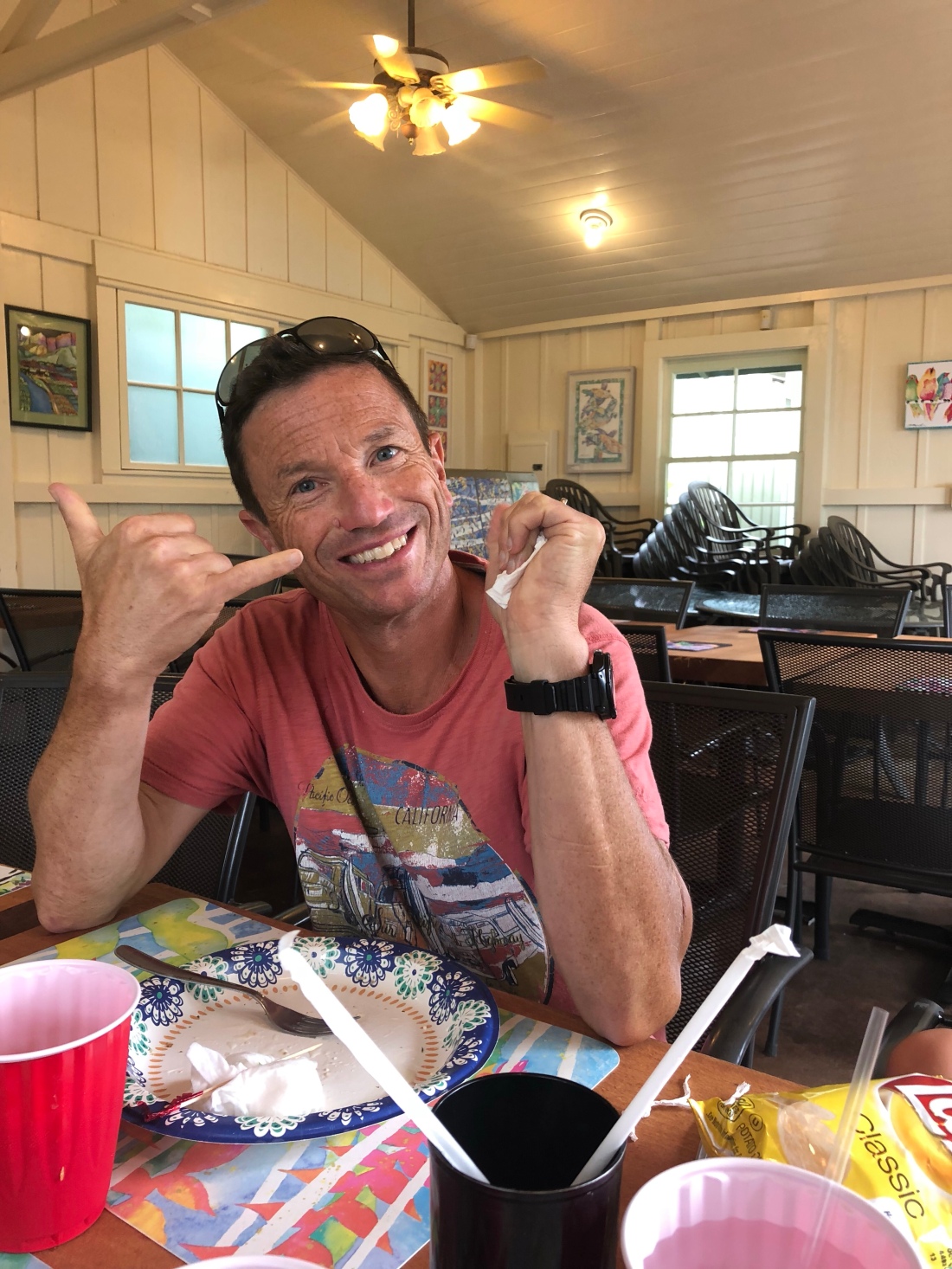 We only had about 45 minutes before we needed to catch our bus back (the late start this morning meant that our time in Makawao was somewhat reduced), and we wandered down the small main street of the little town, looking in the windows of the various art, jewellery and clothes stores.  We visited Makawao’s History Museum – a very small room with some displays of old menus and recipes, relating to the Portugese family that made Makawao its home, but with nothing of great interest, apart from a rocking horse that Cornelia was allowed to ride, much to her delight.

When we left the museum, we tried hiding from the rain under the shop awnings, but Cornelia was having none of it!  She just wanted to stand in the rain and get soaked!  I explained to her that if she got wet, there was no change of clothes and she’d potentially end up cold, but she didn’t care – she was one happy soggy child!  Back at the bus stop, we waited, and waited, and waited, and Cornelia passed the time by jumping and jumping and jumping (in puddles)!  Eventually the bus arrived, nearly 40 minutes late.  You could tell the driver wasn’t happy about the delay, as he crazily tried to make up time, driving way too fast and swinging us around.  On the up side, the drive back was very pretty – at one point, you could see the ocean on both sides of the island in front of you, and we saw our first rainbow for ages (albeit only a small one)!

The delay in Makawao meant that we missed our connection bus at the Queen Ka’ahumano Center, and as there wasn’t another one for an hour, we looked around the mall, treating Cornelia to a chocolate frozen yoghurt.  Ian went for a wander, while Cornelia ate her yoghurt, turning it into magical soup that she fed to me, to make me fall asleep…

Back on the familiar #10 bus, we were just three miles from home when smoke started pouring into the vehicle from behind the driver’s seat.  As the driver pulled over, some fluid started spilling down the main aisle, and the smoke continued to fill the bus.  He opened the doors as we all started coughing and spluttering, and after a short time announced that he thought it was anti-freeze and this bus was going nowhere else today!  Thank goodness for Uber…. Another $13 and we were safely back in our condo, and ready for tea. 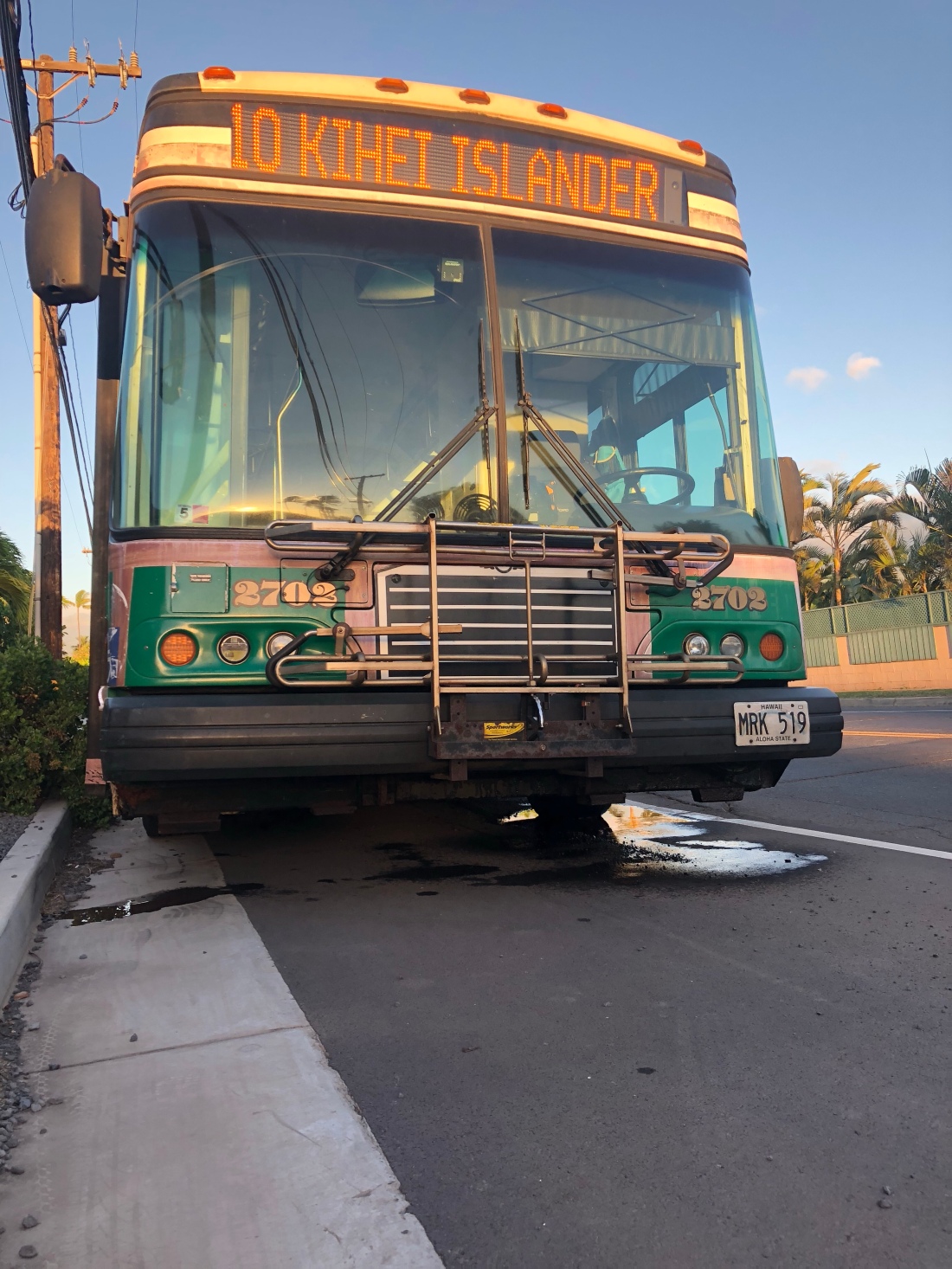 Mistakenly, I switched on the TV so that Cornelia could have a bit of relaxing time, while I cooked supper, but it was Teenage Mutant Ninja Turtles (the movie) and she was completely absorbed by the time I realised it was a violent and occasionally cruel film!  I thought she’d be terrified by it, but she rather enjoyed it, even though I’m not sure if she totally understood it.

She was no trouble going to bed, but after that, she was up several times, wanting cuddles and seemed wide awake.  I couldn’t settle her until nearly 22:30, which followed a bout of nighttime sobbing about random things.  I’m sure it must’ve been the excitement of the movie whirring around in her mind, and keeping her awake.  I shan’t be doing THAT again!!

One thought on “The driver on the bus says….”