We had the same start as yesterday morning with Bugsy coming into our room with her cheery “Good morning!” before clambering over me and onto Daddy for the first cuddle of the day.

I put my running kit on and headed out for half an hour, while Ian and Cornelia dressed and started breakfast. It was already hot and humid, so I didn’t break any speed records, but it felt great to be out running again. I turned left along the main road, instead of right (which is where we have gone every day), to see if we were close to anything else worth visiting, but the road was lined with condominium complexes the whole way, with some private residences squeezed in between. The route took me up, up and up a hill, that nearly saw me turn around (it wasn’t a long hill, but my legs were being very disagreeable in the heat!), but I persisted and what goes up must come down, so I enjoyed the last mile very much! 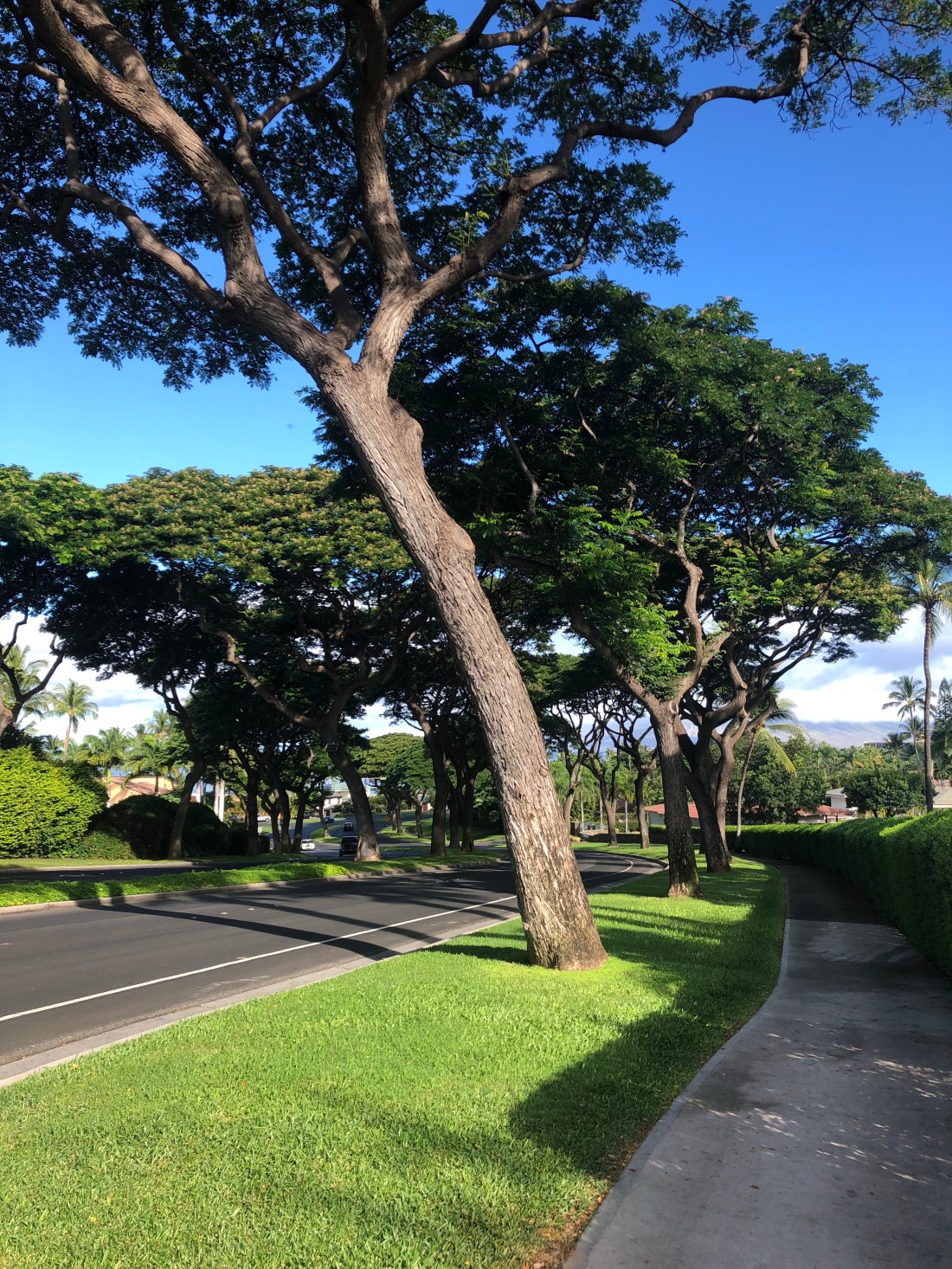 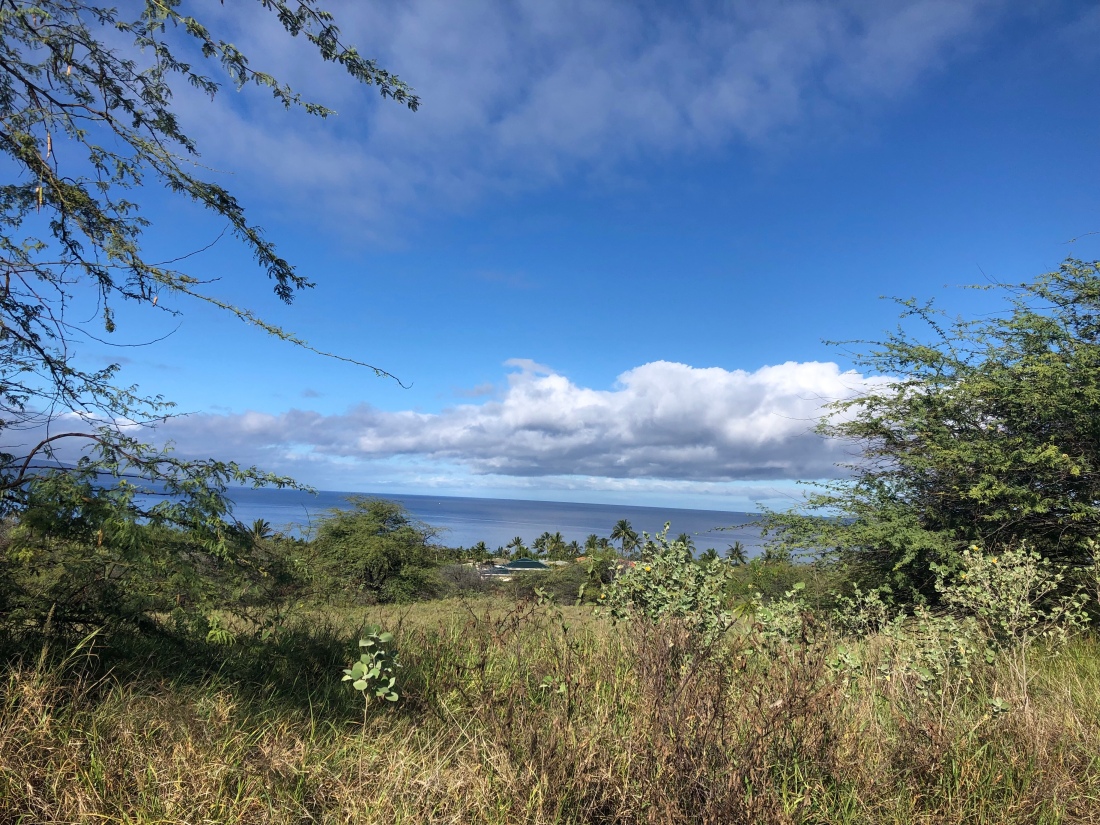 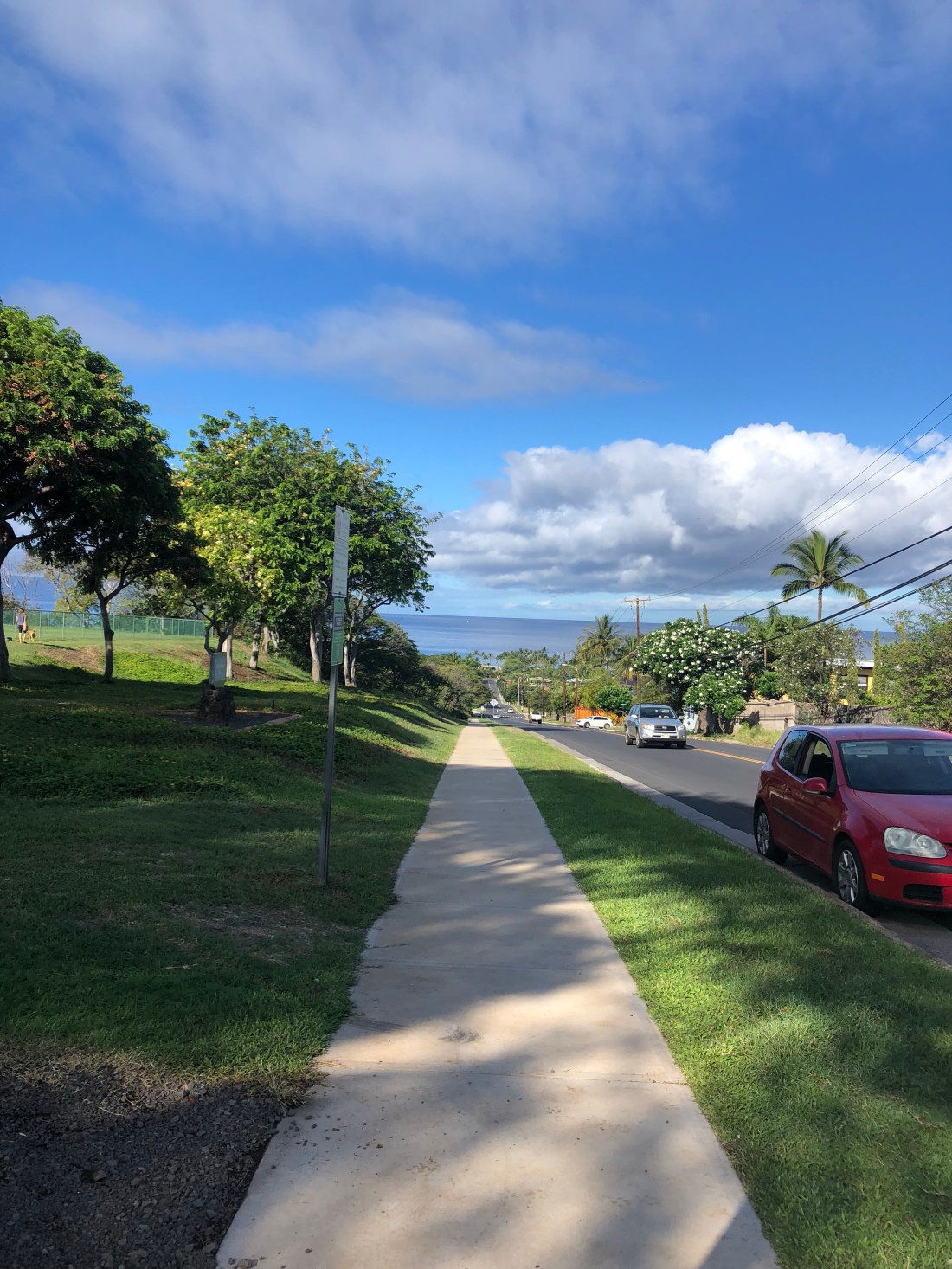 I was very sweaty when I returned and jumped straight into a cold shower to cool down. When I was out, breakfast had finished, but we weren’t in any particular hurry, and so we had another lazy morning, playing games and filling in Cornelia’s scrapbook, until I ran out of glue!  Cornelia was a magician this morning, and Daddy her willing volunteer from the audience, complete with magic mitts and a blindfold.  (Oh, THAT’S where all the glue went…!) We even managed to have a lovely long video chat with Charlotte.  We still can’t quite get used to the time difference!

As the heat of the day increased, we decided it was time to head out to the pool, where Cornelia tried out her snorkel and mask.  She was brilliant!  The mask wasn’t a perfect fit, and she took some time to get used to keeping her mouth closed to maintain the seal, but within no time, she was kicking herself along beautifully.  She really is a natural water baby.  We spent nearly two hours up at the pool, before needing to refuel with the usual ham and cheese croissants back in the room.  Ian isn’t feeling great again, so is mostly taking it easy, resting in the shade.

Cornelia managed a whole croissant and a whole pain au chocolat – these things are enormous!! She definitely needed it! It feels as if we’re not doing much, because we’re not out exploring all day, but actually, a couple of hours in the pool, a walk to the beach, a play on the swings – it’s all using energy and tiring her out.  So much fabulous fresh sea air.  It really is wonderful here. 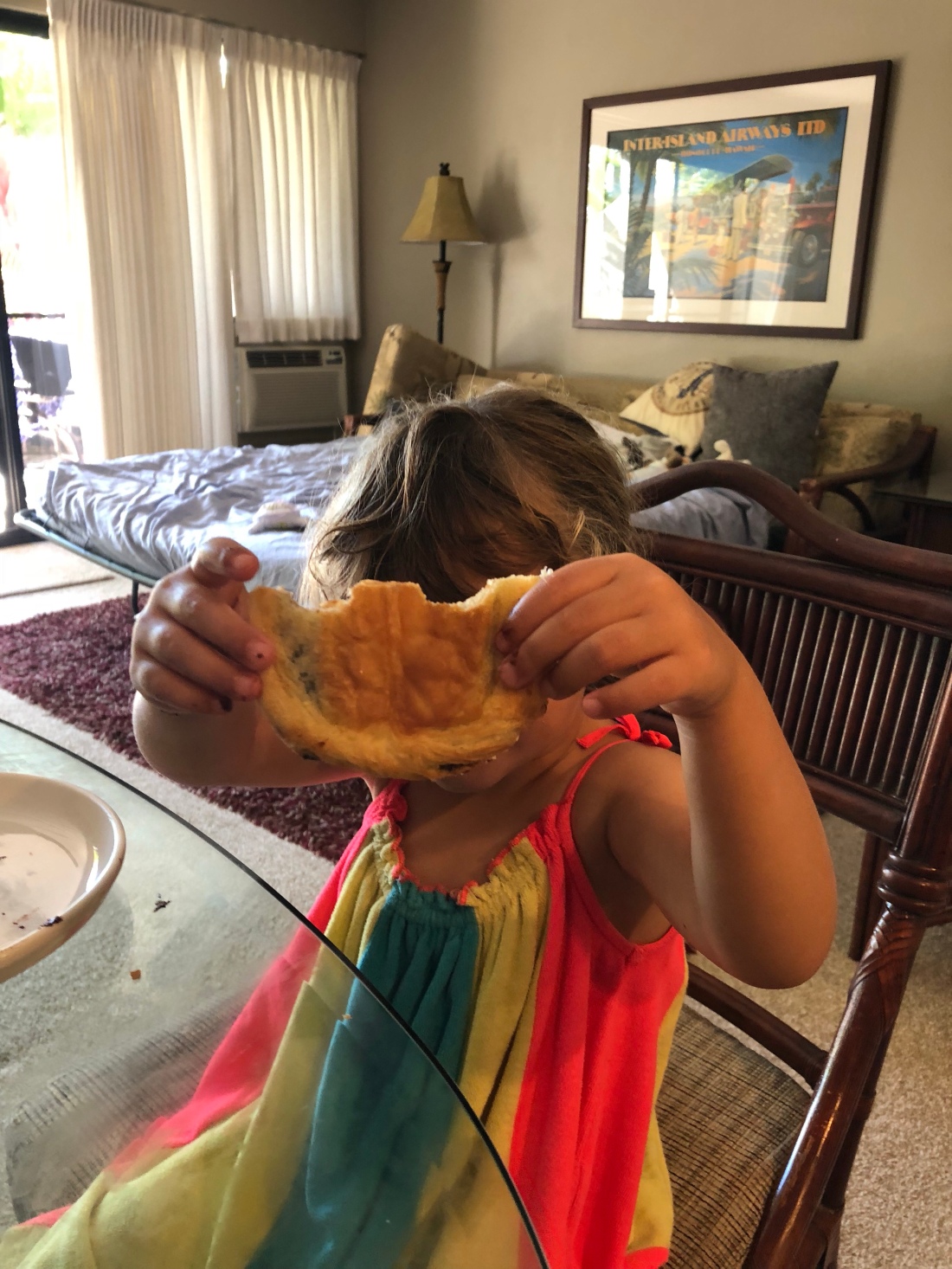 We needed more milk and some ant powder, as we have an annoyingly persistent line of ants leading from the sink to a crack in the granite worktop and can’t get rid of them, so we all walked down to the bus stop (it was now about 14:30) and waited for the #10 bus to arrive.  You have to use the exact change ($2 per person), so we managed to get rid of some of the weight in my purse which was filled to the brim with nickels and dimes.  Oddly, dimes (which are 10c) are much smaller than nickels (which are 5c) – all very confusing to a foreigner when trying to count lots of it out loud to the driver…!

Our Safeway trip was successful, and we bought everything we needed.  I was after some salmon for tea, and I found it odd that I could only buy salmon that had been artificially coloured… why???!!!

We had about thirty minutes before the return bus, and as it was so hot, we hunted down an ice cream store, where I treated myself to a banana bread batter ice cream and Bugsy had a chocolate ice cream milkshake.  Ian dosed up on the Vitamin C with a blueberry and banana shake.  Again, all shockingly delicious!

While we waited for the bus to arrive, I was approached by a local man who asked me “Have you seen the eyes and mouth of an angel?  You should look in the mirror then…”  Corny and hilarious, but hey, I’ll take what I can…!  In the meantime, Cornelia (who was wearing her beautiful new dress) was the recipient of many more compliments from passersby and other people in the queue for the bus, despite looking like this for most of the wait…!

With a stop off at the swings on the way back (Ian dashed back to the condo to put everything in the fridge), Cornelia and I ambled home, collecting fallen hibiscus flowers for her hair and just to hold and smell.  They are so sweet-smelling and if you could bottle the smell of Hawaii, this would be it. 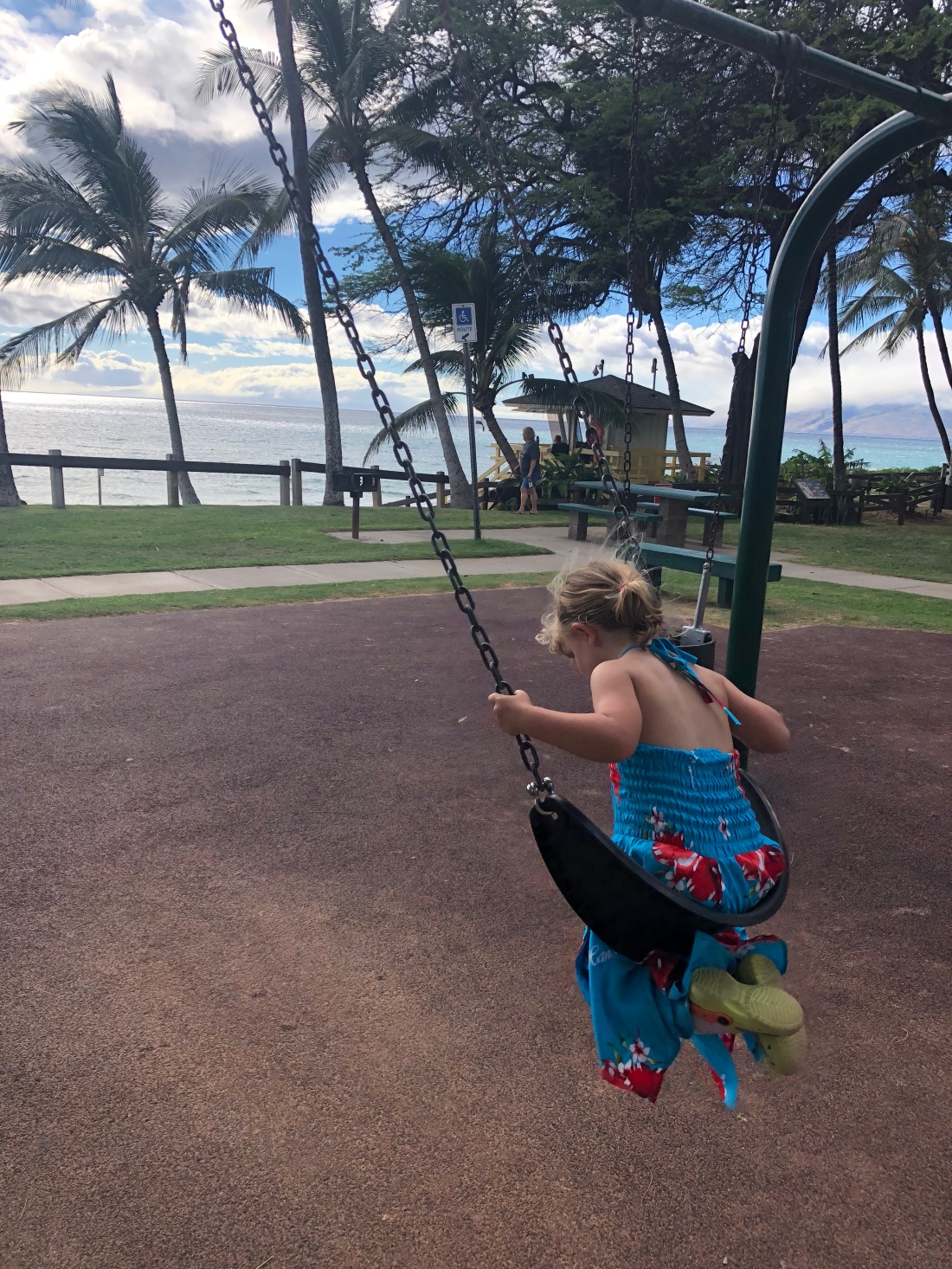 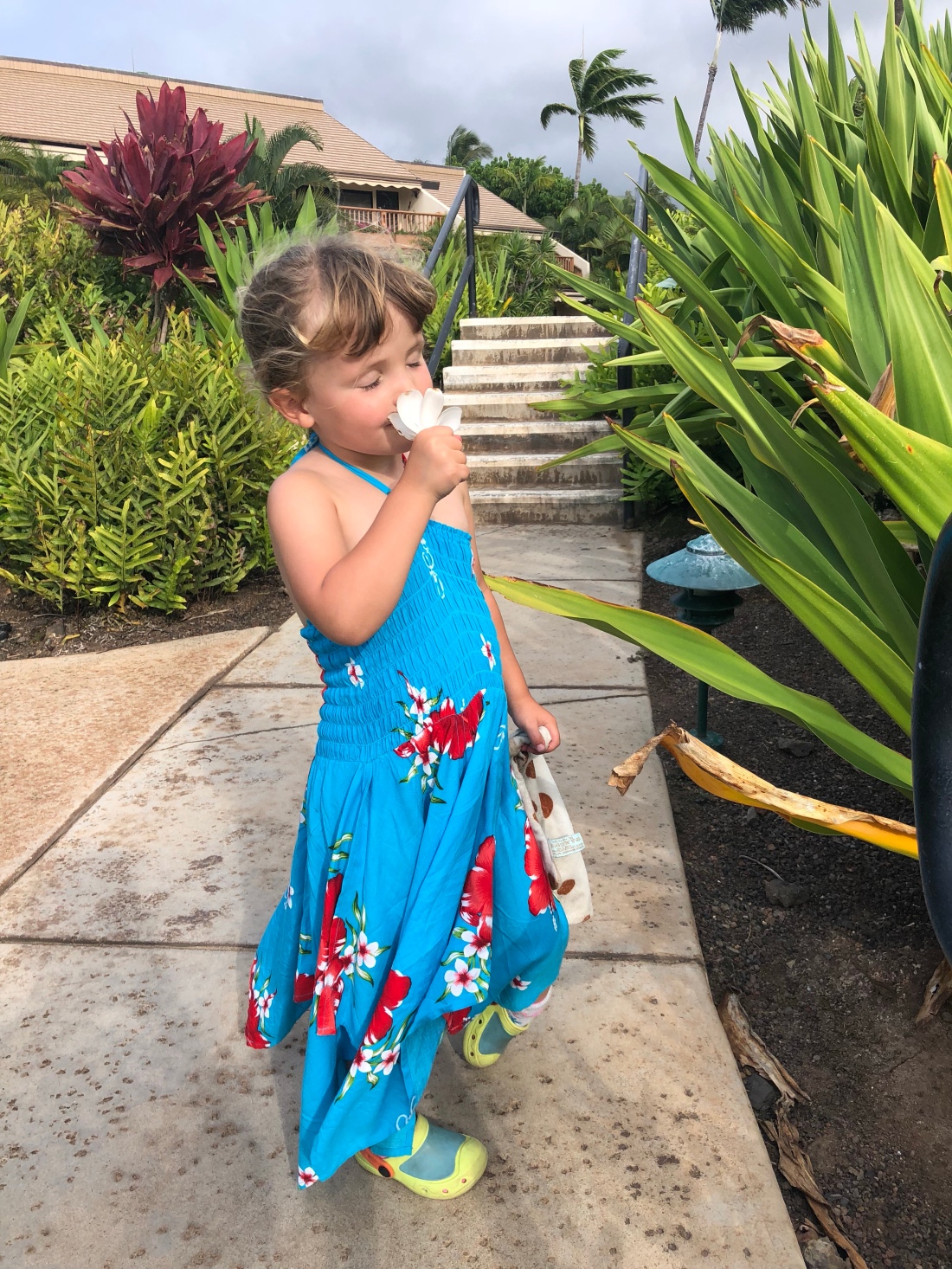 We spent the rest of the afternoon watching Ratatouille and scrapbooking.  I am really proud of her scrapbook.  It is bursting full, but it is completely up to date and all the maps, tickets and photos etc have now been stuck in it.  It will be such a great trip down memory lane for her in years to come, I hope.  Time flew by, and I was late getting dinner cooked, by which time Bugsy was a bit tired and not up for eating by herself, so I downed my glass of wine, sat her on my lap, and fed her most of her meal.  The plus side of her exhaustion meant she was completely ready for bed again, and I read her her stories, before Ian did Chapter 68 of Mumfi (he makes this up every night for her and it is quite marvellous).  She went straight to sleep and I took my second glass of wine to bed, where I watched Great British Bake Off before we turned off the lights and slept!

One thought on “Snorkels, shops and scrapbooks”