Despite the comfort of our bed last night, I was awake for several hours, unable to block out the regular beeeeeeep that was sounding continuously throughout the night. I tried making a song out of it in the hope I could lull myself to sleep, and meditative breathing too, but all tactics failed!  Nonetheless, when I finally did sleep, it was a good one, filled with epic dreams of storms and yurts and broken teeth!

Cornelia poked her little head through her curtains and giggled to let us know she was awake and she clambered down her ladder and in with us for a cuddle.

Once we’d dressed, we had our first breakfast in the RB and it all went rather well, despite being unable to use the microwave for Bugsy’s porridge. It didn’t appear to be working, but a quick Google suggested that it only works with an electric hook up. Ian had had to plug it all in last night in the dark and wasn’t convinced that it was properly connected, and once he’d tested the electrics using the generator, sure enough, the microwave worked. In the meantime, I’d heated up the milk and oats in a saucepan anyway, and Cornelia merrily chomped her way through her pink porridge (raspberry jam today).

After breakfast, I went up to the office to register and pay for our night. The woman was very warm and friendly and interested in our trip and I chatted to her for a while, before returning to the RV where we pottered around a bit, talking with our neighbours and reading stories, before it was time to store everything away and hope that it all rattled slightly less than yesterday. We definitely feel like newbies!!

It was cloudy and misty for long stretches of Highway 1, but along beautiful coastline. We stopped briefly to take a couple of photos of the beach, which you could barely see, before cruising on, listening to the Beach Boys, up and down, and round and round the coastal road. Each corner brought a new “WOW” from us, and I had to to keep reminding Ian that he needed to keep his eyes on the road!!  Although there hasn’t been much by way of wildlife (lots of cows and horses, one goat and several birds of prey), the houses were amazing – some were just old shacks, but most were modern, unique structures of dark wood and glass, one even with its own airstrip, clearly worth millions, all with glorious views of the Pacific Ocean! 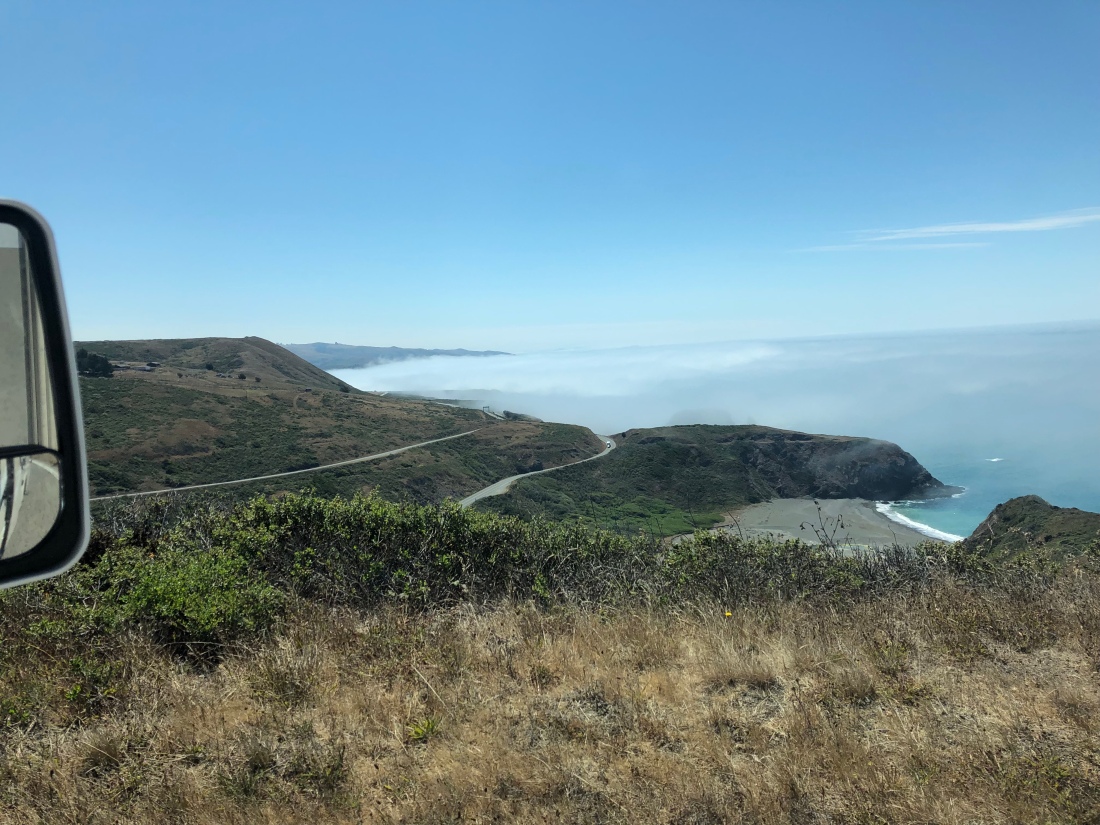 We arrived safely at our campsite in Manchester (by-the-sea), checked in with no problem, and drove on down the dusty tracks, through the trees, to pitch 50, our home for the next couple of nights.  Some of the trailers here are ridiculously enormous.  The largest we have spotted so far is about 40ft plus, appears to have two floors, and is being towed by a large 4×4!  They are obscenely big! 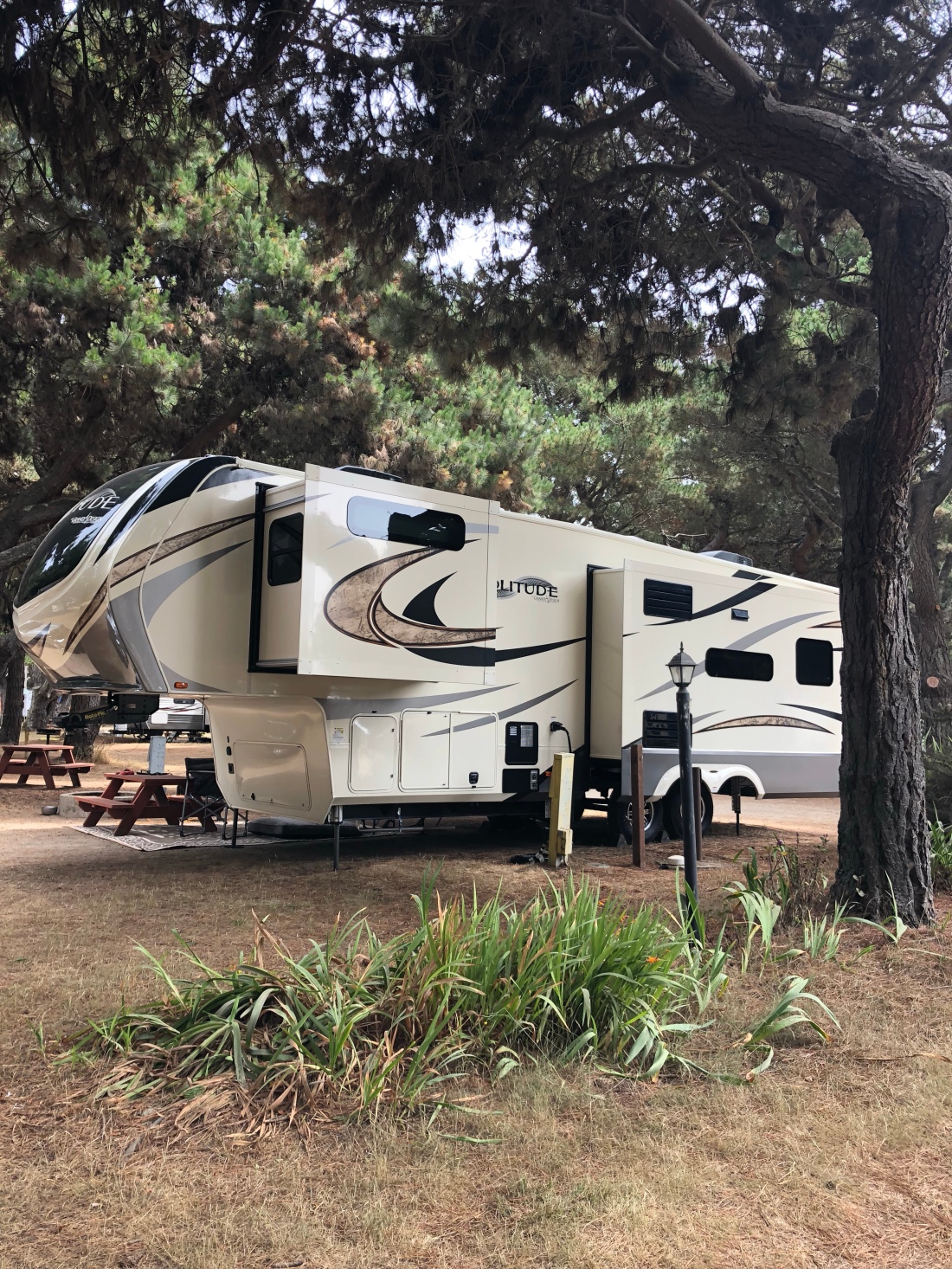 Once again, we had missed our usual lunch timings, and so our first port of call was a short drive down to the local store to complete our shop from yesterday.  It was rather expensive (think $7.50 for a packet of standard wheat crackers), so there were no treats today – just the refrigerated stuff we needed, a ball of nylon string to act as a washing line and the essential bottle of red wine.  Back at the site, I made up our sandwiches, and we ate a very late lunch.  Cornelia took a particularly long time to eat her sandwich and it was 16:00 by the time she’d taken her last mouthful.

She had been very keen to get to the swimming pool, so the delay in eating her lunch was a surprise!  However, I did take her to the heated outdoor pool, and we had a terrific time there.  Normally, when we go swimming on holiday, she isn’t that interested in practising her strokes and just wants to jump in all the time (and why not?!), but today, she was marvellous!  I think it helped that there was a teenage girl with her parents, who was diving like a mermaid, and Cornelia copied her, and did some great diving.  And THEN, just as Daddy arrived at the poolside, she dived into the pool (in a belly flop sort of a way) and front crawled her way across the whole width of the pool, taking breaths and everything!  I could not believe my eyes and was so proud of her!

We were in the pool for just over an hour, with one speedy dash to the restrooms, which were annoyingly situated outside the pool area and around the other side of the building (which housed the office, shop, laundry and play room), and as it was much colder out of the pool than in it, we had to be pretty fast on our feet!  She had thought she needed a poo, and keen to avoid a second “shart”, we were straight out of the pool!  As it happens, she just had a wee, and then we were back in the pool again.  As it approached 17:45, it was time for us to get out.  Cornelia did not want to leave the warm pool, but was promised a second trip tomorrow, if she was able to get out of the pool without causing a scene!  Ah, the powers of bribery and persuasion!

While I prepared supper (chicken, potatoes and veg for Bugsy, turkey salad for me and Ian), he hung out the laundry which he’d machine-washed while Cornelia and I were in the pool, and Bugsy took herself off to the dog playpark and kept herself entertained by watching the dogs there for a while.  Apart from a horrible bloodblister that I received by trapping my skin in a hinge, it was all going rather well!

And then tea time happened.  She took just aaaaaaaaaaaages to eat her supper, and was warned twice that she needed to be in bed by 20:00, if she wanted her bedtime stories.  However, she only just shovelled her last mouthful in at 20:00, and her plate was duly whisked away from her (with some food still on it), and she was sent to bed without her stories.  She cried for a bit, but completely understood that she had made this happen, and as I type this, she is snoring quietly, while Ian and I polish off our beers and chocolates! 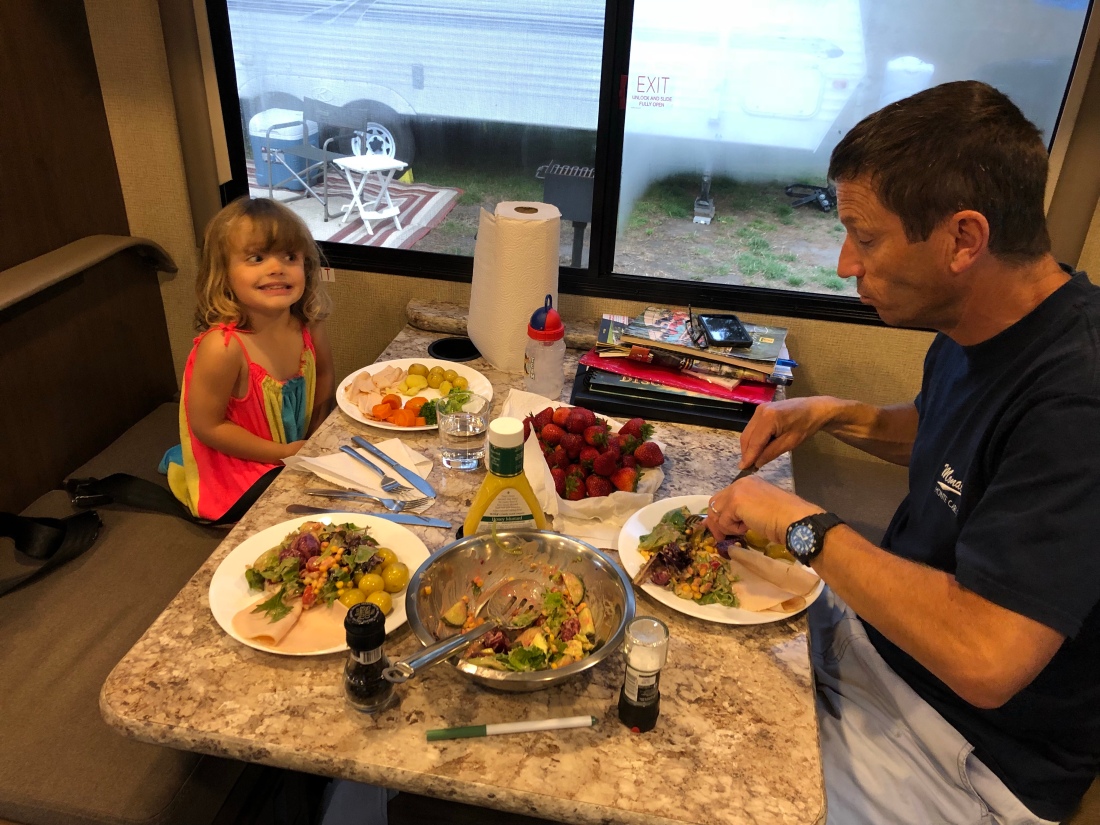 2 thoughts on “Manchester is better by the sea!”