Cornelia slept until nearly 08:30, waking with a monkey on her face and a pair of plaits still all perfectly in place. Apart from me accidentally bashing her in the head with Owly (her night light), she immediately dressed and was ready for breakfast. As we walked out of the door, she yelled that I’d promised her last night she could wear her Hawaiian dress to breakfast today. I’d made no such promise and she had a quick scream at me about it, until I told her that her tears were going to melt her monkey face paint away. Then I had to help her “take her tears away” to stop the monkey from disappearing.

Breakfast was good, and we enjoyed toast, cereals etc. It was too late for her to go for a swim (thankfully, as the pool was topped with an assortment of morning critters) and we packed up our things, called for the shuttle bus which Ian took, first to Lokothula reception to check out and then to the main reception, where Bugsy and I were looking in the shop for a new Gang member that she’d earned after completing her five new foods challenge. (Unfortunately, there was nothing suitable, but she was happy to wait until she finds one!) 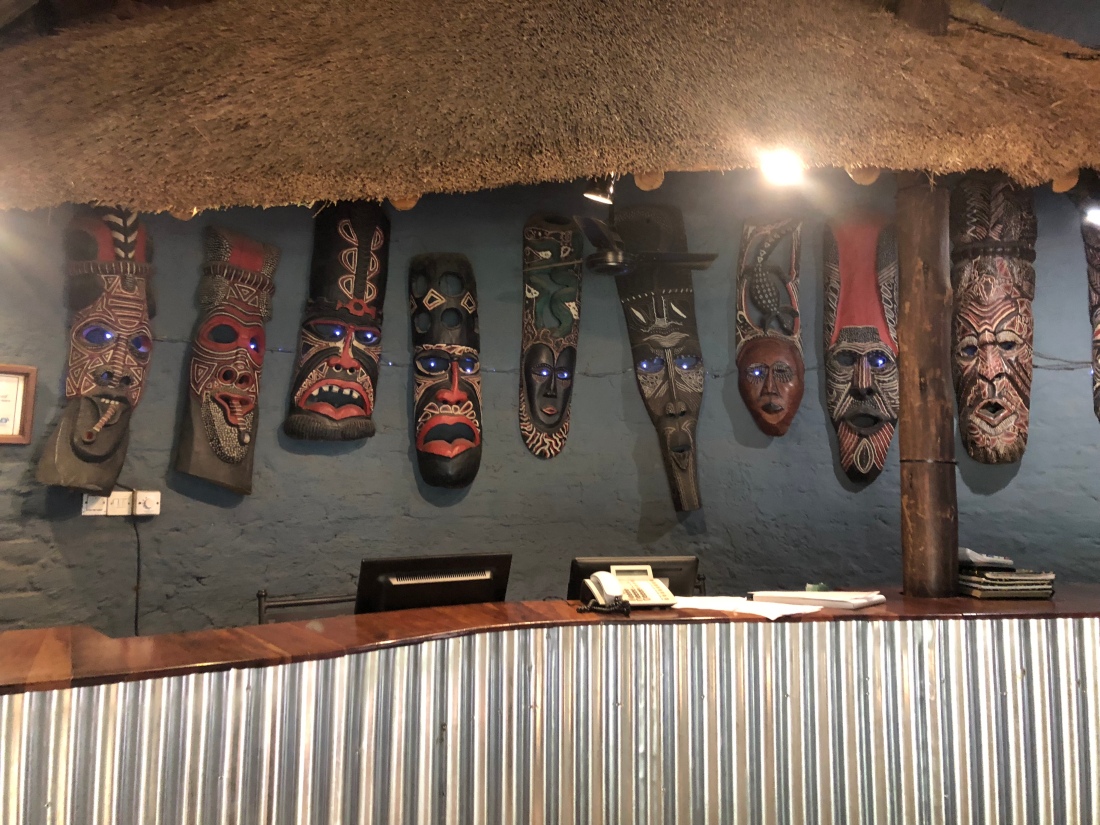 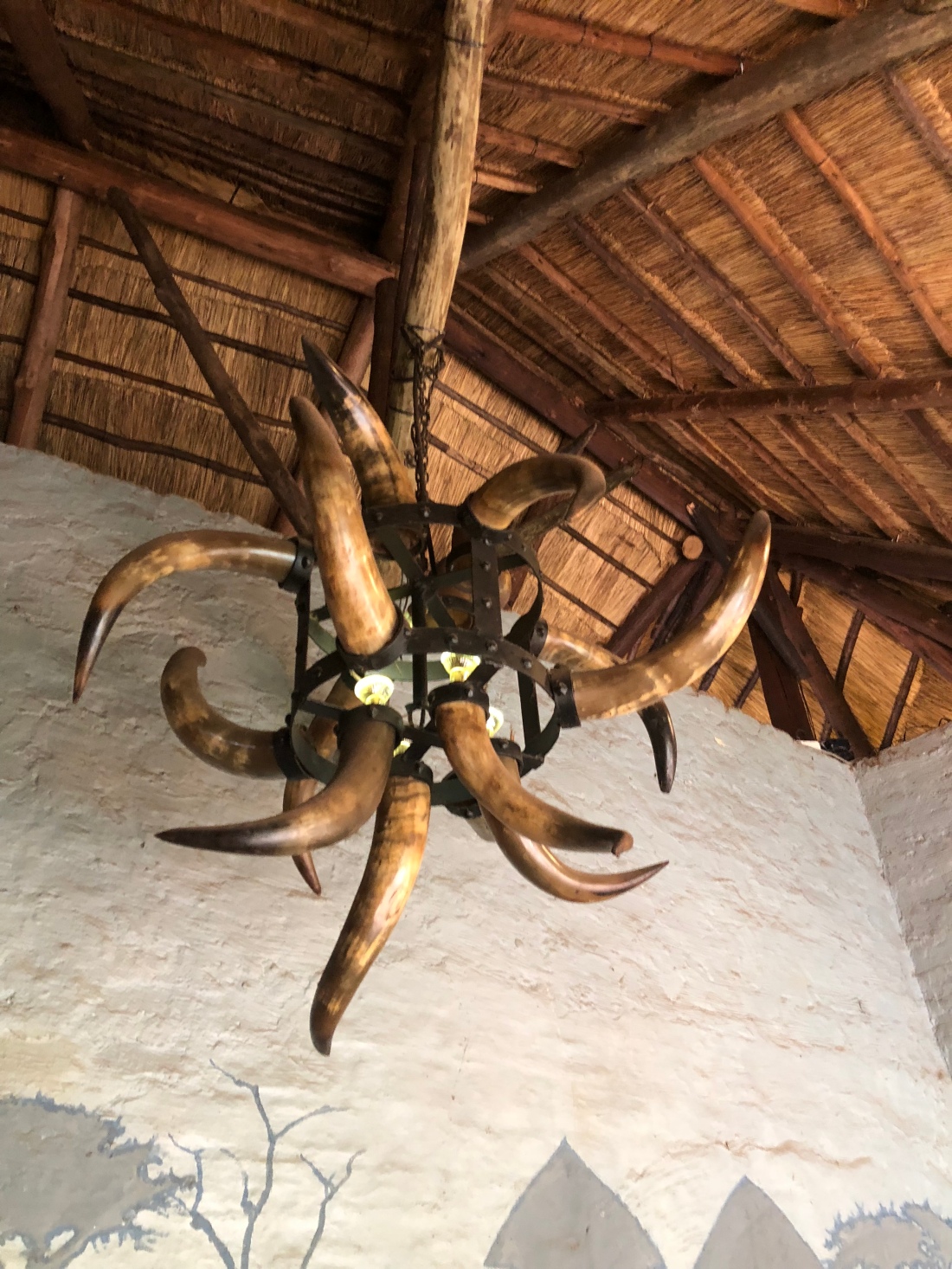 Our driver from Afro Honeyguides, Emmanuel, was waiting for us, and after a short delay waiting for the car in front of us to stop blocking the roundabout, we were off again. Annoyingly, I just missed taking a photo of the man in local dress, greeting and waving goodbye to every single car that drove in or out of the gate, with a huge smile.

On the way to the border, Emmanuel told Ian about the township where he lived and how water and electricity are inadequate there, as his township has expanded and there isn’t enough of either to meet demand. In the back of the vehicle meanwhile, Cornelia was pretending to show me TV programmes, reciting episodes of Peppa Pig and singing a variety of songs from Frozen…! She ended up talking non-stop for over half an hour telling me a made-up story about a lost turtle, a dog dressed up as a mermaid and assortment of other characters. It was utterly charming!

Emmanuel dropped us off at the Zimbabwe border and showed us through to the immigration office which was very quick and easy. We are feeling like old pros now! He introduced us to our new driver on the Botswana border, Navelle, and we boarded a proper safari truck, clambering up into the open-sided vehicle, and enjoyed the al fresco drive (note the wind-swept hair!) back to The Old House to collect BigBell and pay our laundry bill. 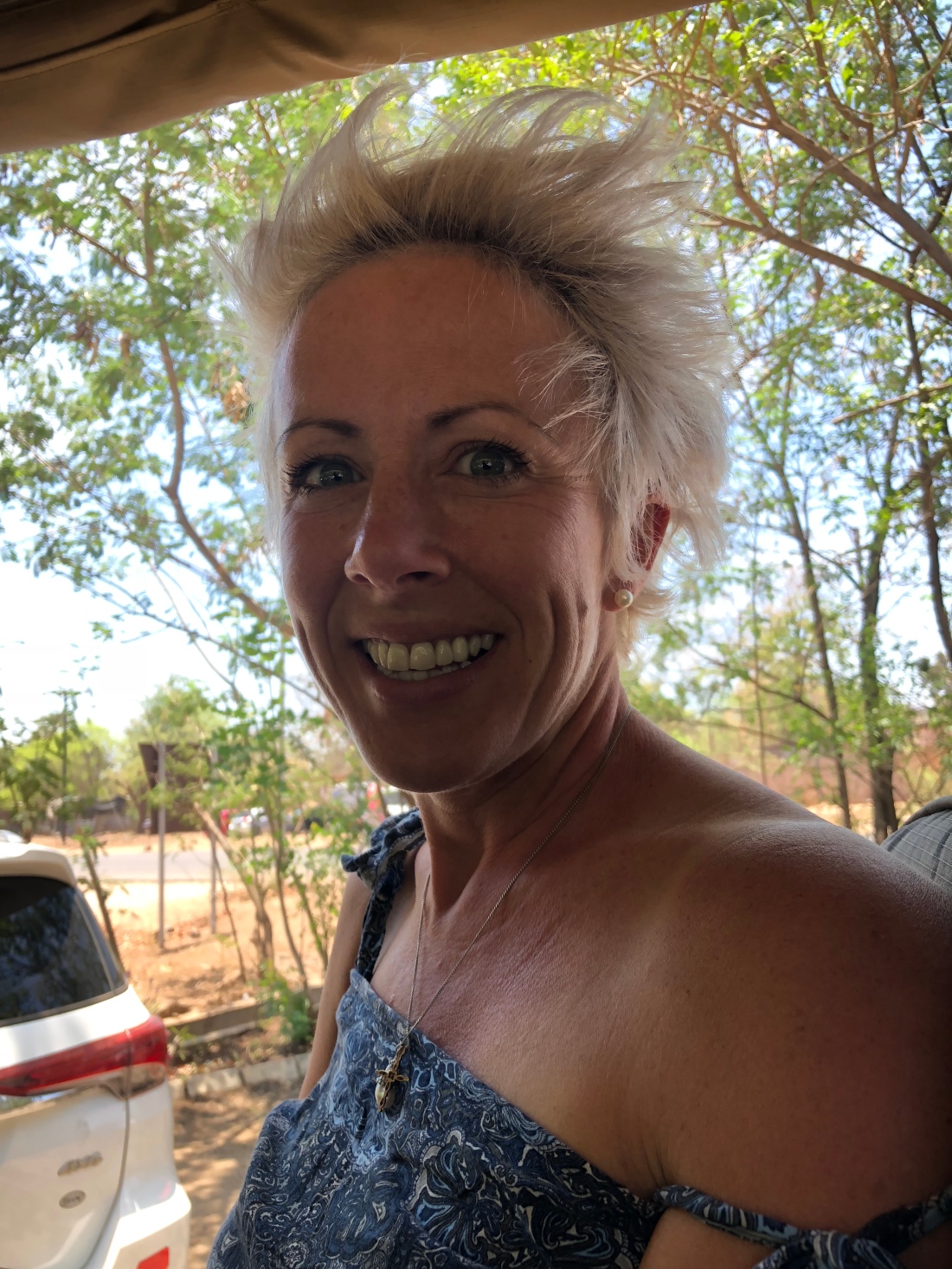 From there, we filled up with diesel, and I nipped into two supermarkets for water and snacks for the long journey ahead of us.

In a moment of excitement on an otherwise dull journey, we joined a queue of vehicles at an animal checkpoint, where we had to dip our shoes and Ian had to show the officer the contents of our fridge. Apart from a bag of apples that we had to hand over, all was fine. There didn’t appear to be any rhyme or reason to selecting apples over the cheese and ham we had in the fridge, but as one funny lorry driver observed, they just choose what they want for tea…!

The temperature was now “back to normal” and our temperatures gauge was working again (our car had been hand washed by one of the guys at The Old House when we first arrived there) and showing 37 degrees, when we passed through Nata, just over halfway to Francistown.

While Ian and I enjoyed listening to one of the two playlists that I have on my iPhone, Cornelia amused herself by tattooing shower pipes (so she told me) on her leg in black pen. 😂 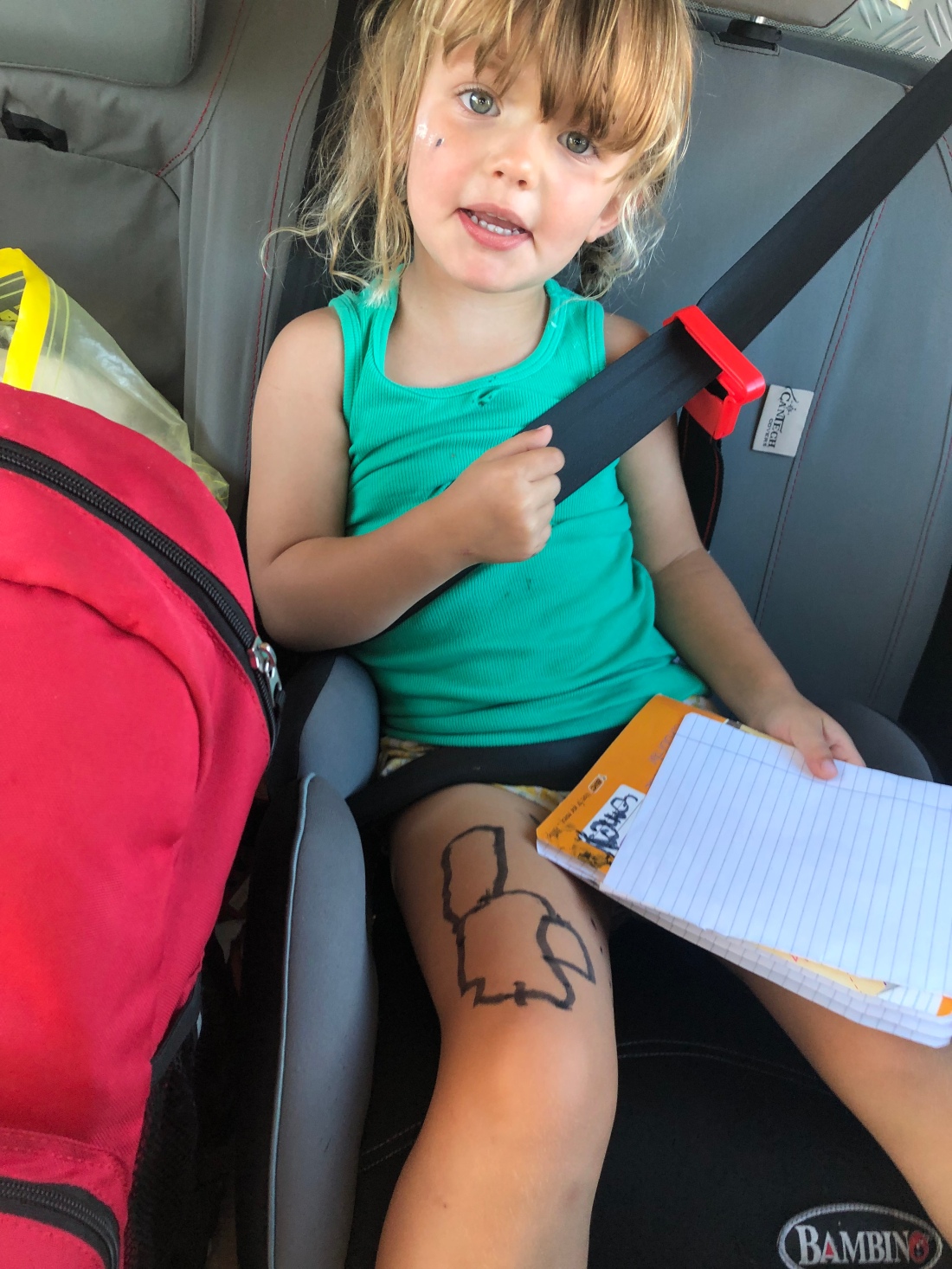 We were stopped again at the next veterinary checkpoint. We were allowed to keep the ham in our fridge in exchange for one of our beers, by Bisto, the not-so-official official checking us over. Ian opened up our kitchen area to retrieve our malaria pills that we had forgotten to take to Zimbabwe with us, and half our contents crashed out, including a jar of pasta sauce (tonight’s supper) which smashed on the ground, plastering Ian in tomato sauce. Whoops…

Once we’d tidied him up, we continued our long drive – again, the roads were very straight and very flat, so it didn’t make for an interesting journey, broken up only by donkeys in the road, amongst other animals!

The sun was setting on our arrival at Woodlands Kingfisher (so called because of the eponymous bird that lives there), where we were directed to our pitch. Hurrah, it was grassy! No dust, no sand, just grass! What a lovely treat!

I spied a cyclist, whose tent was pitched nearby, so went over with Cornelia to ask him about his adventure. His name is Francesco, he is Italian and is cycling from Cape Town (where he worked until recently) to Italy, by himself, and is hoping it will take him about six months (if, as he confessed, he stops taking all the detours he’s been doing. For example, yesterday as he was looking for somewhere to pitch his tent for the night, a guy stopped and asked what he was up to, then invited him to stay at his for the night, about 30 kms off Route. Francesco accepted the offer and it turns out that this guy runs a local orphanage with over 40 kids, and has himself had a few adventures in the past, and was able to reminisce happily. Sounded amazing and inspiring!)

We chatted for a while longer, before I excused myself to continue making dinner. I invited him to join us but he had ordered a meal from the campsite reception, and said he’d probably come over for a beer later.

Due to the lost pasta sauce, I made macaroni cheese – always a safe bet for my two, and as we finished our meals, Francesco came over to join us. His trip sounds so interesting and exciting. He said he has been amazed by the warmth and generosity of families with very little for themselves, offering him meals and company. I love hearing stories like this and they serve as simple reminders of the good we can do with kindness.

Cornelia was very happy to have some company, but was very tired and went into slightly hyperactive annoying mode, at which point Ian took her off to bed. Francesco and I chatted for a bit longer, but he was off to bed too, anticipating an early start in the morning. The heat of the days is hard on him, and he prefers cycling for half an hour or so in the dark, and avoiding the afternoon sun. He is covering up to 220kms every day (sometimes more, sometimes less) but is doing incredibly well and seems to be absolutely loving it. I’m so glad we met him!

I took advantage of the WiFi to load a couple more blogs then Ian and I clambered into bed. Just two more nights of camping now!

One thought on “Vet check”