We all had an unexpectedly restful night, and I woke up around 05:00 to watch the sun rise through the large netted vent next to my head in the tent. It was exquisite and peaceful, and I fell back to sleep a short time later. Ian woke up in a good mood, as did Bugsy who shouted “Mooooorning!” to alert us to her awakening! She came up for a cuddle with us, before we all started getting ready for the day.

As it’s a new van for us, we haven’t yet established a morning (or indeed any other kind of) routine about how things need to be done, but we managed to work around each other quite well, without getting in each other’s way.

Cornelia had a couple of Weetabix for breakfast, and a yoghurt (which she polished off completely before declaring that she didn’t like it… so I guess I’ll be eating “Disney Frozen” yoghurts for the next few days!)

We brushed our teeth etc and set off for Fish River Canyon, a 10km drive down along the dusty road. Despite the advice in our trip handbook being in capital letters and highlighted as an absolute essential thing to do, Ian was refusing to let down the tyres, because apparently, no-one else has done. And Steve and Elisabeth don’t do it. And because he didn’t want to stand outside in 33 degree heat. I said I’d do it, as the heat didn’t bother me, if he could show me how to do just one, but he declined that offer too… So, if we puncture on the gravel roads, guess who’s changing the tyre….!

We arrived at The Viewpoint and parked up next to the assortment of 4×4 vehicles, and went to read all of the really interesting information boards, telling us all about the canyon, the native groups and their war with the Germans in the early 1900s. It is, apparently (although there is some dispute about this) the second largest canyon in the world, after the Grand Canyon that, of course, we have already visited.

It is absolutely enormous and far less touristy than the Grand Canyon! No tarmac roads or cycle hire places here!

I walked along one of the footpaths to another viewpoint while Ian and Cornelia drove to meet me at the end. I loved that, as I rounded a bend, I was rewarded with a new perspective of the canyon. This time, I could see behind one of the cliffs and could work out where the river twisted and flowed.  The river is mostly empty at the moment but there are large patches of water that are visible from the rim. I expect they are enormous when you are down in the canyon! 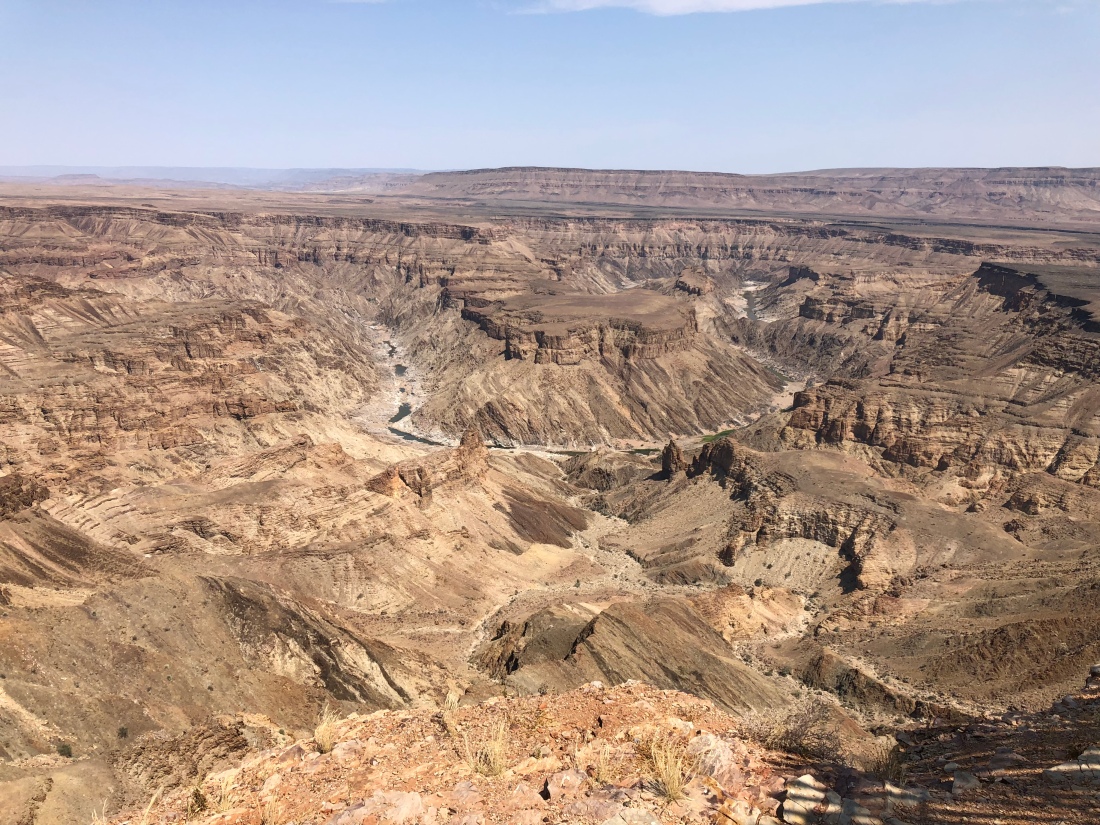 It was blazing hot in the sun, and I discovered that I sweat from my elbows and behind my knees, which is new to me, I think!

Once I met up with Ian and Bugsy, I took over the drive and Ian walked to the next point. While we waited for him to catch us up, we threw stones onto rocks, and Bugsy had quite a skill managing  to skim her stones over the top making “plink plink plink” musical sound. There were also big heaps of rocks that had been stacked high, so we clambered up those, mindful of potential scorpions buried under there… 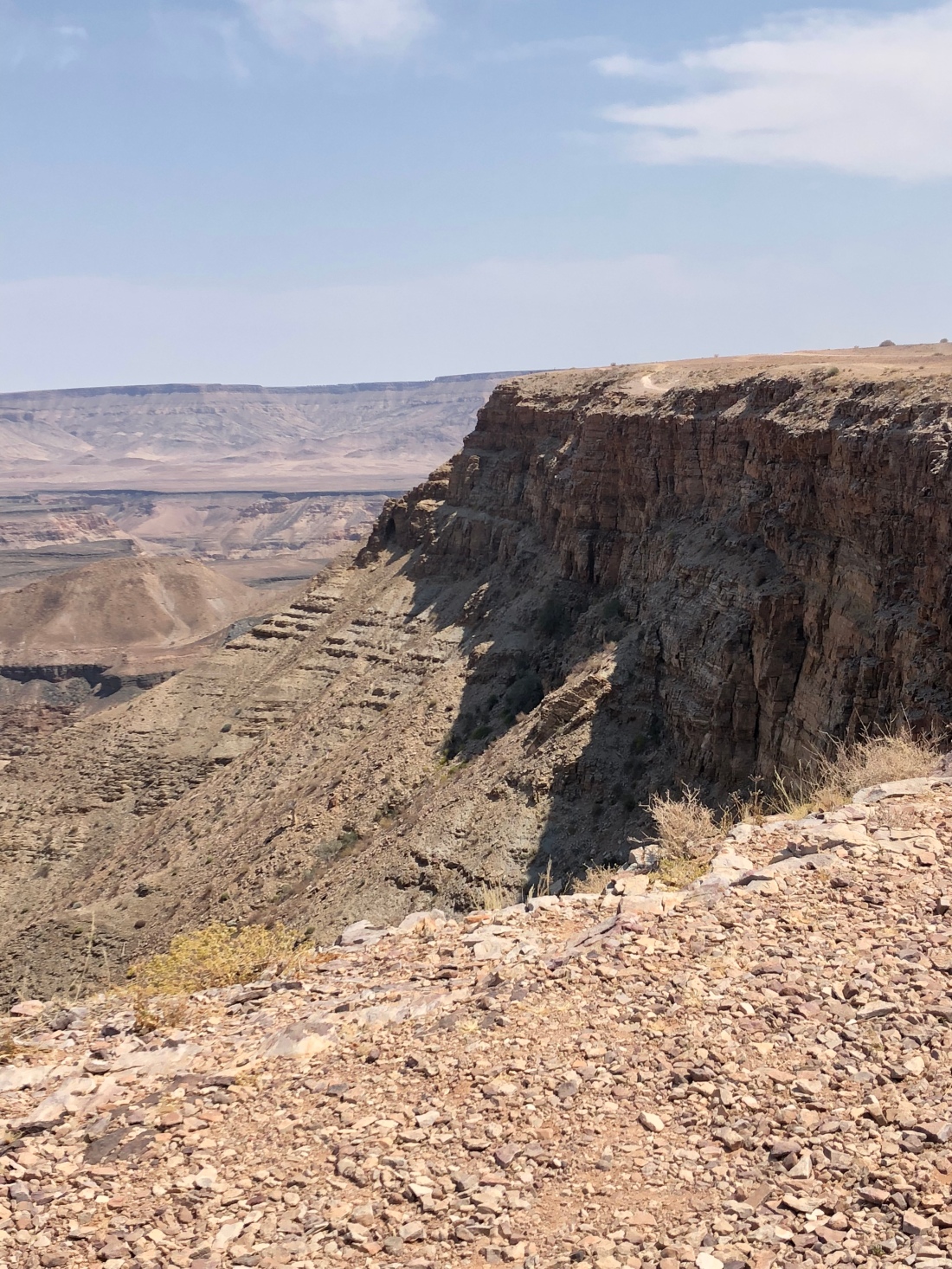 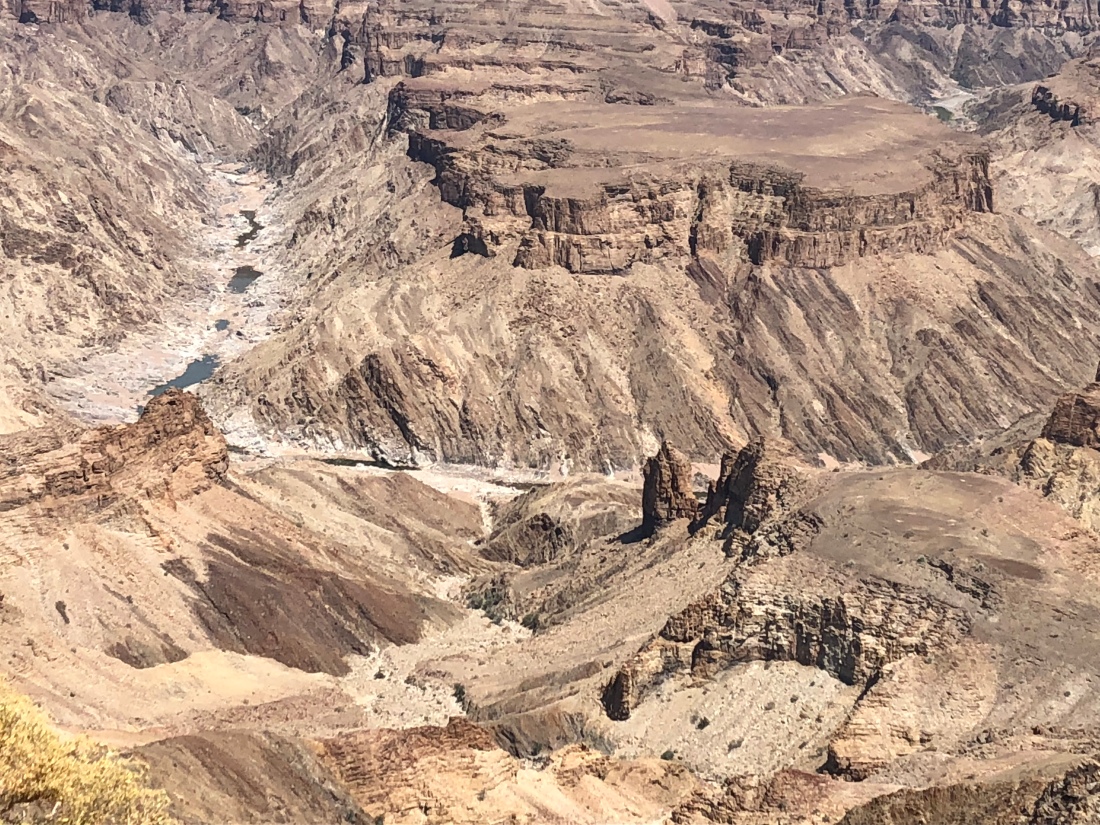 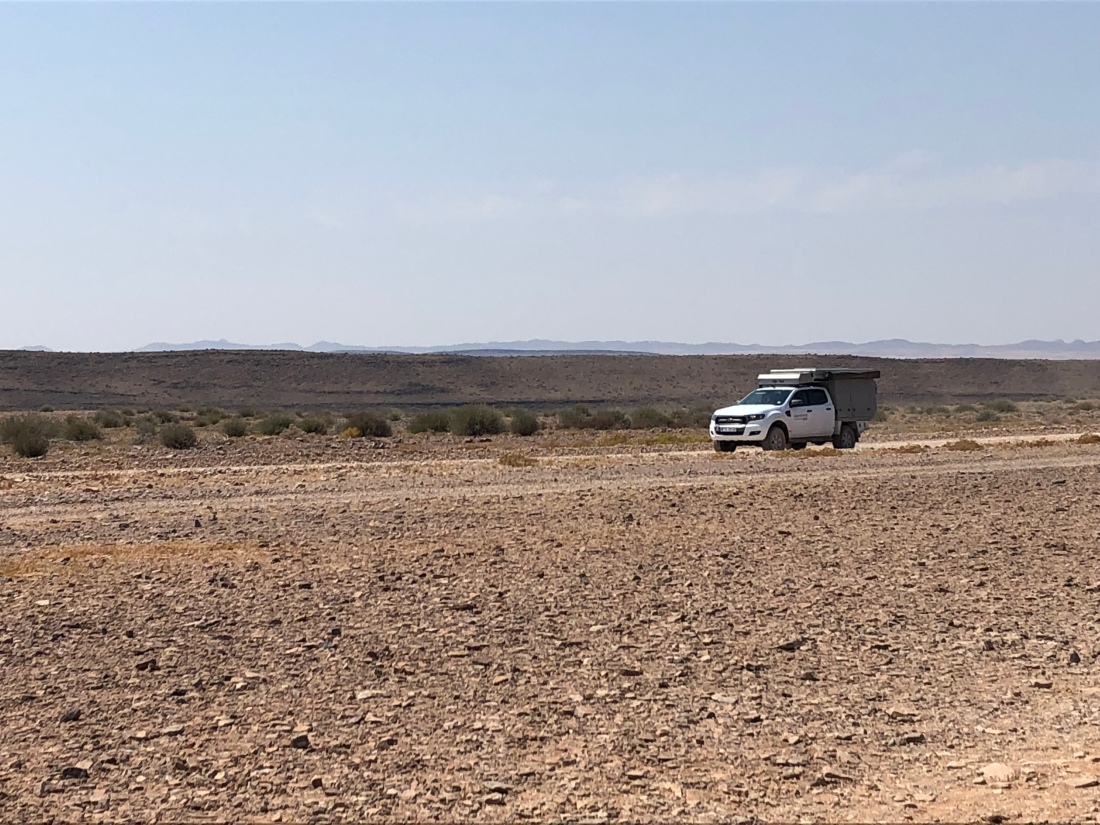 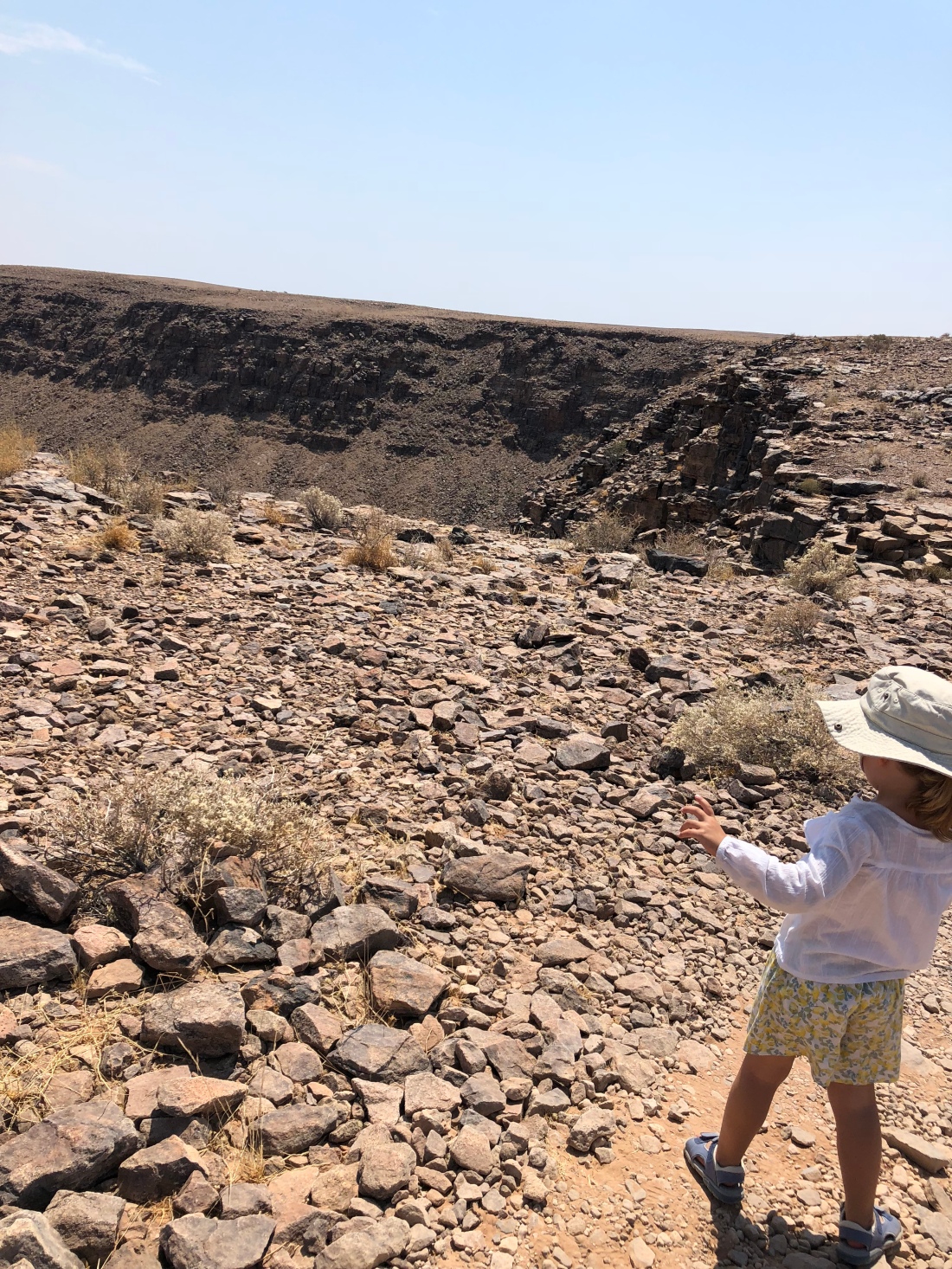 When Ian arrived, we walked up to the shaded area, to gaze in awe at the amazing views again and take a hundred more photos! Poor old Bugsy wasn’t really that interested, so we walked back to the van together stopping on the way to throw more stones and trying to hit targets and get the stones into the gaps of the rocks.

From there, we followed a dirt road around the edge of the canyon, stopping at one for lunch. Cornelia stayed in her car seat to eat her sandwich, out of the strong afternoon sun, while Ian wandered off to explore down the side of the cliff. He was quite some time and when he came back, he suggested that I take the nice camera and go down the path (carefully), which I did. It was one of those overwhelming moments when I was surrounded by complete silence but for the gentle wind, able to see around me for miles yet see nothing other than the rocks and shrubs. I was completely hidden from sight, and just sat on a boulder looking around me, making faces out of the rocks, before remembering that I should really get back to my mummy duties! Cornelia had obviously had some thinking time too, as she asked me how many days it was until I would die, then established that Daddy would die first because he’s the oldest, then me and that this would be okay, as she’d be a grown up by then, so could look after herself….! 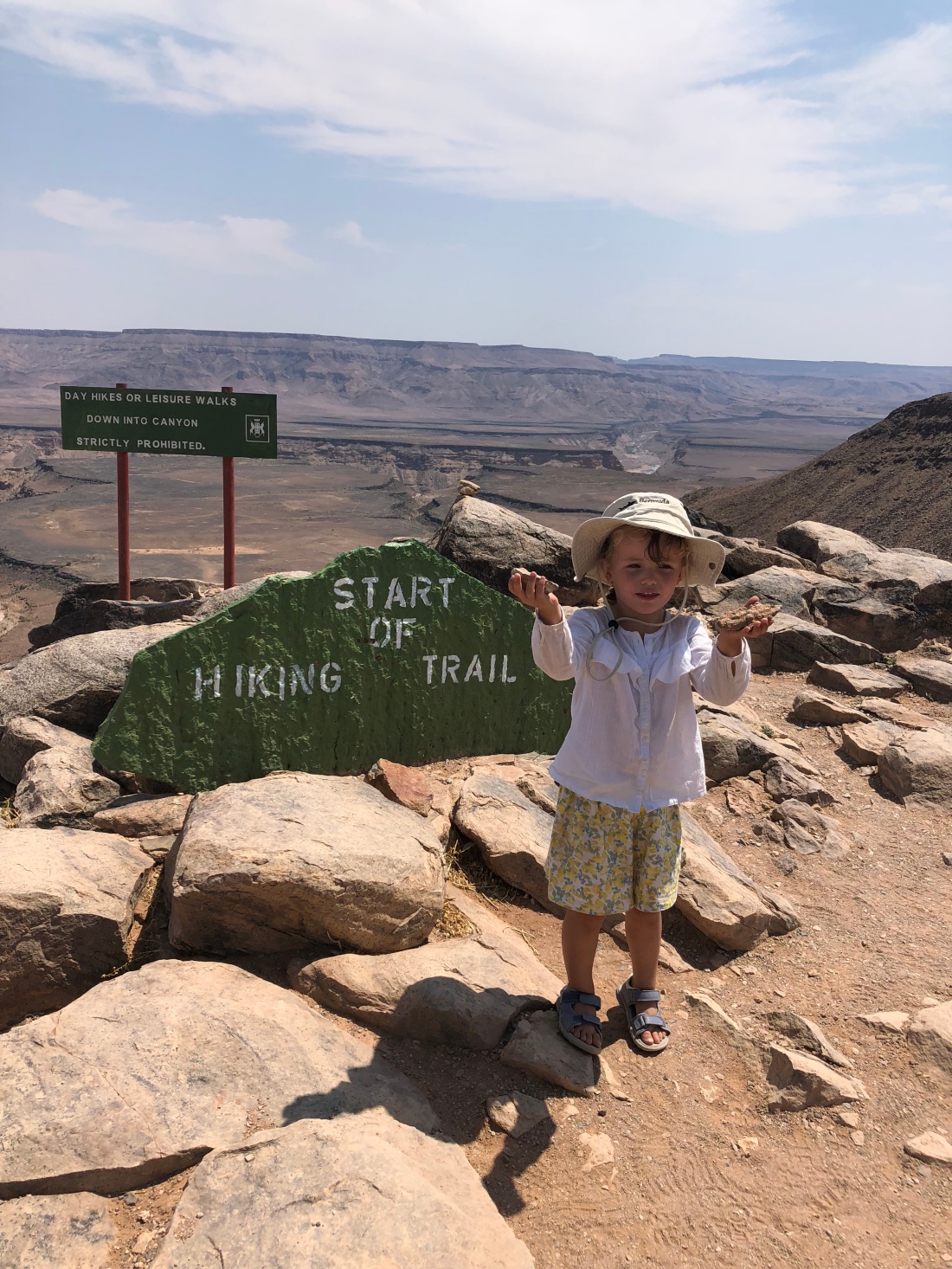 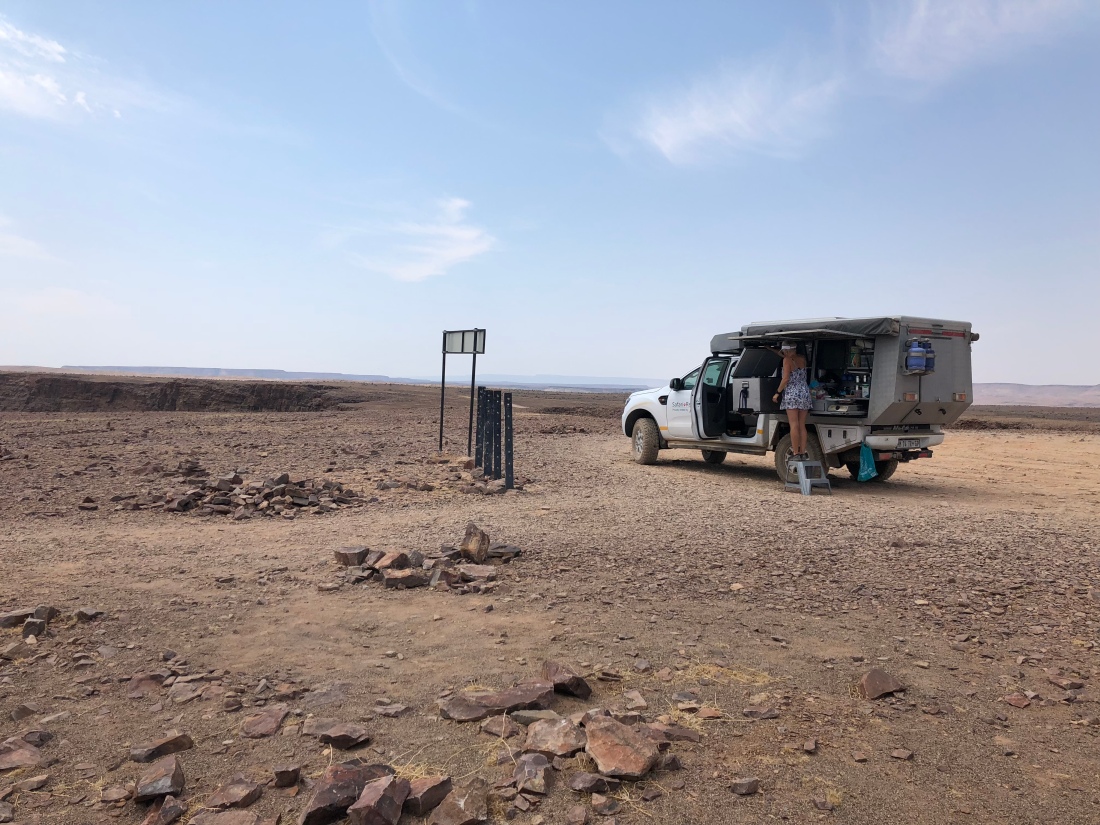 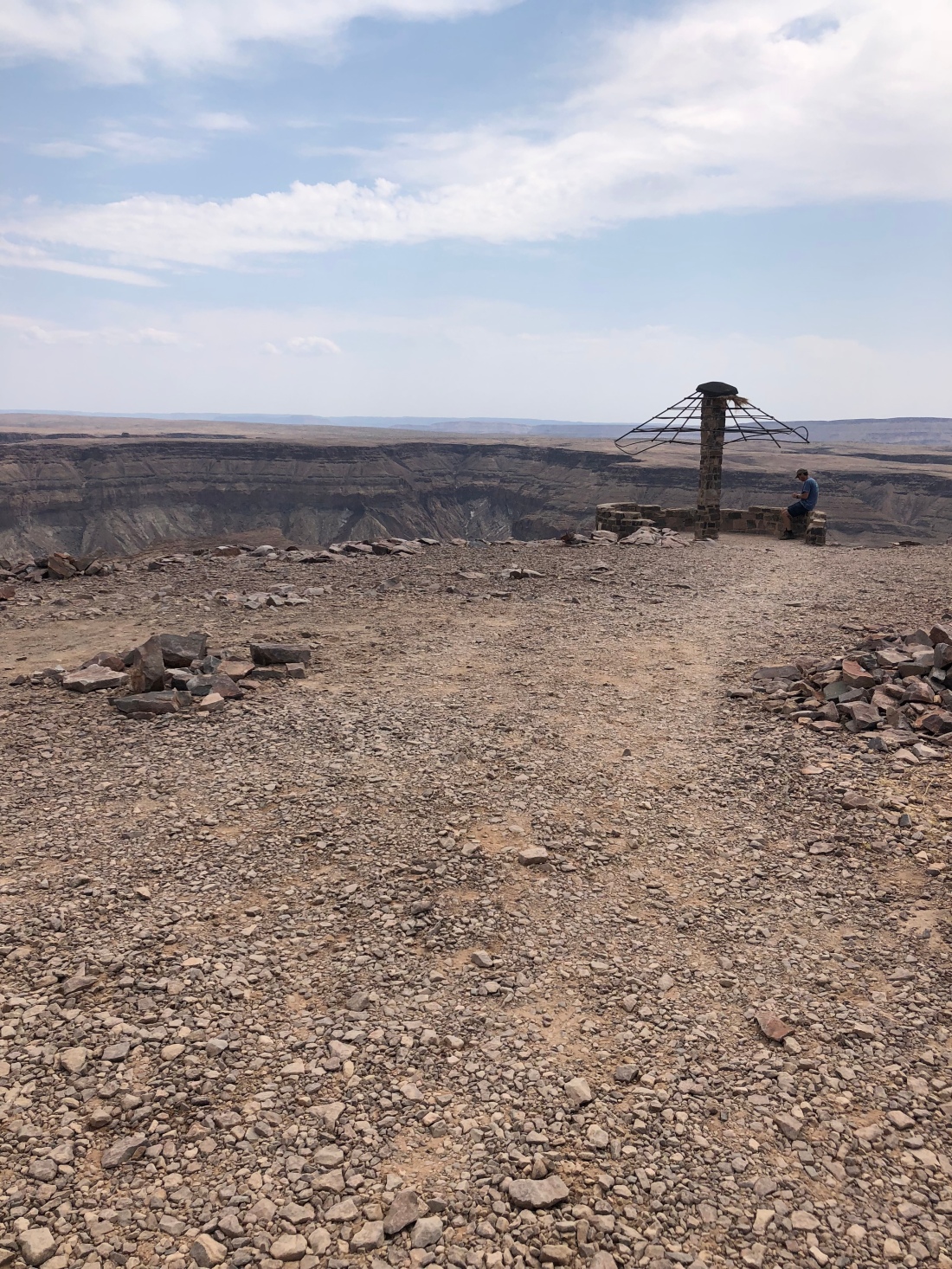 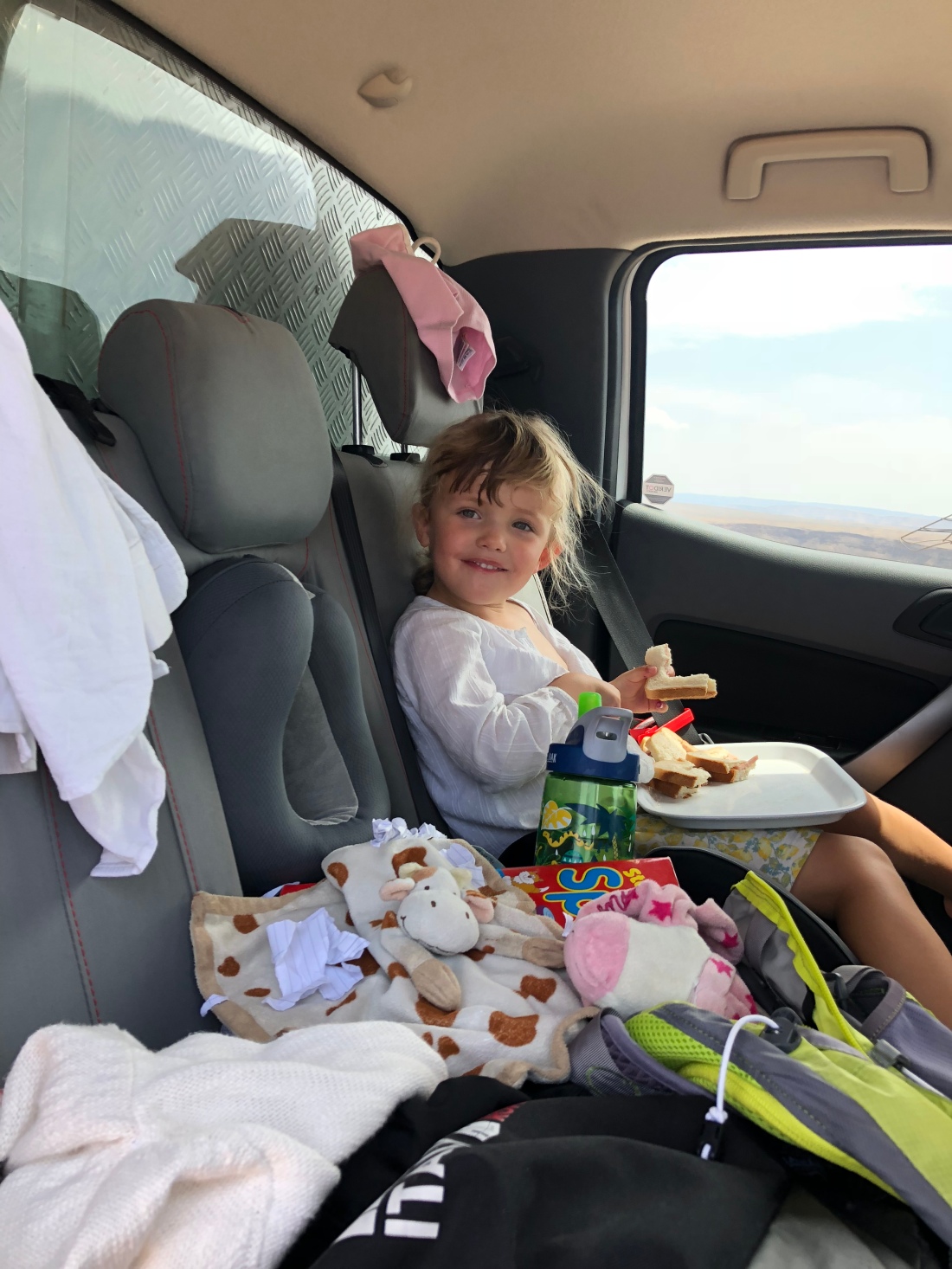 When we left Fish River Canyon, we decided to head to Ai-Ais spa hotel, with natural hot springs. It was about 45 minutes there and well worth the drive. On arrival, three baboons were running around and jumping off the cottage balconies. Ian and Cornelia watched them while I went to book us in and pay. We could use either the outdoor pool or the indoor one. As it was about 41 degrees outside, and blowing a wind which was like standing under the hot setting of a hairdryer, I decided the indoor pool would be better for us. Another cracking choice – it was great – empty of people, warm, clean and shallow enough for Cornelia to stand in but deep enough for her to swim properly! We stayed in there for nearly an hour, getting wrinkly and playing The Little Mermaid, and making bridges with our legs for Cornelia to swim under. 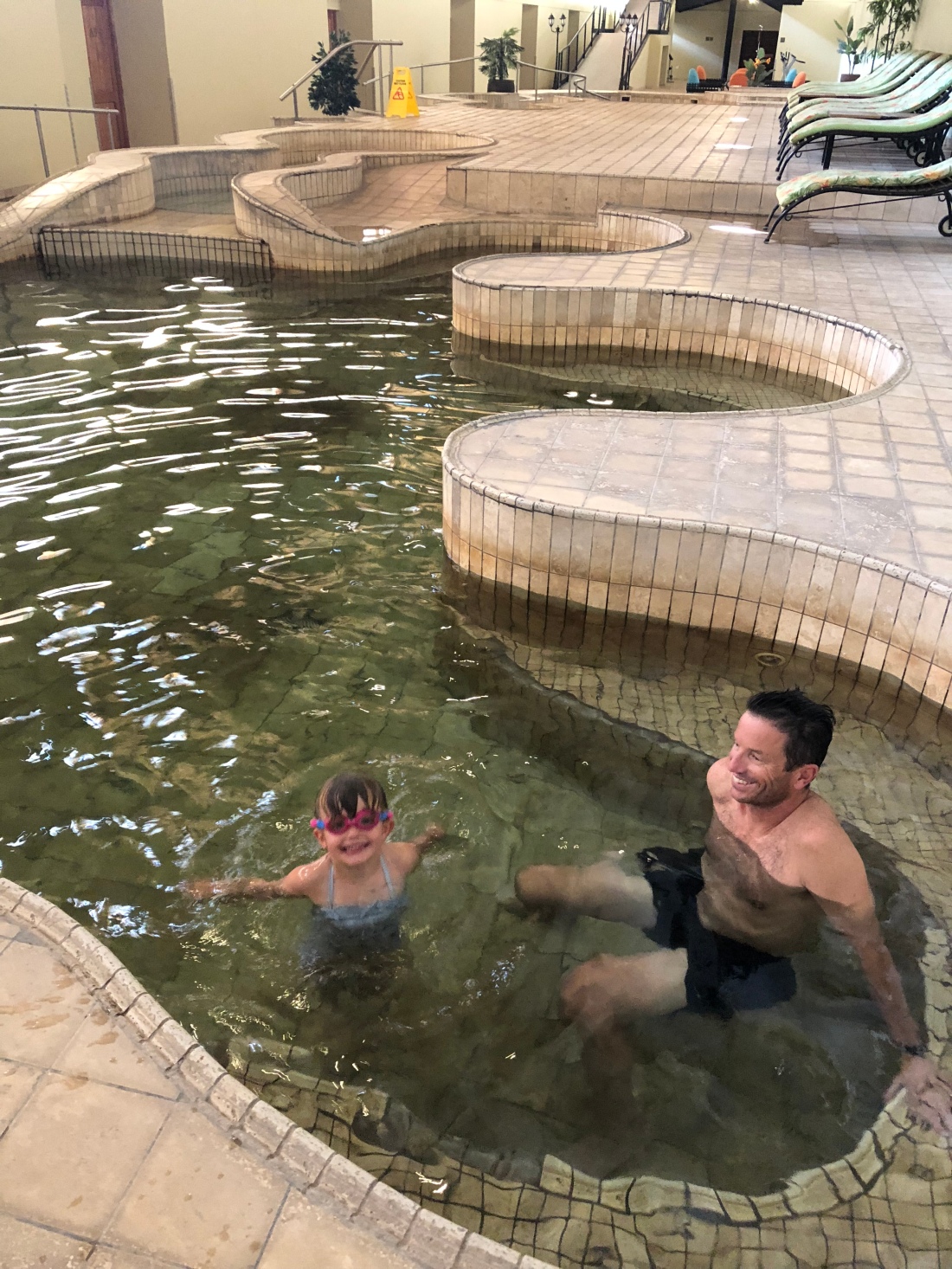 Ian rinsed off quickly then fetched our shower stuff from the van, so we could get clean now and didn’t need to have another one later. Then we sat in the outdoor bar area, enjoying a cold beer/water before heading back to Hobas. 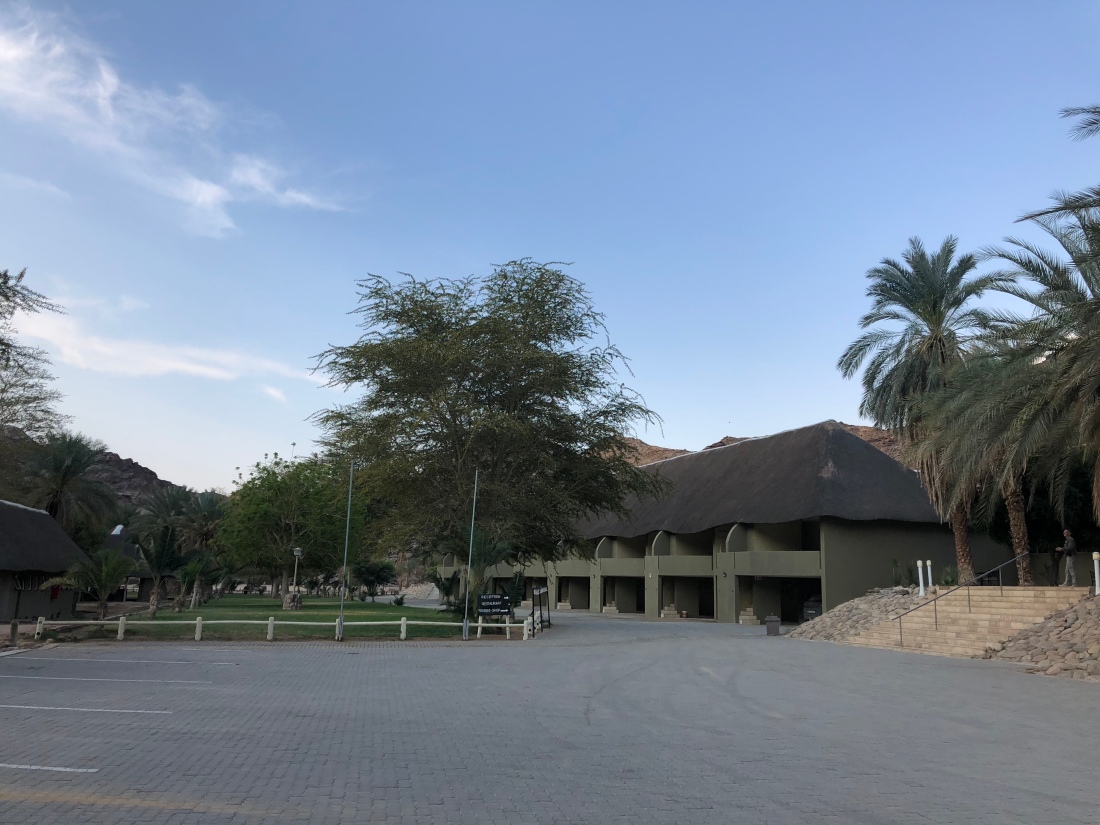 Cornelia fell asleep in the van and missed a spectacular lightening display in the distance which we could see from miles away, as well as an ostrich running across the road. She had been busy making rope, cotton wool balls, torn up dresses and torn up tissue paper out of paper, before she had fallen asleep about half an hour before arriving back at Hobas. On arrival, she curled up on my lap on one of the camping chairs until she let me know she was awake enough to put her dress on for dinner, which we had decided to have at the Quiver restaurant on site. The menu wasn’t extensive but it had chicken schnitzel, which Bugsy and I shared, and Ian had lamb. It was surprisingly tasty, and Cornelia loved the crunchiness of the schnitzel so much that she ended eating most of it and I had the chips instead! 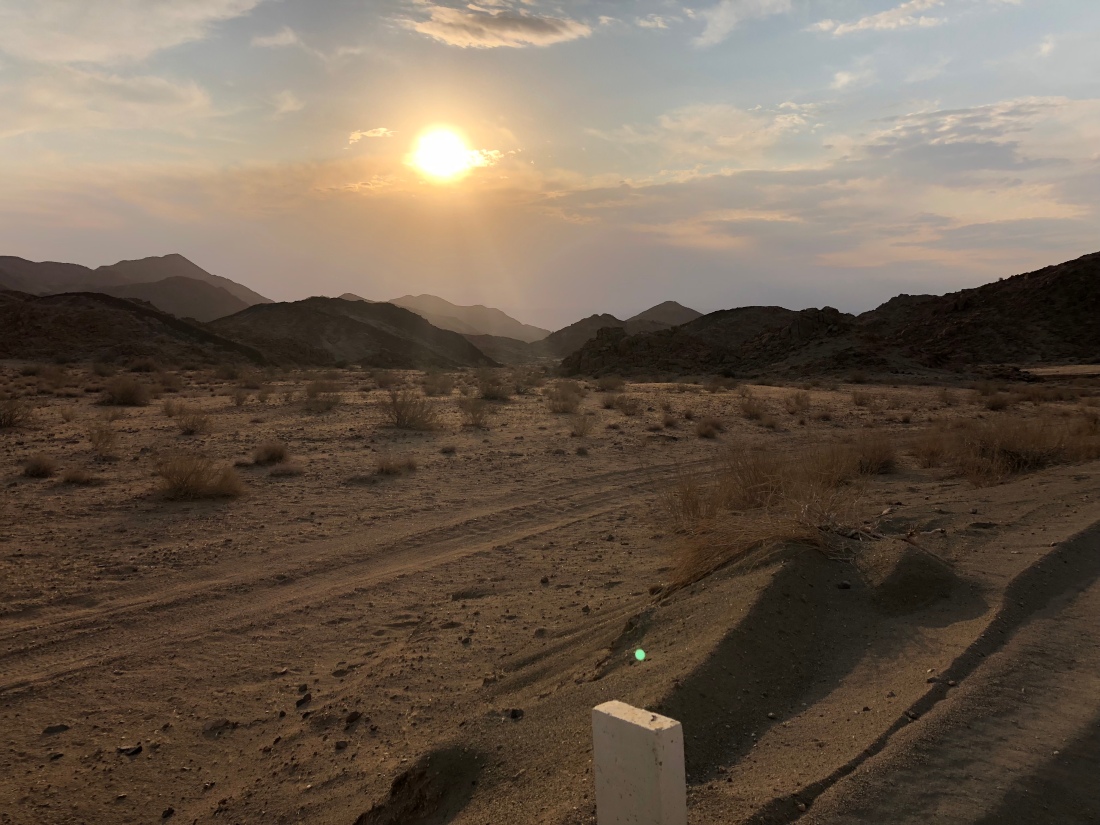 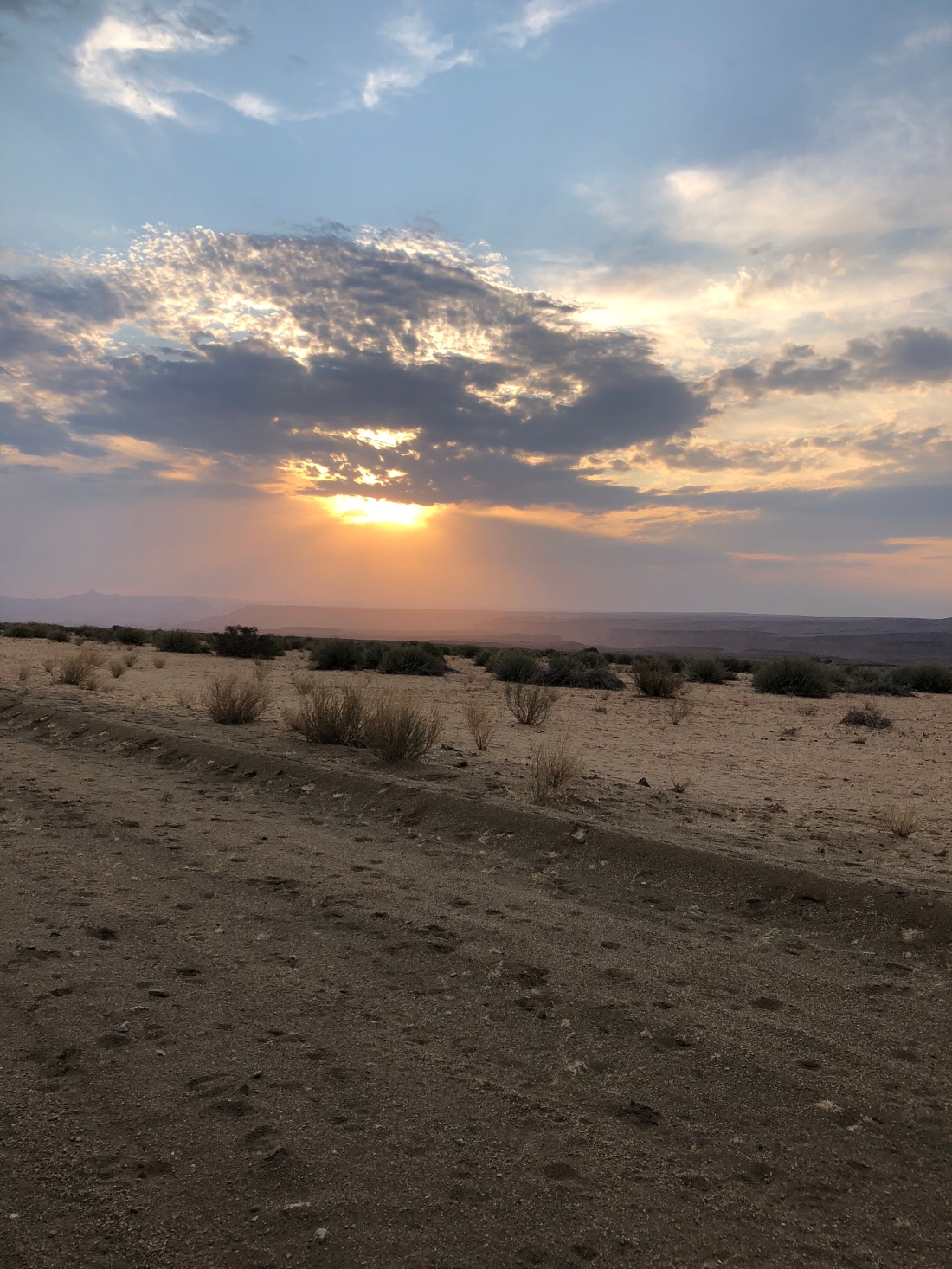 After tea, we went to brush our teeth together, and I love how she sees someone else do something and wants to copy them – tonight, she saw a woman wash her face and asked if she could just splash her face too, casually leaning over the sink, cupping her hands and throwing water carefully over her face,  before dabbing it dry. All without mentioning that she’d just seen another person do it. Cute. 😍

After her stories, Ian told her a Mumfi story (tonight he stole a school tent so he could try out camping in a nearby field, and got into lots of trouble) and she lay down to try and sleep. Ian sat outside and I went to bed too, just to see if I could sleep that early in the dark. I tried writing my blog, but there were a few insects in the van tonight, which were immediately attracted to the light of my phone, so I gave up, closed my eyes and dozed off, until Cornelia screamed and started crying. She had rolled into a bolt sticking out of her bed and hurt her eye, so I kissed it better and cuddled her back to sleep, before returning to bed only being disturbed again by Ian coming to bed sometime later.

One thought on “Fish River Canyon”