We all had a decent night’s sleep at last and woke up feeling energised. We didn’t have to check out until 4pm, so took advantage of having another day in Helsinki by taking the ferry to Suomenlinna, an island about 20 minutes away.  There is an extensive complex of fortifications on the island, parts of which go back centuries. The tram journey and subsequent walk to the ferry port were a terrific way to get a sense of Helsinki, which has a completely different feel to the Baltic states we have seen recently. The architecture is bright and bold, and the main streets are lined with (mostly expensive) stores. We had to walk through a street market to get to the ferry stop, and the stalls were selling reindeer hides, knitted wares, as well as amazing-looking donuts, crepes, fruits and fish! A complete assortment of yumminess! I’m still trying to hold back on the over-indulgence, so managed to bravely stomp through resisting temptation. We clambered on board and up to the top deck from where we could admire the coastline of the city, demonstrating perfectly how old and new can mingle.

As the ferry set off, so a seagull flew alongside us, tracking us closely for the entire journey! We thought he might swoop down a couple of times, but he just flew off with his friends as we drew close to Suomenlinna.

We were given an island map on arrival, and Ian immediately spotted a toy museum that we thought Bugsy might enjoy, so decided to make that our first detour, via a church surrounded by massive chains and cannons, that required “silent visitors”. Cornelia did very well, whispering quietly “Why silent?” before asking if we could light a candle for Grannie Annie who always lights a candle in church. So, Grannie Annie, there are candles in churches and cathedrals all over Europe that have been lit by Acorn for you! 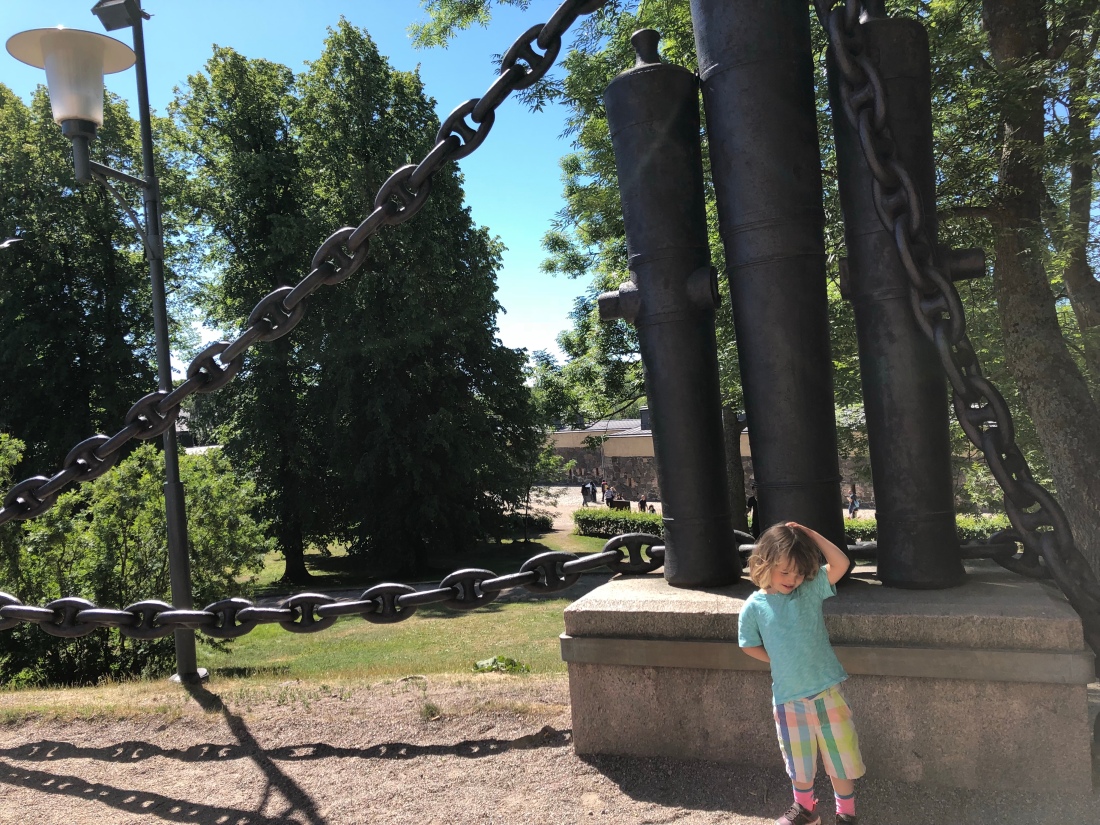 The toy museum was interesting enough, but I was glad it was small. There are only so many creepy dolls I can look at in one go! Mind you, some of the tea sets were exquisite, and Cornelia said she was looking forward to seeing Nanny Enid so she could play with her tea set…! The items on display range from the 1800s up to the 1990s, the earliest being a German doll from 1830. 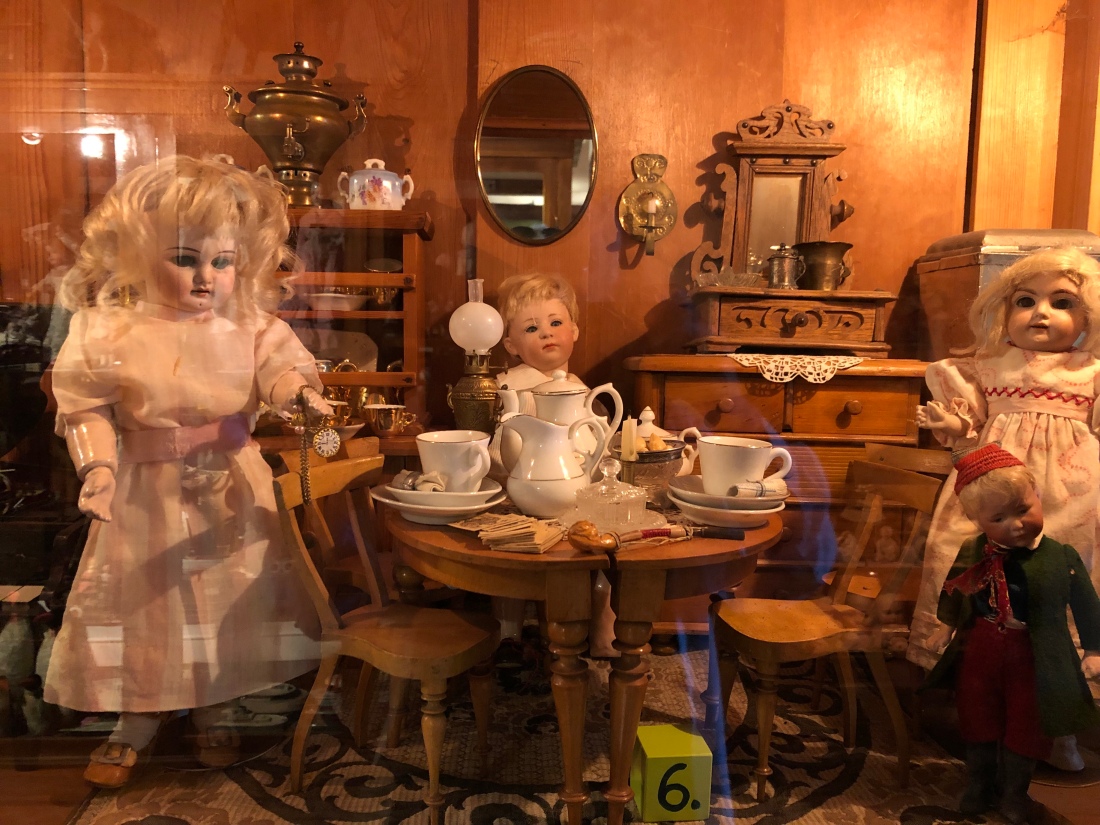 We were all getting a bit cranky so I knew it must be time for lunch! We bagged a bench in the play park and Cornelia ate her sandwich in record time, so she could have a play. There was a fireman’s pole that wasn’t too high from the ground, and she managed to wrap her legs and arms around it and lower herself down without falling. She was as excited as we were. At least, until it was time to leave…

She tried the “lying on her back in the dirt” for a few minutes before realising that we were some distance away with our backs turned, quietly ignoring the outburst. This worked a treat, as she came bounding up to us grabbing our hands and saying “Let’s go!”.

We didn’t have loads of time left before we needed to get back to the apartment, so we walked as briskly as we could to the King’s Gate, stopping for various photo opportunities.

After a brief loo stop, we legged it back to the ferry with 15 seconds to spare. Ian had Cornelia on his shoulders, so had an extra workout! The return ferry was quite empty, so we had a decent seat on the top deck with a great 360 view. And no seagull stalking us this time! 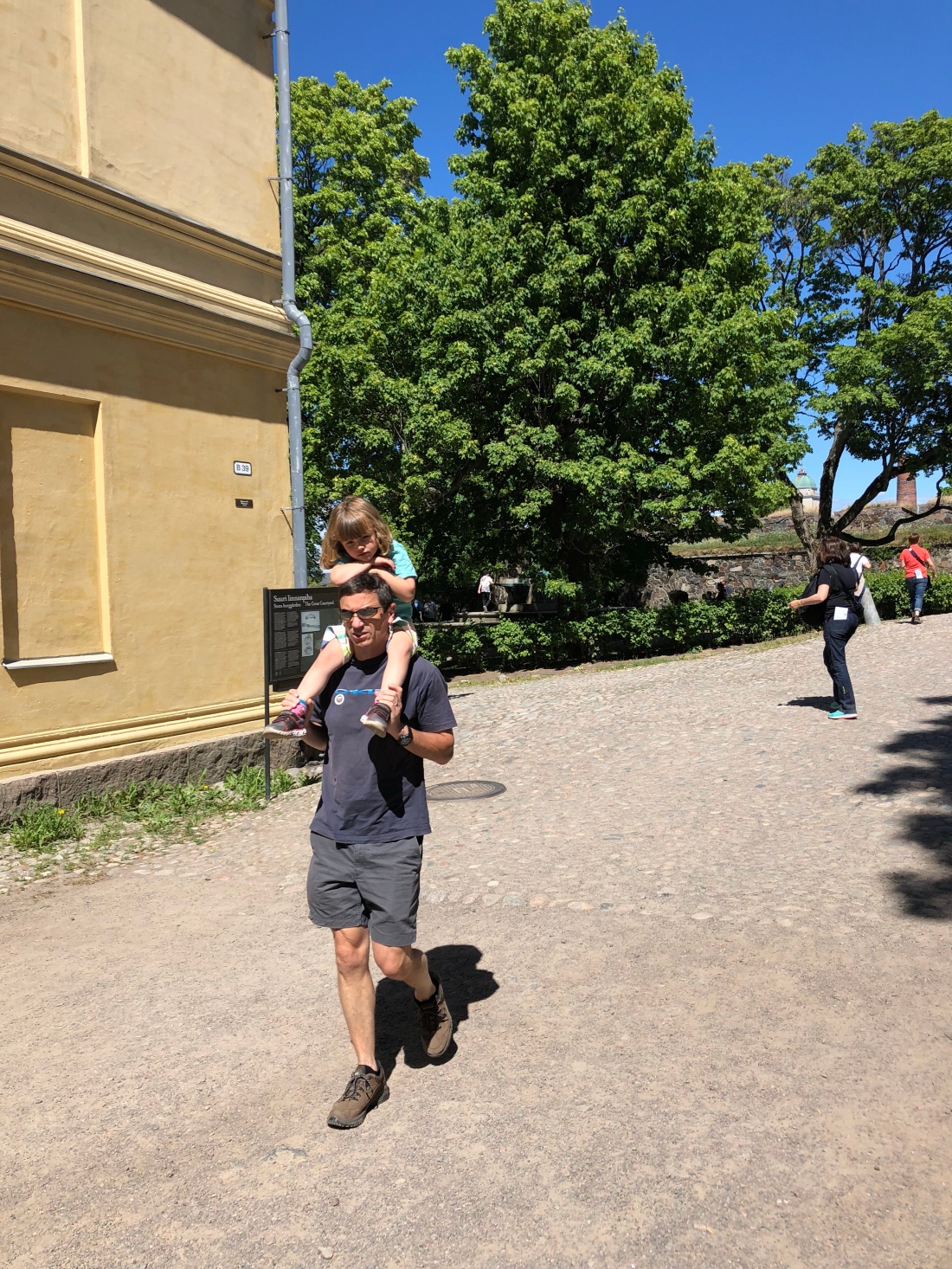 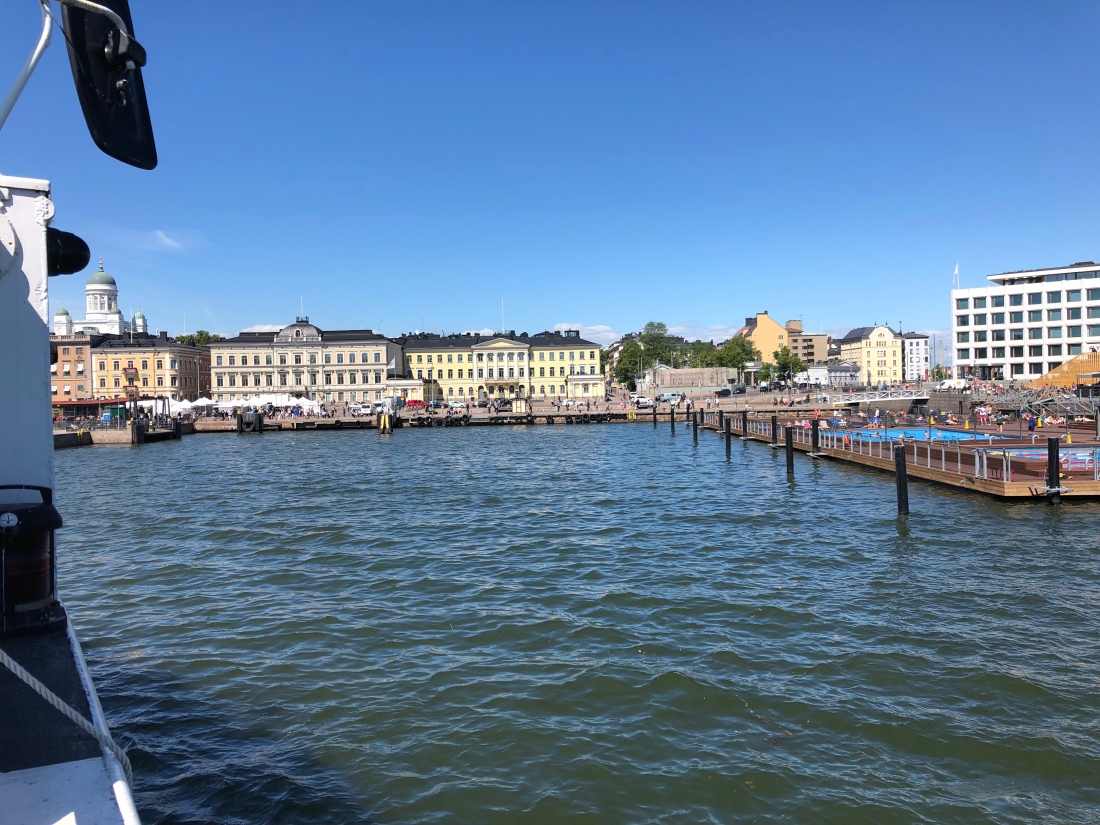 As soon as we arrived back at the apartment, Ian went off to collect Bluebell and I packed everything up ready for him to load. Unfortunately, our fridge bag contained an open orange juice carton, which spilled over everything, so he spent some extra time cleaning all the stickiness off before the items could be restored in Bluebell’s fridge.

Cornelia decided to do an enormous poo, at the same time the owners returned to clean the flat (16:02…) so I had an awkward moment explaining that my daughter was just stinking out their loo before we left…! At least they could see it was true and didn’t think it was me or Ian….! Ian arrived back too, so it was all momentarily chaotic before we thanked them and set off for the ferry terminal again.

This time, we needed the West Harbour terminal, as we were taking the Princess Anastasia overnight to St Petersburg. Despite epic construction works, I managed to navigate our way to the long-term parking, only for us to be completely confused as to where to walk, as foot passengers, as there was no info on my booking confirmation. Ian was confident that we should head in the direction of the ship, and I felt it sensible to follow the “foot ferry” signposts, which led us in the other direction.

We split up, heading opposite ways, but as I walked further, I became far less sure that I was going the right way. I had Cornelia in her “piggy back machine” so decided I would turn back and try to catch up with Ian. Sure enough, just as we reached Terminal 1, Ian rang to say he tho got he’d found the right spot, and sure enough he had. Phew! We were literally ten metres away from him, so joined back up to check in together.

I asked if there were any cabins we could upgrade to, but the ship is full, due to the World Cup having started. To my great horror, St Petersburg is hosting a match tomorrow, I think, between Iran and Morocco, but I am hoping that this beautiful city will not be overrun with football fans. Eurgh…..! I feel in two minds about our visit to St Petersburg, largely due to the Syrian conflict and my opposition to Russia’s involvement, with its support of Assad and the killing of civilians. Yet, this is meant to be a world trip and I suppose it will inevitably include some potentially controversial places.

Cornelia was very excited to be on a big ship, and quickly ate her penne bolognese in one of the many restaurants, as the ferry left the port, before escaping for some fun in the kids’ area. Ian supervised while I dawdled through Duty Free, trying to prevent the look of horror at some of the prices on things that I’d buy in the UK without even thinking! (Mostly chocolate, I should add!) In fact, all I ended up doing was changing €50 into roubles so we could have some breakfast and lunch tomorrow, but neither Ian nor I have any idea if that will be enough! 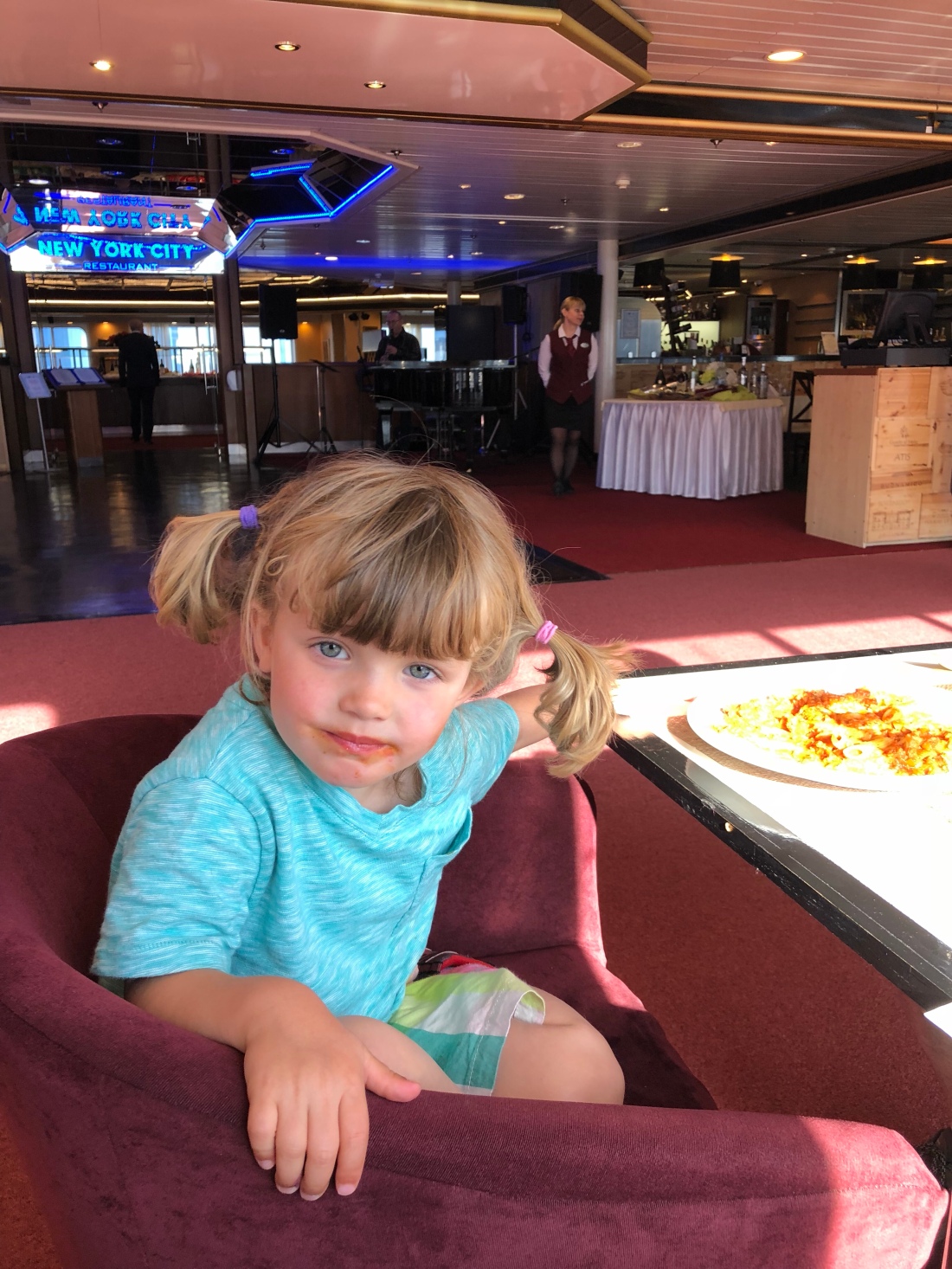 The ship has extortionate WiFi prices, and it only works in a few places in a couple of the decks, so we will be offline for a couple of days now.

As Cornelia sleeps in the bunk above me, Ian has gone to find a bar and a football match, and I’ve just heard that all the taps and loos are broken at the moment, so we have no water available. So, this could be an interesting experience!!!