We had a thoroughly lazy day again today, not getting up until about 08:45. We had a leisurely breakfast: scrambled eggs for me; Rice Krispies and a chocolate croissant for Bugsy; muesli and fruit for Ian, accompanied by a big fry up!

We had been intending to go onto the mainland today, and head up to SunWorld, the nearby theme park. We have seen the enormous gondolas and Ferris wheel every day from the balcony, and have been meaning to go. But it was so very cold today – the coldest we have experienced for a long time – and very windy, that none of us fancied the boat ride on such choppy waters, nor the experience of theme park rides in the high winds.

Cornelia was thrilled that this meant a morning at kids’ club again, and she happily dashed on in, waving goodbye and dismissing us without a second thought! Ian and I sat in the lobby with the laptop and booked me and Cornelia onto a cookery class that our driver from the other day had recommended – we are going to do the “Countryside” menu and have a private class for just me and Bugsy in the morning at 09:00. I can’t wait! Another Mummy / daughter date doing something really original and useful. 😬😬

We also did a bit of research into cycling to Angkor Wat when we are in Cambodia later this week, and have booked onto a sunrise tour that starts with pick up at 04:15. Gulp… but it’s a once-in-a-lifetime trip and we want to make the most of it, so have agreed that we can cope with Cornelia being tired for one day! Famous last words, no doubt… we have rented a child seat for her, so she can sleep on the back of Ian’s bike if she needs to. That looks terrific too – 35kms around the temples. Wonderful. 🤗

We collected Cornelia around 13:30 with the intention of going for lunch, but actually neither Ian nor I were hungry, so we ordered room service for Cornelia – fishfingers and chips – which she ate in her Paw Patrol camping chair that has been in my suitcase since Africa, whilst watching TV. We asked her if she’d rather go back to kids’ club in the afternoon or for a swim, and she said she’d prefer to go for a swim. So the three of us piled up to the third floor, and had the whole pool to ourselves! It was the first time I’ve been in the pool since we’ve been here, and we had a brilliant time. She must just use up so much energy. She was on the go for the whole hour we were in the water, clambering in and out of the inflatable ring, and then “surfing” on my back while I swam underwater. 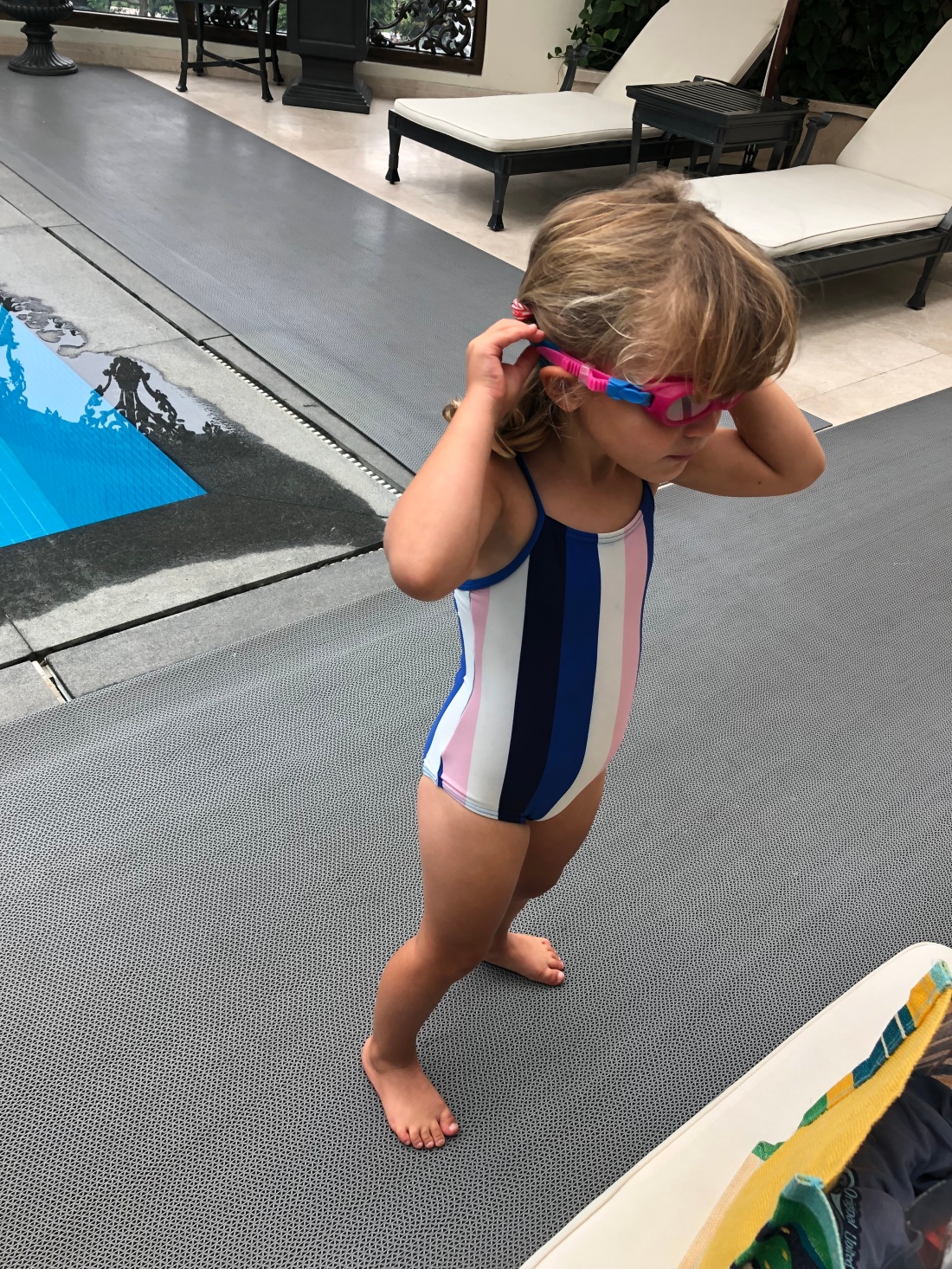 Ian and I were still hoping to go to the gym, and as she was thrilled with the idea of kids’ club yet again, we dropped her off again and went to the gym. This time, we were joined by four very noisy men in their early twenties who could not talk at normal indoor voice level and just yelled at each other. 🙄 I was lucky enough to have brought my headphones, so plugged into an episode of Suits, turned up the volume and did my run, but poor Ian was stuck listening to them, and worse still, they were right behind his bike, just standing there chatting loudly to each other! Haha, we are so used to having the hotel to ourselves, that suddenly having company feels a bit strange!

When we went to collect Cornelia, we saw a hundred or so new guests arriving, and the hotel lobby was alive and buzzing for a change! We had decided to eat out this evening, and Avocado had the best reviews on Trip Advisor, so once we’d showered/bathed we headed across on the boat to the main lobby, from where we hoped into a taxi that had fortuitously just arrived. The restaurant is a bit hidden away behind the main road, but thanks to good old Google Maps, I managed to get our driver to drop us off nearby and we walked the last 200 or so metres to Avocado. 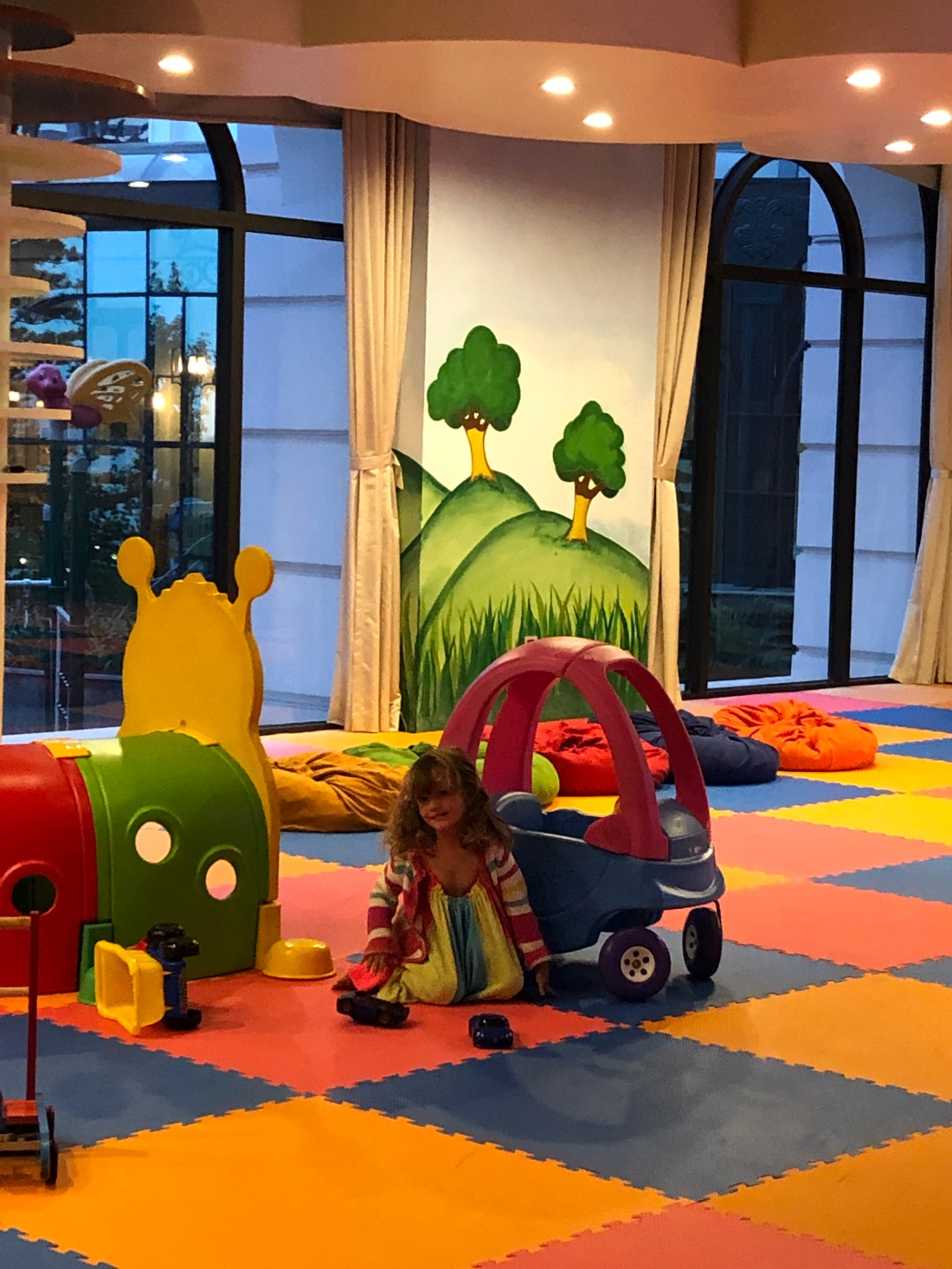 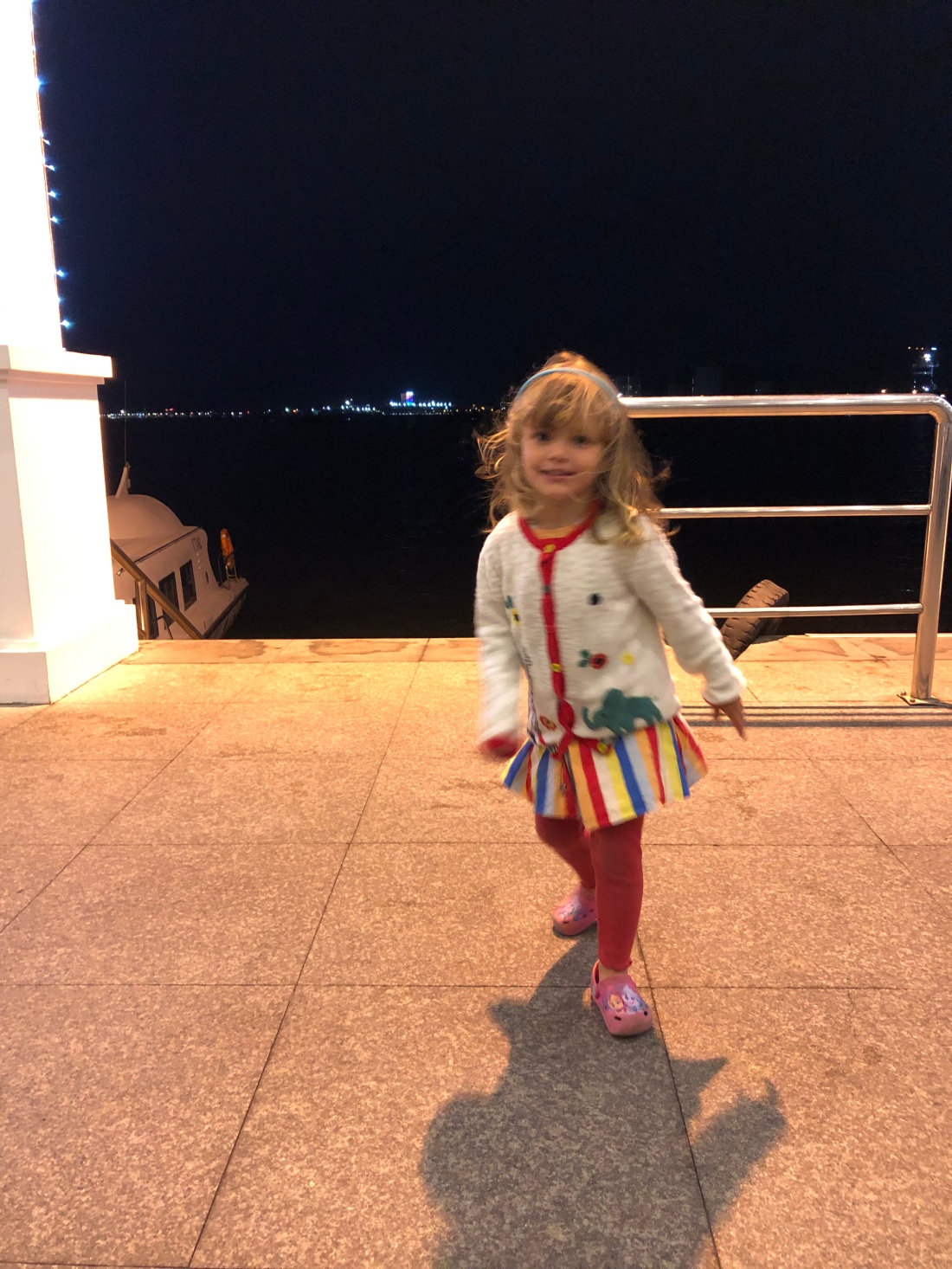 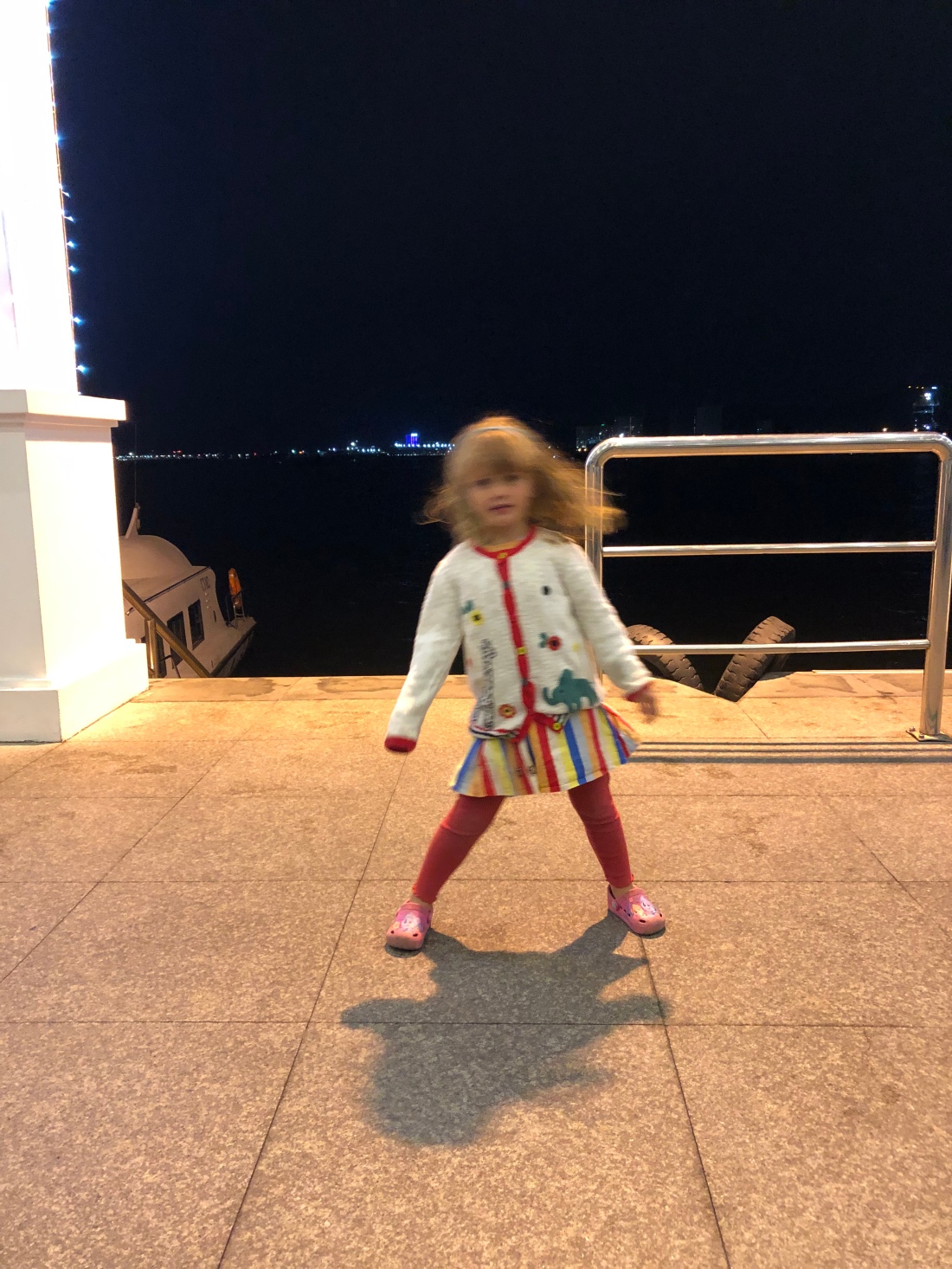 It was a lovely restaurant and Wendy, our hostess, spoke near-perfect English. She gave us both the Vietnamese and European menus. Ian and I both chose from the Vietnamese menu: I had “beef in coconut” and Ian had the marinated duck with purple sweet potato. Thankfully, they had good old reliable spaghetti in tomato sauce for Cornelia. I still haven’t managed to persuade her to eat rice or noodles! 🙄 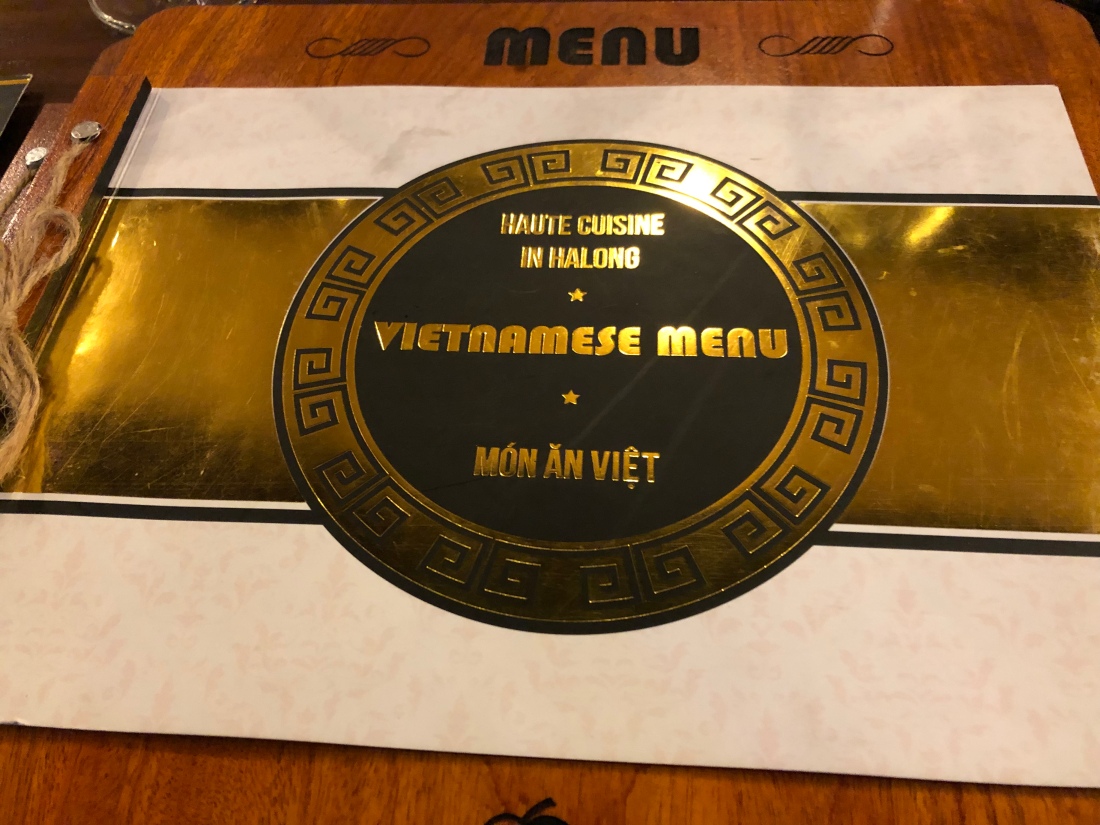 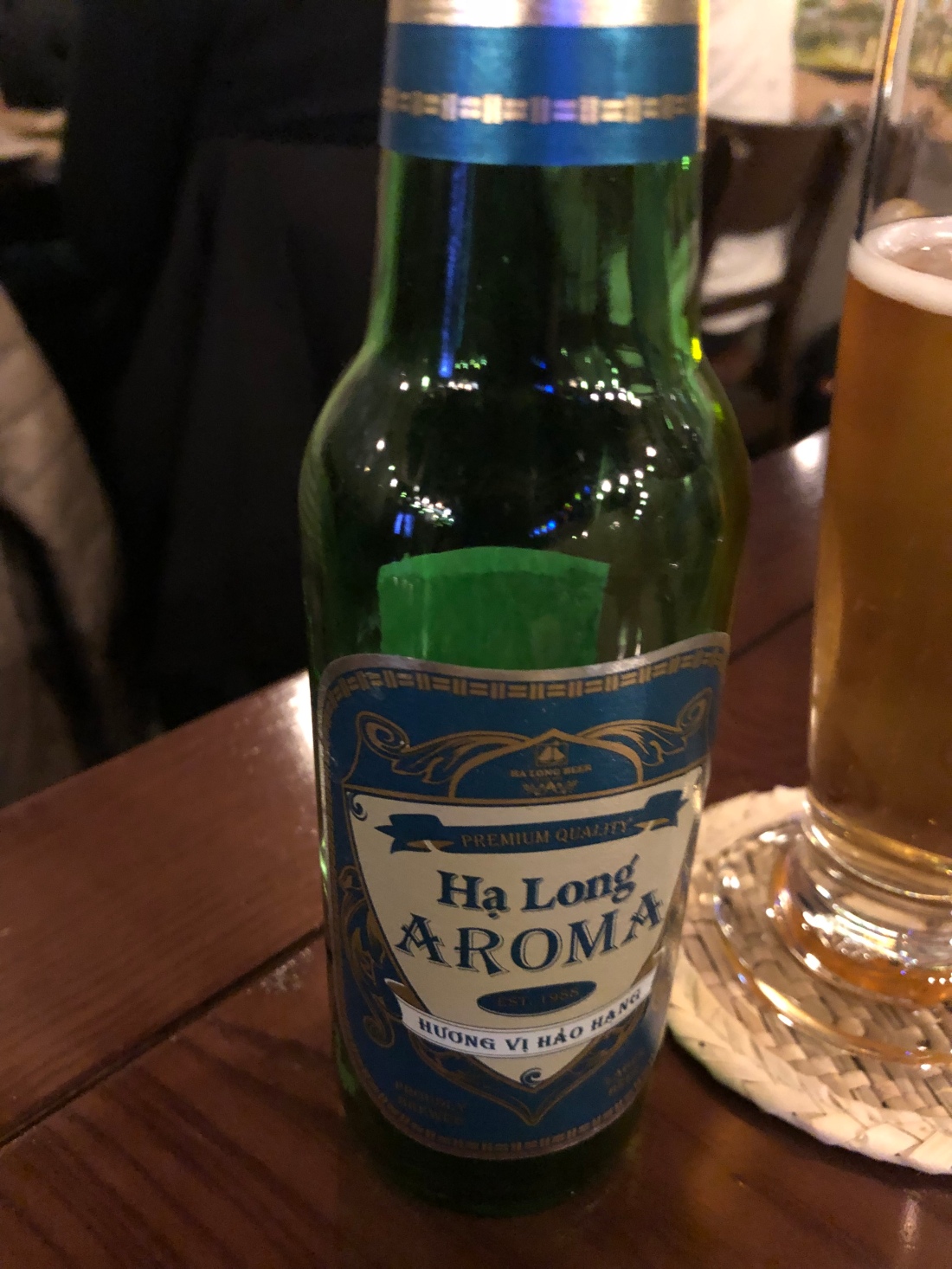 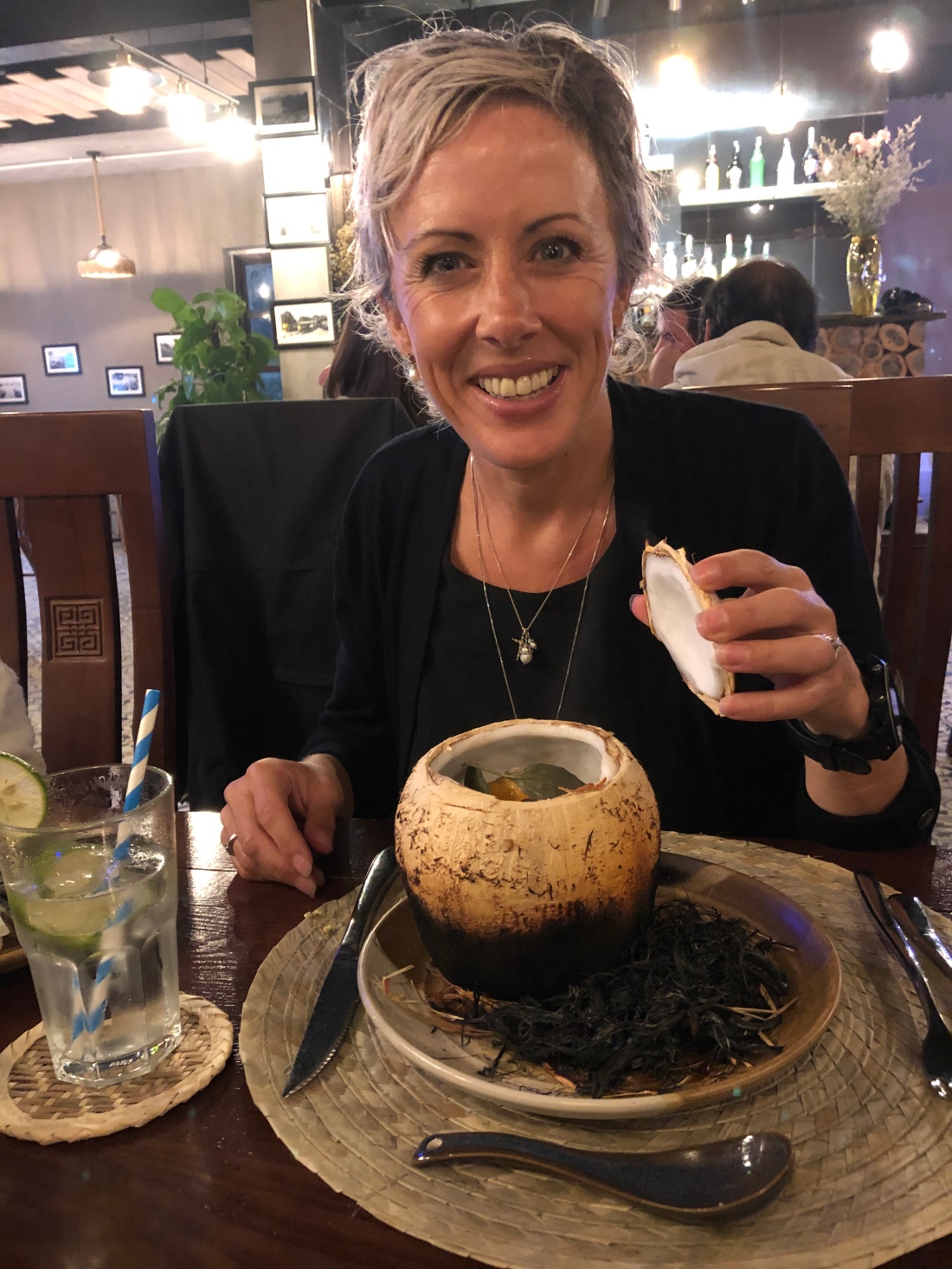 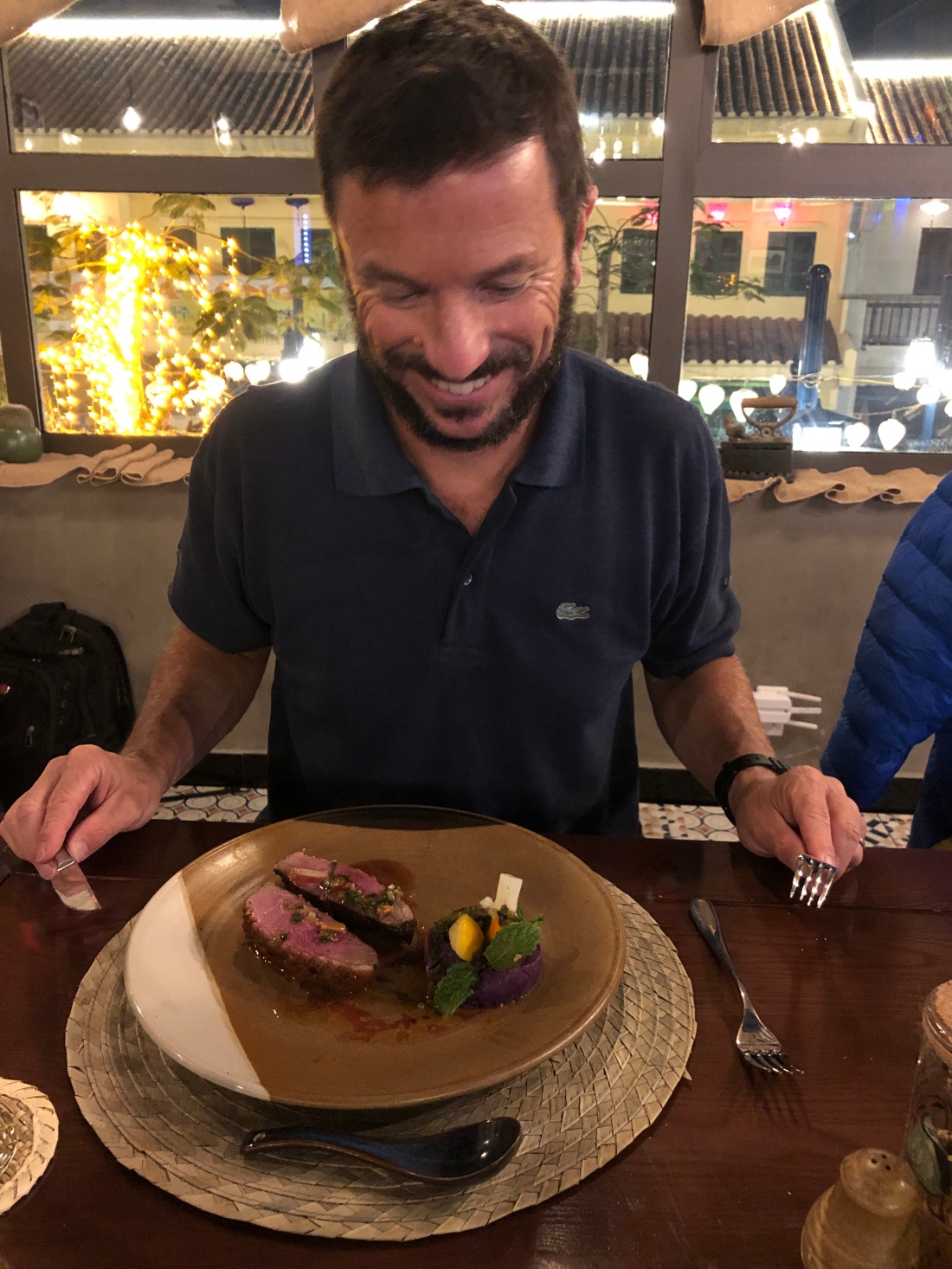 I have to say, my beef was one of the nicest meals I’ve eaten since we’ve been travelling. It was quite a simple stir fry served in a coconut shell, but the beef was tender and not at all chewy, the stir fry was crunchy and the sauce was subtly flavoured by the warmed coconut. With high hopes for dessert, I ordered avocado chocolate mousse and Ian the coconut soufflé. Sadly, they were both a bit disappointing. The texture of my chocolate mousse was a bit too unusual for me and the avocado tasted watery instead of creamy, and that diluted the chocolate taste. Ian’s soufflé tasted yummy with the ice cream, but had failed to rise, so was more gooey than fluffy! We had ordered a second round of drinks but they’d forgotten about them. This meant that we had nothing to drink while we waited for our dessert to arrive, and then had to neck them once we’d finally managed to catch Wendy’s eye. It was quite a busy evening for them and I think they were just too rushed to remember everything. But they remained cheerful and friendly throughout, which left us overall with a positive memory. 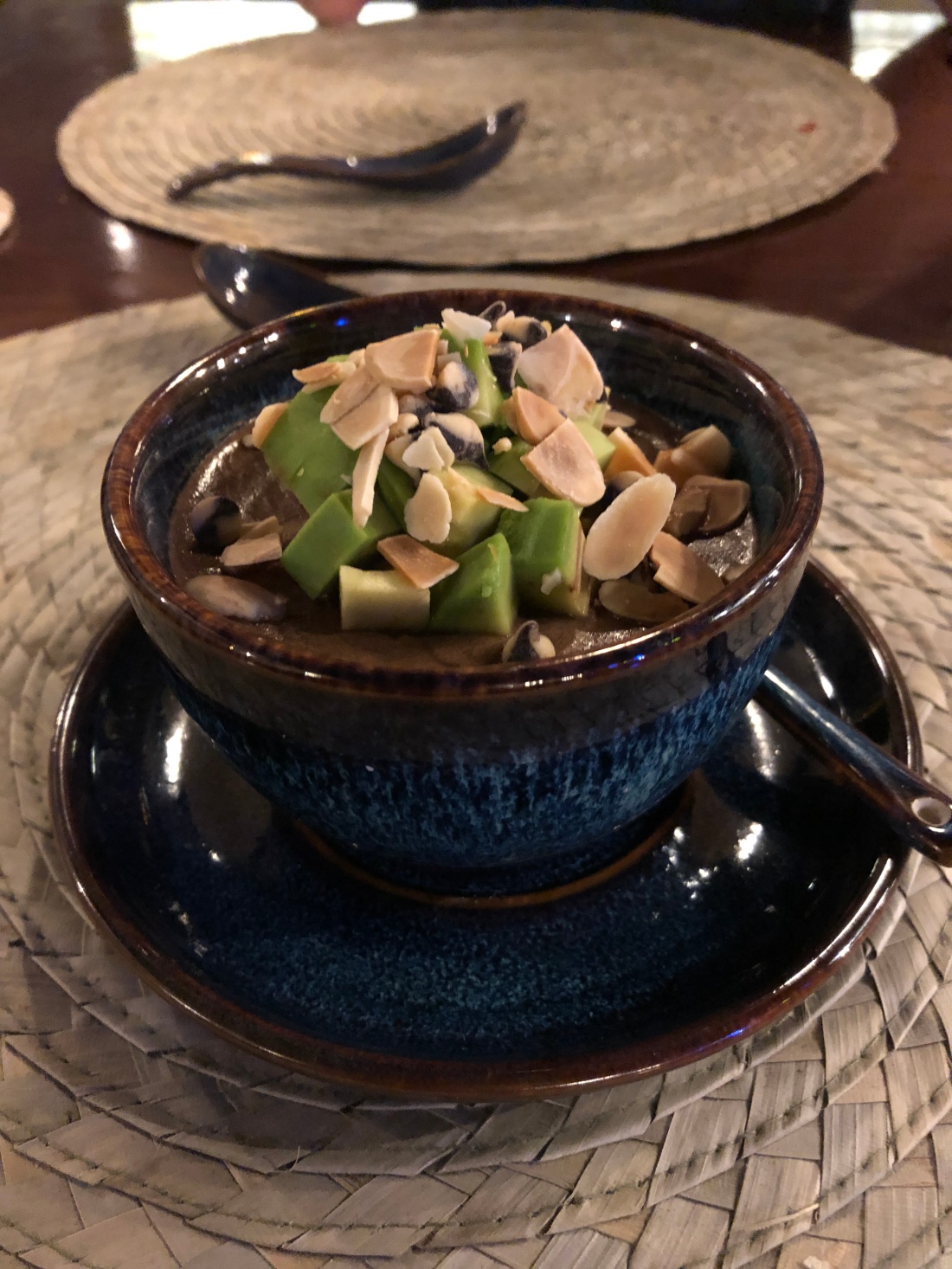 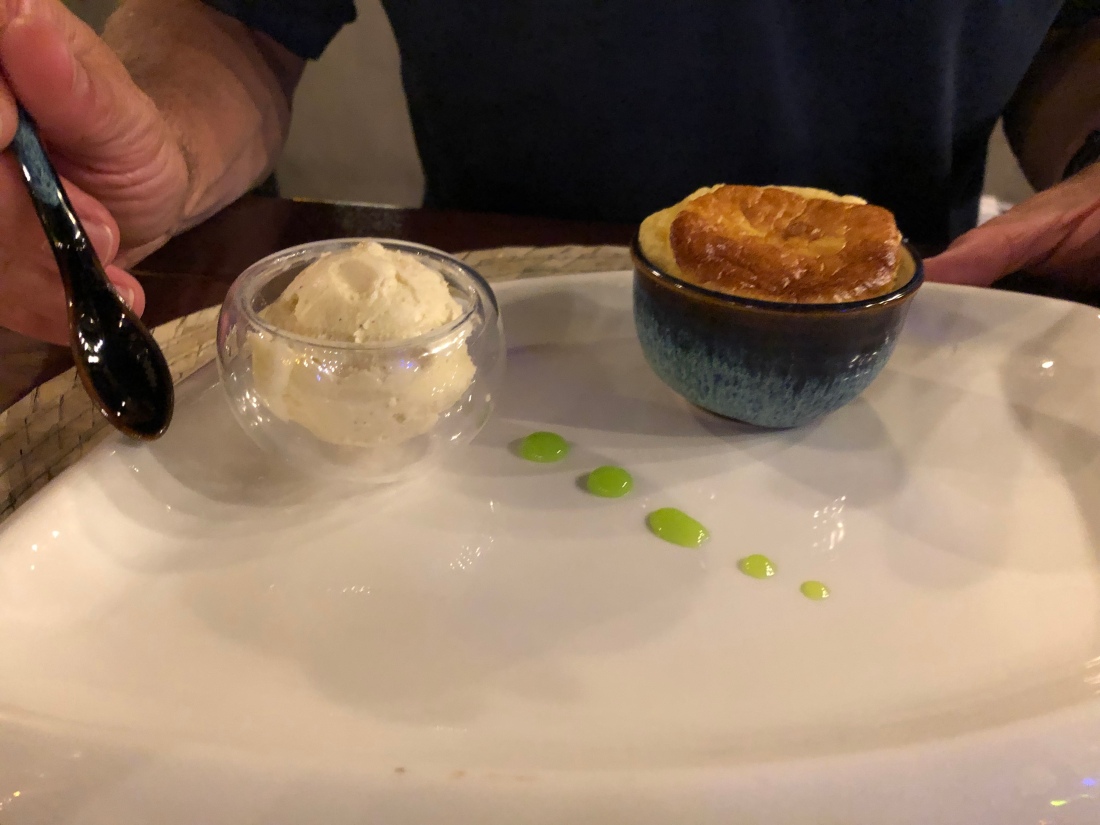 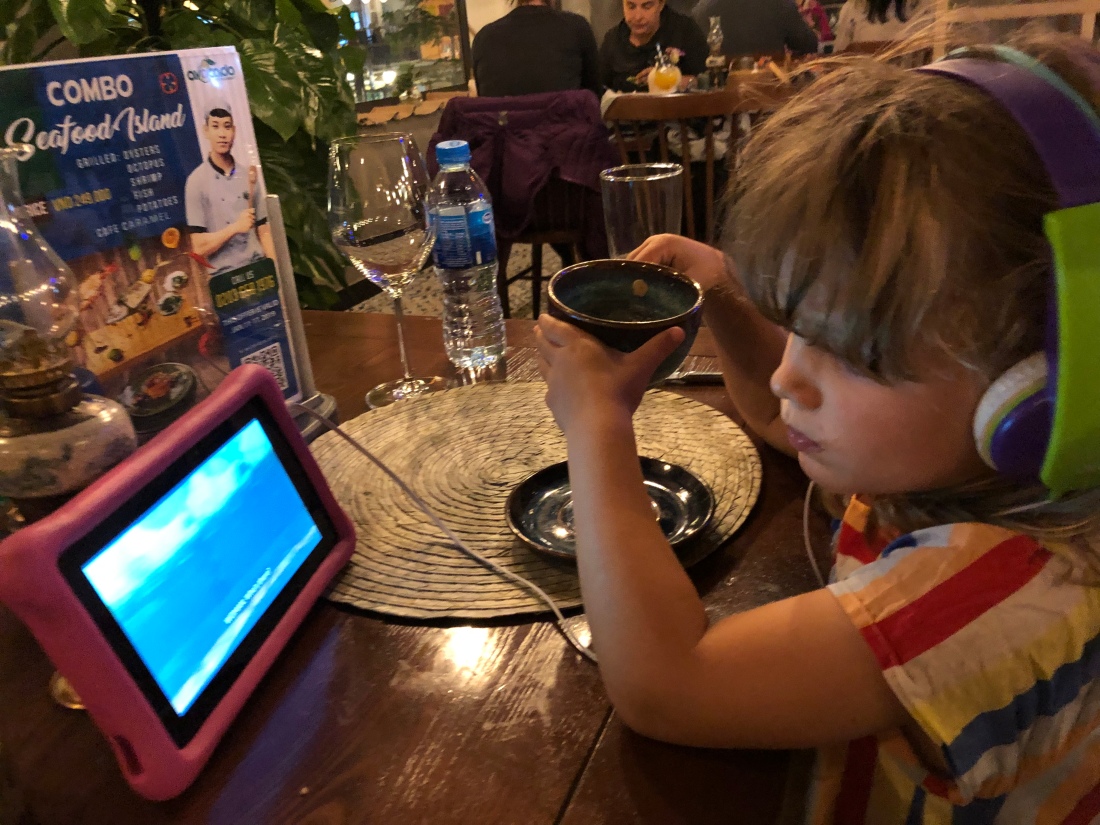 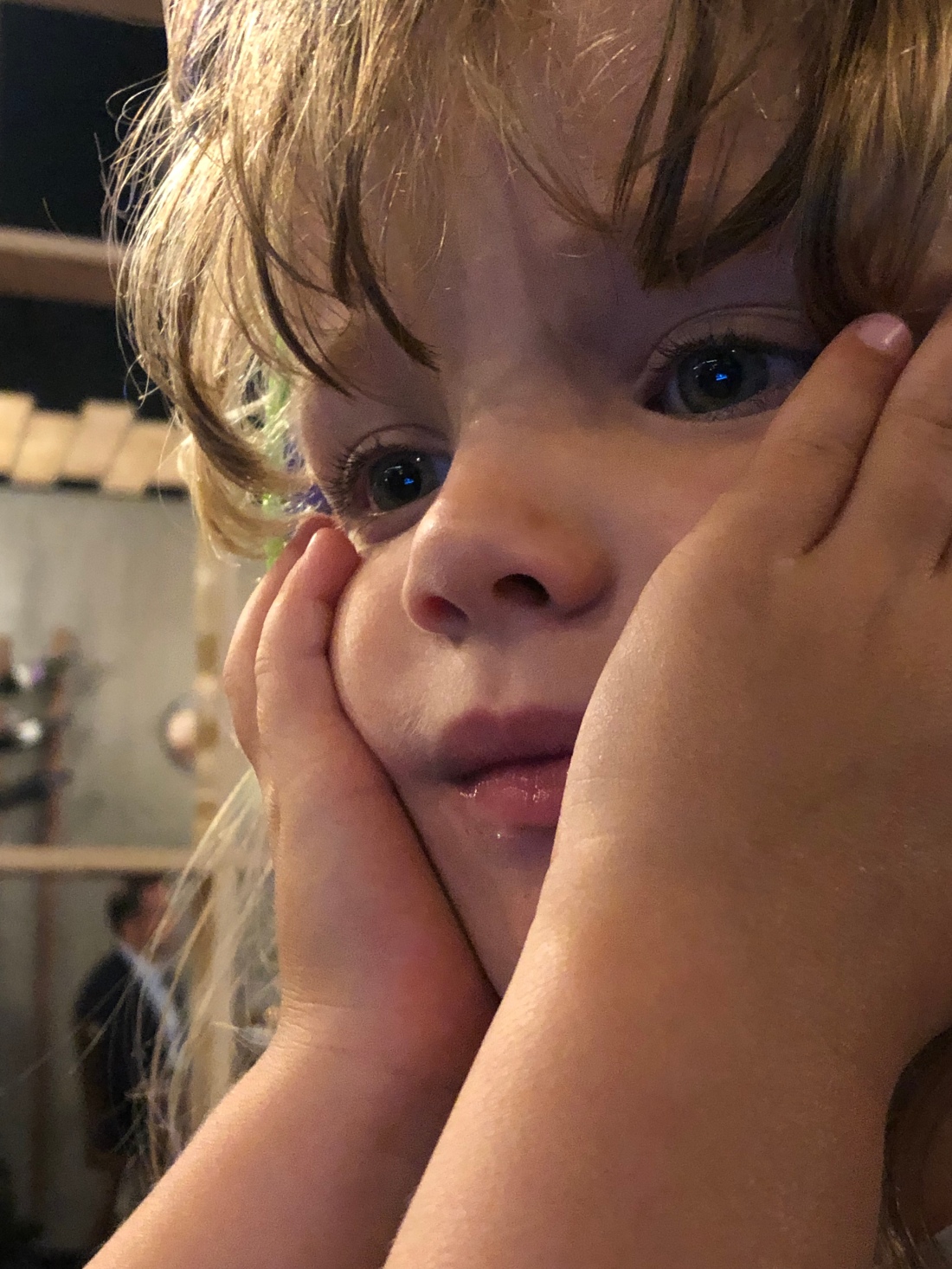 The restaurant called a taxi for us and we were soon back in our room. Cornelia was exhausted, but in good spirits and went to bed quite happily. She had given me a code to wake her up in the morning: three knocks on her body, a flick with my fingers, then the words “cookery school, cookery school”, and I promised to rouse her with this magic spell! 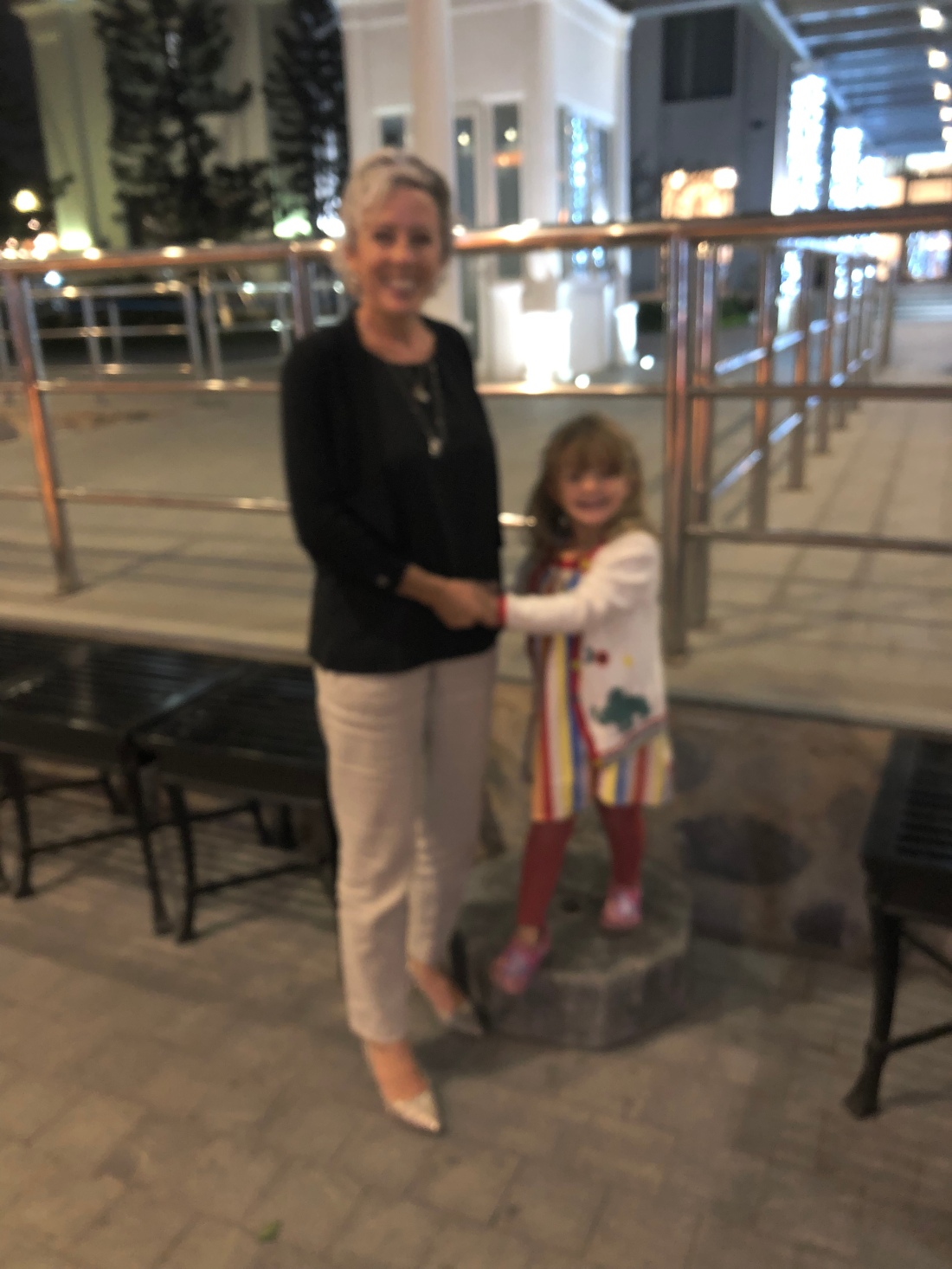