Breakfast was in the main building and was a bit of a challenge to find on our first day.  There is no map provided in the room, so we walked around the outside of the hotel until we found the main entrance, then came in that way.  We discovered later that there is a quicker way, but for now, we did at least make it in time!  The hotel is extraordinary: situated on its own island, and it is currently very quiet indeed.  It is winter here, as you can tell from the cloudy skies, so things like the massive outdoor pool are completely empty. 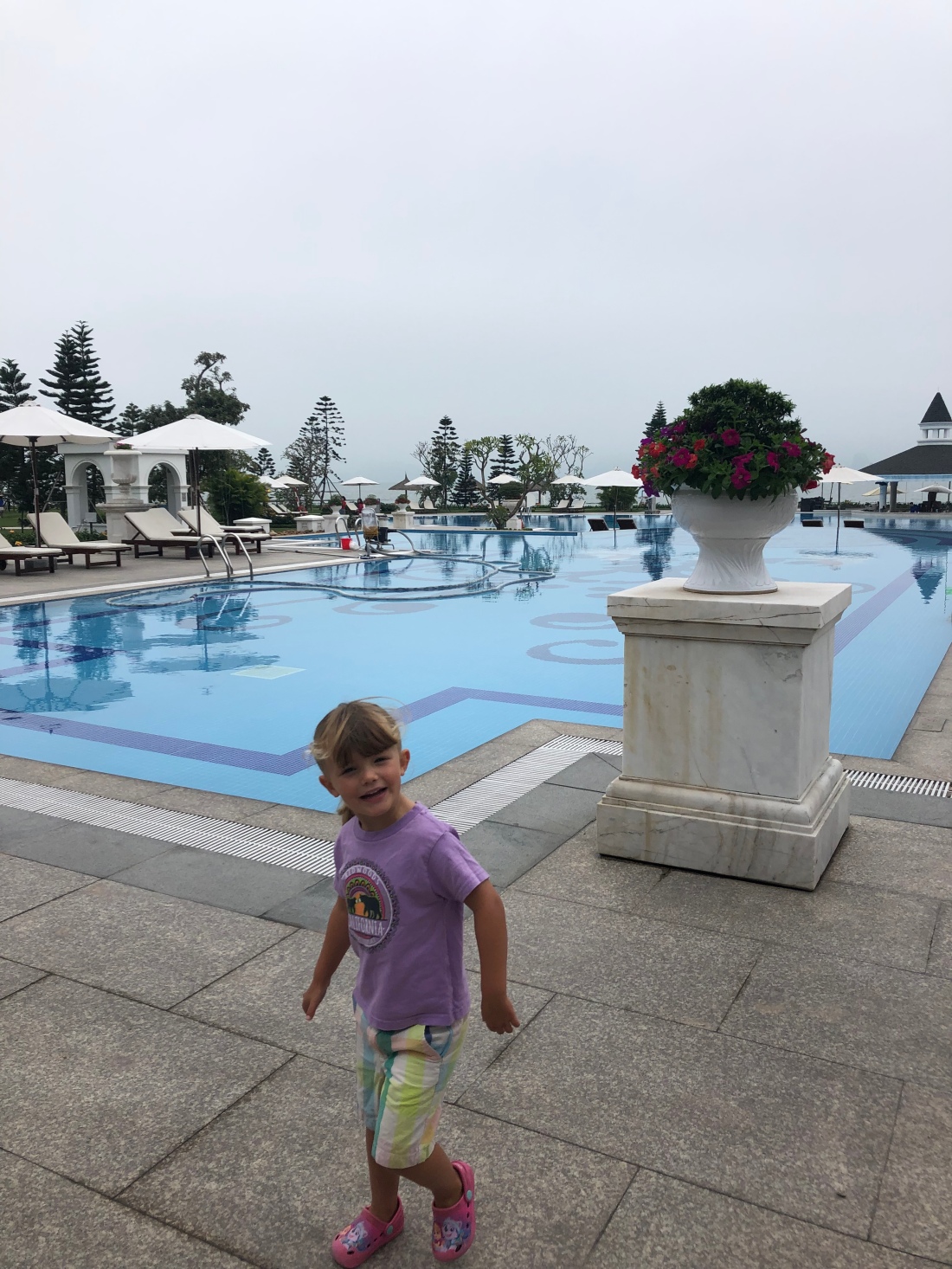 We had a nice breakfast – I love the culture difference where you might have miso soup and duck egg rice for breakfast! Ian had smoked eel. 🙄 Cornelia had her fruit (which I insisted on first, before she eats anything else, so I know she’s had at least two healthy portions during the day!) then a chocolate croissant. I’m determined to lose a couple of kilos by the time we return, so am currently managing to avoid all the pastries and other calorie-laden temptations!

After breakfast, we ambled back to the room, having a quick explore of the hotel itself first. It is immaculate, and there were plenty of staff around working hard to keep it looking pristine, even with the low number of guests. 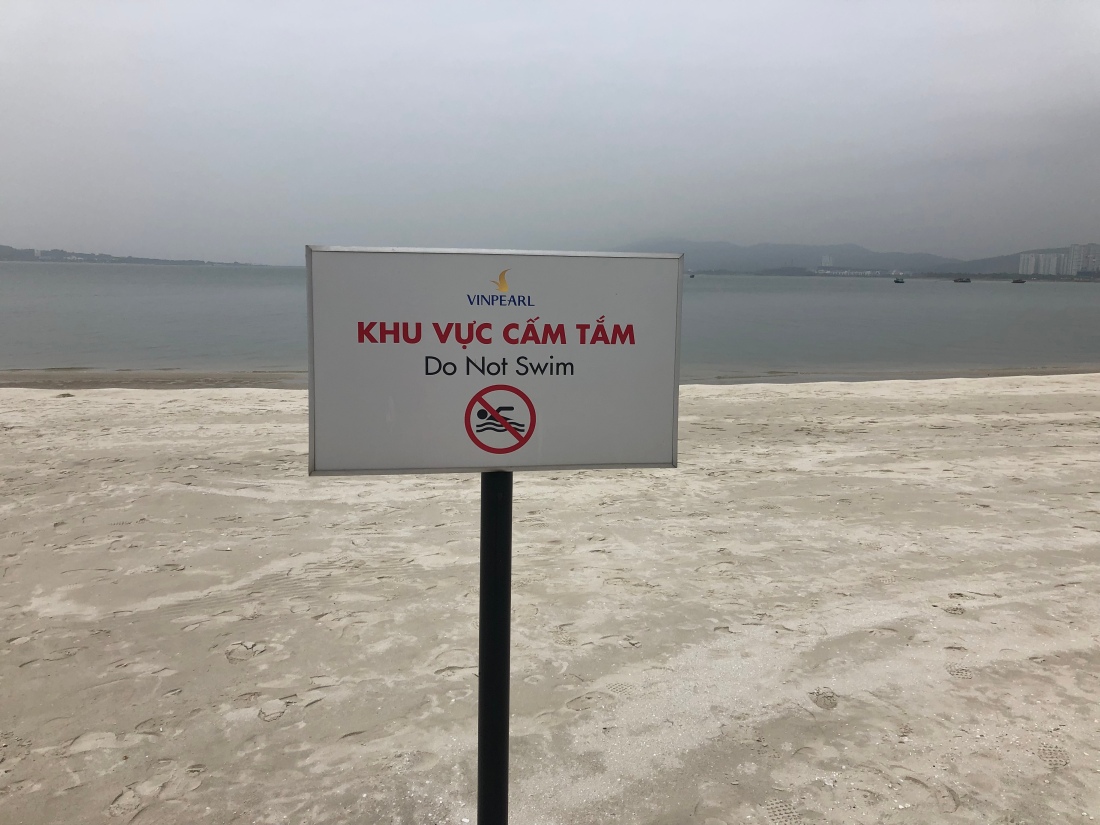 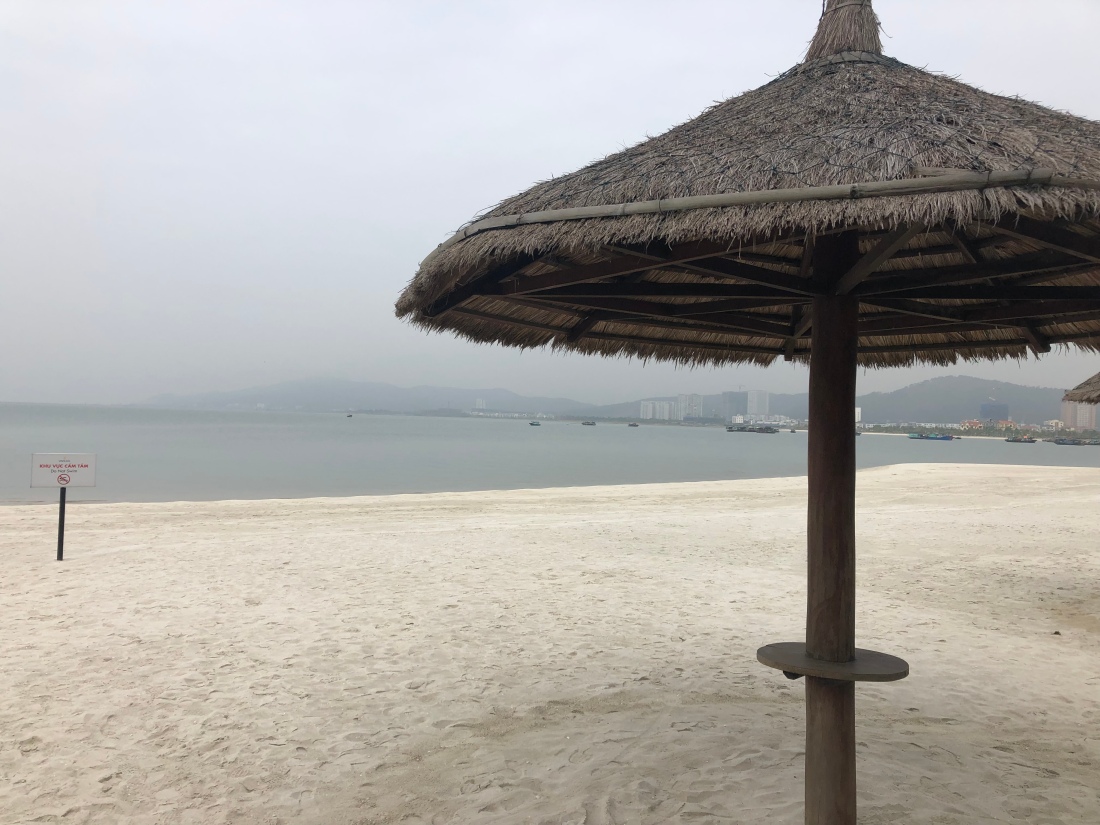 Cornelia was keen to try out the kids’ club, and in keeping with the obvious quiet season at the hotel, was the only child there. But she didn’t mind at all, and when we collected her for lunch, she asked if she could come back again this afternoon!  While she was at the club, Ian and I finally managed to book the rest of our travels before we come home in just a couple of weeks. We sat in the lobby with my laptop, and called Expedia to cancel our return flight from Hanoi to Singapore, as we are now going to fly from Hanoi to Siem Reap in Cambodia.  It feels great to have finally booked something, but it does now mean that our trip really feels it is coming to an end!

We collected Cornelia from kids’ club to have lunch by pool . It was still completely empty outside!  And there is a really wonderful pool which looks to be about 50 metres in length. It isn’t heated but I suspect I may brave it and have a good session in there at some point this week!  We are slightly disappointed with the weather.  It is cloudy, dull and slightly chillier than we had anticipated, so our aim of having the last couple of weeks sitting on a beach relaxing seems slightly unachievable!  Nonetheless, as we thought we might find just doing nothing for two weeks slightly unnerving, the weather hasn’t put a dampener on things, so to speak.

I wasn’t particularly hungry, so while Ian had the Club sandwich, and Cornelia had the chicken burger lunch, I got to eat her leftovers. Which was quite a lot, as it happened!  But the lunch took a long time to arrive, and by the time we’d finished it was about 15:15. 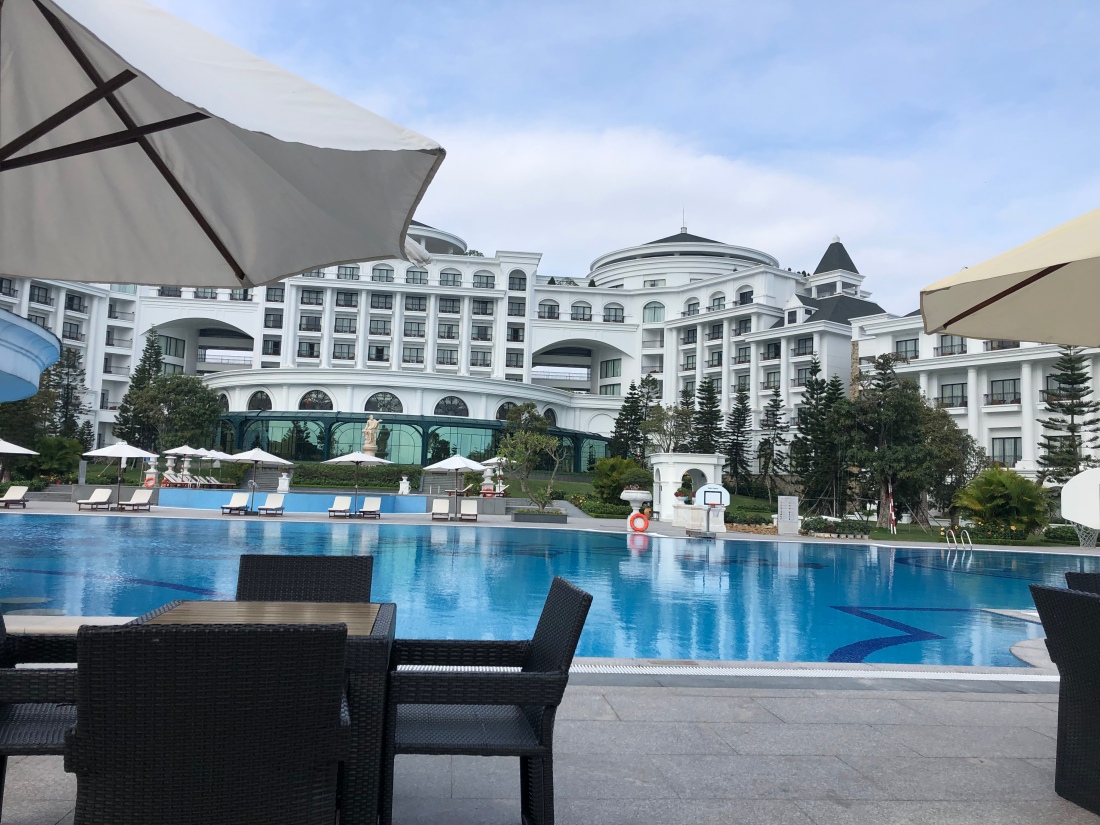 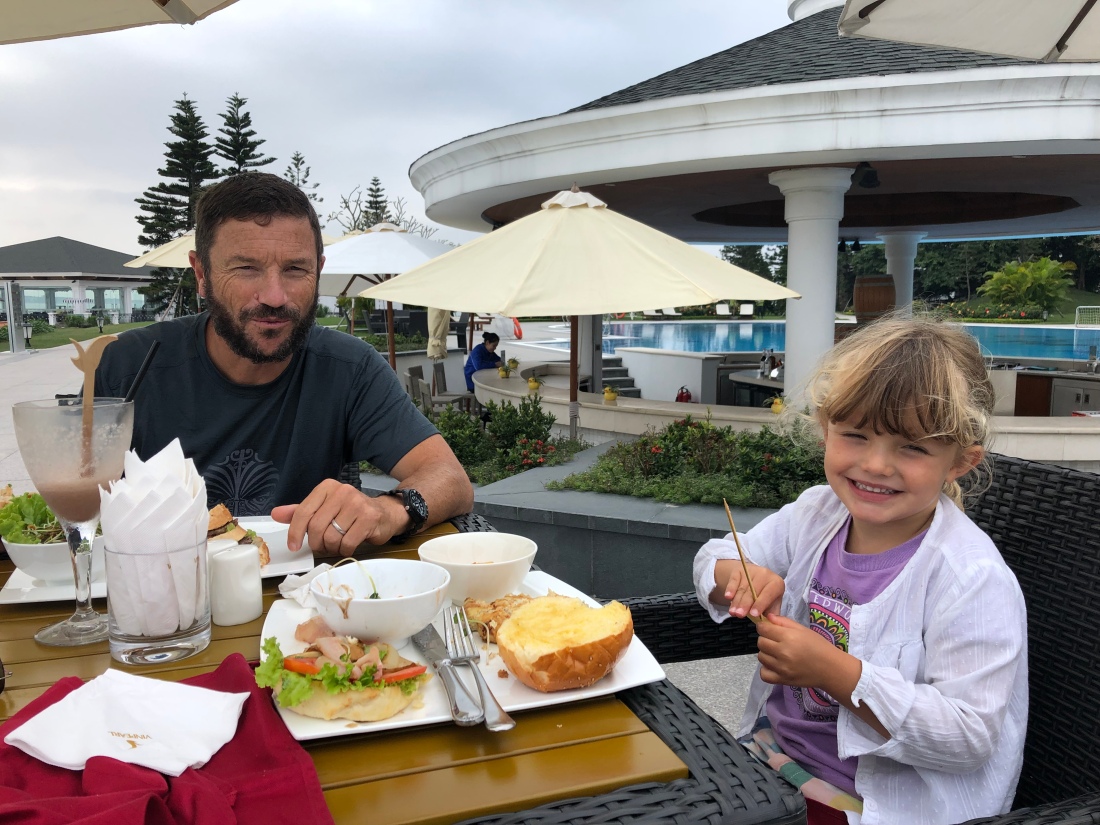 We dropped Cornelia back to kids’ club, and Ian and I went back to the room and changed for the gym. It felt very strange not having Bugsy with us, but as she asked to go again, we were happy to let her, and have some grown up time together.  And yes, we spent that time at the gym, not guzzling cocktails and slobbing on the lovely sofas!  I went on the treadmill in the gym – the downside to having an isolated hotel on a small island is that I can’t really go for a run anywhere other than on the treadmill.  The gym had no air con, so we were both really sweaty by the time we’d finished.  I realised that it was 17:00, so dashed off to collect Bugsy who’d had her hair French-plaited beautifully by the girl hosting the club this afternoon.  When I asked if she’d liked having her hair plaited, she revealed that she’d asked the girl to hurry up, please! She really has no patience when it comes to having her hair done.  (As it turns out, kids’ club is open until 21:00, so yahooooo, perhaps we will have an evening of cocktails yet!)

I took her back to our room to get her swimming stuff, and we met Ian back up by gym and pool. The men’s changing rooms were a bit too weird for Ian to feel comfortable taking Cornelia in, and I’d hung around just in case that were so.  I changed her in the ladies’ locker room and tried to do a bit of my blog while I waited for them to finish their swim.

They had a fab time! She told me, as we were walking back to our room, that she’d been a princess on a boat (inflatable ring) and there had been a terrible storm and she’d fallen off her boat. She almost drowned but then the handsome prince arrived to save her. Love it!

Ian and I had showers, while Bugsy soaked in the bath, then we managed to get hold of Charlotte for a good chat, before we went for supper.  We asked at reception about the dining options, but there were none… Only the main restaurant was open, serving the a la carte menu and a buffet. We opted for the a la carte but in hindsight, we should’ve done the buffet as it took so long to arrive, and it was already quite late in the evening.  Ian ordered a Tiger draught and I decided to treat myself to a Cosmopolitan, but both were unavailable.  Argh, that was annoying!  But never mind, we both settled for a can of Tiger instead.

The food was worth the wait. I had sea bass with lime butter, pesto linguine and vegetables. Ian had Asian sea bass with soy and ginger. Bugsy was happy to have pasta bolognese.  It was all absolutely terrific and we scoffed the lot quite happily.  The sea bass was unlike any other I’ve had before – really thick and meaty, and the size of large salmon fillet.  Yum, yum, yum.

By the end of the meal, Cornelia was getting very tired. As we were leaving, Ian made the mistake of showing her the chocolate fountain. When will he learn not to show her stuff she isn’t going to get??!!! As we passed by, the waitress could see Cornelia’s interest and offered her a try of it. She had a piece of pineapple on a stick and smothered it in the melted chocolate, before licking the sauce off the fruit and declaring she didn’t want the pineapple! I shoved it in Ian’s mouth, thanked the waitress and off we went to our room.

By now, Cornelia’s fatigue was beginning to take control! She was whining and being generally disagreeable, and wasting a lot of time. So although we managed to avoid a scene, she only had one story (that she insisted was read by me) before falling asleep.

As I updated the blog again, Ian fell asleep on his bed at about 21:45 and just now (22:10) Cornelia actually climbed out of her bed and onto mine – all whilst seemingly fast asleep! The cheek of it!!