I couldn’t resist curling up in bed with Bugsy this morning as she slept on, while Daddy showered. She woke up and asked me if I’d stayed in her bed all night? She thought it was still nighttime because it was dark, and was very surprised when I revealed that it was daylight behind the curtains! Well, sort of – it was a very dull sky that greeted us and we realised how lucky we’d been yesterday to have no rain at all. Cuddles over, I hopped in the shower – it worked properly today by some miracle – and once I was dressed we headed down for breakfast, mini jar of Nutella in hand.

Cornelia had a good breakfast of pineapple and watermelon, a small bowl of honey stars and two little pancakes, with Nutella, of course, and she ate it all very quickly so we could get back up to our room and pack, in readiness for the shuttle bus that would take us to the airport. She had twenty minutes of TV while we waited for our luggage to be collected, then we checked out and hopped on our transfer bus. Someone on the bus hadn’t booked their seat but wasn’t owning up, as one British guy was left without a seat. I said that he could have mine, and Cornelia would sit on my lap, and then we had a very interesting chat. He had missed his connecting flight in Singapore while travelling from Melbourne to Cambodia yesterday, so his insurance had covered him for a night at the hotel and food, so despite the inconvenience, he was happy enough with how things had turned out. 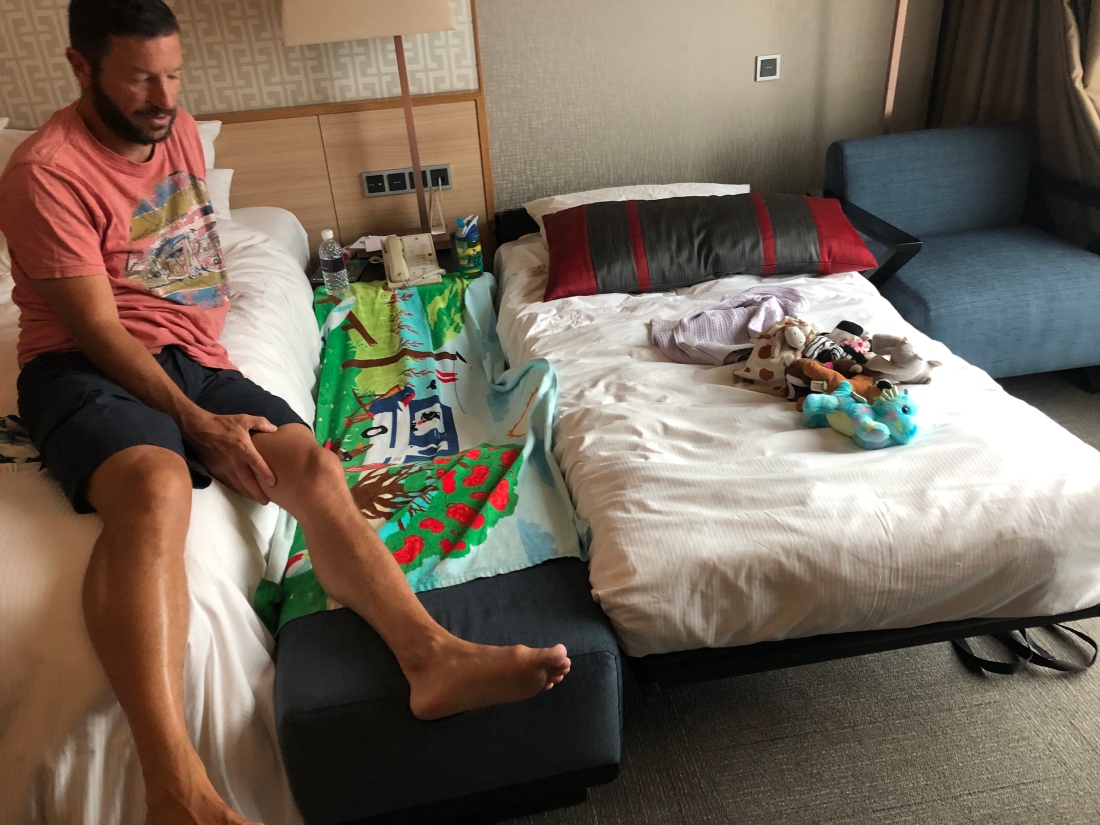 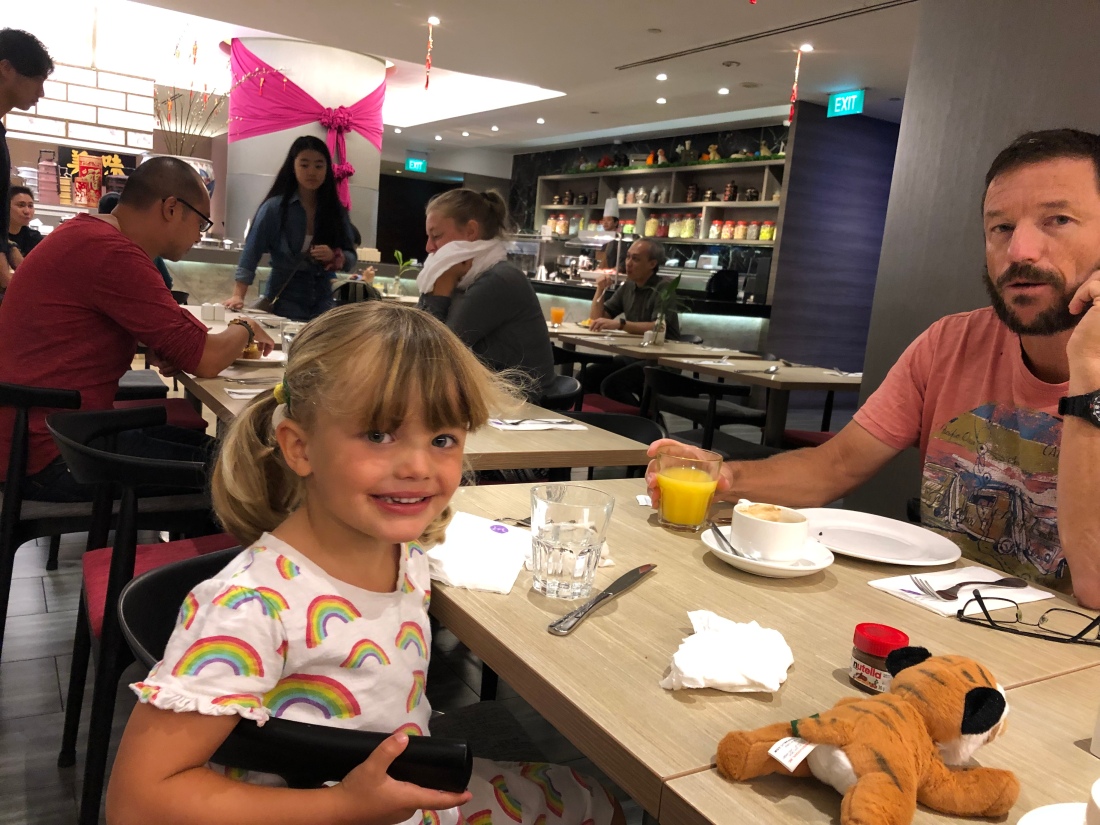 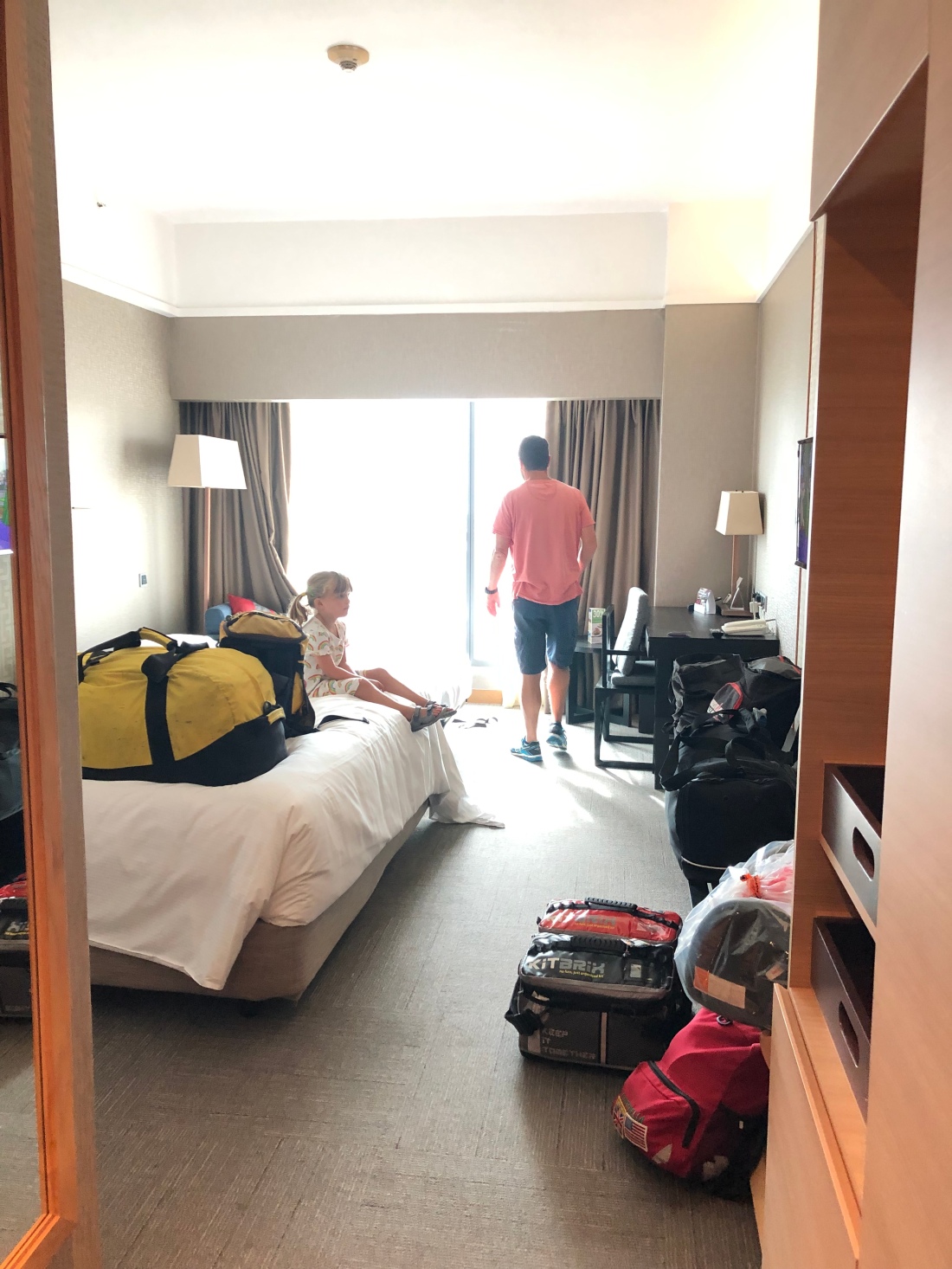 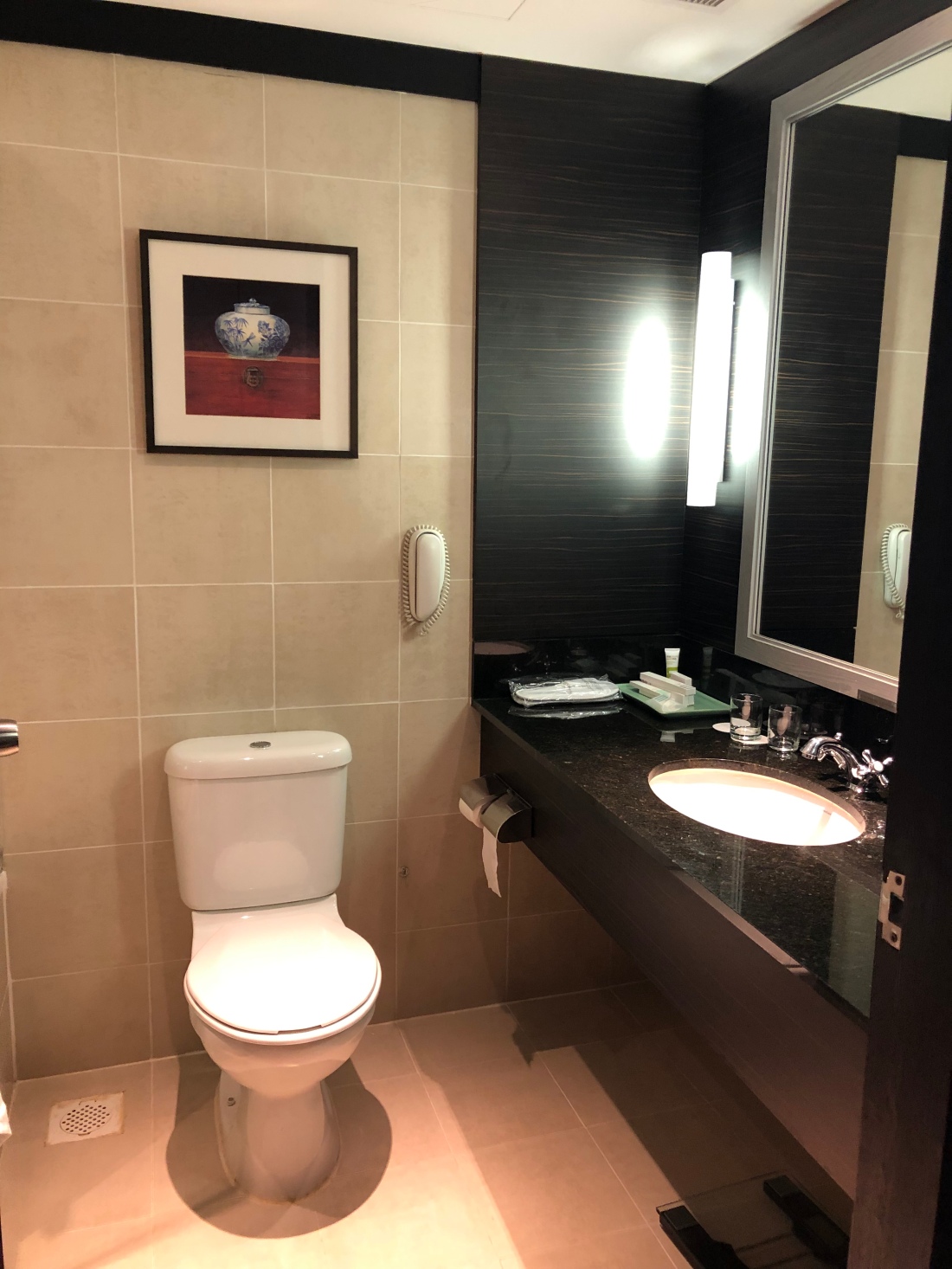 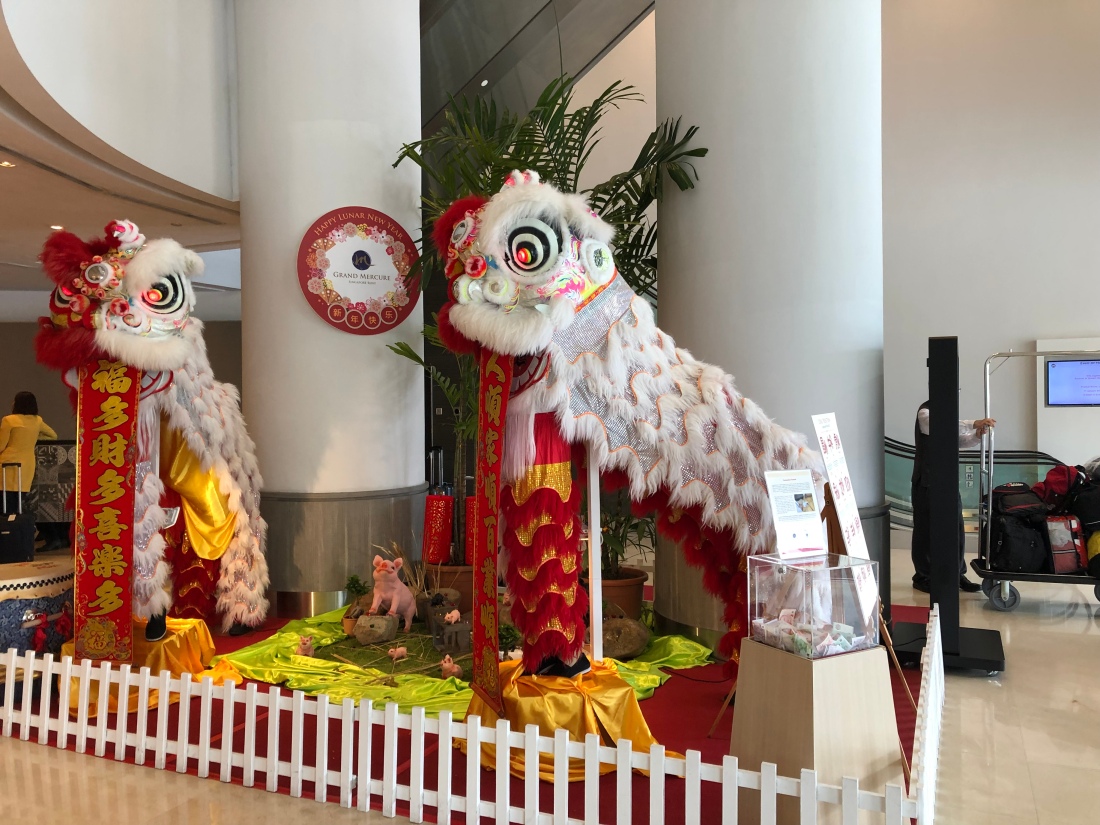 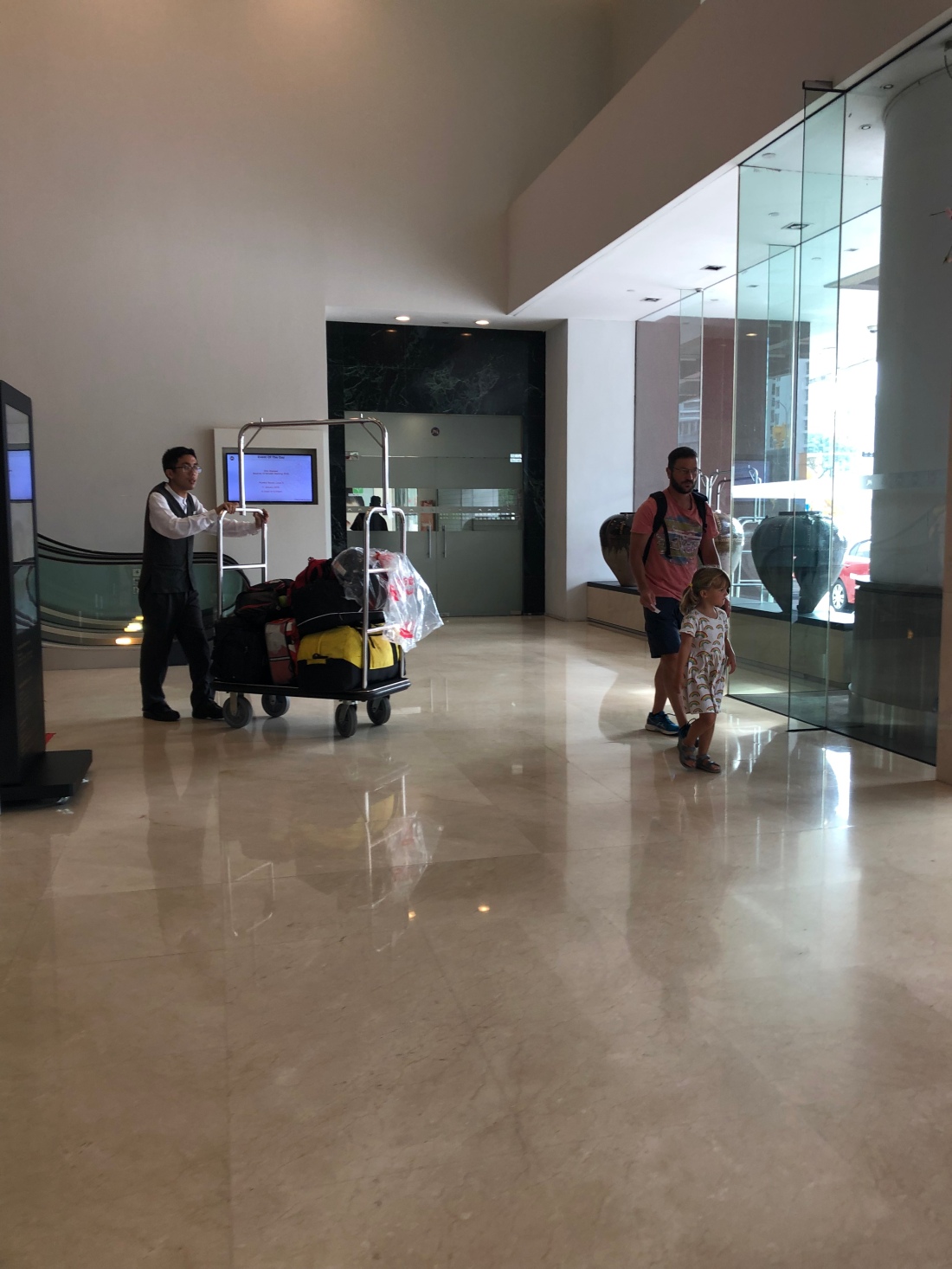 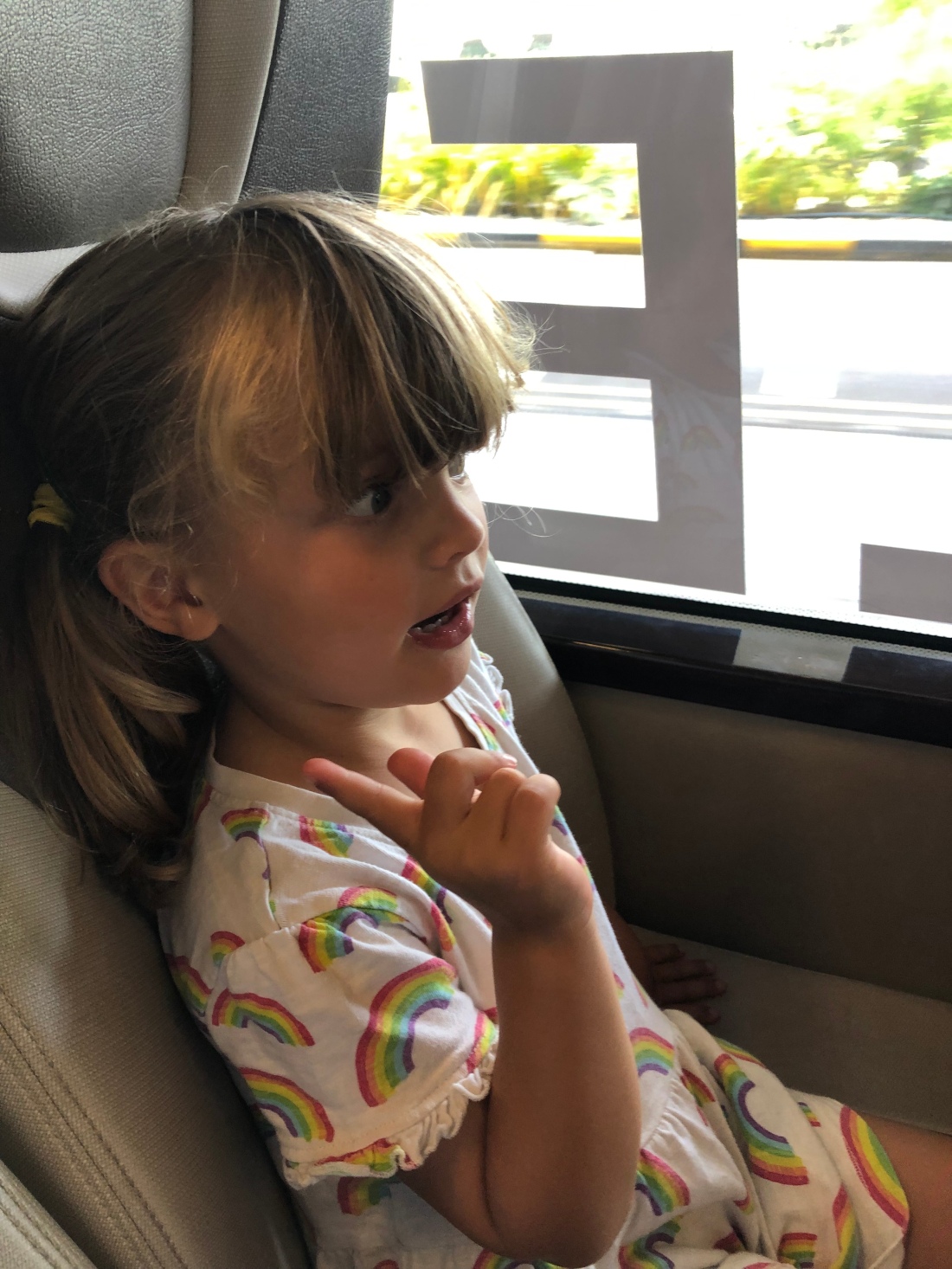 When we arrived at the airport, we were dropped off at Terminal 2, then had to load our luggage onto a trolley and cart it down a floor and around the building to catch the shuttle bus between T2 and T4. T4 looks brand new and displayed a big shiny poster gloating that THIS airport had more than just escalators and travelators for children, together with a photo of a fantastic playground. Cornelia was very excited, so you can only imagine her face when we read the small print… the play areas are available in Terminals 1, 2 and 3. Not 4. 🙄 Luckily, the range of unusual seating kept her occupied as she flew herself around the world on different dragons…! 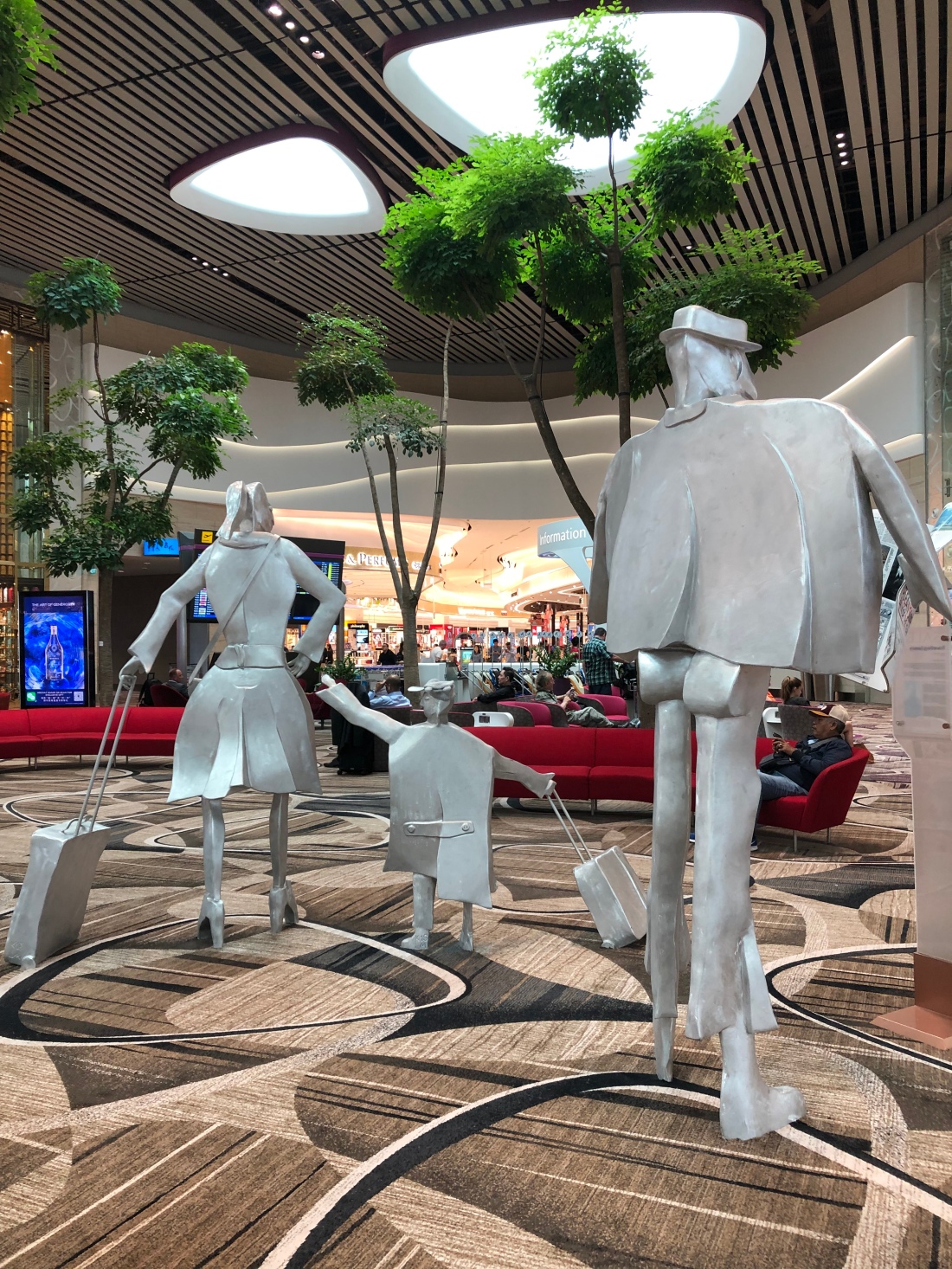 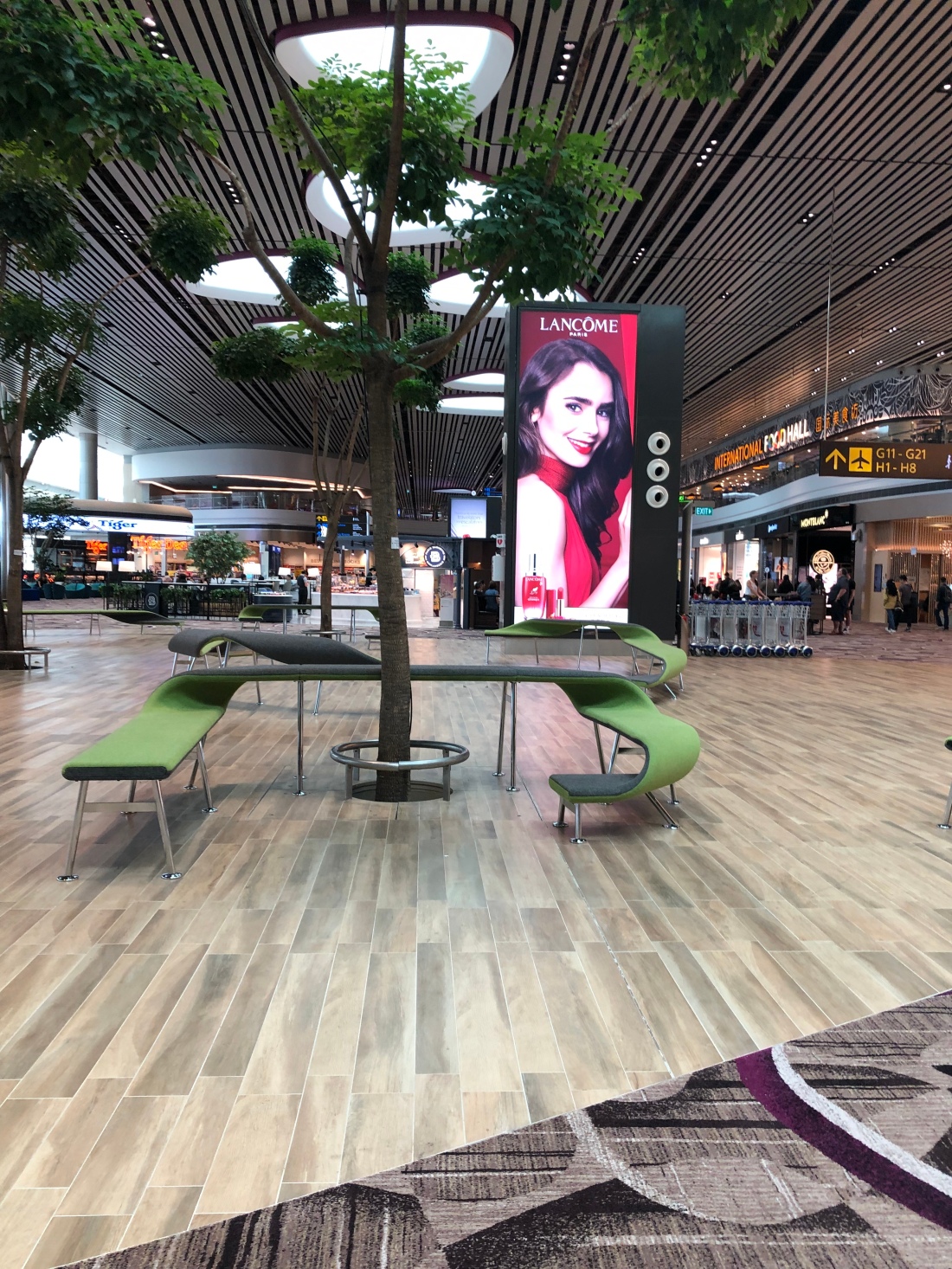 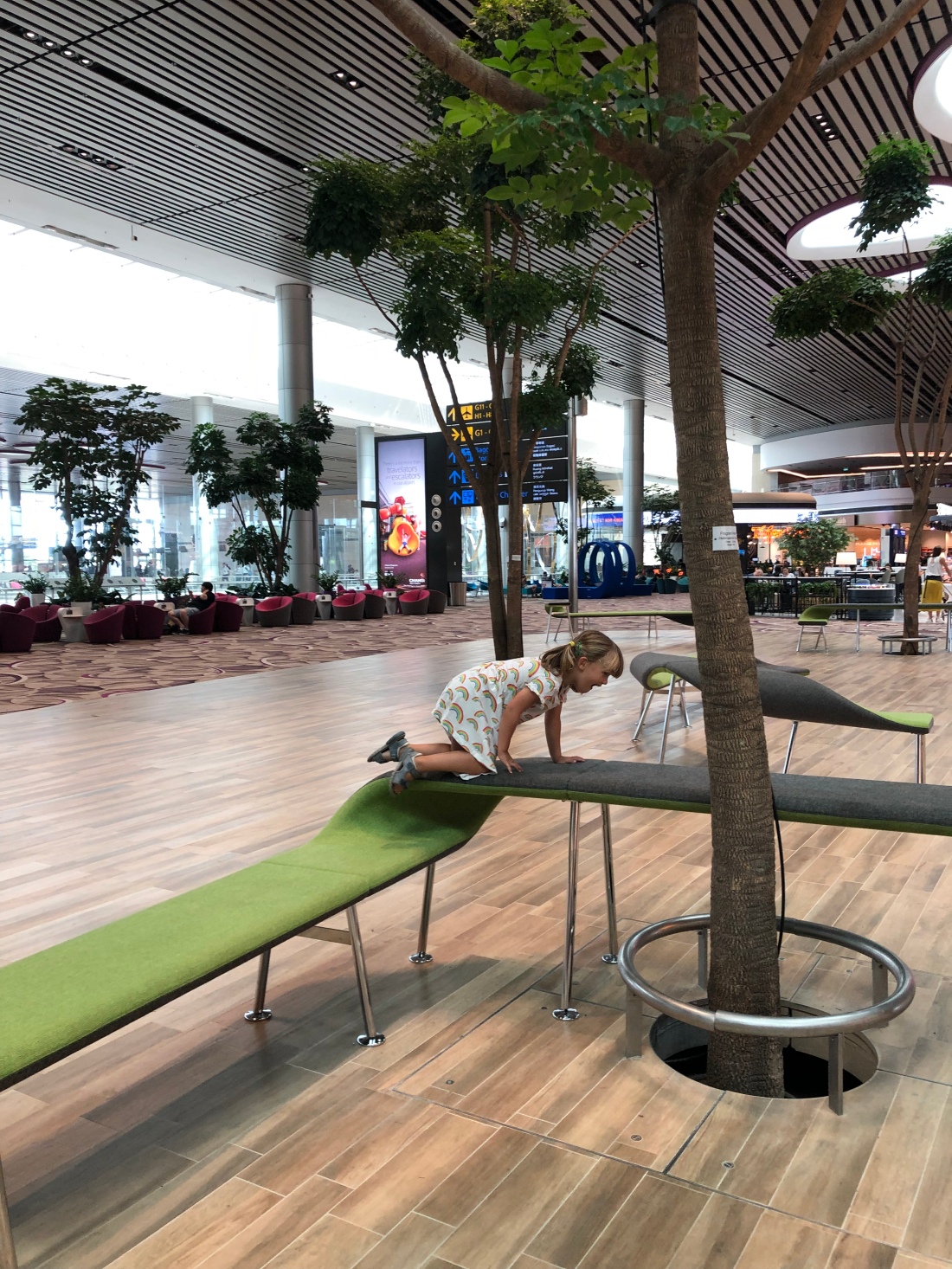 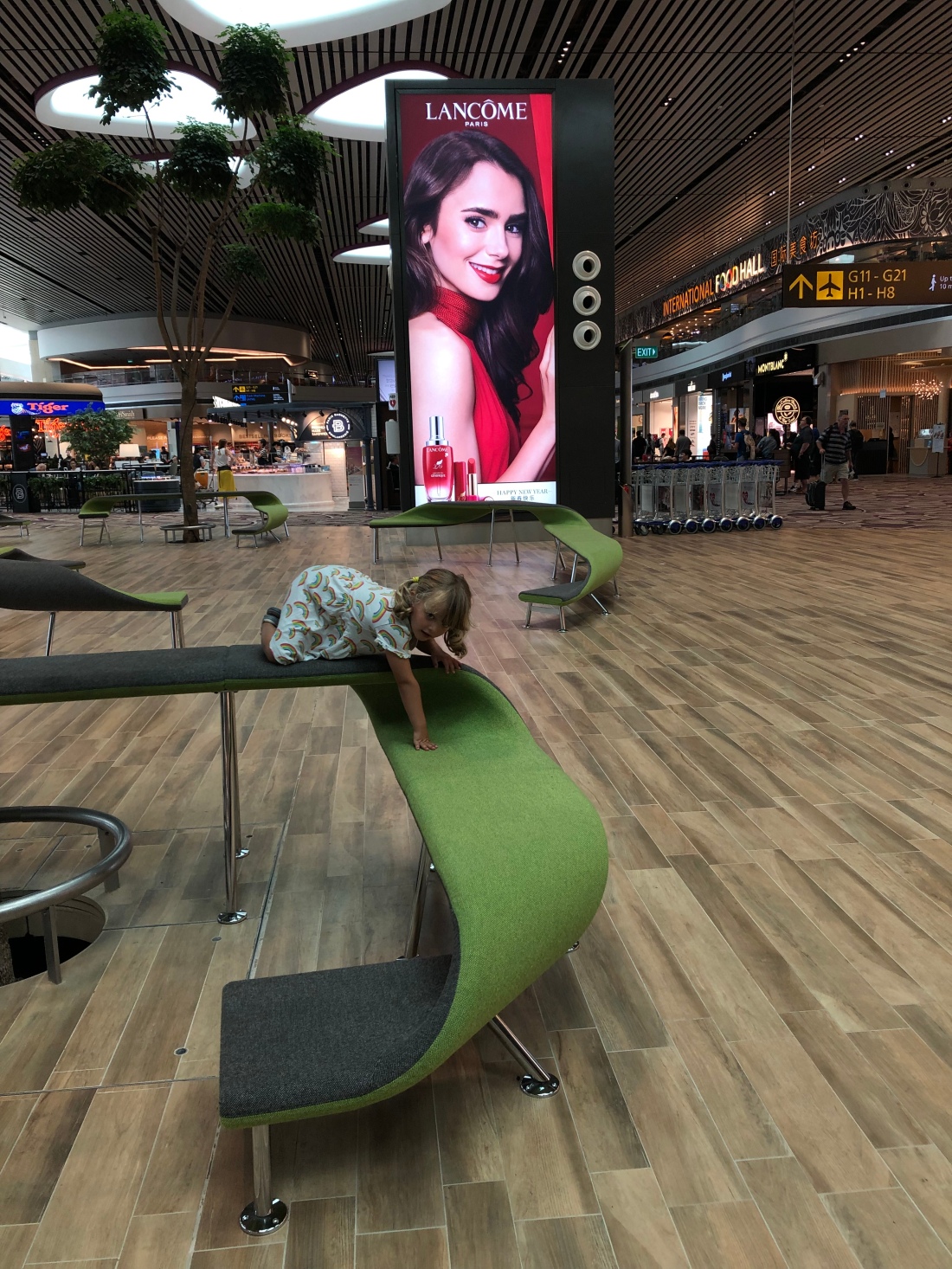 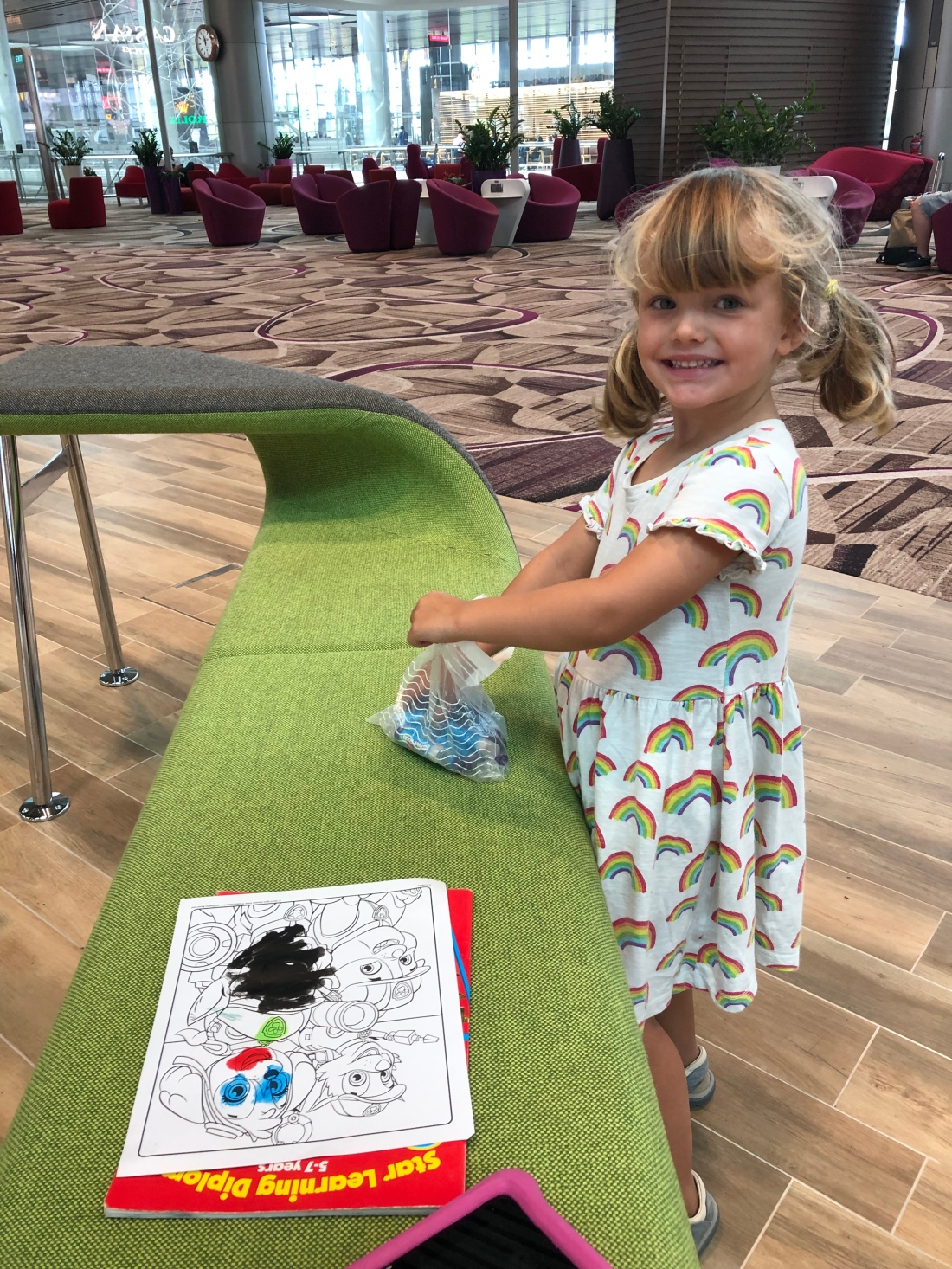 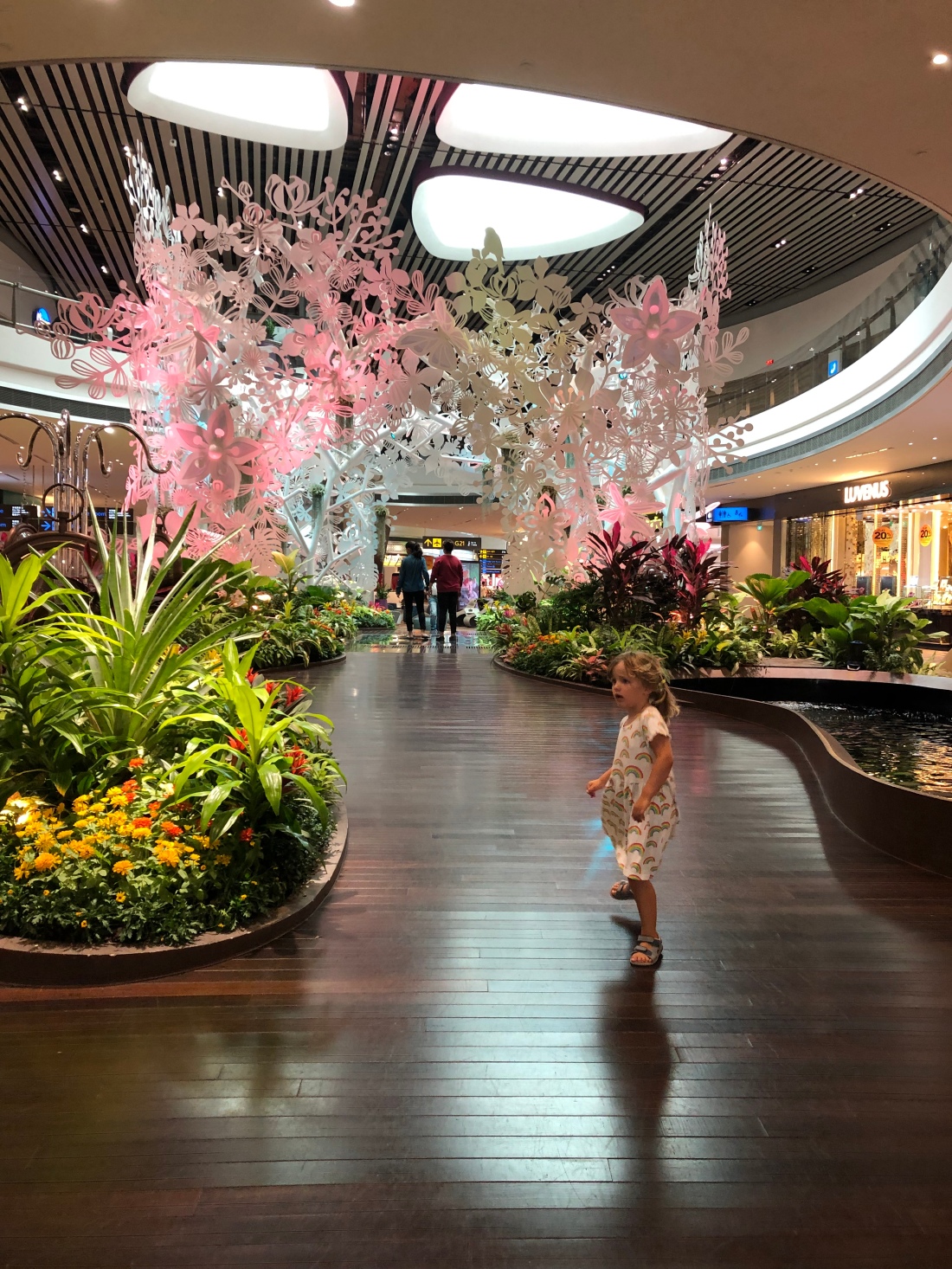 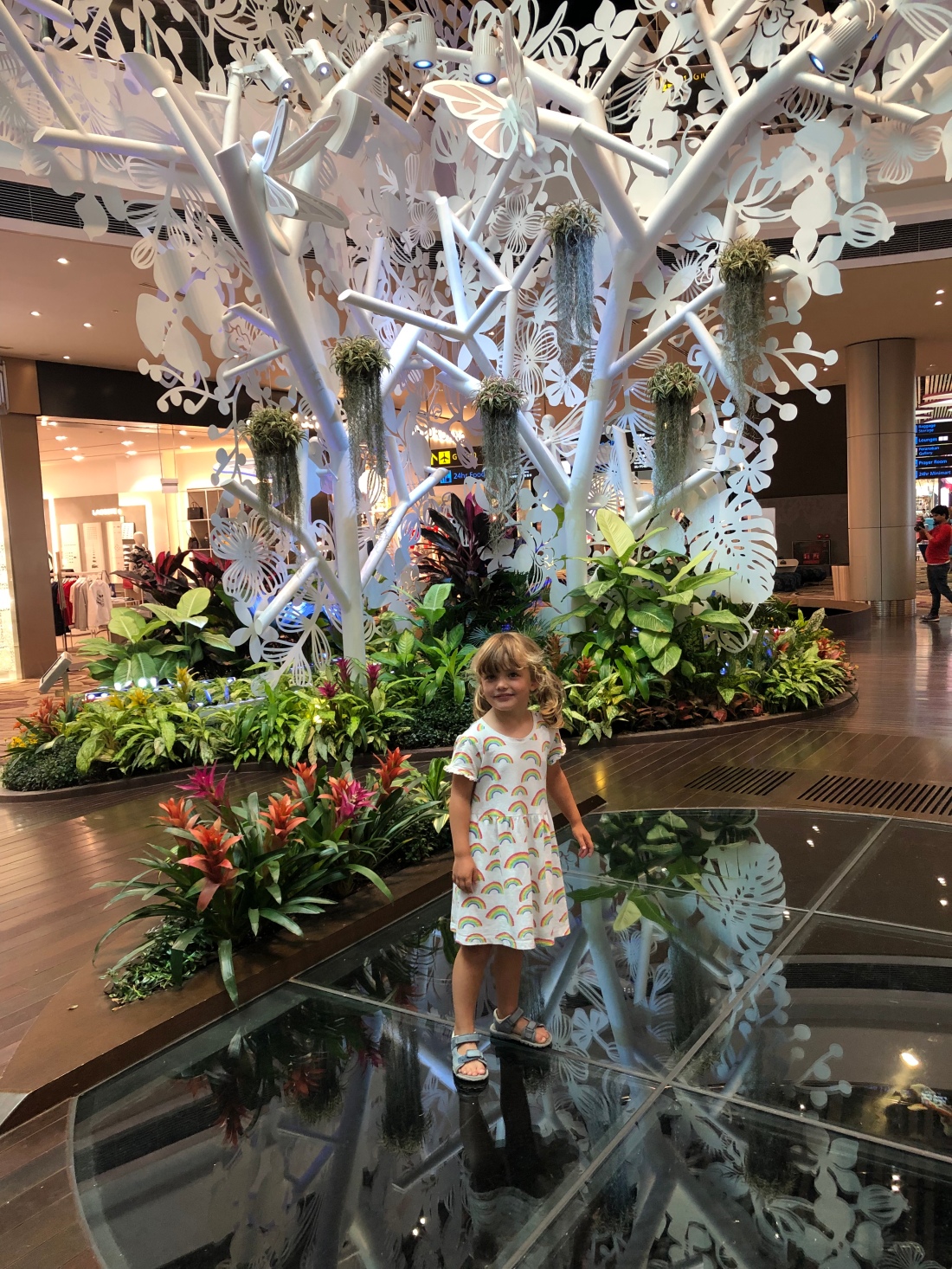 I wandered off to have a look at the shops and came back to present three ideas to Ian: the first was a gold bar that was for sale, Swiss gold 24 karat, with a commemorative year of the pig design on it (it is Chinese New Year and 2019 is the year of the pig). I was given a gold Krugerand by my grandparents when I was born and it is one of my most precious possessions. I wanted to get one for Cornelia as something special and unique, to give to her for her 18th birthday. I also found a Moomin pencil case that I thought would be better than the ziplock bag we’ve been using for eight months! Finally, we needed a Singapore fridge magnet to add to the kilo of magenta we have collected from around the world. I explained all of this to Ian and sent him off to have a look. He returned confused by the price of the gold bar – he loved the idea but couldn’t understand why it was so cheap – but then did a U turn and decided we shouldn’t get it. I was quite annoyed / upset, and although we left with none of the three things I’d suggested (bearing in mind we’d had to withdraw $200 cash the other day and can’t use it in any other countries, so we HAVE to spend the money), I have resolved to get the gold bar when we return to Singapore to fly home.

We were delayed a bit boarding, but Cornelia was having plenty of fun running around and it gave me an opportunity to call to confirm our transfer from Hanoi airport to Halong Bay, which all seemed fine.

On board, once we were seated, a guy approached the family in the row in front of us, saying the dad was in the wrong seat, and showing his boarding pass which confirmed that they both had seat 22G. He summoned over a stewardess who looked equally puzzled until she pointed out that he was looking at an old boarding pass. Somewhat surprised at his own error, he pulled the correct one out of his jacket pocket and hey presto, took his seat two rows back..!

The flight was otherwise uneventful. I’d bought lunch for us at the airport as I didn’t think we would be served a meal on the plane. So I had scoffed my salad, and Ian his sandwich when they tried delivering a hot meal to us! We declined, and I read another book while Ian made a start on The President is Missing. Cornelia was happy watching Paw Patrol and that entertained her until the battery on her Kindle ran out.  After that, she had some time to colour and just play games with me, which was lovely. The flight was just under three hours long, and we managed to get through passport control and collect our baggage quite easily. 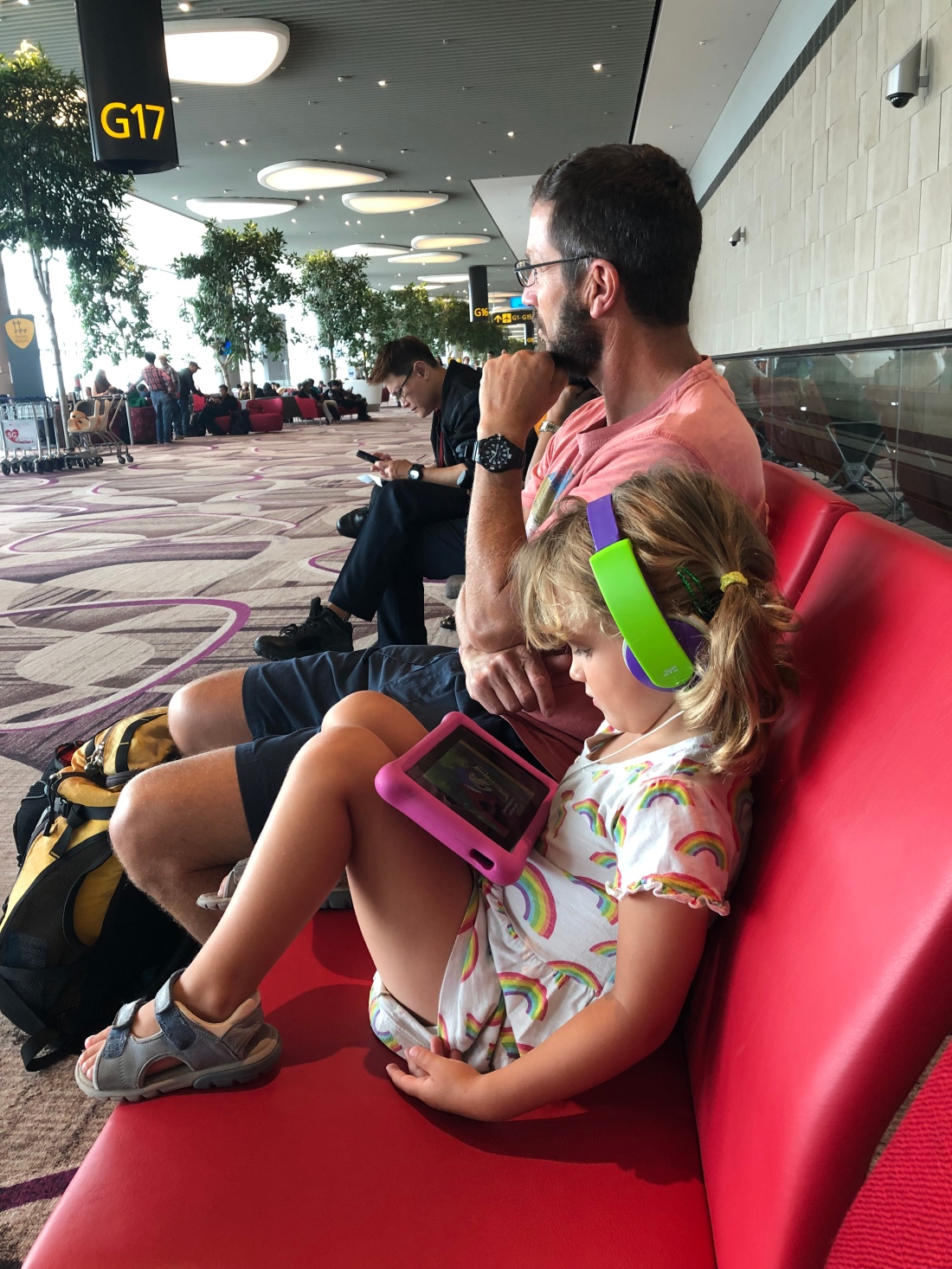 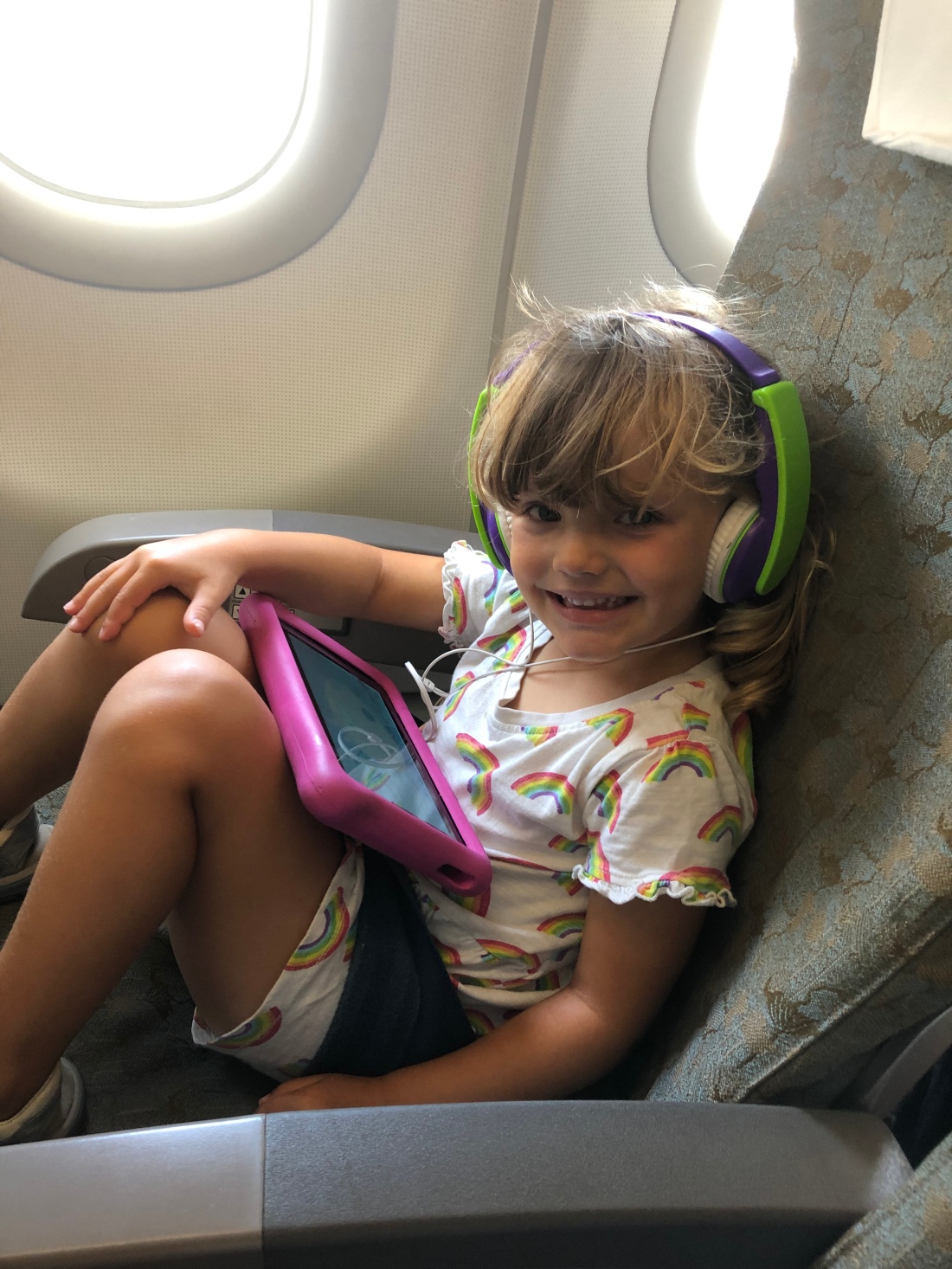 We had booked a transfer and sure enough, our driver was waiting for us with a name card. His name was Gunz and he is 27. We enjoyed on and off chatter with him throughout the journey, although the traffic was so awful getting out of Hanoi that we let him concentrate for much of it! But he was a good driver and we learned a lot about his country and his life. He had been in the army for two years, as it is compulsory for all men before the age of 27. We passed a large coal factory, which is still a main source of fuel in North Vietnam (being geographically close to China).  Hanoi also houses the largest Samsung factory in the world, which seemed to be single-handedly responsible for the extraordinary volume of traffic. It employs over one million people in Vietnam and most of them seemed to be on mopeds three deep on the hard shoulder, or in cars forming three lanes on a two lane road, having left work for the day!  He said that they worked in shifts at the factory, but had an hour and a half rest halfway through.  I found his use of the word “rest” interesting, and asked if they had three meals a day.  He laughed and sounded very surprised… No, he said, just breakfast and an evening meal.  They are generally too poor and/or too busy to eat three times a day.  Gulp. 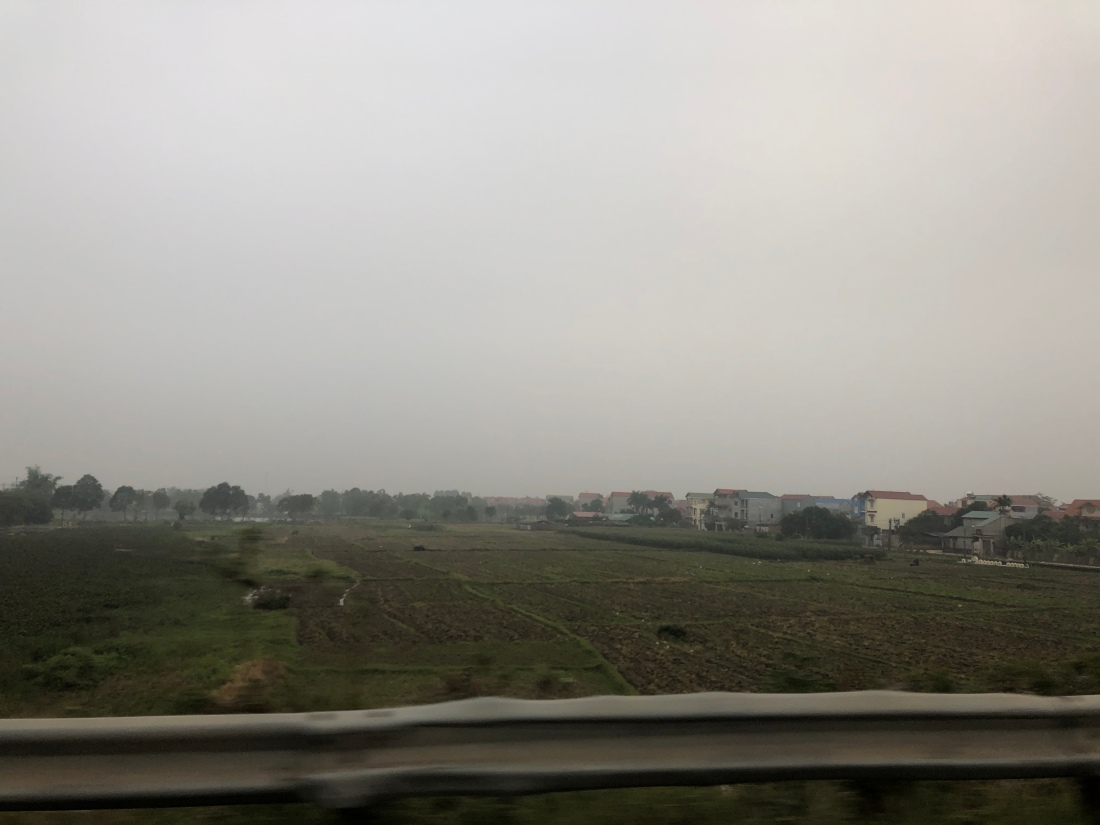 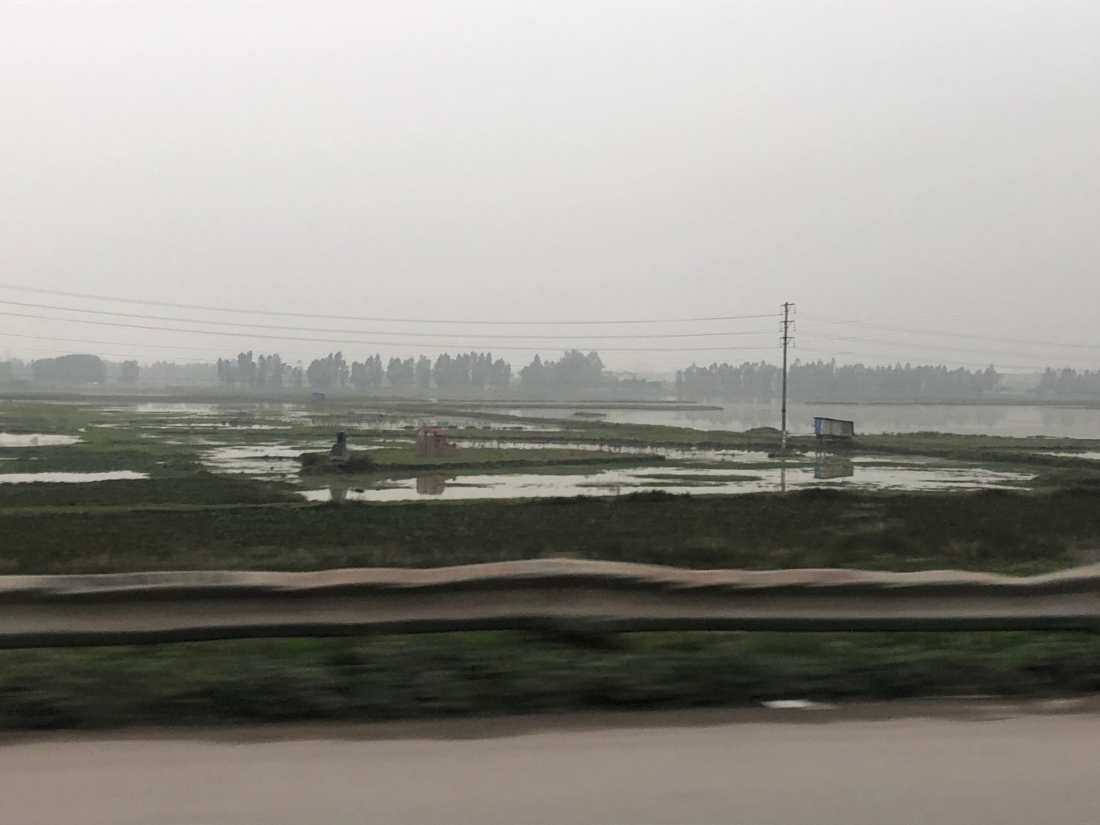 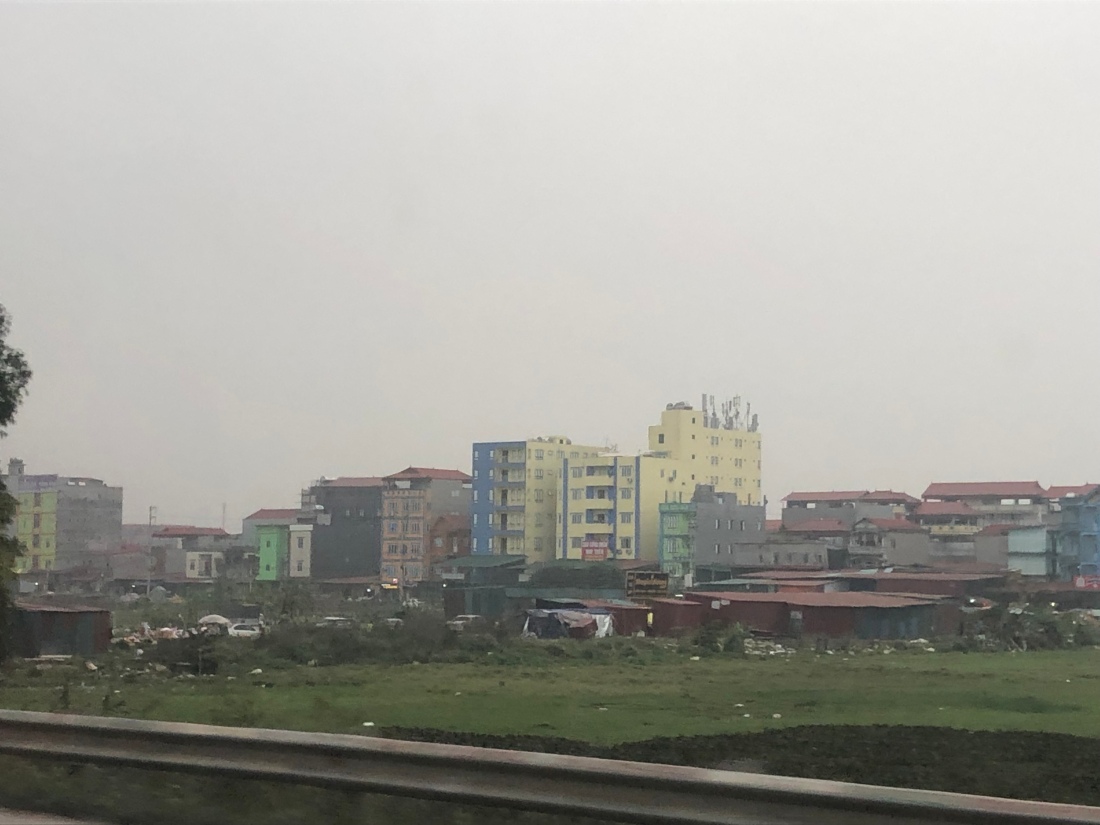 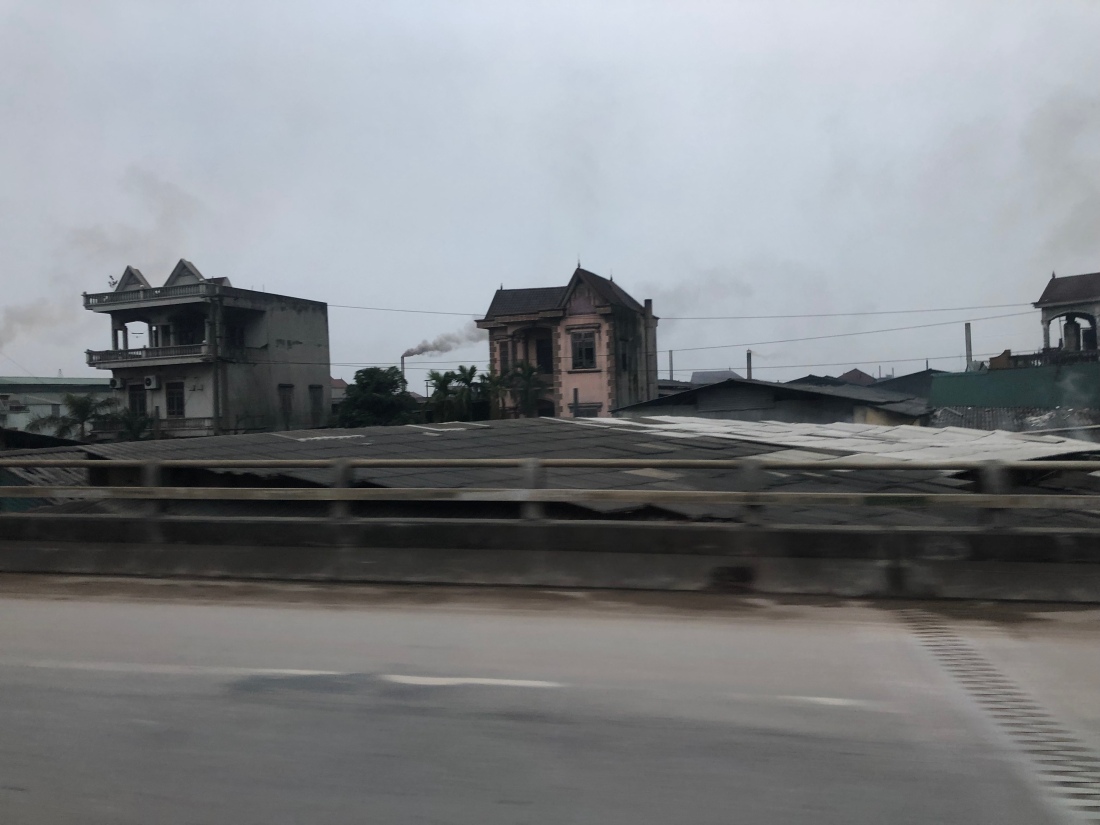 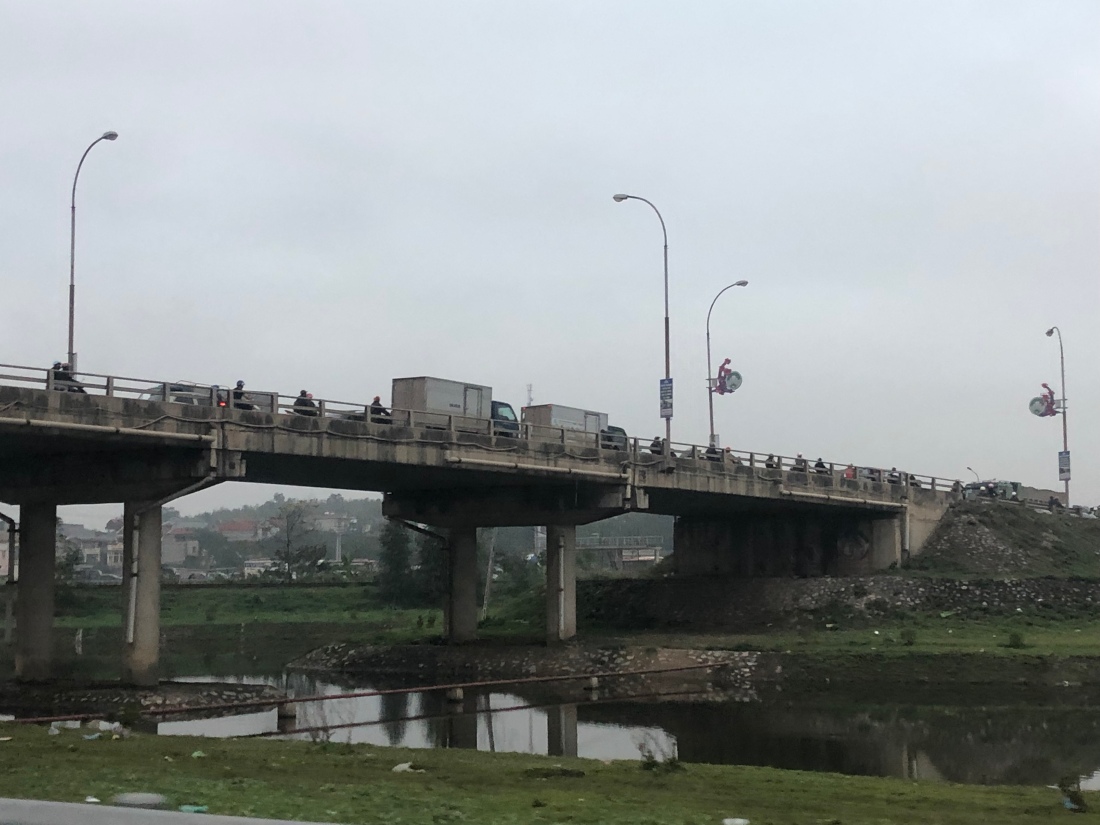 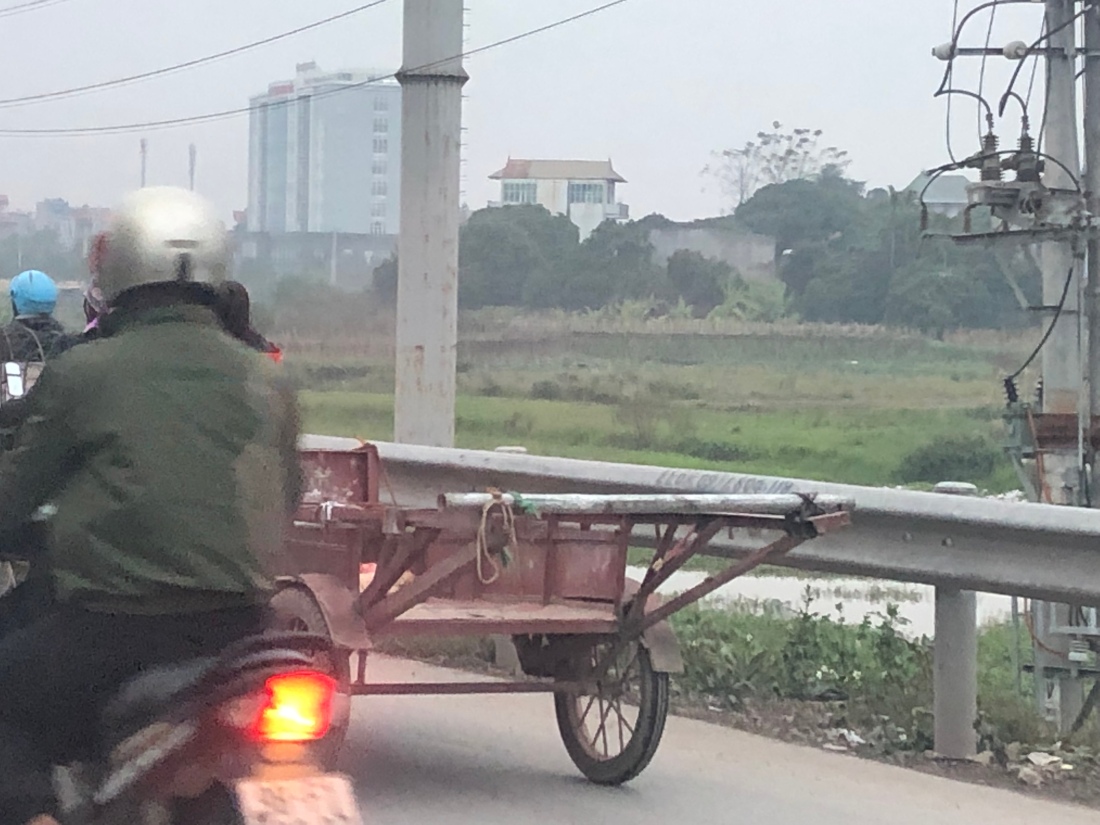 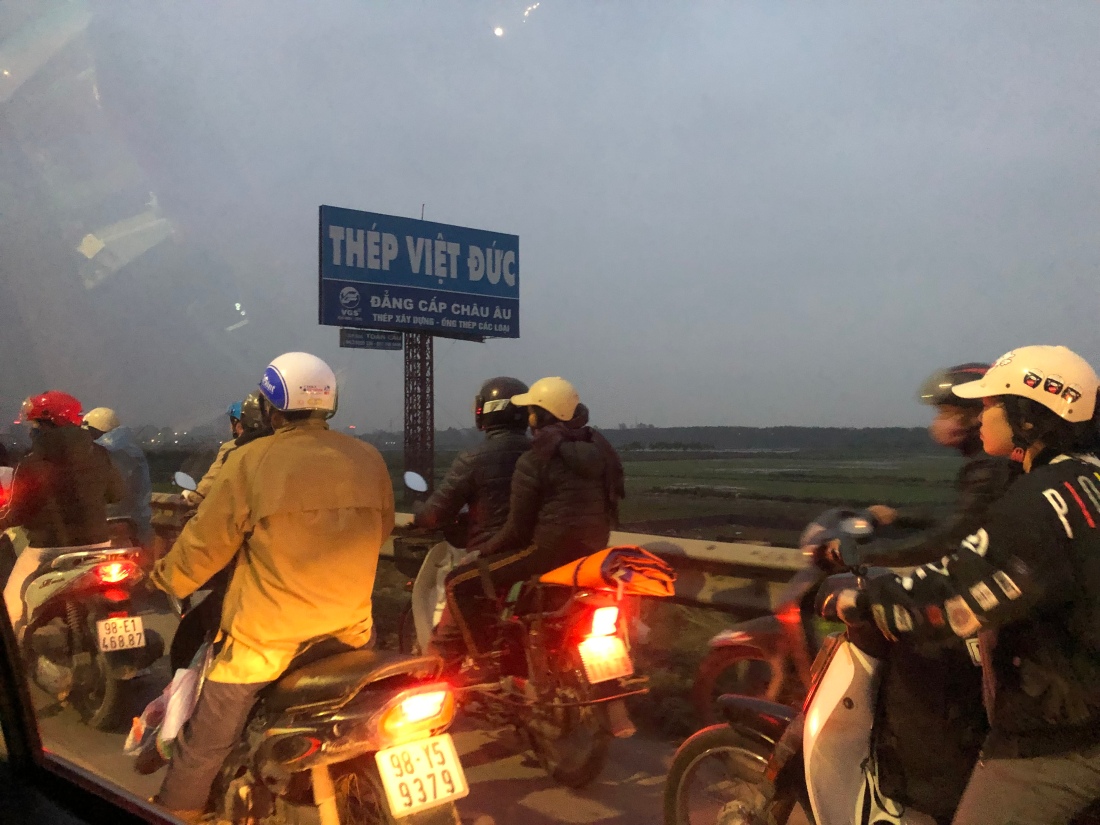 We stopped off at a large indoor shopping area, that sold works created entirely by disabled people, so that they can earn a living.  It is quite an extraordinary place and some of the art and sculptures on display were absolutely brilliant, disabled or not.  I would happily have bought a lot of stuff there (they even had the shipping rates to send your purchases direct to the UK) but we were on a food mission, as the driver had to have a compulsory stop for thirty minutes, before we could leave again.  The restaurant was tucked away at the back of the building, and I ordered the chicken chilli and lemongrass, dish, Ian had chicken & rice, and Cornelia tried the chicken burger.  Mine was quite tasty, but Ian wasn’t too impressed with his.

Back in the car again, Gunz put “Baby Shark” on his DVD screen for Cornelia to keep her entertained as we drove on.  It is funny to see how something like this has travelled all the way across the world, and is adored by kids everywhere! She proceeded to watch a selection of joyfully irritating songs and videos as we drove the last hour to Vin Pearl resort, finally arriving around 21:15. The lobby to the hotel is separate from the main hotel complex, which is actually a short speedboat ride across the water to a small island. We checked in, paid a seven million Vietnamese dong deposit (£236) and had our photos taken for security. Our luggage was added to a growing pile of new guests’ luggage, and I was given a baggage tag recording our five bags which would be delivered to our room.

We then took the boat over to the island and were driven in a little electric buggy to our room – 115. It is a decent-sized room with two beds for me and Ian, and a third smaller bed for Bugsy. She was exhausted and desperate to go to sleep, but we had to wait for our luggage to arrive before we could put her down. It took over half an hour for it to arrive, and once she’d brushed her teeth, we managed to get her into bed, and she was asleep almost immediately (and by about 22:20). Vietnam is an hour behind Singapore. 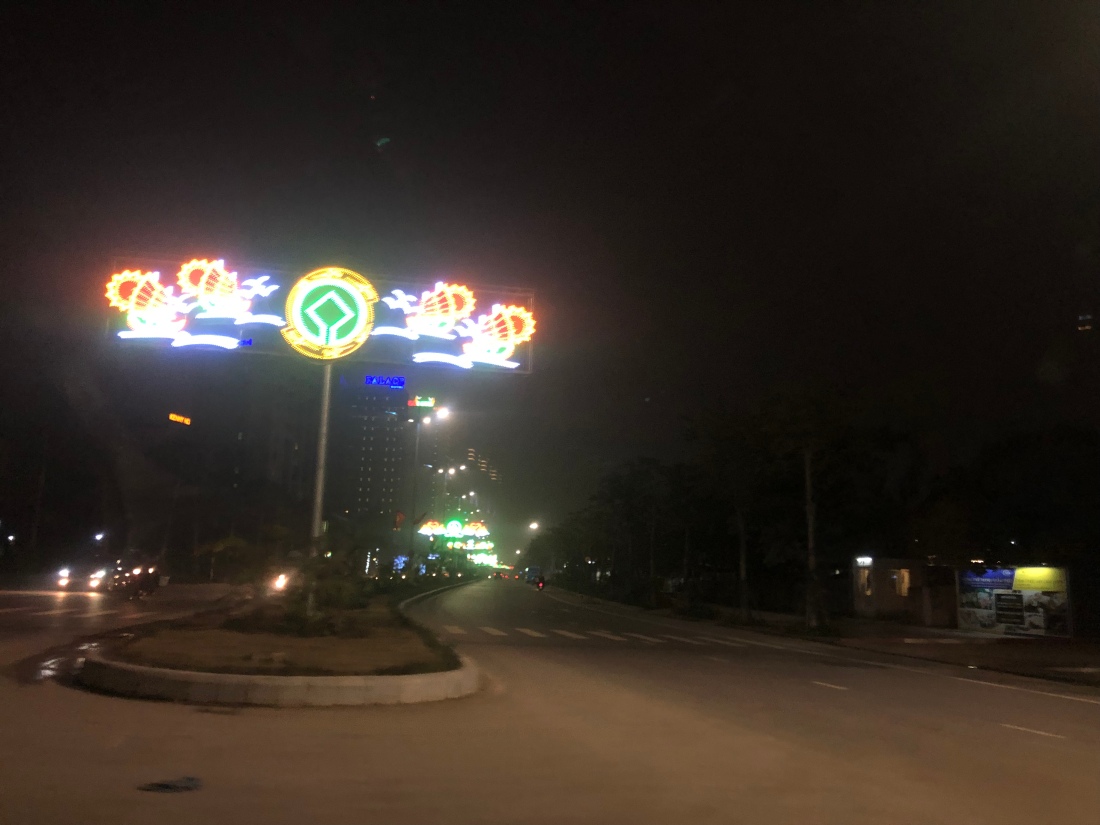 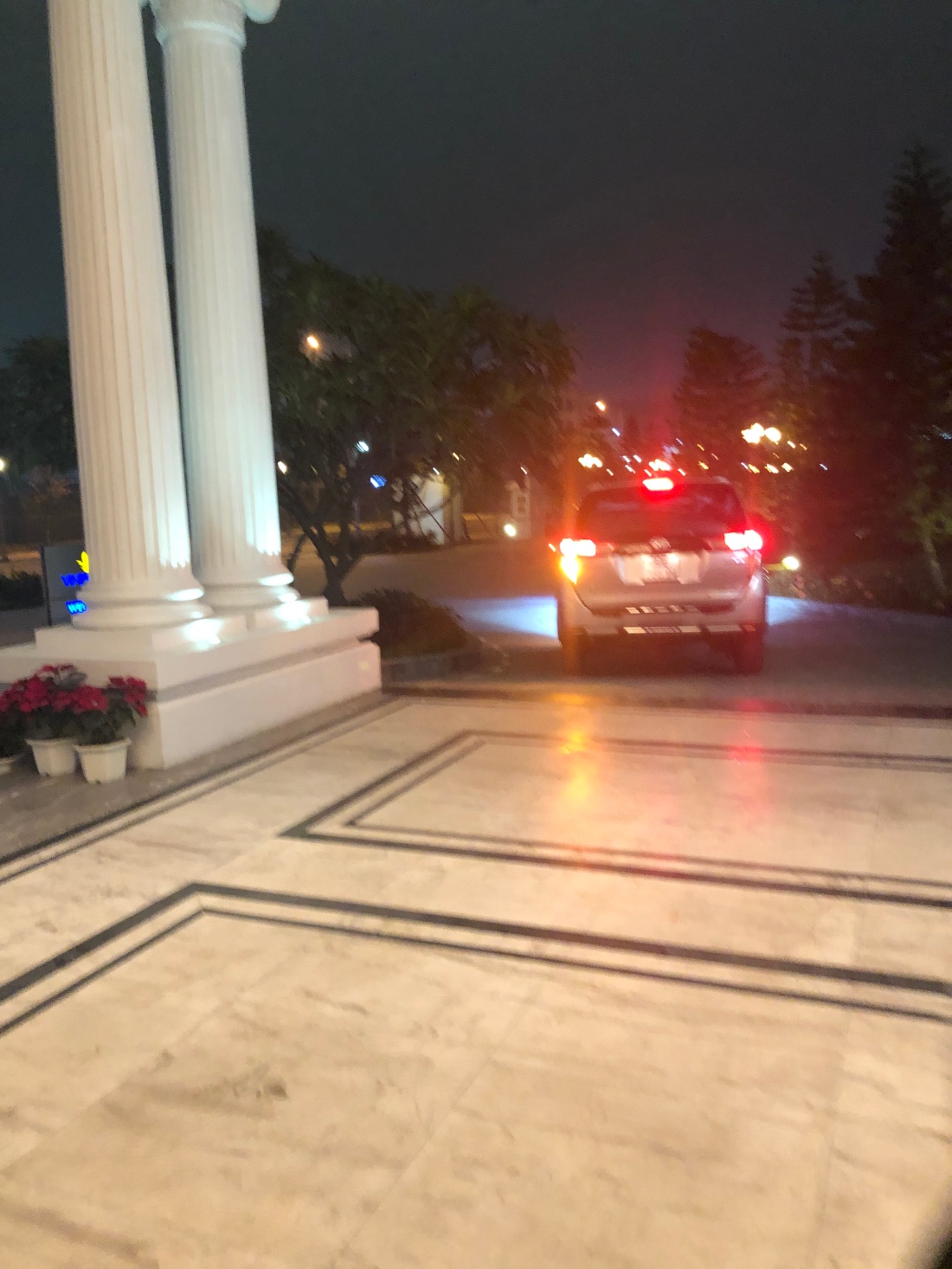 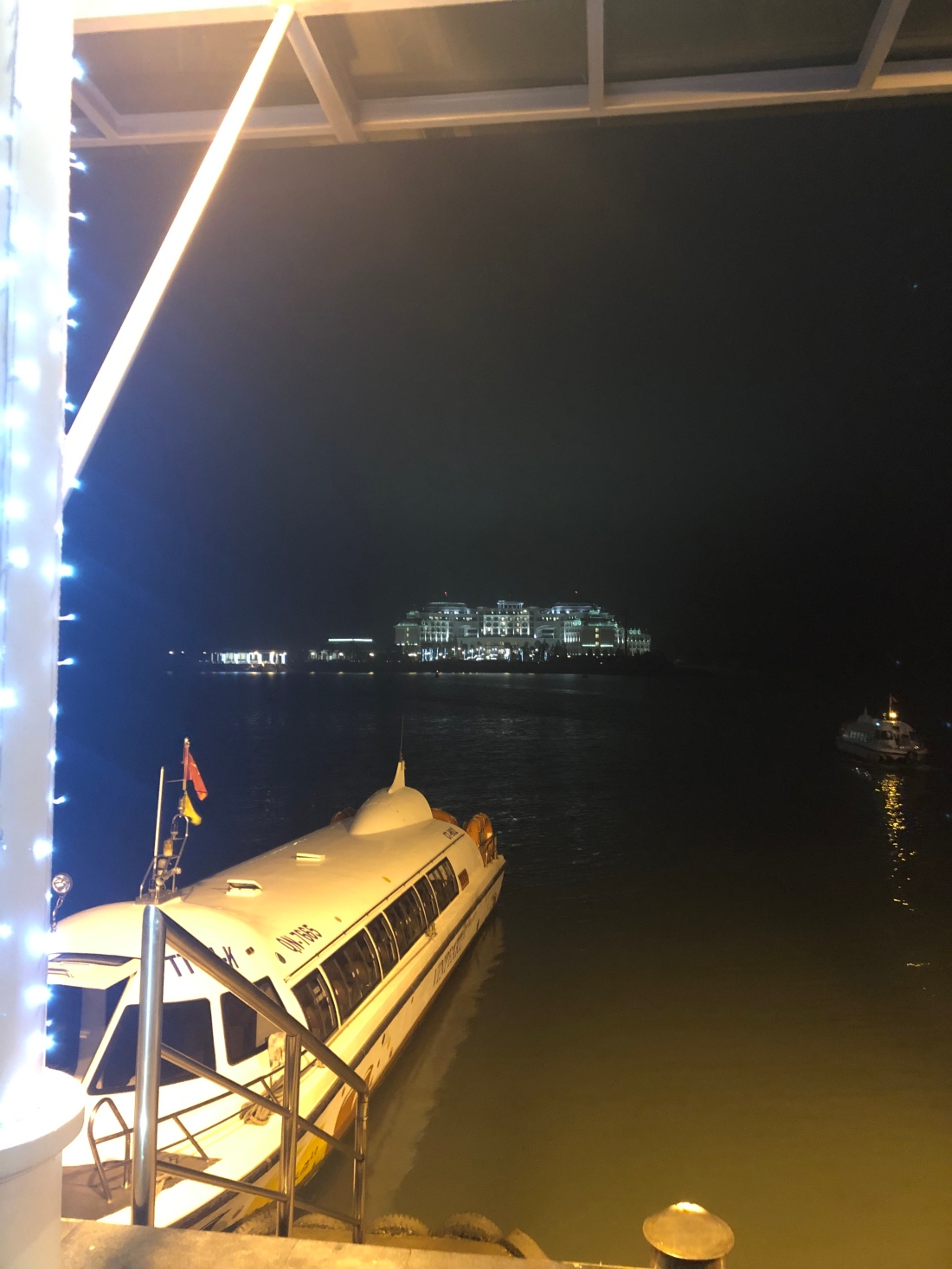 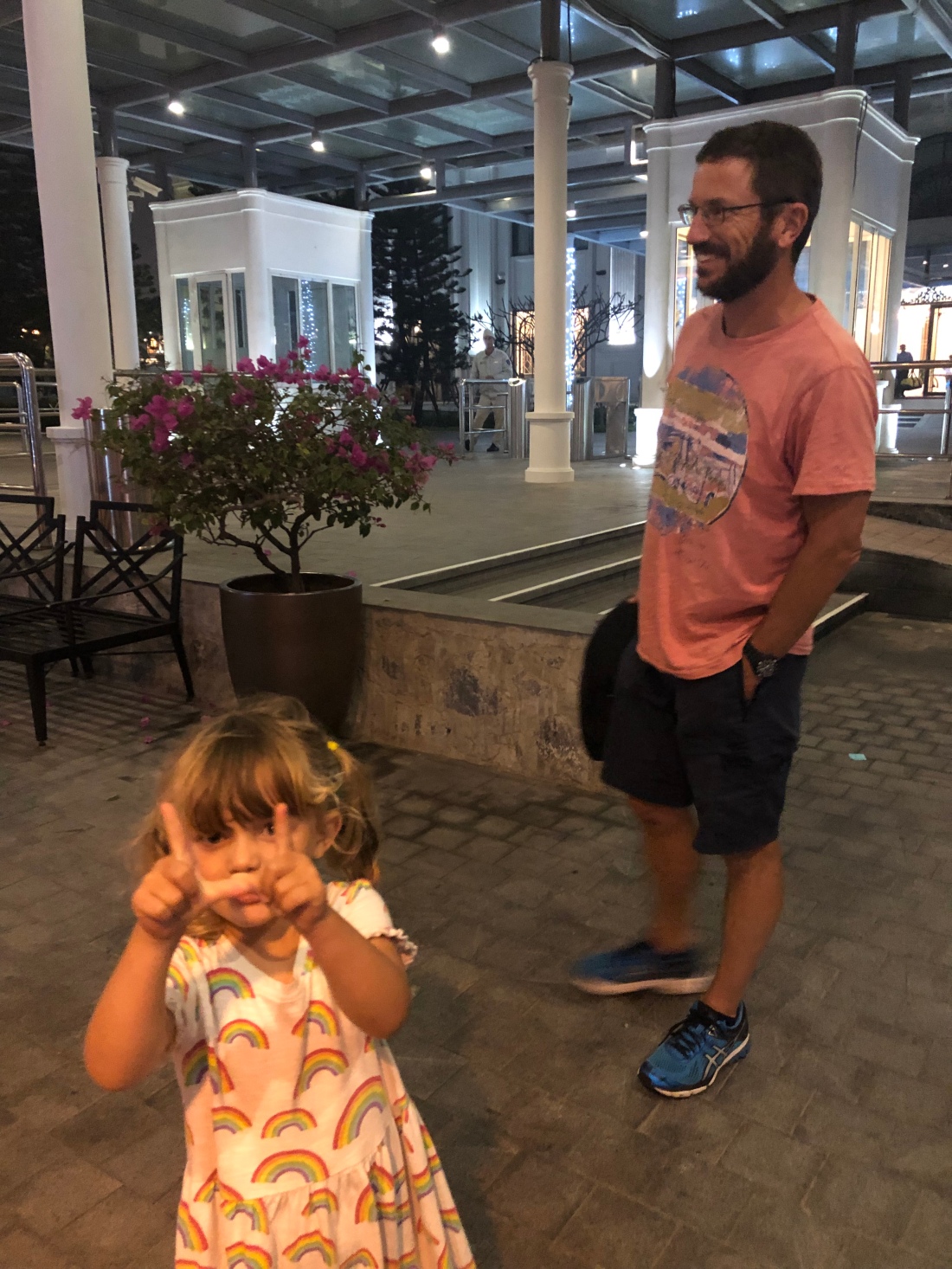 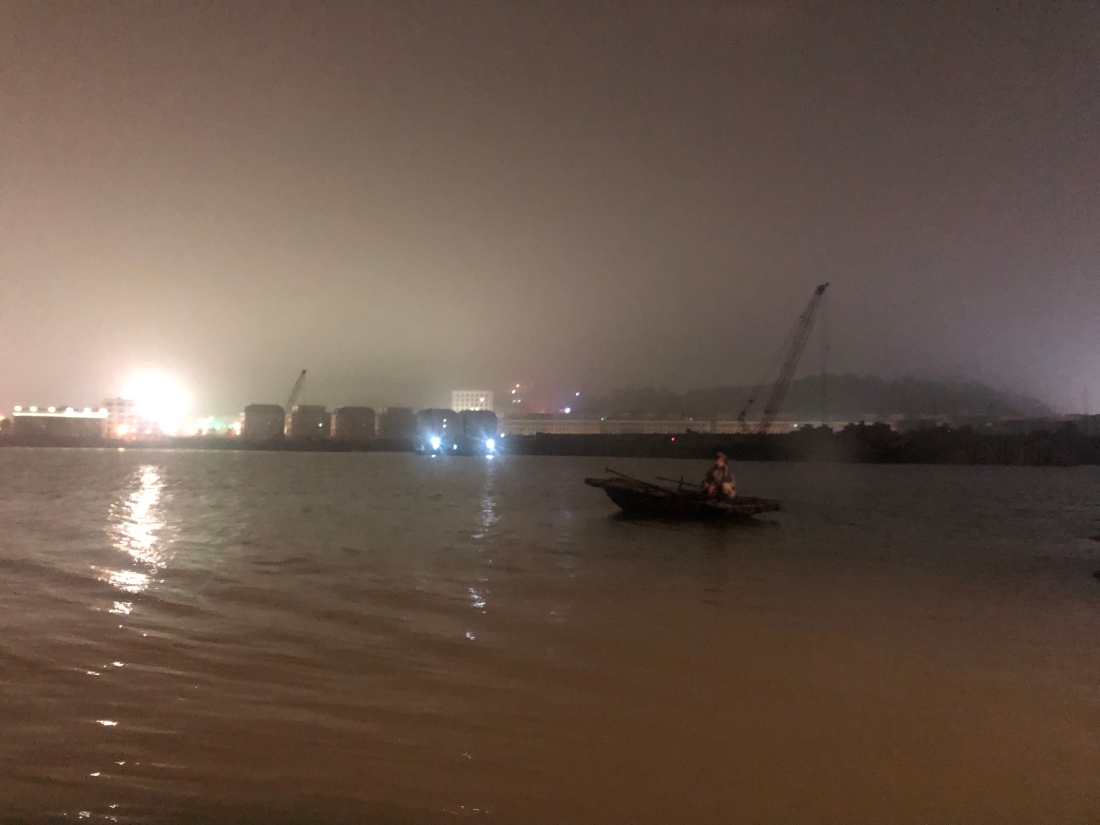 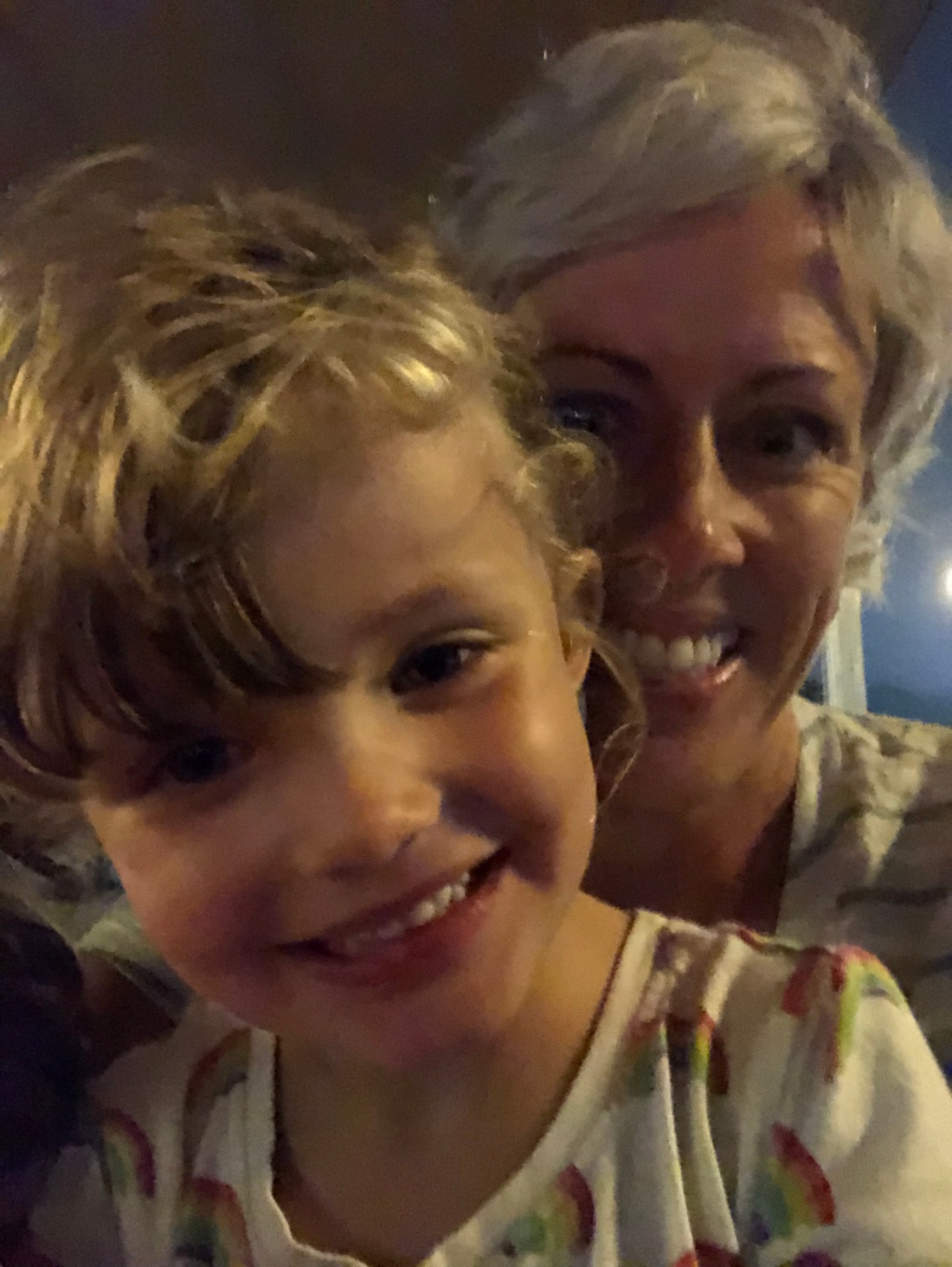 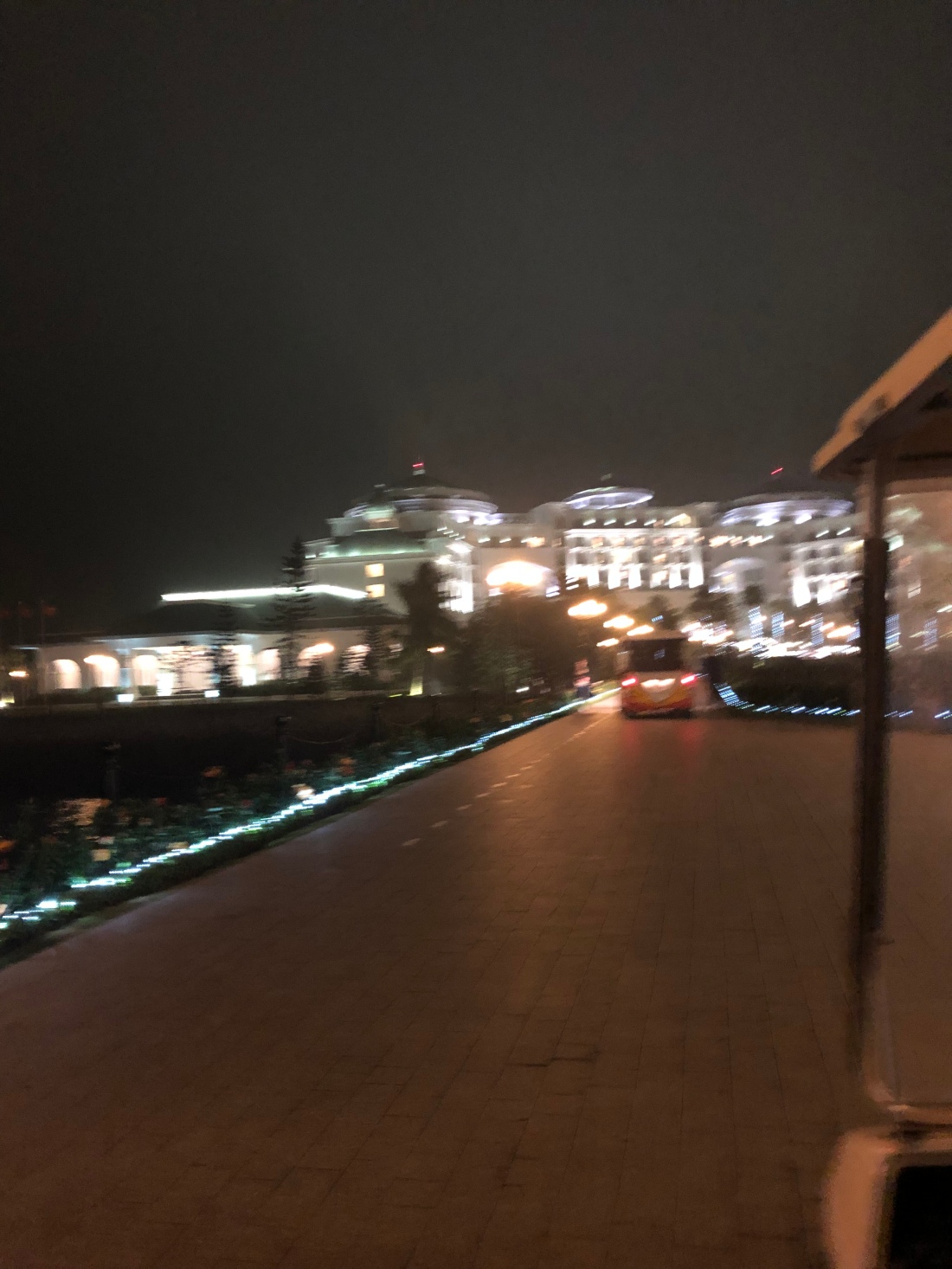 Once she was asleep, we brushed our teeth and crawled into bed. We are excited to see what everything looks like in daylight!