Cornelia called out for us just after 07:00, and I went in for a cuddle with her before she then came to join us in bed for a while.  We had breakfast together, then Bugsy watched a Paw Patrol DVD she’d found in a cupboard, while I put on a load of laundry.  Although were up and ready to start the day by 09:00, thanks to yet another time difference, by the time we’d hung the washing, showered, and sorted ourselves out, it was 11:00 before we left the apartment!  We are keen not to waste any more mornings, so this evening we are sitting down to plan our time a bit better, as it seems as if there is loads to do in Perth.

The Paw Patrol DVD turned out to be a dodgy pirate copy that stopped working after about twenty minutes, so Cornelia was allowed a bit of TV while we did our morning chores.  To her great joy, Paw Patrol was also showing on Nick Jr, so she was glued to that for FAR too long!  The Paw Patrol theme continued as she stuck a Paw Patrol plaster on to Ian’s heel where his sandals had rubbed.  Ah, I love it when the simple things bring such happiness!

TV switched off and beach bag packed, we walked the short distance to the waterfront, posting Karen’s birthday card on the way and popping into Cole’s to see if we could find a new bucket and spade for Bugsy. Sigh… the return of the consumer-child. She wanted a large pink bucket, a red spade and a separate set of beach toys. When I suggested that we may be able to get a better-fitting set (as opposed to lots of pieces that didn’t fit together properly) all hell broke loose. Well, maybe it wasn’t quite THAT bad, but instead of listening to reason, as she would normally, she burst into tears with cries of “I want, I want!” which always ends up with her getting nothing. She refused to listen to me, so I left her on the floor of the shop crying until she came over to apologise. She had decided that she really wanted the pink bucket and red spade but wanted different beach toys. So, once again, I explained that she could have what we had offered or we could go and look for a better, complete set. But that we weren’t splitting the two up – her choice. She gulped a few times, then said she’d like to look for a better set, and asked that if we couldn’t find one, could she please have the pink bucket etc. At last, we had a sentence that didn’t include a “I want” and did include a “please”! 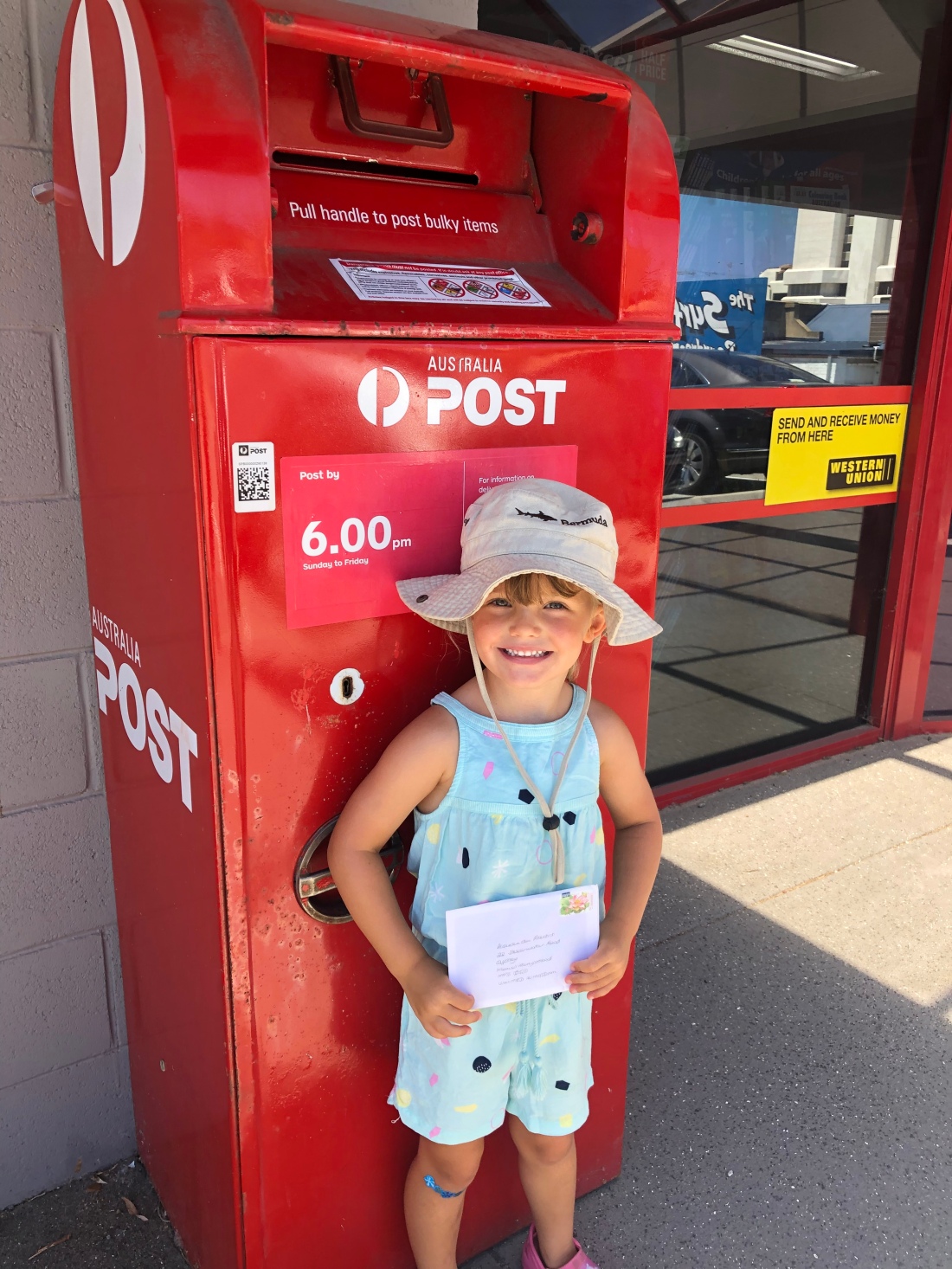 We left the shopping centre, with Cornelia still mumbling and occasionally making the point that she was still crying a bit, but she cheered up immediately upon spying the Whale Playground- a brand new kids’ area. There were no obvious beachfront shops that sold buckets and spades, so Ian went to buy the original bundle, while Cornelia made herself at home in the playground.  She had a wonderful time, following a little girl with pink hair around the Whale Playground – wherever Pinkie went, so did Cornelia! I wasn’t sure how welcome this adulation was, but when I saw Pinkie waiting for Cornelia at the top of the slide and showing her new ways of going down, I knew all was well! When Ian came back with her new beach toys, she came over to get them and her and Pinkie settled down in the sand to play. I went over to the girl to find out her name – she’s called Indie and is turning 7 on Thursday. Her little sister, Scarlett, joined them and they played together for the next fifteen minutes and I chatted to their mum, until Ian returned from his recce for lunch spots. 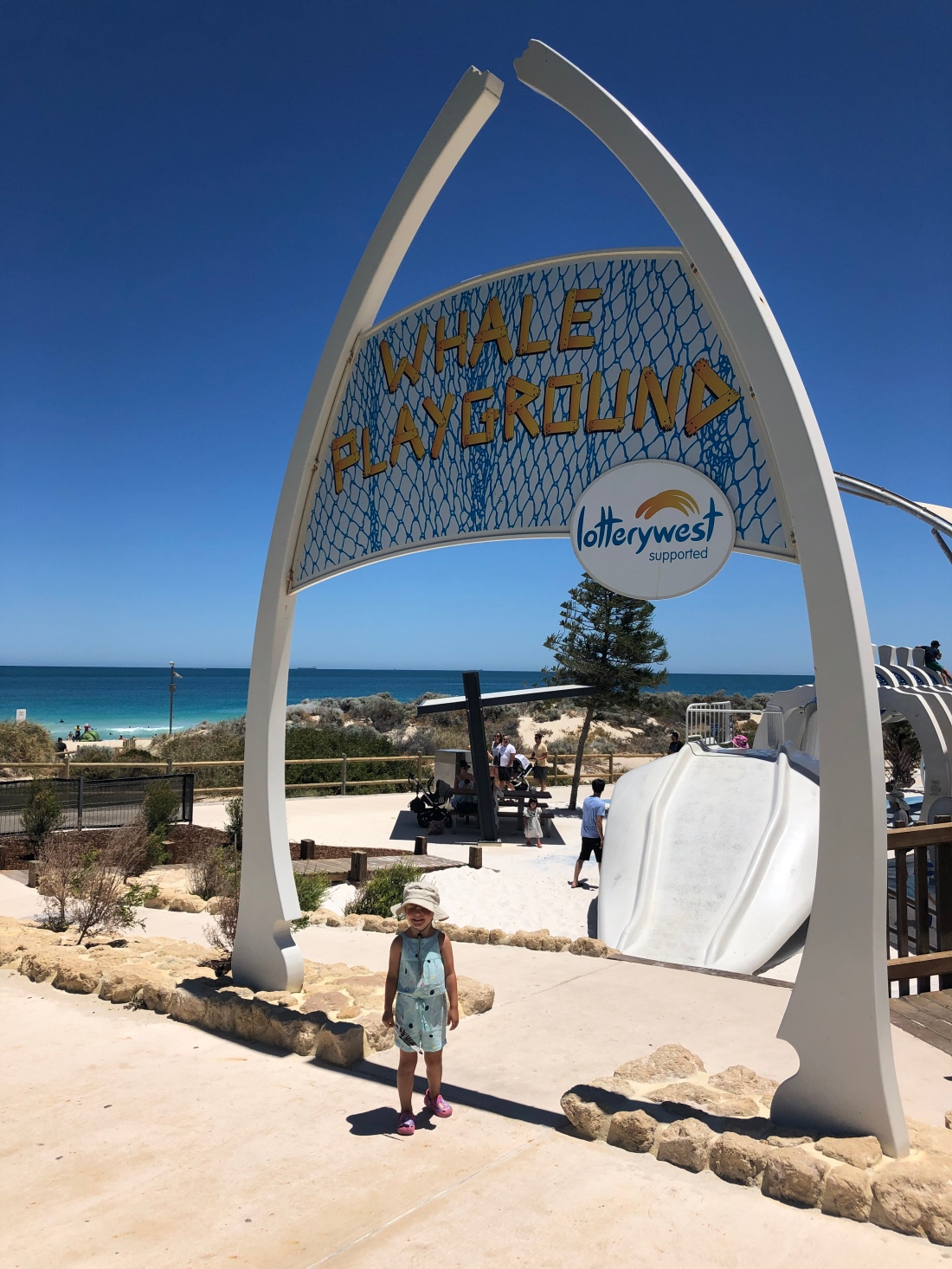 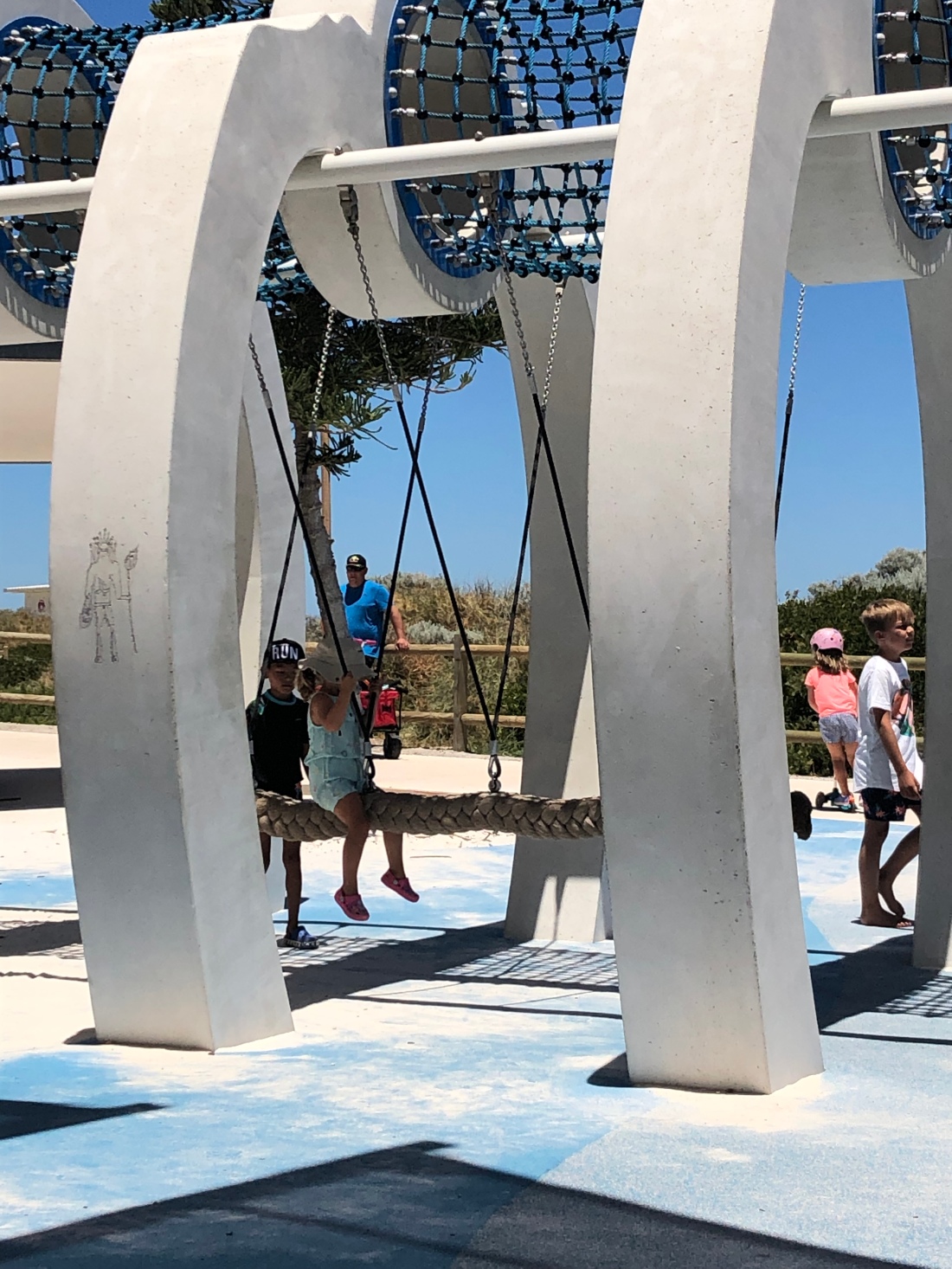 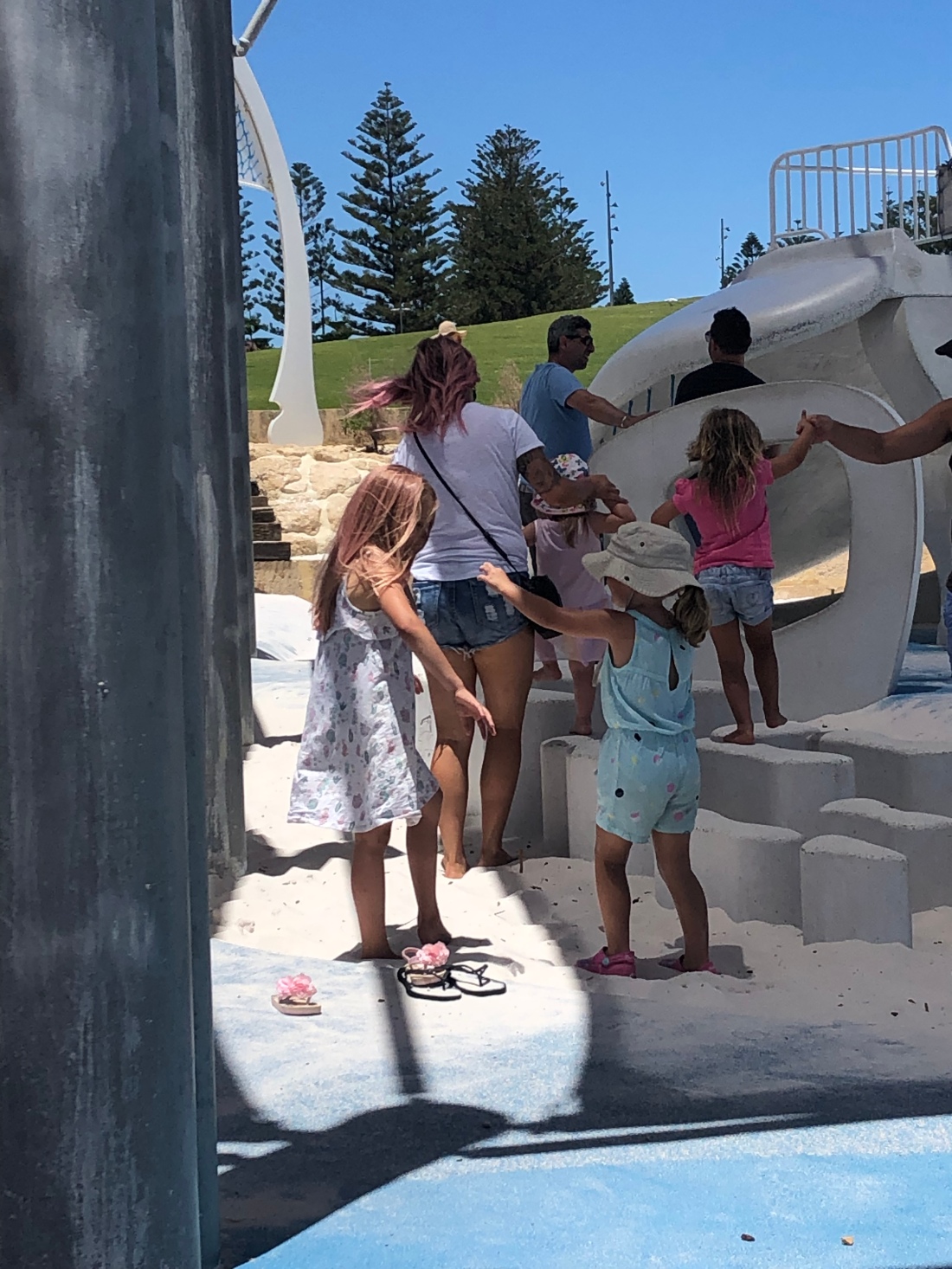 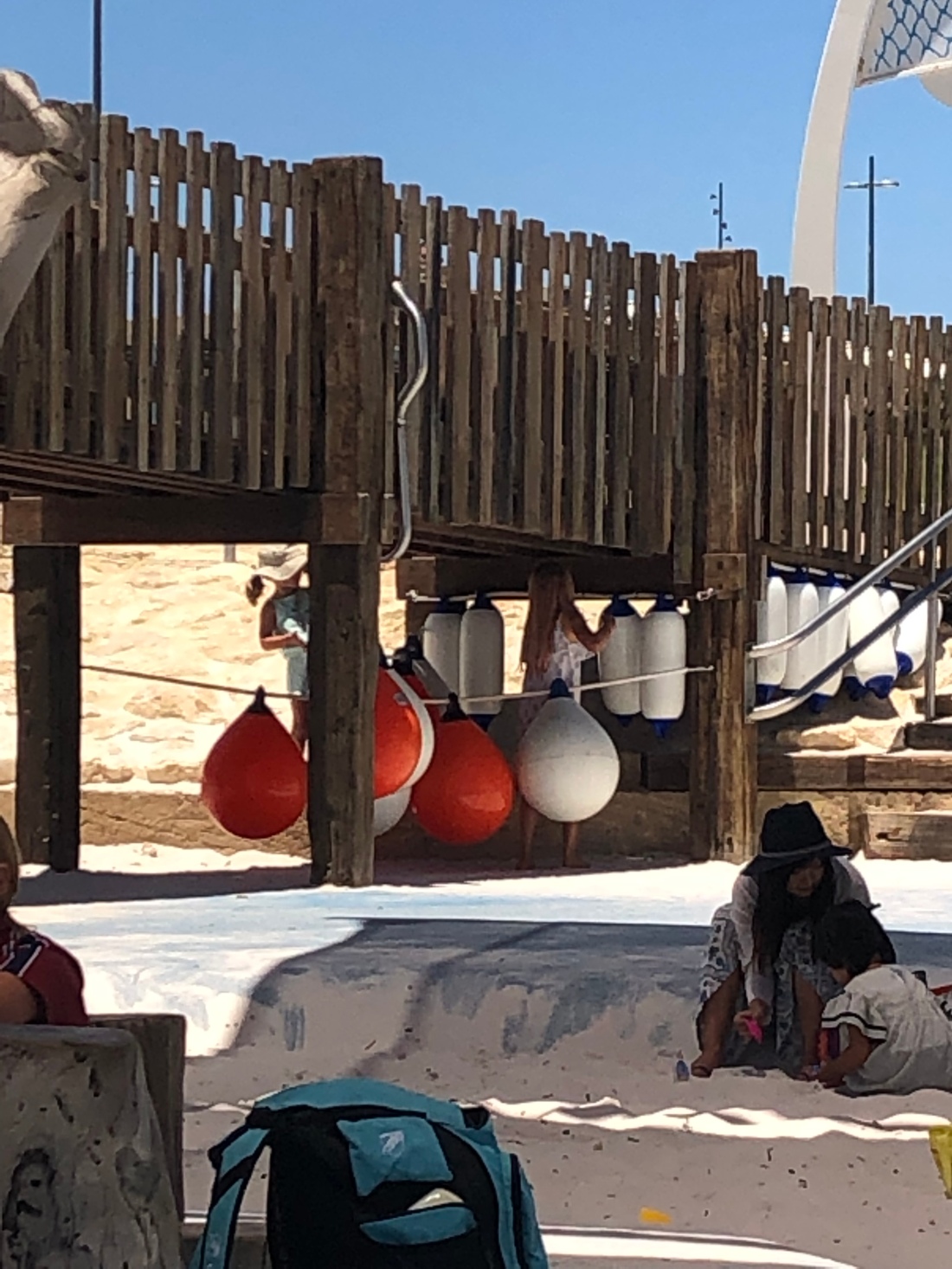 Without any real objection, Cornelia collected her new sand toys together, said goodbye to her friends (with mutually optimistic wishes that they would see each other again) and we crossed the road to a cafe which had some seating available.  To my surprise, it turned out to be a kebab shop, but as Ian and Cornelia had both decided what they wanted to eat, I didn’t mind staying.  Ian went in to order, and after about twenty minutes, he was called in to collect our food.  He had a lamb kebab, Bugsy had chicken nuggets and chips, and I had a chicken salad with a Greek salad.  It was all “fine”, but I was happy to leave and head to the beach for the afternoon. 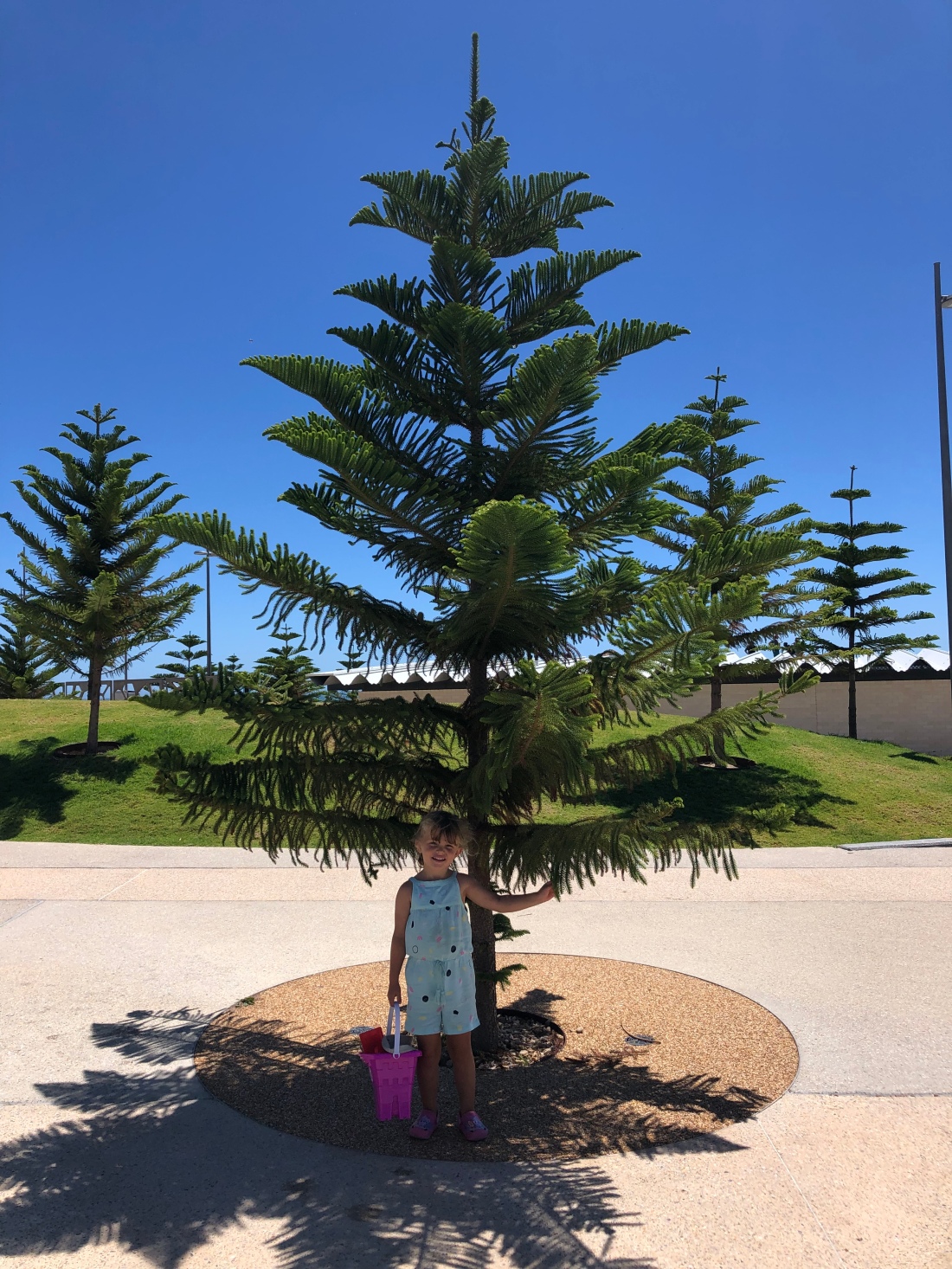 It was VERY windy down on the beach, but stunningly beautiful.  I must confess to being quite lazy all afternoon, and asking Ian to keep Cornelia occupied while I lay in the sun and people-watched for a couple of hours.  He turned her into the Little Mermaid and held her hand while she jumped some waves, and we did our best not to let any sand get carried away by the wind into the faces of our neighbours.  Ah, our beach neighbours – now, they were funny.  Very Irish, in a stereotypical not entirely pleasant way.  Our favourite phrases from the afternoon included a “Ach, there’s plenty of room for you!” to a woman who asked if they could maybe not set up immediately next to her (they were literally two feet away from her towel), and a cry of “Ask your feckin’ mammie, not me!” relating to some issue one of the kids had.  They were loud and sweary and not the most considerate of families, but at least Ian and I had some mild entertainment from it. 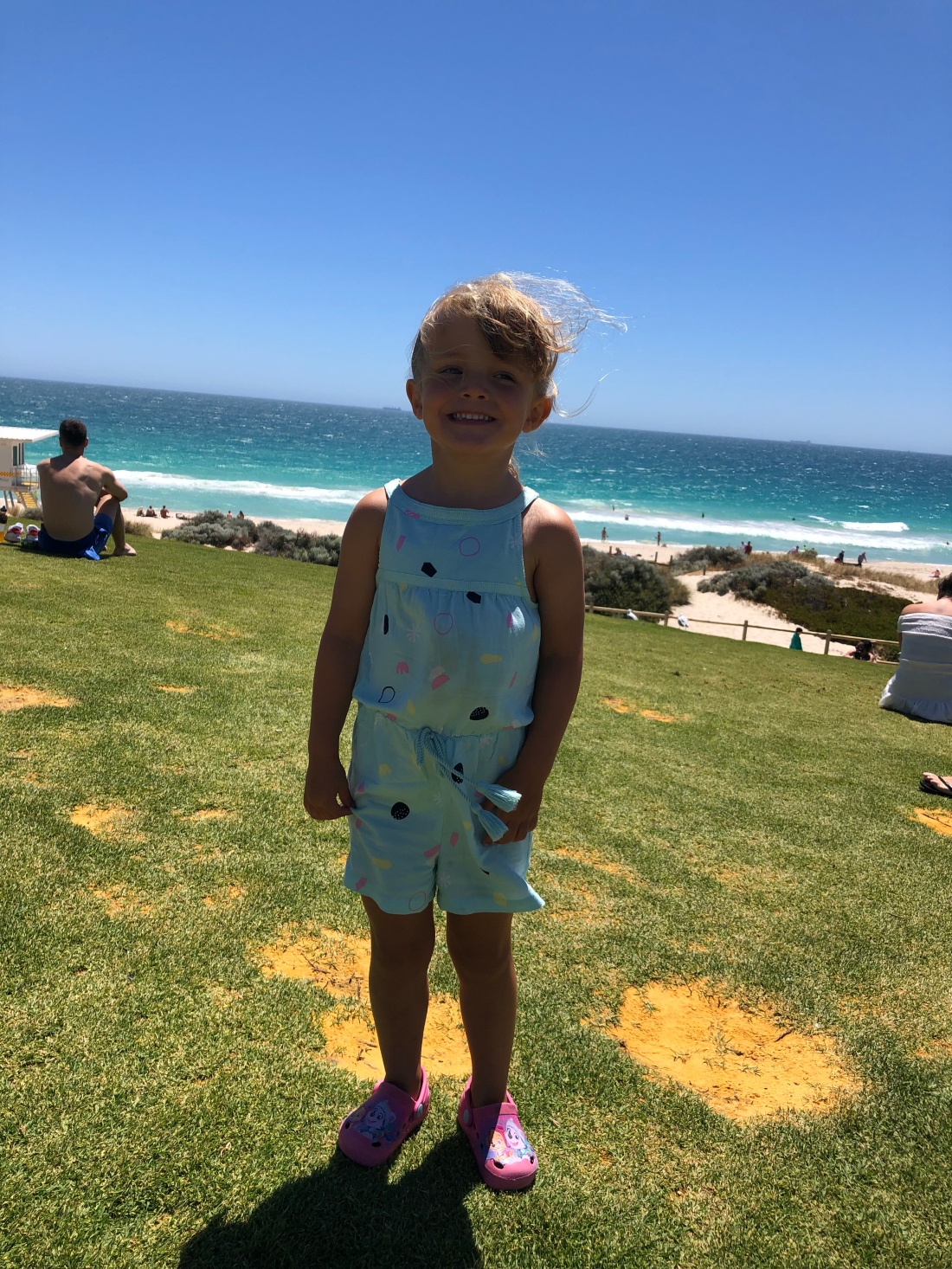 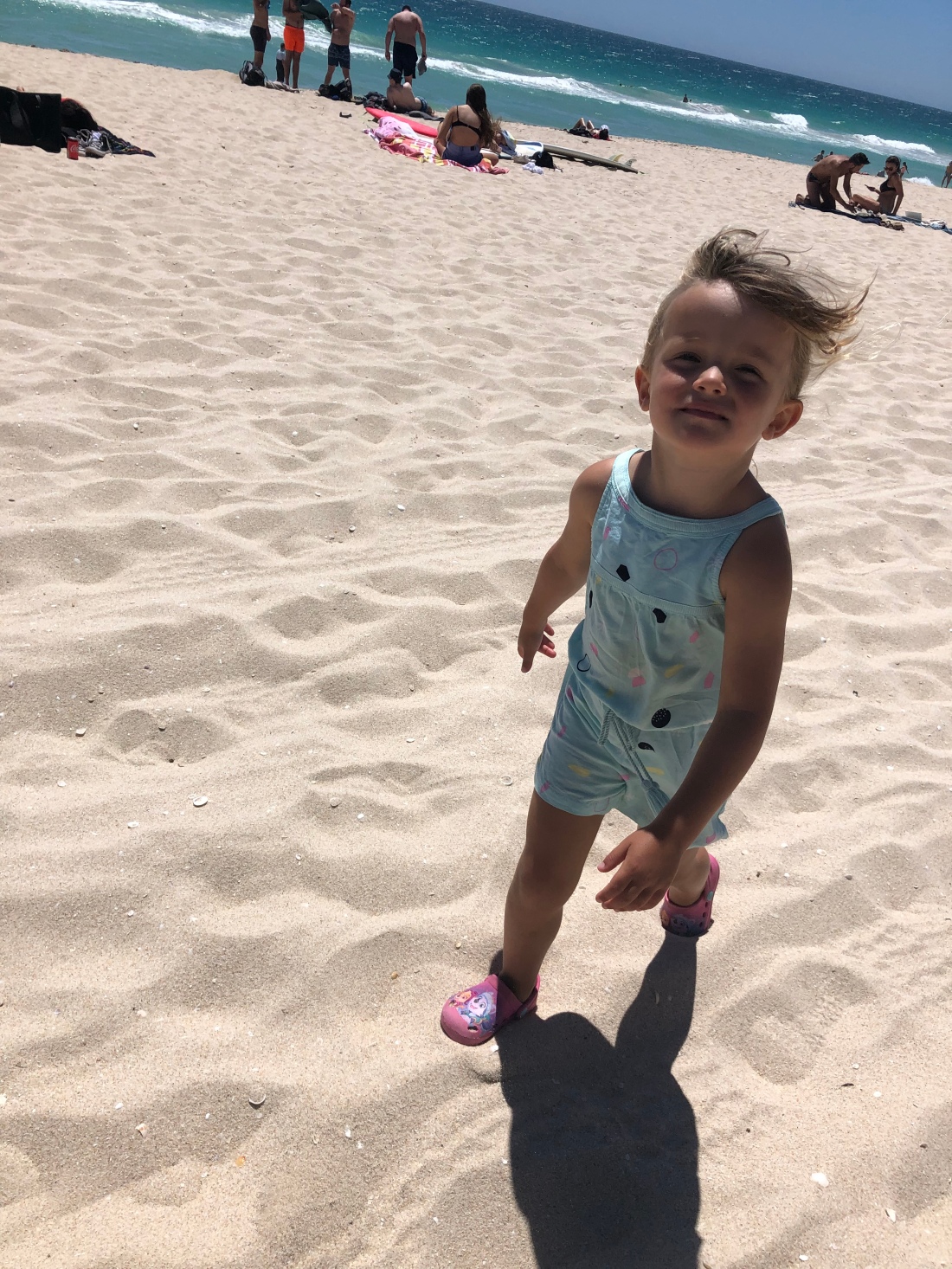 Cornelia started making sounds about whether or not she could have an ice cream (following this morning’s episode, I have now started referring to them as “nice creams”, instead…) and actually, it was a good way to get us all off the beach and homeward-bound.  We shook off the sand and crossed the road once more, this time venturing into the Rockery ice cream shop, where we joined a queue of people waiting patiently.  I was behind a dad and his two kids, and was just about to be served when a German/Aussie family barged past and placed their orders for five ice creams, complete with “mixers”.  (In this shop, you can order your base flavour ice cream then a mixer (such as M&Ms, or gummi bears) which is then mashed into your ice cream before being scooped into a cone or a cup.) I didn’t even have time to react, although the stunned father in front of me couldn’t quite believe it either.  As I have some German in me, I acknowledge the cultural differences in forming a queue, but I really had to bite my tongue!  Just as the server called “Who’s next,please?” I had to barge aside a second German/Aussie family and shout “Yes, that would be ME!” before Cornelia asked politely for her double chocolate ice cream in a cup with a spoon, please…

She ate it on a bench in the shade with Daddy, while I nipped to Cole’s for a couple of things I’d forgotten for our bolognese tonight, then we all walked home together.  It is just a few minutes away and we really do have the perfect location. 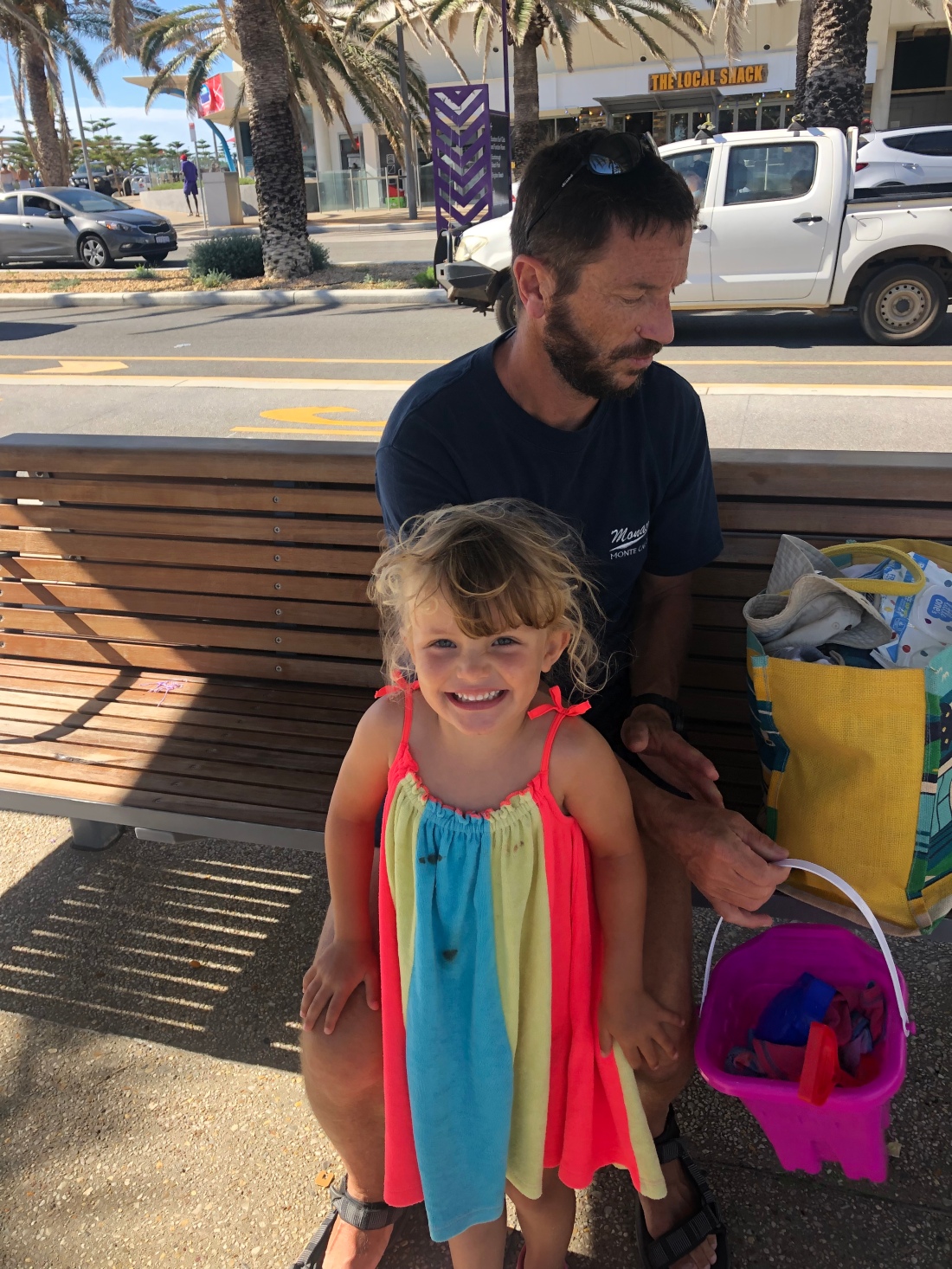 I made supper for Bugsy before heading out for my evening run.  I had a head wind on the way out, and a tail wind on the way back, which I suppose is just how you want it, but the head wind was really strong!  On my return, I stopped to take a few photos – it was such a beautiful run and I didn’t want to forget it. 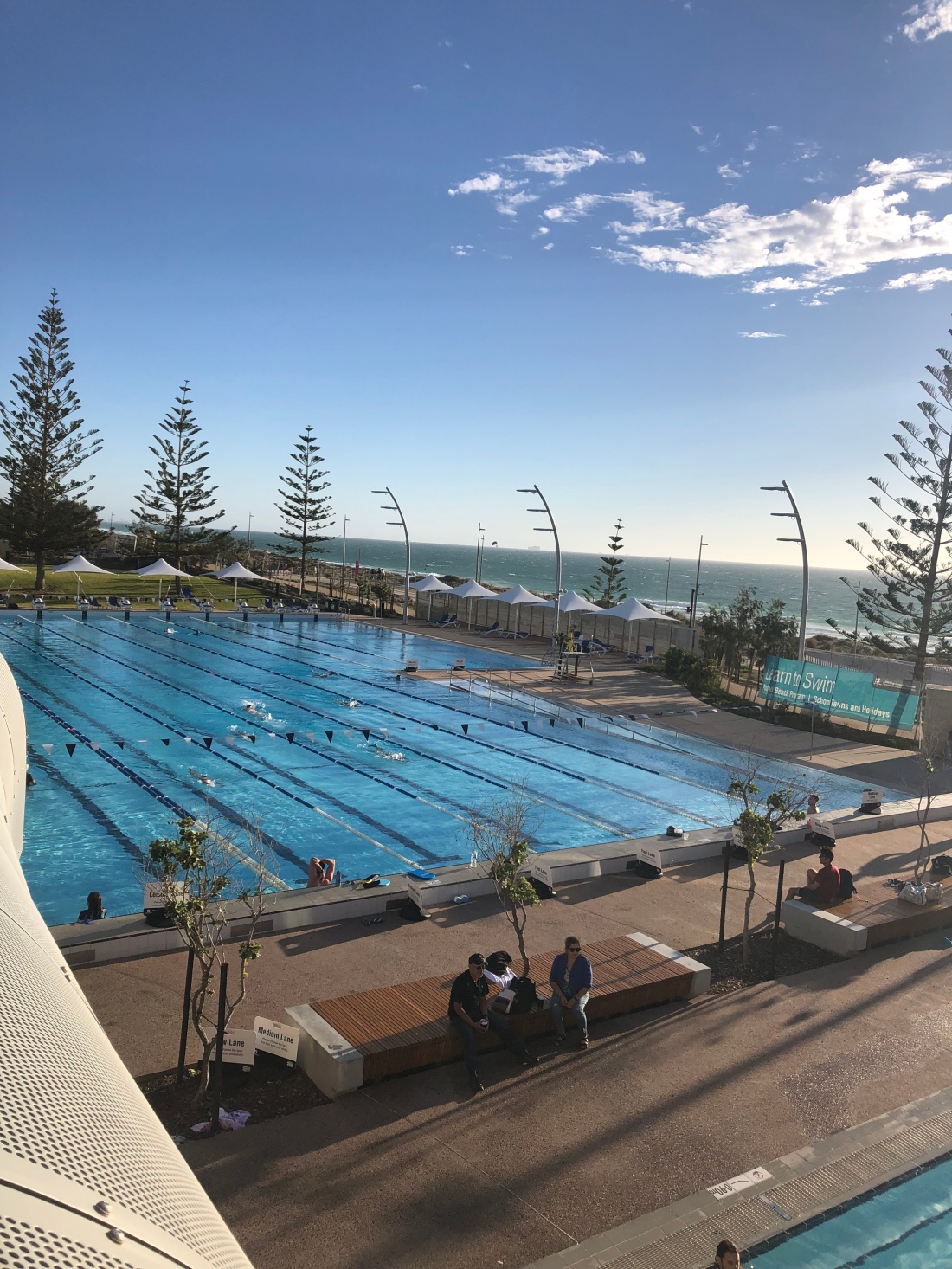 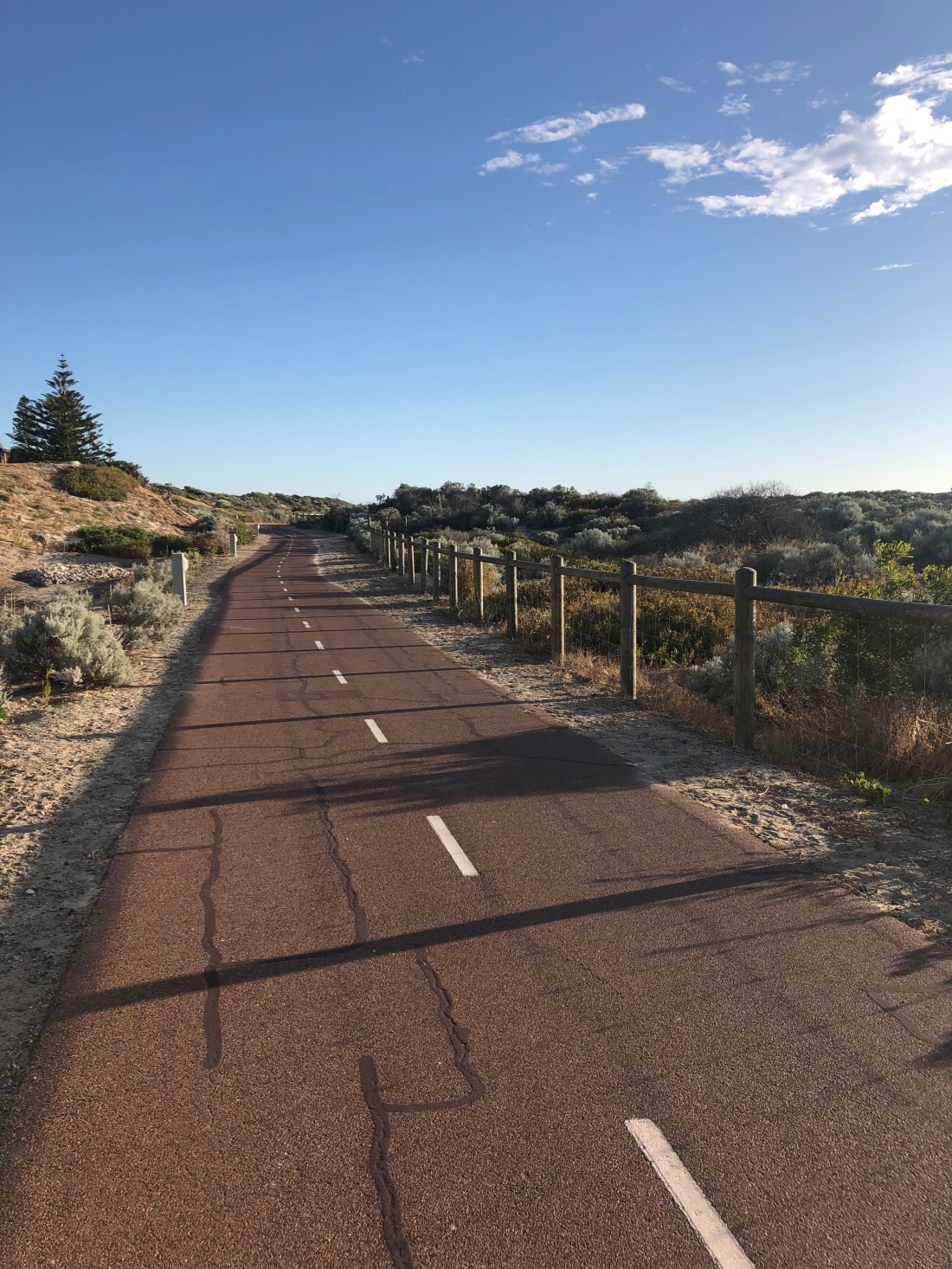 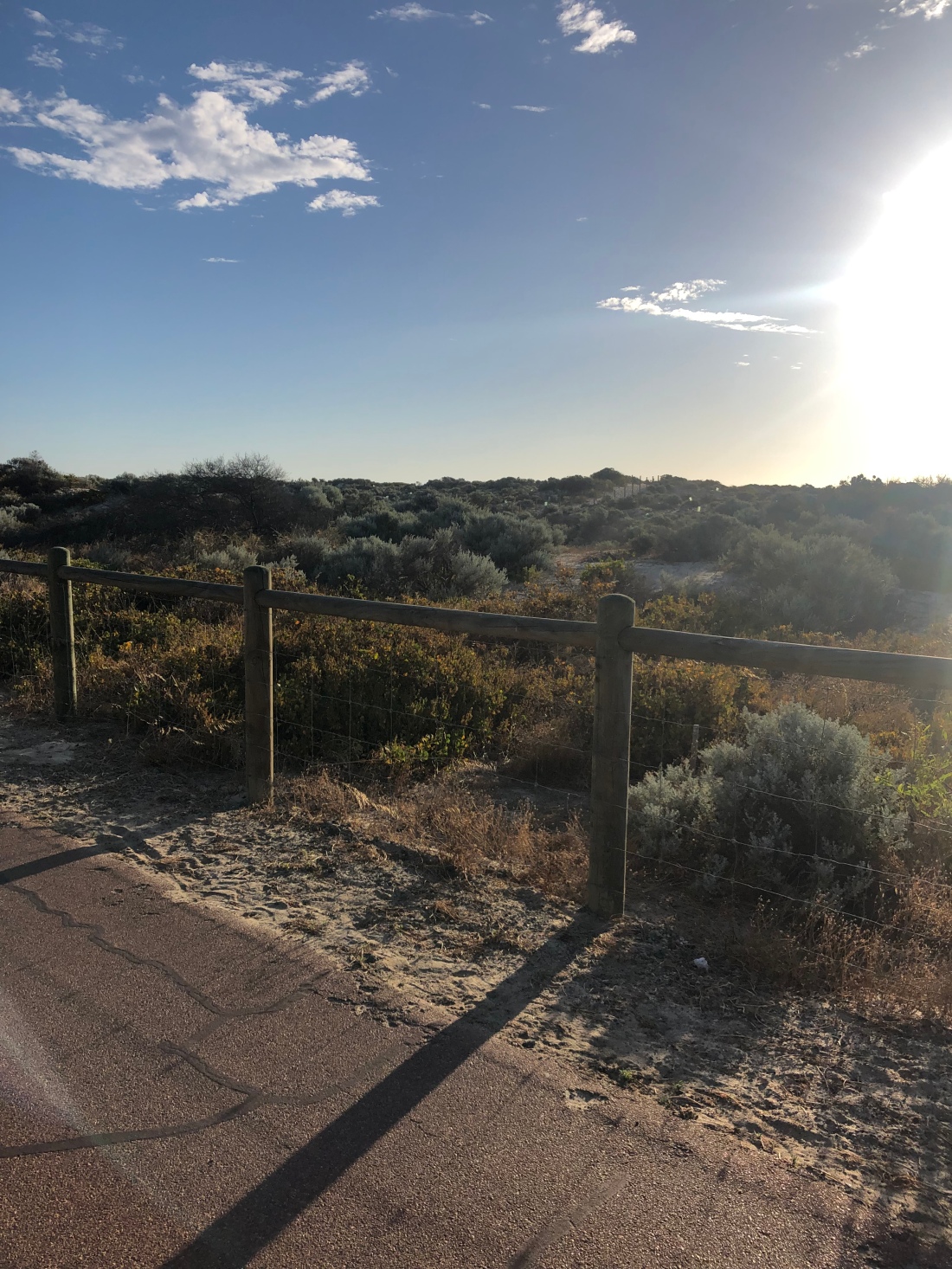 Cornelia was still eating her tea when I got back, but polished it all off eventually.  She was meant to go and brush her teeth, but insisted on playing a “win the towels” game, where she scooped up a towel and gave it to me, and won a bedtime story when she had completed three in a row.  She would’ve delayed bedtime for even longer, if I hadn’t reminded her of her 20:00 deadline for stories and bed.  With this reminder, she whizzed off to brush her teeth and settled down into bed.  I’d had a shower while she ate, so gave her a cuddle while Daddy read her stories, and she was asleep by 20:15.  Yippee!  We then ate our supper, before booking a cruise for tomorrow, and getting an early night.