With no worrying wee incidents, we all slept through peacefully until 08:00, and were at breakfast by 09:00. Again, our hostess in the breakfast room was so friendly! She adored Cornelia, who was busy telling her all about our next flight, and she was thoroughly charmed by our happy little girlie!

Although we had requested a late check out, in the end we asked to store our luggage in the hotel (which was free and in a locked room), so we could spend some more time exploring Darwin.  We have ended up really enjoying ourselves here, which comes as a complete surprise to us!  Having prepared ourselves for very wet, hot and humid weather, in a fairly dull city, our expectations were way off, and we have completely changed our minds about the city.  It has a sense of history about it but is quite modern and attractive, largely due to its complete rebuild following Cyclone Tracy.  The hot weather (and we were lucky to avoid the rains which would normally have arrived by this time of year) was bearable, especially near the sea where a breeze was blowing over us.

We walked down to the Waterfront again, this time via the Sky Tower.  Ian suggested I might want to stop off in the souvenir shop (the heat must’ve got to him) and buy an Australian Christmas decoration that was on display (yep, definitely the heat…!).  Anyway, it was a dangerous offer!  I ended up with an assortment of stickers and badges (for Bugsy’s scrapbook and rucksack) as well as a fridge magnet (or two) and the decoration that Ian had seen.  A not-at-all-tacky bag of goodies! 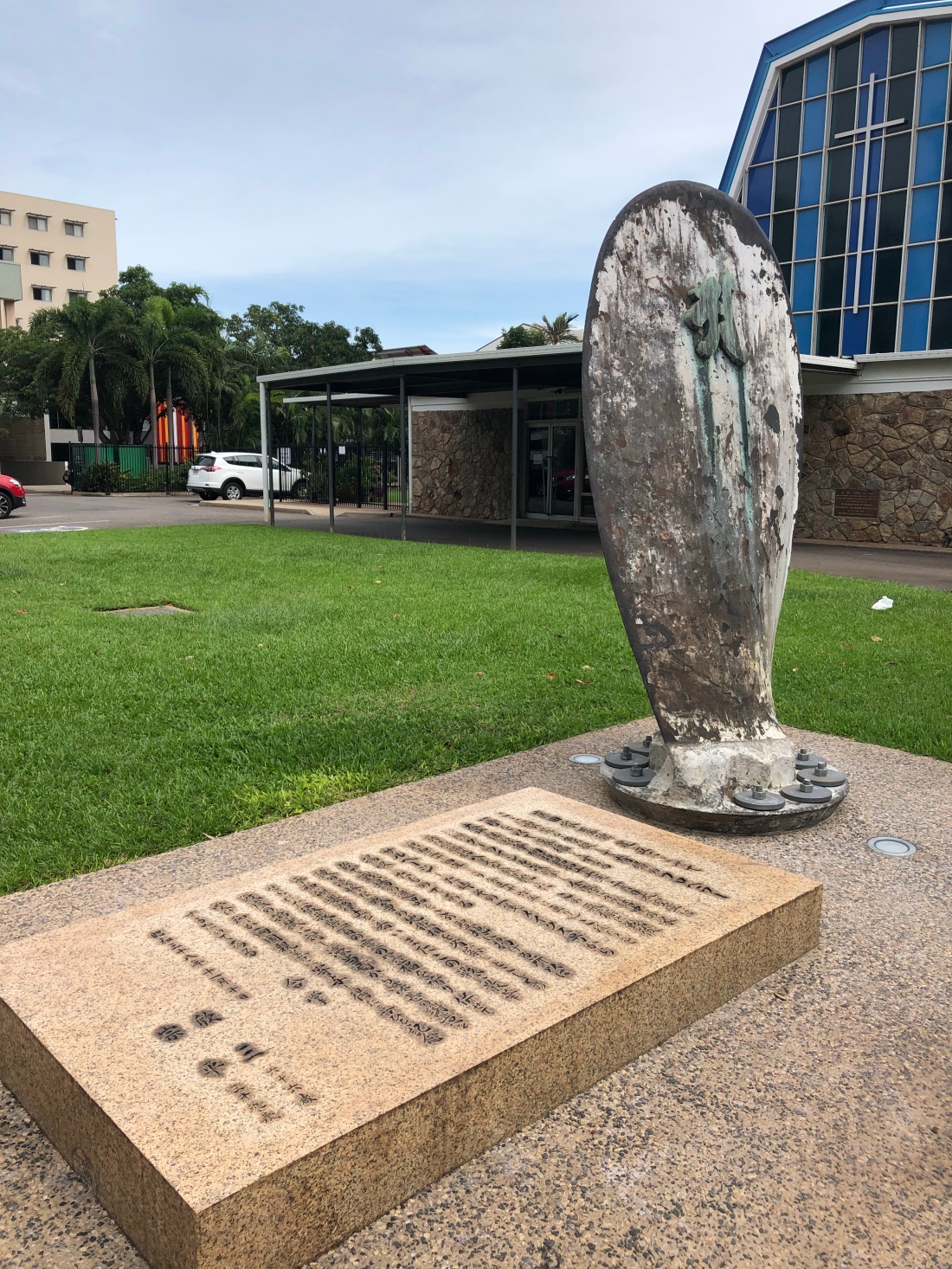 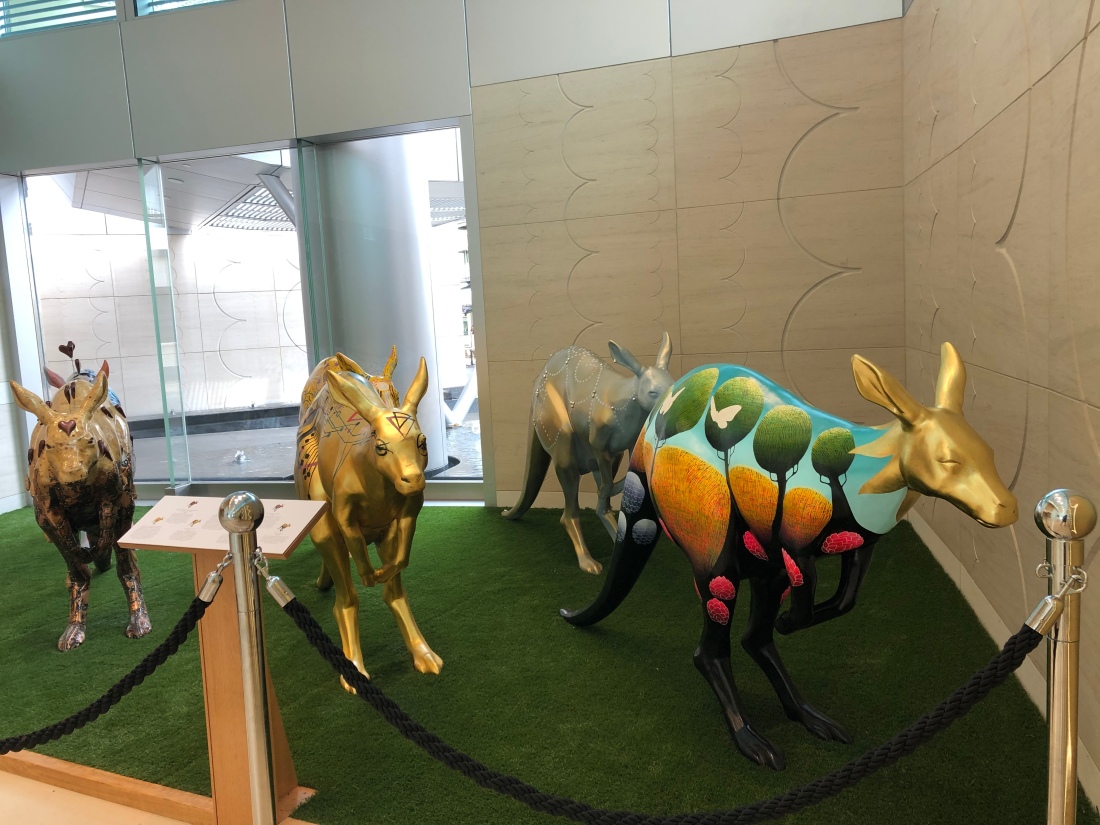 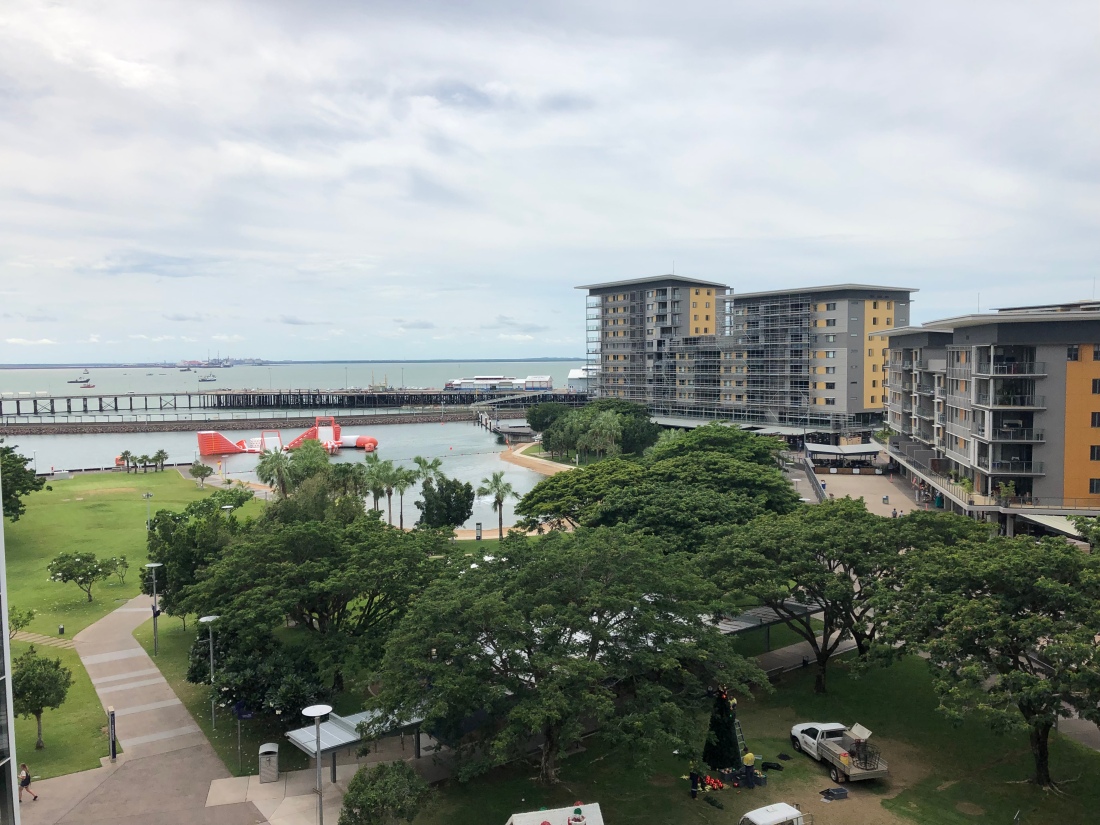 When I caught up with them at the Waterfront (on the same bench as yesterday), Cornelia was desperate to get into the water, so she changed into her swimsuit (which I’d been carried), and ran straight up to the other little girl who was already in the water, and asked if she could play with her.  (She said “Yes!”.  Hurrah!)  I suggested to Ian that he might like to go for a walk along the Wharf, which was meant to be spectacular, but he said he wanted to look around the shops (gasp!!) for a(nother) new t-shirt.  Yes, by now I was SURE the heat had broken him.

Apart from one minor incident when it appeared that Cornelia had snapped her new friend’s spade (I managed to fix it, so all was okay), the two of them played happily together, and separately for about an hour, until it was time for us to head off.  Cornelia was completely sandy, but we were on an afternoon flight, so there would be plenty of time to get her properly cleaned when we arrived at our AirBnB in Perth.  I dragged her under the shower by the Waterfront to get the worst of it off, and then we Ubered to the hotel, collected our bags and took another Uber to the airport. 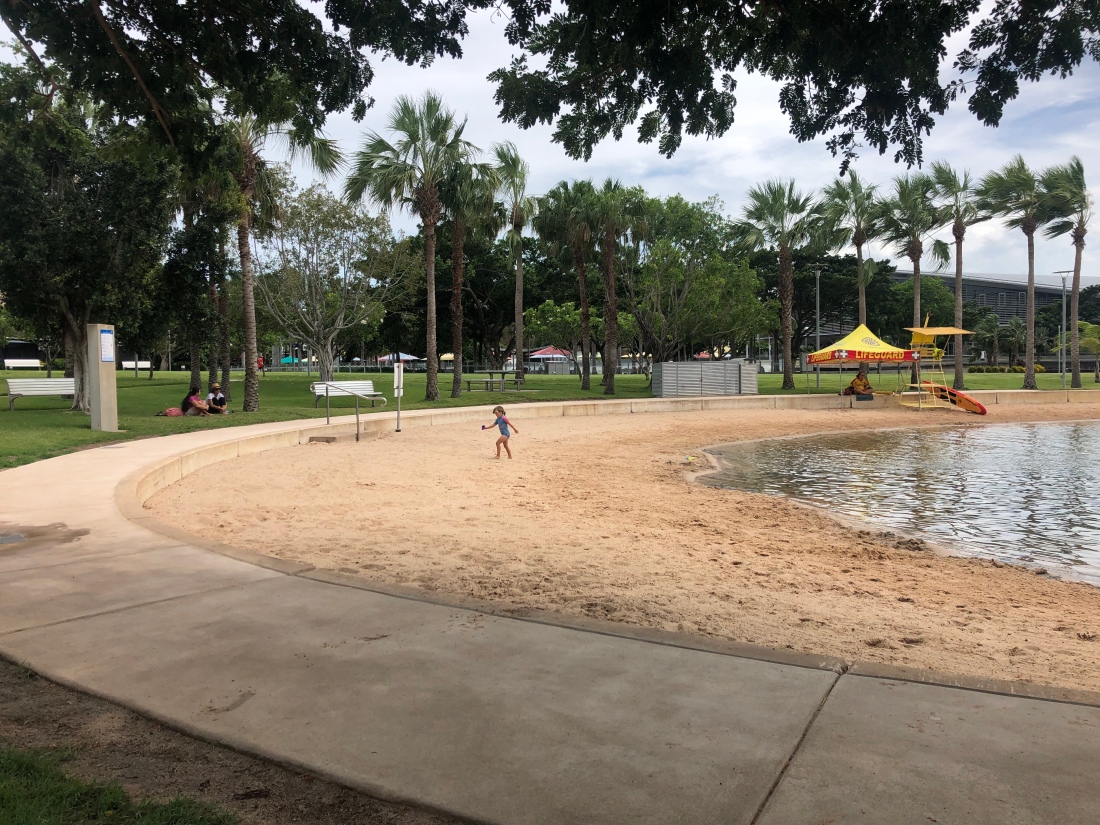 We had an easy check in with a friendly member of Qantas staff, David, who told me that all of his family had buggered off to London for Christmas and New Year, leaving him by himself.  I asked if he’d worked on Christmas Day – he had!  I reassured him that they’d all be completely freezing in London, so not to worry!!

Once we were through security, we found a cafe near the shops and Ian went to order milkshakes for all of us, before going to look at books. He returned empty handed, but mentioned that he’d nearly bought The Children Act.  So off I went and bought that, as well as the Bill Clinton/James Patterson novel “The President is Missing”.  I should mention the milkshakes in more detail.  Mine was the most unhealthy thing I’ve drunk on this whole world adventure!  A shot of espresso, milk, ice cream, chocolate, cream and honeycomb pieces.  I will also confess – I couldn’t finish it.  But at least that was my lunch sorted! 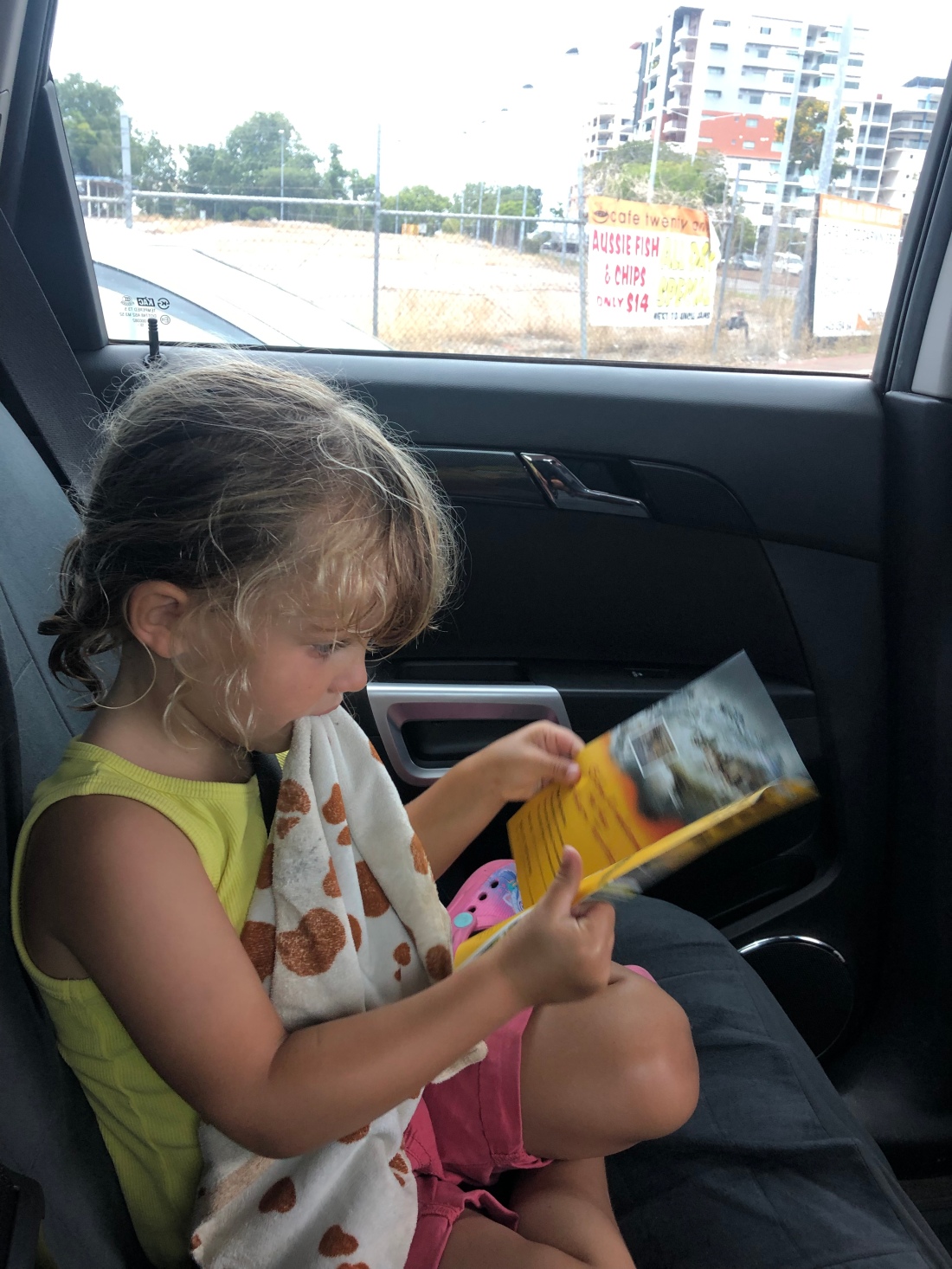 Cornelia’s reaction to her milkshake was predictable, as she turned momentarily into a vile child who’s eaten too much sugar.  Or in this case, who’s drunk too much sugar.  Thankfully, the mood didn’t last long, and soon she was singing her sugary way all the way down to the gate, where David checked us through again.

We had a nice enough flight, with a light meal (salmon & rice salad for me, beef & mushroom stew for Ian) but there was no entertainment on board.  Thankfully, Cornelia’s Kindle had some battery remaining on it, and she watched that until it ran out of charge, before doing some handwriting practice and stickers, while I read my book.  Uh oh, I was already completely absorbed by the book, and was mildly irritated when we landed and I had to pack it away!!

The luggage took ages to arrive on the carousel, and in fact, Ian went off to collect our hire car while we were waiting, and I had only just made it out of the terminal when I spotted him on his way back.  Then, I didn’t sense-check our Google Maps directions and ended up at a different 41 Scarborough Beach Road (maybe 441 Scarborough Beach Road??!!!), when Cornelia suddenly announced that she needed a poo. By the time we arrived at our correct apartment, she thought she might have done one in her pants, but a quick check revealed that all was well.  Thank goodness!  That wouldn’t have been on the top of my list of ways to start our trip to Perth!

While Ian and Cornelia familiarised themselves with the apartment (i.e. found the kettle), I went to the nearby Coles for some supper, milk and breakfast stuff.  The supermarket is just near the beach, and the seafront looks amazing.  I can’t wait to see it properly tomorrow.

By the time I got back, Ian was getting cross with Cornelia because she’d asked to wash her hands before she got in the shower, and he’d said no.  I have no idea why he’d said no, and that’s always a difficult one to try and resolve!  She was getting upset, he was getting cross – and if she’d just been allowed to spend ten seconds washing her hands, none of this would’ve happened!  Like I’ve said before, with a four year old, you really need to pick your battles…!

While they showered, I prepared a chicken salad for me and Ian.  Cornelia had already eaten her tea, so she had a bedtime story, then went straight to sleep just after 20:00.  After we’d eaten, I sat on sofa with a beer and read the rest of my book.  The entire thing in one day.  It’s been far too long since a good book and I had a date!  Ian had gone to bed long before I did, and I knew I’d be tired in the morning, but I find it so hard to stop reading when I’m committed!