We all slept incredibly well, and were very lazy getting out of bed this morning.  In fact, the only reason that we leapt up at 09:45 was when the doorbell rang and I suddenly remembered that Michelle (the owner of the property) had emailed me to ask if it was okay if her pool man visited to check and clean the pool.  I had completely forgotten to pass this on to Ian, who managed to improvise the whole conversation perfectly!  The doorstep exchange had also woken Bugsy, but instead of getting out of bed, she asked Daddy if he could read to her, while I hung up the laundry from yesterday and put on another load.

And there ended the pleasantries for the day.  Breakfast was tiresome.  Cornelia had asked if she could watch some TV while Daddy prepared breakfast and was very upset to be told “No”.  She came in search of me to tell me what had happened, and to ask me if she could watch TV.  Of course, I said “No” too.  And that if Daddy had said no, then that was the answer.  And so began a good couple of hours of tears, yelling and misery!  Sigh… this was NOT how we had expected to spend our morning.  During the course of this misery, she lost her Kindle for the day and her ice cream, as well as having lost her TV already.

Eventually, I put her on a chair and told her to stay there for four minutes, quietly.  She asked if I would charge her Kindle (this was another thing that she had lost – the opportunity to have her Kindle charged today, so that it would be ready for her in the morning tomorrow), and was very upset when I repeated that it was not going to be charged.  But I have also been trying to teach her the art of negotiation, and she said “If I can come up with a good reason for you to change your mind, will you?”  I am more than happy to compromise with her, if she can give me a good reason for something, so I left her there and said to call me when she had one.  It took twenty minutes.

“I’ve thought of a good reason to charge my Kindle today, Mummy. If you charge it, then you can look at the new Frozen games [that I’d downloaded for her, before she’d blown up] and work out how to play them, so you can show me tomorrow when I get my Kindle back.”   Bloody hell, even I hadn’t thought about that!  And it was a brilliant reason, so I agreed that I would plug her Kindle back in ready for me to check out the new games for tomorrow.

She was all smiles again then, as we set off for the beach together.  We were going to go for a long walk first, but she was very keen to get to the sand and sea, and it was very hot again.  We knew the short walk would take her a very long time and we’d probably all end up hot and bothered, so I took her to the beach, and Ian went on the walk by himself, hoping to stretch out his still-troublesome knee and ankle.

Cornelia and I set up camp near the lifeguards and in between the red & yellow swimming flags.  I changed into my bikini and helped Bugsy into her little sun suit, and she was straight down to the water!  We had brilliant fun, as always, bodysurfing, jumping waves and making sandcastles.  She also made a recipe she’d seen on TV yesterday (“I can cook” on CBeebies!) and dug holes in the sand by twisting her foot, then becoming annoyed with the waves when they washed over them making them disappear!  She even tried covering the hole with her hand at one point, in the hope that this would protect it! We were working on our excellent castle and moat when Daddy arrived.  He was dragged straight down to the sea and played with her for a while, before coming up for snacks.  Due to our late breakfast, I’d decided there was no need for us to bother with lunch, and we would have oat bars, grapes and crisps instead.  Definitely Cornelia’s favourite kind of lunch! 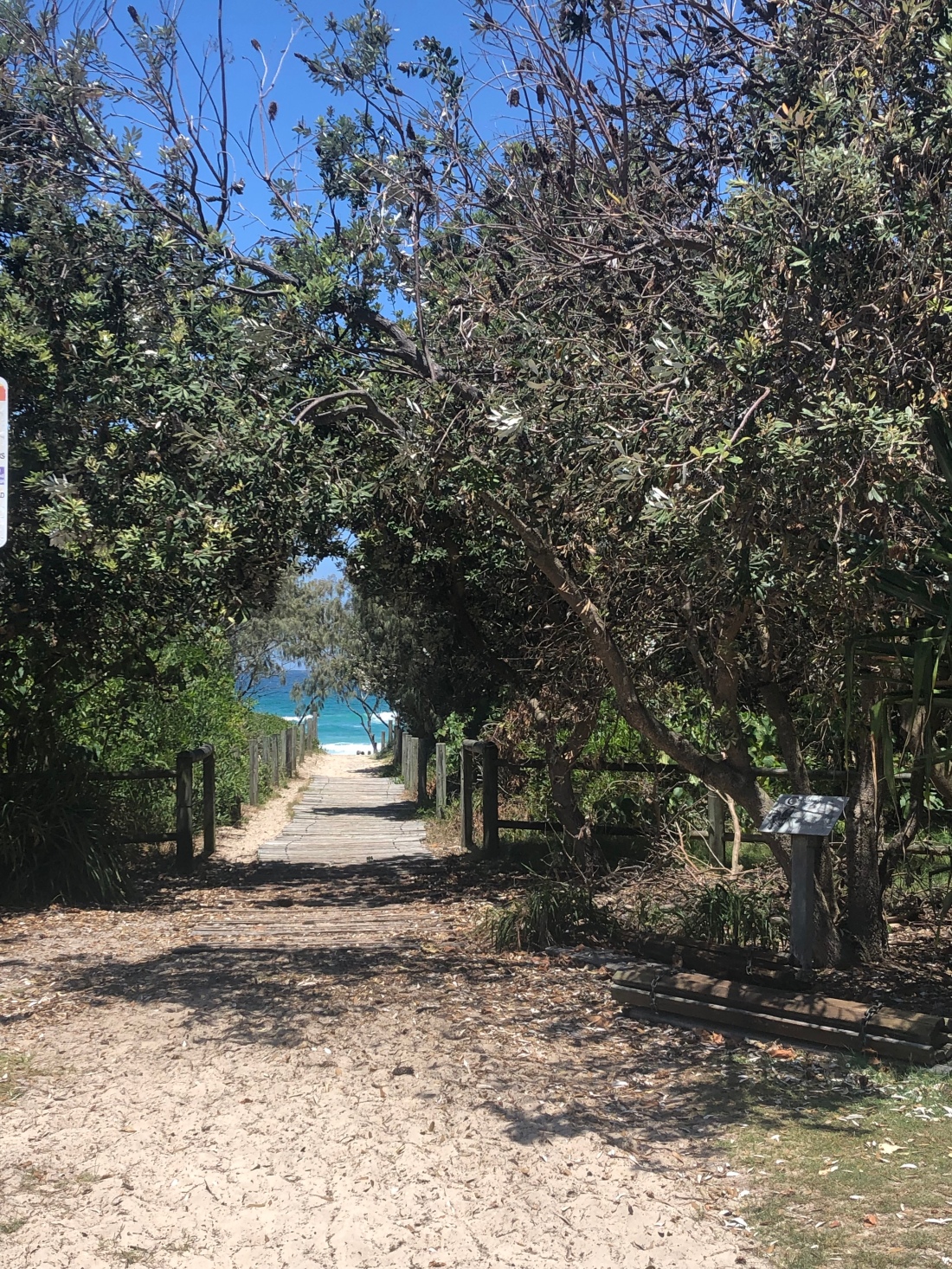 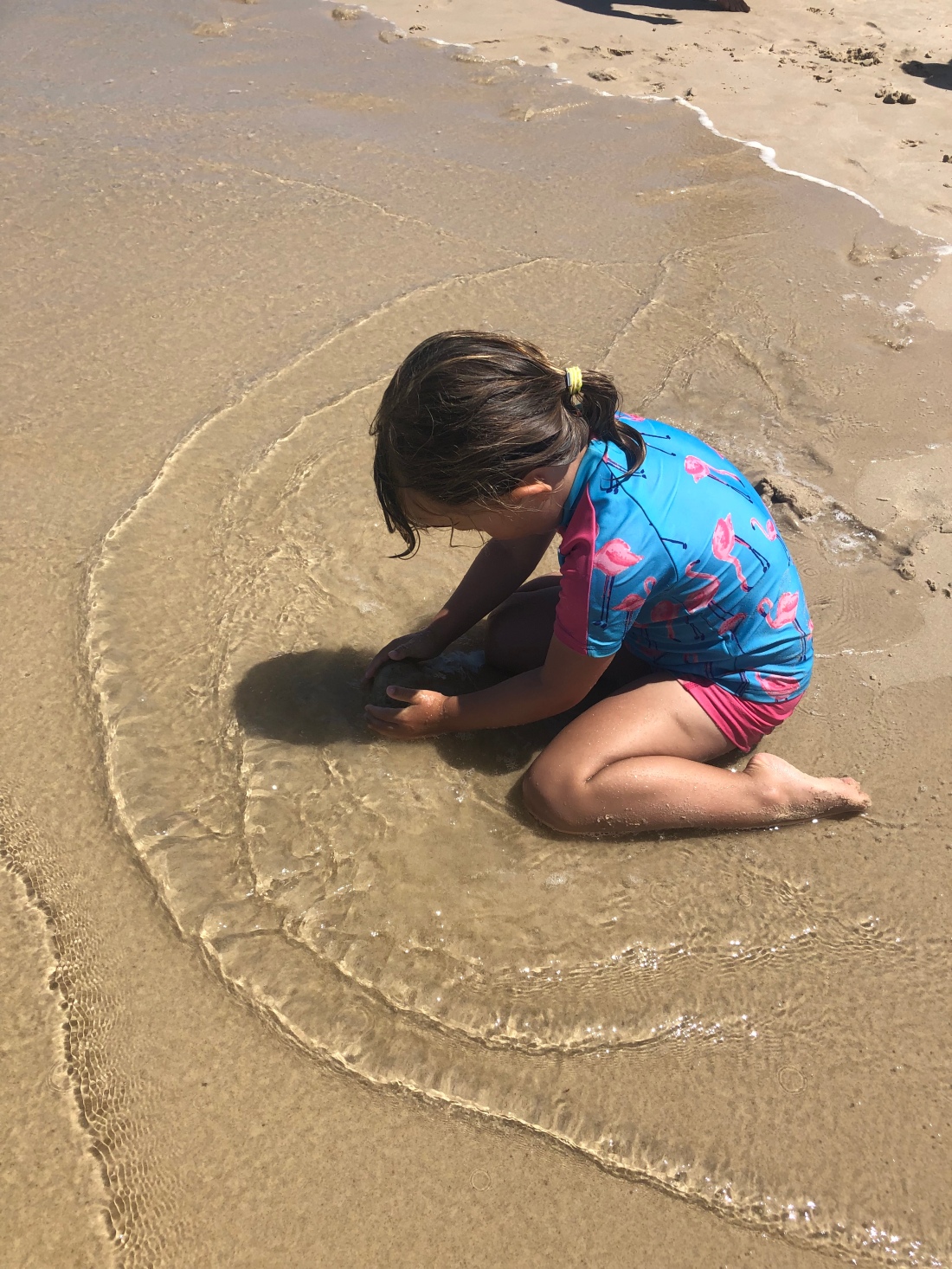 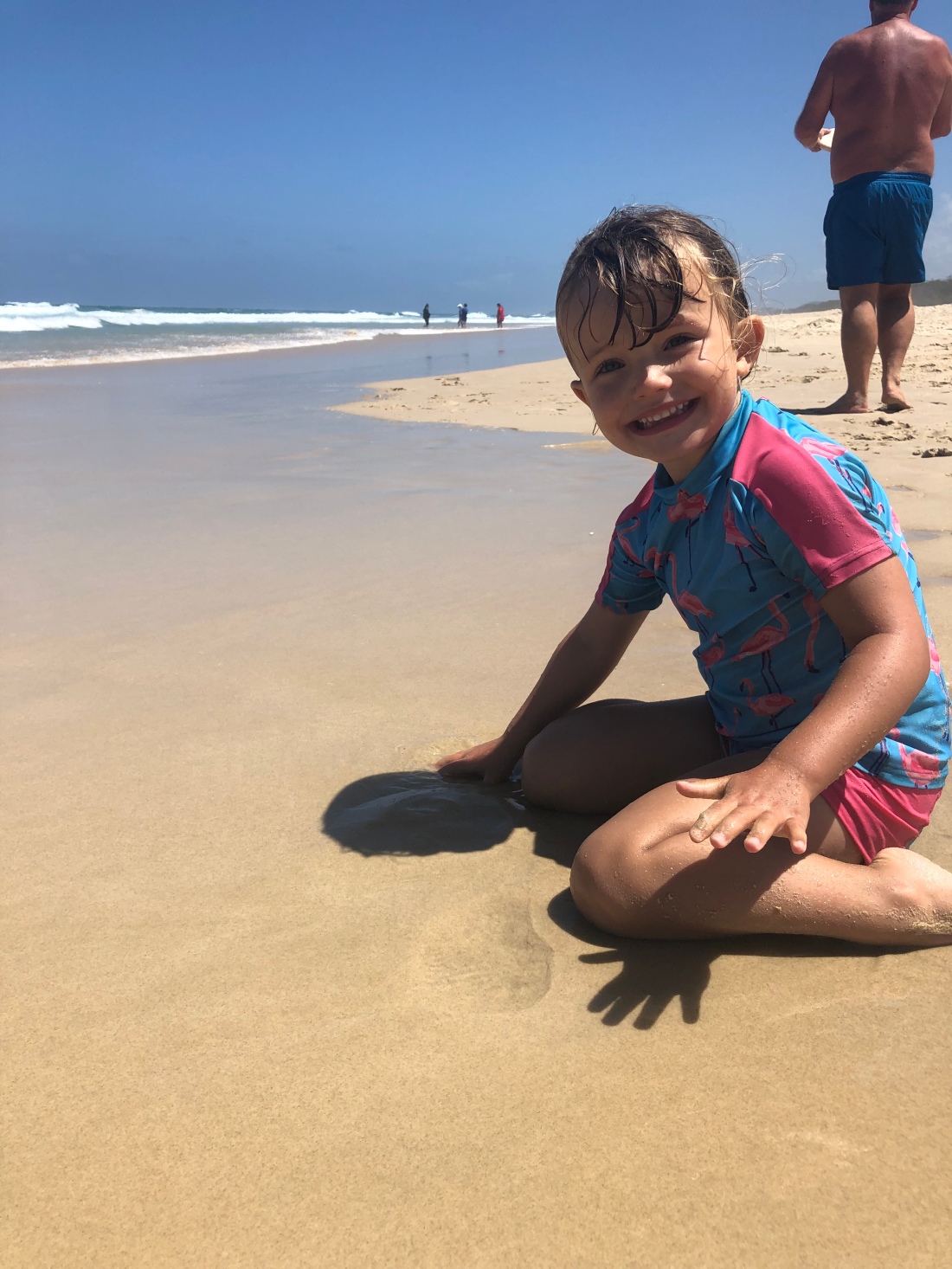 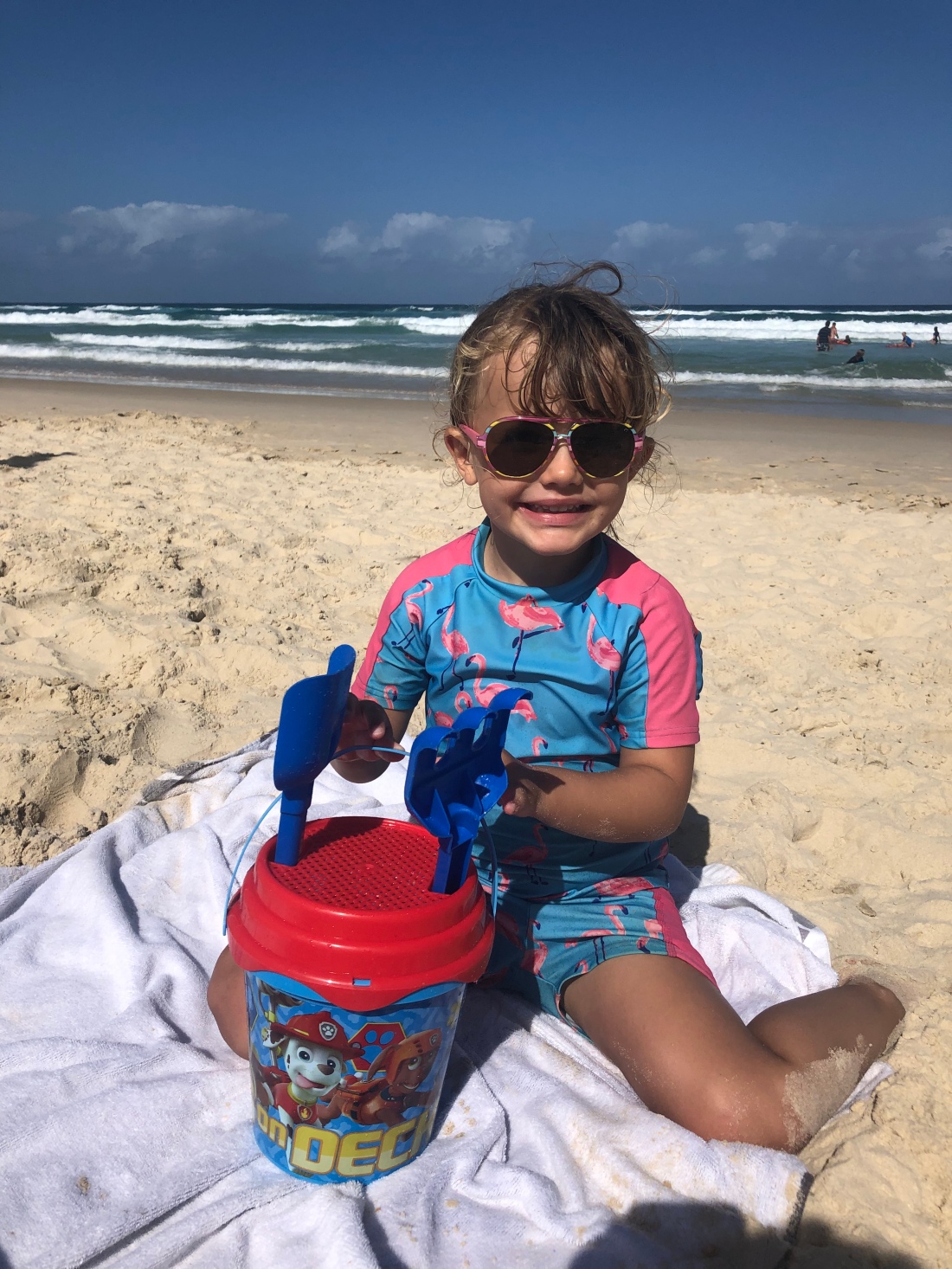 We left the beach and whizzed home for a quick shower and a cup of tea.  Cornelia opened up her new box of “Green Lego” and built all three items all by herself, with only one small blip (the small tyres on the back instead of the front of her tractor).  She is better at putting it together than I am, I think!  (Mind you, that’s a pretty low bar!) 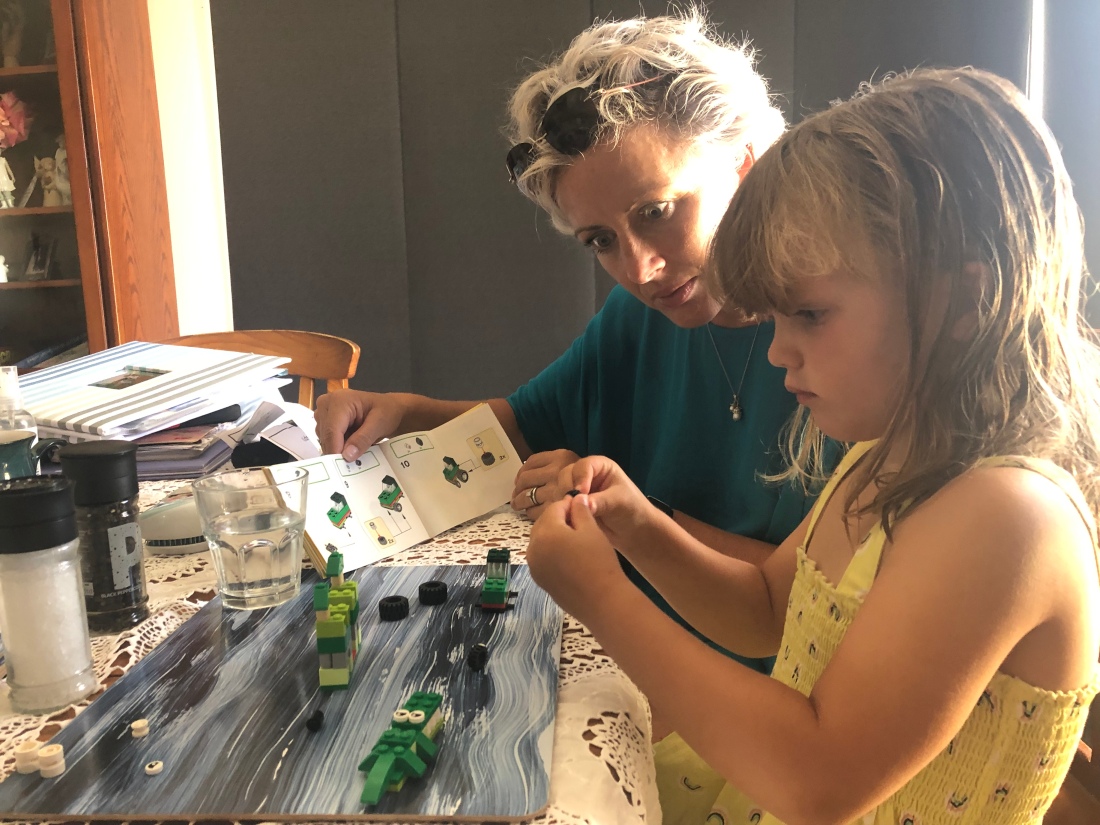 Once we’d had our tea, Ian took Cornelia off to the park to see if Lavina was there, while I nipped to Woolworths for supper.  I had been hoping to have a bit of a nosy around the shops in Kingscliff shopping centre, but everywhere was closed by this time (17:30).  So, I enjoyed a cruise around the supermarket instead, finding everything I need and a few things I didn’t!  I stopped off at the playground on the way back, but Cornelia said she was happy to walk home, if she could have a few more minutes at the park, which was fine by me.

I went home to the luxury of silence, and prepared our pasta bake dishing up Cornelia’s just as they arrived home.  Daddy supervised supper while I went out for my run, which was shortened by the setting of the sun.  The street lighting is pretty poor and there were very few pavements on which to run, so I decided not to risk it and headed home instead.  Cornelia was already in bed and having a story, so I kissed her goodnight and said I was going to finish supper for me & Daddy now. 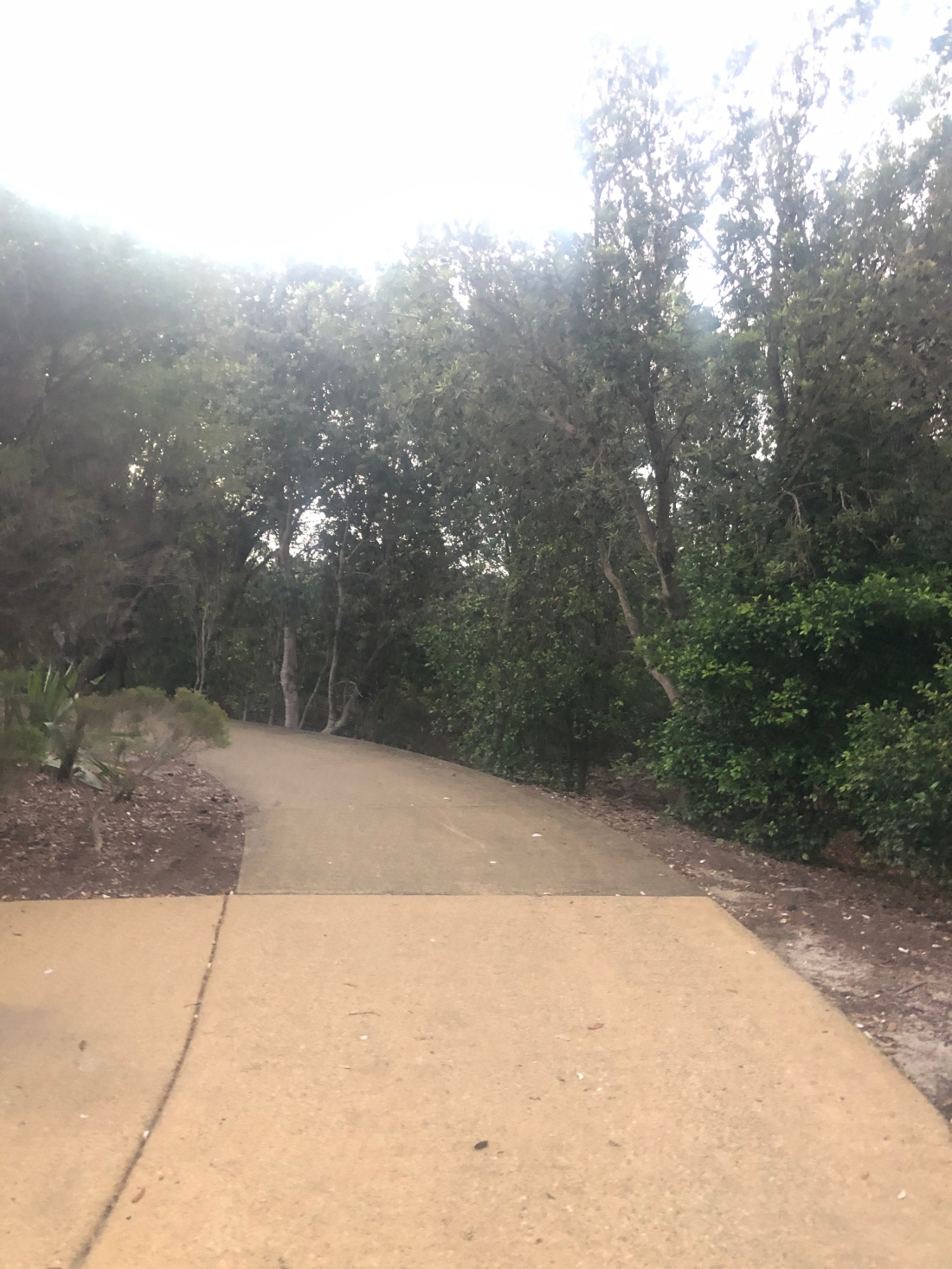 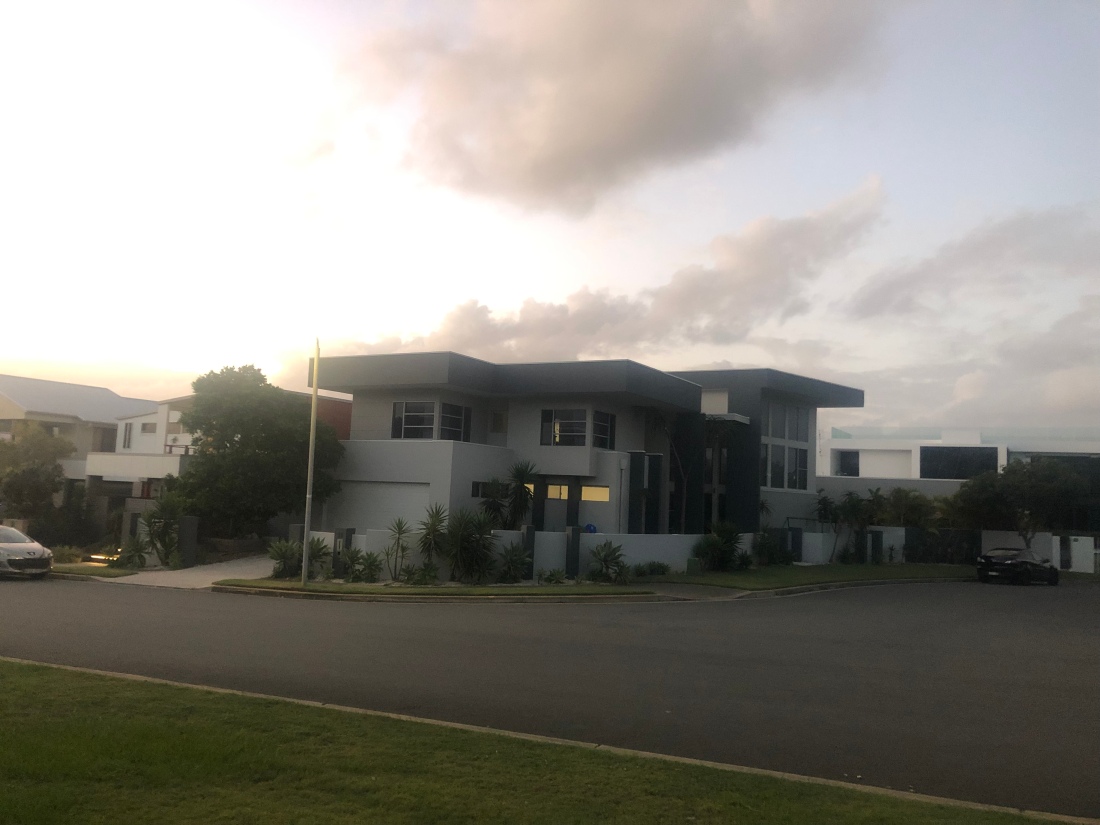 Apart from calling out for me a couple of times (she wanted her door opened), she left us to eat our meal in peace, and then I sat down to the mammoth task of updating the blog, now that we have wifi! And I’m not remotely tipsy!! 🥴😂