Cornelia, bless her, had a bit of a miserable start to the day. She woke up with me in her bed, having called out for me again last night. I just wanted to sleep, so stayed in her bed (at least it’s a double here!) until she woke up and clambered in top of me for a cuddle. She seemed very happy that I was still there: “You stayed here all night!!” but then her melancholic mood set in. She cried at breakfast because she wanted to win the food race with me, but she ate too slowly, so Ian and I finished before her. She completely refused to understand the concept of having to work hard to win something – you don’t just get it because you want it! And she wasn’t allowed to bring Moo with her today, just Cowbat, because I said Moo was too big to ferry around in our bag which was already crammed full. So, she made up this whole sorry story about how Moo had told her how sad he was to miss the swimming pool today, and that he just wanted to spend the day with Cowbat and how he would be so sad all day. And she told me all of this is great big sobs, unable to stop crying about something COMPLETELY MADE UP!

Thankfully, the tears had stopped by the time we met Val and Belle at the station. Finding our train was easy enough as today all trains were leaving from platforms 3 or 4, and we just had a short wait before it arrived. The girls were thrilled to be seeing each other again, and chatted and shrieked and played the whole train ride to Southbank, from where we had a short walk to the most wonderful place. A large outdoor pool, with a sandy beach and pool next to it, and a third watery play area. And it’s all free! I figured it would be packed, but whilst it was a bit busy, it was by no means full and there was plenty of room for us and the girls to mess around. Both Bugsy and Belle wanted to be in the main pool area, so we found ourselves a little spot in the shade and changed. We all went in the water together and must’ve been in for about an hour! 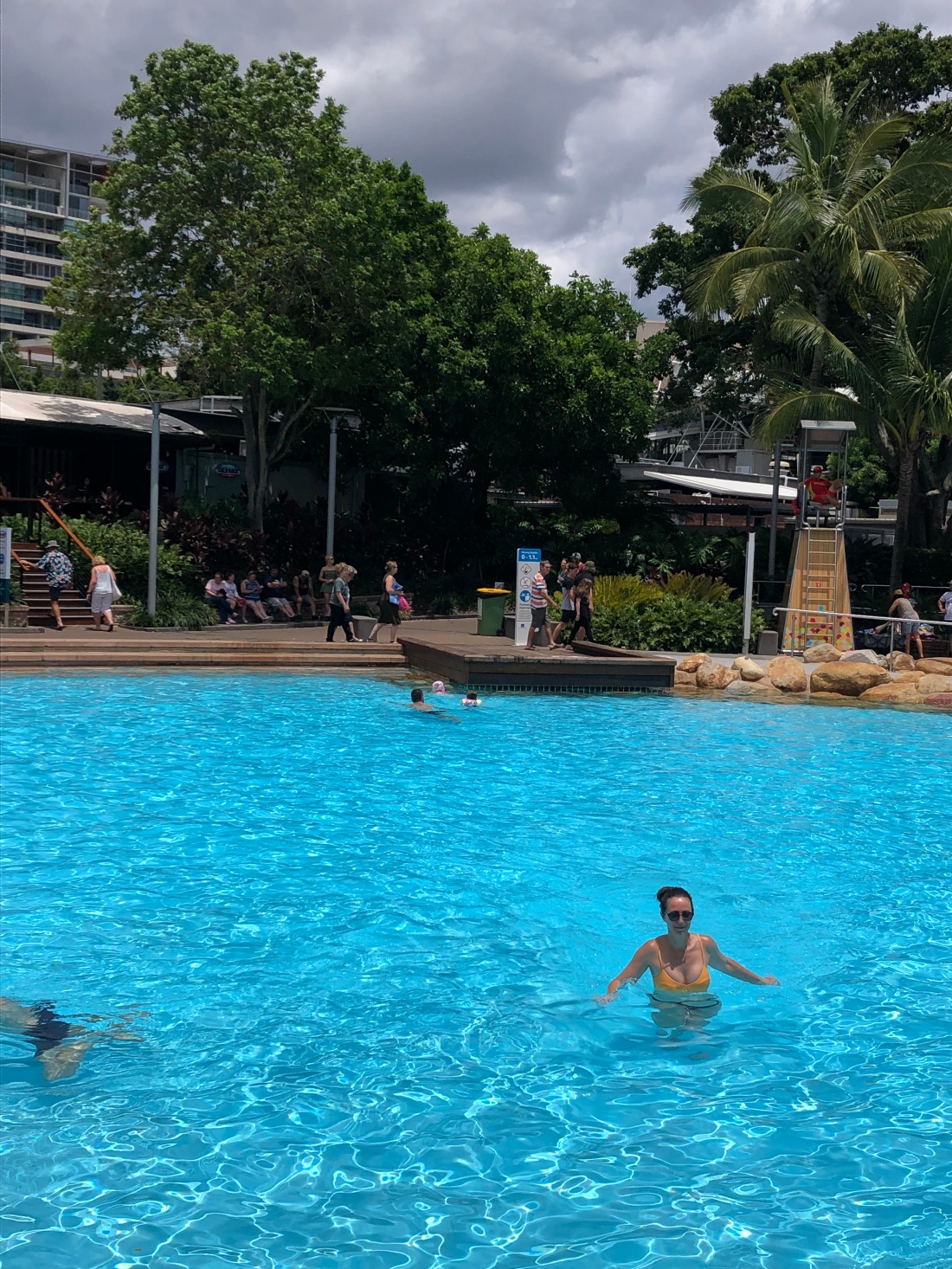 Val had brought a spare flotation vest in case Cornelia needed it, and she wanted to have a play in it, before realising (while she was in the water) that she could use it for all sorts of other things – like tying us up, or as a floating table for Belle’s sunhat – and she took it off fairly quickly, which then encouraged Belle to have a go without hers. She borrowed Cornelia’s goggles (she normally refuses to wear them, but her eyes were stinging a bit) and did some brilliant swimming from me to Val and back again! She is another very confident little girl in the water and is definitely ready to learn how to swim without her aids. The girls were both good as gold, and we all had loads of fun.

Ian got our first, then we were all getting just a bit nippy so agreed it was time for all of us to get dressed and find some lunch. Amazingly the girls got out and were dressed with no argument whatsoever!

Before we made it to lunch, Cornelia had run off to the playground next to the pools, with Belle and Ian in hot pursuit. We spend another half an hour there, watching the kids climb the ropes while we prayed they wouldn’t fall! It gave me and Val a good opportunity to carry on catching up with the last ten or so years of our lives. Our friendship feels as strong as it was all those years ago – the measure of true friendship. 🥰 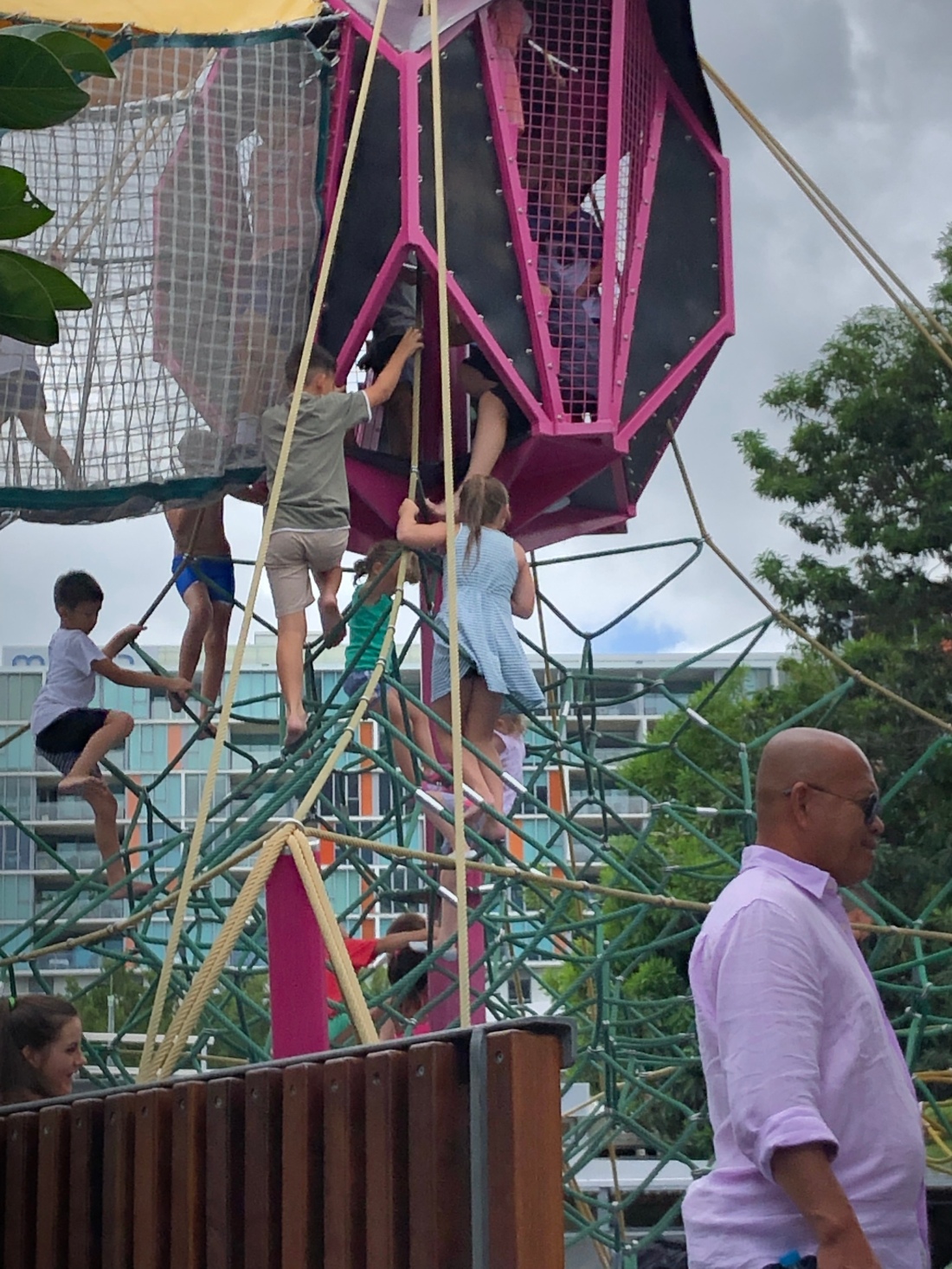 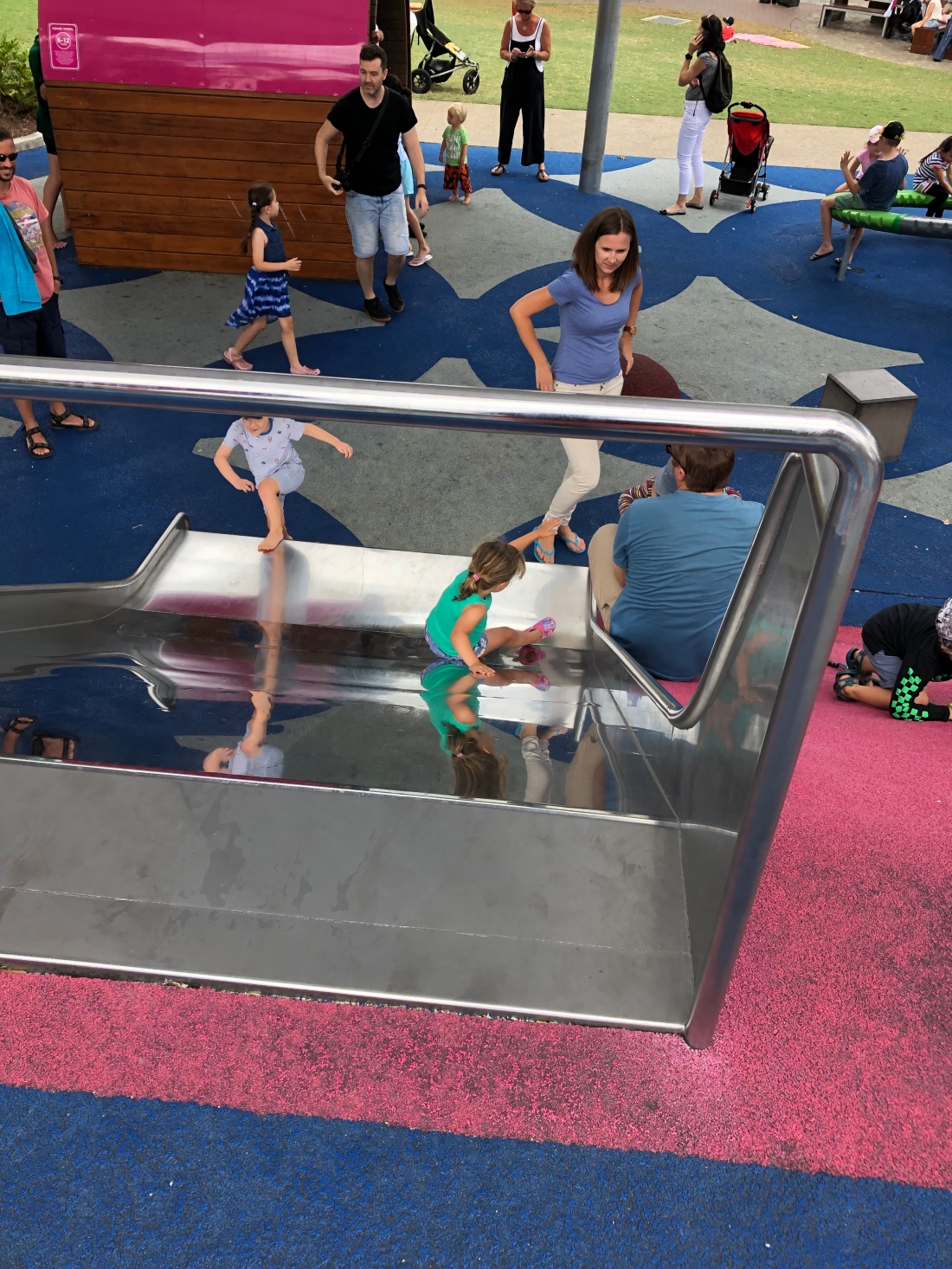 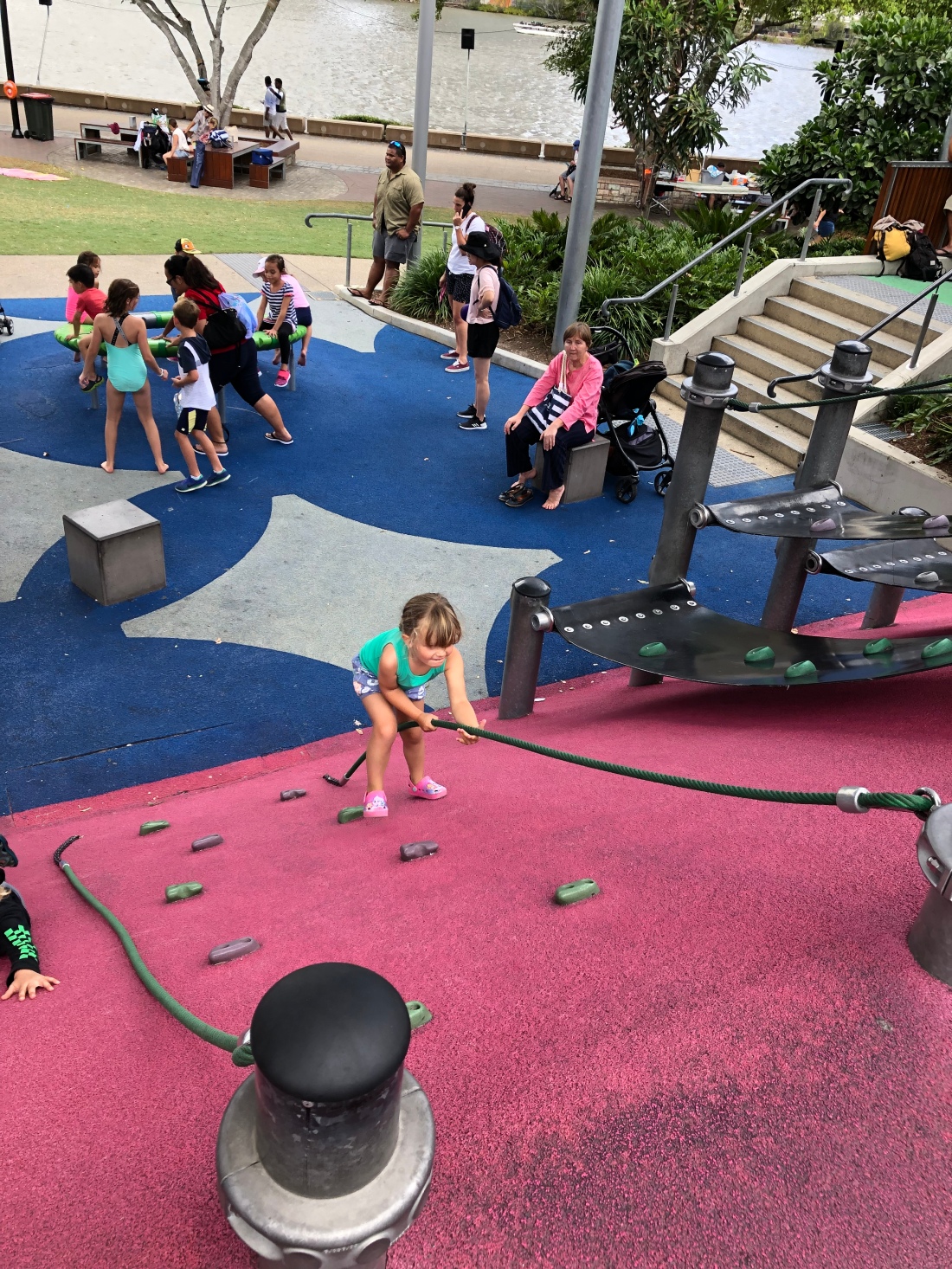 Val had suggested a nearby Mexican restaurant for lunch – what an excellent choice! Although Cornelia was able to stick to the safety of her fish and chips (🙄), I had chicken fajitas which were terrific, and we all shared (well, the grown ups shared) a jug of sangria. I haven’t had a lunchtime drink for a long time, that I can remember! Belle and Cornelia day next to each other, and after they’d eaten were allowed a bit of screen time while we finished our drinks. They ended up swapping phones, so each had something different to look at, but I don’t think mine is quite as much fun as Val’s and Belle was keen to swap back after a while! And Cornelia was not keen. 😂

I still had a couple of Christmas cards to get (for Ian) and I was fairly sure he didn’t yet have mine (correct, as it later transpired), so with the promise of a chocolate ice cream in the mall, we took the train to Toombul Shopping Centre, and while Val and I went off to look for “stuff”, Ian was tasked with feeding the girls ice cream.

We found a stationery store and I could’ve stayed in there for hours browsing all the lovely books and housey things they were selling. But time was ticking away, and both Val and I had separate plans from about 16:00, so I chose the cards and bought a couple of last-minute gifts for the girls before we returned to find Ian completely in control, with the girls just finishing their treat! Honestly, we should leave him alone with them more often…! 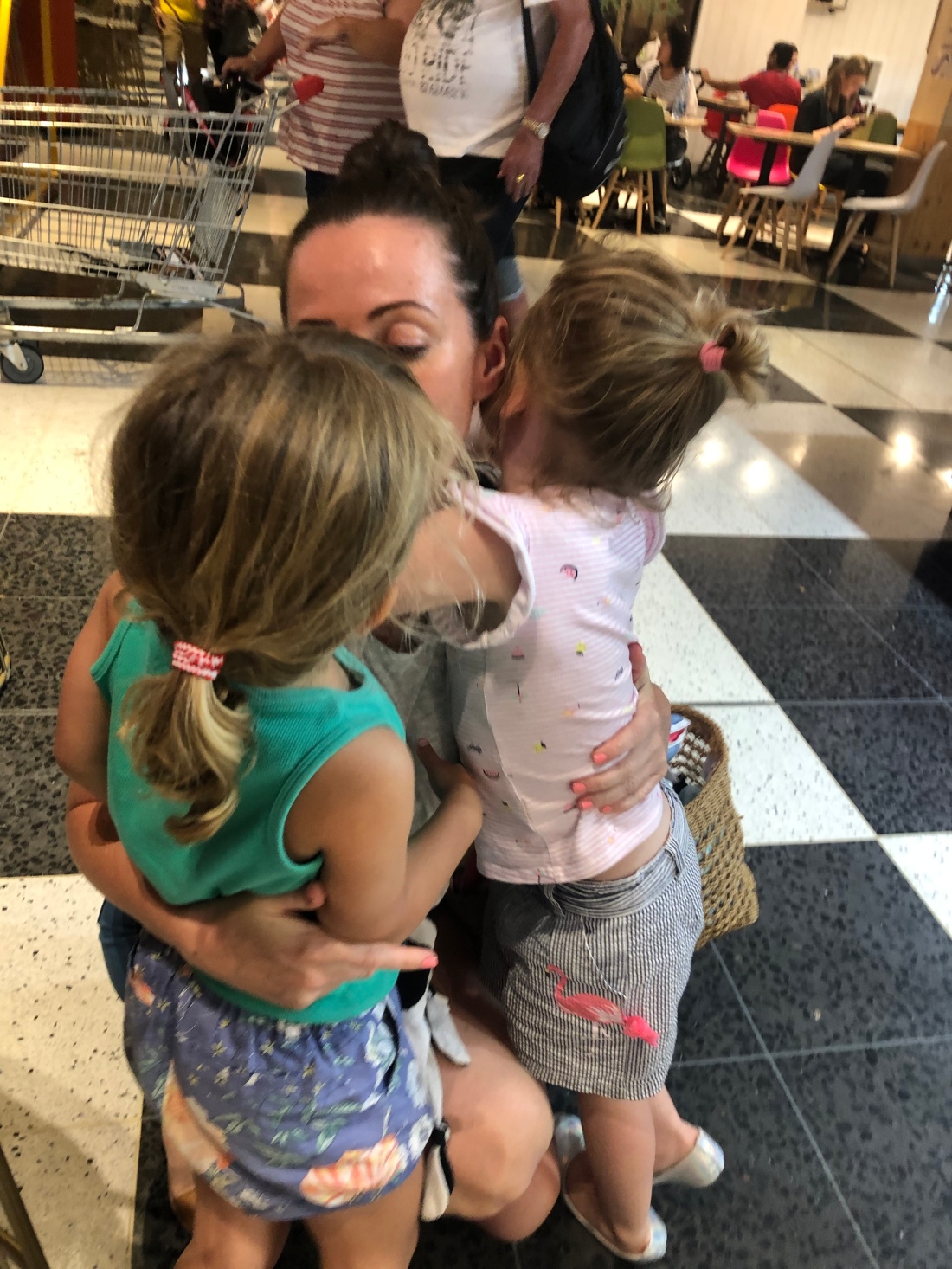 It was time to say goodbye to Belle and Val, and we whizzed home and went straight back out again in our car, to meet Rochelle and the rest of the family at their hotel by Brisbane Airport.

We went up to the 4th floor to be greeted with hugs from the kids who were waiting us there 🥰, and when we went into their hotel room, Carl had beer for Ian and a bottled pink fizz in his hands for me and Rochelle! Yippee! Bless him, he had also booked supper for 18:30 in the hotel restaurant, so we hung out in the room for a while, playing eye spy, and hilarious games of Simon Says and Hide & Seek, until it was clear that everyone needed to get outside to burn off their remaining energy – probably to the relief of the neighbouring rooms!!

There was quite a good walkway in between the various airport hotels, which led to an outdoor play area, where the kids chased each other around for half an hour or so. Cornelia and Zara had a cousins’ fight. Bugsy (to my horror!) had shoved Zara, so Zara had pushed her back, and Cornelia had fallen and banged her ear. It was hard to feel too much sympathy for her, but she was very sad about it all, mostly because she loves Zara so much and was upset with herself about alienating her! Anyway, Cornelia went over to apologise but then became more distraught because Zara wasn’t ready to apologise to her. Oh dear! Largely, I try not to interfere and Rochelle is the same, so we knew that eventually it would happen and Cornelia could have some additional time to think about what happens when we shove people away!! 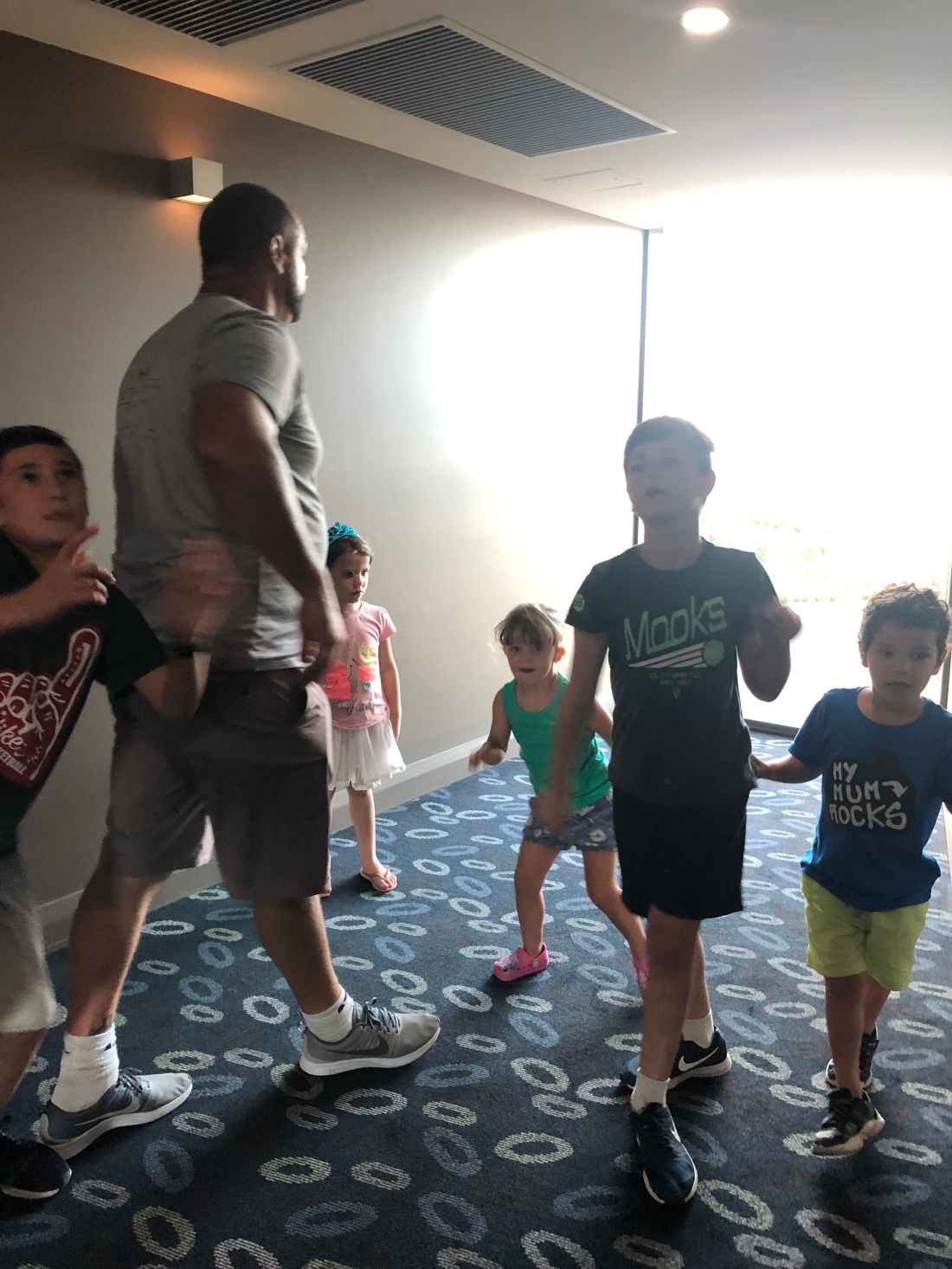 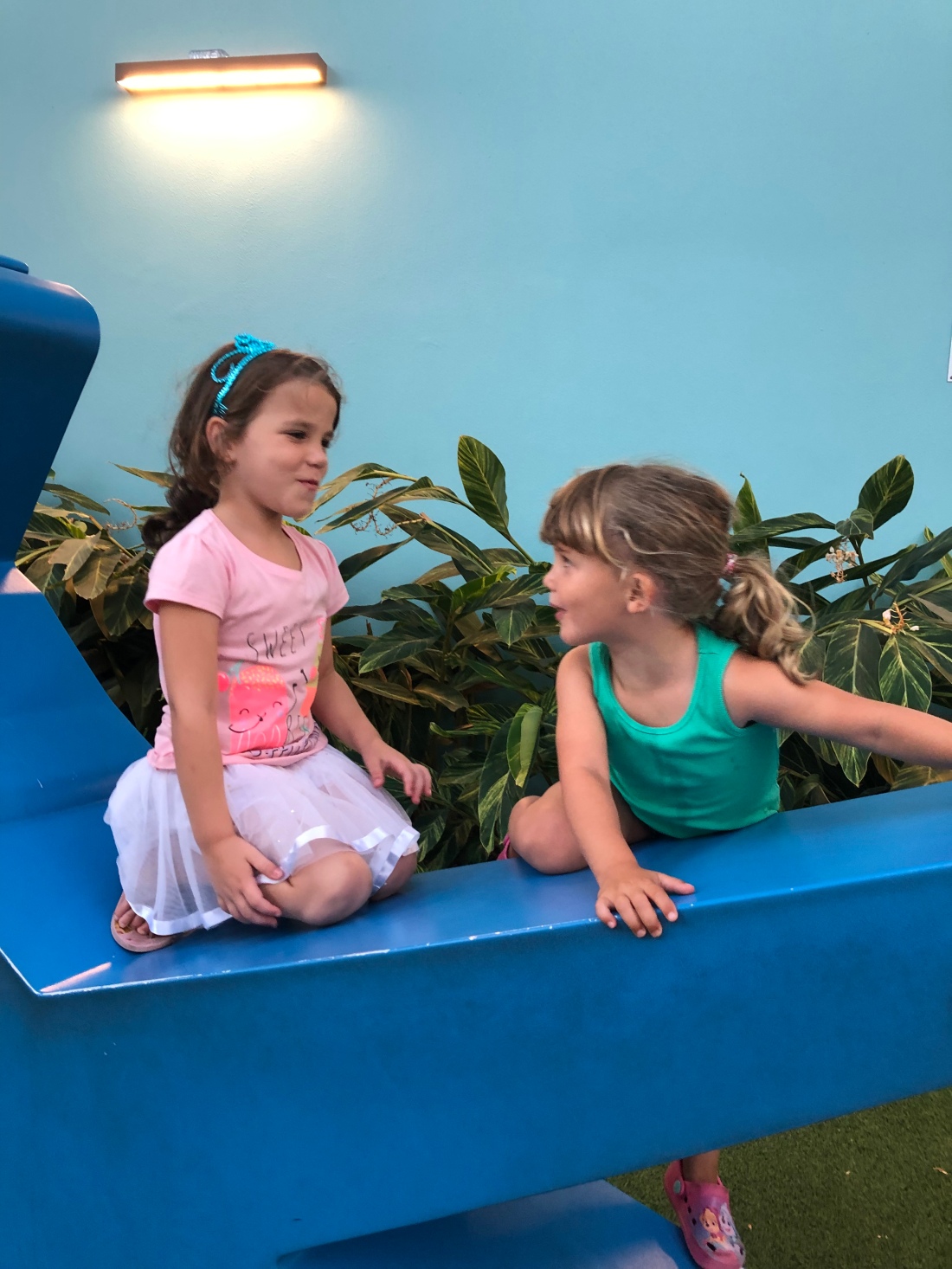 We were about ten minutes late for our table, but it wasn’t a problem as the place was virtually empty. The service was a little clunky – we had a sweet waitress called “In Training”, but our drinks took forever to arrive, as did the food. Daniel was told that he couldn’t have capsicum on his chicken pizza because that wasn’t what they normally do, and Rochelle and I had half a sheep each on our plate. I wasn’t complaining about that, of course, but it was slightly disproportionate to the rest of our meal! Anyway, we enjoyed our French Martinis when they finally arrived and did our best to make them last (and not have them spilled by the tribe of children!).

All too soon, it was time to say goodbye again. Cornelia was happy because Zara had, by now, managed to whisper her apology!) and we all cuddled and had photos while Levi slept through it all in Carl’s arms (having slept through most of our meal on Rochelle’s lap!). We love our extended family so bloody much. How very very lucky we are. 🥰

I had to carry Bugsy to car, as she was claiming tiredness and sadness at leaving the gang. It was a beautiful full moon – absolutely wonderful – but I couldn’t get a decent shot of it.

We were back in our apartment by 21:00, but that pesky child struggled to go to sleep, and was calling out for me until nearly midnight, as I was trying to wrap all the presents up. I managed to get them all done by 01:00 and was totally ready for sleep by then!

2 thoughts on “Southbank and family”