Cornelia called out for me at midnight, just as I was finishing yesterday’s blog. I thought (hoped!) that she just needed a wee and wanted me to take her, but she wanted me to read a book to her, and when I refused, she asked me to stay and cuddle her. She was awake for nearly an hour, and as soon as I tried to leave, my ankle cracked and the noise disturbed her. 😳 I ended up snuggling in her single bed until 06:00, when I managed to creep out and into my own bed again.

By the time she had woken up, Ian was already out buying milk and OJ for breakfast, and when he came back, we finished off our breakfast and packed up for our day out.

We set off for Noosa Main Beach, planning to post our Christmas cards first, then heading to the beach. We were five minutes into our journey when Ian just double-checked that I’d brought the cards for posting. Uh oh… I had not! We turned around, drove back and I legged it up to the apartment to retrieve them. Retracing our steps, we returned again to Noosa and tried to find somewhere to park. We discovered that the parking in Noosa is appalling! The streets were rammed with cars mostly hoping to find a space either on the road or in one of the various small car parks around. We were very lucky and spied a car about to leave its spot in the third car park we tried! On the plus side, parking is still free and we could park there for four hours, which seemed plenty.

Our first port of call was to find a post office for stamps and we found a kiosk in one of the little supermarkets tucked away off the main drag. We had about 25 cards to post and it took a while to lick ’em and stick ’em, but they are finally on their way… but don’t expect them before Christmas Day!!

Then we made our way through the crowds on to the beach, which was blessed with a good breeze – not too strong, but just strong enough to keep the heat of the sun from being too hot! Ian wanted to go and have a look around the shops (words I never thought I’d hear!) so once we’d found our spot on the beach, he went off, and Cornelia and I dumped our bag and headed straight for the sea! We had the best time in the waves together, practising her body surfing in the baby waves, and generally splashing around. 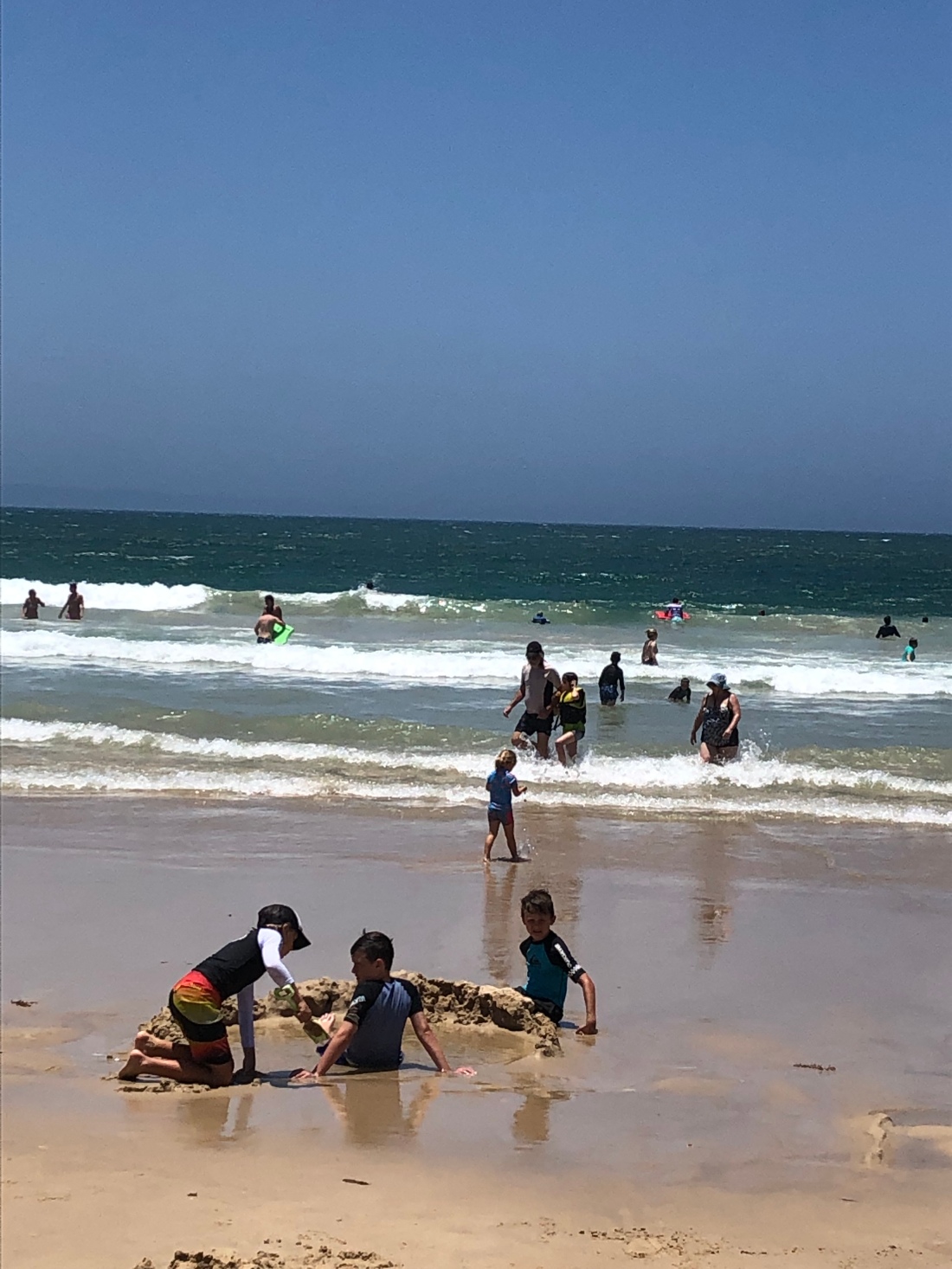 Ian arrived just shortly after we’d left the sea, and as we were busy making cheese ice cream for her imaginary mice and fruit pie for me. 😬 He had seen some nice linen shirts and said that if I was after a Christmas present for him, he’d quite like one of them, so I said I’d check them out after lunch. It was still really hot even with the sea breeze, so Cornelia and I went back into the water for a bit, until it was time for lunch.

We wiped off the sand as best we could and found an outdoor cafe (the streets are lined with them) with a decent menu. I wasn’t particularly hungry so just had a watermelon, strawberry and lime juice (yum yum, amazing!), and once I’d finished it, I left Ian and Cornelia eating to go and hunt for a bikini.

I’ve had my two bikinis for about ten years so I definitely felt as if it were time for a new one, and Noosa was the perfect place for this, with every other other shop seeming to sell swimwear. I went into one such shop and tried on numerous sets, before choosing one and saying to the sales assistant that I’d grab my husband first, just to see what he thought. (Again, words I never thought I’d utter…!) It was a nice fit, but just plain black and I’d been hoping to find something a little more interesting than that. As luck would have it, Ian and Bugsy were right outside the shop, and although I showed Ian the bikini, Cornelia was hanging out for the ice cream she’d been promised, so I said to the girl that I’d be back later! She suggested that I try their sister shop just up the road, as they had lots of different brands there too, so I said I’d pop in.

Cornelia had her ice cream first though – a tasty chocolate one, of course – and I left her and Ian once again to continue bikini shopping, and to look at the shirts Ian had said he liked.

I chose a couple of bikinis to try on, but again, I couldn’t quite make up my mind, so asked if I could keep these two behind the counter for half an hour or so while I sought Ian for his opinion (!). Then I went up the road to look at the shirts he liked, but was unsure which shop he’d been talking about, so went back to find him and Bugsy. She’d finished her ice cream Andean up to greet me, flinging her arms around me as if she hadn’t seen me for a year. 🥰 We went back to the bikini shop, where I spied a third one to try on, and did a quite fashion parade for Ian and Cornelia. The decision was immediate and mutual- the third one. I thought I’d try my luck, seeing as Ian had said he’d buy it for me as my Christmas present, and managed to sneak in a matching kaftan to go with it. I told him to cover his ears so he didn’t hear how much it all cost. Because it’s the thought that counts… 🤔

Then it was Ian’s turn, as I dragged him up to the shop to show me the shirts he liked. We narrowed it down to two colours and I told him to walk back towards the car slowly while I chose one. Of course, I just bought both of them. A man on a world adventure can never have too many short sleeved linen shirts…!

I could’ve spent hours in town, but we suddenly realised that we’d been there for well over four hours and did not want a parking ticket, so dashed back to the car park. To our great relief, we did not have a ticket and turned the engine on to cool the car down before we could get into it without overheating in five seconds! Back home, I cooked tea – salmon, potatoes broccoli and carrots for Cornelia, and chicken stir fry for us – while she watched Elf with Ian (once he’d returned from a quick trip to the bottle store for beer!). Ha, she loved it!!

Once we’d finished tea (and Elf) we had a good chat with Nanny Enid to wish her a happy 80th birthday! She had a busy day planned, so we were glad that we caught her before she started her celebrations. Nanny Enid – we hope you had a wonderful day! 😘

Ian gave her her bath and once again, I could hear an argument brewing between the two of them. I took over and had her washed, dried and ready for bed in fifteen minutes. His tolerance levels are still low because of his discomfort and she completely pushes his buttons to get a reaction. They are as bad as each other and it’s very funny to watch! (Not that he would agree, mind you…)

She had enough time for one bedtime story, and after we left her room, she wanted to keep the light on. We compromised by Moo promising to look after her, and leaving the door open to let some light in. And thankfully that did the trick.

I stayed up to update the blogs which took me up to 01:00 whilst watching the Masterchef finale, but at least I was finally all up to speed again. Such a satisfying feeling!