I must confess, I have not had the most exciting of days today.  Despite a great sleep, I woke up with a feeling that I really must get on top of things again:  I am days behind with my blog, I haven’t updated the expenses since we’ve been in Australia, and we haven’t sent any Christmas cards yet, nor ordered any presents.  Additionally, I haven’t run for five days and I’m starting to feel grotty because of it.  I think I am also already missing my new family members and was still slightly resentful that we were here in Sunshine Beach, rather than the Gold Coast.

I pulled myself together over breakfast, which we enjoyed outside in the beautiful sunshine.  It was a fabulous start to the day, and I asked Ian if he wanted to take Cornelia to the beach for a couple of hours, while I tried to get on top of the life admin.  He thought that was a great idea, and once I’d packed them off, I made a start.  Well, that two hours went quickly!  I managed to get a couple of days of blogs written up, and did a load of laundry, but that was really about it.  I have no idea where the time went, but I didn’t move from my chair except to hang out the washing and go to the loo! 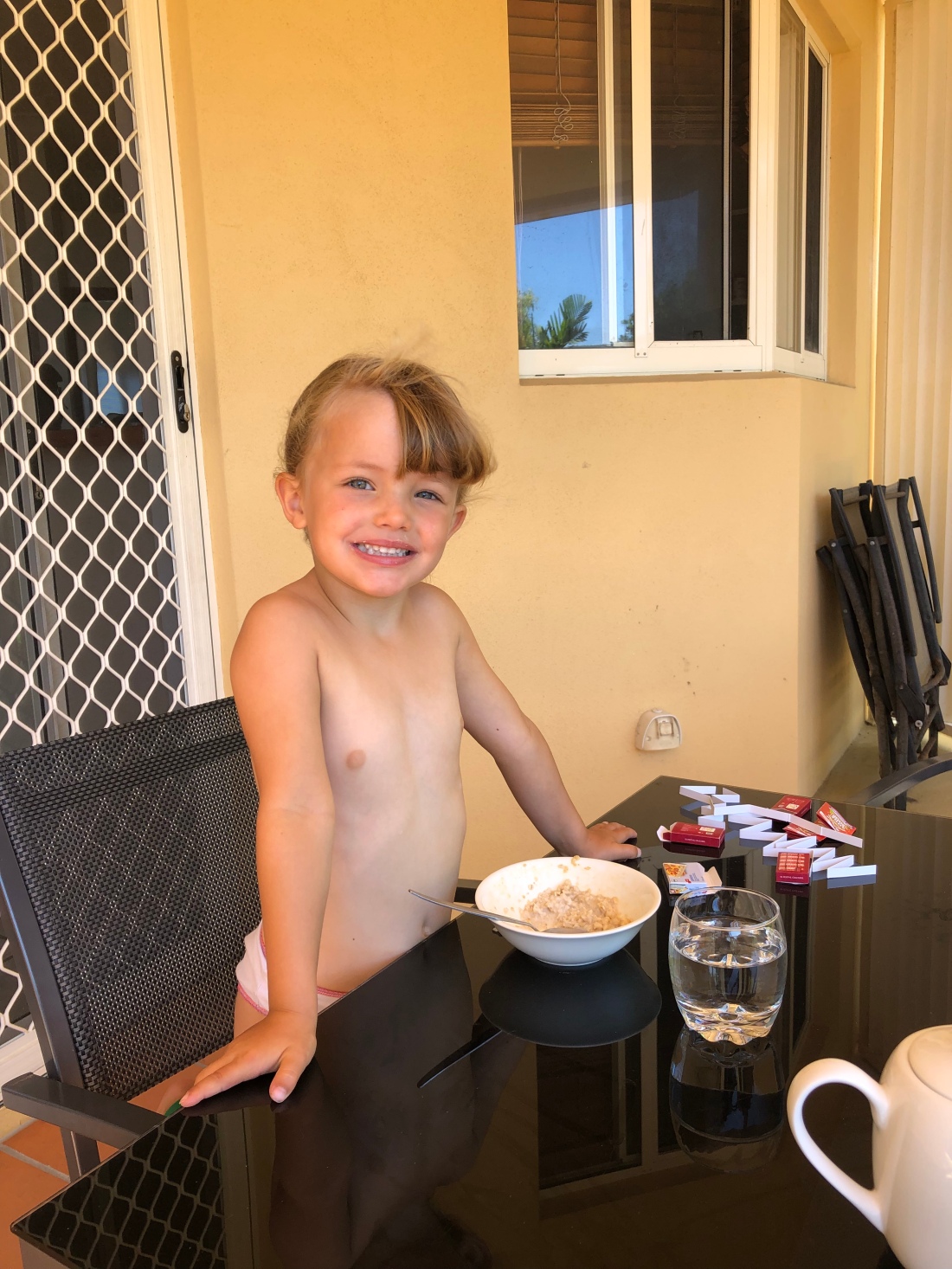 Ian and Bugsy came back just before 13:00, and I’d made sandwiches in anticipation of their return.  Cornelia was covered in sand and had been in a bit of trouble, when she threw sand over Daddy.  She lost her ice cream for the day, but apparently was able to earn it back by walking back nicely from the beach, and eating all of her lunch.  Hmmm.

I rinsed her off in the shower, then she put on some undies and began to tackle her sandwich.  It took her nearly an hour to eat it, by which time, I’d also reached the end of my patience!  I put a time limit on her, remembering that this had worked in the past, and sure enough, she had shovelled the last few bits into her mouth before her time ran out.  Pesky little thing!

After lunch, we walked down the road to the local restaurants and general store, and had a nosy around the shops there.  There were a couple of nice bikinis that I liked the look of, and thought I would probably go back there after we’d ice-creamed to try them on.  But Ian thought there would be more choice up at Noosa Junction (the main shopping area where we’d been to Coles yesterday), which was where we were going to go later.

The ice cream shop that had a big board saying “Gelato” was closed, and although we suggested whizzing up to Noosa to the massive gelato shop there, she wanted an ice cream NOW and had seen a board outside the General Store offering Cornettos and the like.  I tried convincing her that a chocolate ice cream from an actual ice cream shop would be much nicer (in my desperate attempt to get to the shops in Noosa!) but she was having none of it, and ended up with a chocolate Cornetto, which she managed to eat in about five minutes.  How come it takes her so bloody long to eat a sandwich?! I also managed to buy some decent Christmas cards, so finally, I can get those written and posted, although I suspect they won’t arrive before the 25th! 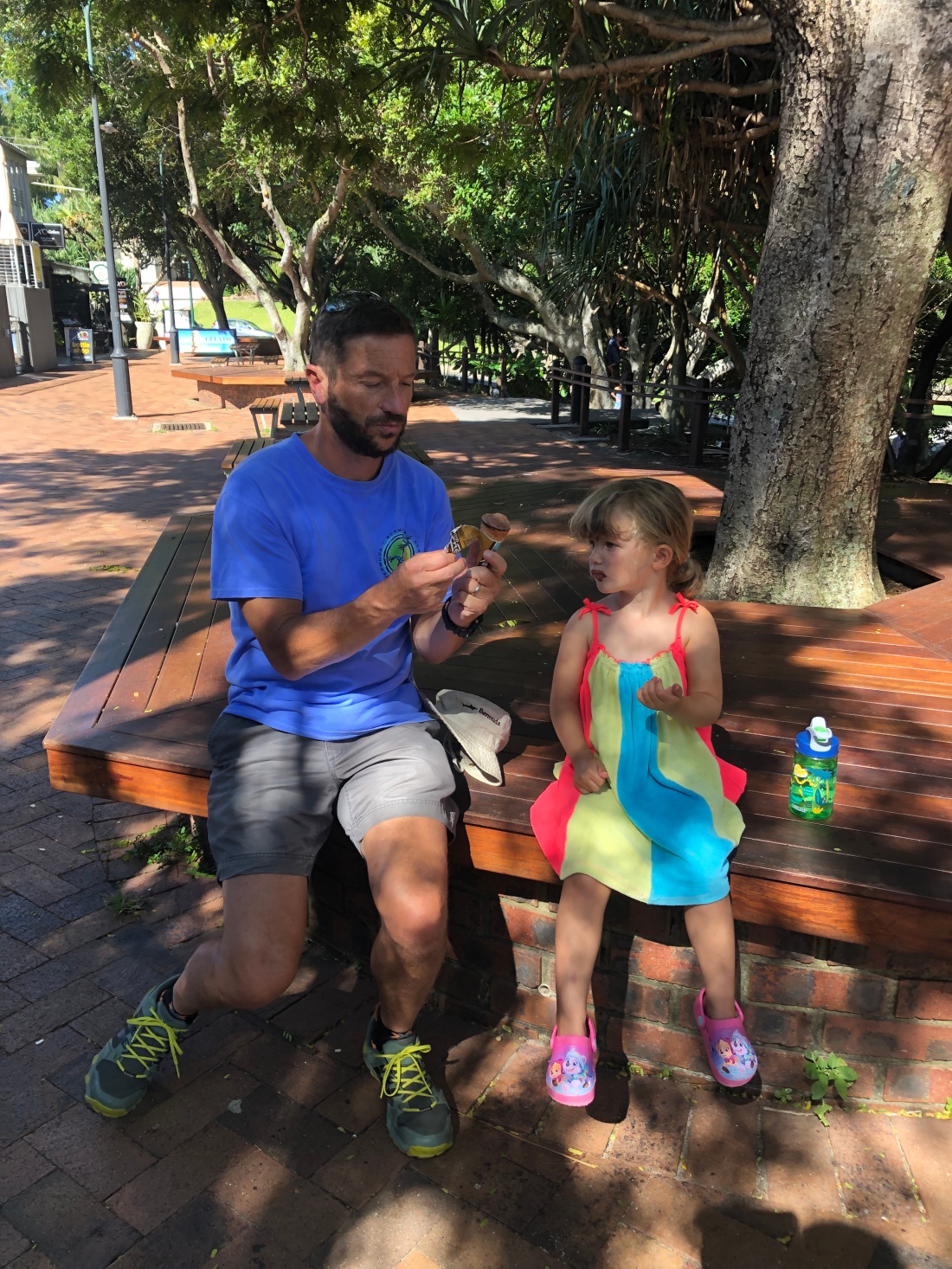 After the ice cream, we walked down to the beach, via a couple of swings that occupied Cornelia for ten minutes while we tried not to melt in the humidity. 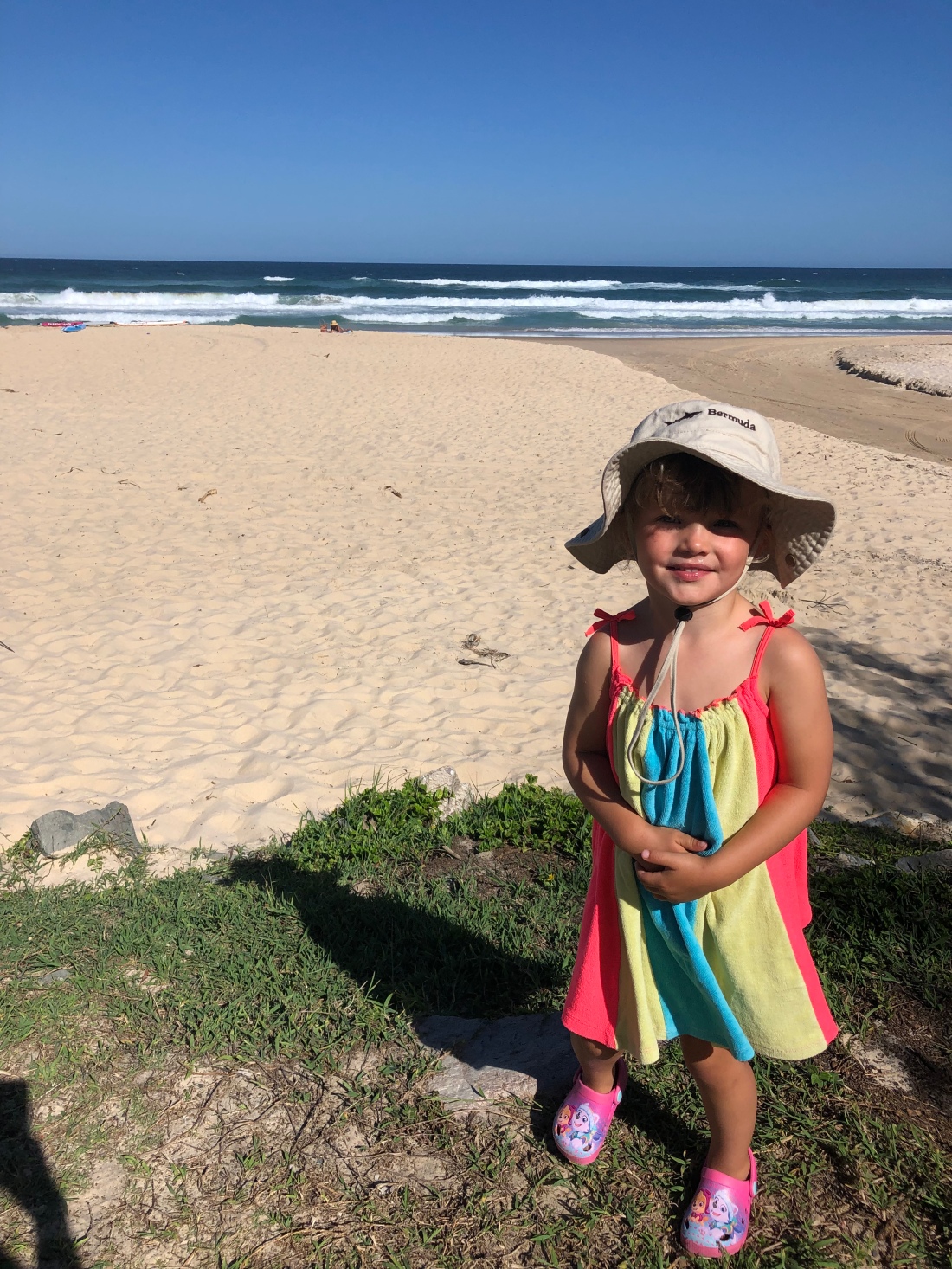 We ambled back to the apartment, and I thought Bugsy would be up for a swim in the pool, but she decided she just wanted to watch her Kindle for a bit.  I had plenty to do, so didn’t mind and cracked on with the Christmas cards and expenses, while Ian stretched his legs with a walk to the bottle store for some beers.  His knee, neck and Achilles are still bad, and he also has a swollen finger, so he really is in a terrible way.  I’ve asked him to go a physio, who may be able to diagnose any underlying problem and give him some specific exercises, but he’s refusing.  At least he’s agreed to take some Ibuprofen to see if that can reduce some of the swelling around his knee.  While he was out, I gave Bugsy a yoghurt suckie and a glass of milk, which she was drinking nicely at the table, before the glass slipped out of her hands and smashed all over the floor.  So, she was covered in milk, as was the chair, and the floor was milky and glassy!  She burst into tears, but I knew it was an accident, and she calmed down quickly, once I’d carried her out of the way of the spillage and cleaned her off with a cloth.  Then she was worried that I would cut myself again (I did the last time I picked up a broken glass) – it turns out that it isn’t the blood she doesn’t like, just the noise I make when I cut myself.  A high-pitched “Ouch!” apparently….! Ha, she’s so funny!  Anyway, I did cut myself, but didn’t even squeak about it this time.  Ha!  I was busy mopping up when Ian came back and he helped finish cleaning up, while I carried on preparing supper.

I was in my running kit, and had been intending to get out all day for a run, and finally managed to go once I had put the potatoes in the oven to bake.  I left Ian with Cornelia, hiding in a den she’d made on the sofa out of pillows, watching Paw Patrol, out of the way of the wet floor!  We were waiting for it to dry before we could give it a thorough sleep, and Cornelia had been instructed not to walk around without her shoes on, which gave her the perfect excuse to stay on the sofa.

My run was lovely, if not a little hilly.  As mentioned, I hadn’t been for several days and was worried that I would be starting again. Again.  It was also still very humid, and I was grateful for the sea breeze that was blowing.  I ran down to the beach and along a footpath in some woodland, before returning via the road, stopping to take various photos along the way.  I found the most amazing tree – it was stripped of its bark (at least, that’s what it looked like) and it looked like a cross between a wrinkly elephant and a mottled snake’s skin.  I was absolutely fascinated by it, and wished the photos could show its true beauty.

Back at the apartment, Cornelia was still glued to her screen on the sofa, and Ian had just about finished sweeping the floor.  The potatoes were cooked to perfection, and I dished them up, smothered in butter, cheese and beans, with ham & coleslaw for me & Ian as well.  Cornelia had some strawberries, grapes and watermelon afterwards, and then quite willingly went off for her bath.

I could hear Ian getting cross with her for not sitting up to have her hair shampooed, so I went in and took over before it all went wrong and we ended up with a screaming child on our hands.  His level of tolerance is lower than usual, due to his continual discomfort and pain, I think, and Cornelia is good at winding him up, even though it never ends well for her!  I finished her bath, then told her she was going to have her lights out at 20:00, so she could spend as long as she wanted in the bath, but that would mean less story-time afterwards.  She gave it some thought before realising that time was running out, and was quick to get out and dried, and into bed.  She had just enough time for one story, which Ian read, and then she settled down amazingly well.  I love it when a potentially awful situation is turned around and the day ends so nicely!

I went back to my table to finish off some of the blogs and get the photos uploaded.  I am sitting next to a long list of things to do, but it’s definitely time for bed!