Although Cornelia called out for me at about 03:30, she did not come running into our bedroom and seemed to go straight back to sleep.  And so, to my delight, apart from getting up to check that she was okay after she’d called out (and hadn’t fallen out of bed or anything), we all enjoyed a good night’s sleep.

We breakfasted together and showered, ready for our day, and whiled away the morning, trying to book up our next few days of adventures in Queenstown.  Cornelia amused herself by drawing leaves, cutting them out, and sticking them onto a tree, and making herself Rapunzel hair by gluing lots of strips of paper together. Apart from a small falling out when Ian was doing his press ups (Cornelia wanted to help him…), we enjoyed a calm and relaxing morning.  Even the sun was out!

Ian had booked us on a KJet boating experience that started at 14:00, so we drove into Queenstown and parked at the top of one of the steepest hills I’ve ever seen in an urban area.  We walked / ran down the hill, and along the waterfront until we reached the busy part of town.  It was bustling and packed, but not in a horrible touristy way.  It’s hard to explain, but it felt as is everyone there was off to do something exciting, rather than just look at and enjoy the scenery.  It definitely gave a different vibe to the place.  We had decided to have an early lunch and chose Ivy & Lola’s.  The menu was amazingly interesting and there was so much choice!  I ended up with a dukkah roasted cauliflower with poached eggs, beetroot labneh, quince-glazed pumpkin, salsa verde and various other delicious things, Ian had Eggs Benedict and Cornelia chose scrambled eggs with hash browns.  She’s never had a hash brown before (I don’t think) and she loved them.  It’s safe to say, if it’s potato-based, she will enjoy it! 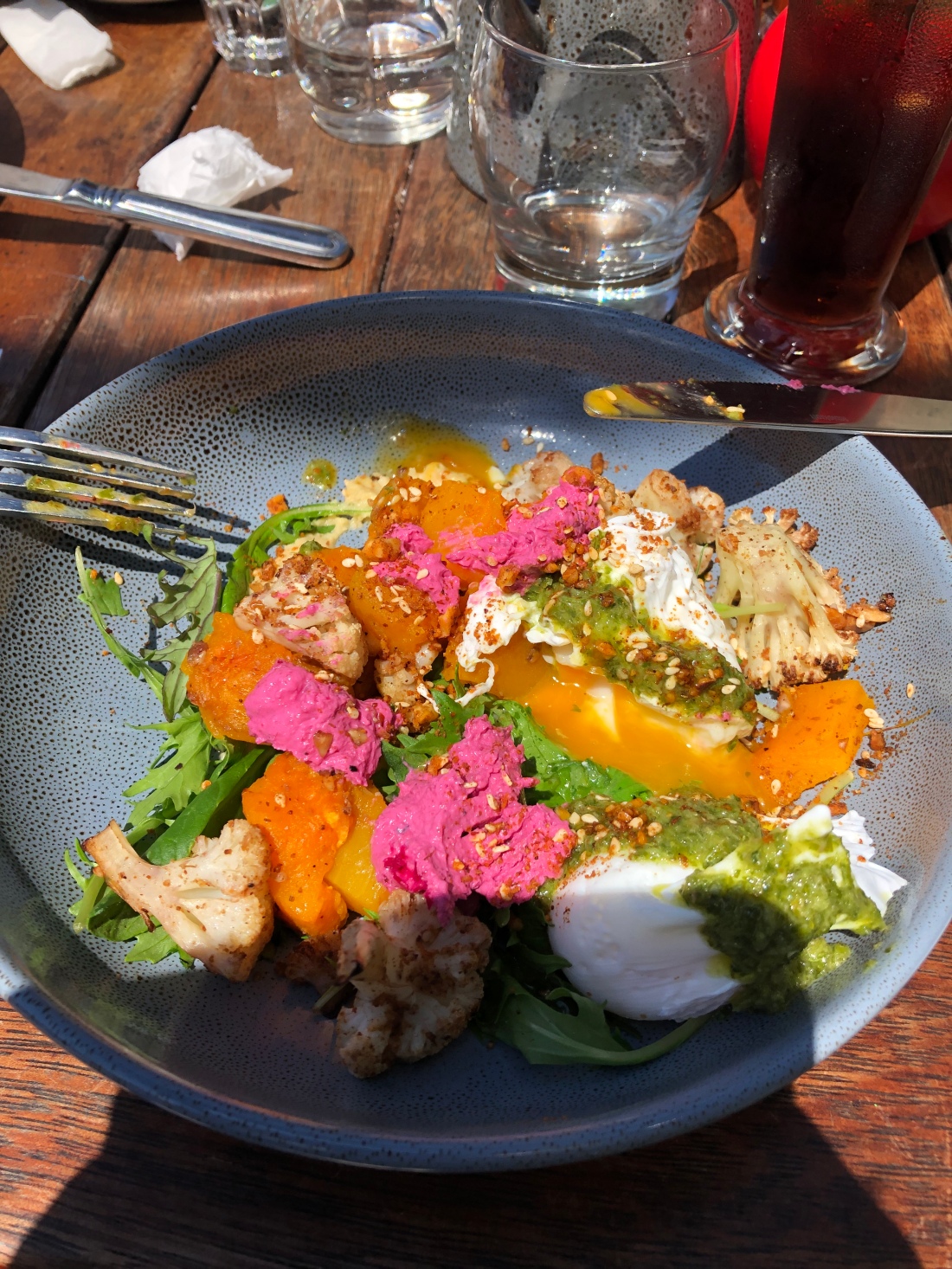 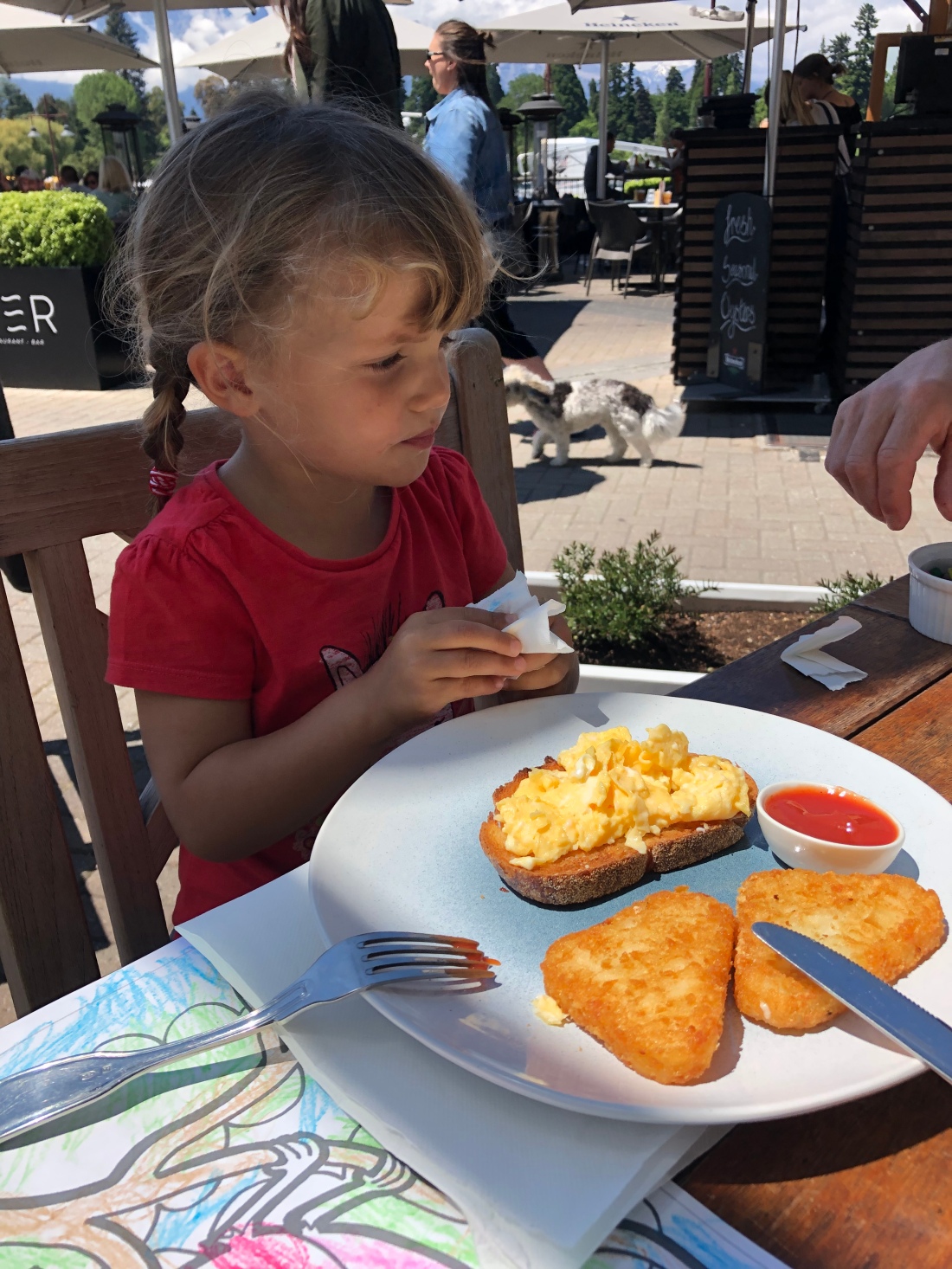 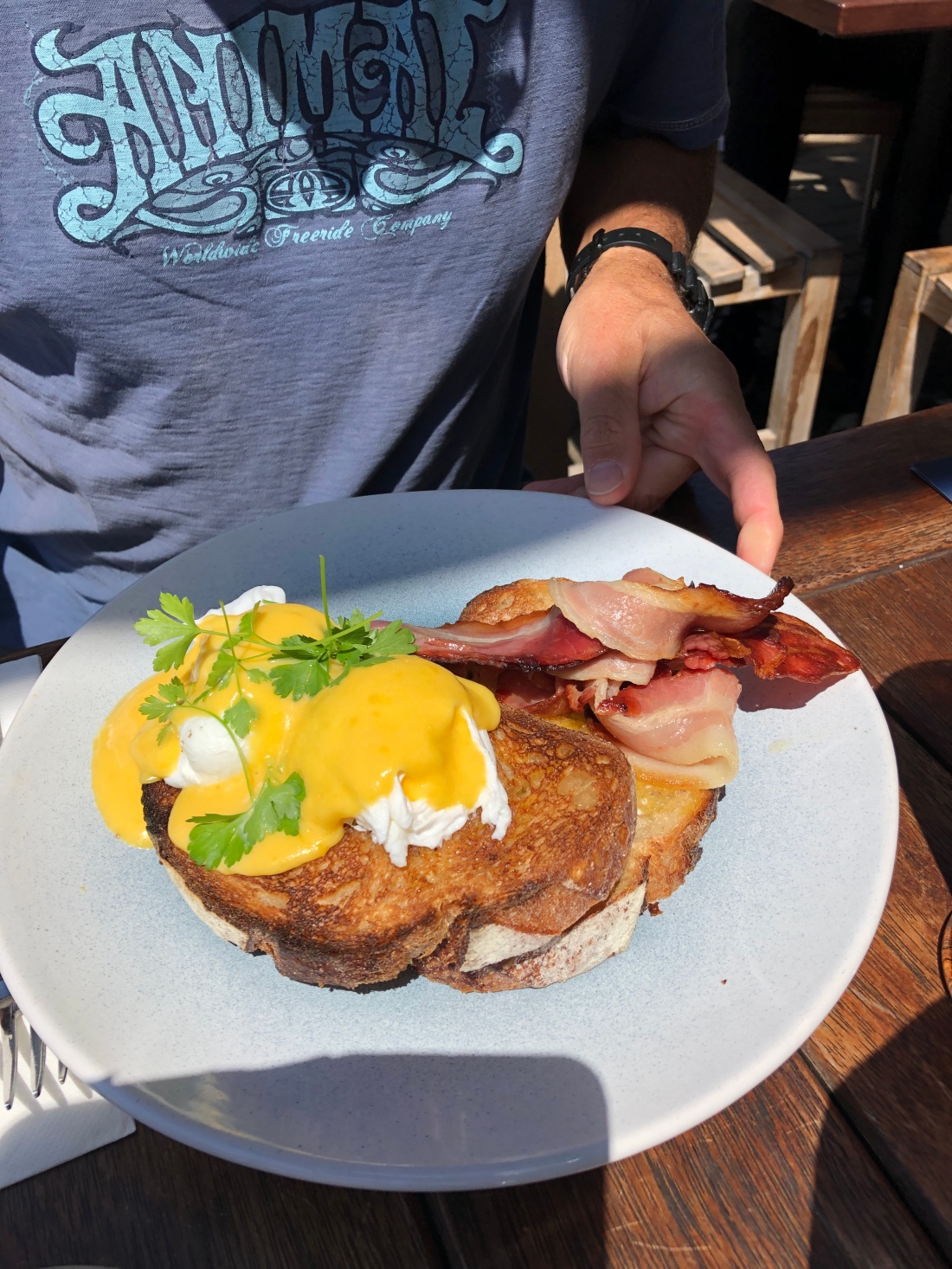 She did some great colouring in, and was generally completely charming.  She earned herself a chocolate ice cream (we still had a bit of time to kill), then did a bit of dancing with Daddy to a guitarist busking on the sidewalk.  Our last five minutes were spent throwing stones into the water on the little pebble beach, and ah-ing at duckling following its mummy around. 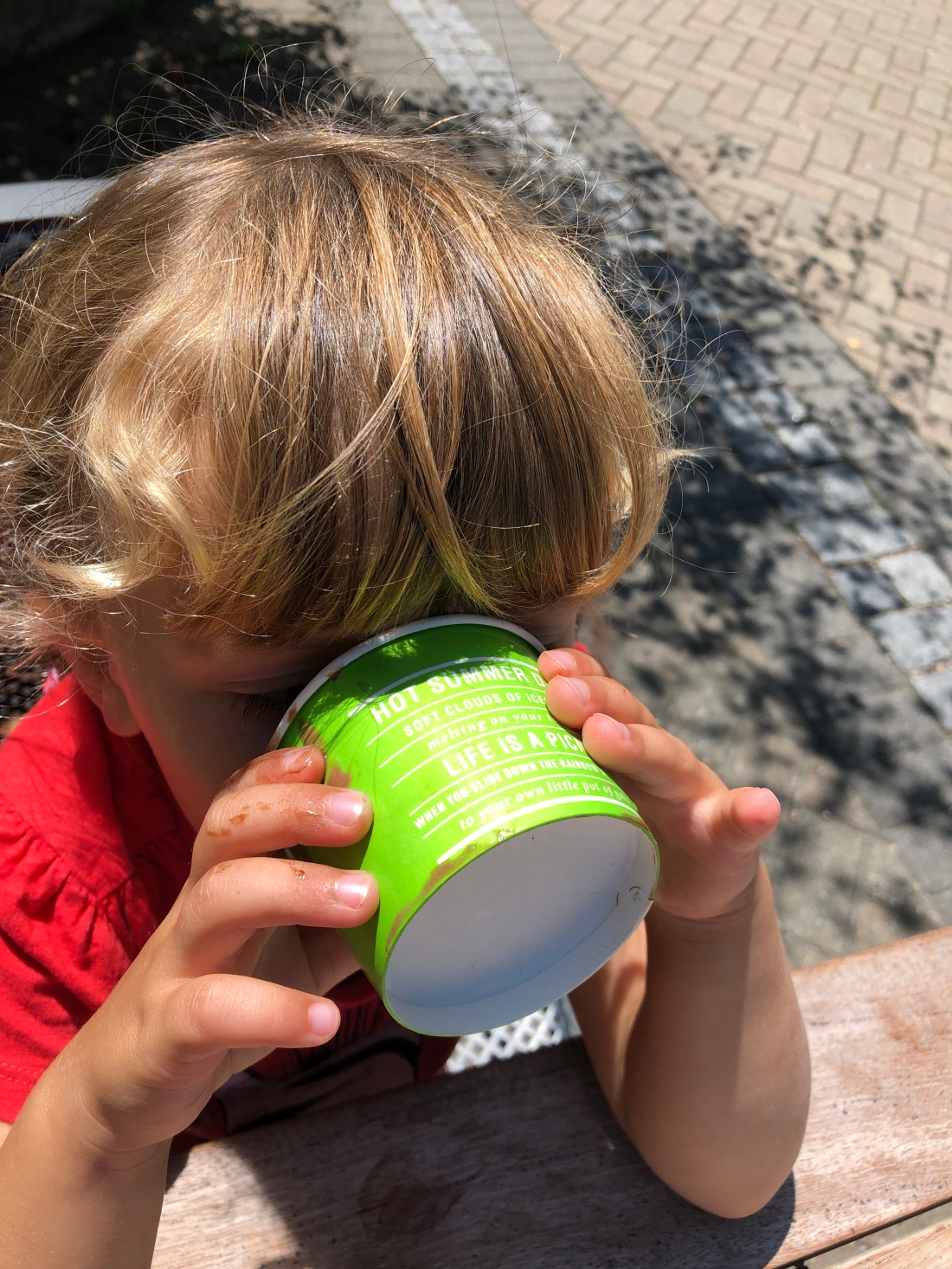 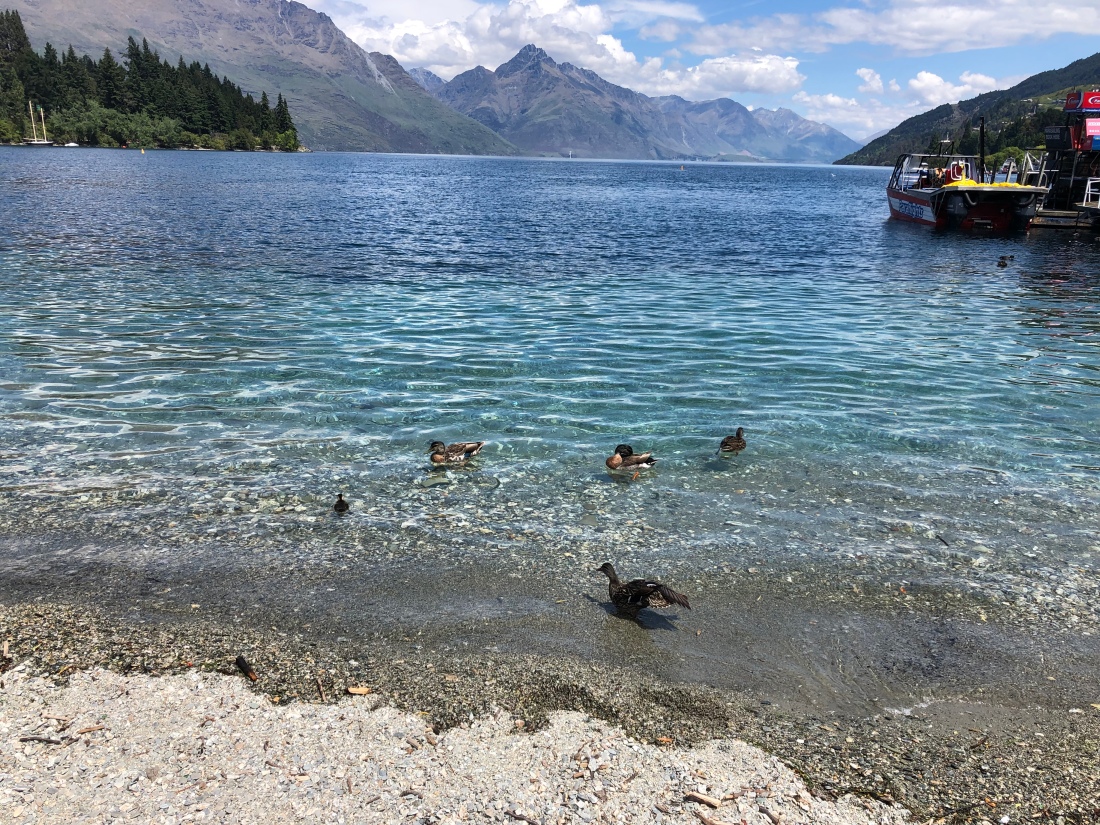 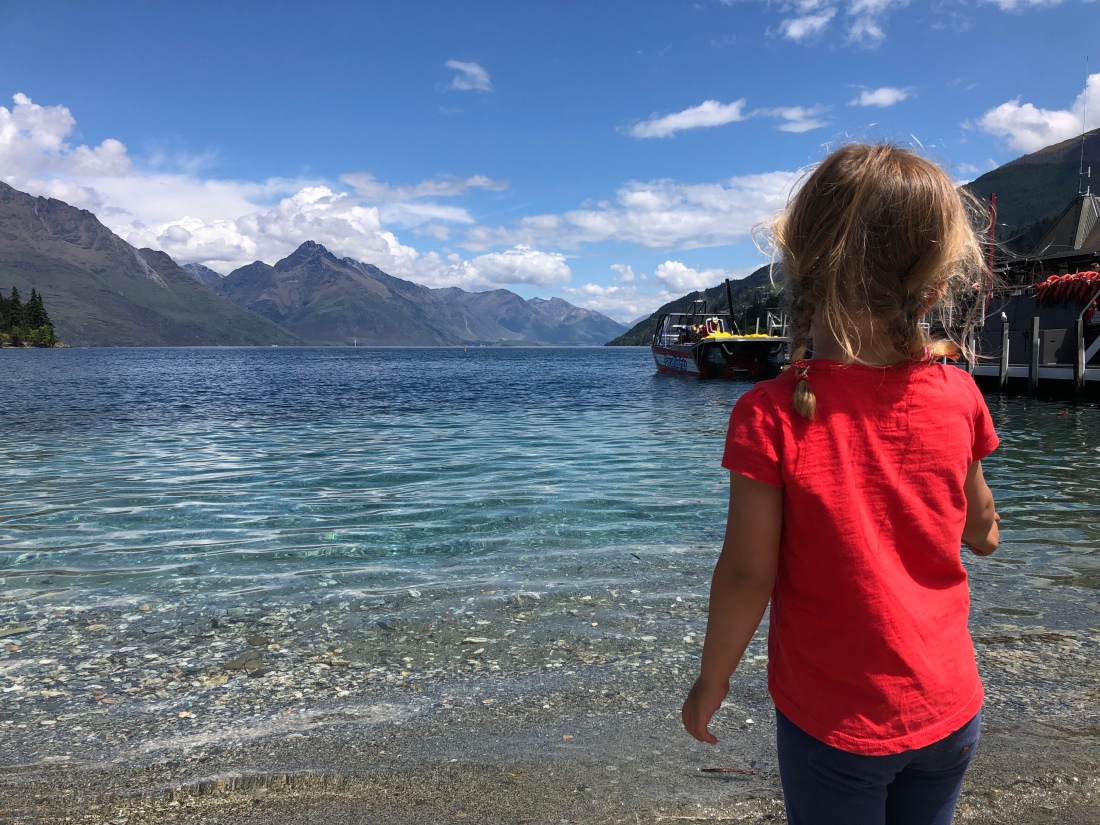 At the KJet jetty, we donned our life jackets (Bugsy received a splash jacket too, lucky thing!) and boarded our powerboat.  She was so excited, and was singing songs and dancing and being totally gorgeous. 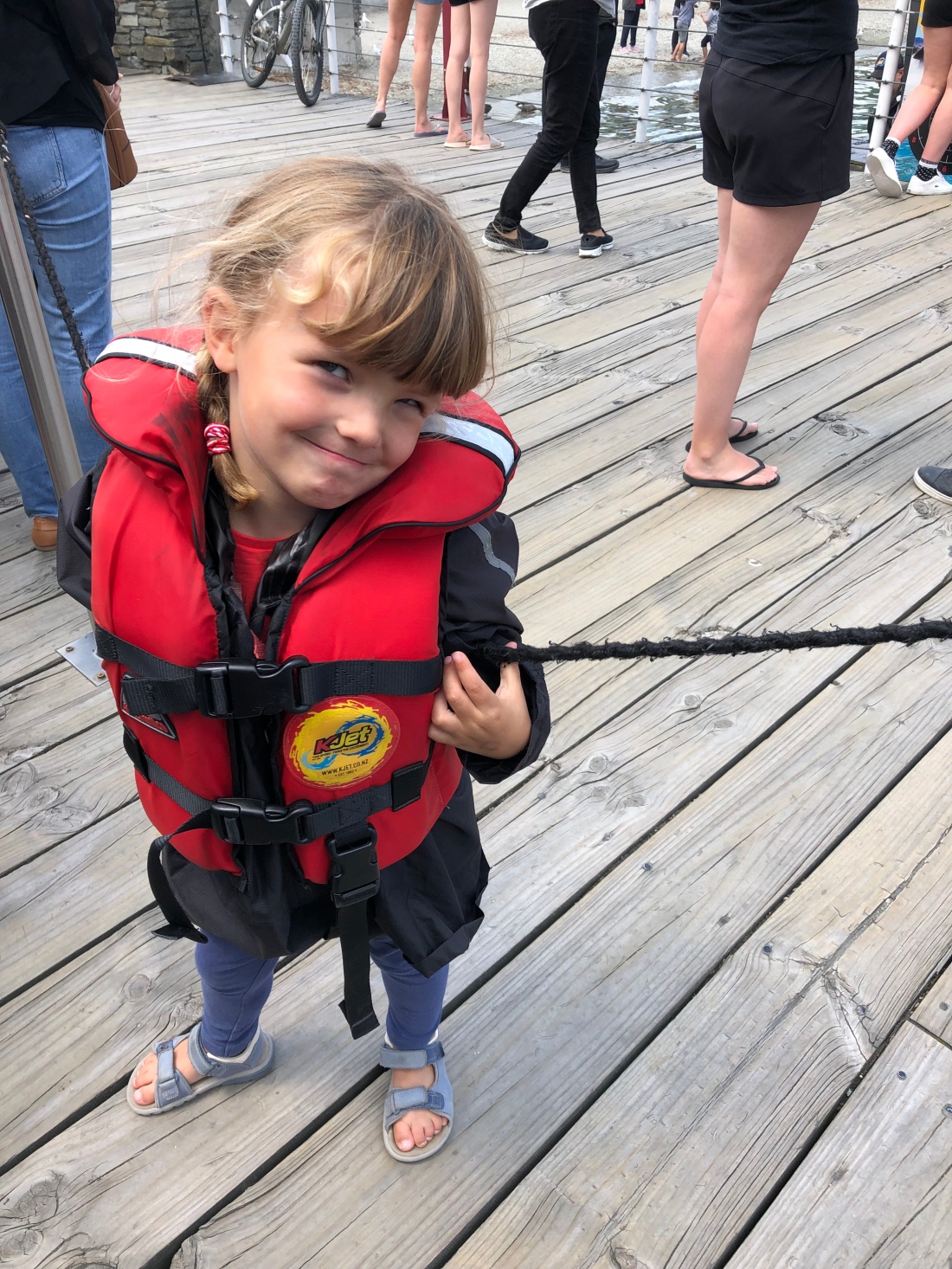 Soon, we were in our boat and Reagan, our pilot, told us what we could expect: to zoom along the Kawarau River, with lots of 360* spins, then into the currents of Shotover River, where the water is sometimes only a few centimetres deep,  and back again.  And off we went!  We did indeed zoom off very fast, and it was absolutely brilliant fun.  Cornelia was whooping with delight, making our boat companions laugh with her, and she cried out “This is the best fun I’ve ever had!” which made me feel over the moon. I had put my Garmin on to record the trip, and we covered 25.5 miles in exactly 5o minutes, with an average moving speed of 33.2mph and a top speed of 47.6mph.  Sadly, I only burned off 59 calories though…😂 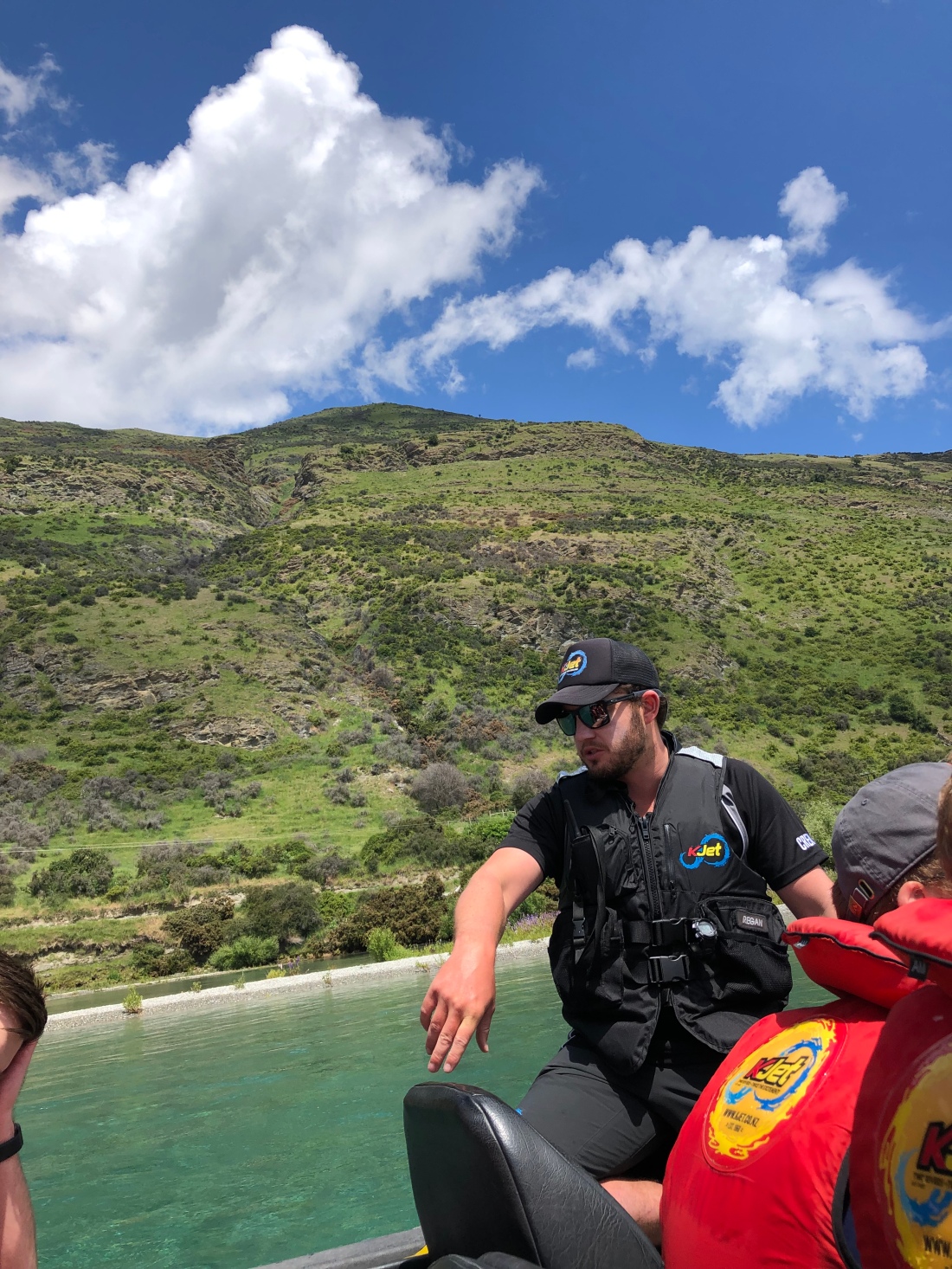 After the boat trip, we were invited to the underwater observatory to look at the fish and eels swimming around in the lake, and look at the various photos and videos that were taken.  I told Ian to look the other way while I purchased the lot… If you are interested in the video, here’s the link!

Cornelia was totally captivated by the eels in particular, as well as the ducks that dived down to the bottom and paddled back up again.  The water was really clear and you had really excellent visibility.  She made a new friend for a few minutes, and they clambered over the stools together and chased each other around for a bit, until it was time for us to leave, with the promise of some time at the playpark we’d seen when we parked our car. 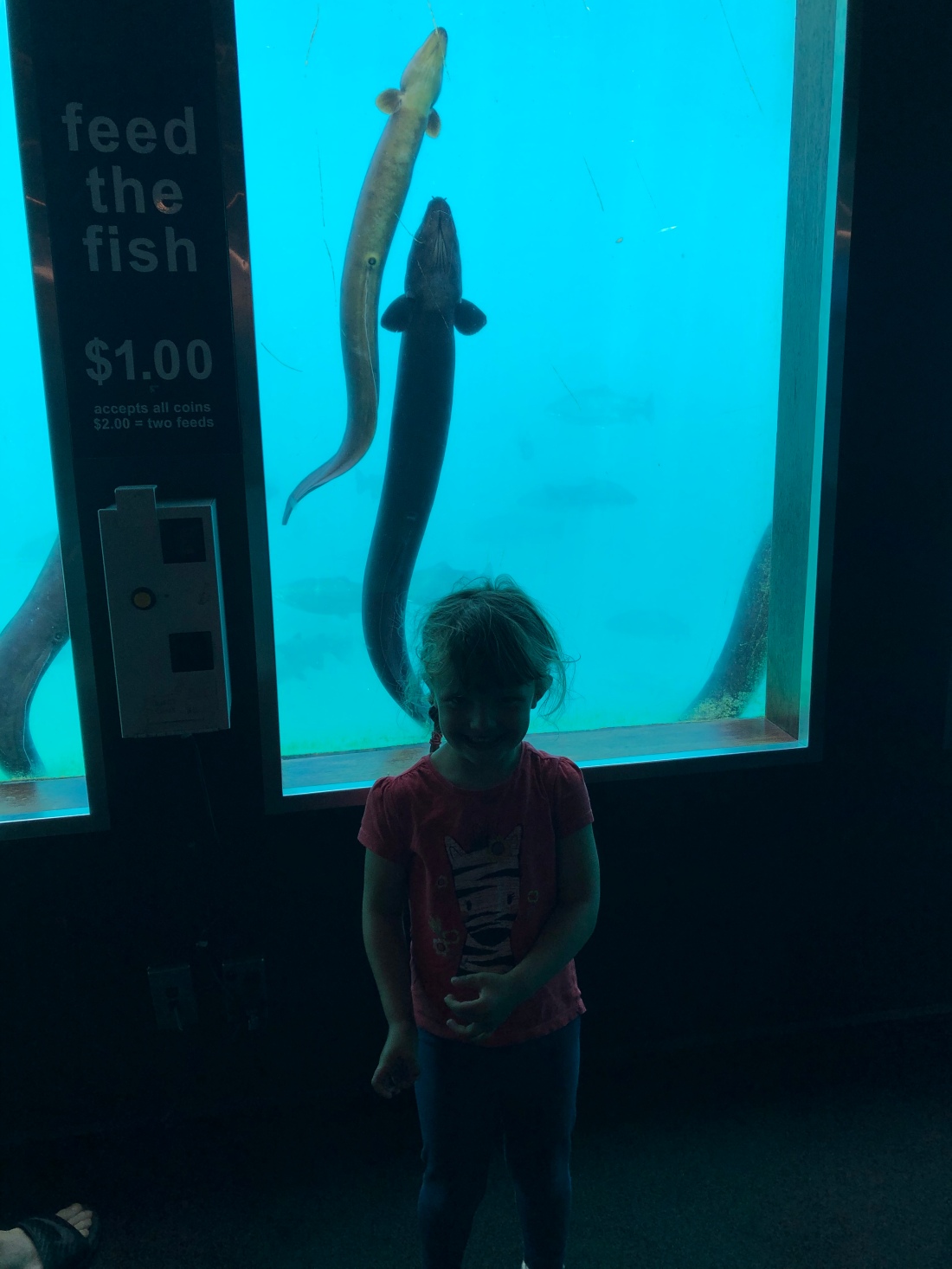 But first, we stopped off for a cup of tea (for me & Ian) and a chocolate brownie (for Bugsy), so we could have a think about the next day or two, and what we wanted to do.  We would really like to visit Milford Sound, but it would be a long day on the coach for Cornelia (4.5 hours there, and the same back), and, having been on a cruise in Alaska, I’m not sure how interested she would be in sailing down the fjord.  There is another option of flying there and back, but it is quite expensive, and Ian wanted to wait and see if the price came down.  Alternatively, we will be near Mt Cook in a few days, so we could do a helicopter/snow plane flight there, that only takes 45 minutes, and that I’m sure Cornelia would find much more enjoyable.  So, we didn’t make any decisions…!  But the brownie was very nice…! 😉

We walked back to the car – in fact, I decided to run up the ridiculously steep hill, so I could take photos of Ian & Cornelia walking up, and Bugsy managed the whole thing without complaining once.  I think she is now totally used to the fact that she isn’t going to be carried anywhere. 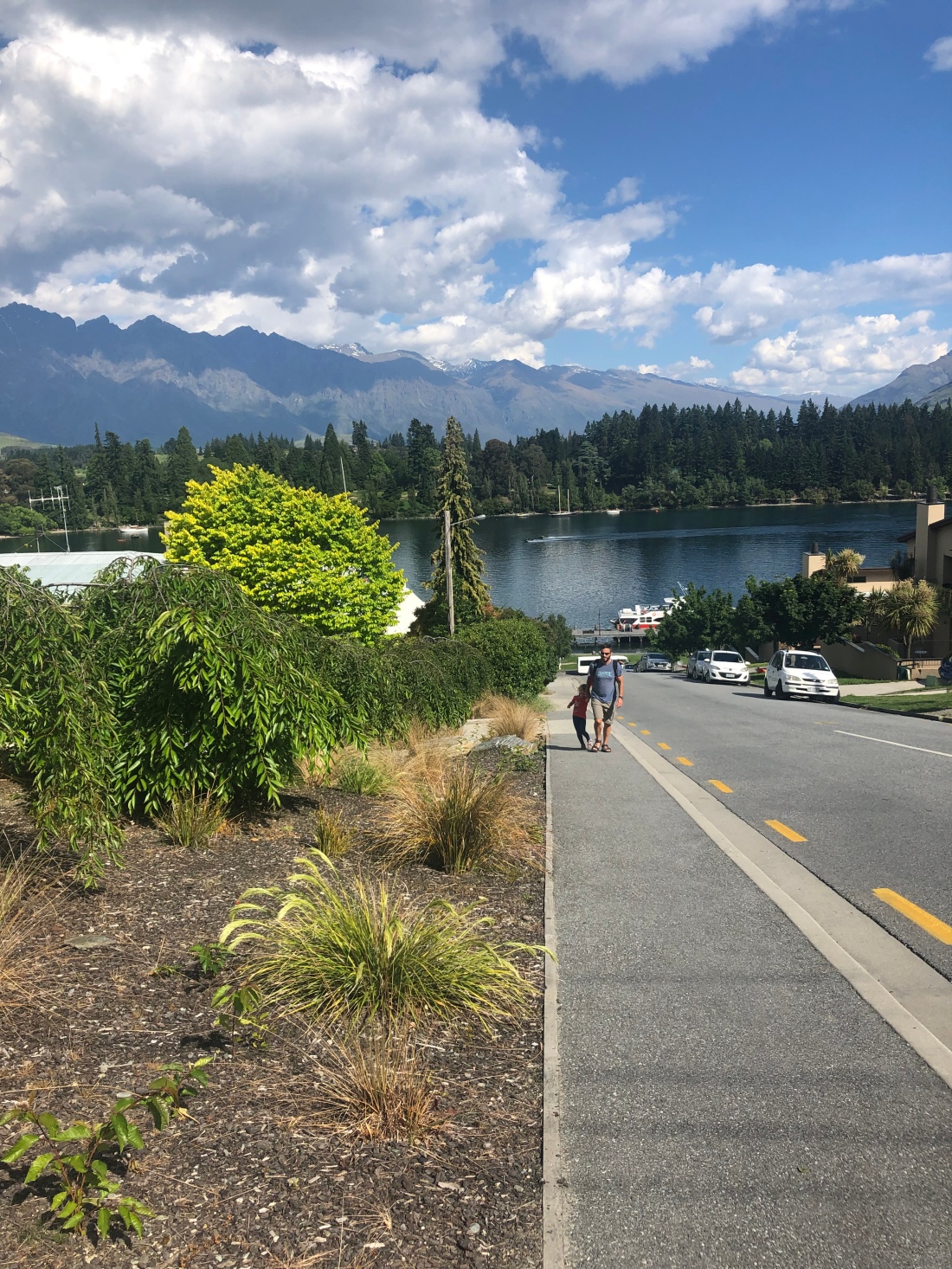 She was very keen to get into the playground, and delighted when three kids came to join her.  She ran around with them, playing pirates and being ninjas together, and having fabulous fun.  She has really had a terrific day.

Unfortunately, it was getting on and I didn’t want to make the mistake of getting her to bed too late.  We drove home, and I cooked her tea (salmon again) while she wrote out party invitations to her pretend friends, for a disco I’d promised she could have this evening before bathtime.  (There is, rather fabulously, a disco lightbulb in the lamp in the front room – totally unexpected and completely brilliant!)  While she was eating, I went out for my quick two mile run, slightly nervous about the enormous black clouds that were approaching, but I managed to just about outrun the rain and the lightning, although I was watching it get closer to me every step! 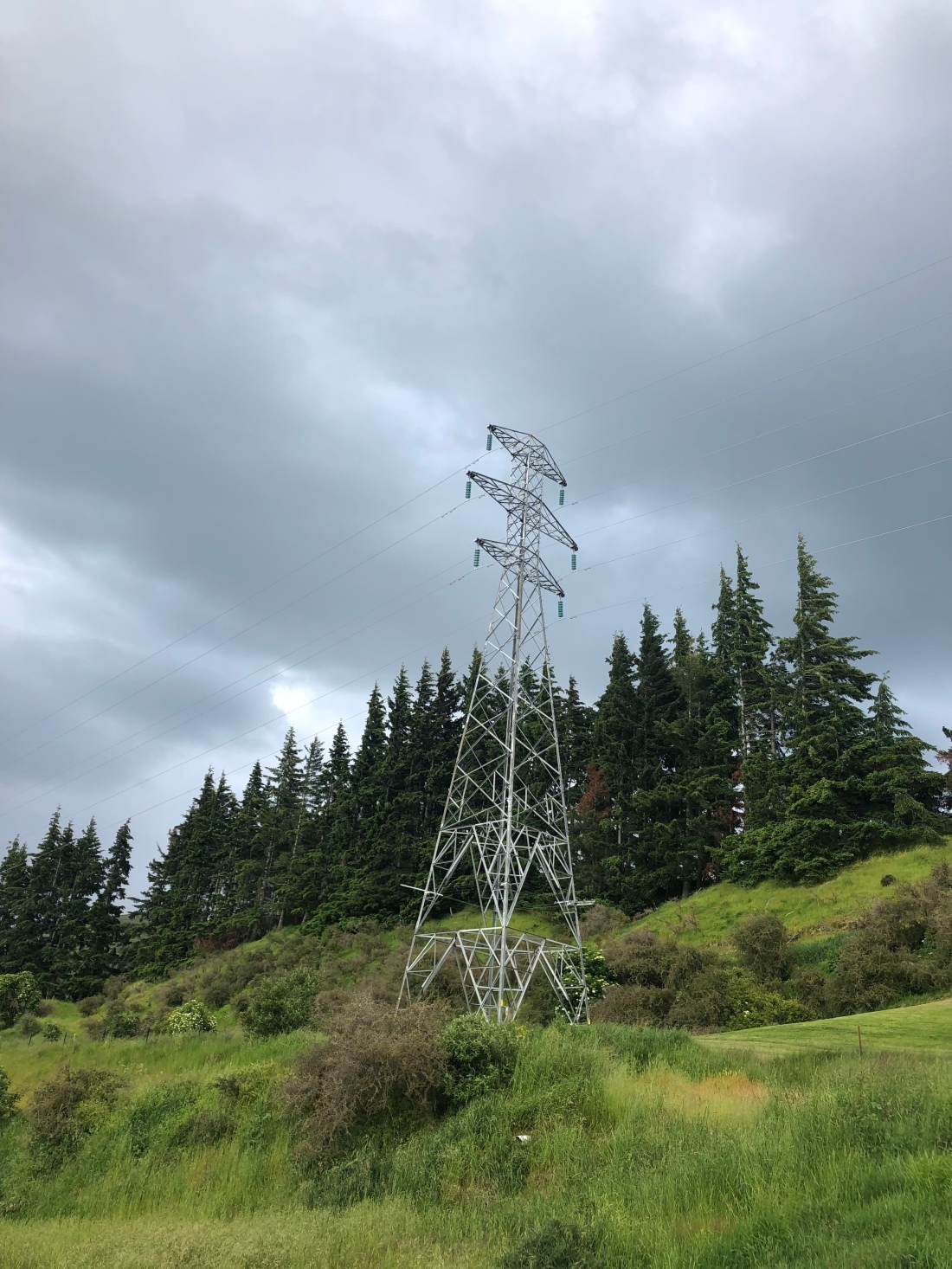 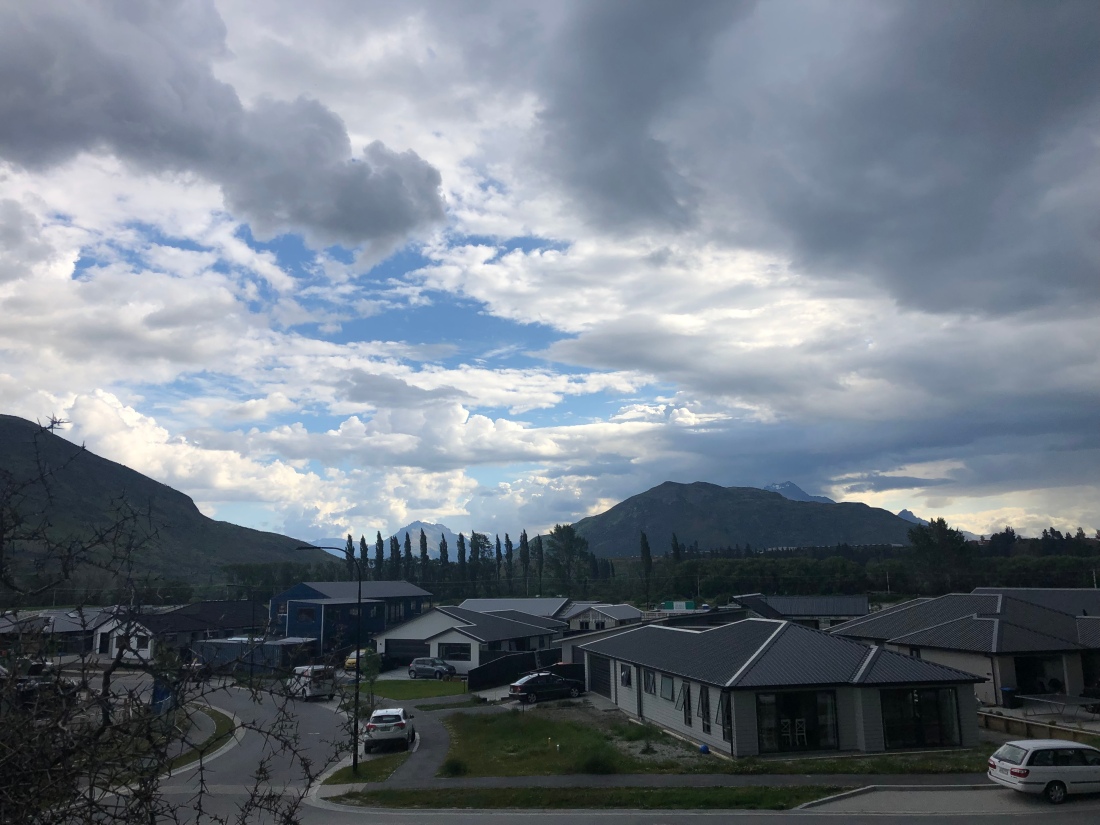 Cornelia was finishing her tea, and once that was done, we closed the doors, curtains and blinds, and switched on the disco light and an Amazon “kids’ party” playlist, and had a good old dance together.  Ah, we had so much fun!  All of her pretend friends were there, and she was dancing with them, then abandoned them to pretend to be Rapunzel escaping the tower by sliding down her hair (the paper strips she’d made earlier) and then using that as a skipping rope.  She had so much energy!

Reluctantly, we had one last song, then she was off for her bath with Daddy.  I could hear them arguing about her not getting out of the bath when he’d asked her three times, and eventually he came into the front room, saying that he wanted to avoid the tears and tantrums of last night, so he was just walking away.  It was totally the right thing to do tonight.  I replaced him and Cornelia & I negotiated seven more “slides” in the empty bath, before she got out.  She agreed and kept her end of the deal, and was dried, with teeth and hair brushed without any disagreements.  Hurrah!

Ian read her her bedtime stories, and with the promised that I would come back after I’d made and eaten our supper, she was pretty good at settling.  I came out to cook our salmon curry, and once Ian had left the room, all was silent.  Then twenty minutes later, a quiet “Mummy?!” was called out…  I checked on her and she asked if I was still eating my tea.  I said that I’d just about finished and I would cuddle her for five minutes.  I counted down each minute and amazingly, when her time was up, she released her grip on me and I left.  Without any tears or screams!  Yippee!!

Back in the front room, we cracked on with deciding what to do about our excursions.  Eventually, I convinced Ian that he should do the fly-cruise-fly trip to Milford Sound by himself tomorrow, and I would have Cornelia for the day and we’d go off and do some fun stuff together in Queenstown instead.  We would then all do the heli-snow plane trip at Mt Cook in a couple of days.  So, we booked all that up and finally, we have a plan!  Our last few days in New Zealand are promising to be very exciting!