Sigh, we had a bit of a ropey start to you today. Cornelia was totally off key this morning, and for reasons that we do not understand, she spent most of it being absolutely hideous and hard work. She lost her Kindle, her afternoon swim, and pretty much everything else that was on offer to her today.

Thankfully, she was being perfectly delightful when we spoke to Grandma and Grandpa, but that was about it for the morning. It was so unpleasant, that I actually went and locked myself in the bathroom just so I could have a few minutes away from her. She would not speak to Daddy at all, and was alternately being clingy or completely vile to me. Eventually, I plonked her outside and this seemed to calm her down somewhat. Once she was being bearable, we drove into the city of Christchurch and parked up.

We headed towards the tram station, via the remains of the Cathedral that was significantly damaged during the major earthquake here in 2011. Although the city is still undergoing major reconstruction, the parts that have been completed are very attractive and the city has a really positive vibe which is easy to sense. Even in the drizzle! 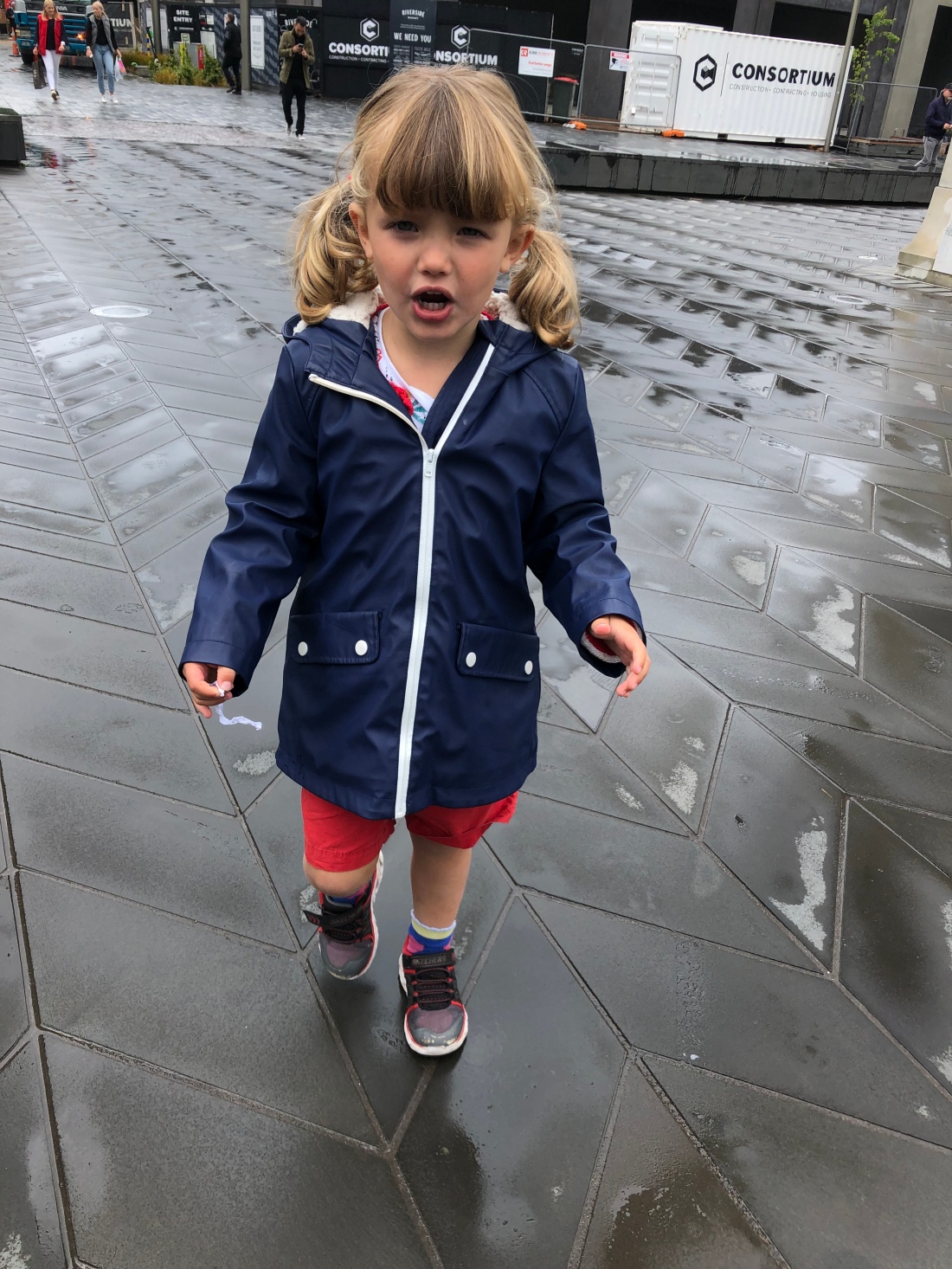 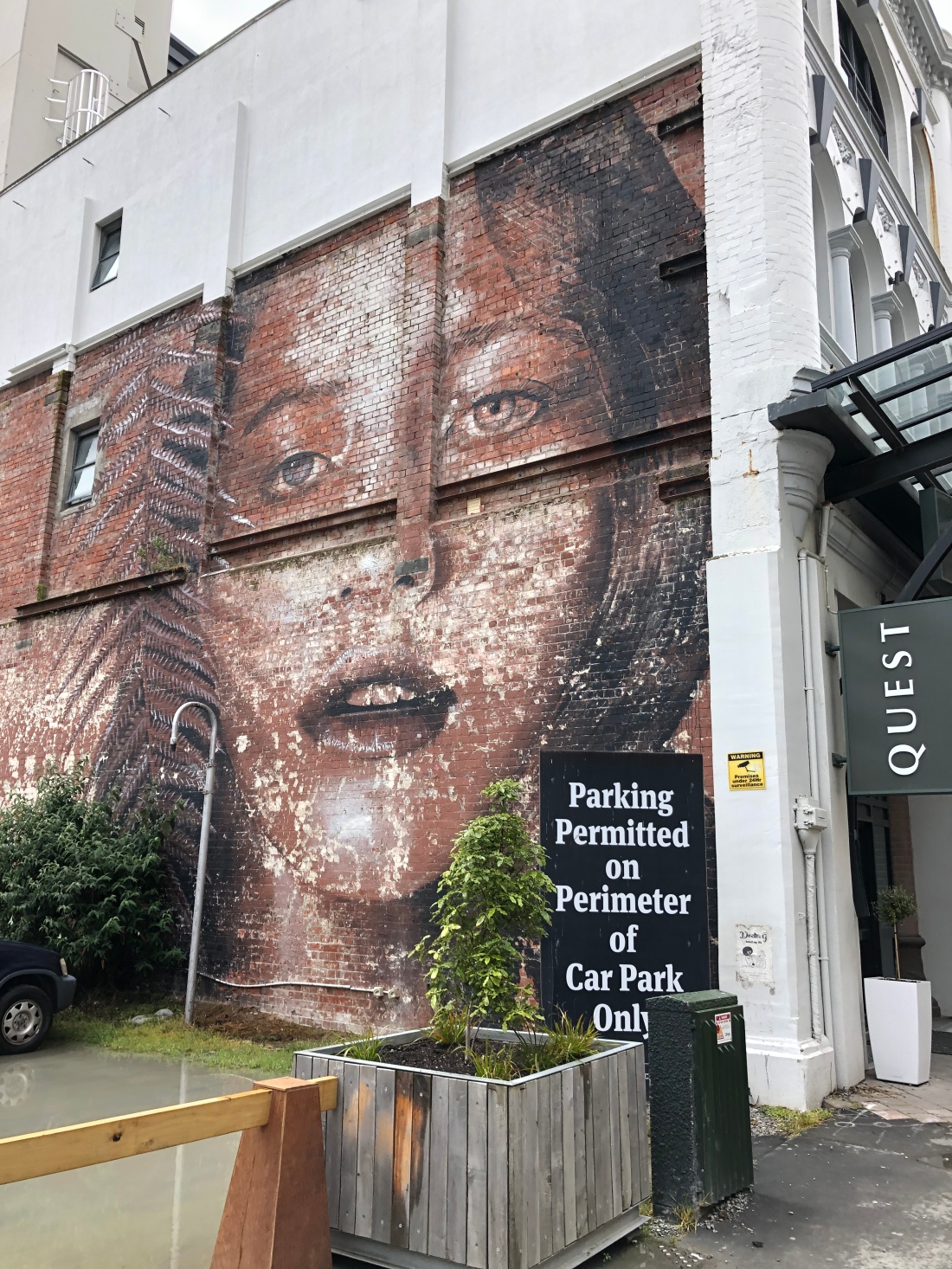 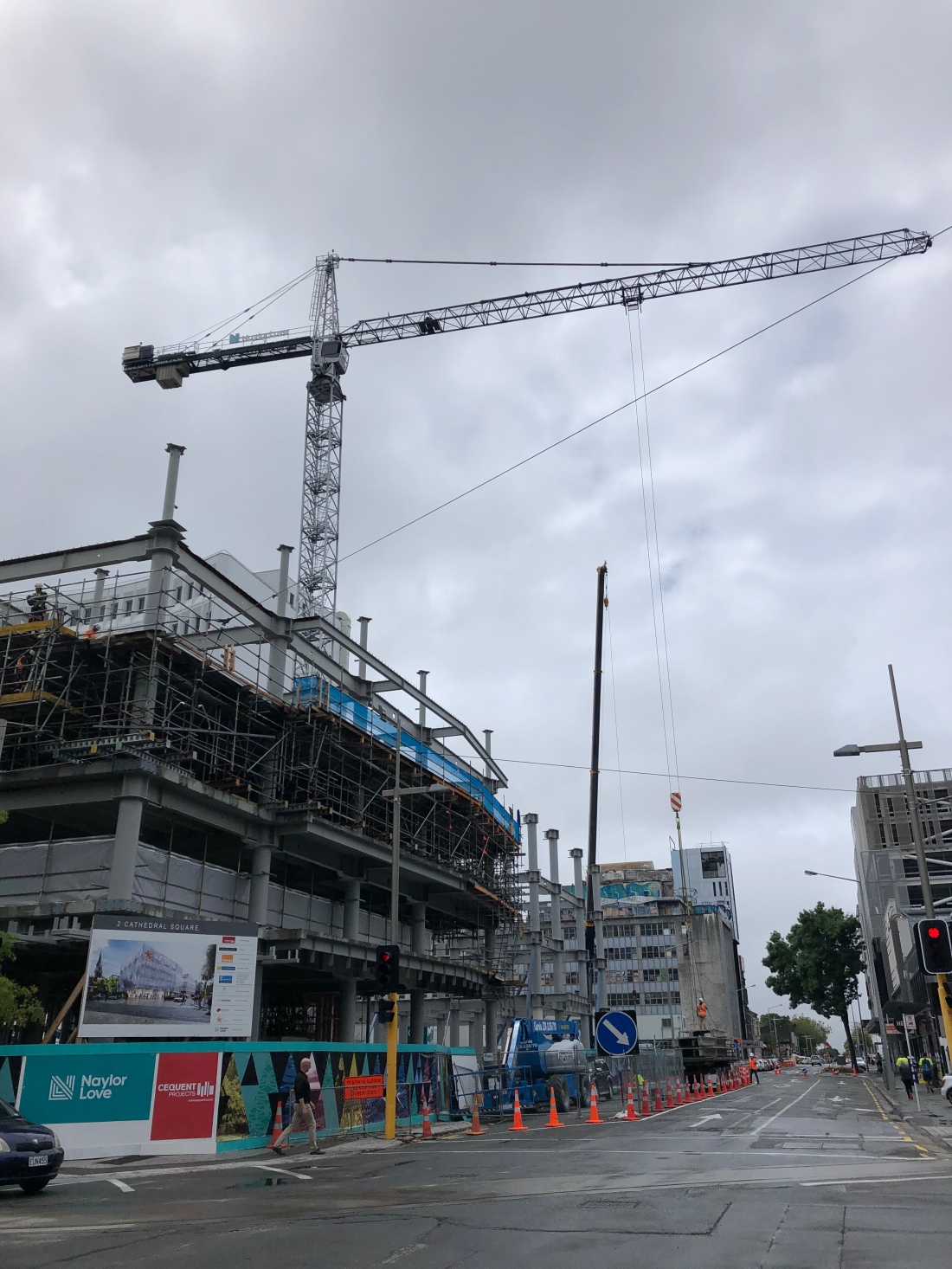 We passed the Christmas windows of Ballantynes department store, dressed with mischievous merry mice in different rooms of Dunstable House. A book called The Merry Mice of Dunstable House has been given to every primary school in Christchurch for their library, as a Christmas gift. What a lovely idea! There were mice riding on bubbles in the bathroom, making “snow” angels on the kitchen floor with hundreds & thousands, and mice pulling crackers in the dining room. It was cleverly down and was really effective. Cornelia loved it! 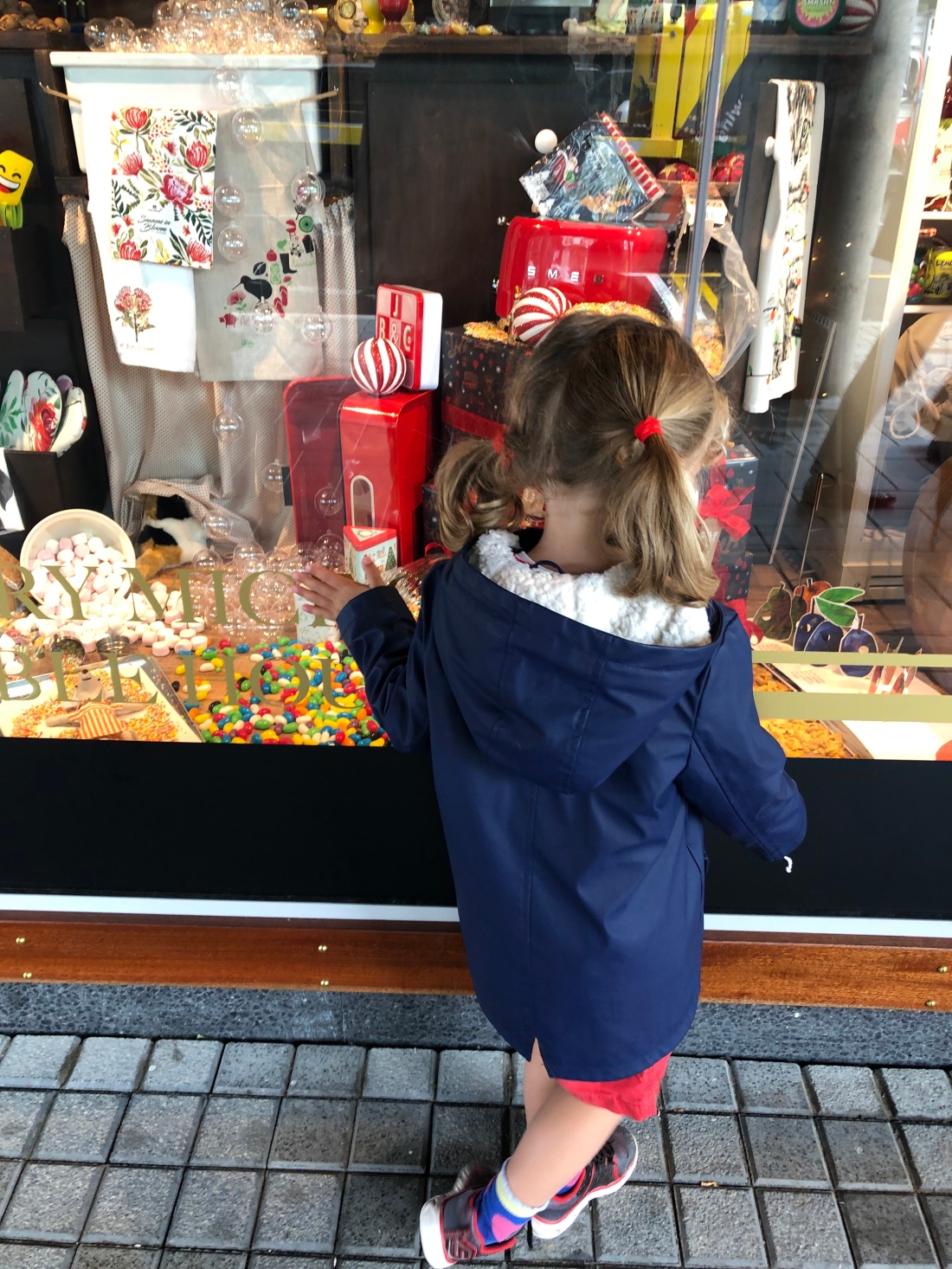 Once we’d explored each window thoroughly, we made it to the tram station, which is inside a little shopping precinct, and sat down for lunch in one of the cafés there. Ian had quiche (literally a piece of quiche on a plate), Cornelia had scrambled eggs on toast and I ordered pumpkin soup. By the time Ian had finished his quiche, I was still waiting for my soup. When I went to investigate, the man was furiously stirring it in the pan, and apologised for the delay. At least when it finally arrived, I knew it was fresh! 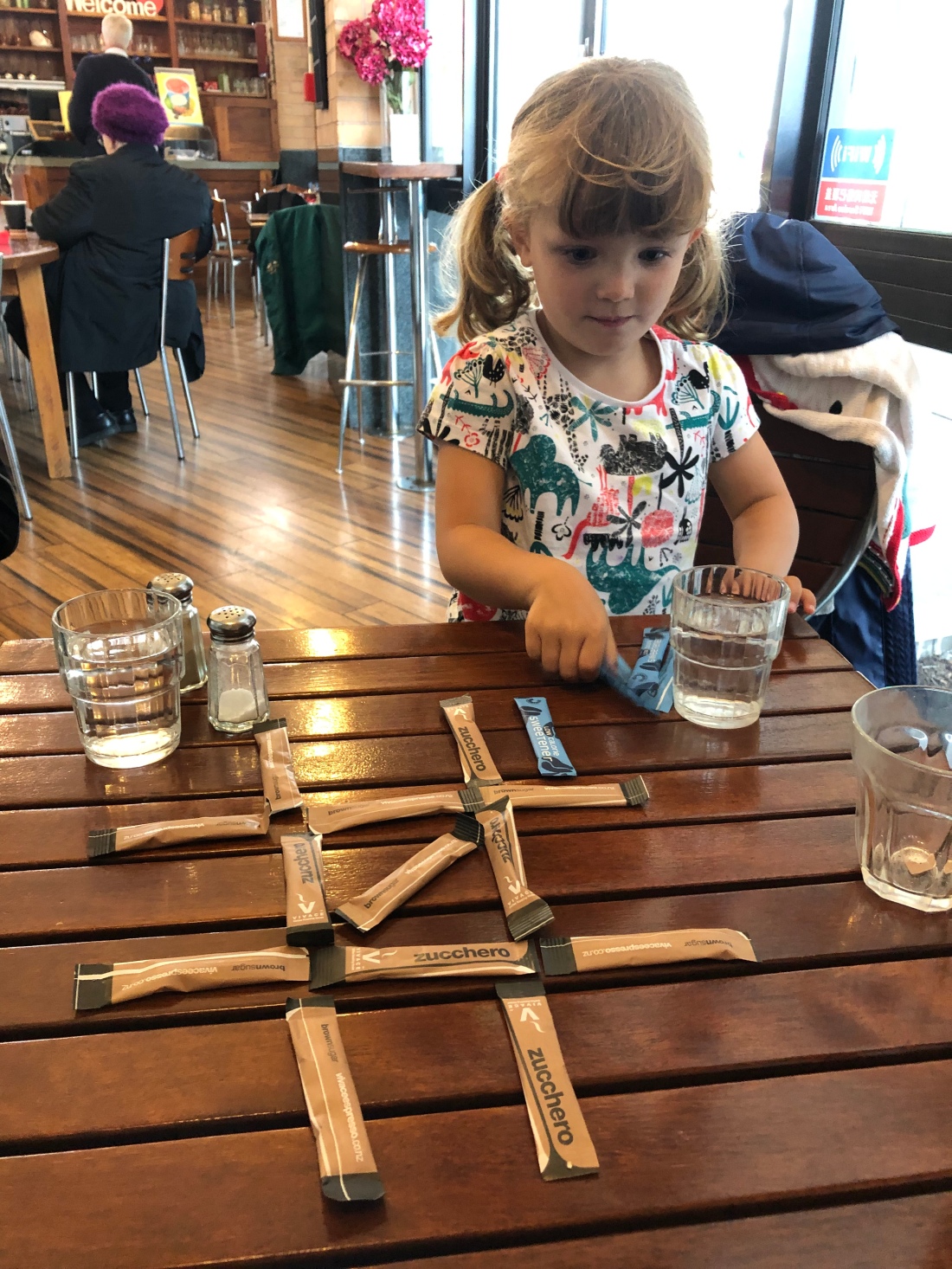 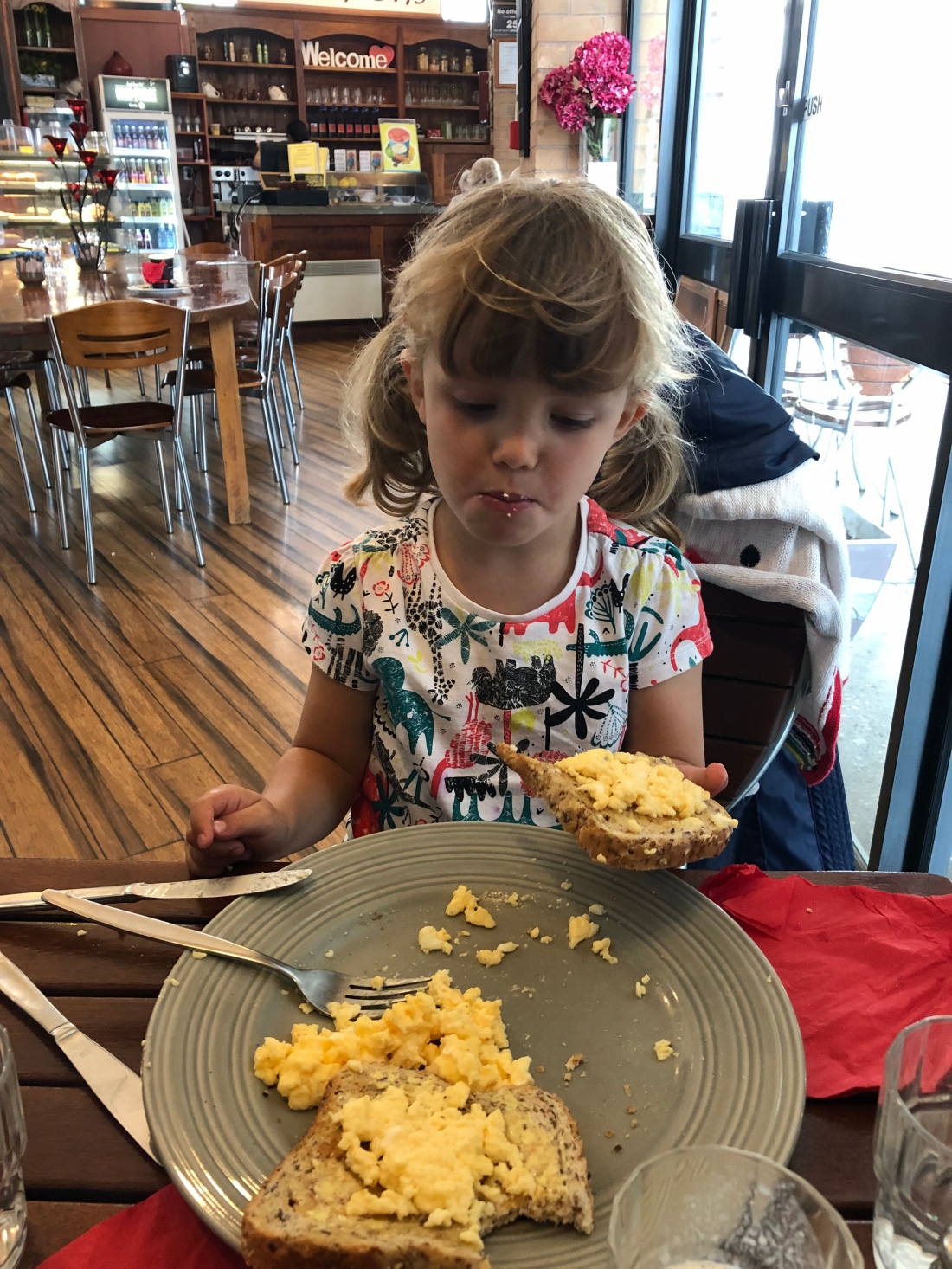 Cornelia started playing up again, demanding a dessert, but her earlier behaviour had meant there were no such treats today, so we had to deal with another public tantrum, much to the amusement of a passing police officer. Thankfully, the tram then arrived, and she immediately sorted herself out and became angelic as we boarded. Bloody kids!!!

The tram journey takes you around the city in a figure of eight, and you can get off at any one of the many stops and alight again wherever you want, and as many times as you want. It was quite chilly on board with the sides exposed, so I wrapped Cornelia up in my coat, and she lay down on me, not that interested in seeing what was around us, but at least she was patient and calm! At one point, the train driver announced that she was slightly ahead of schedule and therefore we would be hanging around for a few minutes, in case anyone wanted to get off and take photos. During this waiting period, she wandered around speaking to different passengers. When she approached me and Ian, she eyed us up and down before asking “So, is this your granddaughter?” Trying not to glare, I replied that she was in fact my daughter, to which the train driver replied “Oh, no offence meant!” With a steely smile and through gritted teeth “Only a small amount taken!” was my measured response. Gordon, the conductor made matters worse by remarking that all I needed to do was dye my hair! “Argh,” I replied. “It is deliberately coloured this way!” 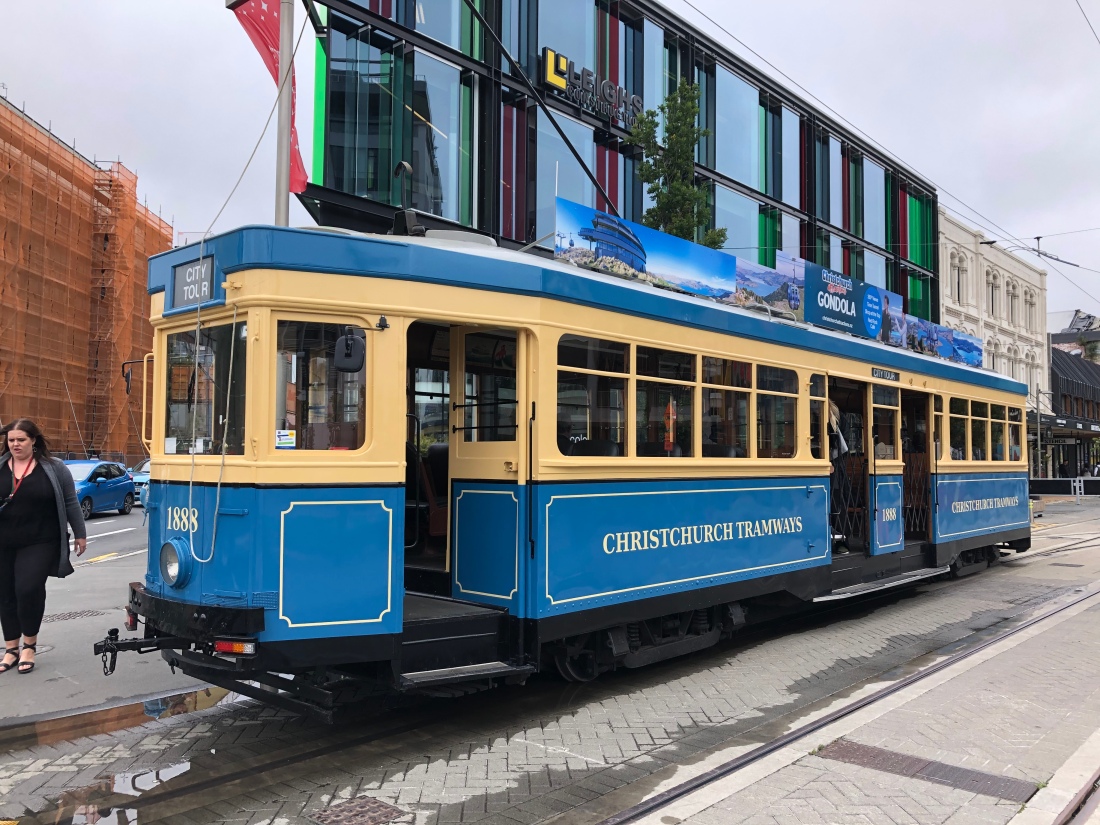 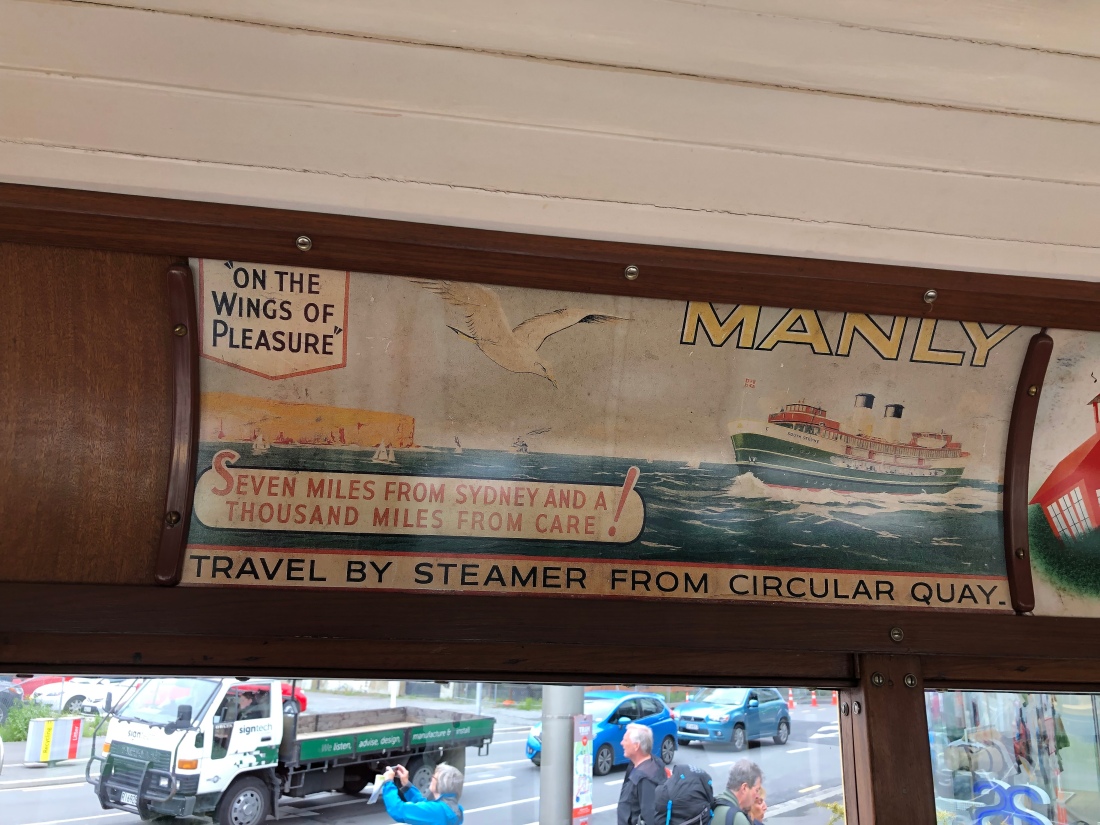 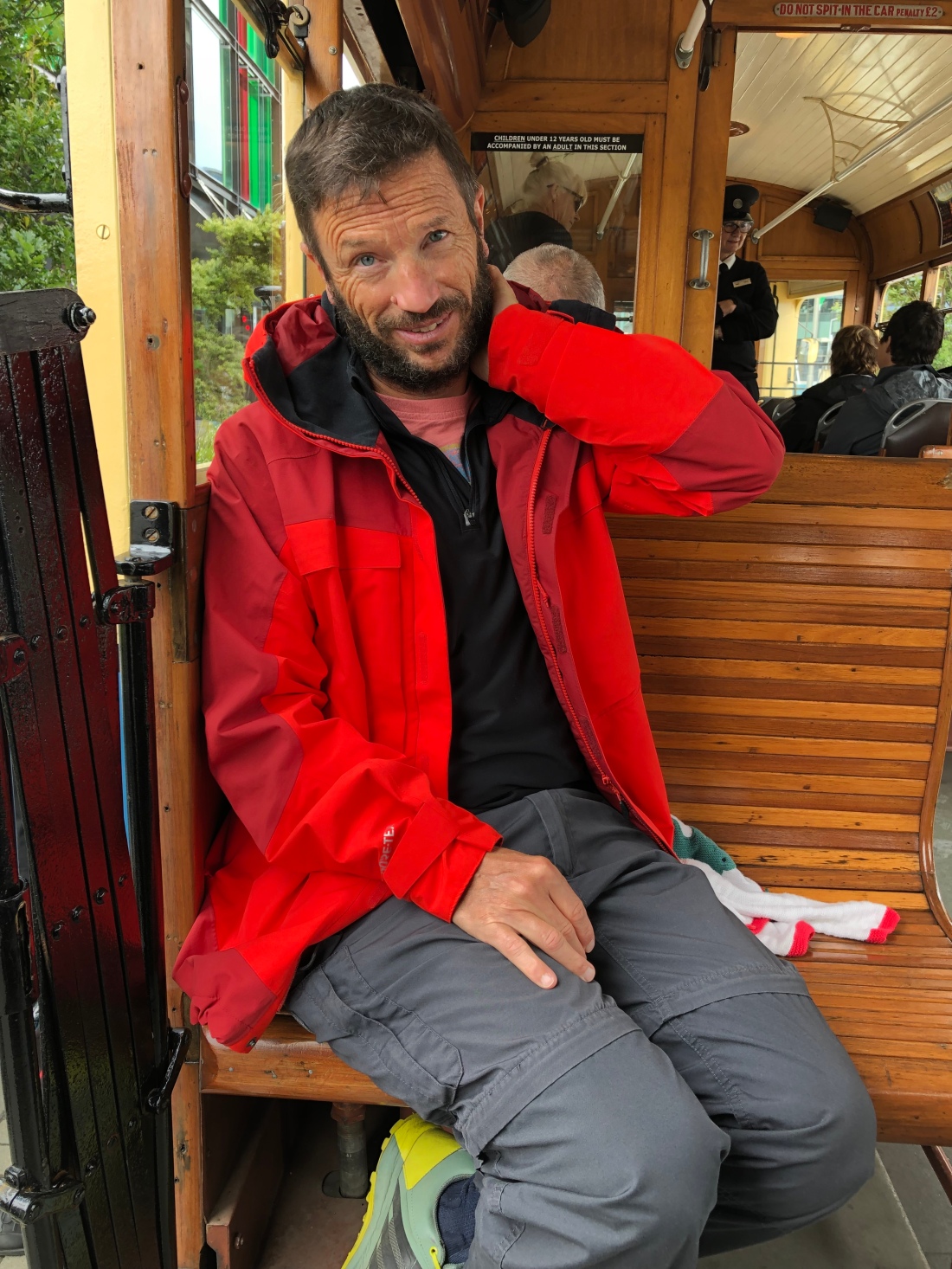 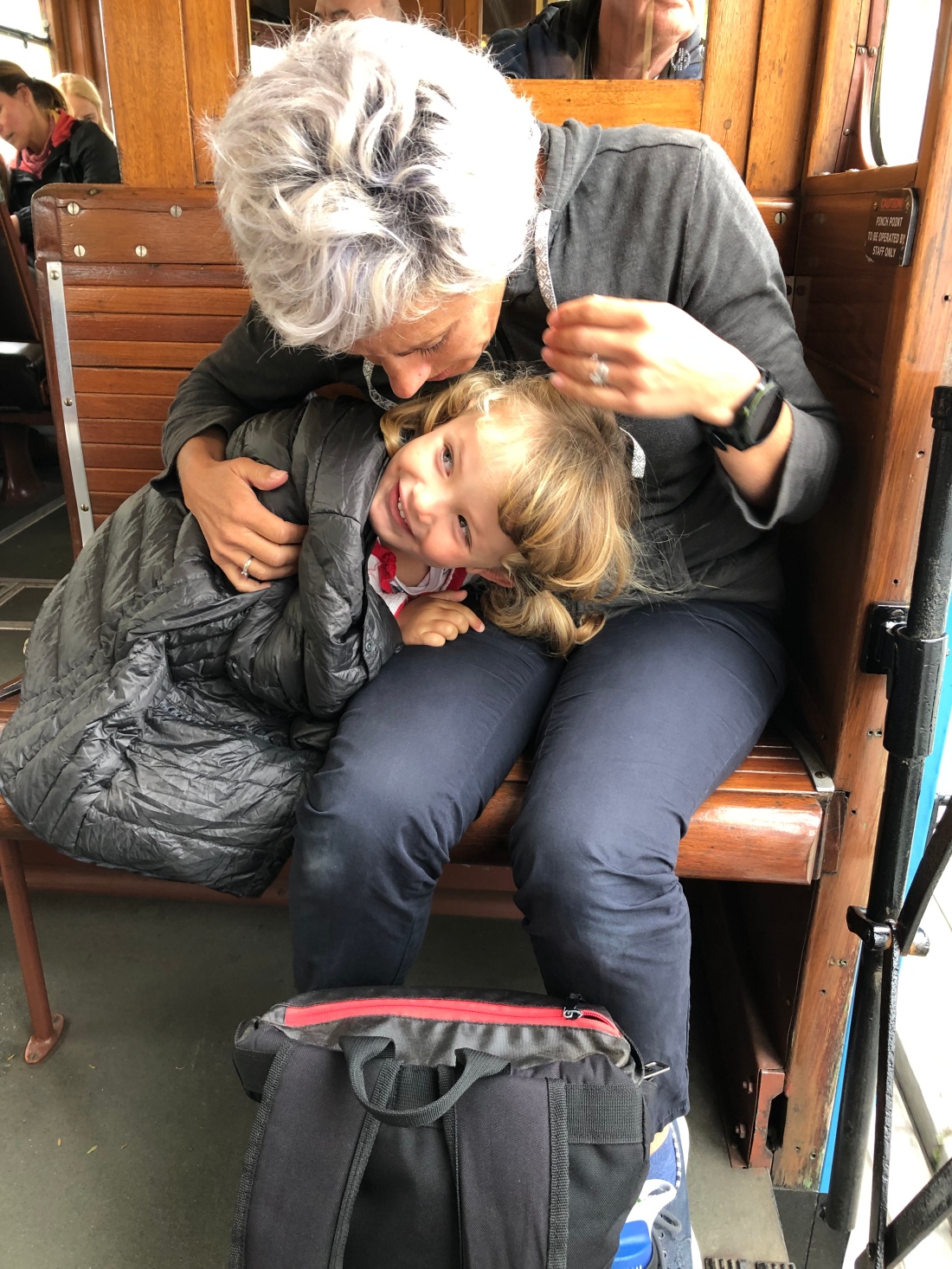 Insults over, we completed a full round of the tram’s route, before choosing the shopping area to walk around. Ian was going to visit the cardboard cathedral with Cornelia, whilst I was hoping for a browse in some of the lovely stores, but Cornelia had other ideas. She didn’t want to go anywhere with Daddy today, so insisted on coming with me, and we ended up revisiting the Christmas windows of Ballatynes for half an hour instead. When we met back up with Ian, she was still being testing, and the whole situation was not helped by the different ways Ian and I parent…!

We caught the tram again (it was a different one, so no sore feelings…!) and this time disembarked at Canterbury Museum, where earlier I’d heard Gordon say that there was a good kids’ area upstairs, and Ian & I were keen to see the Antarctic exhibition on display. I took Bugsy up to the children’s area, where she was an archaeologist (singing her archaeologist song “I’m an archaeologist, I look into history. Bones and fossils, rocks and stars, solving the mystery”) uncovering fossils and bones from the sandbox using a brush, and explored various other interactive games. Ian came to find us, and I nipped off to have a quick look at some of the exhibitions, and there was some amazing stuff: the Antarctic displays, an Egyptian mummy in her sarcophagus, and ancient Asian artefacts. It was really interesting and we would have stayed for longer but for the tired child’s enthusiasm waning.

So we decided to call it a day, and walked back to car. Cornelia made the most of the rain by jumping in puddles. At least she didn’t complain about having wet feet!! 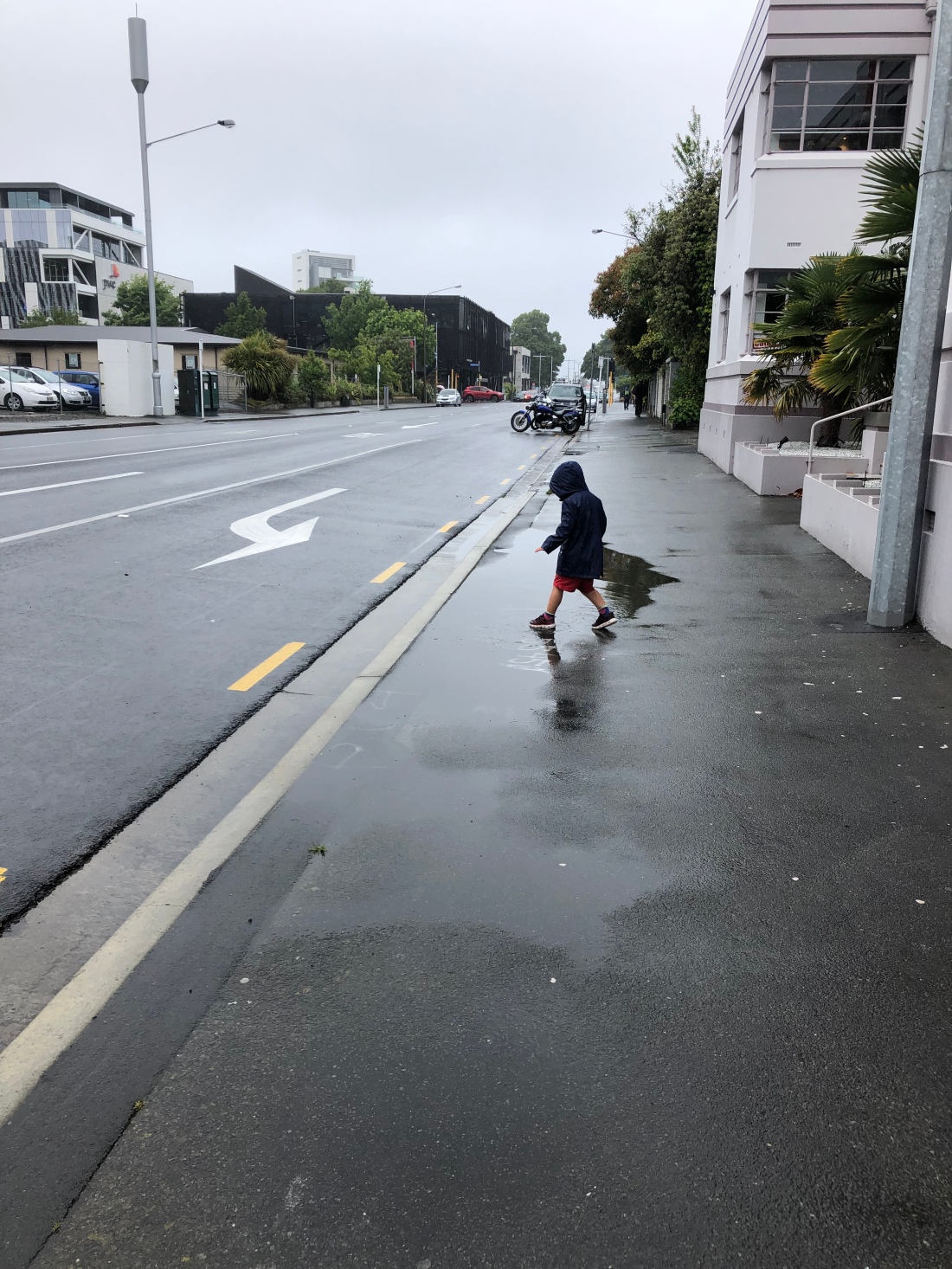 We stopped off at the supermarket for tea, which was salmon, broccoli, carrots and potatoes, and was all eaten up by everyone. Winner! Ian nipped off to reception for some emergency beers, while I put our tired girl to bed. After a cuddle she was asleep by 20:00. Phew!