Bugsy woke up in a lovely cheery mood, having cuddles with us before asking it we could all just get up and start our day.  Ian showered, while I dressed Cornelia and played with her before we all had breakfast together.  After we’d eaten, Cornelia and Ian went to return Beauty & the Beast while I had my shower.  She returned with another DVD (Pete’s Dragon) and an activity bag with loads of new stuff for her to do, which kept her occupied while I did my usual updating of expenses and other life admin.

Tabatha, one of the housekeepers/reception staff, came up to check that all was okay following our flood last night, and to tidy up anything that needed to be done.  She was relieved (I imagine) to find that we’d cleaned and dried everything, and put it all away.  Apart from the swollen shelves, you’d never know that anything had happened!

We sorted ourselves out for the day, and walked into town again, with plenty of time before the dolphin cruise we had booked would start.  Ian and I both fancied a coffee, and Cornelia’s great behaviour yesterday had earned her a chocolate milk this morning, which she demolished in seconds (once she’d blown bubbles into it to froth it up a bit).  After a quick visit to the restrooms, we went into the excursions shop (which handily doubled as a souvenir shop), to check in, and were redirected to the end of the jetty, shortly after which our boat arrived to collect us bang on 12:40.

On board, we were secretly pleased to discover only two other sets of people on board: a couple of girls travelling together; and a German lady who lives in Auckland, with her two brothers who were over visiting her.  Graeme, our skipper, outlined the four hour boat trip to us, explaining that the waters were quite choppy (he was right about that!) but that they’d seen a large pod this morning, so would go and see if they were still in the same bay first, and if not, we would cruise around the various bays to see if we could spot them.  The pod they’d seen this morning had juveniles with them, so the guests were unable to swim with them, but I was really hoping that we would be able to get in the water.  (You’re not allowed to touch them, you just swim around them, and the staff say that if the dolphins are not in the mood, they will simply swim away, and the boat would not follow them.)  Cornelia was given an activity sheet to complete, which she absolutely loved, while Ian and I helped keep a look out for dolphin shapes.

We were in luck!  About an hour into the trip, Graeme was given the news by a nearby friendly yacht, that they had eyes on a pod, so he cruised us on over there, and we were rewarded to a fabulous display of friendly dolphins swimming and playing around our boat.  We were able to sit on the front of the boat and really be close to them, watching them for a good twenty minutes before it was time to give them a rest.  Even Cornelia managed to tear herself away from her wordsearch to admire them.  Her hilarious remark of the day was “The difference between dolphins and whales is that whales have much grumpier mouths.  Dolphins smile.”  Too much Disney???!!!

She sat on my lap, wrapped up in a towel, laughing and loving the dolphins,  until we moved on, and back inside.  The sides of the boat were open, so she kept the towel wrapped around her until we pulled into the green waters of Otehei Bay to stretch our legs for ten minutes. This is a beautiful little area, and although we were there for literally ten minutes, we managed to run down the jetty, past the stingray which was just swimming out, and onto the beach, where Cornelia found an enormous leaf (or flag, if you will), and a small red leaf shaped like a pair of lips.  We assumed it wasn’t poisonous as we all took turns to “wear” them…!

We moved on again, in search of more dolphins, but it was fairly obvious that we were unlikely to find any more, never mind have time to swim with them.  We will have to leave that experience until we get to Australia, I think.  Nevertheless, we had a wonderful trip around the Bay of Islands, where the colours and shapes of the rocks and the sea water is absolutely outstanding.  Despite being very friendly, Jake and Pertina, the two crew members, were not really on the look out for dolphins, spending most of the time chatting to each other, or on the phone sending/receiving messages.  Not once did I see them pick up the binoculars to check, and this was slightly annoying, seeing as it is literally their job to hunt for them!  They were lovely though, so it tempered our irritation!

We were returned safely to Russell Wharf, just as the clouds started covering the sunshine that we’d been lucky enough to have shining for most of the boat trip.  Cornelia and Ian started walking home while I went back to the excursion shop for our partial refund (for being unable to swim with the dolphins) and took the opportunity to do yet more Christmas shopping.  It was just a t-shirt for Ian, but they didn’t have it in his size, but could have it in by the morning.  So, somehow, I’m going to have to get him down there, and get the t-shirt on him, without him seeing the design.  My guess is that he’ll have worked out it’s a t-shirt pretty much immediately though…

We had a cup of tea back at the unit, accompanied by a pair of curious and friendly ducks on our deck, before I went out for a second run, which I’d been looking forward to all day.  I did the same route as I had previously, only stopping once to take photos this time, and able to admire the beautiful vista all over again.  When I returned, I discovered poor Bugsy in tears at Pete’s Dragon.  Oh bless her, it makes me want to cry when I see her like this!  She was deeply upset that the dragon had been shot, and that Pete had been taken away.  Ian was trying to reassure her that it would all come right in the end, but she kept asking “But how do you know that, Daddy?  How do you know?!” On the plus side, I had gorgeous great big cuddles with my sobbing daughter, clinging on to me with real fat tears rolling down her cheeks. 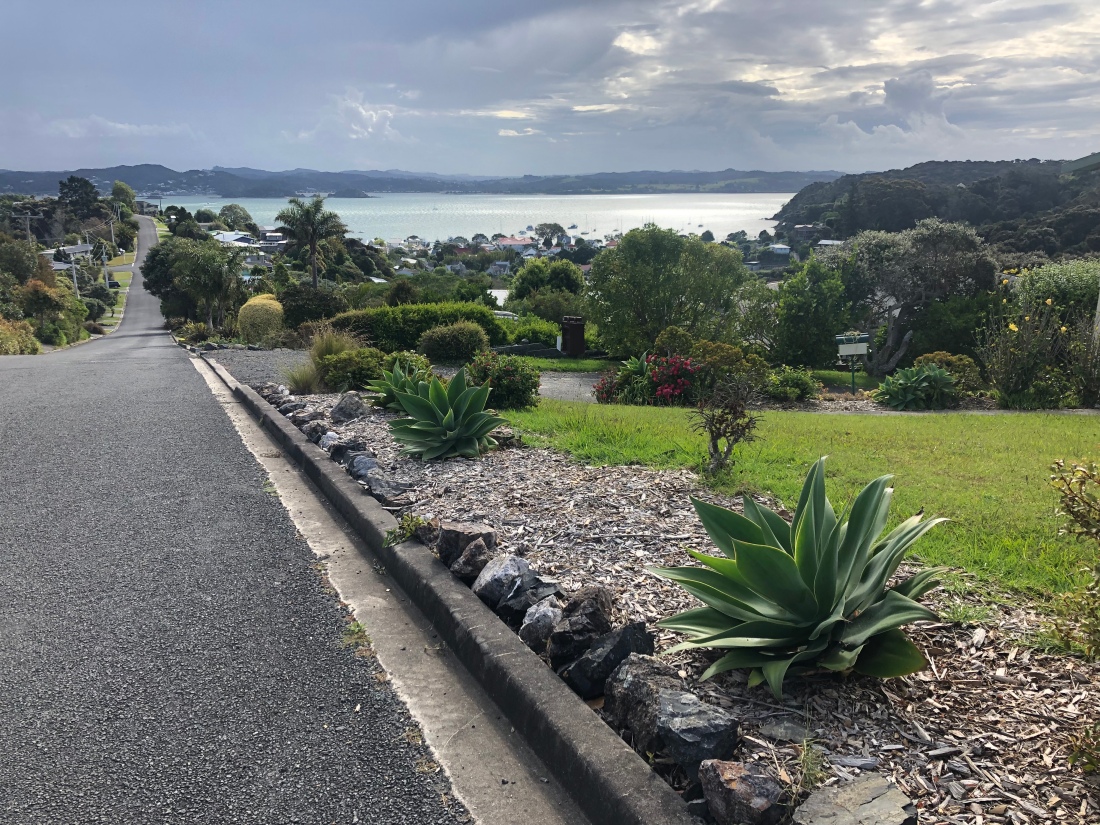 Once that distress had passed, and the dragon and everyone lived happily ever after, I cooked tea – chicken curry for me & Ian, chicken, potatoes and broccoli for Bugsy.  She asked to try a bit of my curry and absolutely loved it, which completely surprised me, as she thinks toothpaste is spicy, never mind a tikka masala…!   After we’d scoffed our meal, Cornelia and I had a shower to get rid of my sweat, and her sea-saltiness, and all was going perfectly, until she managed to trap her fingers in the bathroom door, moments after I’d said “Don’t play with the door like that, or you may trap your fingers” and the tears started all over again, partly from pain and partly from feeling silly that she’d ignored my wise mummy advice.  We iced her finger, which cheered her up, and she had her bedtime stories, holding an ice cube wrapped in kitchen roll against her fingertip.  She didn’t argue when I said that she needed to give me the ice cube for the night, and that she could have it back in the morning if it was still sore, and as she fell asleep, I rewarded myself for my run by rehydrating and refuelling with gin, chocolate and more gin…

2 thoughts on “Dolphins and dragons”