The weather was due to be terrible today, so when we woke and found the sun shining, we were keen to spend what time we could outside.  This meant a quick breakfast before we started the treasure hunt that had been given to us when we arrived. 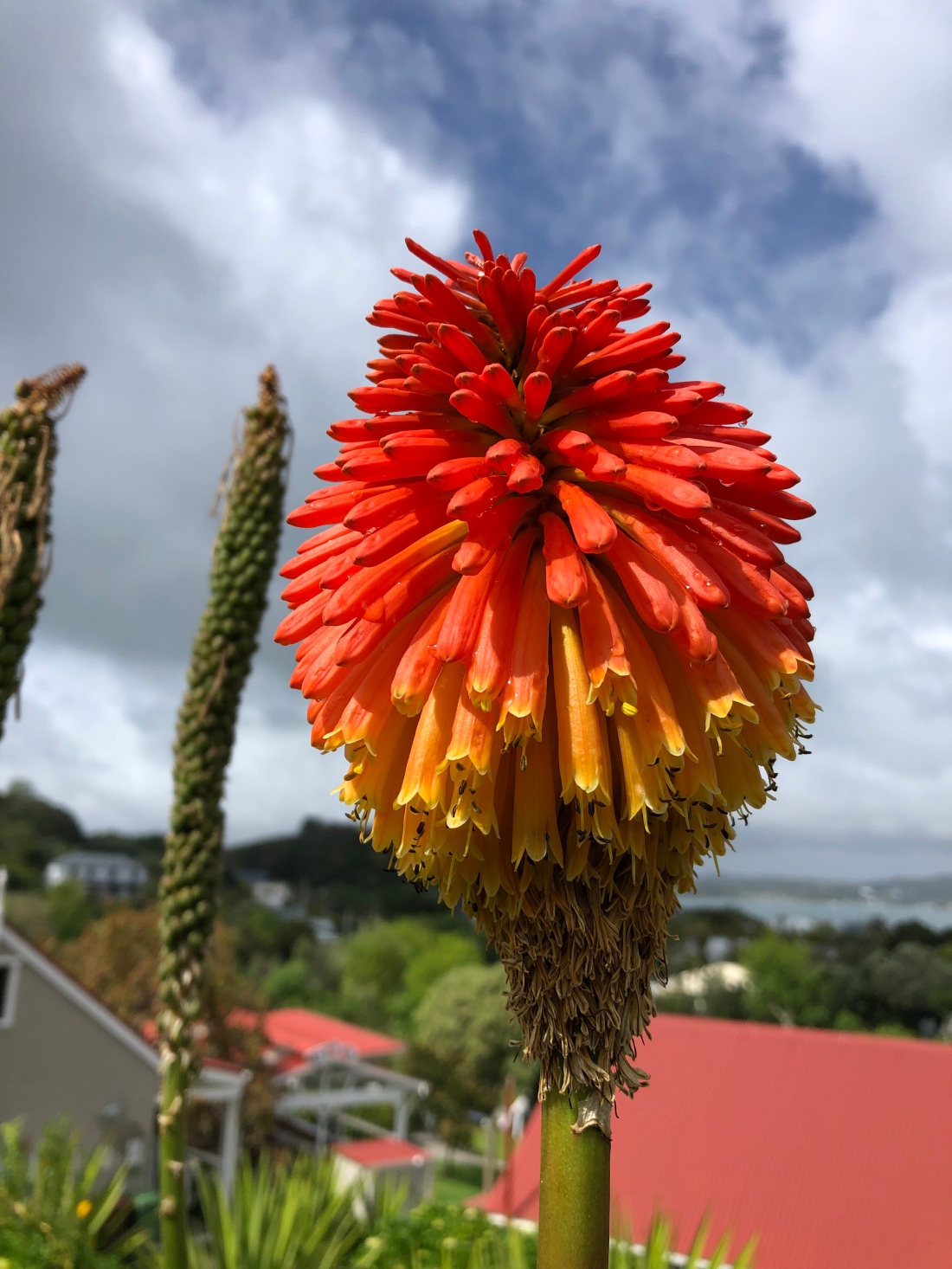 Halfway through, the clues took us down to the playpark, where we met a lovely couple and their young daughter, Millie.  Naomi and Neil used to run this Top 10 campsite, and had also just been travelling for a bit, helpfully around Asia, so could make loads of good suggestions for us, for our final few weeks in January.  The treasure hunt came to a bit of a halt, as Cornelia wanted to play, and I wanted to chat, so it worked out perfectly, but eventually the time came for us to go our separate ways.  They were off into town (where they lived) for lunch, and we had plans to finish the treasure hunt, then head into town for some lunch too. 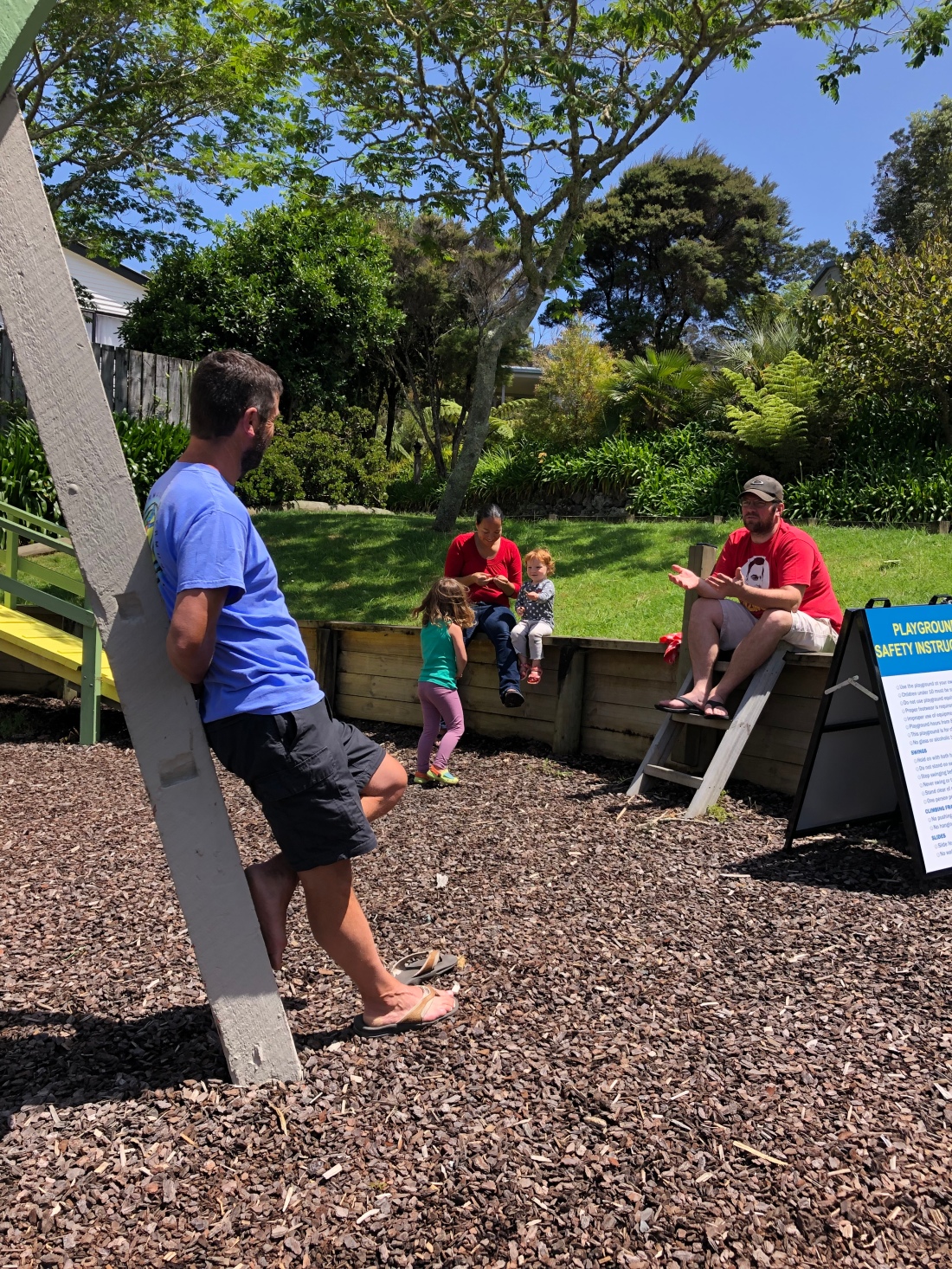 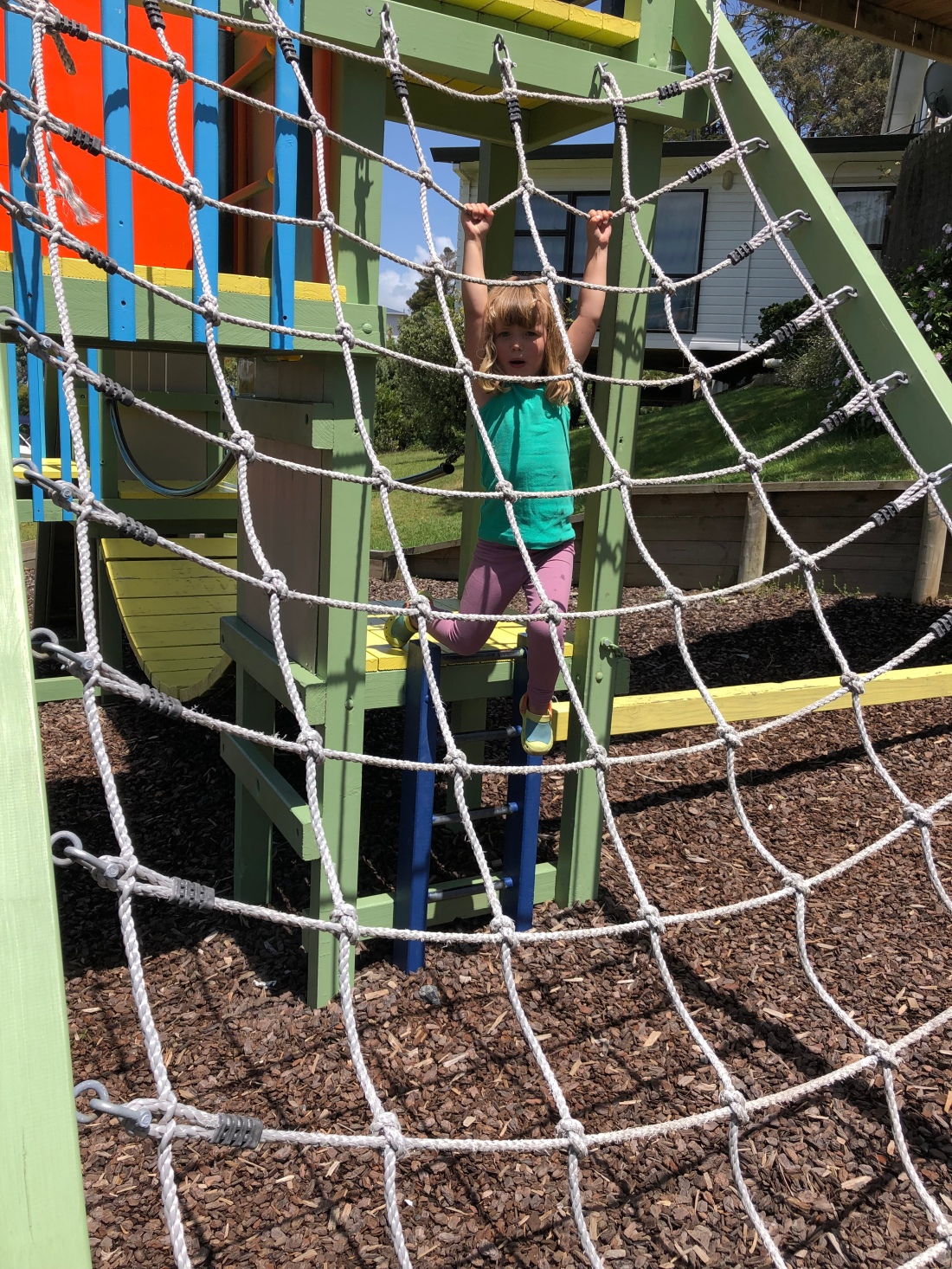 We walked the short distance into the town and walked along the waterfront, stopping to play on the rope swing on the beach, before selecting “Butterfish” as our lunch venue.  I had a delicious tomato stuffed with quinoa and ratatouille (it was nicer than it sounds, I promise!), Ian had a lamb & brie sandwich (again, nicer than it sounds!) and Cornelia had her first lot of mac ‘n’ cheese fingers, which are basically deep-fried sticks of macaroni cheese.  (There wasn’t much else on the menu that she would’ve eaten.)  It turns out, she absolutely loves them, and I’m not sure how thrilled I am about that!  Ian bought the drinks, and came back with the water that Cornelia had ordered… a limited edition bottle to “celebrate the World’s Best Sparkling Water 2018”.  Notwithstanding the fact that she’d asked for plain water, I couldn’t quite believe he’d bought it!  (Bear in mind, he’s the sort of person who would get a glass of tap water and blow bubbles in it to make it look fizzy….) 😂

As Cornelia had eaten all of her lunch so nicely, and as it was unexpectedly still sunny and warm, we went off to find a gelaterie around the corner.  Bugsy had her usual chocolate (except this time it was triple chocolate) and I asked the guy to choose one for me, and ended up with an amazing Black Doris Plum and Creme Fraiche. Yum yum.

Once we’d polished those off, I nipped off to the nearby supermarket for bolognese ingredients, while Cornelia played on the rope swing again, and devised a new game where you had to catch the rope with a stick before your opponent…

Back at the campsite, Ian continued the treasure hunt with Cornelia.  They came back with it all completed, bar the last clue – number 10.  Ian repeated what the clue on the bollard had said, but neither of us could reconcile it with the answer Cornelia needed to give to reception in order to win her prize.  The demand was “What is Toppy’s secret passcode?” but the clue simply stated that “Toppy’s secret fact is that he is the fourth largest in the world.”  To me it was glaringly obvious that it was a mistake, but it totally baffled my logical husband who was infuriated by it all.  On the basis that you probably don’t need to overthink a kid’s treasure hunt, I took Cornelia down to reception to claim her chocolate and lollipop.  Sigh…. couldn’t it have been a small toy of some description, instead of sweets?!  She scoffed her chocolate, but I held on to the lollipop, knowing full well what that sugar would do to her mood if she ate that too!  Then we went straight back to the playpark for her to run it all off! 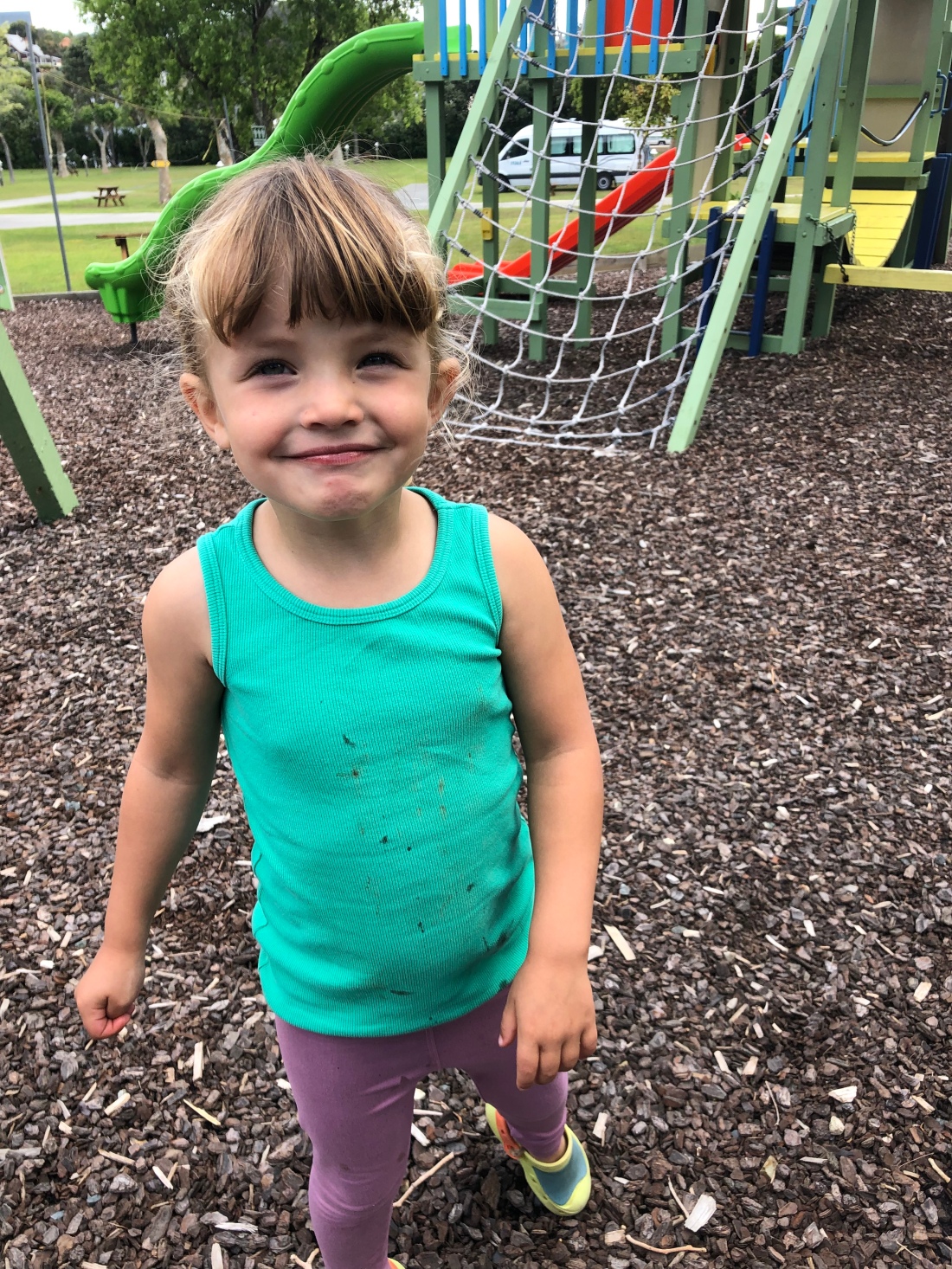 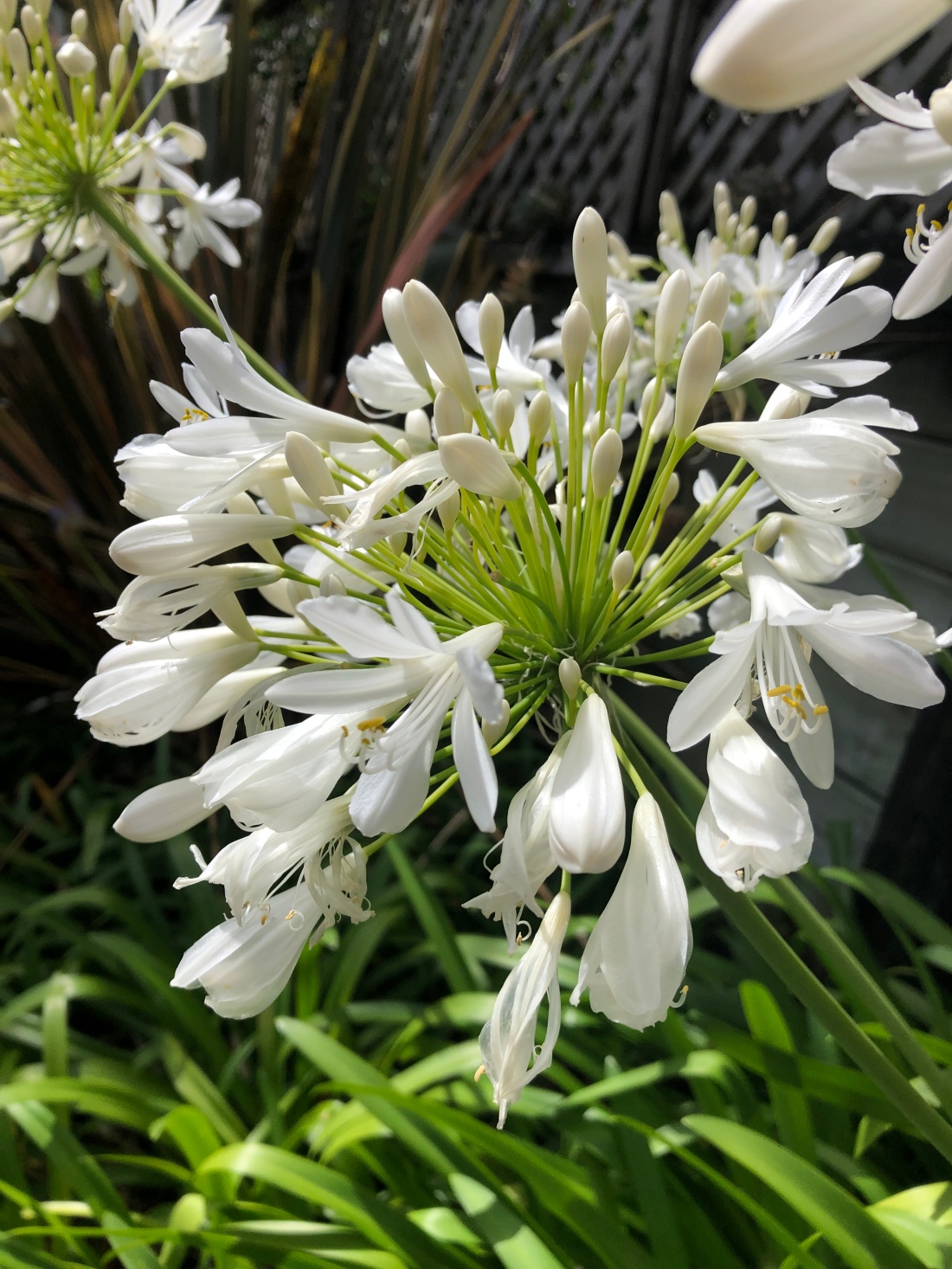 Cornelia had chosen the movie Beauty & the Beast so, as the rain arrived, we went back to our unit and watched that, while I cooked supper.  She was terrified in parts, as we thought she would be, and she was very funny – hiding in our bedroom, sitting on top of Ian, or just covering her ears and closing her eyes.  She found it all quite confusing, I think, and it was probably a bit too grown up for her, but despite us telling her this when she was choosing, she wanted it nonetheless. 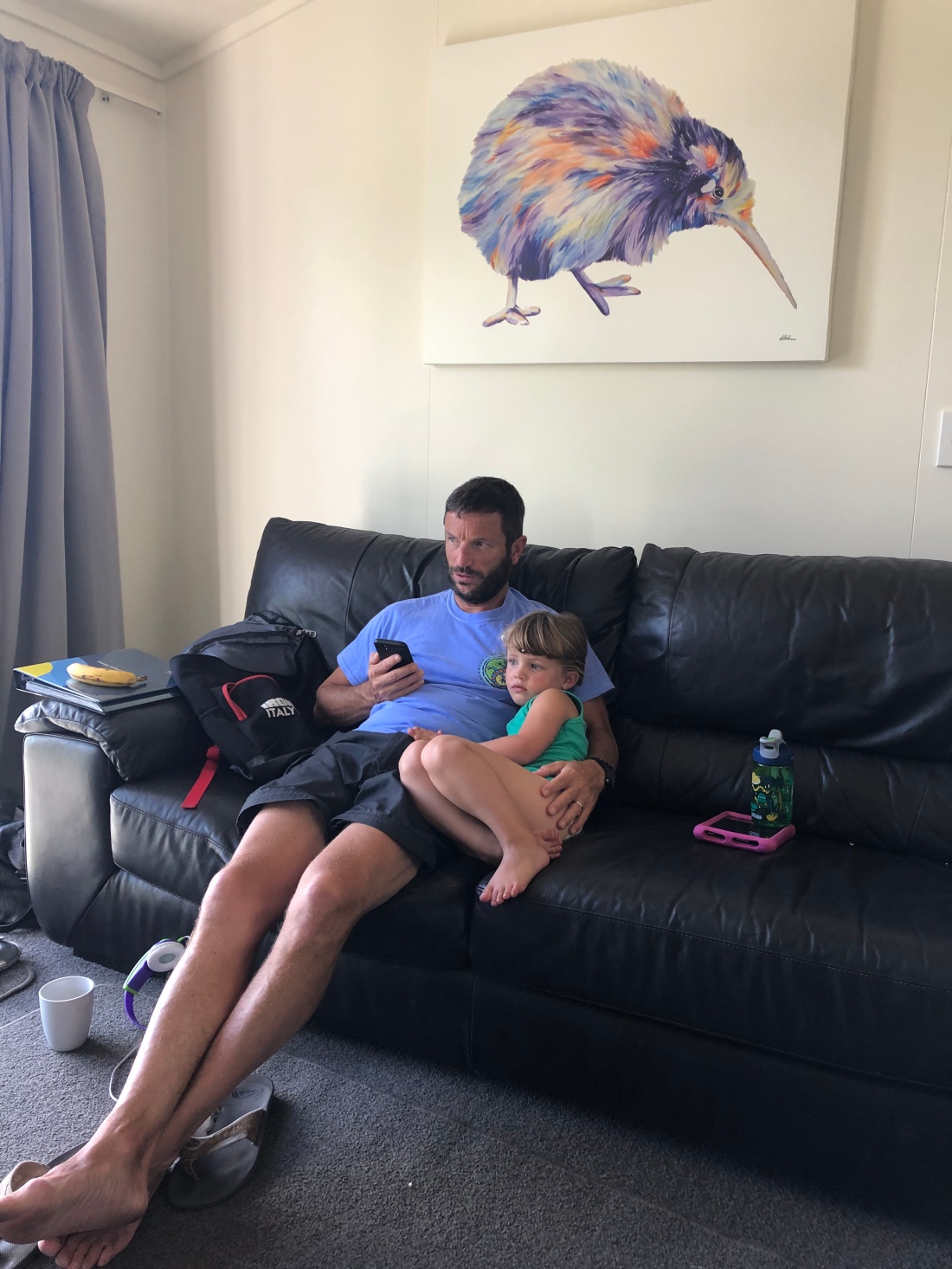 Tea was uneventful – tasty, as always (of course!) – but just as Ian went to wash up, we heard a sudden rush of high-powered water.  For a moment, we thought it was someone with a powerhose outside, until we realised that water was pouring out from underneath the sink.  We opened the door and WHOOSH!  Water jetted out at top speed covering Ian, and flooding the floor in seconds.  I grabbed all of our bath towels and threw them on the floor, while Ian wrapped his hand around the sheared pipe.  I legged it down to reception to report it (thankfully, it was still open!) then ran back up the hill to Ian, who was still securing the pipe with his hand, occasionally swapping over and getting a drenching each time he released it!  I hunted around inside and outside for the stopcock, but couldn’t find it.  Wayne, the maintenance manager, arrived within a few minutes.  But unfortunately, he had only started a few weeks ago, and the main guy was on holiday and completely out of contact.  I asked if they had a maintenance folder for each unit, and he laughed (sort of) and said they’d only just had the conversation a few days ago about getting a manual written up.  So, he also had no idea where the stopcock was.  Poor old Ian was starting to seize up from gripping for so long (it had been about 20 minutes now and he was crouched on the wet floor, half inside the cupboard under the sink – honestly, I wish I’d taken a photo…), as Wayne and I continued digging around the outside of the cabin hunting for the stopcock.  Finally, Wayne found it.  Hurrah!!!

Once the water had been stopped, Wayne had a look, and amazingly, had a new pipe in his collection, that he could use to replace the severed one.  It only took him about fifteen minutes to sort, after which he collected some fresh towels for us, and took the old ones away.  Neither Ian nor I could face the washing up after that, remarking “Well, that was exciting, wasn’t it?!” to which our ridiculous toddler (looking up from her Kindle) said “What was exciting?!”.  So, despite the high drama of the last half an hour, and the kitchen being completely flooded, she had not noticed a single thing out of the ordinary, such was her focus on the nursery rhymes she’d been watching and singing along to on her Kindle.

Peace was restored, despite my minor upset that all of this had happened while the finale of Australian Ninja Warrior was on.  Cornelia went to bed beautifully, exhausted by a day of running around and mission accomplished, I enjoyed a couple of large gins, and caught up on Masterchef instead, as the sun set over the sea again.  What a gorgeous day!

One thought on “Flood!”