This morning’s fun was marred by discovering that the ongoing horrible smell in our bathroom is because the loo leaks. There was wee all over the bathroom floor, and we spent over an hour cleaning it up, and scrubbing everything clean. And still it smelled.

I cheered my nose up by putting on a load of laundry, while Ian had the worst job of scooping up wee from the cassette holder that had somehow escaped from the cassette. (I started uploading the relevant photos from this episode before realising you probably wouldn’t want to see pictures of wee….! 😂)

Meanwhile, Cornelia, Victoria and Evelyn were very happy to be reunited and they played up in Bugsy’s bed for a while, then watched some Peppa Pig (all grunting in unison at the appropriate places!) before asking if they could go down to the beach again. I didn’t mind in the slightest, although I was conscious that Kirsty and her family may have wanted to get going. However, I needn’t have worried – they were totally up for another trip to the beach, with a similar approach to me, that everything is washable and durable, including sandy children!

They had a great time again, digging up the sand, collecting shells and hunting for sticks, until it was finally time to say goodbye for good. As with all of our new friends, it was sad to say goodbye, especially as we had spent so little time together, but it is brilliant for Cornelia’s social skills! She has to learn how to befriend, play with, not upset, and say goodbye all in a very short timescale! She’s better at it than I am now! 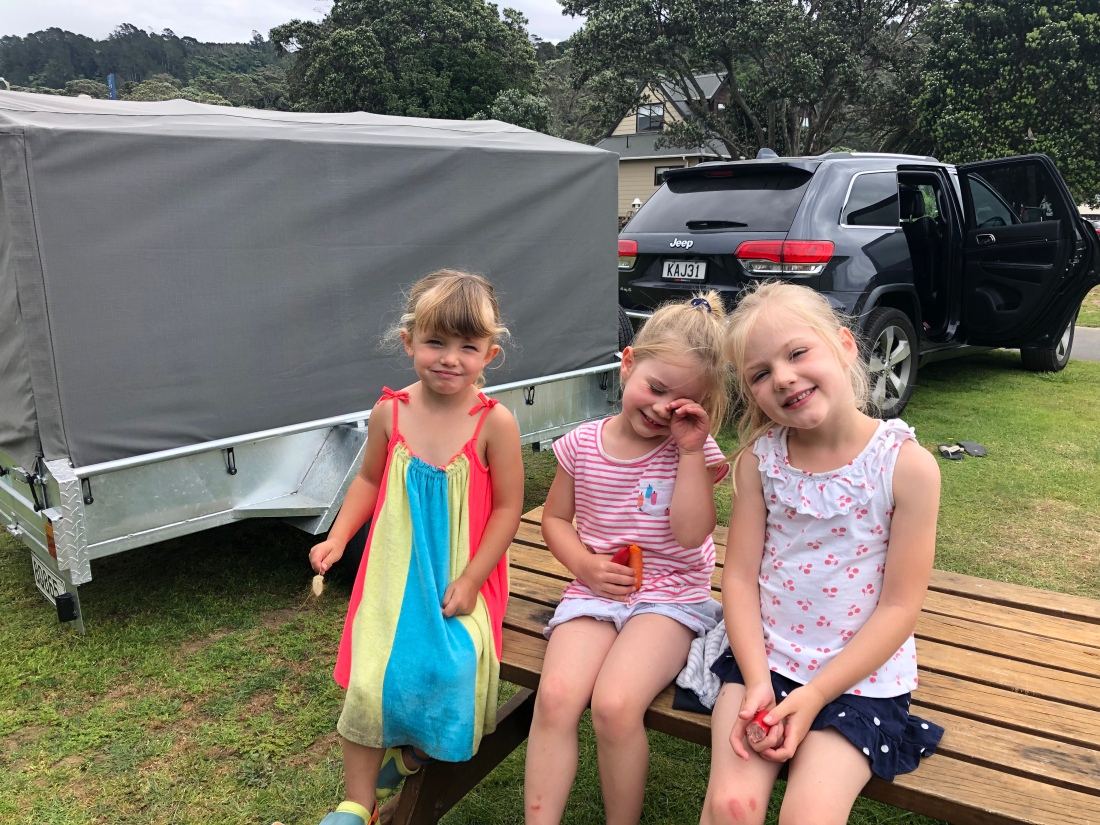 I had to whiz off too, as I’d made a “beauty” appointment with a girl called Rebecca, who was about a ten minute walk away. I disappeared, leaving Ian to entertain Cornelia while I relaxed (sort of!) in Rebecca’s capable hands. Unfortunately, my credit card wouldn’t work with her machine, so I promised that I would return later that day with some cash to settle my bill! Thankfully, she was very trusting. 😬

I had a lovely walk back along the beach to our campsite, where Bugsy and Ian were ready for lunch. The Flat White Cafe had been recommended to us by the ladies at reception, and it was an easy fifteen minute walk back down the beach. We found a dead puffa fish and thousands of tiny jellyfish, which marked the line of the tide. Cornelia was fascinated by them initially, but when Ian told her not to stand in them because they might sting, she freaked herself out and stood completely still waiting to be rescued, just in case they managed to get into her shoes.

Jellyfish drama over, we played “fetch” with our pretend dog, Fido, until we arrived at the cafe. Although we were seated inside, we had a terrific view over the beach and the sea, and enjoyed a good meal too: pulled lamb burger for me, fish tacos for Ian, and mini corn dogs for Cornelia. (Corn dogs are mini hot dogs covered in a batter.) Ian and I were quite happy to stare out at the sea, which was now swirling up nicely in the afternoon breeze, while Bugsy set about drying off the soggy crayons that had been lent to her, before colouring in her menu. 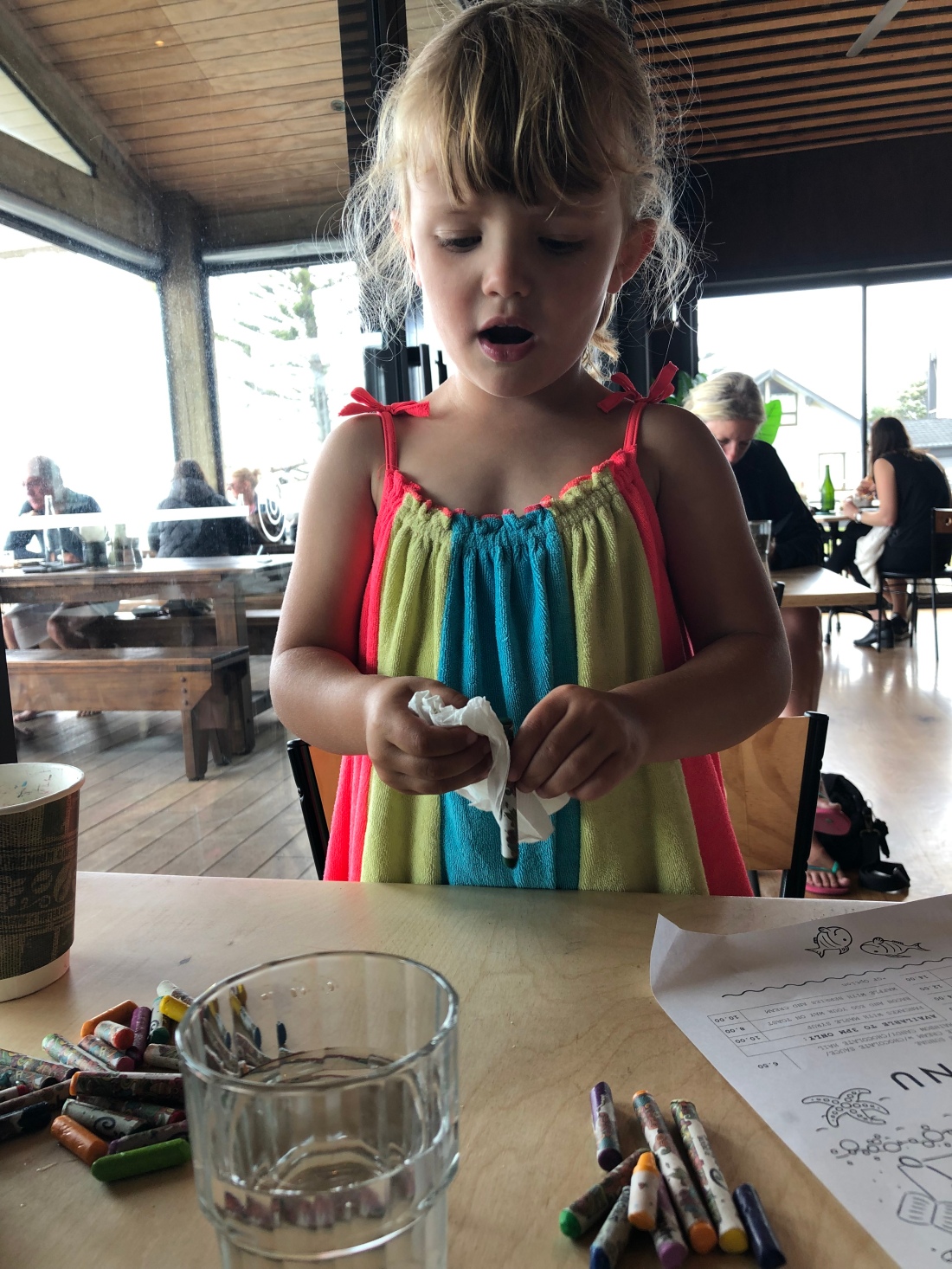 After lunch, I went to get cash from the nearby little shopping precinct, and then revisited Rebecca to pay her, and I saw Cornelia and Ian arriving on the beach by the campsite, just as I returned. We let her spend an hour or so on her Kindle while we tried to work out our time in Australia with Val over Christmas, using our painfully slow WiFi. But it looks as if we are going to be with my dear friend and her four year old daughter for the few days before Christmas, as well as spending Christmas Day and a couple of days afterwards with her. Hurrah!!

Once that was sorted, Ian offered to take Cornelia to the play park and for a swim, so that I could go for a run. I couldn’t quite decide if I wanted to run along the beach or the road, and ended up heading out of the site via the road, thinking I’d treat myself to a nice, flat run. And then I saw the sign that said “Waihi Beach Trig Trail” and I couldn’t resist. Up, up, up, into the woodland along a trail, up over 200 steps, and, having paused for breath at the top and to choose which track to take, I rounded the corner and was rewarded with THE most magnificent view. I had no idea where the trig point was, or how spectacular it would be. Totally worth the huff and puff up there! I chatted briefly to another couple of runners who had arrived while I was taking in the view (and getting my breath back…!) before bounding off down the hill all the way back to the park. What an exhilarating run!

Bugsy was bouncing on the “giant pillow” and had made some new friends, so she was quite happy, and I suggested to Ian that he should definitely go and do this run. He loved that idea, and just updated me on the current playground dynamics. Cornelia was playing with three other girls, one of whom was a bit “shovey” apparently. We observed as she did indeed seem to be taking the game they were playing a little too far, pushing the other girls quite hard! But there was one lovely girl, Kayda, a couple of years older than her, and she was so kind to Bugsy, making sure she was okay and helping her back up.

Cornelia came over to me to tell me she’d asked all the girls over to our RV, and was quite upset when I said that they couldn’t come as it meant crossing the road, and (more importantly) their parents weren’t around and there was no way I was leaving with three extra kids without their parents’ consent! Bugsy started to cry and Kayda was very sweet to her, reassuring her that it was the right thing to do.

Kayda’s mum arrived shortly afterwards with a smaller child, Haven, and I was chatting to her until it was time for them to go to the beach. Although I was totally aware that it was almost Cornelia’s bedtime and we still hadn’t even had tea, I suggested they stop by our RV on the way to the beach, and then we all went down to the beach together.

Kylie (the mum) and I sat chatting while the girls played together – getting wet and sandy all over again!

Finally, I said it was time to go, and she came with no argument, and in fact Kylie and her girls were off too, so the timing was perfect. We made a plan to swim tomorrow morning, on the basis that Cornelia had a shower, ate her tea and went to bed without delay, which she did, bless her. The only hitch in the bedtime routine was Cornelia falling into one of the sinks in the bathroom which had me in stitches and her in tears – but only for a moment, before she saw the funny side too.

As she went to sleep, she was practising saying “Kayda, Kayda” so she didn’t forget her new friend’s name in the morning!

One thought on “Saying goodbye, then saying hello.”