Ian and I were both awake by 06:00 but after a quick browse of my messages, I fell back to sleep not really waking properly until I heard that beautiful cheery “Good Morning!” She came and jumped on me a bit to convince me to get up – it worked – and we were soon all having breakfast outside again together, role-playing the Goldilocks story that has become routine now, as Cornelia is having porridge every day!

I went to wash up and heard the Ireland-NZ rugby game on in the TV room next door, so snuck my head around to watch it. Ian soon found me and we all watched the last ten minutes together. Here’s something I respect and admire about the Kiwis: As soon as the whistle blew, instead of spouting off reasons why they didn’t win or arguing that they should’ve won, they applauded Ireland and said “Good on you, Ireland, well played!” Love this spirit and attitude and sportsmanship.

We left our campsite just after 10:00, heading north east to Auntie Lizzie’s old haunt, Mt Maunganui and Tauranga, and then up the coast to Waihi Beach. I had hoped we would go to Hells Gate for a mid bath and thermal pool dip, but as I was the only one who wanted to do this, we didn’t go…

The main road to Tauranga was closed but we enjoyed a spectacular diversion up and down the winding roads that led us through various gorges before bringing us out along the coastline and to beautiful Mt Maunganui. We found Lizzie’s old house very quickly and although I tried video calling to show her where we were, it may have been a bit late in the U.K. to take a call! 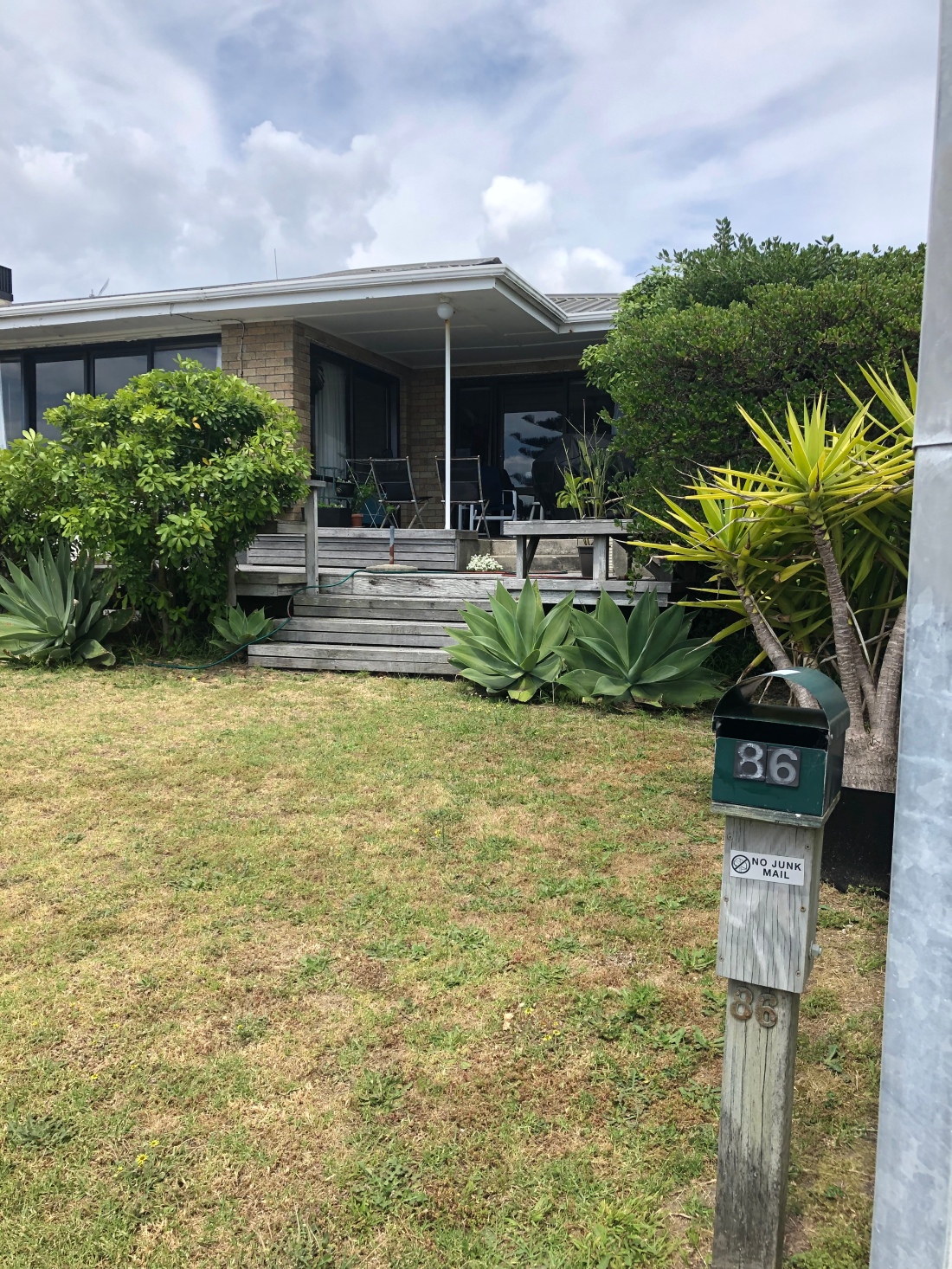 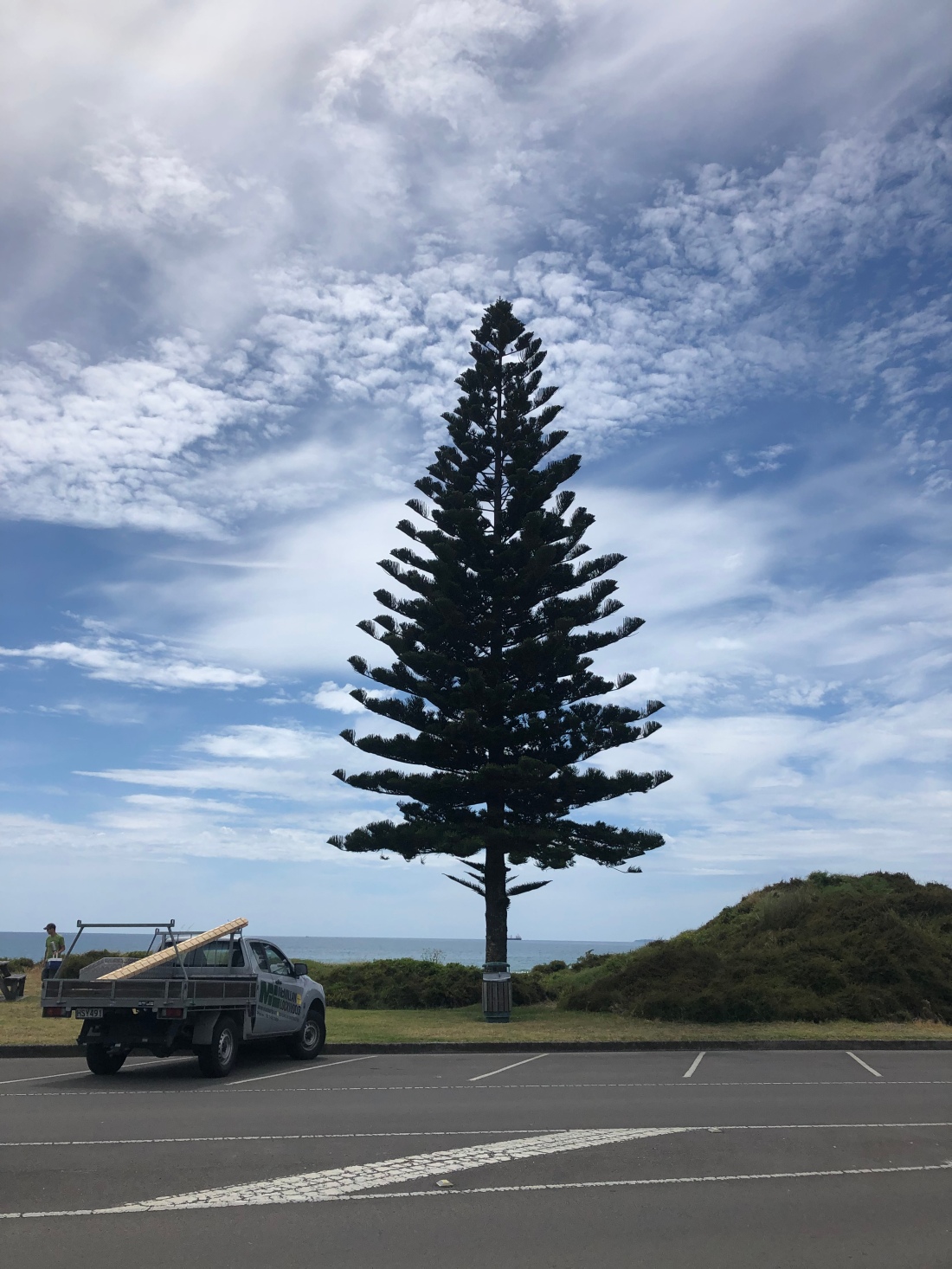 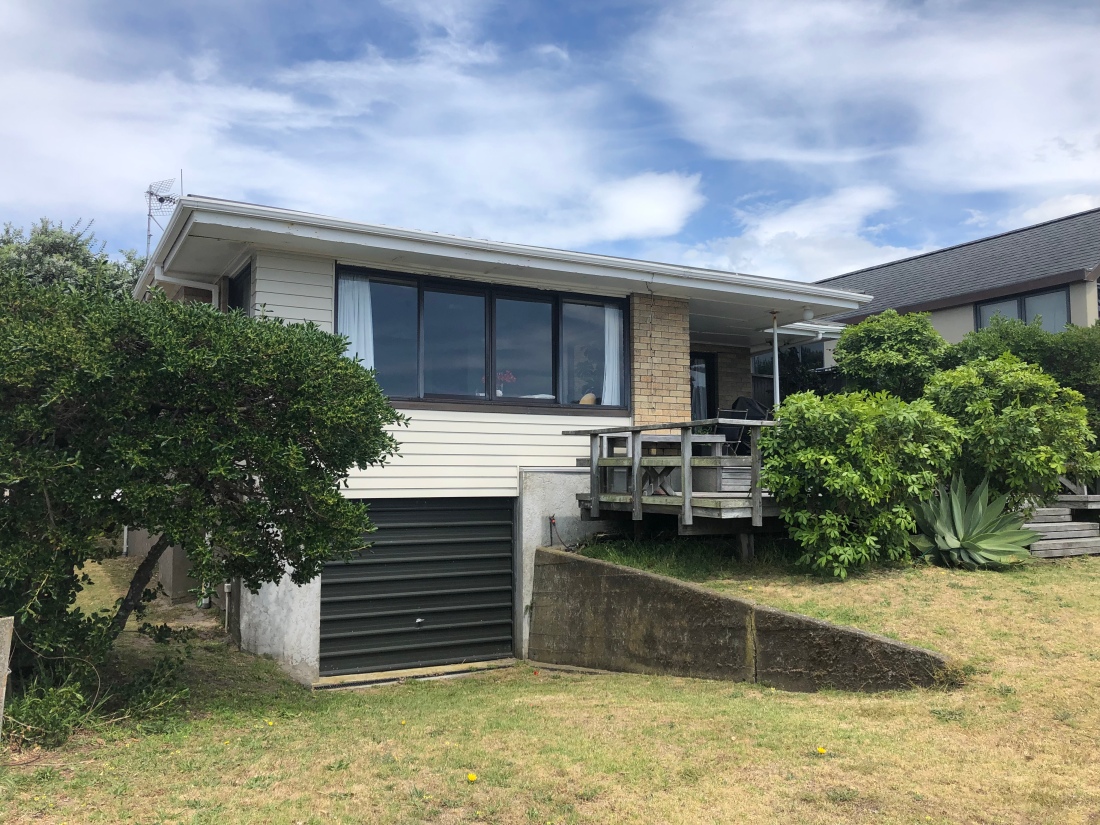 We drove further down the road and parked up, so we could walk along the beach front and Bugsy persuaded us to go onto the beach for a quick play before lunch. Ian nipped off for tea, coffee and hot chocolate while Cornelia and I did some digging and building. She just loves the beach.

Ian also retrieved a towel from the RV for us to sit on, although we were already both covered in sand by the time he came back. Nonetheless, l made use of it for the few minutes I was allowed to break off from the construction works to sit back and enjoy the odd few minutes of warm sunshine when it was able to break through the cloud.

The clouds did, however, hang around and as we left the beach and headed to the supermarket in Ki-Bell, they grew darker. Sure enough, just as I made it back to the RV, it started to pour down. This wasn’t the worst timing, as it meant we could make a trip to Warehouse to hunt for a scrapbook, which was about ten minutes away, without having to miss any potential beach time this afternoon. I went in to look for the scrapbook, while Ian and Bugsy went in search of the toilet blocks that need to be dropped down into the loo cassette. When I caught up with them, poor old Cornelia was sobbing away, because she’d met a unicorn around the corner but it was too big to join her Gang, and both she and the unicorn thought this to be terribly sad. What can you do?! There was no way we were buying a large unicorn!!! I had had no real luck finding a scrapbook- seriously, New Zealand is missing a trick here – but had bought (funnily enough) a unicorn hardback book to use as a temporary one, so at least I have somewhere to stick all the memories! I also found some small Christmas gifts for her, which I managed to hide while paying for them.

In the rain again, we headed off for Waihi Beach with the promise of no more stops to Cornelia, through Bethlehem again, and past the Bethlehem Birthing Centre which made us laugh out loud. 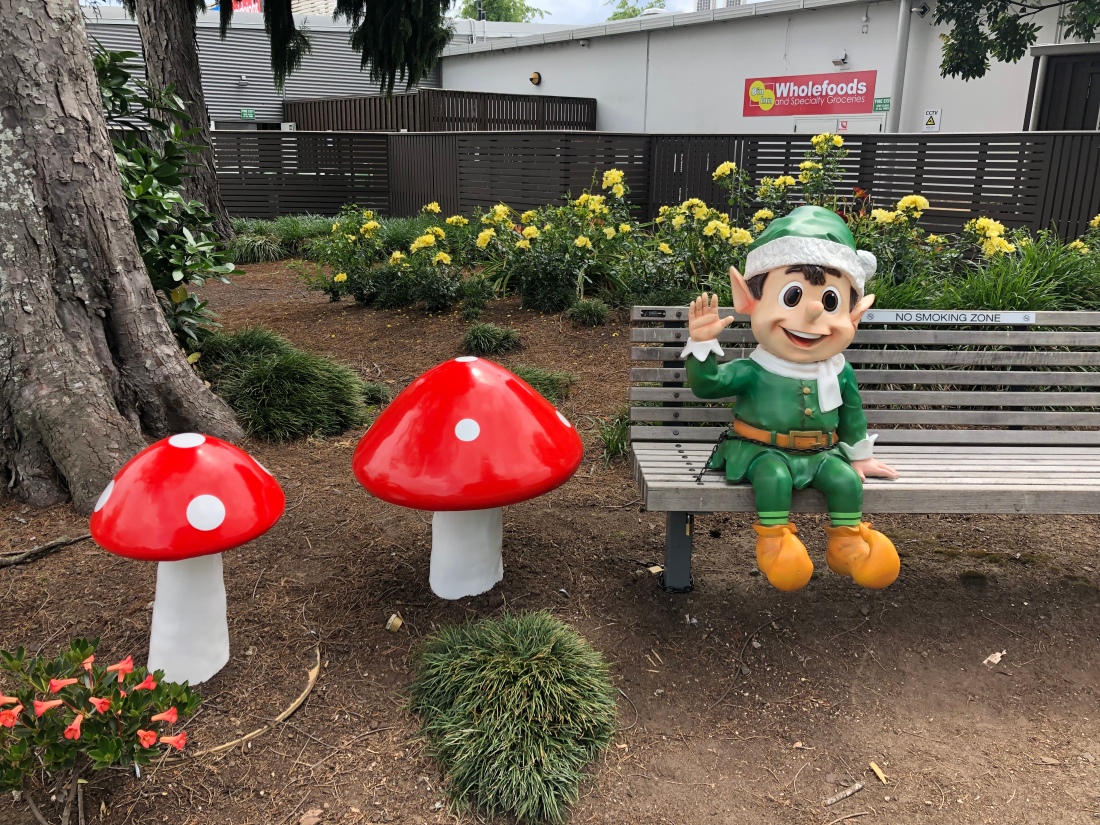 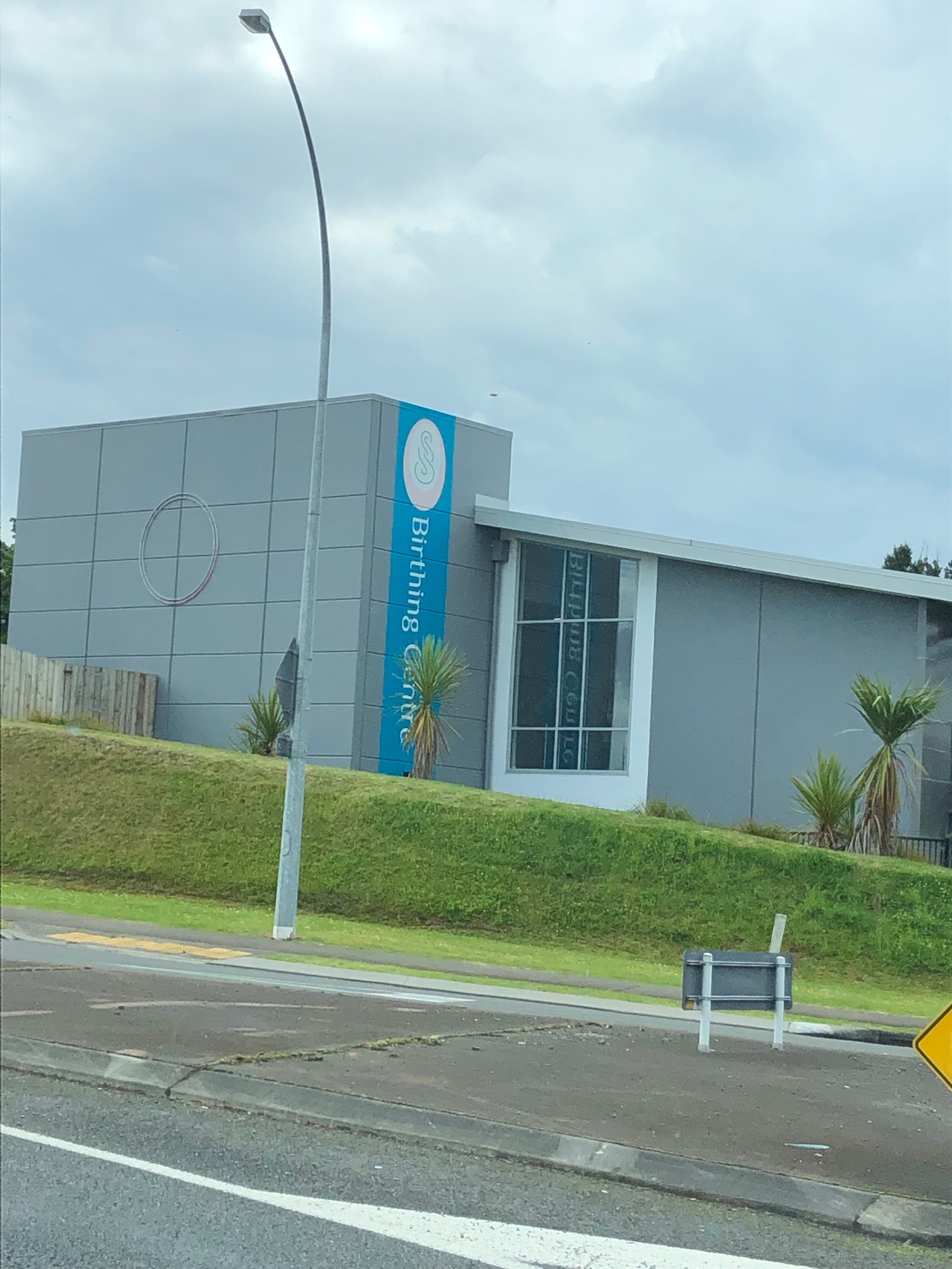 Ian’s pulse started racing as we passed the “Mower Gala” entrance, which included a Ride on Mower race… but on we went! Cornelia was singing songs from her Disney album on her Kindle and chuckling away to herself, so had clearly recovered from the sad unicorn moment earlier!

The sun came out just as we approached Waihi Beach and arrived at our campsite. I had booked a beachfront pitch and this turned out to be a great idea! The women at reception were very friendly and although the computer had already allocated us a pitch, they said this was a rubbish pitch and there was a much better one available. They showed the best one on the campsite map and said I could go and have a look, and choose which one we wanted. We drove across the road to the beachside pitches, only to find a huge tent sprawled across one of the free pitches. But the slightly smaller one next to it was available and we squeezed in there. It was a great spot as we could see the sea from it. Beautiful!

As it turned out, three girls – Victoria (5), Evelyn (4) and Amelia (19 months) – were staying on the pitch next to us, with their parents Haydn and Kirsty. What luck for us, and especially for Cornelia! She had spotted Evelyn whizzing down the slope on her scooter and was straight over to ask her if she wanted to play. Victoria turned out to be the more talkative of the two, and soon all three of them were having a brilliant time, chasing each other and playing hide & seek. Cornelia invited them into our van, so I went over to let Kirsty know that we had the girls, if that was okay! (It was!) Then, all the girls wanted to go to the beach, so I packed a bag of stuff and piled down there with them, shortly followed by Kirsty and Haydn. The beach is literally metres away from our pitch – just across a little bridge at the end of our site. We really couldn’t have asked for a better spot.

Victoria, Evelyn and Cornelia were soon in the stream leading down to the sea, soaking wet, covered in sand and having a terrific time, building a dam and throwing stones. Not wanting to be excluded, Amelia was waddling down with them too, doing her best to keep up, while I sat with Haydn and Kirsty just chatting. They are a wonderful family, and we were very sorry to learn that they would be leaving the next morning! But the girls made the most of their time together, and it was 18:30 before we left the beach. Cornelia showered with Evelyn, and everyone prepared for supper and bed. While I cooked tea, the girls were all up in Cornelia’s bed drawing and colouring, and Bugsy even read them a story! 🥰 Eventually, I had to tear them apart, so that we could all eat our supper, and we said goodnight with promises of a play on the beach in the morning before they left. 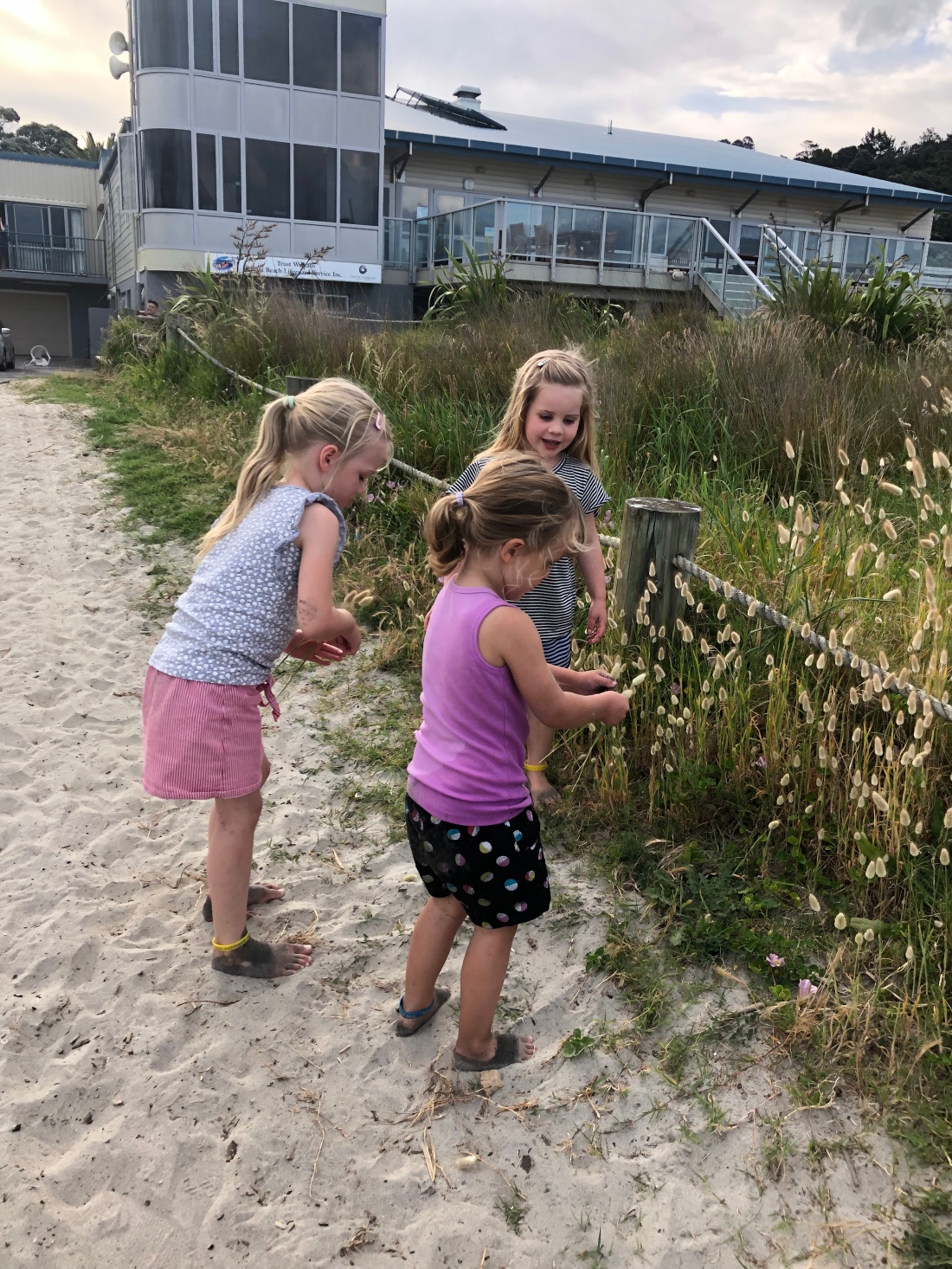 Cornelia was completed exhausted and exhilarated and was fast asleep within minutes, while Ian and I chomped our way through some New Zealand Whittaker’s chocolate, and I managed to watch a bit of Masterchef The Professionals before we curled up for the night. What a terrific day we’ve all had!

One thought on “New old haunts”