I managed to take myself out for another run this morning, keen to get back into the routine of waking and running, and shifting some of my unseasonal winter blubber that I acquired in Africa! I just went for two miles again, as we wanted to make an early-ish start getting to the RV place and setting off.

On my return, Bugsy had had her breakfast and was busy making a cart out of paper plates and paper! I packed my suitcases and the kitchen stuff, and did a couple of loads down to the car, then showered and we were ready to leave just after 09:30. 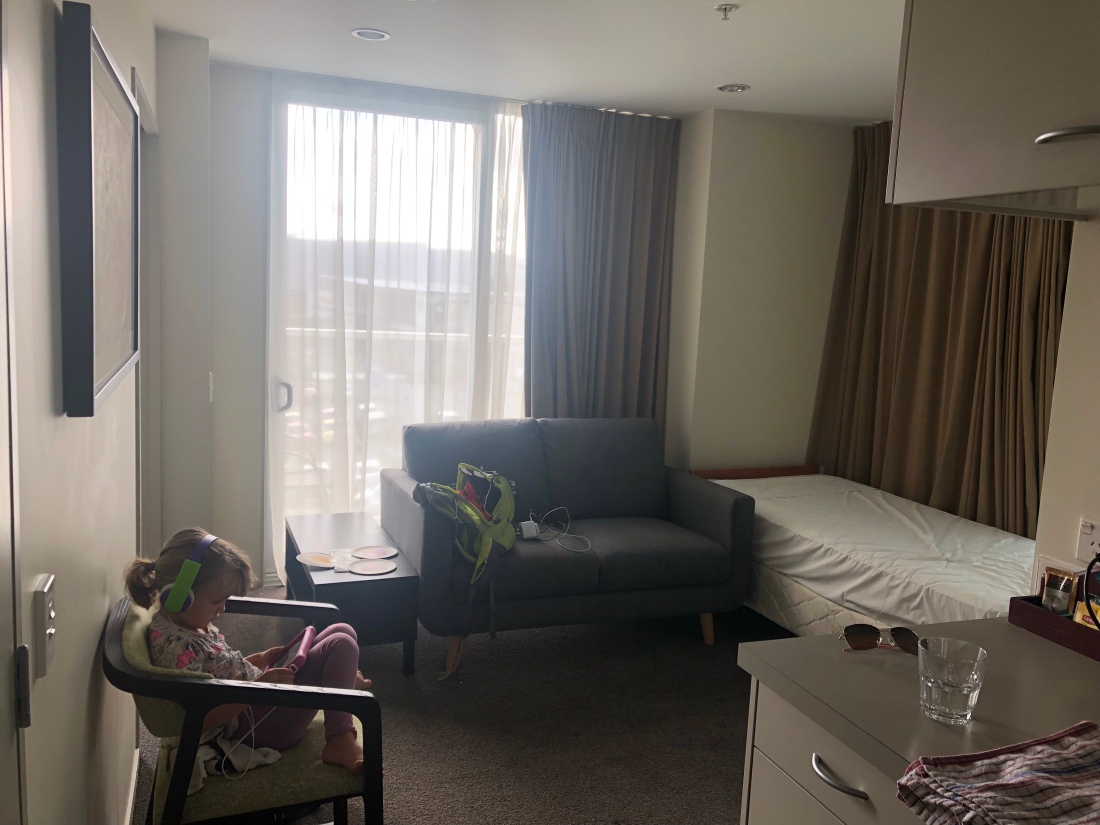 The Britz motorhome facility was not far away – about a fifteen minute drive a and when we arrived, it was packed! I was not expecting that at all! I queued to register while Ian unloaded our ton of bags into the lobby, and Cornelia watched a film on her Kindle. The queue went quite quickly and we were soon checked in and ready to wait a very long time to be shown around our motorhome! In the meantime, Ian left to return our hire car (the airport is only a kilometre or so away) and Bugsy and I sat on the floor together, watching the movie and updating the blog respectively. There were loads of useful pamphlets around including AA guides (roadmaps and accommodation) to all the different areas of New Zealand, so I am now fully loaded! Whilst we were waiting, I heard various people complaining that they had been here for over two hours and were still waiting for their vehicle. I rather hoped that we wouldn’t be here that long!

I was out of luck…! We were waiting for three hours after we had checked in. Cornelia was perfect. I sat on the floor with her, and we watched Snow White together (“So you know how to play it properly next time, Mummy”.) and then she pretended to be a dog, and we played fetch with an imaginary ball and bone. She became a wheelbarrow that I used to fill with potatoes, which we then cooked and ate together (chips). And we played piggy in the middle when Ian came back from dropping off the car at the airport. So actually the time passed very quickly, but we were very irritated by the long wait, especially as people who had arrived long after us had already been sent on their way. I asked about the cause of the delay, and Shayla told me that the cleaning staff had been working for three hours after their shift yesterday and non-stop this morning cleaning and preparing vehicles. I understood that, then queried why so many people had arrived before us but had left already. Apparently they might be VIPs. And what makes you a VIP? Apparently, if you work for one of the holiday companies and you are reviewing the vehicles/operations, or if you’re a CEO of a big company. Or indeed any number of reasons that meant that if you were just a mere customer with a four year old child, you were put at the bottom of the list. So, hopefully they’ll enjoy my review and feedback!

The motorhome is huge – of course, it has one more bed than we need now – but the extra space is not terribly well used. For example, there is no separate shower cubicle in the bathroom, nor even a shower curtain, so all of our bathroom stuff (including loo roll) will need to come out when we shower, or end up soaked. While Ian was shown around the vehicle (named KiwiBell or KiBell for short), I unpacked the food bags and noticed that our cutlery drawer was covered in laundry powder (or similar), so I asked Shayla to have it cleaned. A sweet cleaner arrived, full of apologies, saying that the other cleaner had said she’d forgotten to do the drawers, and in moments, the tray had been cleaned, all the cutlery replaced and we had new cups too. I remarked that I had heard they were really busy, so I really appreciated her coming out so quickly. The poor woman had not had a break that day (and I think she had started very early) and was on the edge of tears. I felt so bad for her! I thanked her a thousand times and told her again how much I appreciated her help – anything I could say to make her feel better about working so hard, although I doubt it helped much! She returned five minutes later with a bucket and rubbish bag, which fit in a space under the shelves. 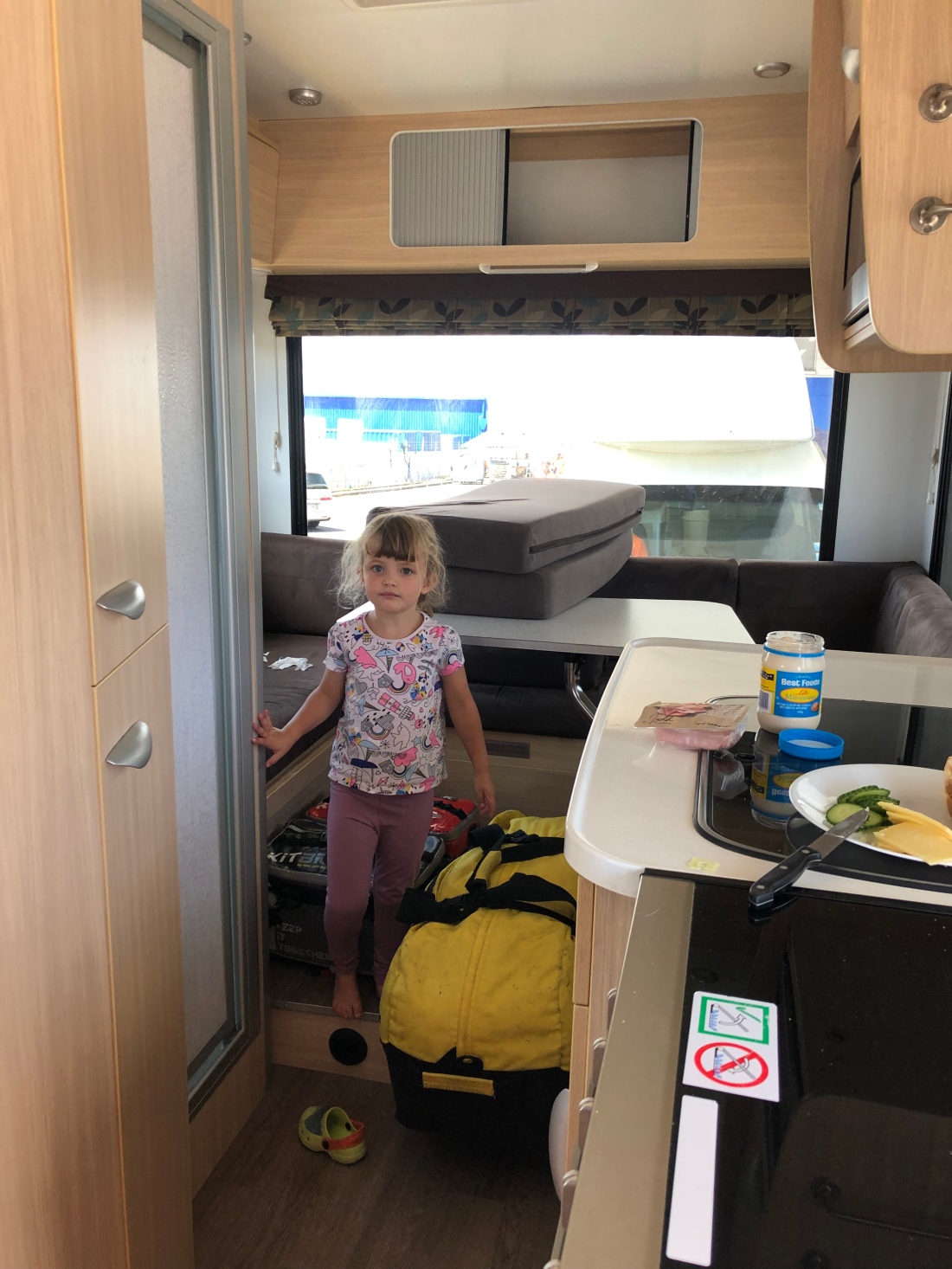 While all this was going on, Cornelia was still being brilliant, making herself a slide out of Ian’s yellow bag, and a bridge out of the sofa cushions. Unfortunately, Ian was not happy about his bag being used like this – the complete opposite to the praise I’d given to her for making herself her own toys! 😳

When we finally left, it was just before 15:00. I had made lunch for us there, in the car park, and we set off for Waitomo, our first stop of the trip. We’d planned to be there quite early so we could spend the whole afternoon looking around, but the sat nav had our arrival time as being 17:40, so that was out of the question. The frustration of the delay in receiving our vehicle hit us again, as we realised we had paid for half a day of the van and we hadn’t actually been able to use it!

ANYWAY! We set off, with Ian driving along the Highway 1, bound for Waitimo ….. kms south west of Auckland, famous for its glow worm caves, which we planned to visit tomorrow morning.

The drive was easy enough, although the sat nav took us a very strange way, avoiding the main highway and treating us to a trip down the side roads of this part of New Zealand. The countryside here is very British, apart from its numerous small rolling hills. The greenery of the fields and trees are the same. But the noticeable difference was the buildings. Here, many are prefabricated houses, with corrugated tin roofs and they are strangely attractive, in a variety of colours and sizes. 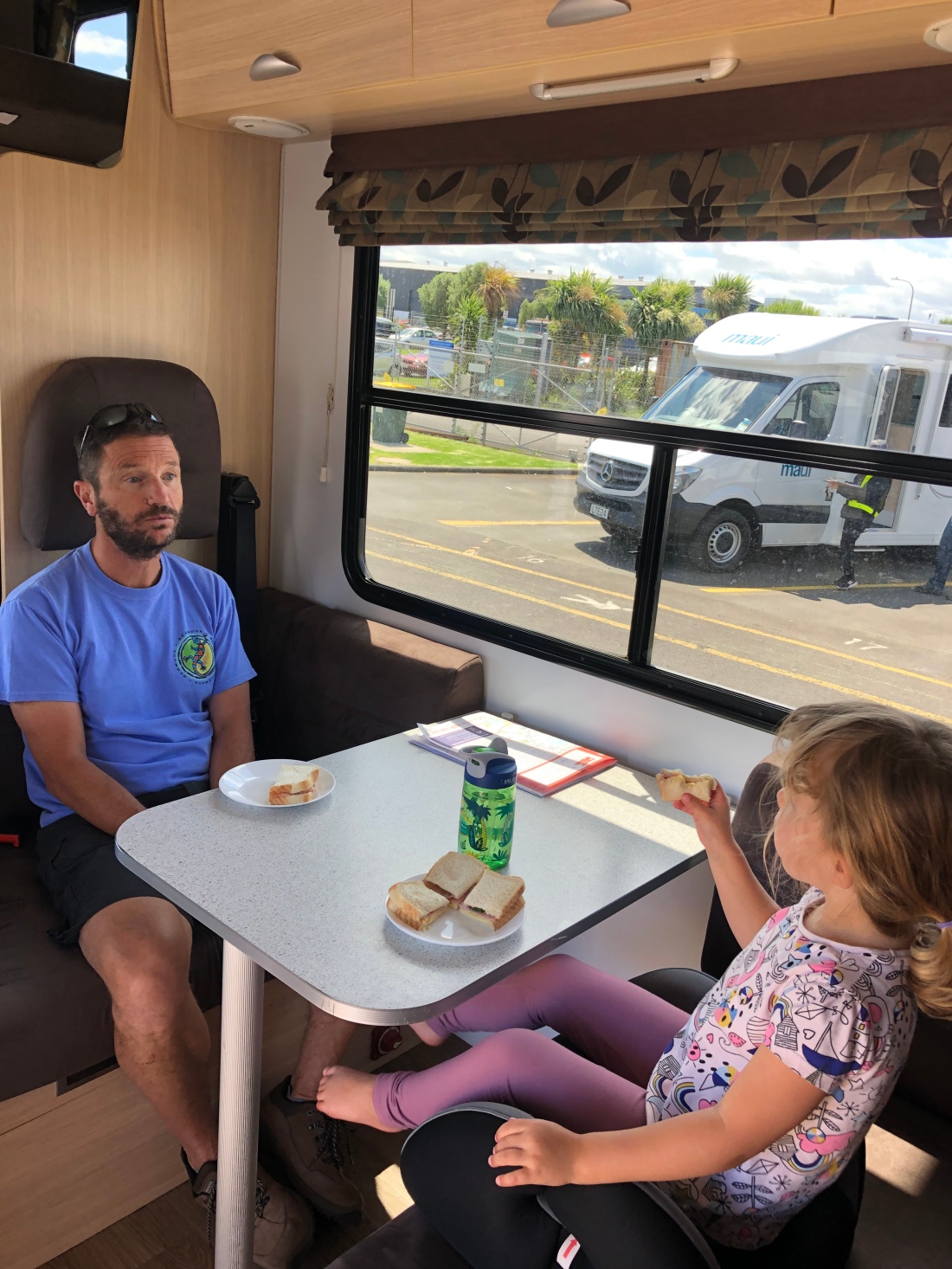 Cornelia managed the journey very well, although she was starting to get quite tired as we headed the campsite. Thankfully, she stayed awake until we arrived and when I came back, having checked us in, she was happy as Larry, sitting in my front seat ready to find our pitch. The chap at reception had been very helpful and friendly, and advised that we aim to be at the caves by about 09:00/09:30 in the morning, as the tourist buses arrived at 10:00. That was very useful to know.

Pitch 20 was good enough – it had electricity, and was directly opposite the kids’ playground. I had promised her a popcorn and movie evening with me, so I opened the bag of corn and we sat down together to watch some silly film about a dog and a pig that find lost animals. She must’ve been slightly uninspired as about halfway through, she put on her crocs and announced that she was off to the playpark! And off she went!

I cooked tea (frankfurters, beans, mash and onions) while she played and Ian started putting her bed together. Her bed is above the driving cabin again, much to her delight and ours is at the opposite end of the RV. In the middle, is a table with a sofa bench either side, the kitchen (gas hob and grill, microwave, fridge, sink and work area) and storage cupboards, and a very smelly bathroom.

Ian went to supervise Bugsy, who was apparently being quite indifferent to the two boys that were trying to play with her, and eventually I called them both back in for supper. We ate a TV dinner, watching the rest of the movie, before both it and the meal were finished.

After we’d eaten, I washed up while Ian prepared Bugsy for bed. Easier said than done…They had a massive falling out. She was being very annoying and winding him up, but he retaliated by yelling at her, and taking away treat after treat: her Kindle tomorrow, any more DVDs, and eventually he said we’re not going to the caves tomorrow. I was aghast at that! I want to go the caves and he took that away with no warning whatsoever! In fact, I had suggested that he just ignored her, now she was in bed as she was clearly past the point of rationalising anything! Ian was, by now, quite grumpy and we fell out too. I’d unpacked all of his stuff while he’d been trying to deal with Cornelia, but instead of saying “Ooh, great, thank you!” he moaned that he wasn’t going to unpack everything and store the unpacked stuff in one of the cupboards. So, that’s the last time I try and help him out!!

Cornelia’s difficult behaviour continued, but ignoring it was definitely the answer, as that brought tears and apologies and eventually, a request that her toys and book be returned (she’d thrown them out of her top bunk). I told her that she needed to lie quietly for one minute without banging or yelling or any of that, and after a couple of false starts, she lay down… and within one minute, she was sound asleep. It was 21:00.

Ian was still being stroppy with me, so I sat away from him, writing this, and hoping he’d start making up the bed (on which he was sitting) soon, so I could go to sleep!!

One thought on “Meet Ki-Bell!”