Ian was up early today, as Avis were due to collect BigBell between 07:00-07:30. They arrived at about 07:45 while I was showering, and he went through our “list of things to tell Avis” that we have accumulated over the last five weeks. He also pointed out the crack in our windscreen which is hopefully reparable. They seemed to think so, and so off BigBell went, for another adventure!

We had booked breakfast for 08:30 and arrived a few minutes after that, to an empty dining room. The tables were all set for breakfast, so I assumed that we were surprisingly the first in rather than the last! Ian had ordered a full English, and Cornelia and I were both content with a Continental: granola, fruit and yoghurt / cereal and toast.

We had just finished packing our stuff up (and in fact, I was currently being a baby dragon making my way through the dragon tunnel) when the knock on the door from Alida came, to tell me that Anna-Mari had arrived.

Anna-Mari is a very old friend of mine whom I met in Israel over twenty years ago, when we were both au pairs for two wealthy Jewish families. The mothers were friends at the time which is how we met, and we went on holiday together to Cyprus for a week (when I left Israel), then I visited her in Paris when she was working there (having won South African Young Designer of the Year) and she returned the visit when I was living in Huddersfield. My God, we had some hilarious memories to recall, most of which cannot be shared here! I’d forgotten some of them, but Anna-Mari regaled me with her incredible memories of that period of our lives, including one episode involving us sleeping in my car in London eating Pringles and KFC mash. I simply couldn’t believe I’d even been to a KFC!!! 😂

Anyway, it was amazing to see her and not at all like eighteen years had passed.

Although she had asked if there was anything we particularly wanted to do, we really had no idea what we should do, and besides I just wanted to catch up with her life since 2000. So she took us to Rosebank Mall, where we walked around a local arts and crafts market, which was amazing. I wish we had more space in our bags, as there was so much stuff we could’ve bought. Some of the stuff is quite unusual , for example, baskets made from recycled telephone cables, and patterned rugs stained by different coloured muds.

We met up with Anna-Mari’s friend, Retha (who was also hilarious and I wish I’d known her back then too, because the three of us would’ve got into so much trouble together!) for coffee, while a talented Ghanaian made a bracelet from threads with Cornelia’s name on it. There may also be a couple of Christmas presents for other friends created today!

When we settled the bill for our drinks, the waiter brought us a few boiled sweets. Cornelia has never had a sweet before, and was curious to try one. I was quite sure she wouldn’t like it, as I thought they were coffee-flavoured. Turns out they were butterscotch, and who doesn’t love that??!! Oh no! She loved it! Anyway, she was allowed that one, and didn’t make a fuss when she asked for another one and was told “No!”.

After coffee, we popped into a little barbershop to see if he could trim Cornelia’s fringe, which he could, and Ian had a trim as well (but he wouldn’t let him tidy up his beard!). Bugsy was very cute, sitting so still for him, smiling nervously upwards.

From Rosebank, we drove to a cool little place called Melville (Cornelia yesterday, Melville today… where is Ian’s name going to take us?!) and to a fab kids’ restaurant called Bambanani.

It was completely set up for children, with arts and crafts for them to do, sand painting, a play kitchen and shop, Lego galore, and an outdoor soft play area. This was where we settled and ordered lunch, as Cornelia played with the other children, under the supervision of Florence. Yup, free childcare while the grown ups talk! It was fantastic! Cornelia simply had the best time, and it was so good for her to burn up some energy before our long flight tonight. Lunch arrived and was excellent, and the whole overall experience was wonderful. 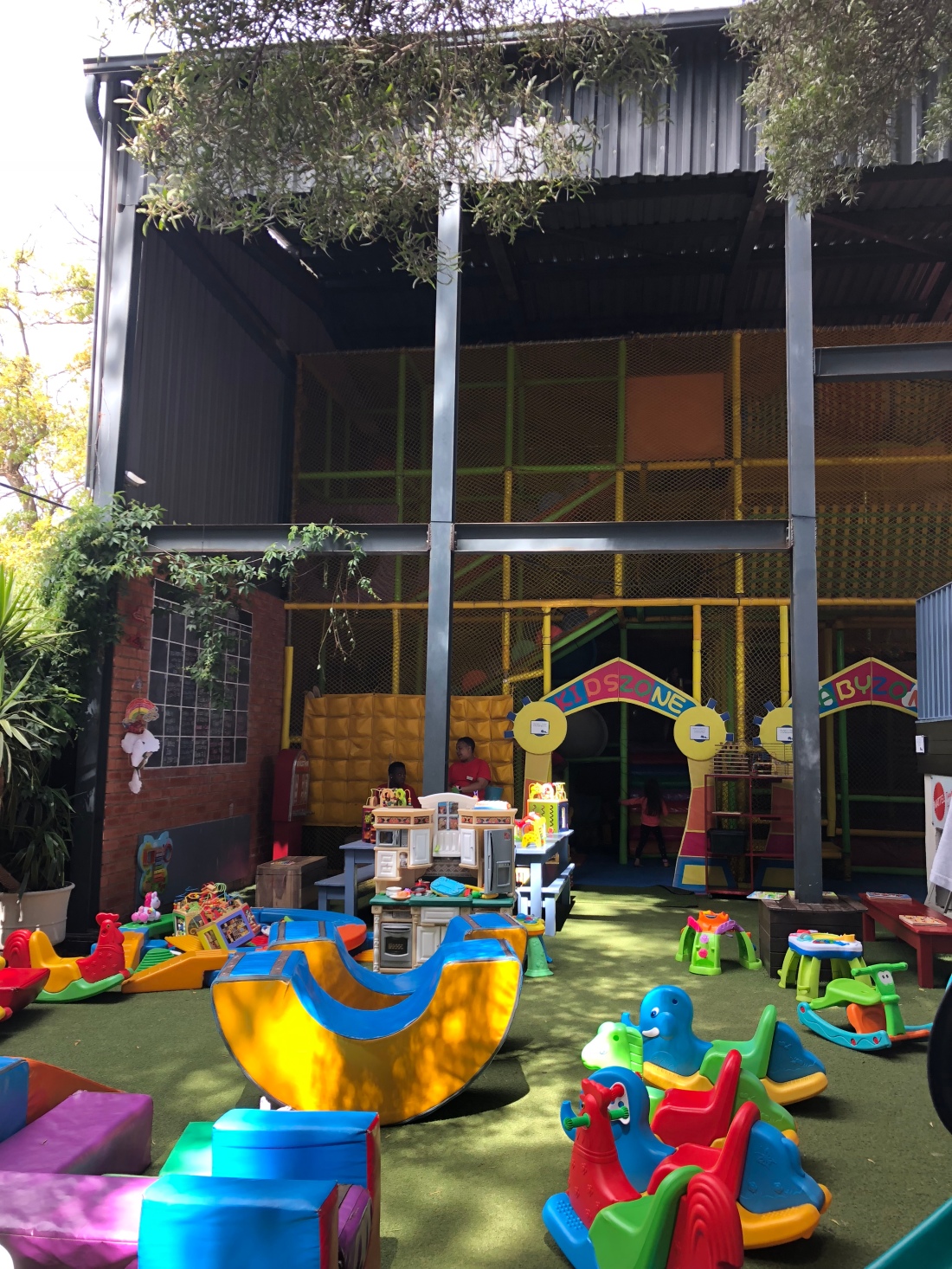 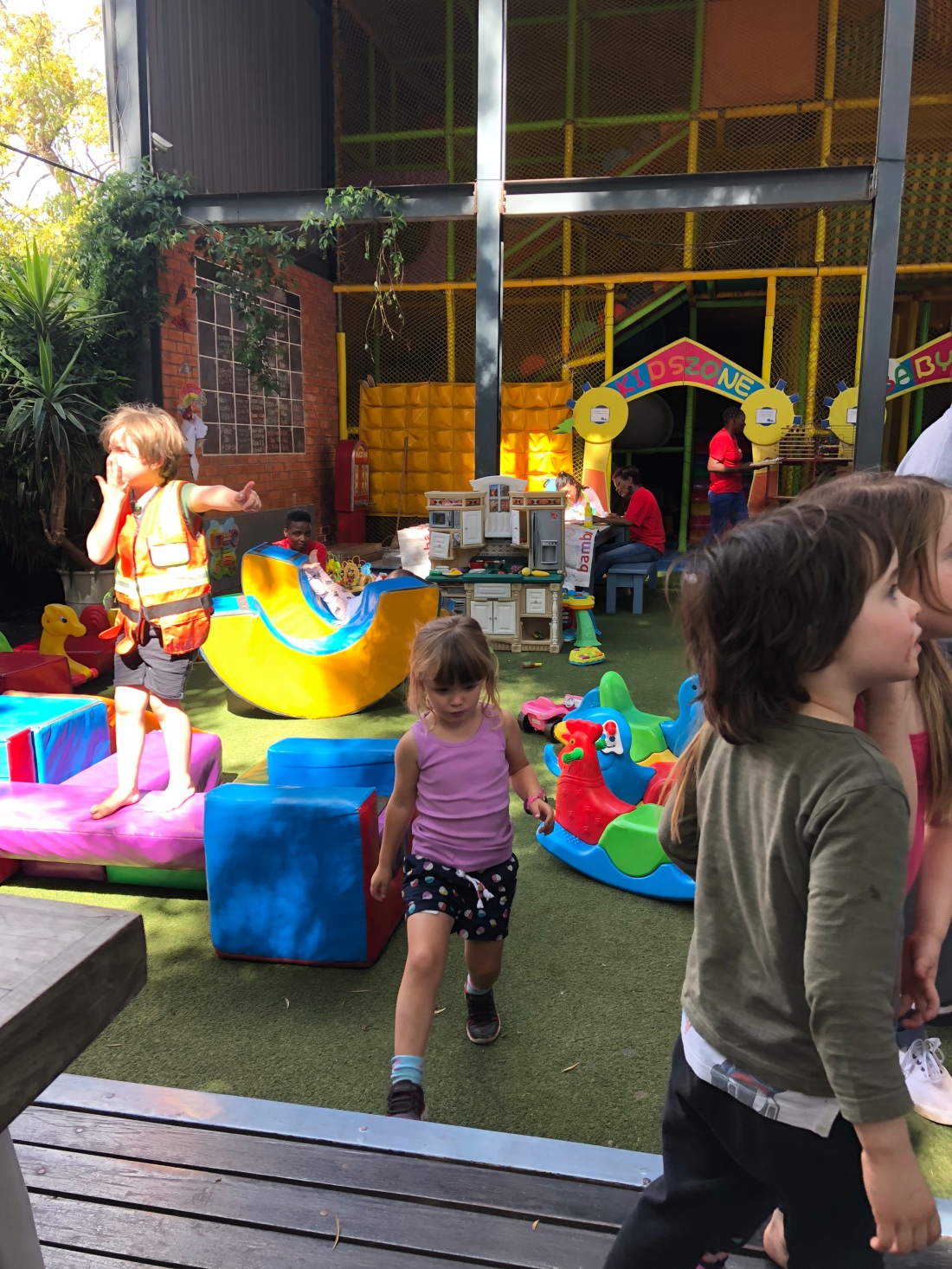 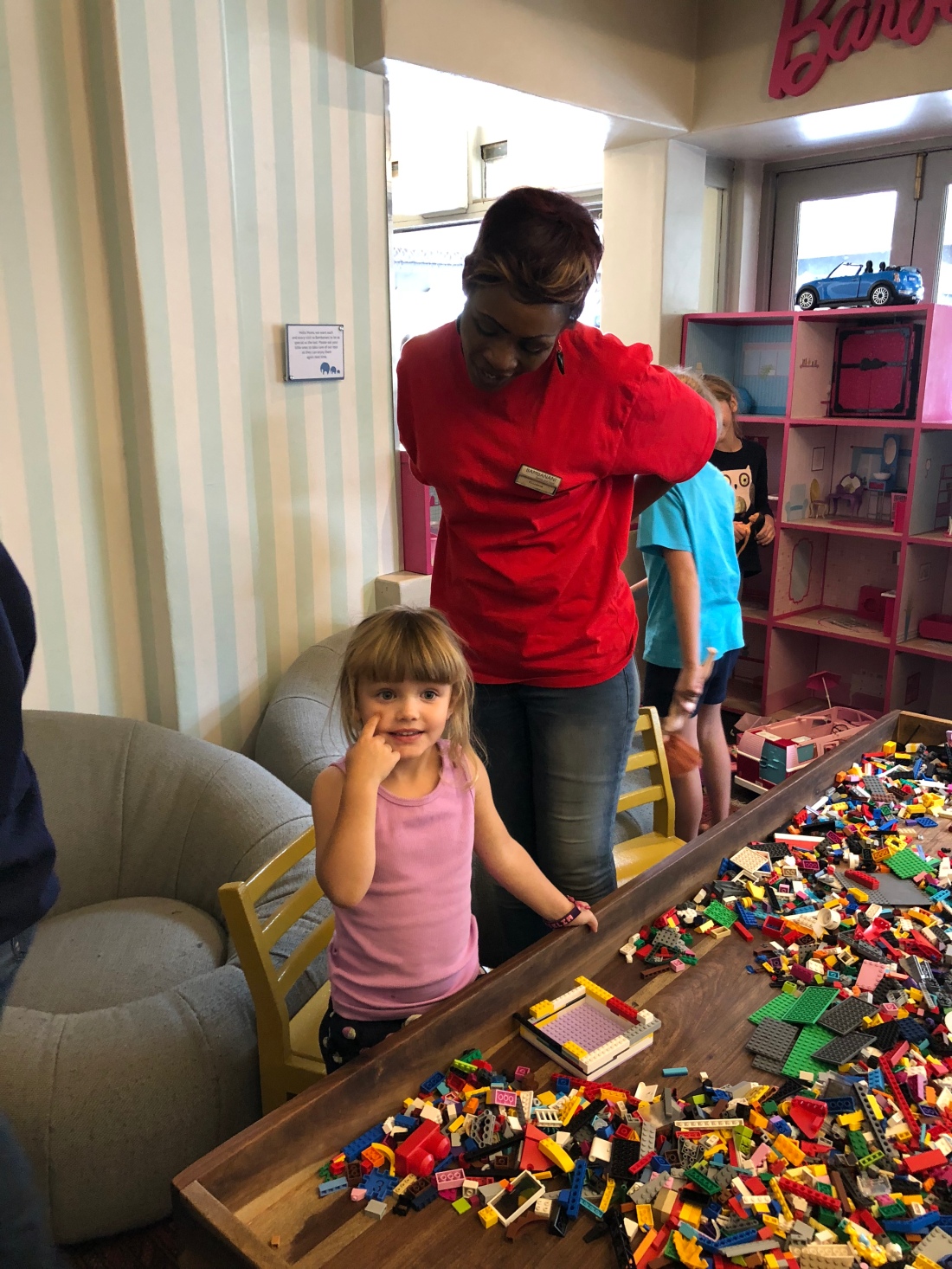 We suddenly realised the time and had to leave quite quickly, as a driver was booked for us at 16:00 from Journey’s Inn to take us to the airport. Anna-Mari took us the scenic route (which would’ve been quicker than the highway due to rush hour) and we saw some of the incredible houses up on the hilltops overlooking Johannesburg.

We arrived back on the dot of 16:00, and as we pulled through into the driveway, our transfer arrived. The timing couldn’t have been more perfect. Ach, it was so hard saying goodbye to her, but we have made promises to visit again (for longer than a day) and I fully intend to keep that promise. I had one of the most fun days I’ve had on our world trip so far. 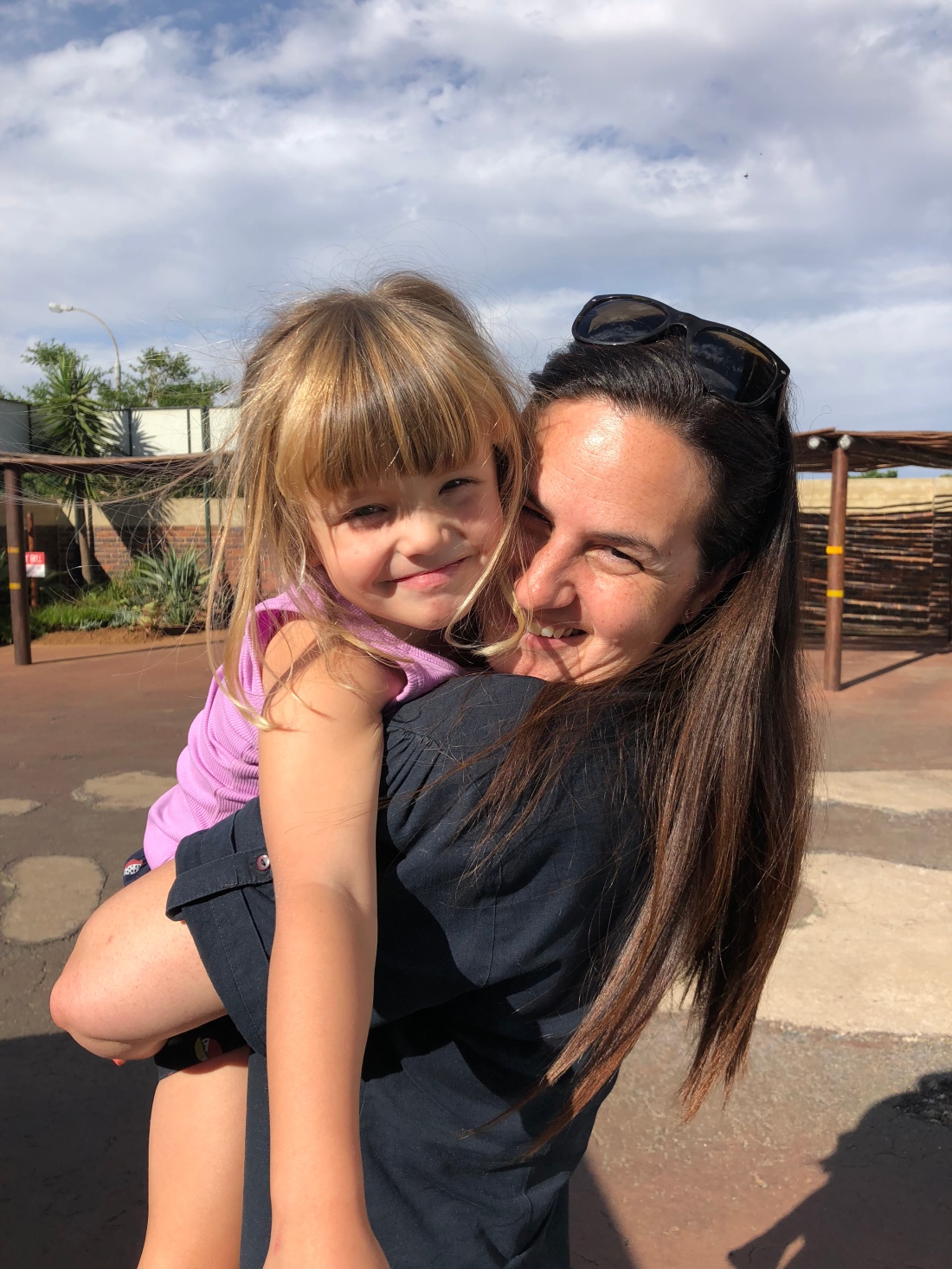 At the airport, Cornelia took her usual trolley ride in to the terminal, only to dismount without Ian hearing her say that she was about to get off. Oh dear, toddler down. And under. Her foot became stuck under the wheel before Ian had even realised she was off. Argh! Cue plenty of sobbing and looks of horror from passers by, but actually, she was fine and it was more the shock of being run down by an airport trolley than being hurt that was making her cry. We had been advised that have our hold luggage wrapped up to prevent theft, so we zip tied our bags and had them covered in cling film, much to Bugsy’s amusement.

Check in and security was all straightforward and friendly, and we passed through without even needing to take our liquids out of our bags. With an hour to kill before boarding, Ian went to see if he could find himself a new book, while Cornelia drew a picture and called it “Botswana starry night”. He came back empty handed.

I went off to check out the book store and came back with a new book for Bugsy, a sticker book, a handwriting and activity book and a new Gang member (that she doesn’t know about yet), as well as a book for me and another Christmas present for someone else. Success! I think Ian was put off buying a book because they are so expensive here. It is so peculiar. South Africa has probably been our most affordable country so far, but the books are disproportionately dear. The one I bought (Jodi Picoult’s latest) was nearly 300 Rand (£16). Anyway, I managed to cram it all in without Ian spotting the extra purchases, by which time we needed to get to the gate. There was a second security check, followed by a quick board. We were all set to go, and had taxied down the runway, when the captain announced that there was a technical issue which was making a couple of lights flash in the cockpit, and we had to return to the gate to allow the engineers on, who would assess the problem. An hour and a half later, we were ready to fly, and took off with no further problems or delays. The captain announced that there was a favourable tailwind, so we should make up some of the time. 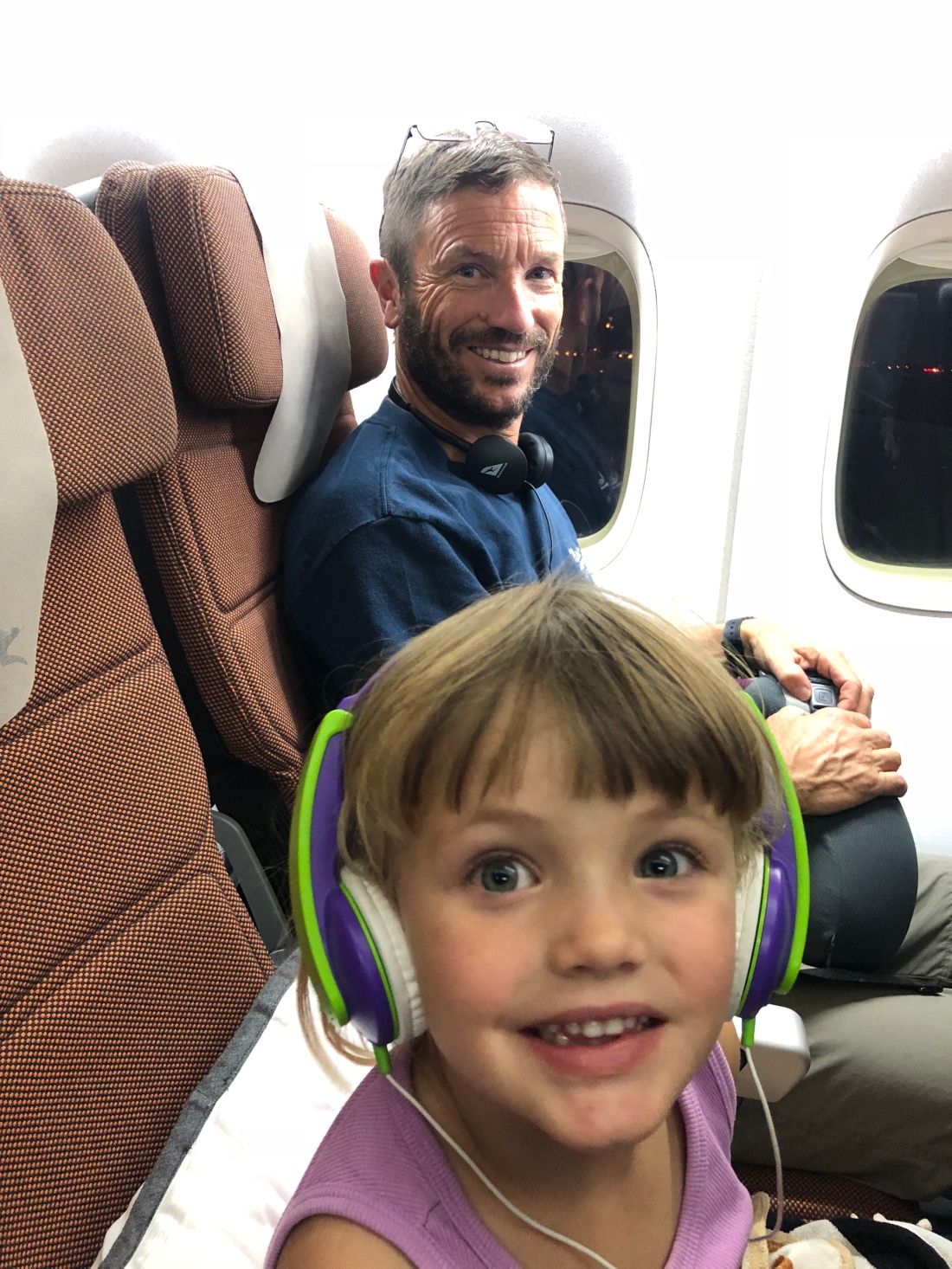 Cornelia was brilliant during the flight. She watched Toy Story, ate her meal and then ASKED if she could go to sleep. The timing was perfect, as she fell asleep at 22:45 (SA time) and remained sound asleep until we landed. Not a squeak from her. She just stripped off, lay down, and that was it. 😇

In the meantime, Ian and I ate our meals, watched a movie, and then I tried to get some sleep too. It was, inevitably, a fitful and interrupted doze, but I felt fine coming in to land. I had completed our entry cards, nervously declaring our oat bars and jams that I hoped wouldn’t be taken from us on arrival. I would have to wait and see!