The day started off brilliantly, with Cornelia calling out a cheery “Morning!” to us, then jumping in to bed for a lovely warm cuddle. Ian and Bugsy had a shower and I dressed her as quickly as possible (it was still very cold in both the bedroom and bathroom, and we went into the main room for our breakfast. Pieter had been busy preparing a great spread for us: homemade sausage, tomato relish, fried eggs and toast, muesli, yoghurt and jam. I ate it all, despite still being full from last night. He is such a lovely man, neither of us would want to disappoint him by not clearing our plates! Cornelia, on the other hand, did not seem to care about pleasing Pieter or us, or indeed anyone, including herself, having a yell and a scream about nothing at all. “I don’t want a sausage.” “I don’t want toast.” “That yoghurt is yuck.” “I’m not eating ANYTHING!” 🙄 During the course of breakfast, she lost her snacks for the morning, and her Kindle for the day. She was very sorry, of course, but even her apologies were yelled savagely at us!

She asked to read a story to Pieter, then only read a few words to him, before refusing to read any further. And then she was a pest when brushing her teeth. She had eleven hours of sleep last night, so goodness knows what that was about!

She cheered up sufficiently to give Pieter a hug goodbye and have her photo taken with him, resting on a very old carriage in their garden, and we wished him well as we went on our way. What a charming man he was! 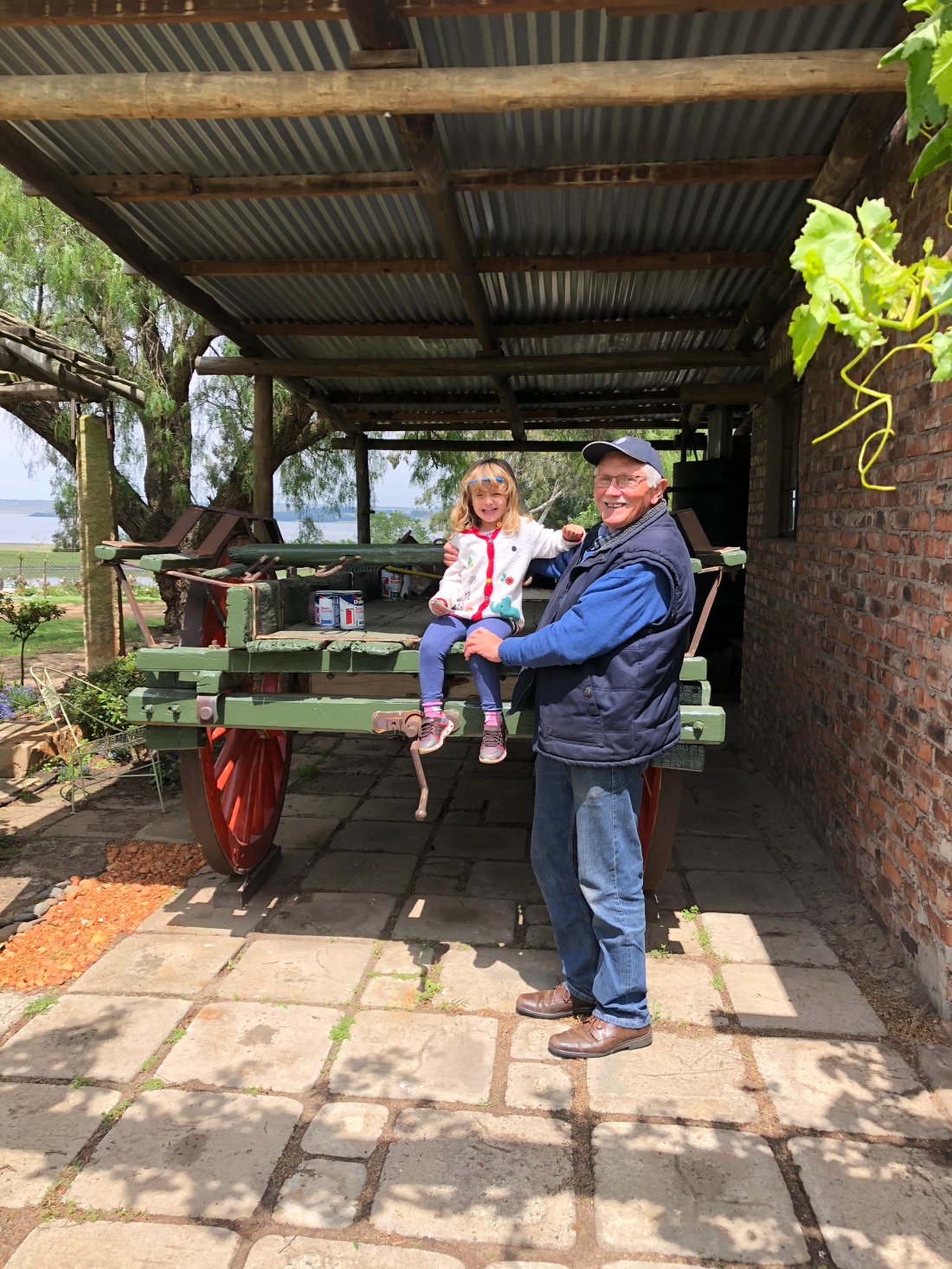 I did the first leg of the driving, and we listened to The Folk of the Faraway Tree until I was desperate for a wee, and pulled over to a fuel station where we stopped for a diesel refill too. We had driven through some industrial towns, thriving due to the nearby diamond mines and power plants, we think.

Ian took over the driving, and we cruised into Ladysmith, a really lively town, complete with SuperSpar, Nando’s, tons of street stalls and a Vishnu Temple. Ian parked up and he and Cornelia waited in BigBell, while I went into the Spar for lunch goodies, and food for the next couple of nights.

Once I made it out (without insulting anyone this time!), we drove on to a lay-by to make cheese sandwiches for lunch. (There had been nothing appetising in Spar.) I skipped lunch as I am still bursting out of my trousers from the last 24 hours of eating, but Ian inhaled his cheese sandwich and Cornelia gradually worked her way through hers, although we did start driving again while she made slow progress with her sandwich. We’ve finished The Folk of the Faraway Tree, and have started on the next Enid Blyton trilogy.. The Adventures of the Wishing Chair! Ian does not enjoy these as much as he enjoyed David Walliams!

We drove through the pleasant little town of Winterton and started driving on up into the mountains of Central Drakensberg. The fields we passed on the way were agricultural on vast scales, with giant spray fertiliser machines and neat lines of wheat as far as the eye could see. 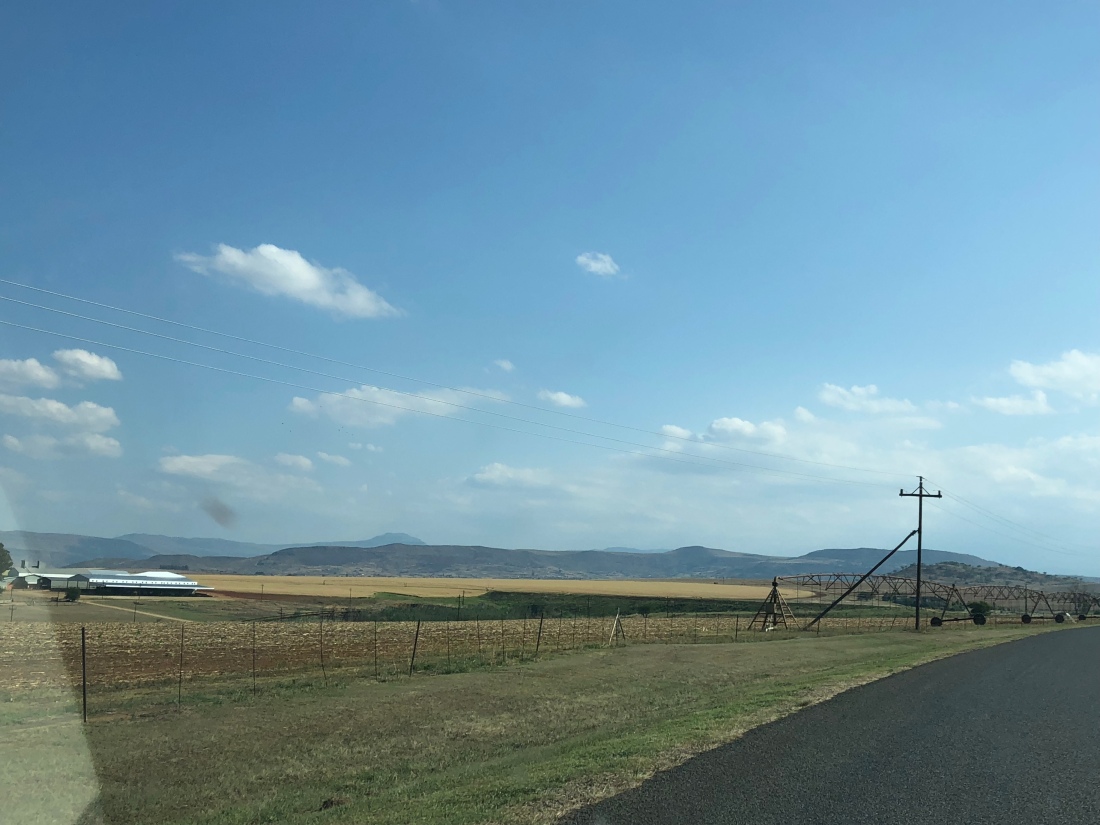 Champagne Castle Resort is, as the name suggests, rather fabulous. We have the most amazing self-catering chalet with three big bedrooms, three bathrooms and a huge open plan sitting/dining room and kitchen. There is a patio with a table and chairs for six, overlooking the Drakensberg mountains, including Champagne Castle, the second highest peak in South Africa, named after the bottle of celebratory champagne that was accidentally broken by the guide who helped two explorers to the summit, back in 1861. 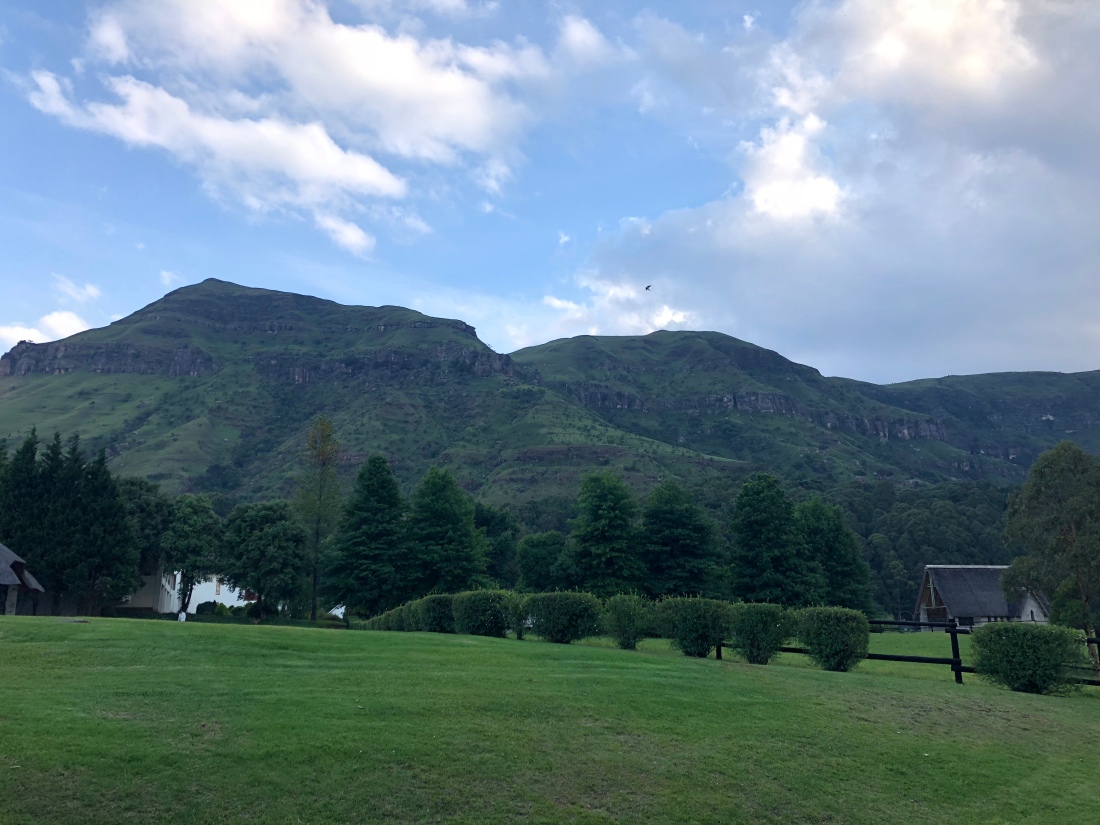 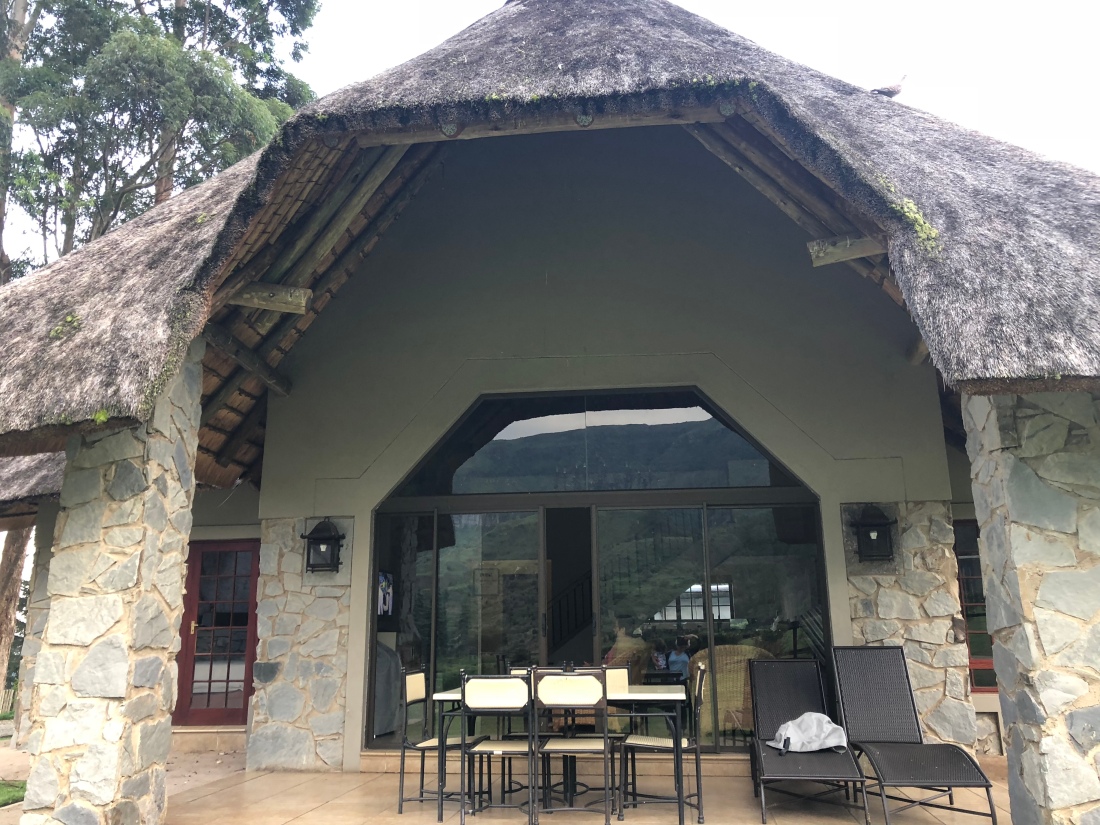 We spent a long time dealing with all the admin that comes with cancelling a flight, and trying to change our accommodation bookings and the size of the RV, now that we need one bed less. It was just as well is was a bit cloudy outside, so we could be indoors without feeling bad that we were wasting our last precious hours here!

I made pasta bolognese for tea and drank wine, while Ian watched the rugby and Bugsy had some Kindle time. She has absolutely aced today – she’s been so gorgeous and loving. I had a great evening with her, reading both her stories and putting her to bed.

I then watched Bake Off, having not seen any TV for weeks, and crawled into bed shortly after 22:00. I absolutely love this place!