We all slept well and went off for our breakfast. Unusually, Cornelia just had one piece of toast this morning. The breakfast was as unimpressive as yesterday, perhaps even more so as they didn’t have any brown bread – just white. Additionally, our waitress was not at all friendly.

I packed up the van, and we were ready to go by 09:30. I drove again, and it wasn’t a particularly interesting drive, although we passed through some bustling towns, and interesting villages.

Once we turned off the main road for the final few kilometres, we were held up by a large herd of sheep coming towards us. They don’t use sheepdogs here… they had a couple of men running alongside the sheep, herding them to the side of the road and past us.

We arrived at Miss Chrissie’s Guesthouse to be greeted by Pieter, who owns the guesthouse with his wife, Aretha. She was the one who had converted the barn (built in the late 1800s) into the guesthouse, and they live in the cottage opposite. The entire property is on a working cattle farm, and they have three dogs, a cat and many ducks!

We only stopped in briefly, and asked Pieter for a lunch recommendation, as it was already 14:00. He was very clear that there was only one place to eat in Chrissiesmeer – John Jack Inn. After some initial confusion about the John Jack Inn and The Billiard Room (the former being the B&B, the latter being the eatery) and having sought the advice of the most gorgeous looking gardener I have ever laid my eyes on who was good enough to point us in the right direction, we opened the door and were very pleasantly surprised to find a modern set up. The town of Chrissiesmeer itself is unremarkable, with the usual rundown little stalls and lots of people milling around along the edges of the road, selling their wares, and little else to do. However, this was like being in a St Austell Brewery pub in Devon! 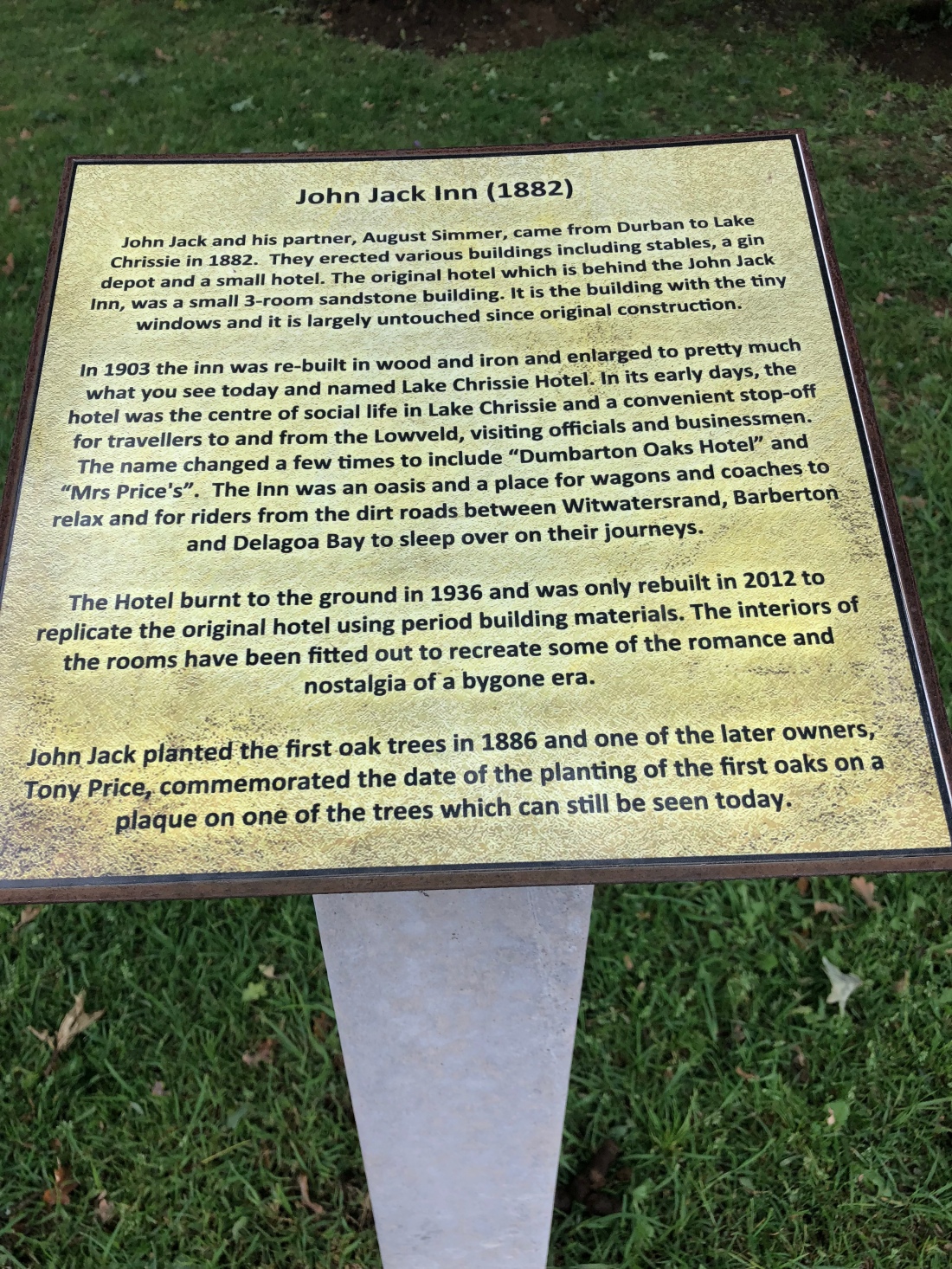 Our waitress was very welcoming and warm, and I ordered the “basket meal“ which turned out to be a large wooden platter with chips, cheesy meatballs, spring rolls, and mixed vegetables. I have to say, I have not really been much of a lunch eater while we have been away, but I devoured the whole delicious lot!

After lunch, we were heading off to the post office, to send some cards we had written, and as we were crossing the cattle grid at the end of the pubs driveway, Cornelia came flying down after us and did not hear or respond to our urgent cries of “Stop! Stop!”

How that child did not catch her feet and snap her leg, we will never know. Her tiny feet miraculously missed the gaps and she didn’t even notice the worry she had caused. Argh! Anyway, we made it to the Post Office, Ian popped our cards into the box and we crossed at our fingers that they would arrive at their destinations! 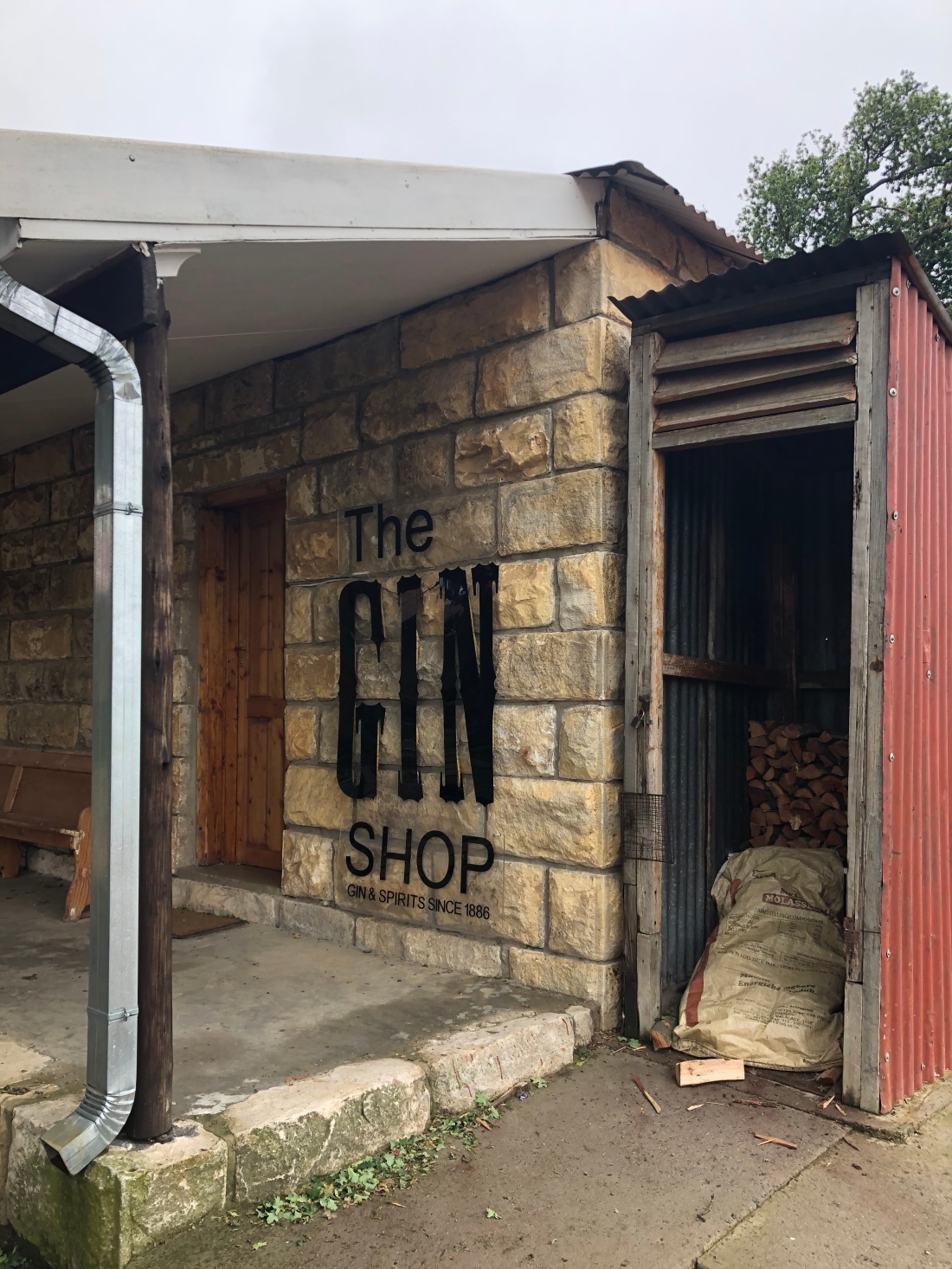 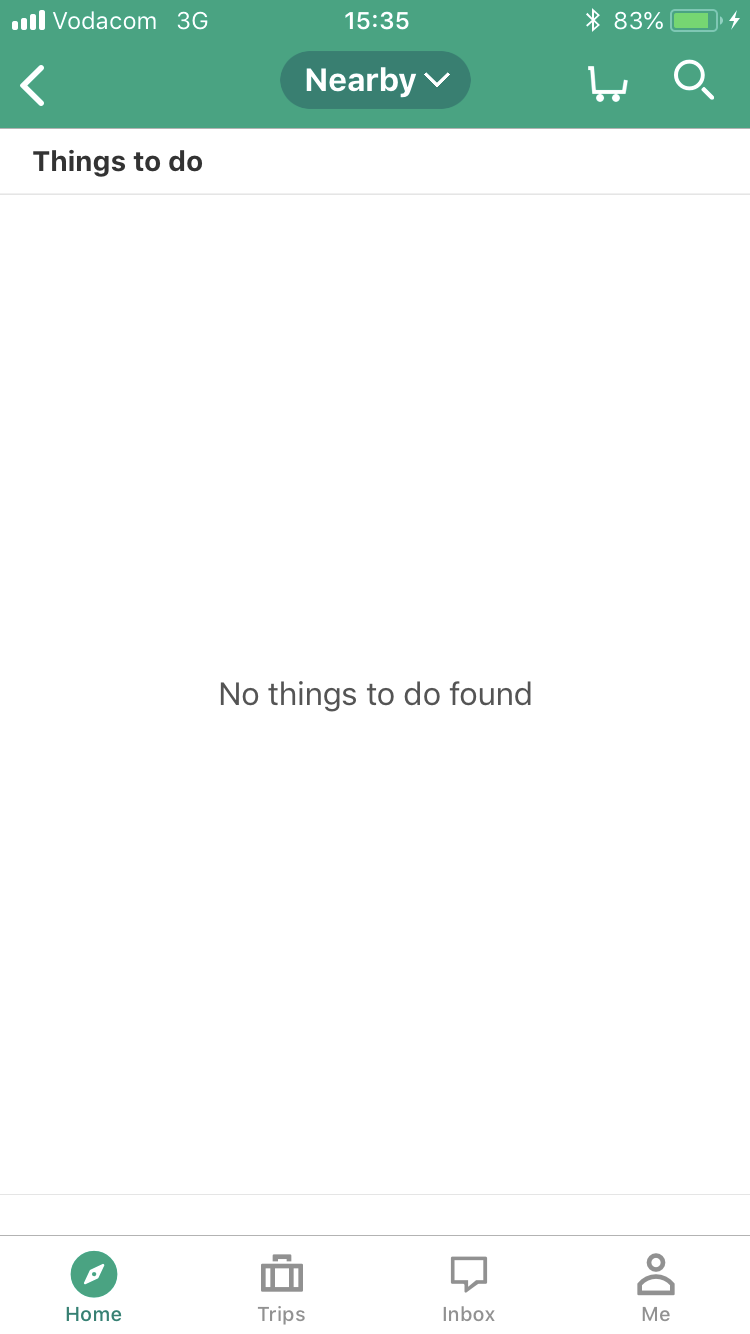 Back at Miss Chrissie’s, we chatted a bit to Aretha and Pieter, who were very warm, despite the house being very cold! It was 11 degrees outside, but they didn’t seem to notice us shivering away!

Aretha was good enough to take Bugsy off to feed her ducks, and she had a marvellous time, throwing corn for them from her own bowl. She was very excited to see that the ducks have their own little door to come in and out of the pond – big enough for the ducks, but not the geese which are, apparently, grumpy all the time! 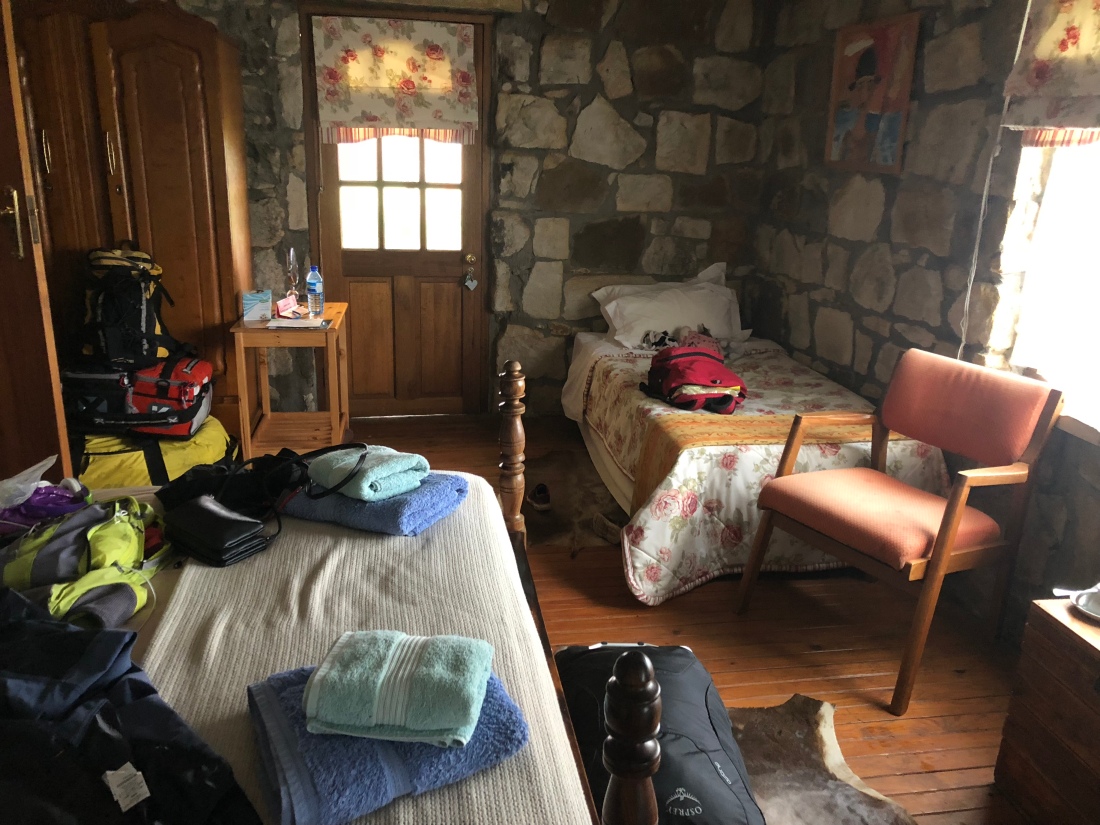 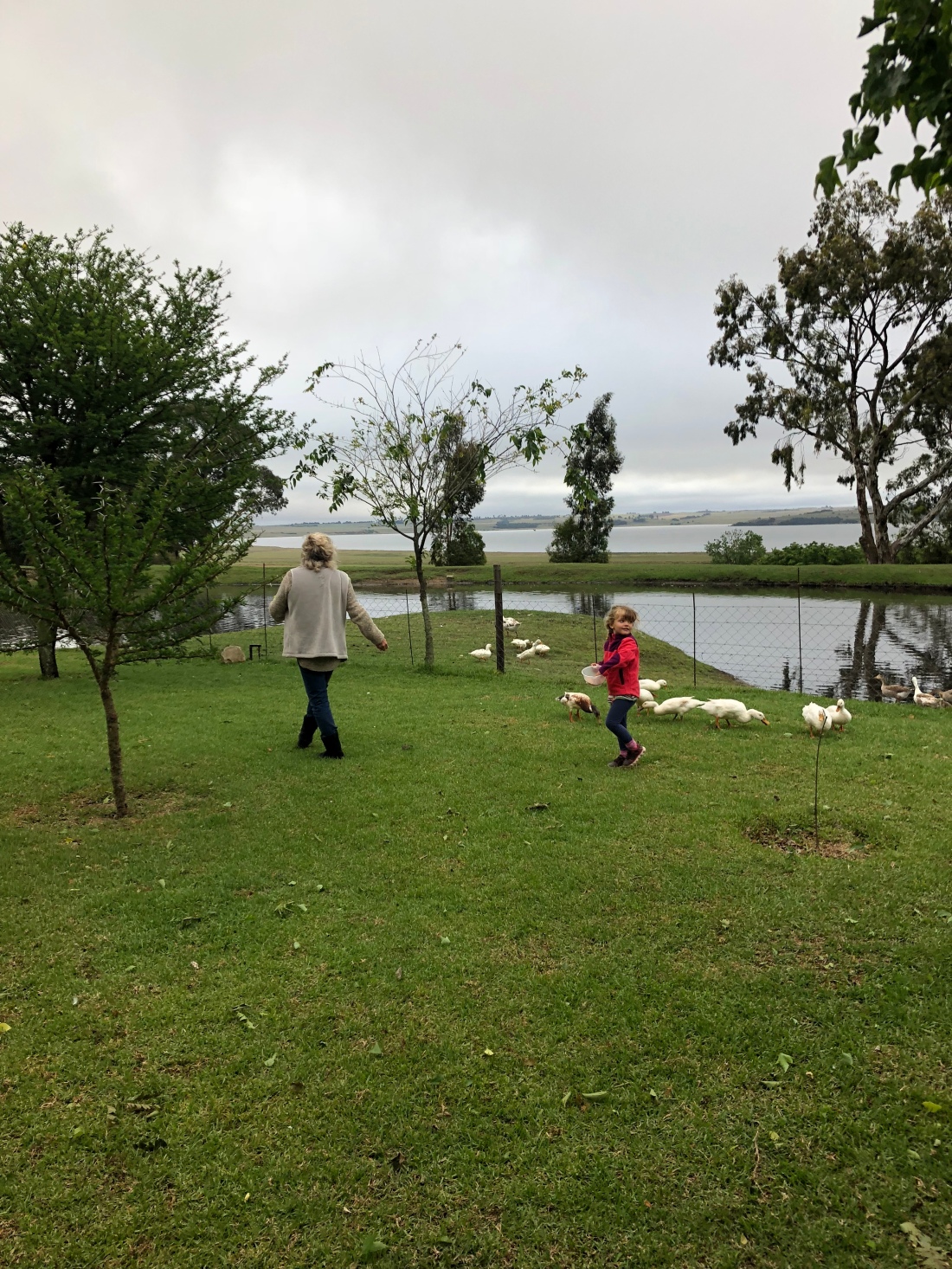 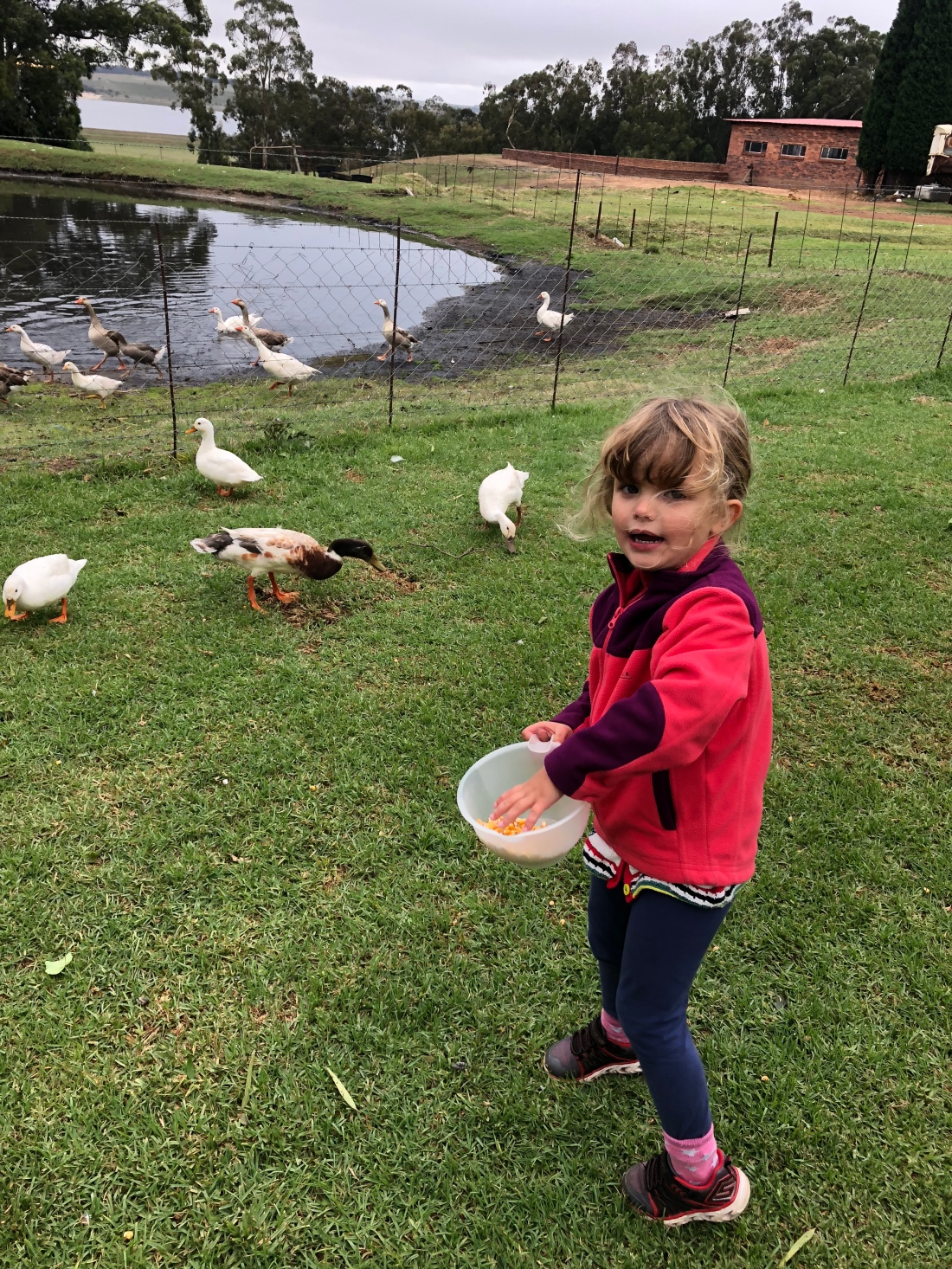 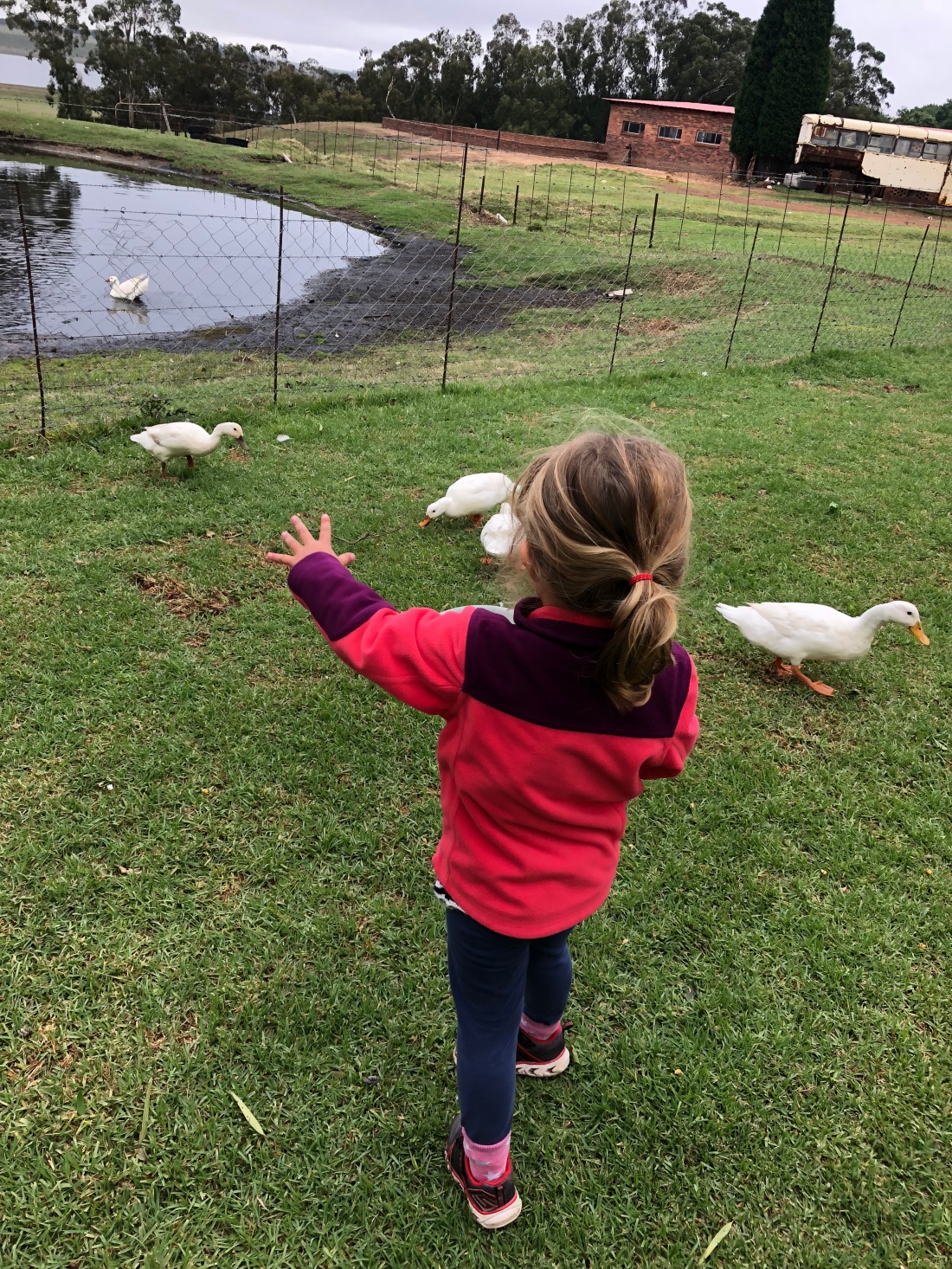 Back inside, we donned an extra layer, and relaxed in the large communal lounge for an hour or so, where Pieter was good enough to light the enormous fire, before dinner was served. Despite this being Aretha’s business, apart from feeding the ducks, we saw very little of her, and in fact it was the friendly face of Pieter that we saw most often. He proudly served our meal of chicken, green beans (cooked a traditional African way), caramelised sweet potato and rice. For the third meal that day, Bugsy did not eat very much. She doesn’t like rice and didn’t like the green beans or sweet potato, even though it was sticky with caramelisation! The only thing she liked (and she really loved it) was the chicken, so I spooned a bit of mine onto her plate, just so I was reassured that she wouldn’t go to bed hungry. Well, I needn’t have feared… After our main course, Pieter brought out platefuls of pancakes, covered in sugar and (what turned out to be) homemade plum jam. Cornelia had a screaming fit (🙄) at not having chocolate sauce on hers, much to everyone’s amusement and bewilderment, but as soon as I said we’d just take it away then, she tried a mouthful and proceeded to wolf them down without pausing for breath. She asked Pieter if she could have another one (once she’d apologised for her earlier behaviour) and he brought out another one for each of us. By this point, I was stuffed full, especially after our big lunch, but Pieter was so keen to make sure we were content, it would’ve seemed rude to leave a scrap….! 😉

After supper, we moved over to the sofa where Pieter had lit the fire earlier. Cornelia so tired, she actually asked to go to bed, and not soon after, I was so cold, I headed there too!