Great winds woke us at 02:00, with Ian battening down the hatches inside before thinking about our burning embers from last night’s fire potentially blowing around. He ventured out with a jug of water, and soaked the braii pit, so we could go back to sleep feeling safer!

An hour or so later, Cornelia (in her sleep, I think) cried out “I’m cold! I’m cold!” so I covered her with a blanket and she settled back down, while Ian and I lay there listening to the wind whirling around. The force of it ripped the inside flap of the tent’s window off, and despite trying to fix it back on, its Velcro was so worn, and the wind so strong that it wouldn’t stay put. It felt more like Dartmoor National Park than Kruger National Park!

When we woke in the morning, the skies were very grey and heavy with rain clouds. The wind had died down though, so we were able to have breakfast outside.

We were on the road by just after 09:00, with the luxury of just a three hour journey ahead of us. Bushbuckridge, a sprawling town looked promising for a trip to an ATM, as our cash reserves were depleted, but once we’d parked, we saw that each bank had queues of maybe 30/40 people deep, all waiting to withdraw cash. We decided to give it a miss and hope that we would find a less-used ATM at another town on the way. We passed Acornhoek, and its various acorn-related businesses, but this was our favourite! 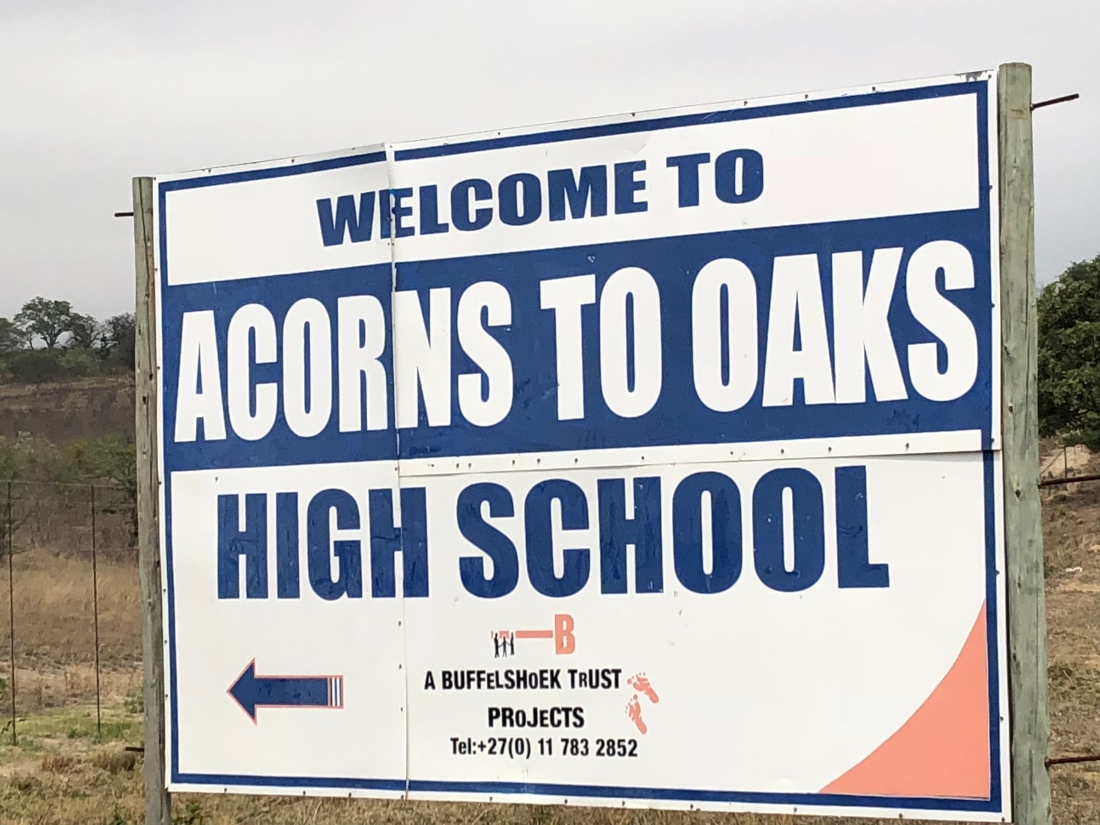 We drove up into the mountains, looking for another town that might have an ATM, and as we did do, the clouds thickened and eventually the inevitable rains started. We did, however, have more luck in Graskop, where we stopped for fuel, and although the first ATM was out of order, there was another a short drive away, with a small queue of just eight people.

Graskop is on the Panorama Route, but the mist was so thick and the visibility was so poor, that we could only imagine how beautiful it would be on a normal day!! Cash finally obtained, we went to Harrie’s Pancakes for an early lunch, where Daddy and Cornelia did magic tricks turning sugar into money, and me into a giraffe. I ordered a Boboti pancake which was really tasty, then Ian and I shared an apple and raisin pie with cinnamon sugar pancake, and Bugsy (of course) had one with chocolate sauce, once she’d finished her ham and cheese croissant. Carb and sugar overload! Adding to my unhealthy lunch, I had my first coffee in weeks. 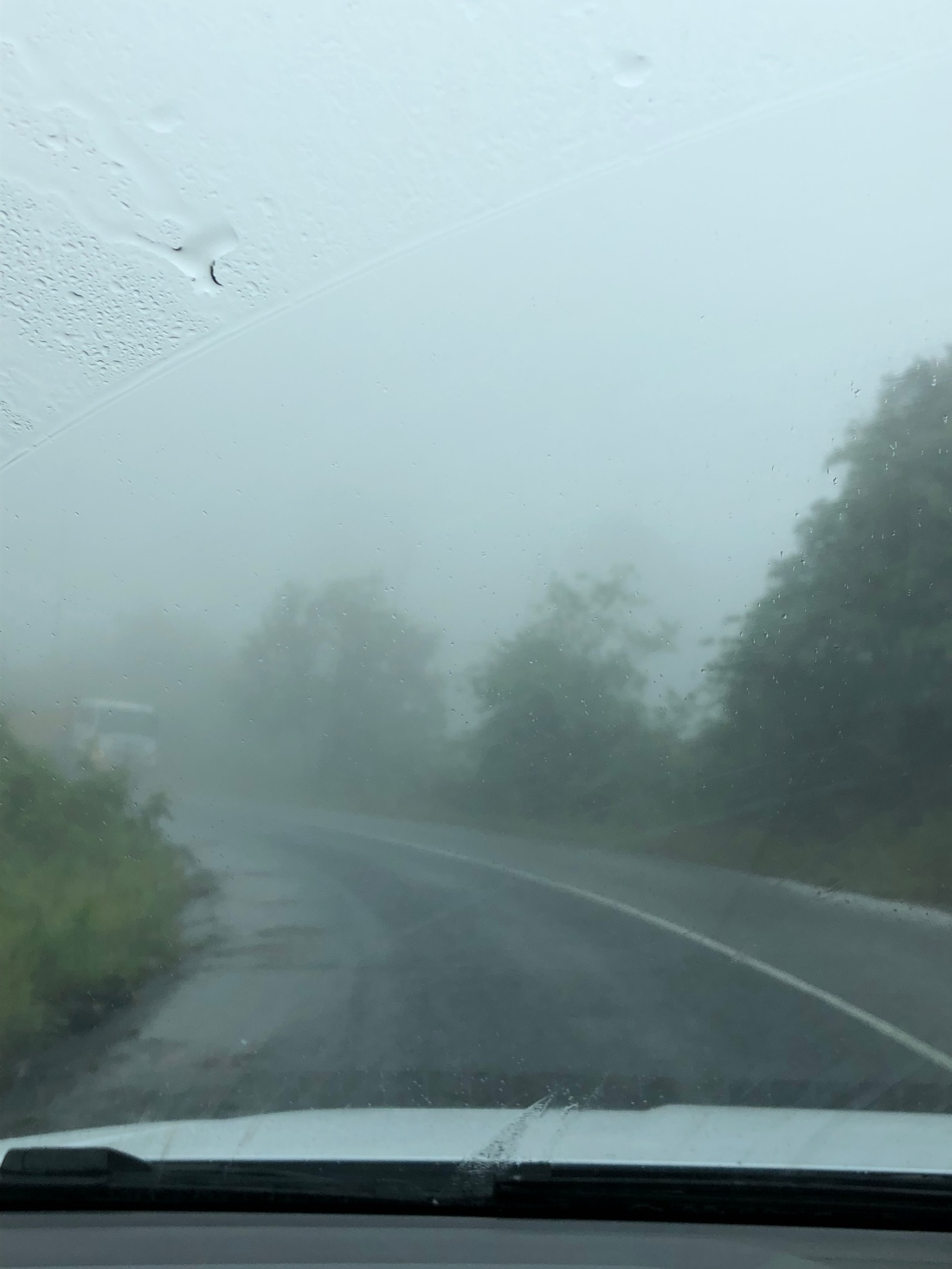 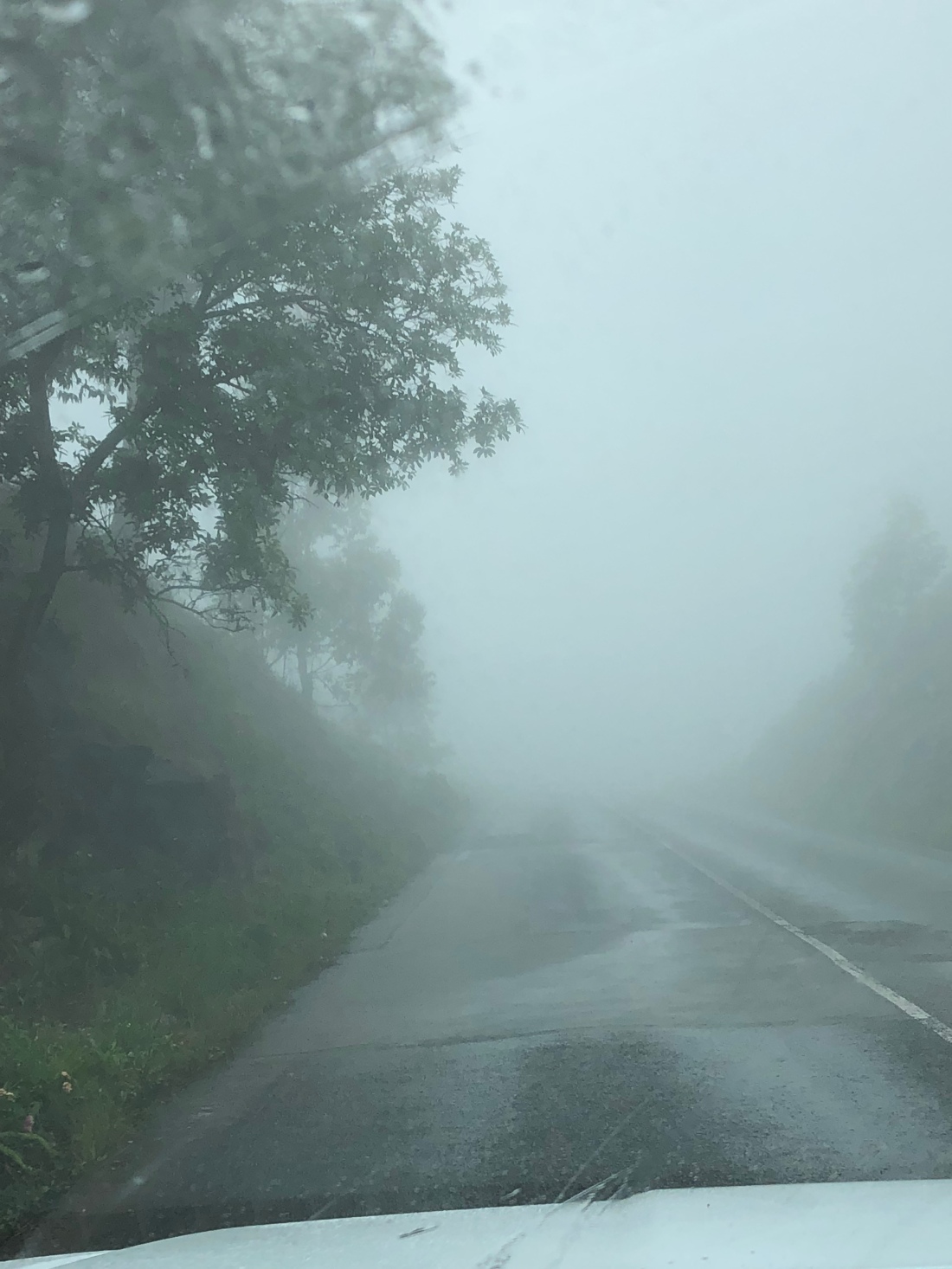 After a quick visit to the retailers of “South Africa’s Best Chocolate“, we went in search of a hairdressers who could cut Bugsy’s fringe. The first salon directed to me the one opposite… which was closed. We gave up and went on our way.

We passed through Pilgrim’s Rest, the birthplace of South Africa’s first gold rush, where the Jacaranda trees were full of purple blossom, and up Robber’s Pass, so-called because of two gold robberies that took place in exactly the same spot, thirteen years apart.

The sun had now fought its way through the clouds and we were rewarded with stunning and unusual landscapes, where the rounded hills were broken apart by huge gorges. But the sunshine didn’t last long, and by the time we pulled into Crystal Springs Mountain Lodge, the clouds were rolling in again and the temperature dropped back down to a nippy 16 degrees. Brrr… We drove the very long way to our lodge – #103 – and Cornelia relaxed watching a bit of TV for the first time in ages, while I updated her scrapbook and Ian checked his phone (again, for the first time in ages). After a cup of tea, we drove down to the Laundry and put on two loads. While we waited for the washing to finish, Cornelia went into the playpark where she bounced non-stop in the trampoline, playing Simon Says while she jumped, and putting on a circus show. The thunder started to rumble around us, echoing through both sides of the mountains, and when the rain started, we took shelter in the Games Room next to the park. Cornelia was spoilt for choice – there were cartoons on the TV, a small vegetable themed play area, various murals depicting the Jungle Book, Cars, Thomas etc, and sofas perfect for jumping on. We whiled away the time there, listening to and watching the storm roll in closer and closer until it was right over us. 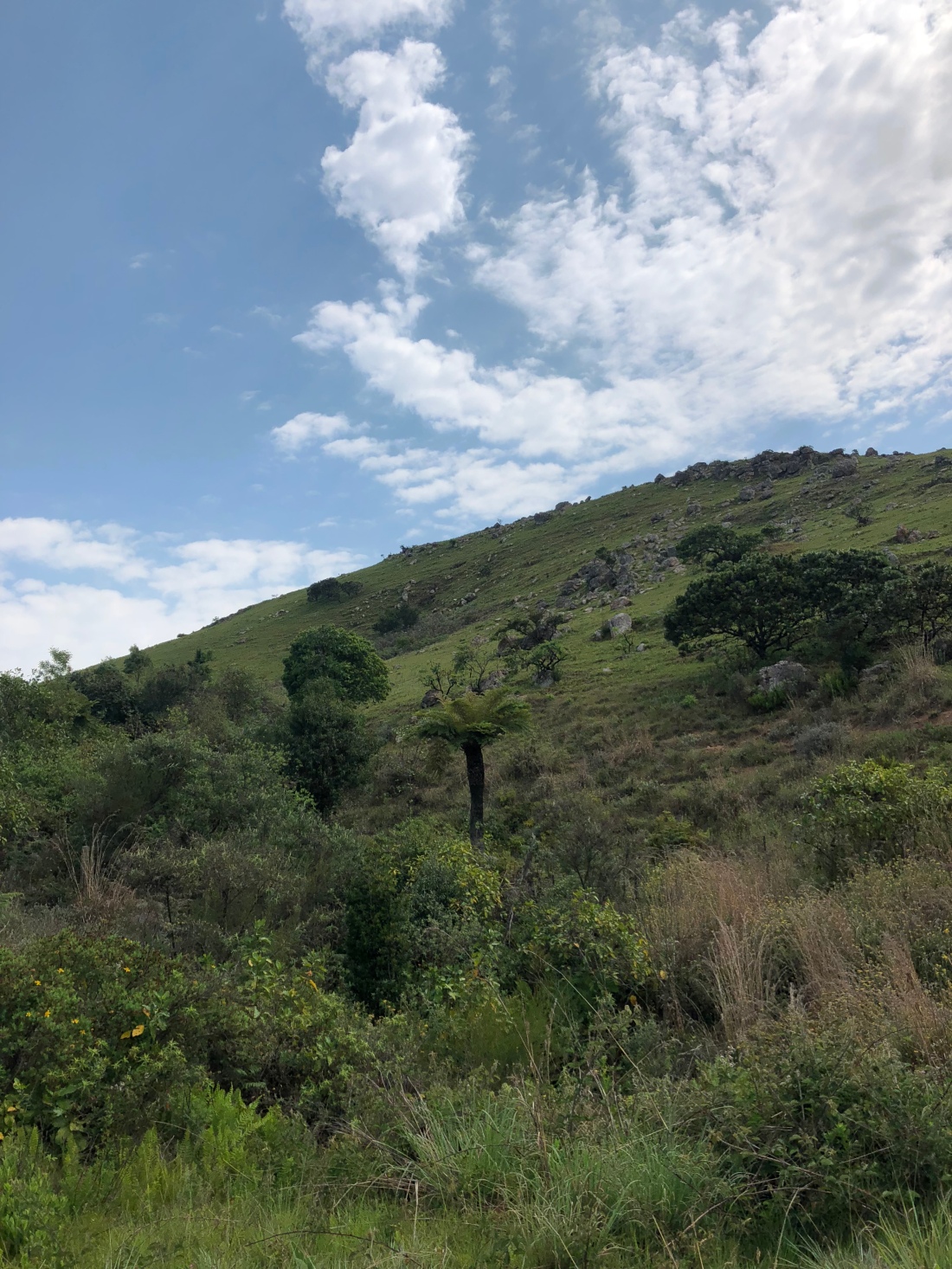 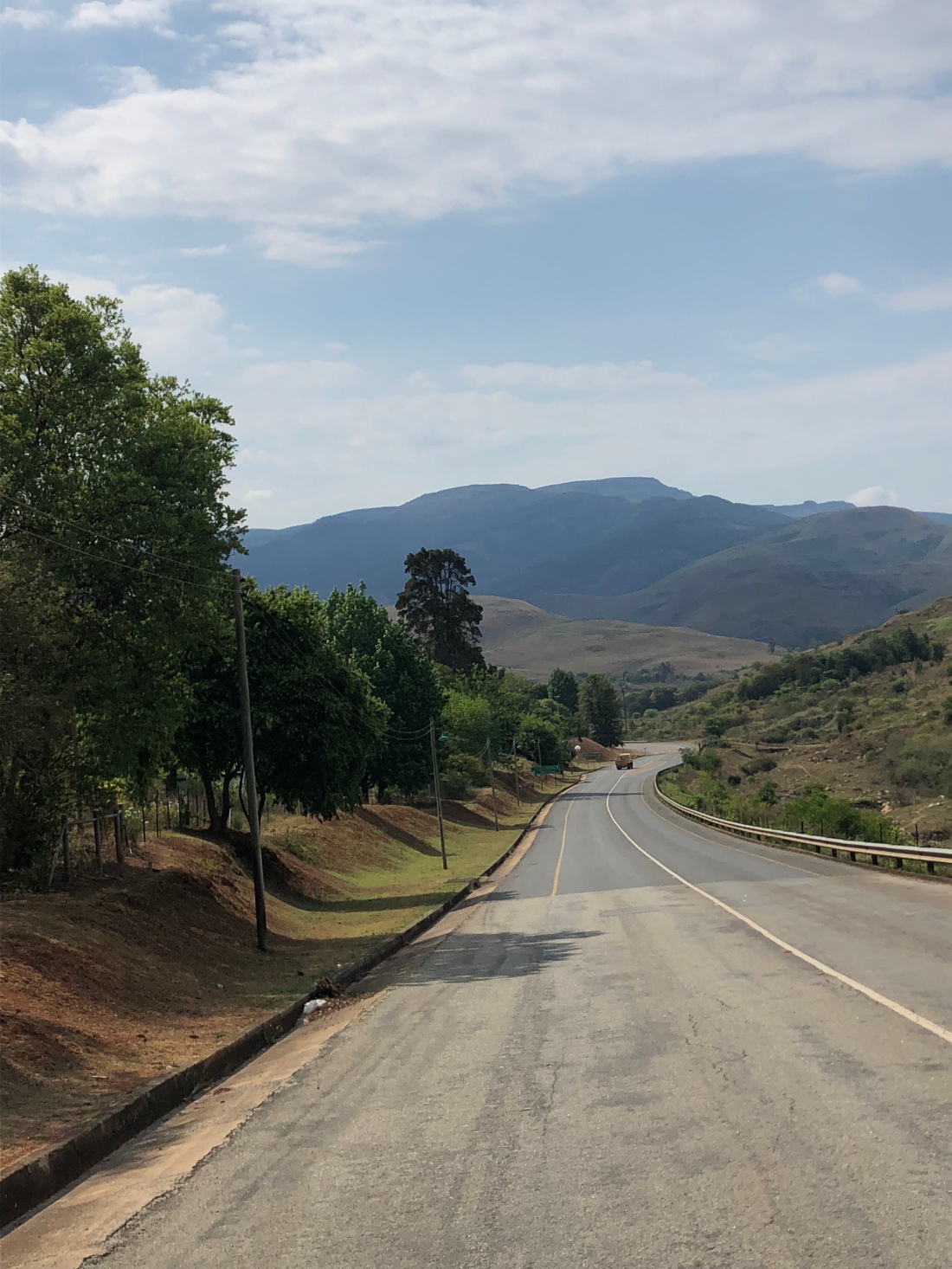 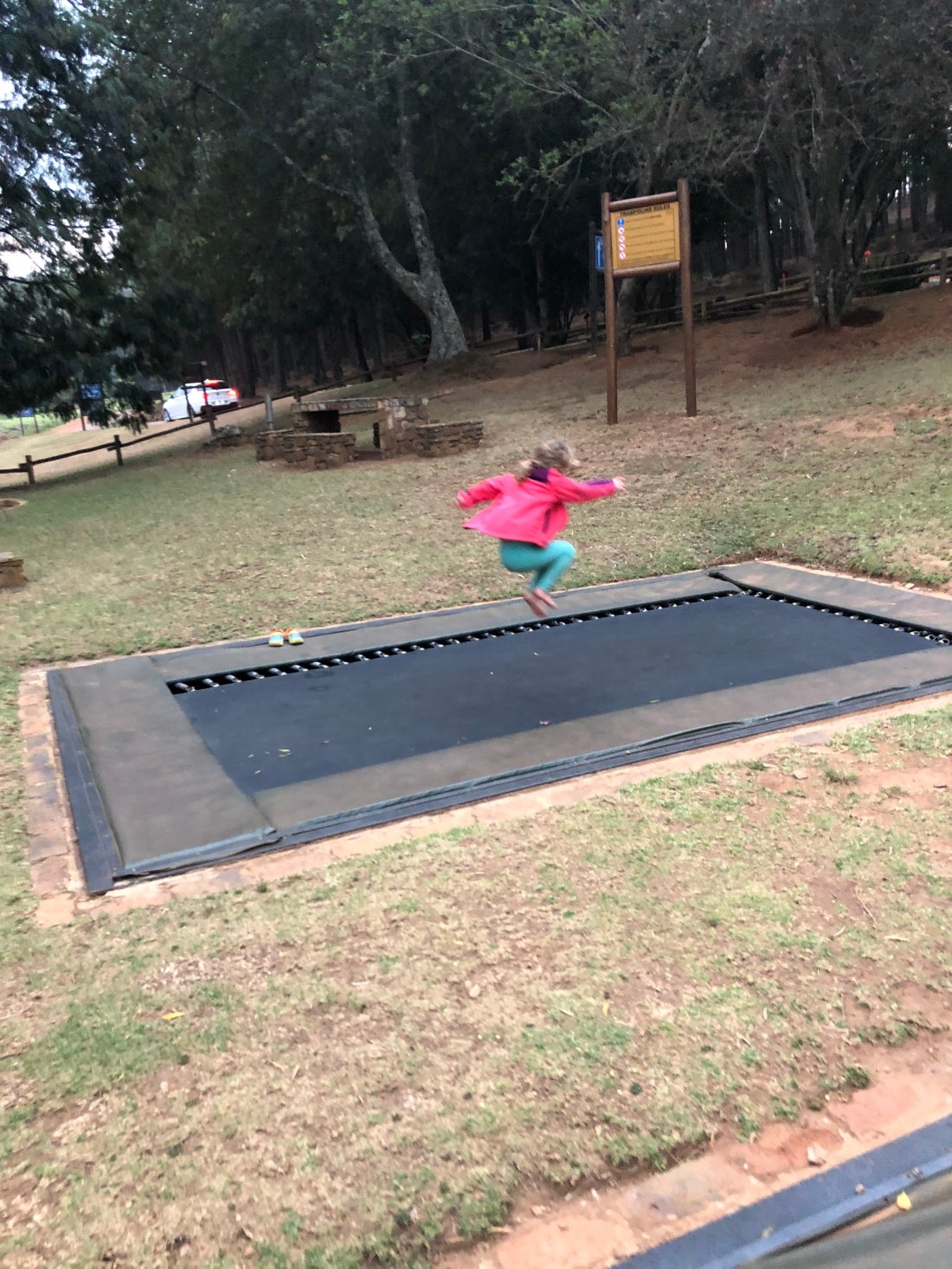 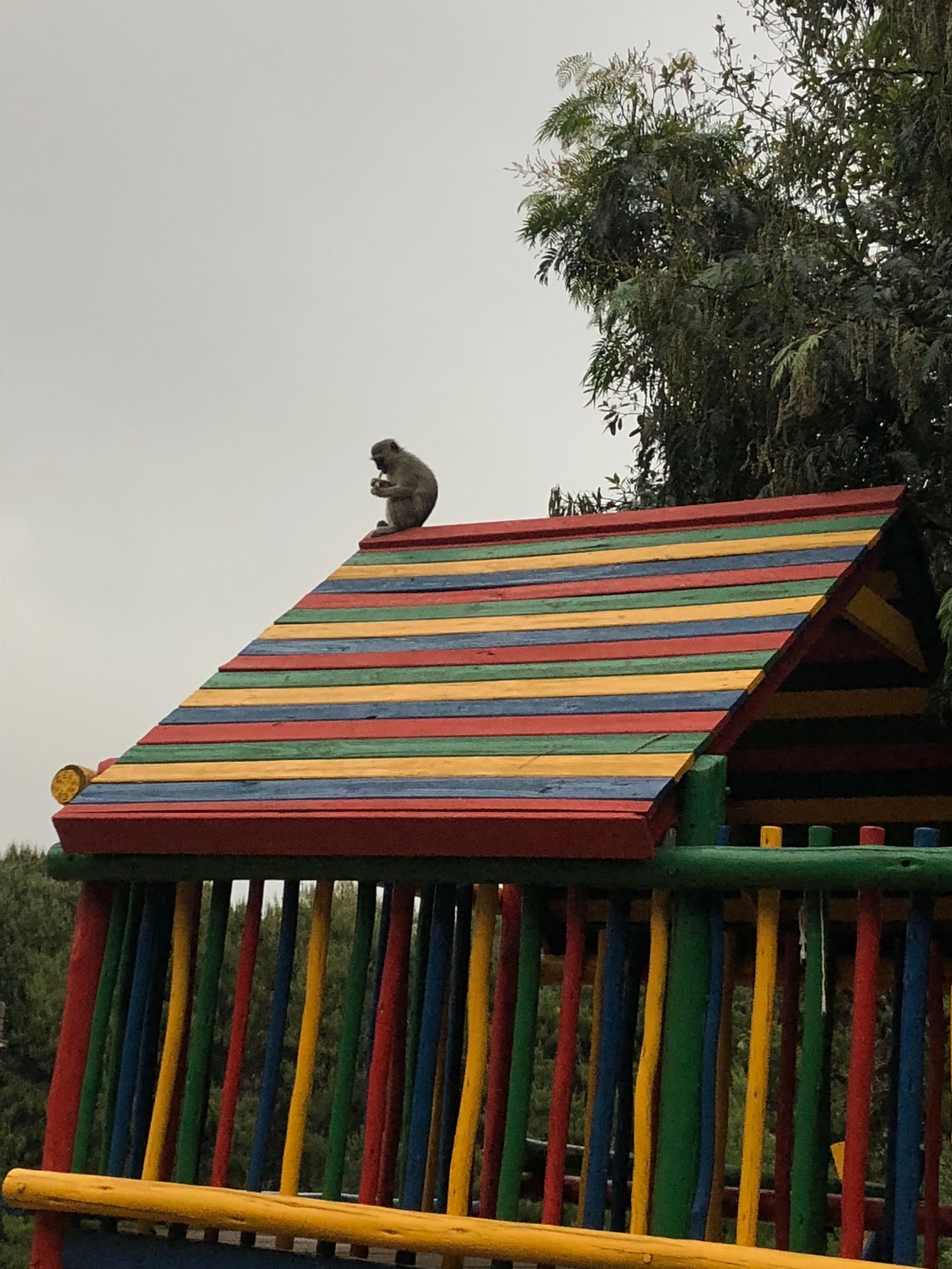 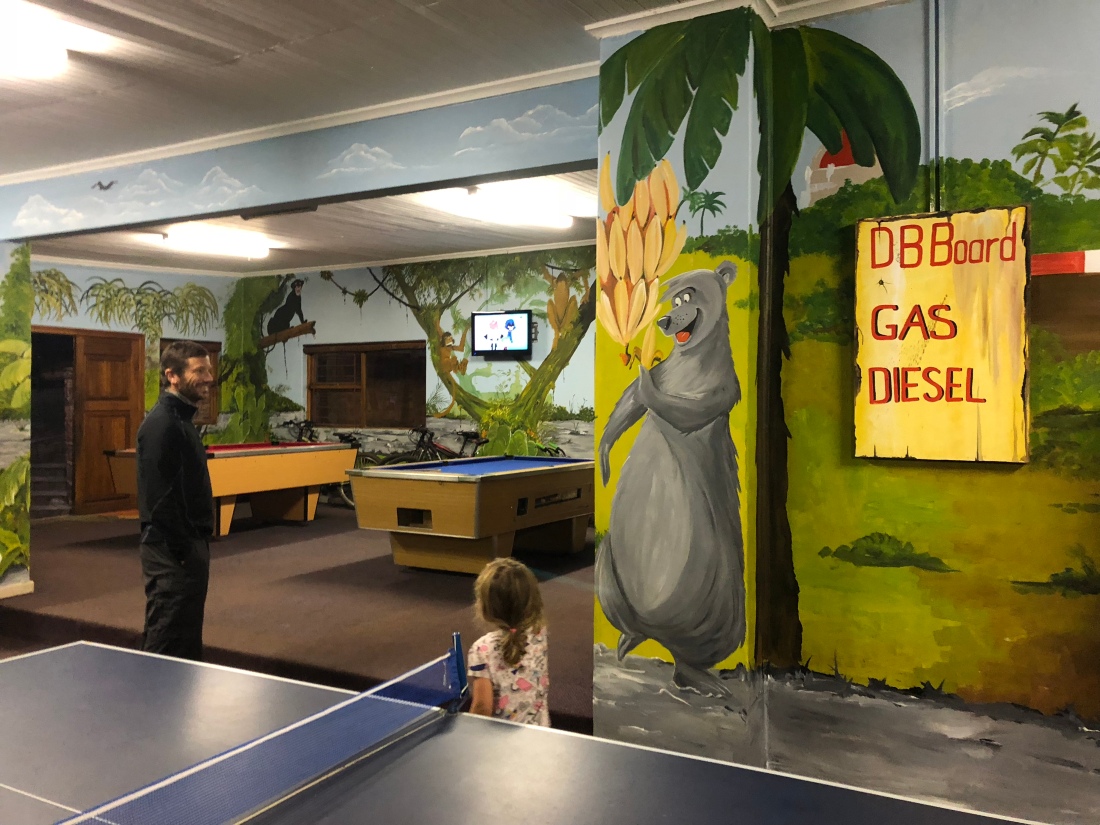 I legged it to the Laundry to transfer the washing into the tumble dryer, and then we waited another half hour for that to finish, before we left the safety of the Games Room and got drenched just climbing back into the van.

A quick round trip to the lodge to change and hang up the bits of laundry that didn’t make it into the dryer, and we drove back to Reception to collect our restaurant vouchers (we are on a dinner, bed and breakfast basis) and went for supper in the main building.

I had bought a travel Snakes & Ladders a few days ago at the Satara shop, and brought this with us tonight. Good move. Cornelia was very tired and her behaviour reflected this. She was being quite difficult and screechy, so out came the game, and we played all evening, stopping only to eat! (Daddy won eventually, but it was a very long game and very close between him and Bugsy at the end!)

At the end of the (average) meal, we were told by our waitress that we had over ZAR200 left to spend, and they didn’t give a refund in cash nor could they carry it over to tomorrow night. I’d already left a cash tip that had been swept up, so we bought a bottle of wine and four beers, donating the last bit as a tip.

As we were leaving the restaurant, Cornelia decided she needed the loo and I had a very long wait indeed. Her and Ian eventually reappeared and she was in a tired flood of tears, saying “Mummy, I was calling out for you to check you were okay but you didn’t reply! Why didn’t you answer me, Mummy?!” I scooped her up into my “big Mummy arms” (as she calls them) and wrapped her up, carrying her out to the car, still sobbing because I hadn’t heard her. A bit of Ratburger in the van on the way back to the lodge didn’t cheer her up (it was a particularly gruesome part of the story) but two songs from Frozen did the trick, and she sang one quietly to herself as Ian carried her into the lodge, which was in complete darkness. As we had parked, so all of the lights had gone out… the lightning storm (which had carried on all evening) had finally disabled our electricity. With Ian’s head torch and my iPhone torch, we assembled Cornelia’s sofa bed, and she changed, brushed her teeth and clambered on in, ready for a quick story. It was very late for her now (after 21:00) so it was just the one story tonight (How Giraffe got his long neck) and she fell asleep within ten minutes.

Ian sorted the laundry out while I distributed the chocolates I’d bought earlier. Obviously, I haven’t sampled all the chocolates in South Africa (yet) but these ones were really more-ish. Thank goodness I’d only bought two each!

Then, it was blog update time and bed!

One thought on “Wind, rain, mist, thunder and lightning!”