Apart from Cornelia crying out “Mama! Come!” and then immediately saying “”No, it’s okay, I don’t need you.”and then at 02:00 sleep talking “Stop the baby caterpillars from climbing up the tree!”, it was an uneventful night! Ian and I were both awake by 06:00, and got up to do the washing up from last night, using two kettles’ worth of boiled water to wash and rinse! Ian managed to restart the fire from last night too, so we sat and had breakfast together, feeling very organised before Bugsy even woke up properly! (She had woken briefly when we got up, but went straight back to sleep.) Dare I say it, but it was nice to enjoy a cup of tea in the morning peace! 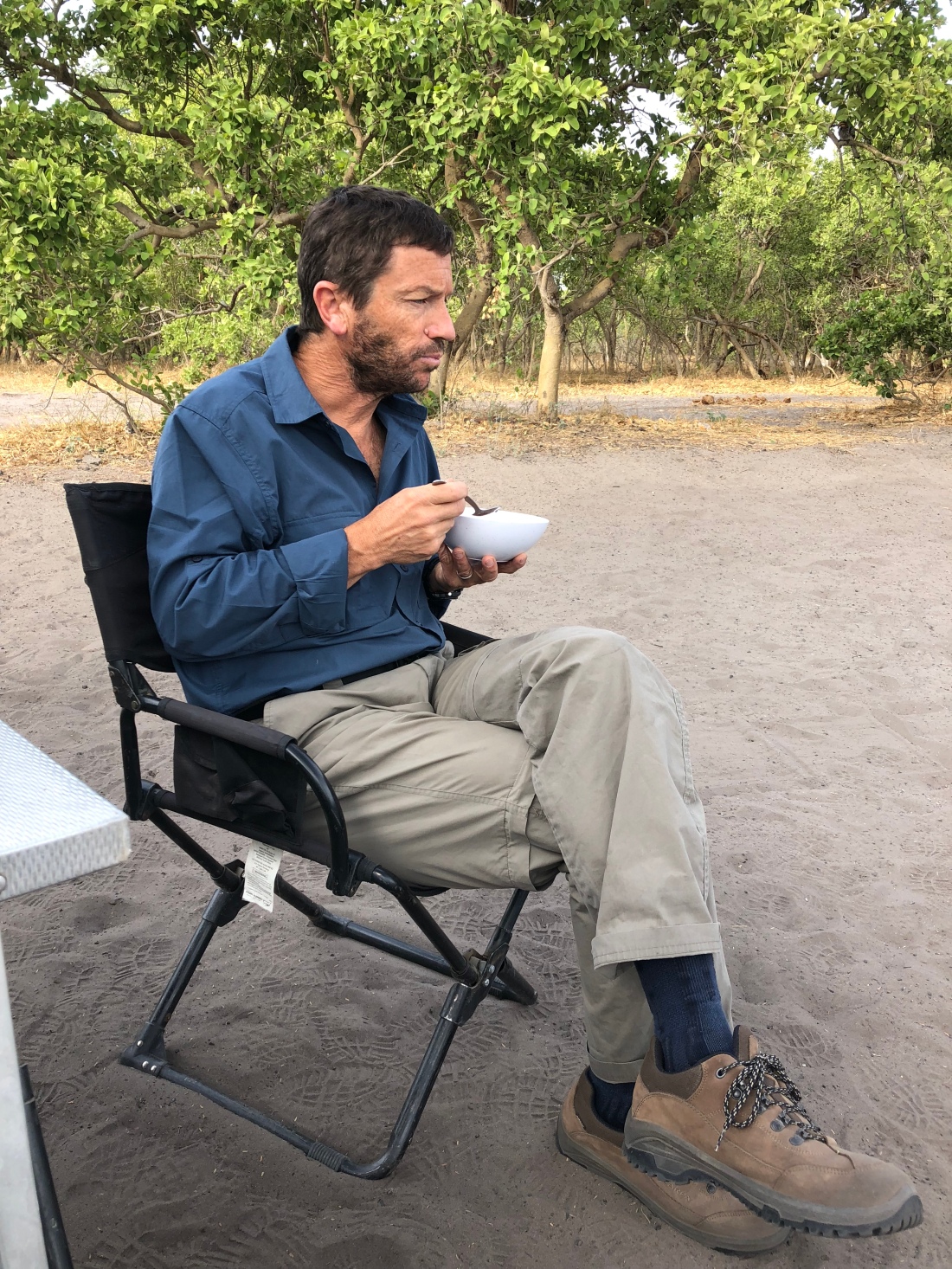 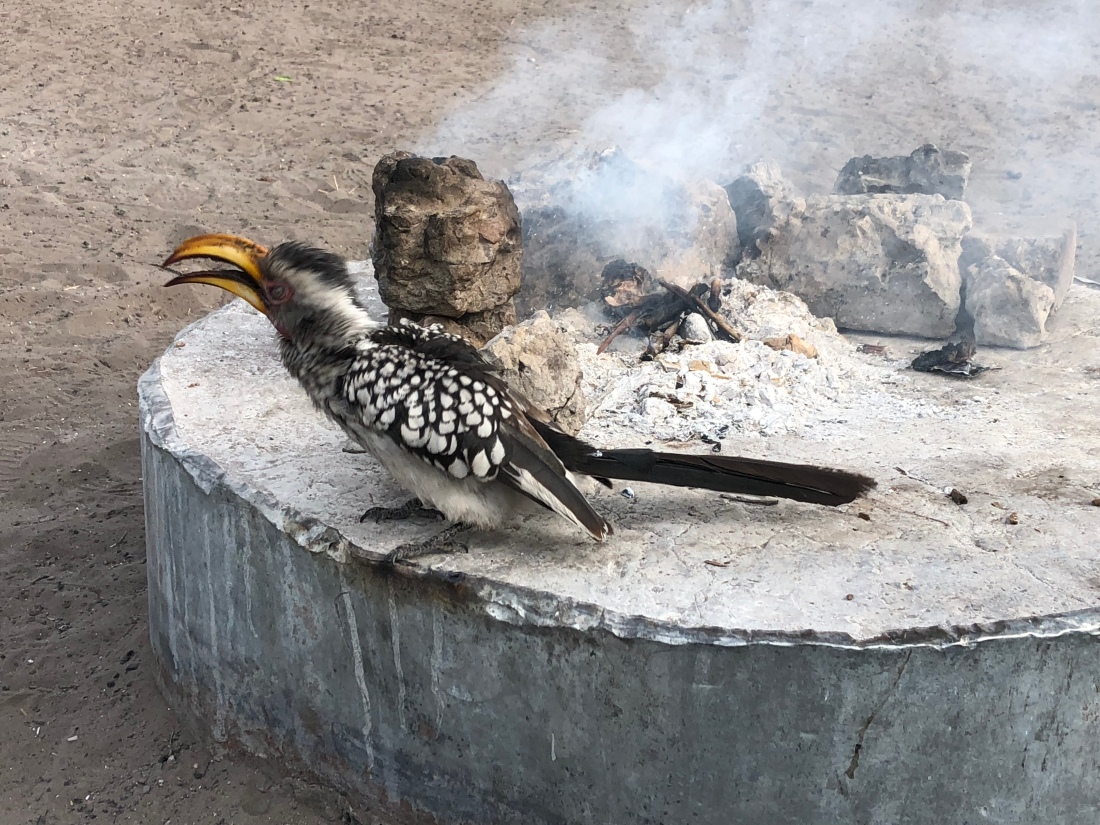 We banged around to wake her up just before 08:00 and she happily dressed and ate her breakfast, then went off hunting for a new stick, doing her best to stay clean.

I made sandwiches and washed up the breakfast dishes while Ian closed down the tents and went to brush his teeth. When he returned, we were ready to leave, stopping off at the ablution block to brush our teeth and once again, we were off.

The road out of Savuti and towards Ghoha Gate was sandy and very bumpy. Ian was driving and at one point, we took off and landed very heavily! We could hear all the chairs clattering around in the boot and wondered what other damage had been caused!

What blessed relief it was to finally hit the tarmac again after 80kms of bumping around. We enjoyed the final 95kms of the drive on smooth roads, with 60/80kms/hr feeling very fast and we watched the distance tick down more quickly than we had done for days! 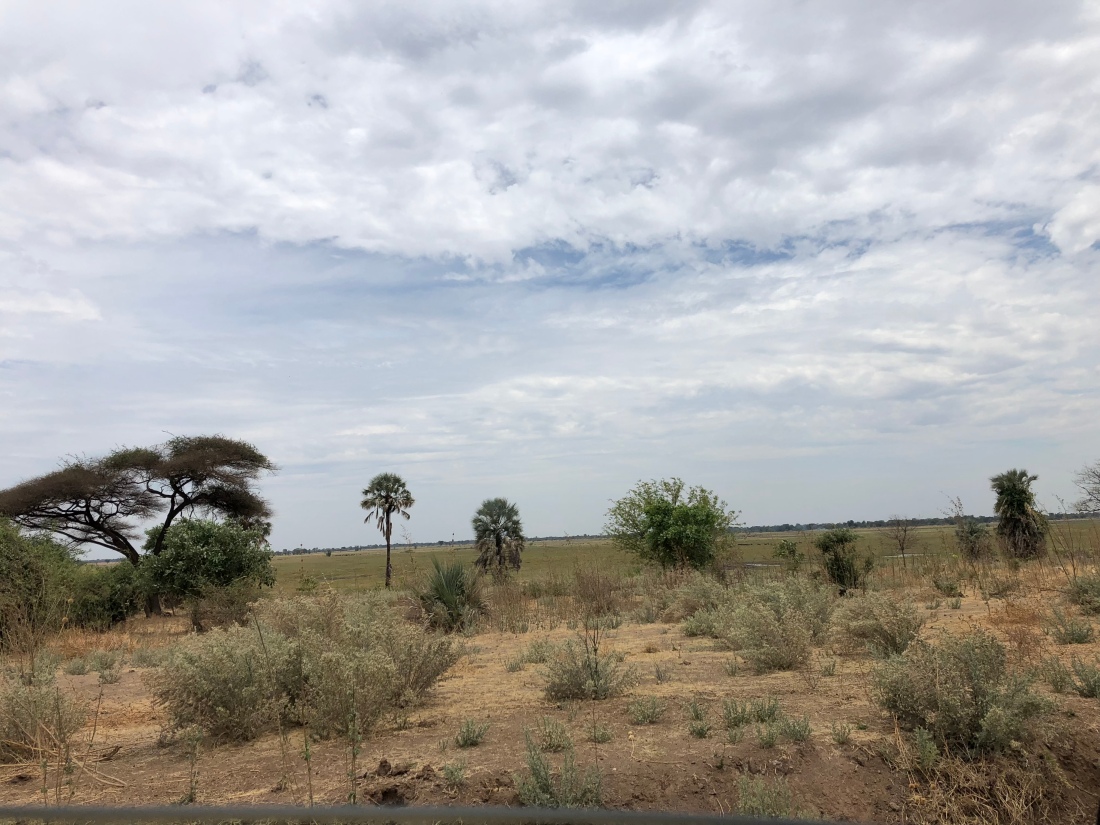 On arrival at Kasane, we parked up at The Old House where we were greeted and taken to reception. Check in was nice and easy, and our room (9) is a decent sized room with a double bed and two singles. There is blissful air con, not that it’s needed, as the temperature is still remarkably low for this time of year (about 27, we think – the car temperature gauge is broken…) and mosquito nets over all the beds. 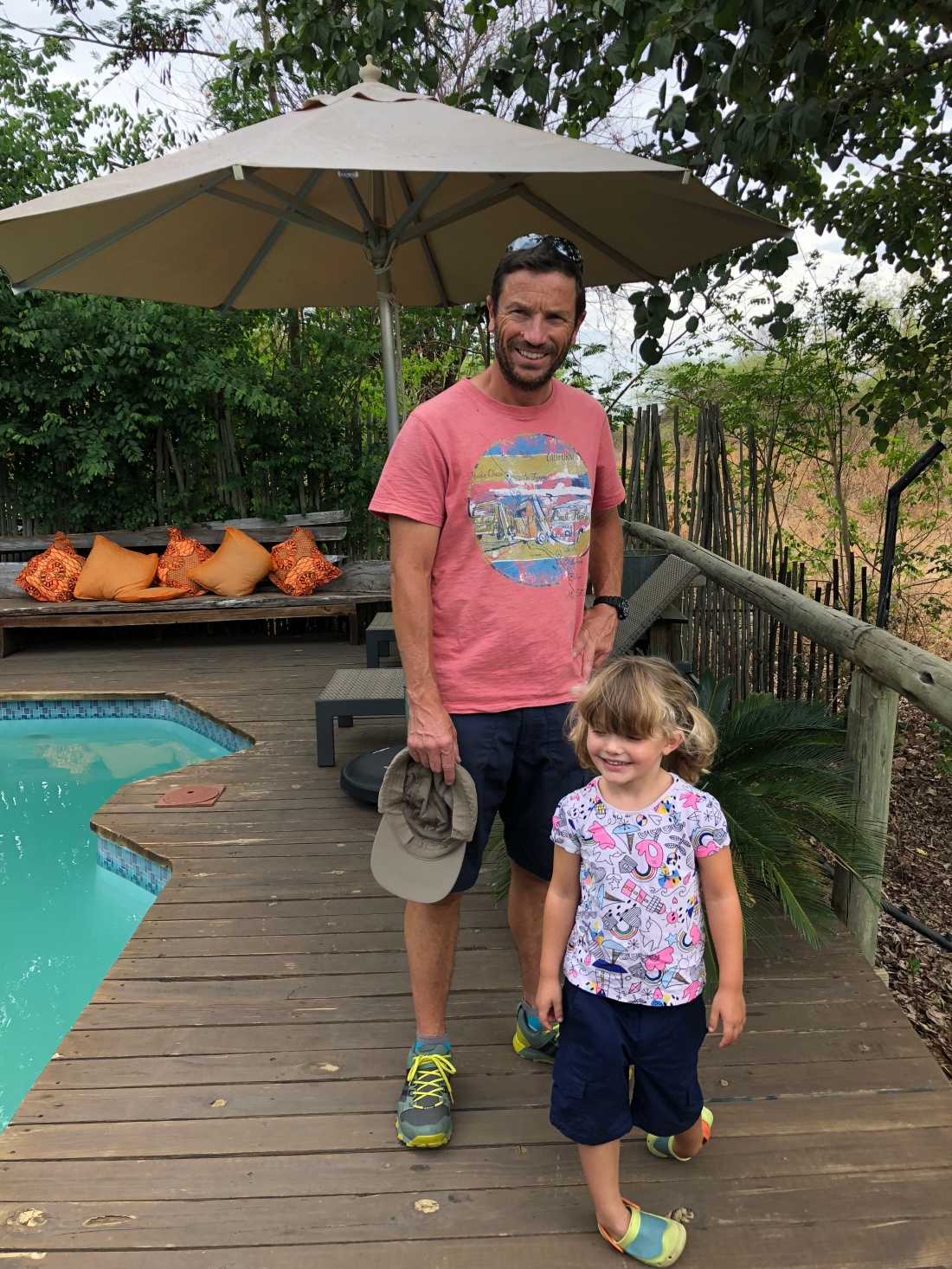 We had plenty of time to eat our lunch sandwiches that I’d made this morning, and sort out laundry for a wash. Cornelia has been wearing leggings to keep her warm, and I only packed a few pairs, on the basis that she probably wouldn’t need them!

At 14:45, we went to reception again, to be met by Rems, our riverboat guide for the afternoon. We spent three fabulous hours cruising along the Chobe River, and as much as we enjoyed our trip with Amos along the Kavango River, this was even more impressive and enjoyable.

First, he was incredibly knowledgeable and enthusiastic, and all of us (there were two Belgian guys on the boat with us too) learned loads. We went occasionally at great speed much to our delight, and then slowed down carefully as we approached the animals.

Our first new animal was an African buffalo, one of the Big Five, and not to be mistaken for a water buffalo, Rems was quite clear! He said that this is the most dangerous of the Five, as he doesn’t give a warning call. An elephant will charge towards you, then stop dead and stamp his foot in front of you, to scare you away (yeah, that would do it!), and the others make noises etc. But these buffalo will just charge you with their enormous heads and horns. The females have smaller flatter “bosses” than the males, which protrude quite noticeably, but they are rock hard! Rems said you could fire five bullets at them and they would be completely fine (if not a little angry!).

Then, we came across something quite extraordinary and exciting. A dead elephant lay by the water’s edge, and he was surrounded by crocodiles, who were busy chomping their way through him. One crocodile performed a death roll which, Rems explained, is how they would pull off a limb to swallow it. Gross but utterly fascinating to watch, despite being only a few metres away from the spectacle. We learned some more about crocodiles: as they are cold-blooded, they face the sun to warm themselves up and lie there with their mouths open, to let cold air out and to breathe in the warm air. They are also opportunistic feeders, lying still and waiting for food to arrive. When they catch fish under water, they use their palatal valve to stop water going into their stomachs, hold it all in their mouths until their heads are above water, then they can eat the fish as this useful valve opens. (His head has to come out of the water to eat.) It was fascinating listening to him.

Our next stop was a pod of hippos, one of which to exception to us and swam towards us, leaping up out of the water as much as he could which itself was a sight to behold. Adding to Amos’s teachings about hippos, Rems told us that the young male is allowed back to the family, as long as he is submissive to the dominant father. 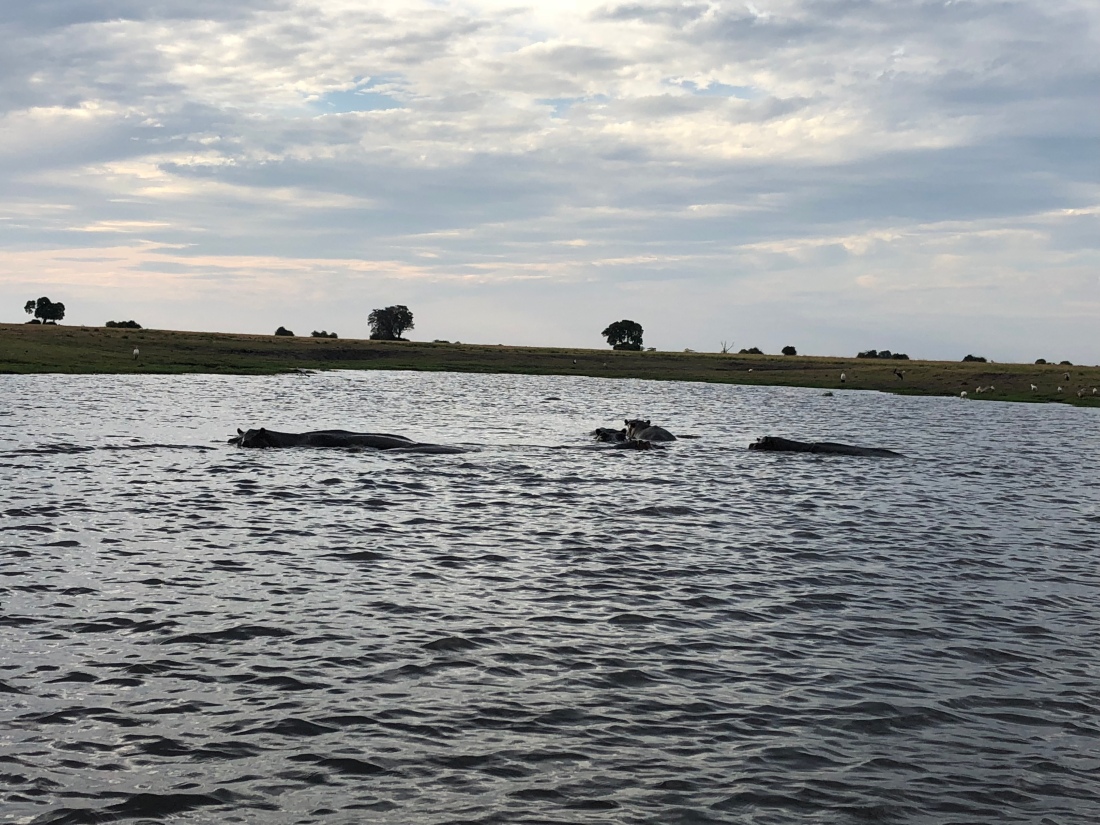 We moved on to watch some elephants on both sides of the river. Cornelia asked Rems why they have tusks. There are two main reasons: To loosen compressed or hard sand and earth, which they mix with water to have a mud bath; and to scrape roots that are tough or hidden underground so that they can eat them. Watching the elephants lumbering down the hill, raising their trunks to smell for danger, and then drinking from the water was mesmerising. I could have stayed there quite happily for hours. 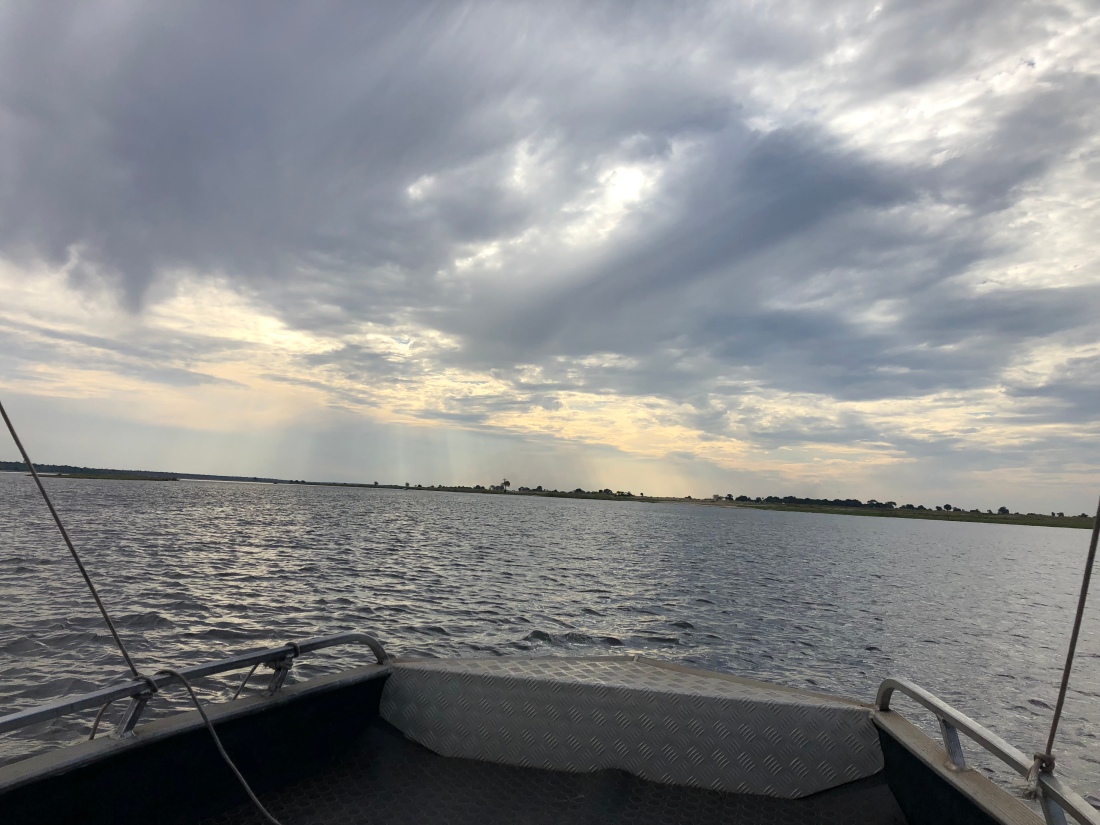 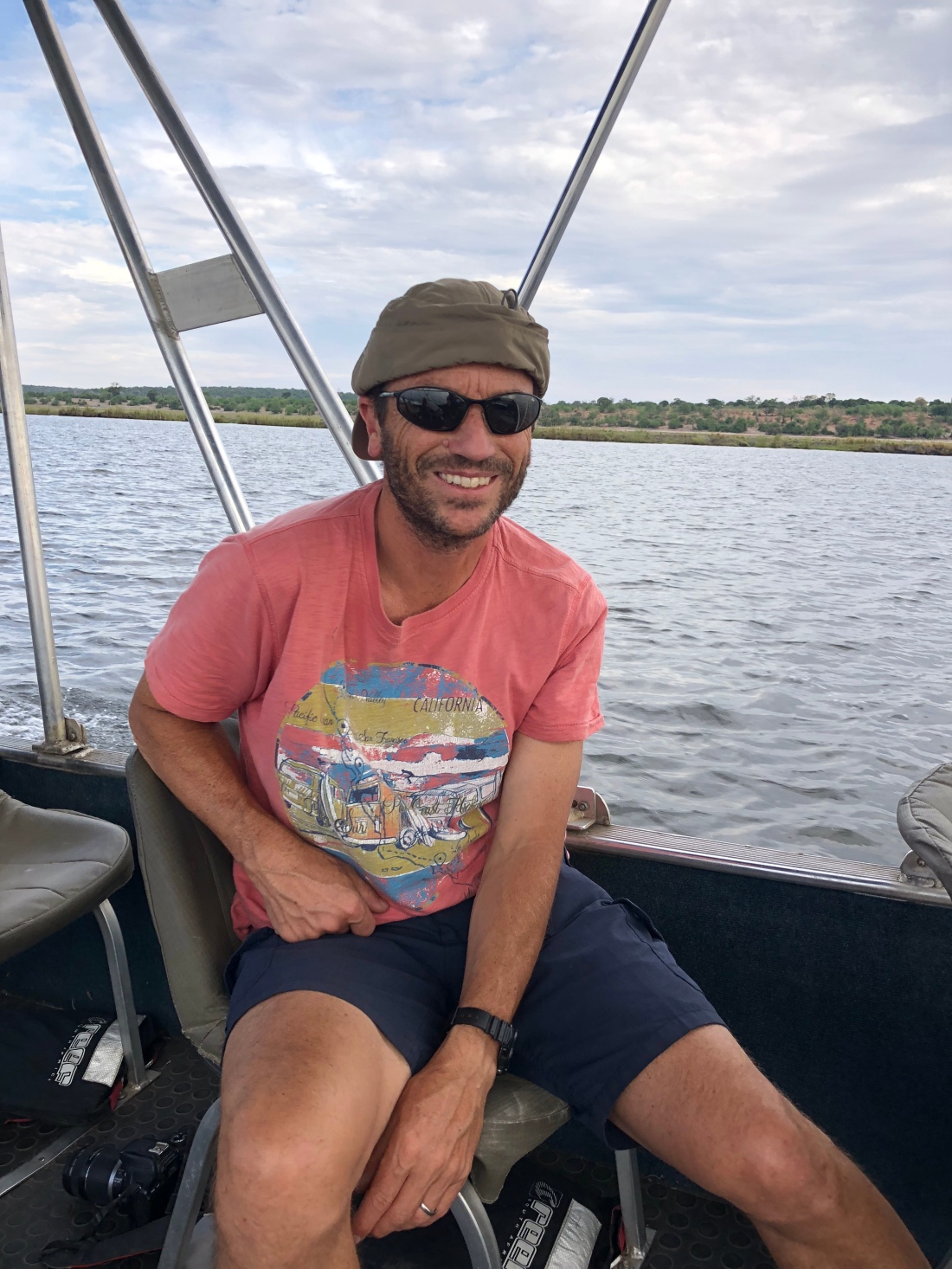 Alas, Cornelia needed the loo and our time was running out, so we stopped off briefly at the National Park entrance where they had a loo she could use, and then Rems returned us all back to The Old House. 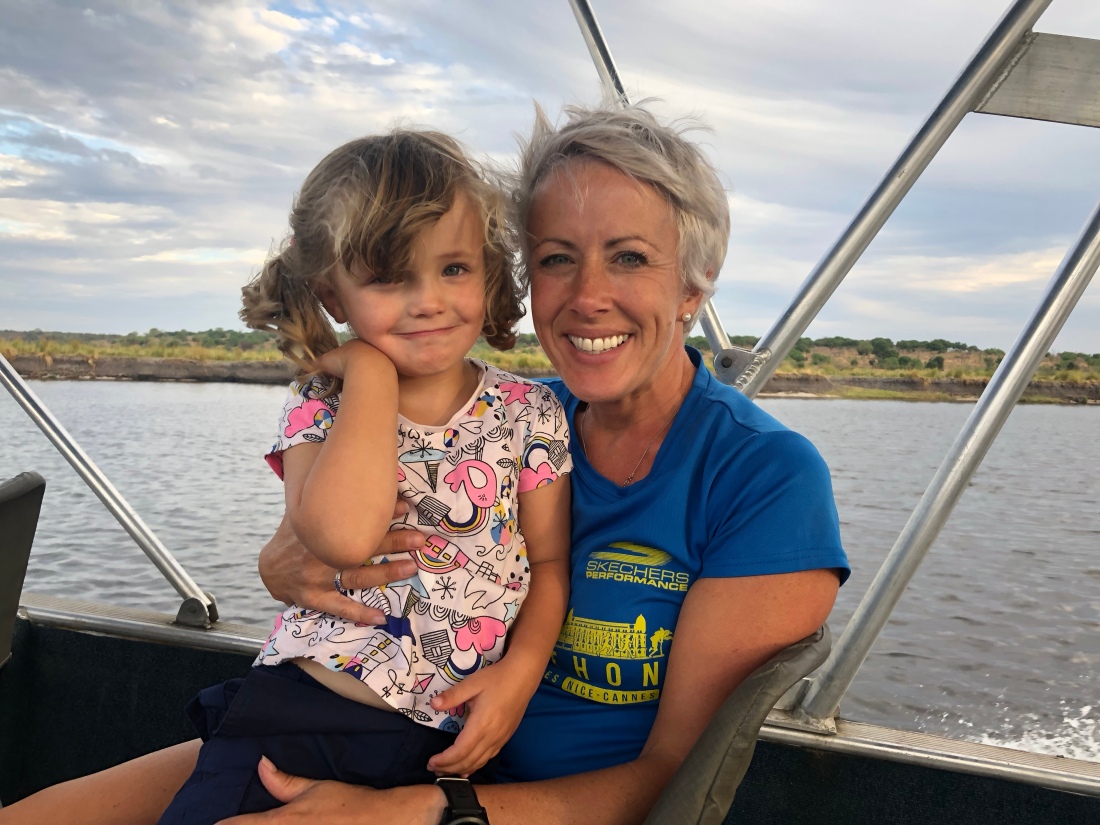 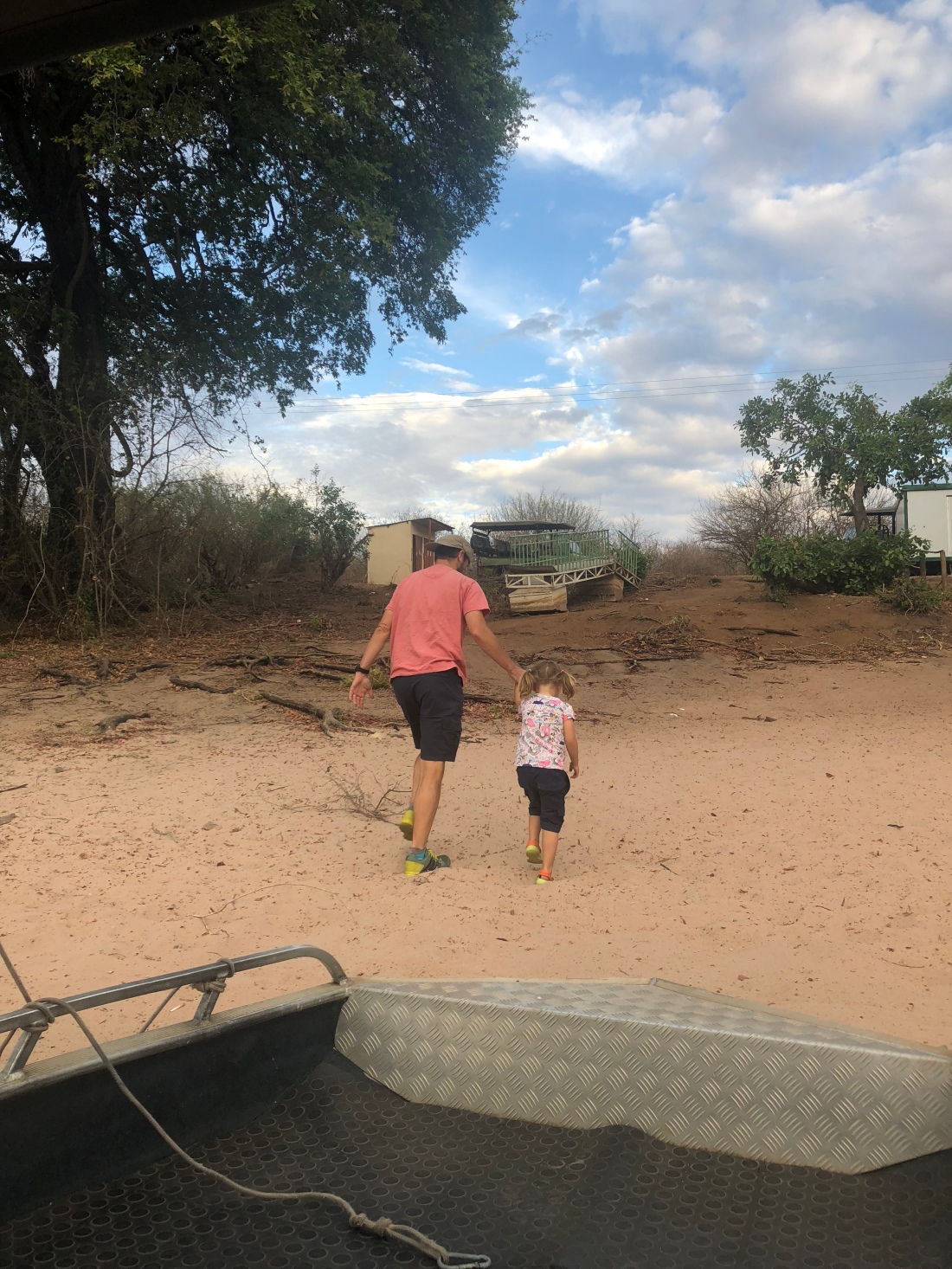 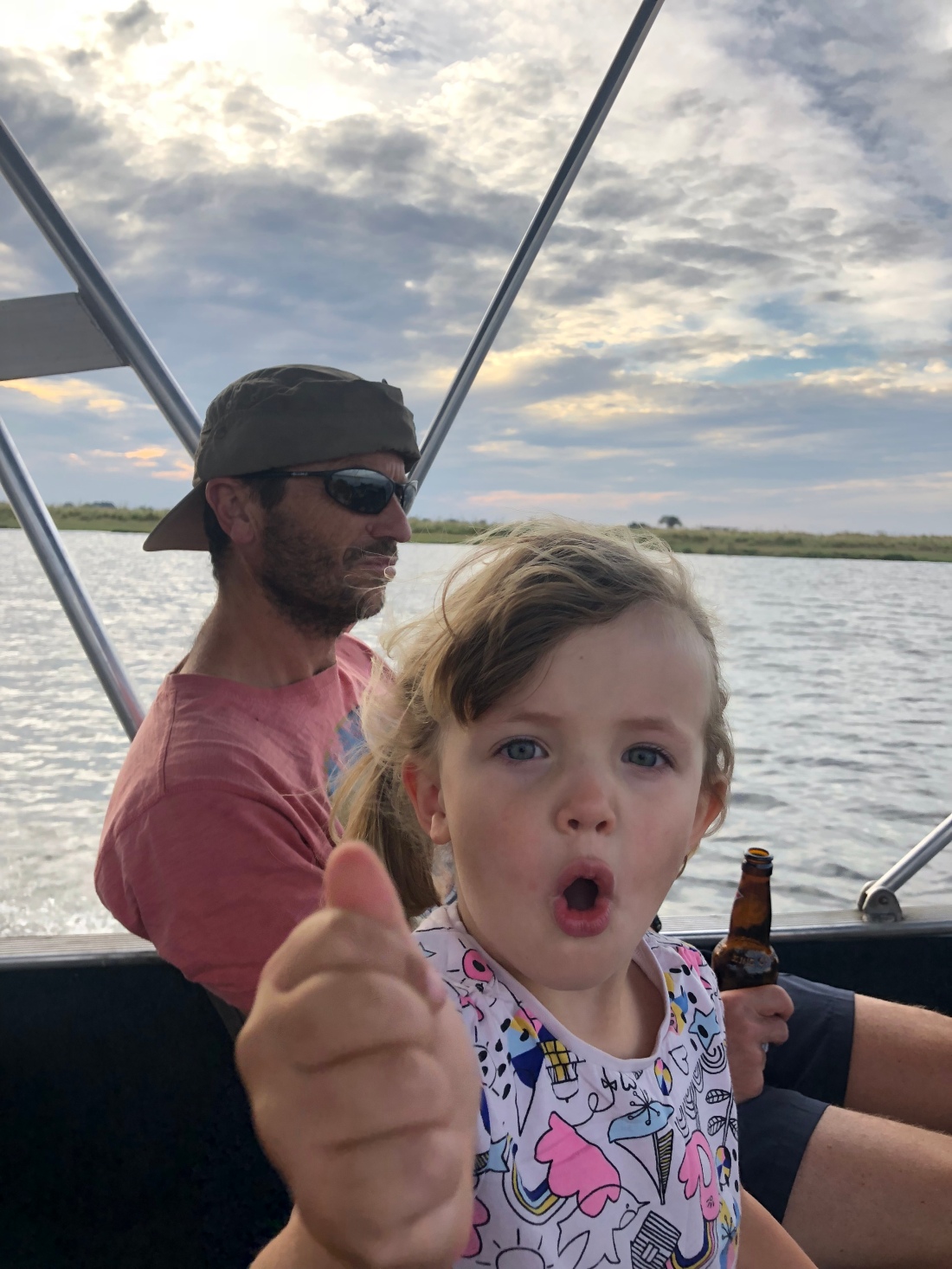 We had enough time to shower before dinner, where I indulged with a sweet and sour pizza, Cornelia had chicken and chips, and Ian had fish and chips. It was all very tasty, and along with a bottle of wine that we drank, I felt very full by bedtime! There was supposed to be WiFi here, but the limited access we have had has not been sufficient to be purposeful, so it was another early night for all of us! 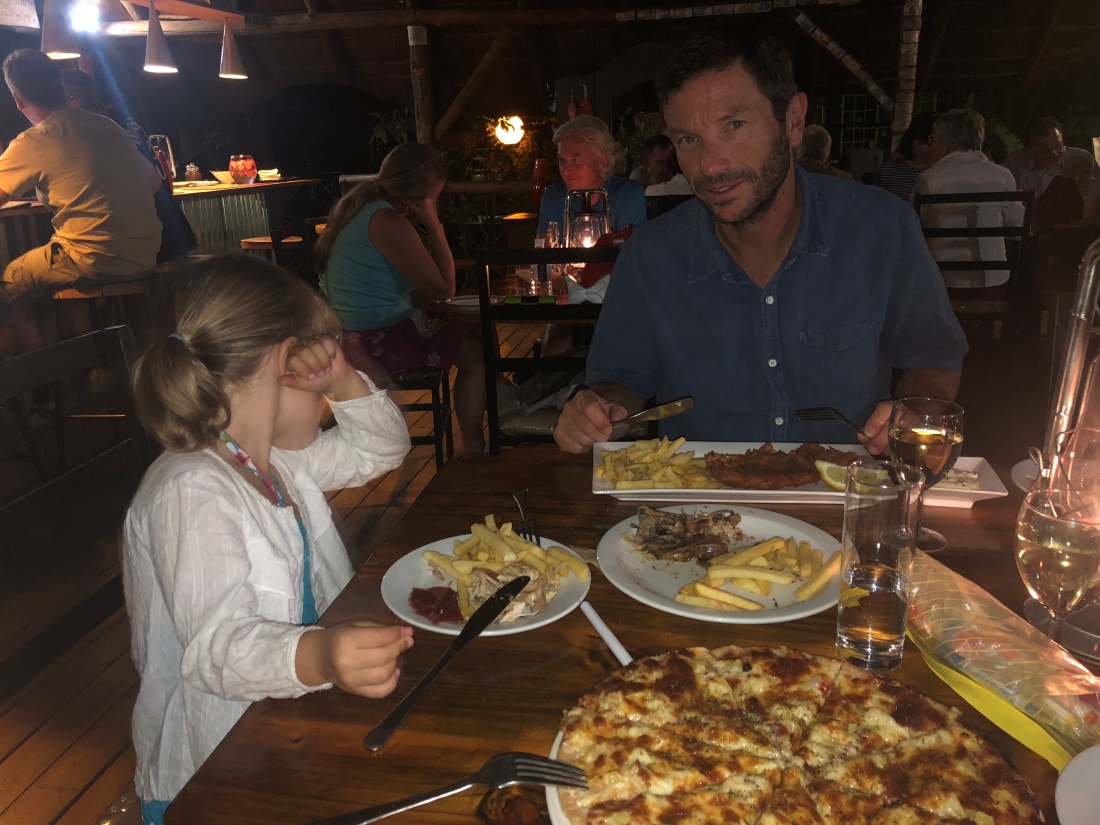