We had a very early start today, woken by vervet monkeys clambering all over our van and tents. We felt perfectly safe, however, until Ian looked out of his side of the tent and saw that they had managed to open the metal locks and subsequently the door of our food store/kitchen! I leapt out of the van, naked but for a pair of pants, and yelled at them, making them run off with just, so far as I could make out, a half packet of dried beans/lentils etc that I’d used for a casserole earlier in the trip. And then, I spied a group of campers who’d been out for an early morning walk. And there was me, charging around semi-naked, yelling and waving my arms at monkeys. Oh good grief!!! 🤦‍♀️

The night itself had been exciting, listening to the howls and growls of various animals, with Ian and me occasionally looking out to see if we could spy anything. At about midnight, a small elephant even came wandering by, tearing off branches from nearby trees.

The monkeys hung around for most of the morning (well, as much of the morning as we were there) hunting for and scooping up the tiny dried pulses, but finally disappeared as we packed up and left them behind us. Pesky little blighters.

We were on the “road” by 08.30, surely a record for us! I was driving today, getting a bit more 4×4 experience, and we bump bumped our way across The (log) Bridge over the River Khwai, and on to Savuti, in Chobe National Park, without any sighting of David Niven. This area is renowned for its elephant population- around 60,000 live here – and we saw a few of them today! The forests have been decimated by the elephants, and we were amazed to see mile after mile of broken, damaged or dead trees. We were so close to one elephant at the roadside at one point, Ian said that’s about as close as he’d ever want to be to one! 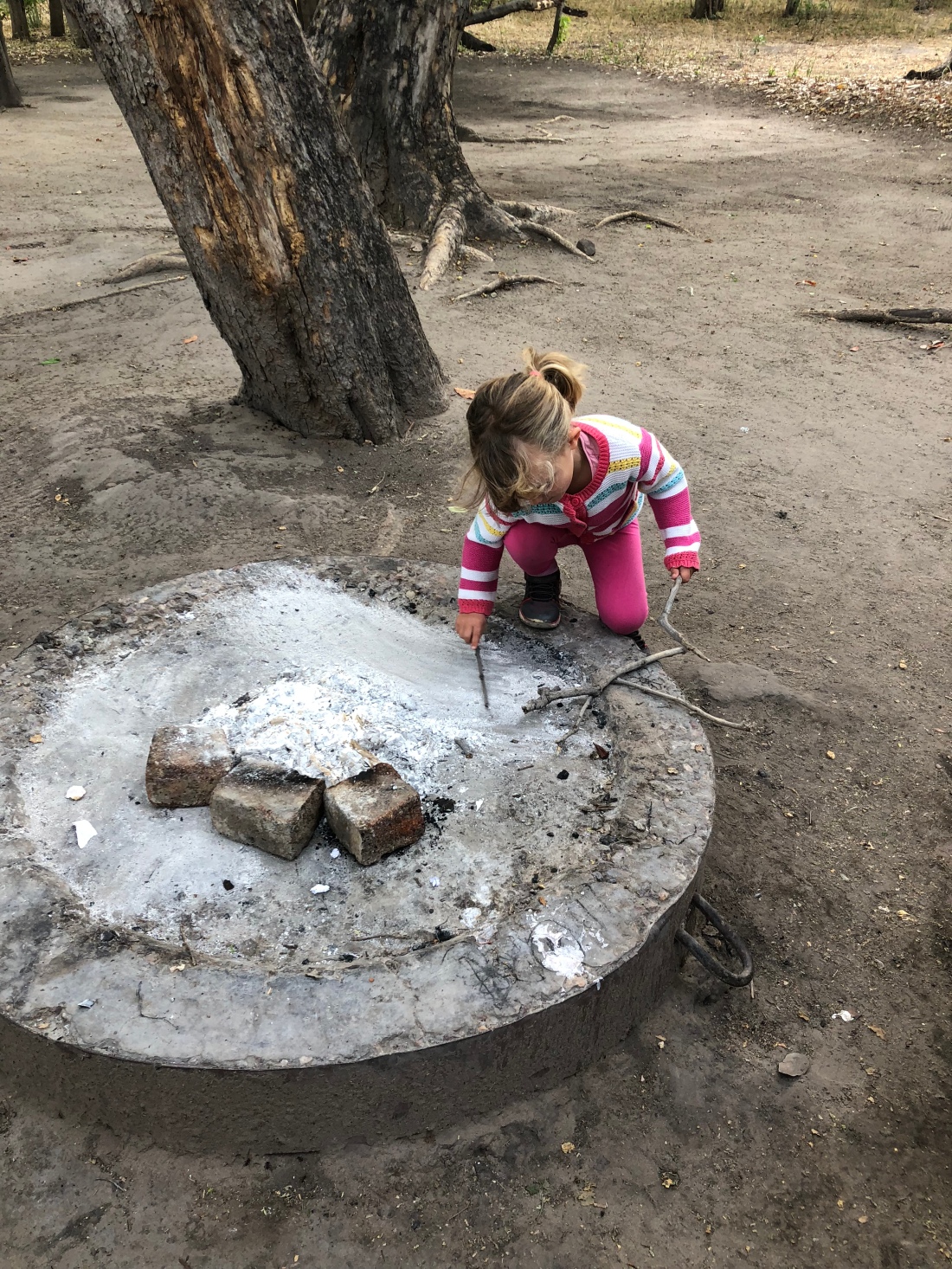 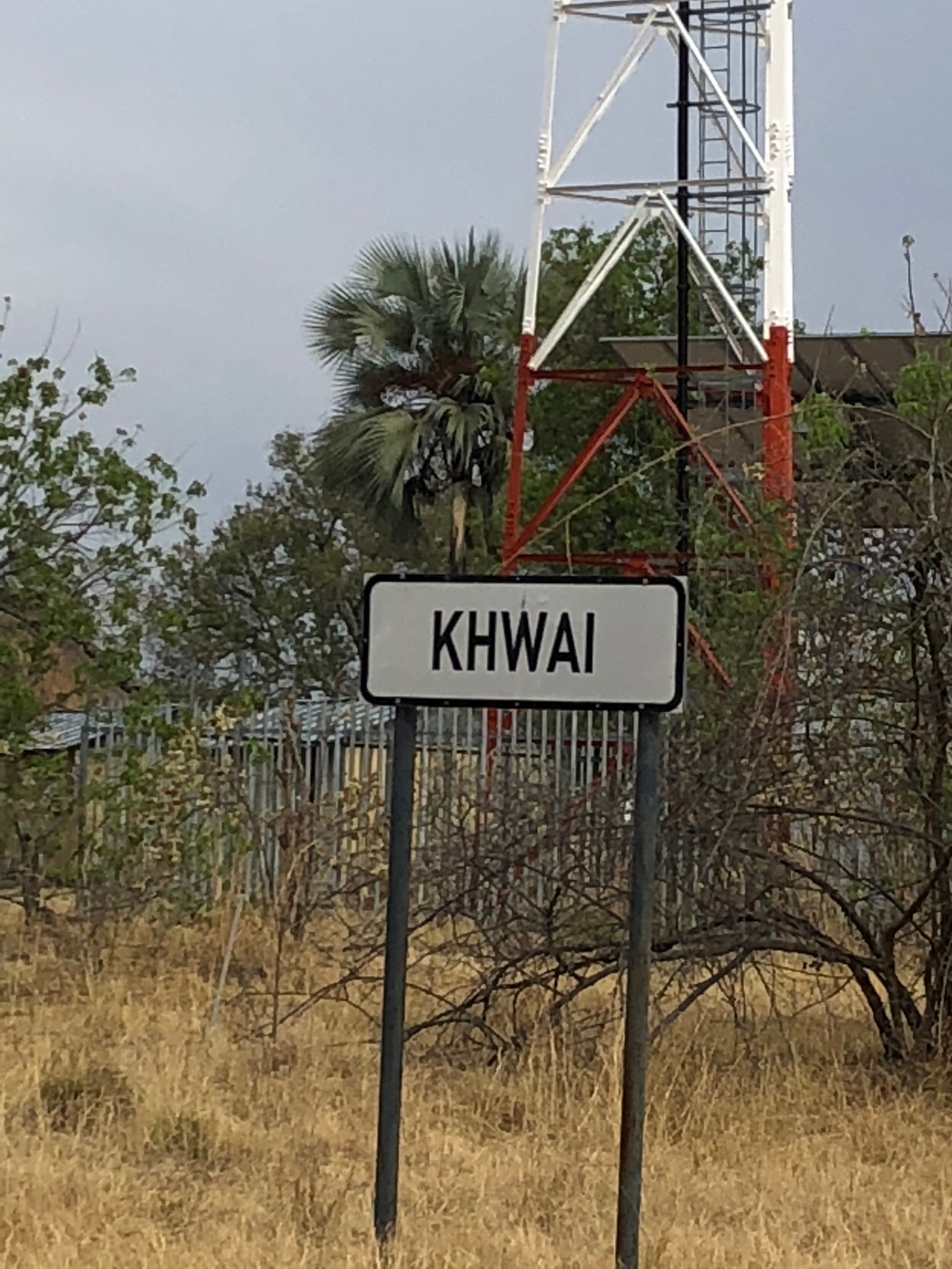 A wrong turn took us down a terrible yet terrific rarely-used back road to the entrance gate of Chobe, and then a repetitive sandy bumpy road led us to Savuti Campsite, where we were warned not to let Cornelia out of our sight for a moment, due to lions and other predators regularly visiting the unfenced site. We only need to be given those kind of warnings once, and explained it to Bugsy without trying to terrify her. Of course, she was completely unbothered, just trusting that neither of us would let her be carried off! 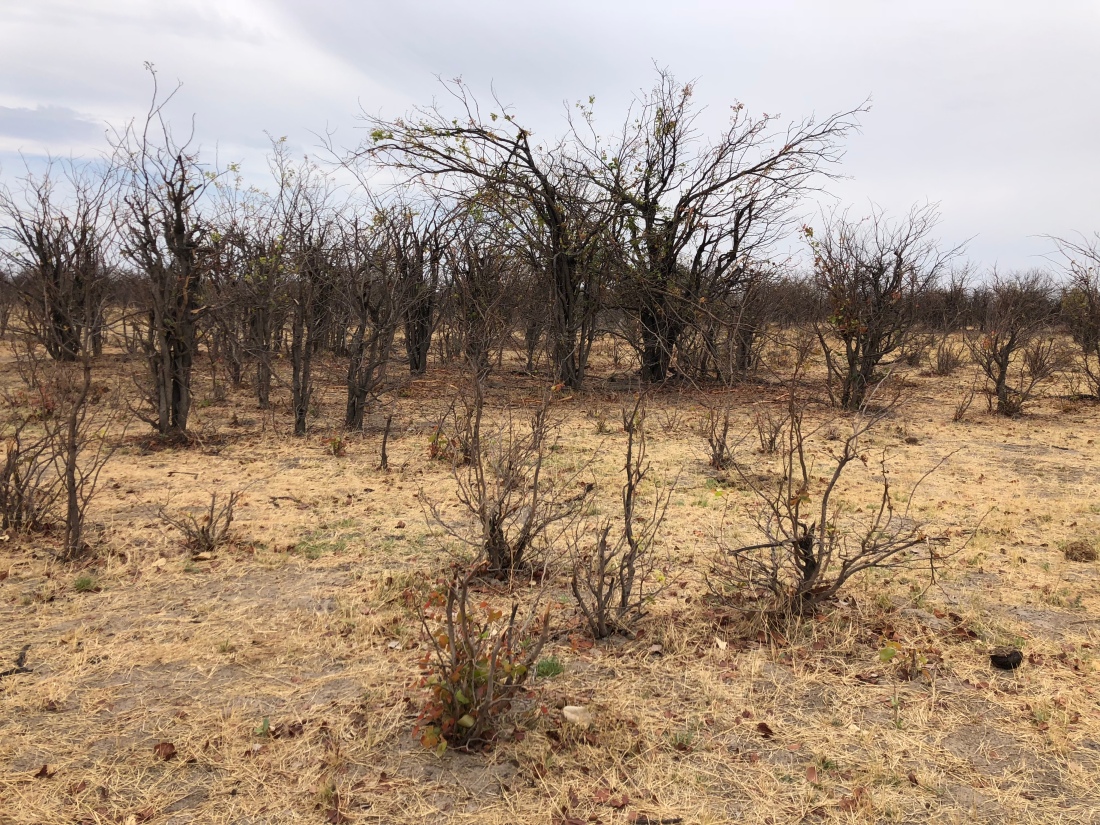 On arrival at our lovely large pitch, I made a quick lunch while Cornelia took out the small trowel and started digging up the sand. We ate in the company of various hornbills and mongoose who were watching carefully for a crumb to be dropped, and like those naughty monkeys we’d encountered this morning, just shoo-ing them away wasn’t terribly effective. Initially Cornelia was a bit scared of them (she cried when one squawked in her face) but she recovered quickly and told the hornbills that they could go and play in her activity centre that she’d built for them. (This was the sand she’d been digging before lunch.) 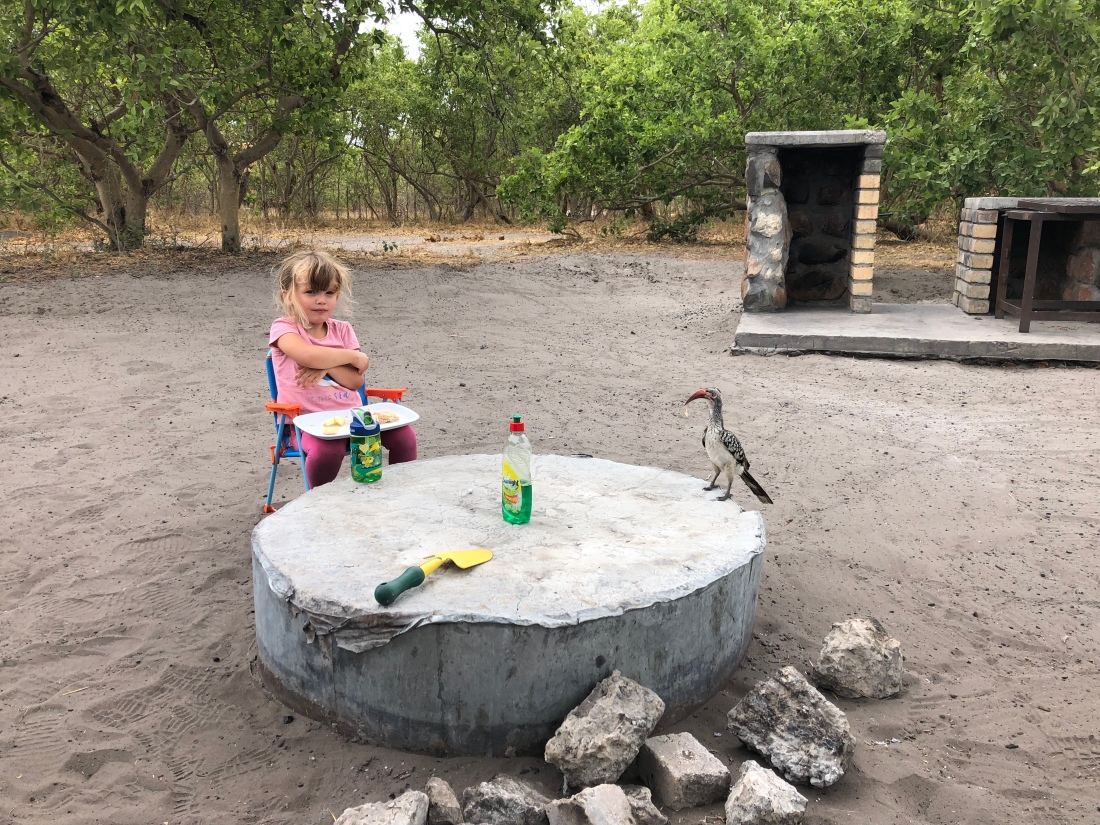 With lunch finished, we decided to go for an short afternoon game drive, aiming for a Baobab area. Our sat nav and my map reading did not match up and we ended up going down a very narrow untravelled track, which did eventually lead us to more or less the right place. There was an option to go up Quarry Hill, described in our Chobe guide book as “a bit hairy”. We (obviously) had a go, but the track was so rocky that we didn’t fancy risking a flat tyre, so turned back. We saw some more giraffes, elephants, zebras and wildebeest, and lots of elephant skeletons, but still no lion, leopard or cheetah. 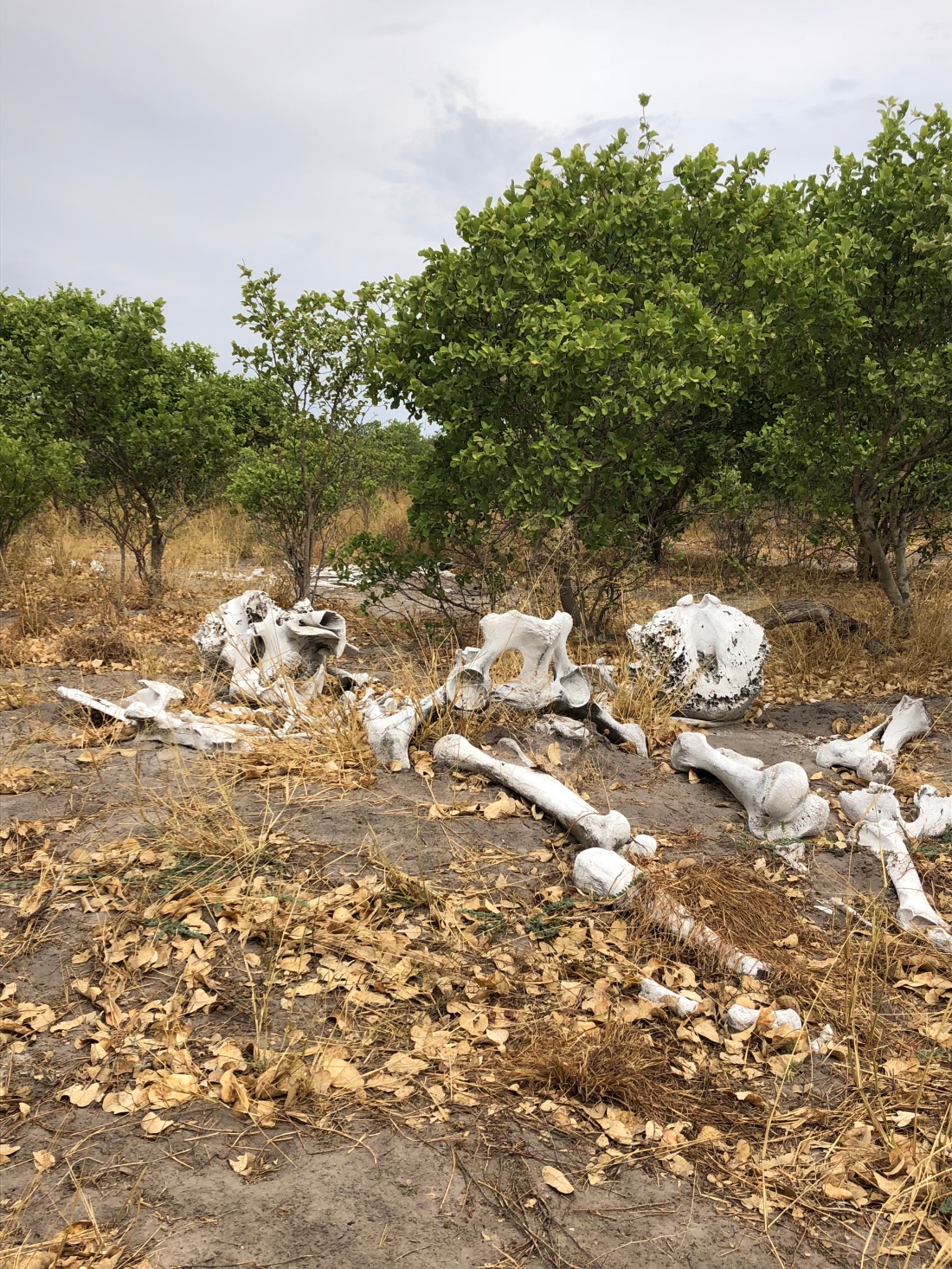 On our return to the campsite, we bought some water from the Tuck Shop and ordered some firewood, and as I made us a cup of tea, Cornelia got filthier than ever, digging the grey charcoaly sand with her hands, and pretending she was at the beach. As is my motto to Bugsy, “Everything’s washable, everything’s dryable”, she needed a jolly good wash, so I took her off to the elephant-proof ablution block and scrubbed her clean in the room temperature water. The water here is solar-heated, but as we haven’t had any sun for the last few days, it was no surprise to find there was no hot water. 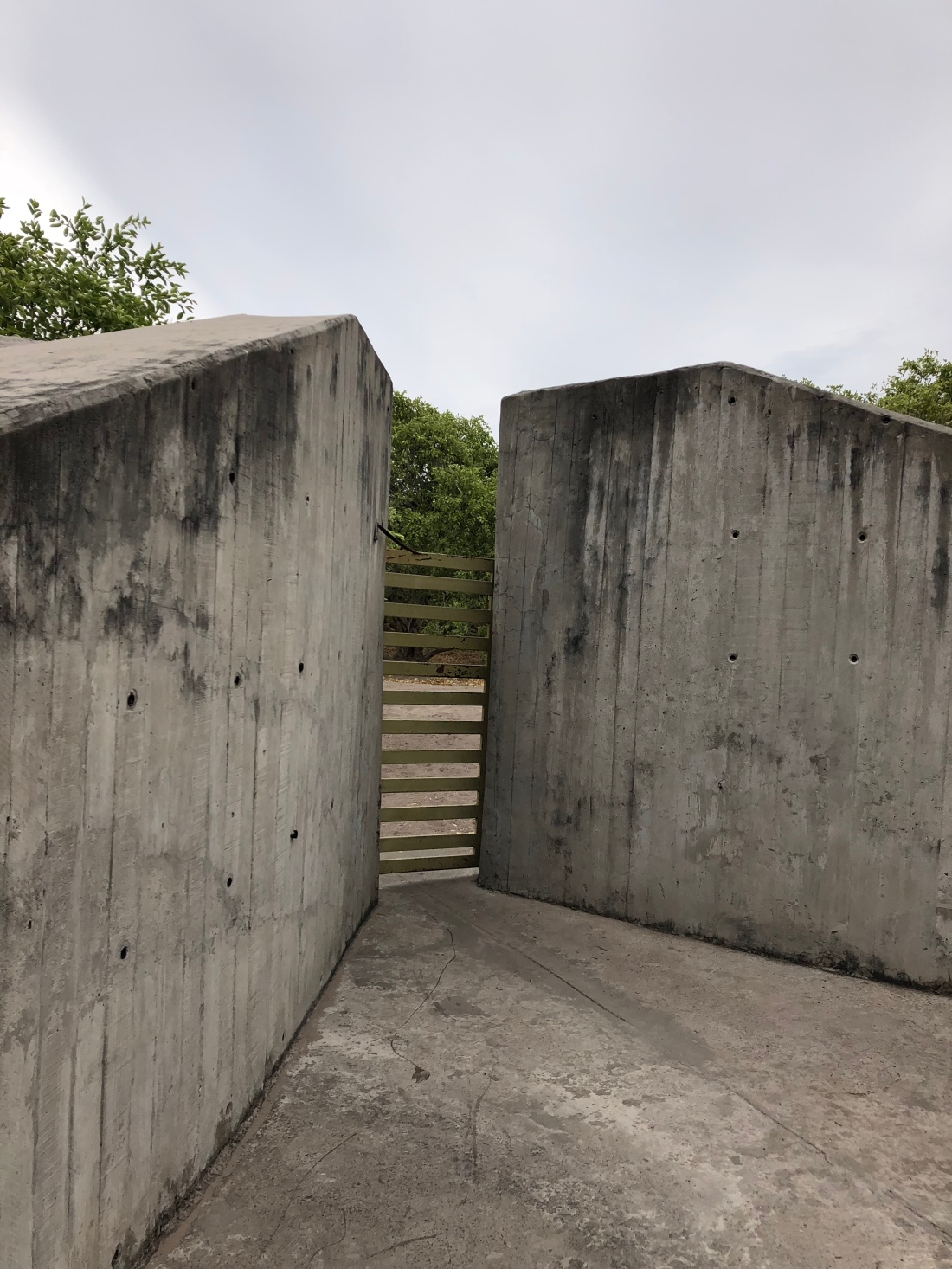 Toddler polished and gleaming, and with the promise of not getting dirty again tonight, I carried her back through the sand to our pitch and set her down carefully. She was very good, settling for a game of Connect4 with Daddy while I cooked supper. Tonight, Ian and I had sausages, beans, potatoes and a fried egg, and Bugsy had the leftover pasta bolognese and a side of beans, and we ate by the camp fire, listening out for animals. Luckily, all we could really hear was the evening tweeting of the birds.

We decided to leave the washing up until the morning, so packed it all into a bin liner and shoved it in the front cab, along with our dustbin, which is now really smelly. All the campsites ask you to take your rubbish with you, so it has been building up over the last few days.

Once Bugsy was in bed, Ian and I watched the fire together for a bit before also heading off for an early night. We have a five hour drive ahead of us tomorrow, with a boat trip booked for 15:00, so we really need to make an early start!

One thought on “Monkey thieves”