Apart from Bugsy waking at 04:00 and asking me to get into her bed with her, we all slept very well. The storm had continued for a long time last night, and there were still occasional rumbles of thunder in the morning, but at least the rain had stopped. We had breakfast in our room and packed up the van ready to check out at 10:30, as the room literature had advised us. However, we did receive a call at 10:02 asking us when we would be checking out. Apparently it is actually the standard 10:00, but they didn’t mind in the slightest that we would be another half hour. Especially when I mentioned that their room information is wrong…! 😉

Ian was up for driving today for the first time in days. But within minutes, he had pulled over demanding I drive, because I’d asked him to calm down after he’d lost his temper with a driver who’d cut him up, when Ian was in the wrong lane going around a roundabout. Cornelia proceeded to wind him up, saying “Just ignore him, Mummy!” and “He’s just having a five minute strop, Mummy.” Anyway, he recovered within Cornelia’s estimated five minutes, and we went off to the Spar to get some meat for the next few days. Ian stayed in the van with Bugsy and when I’d finished the shopping, he was preparing the travel potty for an urgent poo (Cornelia not him…). I left them to it, and went to withdraw some cash. The first block of ATMs wasn’t working, so I strolled around a bit, finding another supermarket and another ATM, which was working this time. Because time was ticking by, we agreed that Ian should drop me off at the Police Station so I could pay my fine, and then buy the Chobe and Moremi maps from the Parks Office, while he went to fill up with diesel.

The police station was disorganised, to say the least. There was no one at the front desk in the entrance hall, so I went into the Community Services Hall, where five officers sat chatting, seemingly ignoring the other people waiting for some attention. After a couple of minutes, I went back into the front hall, where a police officer was now manning the desk (table!). I asked her where I needed to go, and she helpfully led me down a dark corridor to the Crime and Traffic Registry. She went inside for a moment, and on her return, told me that I would be seen next, and to go in when the man comes out. I waited patiently, for about ten minutes, when Ian and Cornelia surprised me with a visit… I still had the credit card that he needed to pay for fuel! Whoops. Shortly after they left, the man came out. I wasn’t sure if I should wait to be invited in, or just walk on in, but (encouraged by the group of people queuing for a different office), I knocked and walked in. The unsmiling police officer told me to go back out, and to wait as she was still helping someone. I dutifully left the room, and returned to the queue, who all apologised for sending me in, by error. Another five minutes passed, when a second man left and I was waved in. It took all of five minutes to pay the fine, and I was on my way feeling slightly bemused by the whole experience. 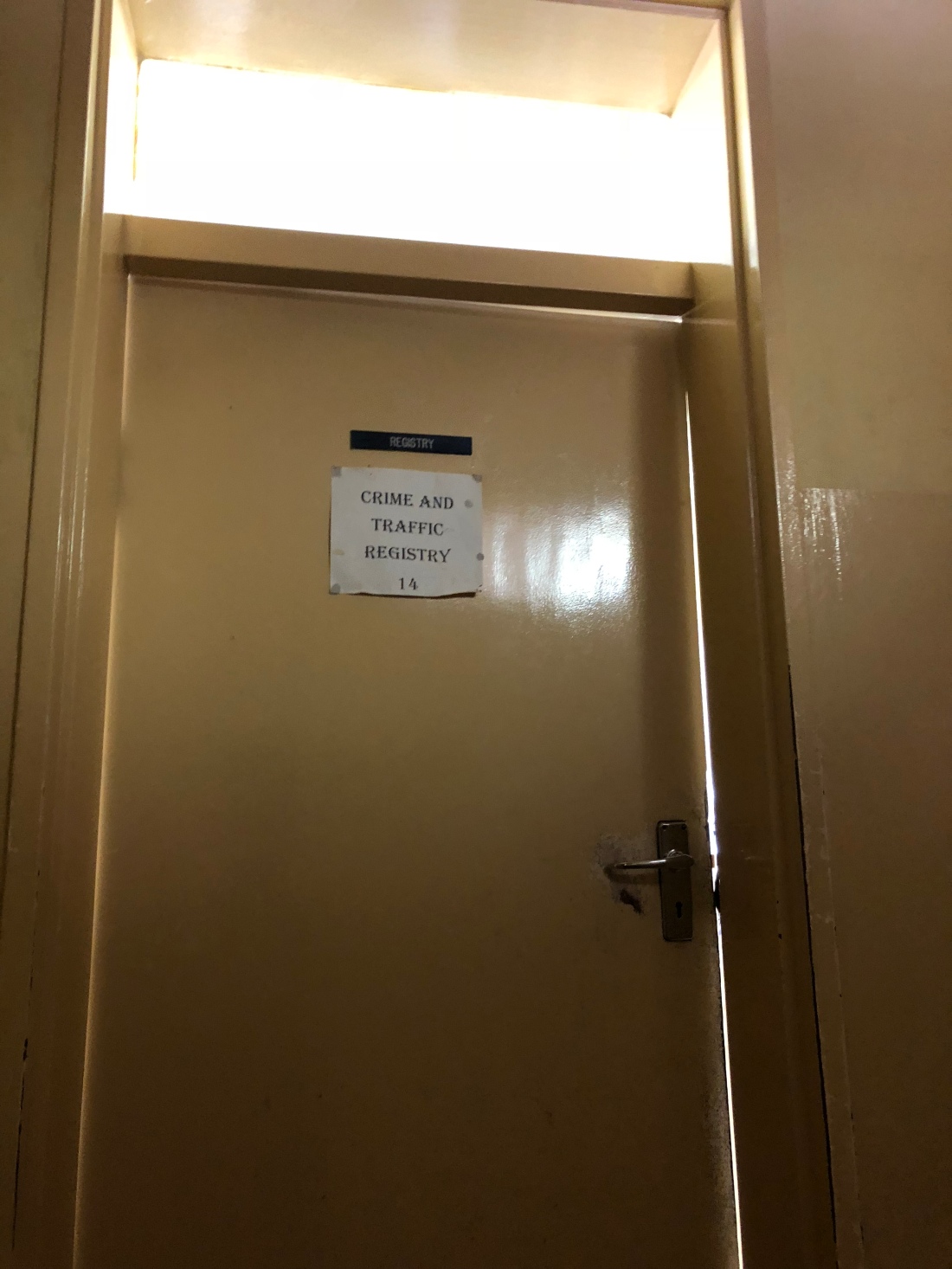 I wandered back to the National Parks office and bought our Moremi and Chobe maps, and went back to the main road, where I was collected by Ian and Cornelia ten minutes later.

By the time we had returned to the supermarket to get some water, it was 13:00, and we were torn between trying to find something in Maun for lunch, or just cracking on to Moremi. We decided that we would leave Maun and stop at one of the lodges or hotels along the route. We saw another Cresta Hotel signposted just off the main road, and pulled in to the smart hotel.

We were seated quickly, and we ordered quickly, and we sat, waiting patiently (at first) for our food to arrive. After half an hour had passed, I asked a waiter how long it would take to make and deliver two sandwiches and a salad. He said he would check, and a few minutes later, our lunch arrived. My salad looked great, but Ian and Cornelia’s sandwiches were very disappointing. Ian’s beef was chewy and, despite ordering brown bread, it had been served on white. Cornelia’s was the worst of all. Her bread was stale. Despite clearly asking for ham and cheese on white bread, with no salad or dressing, she had a dry ham sandwich with an onion relish smeared all over it. I emptied the sandwich of unwanted salad and did my best to scrape off the relish, then asked our waiter for some cheese, which he brought, but the damage was done and Cornelia only just managed half of it. If we hadn’t been in a hurry (we didn’t want to get to our campsite in the dark, given the wild animals prowling around the unfenced area), I would’ve complained fiercely, but we didn’t mention it again and just moved on!

Ian was now driving again, and although he admitted to being tempted to drive faster than the permitted 60, we had definitely learned our lesson from yesterday! Shortly after Maun, we left the tarmac road and started the trek along a undulated compressed sandy stretch (full of large puddles from yesterday’s epic and unexpected rainfall) which took us all the way to the Moremi Game Reserve South Gate entrance.

Once I’d signed us in at the office, the road surface changed almost immediately, becoming very bumpy with constant deep deep puddles, requiring alternating often between normal 4wheel drive and the low ratio. Our speed slowed to an average of about 20kms to go, and all credit to Ian, he did extremely well navigating the difficult road surface. We quickly caught up with two vehicles and we followed each other most of the way to Third Bridge, our campsite for the night, overtaking then only when they stopped for longer than us to watch the pack of African wild dogs. It took us two hours to travel 46kms, including a “whatever you do, don’t get out of the car” out of the car wee stop for Ian! 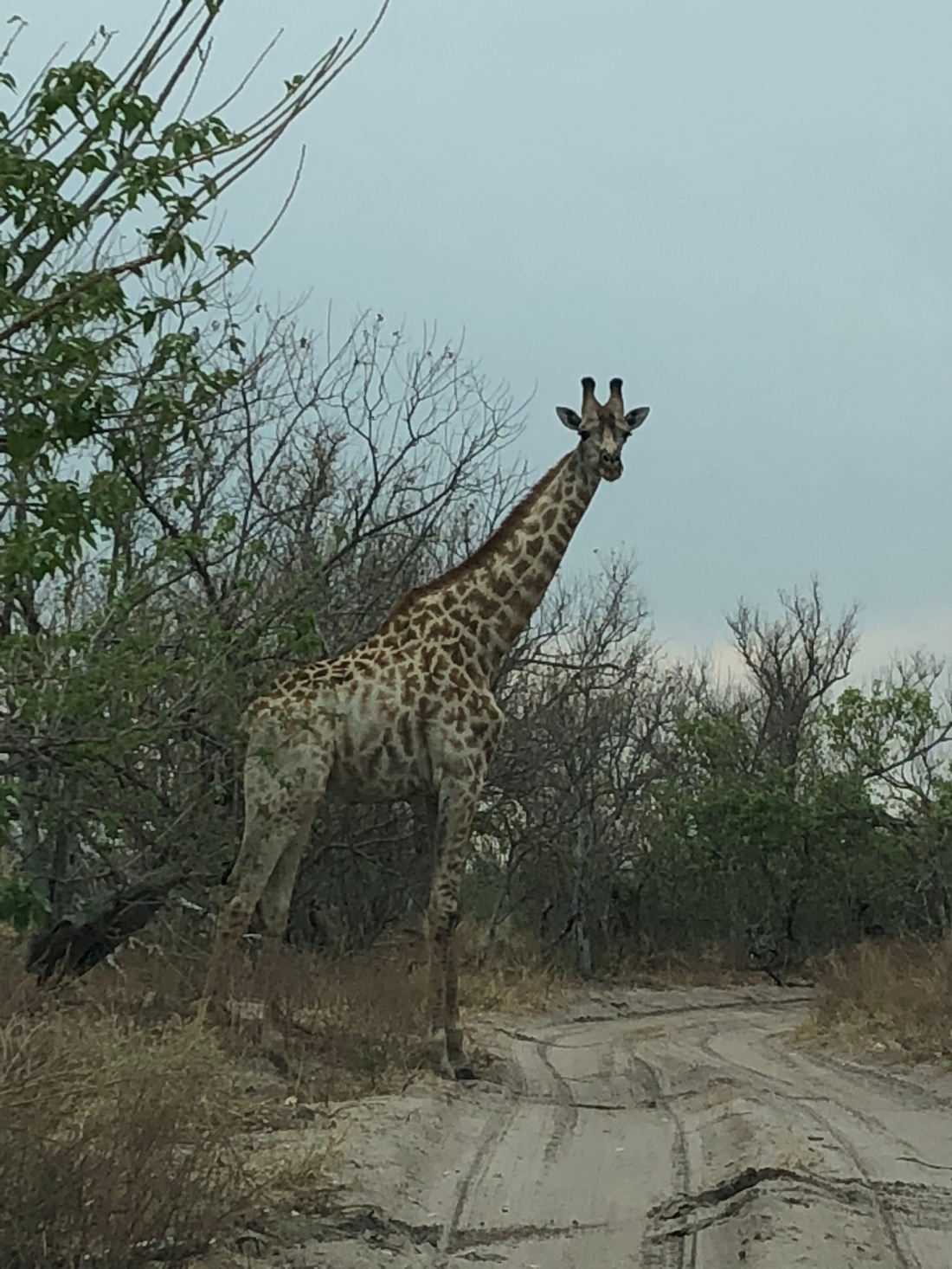 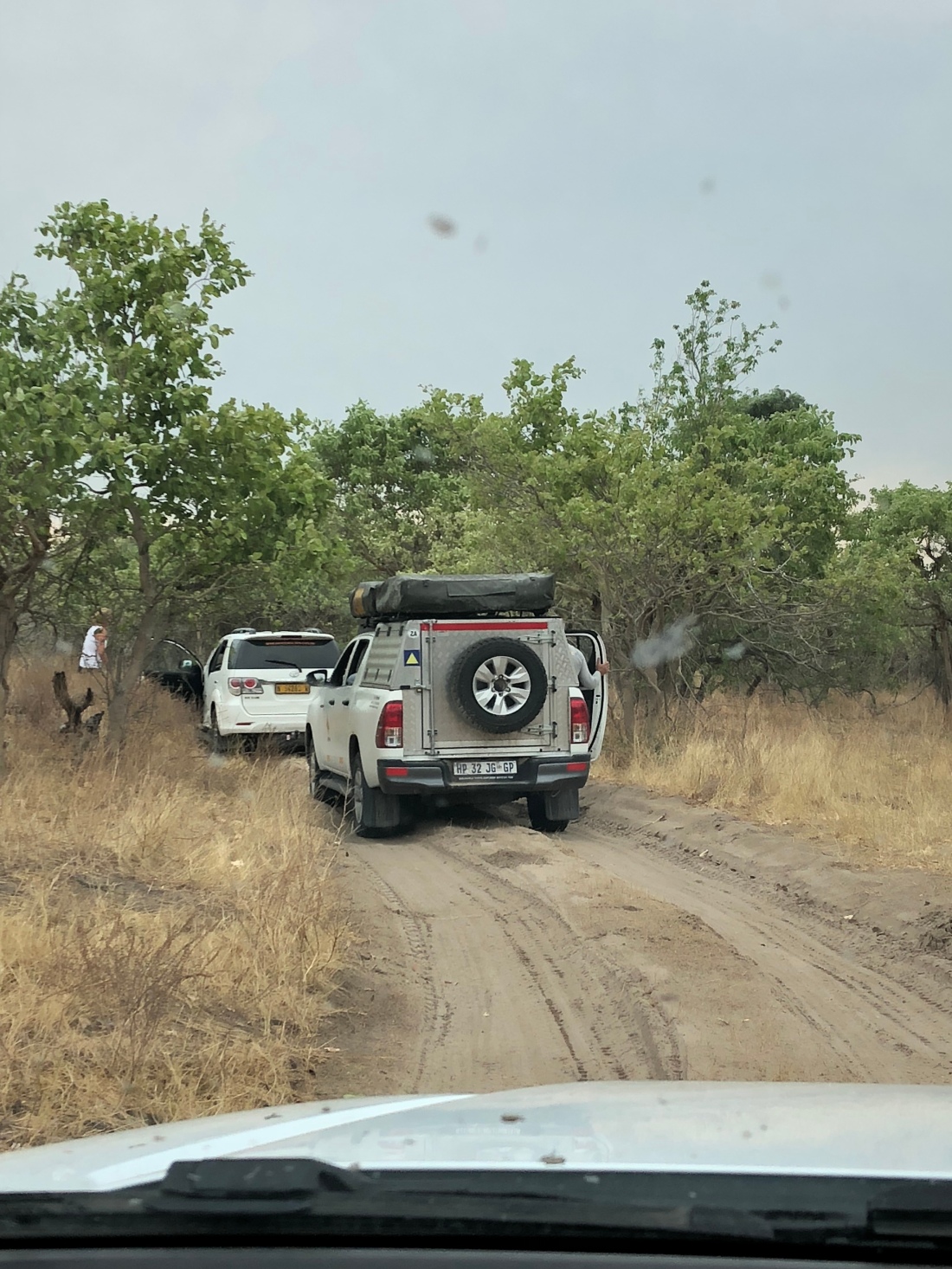 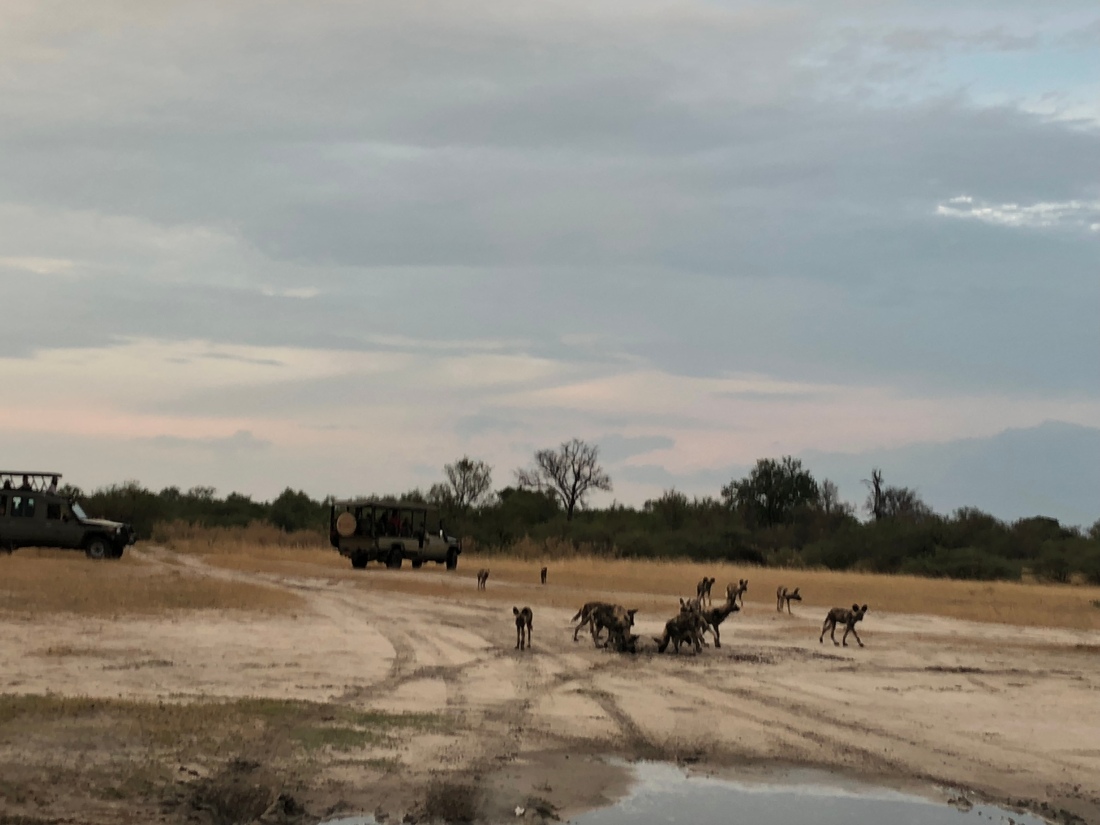 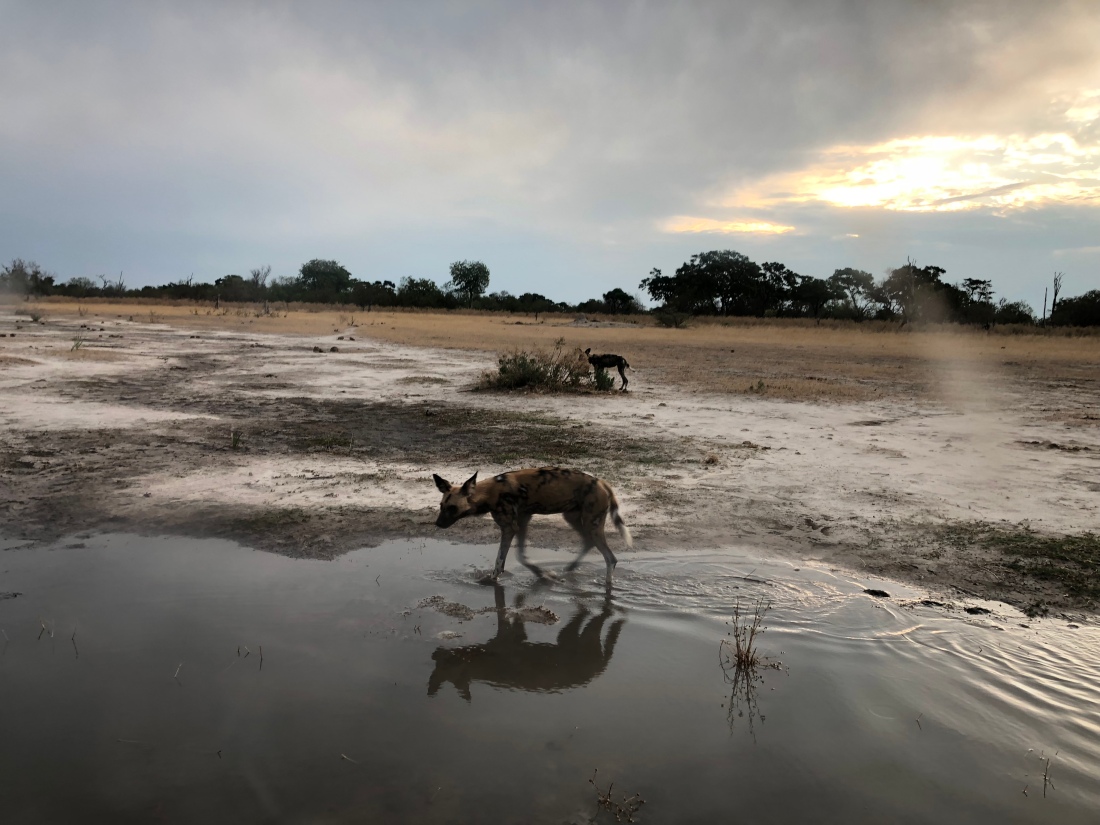 We arrived just as the sun was setting, and drove to our allocated safari tent “Eagle”. We brought in our luggage and I set to work cooking a bolognese in the dark. Much to my horror, the sugar pot had emptied during our very bumpy ride, covering the interior of my kitchen and stove. Gah!!! I spooned up as much as I could, and had to leave the rest until tomorrow, as I didn’t want ants crawling all over everything. And it was dark. And there were baboons about. And lions. Etc.

Ian also had a horrible find. A 5 litre bottle of water had lost its lid during the bumpy ride, and water had soaked the rear of the van, where Cornelia sleeps and where all of our luggage is stored. Another gah!! Thankfully, in respect of luggage, only my suitcase was wet and fortunately, the bottom layer was mainly sports lit and shoes. Our packs of clothes had mostly escaped a drenching.

We sat inside our safari tent- it is strongly advised that small children do not venture outside alone as hyenas, jackals and lions see them as prey – and ate our tea, and had a nice cold beer. Cornelia was very good at going to bed tonight too. She brushed her teeth nicely and lay down on her mattress on the floor, ready for her stories. With the promise that I would give her another cuddle when I went to bed, she settled down quietly. Ian and I shut ourselves in the bathroom and polished off some chocolate, and read our books, listening to the occasional lion roar (!!!) until bedtime. 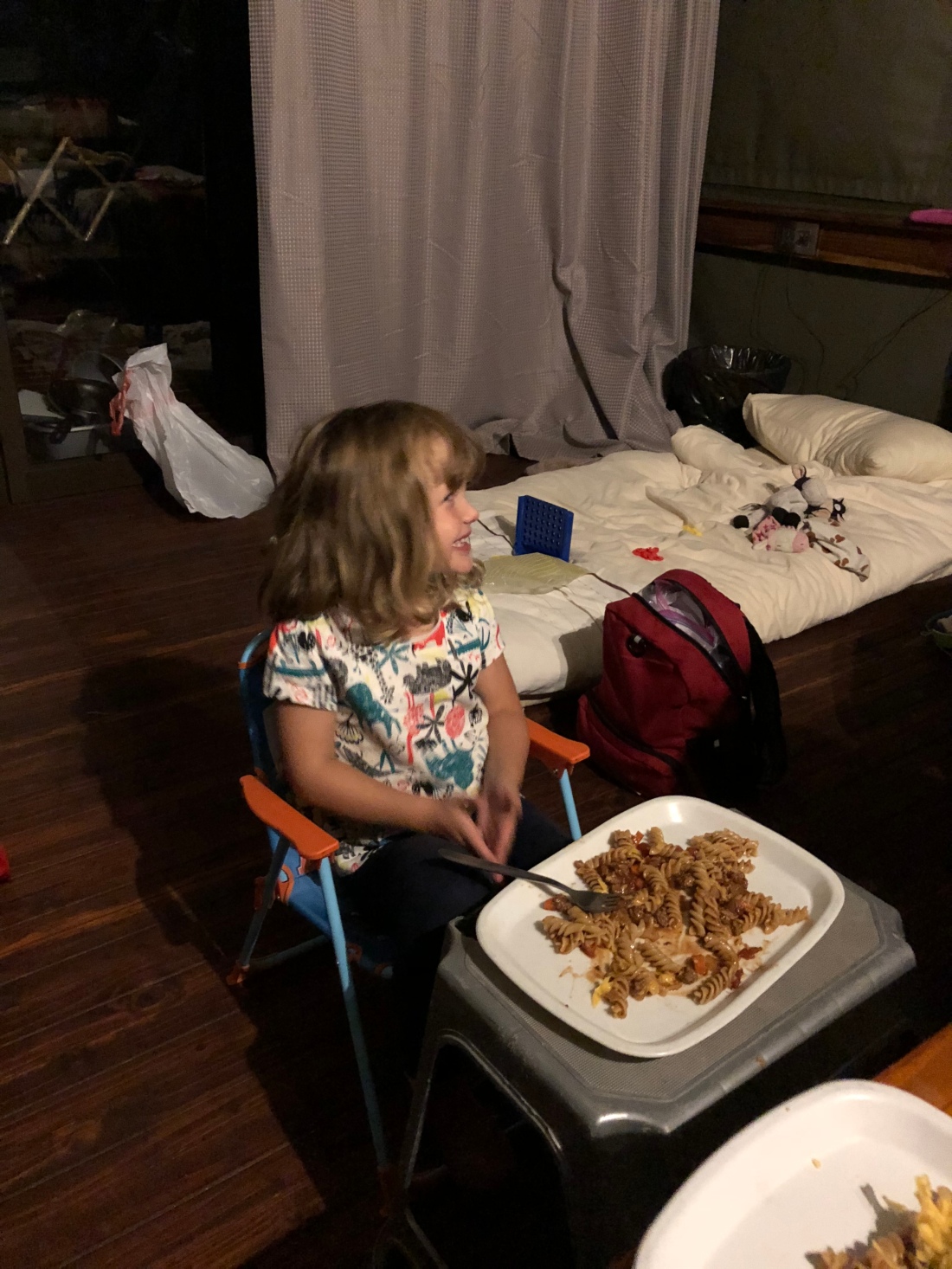