We were very sad to leave the comfort and space of The Family Hideout, but we always feel like that when we move on! Luckily the excitement of the new is there!! We trundled down the track to Tok Tokkies, a guided walks business, where Steven had suggested we inflate our tyres. Unfortunately they didn’t have a spare “o” ring, so we compromised on the tyre pressure and set off down the bumpy track, with an ostrich running along side us for a while, much to our great amusement! 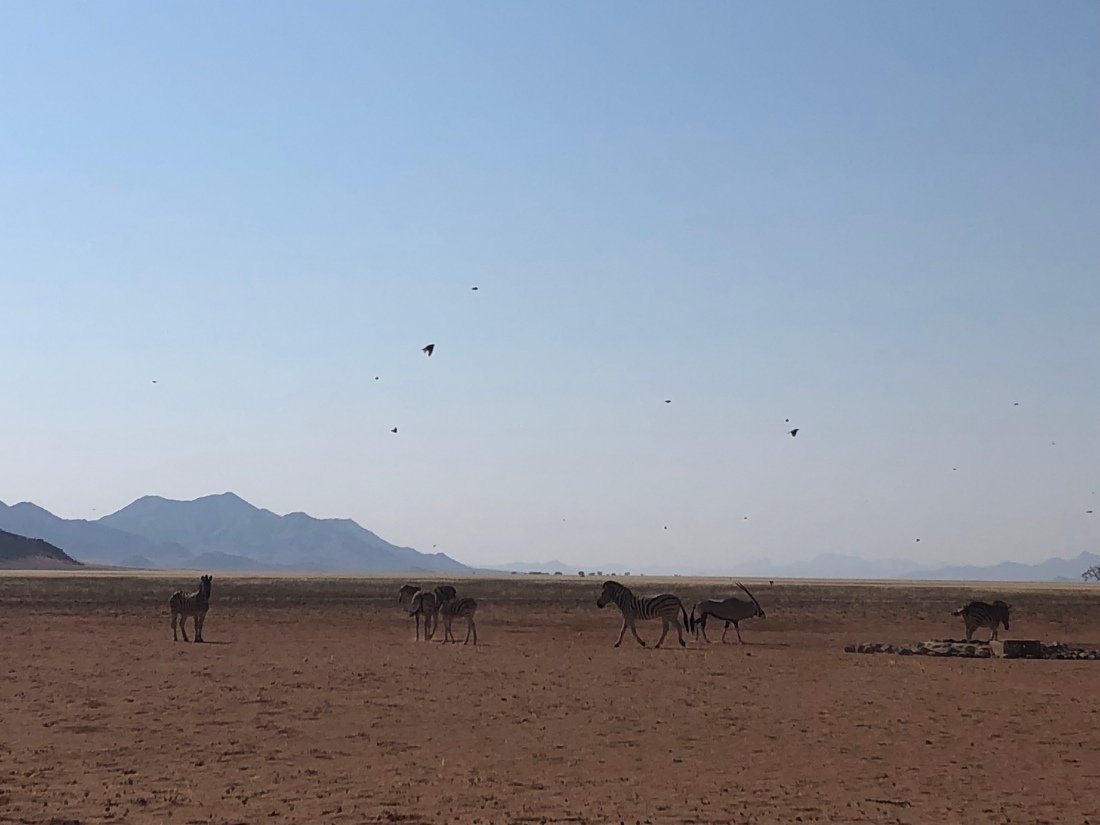 We arrived at Sesriem campsite in the Namib Desert just in time for lunch and checked in. We were horrified initially at how big it was and how many people there were! A few days of isolation and we had become quite accustomed to it! We found a table in the crowded restaurant and I shared Cornelia’s bratwurst and chips (she ate the bratwurst, I ate the chips…), and Ian had a toastie. There was WiFi there, so I bought a small amount and watched as the emails and messages poured in! I ran out of data pretty quickly, but it was enough to let people know we were okay! 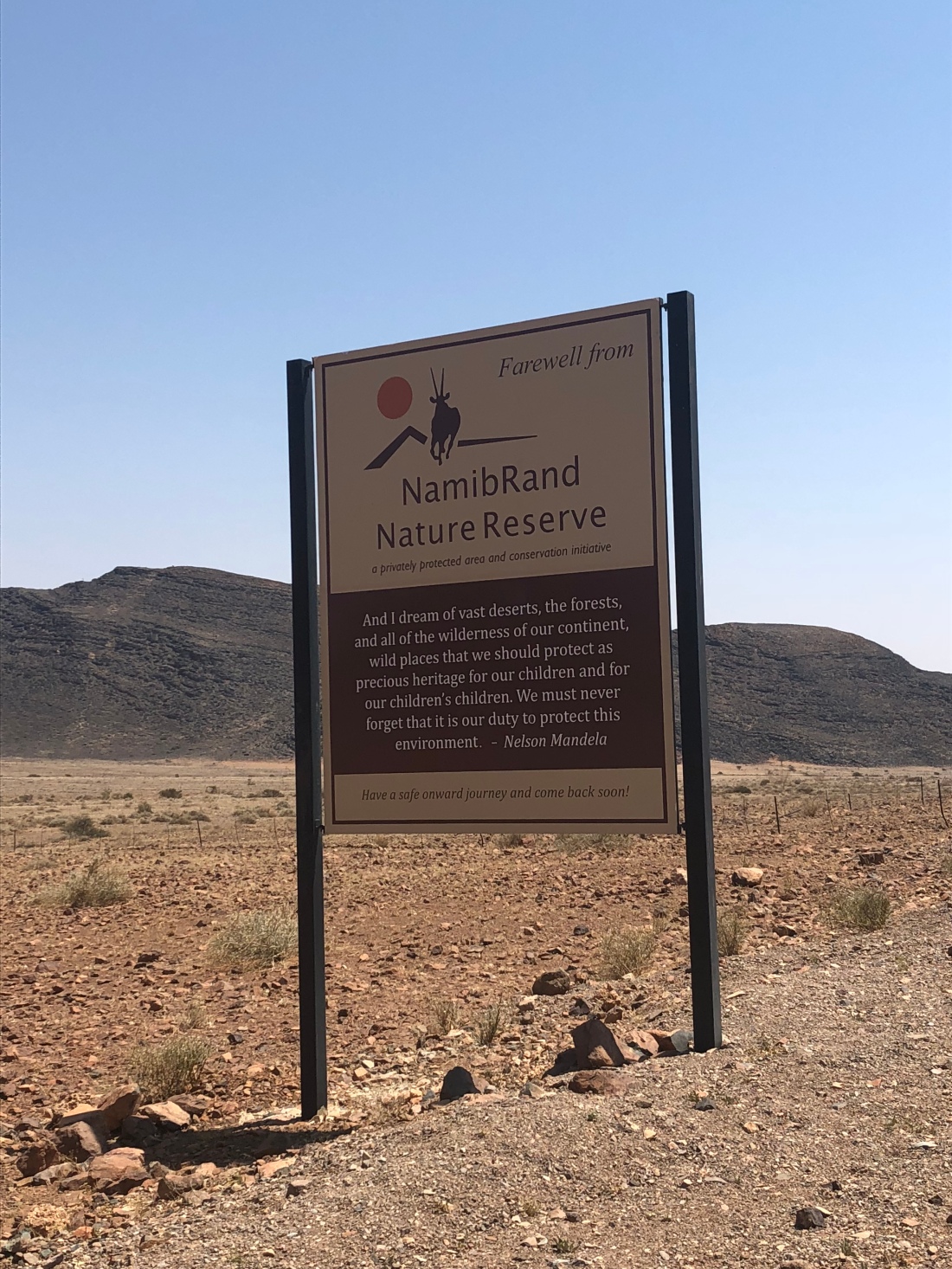 After lunch, we set off for our pitch #15, and were very happy to find it in the shade of a huge tree, with one of the mega bird nests built into it.

Cornelia and I danced our way to the swimming pool, followed shortly by Ian carrying a second towel. I had hoped he’d stay back at the van and have some “Ian time” that he clearly needed, but he insisted he wanted to sit and watch me and Cornelia in the pool.

There was another giant birds’ nest in the tree by the pool and I could see one of the birds was stuck upside down, his foot caught by some of the woven grasses. He dangled there, and none of the other birds seemed to notice, bless him. 😩

When we had checked in earlier, I had spotted another couple with a young boy, and had said “Hi!” in passing. When we were at the pool, the same family appeared, and we got talking to them. Suzanne and Manuel are doing a month self-drive with Elia, and live near Bern. They are encountering the same challenges as we are with a small child who is not in awe of the scenic driving or impressed by the unusual wildlife, so we had plenty in common! They had been very keen to do a hot air balloon excursion but Elia was not allowed to go as he was too small. There was the option of having him transferred from the start site to the finish site of the balloon trip, but they worried that, as he doesn’t speak English and none of the guides speak German, this would be horrific for him. We wondered if we all went together, this would be less traumatic for him, and when we suggested it to the kids, they LOVED the idea of being in an adventure together with no parents! It would only be for an hour, and we would all have breakfast together at the drop point. Sounded perfect, so we went back to our respective tents, changed, and met up again in reception ready to book. We had filled in the forms before we read at the bottom that it would cost nearly £400 per person!!! I said, as casually as I could, “Gosh, this is much more expensive than I thought!” Suzanne and Manuel agreed – they had thought the price was per couple, and it blew their budget too. We ummed and ah-ed but, with heavy hearts, we decided to cancel that idea, instead agreeing to meet at 05:30 for a trip to climb Dune 45, the “big one”, for sunrise. 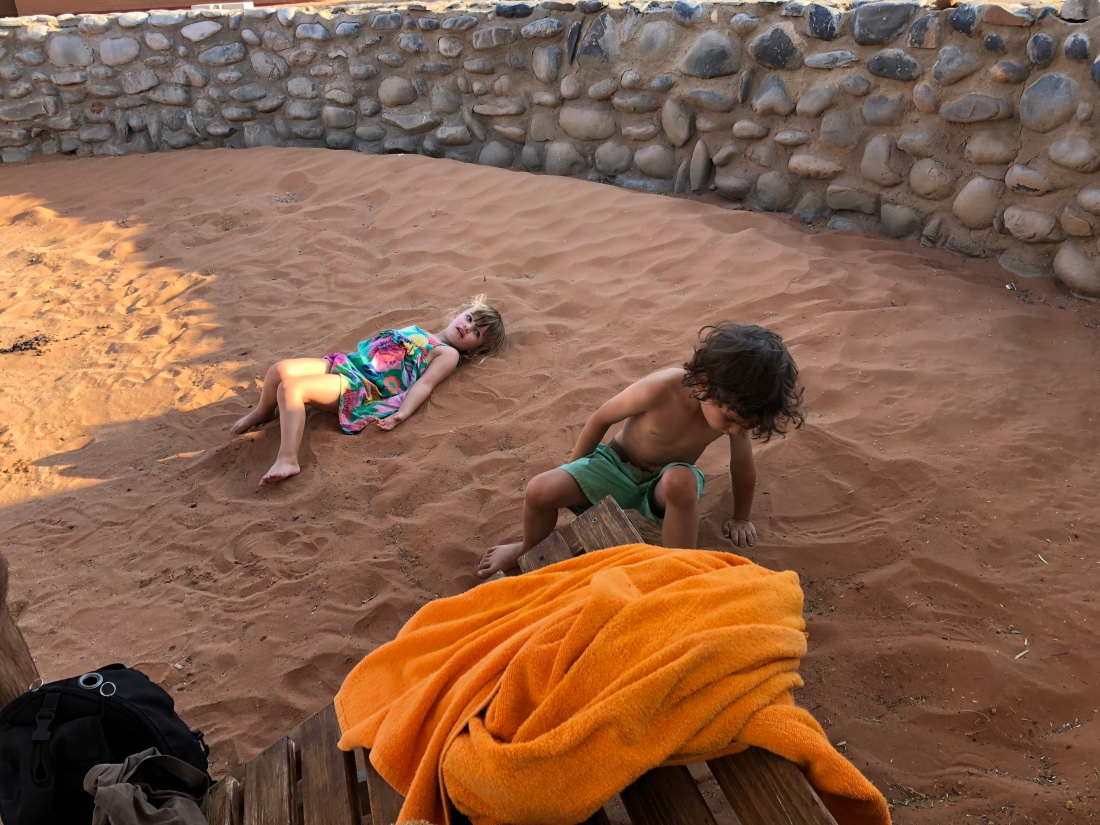 We all had dinner together in the campsite restaurant, and the kids had the best time painting faces onto paper plates that I’d bought in Cape Town, and chasing each other round and round. We were the only people in the restaurant now, which worked brilliantly, as we didn’t have to try and stop them from having too much fun! I had bought some paper plates in Cape Town, and Cornelia had been given some paint sticks by Auntie Karen (like glue sticks, but paint – brilliant for travel!), so I gave the kids the packet and they happily drew faces and pizzas, until dinner arrived. Mine was a sadly overlooked chicken breast and Ian’s an undercooked steak, but the new found company and double beers more than made up for it! We could’ve easily stayed taking to them for hours more, but the kids started getting a bit stroppy and were obviously tired, so with a plan to meet for the dune walk tomorrow, we headed off to our respective tents for the night, ready for a VERY early start tomorrow!