With my alarm set for 05:00, naturally I woke up at 04:45, and listened to our fellow campers getting up, and watched the minutes tick by until Ian woke just before the alarm would’ve sounded. We dressed and while Ian packed our tent down, I managed to get Cornelia’s clothes on, and wrap her up in a blanket and onto my lap in the back seat, without any fuss. She sat snuggled up on me, resting her head on my chest as we drove through the dark to Dune 45 (otherwise known as Big Daddy) on the road to Sossusvlei.

I was expecting the car park to be jam-packed with trucks and vehicles, but it wasn’t nearly as busy as I had thought. With Bugsy in my arms, we set off on our trek up the enormous sand dune, following the footsteps of the people in front. Ian and I swapped over carrying Cornelia every few minutes, until Ian told me that he had a bit of a bad tummy, so I took over most of the carrying, until my heart was pounding so hard, I had to pass her back for a moment. I know how awful it is to need the loo and carry a child, so we swapped back again after a few minutes, and eventually we had reached the highest point of the dune that wasn’t already occupied! 23 minutes to walk uphill for nearly half a mile, my Garmin watch showed! 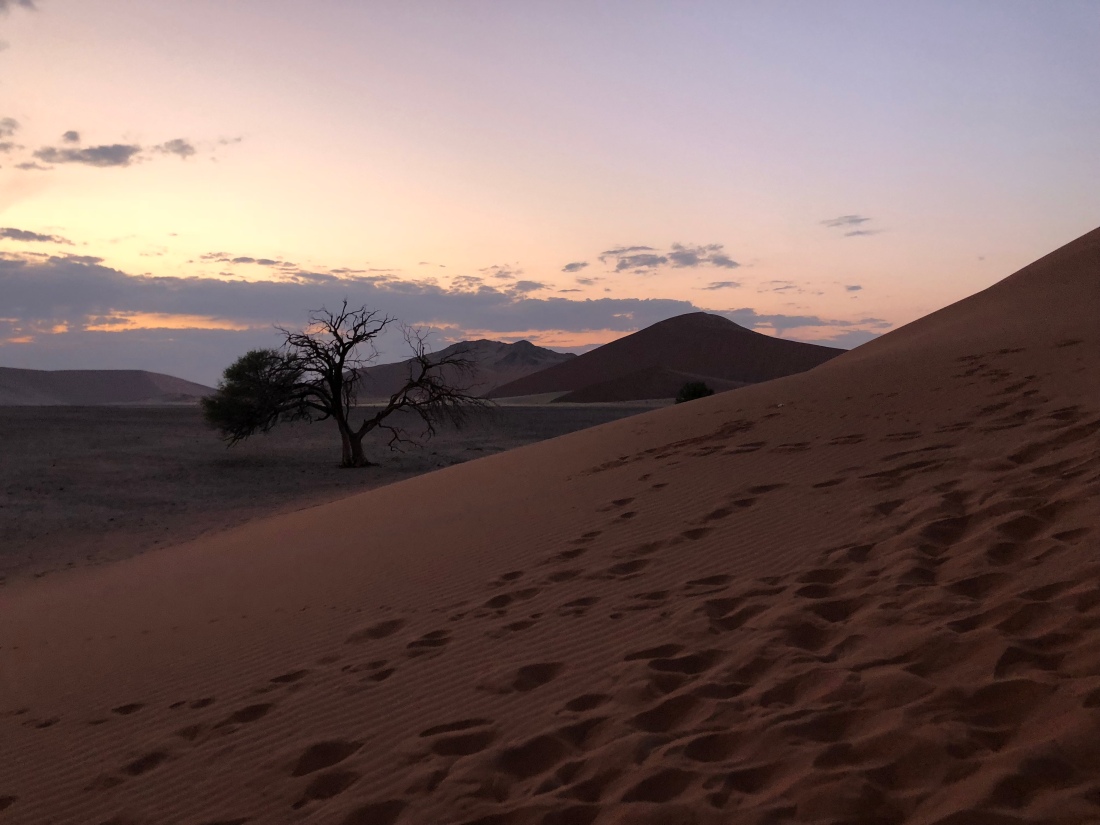 It was quite chilly on the ridge so I wrapped my jacket around Cornelia’s legs and we watched the sun rise through the clouds, giving off generous heavenly sun beams, eventually rising up through them to show off the glorious contrast of shadow and light on opposing sides of the massive dunes. I remember clearly being here nearly twenty years ago,feeling so sad and lonely knowing that I had left behind the person I then loved in the U.K. and wishing that I could share the moment with someone. And here, now, with Ian next to me and my darling little girl curled up on my legs with my arms wrapped around her. What a special moment for me. 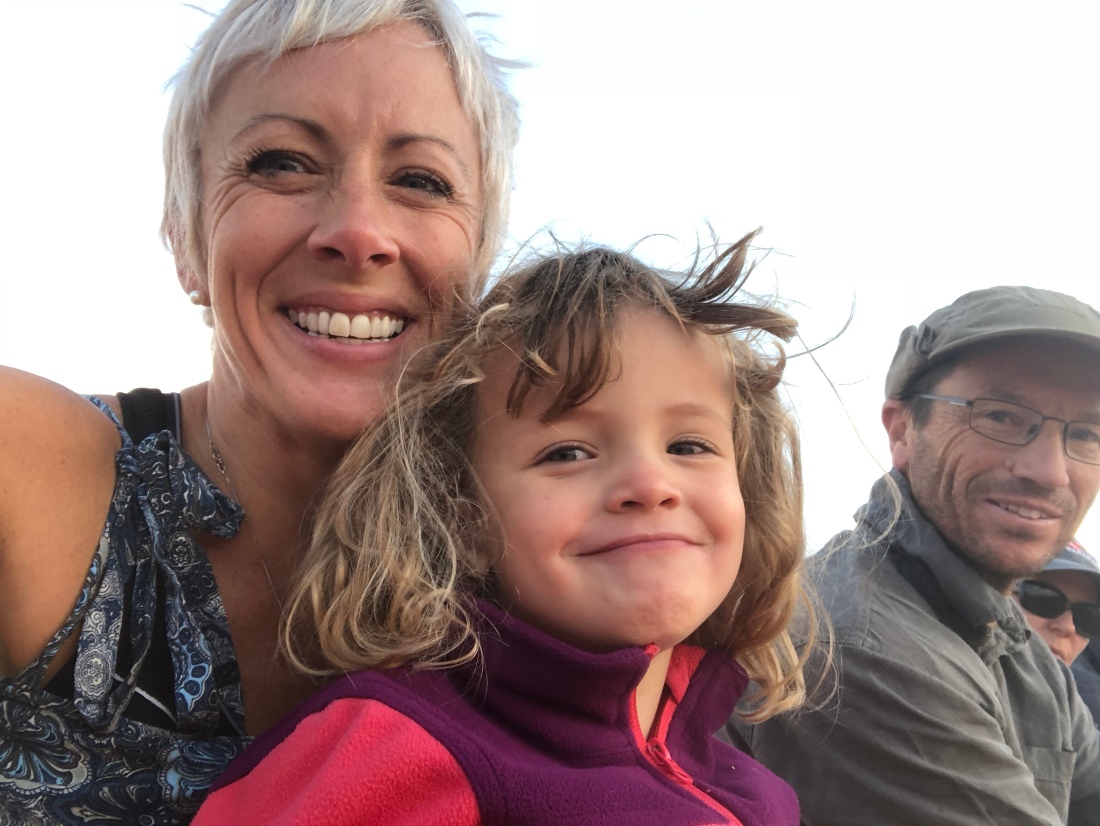 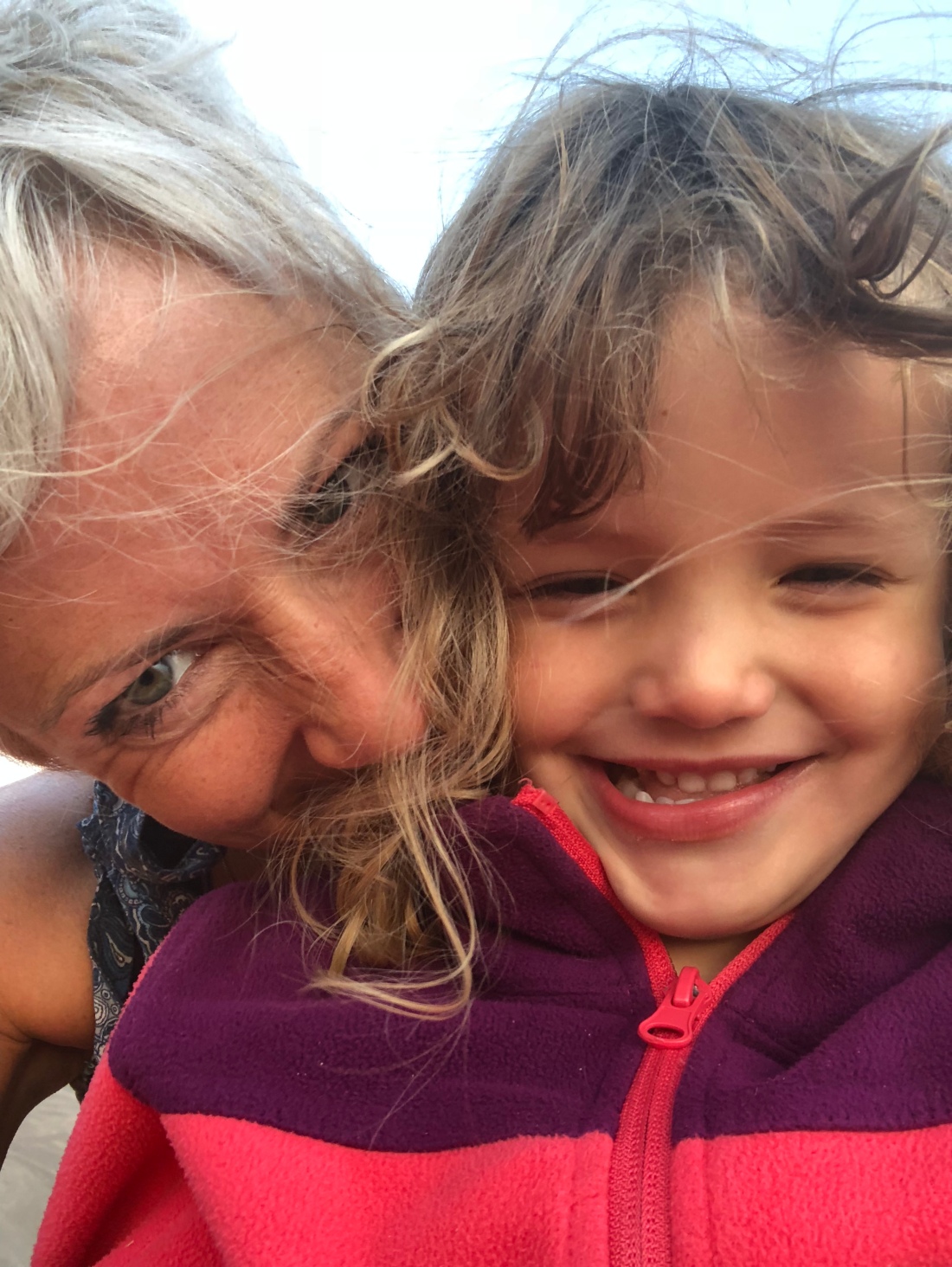 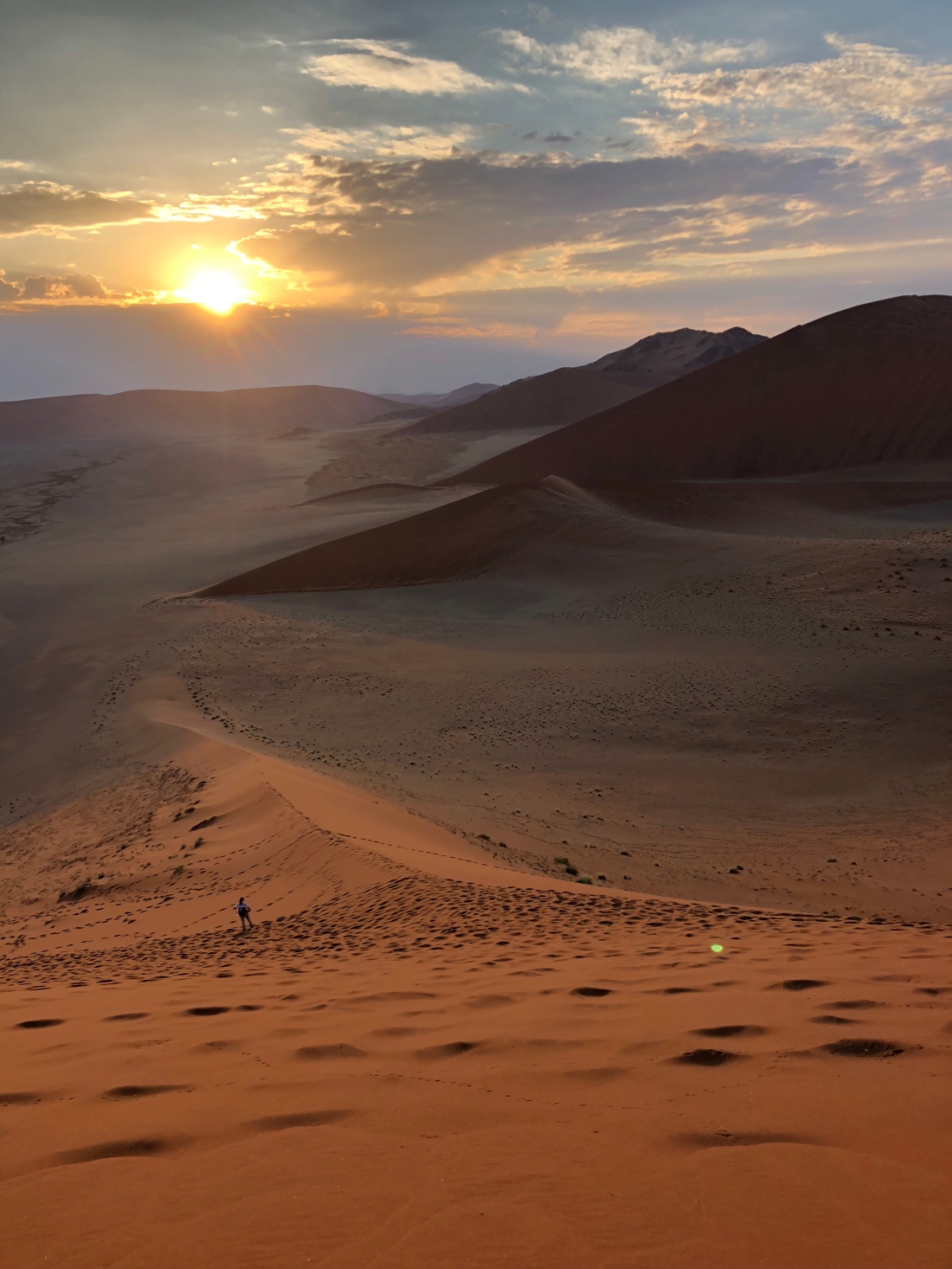 Cornelia was brilliant at just sitting still for a while, but once people had started running down the side of the dunes in front of us, she was ready to move. She and Ian slid down the dune a bit, before she clambered up again (it was hard work!!) and wanted to roly poly down this time. We tried several different ways of sliding and rolling down, much to her great joy! She kept asking when we would find Elia, but we hadn’t seen the family yet, so said we would head back to the campsite to find them for breakfast. 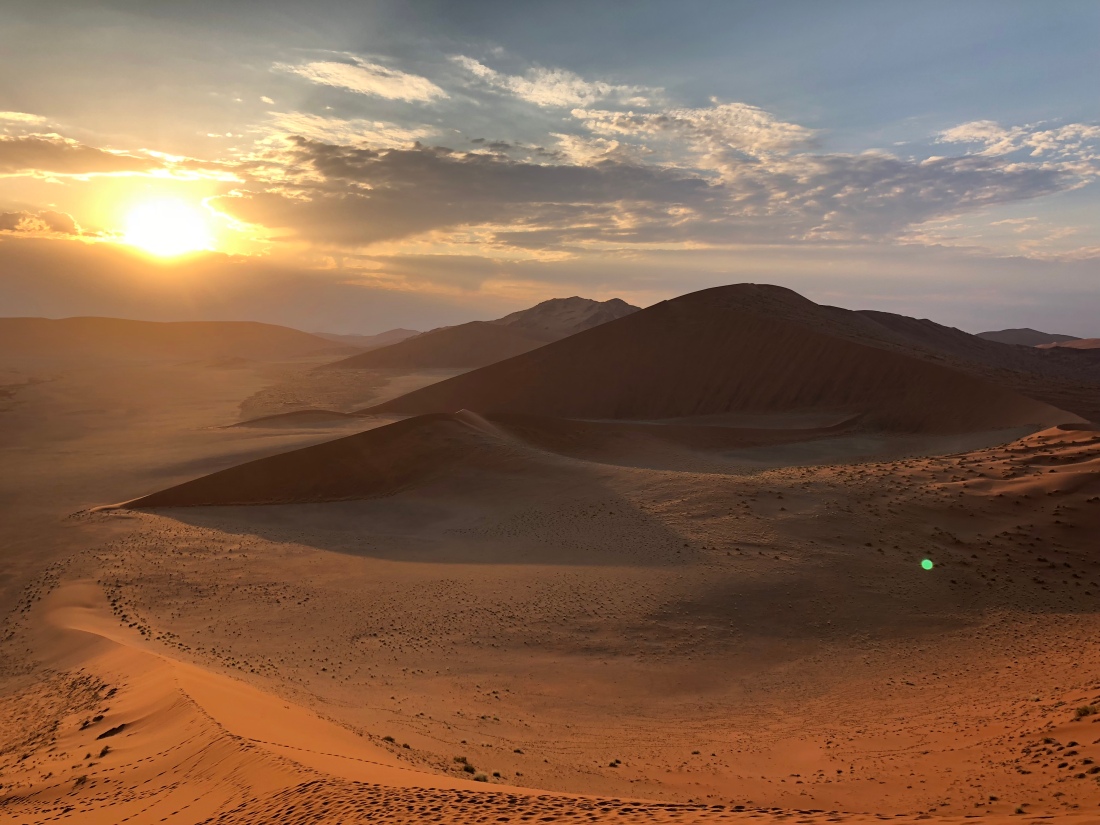 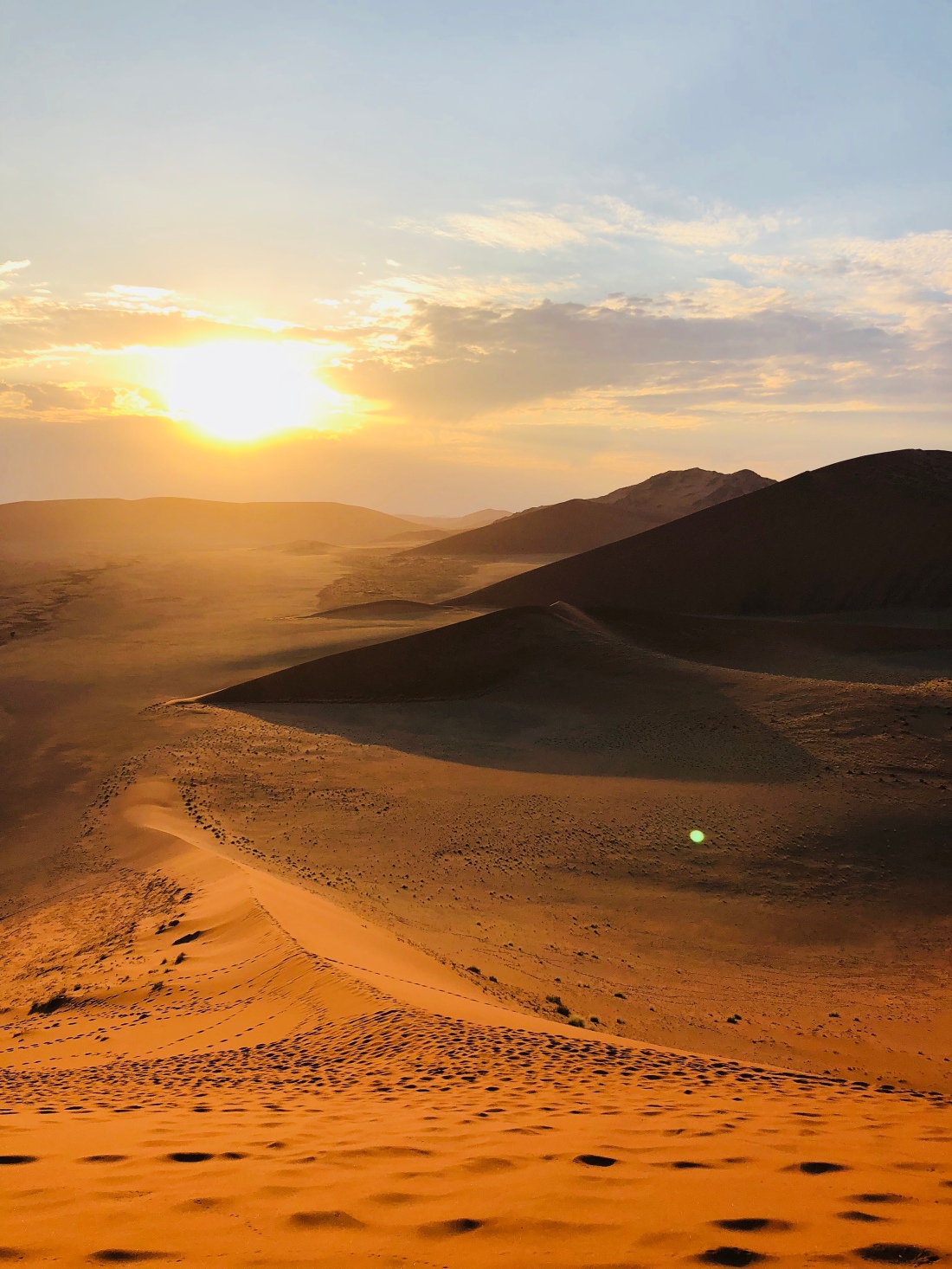 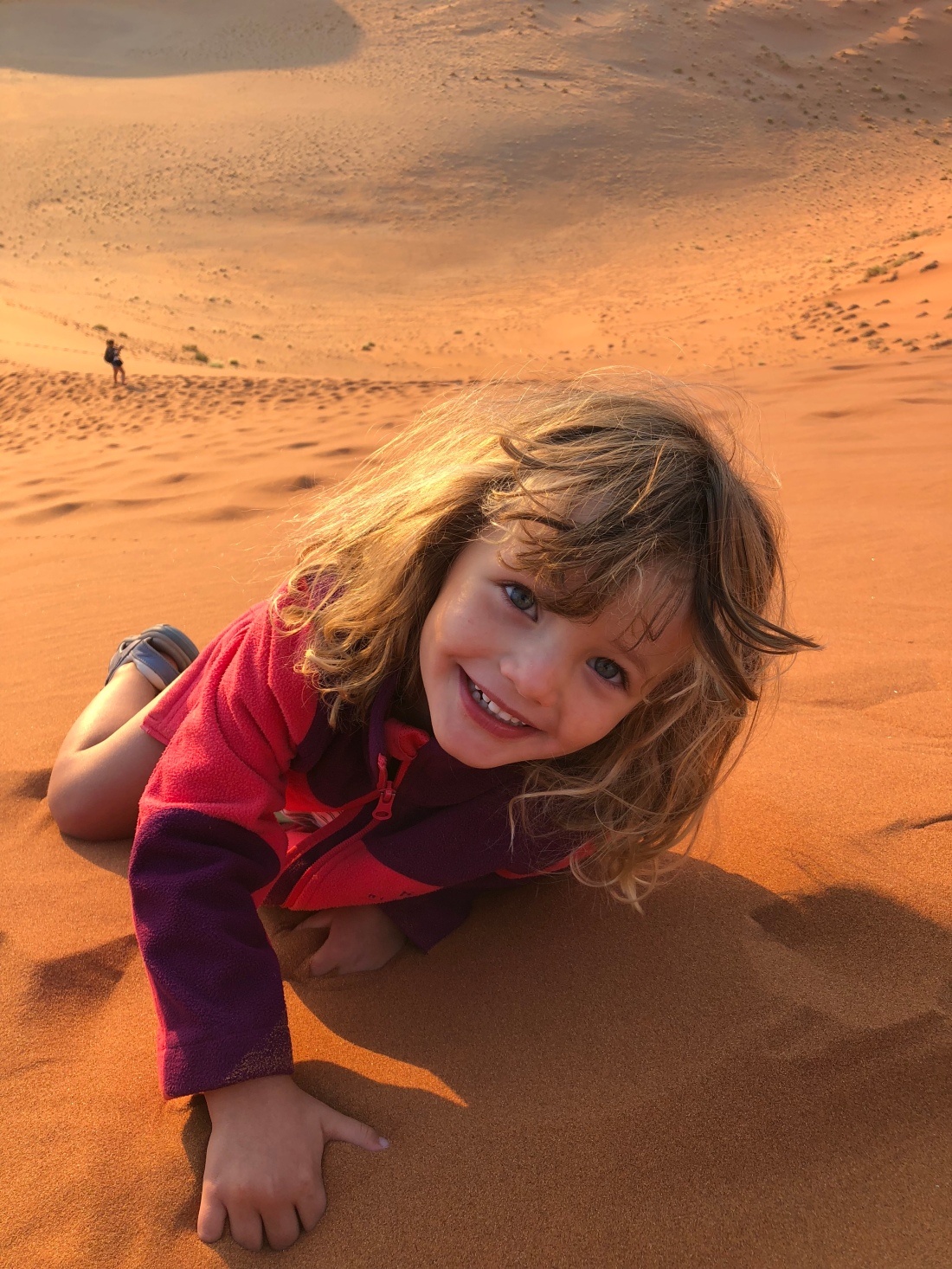 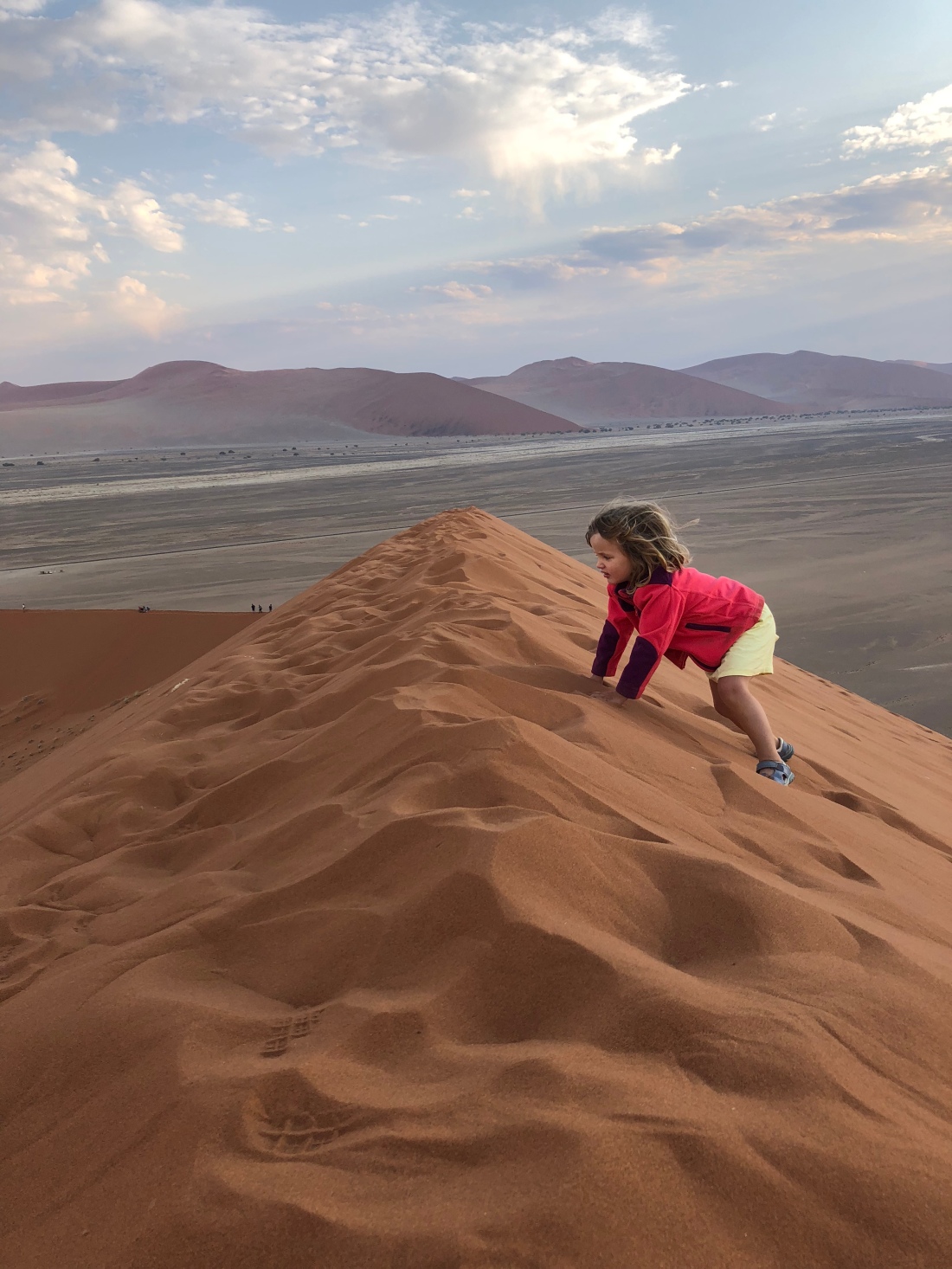 We descended the side of the dune, and walked around the edge, before setting off for Sesriem campsite again. 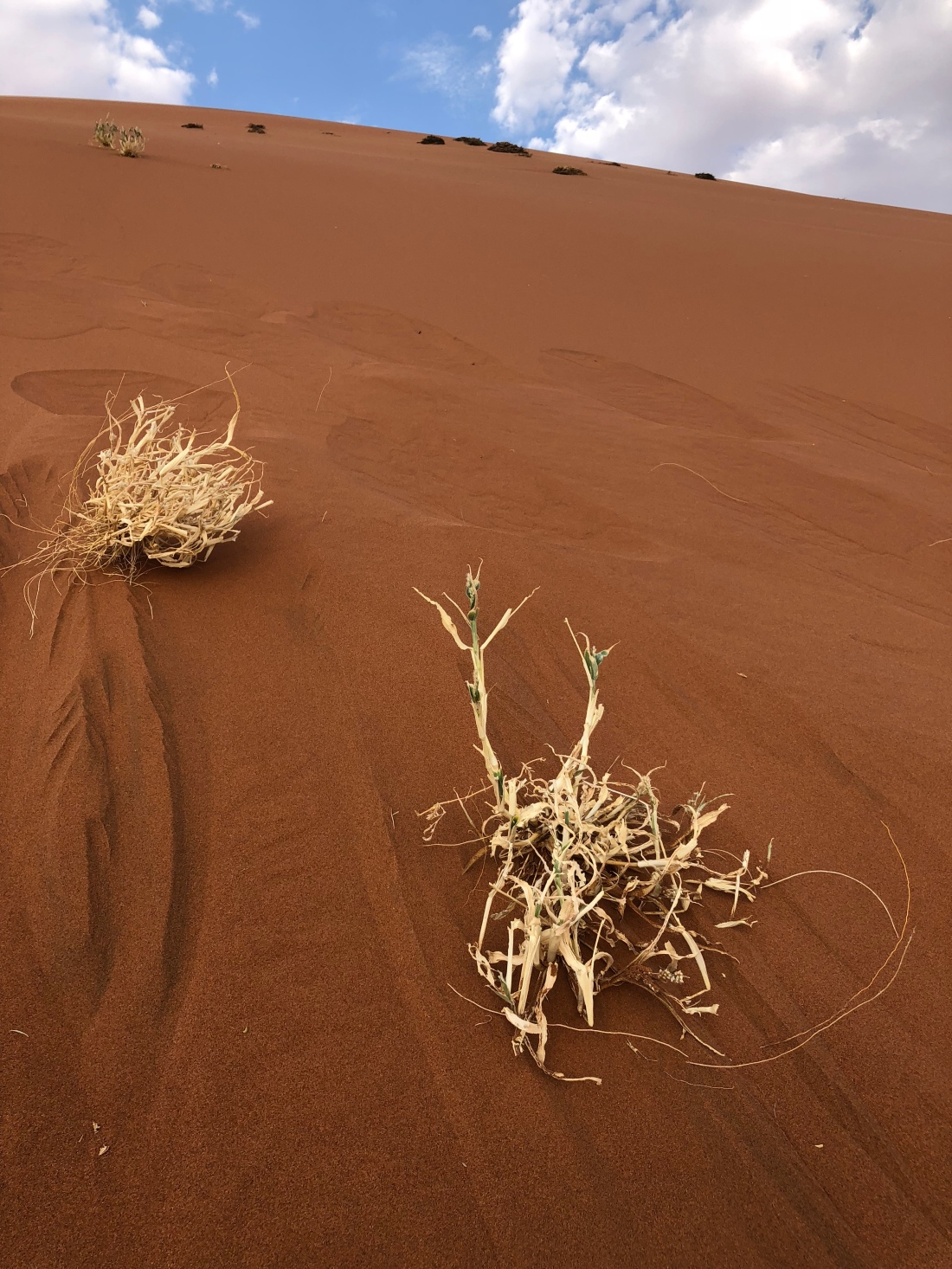 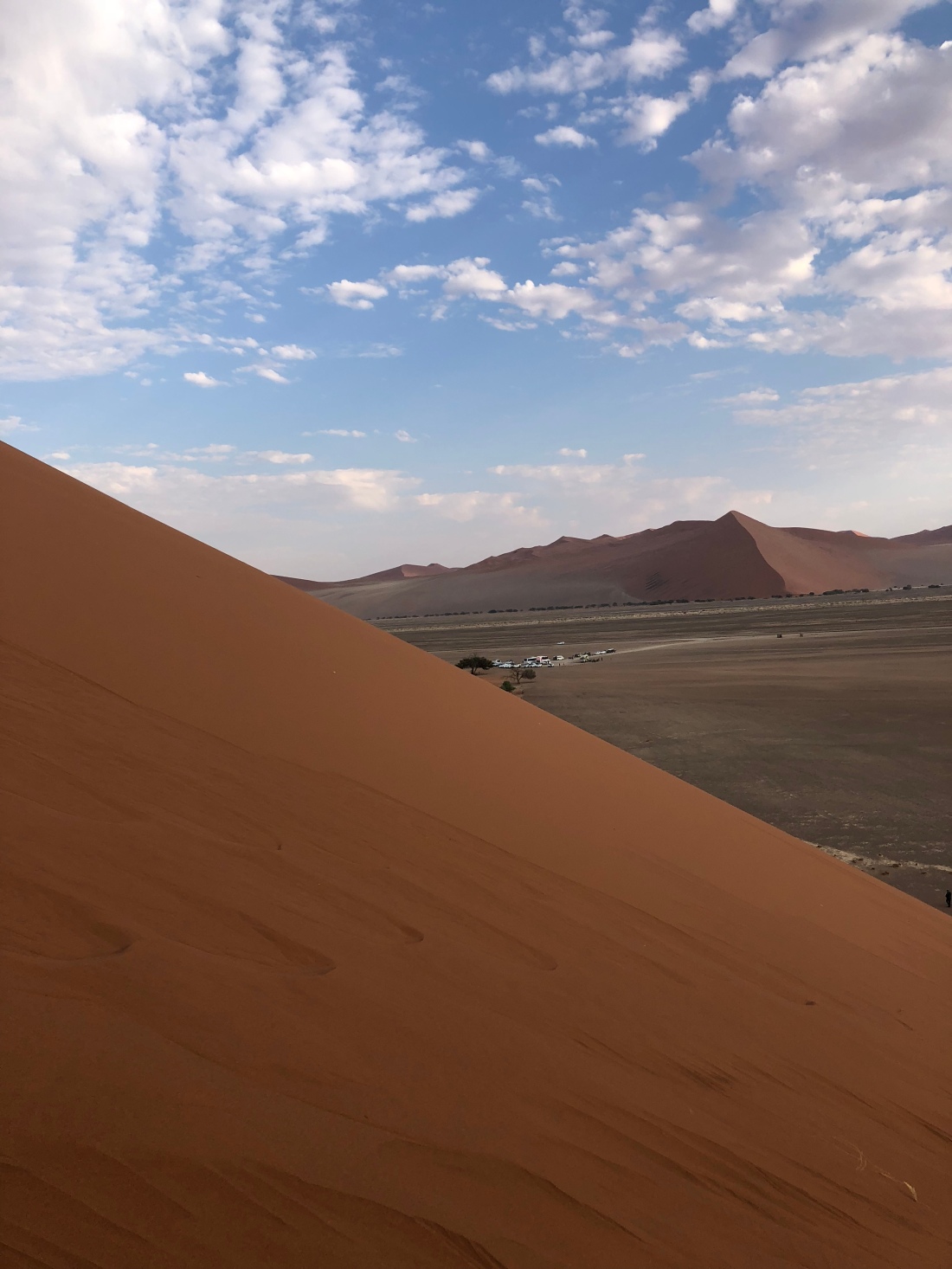 And amazingly, as we drove along the road, next to another dune I saw the silhouette of a slender woman, with a child that suddenly ran around from behind her. “Stoooop!” I yelled for the second time this week! We turned around and drove back and, hurrah, it WAS them! We could not believe our luck! The kids were so excited to see each other and immediately started chasing each other around, screaming gleefully. We pretty much had the whole place to ourselves. They hadn’t realised Dune 45 was a bit further on, so had stopped here and climbed up partway. (Elia was walking, and did incredibly well to get so far!) Manuel made us a frothy coffee – I love that they brought their milk frother with them – and we chatted, while Cornelia had her two Weetabix, and afterwards they did some painting together. We played a target game together, throwing stones into different sized rings worth different points on a target, drawn by stone in the sand, and then I suggested making them a pirate boat. I got my trowel and started digging and half an hour later, voila! Manuel supplied the sail and a flag and some levers, and Ian did the anchor and motor… 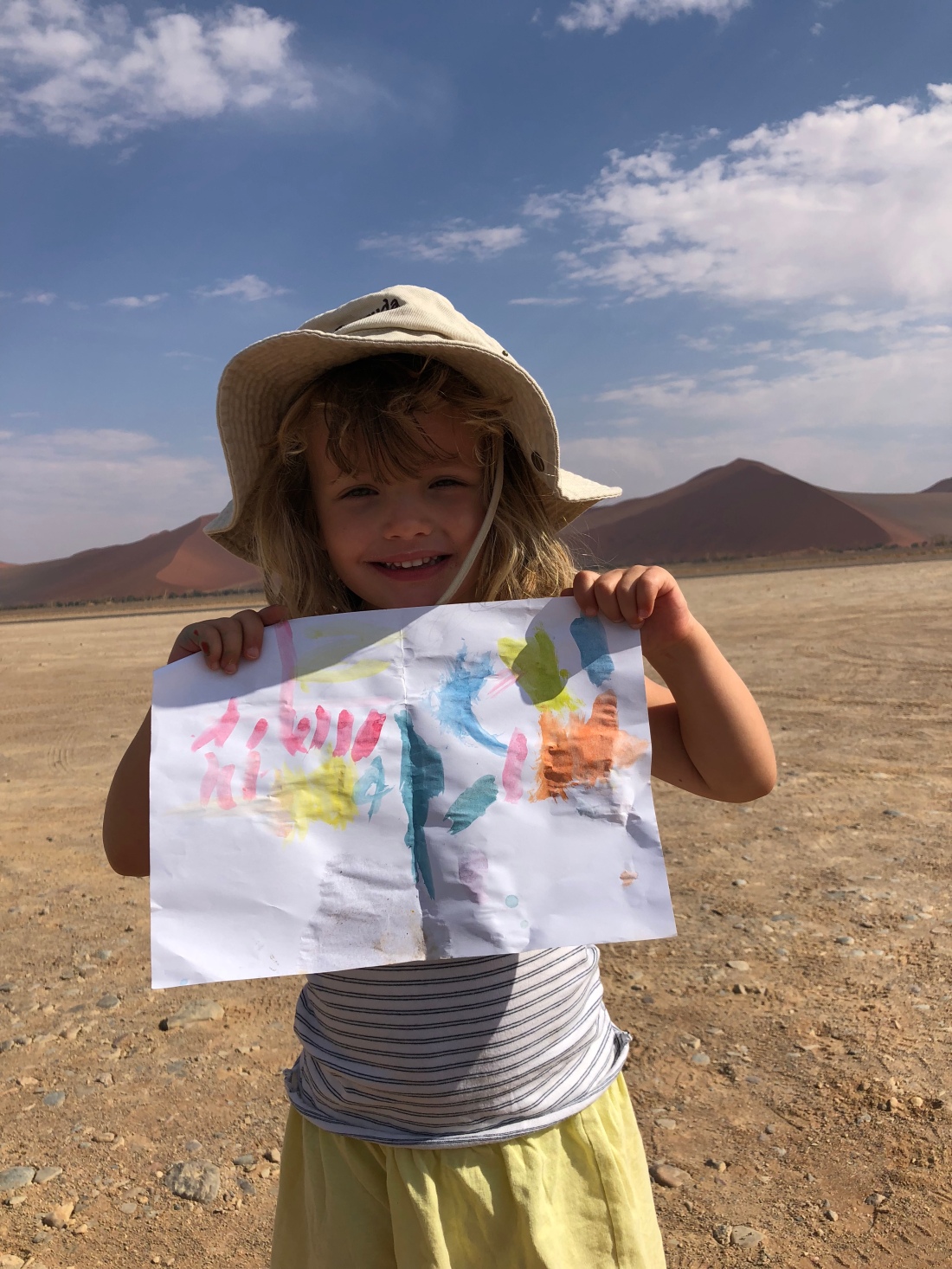 Of course, five minutes later, they had lost interest, but we were quite proud of it! The harmony of the morning ended when Cornelia moved “the plank” and dropped it on her toe. I rubbed the surprise away, but shortly after, I’d asked her to anti-bac her hands so she could have a snack and I noticed that she was hiding one hand from me. When I asked what the matter was, she burst into tears again, and said she didn’t want to show me and begged me not to look at it. I guessed straightaway that she had a splinter, and she buried her head into me as she sobbed “yes”. She didn’t want me to use tweezers to take it out and worked herself into quite a state. I convinced her to wash it in a bowl of water, before Ian and I held her tightly, peeled her little fist open, and tried to extract the splinter. Most of it came out, but a tiny bit stayed in, and I agreed that we could leave that bit for now, as long as she kept her hands clean. Drama over, at last, the children watched a bit of TV on her Kindle before we decided to make tracks. I needed the loo and was not ready to spoil this particular landscape!

Suzanne and I swapped numbers and we are hoping to see them again in a couple of days in Swakopmund.

We drove back to Sesriem and after I’d been to the loo, we left the campsite. At the gate, we were asked for the receipt that we received when we bought our Park Permit. Argh!!!! Yesterday, I’d been waiting in the queue to buy our permit, when the lady at the desk called me forward to the Camping section, where I checked us in. But the queue for the permits had grown really long and I decided to come back later to do this. If course, I completely forgot to do it, and this morning when we left, the desk was closed. Anyway, at the gate, I shuffled all of our papers trying to look for the non-existent receipt, and he said “Don’t worry, just go, I’m sure it’s fine” and sent us on our way. But my conscience was too much to bear and I asked Ian to turn around and go back. I explained to the guard that I didn’t think I had bought the correct permit, and he said “No problem” and waved me back in to get one. Honestly, that would weighed on my mind forever, and it was with a clear conscience that we set off again, travelling the short distance to the Namib Desert Lodge Campsite.

Well, this is another surprising oasis in the middle of nowhere, set back six kms from the main road. We ignored the campsite sign and headed for reception, to be greeted by a cold flannel and a smiling reception. I checked us in and asked where the restaurant and pool were. The receptionist showed me the way, and I went back to collect Ian and Bugsy. 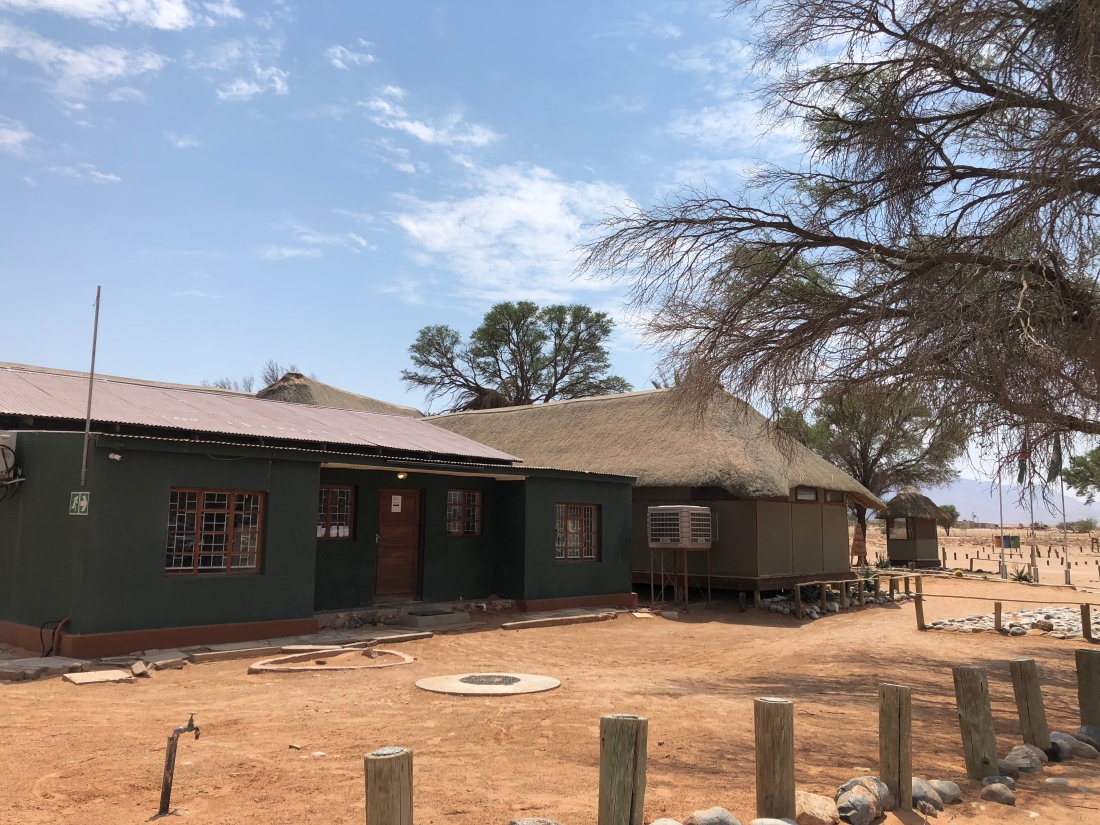 We spent the whole afternoon by the poolside, having eaten a lunch of Greek salad (me), a toastie (Ian) and a delicious pizza (Bugsy). She was really keen to get in the pool, but before we made it in, she fell fast asleep on my lap. I waited until she was sound asleep, then moved her to the lounger by herself where she stayed asleep for over an hour until we decided that we must rouse her, or suffer the consequences later! 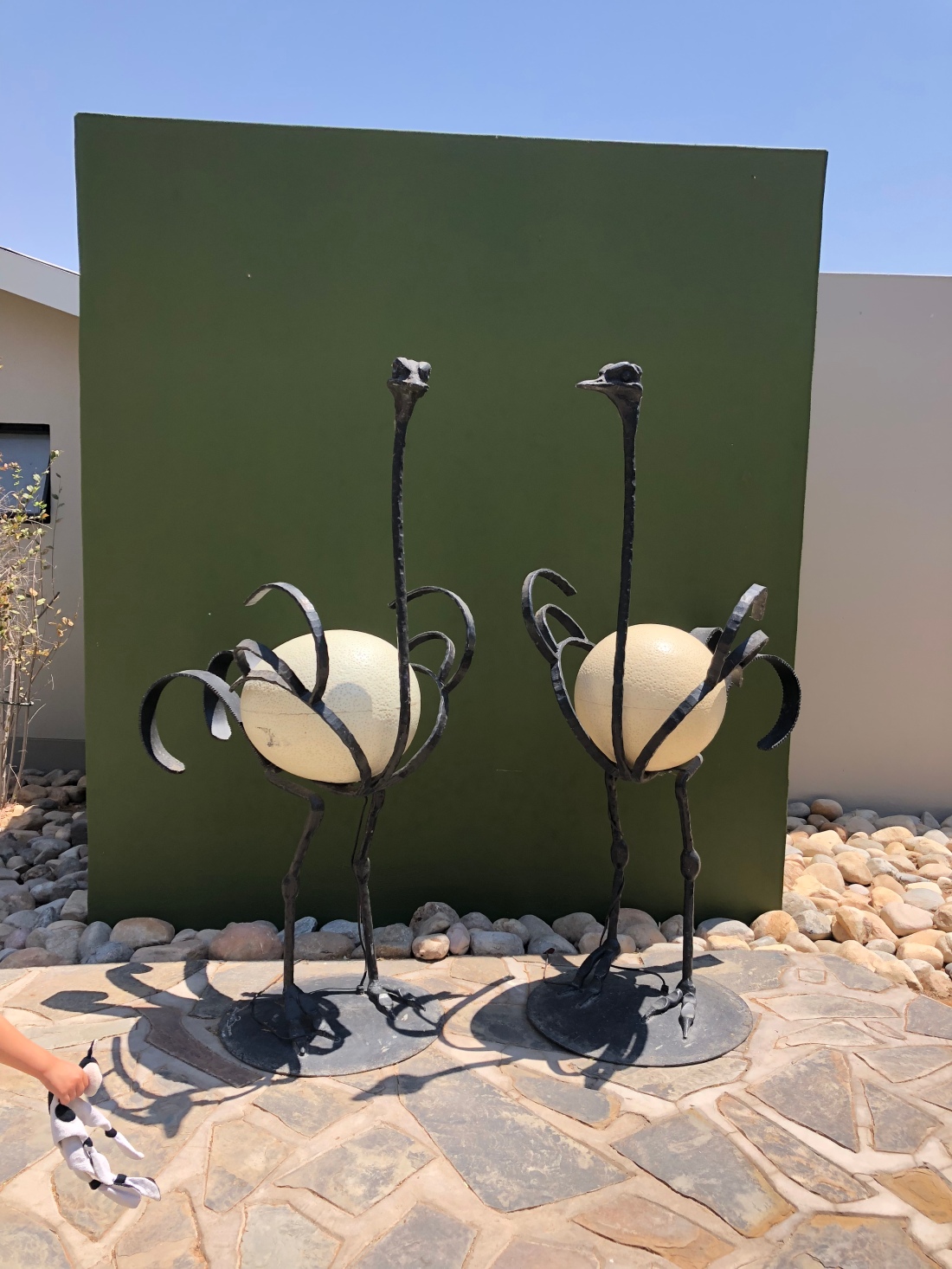 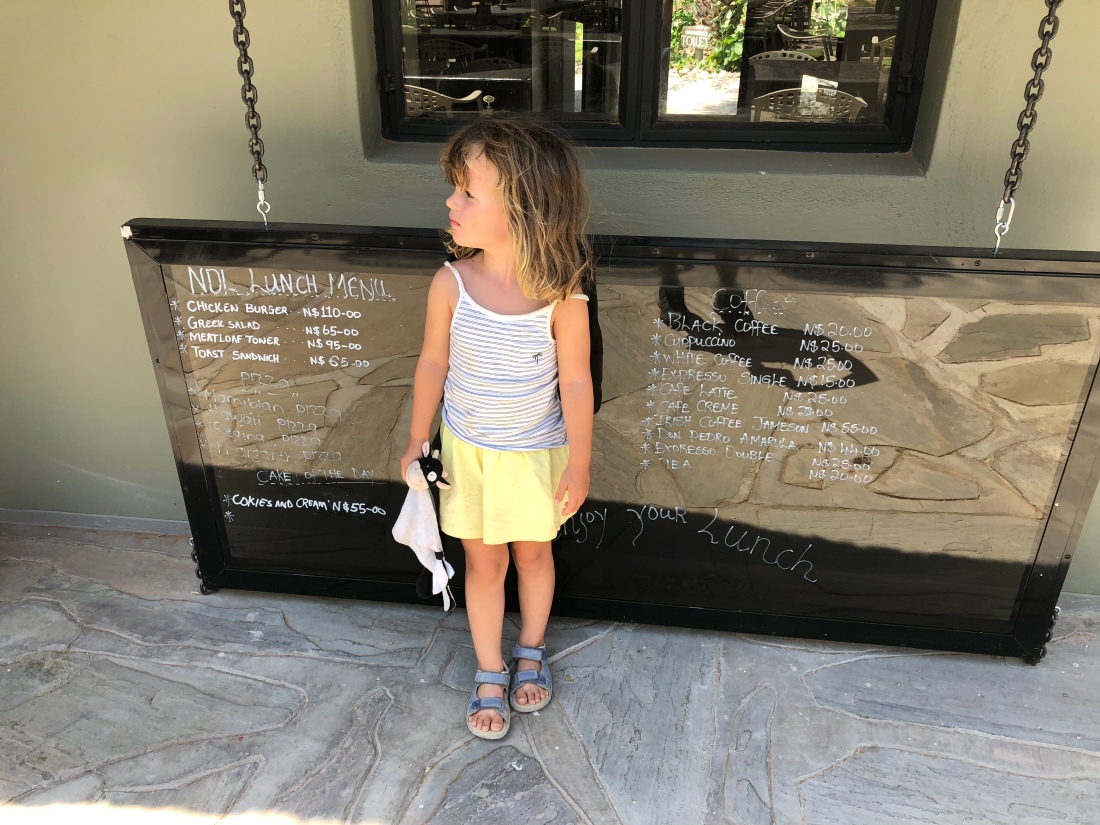 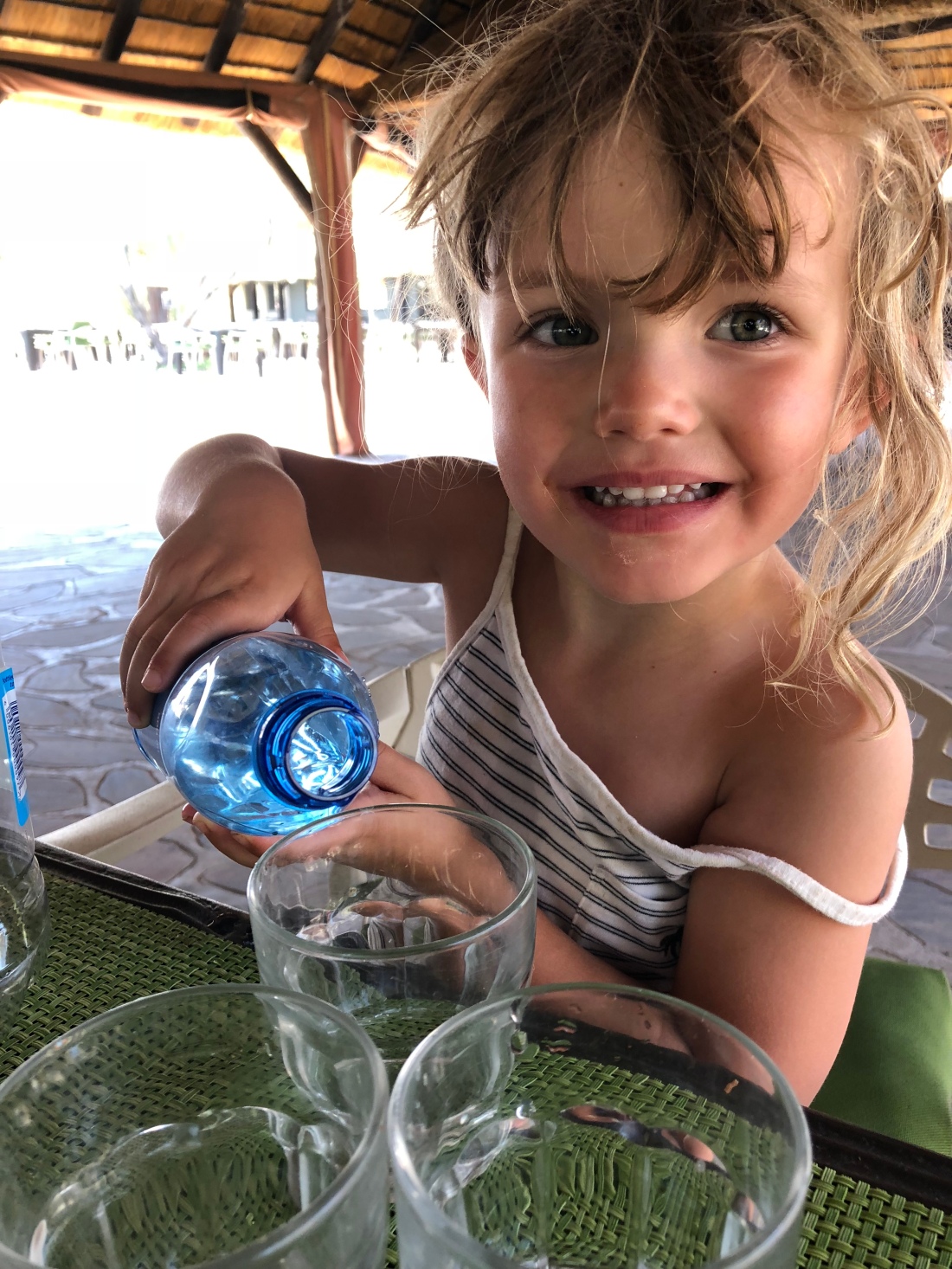 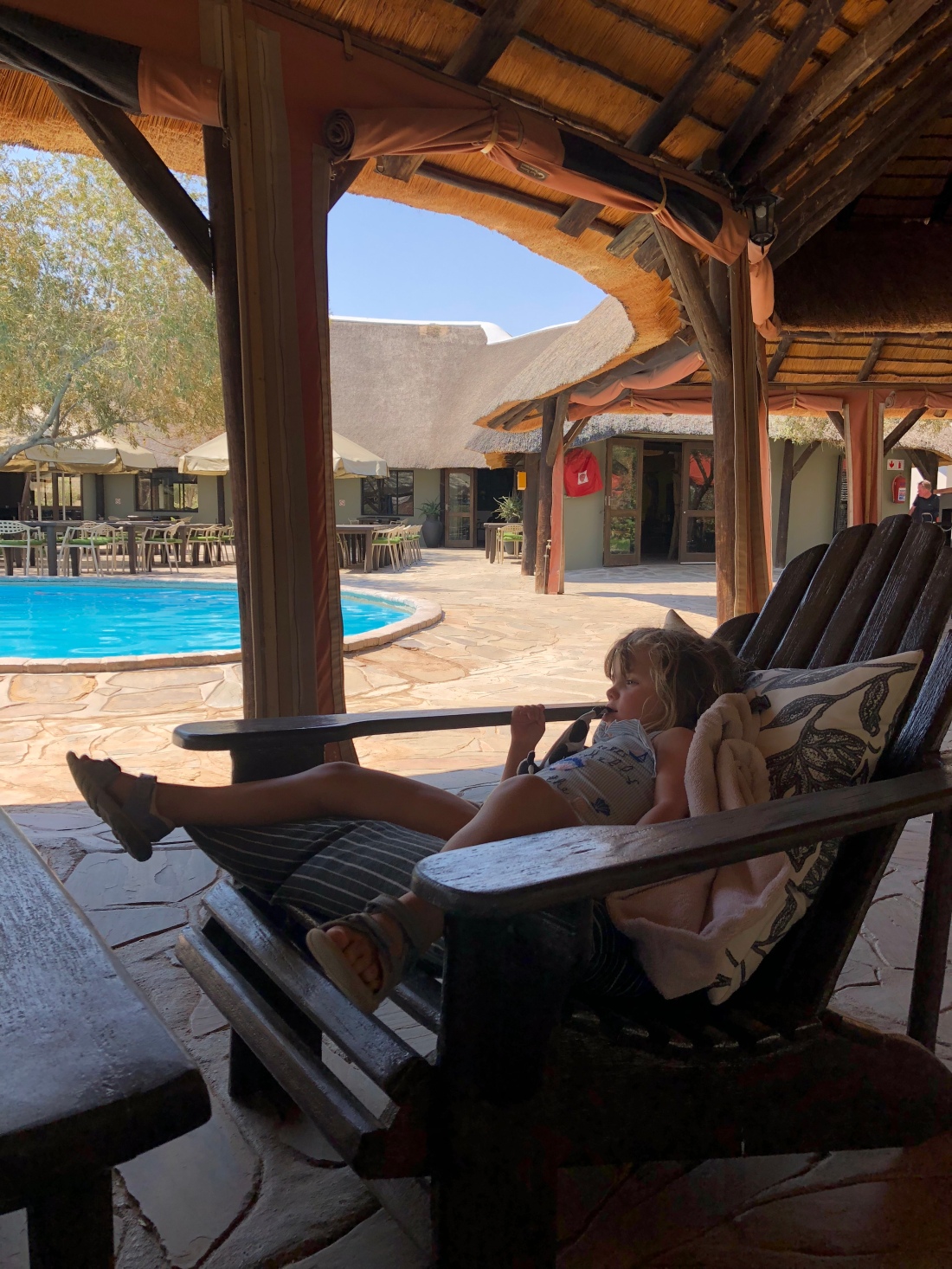 Hmmm. That didn’t work terribly well! She was miserable and sad and refused to go in the pool, but didn’t want to not go in the pool either. In the meantime, another family were having a brilliant time and their little boy was splashing around in the water, squealing in delight. I thought this might motivate Bugsy, but nope. She refused to move from my side and certainly didn’t want Daddy anywhere near here, which only frustrated Ian. Eurgh! What should have been a super afternoon relaxing by the pool turned into a fretful and tense time.

The mood continued all the way to the campsite, which was a 5km drive from the main lodge site. The campsite is quite bare, but we found what we thought was a decent pitch, right by the restrooms. There weren’t many people here, so we didn’t mind being near the loos, but the problem we had was the wind. It was impossible for us to use the gas stove, as it kept blowing out. I went for a evening run just before the sun set, in the hope that Ian and Cornelia might be better together without me around for a bit, but when I got back, the mood seemed to be continuing. 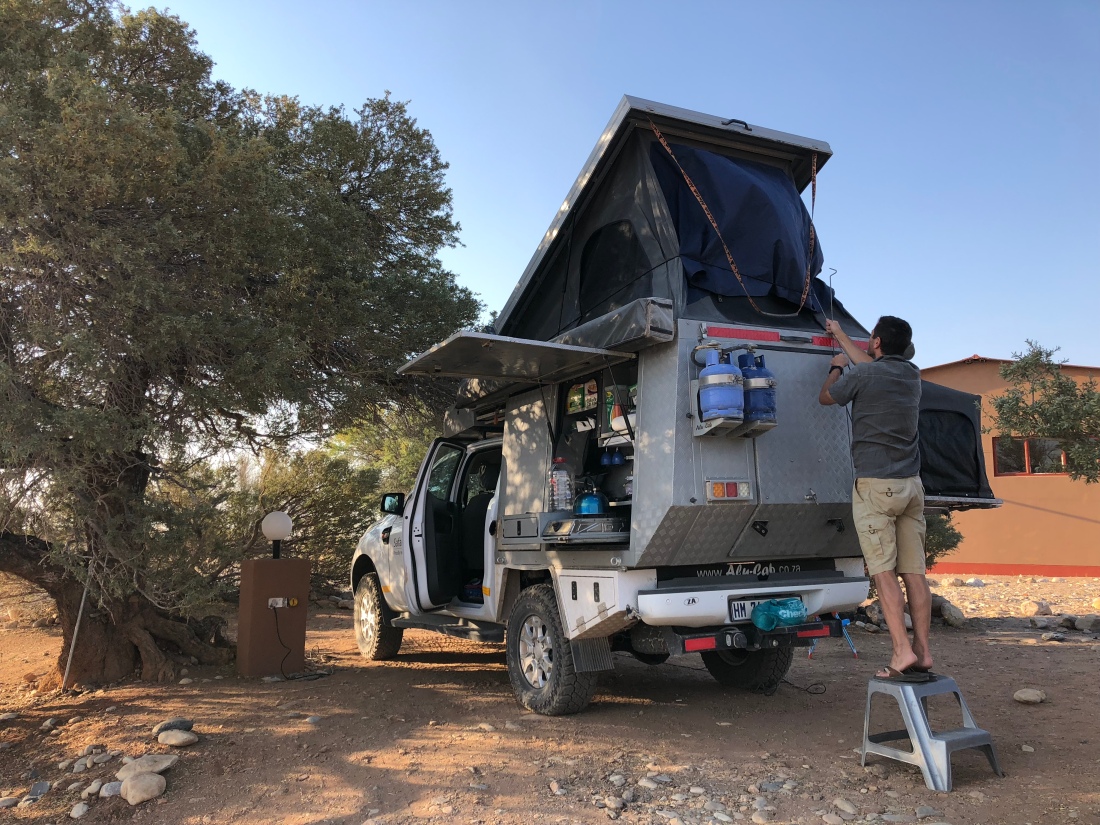 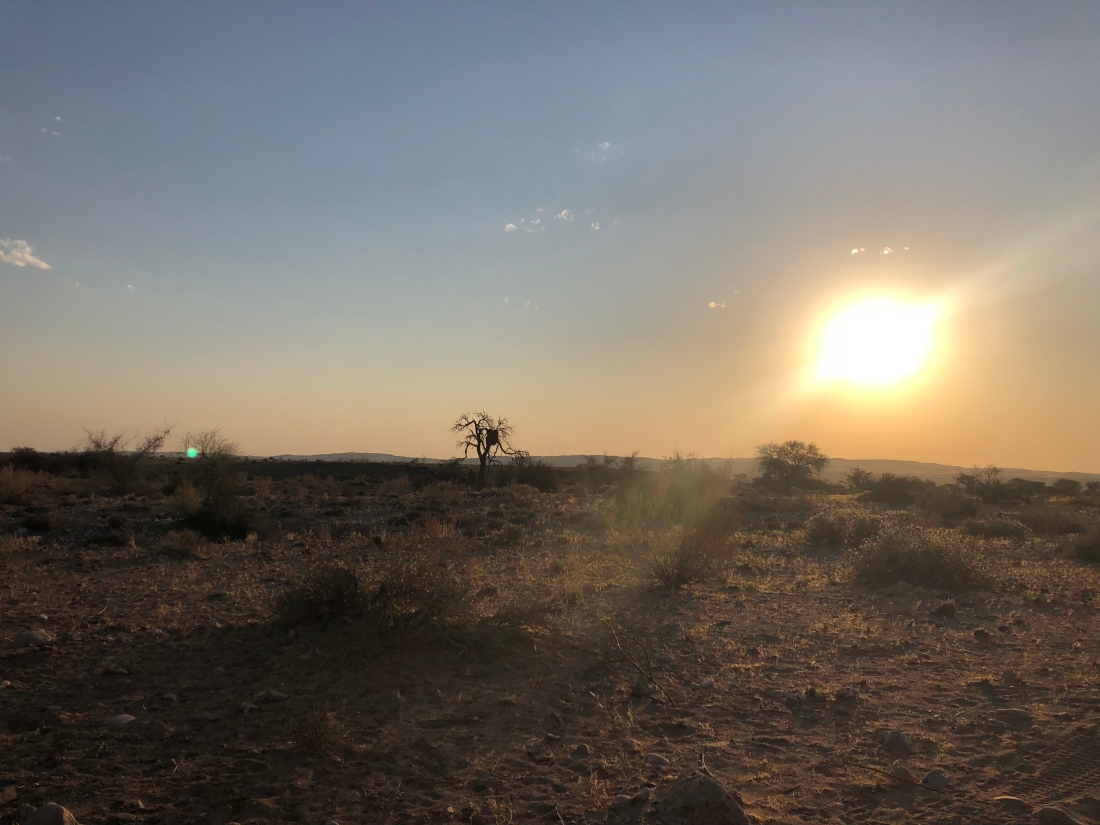 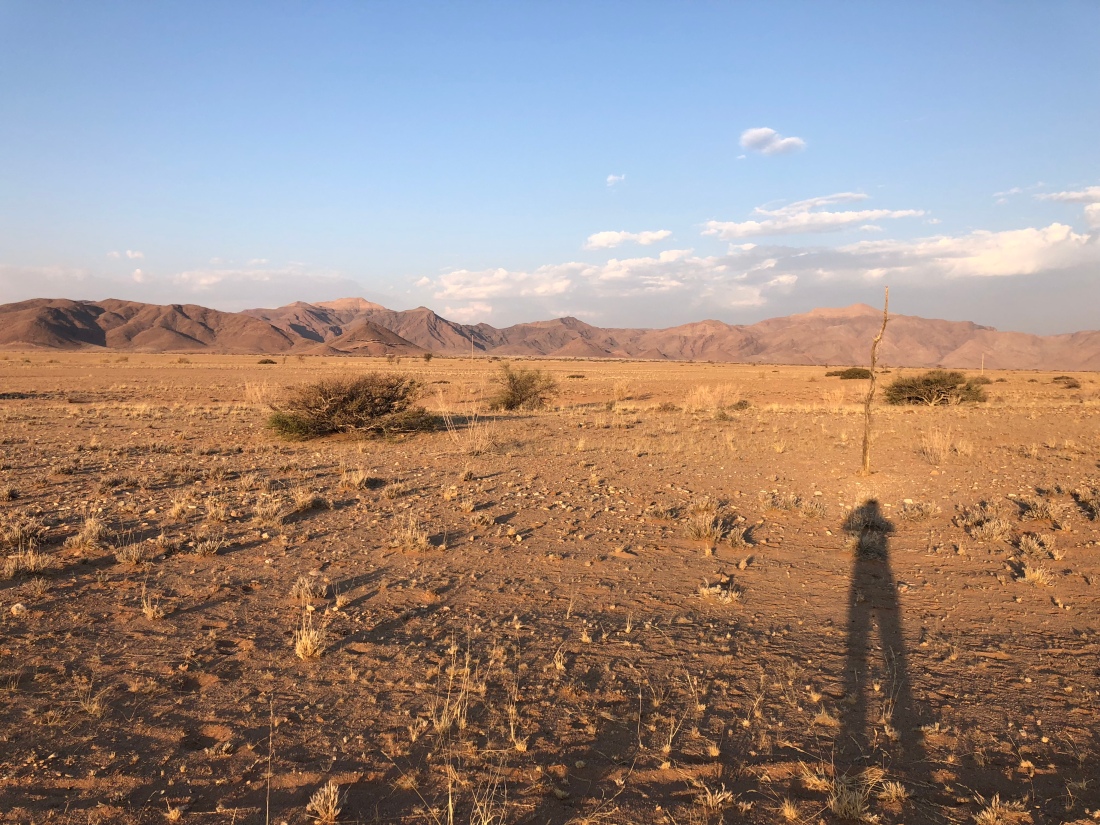 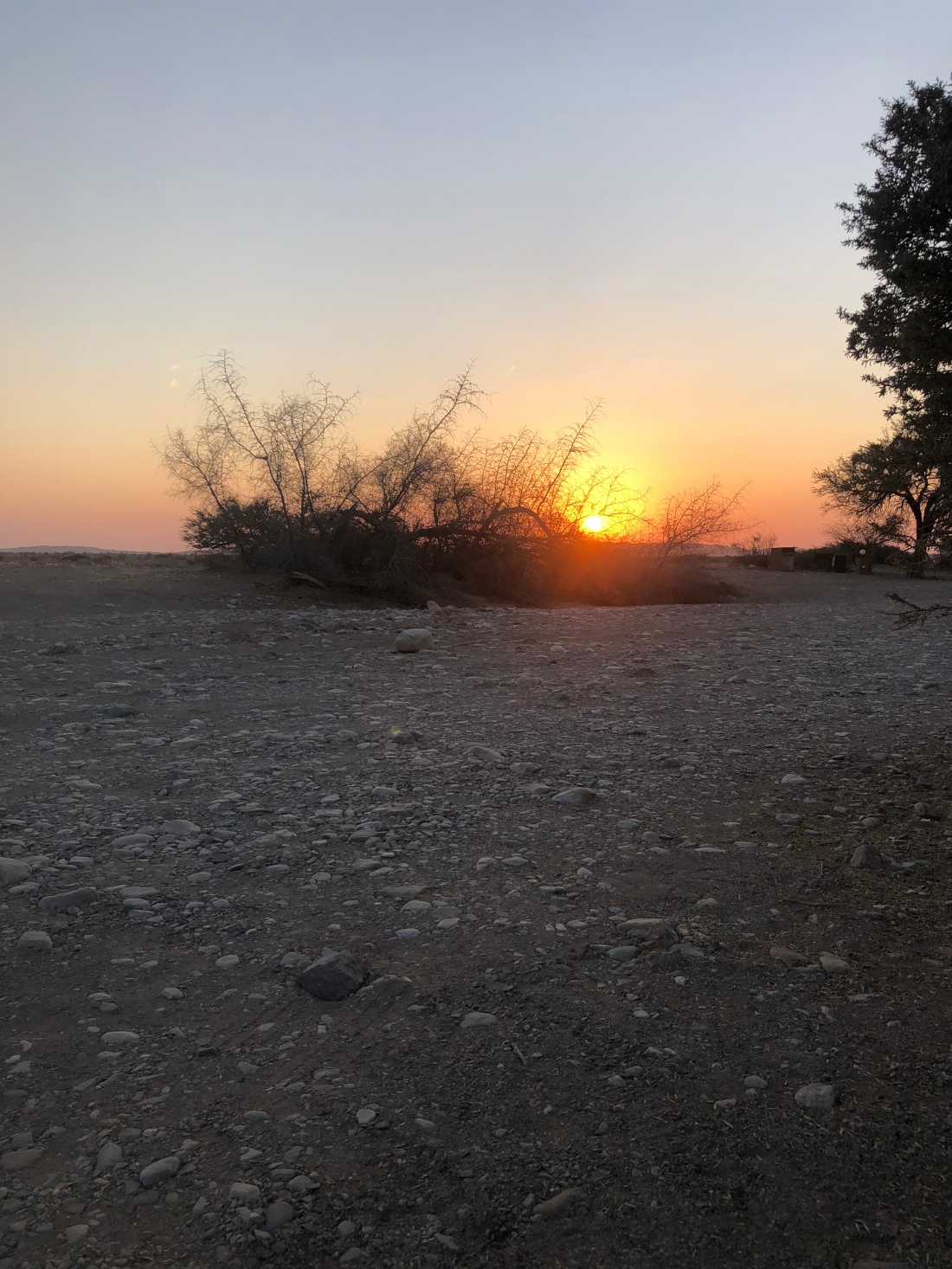 The wind was pissing Ian right off. The gas went out several times, so we decided to boil the potatoes in the fire that we finally managed to get going. I then warmed the chicken casserole (that I’d made in the Family Hideout) and eventually at around 21:00, dinner was ready! 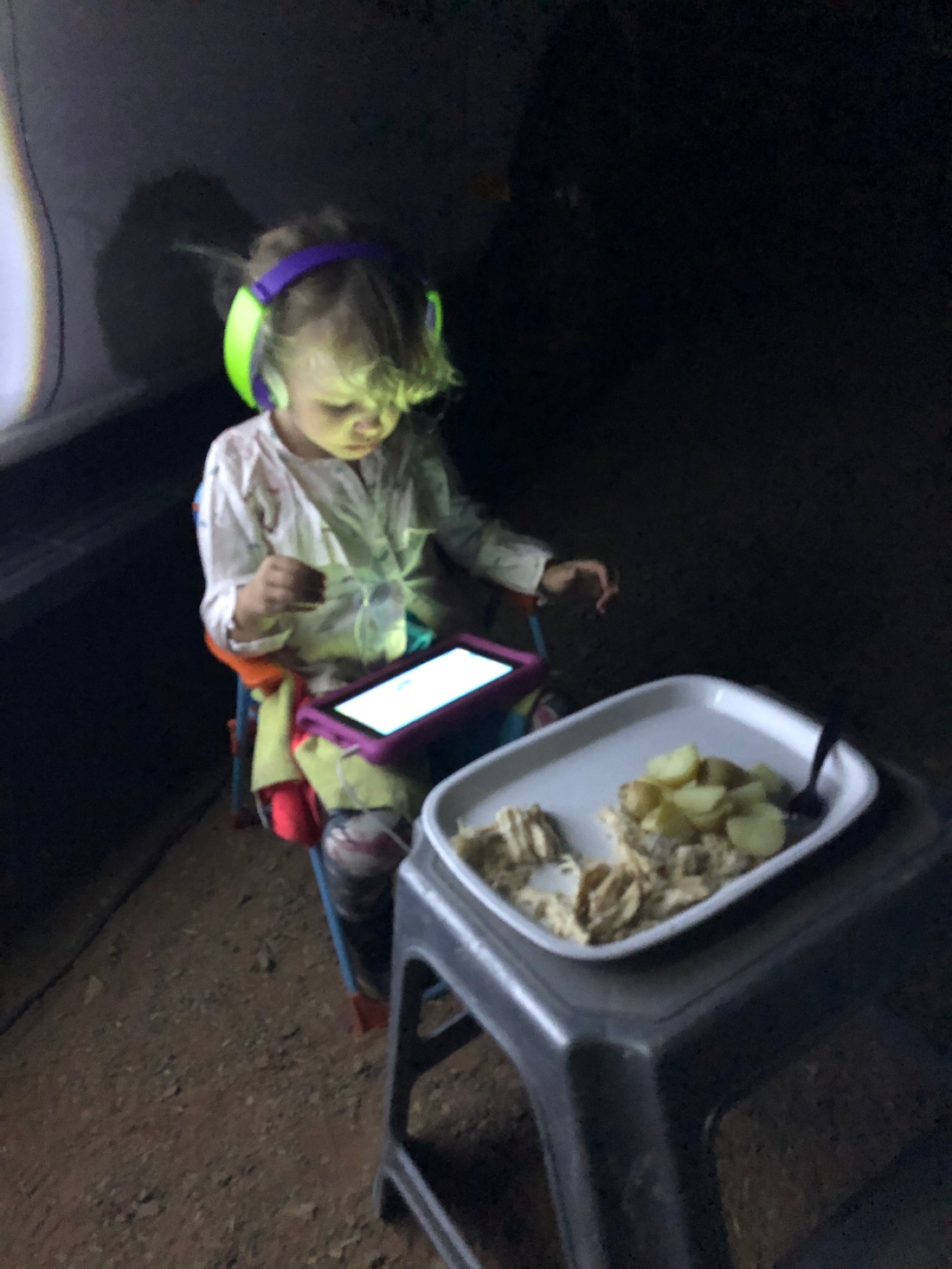 In the meantime, the family that we’d seen at the pool earlier had come over with a video of the seal kayaking trip they did in Swakopmund (our next stop), much to Cornelia’s delight! They told us how fabulous it was and we would LOVE to do the same in a couple of days. Bugsy then wanted to find Squishy to play with the little boy (Karl, also four, but much smaller than Bugsy) but everything is in chaos and I couldn’t find him, so she just kept running over with her torch to say to them, then running back again.

After we had eaten, she was playing with her smouldering stick and fell over the stones that had acted as our windbreak for the fire and, naturally, burst into tears. It took lots of rubbing to soothe the crying, and her little hands were blackened from them!

Eventually, I went for a much-needed shower, but Ian and Cornelia were still at loggerheads with each other. Within minutes, I could hear her crying and Ian getting cross again. It ended up with Cornelia wanting to shower with me tonight, Ian saying no, it was too late, and me saying yes, that was a great idea, as we’d wash away the dirt of the day and just settle her down ready for bed. Whoops.. 😳 Anyway, she did shower with me, and it was exactly what she needed. She fell asleep with me cuddling her in her little bed. I could’ve stayed there all night, but I went up to my bed and watched the stars for one last time in the desert sky.

One thought on “Big Daddy”