Ian and I both had a great sleep, but Cornelia won the day (or night!) in terms of sleep… 13.5 hours! She woke up just before 10:00 and there hadn’t been a peep from her all night. Ian had had time to shower and I’d been out for a run (sadly only a mile, as I’d desperately needed to return to the loo 😳) before she had risen!

She was in a lovely mood, very happy and chatty and was looking forward to seeing Somers again. No matter how many times we told her that he was at school, she kept asking when she’d see him. Bless her!

Once we’d had breakfast, we had to work out what we were going to do today. After some thought, we agreed that staying at home today, sorting out our luggage and unpacking, and giving Cornelia some time in the pool again would be our preferred option. So that is exactly what we did! Cornelia was thrilled to be allowed in the pool again, and Ian went in with her again as I’d already showered and done the whole moisturiser thing and, frankly, didn’t want to do it again! Mind you, the humidity is quite high in Bermuda and I was sweating quickly anyway…! Jules was inside doing life admin stuff, so we had a lovely relaxing morning just hanging out. 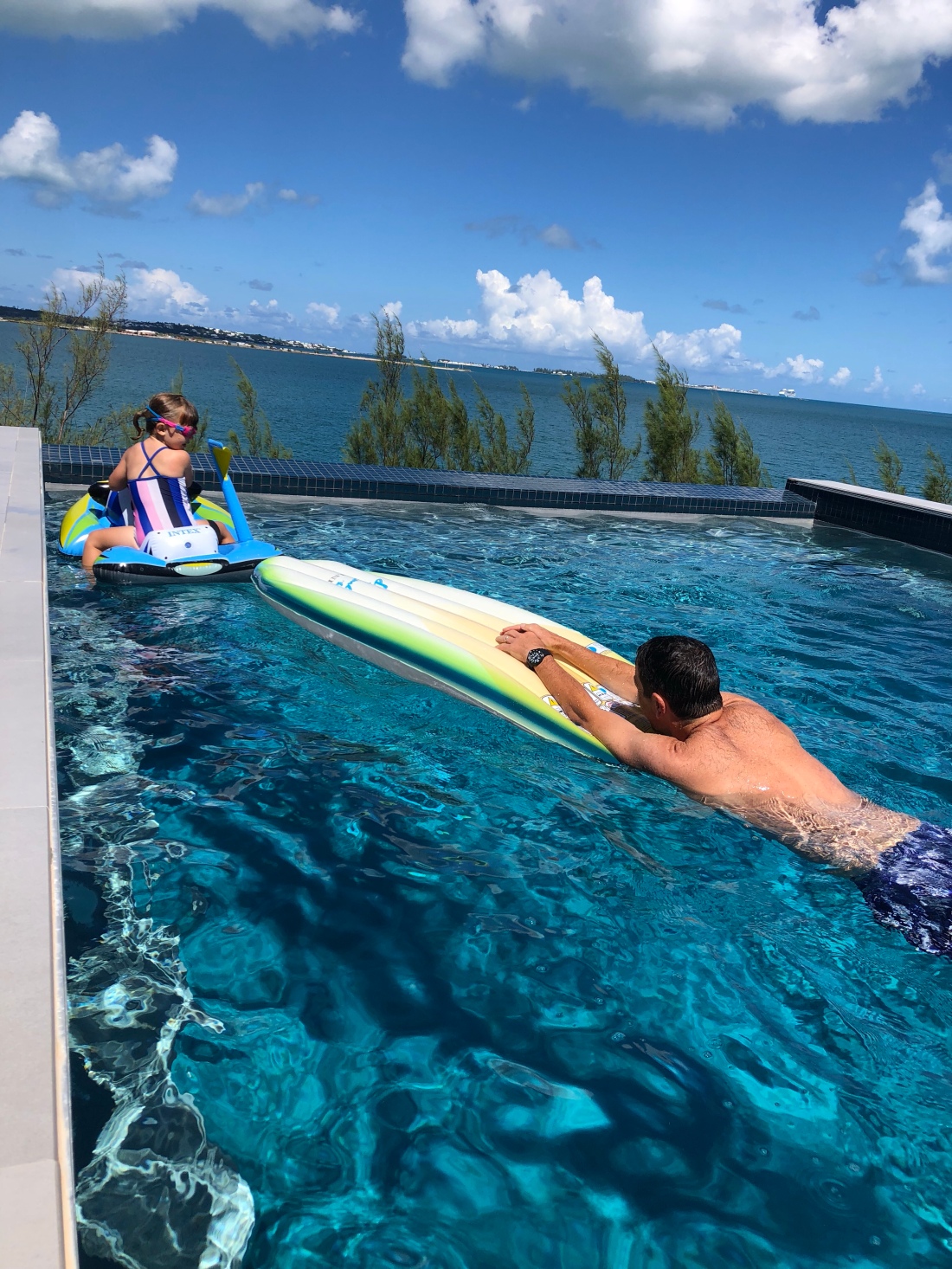 Julia was going to pick up Somers from school and take him to his after school club, so she dropped us off in Hamilton town centre for a wander around and explore. The town is made up of three main fairly short streets, but they are almost all independent shops exclusive to Bermuda. In particular, there is only one fast food chain, KFC, here. Apparently they got in before Bermuda regulations changed and prohibited any other chain food restaurants.

First stop was an ice cream for Cornelia, which melted terribly quickly in the heat and transformed her from a smart little girl into a chocolate-covered mess! She resorted to drinking the melted soup from the cone in the end. 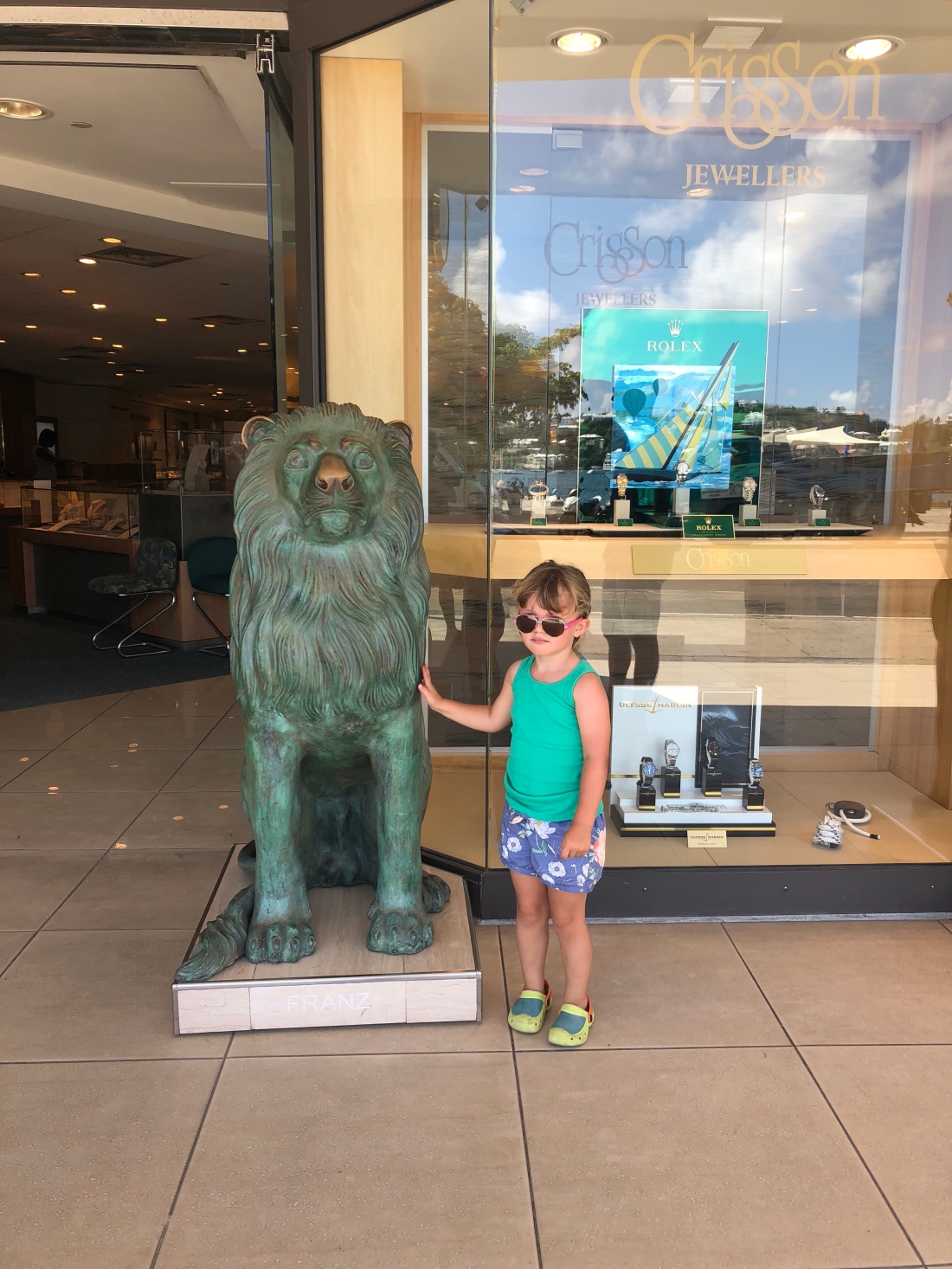 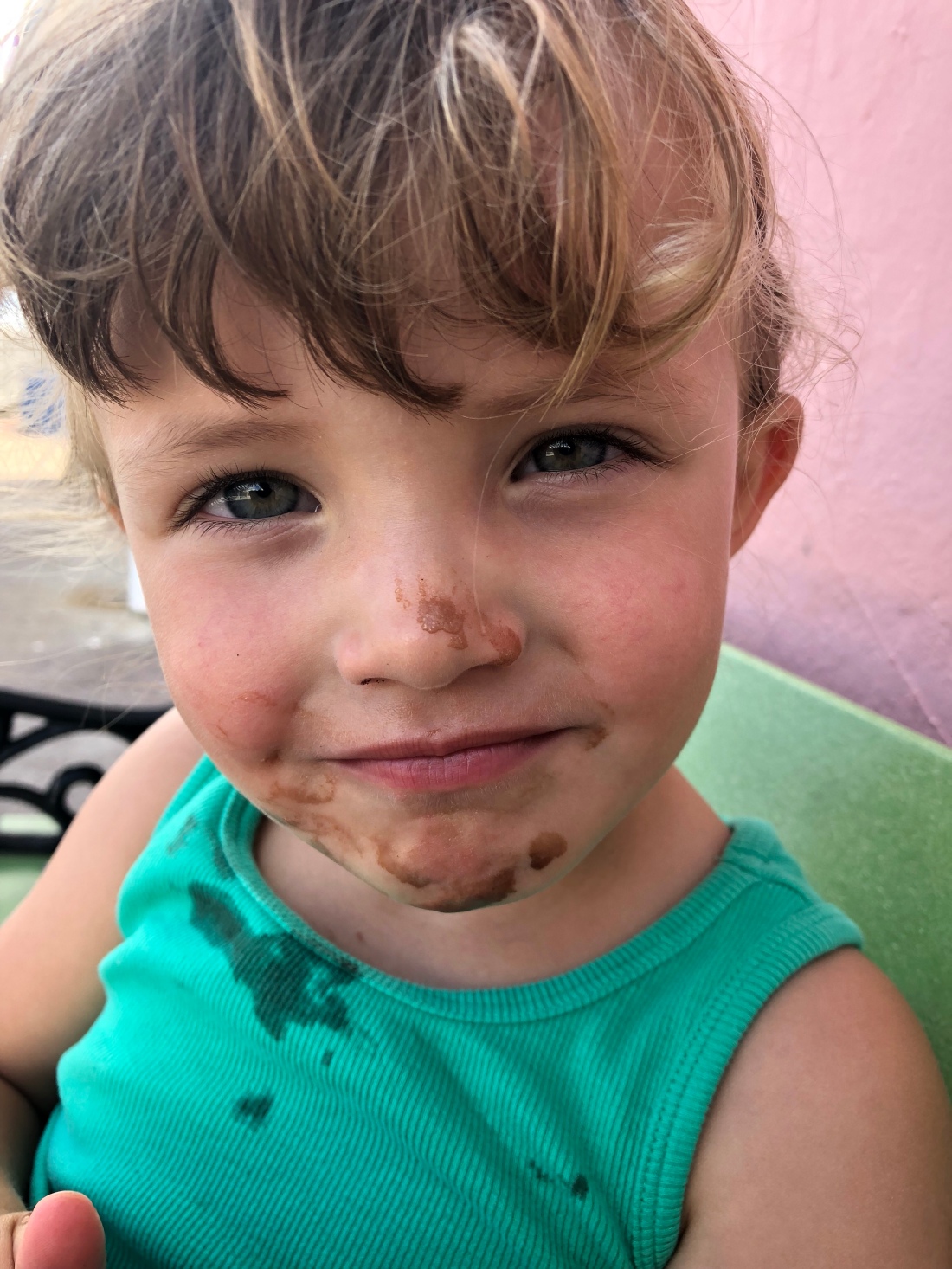 From there, we went into almost every little shop, looking at all the clothes and sourcing our usual magnet and country sew-on badge for Cornelia’s rucksack. She also ended up with a pirate bandana and a sun hat for Africa. Ian bought a T-shirt, although he’s really after a pair of genuine Bermuda shorts (having already ticked the Hawaiian shirt box) and once I’d packed Cornelia and Ian off to the park for half an hour, I found and bought a little clutch bag that I don’t think I really need, but comes with a USB phone charger and a “safety” lining to help prevent your credit cards from being cloned etc. To be fair, it will be really useful to have something I can put my cash and cards and phone, without needing to take my massive handbag! I had really been hoping to find a long lightweight dress, but everything I looked at was made for very tall people, and I’m not sure that a petite range exists anywhere here! 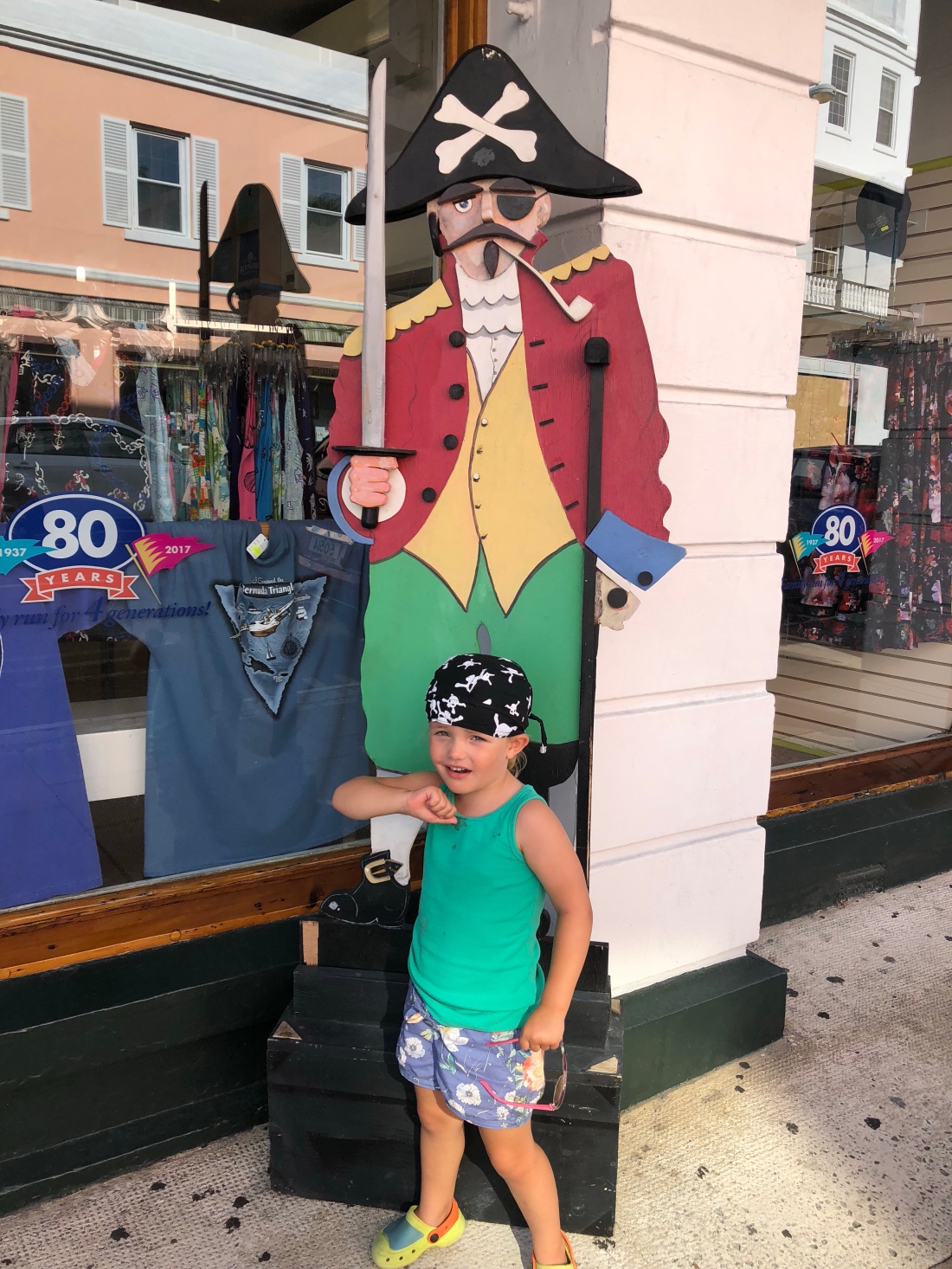 Anyway, after a reasonably successful shop, I went to find Ian and Cornelia, who had been searching for a playground in Queen Elisabeth Park to no avail. However, what they had found were pages of Tiny the Tree Frog on boards around the park together with illustrations. Ian wondered if there were more in another park (as the concept was called Book in the Parks) and we had just enough time to go to Victoria Park to find out. To Cornelia’s delight, there were indeed more storyboards in this park, and she dashed from picture to picture marvelling at Tiny’s adventure! 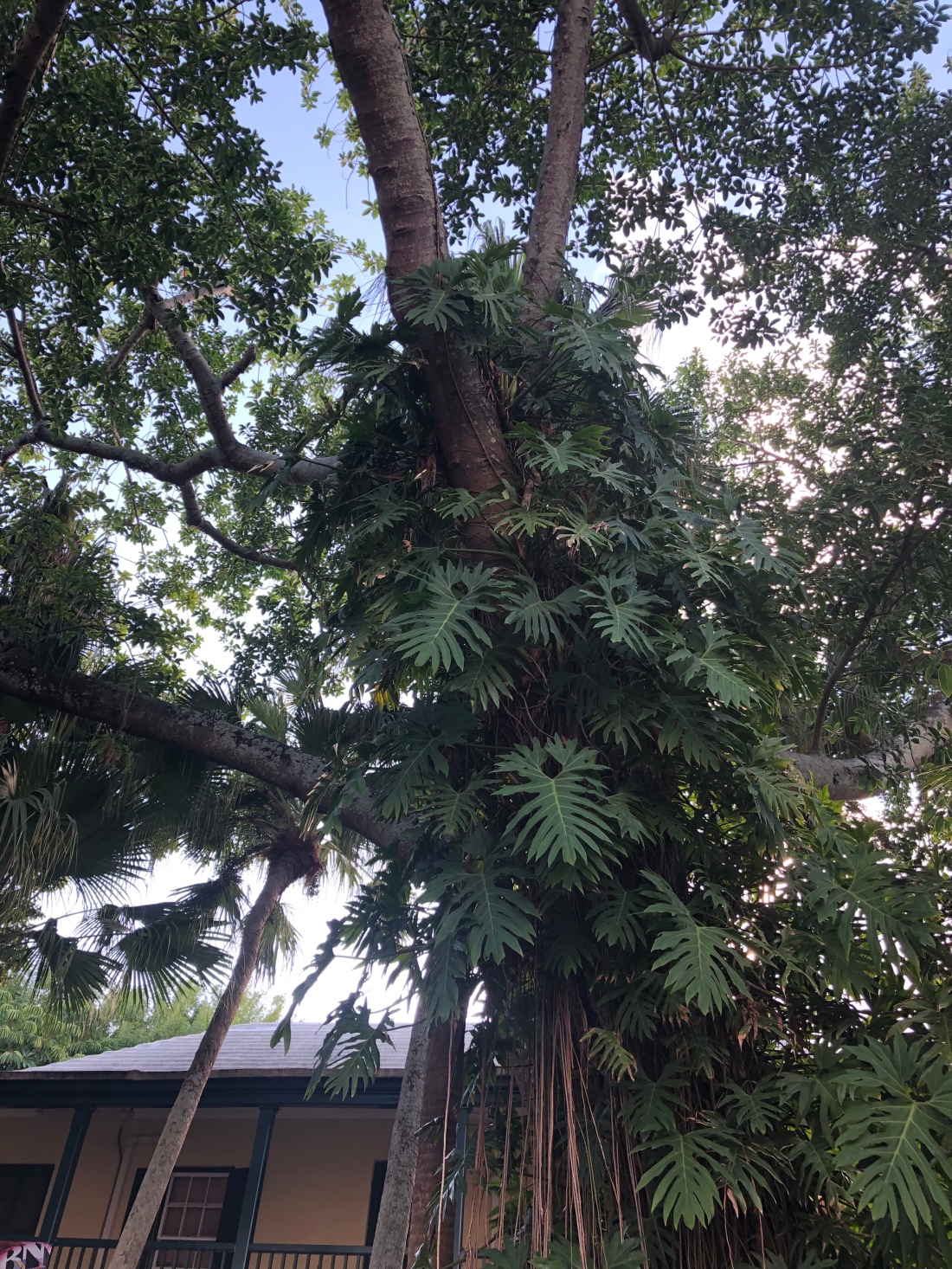 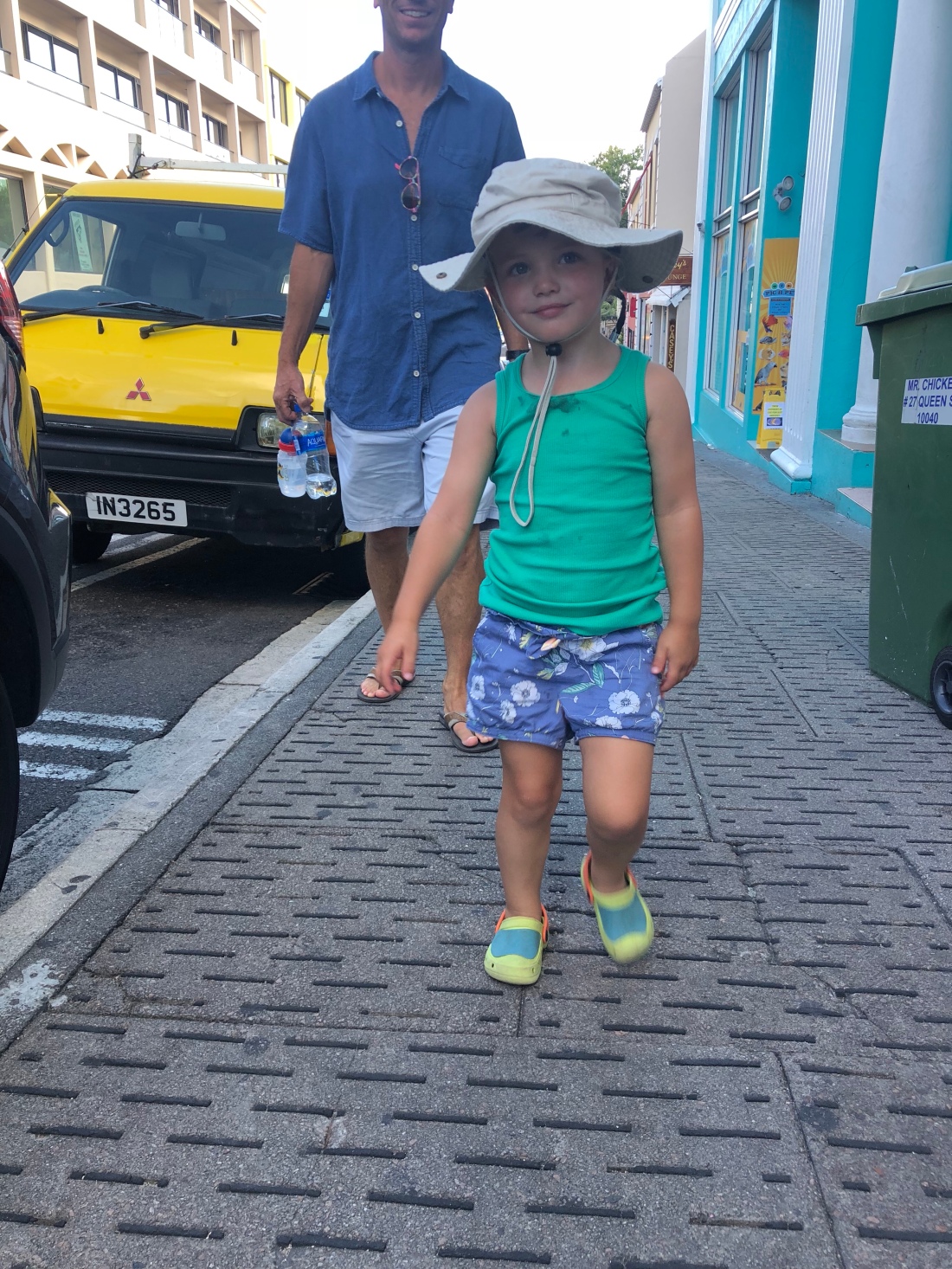 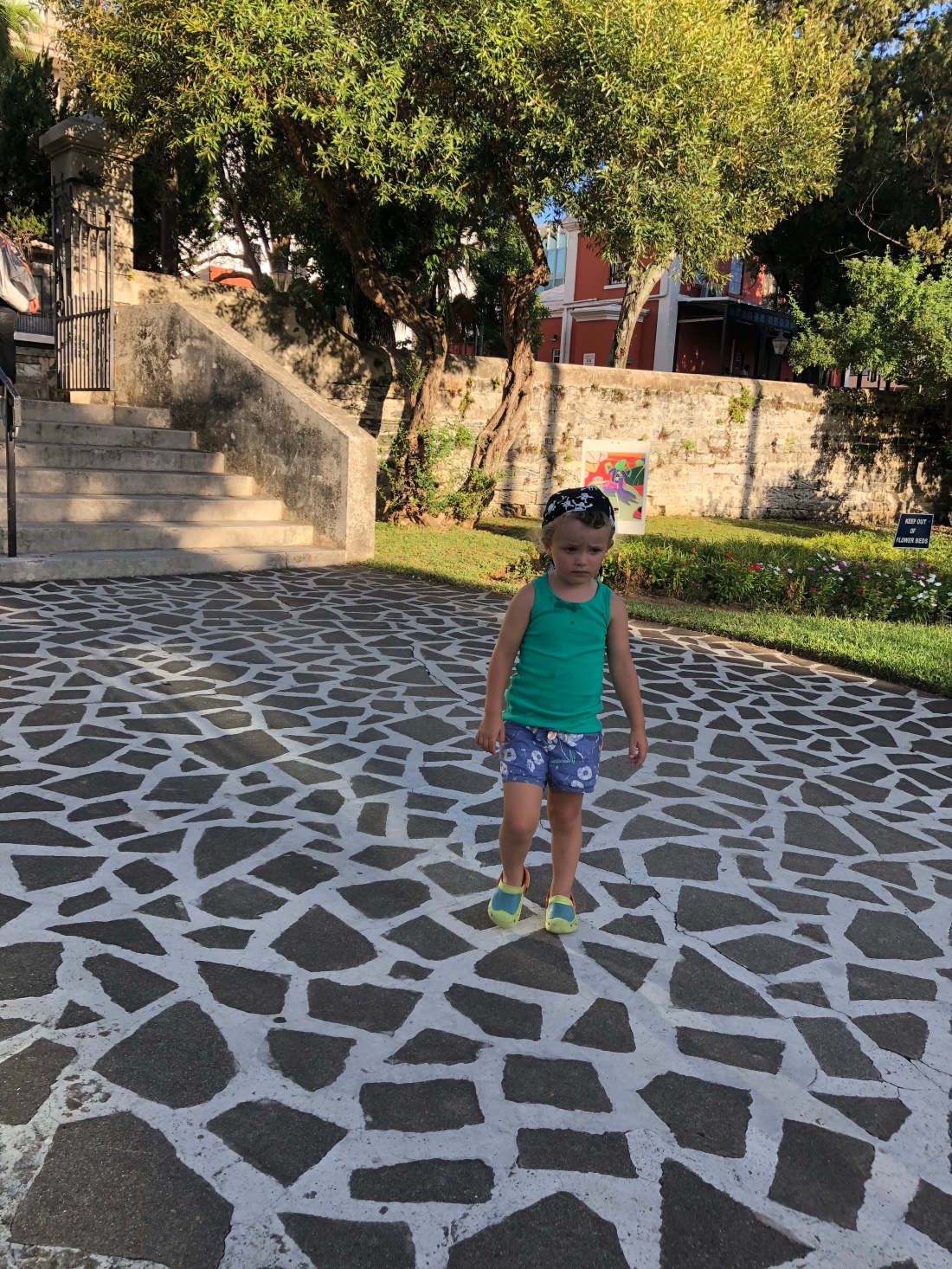 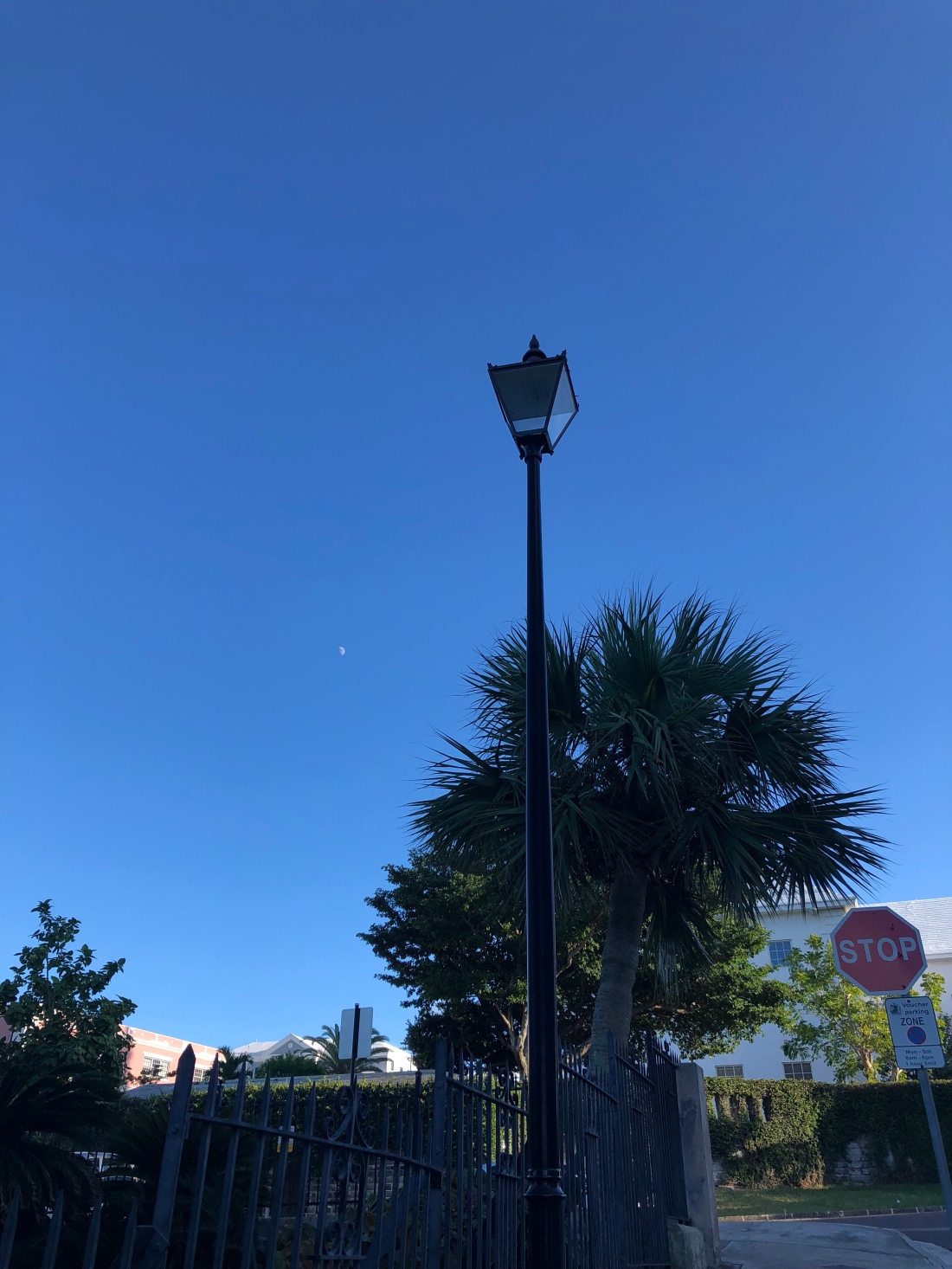 Her feet were a bit sweaty and sore by now, so Ian gave her a shoulder ride up to the car park where we were meeting Jules and Somers and, still wearing her pirate hat, ran up to a complete stranger yelling “Argh ha, me hearties…!” much to his great amusement! She was thrilled to see Somers and they chatted away together quite happily as we made our way towards the restaurant Jules had booked for dinner.

It was a brilliant Italian restaurant where Ryan and Julia are regular visitors and clearly well-liked by the manager, who couldn’t have been more charming and friendly. I had a cocktail, then some wine and a pudding, and was completely stuffed by the end of it all! I probably shouldn’t have munched so much garlic and rosemary flatbread while waiting for our main course to arrive…. I had a chicken coconut curry but in hindsight, I probably should’ve gone for something more Italian. It was nice enough but not nearly as delicious as Ian’s seafood spaghetti or Cornelia’s lasagne. Fluvio, the manager, couldn’t believe she had eaten the whole bowl! For dessert, I had the tiramisu, Ian had sticky toffee pudding (yum) and Cornelia had Eton Mess (she wasn’t allowed chocolate ice cream twice in one day!) and again, she ate the lot! 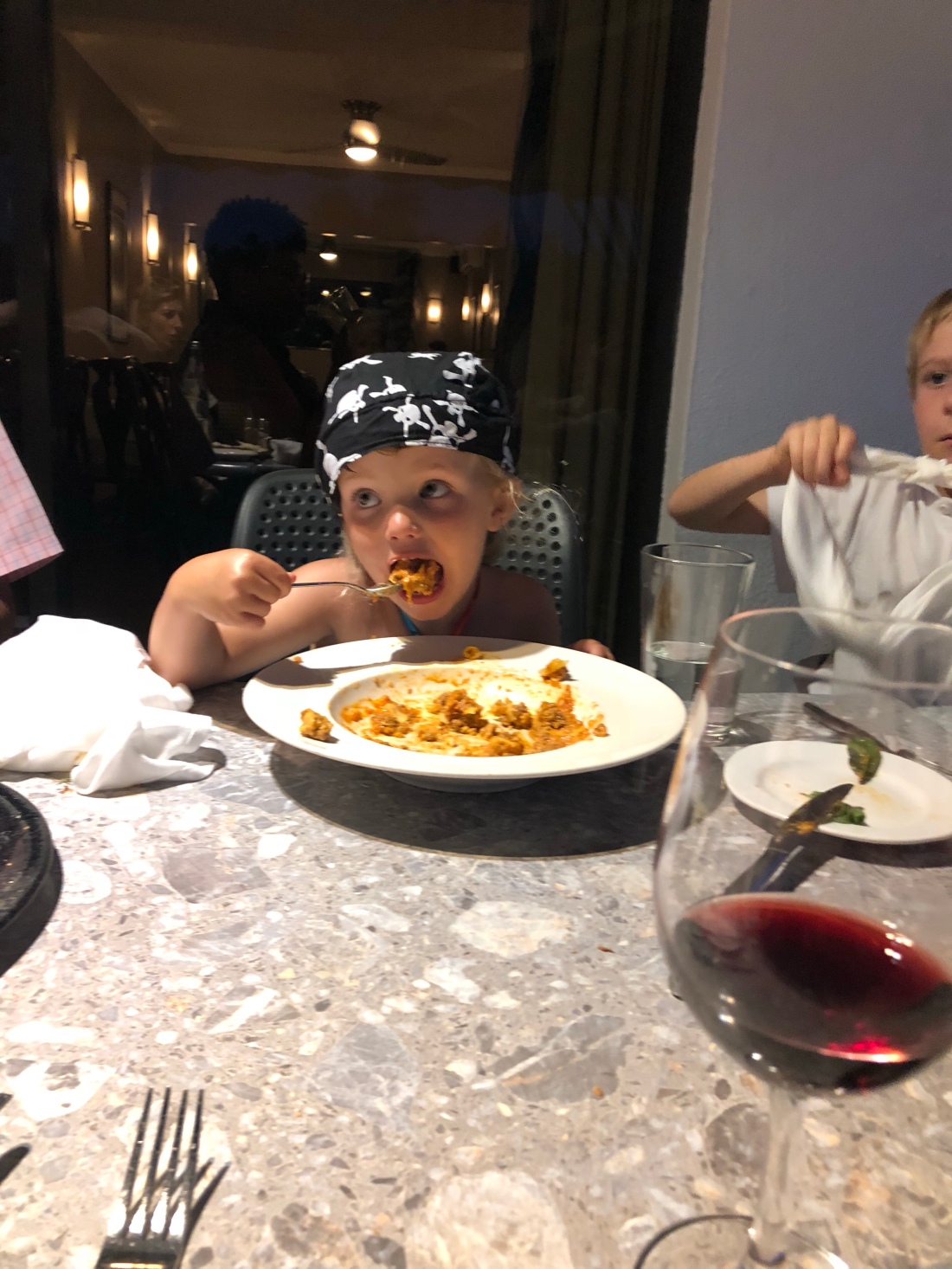 She continued to adore Somers and they played pirates all through dinner, before telling some jokes to each other, which had us all in stitches, largely because they weren’t really jokes…! Hilarious! Then, out of the blue, Cornelia asked Somers if she could hold his hand, which he gave to her. Oh, it was so sweet! 😍 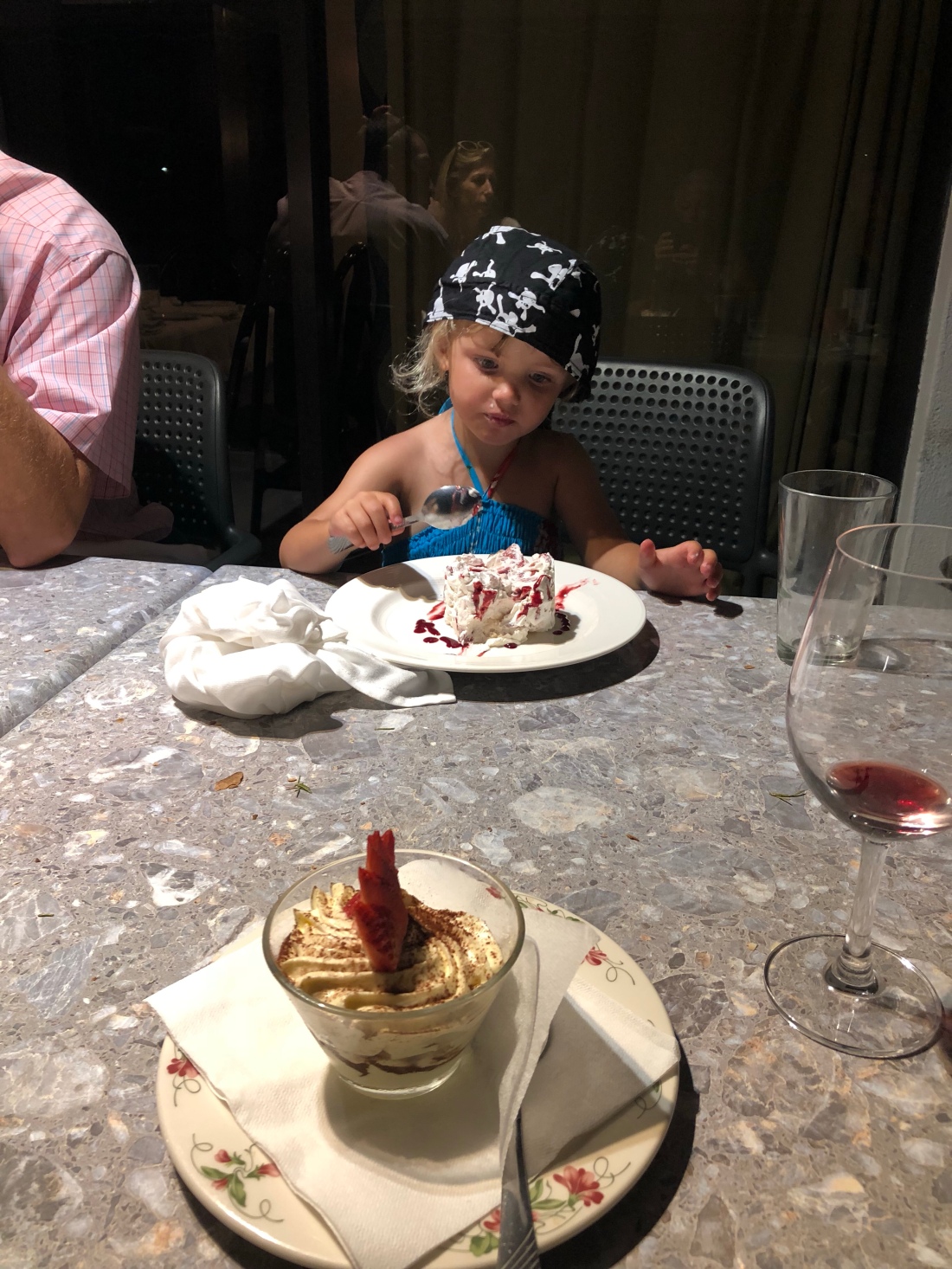 Eventually it was time to head home. Ryan had had a really long day at the office and needed sleep, but we all ended up chatting for a surprisingly long time. Whoops! Cornelia had gone to sleep straightaway, and using the iSitter app, we were able to leave her in the apartment (secured, I should add) and watch her via Ian’s phone, which was connected to mine – just like a baby monitor. It is the first time (apart from our night out in Portland) that we have been able to have an evening with other adults, and it was so great being able to have a proper catch up with Jules after all these years!

One thought on “What’s a pirate’s favourite letter?”