What pure bliss a comfortable bed and a long sleep was! Cornelia slept for over 13 hours (she obviously really needed it). But despite the incredible sleep, she was a complete monster this morning. Everything was hard work. She didn’t want to put her clothes on, she didn’t want to brush her teeth, she refused to put on her shoes etc. Argh! She struck out at Ian, so lost her Kindle for the day, which further enraged her, and we wasted the entire morning dealing with it all. Everything just takes so much longer when you have a grumpy four year old, and then a grumpy husband! It was all a bloody pain! To rub salt in the wound, the dishwasher leaked all over the kitchen floor, drenching her socks and leggings (she discovered the leak!). I texted Annie to let her know about it, as well as the loo that kept filling after it had been flushed, but heard nothing back from her. 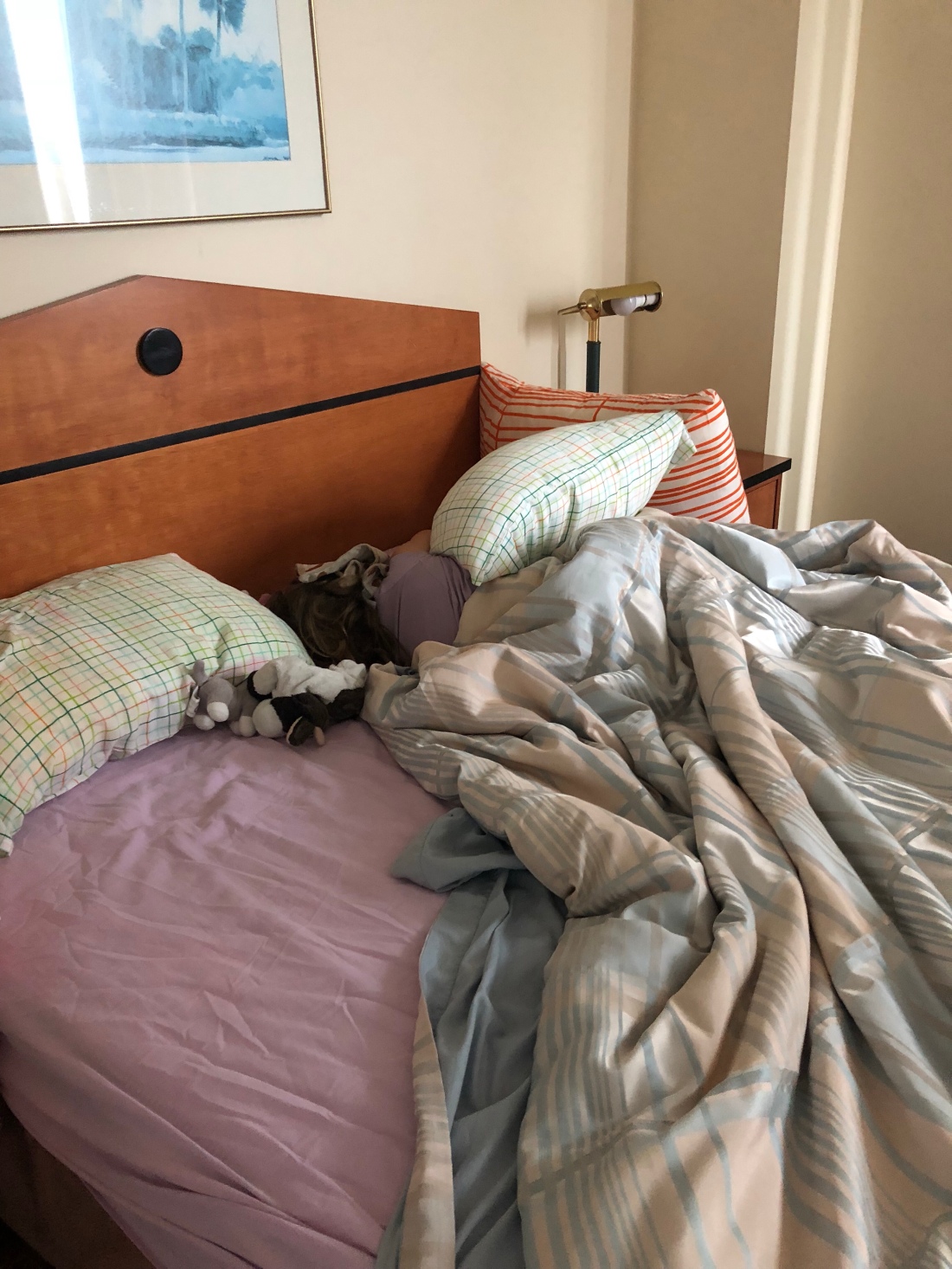 At last, we left the flat and set off on foot for for the Metro, about 1km away. It was raining a bit, and I think for the first time since we’ve been in the States and Canada, we needed our raincoats! We bought our tickets and boarded easily, taking the line all the way down to Downtown Vancouver, and from there we walked to the much-recommended Stanley Park. On the way, we stopped off at HSBC to admire the enormous pendulum swinging from the ceiling and the skyscrapers that rose at an angle, so that the higher you were, the bigger your balcony! Also, many of the tower blocks seemed to be landscaped with water features, like moats, around the frontage. Vancouver has apparently been voted the fourth best city in the world to live, based on a number of factors. We found the city to be busy without being overcrowded, friendly without invasive insincerity, and how wonderful to be able to get from the commercial district and high rises to the waterfront in five minutes. We could easily understand how it scored so highly. Interestingly, Honolulu came first, followed by Vienna and Melbourne. 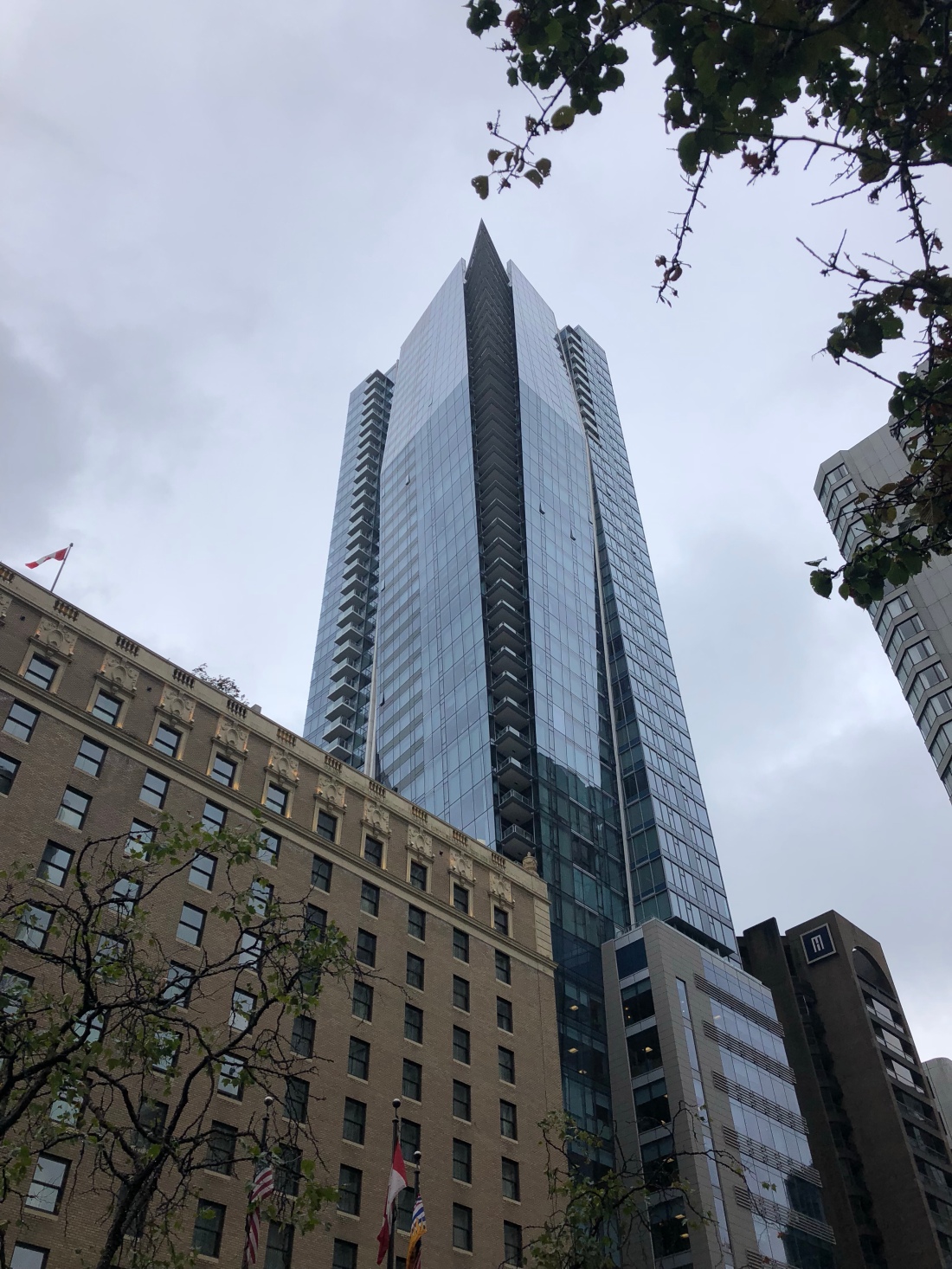 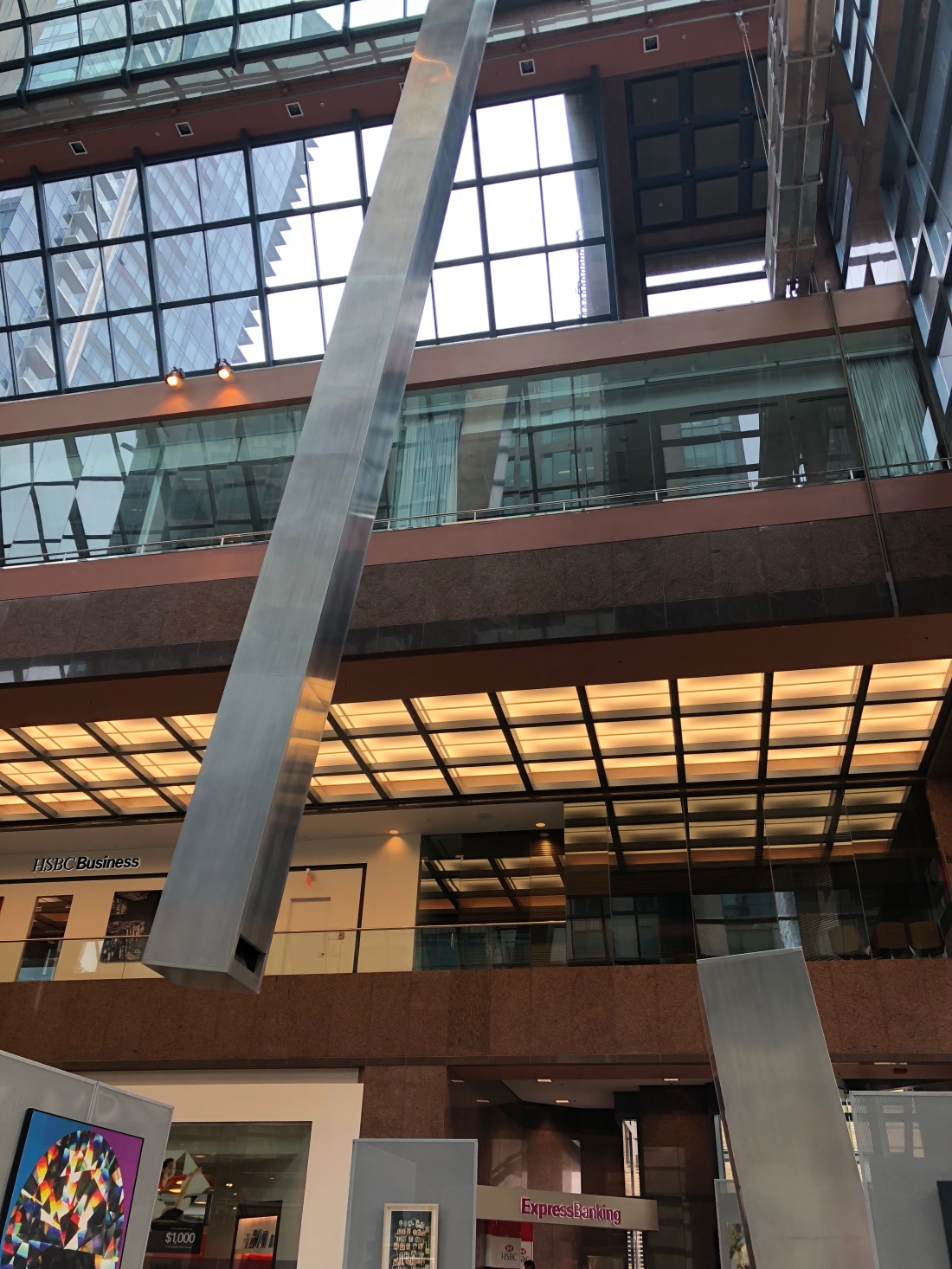 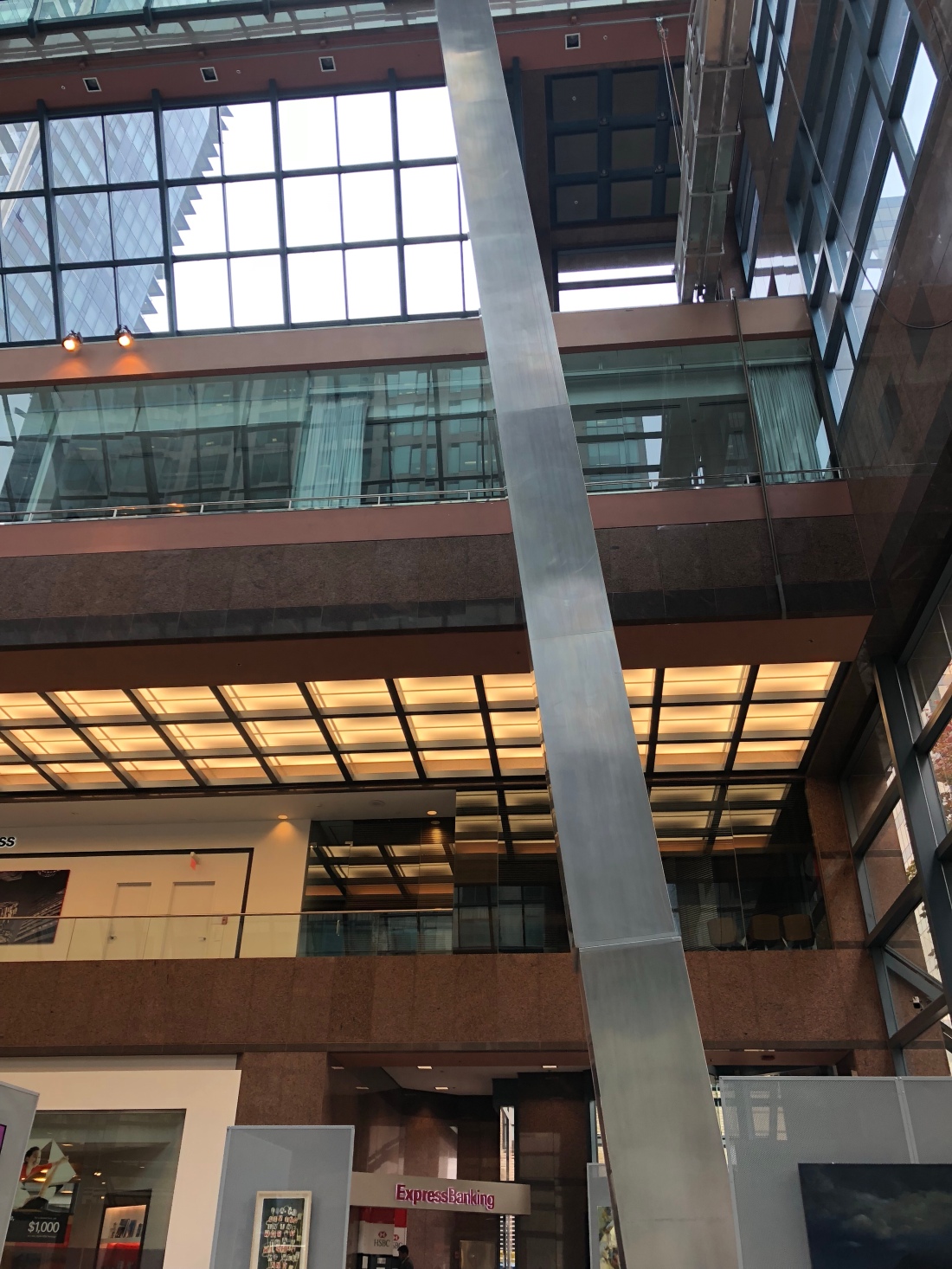 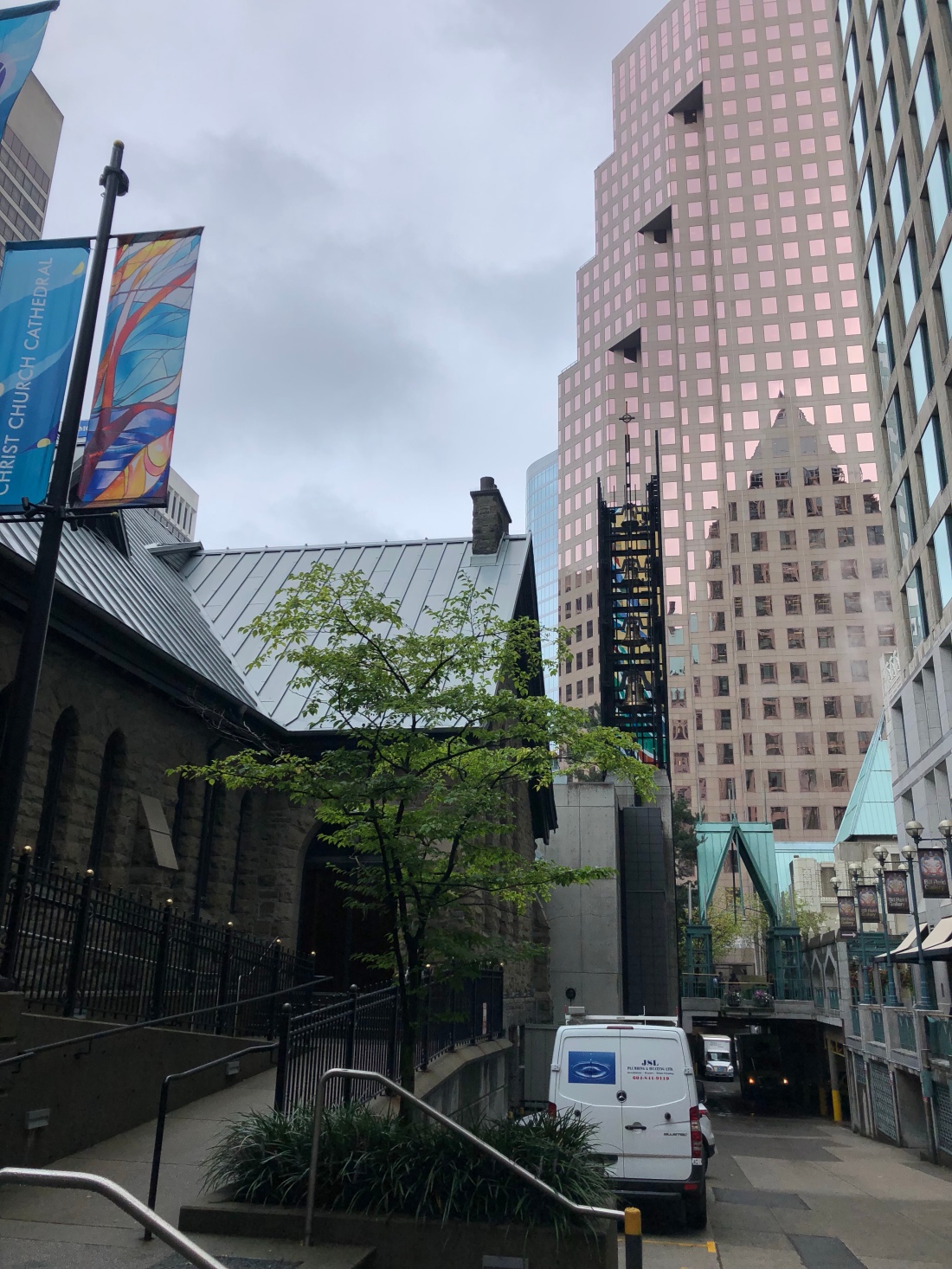 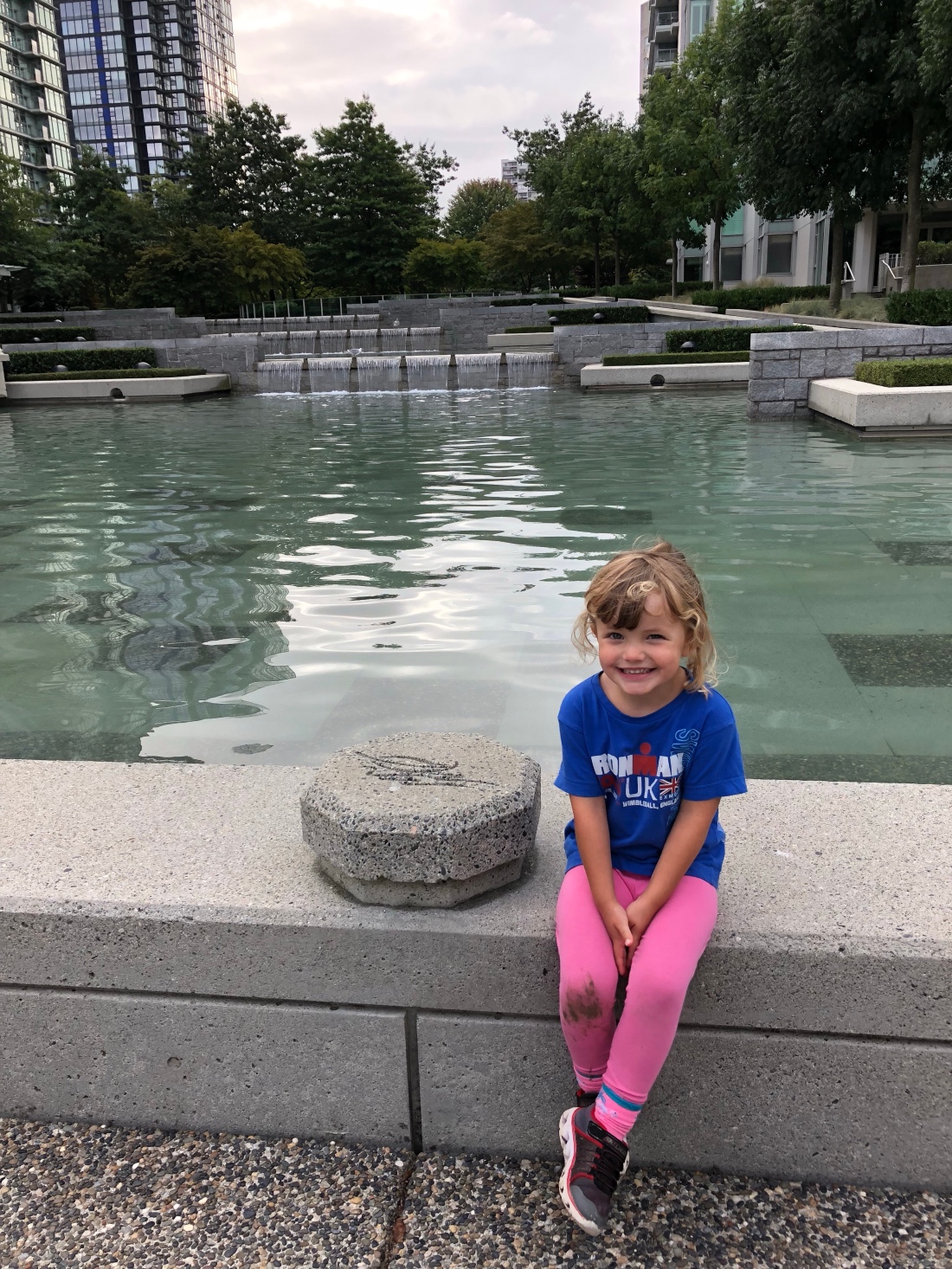 Having wasted the morning, it was 13:30 before we were near Stanley Park and as we passed a White Spot restaurant, decided to drop in there for lunch. It was a good choice! Cornelia had chicken strips (served in a card pirate boat!) and grapes, Ian went for the burger, and I had crunchy Asian salad, all of which was delicious, with a friendly and competent waitress and all reasonably priced. Cornelia is now being timed for her meals – she has thirty minutes from her food arriving (whether at home or in a restaurant/diner) to finish her meal. If she doesn’t manage it, there is no dessert (if that is an option) and no snacks in between that meal and the next. It worked a treat today! She was munching her way through her food very slowly, until she realised that she only had five minutes left, then gobbled the rest down in no time at all! Hurrah! It’s a much better way to deal with it, than just getting cross with her for eating slowly, especially on days like today when her unreasonable temper is quick to flare up. 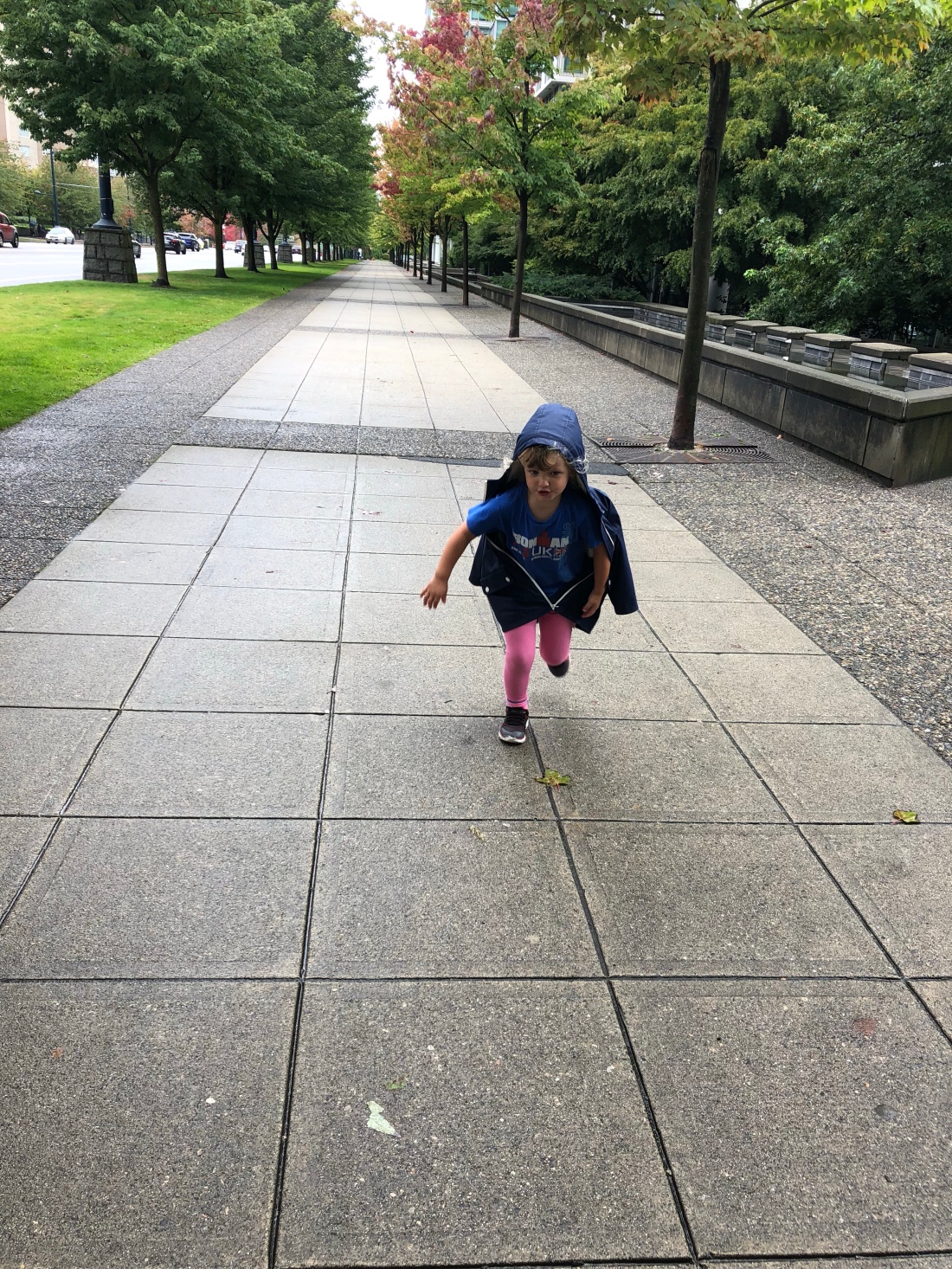 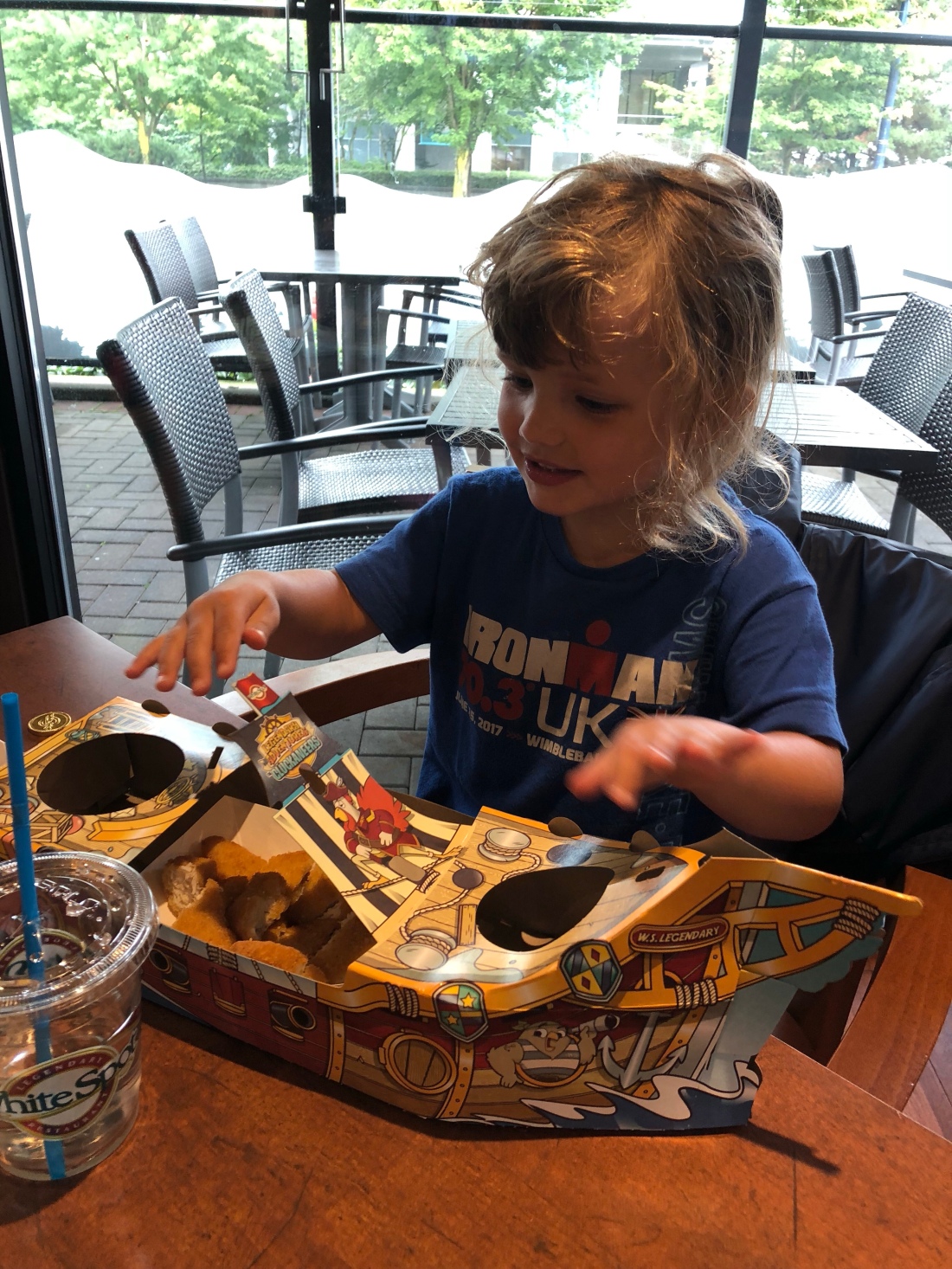 With full tummies, we walked the final few hundred metres to the fabulous Stanley Park and almost instantly, we knew that we would regret not having been better at getting out of the apartment this morning. There is so much to see and to do and we barely had time to scratch the surface.

We went straight to a playground and Cornelia and I had a pretend milk machine on the go, filling imaginary bottles, hooking them up to the monkey bars, throwing them down the slides, then storing them safely… I have no idea how she came up with a milk machine, but I was more than happy to go along with it! She also played with her imaginary friends, Ellie, Asta and George, pretending they were all on a school trip together. I love her imagination! When we left the playground, we had been hoping to take the free shuttle bus that we’d seen advertised on the information boards around the park, but when we asked at the visitor kiosk, we were told that they had stopped a few years ago! (They may want to update their information boards!!) 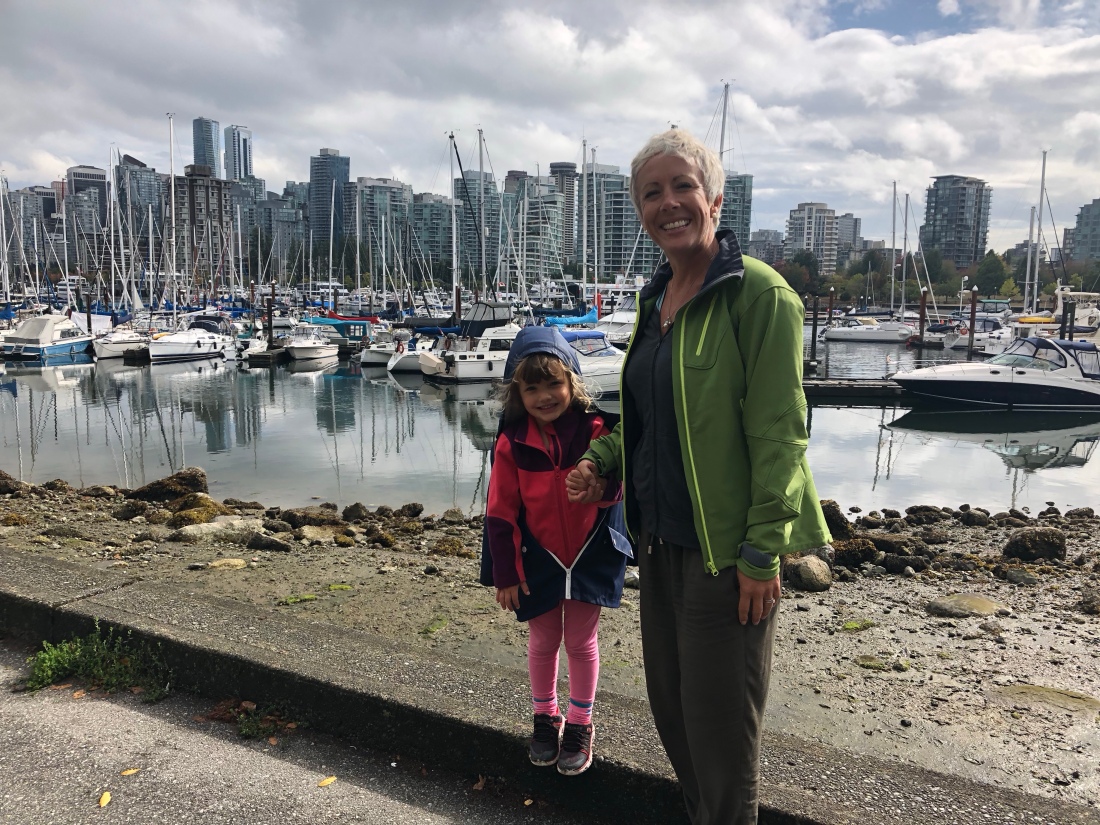 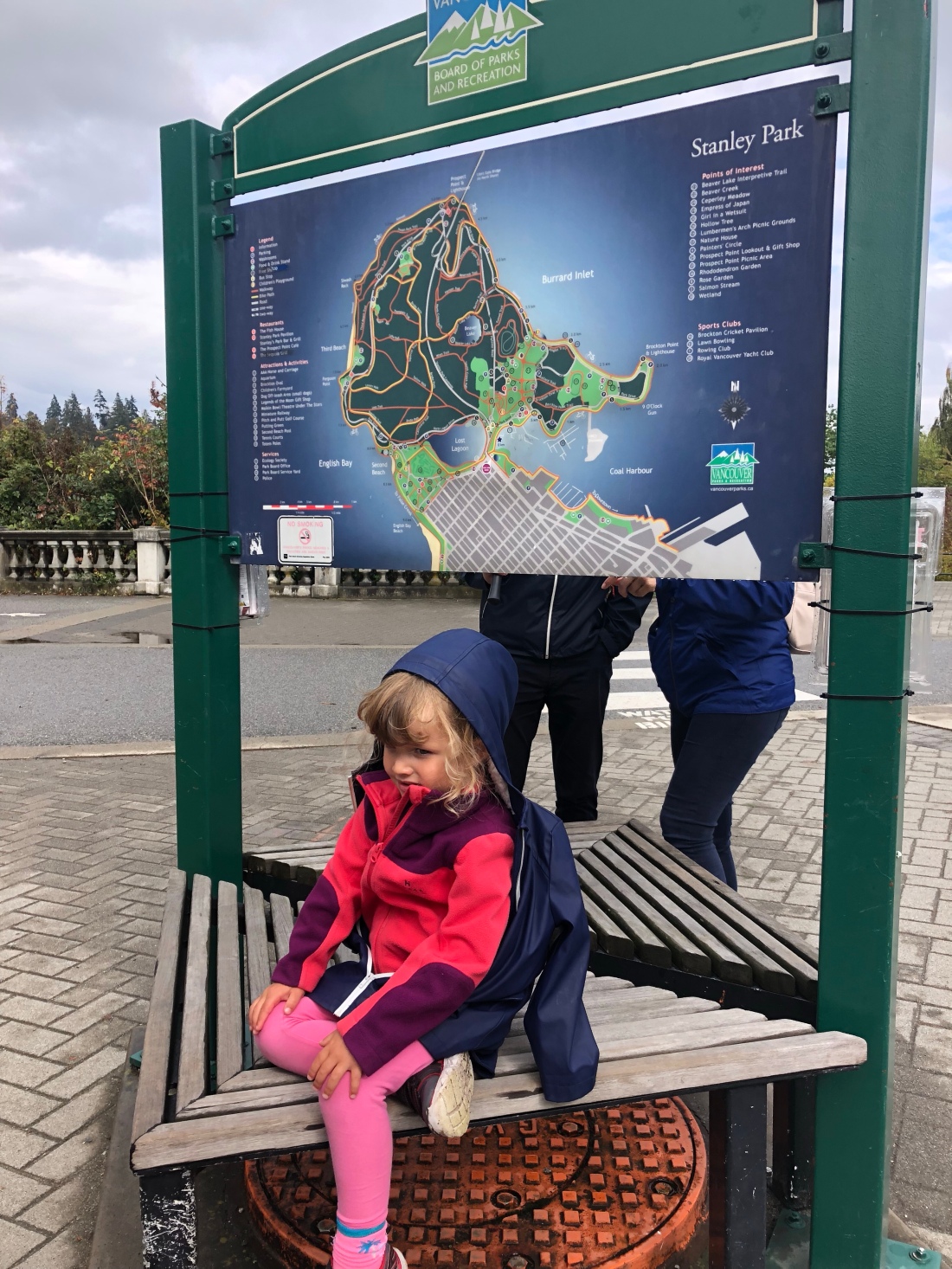 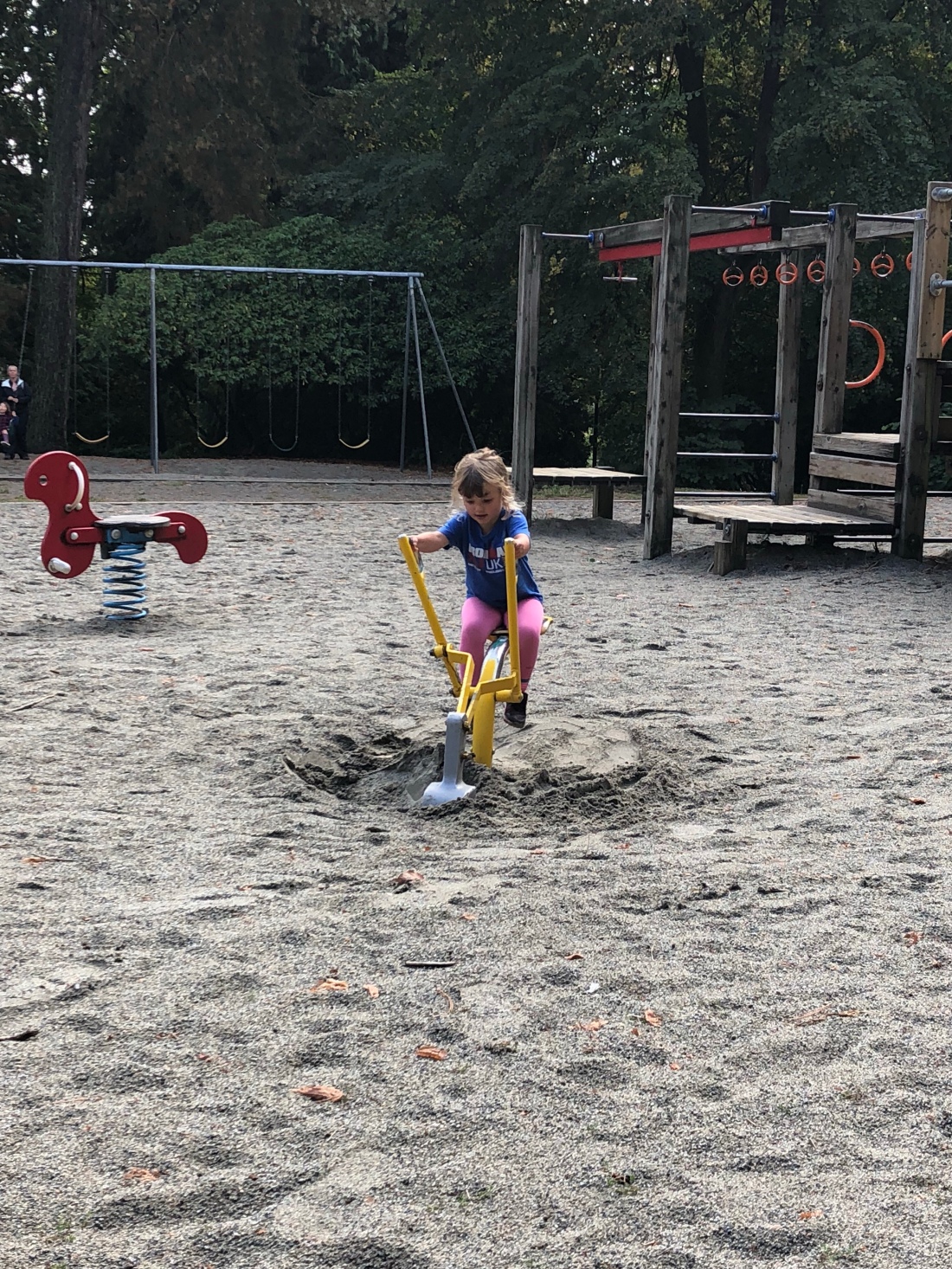 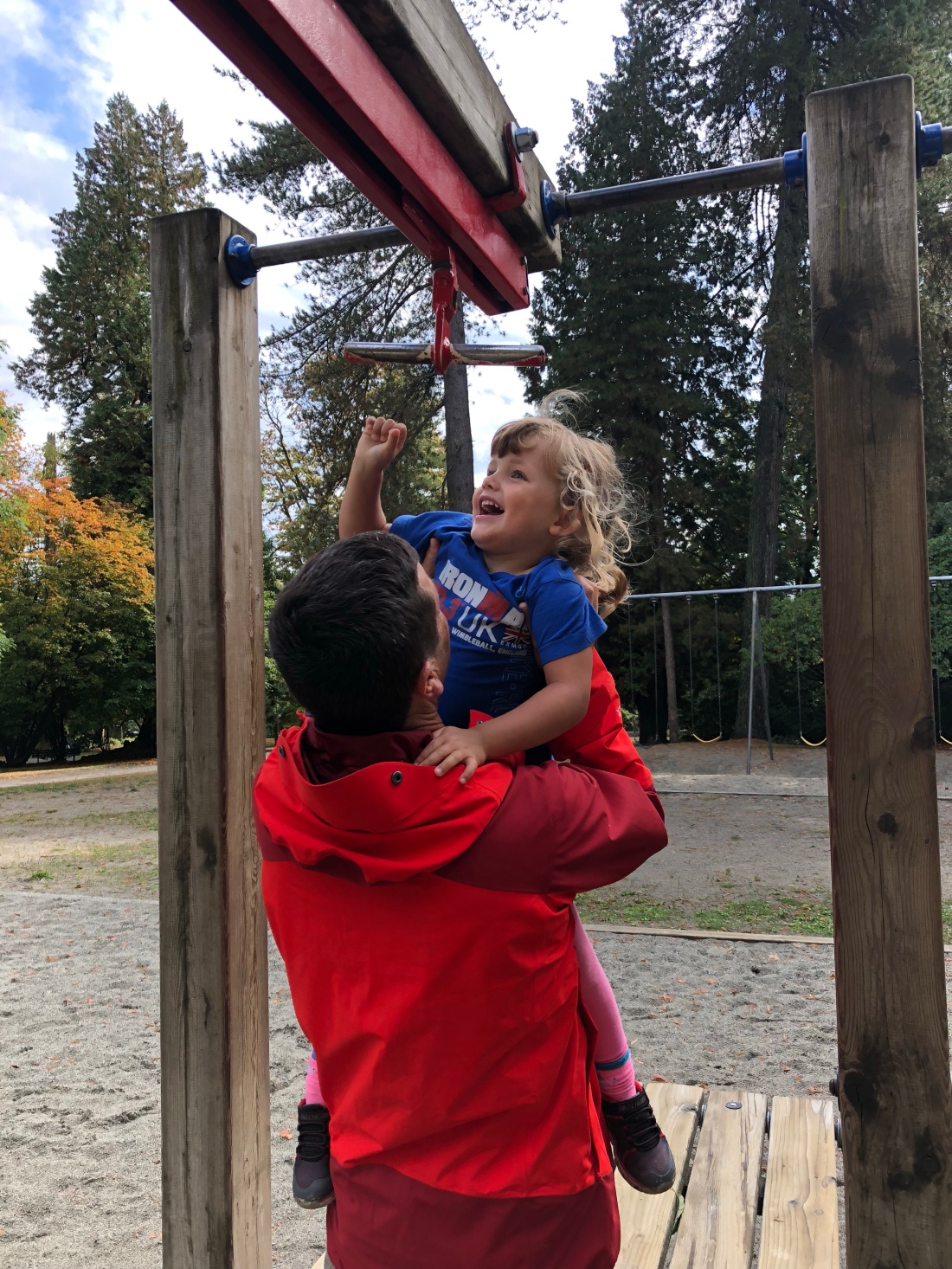 Instead, we walked along the Sea Wall, watching the numerous sea planes take off and land, before diverting inland to see the Gastown Clock which spouts steam and pipes a tune every quarter of an hour. 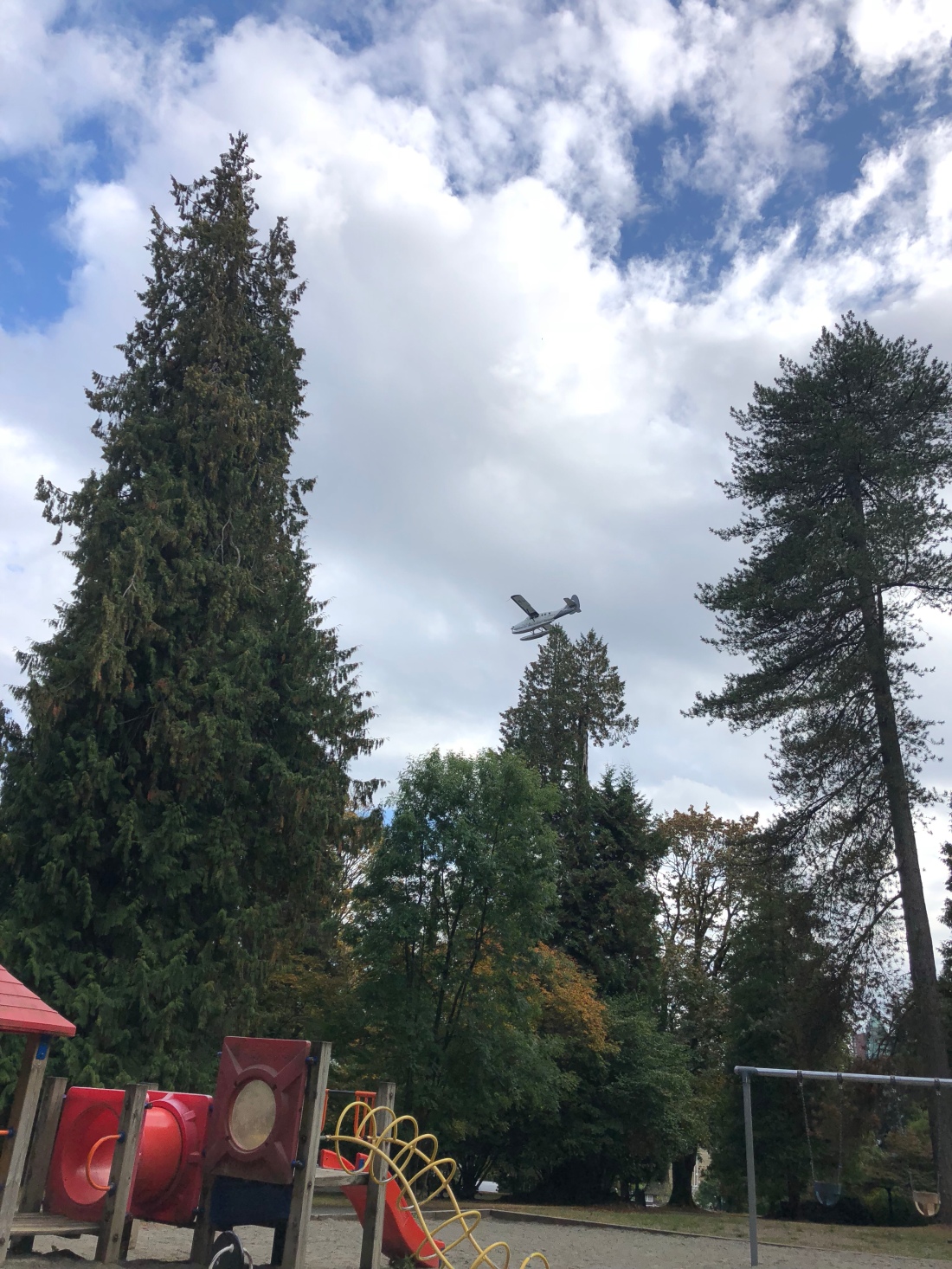 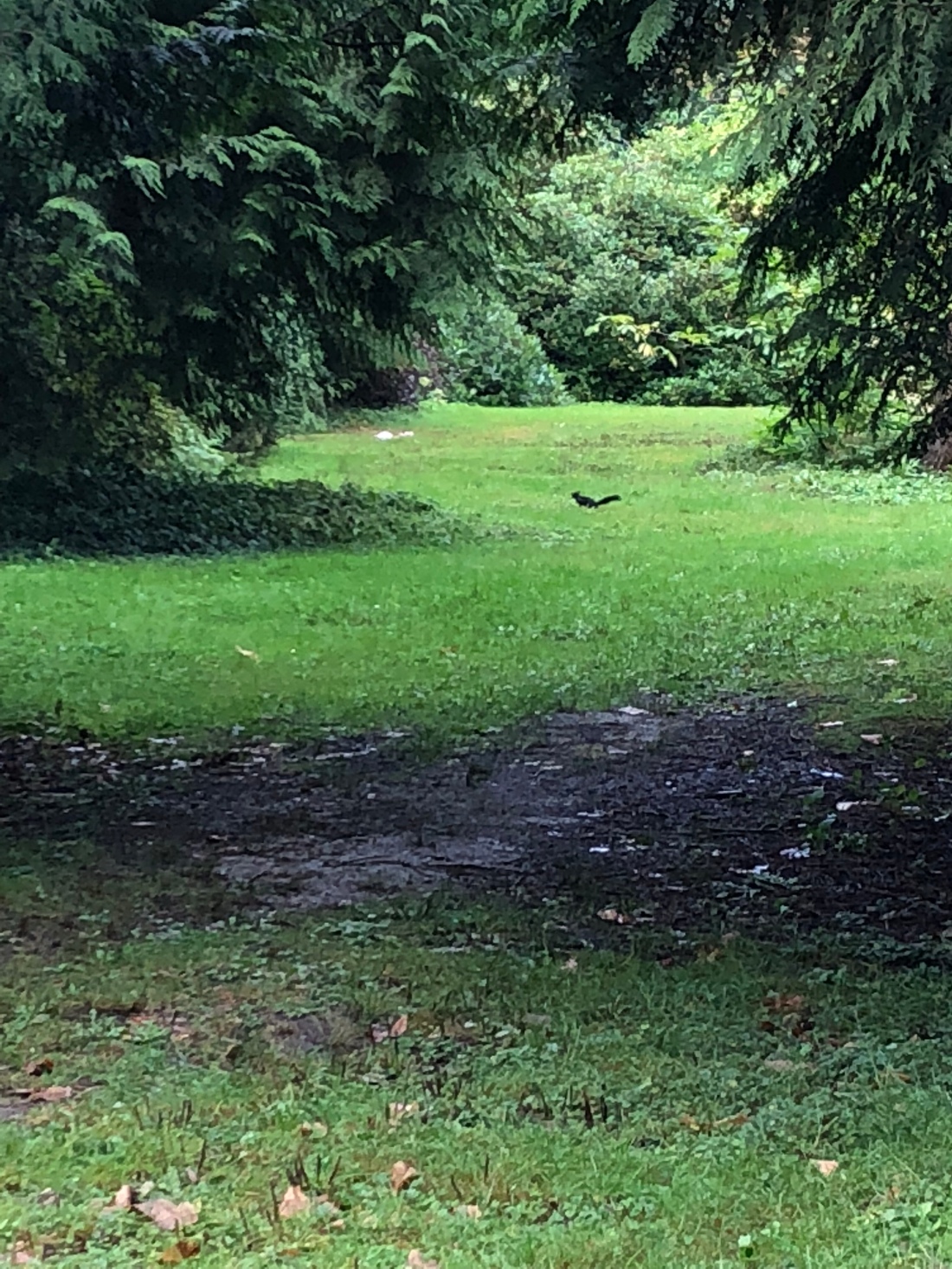 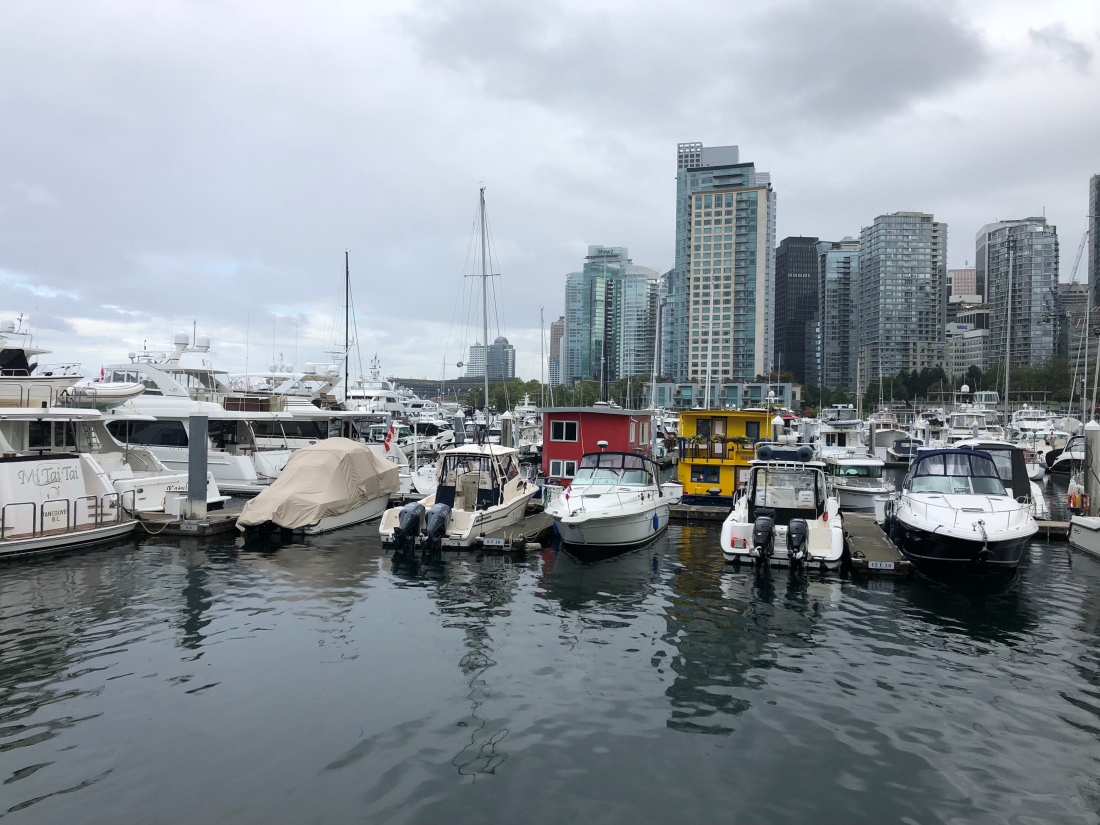 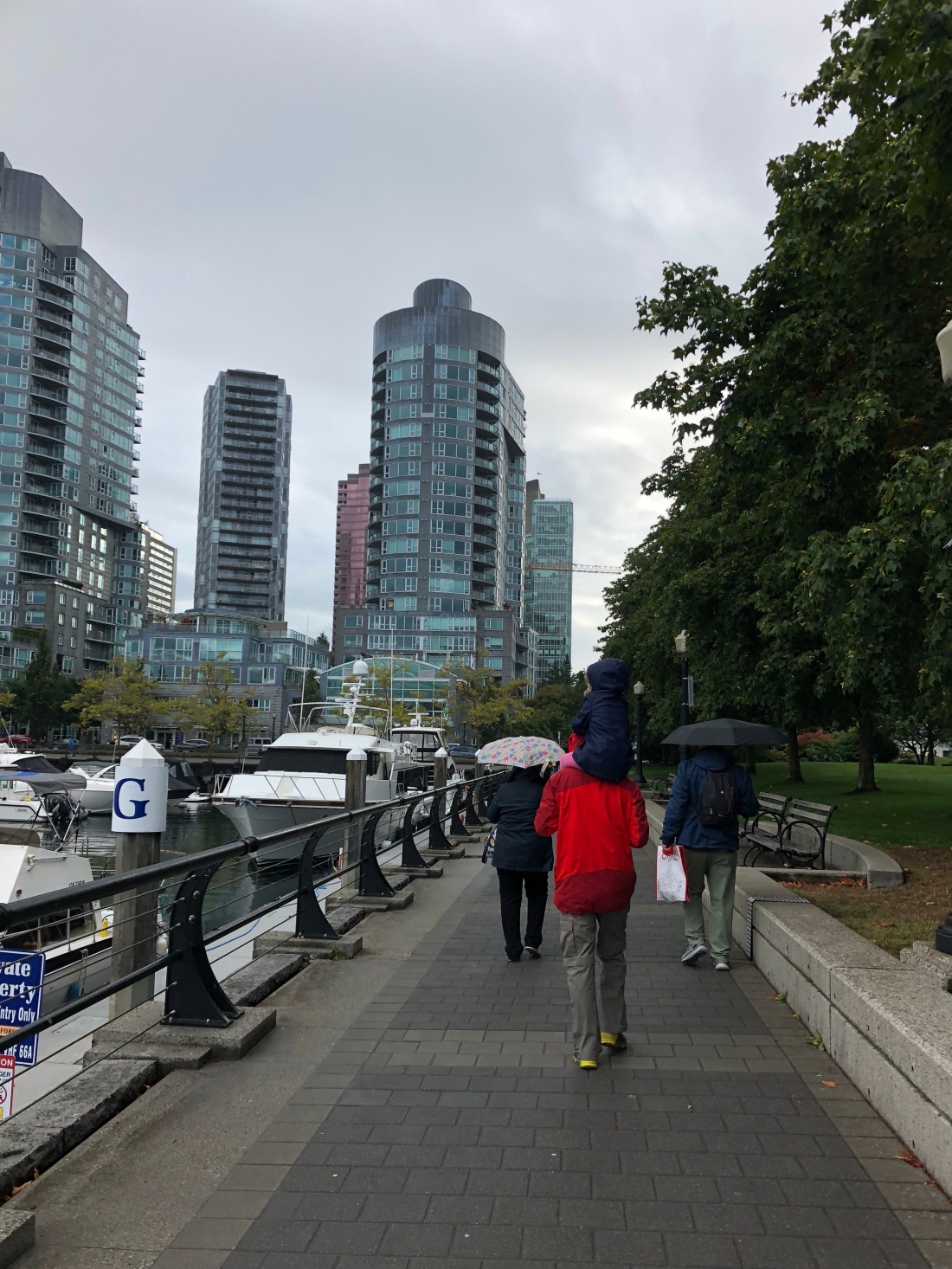 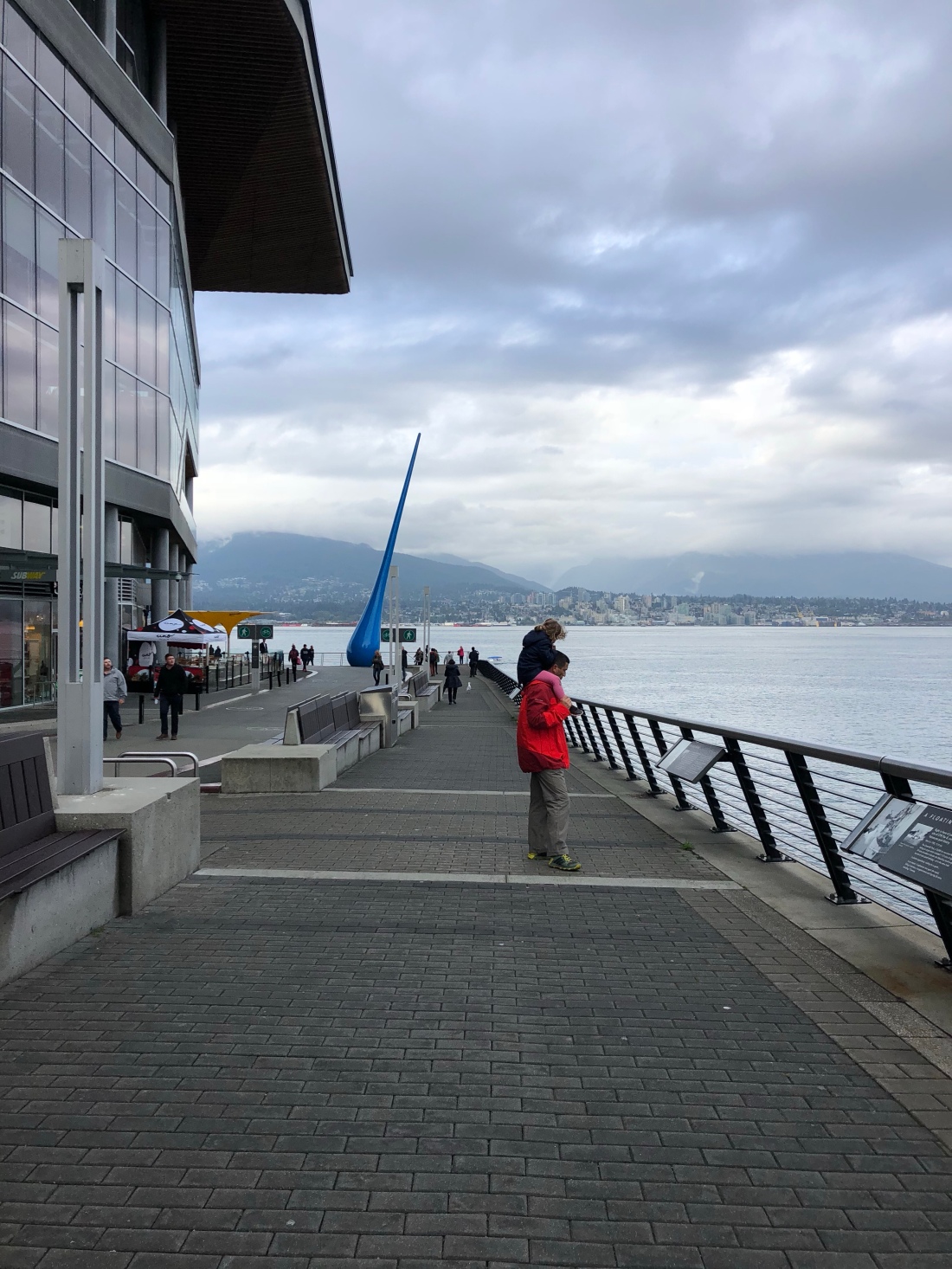 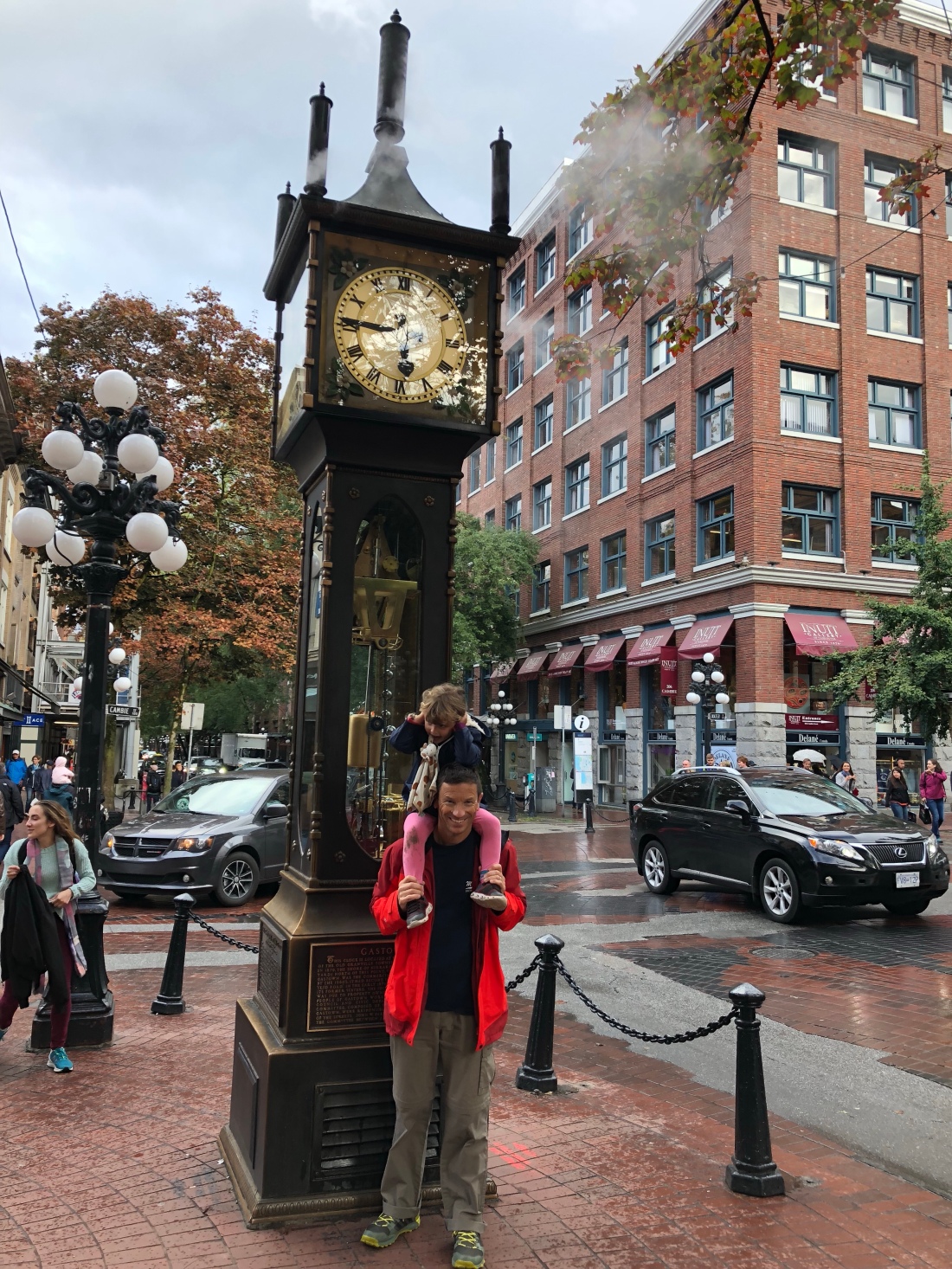 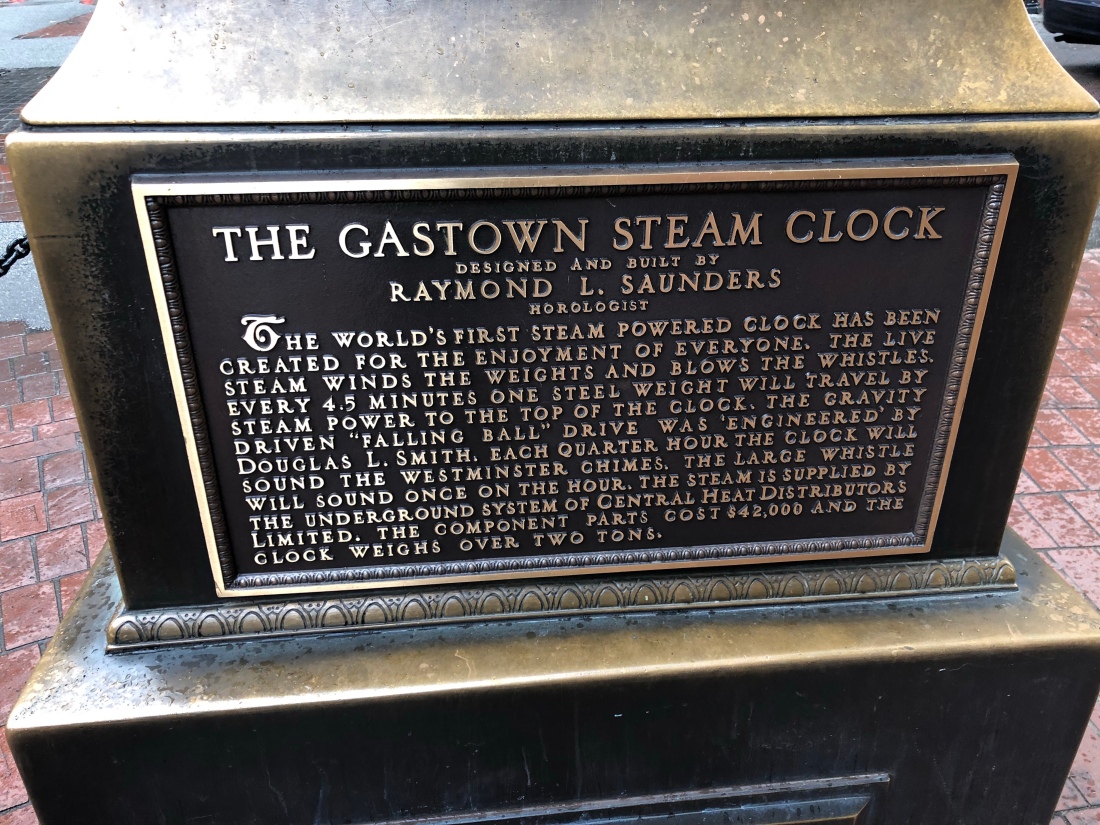 This street was also filled with souvenir shops, so we bought our obligatory British Columbia licence plate and a Canada badge for Bugsy’s rucksack. I’m really going to have to get my sewing up to scratch…!

Before we knew it, it was 18:00 and we were at least an hour away from the apartment and I still needed to get to a supermarket to buy some food for supper tonight. We found a little market nearby and it is my favourite food store so far! It was full of utter healthy deliciousness. It was a shame we were only staying one more night as I’d have happily bought food for a week from there!! 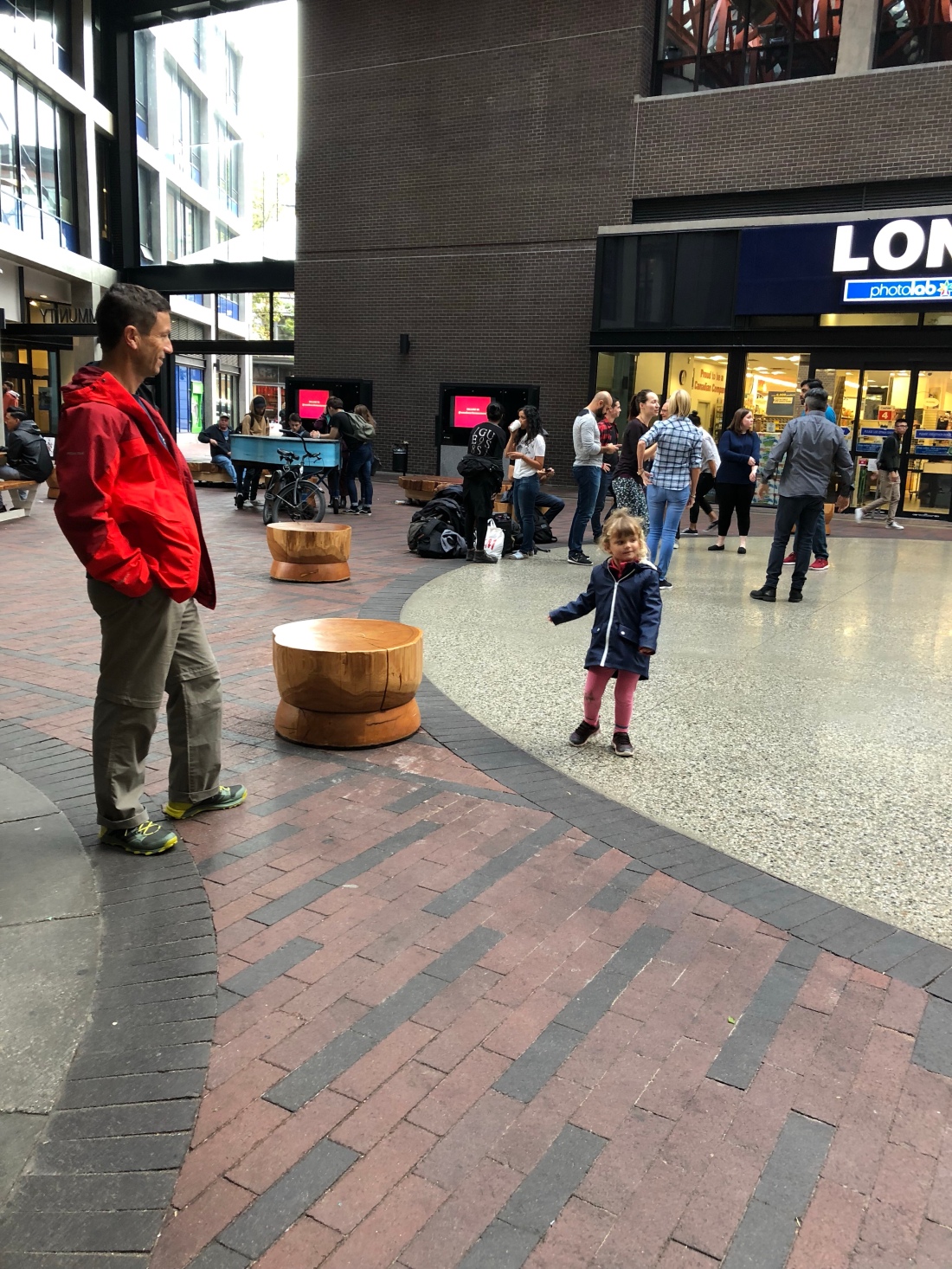 After a loo stop (at Victory Square which, sadly and perhaps ironically, seems to be the local hangout for a lot of homeless people), we finally jumped back on the Metro, arriving at our apartment well after 19:00. I raced to make supper while Ian bathed Cornelia, and we managed to get her in bed and asleep by about 21:00. 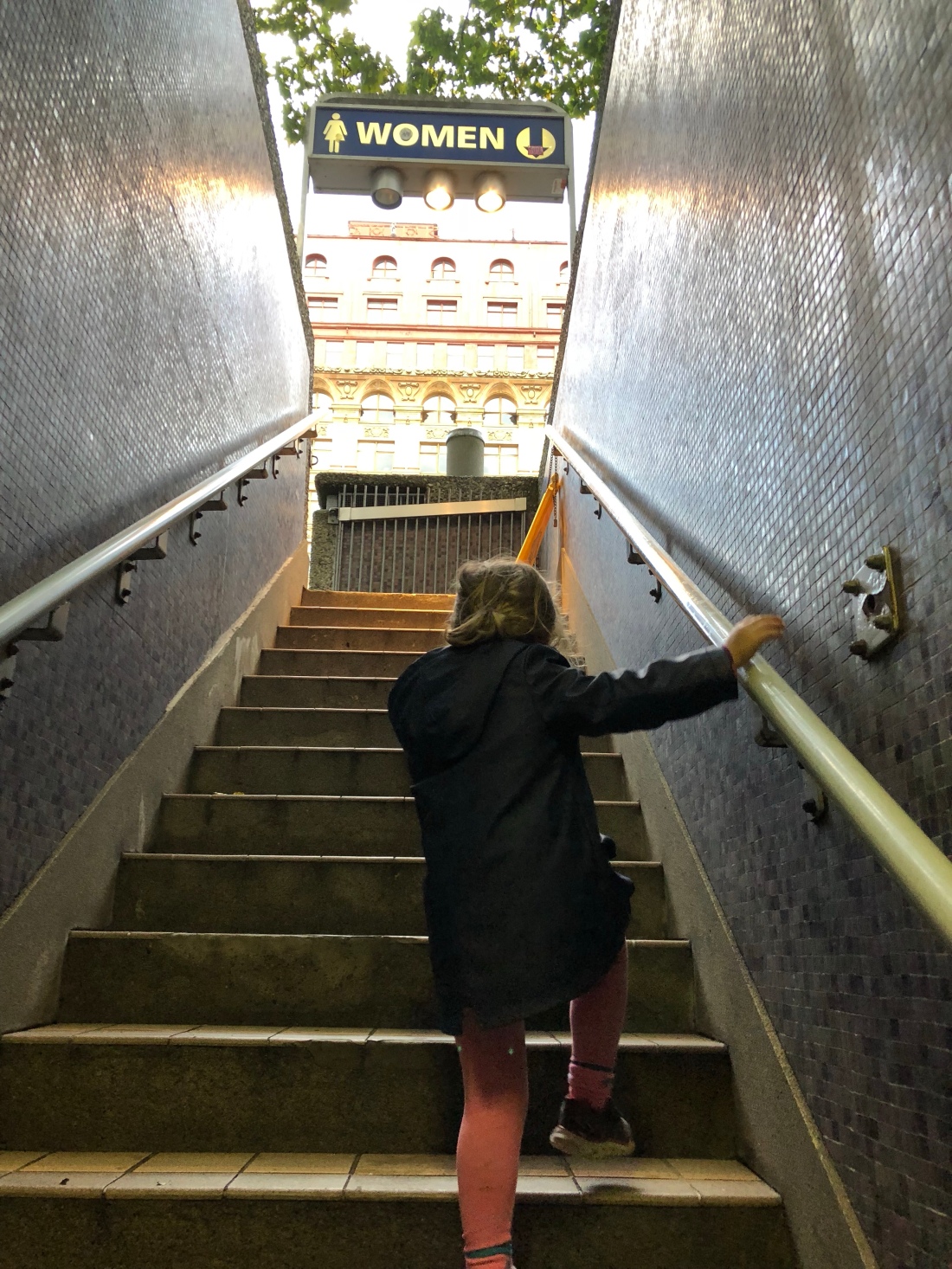 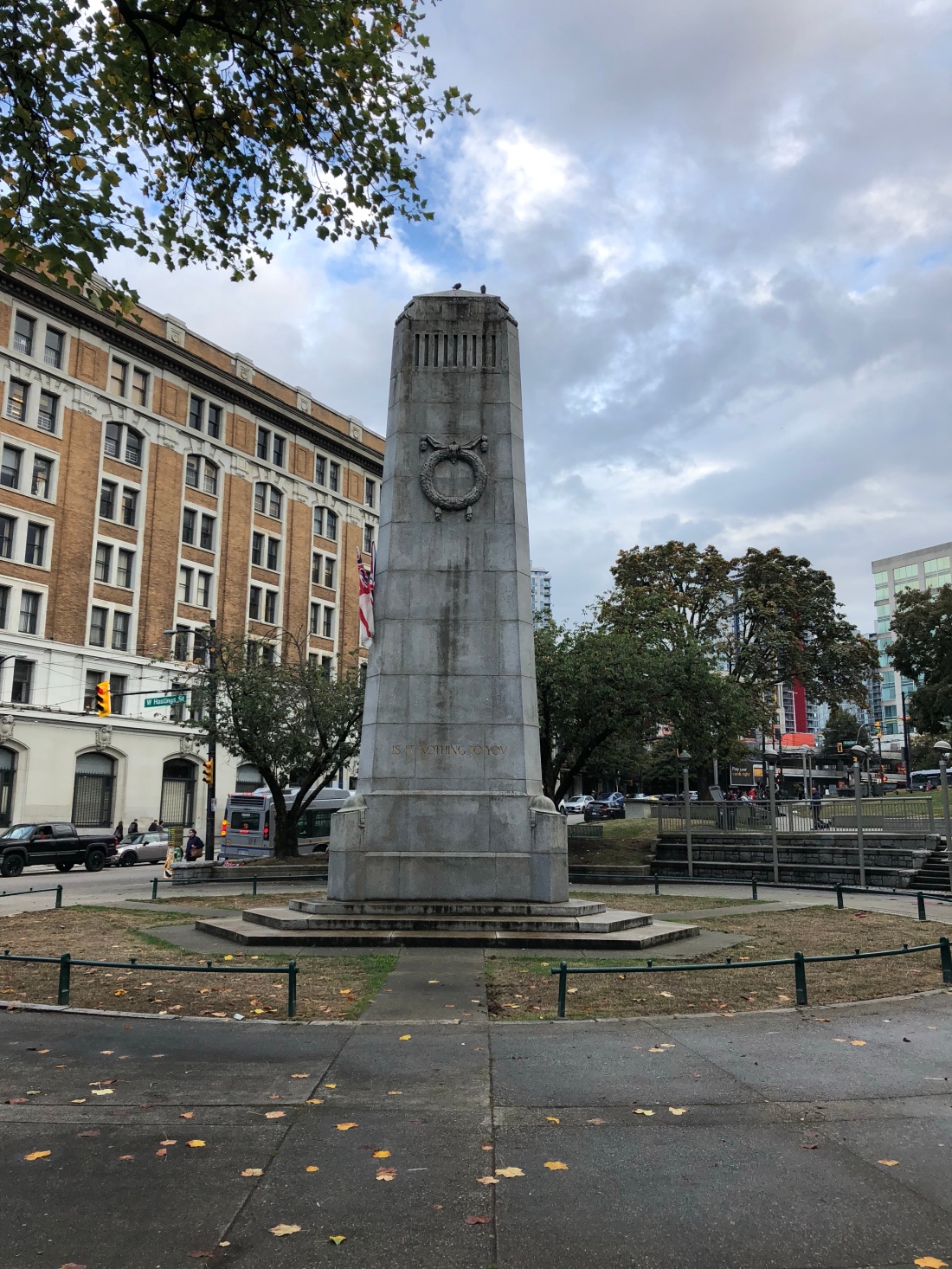 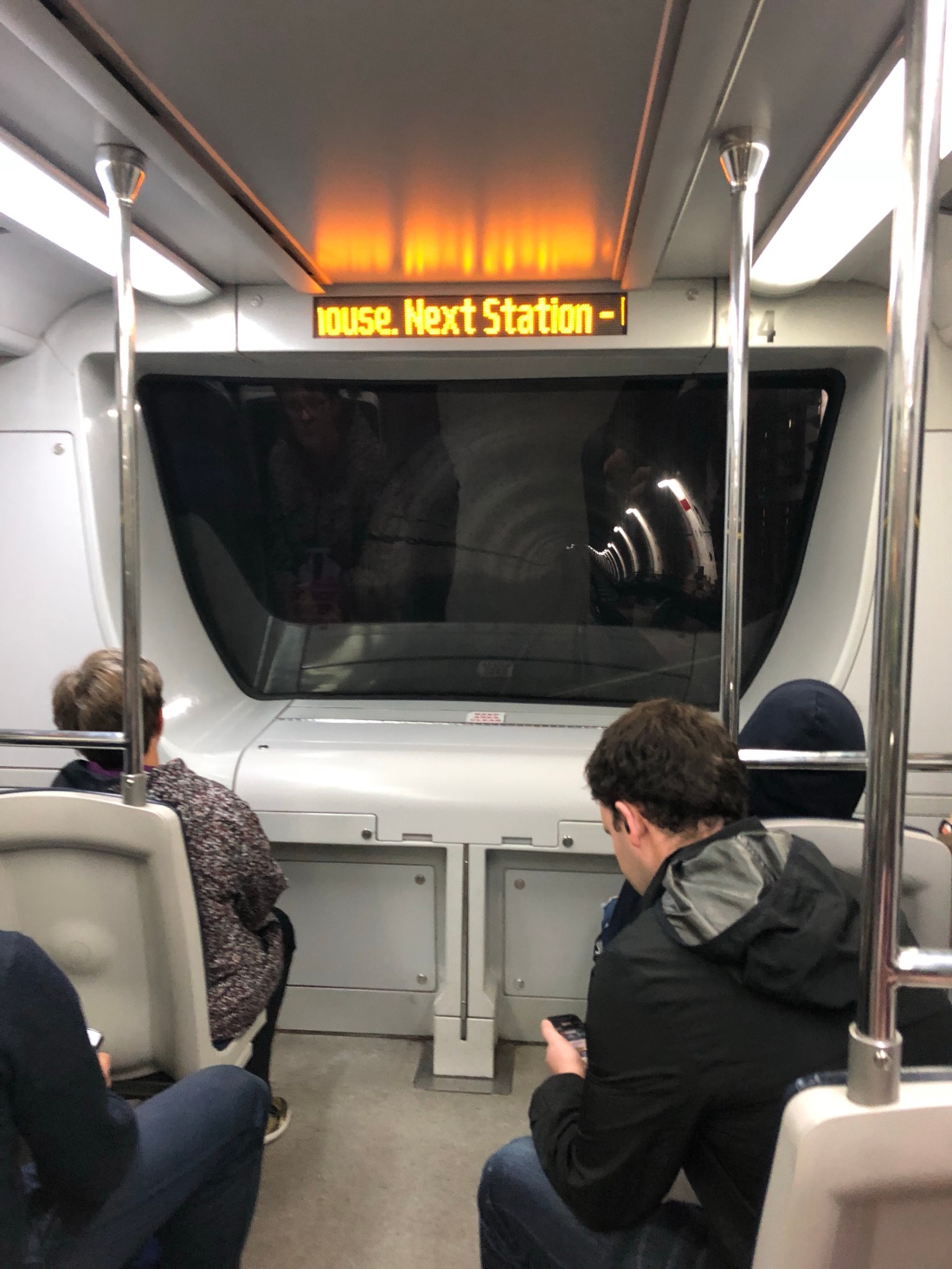 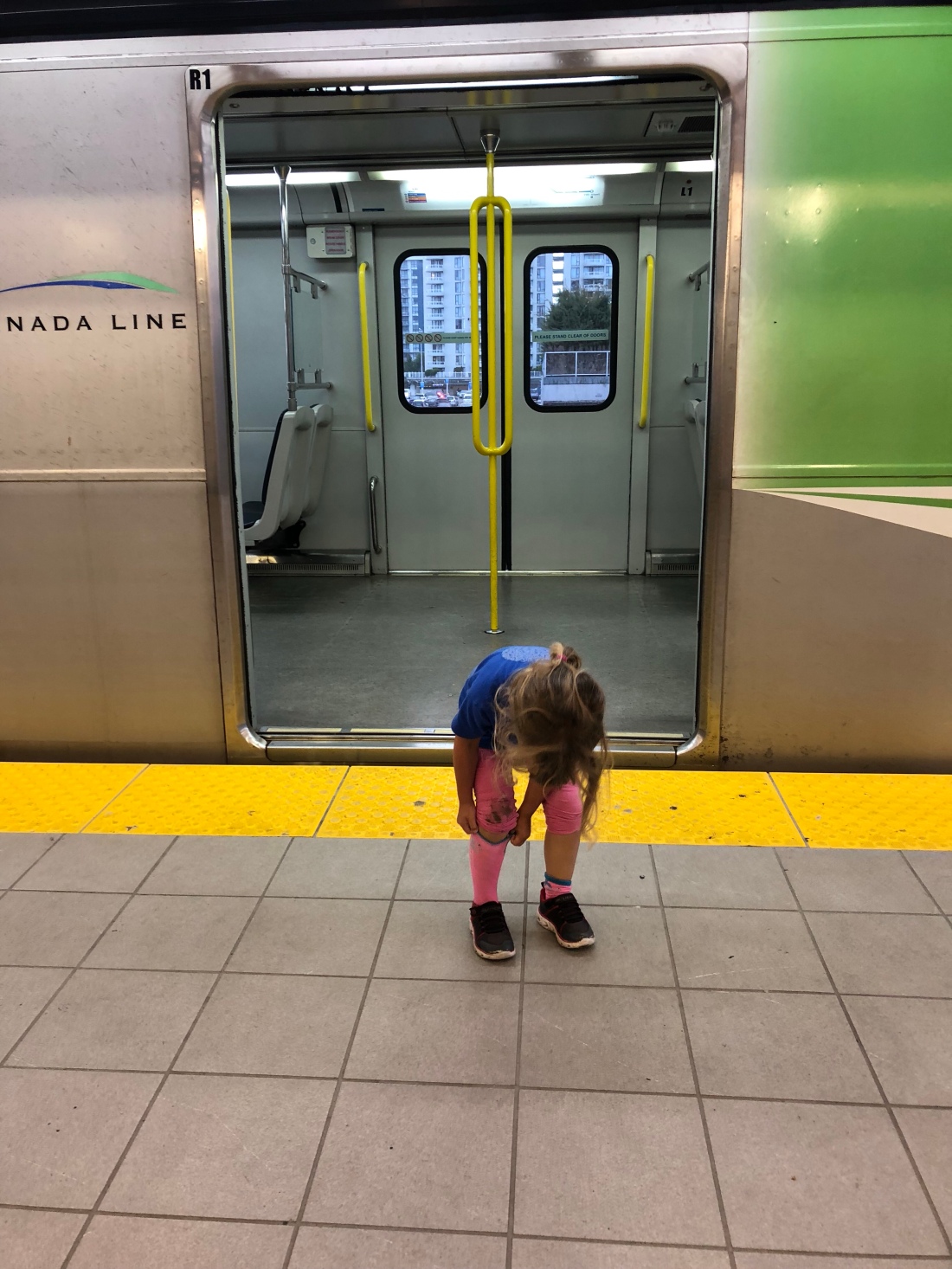 After she was in bed, I packed up as much as I could ready for a post-breakfast departure in the morning. It is a real shame that we are only here for one day, as we didn’t see or do nearly as much as we would’ve liked! Another one for the return visit list!

One thought on “A glimpse of Vancouver”