Oh dear, two sleepless nights in a row! Cornelia, bless her, was terrific on the plane, staying asleep until we had landed, but she was lying half across me, which meant I couldn’t move much for four hours. I tried to doze but there was no way to get comfortable enough, so I stayed awake for most of the flight, enjoying this extra close time with Bugsy. 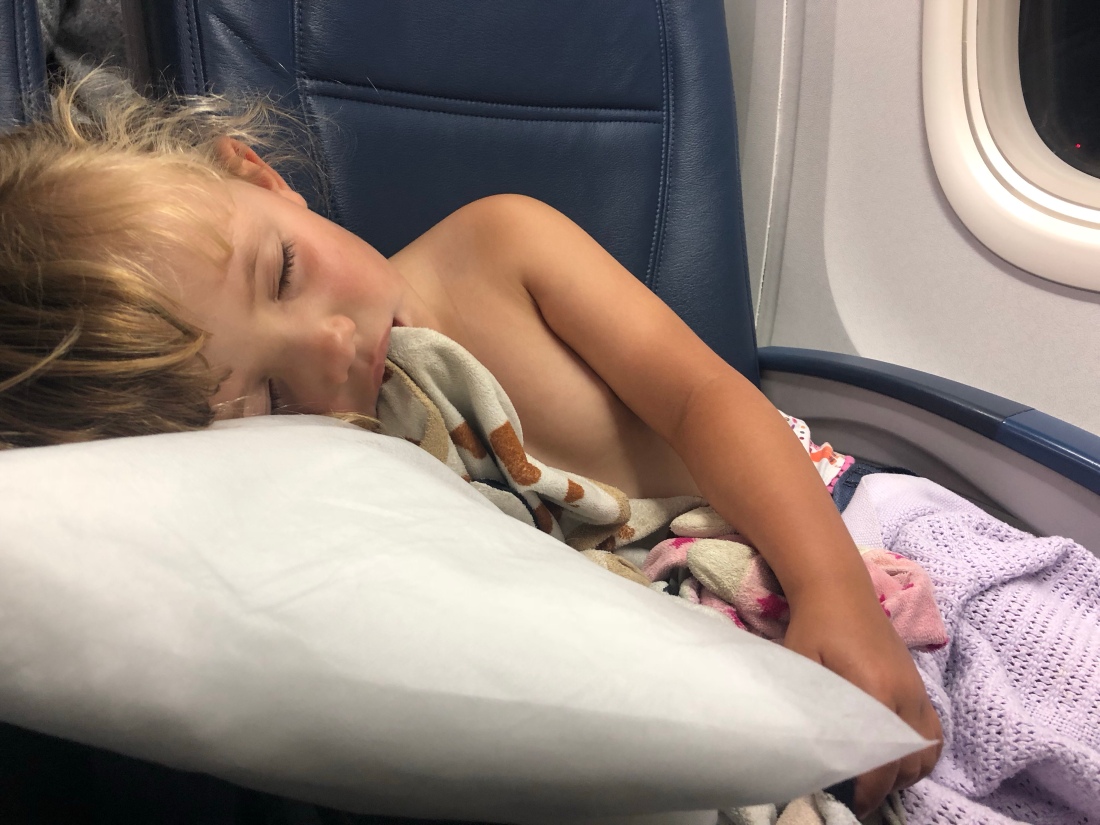 On any other day, landing nearly an hour earlier than scheduled would’ve been terrific, but I very much wished we’d had that extra hour for Cornelia to sleep. We landed at 04:30 (local time) and our train to Vancouver wasn’t until 07:45 and there’s not much to do at that time of day! 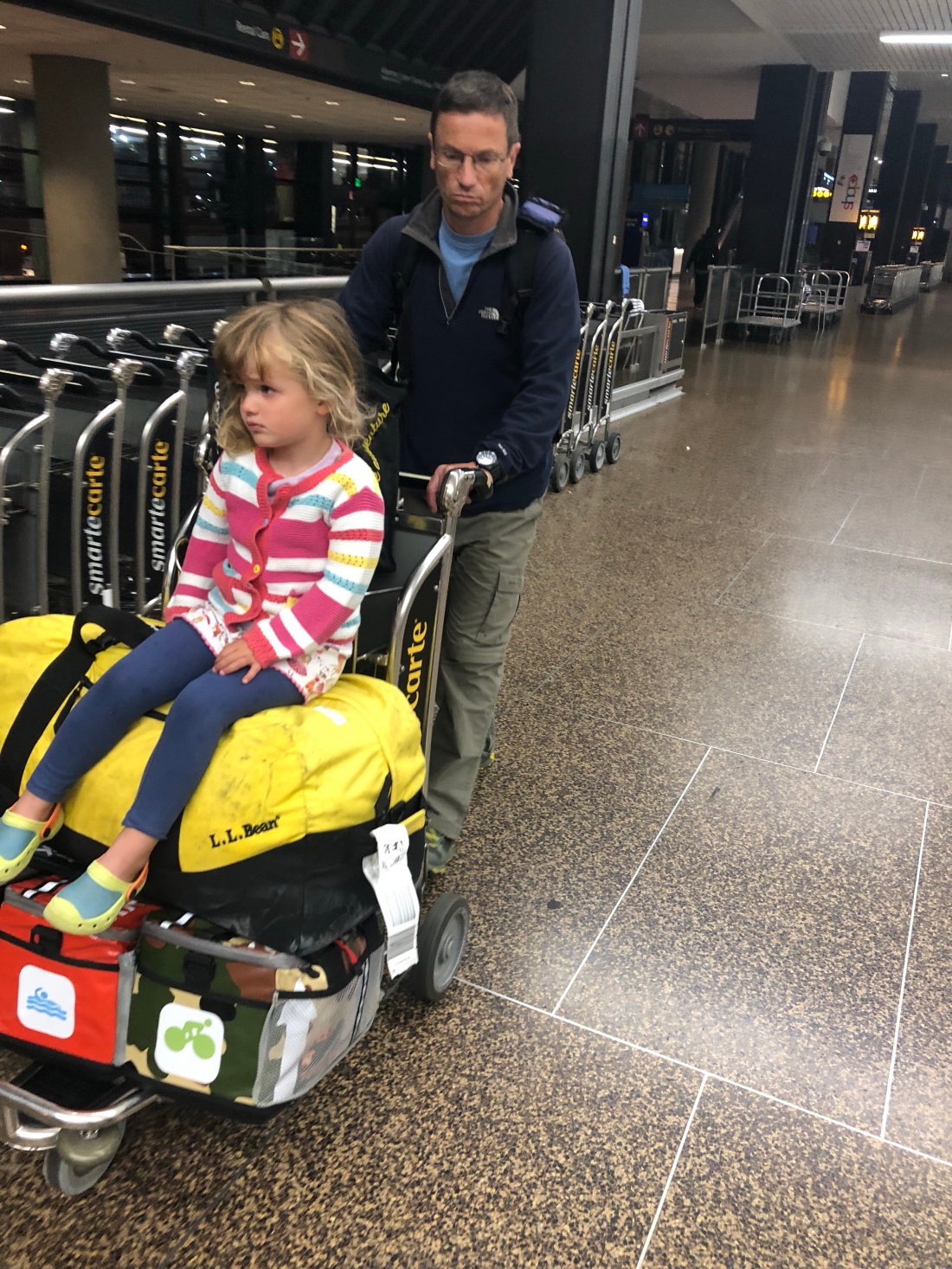 Our fabulous Uber driver, Jeff, had driven us to King St Station, and when we realised that the doors didn’t open until 06:00, he drove us around (free of charge) trying to find us a coffee shop, without any success unfortunately. We reassured him that we would be fine waiting outside, and it was warmer than we thought it might be, and it wasn’t raining, so he did indeed deposit us and we waited patiently for the doors to be unlocked. 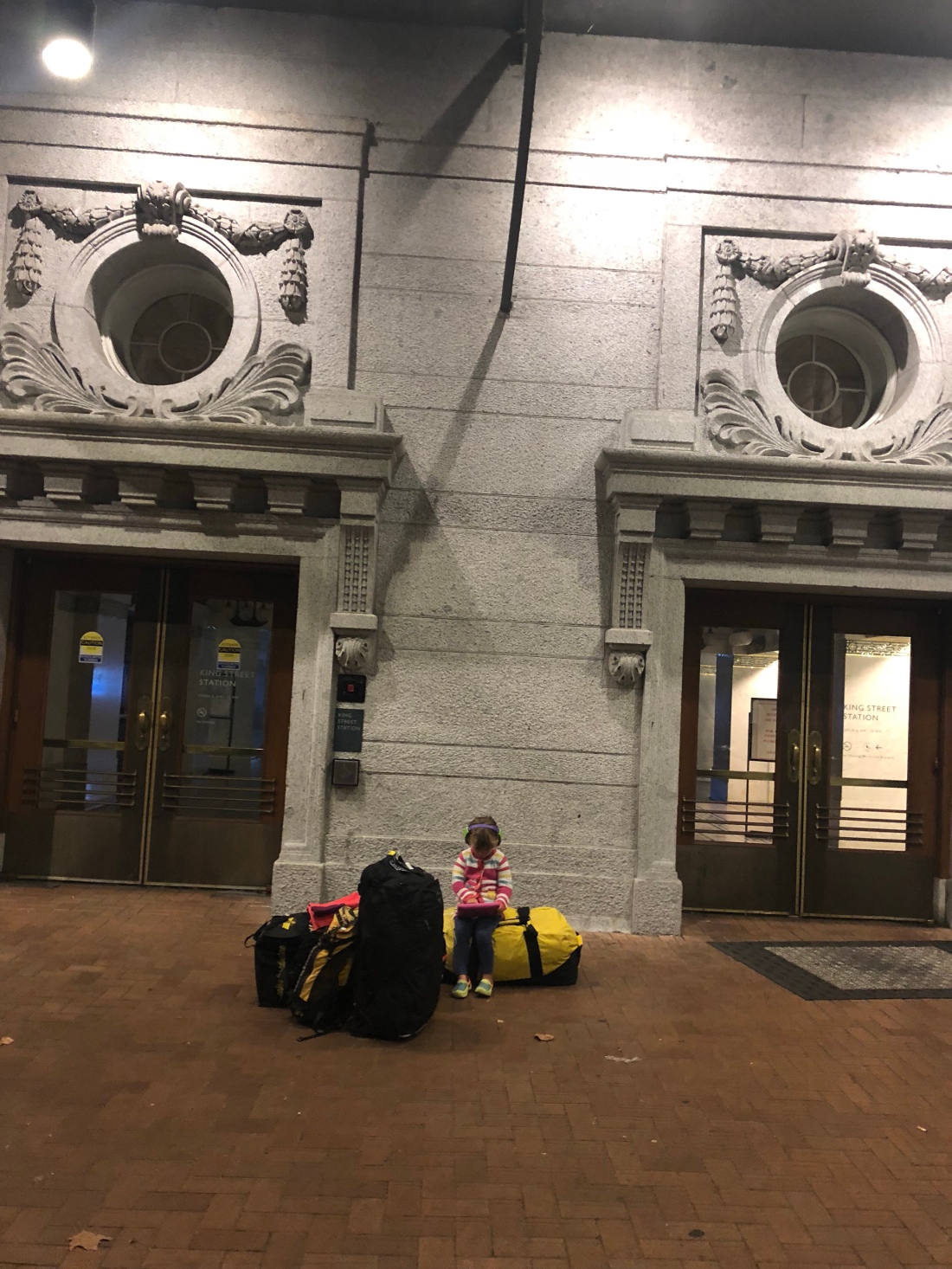 Bang on 06:00, the security guard opened the door and we lugged our bags in and sat down. It was another twenty minutes or so before someone came down and said that we could check our bags in, at which point those in the small queue that had been building behind us suddenly raced off to get to the front of a new queue! I’ve never seen so many old people move so quickly! Our cheery baggage guy checked in our bags and at last, we were down to just our hand luggage again. 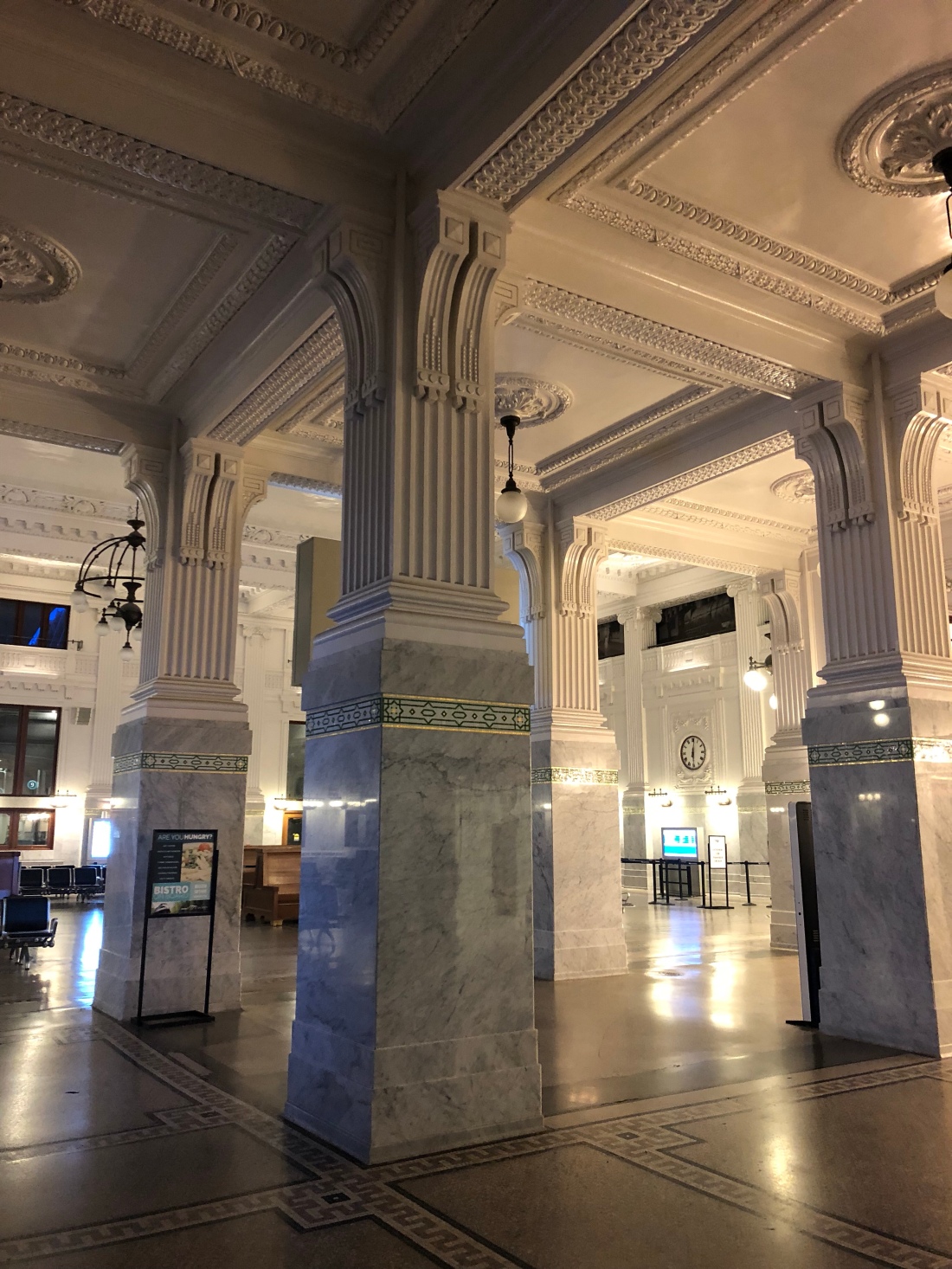 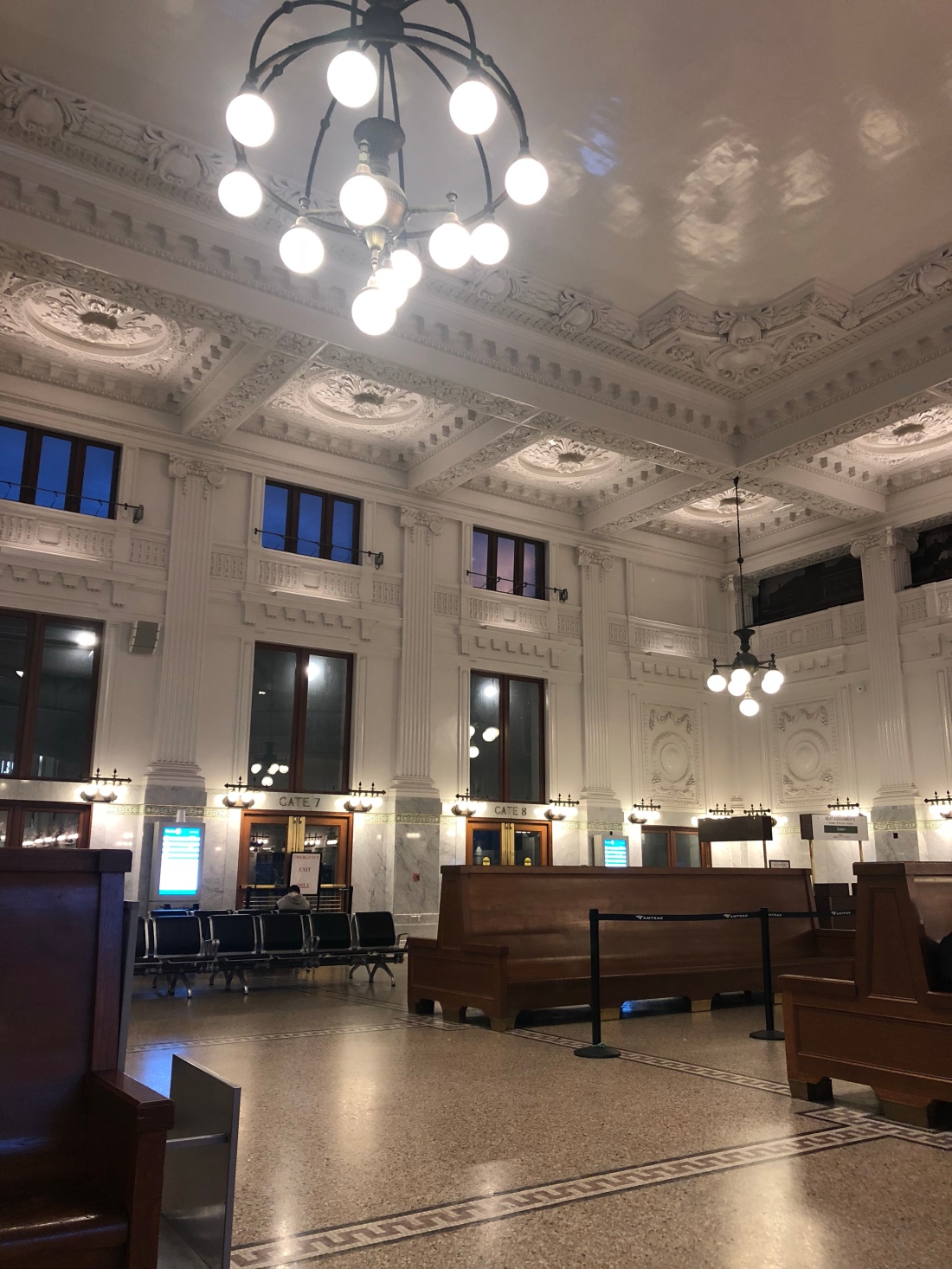 We returned to our seats and waited again for the train conductor to summon us for seat assignment. Again, everyone dashed in front of us, and as Ian had gone on a hunt for coffee, I decided to be very un-British and walk to the front of the queue (leaving Bugsy with the hand luggage, watching Peter Rabbit) and say “I’ve been here since ten to six this morning with my four year old, so I’m heading up this queue.” Or words to that effect. Amazingly, no-one argued with me and in fact, everyone was positively nice about it!

When the desk finally opened and Business Class has all been allocated their seats, I moved forward to the desk with our three passports and Cornelia in my arms. (She had come to join me in the queue moments earlier.) As he stuck the seat stickers on a small pink ticket, he asked where the third member of our party was… argh… he was still out getting coffee! They were both very kind and just said he needed to see them as soon as he returned. Thank goodness… I thought I may have been sent to the back of the queue! 🙈

Ian arrived fairly soon afterward anyway, and went straight up to the desk to identify himself, and all was well. But unfortunately, the Starbucks that was only a short walk away was closed, despite it showing as being open online. Ian tried to find another coffee shop, but said he felt quite threatened walking around in the dark, where the shelters had just emptied for the day and the men were adjusting to the start of their day. The second coffee shop was also closed, and he decided he’d come back to the safety of the train station rather than continue to search! Very wise!

We were soon called to board the train, and were annoyed to find people in our seats. We asked to see their seat ticket, but they said that there had been an error with the seat assignment and our seats had been double-booked. Now, I knew this couldn’t be true, as each seat sticker is taken from a sheet at the desk and stuck into your ticket. As I was first in the queue, I knew they hadn’t “got there first”. I asked again for their ticket stub and they aid they didn’t have it, but had been seated there Ian the knowledge that they would be taken our seats. The father said that the guy in the red cap had said we should see him, and e followed him down the carriage and out of the train. He confirmed that the seats had been allocated twice and we’d been given a pre-allocated ticket. Again, I disagreed, saying that I’d seen Joel (the conductor and ticket allocator) remove the stickers from the sheet with my very own eyes, and as we were first in the queue, it was impossible that we’d been allocated the seats after them.

Eventually he agreed he didn’t know what had happened, other than the two families were now sitting together and I needed to take it up with Joel. Thankfully, he was close by and I asked him what was going on. He apologised and said it had been his mistake. I said that we wanted a family seating of four and he found us one in a different carriage, only this time, the seats didn’t have a table in the middle (so how would Cornelia do her colouring or activity book etc?). He apologised and said that was all he had, but he then tracked us down again to say he’d reserved us a table in the dining carriage too, and we could move between the two as much as we wanted. This was really helpful, but I remain annoyed and slightly cross that out great, comfy seats that were on the “right” side of the train (along the coastline) were taken away from us without a decent explanation. 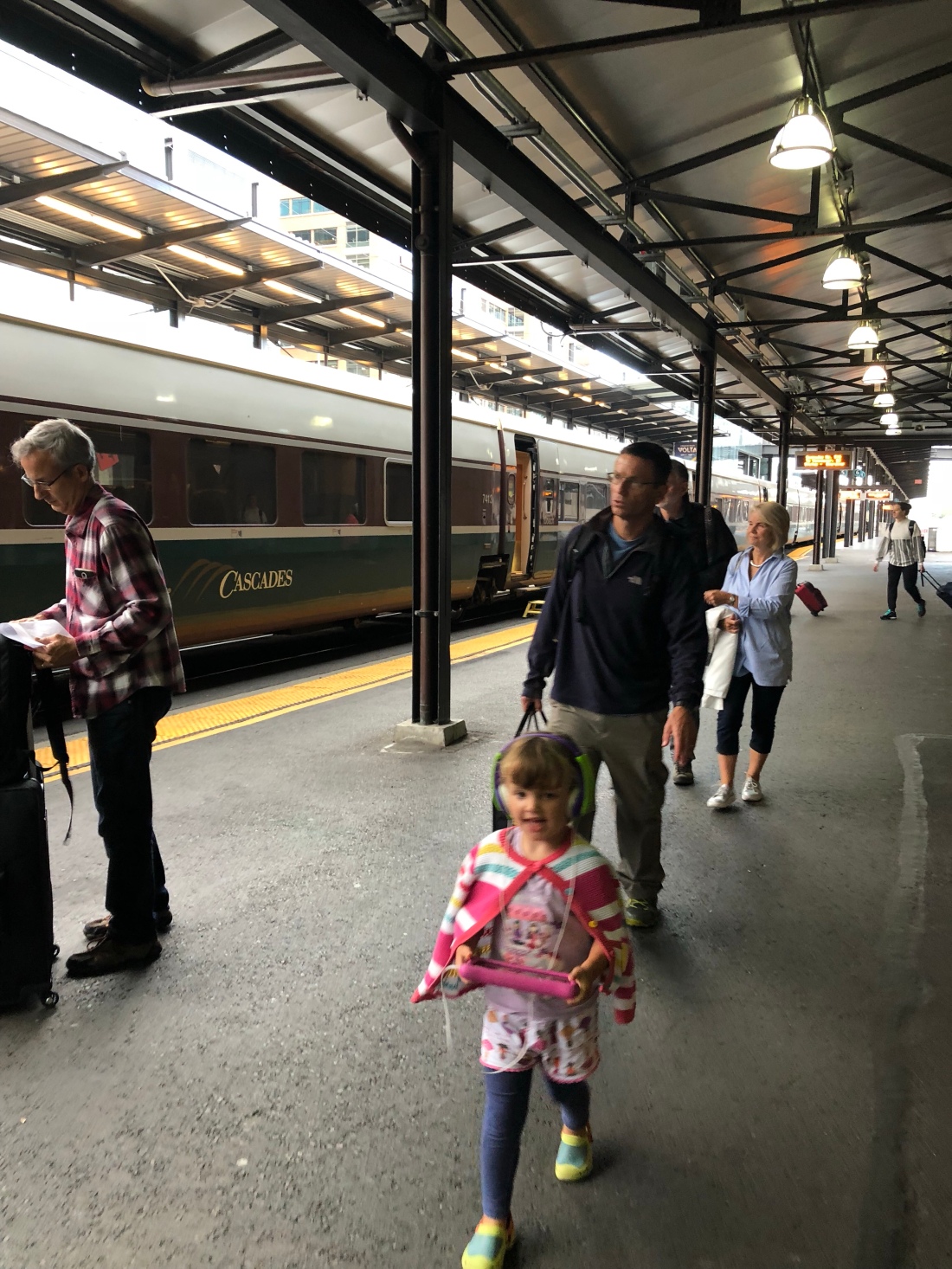 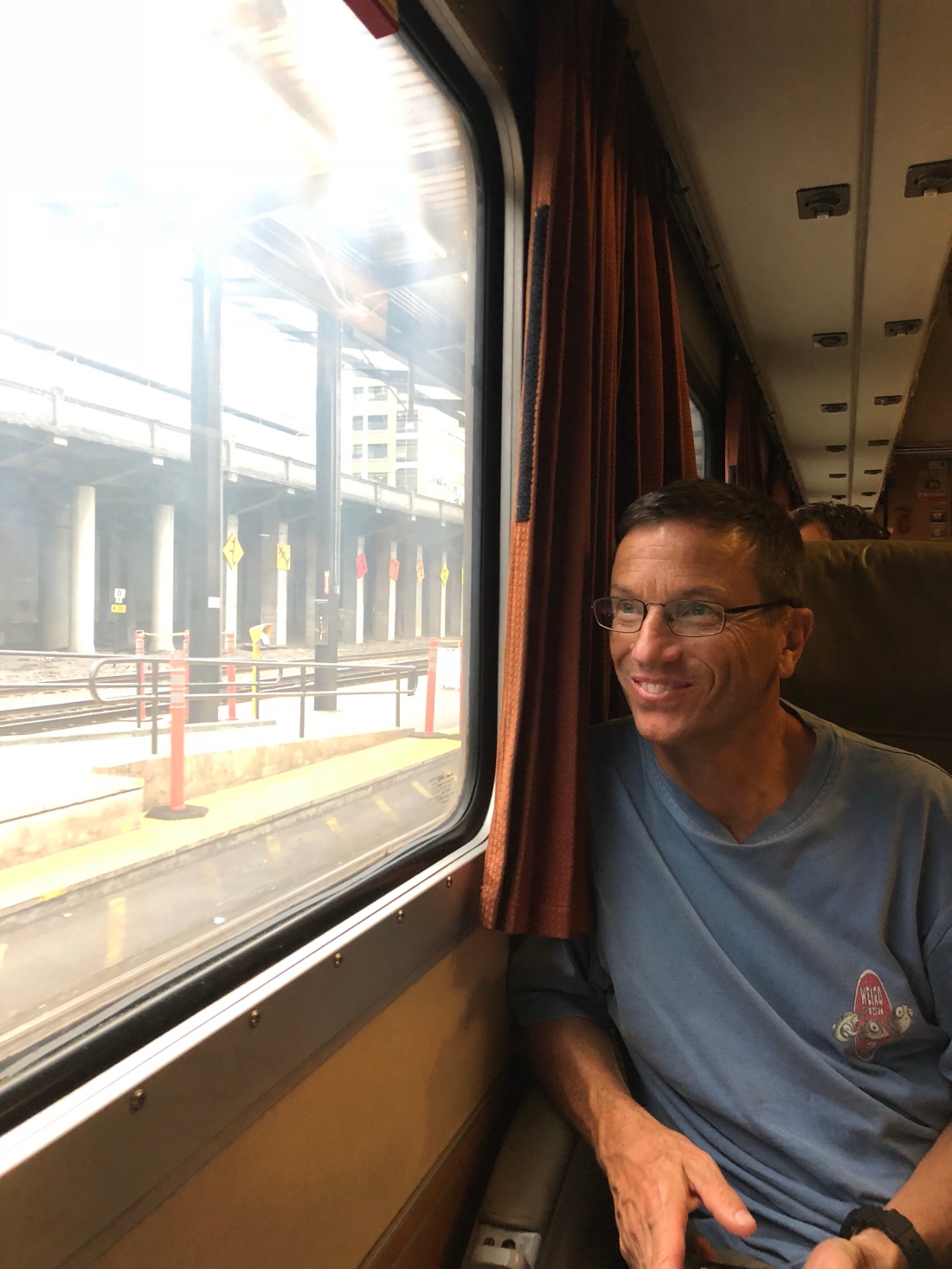 Anyway, seat drama over, we went to the dining room and Ian joined the queue for breakfast while Cornelia STILL watched her Kindle. Gah! She was so tired and I really wanted her to sleep but she was having none of it. She sulked when Ian returned with porridge as it was too sweet (my fault for adding brown sugar!) and wouldn’t eat anything else, but as she’d had a pain au chocolat at the train station, I wasn’t too concerned. 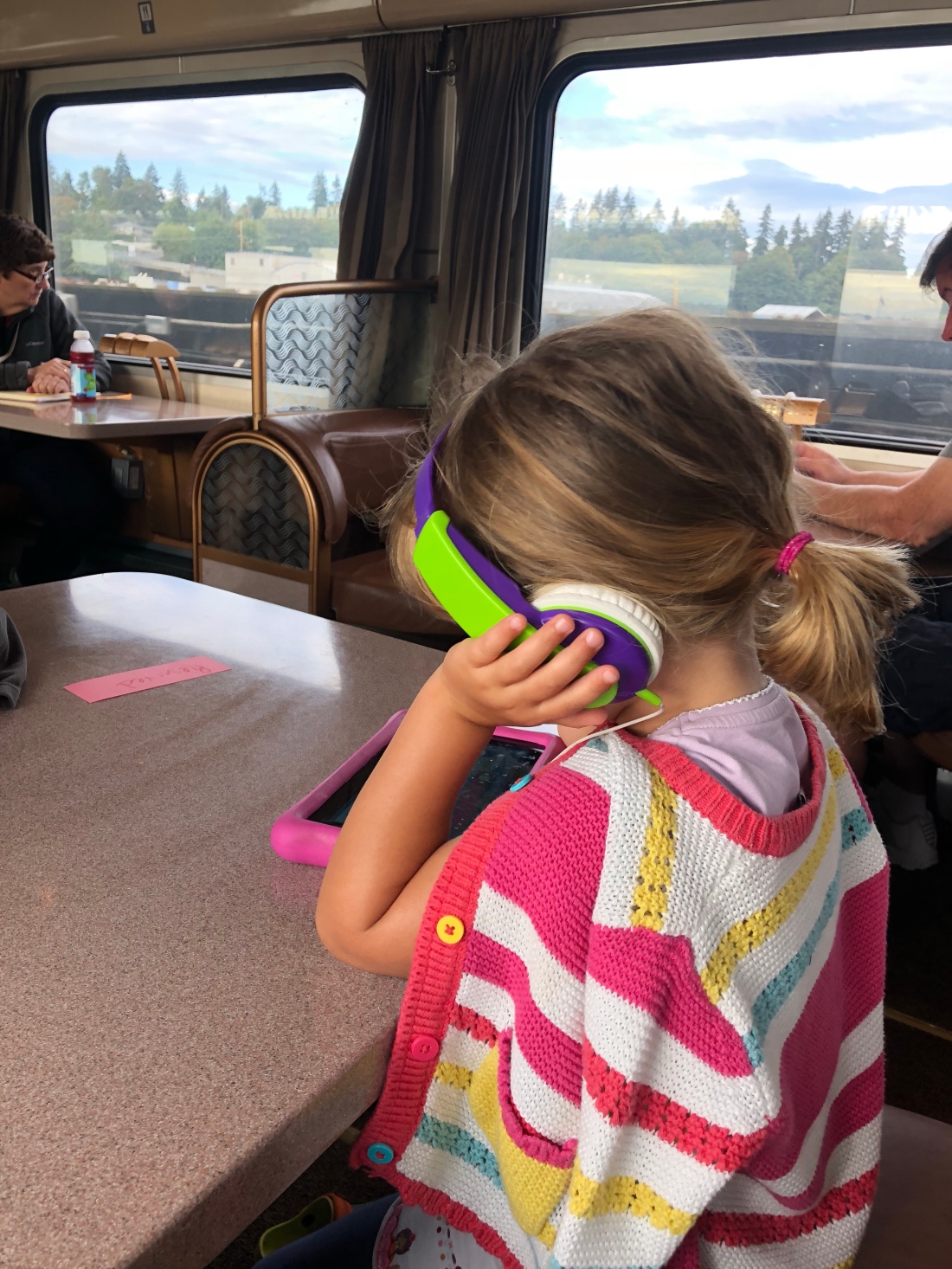 We set off on our four hour journey, and our first stop was Edmonds. This was just after a long stretch of coastline which, having spent a week in Maui, was meaningless and unimpressive to Cornelia who remained glued to her Kindle. We continued along the coastline, admiring the shipwreck, fishermen and smart shore houses, arriving next in Everett then Stanwood where the countryside turned distinctly English, with its green fields and woods. 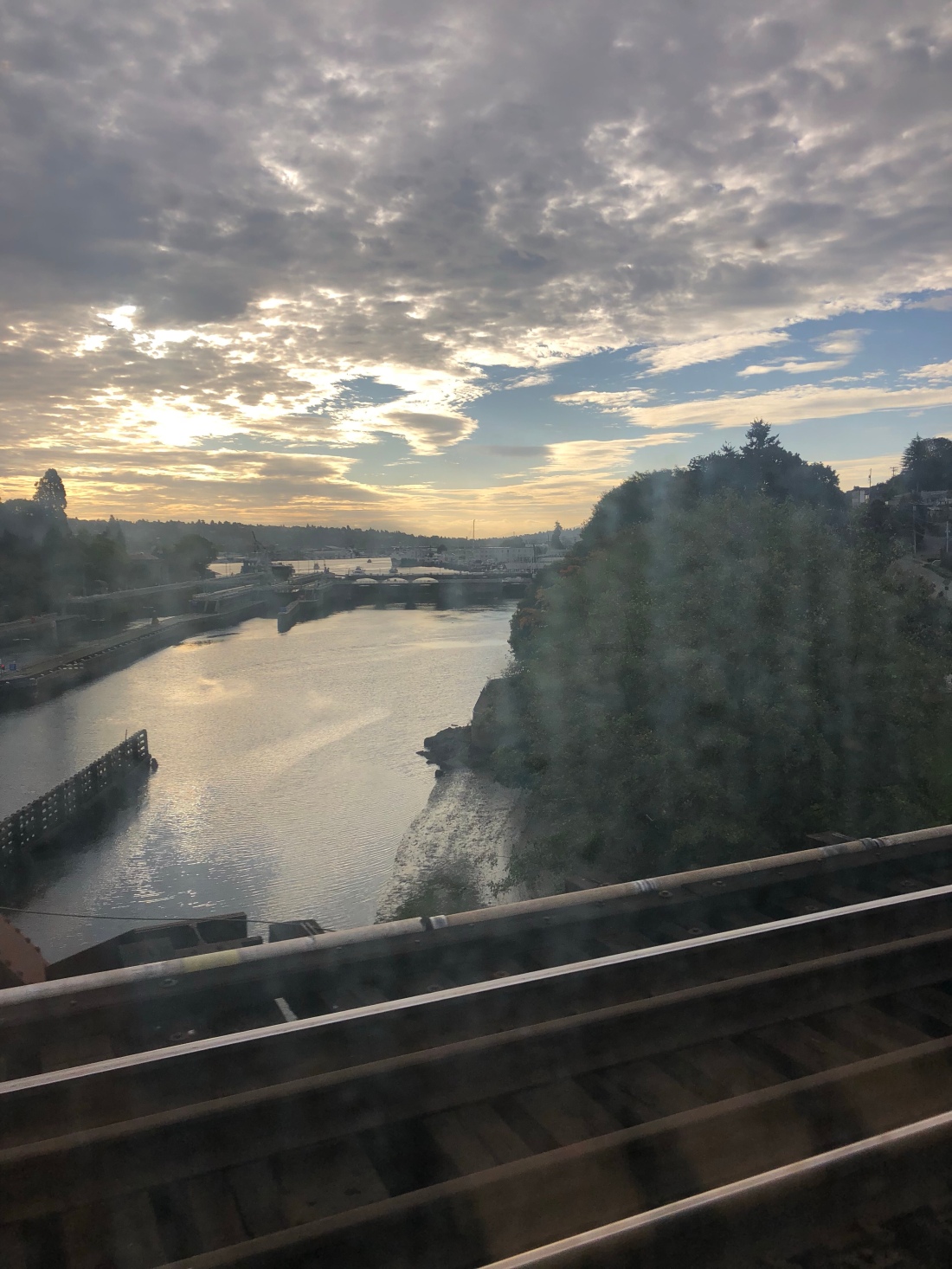 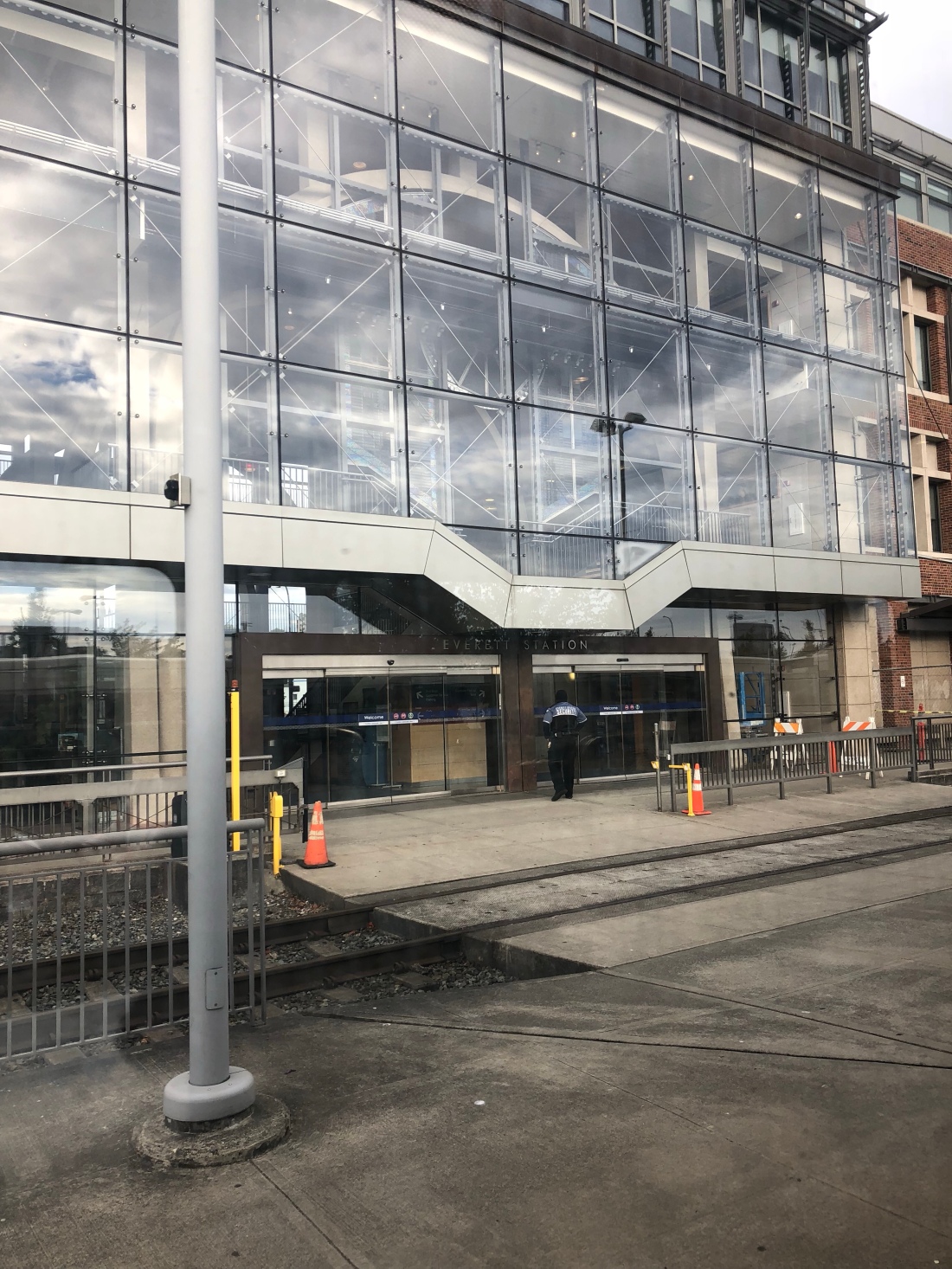 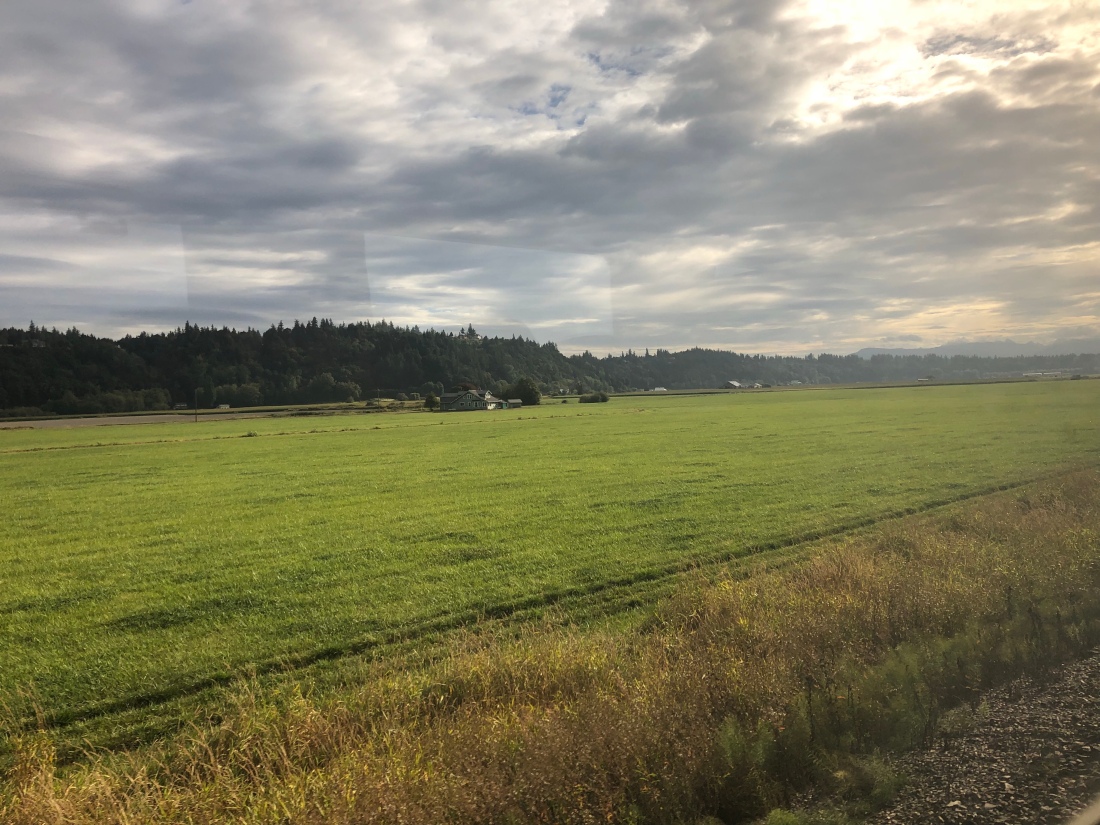 Just outside Mount Vernon, we waited in a siding for a while for the sister train, on its way to Portland to pass us, before we could continue along the single track.

Once Ian had finished his coffee, I’d agreed with Cornelia (after a quick mini tantrum from her) that we would return to our other seats and she would try to go to sleep “just for five minutes”. She took some time to settle, crying a bit and trying to take back her Kindle, but hurrah, sleep consumed her and she fell sound asleep laid out across the chairs. Phew! 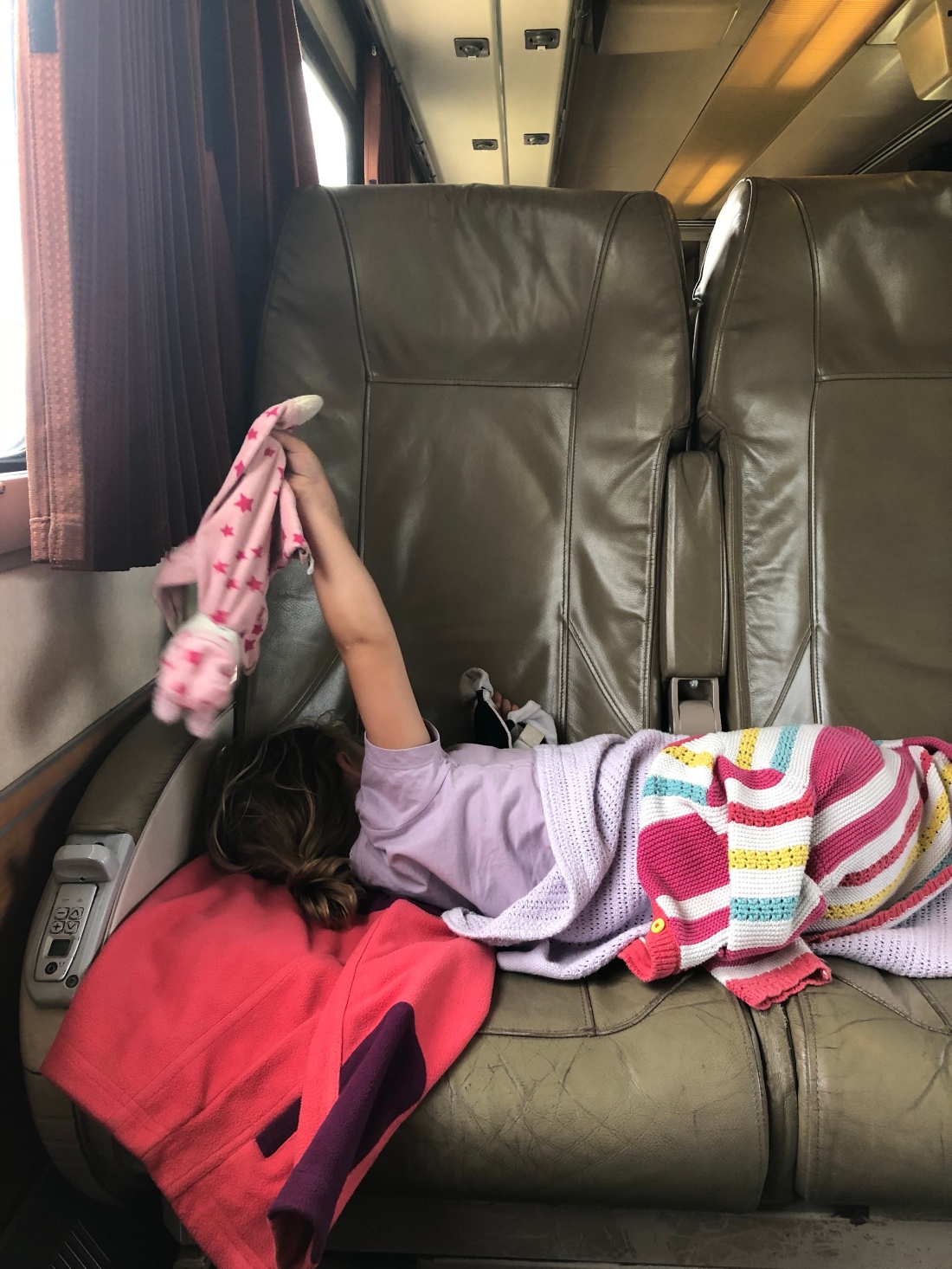 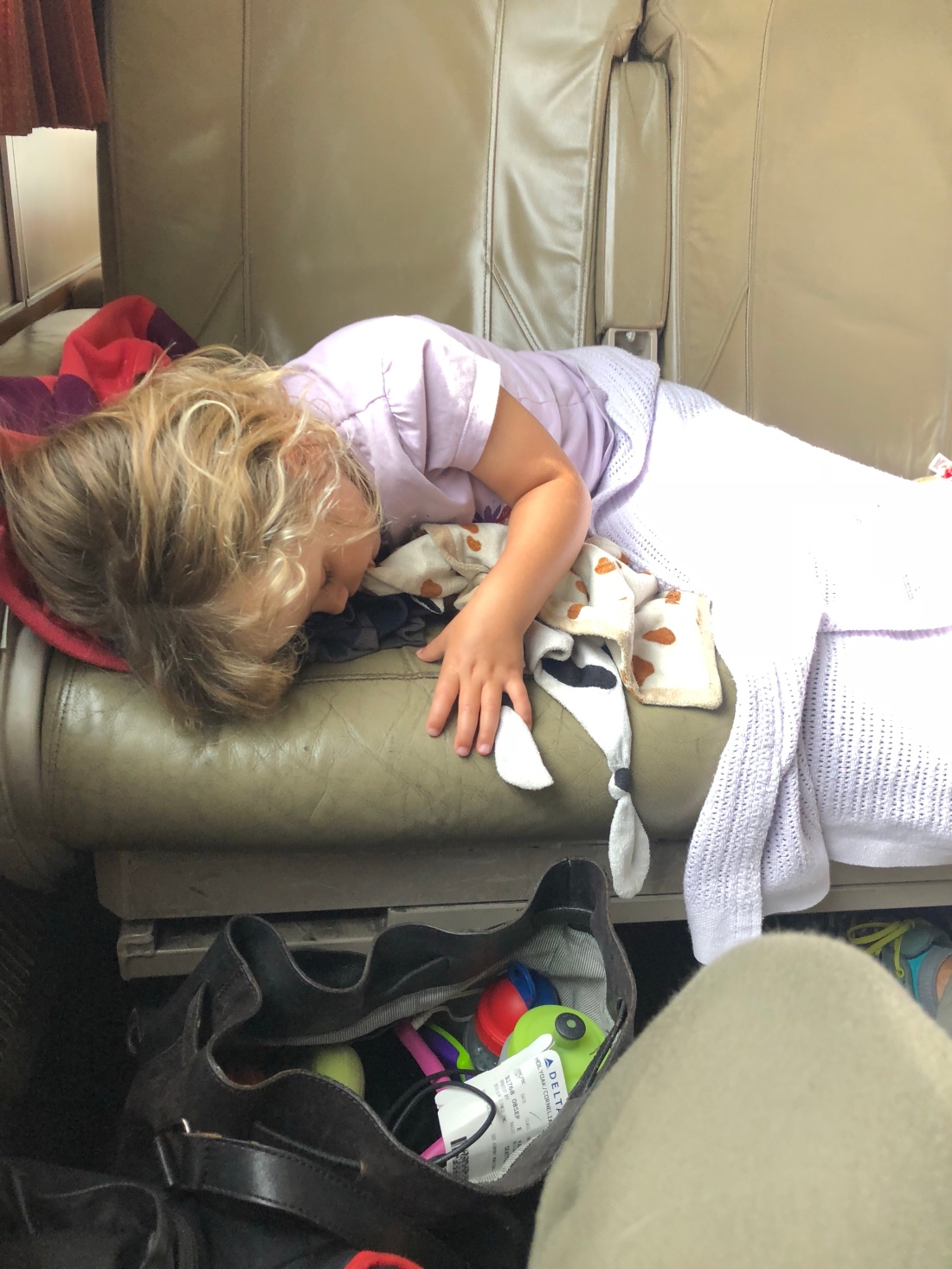 Ian and I both had a little doze too, and my little power nap did the trick and I felt reasonably refreshed. 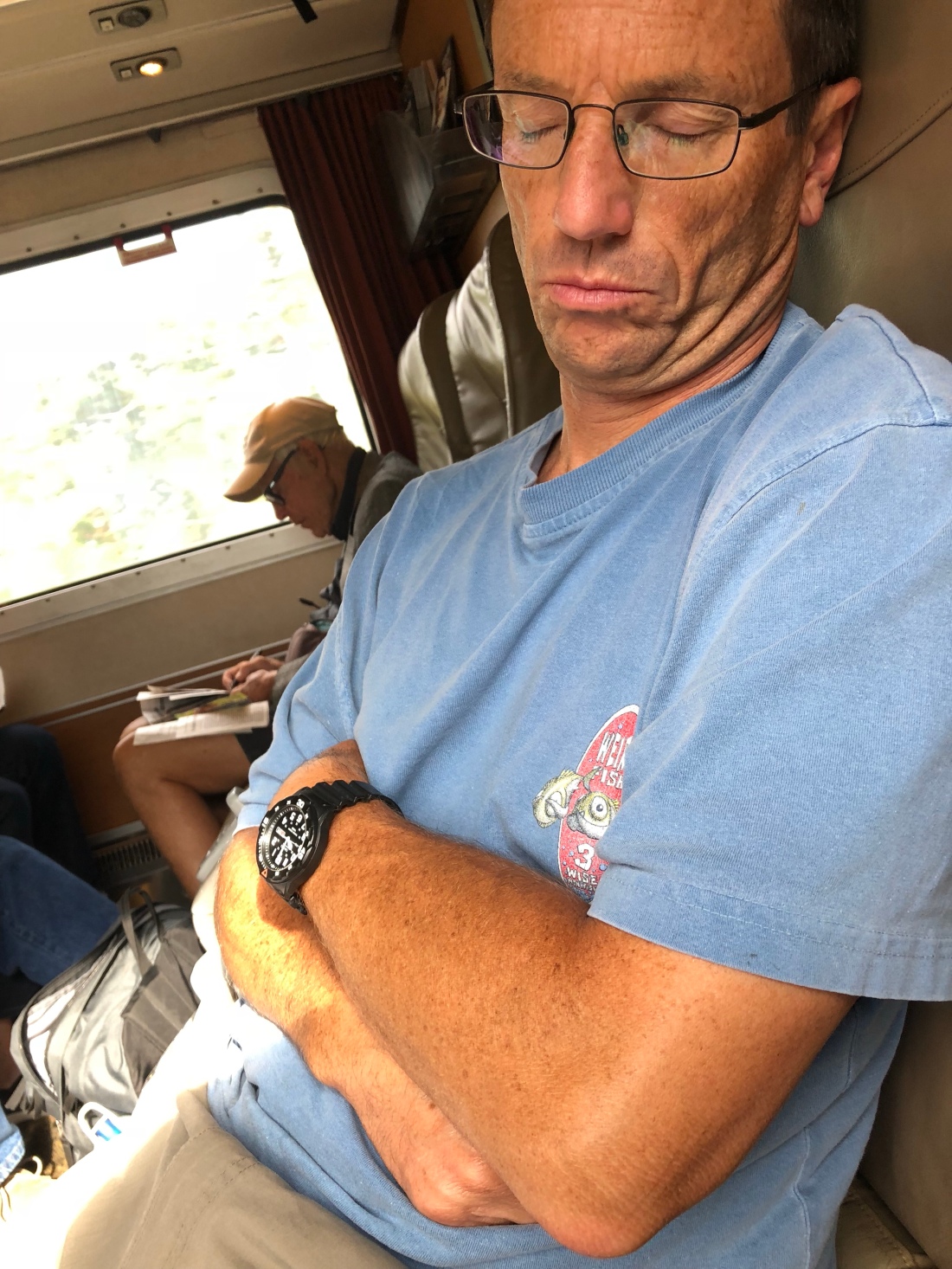 Shortly after waking, the conductor called out to let us know we were now entering Canada and that we would shortly be going through the little town of Whiterock, so called due to the large white rock it housed! I stood up to take some photos, and must admit, the white rock was a bit of an anti climax! There were some more amazing houses though, set up on the hills and they must have quite a spectacular view! 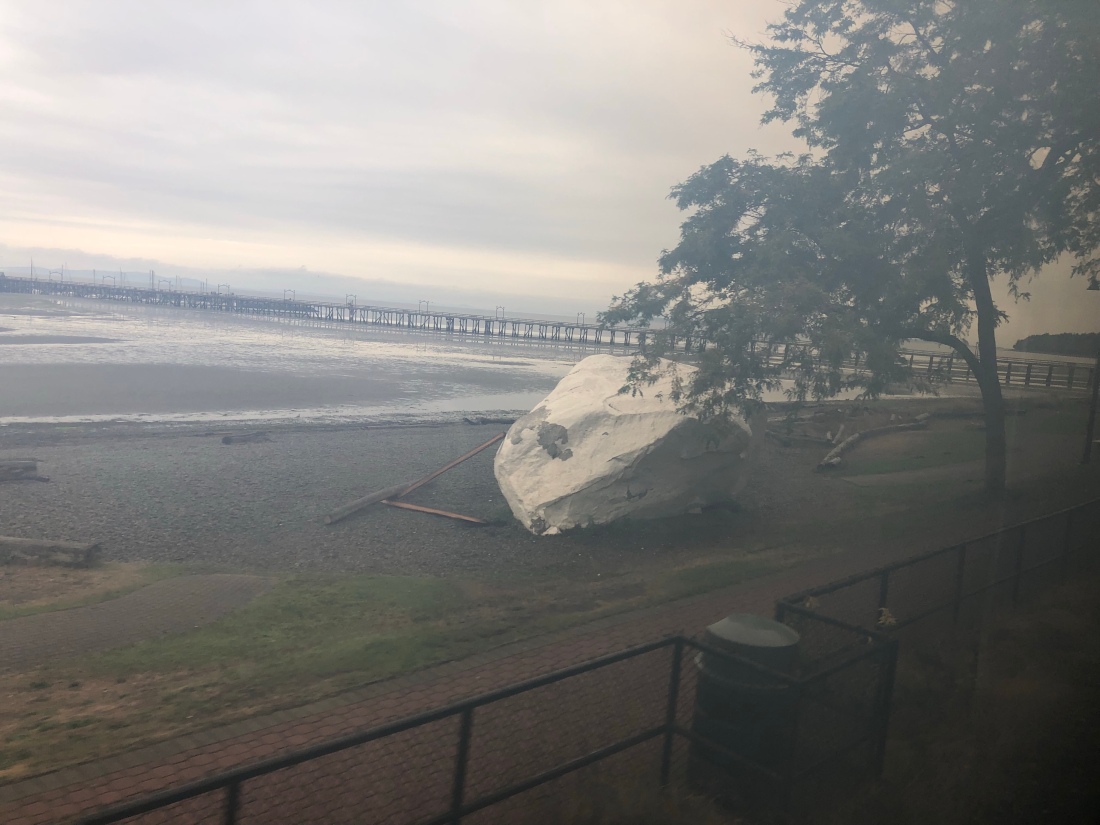 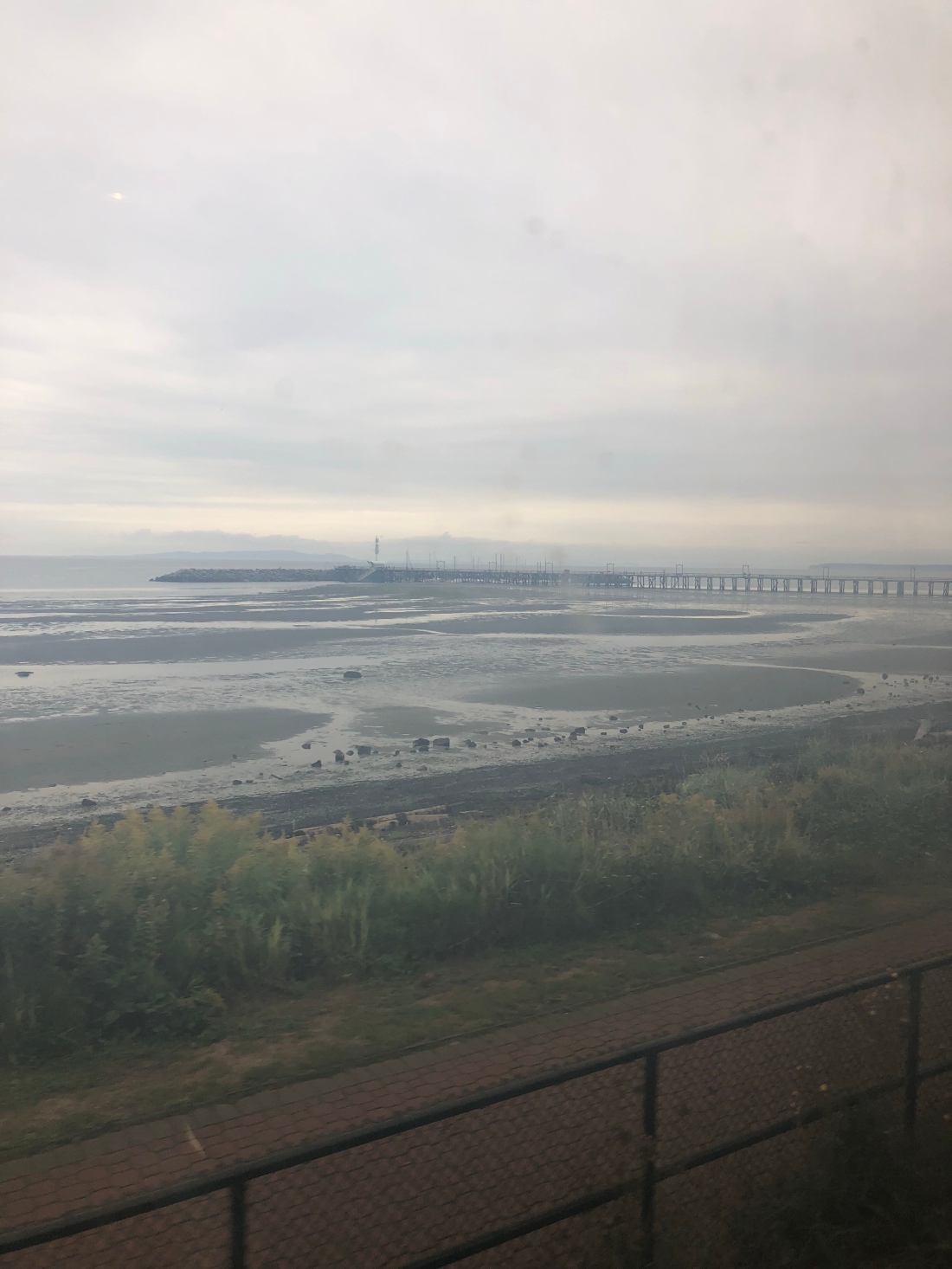 We then crossed the Fraser River via an impressive steel construction, and continued rolling slowly towards Vancouver, passing through more industrial areas. Bugsy slept through it all. 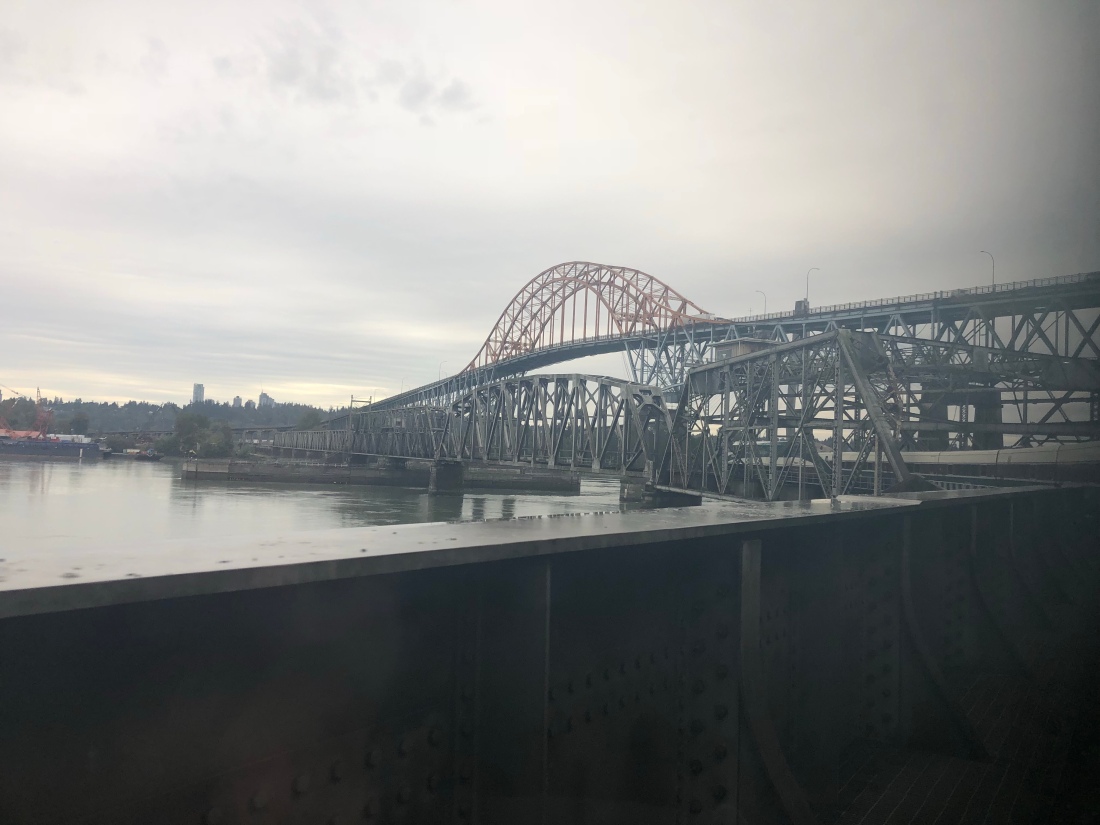 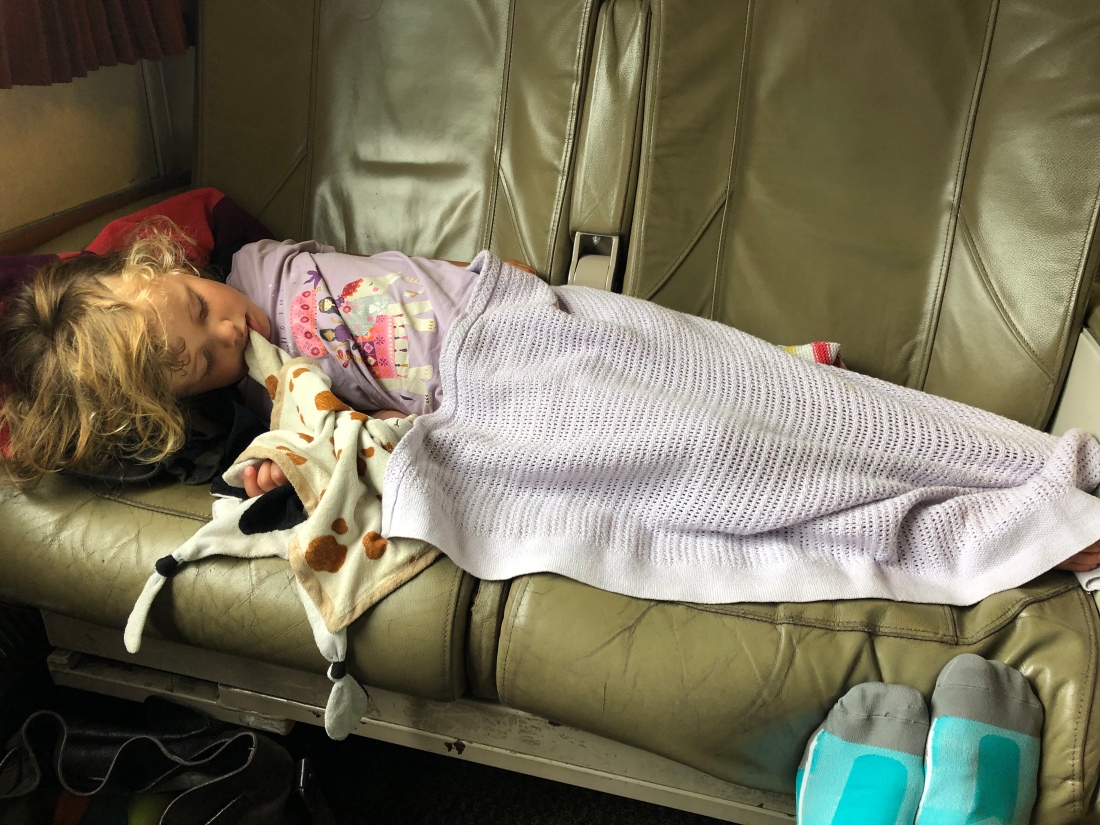 I managed to dress Bugsy in her slumber, and once the luggage had been unloaded, we were herded off the train in order of carriage. I carried Cornelia, still half asleep, out into the Vancouver drizzle with my rucksack on my back, and spied Joel again so asked him if there were any luggage carts around. He kindly sped off to fetch one for us and as we made our way down the line to customs, so we collected our bags. Annoyingly, one of my tough KitBrix bags has been torn slightly. We have to hope it holds out for the rest of the trip as we are relying on every inch of space!

The long queue moved quite quickly and we made it through the friendly and welcome passport control in good time, only to join yet another queue for the taxis in the rain. Il pleut 🌧

We had a friendly driver to our apartment where we were met by Annie, keen to show us around as quickly as possible and then leave. I have to say, although the apartment is spacious, it’s probably the least impressive Airbnb we’ve stayed in. There are towels still in the tumble dryer – I had to take out the sheets and pillowcases that were in there at the same time, because none of it was drying, and I feel as if I shall be spending half our time here drying their previous guests’ laundry!

The cupboards are bare: no cooking condiments like oil or salt, as we’ve had in literally every other booking we’ve made, and there isn’t a single plate! There is some of the worktop laminate missing in the bathroom, which I discovered when the jagged edge caught my t-shirt and ripped the cotton. We are only here for two nights and my grumpiness is probably attributable to extreme tiredness!

Ian went out to the supermarket Annie had recommended for milk, OJ etc and some lunch, and returned over an hour later having not had much success. The supermarket she’d recommended was an Asian market which didn’t have our usual foodstuffs. Still, he did very well to come back with a bag of pasta, a tin of tomato sauce, frankfurters and tuna, as well as cereal, milk and juice!

When he came back, I was desperate for a nap, so Ian took over Cornelia-entertainment (trying to keep her off her Kindle for a few hours!) and I was out like a light for half an hour, until Bugsy decided she missed me, so woke me up. 🙄 Ian managed to extract her from the bedroom again and I dozed on and off for another hour until I realised that if I stayed asleep, I’d never get through the night, so I forced myself back out into the living room.

Ian then requested some time for a power nap, and Cornelia and I played Uno and read some stories etc, while he had his snooze. 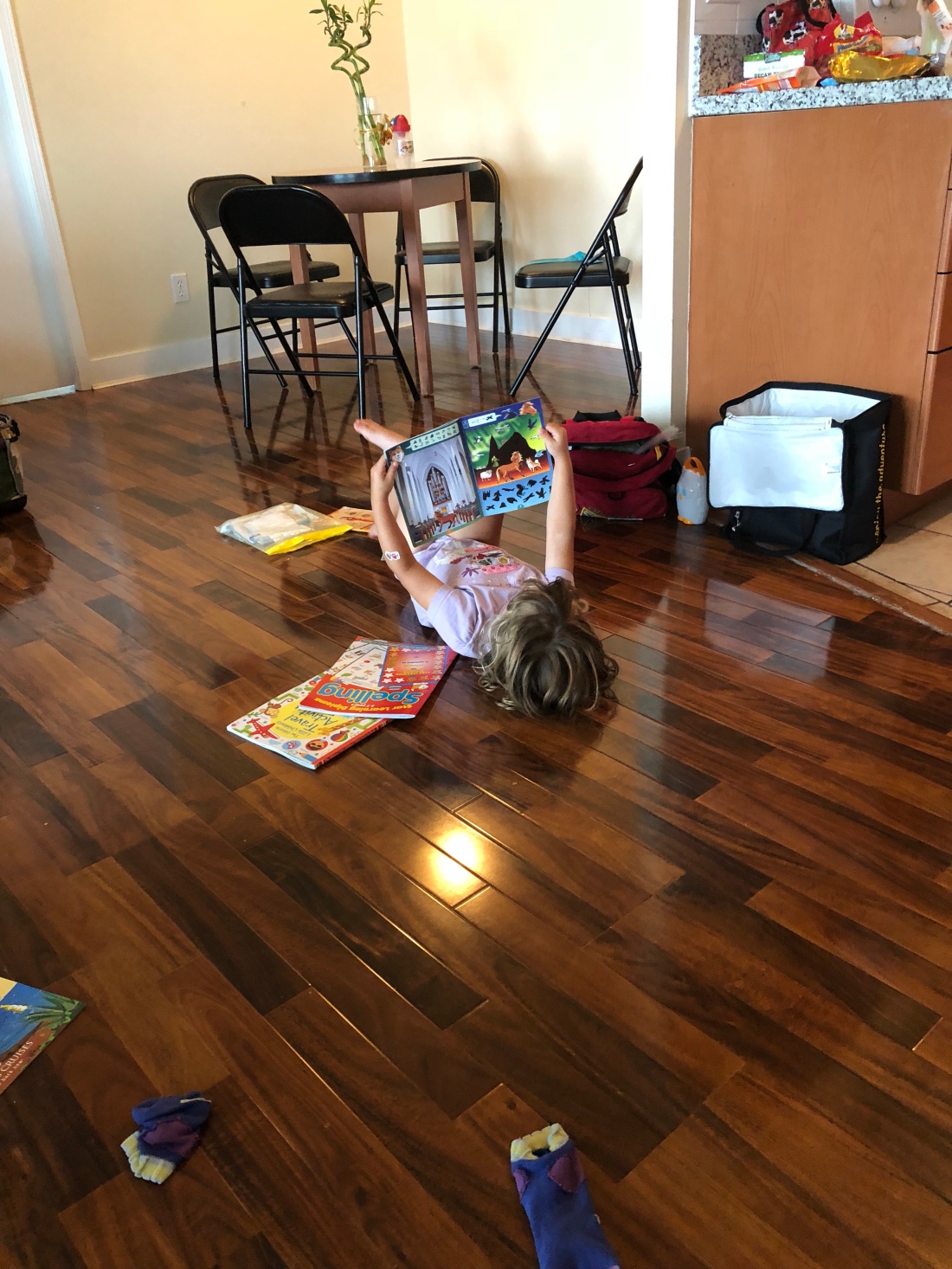 It was then time for Cornelia to have a bath, while I prepared our supper. After an initial “I’ve changed my mind, I want tuna not frankfurters with my pasta, please” Cornelia ate most of her bowlful and was ready for bed. She struggled through her teeth brushing – she doesn’t like her new toothpaste, but unfortunately, she’ll have to get used to it as that’s all we have for her – but recovered well enough to keep her brand new story book that I’d bought for her in Alaska as a surprise.

We all settled in her bed to read it, and Ian did his Mumfi chapter, and I cuddled her for five minutes by which time, she’d already fallen fast asleep. I don’t think we will be far behind her!

3 thoughts on “Seattle to Vancouver Amtrak 🚂”