I decided late last night to put my running kit out so that I would be more likely to go out first thing, but I had a dreadful night’s sleep, awake probably every hour for a period of time. I was hot, I was cold, I was thirsty, I needed to the loo, pillow, no pillow… it was just one of those unfortunate restless nights! Ian and I were both awake at 07:15 and he asked me if I was going for my run. I said I just needed a bit more sleep… and woke again at 08:30! Bugsy woke up just as I was about to WhatsApp chat with Donks, around 09:00, to wish her a very happy birthday! It was lovely to speak to her and Charlie on their special day. 😍

Having spoken to Donks for nearly had an hour, I realised I would just about have enough time for a quick run while Ian took Cornelia for breakfast, so I did indeed put on my running kit and head out.

It was sweltering hot already, and I’d said to Ian that I wouldn’t go out for more than about twenty minutes, as I wasn’t carrying any water and have been very mindful of not making silly avoidable errors, like ending up with heatstroke! 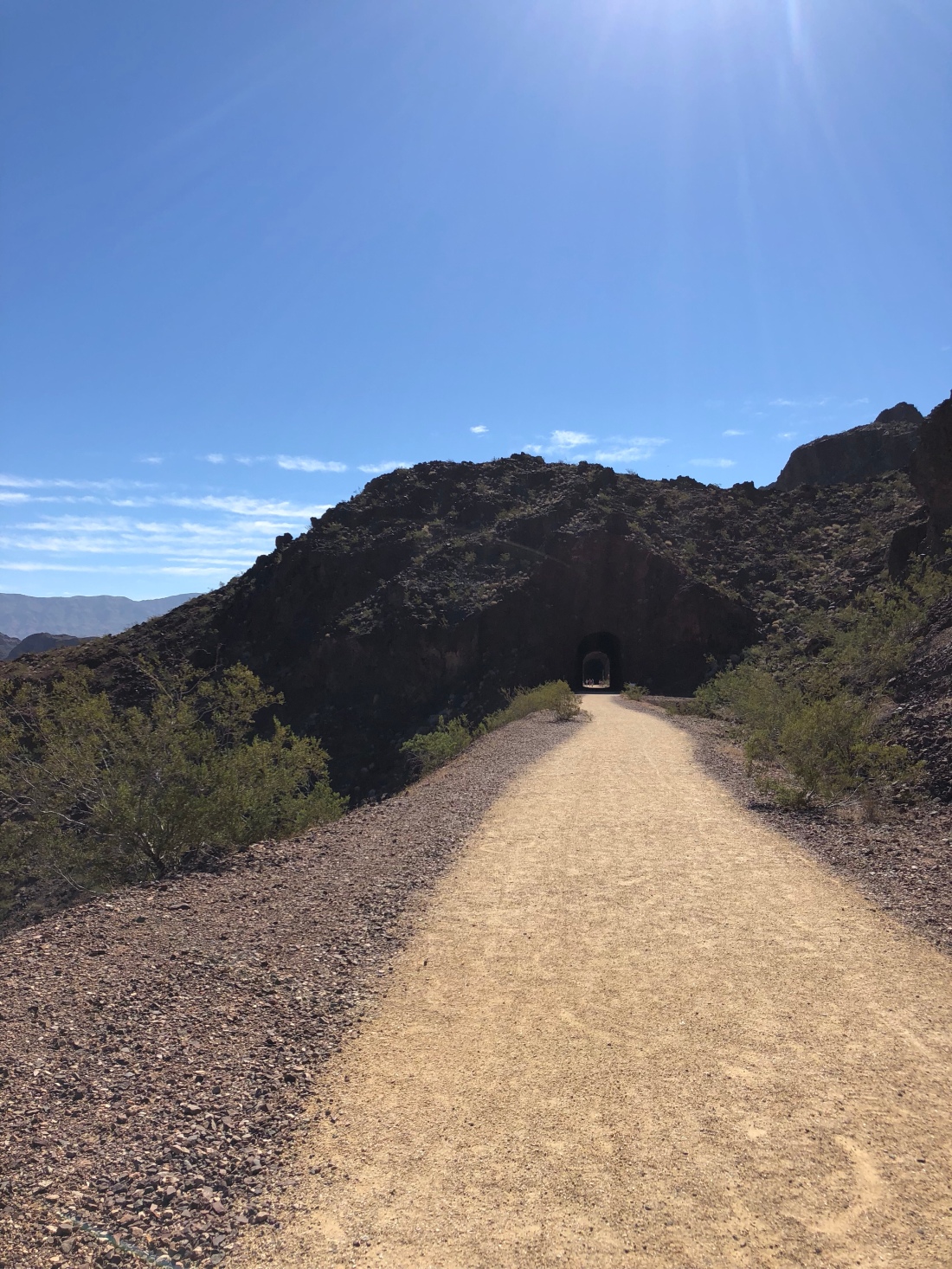 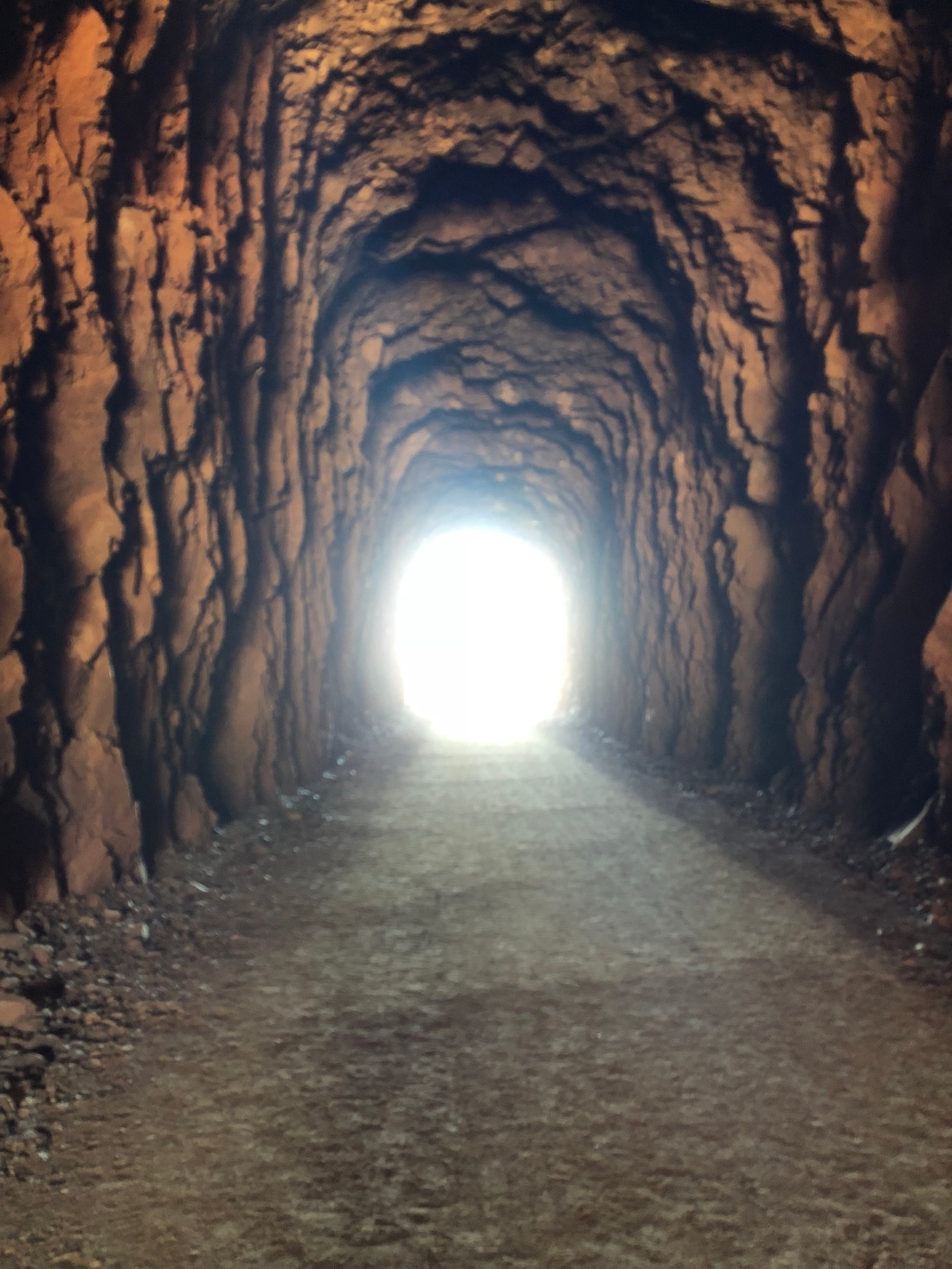 The run was fabulous, as most runs are of course, but it was tough in the heat that was already around 100 degrees. I ran through the car park and onto the trailhead, down the gravelly track and onto the flat (still gravelly) old railroad, overlooking the bright blue Lake Mead, where Ian and I had visited on honeymoon. The moon was still out, almost translucent against the blue sky. It was all very ruggedly beautiful, spoiled only by my huffing and puffing and sweating! I turned around after a mile, just as I reached the second tunnel and as I caught up with three girls who were out hiking. I gasped a “hi” at them before turning around and heading back to the hotel. I had thought that the hotel was quite unattractive, and although I still think that, I can see why it is this way – the browns and creams blend into the general colour of the surrounding landscape quite well. The last little bit was uphill and I haven’t run that slowly for a while! I even had to resort to a stumbling walk at one point, just so I could get my heart rate back down below 180! 😳 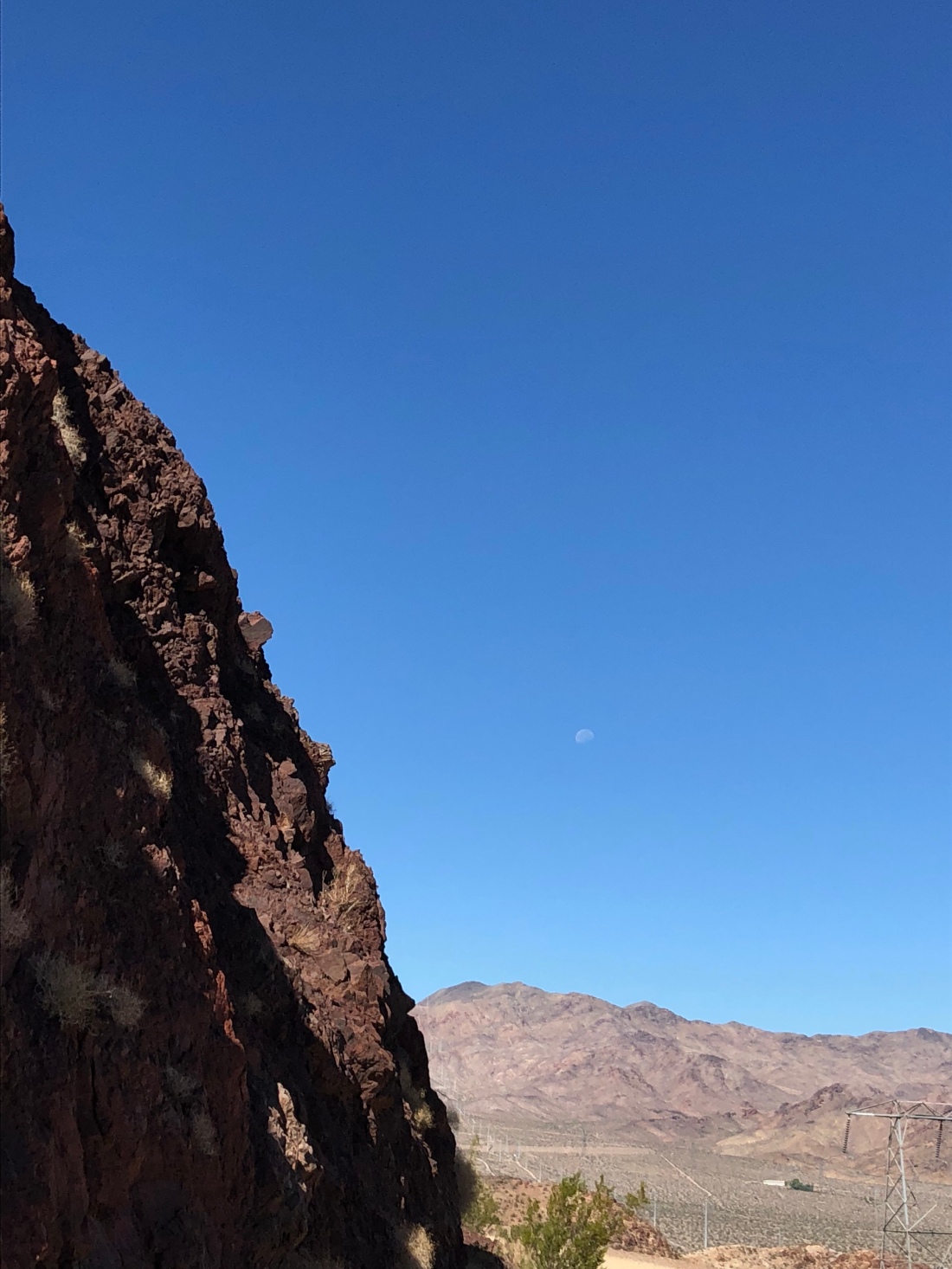 Back at the hotel, I went straight to the cafe where we had had dinner last night and found Ian and Bugsy there, halfway through their breakfast. I was completely not in the mood for food, but managed a pint of water before I went on up to the room to pack and shower.

Cornelia and Ian came up about fifteen minutes later, and there was just a bit of packing for Ian to finish off while I showered and dressed. We’ve been really lucky with our hotels so far – this room is big again, giving us all space to move around without having to squeeze past each other.

We left the hotel shortly after 11:00, following an amusing conversation with the receptionist:

Hi, was everything okay with your stay?

Yes, it was lively thanks. The only thing we noticed was that there was no hotel information in the room.

What information do you want?

Well, I don’t need anything just now. It’s just that normally we’d expect to see a folder containing information about, for example, the different restaurants you have here in the hotel and a description of them with opening times. That sort of thing.

Oh, the only restaurant we really have for kids is the Big Horn Cafe.

Yes, I know that now. We went online to look. But that sort of information is usually available in a folder in an hotel room. Like pool opening times, the local area, that sort of thing. It’s just there wasn’t anything in the room.

Oh, we have a leaflet about the hotel just here.

Yes, but I don’t need a leaflet now! I’m just saying that there wasn’t any information in the room! There has been some sort of information folder in every hotel I’ve ever stayed in, apart from this one! I wasn’t sure if you don’t provide them, or whether it was just missing from our room.

Right, okay, thanks. Do you want some information about the local area and restaurants.

No, it’s fine, we’re leaving now and I think we’re missing the point. Don’t worry – I was just mentioning that something might be missing from our room, but maybe it was just never there.

Okay, sorry about that!

By the time this frustrating exchange had finished, Ian had retrieved the car from the car park and was waiting outside. We loaded up and set off for Vegas airport to return our hire car. 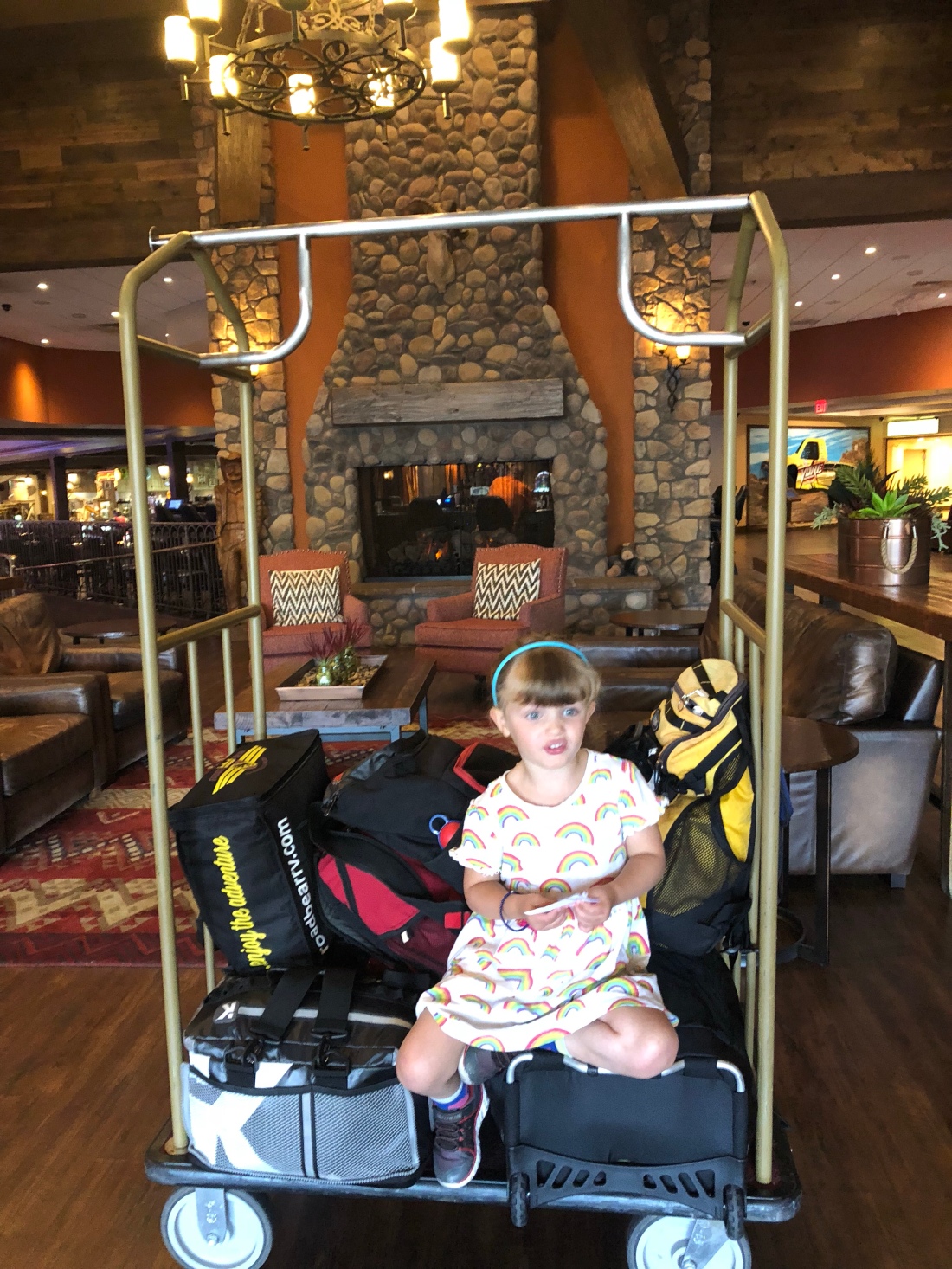 Thankfully, that was a simple and efficient task, and we took the shuttle bus over to Terminal 3, where we checked in and dropped off our hold luggage. Unfortunately the only seats available had us all separated and although I managed to change them, I was still two seats away from Cornelia (but in the same row) and Ian was two seats in front of us. I hoped that the person in between me and Cornelia (in the aisle seat next to me) would be willing to swap (or alternatively, take charge of a four year old for the flight…!)

Ian’s bag was checked AGAIN! His rucksack has been tested and searched on every flight we’ve taken on this trip so far! Once he’d been given the all clear, we went to the “pub” for lunch and had a very long wait for our order to be taken. None of us was very hungry, but it would be a while before we would be eating again, so Ian and I shared a wrap, and Cornelia managed two of her five enormous chicken nuggets (think man hand sized). We took the remaining three in a takeaway box, although I wasn’t quite sure when we’d be so desperate, we’d resort to cold nuggets, but you never know!

Once on the flight, Cornelia squeezed into her aisle seat next to two larger men, both of whom were spilling over into the adjoining seats. I didn’t hold out much hope that whoever was sitting next to me would want to swap with Bugsy, but the very kind lady immediately agreed and so Bugsy was able to cross the aisle and be seated next to me. Phew!

We played “boo” with the fifteen month old boy in front of us for a while, until the seatbelt sign went off, and Cornelia asked Ian to retrieve her Kindle from my rucksack. She had lost it for two days, but as she didn’t make a fuss when she asked if she could have it today and was told “no”, I decided that she could have it for the afternoon flight, to keep her occupied.

About a third of the way through the flight, I nipped off to the loo, and when I returned Cornelia had decided that she wanted Daddy to stay next to her, so I had the luxury of some time doing nothing on the plane!

We landed in Seattle, and disembarked to much cooler weather than we’d enjoyed for the previous week. It wasn’t as cold as we thought it might be however, and we didn’t need to add any extra layers! We had to take the shuttle train to the baggage carousels, where we waited and waited and waited for our final bag to arrive. There was a chap next to me who said that they had also lost two suitcases, and that he and notified an Alaskan Airways member of staff. I chatted to him for a while until his wife returned pulling the two now-found suitcases. Apparently they had been put on the wrong flight! Ian went off try and track down our bags and minutes later, he too returned with our final bag slung over his shoulders. Hurrah! Ours had been sent to the “unusual size” luggage carousel.

With the help of a trolley, we went up and down, twice, to the hotel shuttle bus section and found our bus which was already at the stop. Perfect timing! Cornelia charmed the driver, Faisal, and sat chatting to him as he drove us to the same airport hotel we’d stayed in previously.

Our room is next to an ice machine again. This is something I keep forgetting to mention. Almost every hotel room we’ve had has been the one closest to the lift and/or the ice machine. It doesn’t seem to matter if we check in early or late, it’s always that room!

We plonked down our stuff, had a quick change and the obligatory “spin on the chair” and went out to the Sharps Roasthouse for dinner, which was just across the road and received pretty good reviews on Trip Advisor. Cornelia instantly approved, as she was given some crayons and a kid’s menu with a maze and a couple of games to complete, but even more so because she reckons of those foam model aeroplanes that you need to put together. She loved it! Presumably the restaurant knew that she wasn’t just going to sit and look at it as it went whizzing around various tables…!

The meal was really good. I had an avocado, beetroot and orange salad with chicken, and Ian had a pulled-pork burger thing. Cornelia ate all of her fish and chips, and included in her meal was a “sparkle spun sugar dessert”. When it arrived it was literally a glass full of candy floss! She’s never had it before and I’ve always said “No” when she’s asked for it, but I couldn’t say no this time! She started exploring it by squishing it so that it became hard, then eating it, working her way up to tearing off a big chunk and shoving it in her mouth! She loved it! Oh no!!!!

It disappeared pretty quickly and we sang Mary Poppins songs on the way back across the road. When we were back in the room, Bugsy said she didn’t want a bath as she just wanted to go straight to sleep.

We had a quick aeroplane competition to see who could fly it the furthest (Ian won, of course!) before it was scrubbing teeth time and then story time. She seemed pretty exhausted, but was still awake and wishing me a “Good night!” at 22:00! Where does she get this ability to fight sleep so well?!

One thought on “Spinning chairs and spun sugar in Seattle”