Unsurprisingly, Cornelia did not wake up until very late this morning. I started banging around at about 10:30, and she started to stir, and then she waddled into our room with a great big smile on her beautiful face to say good morning. By this time, Ian had gone on a hunt for breakfast stuff, and returned with milk, juice and Raisin Bran. The orange juice was $9… It may have been cheaper to eat out! Anyway, we are in Vegas and money will be spent! 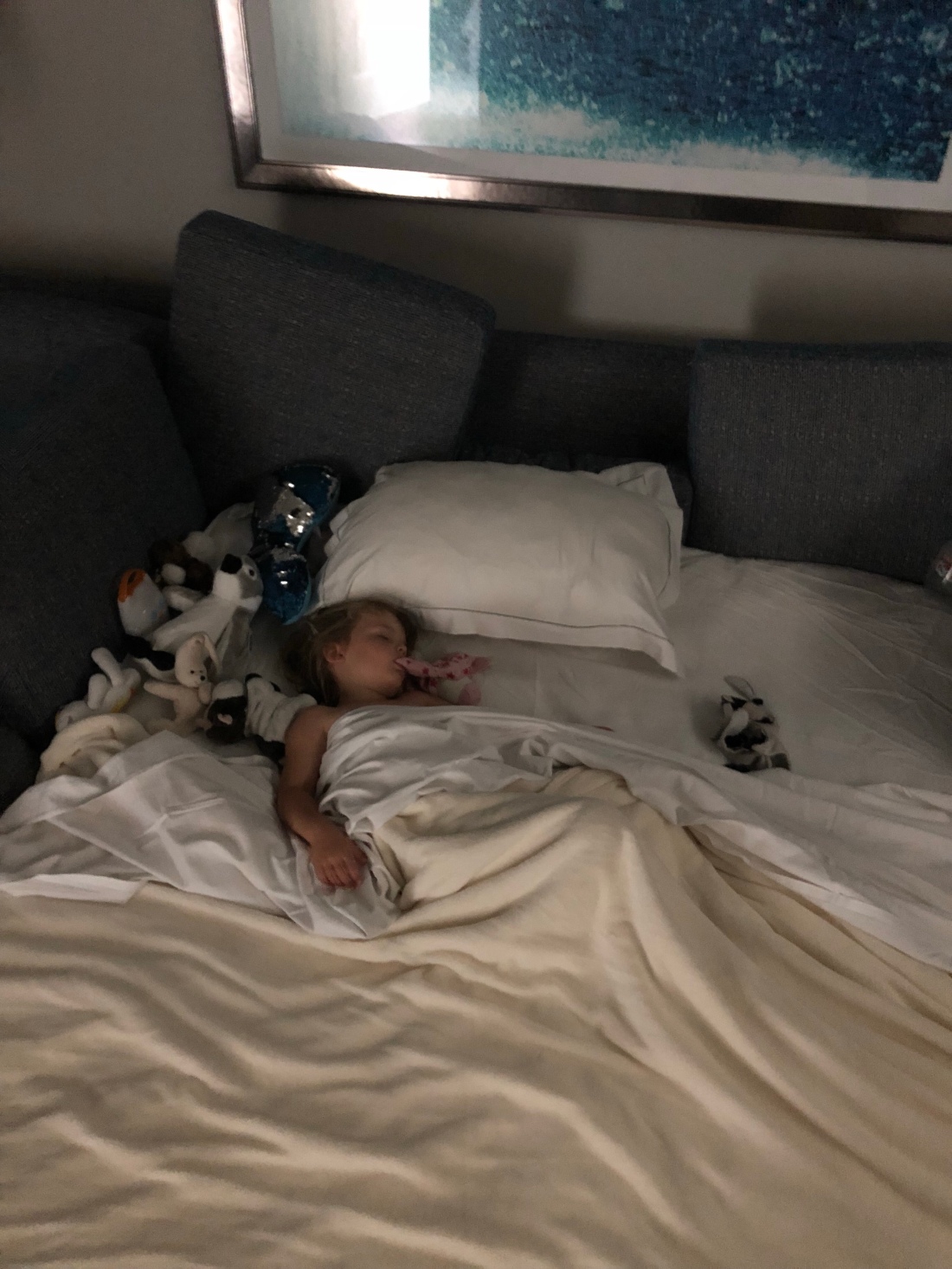 Once she was dressed, we had breakfast together, and had a little discussion about our plans for the day. Bugsy wanted to go straight to the pool, but with a promise that we would do that later in the day, we set off to investigate the “welcome pack” that we had been told to collect and the babysitting services that they offer. 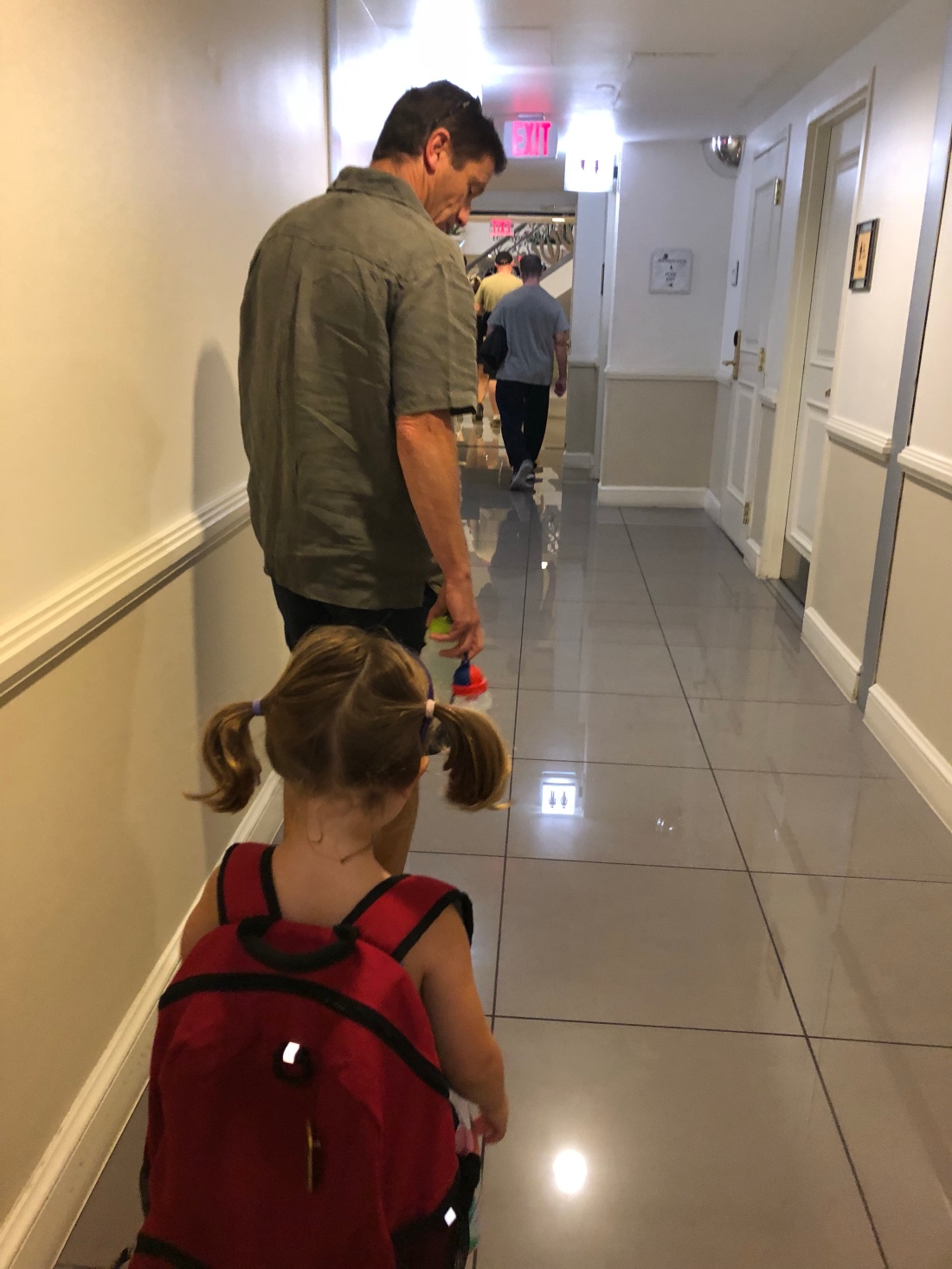 The welcome pack was an envelope full of vouchers and the concierge was quite possibly the most unhelpful person we’ve met all trip! Having been directed to the concierge who could help us arrange babysitting…:

“Hi, are you able to help me arrange your babysitting service for tomorrow, please?”

“We don’t arrange babysitting. You do it yourself. Use Nannies & Housekeepers.”

“Oh, okay, how would I go about organising that?”

“You need to call them.”

“Okaaaay. Do you have a number for them, please?”

“Thanks. Do you know roughly how much they charge?”

“No. I couldn’t give you an exact figure.”

“You know, I couldn’t really give you a figure. You’d have to ask them.”

Me to Ian: I don’t think they really organise babysitting here, do they?!

Having wasted twenty minutes not achieving anything, we walked around the corner to Circus Circus, where we were able to take in some free shows. We had to walk through the enormous halls filled with loud, gaudy gambling machines, before finding a seat at the small stage to watch an acrobat perform some great tricks using one, two and then three diabolos. The show lasted about fifteen minutes and we enjoyed it, sitting there munching popcorn! 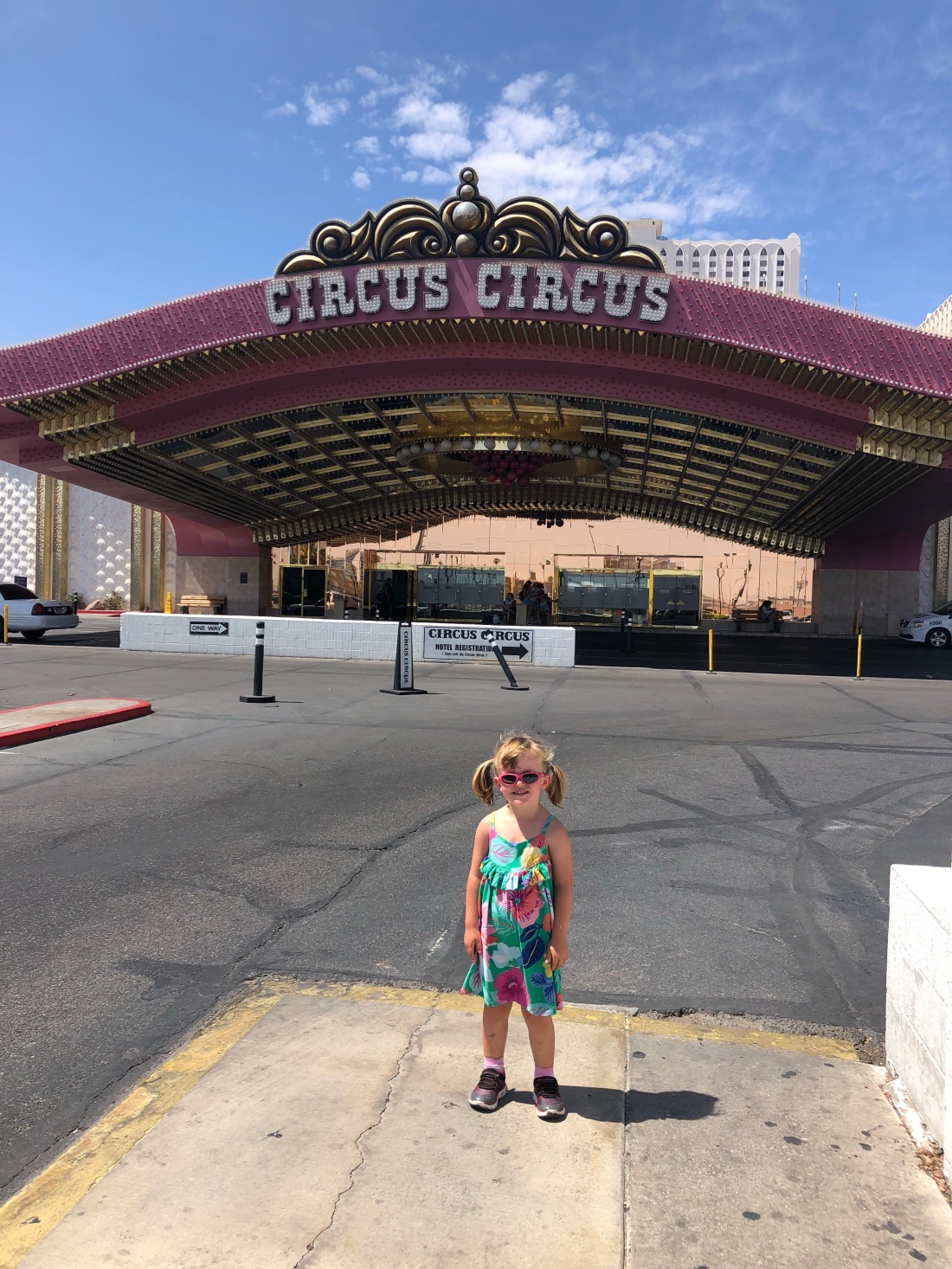 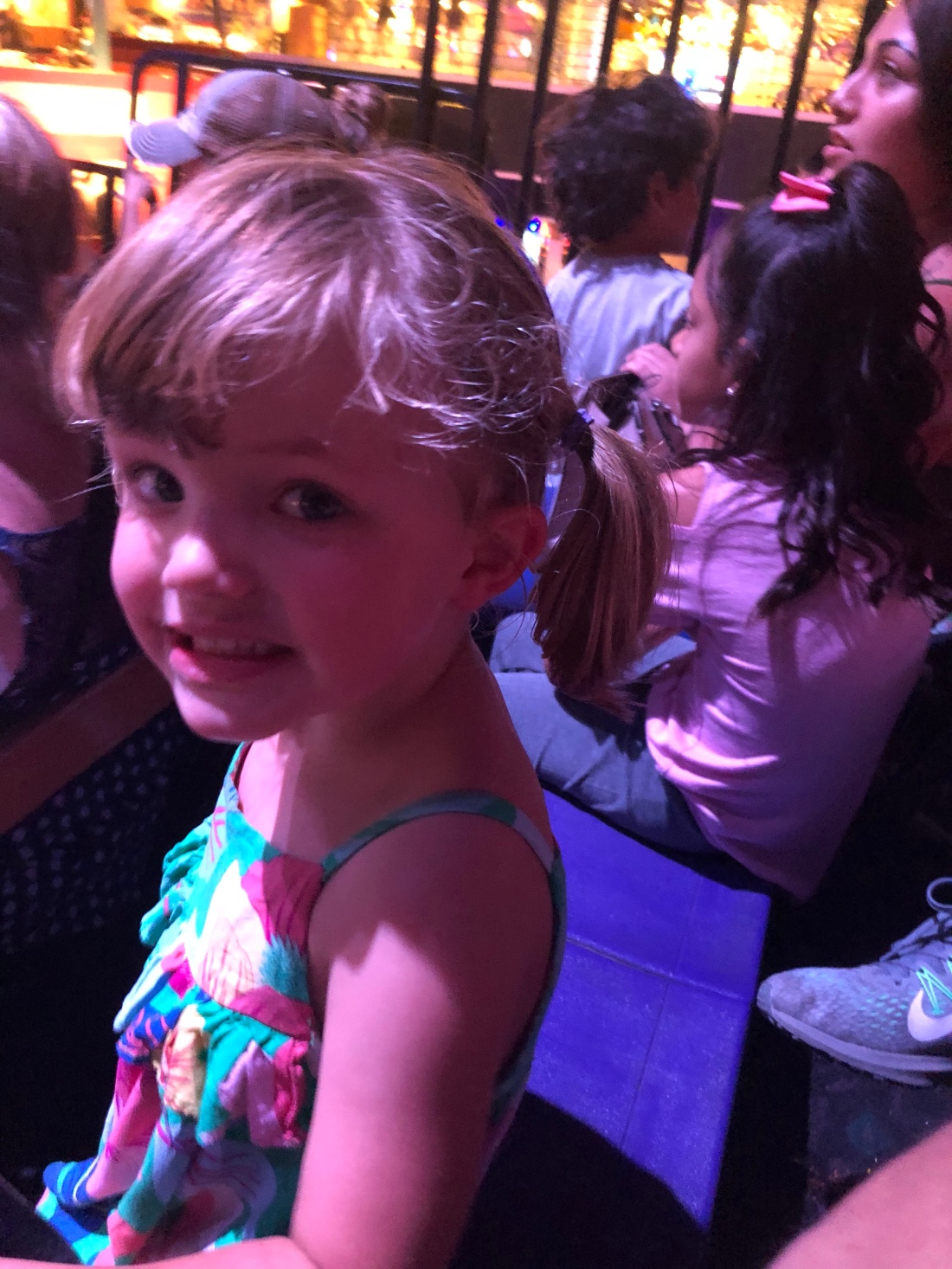 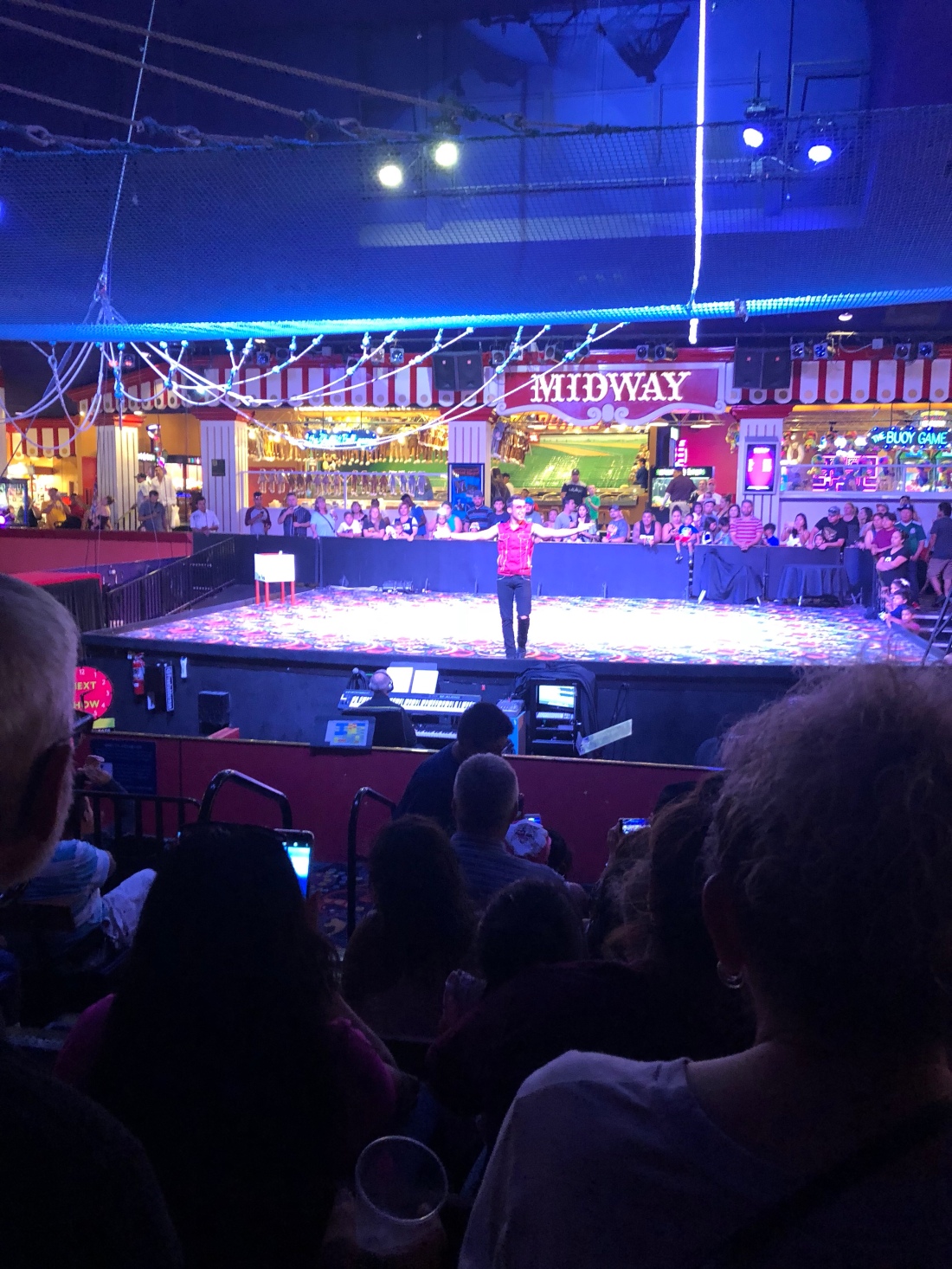 There is an amusement park at Circus Circus too, and Cornelia and I both bought wristbands so that we could go on the rides as many times as she wanted. Which turned out to be quite a lot!! She was tall enough to go on four rides by herself and I took her on four others that needed an adult accompaniment. She had an absolute ball! My cheeks were aching from smiling at how much she was enjoying herself! Her and Ian wanted me to go on the double loop roller coaster, much to my horror, so of course I went and endured three minutes of being banged around and spun upside down! It wouldn’t have been so bad if I hadn’t been massively dehydrated, something I hadn’t appreciated before the ride, but I ended up with a stonking headache afterwards, cured only by necking a couple of bottles of water! 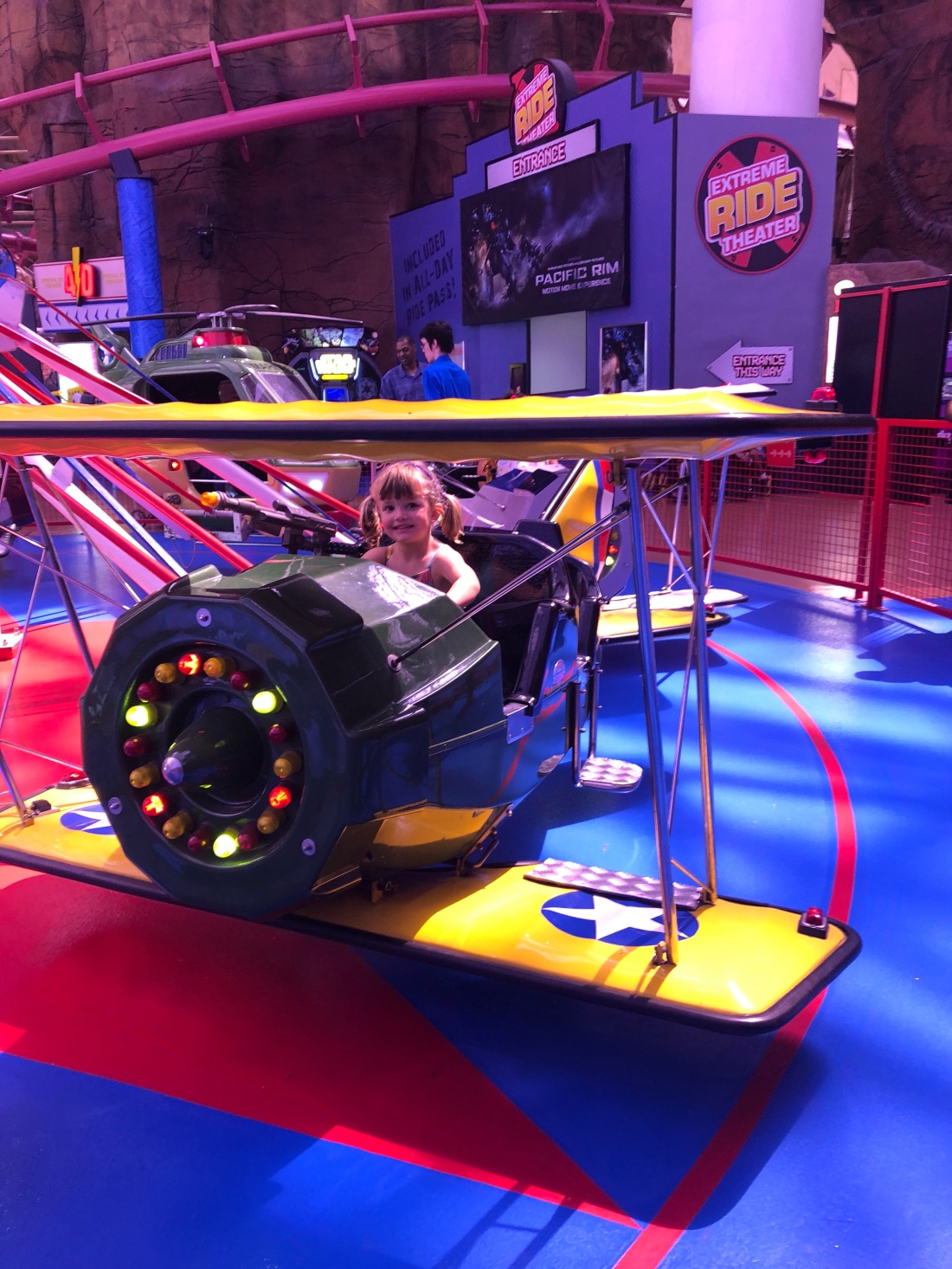 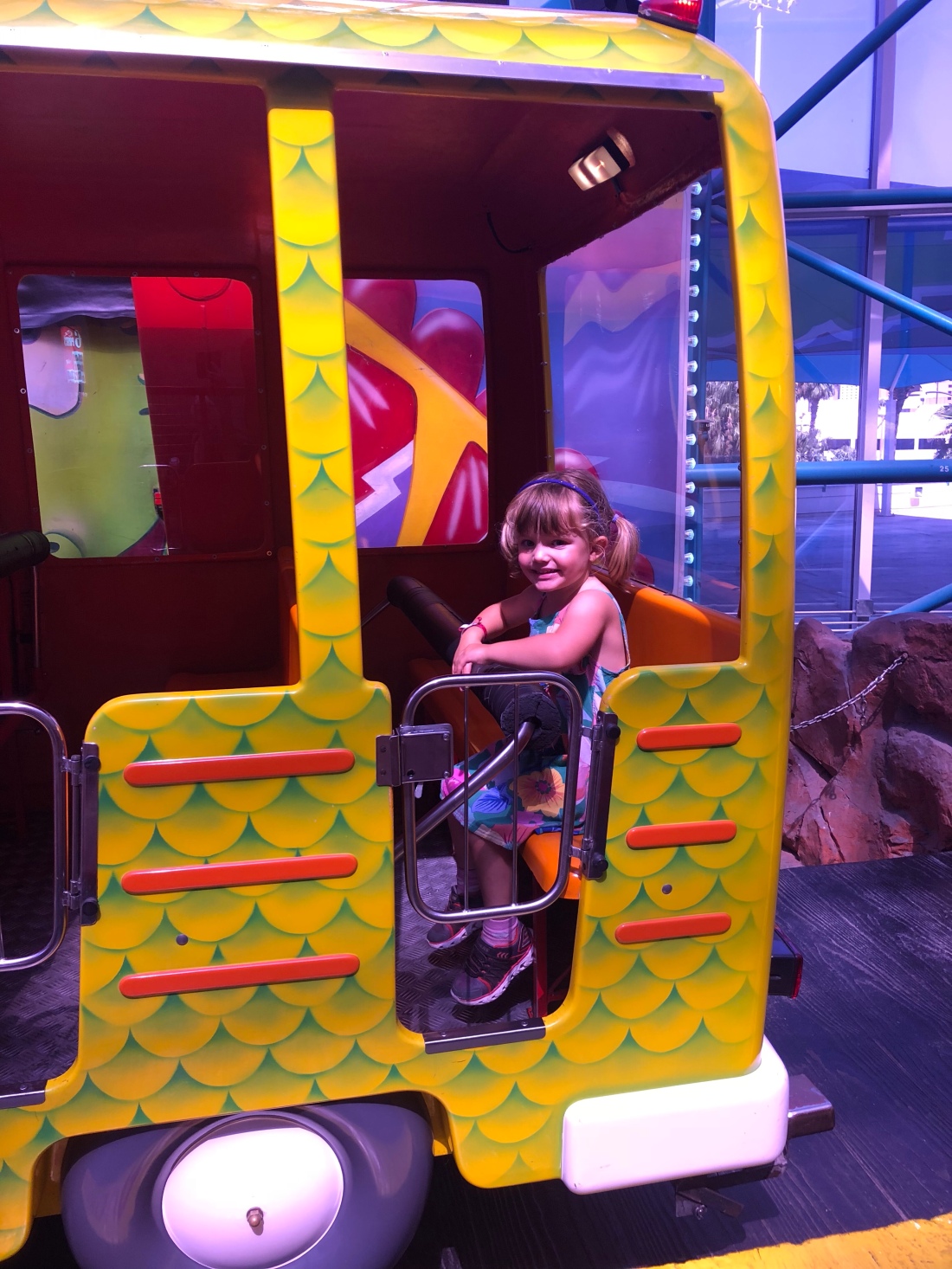 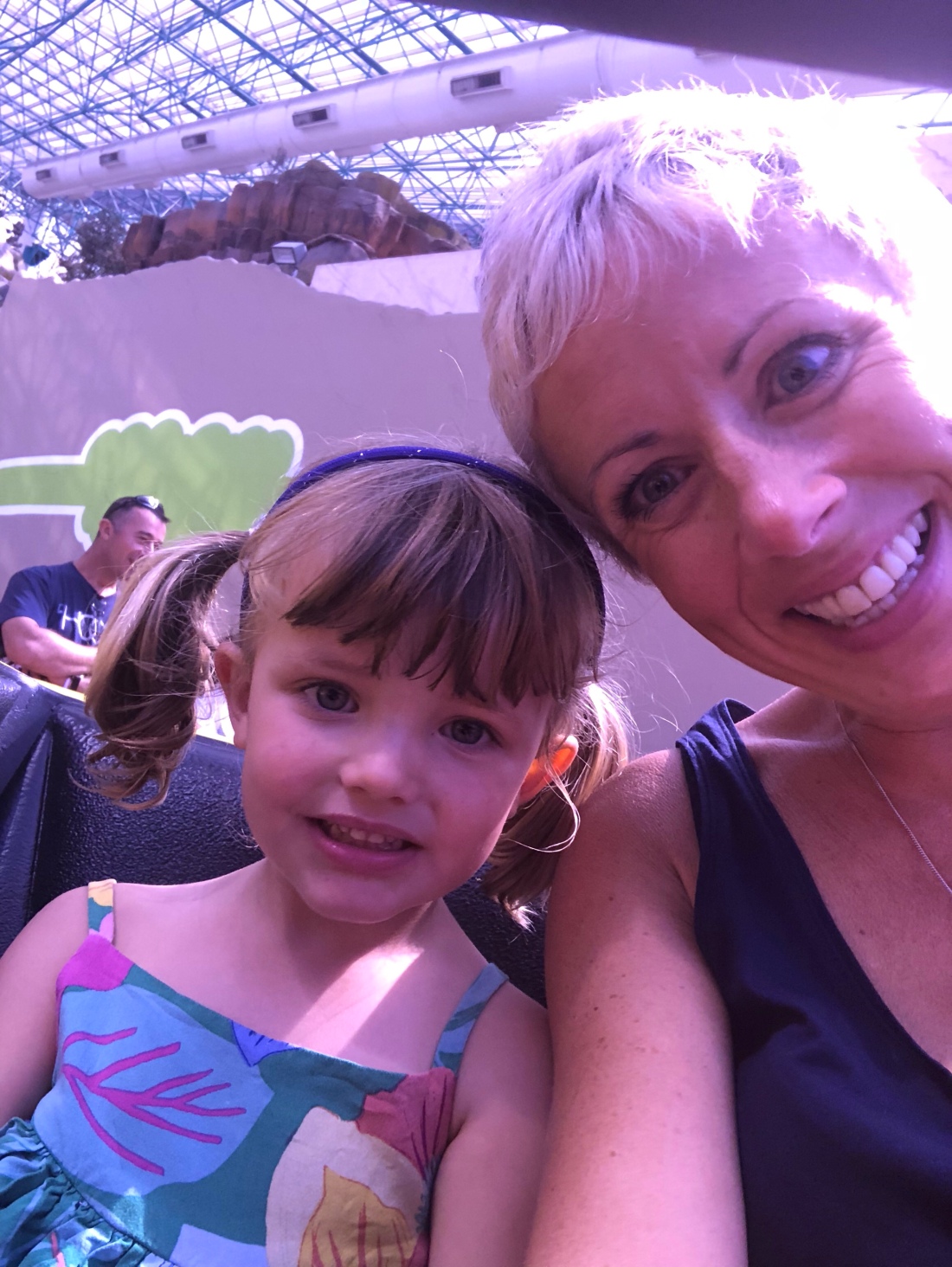 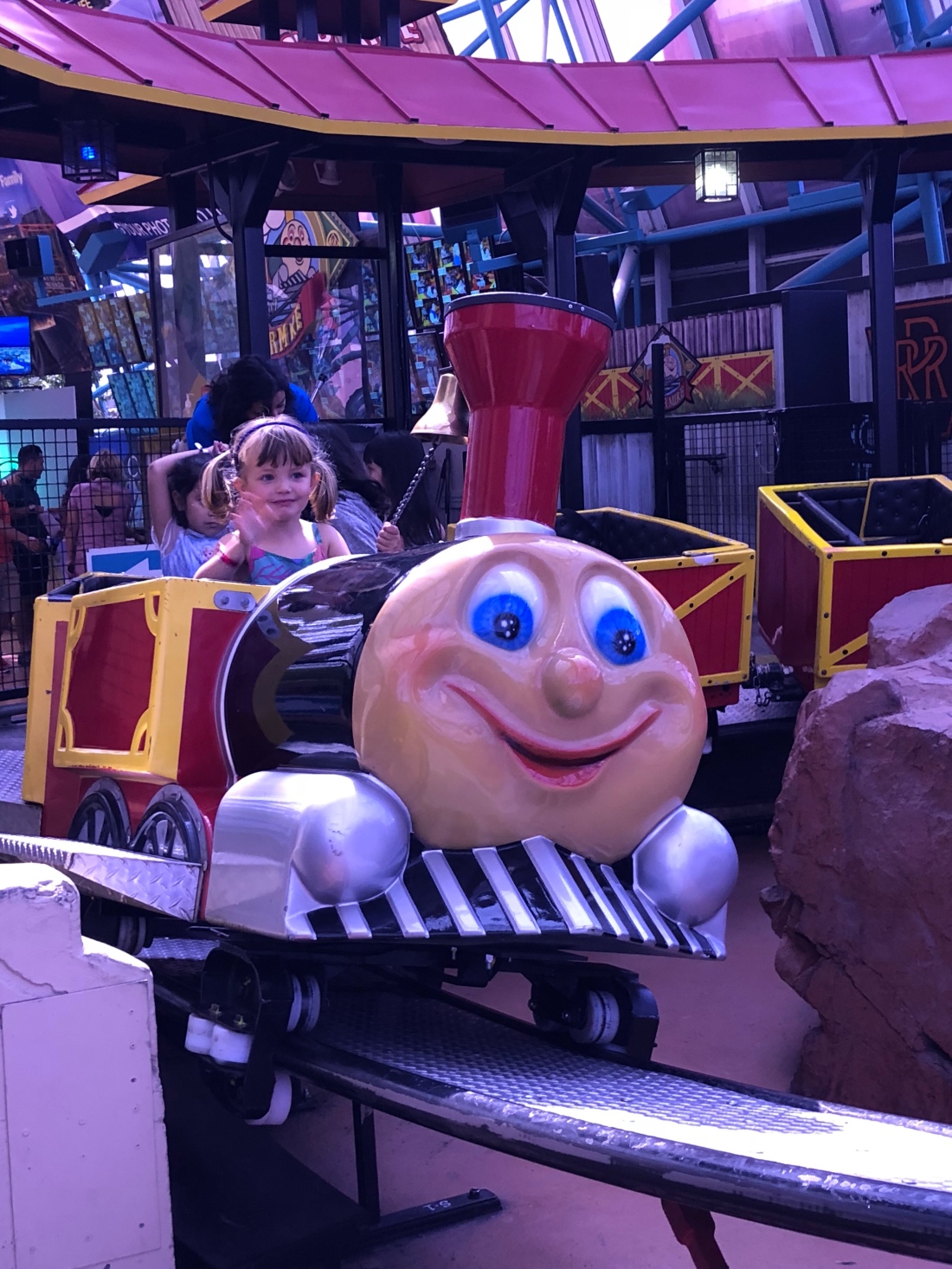 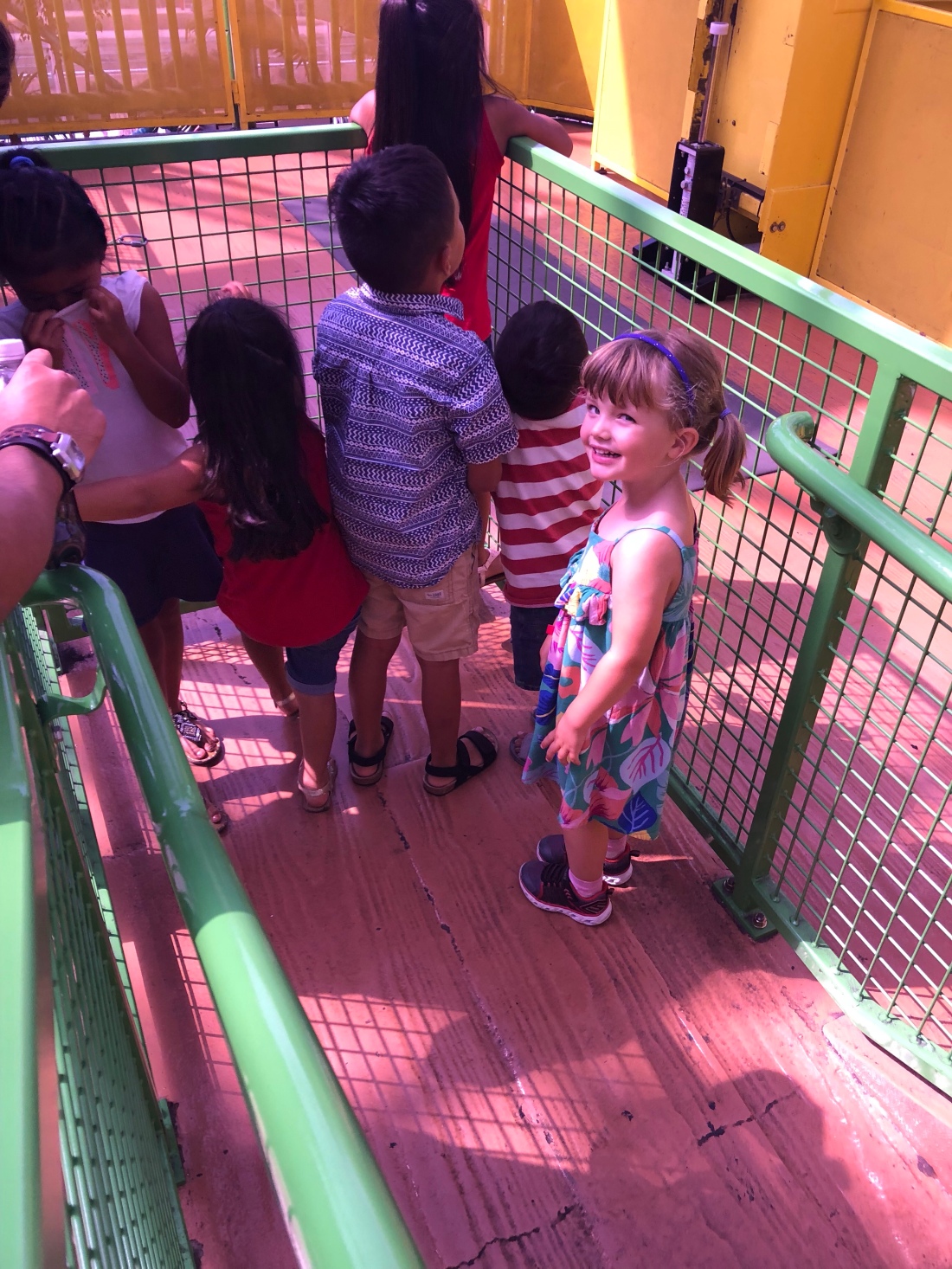 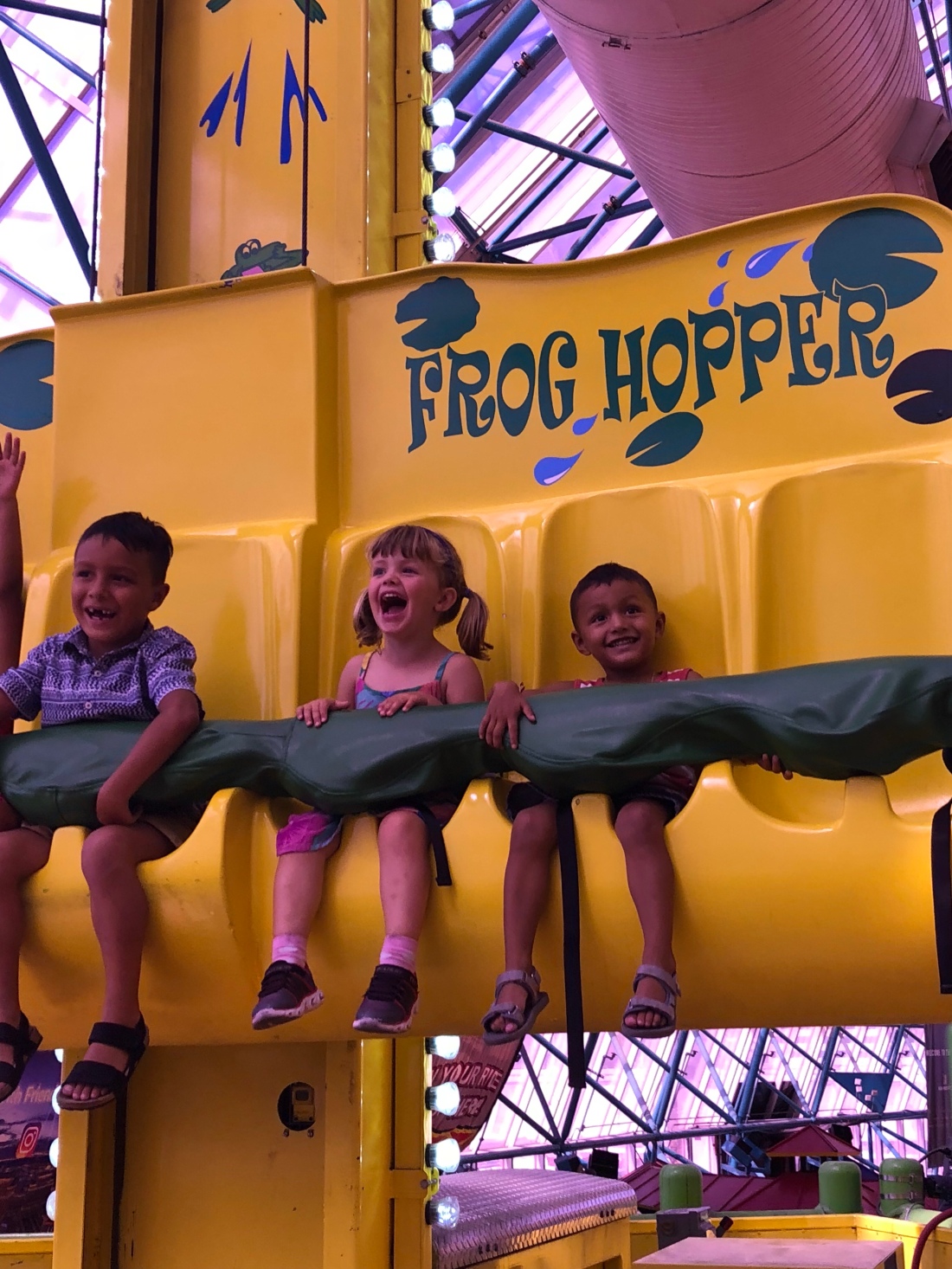 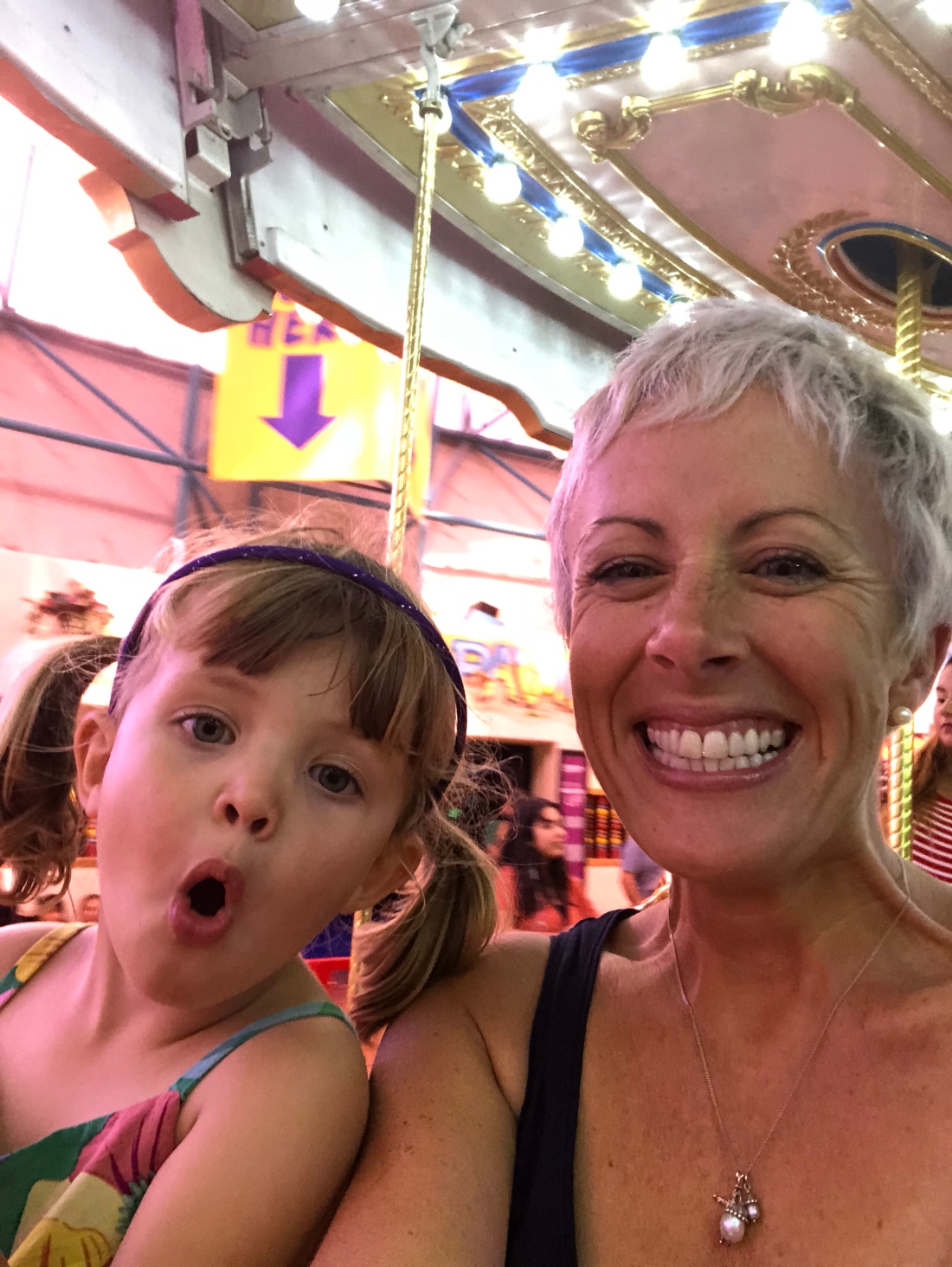 By the time we had exhausted all the rides, Ian was very hungry and we went to one of the (not so fast) food outlets adjoining the casinos. I wasn’t at all hungry, and Cornelia had a grilled cheese sandwich, while Ian ordered the chilli burger special. I took myself off to the pokey machines and turned $20 into $25 and then into $0! As Bugsy put it perfectly: “Are casinos where silly people go to throw away their money?!” 😳 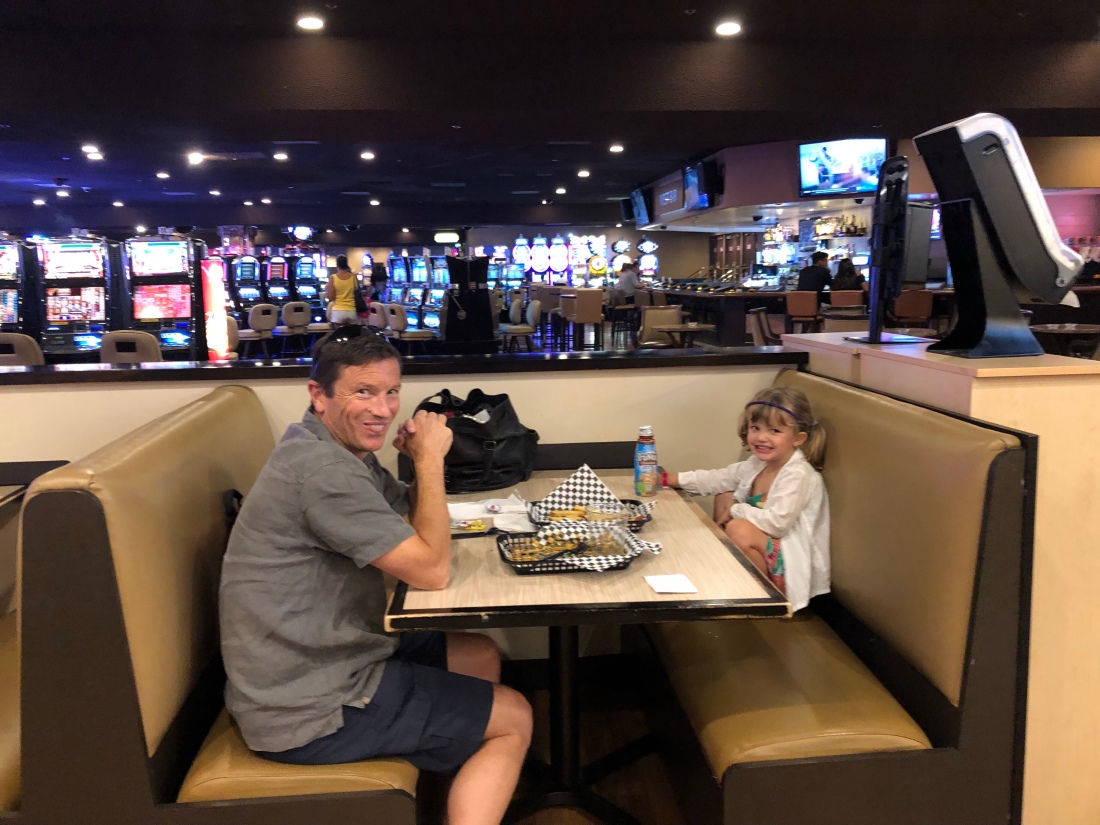 Once I’d lost my $20, I returned to the cafe, only to find that poor old Ian was still waiting for his meal to arrive. He went up to investigate at the same time as another couple of blokes from a family who had ordered at the same time as us went to query the whereabouts of their food. Chaos ensued… there were about four members of staff all accusing each other but getting absolutely nowhere in terms of getting any food served. The two guys asked for their money back and Ian just asked that they give him his food asap. And as if by magic, all the meals suddenly appeared. Sadly, Ian said his wasn’t worth the wait, but he was so darn hungry he scoffed the lot anyway!

As part of the wristband deal, we were able to go and watch a short 4D movie, and the one we went to was Ice Age, featuring all the characters from the original movie. Cornelia sat nervously wearing her oversized 3D glasses, covering her ears and jumping in all the right places as we were blasted with jets of air (replicating arrows that were being fired on screen) and covered in bubbles! It was a fun experience, although Bugsy seemed a bit baffled by it all!

Ian and Bugsy headed back to the hotel and I went off in the other direction to find some food and beer, and made it to a 711 in the dry and dusty heat! I bought everything I thought I’d need for dinner, then went back to the hotel, bumping into Ian and Cornelia in the corridor on their way to the pool. 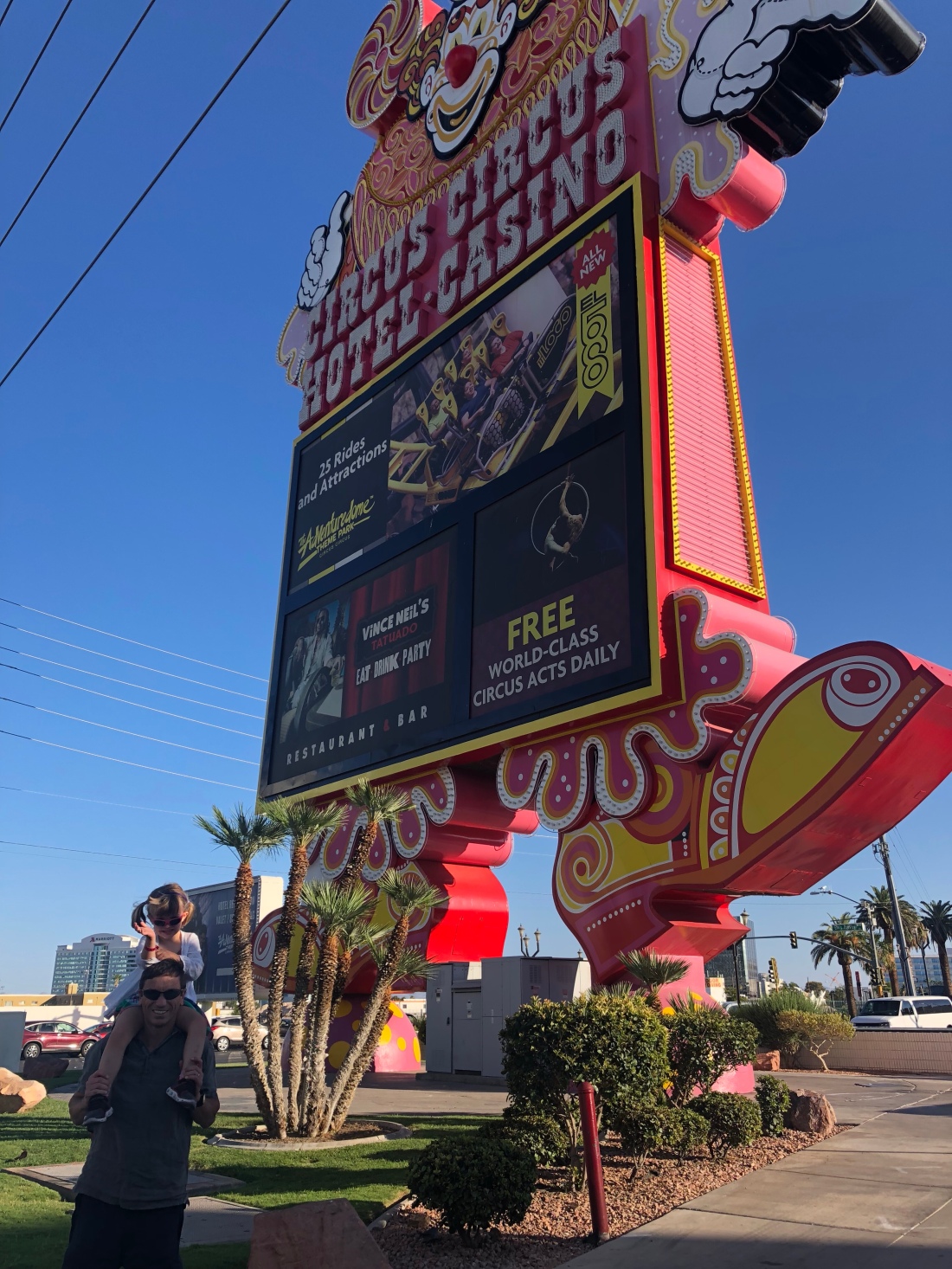 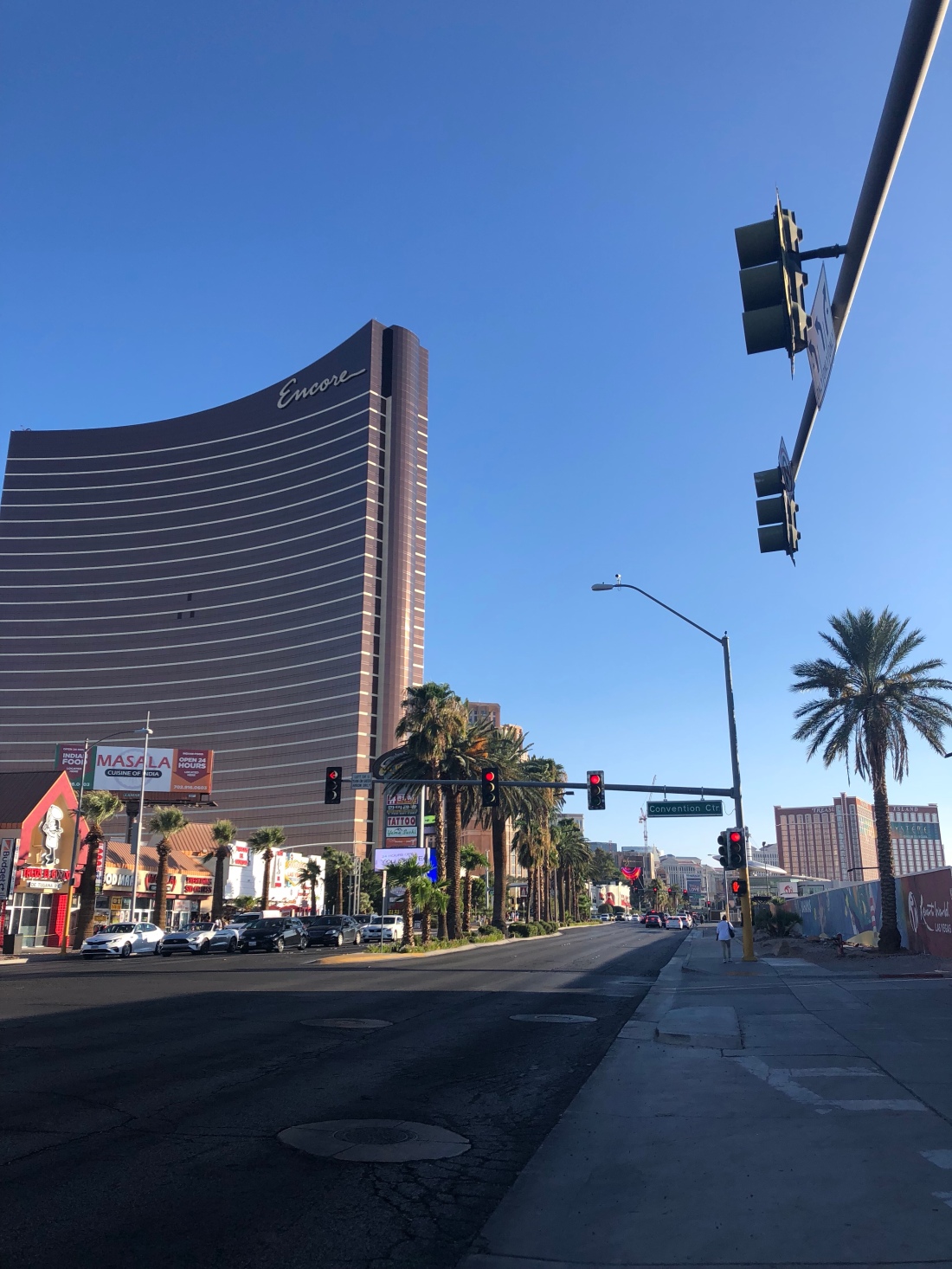 I unpacked the shopping quickly, then joined them poolside. It was like standing under a giant hairdryer, with the hot wind blowing. As it turned out, I didn’t need to get in the pool as she’d had plenty of fun in there, but was ready to make her DVD rental choice (Peter Rabbit) and settle down for the evening. 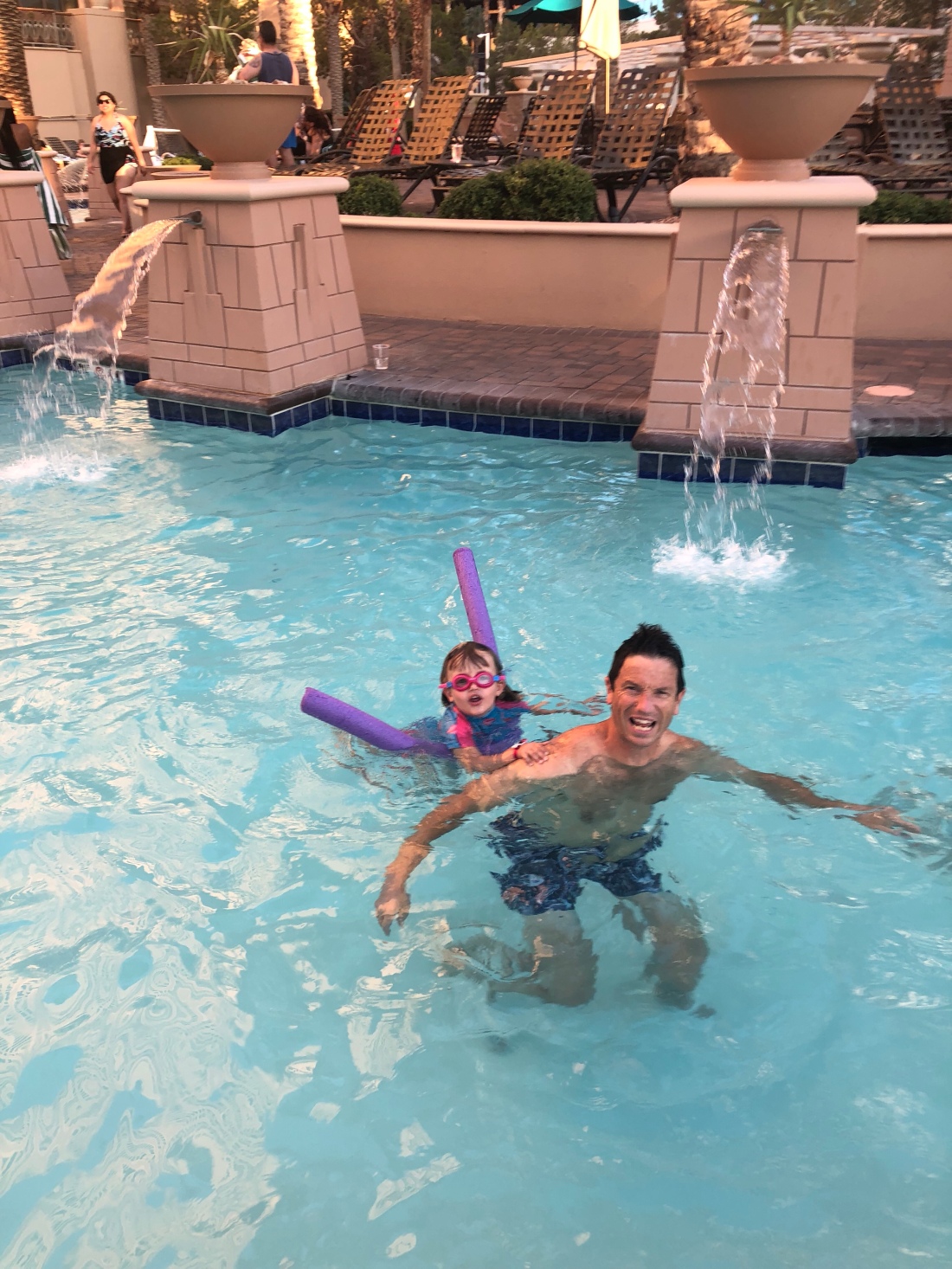 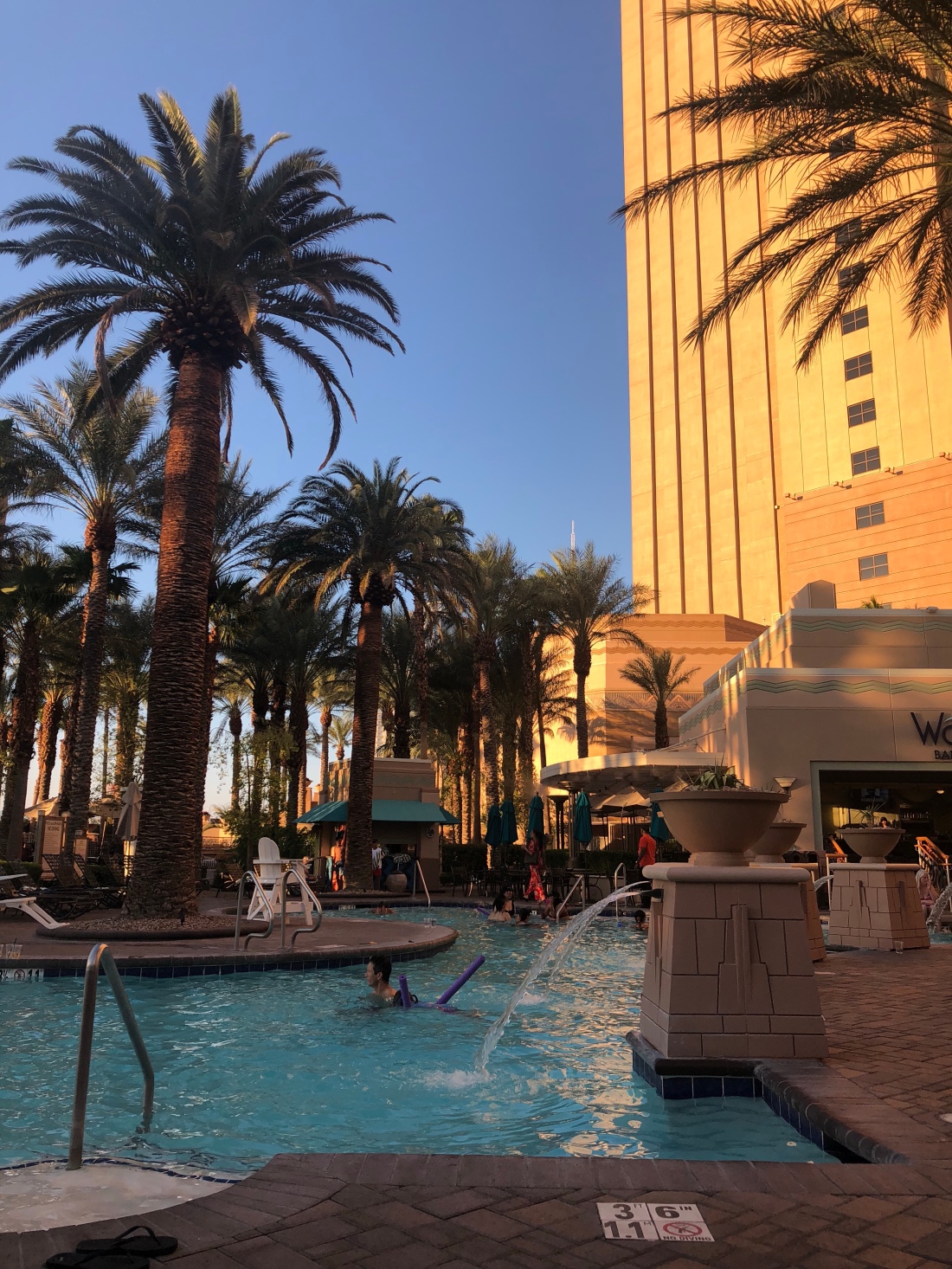 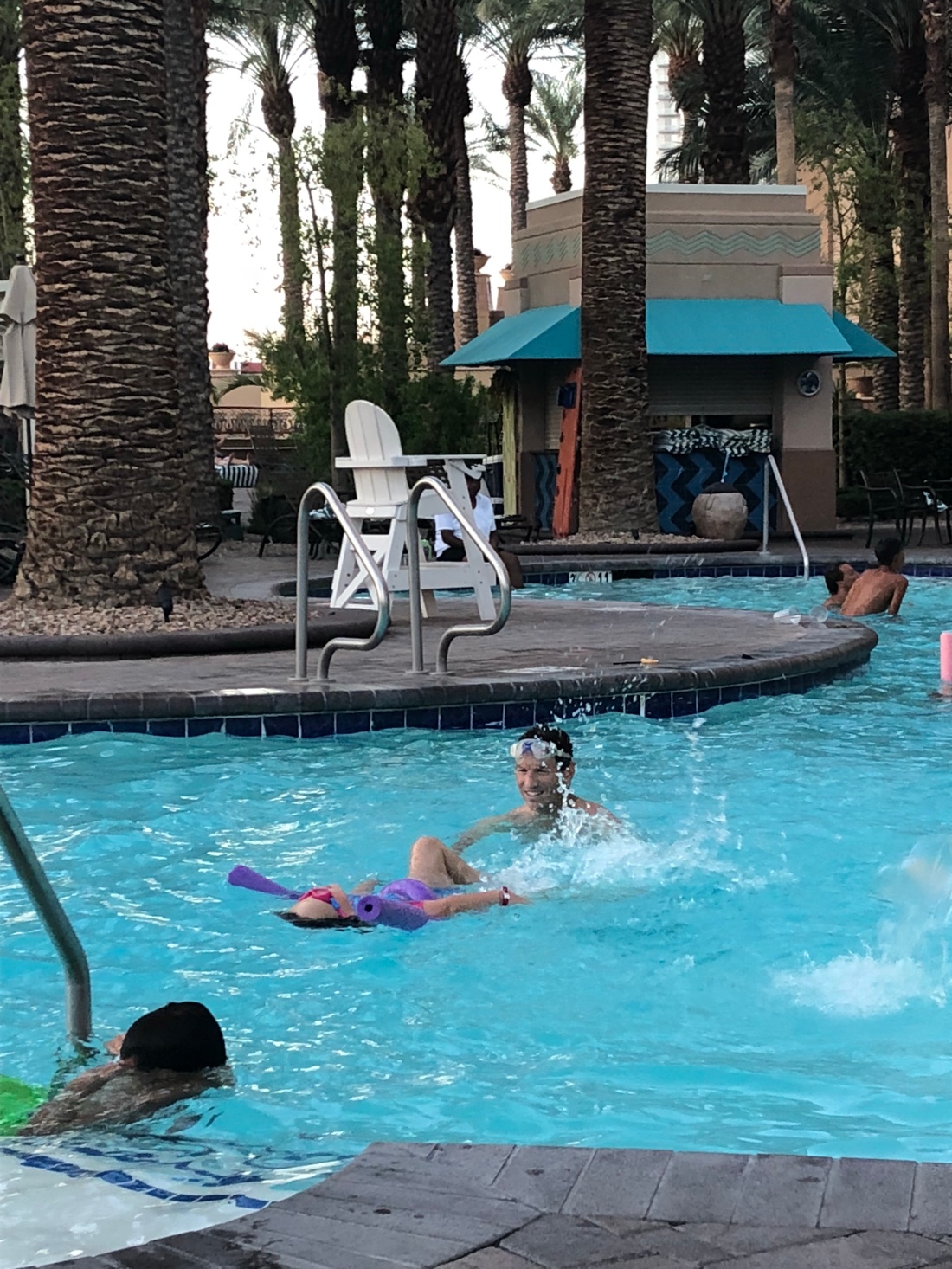 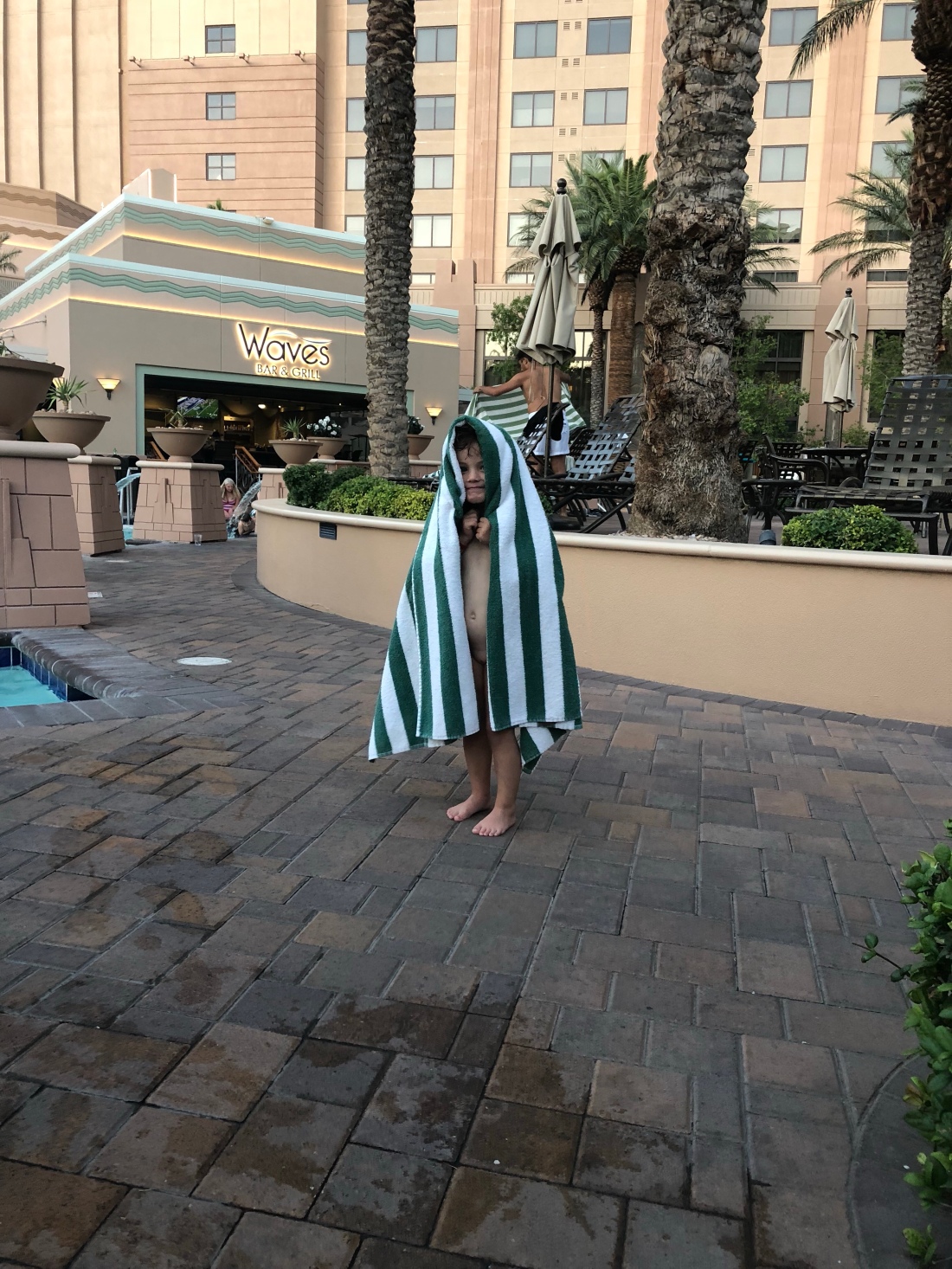 As Ian and Bugsy watched the movie, I made tea (a frozen Birds Eye chicken and pasta mix) and rang housekeeping to ask for a can opener to open the sweetcorn I was adding to the meal. Thirty minutes later it hadn’t arrived, so I called again, only to be told that whoever had said “I’ll bring it right up” had now finished their shift and hadn’t left any notes for their replacement. Grrrr… anyway, he said HE would bring it right up and sure enough, within five minutes, I was able to finish preparing our tea. Unfortunately, the meal was quite peppery and Cornelia finds it much too spicy, so we ended up ordering some room service chicken nuggets. 🙄 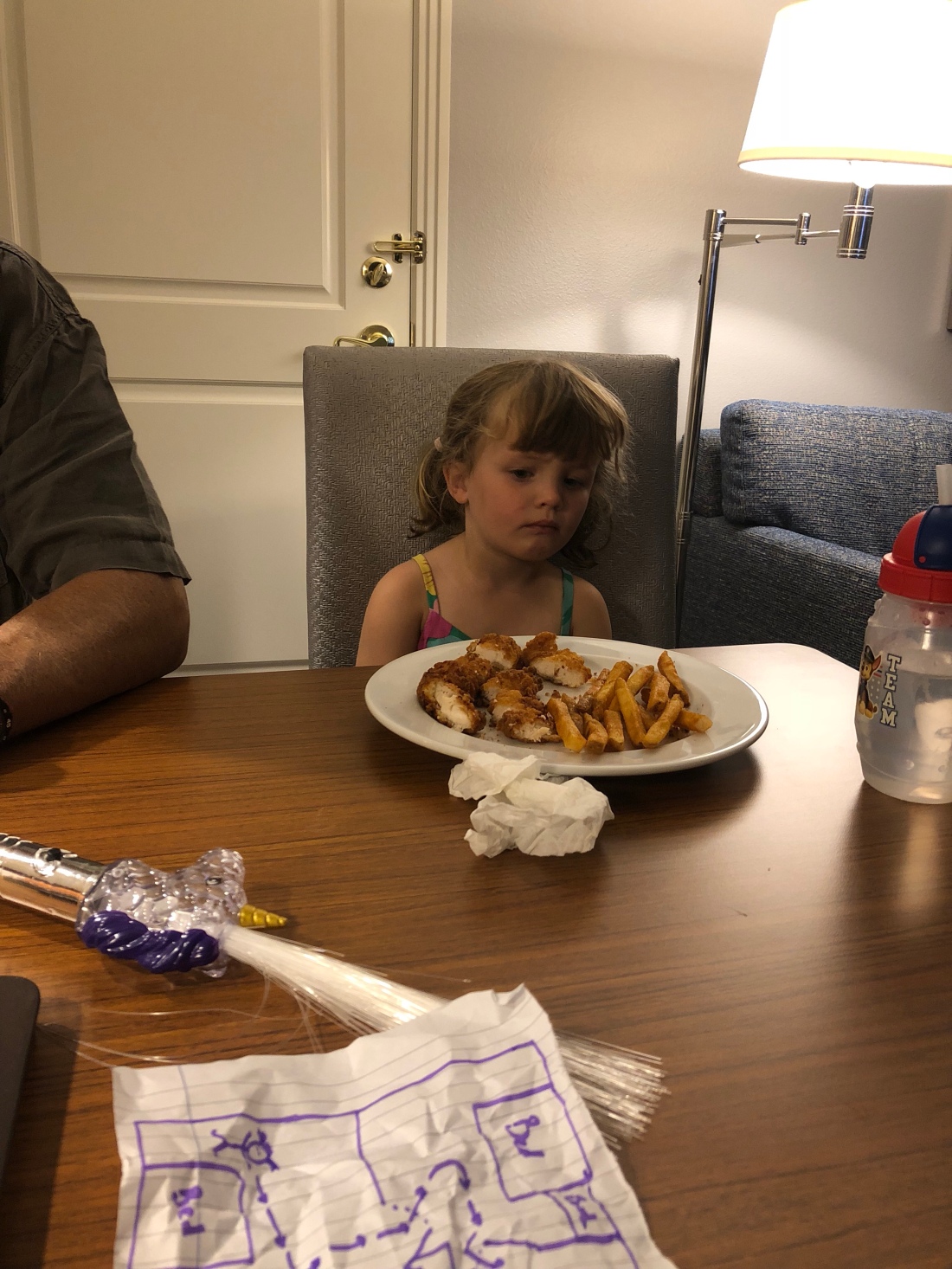 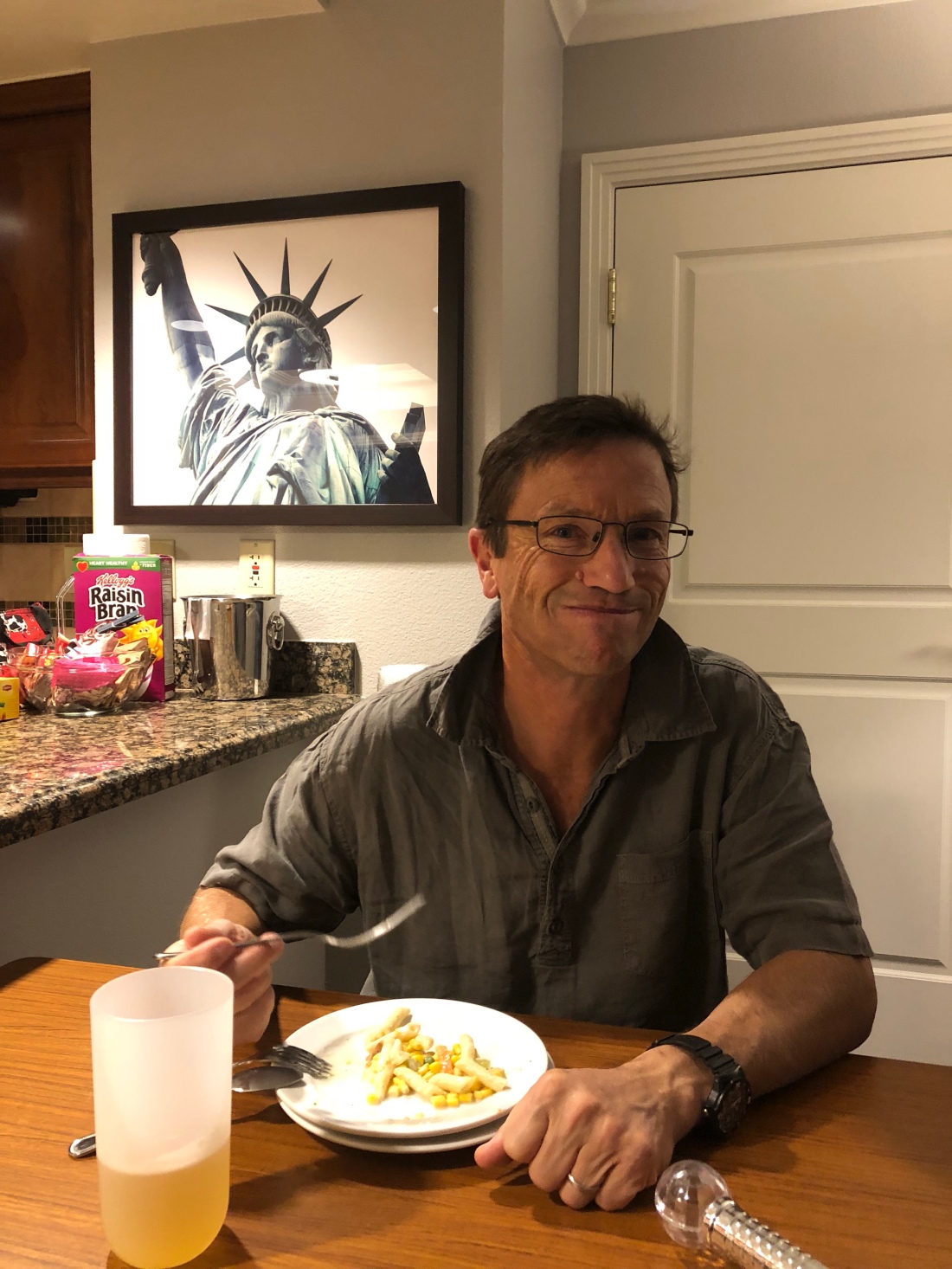 Once the movie was over, she had a quick bath and her bedtime story, requesting some extra snuggles before settling down for the night. Having stuffed our faces already, Ian and I decided to lighten our suitcase load by devouring the four ginormous truffles that I’d bought in Alaska! (One was peanut butter, the other huckleberry.) They were delicious but two each was probably too much for us and we fell asleep with very big tummies!!

4 thoughts on “Circus fun in Vegas”