There was no early morning wake-up call for us this morning, despite the ship docking at Skagway at 06:00. Cornelia had an epic sleep, sleeping in until nearly 10:00. So a 13 hour sleep must mean she will be positively angelic today! 🤞🏼 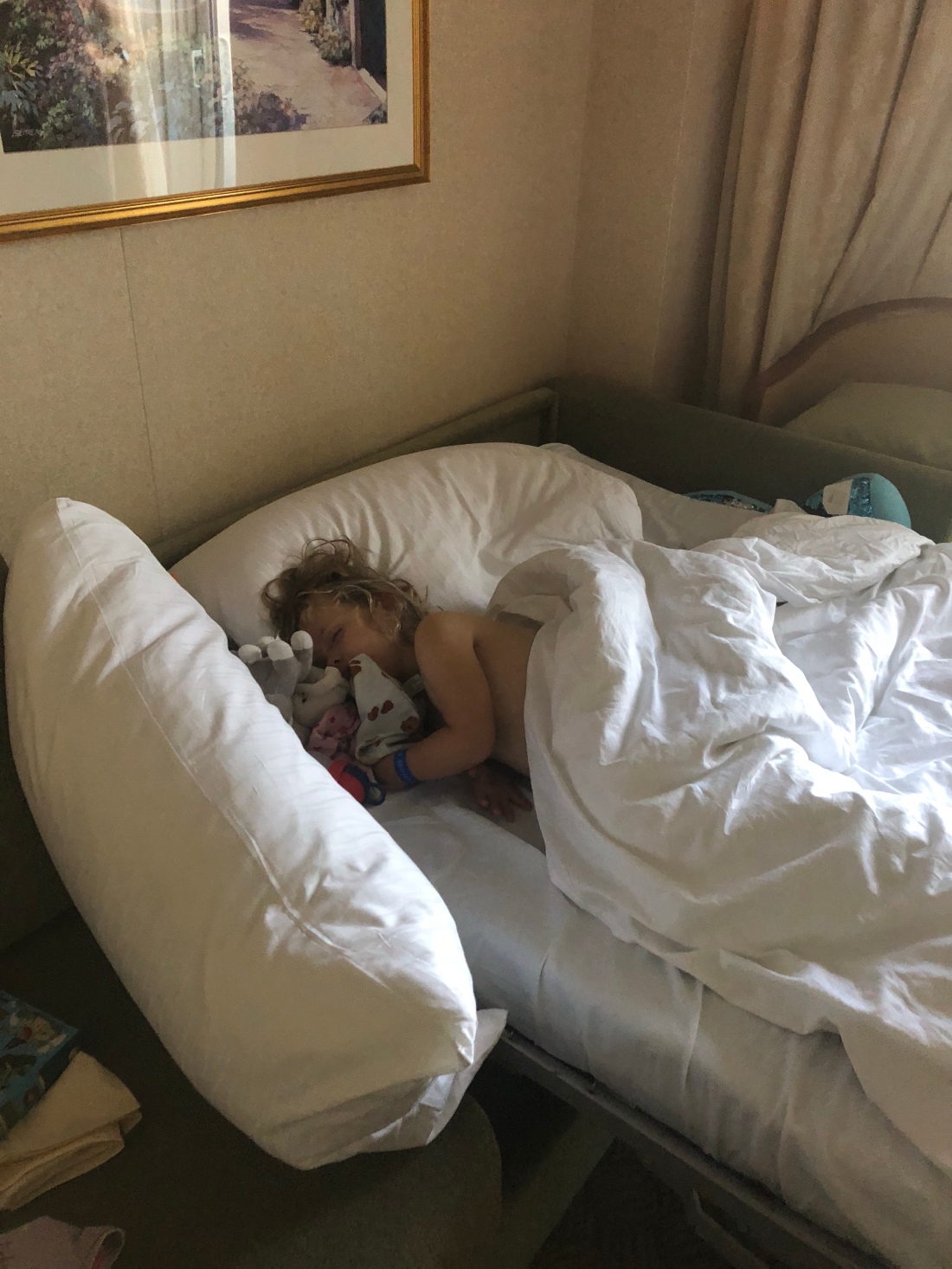 The late riser meant that we had a very late breakfast but our usual buffet zone was still open, and Bugsy’s long sleep had given her an excellent appetite and plenty of energy for our exploration of Skagway. She made friends with a waiter, who created various serviette items for her: a rose, a shoe, a mouse and a crown – all princess related! She loved it!

Skagway is a town which now solely exists for tourism. Tourists arrive, literally in their thousands, and I expect that 90% of the small population of the town (just over a thousand residents) serve that industry. Skagway was one of the “starting points” for the Klondike Gold Rush as 100,000 gold diggers headed for Dawson City, over the White Pass or Chilkoot Pass, a journey which saw only 30,000 people make it. They endured extreme suffering all in the name of greed and I can’t work out if I feel sorry for them or whether it is an excellent lesson to learn just what lengths people will go to for fortune. In the end, there was hardly any gold available and most returned home poor or lived out their days in the city pursuing other lines of work. The women seemed to have it right. One lady baked apple pies to sell to the weary travellers and made a fortune. Another brought cases of beautiful dresses with her and sold those, again making her fortune. 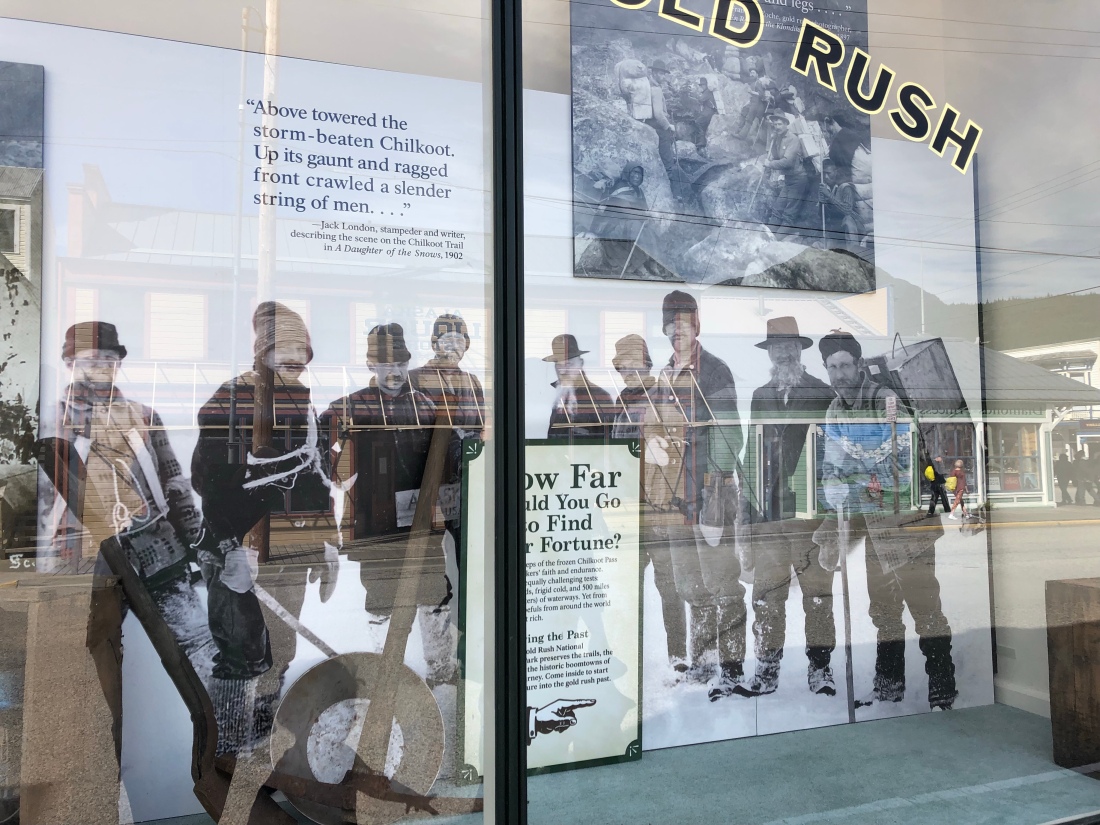 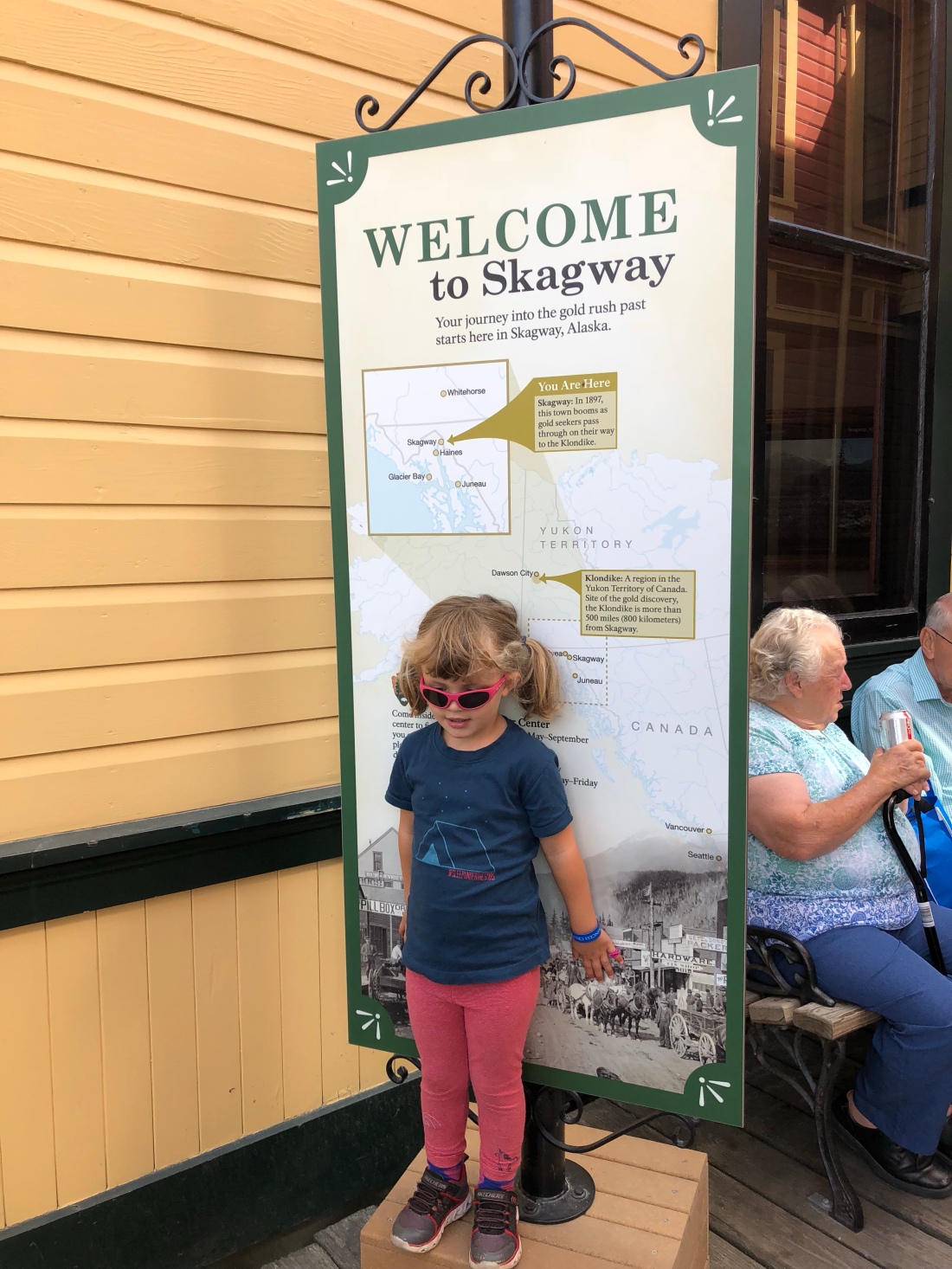 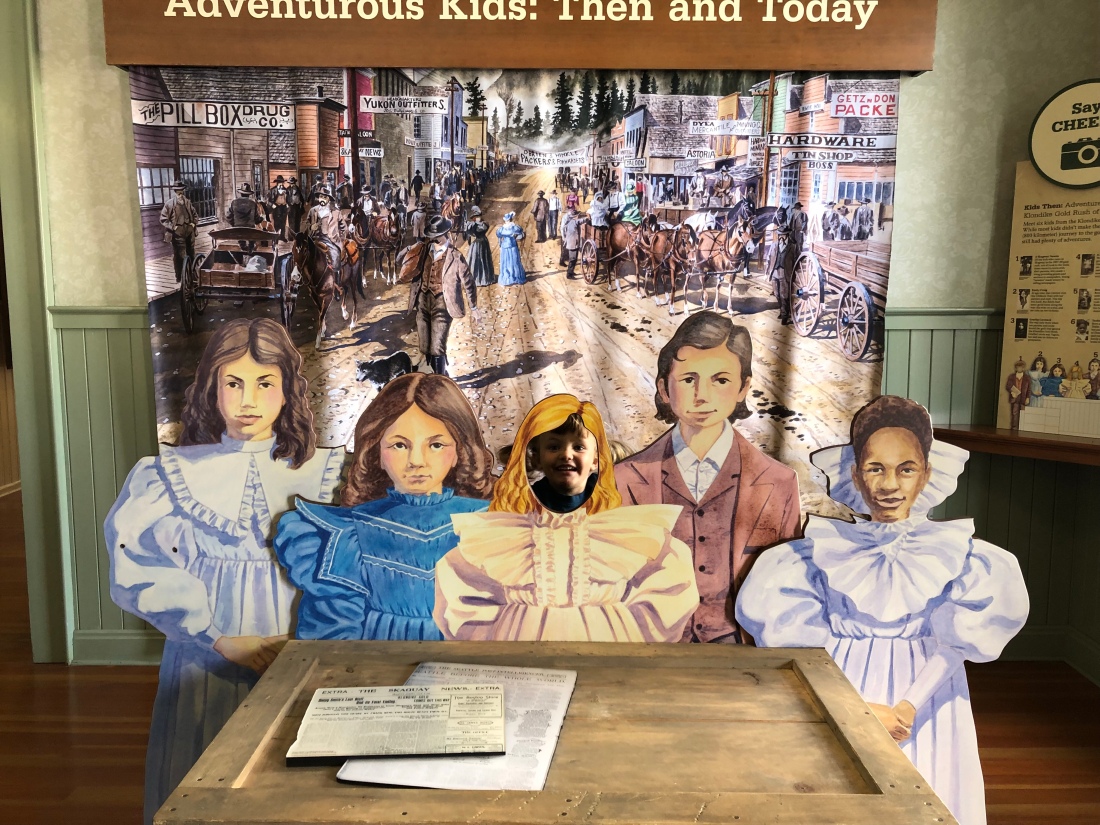 So, Skagway is kept alive by tourists now, but as we walked the streets, you get an absolute sense of how it would’ve looked 120 years ago, due to the great preservation, restoration and care that has been taken with the buildings. The Visitors’ Centre was a useful stop, as they showed a 20 minute film of the town’s history, and even Cornelia managed to sit through it! We then just wandered the streets, admiring the long “White Pass” train with Cornelia practising her “1, 2, 3, swing” a few too many times!! 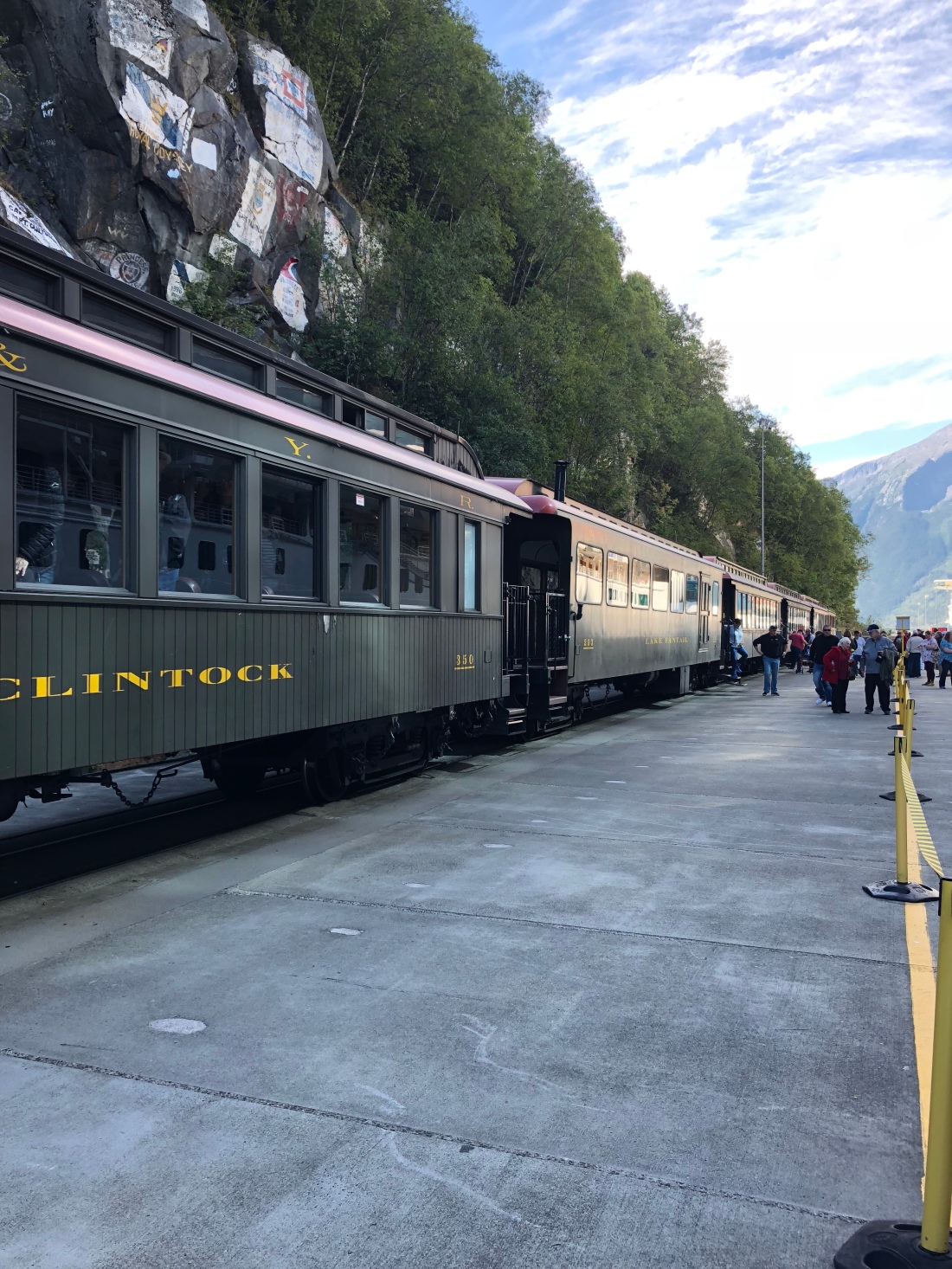 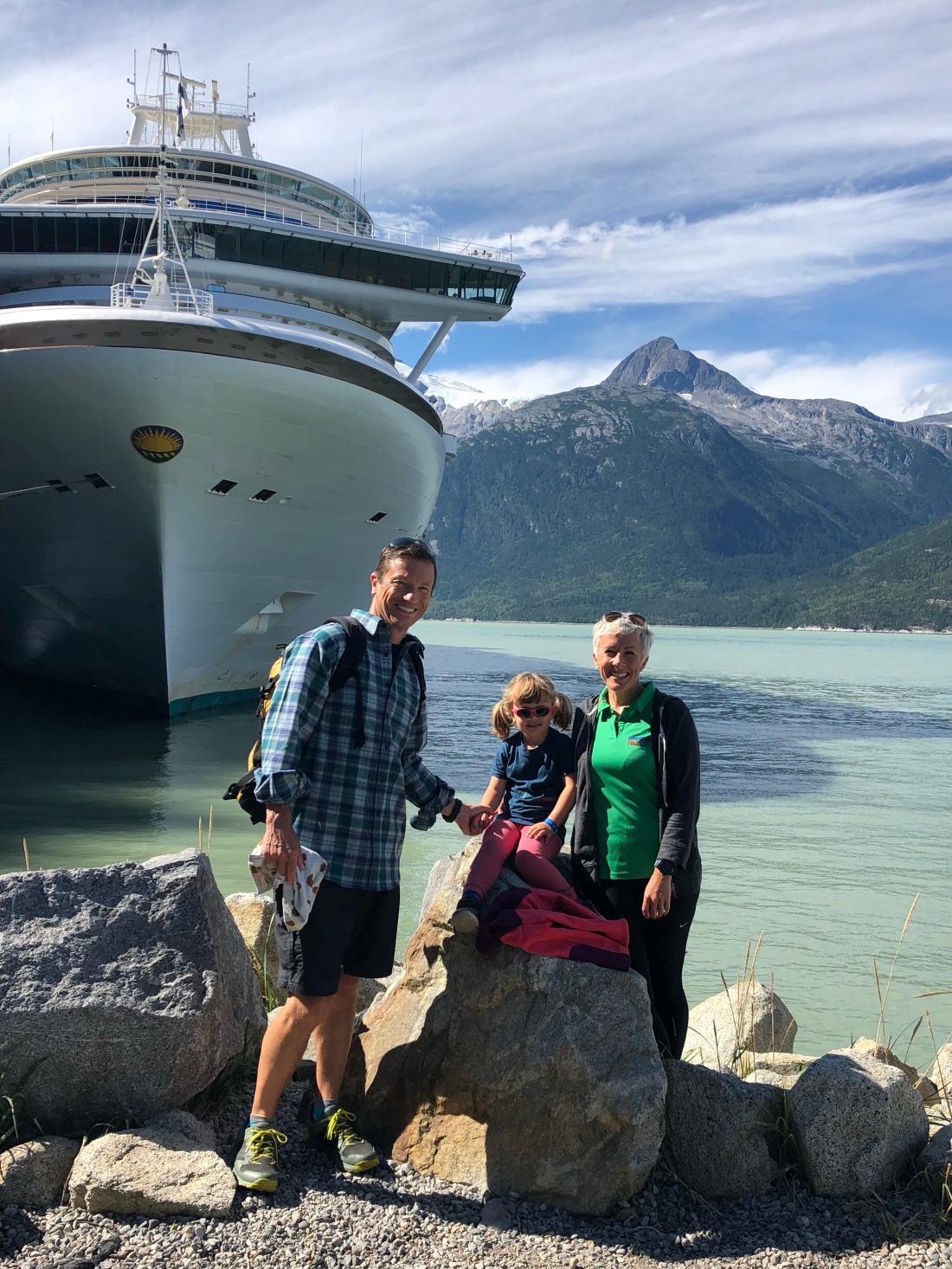 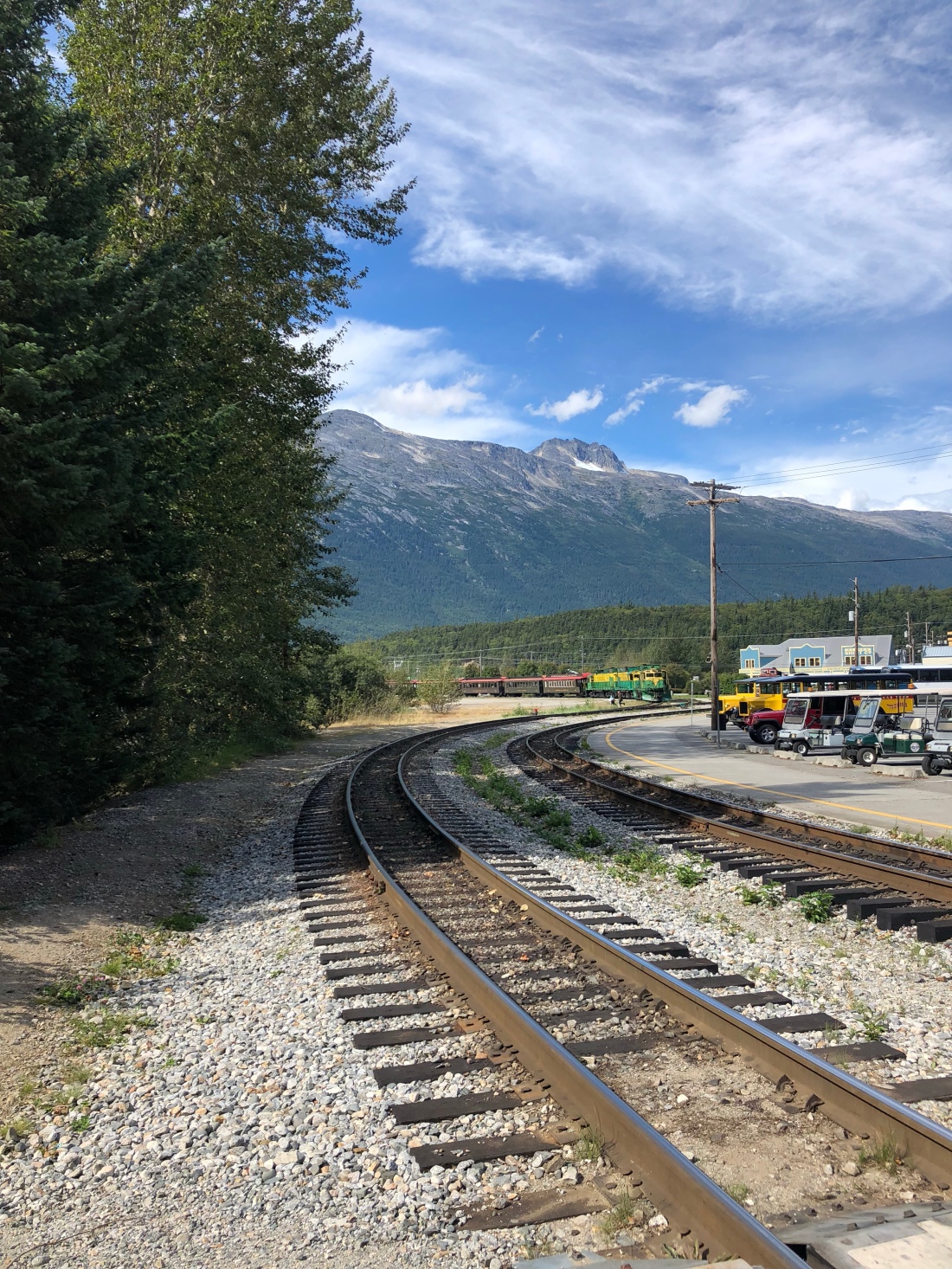 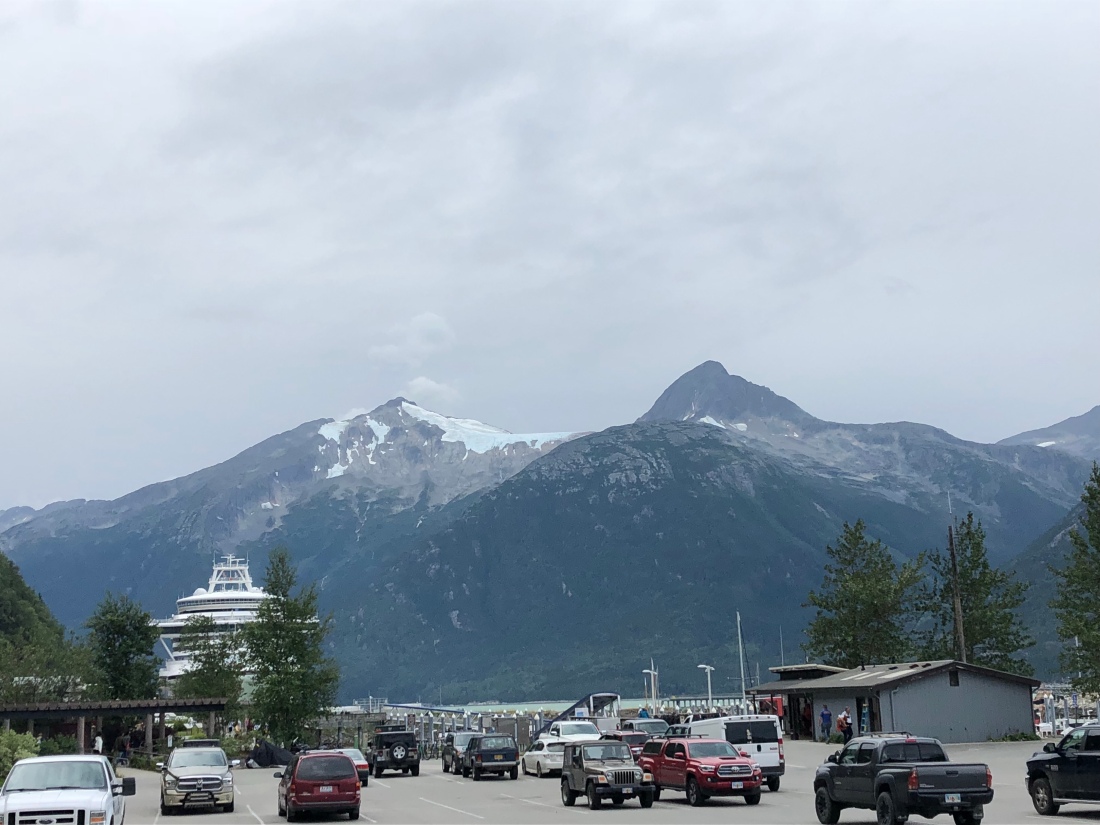 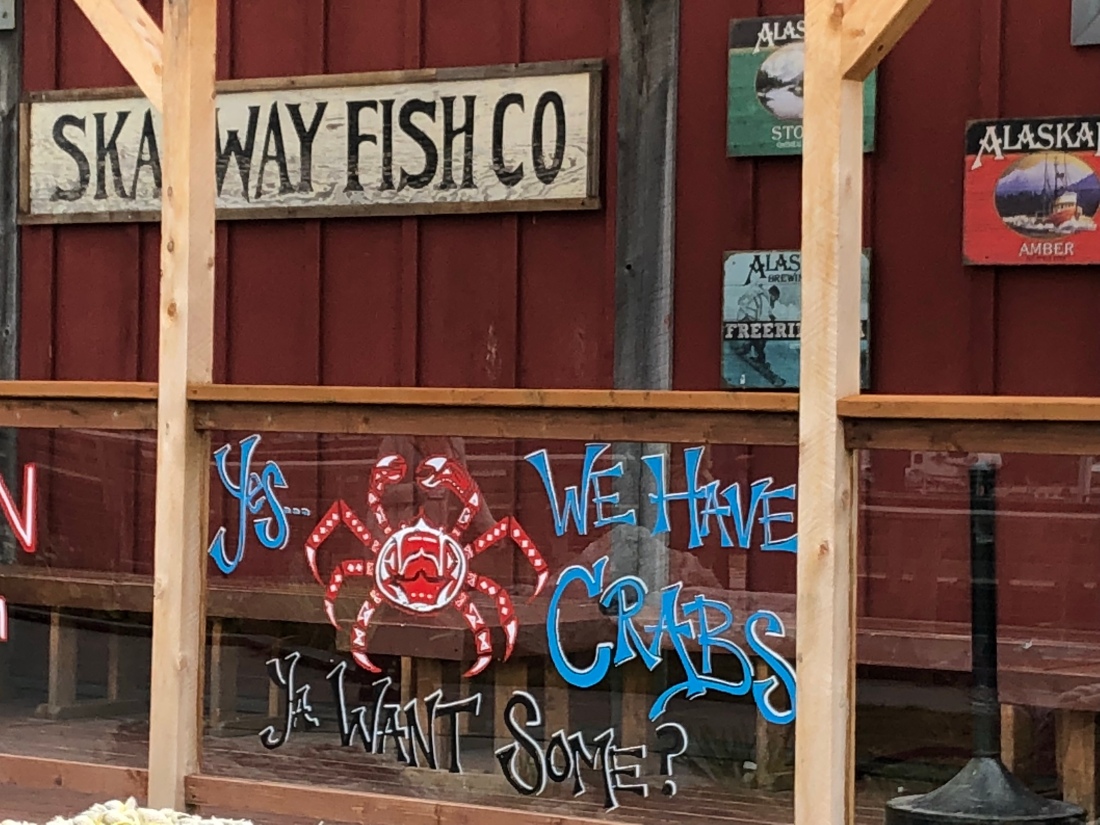 We had lunch back on board before taking Cornelia to kids’ club, and we then had a couple of hours to ourselves, which we spent hiking a trail in Skagway, up through the woods and around “Lower Lake”. It was strangely warm (I had expected Alaska to be much much colder) and even when it started to rain, it was not cold. I had hoped to run some of the trail, but it was largely rocky and some of the path wasn’t clear, so I’m glad I decided not to! Just a good old stomp suited me perfectly today! 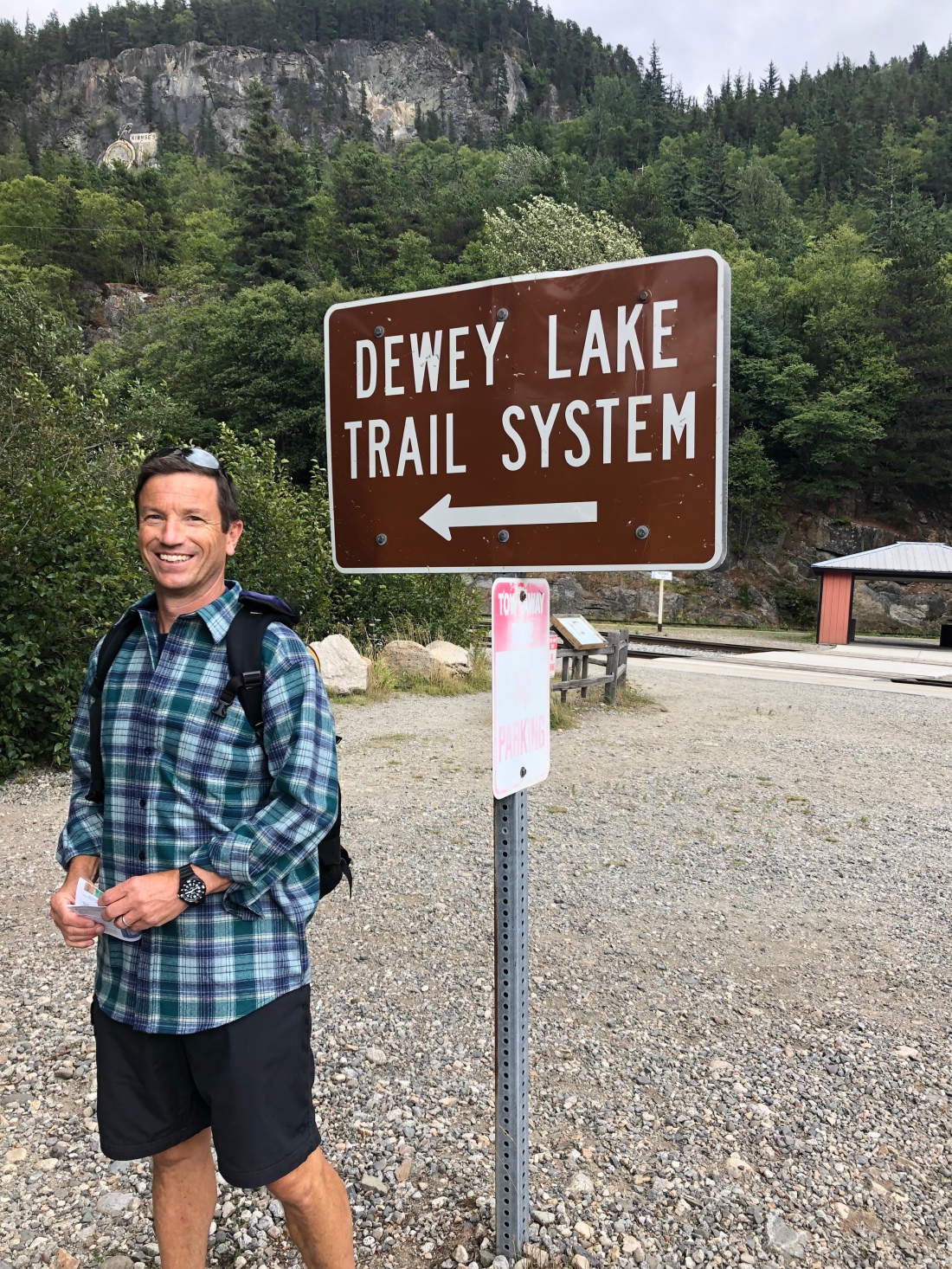 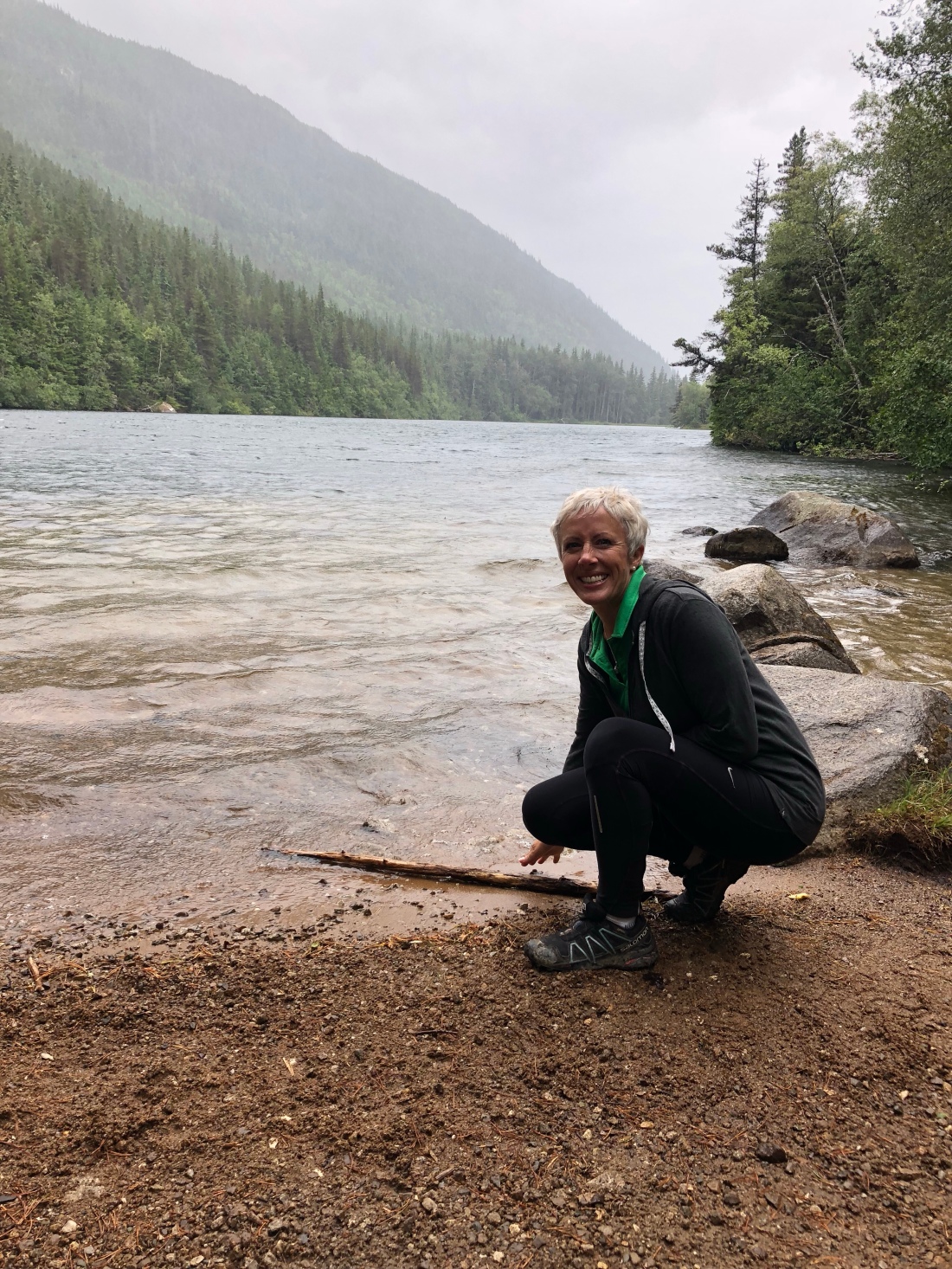 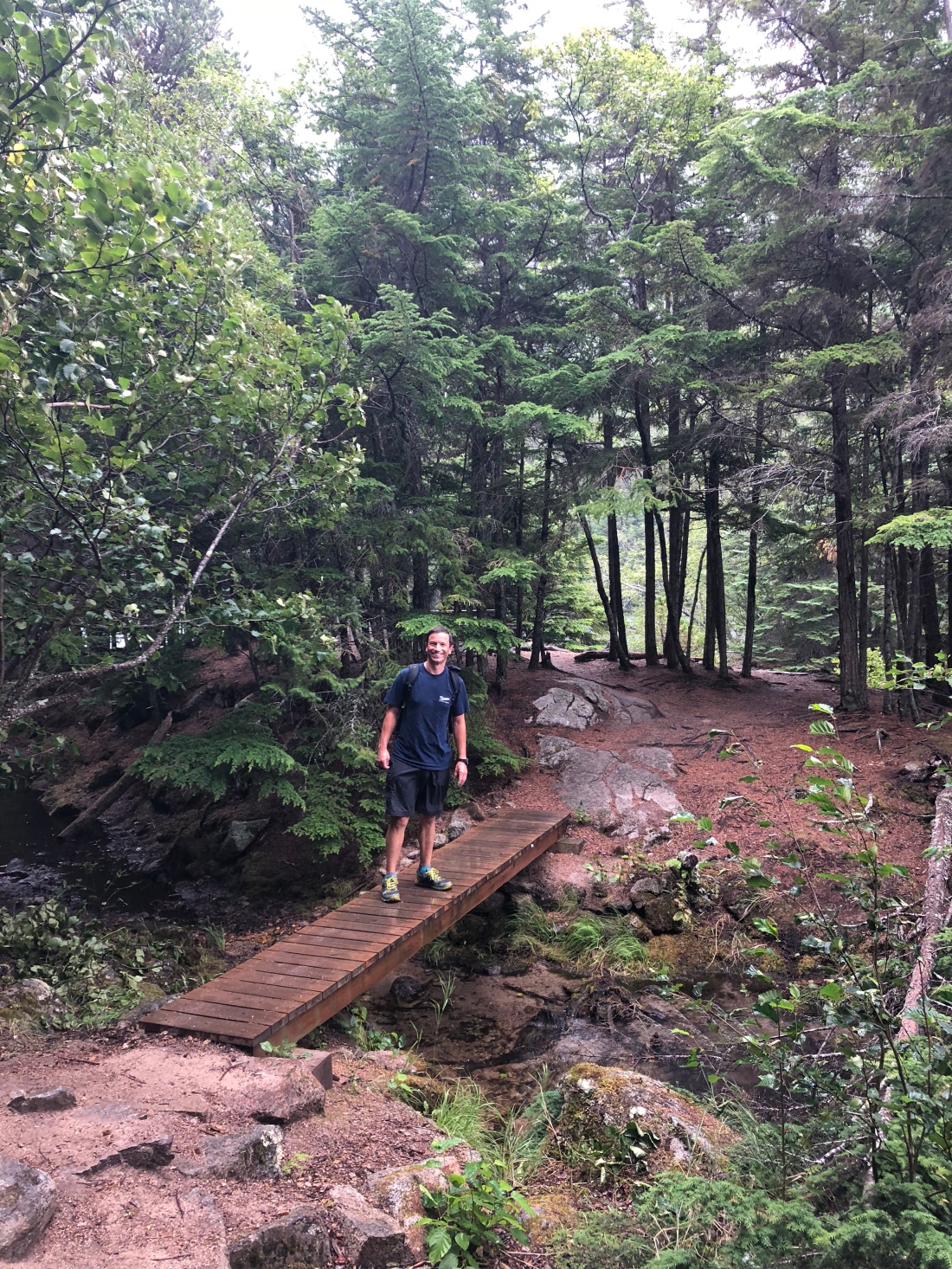 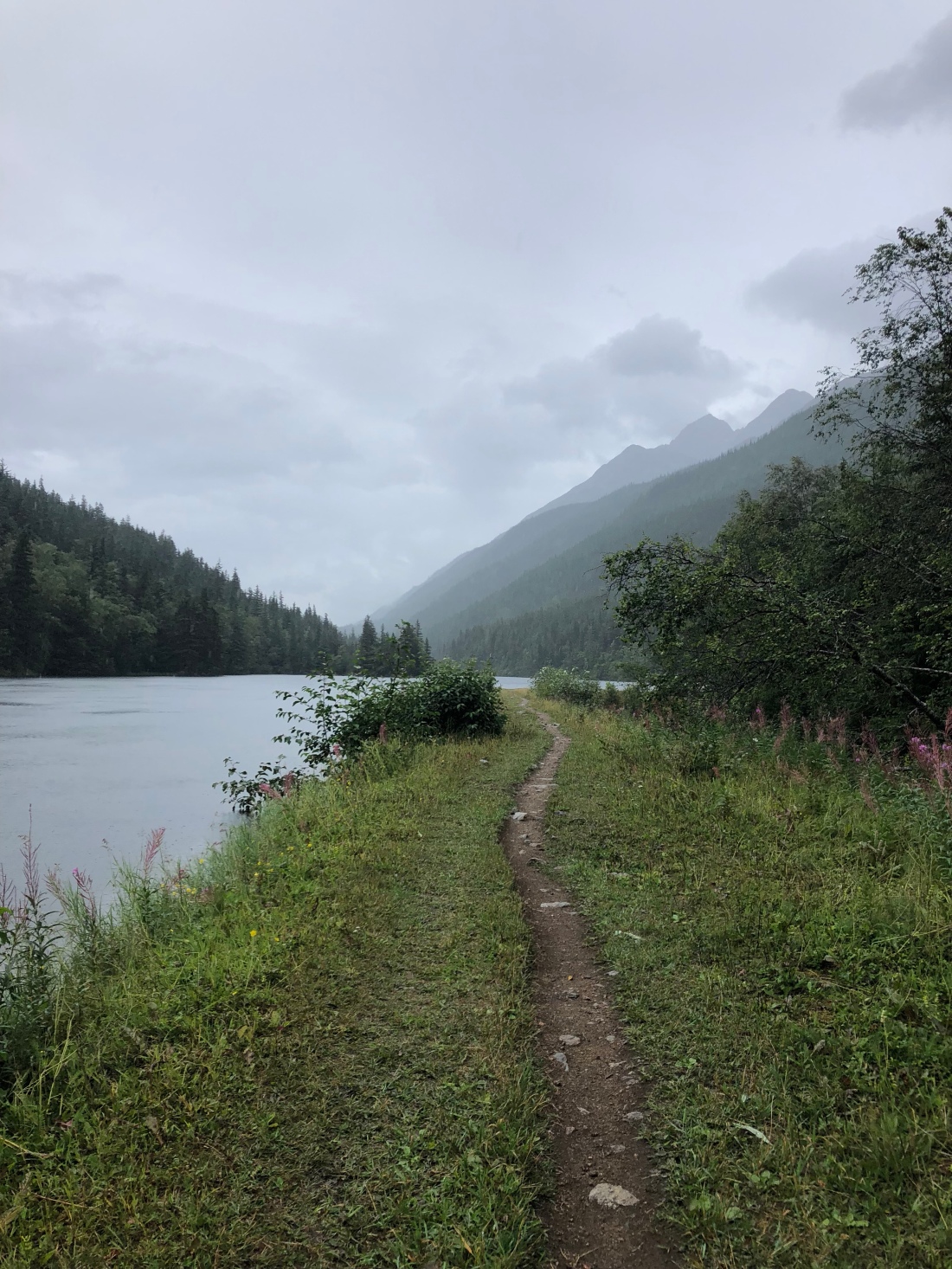 When we got back to the ship, it was pouring with rain and blowing a strong wind so I finally put on my rain coat! We had a good small-talk chat to the family in front of us while we waited to embark – the queue was surprisingly long (although Ian worked out that it must’ve been because one of the train excursions must’ve just returned, as we were pretty much the last people in the line, and it never got any longer after us!!) and it took nearly had an hour to get back inside, by which time, we had to run up to kids’ club to make the 17:00 closing time.

Cornelia was there with one other little girl, watching Moana, but was delighted to see us and ran straight over. Yep, 13 hours of sleep is definitely the answer!!

She had been asking for some popcorn earlier in the day (rather randomly!) and Ian had said she could have some on the boat later (as opposed to in Skagway) and, as she never forgets a bloody thing, our first stop was the alleged popcorn station that Ian was certain was on board, next to the pizza and ice cream station. Oh dear…. it must’ve been a figment of his imagination as no such thing existed! Luckily, the opportunity to have a chocolate ice cream as a substitute instead was good enough, and so, crazily at 17:00, just before supper, our little girl was sitting on the sofa in our cabin merrily working her way through an ice cream. 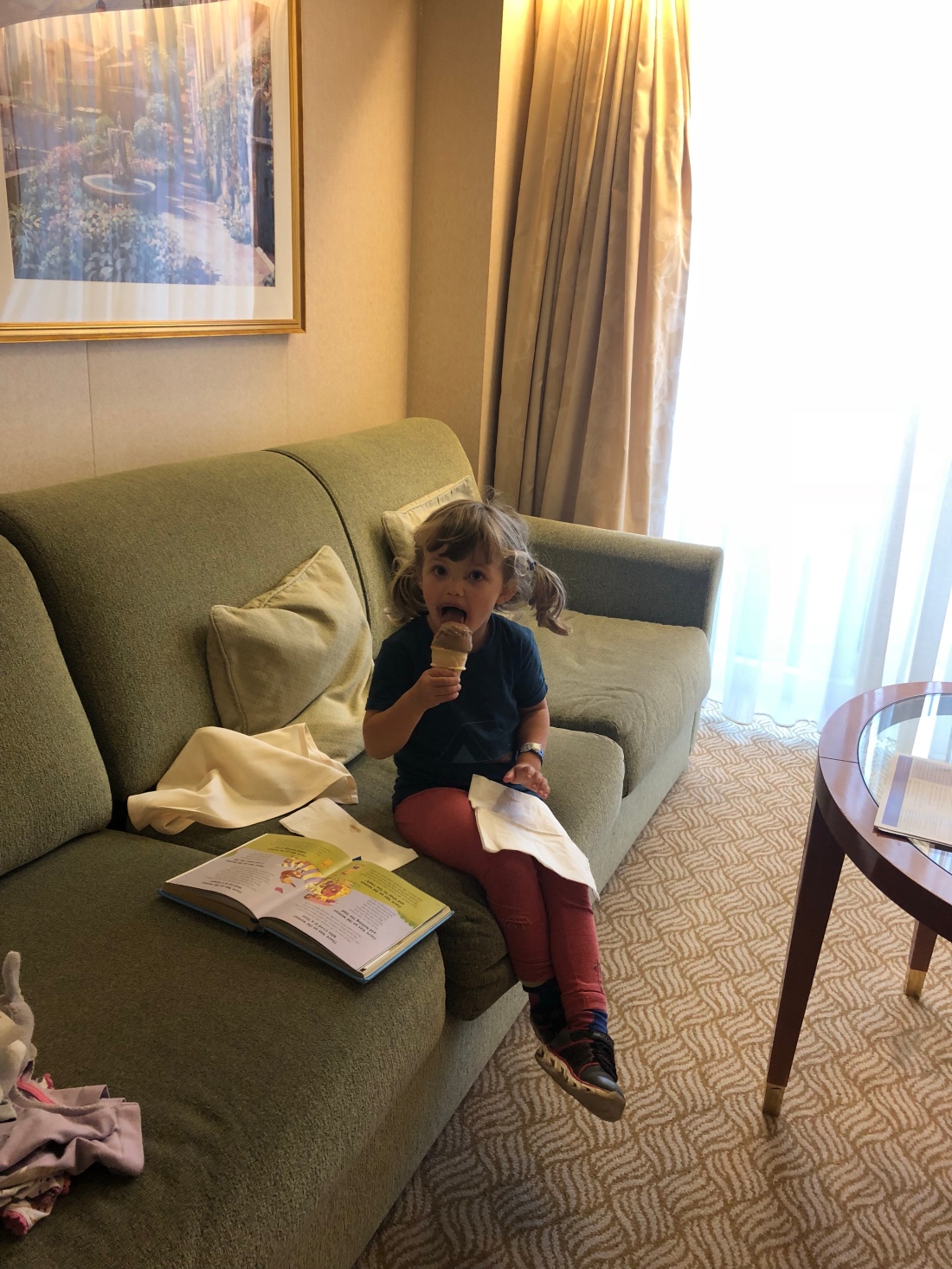 We all needed showers (or a bath, in Cornelia’s case), and once that was out of the way, we dressed for dinner. We fancied trying somewhere different for our evening meal today, and ventured down to Deck 5 to Michelangelo’s to see if they had any space. We were in luck, as long as we didn’t mind sharing a table. We were seated immediately on a table for eight and were shortly joined by Ron and Joan from , Brian and Nina from Texas and Arizona, and shortly thereafter by Chris, who it turned out, is a professor of physics and travels around the world lecturing. He was from New York and is 42, and was very good company, being particularly sweet with Cornelia, who kept calling out “Chris, Chris, excuse me Chris!” to get his attention. I had one funny observation and that was how low down the chairs were! It was at chest height for me, making for quite an awkward eating position. Even Chris, who stands at 6’4 remarked how low it was!

Anyway, back to the meal: Cornelia had fish fingers and chips, and devoured two bread rolls with butter. I had Langoustine Ceviche to start with followed by Alaskan Salmon, and Creme Brûlée, and Ian had Goats Cheese Soufflé, Trout and Cheesecake. I also treated myself to a Cosmopolitan and a glass of wine, both of which went down very nicely!

Although it was a nice meal, the restaurants as quite loud (as you would expect) and I thought it was a bit overwhelming for Cornelia. But when I asked her where she preferred to eat – here or at Horizon (our usual buffet restaurant), she immediately replied that she preferred here, as she liked the waitress (Jelena from Serbia) who had played endlessly with her, turning other waiters and waitresses into frogs, princes and princesses with SuperHero Cornelia’s magic wand…

After supper, we headed back to our room via The Piazza (where Cornelia likes to dance to whatever music is being played at the time). There we met Emily who turned four in July, and her parents Barbara and Steven. We let the girls make friends and run around together for twenty minutes before insisting Cornelia had to go to bed, and hopeful that Emily would go to kids’ club the next day. Her parents said that she is terribly shy and had been refusing to go. Cornelia asked her to come too, so maybe that will be enough to persuade her! 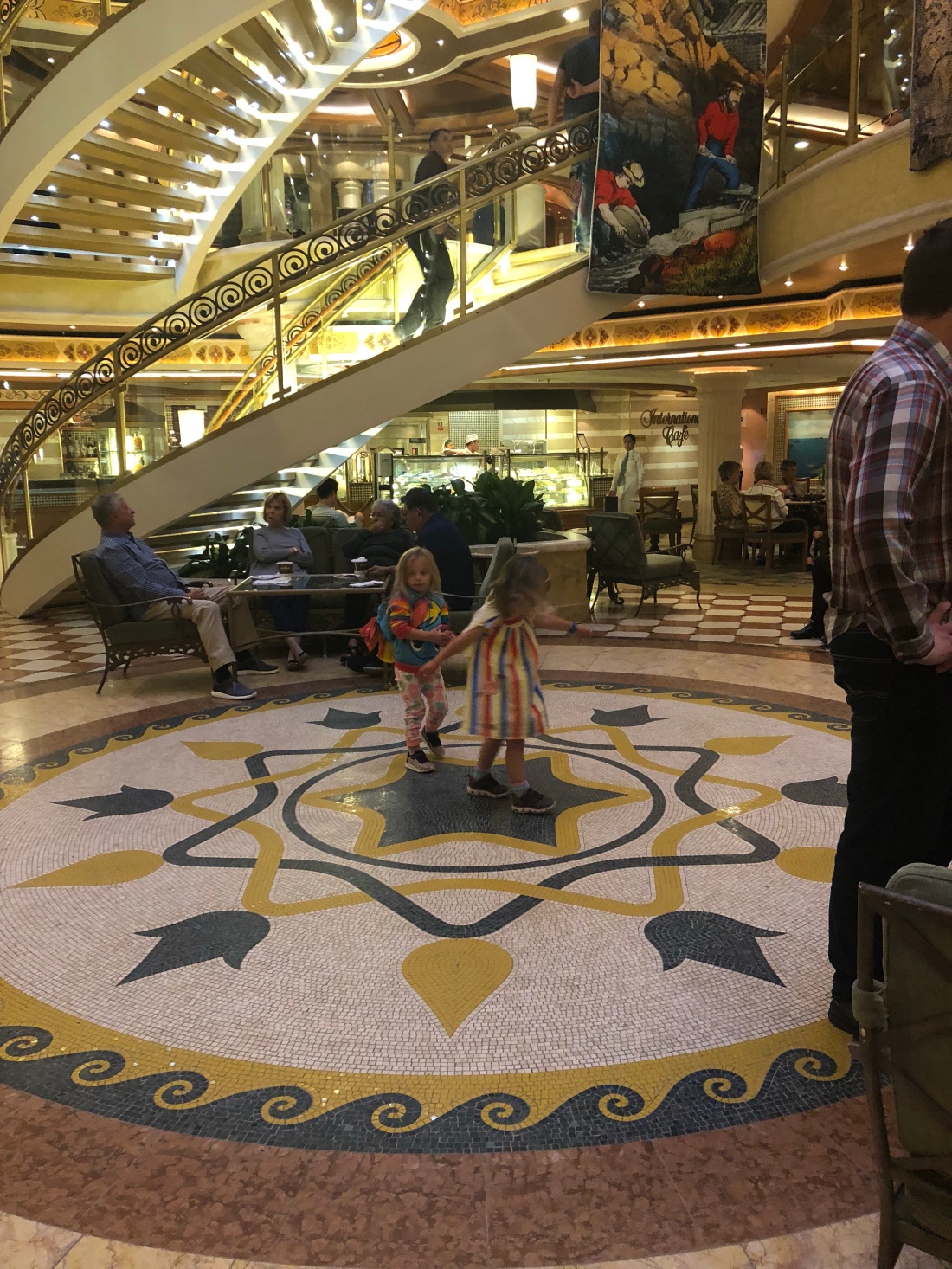 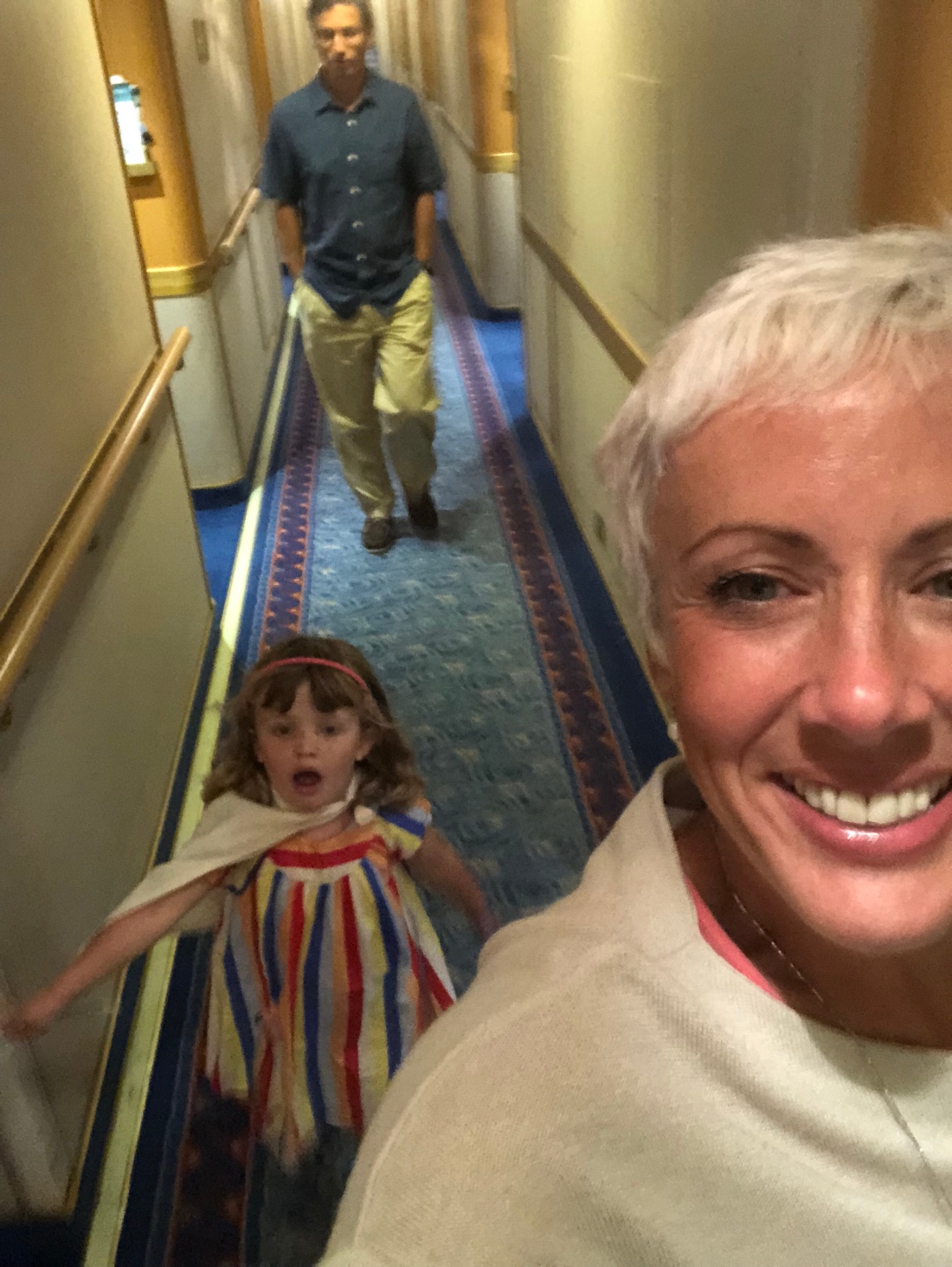 Finally we danced our way back to the cabin and managed to get Cornelia into bed. But despite the excitement and exhaustion of the day, she was still awake at 22:00 reading to her Gang.

Tomorrow, we enter Glacier Bay, so Ian and I had an early night, so we would be up in time to see it all!

One thought on “Skagway”