Cornelia was very late waking this morning (nearly 10:00) and Ian had already been out on the ship to watch the glaciers as we entered the aptly-named Glacier Bay.

We were both outside on our balcony when she woke up and she knocked on the window and stood there waving to us with a big grin on her sleepy face. What a fabulous start to our day!

These photos do not do justice to the purity and tone of the scenery here. It is quite special. 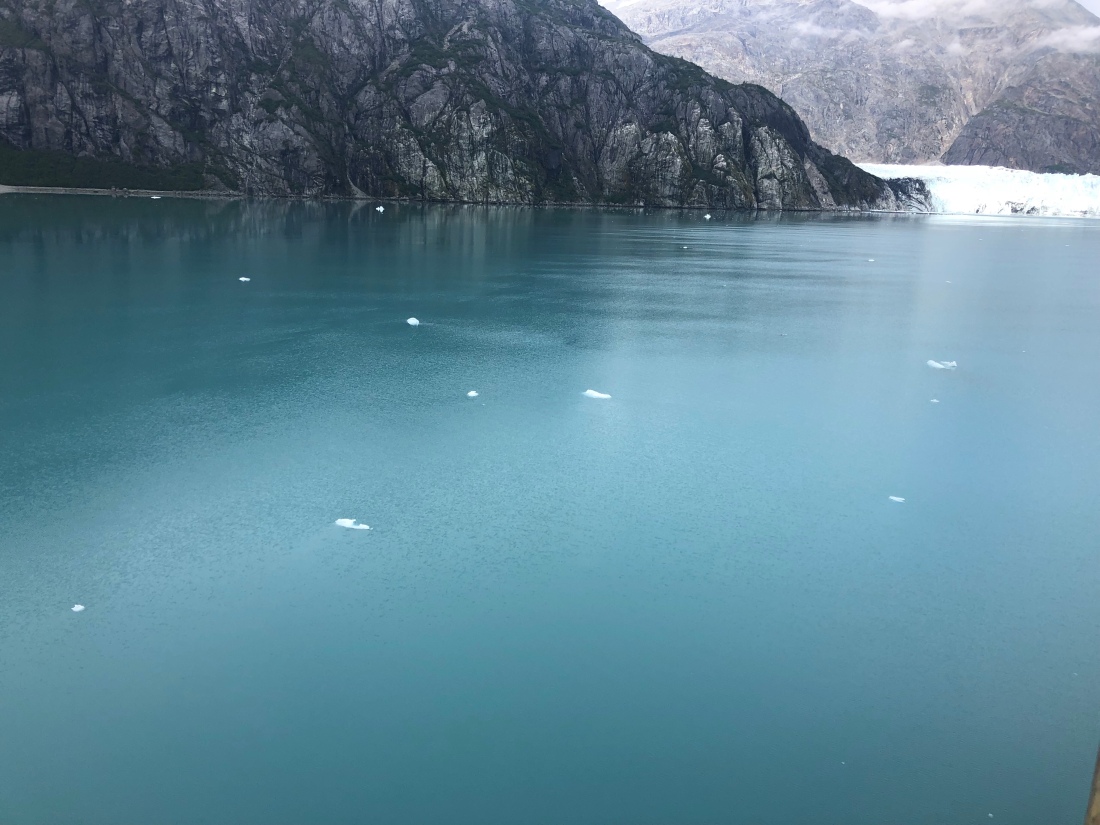 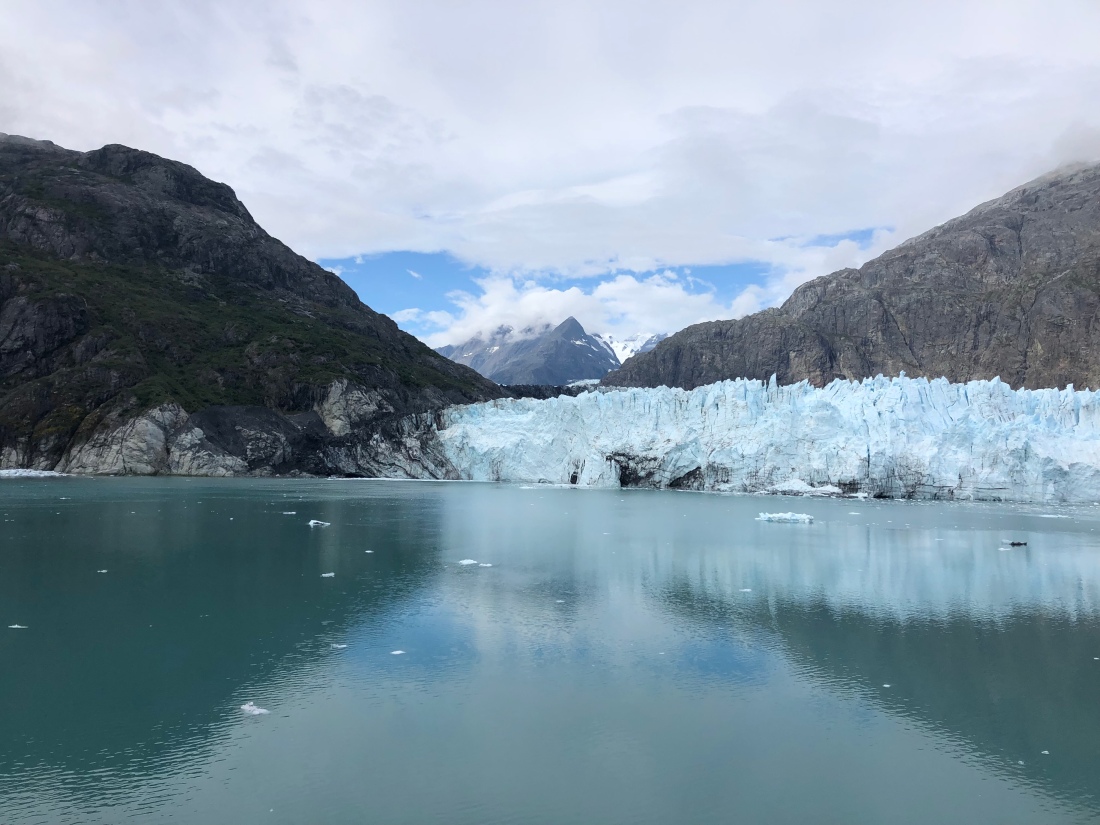 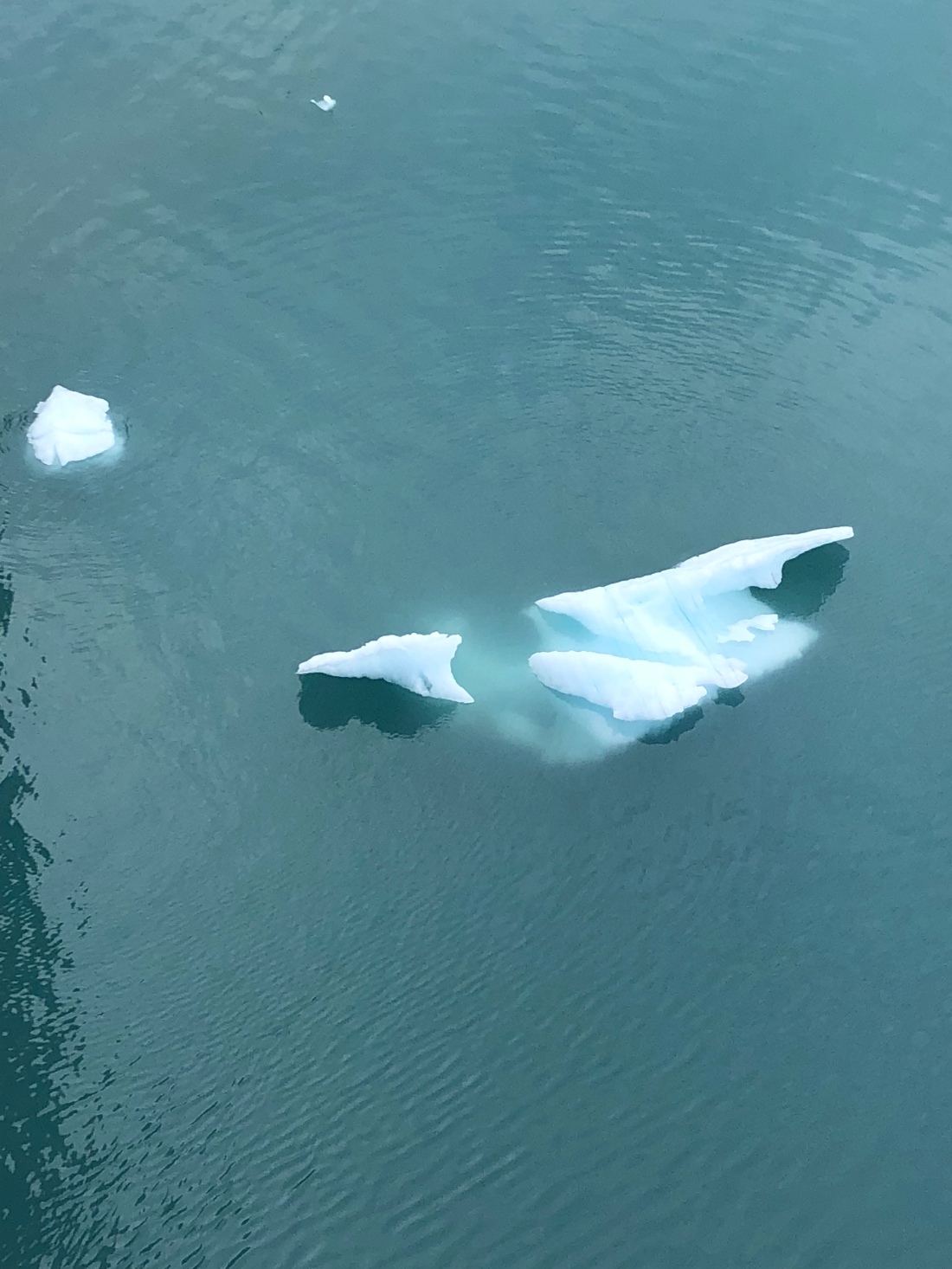 It was a very late breakfast, of course. I took Bugsy up by myself, leaving Ian to watch for glaciers and the associated wildlife, as he had eaten earlier that morning. Jelena, our waitress from last night was there, much to her and Cornelia’s mutual delight! It was a social breakfast as we also met Adeline who Bugsy plays with at club, and her mum. 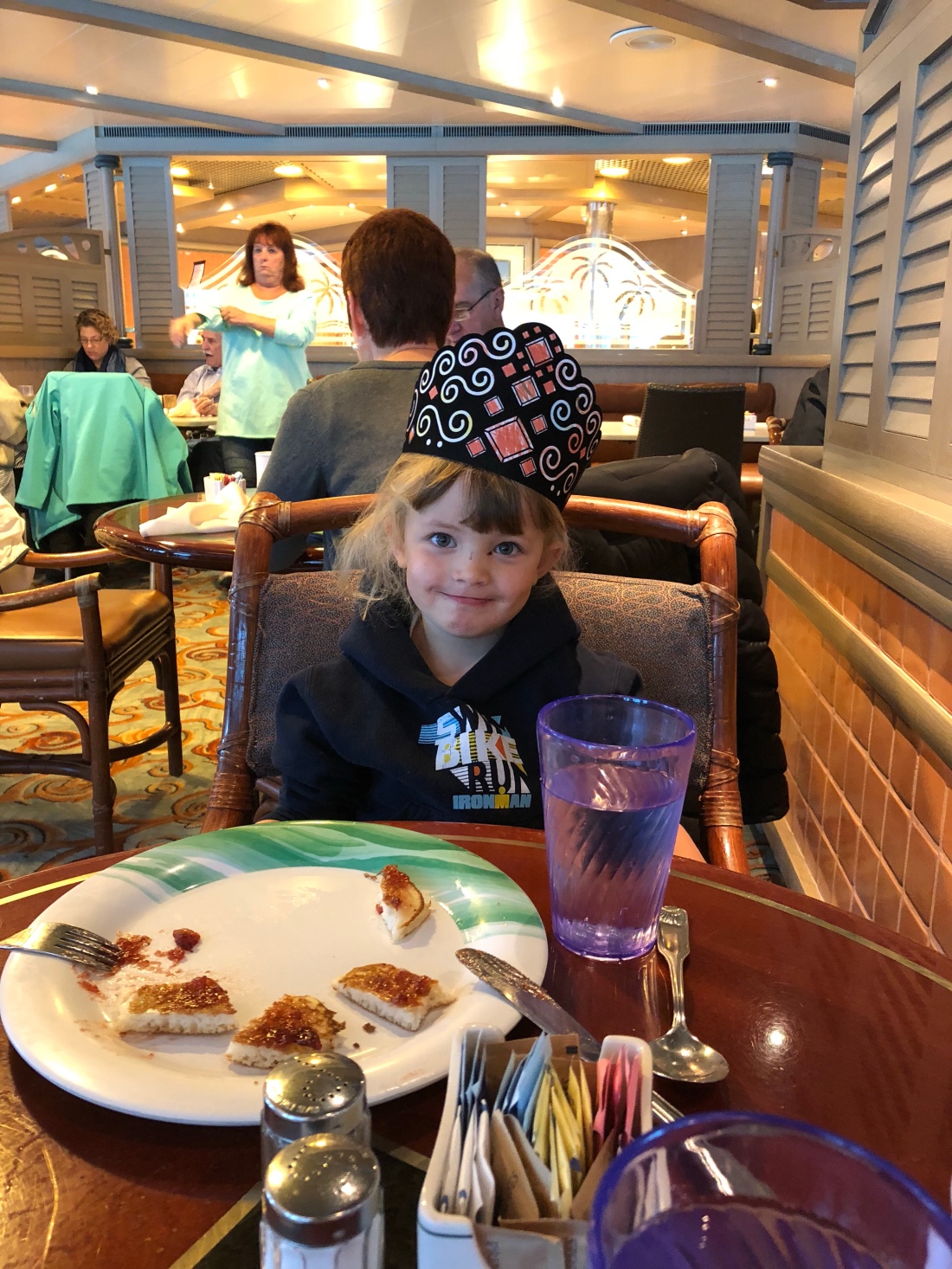 Having eaten a good meal and brushed her teeth, I took her on up to kids’ club only to find out it closed in 15 minutes for an hour lunch break. D’oh!! I left her there anyway to enjoy a couple of stories, while Ian and I waited outside on the deck, observing the Johns Hopkins Glacier in the background. It is impossible to put the size into context as it is so vast.

I collected Cornelia and we went straight back out on deck. We saw the same family we’d met yesterday waiting to get back on board, and Cornelia introduced herself beautifully. Still hyperactive from fifteen minutes at the club, she ran around and around my legs, when she bashed her head on a metal bit and hurt herself enough to burst into tears. Cuddling and rubbing the bump didn’t help and she asked to go back to the cabin so she could chomp on a gang member to make herself feel better. She was happy by the time she got back to the cabin and was instantly distracted by her Lego, which is something she’s really enjoying at the moment. “I’m going to make something from my imagination!” 😍 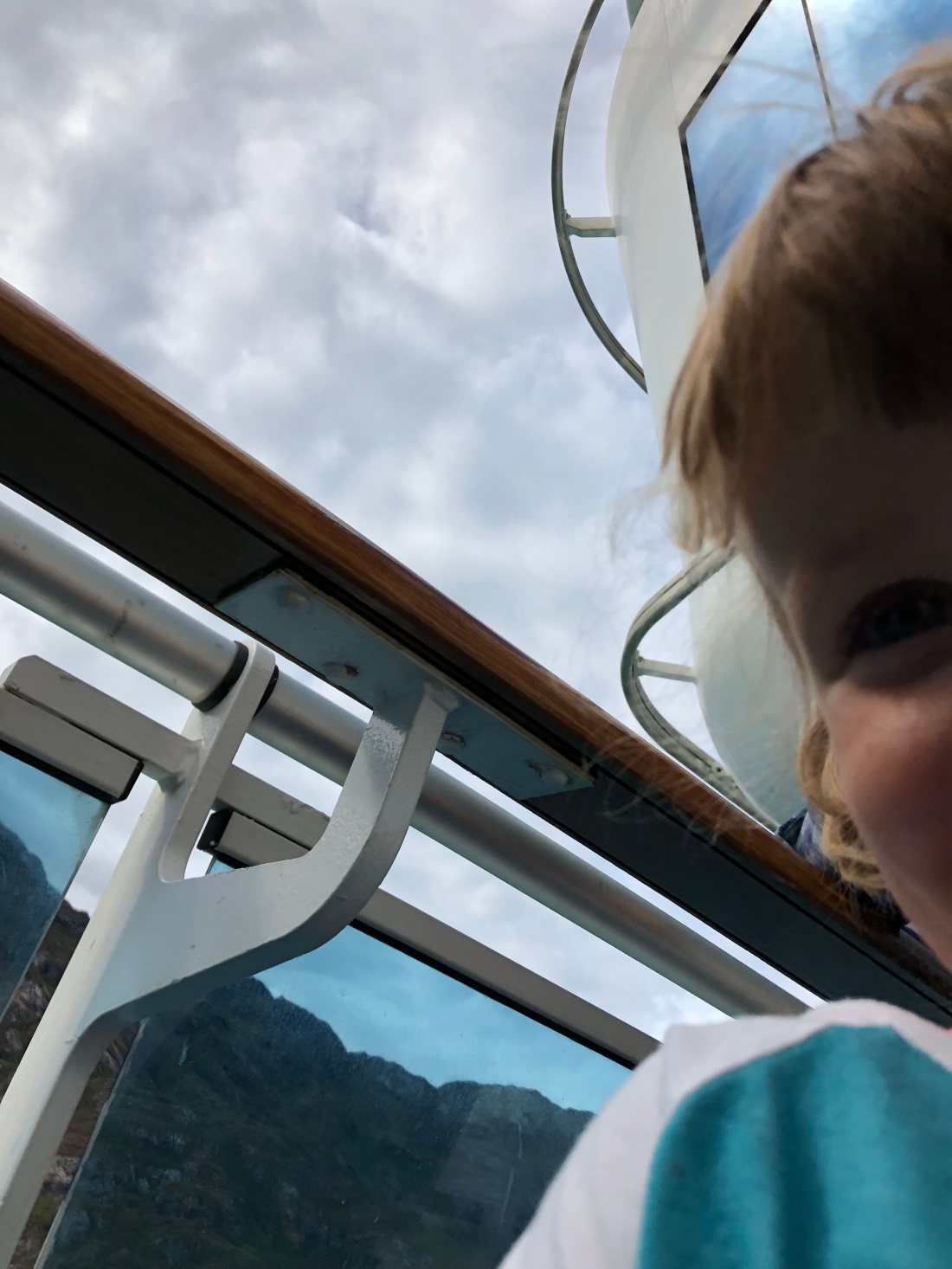 We returned to the kids’ club where the parents were invited to stay and listen to the Glacier Bay National Park ranger’s talk. Both Emily and Adeline were there too, and Emily even managed to sit next to Cornelia, away from her parents during the talk. Cornelia was hilarious during the talk, and was like Donkey from Shrek, desperate to be picked to answer the “who’s your favourite superhero?” question.

She then got stuck taking her top off, so I had to dash over to help her before she got upset! 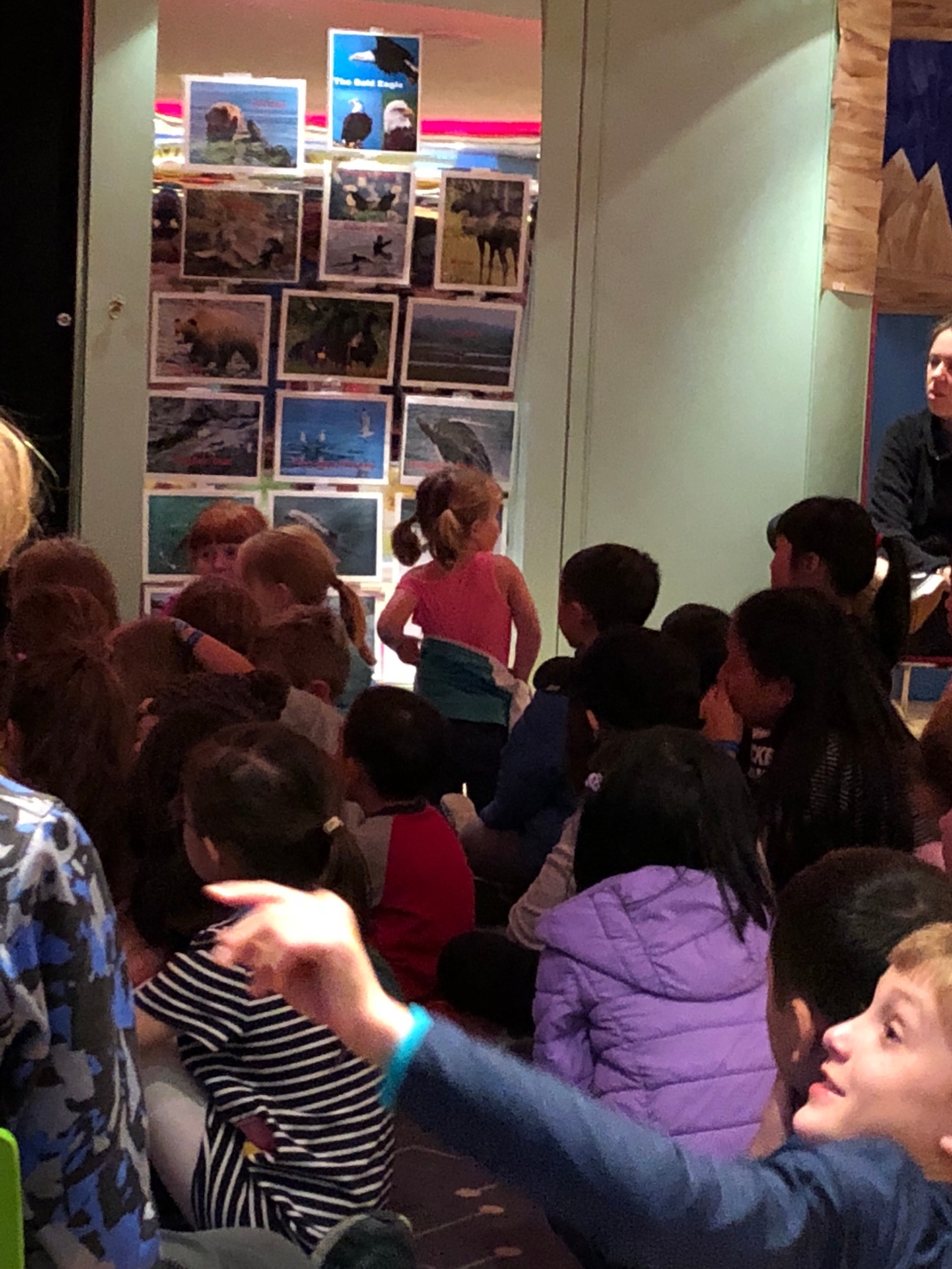 Emily’s visit was a success and she agreed to stay at the club after the ranger’s talk. Her and Cornelia started doing some colouring together and her parents managed to leave without her crying, which I think was a first for them. Adeline was also there, and wanted to sit with Emily and Bugsy too, so it looked as if it was all going to work out perfectly!

Ian and and I chatted to Barbara and Steven for a bit, who told us about their dog sledding trip yesterday and the story of a guest who once tried to steal a puppy!! Could you imagine getting caught doing that???!! Then we headed to the International Cafe for a (non-alcoholic) drink, following which we changed quickly and went to the gym together. Ian’s legs are feeling tender after his long walk up Mt Roberts the other day, but we ran next to each other on the treadmills, looking out to sea. At some point, there were whales to be seen, and we guessed this from the flock of people he dashed in front of our view point with their binoculars and cameras. I chatted to the wife of the party that we had met in the queue yesterday and again outside on deck this morning, as she took the treadmill next to me, and I ended up staying on the treadmill for an hour. At last it felt as if I had actually done some good today! Ian went back to the cabin to shower while I finished my run and after I had stretched out, I returned for mine. Ian went to collect Cornelia from kids’ club where she had won a bald eagle teddy in a board game! Apparently, you had to put all your counters on the board to win, and she couldn’t explain any more than that, other than her team won.

We decided to give her an early supper, and try her in the club this evening, on the basis that a) she hadn’t had any lunch because of her very late breakfast this morning, and b) she’s been staying awake until nearly 22:00 most evenings anyway. As the club reopened at 19:00, I took her off for dinner in the Horizon buffet straightaway while Ian did a laundry run.

Unfortunately, poor old Bugsy ran headfirst into the frame of a chair and hit herself right over her eyebrow. Much crying followed, and the incident put her in a slightly grumpy mood. When she had recovered a bit, I carried her back into the restaurant, to a table overlooking the water. I set her down and went to get her order of a bowl of macaroni cheese. Typically, this was the first evening they didn’t serve it, so I chose pasta pesto for her instead – our usual trusty fallback meal. Whilst at the food bar, an old guy asked me what it was, and I explained it to him. He told me that he tried to eat healthily, and that all his wife ate was hamburgers and fries, claiming that now she was 76, she could eat as she darn well pleased! She was now in the casino, but he didn’t gamble so took his opportunity to get some food! I can basically see this being me and Ian in 30 years… 😂

I returned to the table to give Bugsy her food only to be told “I’m not eating THAT! Yeuch!” just as the old guy came over and asked if he could join us. I welcomed him to our table (although the same cannot be said of Cornelia) and had a great time listening to his tales. He is 71, one of thirteen children (although his mother had actually lost thirteen other babies, so had given birth an extraordinary 26 times) and he had five grown up kids of his own. He was 6”4 and one of his sons is a whopping 6”9 and used to play American Football for Washington RedSkins and Minnesota Vikings, both of which are (so Ian informs me) top NFL teams. He was a Vietnam Veteran, although he was in the Air Force, rather than on the ground, and was hilariously good company. Cornelia took some time to warm up, but did eventually eat all of her pasta and engage in some conversation with him. We were just about to leave when Ian appeared, so he sat down and had a chat with Joe, until I apologised but said we needed to get her to the kids’ club for her pyjama party.

Cornelia made it to club in her Paddington pyjamas around 19:15. Jerry, one of the supervisors, said:

“Oh, I love Paddington! He comes from where I come from!”

She dashed straight off to see which friends were around and I briefly explained that she would normally be going to be around now, so if she suddenly had a massive mood swing (good or bad) it was a sign that she needed to leave and go to bed. They promised to page us if this happened!

Which left Ian and me to our own devices for once. We decided to eat at Horizon as we weren’t sure how Cornelia would get on at the evening club, and it was easy to leave the buffet, than an a la carte restaurant. And typically, for the first time this trip, I wasn’t inspired by any of the food. I ended up with a funny mix of bean stew, undercooked potato wedges, rice, half a stewed Italian sausage, carrots and some polenta with cheese. A totally random selection and nothing was terribly enjoyable, and in particular, I’ve never eaten less carroty flavoured carrots. For dessert, I’d had my eye on a tiramisu, but by the time I returned to the buffet, they had all gone. Again, I settled for an odd mix of cheese, fig jam, macadamias, and melon. Then, when Ian went up, he came back with a tiramisu for me, as they’d restocked! Just as well I had been for my run today! 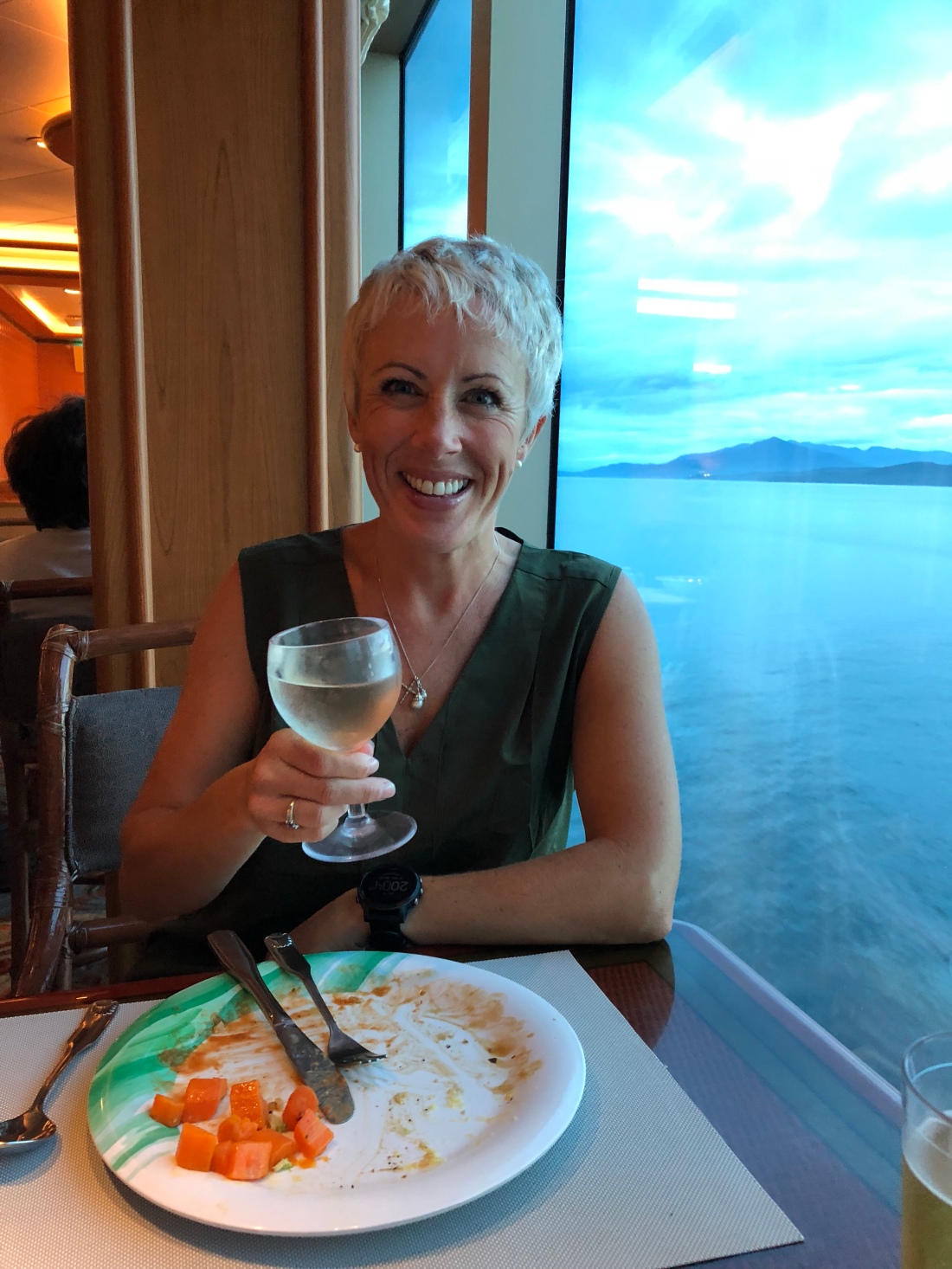 Despite the food, dinner was lovely this evening. We saw a number of whales in the sea, albeit in the middle distance, and we chatted to various people who had stopped by to ask where our daughter was. In particular, we chatted to one of the waitresses from India, Kenny, who told us all about her home in northern India in the mountains, and how wonderful it is to see whales here.

The love for Cornelia didn’t stop at dinner time… as Ian and I explored the decks in more depth, a guy who was walking past stopped to tell us that he and his fiancée had seen us in Juneau (our first port) and had thought how utterly gorgeous and cute Cornelia was, and now his fiancée had decided she definitely wanted kids! Is there any greater compliment you could pay a parent??!!! 😍 (Obviously none of these people have seen the tired tantrummy child..!)

We visited the casino briefly and threw away the $7 I had in cash on me on some slot machine that neither of us understood. Then as we passed the roulette tables (my favourite), Steven (Emily’s dad) was at the table, doing rather well. He’d started with $400, and as well as holding onto this stake, was currently over $1000 up. I was sorely tempted, but it was nearly 21:00 and I didn’t want to leave Cornelia too late in the club. (It stays open until 22:00, but there is then a group babysitting service available until 01:00!!)

She had been an absolute treasure, by all accounts and the two staff members were full of love for her. She was returned to us with a stuffed penguin, and a bear she had painted. Including the eagle from earlier, that’s three new gang members today…! Quite a haul! She was bursting with excitement because Stanley the Bear has been to visit, and he was a man dressed up as a bear, and she hadn’t been scared at all, and she thinks this is because she’s four now. Chatter chatter chatter all the way back to our cabin! It was utterly delightful!

The excitement meant she was difficult to settle to sleep, and it took two bedtime stories from Daddy, a Princess Cornelia story from Mummy and a cuddle from Mummy, then Daddy, before she finally fell asleep shortly after 22:00.

2 thoughts on “Headbanging in Glacier Bay”