Bugsy had a brilliant sleep, but Ian and I were not so lucky. The storm force winds outside were banging our neighbour’s balcony furniture non-stop from 3 o’clock onwards. Ian did actually check our balcony to make sure it wasn’t us, but it was definitely next door. We then had a comedy moment at about 4am where Ian couldn’t shut the balcony door properly because the wind was so strong. I managed to slam it eventually which shut it completely. Amazingly, Cornelia (who was lying right next to the balcony door throughout this commotion) stayed asleep the whole time. I even managed to lift her just in case, as she had knocked back a huge glass of milk before bedtime.

I had set my alarm for 08:00 so that I could go to the spinning class at 08:30. Ian and I were both awake early anyway (there is a time difference of -1hr) and I was about to creep out when Cornelia woke up and saw me. I had a quick cuddle and left Ian snuggled up with her as I raced off to make the class on time.

There were only eight of us in the session, with a bulky PT taking the class. He was quite funny, with a questionable ability to count seconds accurately. Thankfully, it was in our favour – he would say “100% speed for thirty seconds” but the burst actually only lasted about 15 seconds. Nonetheless, I sweated hard in the airless gym, glugging down as much water as I could!

After class, I trotted off to find Ian and Cornelia at breakfast and eventually tracked them down, sitting with a couple, Brad and Adrienne from Seattle. I hope it was nothing to do with me, but as I sat down, so they left the table! It was a buffet breakfast, and once again, I managed to control my desire to scoff everything in sight, in favour of having some treats later on.

Once breakfast was over, Bugsy was desperate to get to kids’ club, so she brushed her teeth quickly and we both took her up to sign her in. With her gone, what were we to do???!!! 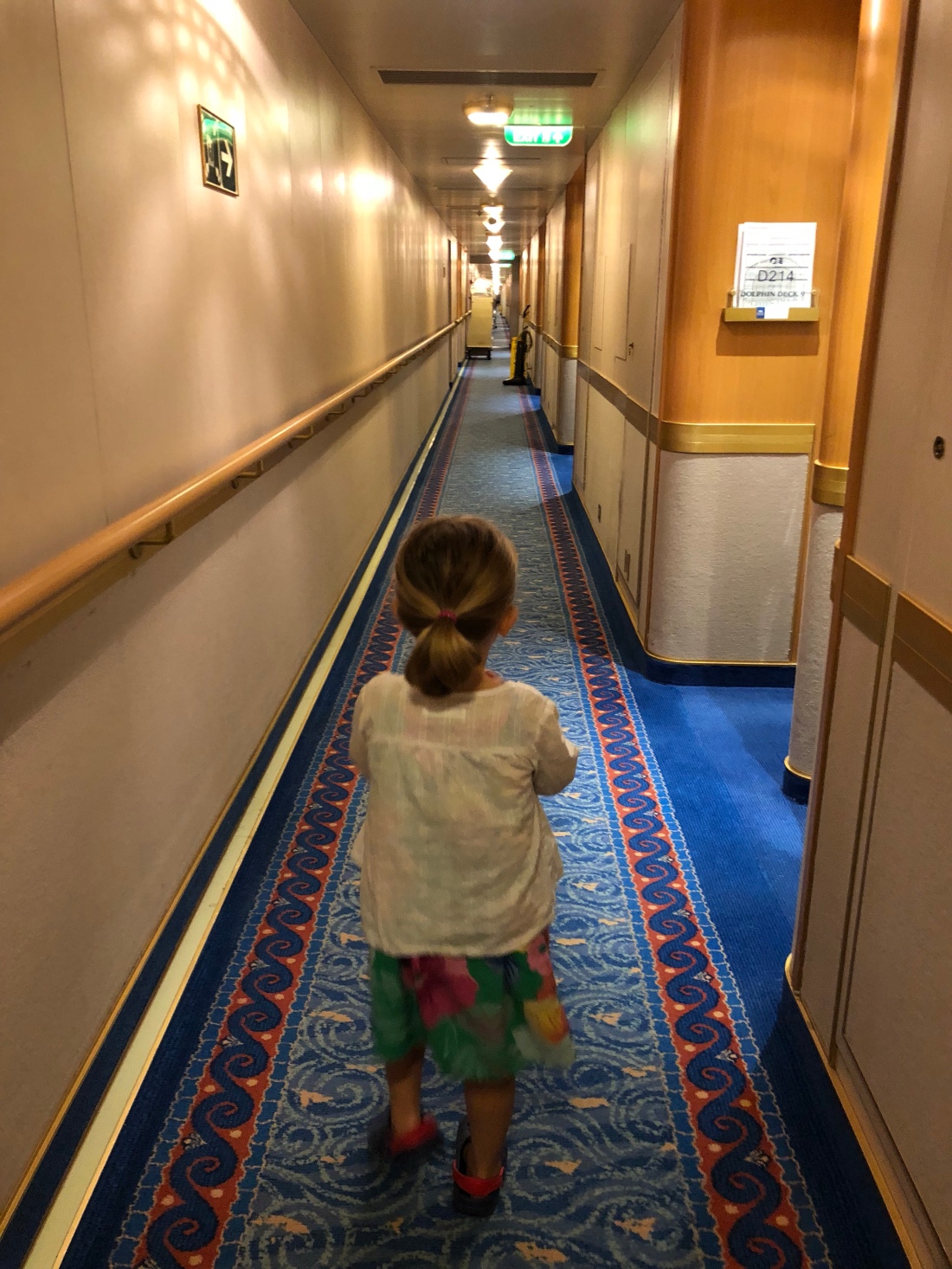 There is a jogging track up on the top of the ship, and we went to take a look at it. We thought it went all the way around the boat, but actually it is a very short track and you have to run around it 16 times to complete one mile! In the windy wind!!! 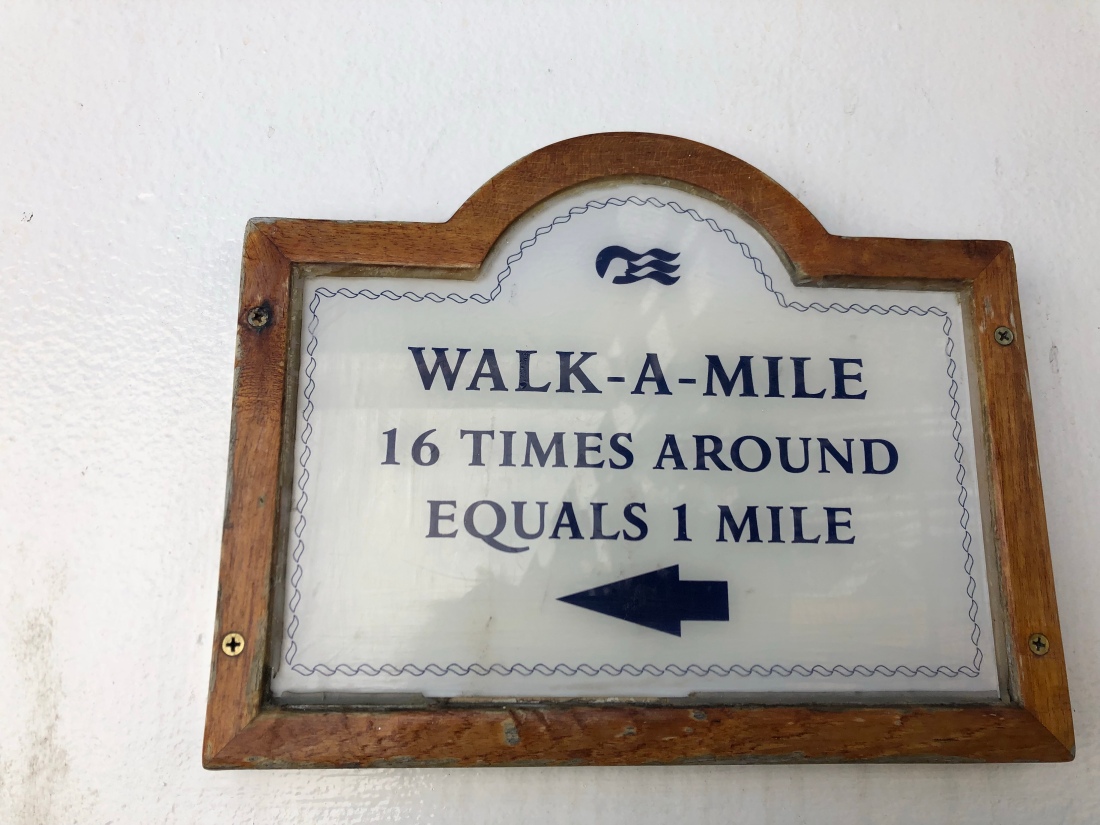 After a slight dispute over which way to get back downstairs, we went to the Princess Theatre to listen to Dallas Seavey talk about “The Art of Mushing”, which is dog-sled racing. He has won the coveted Iditarod four times (so far). This is a 1000 mile race over Alaska, and redefines “hardcore” in almost every single way I can think of. He has dedicated his life, pretty much since he was born, to these dogs and training hard and racing wisely, and was marvellously inspiring, as well as being VERY easy on the eye…! We could both have happily chatted to him for hours, but it was time to collect Toddles, so Ian nipped up to Deck 17 while I listened to the end of his presentation (honestly, if you have some time, look him up on the Internet. His story is worth it!). 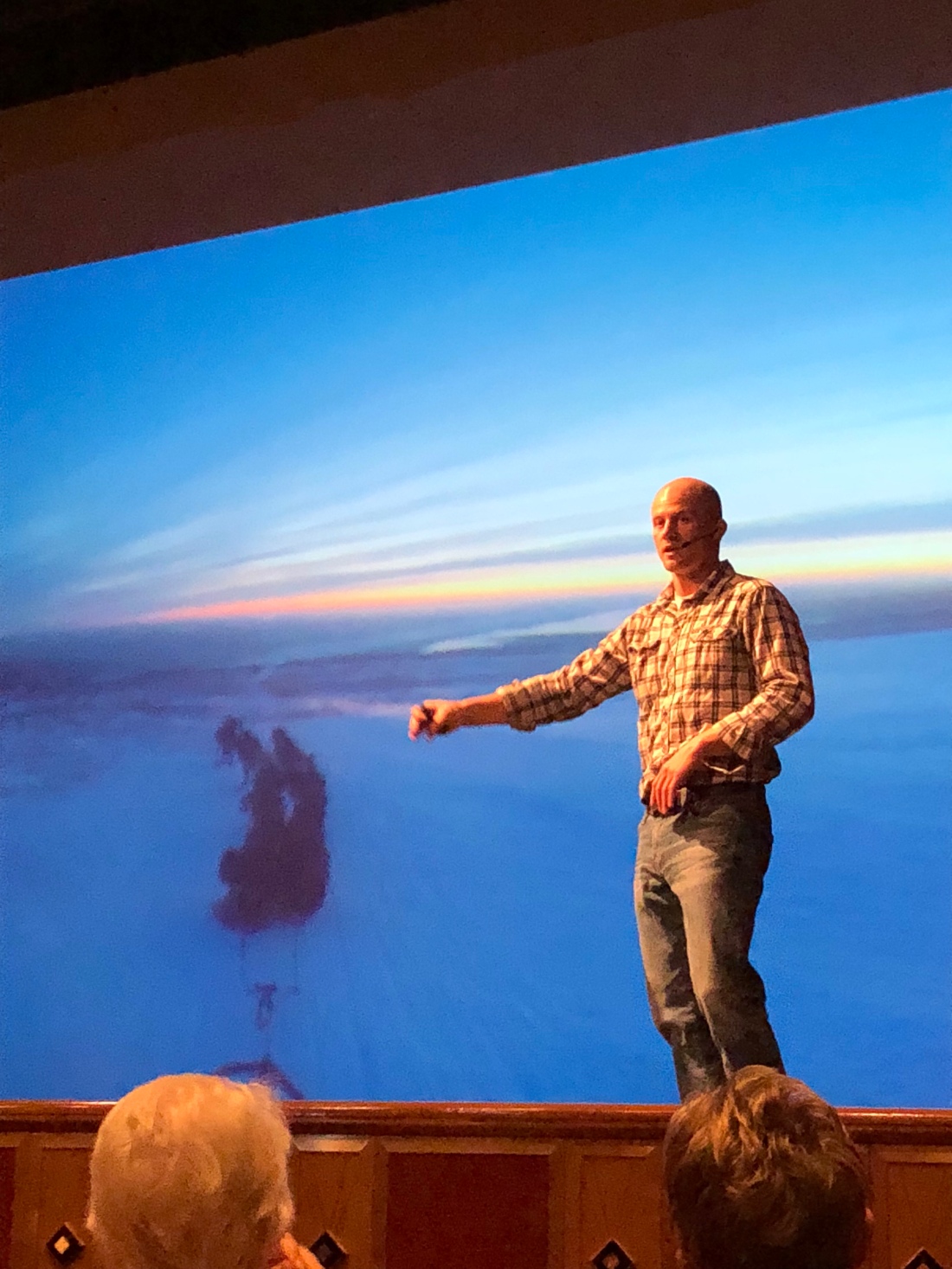 We ate a light lunch in the International Cafe. Cornelia had a cheese and ham toasted croissant, Ian had a tuna panini and I had a mixed salad and a large coffee! And Cornelia had been promised an ice cream and managed a huge bowl of (sugar free) chocolate ice cream, helped out a little bit by me!

With some time to kill before kids’ club reopened, we wandered around the ship trying to get our bearings. Ian went to look in the shop at books on Alaska, while Cornelia and I danced to the live music being played in the piazza forum. There was a violinist and guitarist performing some easy-listening tunes from the 60s and 70s (I think!) and Bugsy had a good old dance around, before they finished and the entertainment staff took over. I tried to convince Ian to take part in the games, but he was having none of it. Instead he went off to the Internet cafe, and Cornelia and I watched other people compete against each other picking up coffee beans with chopsticks and transporting ping pong balls from a bowl to an egg box with a spoon, as quickly as possible. Cornelia was enthralled by it! 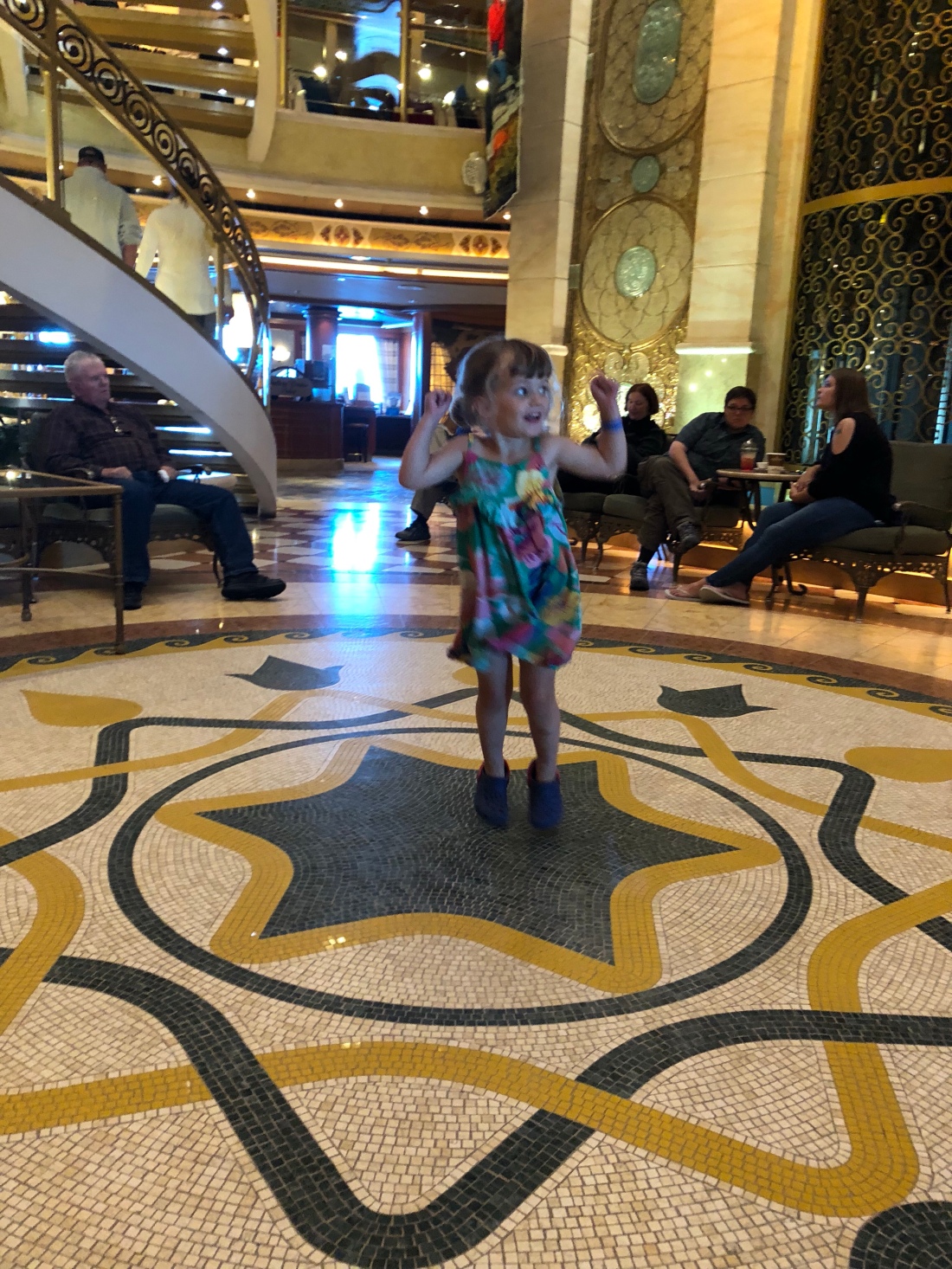 Finally, it was time for her to return to kids’ club, and Ian and I returned to our cabin to try and work out what we are going to do when this cruise ends. We have no plans so far! Eek! Eventually, we booked a week in Maui (a recommendation from Cat and Pete) but that doesn’t start until 1 September, so we still have a week to sort out on our return. Hmmmm. Whatever we decide, it will need to be cheap! We have blown our budget already. Oops…

I tried updating the blog, but the WiFi is terribly slow and eventually I gave up, for fear of wasting all my internet minutes on “unable to upload photo” notifications. We had spent almost all afternoon making plans for the next couple of weeks and the 16:45 pick-up-your-child time came by very quickly!

Ian went to get her as I continued to write up the blog offline and she can running into the cabin, full of beans, wanting to show me and tell me everything she’d been up to! She’d made a crown, a cat glove puppet and coloured in her own t-shirt and made some new friends (although I’m sure how friendly she became with them as she forgot to ask their names!). Despite her fantastically exciting afternoon, she had chosen to spend tomorrow afternoon on shore in Juneau with us, rather than with kids’ club. Whilst I am quite delighted by this, I am also slightly surprised and we immediately had to drop our plans for an epic hike around the mountains tomorrow!

Cornelia and Ian played with the Lego for a while, and then it was time to get changed for supper. It was formal wear tonight, but my bloody husband had forgotten to pack his smart clothes, which meant that I was all dressed up with nowhere but the buffet restaurant to go! I am enjoying it there, but I am craving a bit of socialising with some other adults and kids! I am going to see if I can buy him a suit in Juneau tomorrow… 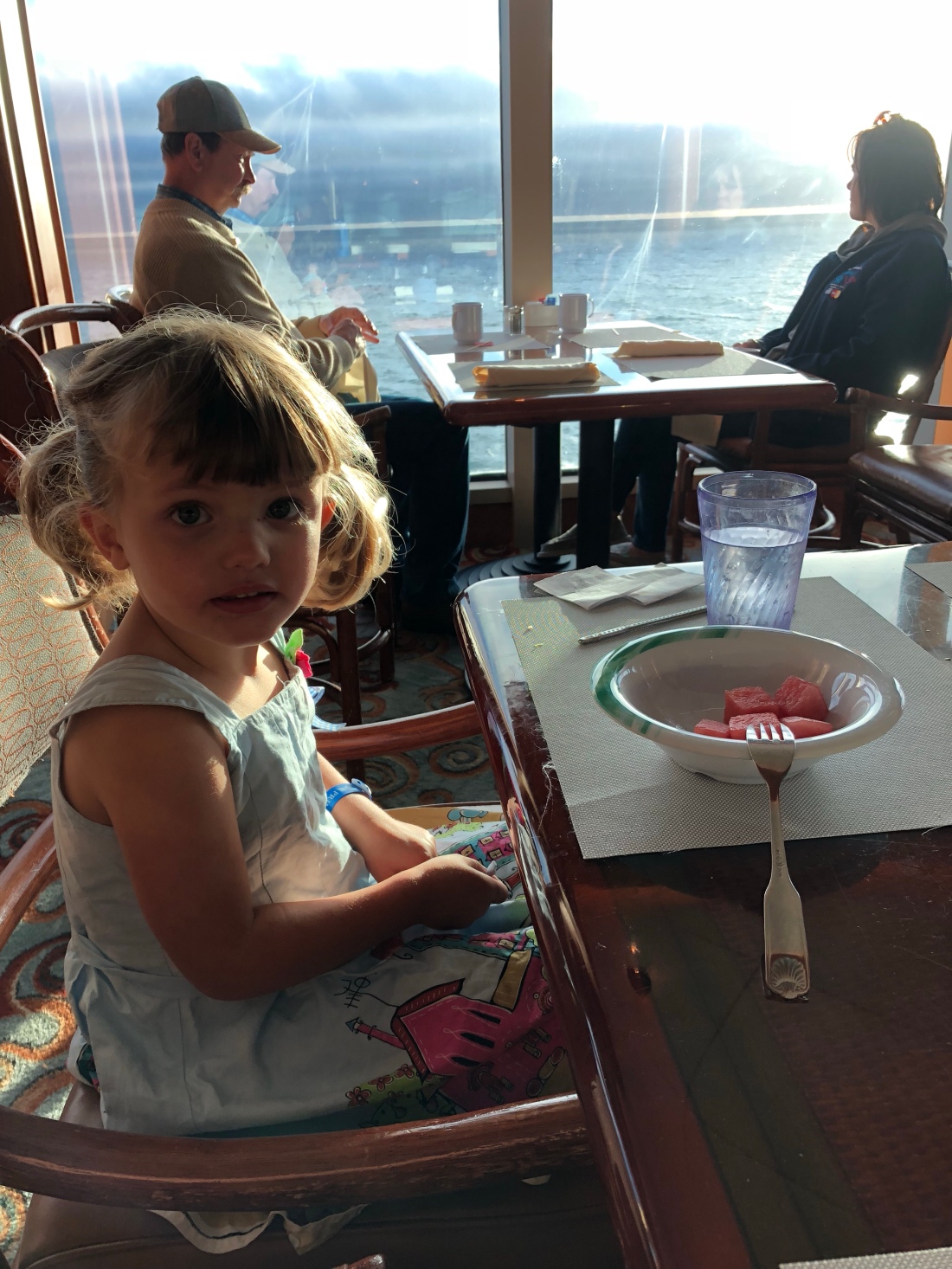 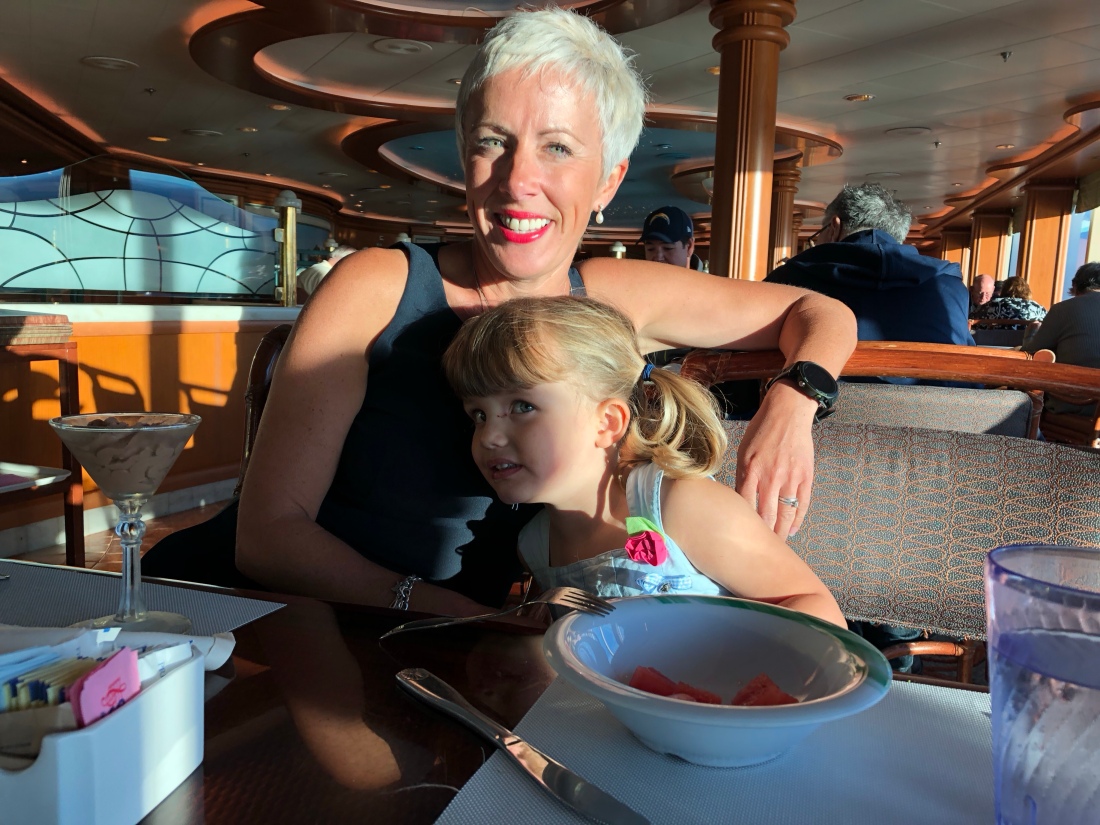 Dinner was uneventful. Bugsy ate brilliantly: fish, chips, broccoli, macaroni cheese and watermelon. I had roast beef with roast potatoes and broccoli, and POI had a salad platter, followed by turkey. Dessert was fruit. And a chocolate mousse. Well, I had been spinning earlier that day…!

Back at the cabin, Ian did Bugsy’s bath while I tried, yet again, to upload the photos to the blog. I think I will have to try using a 4G signal on land tomorrow. She had her stories with Ian, and as I type this up (at 21:30) she is still awake, and currently making puffing noises. No wonder she sleeps in so late in the mornings!

One thought on “Crushin’ on the mushin’”