Bugsy woke up at a far more reasonable 08:00 this morning having slept through the night. She joined us for morning cuddles before we all got up and dressed so we could call Sammy Pants to wish him a happy birthday! The eldest of the crew!!

They were out having a lovely day, so we left them a birthday video message, and frittered away the next hour or so, researching our time in Canada and booking Mum’s flight to New Zealand. She is going to join us for a couple of weeks in November and we are so excited already!! Ian has gone mad and suggested a week in Vegas after our cruise (on account of it being way cheaper to fly there and have a week in a nice hotel, than staying in Canada!!) then having just two weeks in Canada after that. Sounds like fun to me!

Ian and Bugsy then wandered up to the office to exchange Antz for Finding Nemo, and we secured the RV, so we could drive up to Coos Bay, about an hour away, to buy last minute birthday presents, balloons and cake!

We arrived at Pony Village Mall which wasn’t quite how I’d come to picture American malls generally! It was quite small, with several nail bars, a Naval recruitment office, and some cheaper-end stores, including a hobby craft place and a DollarLand. Ian took Cornelia off to find a playpark and I dawdled around the craft store and DollarLand filling my basket with balloons, party hats and small gifts.

The play park was locked up. Apparently it belonged to a day care centre based in the mall, so we left the car park and headed around the corner for some lunch in Yeong’s Cafe, the number 2 place to eat in North Bend. Ian was very sceptical initially, as it looked as it was just attached to the gas station, but I think he was pleasantly surprised! He had a burger with avocado, I had the Hawaiian chicken salad and a side of onion rings (which were, like all things American, ginormous) and Bugsy had a hot dog. Ian also indulged himself with a peanut butter milkshake and a root beer. No wonder we were both feeling full for the rest of the day!! Cornelia took nearly an hour to eat her hot dog, so we skipped the free ice cream she would’ve had if she’d been quicker, and off we rolled, to the Safeway down the road. 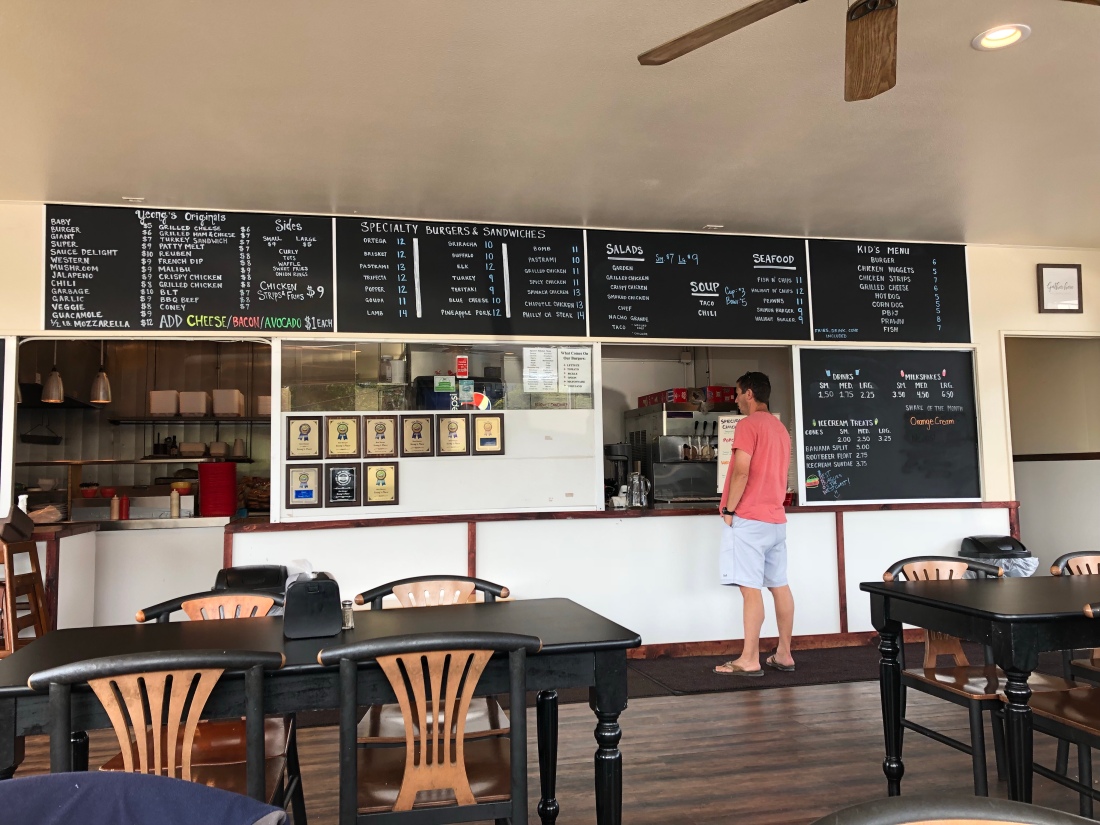 I went in, while Ian and Cornelia stayed in the RV (she’d been trying for a poo all morning, so we knew it was on the way, and the convenience of having a loo onboard is indescribable with a toddler!!). I love this supermarket. All the fruit and veg look fresh, bright and crunchy, the meat looks delicious, and the bakery is crammed full of all the things that I would never buy, but just like to sniff… I found a great chocolate cake for Cornelia’s birthday, and the woman in the bakery asked if I would like any writing on it, so now Bugsy has a personalised birthday cake! I am thrilled and hope she will be too!

After Safeway, it was Ian’s turn to shop at a Walmart. He was on the hunt for the loo block things you have to use in the RV. Slightly less exciting and a lot less sniffable than my shopping trip, one hopes.

Well, he returned 45 minutes later glowing with excitement. It is, apparently, the largest supermarket he’s ever been in. It has whole sections dedicated to camping and RVs that are bigger than whole camping stores at home. Mile after mile of shopping heaven! He was glad he didn’t buy anything other than the loo blocks, but admitted he could happily have gone to town. In the cycle shop, you could get two decent quality mountain bikes for under $100. I can’t quite believe he didn’t buy anything else… or perhaps I can! 🤔

Eventually we trundled on back to our campsite, and settled in for our evening routine of DVD, supper, train and bed. Tonight’s epic was Finding Nemo – we all love this movie, so all found our spots on the sofas and watched it together. Ian and I were too full for a proper tea, so topped up our tummies with a small chicken salad, and a beer.

Cornelia then went to bed as a three year old for the final time and once she was asleep, we began the time-consuming but happy task of wrapping her presents and decorating the RV. She is going to be so excited tomorrow!