Due to the unexpected late night yesterday, Cornelia woke up at about 09:00 and immediately asked if she could go and play with Tess.  We had already suggested that they join us for our trip to the Trees of Mystery, which they were up for exploring with us, and offered to take us in their car, meaning we didn’t have to unhook the RV with its various pipes (they had a big car with a trailer).

It was about a half hour drive down there, and the girls played and giggled in the back seat the whole way, casting spells on each other and using force fields to resist… Tess is seven, but is incredibly patient and loving towards Cornelia, who completely adores her.  It is so sweet to see her with a new friend, at last!

The Trees of Mystery surprised us all by being much more interesting and fun than we had given the attraction credit for.  As you walk into the entrance yard, there is a huge (and I mean, huge!) mechanical giant, which totally fascinated Cornelia.  The giant conversed with the children, and Cornelia was able to ask him all sorts of questions, and she was absolutely thrilled to bits to be talking to him!  We were all looking around trying to find out where the man was, who could hear her, but he was completely hidden away and we had no idea where he was!  The giant was, in fact, Paul Bunyan, and next to the statue was his equally large blue ox, the aptly-named Blue.  The kids posed for photos on Paul’s foot and went to scratch the Blue’s balls, which was hilarious. 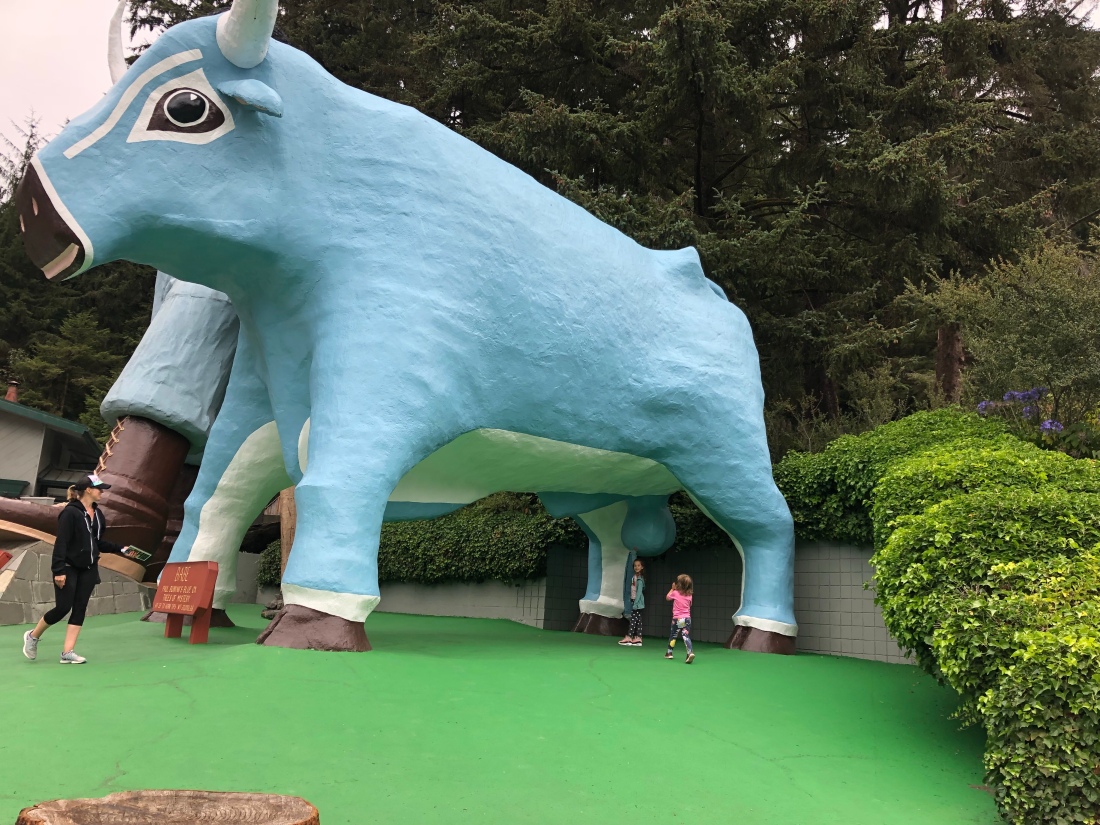 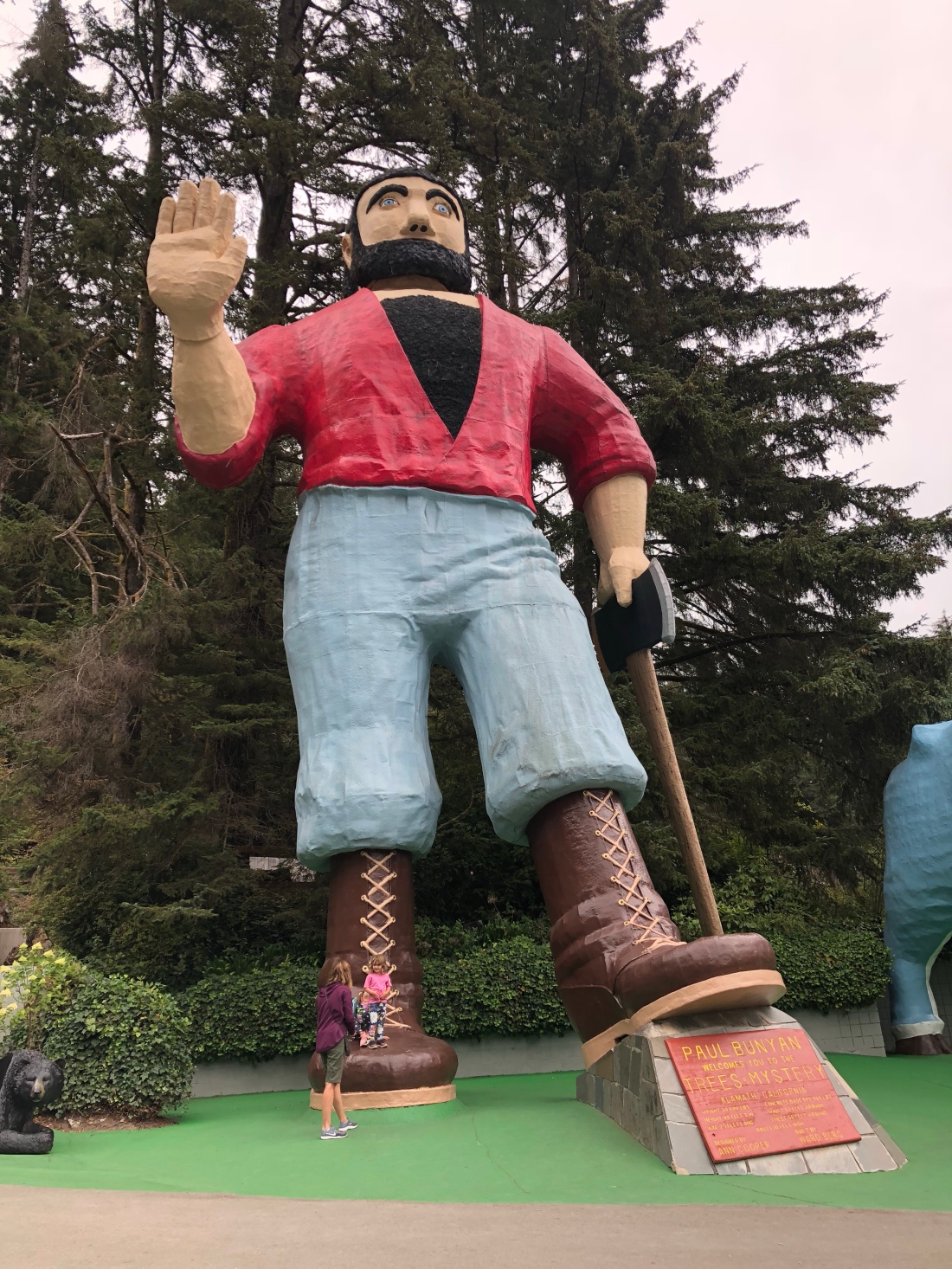 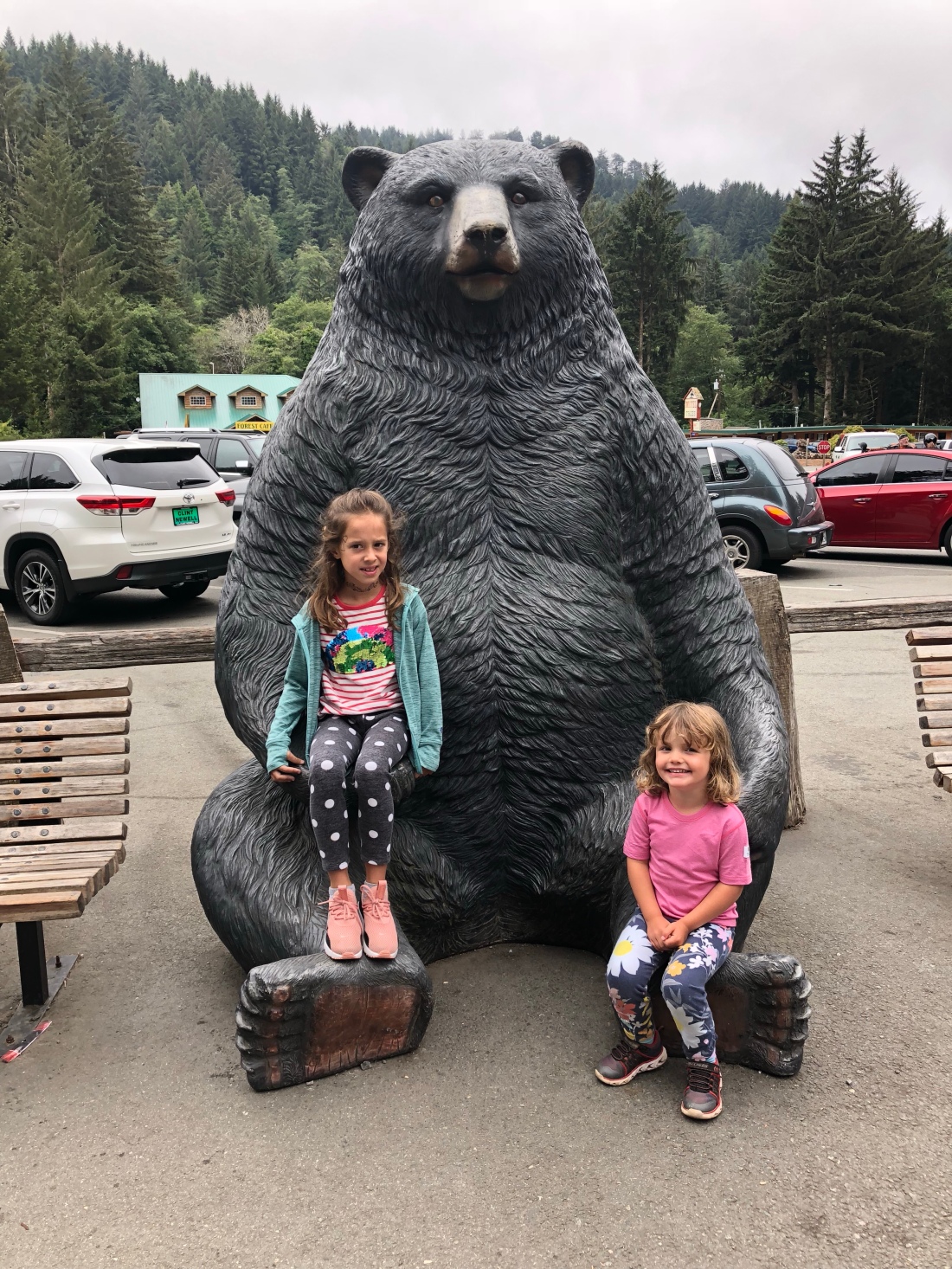 We bought our tickets for the trail, which leads you into the woods, full of different types of trees: redwoods, spruce, cedar and so on, but the trail was interrupted with fascinating trees, such as The Cathedral Tree (in front of which people have actually been married), and the Elephant Tree.  We had also bought Tess and Cornelia a Scavenger Trail card each, and they had fun finding all the different things to tick off (about 40 items in total, I think!). 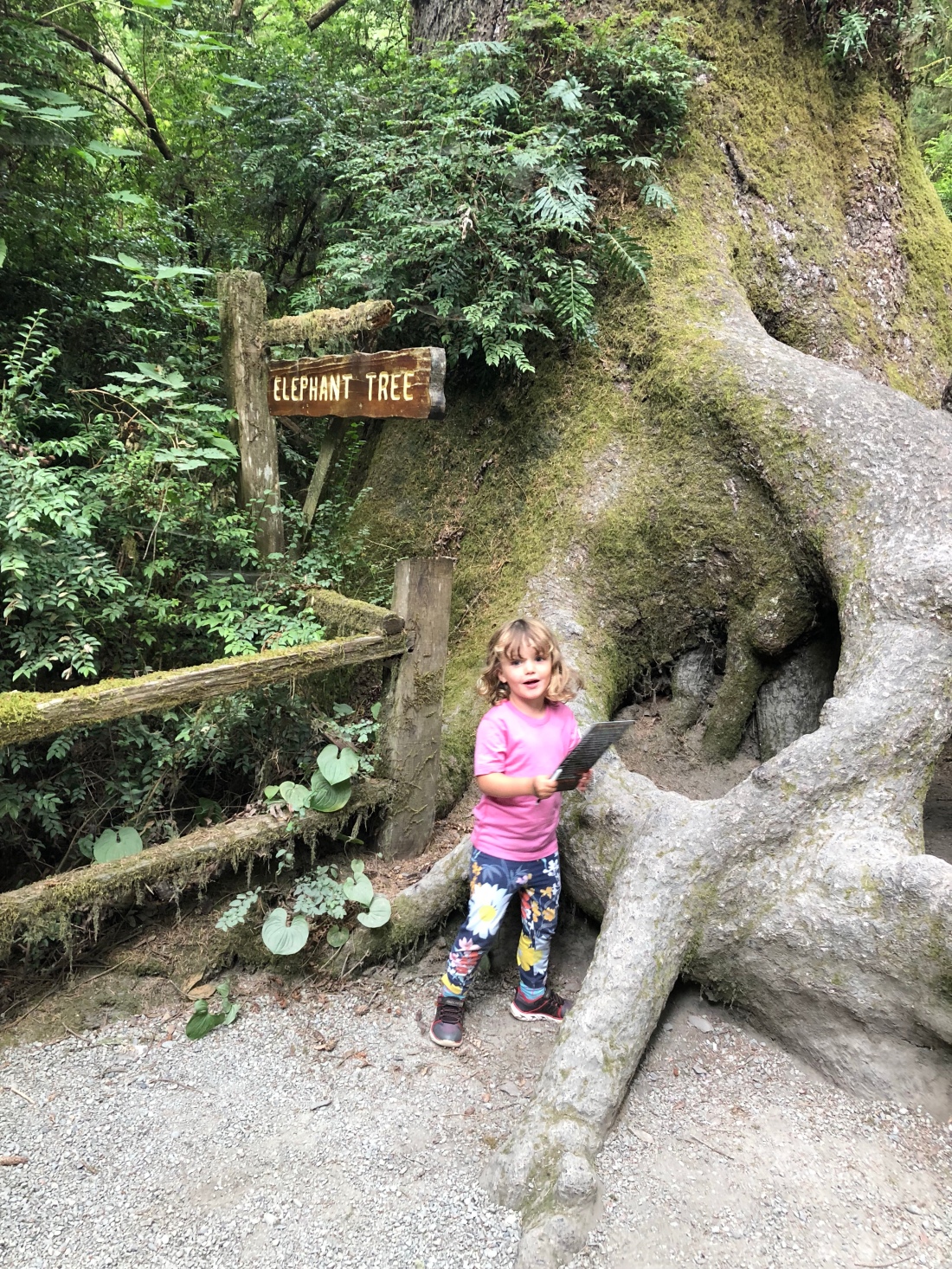 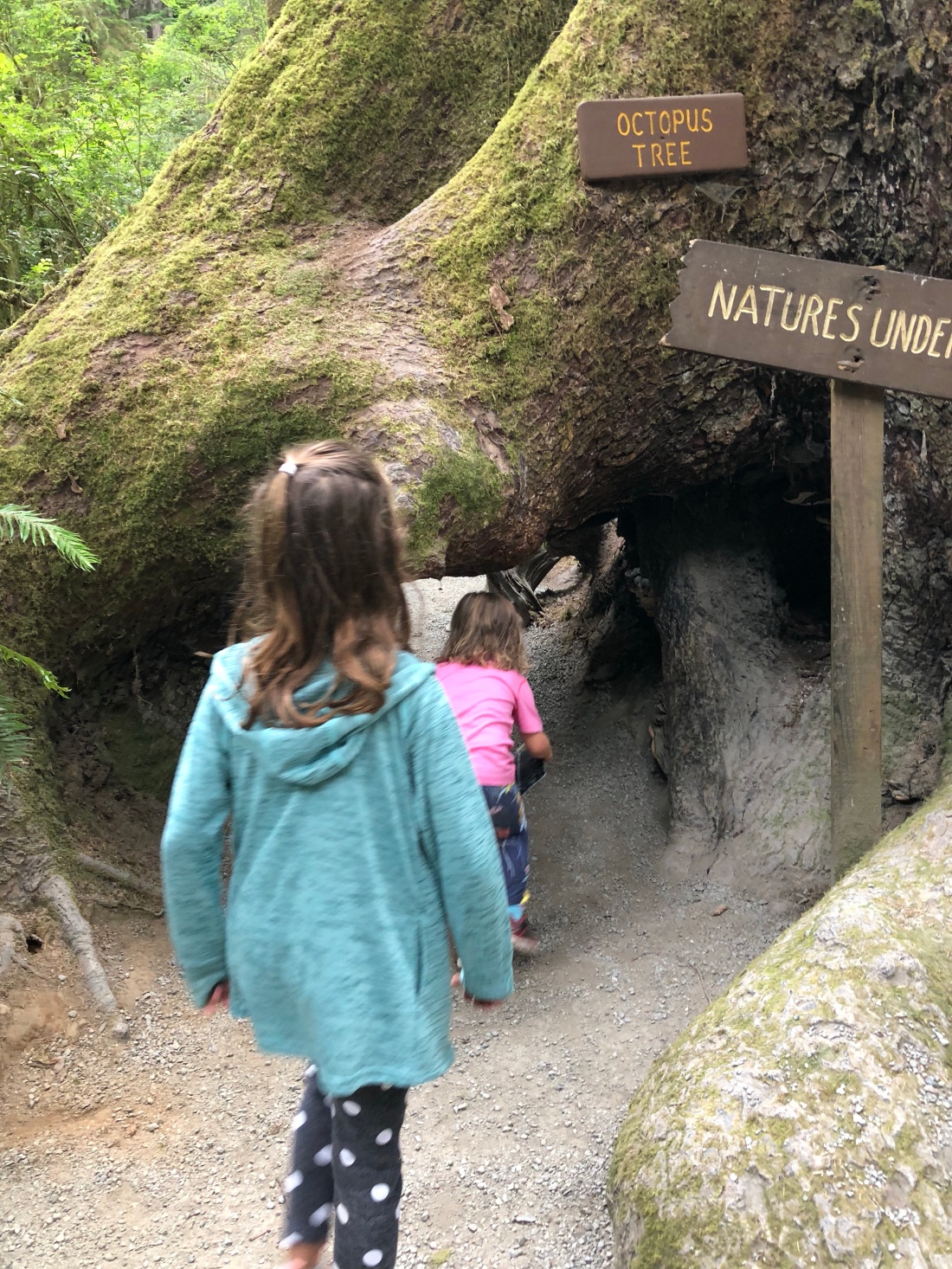 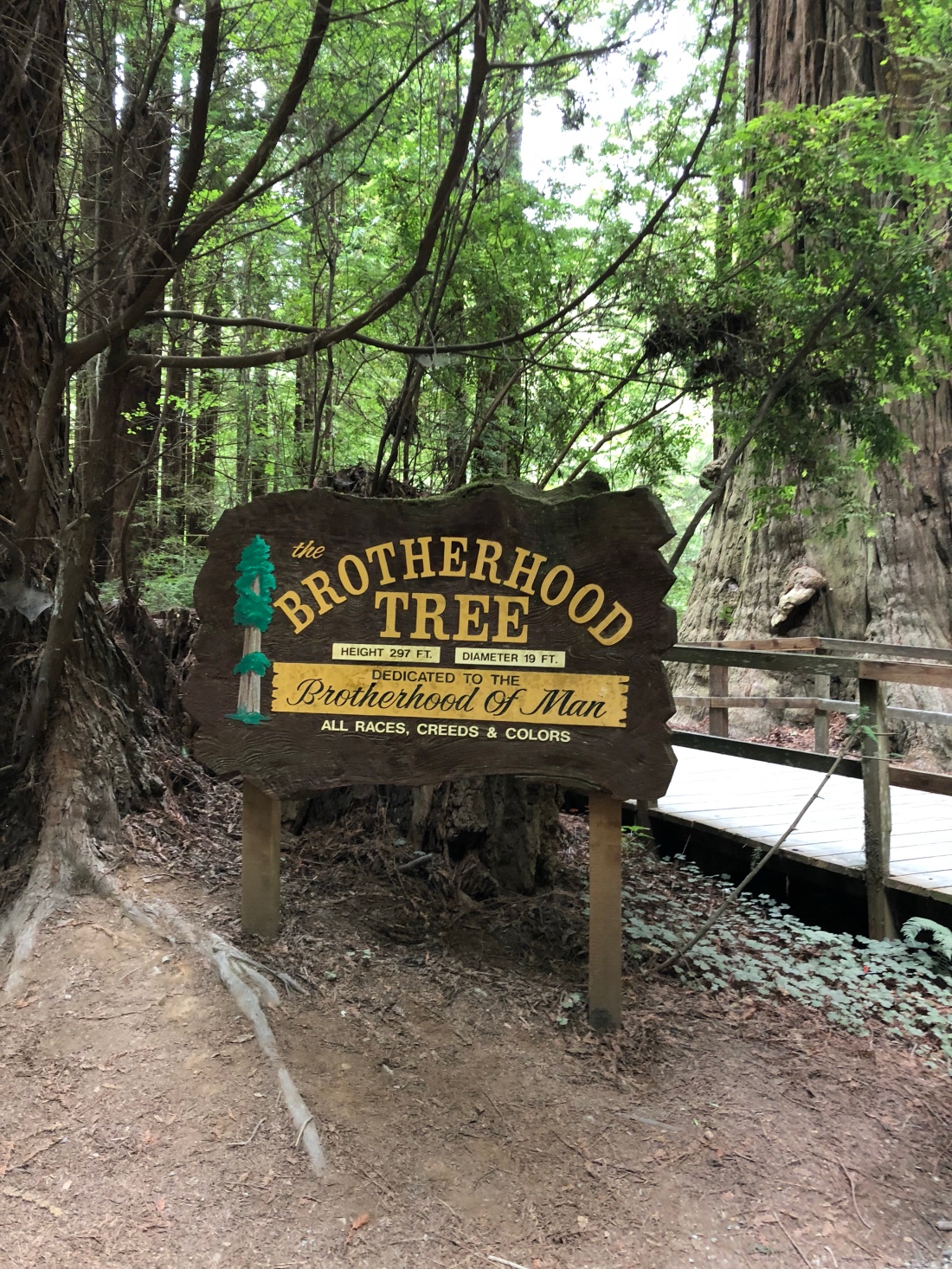 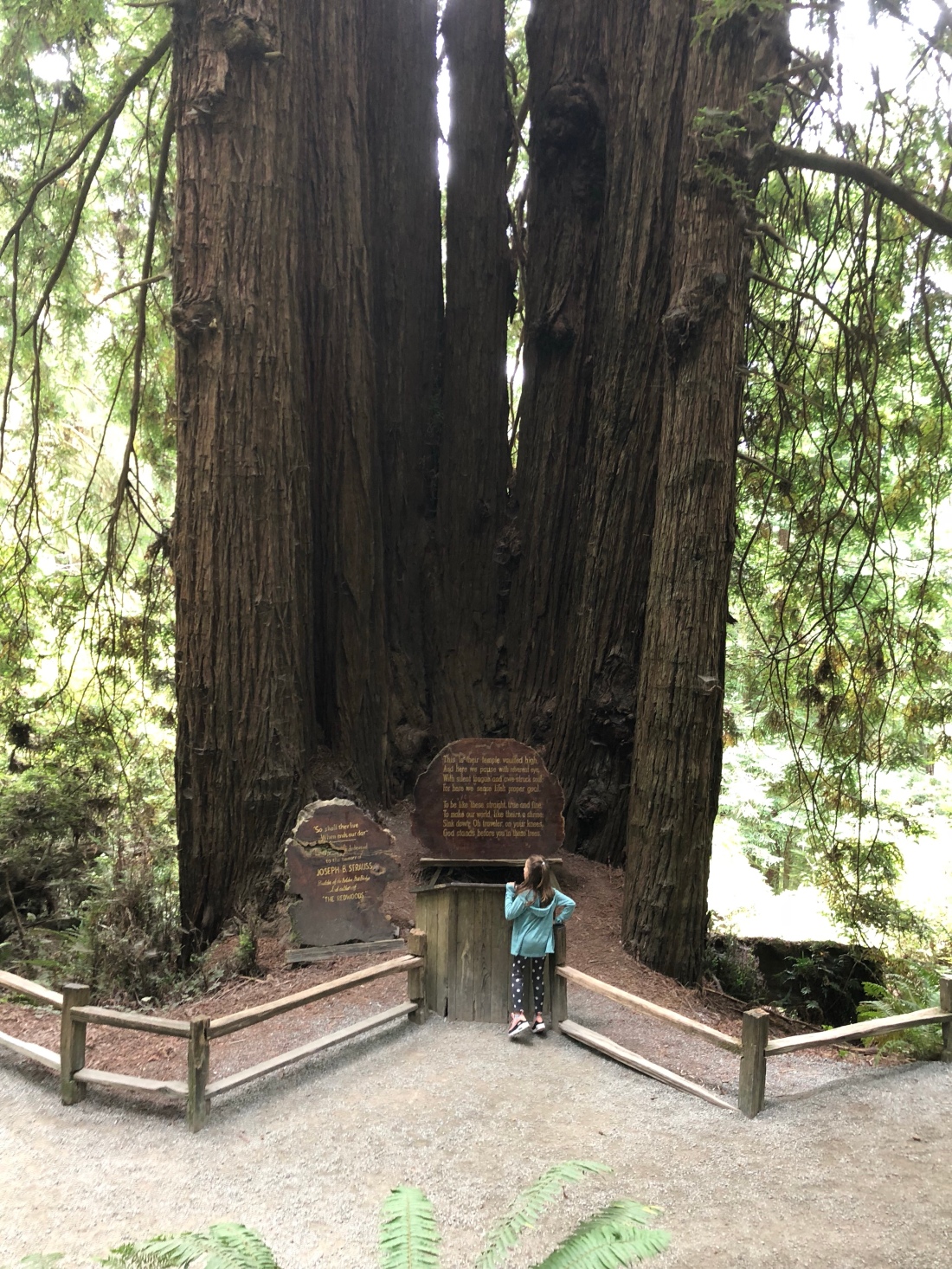 But never mind the trees…. the girls became caterpillar defenders… there were dozens of the things on the path, that had been squashed underfoot by unaware visitors.  Cornelia and Tess saved as many as they could, easing the caterpillars onto a stick and taking it safely to the side out of harm’s way.  It became a bit of an obsession, and meant that the adults could enjoy the trees at a leisurely pace, while the girls perfected their rescuing skills. 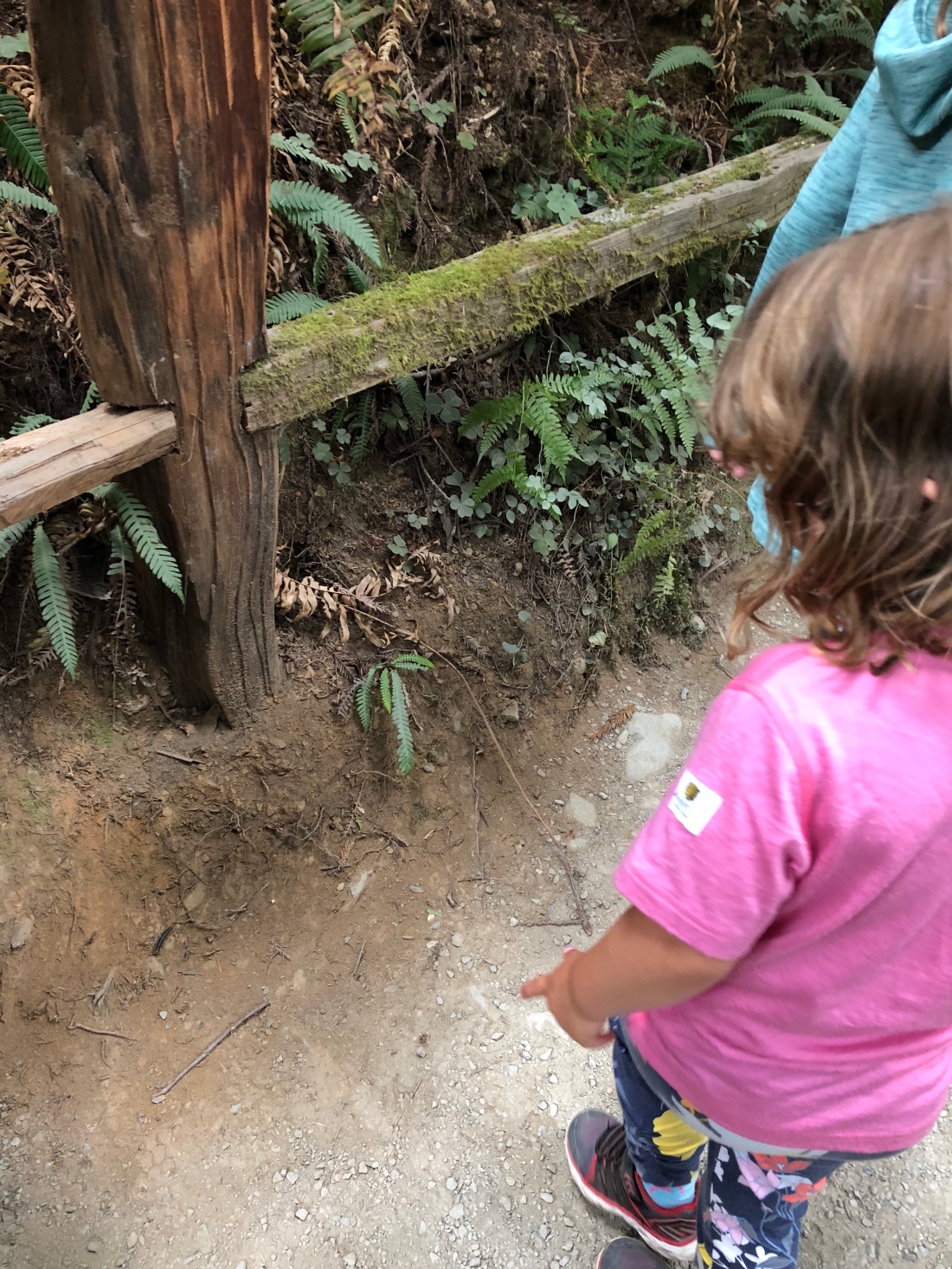 Eventually we arrived at the main attraction, a gondola car which swung us slowly and steadily up through the tree tops and deposited us at the top with fabulous views around us (as far as the clouds would allow).  I bet on a clear day, you could see for miles, but today was not that day. 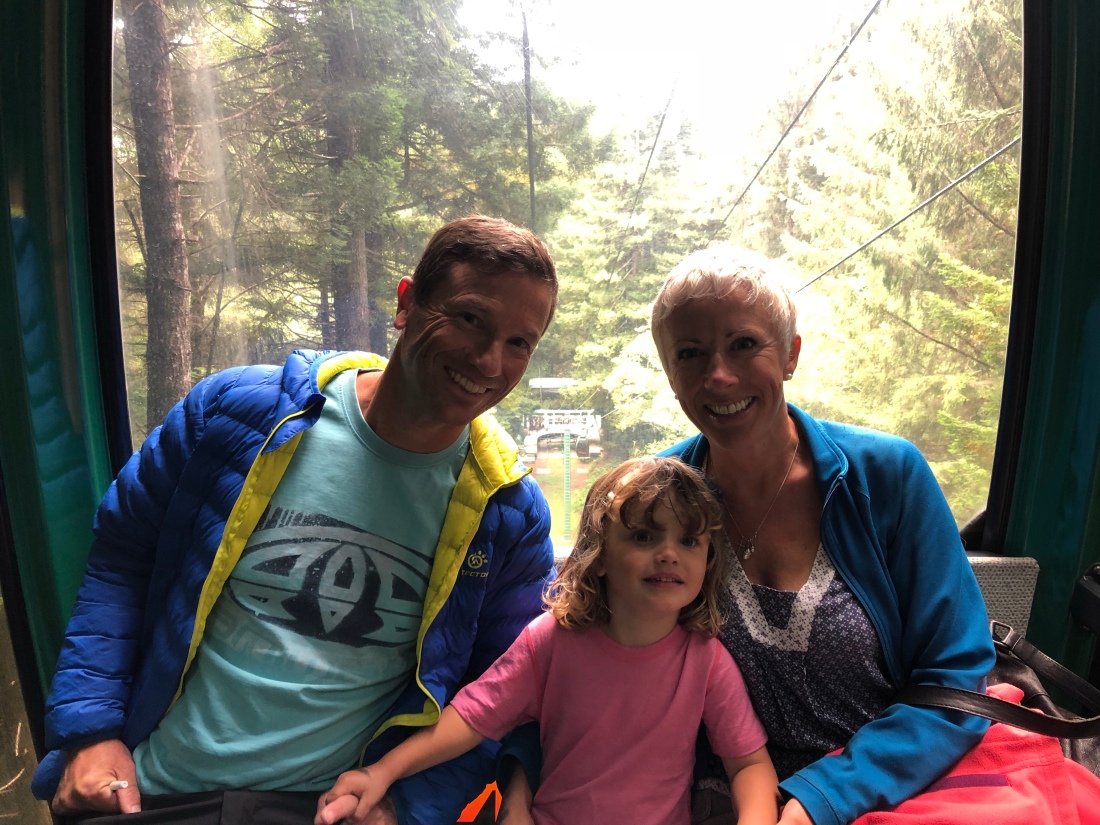 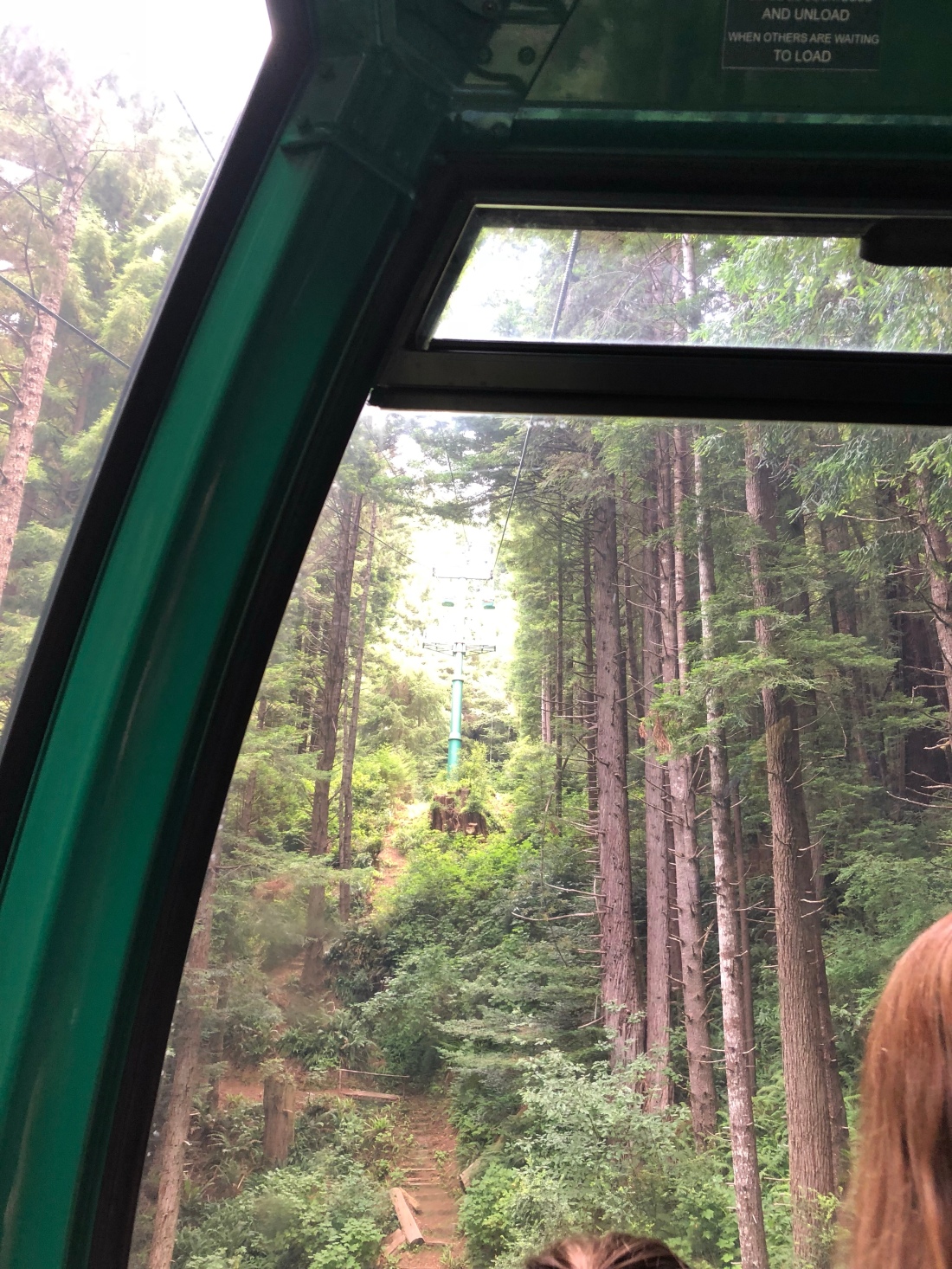 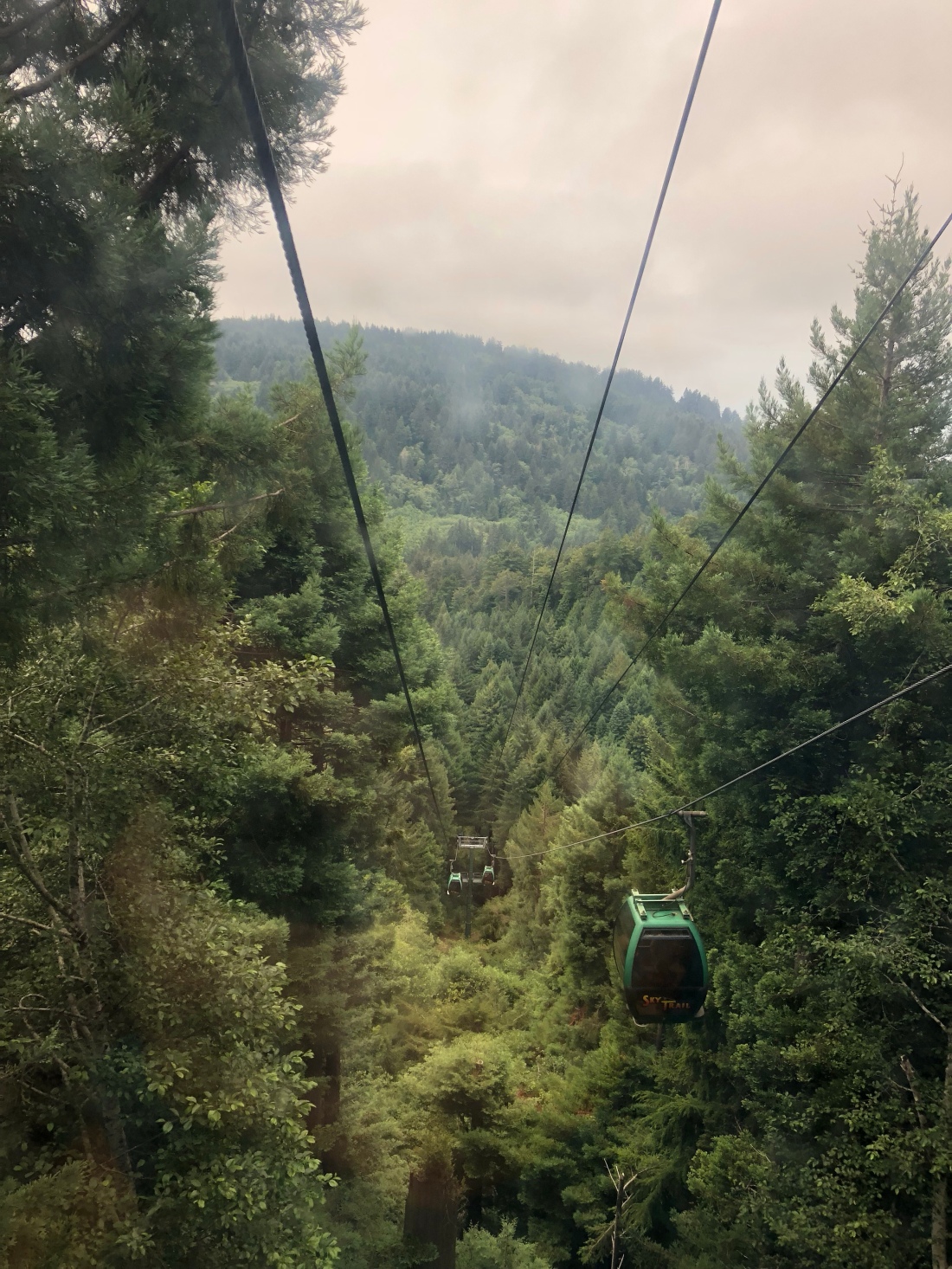 The time up there was slightly disturbed by a very peculiar boy who was much bigger than Tess and Cornelia, but seemed to make it his mission to get “in their faces”, quite literally at one point, backing Tess into a corner.  Luckily, she managed to get herself away from him (with Cathy and I trying our best not to run over and grab him ourselves!), but it was all a bit odd and unpleasant.  Rather than highlight this to the girls, we told them it was time to go and get some lunch, and much to their dismay, we told them we were walking down the “advanced hikers only” route – a steep descent of just over a mile, to our starting point.  The gift of free walking sticks was enough to persuade them onwards, and soon we were all making our way cautiously down the – yes, very steep – hillside. 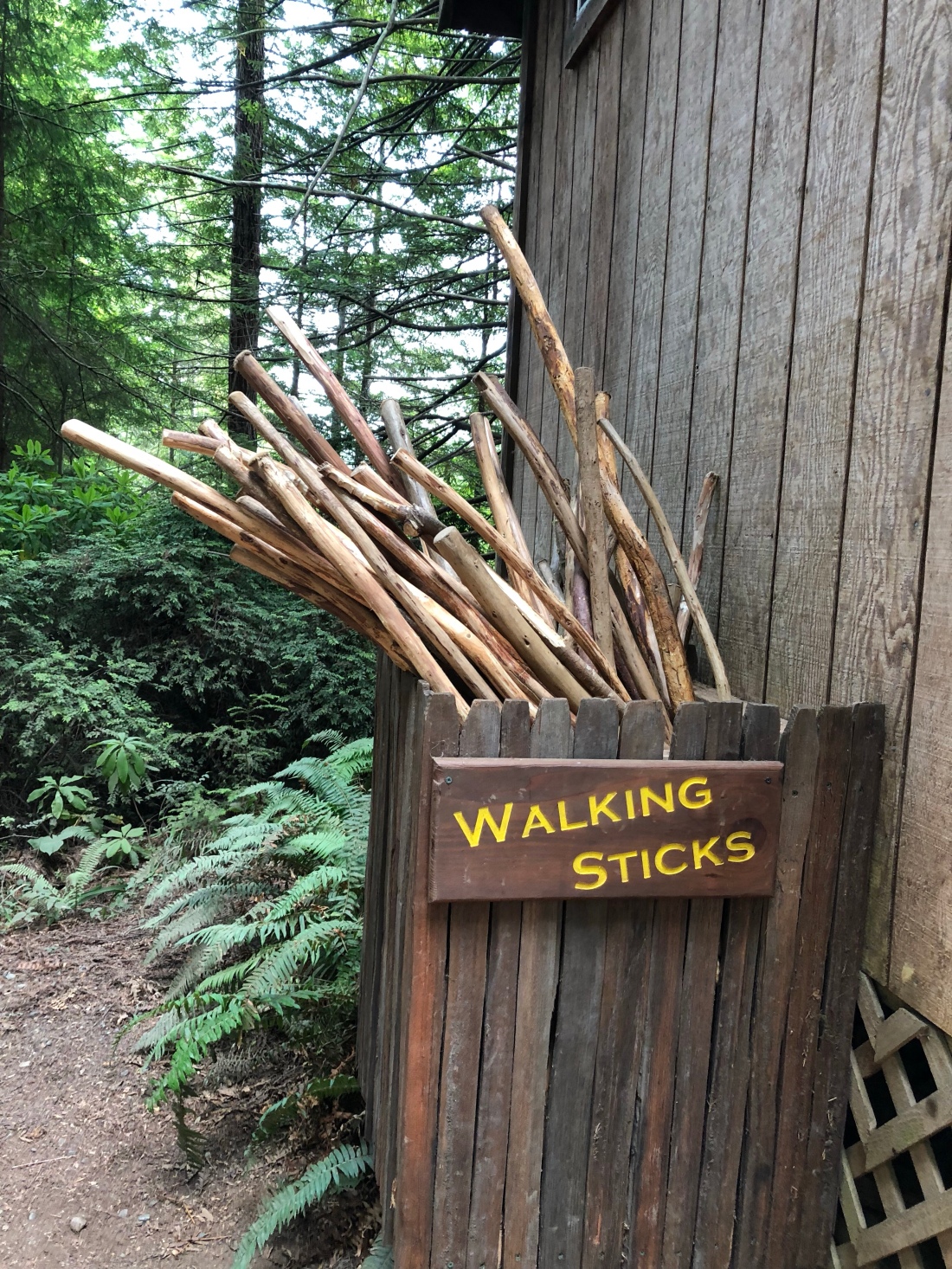 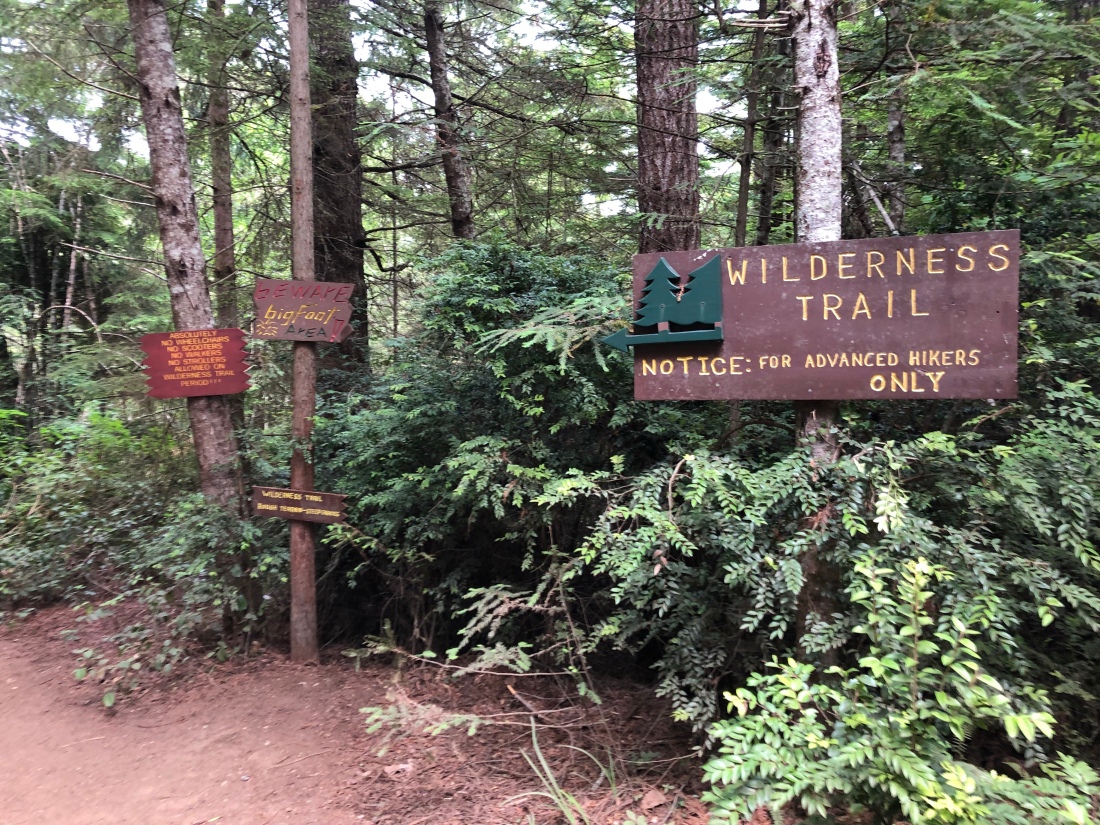 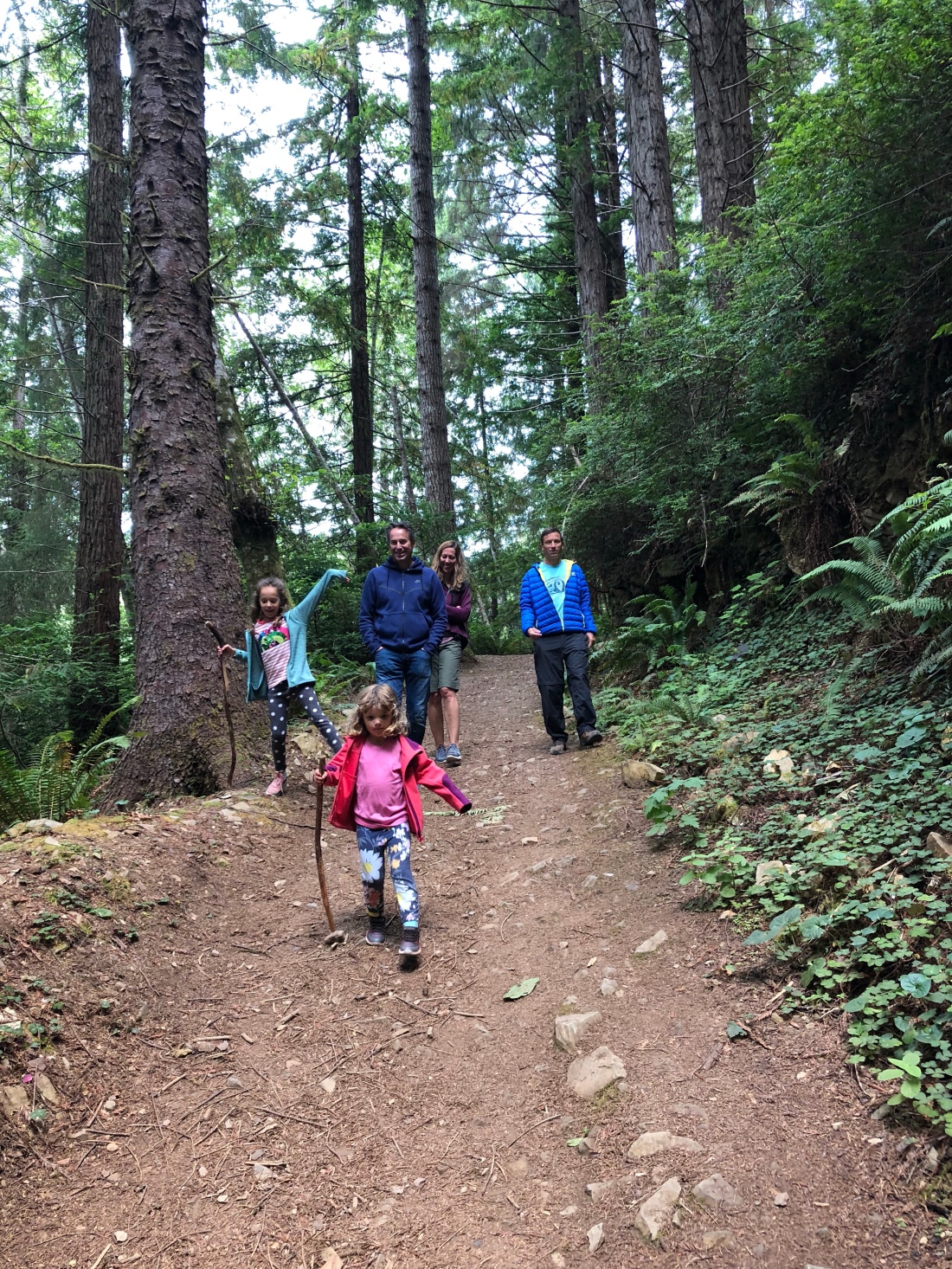 Cornelia and Tess managed brilliantly, although after a couple of tumbles, Bugsy was in favour of having a piggy back on my back for the rest of the way, coming off occasionally on the flat to run with Tess, then returning to me at the sight of an upcoming slope.  She was very good really.  It was a long and difficult route and she didn’t really complain much.  I think having Tess with her really held her back from tears a few times! 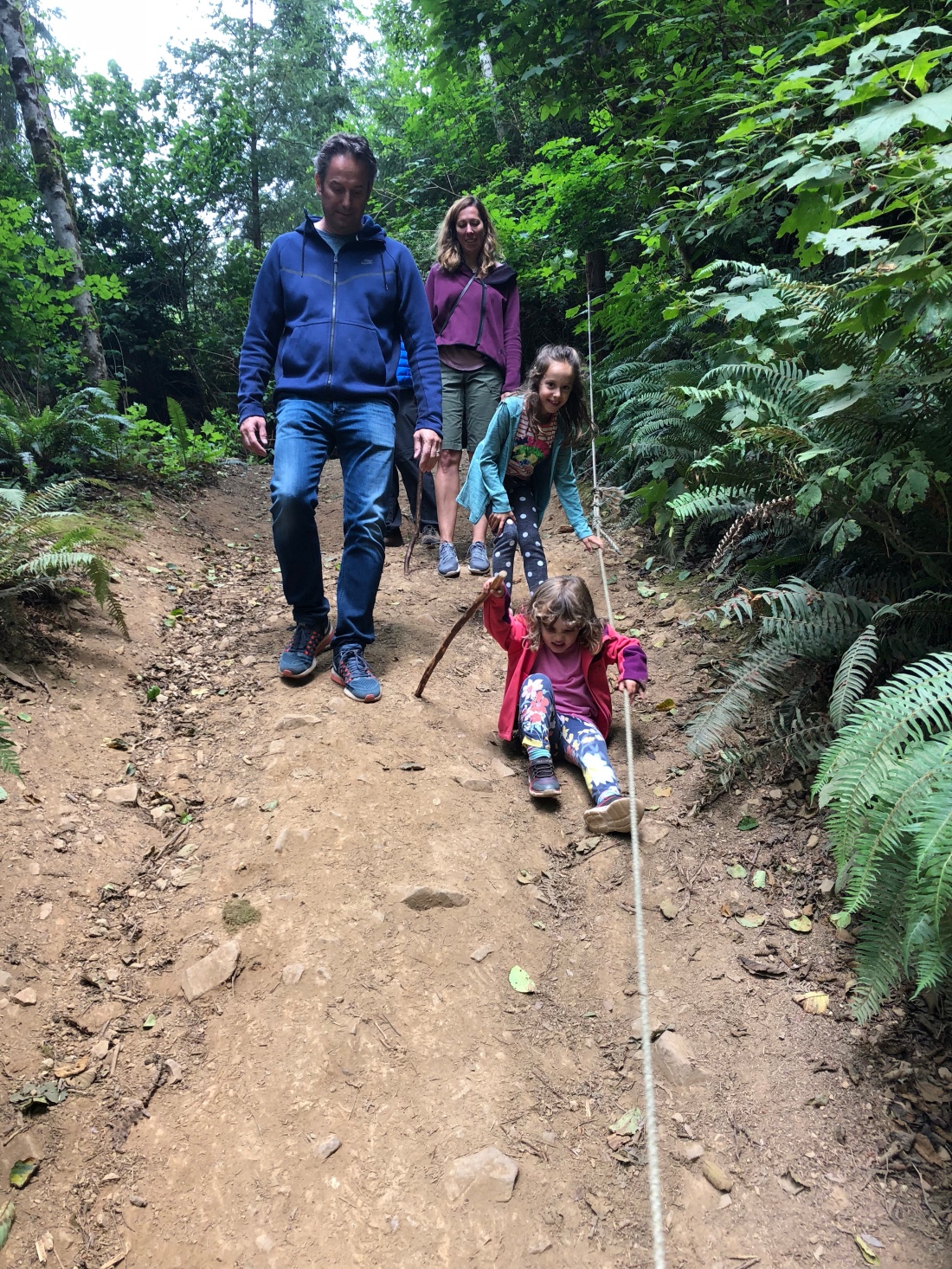 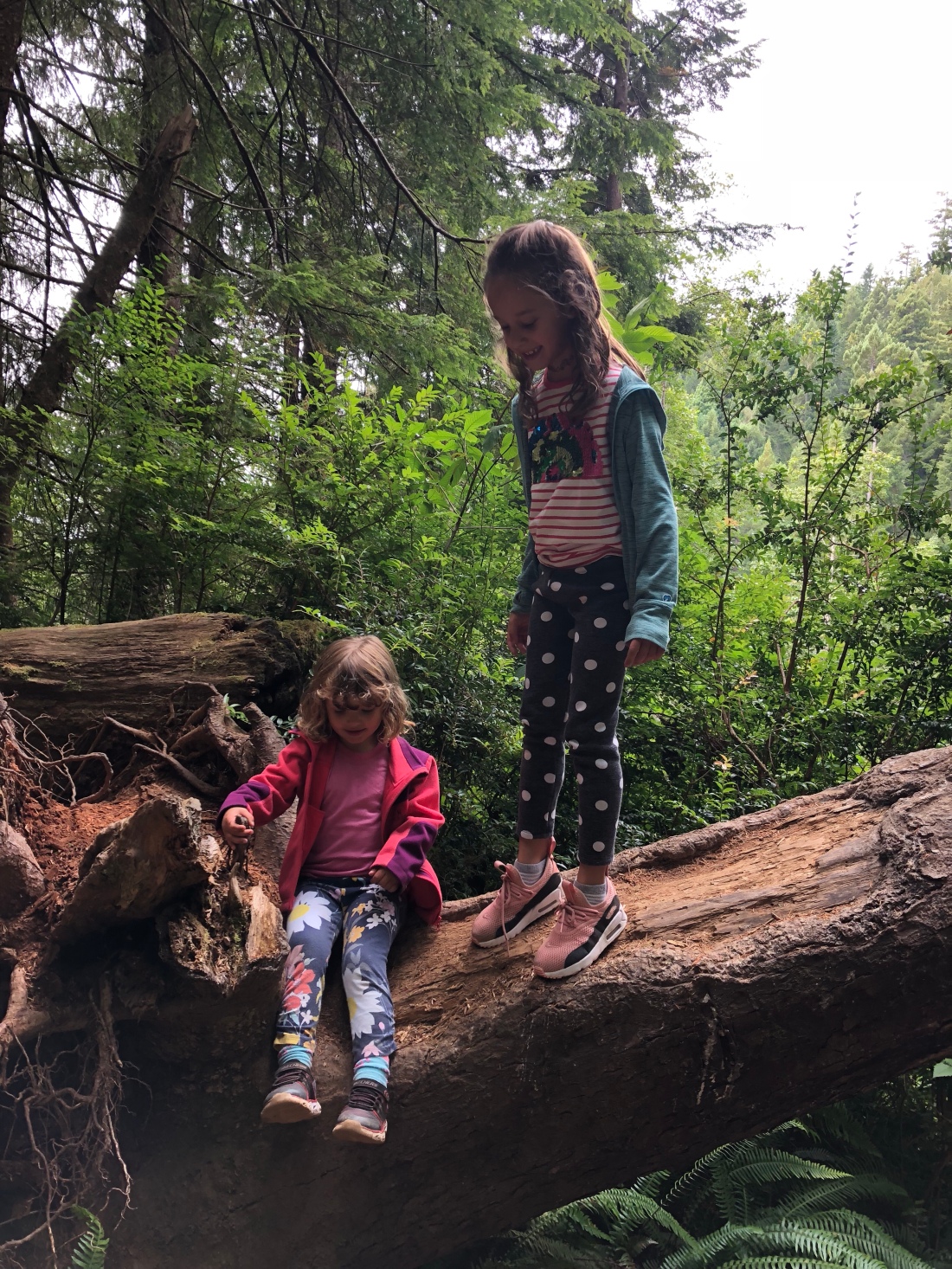 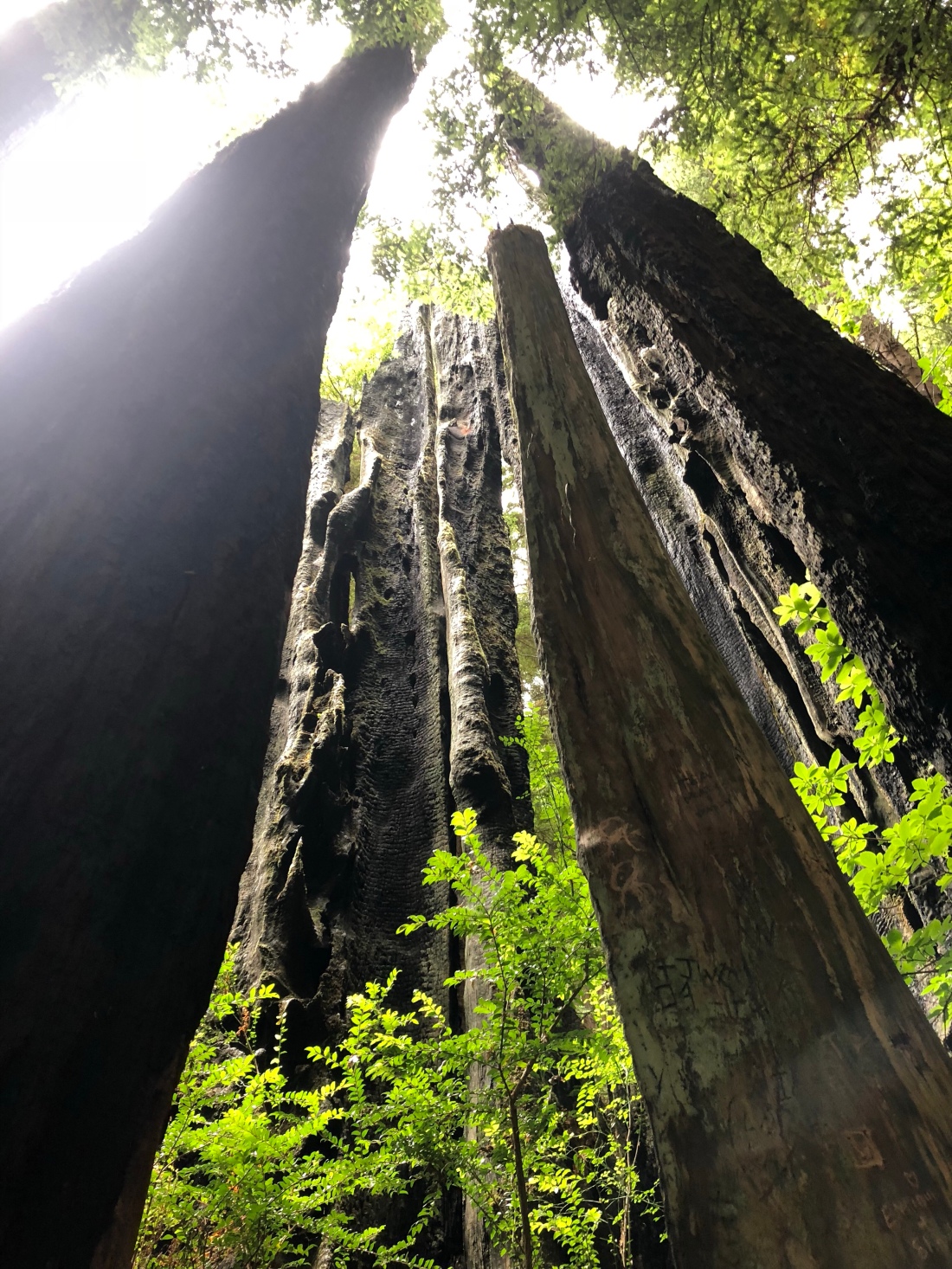 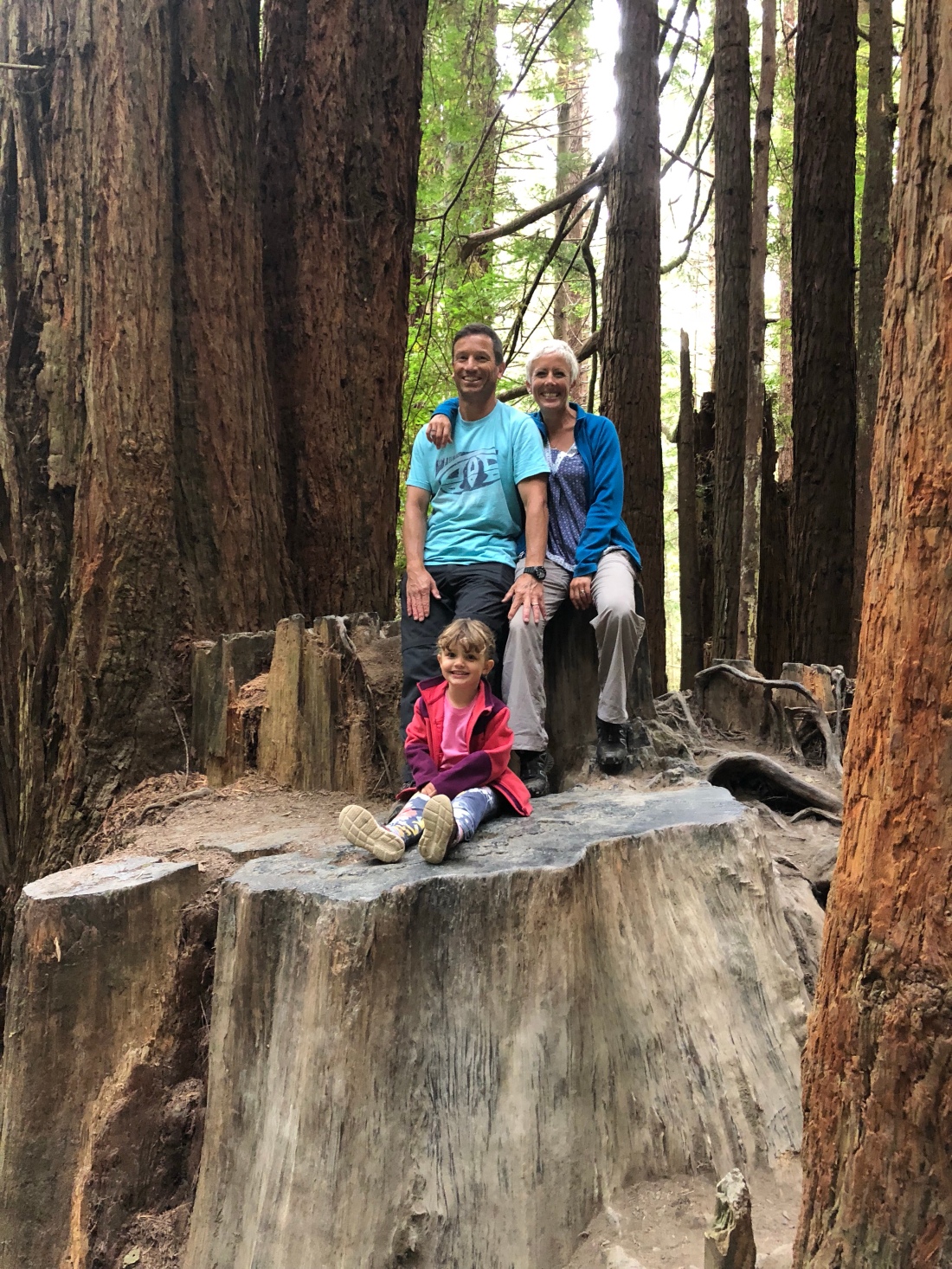 We love that Cathy and Peter are adventurous and outdoorsy, as they were completely on board for walking, climbing on things and letting the girls explore without being impatient, even though we were all getting very hungry!  We had a couple of funny moments too… we had suddenly realised that there were no birds in the woods, and in fact hadn’t really seen any wildlife at all, other than the caterpillars.  Literally a minute later, so a couple of birds flew out of the hedges….  It was as if we were on the Truman Show or something like that, being watched from somewhere, with the birds being released, just to make it all seem “more real”.  Very funny!

Once we’d finished the trail, we crossed over the highway to the cafe for a late lunch.  Now, this was a peculiar place.  It was a large room, with plenty of tables and plenty of space.  We waited for about five minutes before a waitress finally spotted us and was able to push two tables together to create once large enough for the six of us.  It was so weird!  Fake flowers and leaves covered the ceiling, there was a seven foot bear in the middle of the room, and a large mural of the redwoods on the back wall.  Very kitsch, shall we say?! 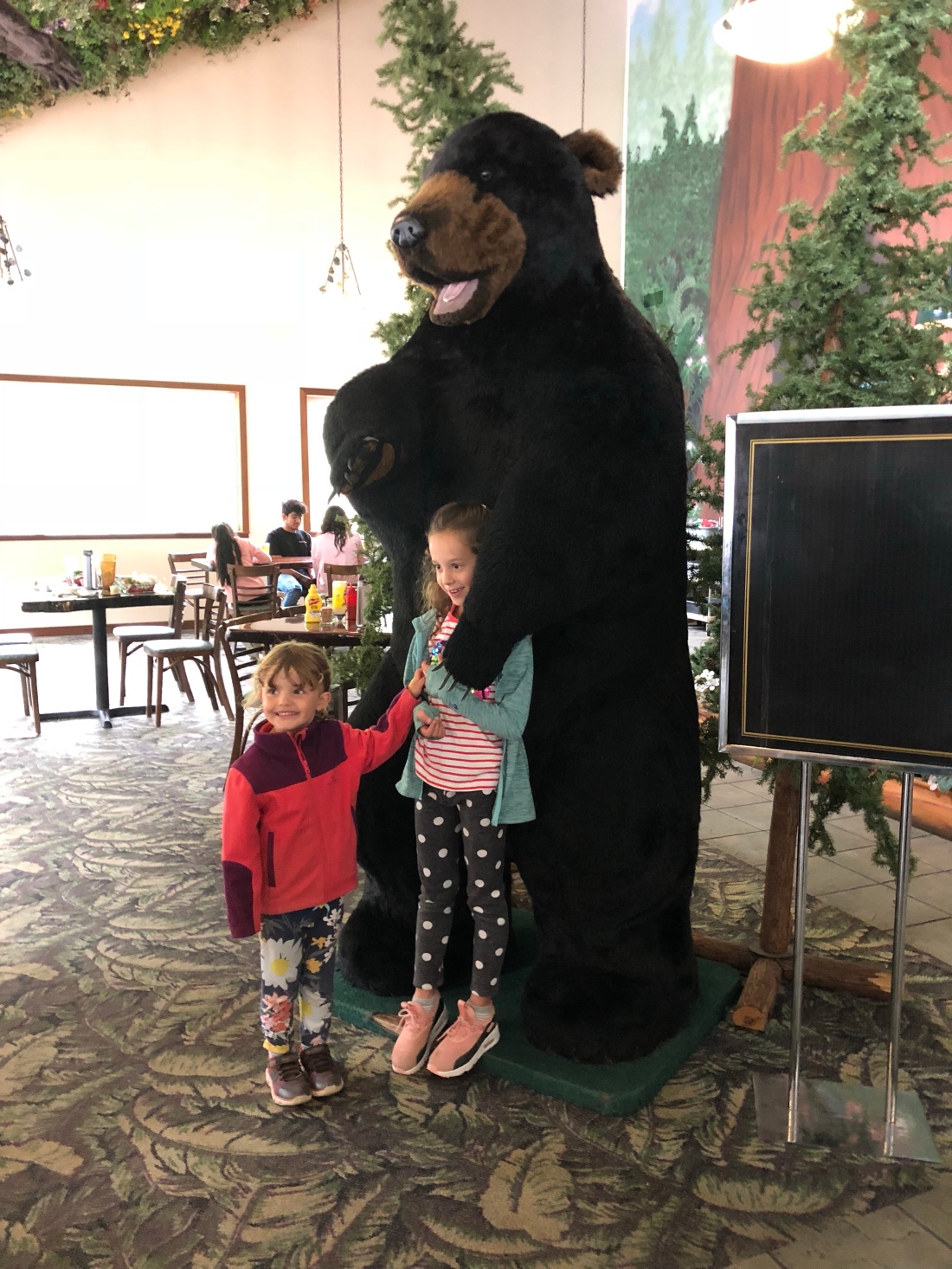 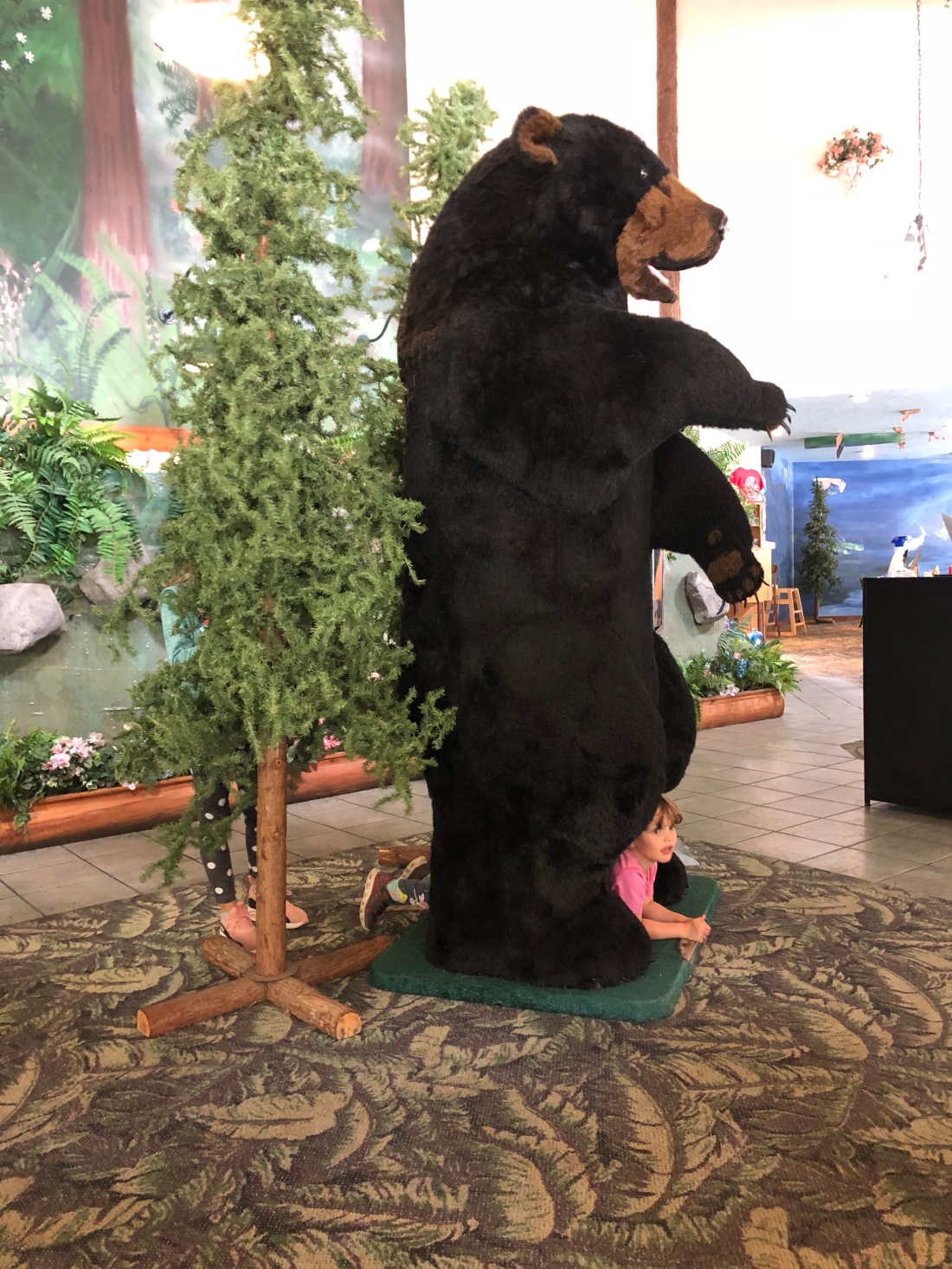 It took ages for us to order, but when the food finally arrived, it was actually really tasty.  I had opted for a turkey, ham, cheese and egg salad, and everything was fresh and crunchy and just the way you would want it.  We were there for about an hour and a half (like I said, it was all rather slow), and after we’d finally paid, we headed back to the giant Paul Bunyan, so that Cornelia could show him the drawing she had done of him, bless her. Unfortunately, there were quite a few children talking to him already, and she couldn’t get his attention, so we went into the gift shop instead, to have a look around and have an ice cream, before trying him again afterwards.  But, as luck would have it, the giant was now in recorded story-telling mode, so Bugsy wasn’t able to show off her drawing or ask him what he had had for lunch. 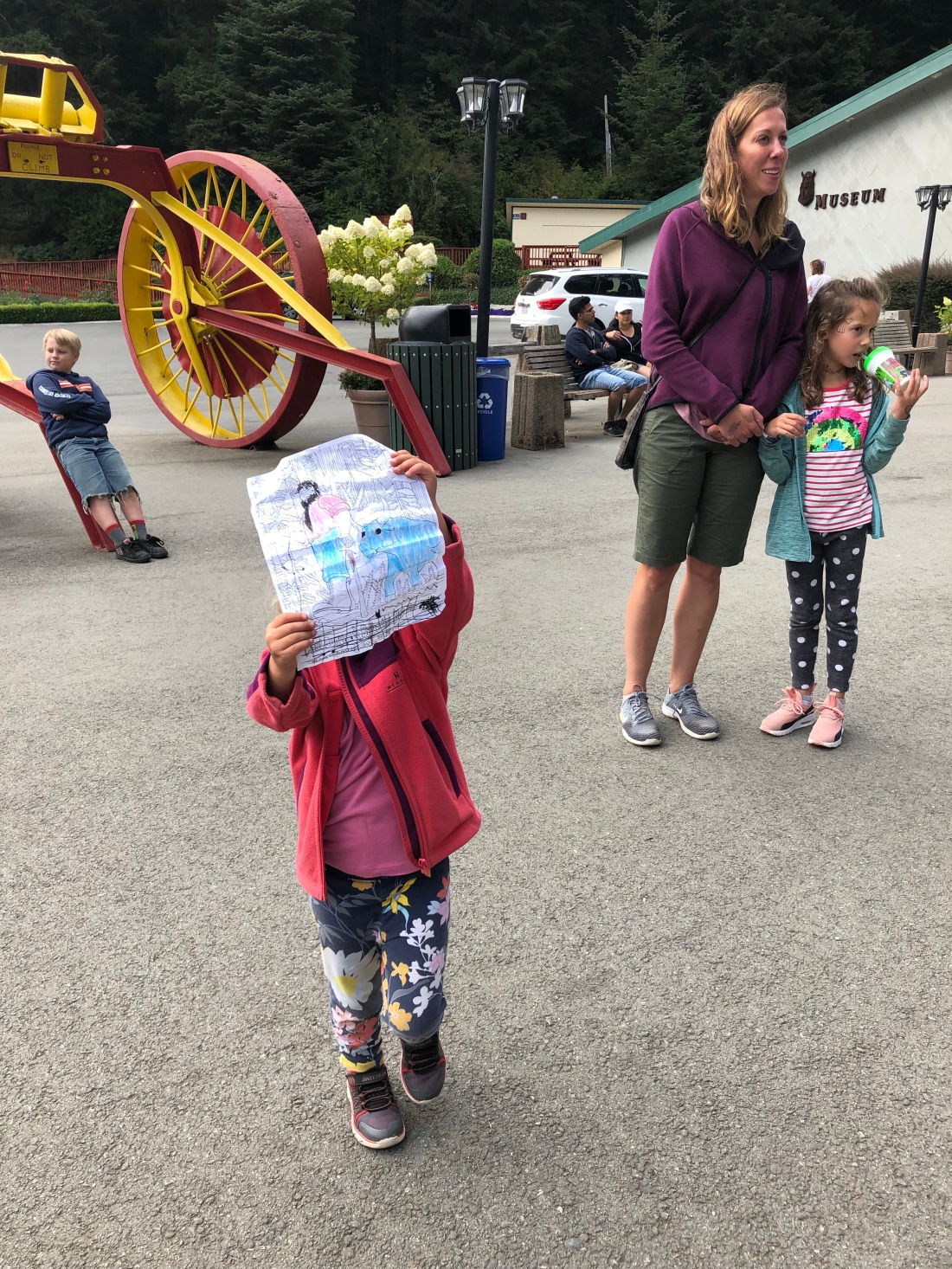 Back at the campsite, we had been invited to Pitch 44 for supper, and while Ian did a treasure hunt for the tired girls, Peter cooked us some delicious chicken with carrots (the secret is to cook them in butter and brown sugar – oh my God, YUM).  We tried to make up for their excellent hospitality by supplying some wine and chocolate.  Winner all around!    Cornelia had gone to bed completely shattered at around 20:00, and we stayed up much later than usual, drinking too much, laughing and listening carefully to their recommendations for our onward journey, which included an invitation to visit them in Portland next week on our way up to Seattle.  What an awesome day! 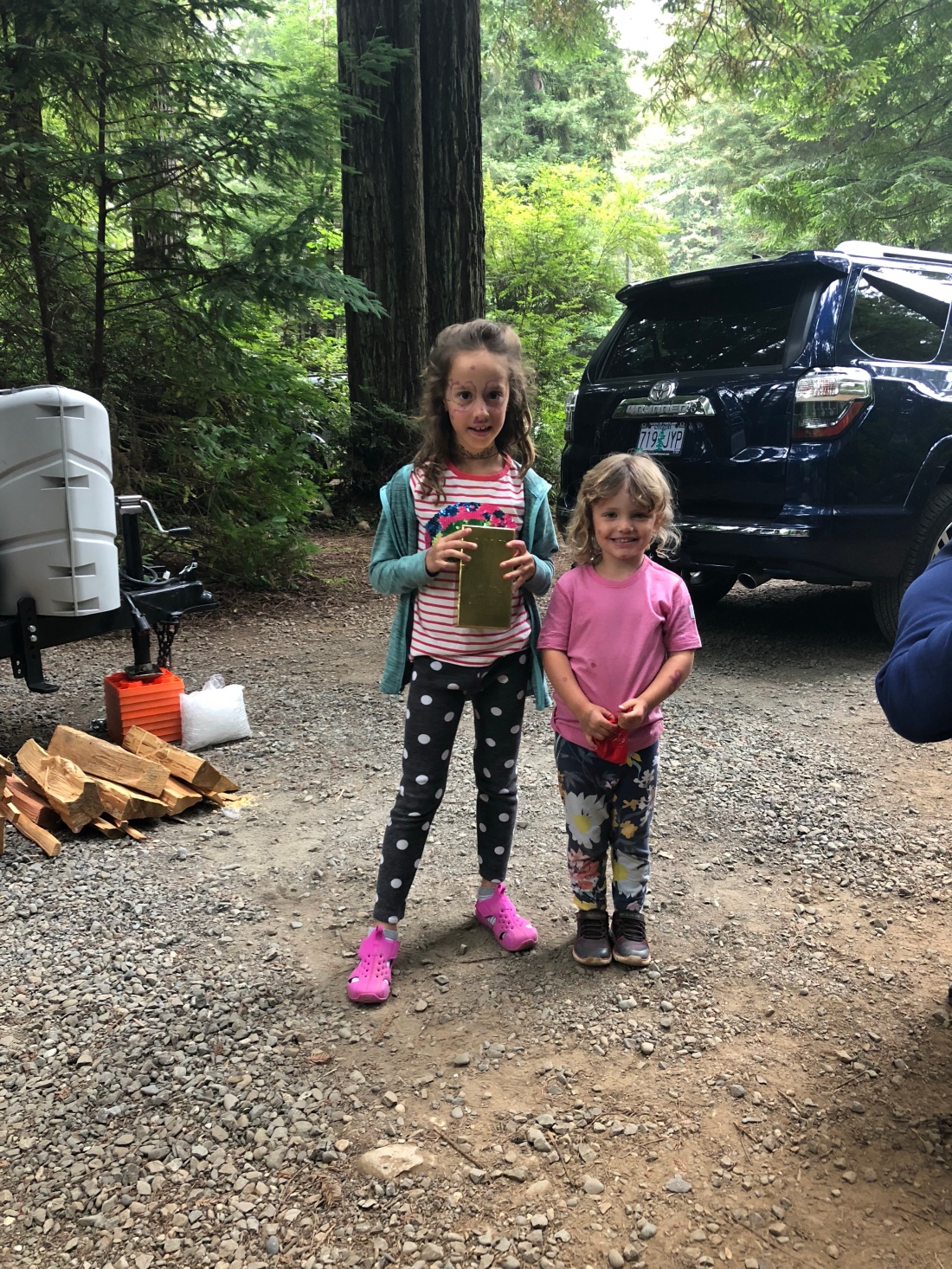