It’s Grannie Annie’s Birthday! Happy Birthday to you! We love you! 😘

Bugsy woke up in another glorious mood, and for the first time, called out for Daddy instead of Mummy! It was a happy start to the day for all of us, and I further sealed my “good day” status by taking myself off for my first run in a week.

I ran down to the sea front and along towards downtown Reykjavík. It’s a peculiar place. About two-thirds of Iceland’s population lives in the capital, but is in no way feels packed out. Instead there is a lot of ongoing construction work, in between modern buildings that seem to be either curved or very angular, coloured grey, white or black, with blocks of almost pastel blues, pinks and yellows. Despite its great age, it does not have an historic feel to it and I found myself mildly disappointed by this. 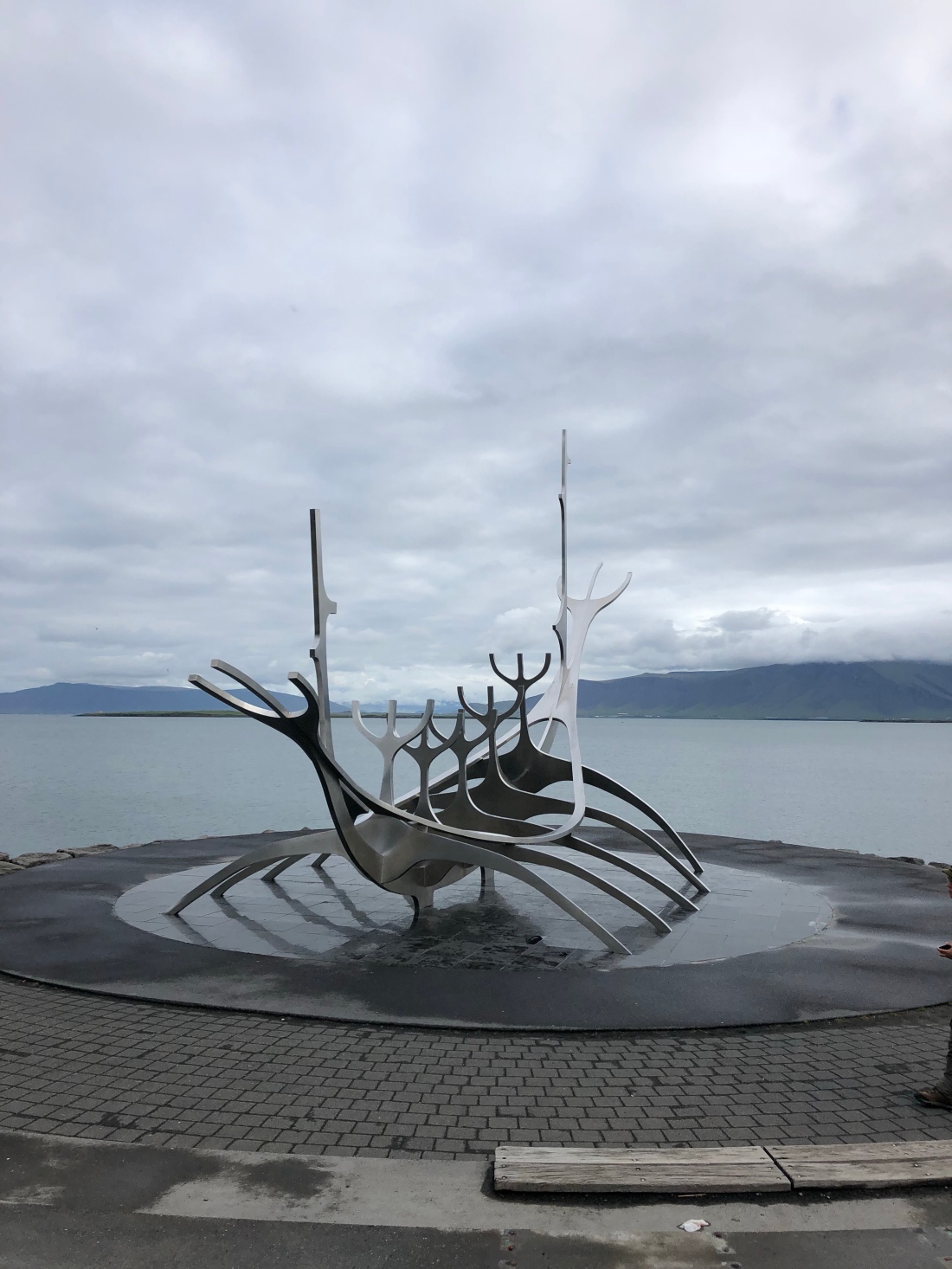 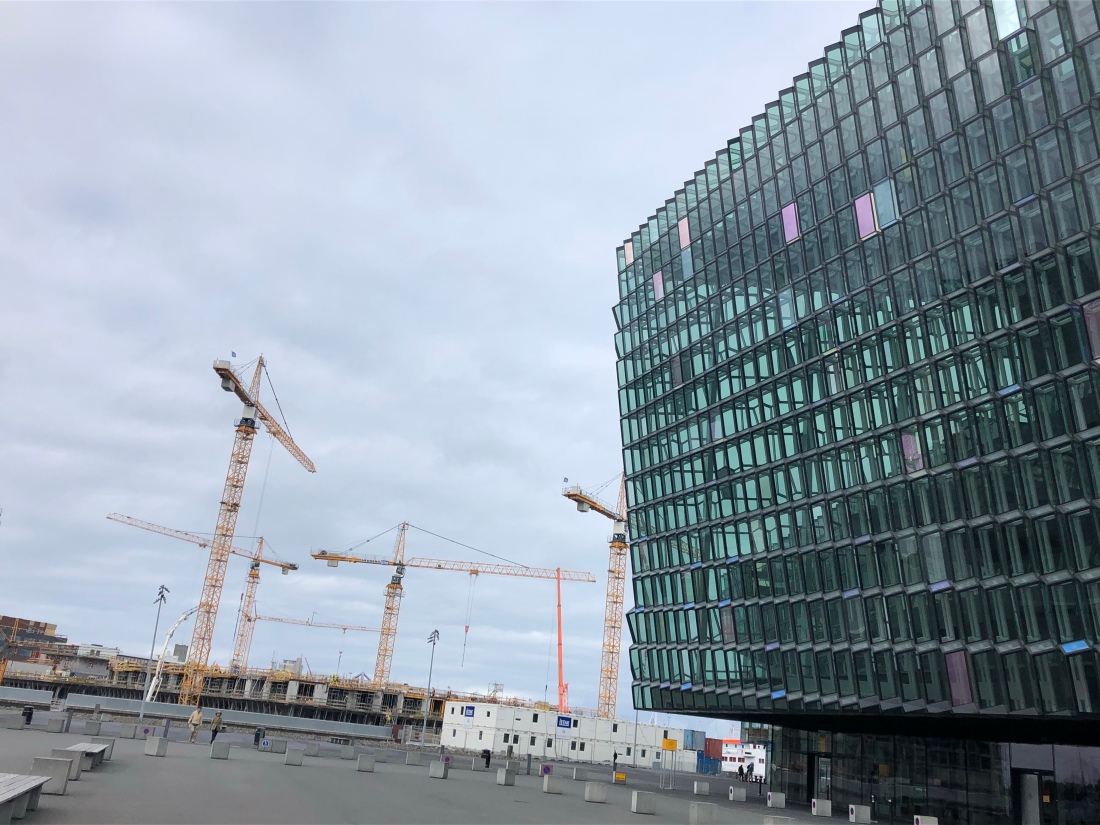 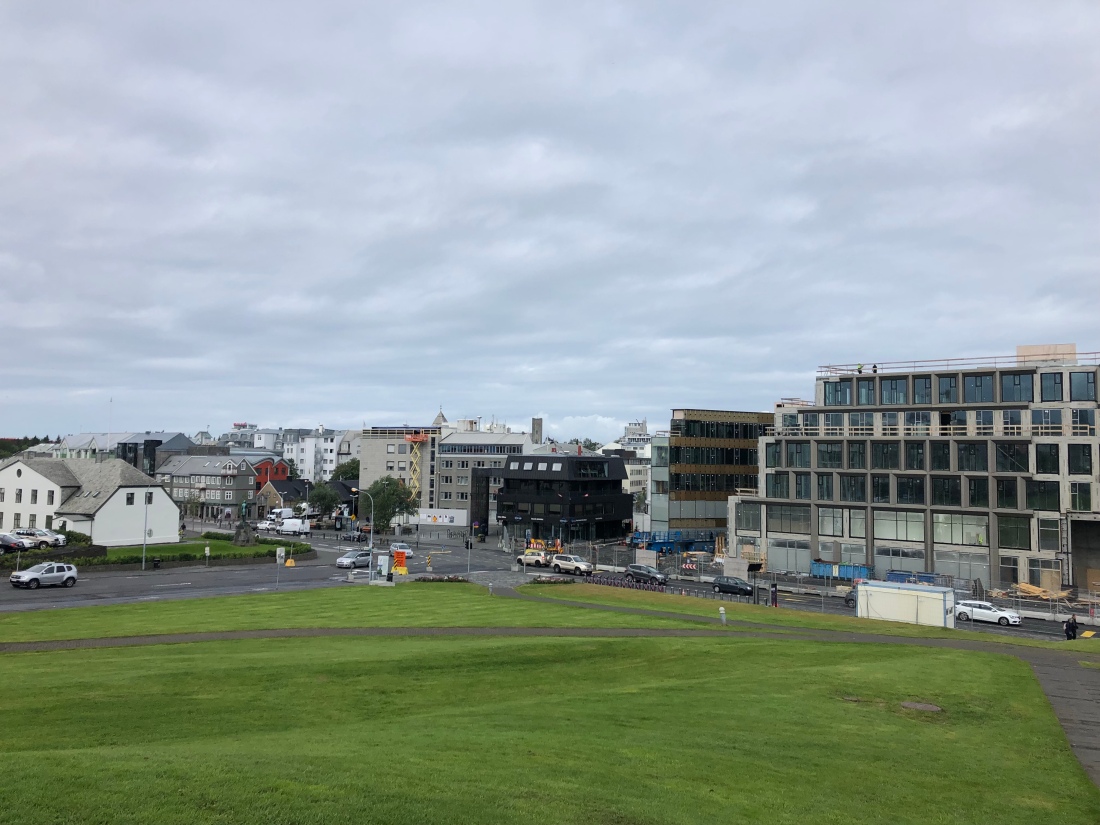 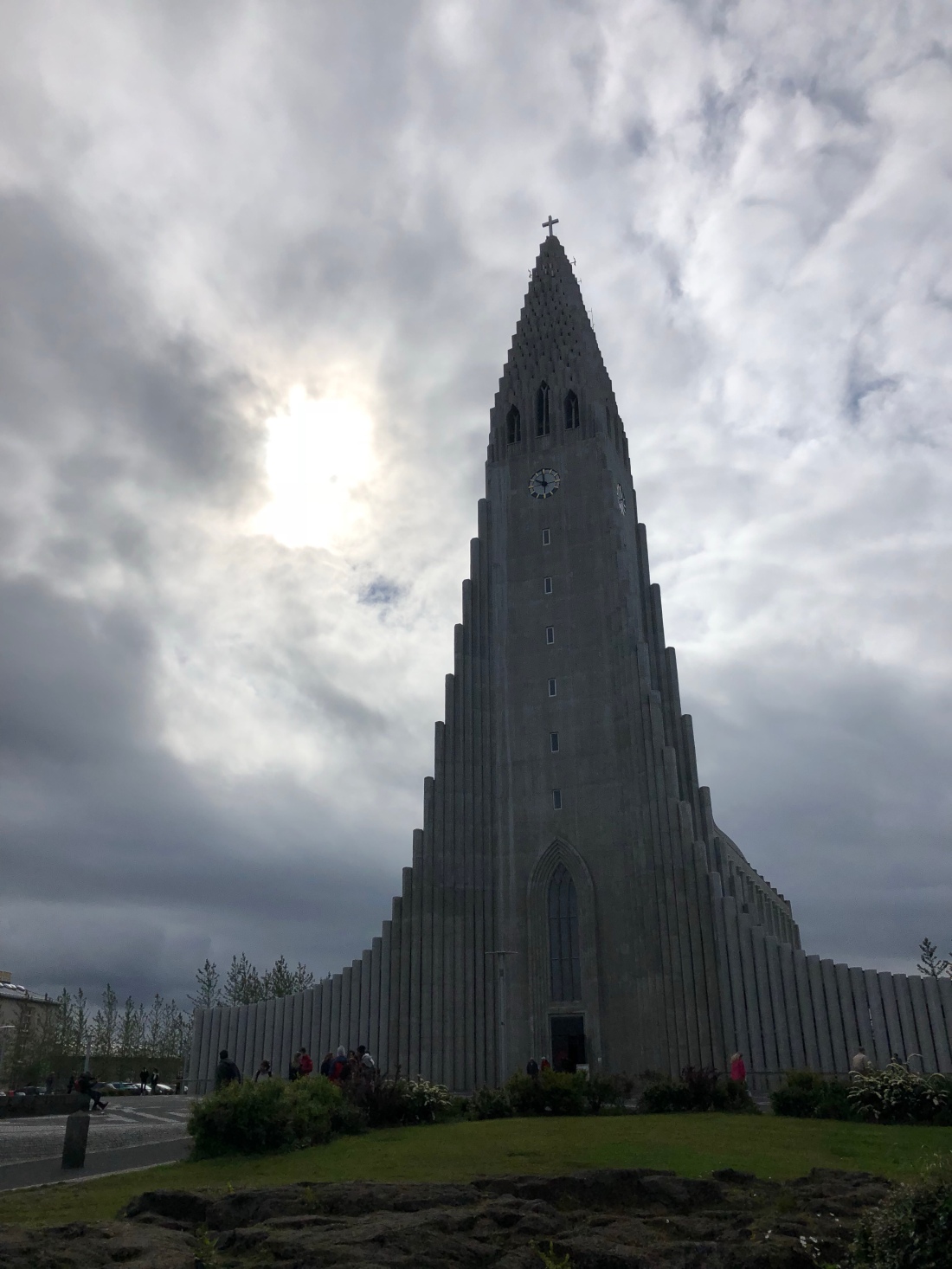 I stopped off via the supermarket to pick up the milk, bread and ham that we needed, and it just started to rain as I left the store, so I half ran back with my bag of groceries tucked under my arm.

Cornelia and Ian were busy with the Lego again when I got back, although she had definitely been waiting for me because “Can I have my porridge now?!” were the first words she uttered to me!

After a brief argument about when she should shower (she relented and had a shower with me), the happy vibe was restored. Ian made porridge – Cornelia was hilarious:

Ian: What would you like in your porridge? Jam or brown sugar?

Me: So, brown sugar then?

Cornelia: No, that doesn’t really make it go brown.

Me:(knowing what she wants) What would make porridge go brown then?

Cornelia: (pretending to think about it) Oh, maybe chocolate spread. Do you think that would work?!

Me: It would work, but no. You’ve had two pieces of toast with chocolate spread already today. That’s enough.

Bugsy ate all of her second breakfast, whilst Ian and I packed all the bags up, and tidied up the flat. We all walked down to the seafront together (it was only about 500 meters away from the apartment) and this time wakes the opposite way from downtown. We came across a long worm, wriggling his way over the path, which was a source of great excitement to the toddler, then discovered a peculiar sculpture park, including a house made from recycled products. It was all a bit odd, but probably quite interesting if you’re into that sort of thing! (I quickly realised I am NOT!) 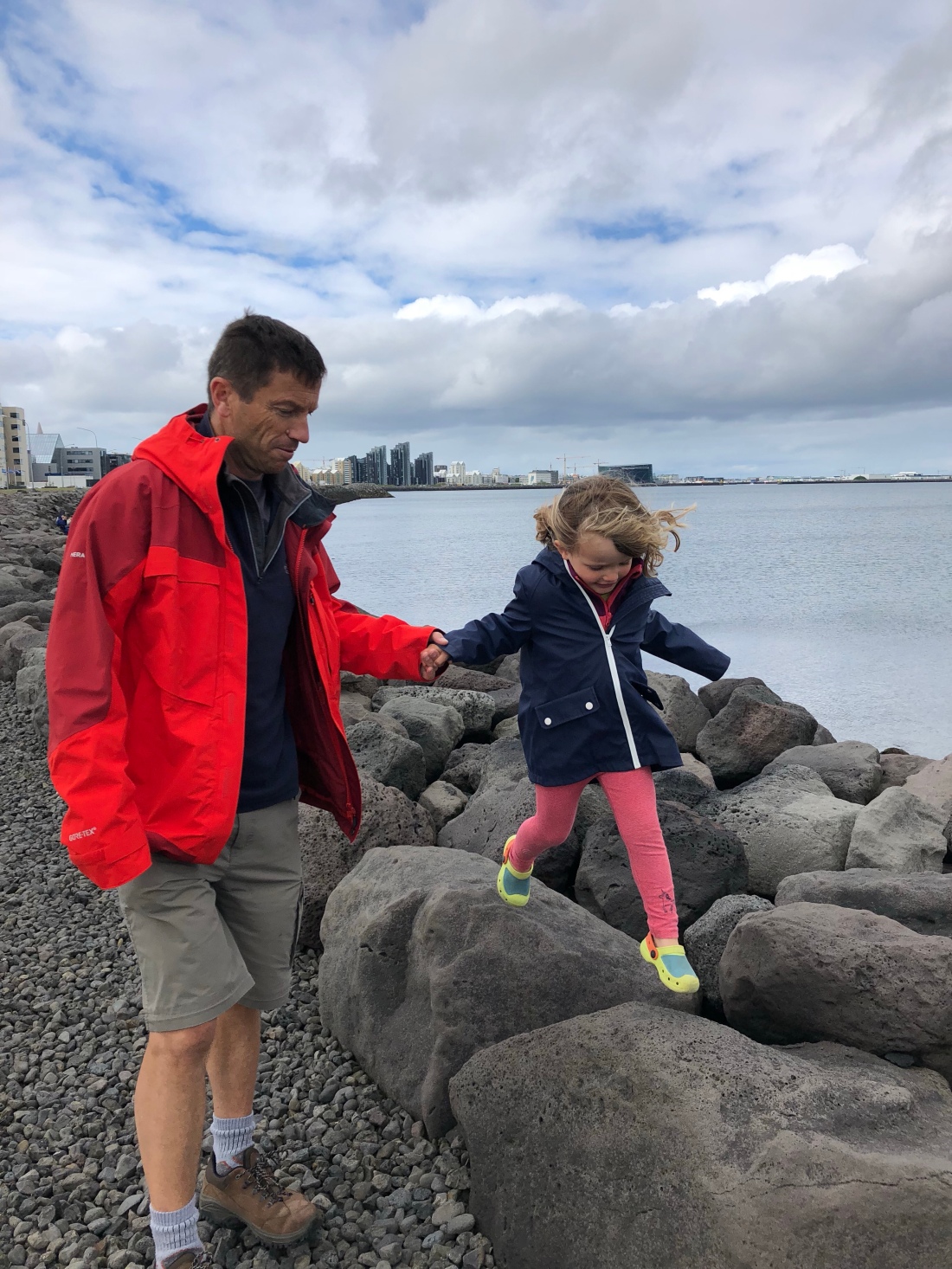 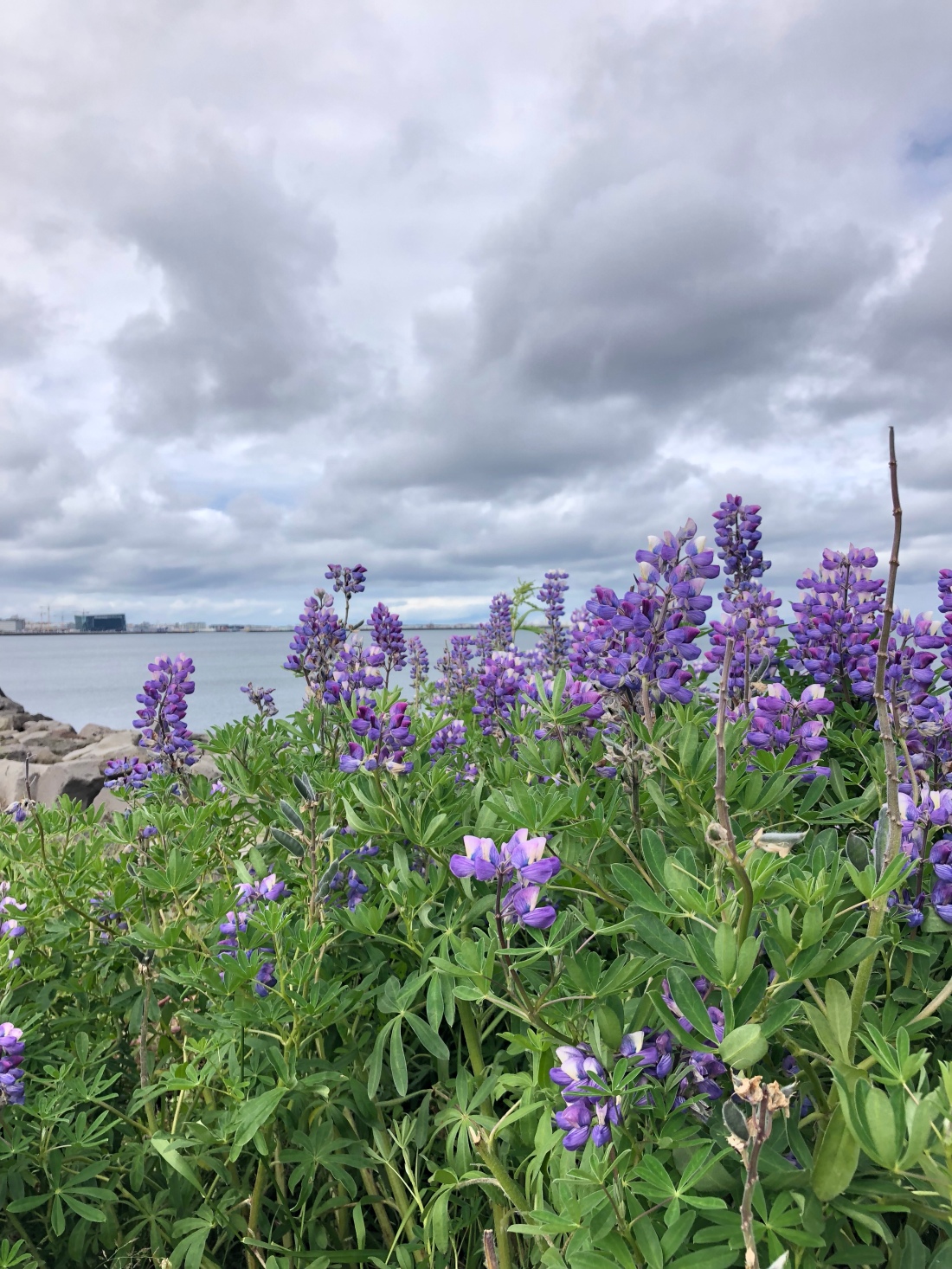 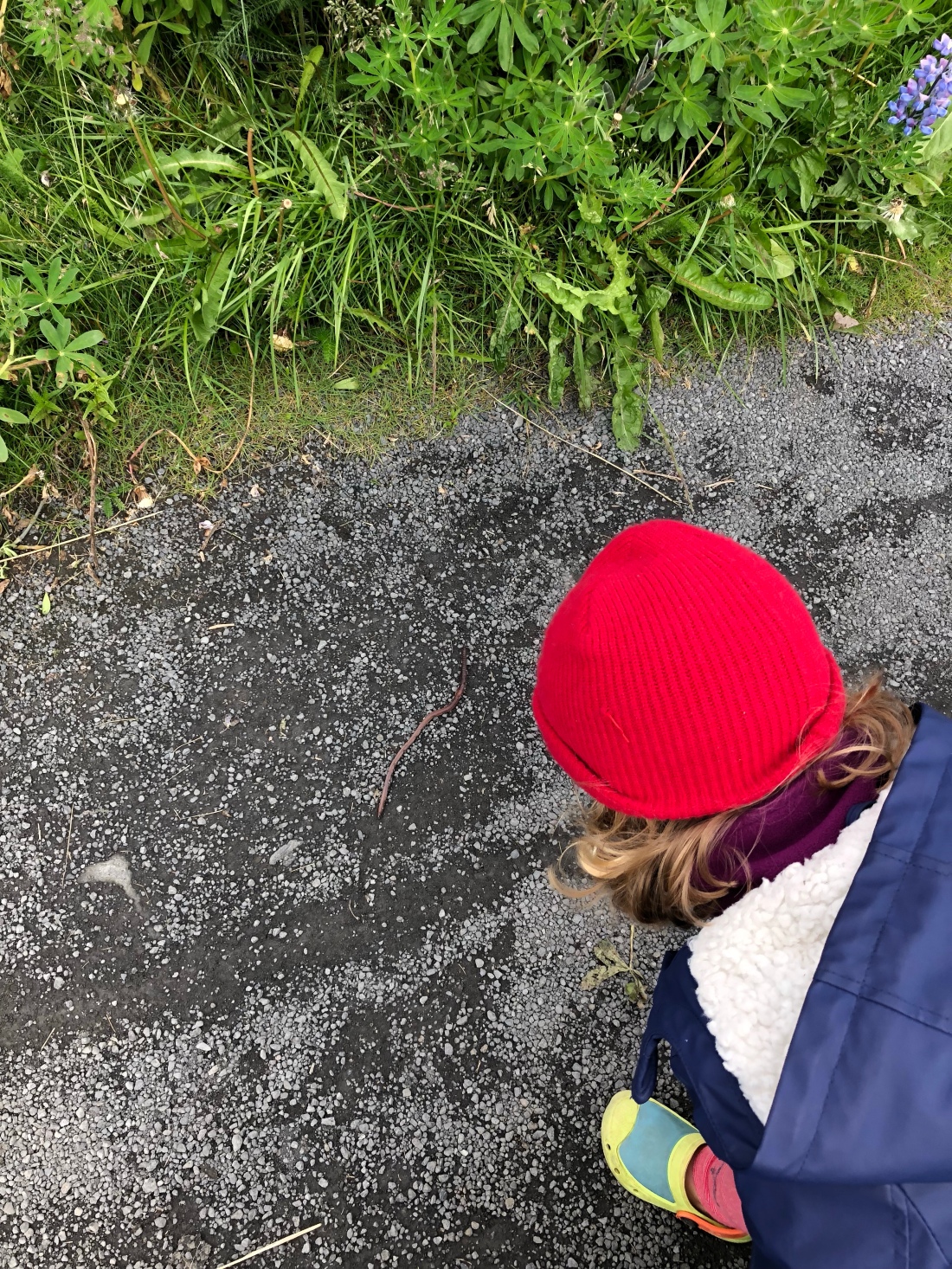 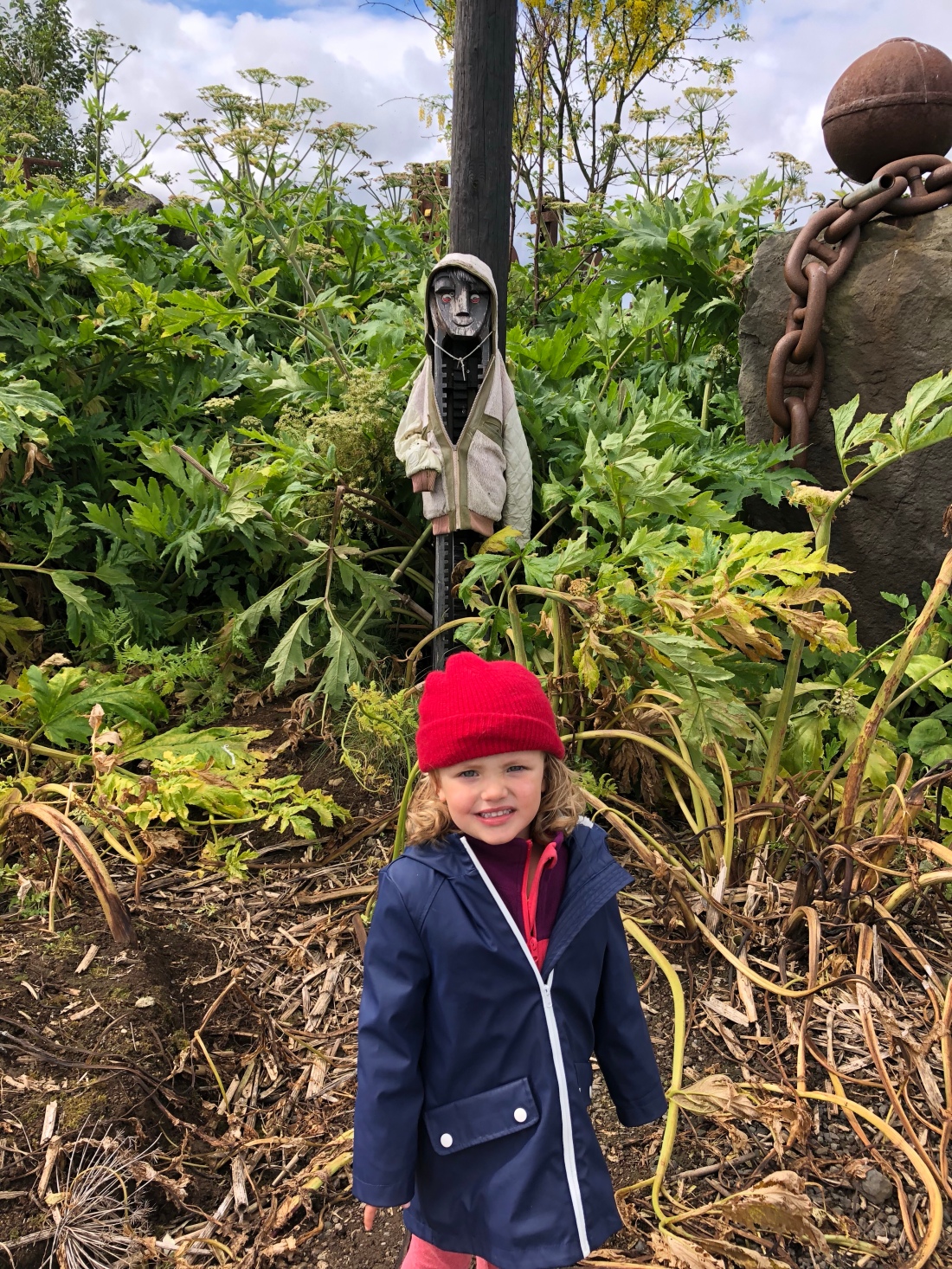 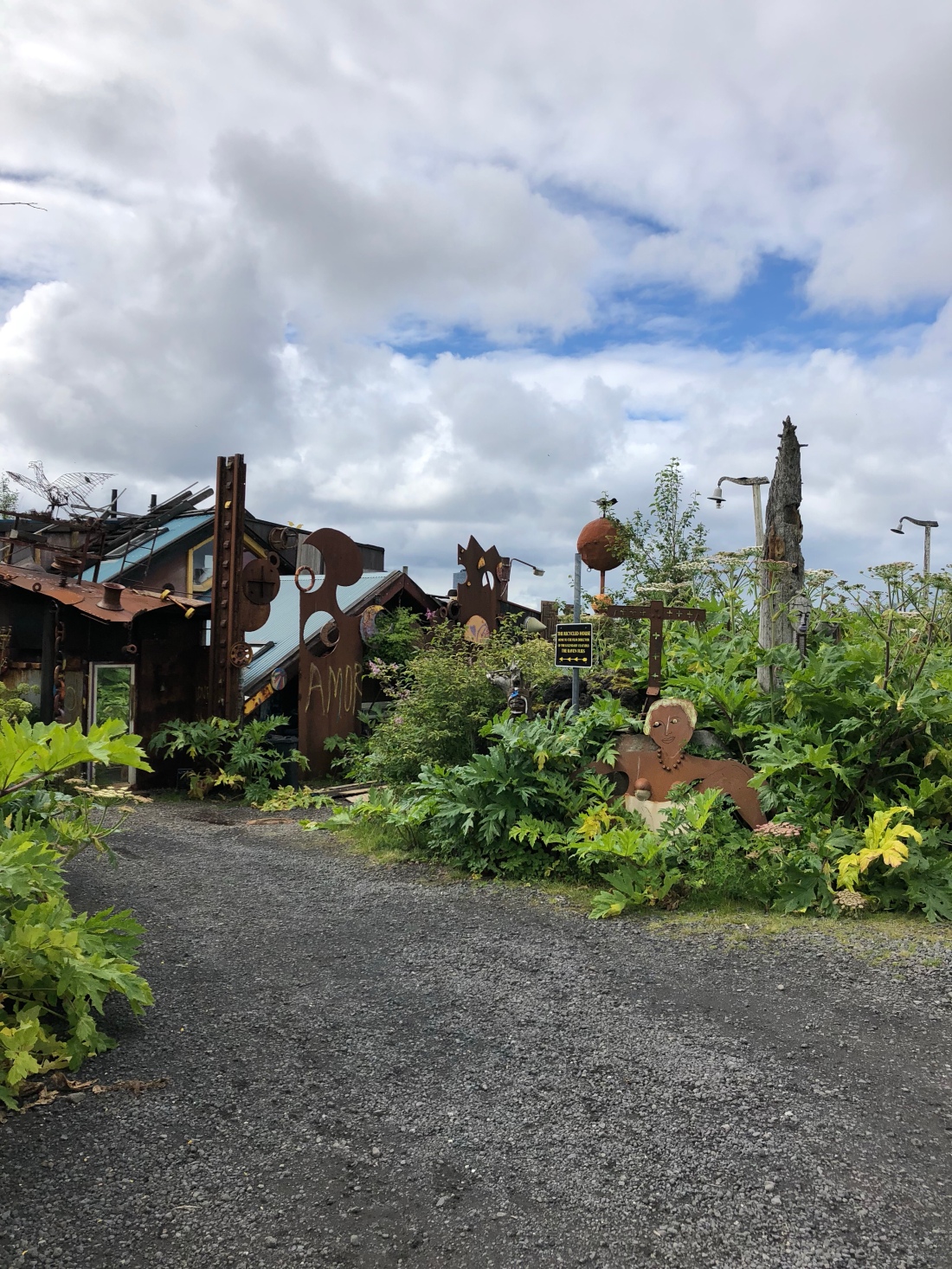 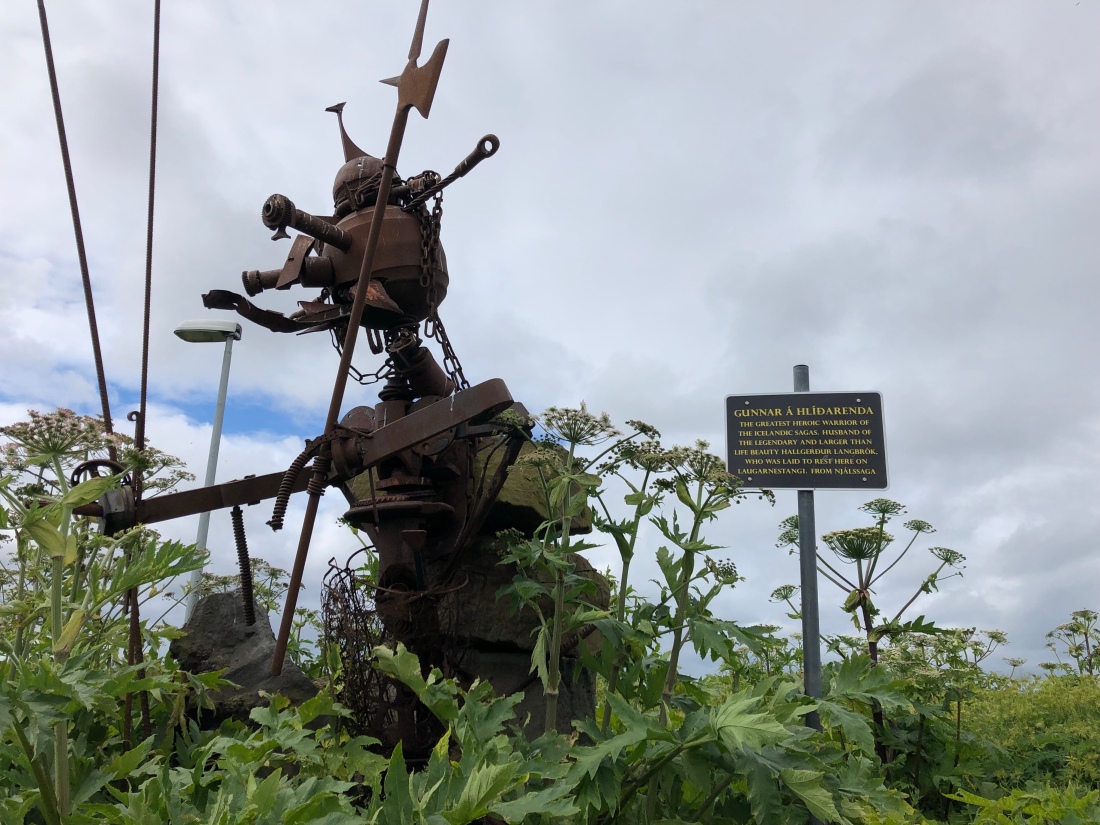 We returned to the flat for a sandwich lunch, and to finish packing the car, and headed off to the airport. Drop off was quick and easy and we even had a shuttle bus to take us the short distance to Departures, where we managed to get a trolley straightaway. So far, so good! 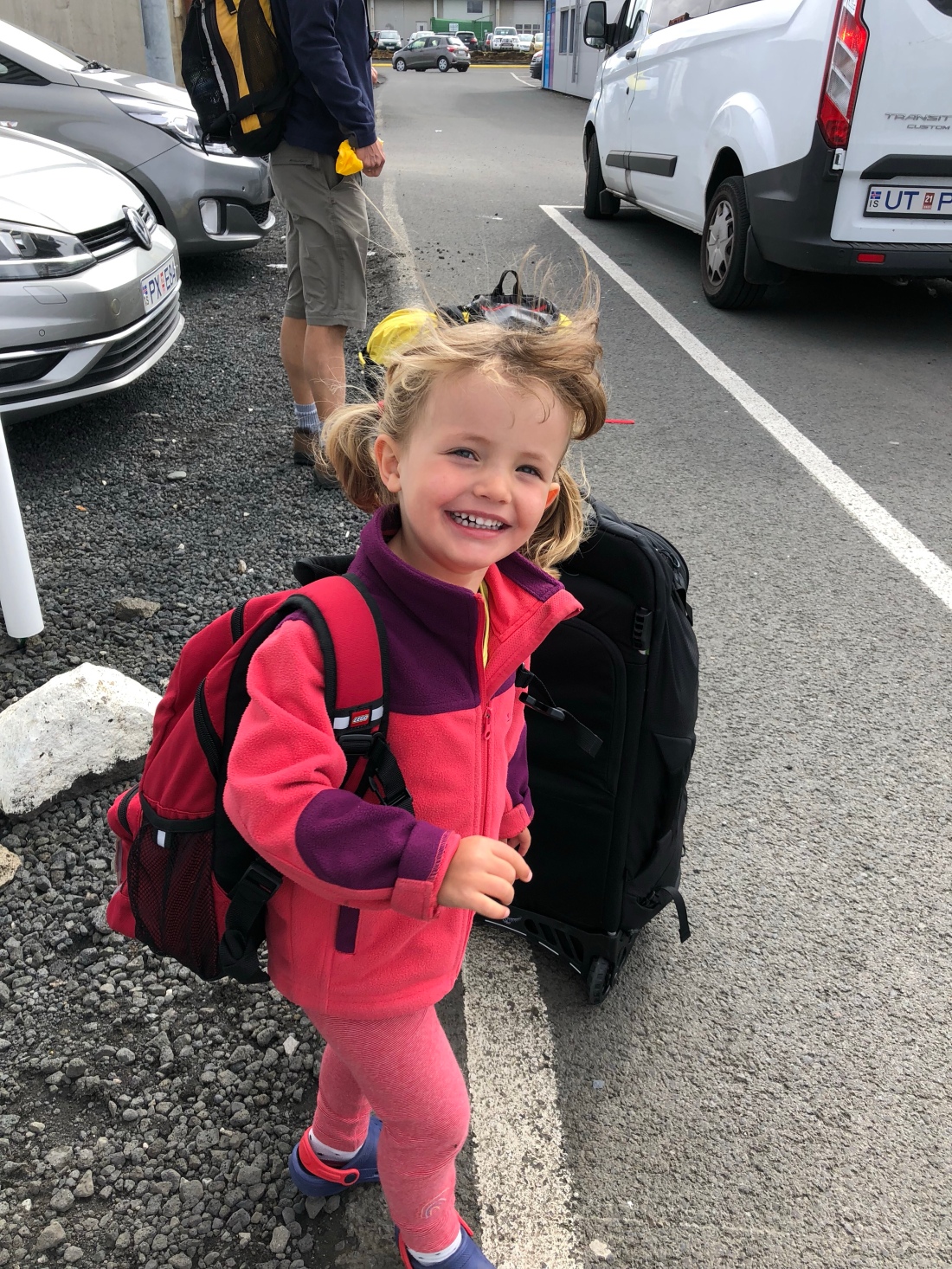 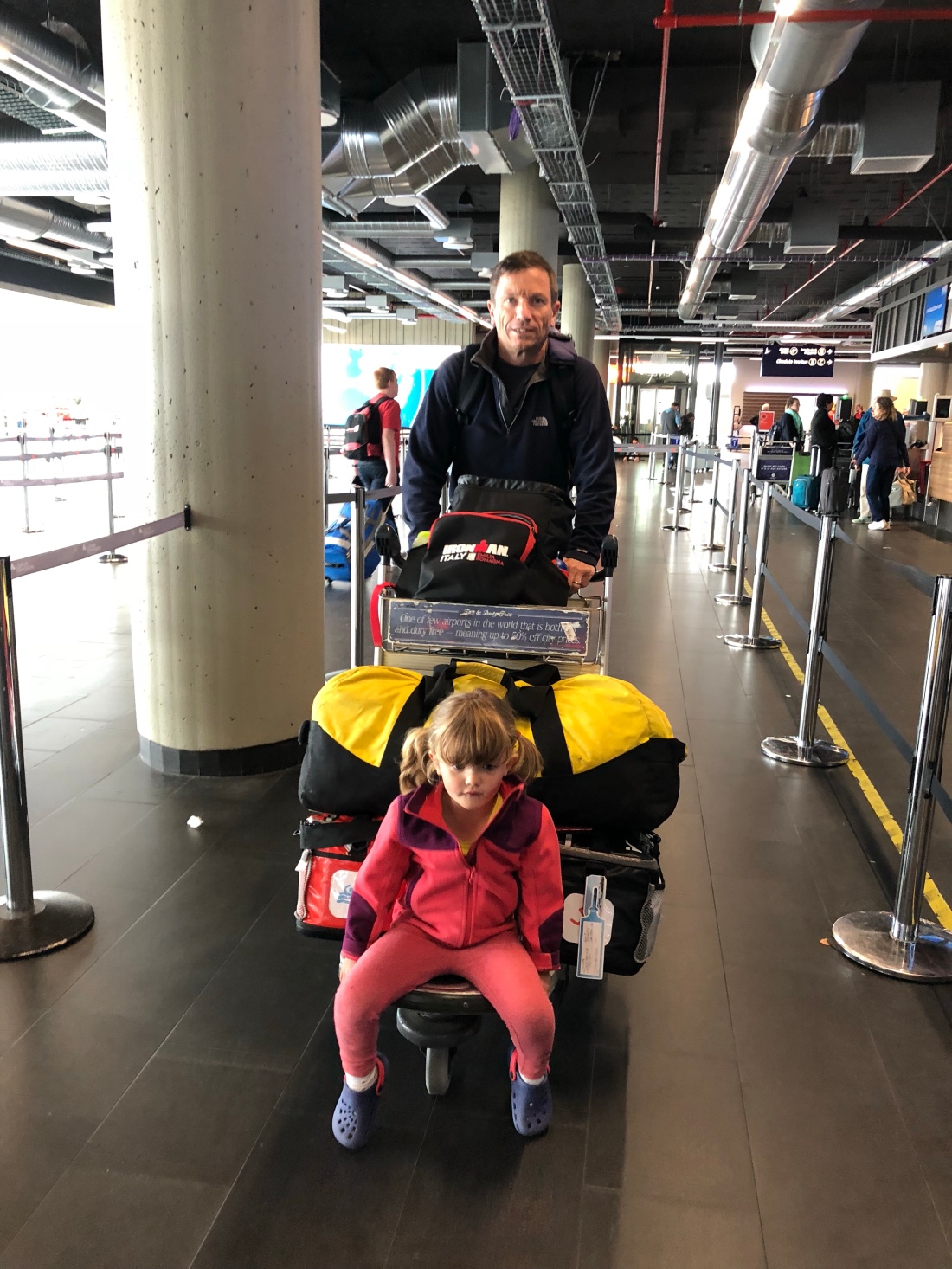 There was only a short queue for check in, and Cornelia was still on good form, smiling and chatting to all the desk staff. You never know when her charm may serve us well!! It was the same at security – just a short wait, before we all cruised through. The gates in “D Zone” were quite a walk, so we decided to head straight there after a short play in the kids’ area (which was a little disappointing- just a patch of fake grass with some pointless mounds on it, and a giant tablet with computer games on. It was a bit odd. Thankfully, Cornelia didn’t want to stay there anyway, and was easily convinced away for the walk!)

The queue for our gate 28 was a bit haphazard. No real line had formed and it was unclear how and where we should stand. Thankfully, an American couple overheard our conversation and told us that we could skip the line as we had a child. Hurrah! We ended up chatting to them quite a lot, and they were very friendly. They’d just been on a two week cruise around the Fjords in Norway and loved travelling, so were very excited to hear about our adventures. They were, incredibly, in their mid seventies, but only looked as if they were in their sixties. Pretty good going!

The only wait we had was on the plane – we were on the first bus from the terminal to the plane and it was probably another hour before we started to taxi down the runway, about 40 minutes behind schedule, when is always slightly irritating, but even more so when you have a nine hour flight ahead of you! Unfortunately, our seats were in the middle of the plane, right next to the loos – one either side of us. On the plus side, it meant that we never needed to queue!

No meal was served on the flight, although Cornelia was given a cheese pastry that I insisted she eat, before she had any other snacks. I’d brought a couple of bananas and yoghurts for her, thank goodness, and Ian and I snacked on peanut bars and biscuits. She was getting tired and wanted to be fully naked to sleep, so I stripped her off and covered her with a blanket, but the draw of a second viewing of The Lion King in three days was too much and she curled up half in my lap, snuggled up, fixated by the film.

In the meantime, I was half-twisted at the edge of my seat, unable to watch anything, as I’d given the spare headphones to Ian, who was listening to music whilst doing the crossword… Eventually, Bugsy pulled her eye mask over her eyes and fell asleep almost immediately.  It was all perfect timing, actually, as she slept for about three and half hours, until it was time to land, then after a short cry of disagreement, she was persuaded to put on her clothes and cuddle up until we were on the ground.  She was tired, but not desperately so.  I was feeling fine, despite not shutting my eyes even for a minute, although we were all keen to get to our final destination! 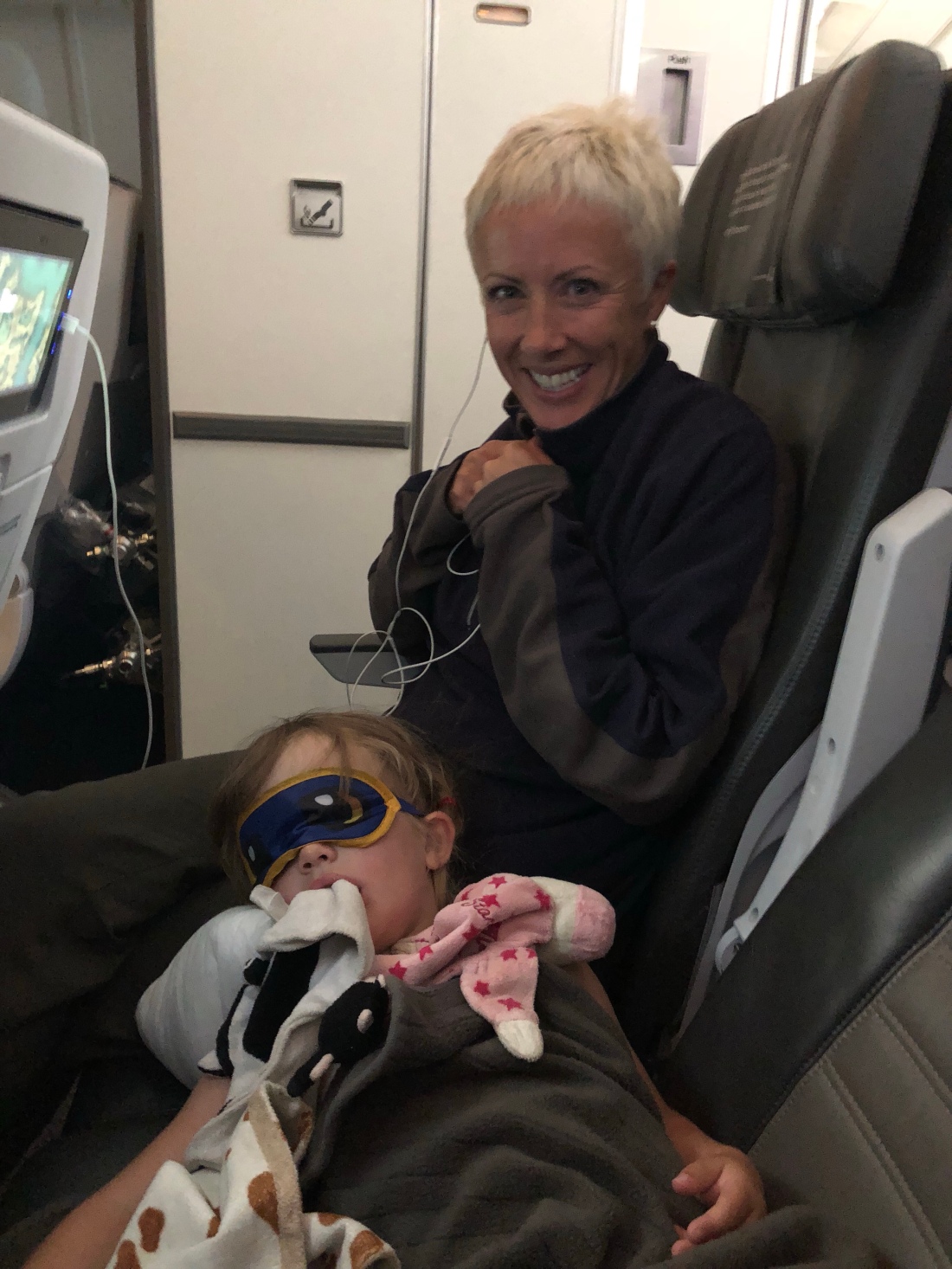 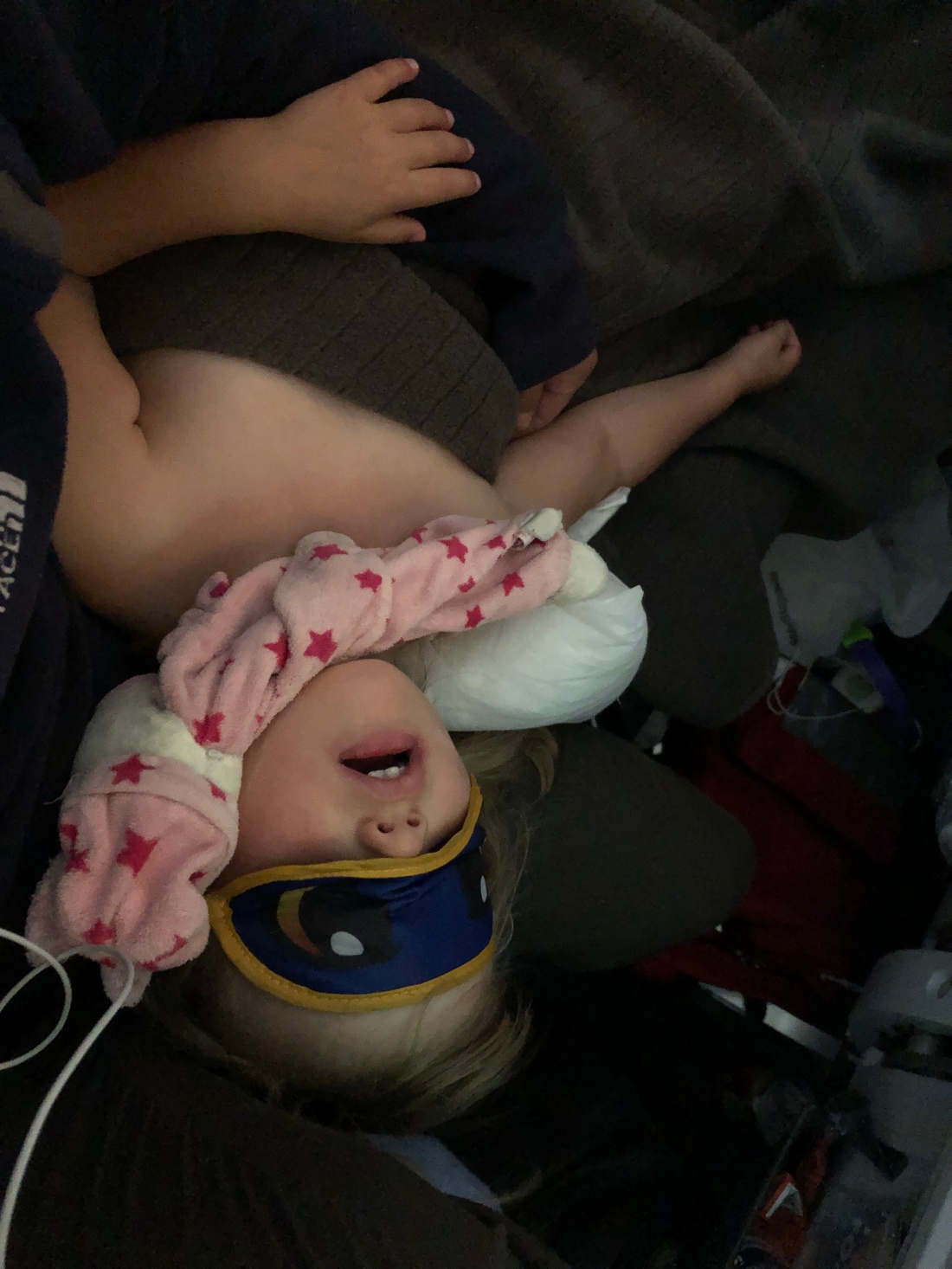 We disembarked swiftly and all traipsed through the airport and passport control/immigration. We were finger printed and asked the usual questions (Where are you going? How long are you going to be here? etc.) All the questions that are simple enough to answer but you somehow feel guilty about something or that you are going to be caught out!

With no holes or gaps in our stories, we were stamped and admitted, and set off in search of our bags. All of them had made it through with no damage or loss – always a relief – and we trundled off to catch the shuttle bus to our hotel. We weren’t sure if you had to ring the hotel to book a pick up, or whether it was just a circular route that the bus took, but I took no chances and rang the hotel using the phone at the bus stop. We were indeed meant to call them, and within five minutes, our friendly chauffeur was there to transport us the 30 minutes to the Super 8 Hotel in nearby San Bruno. 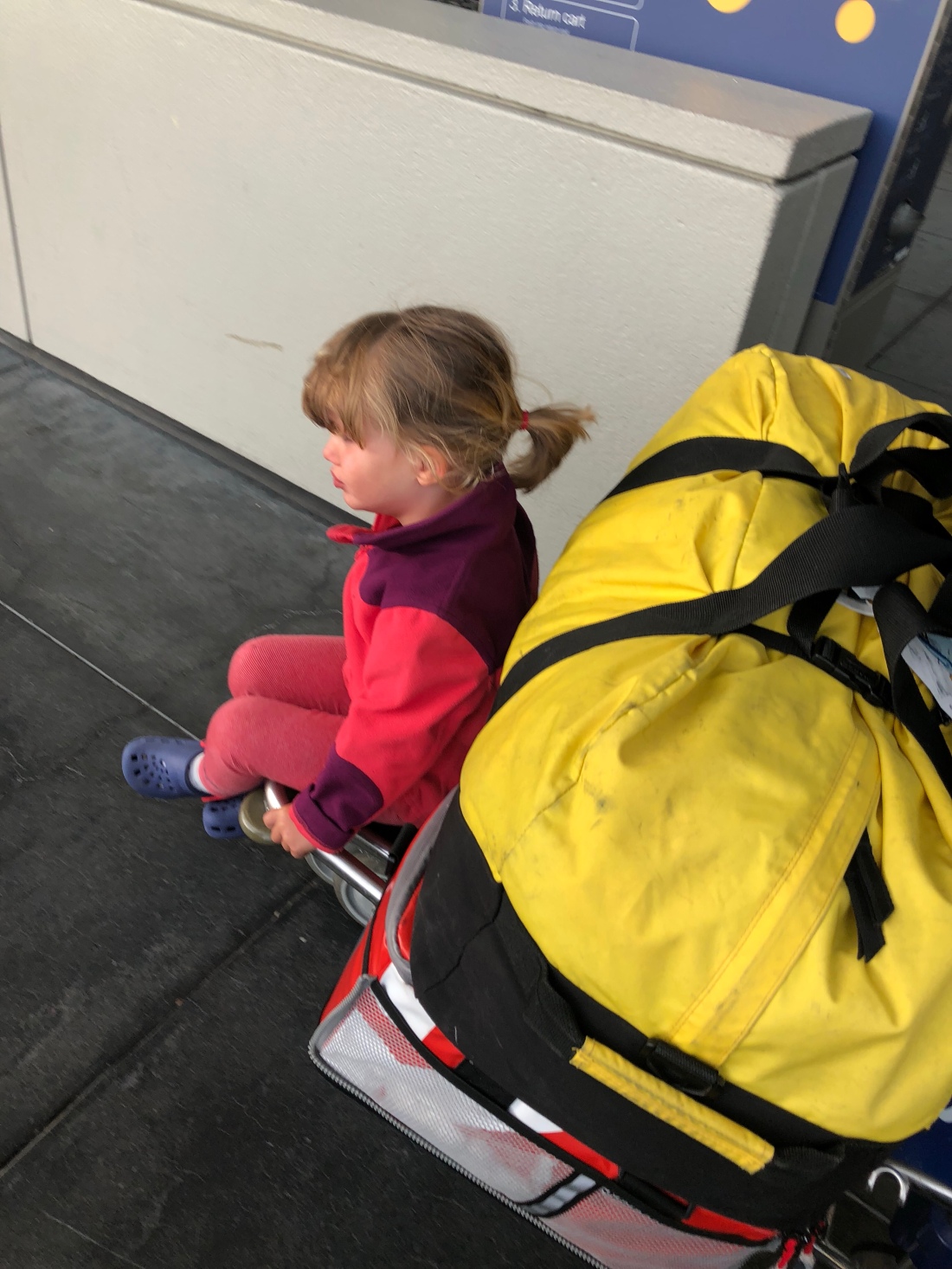 We checked straight in and Bugsy was thrilled to discover she had a whole double bed to herself… and then she said “Now, Mummy, you can sleep in with me tonight instead of Daddy!!!” 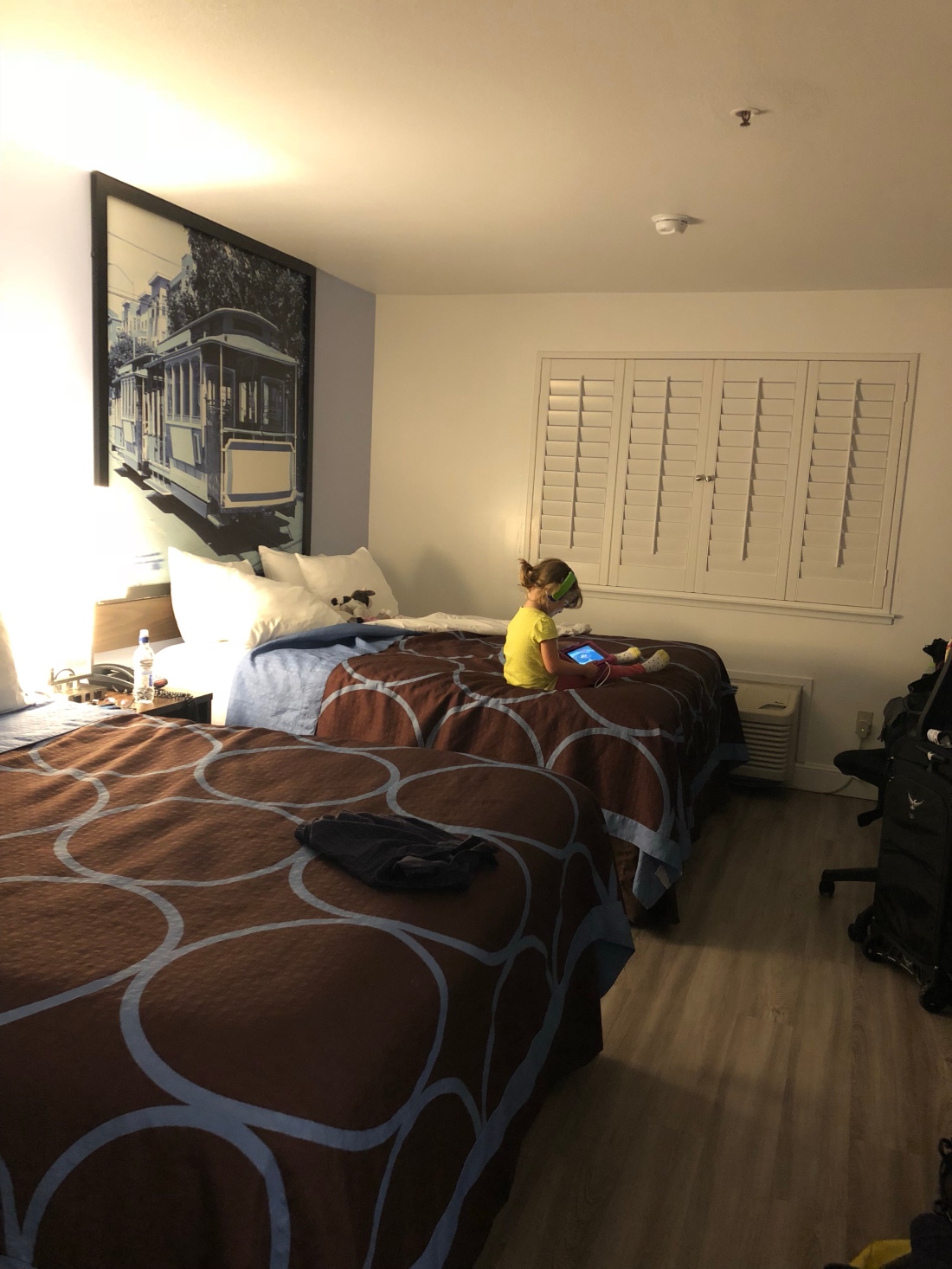 All of us were flagging now, but we needed something to eat for supper. (We had taken off at 17:30, flown for nine hours, and arrived at 18:55, which felt most strange!!) Good old Trip Advisor recommended an Italian restaurant just around the corner, which we dutifully attended and gorged on bread and pastas.

We were the last ones in the restaurant and I am sure they were glad to wish us a good night as we wearily trudged back to the hotel and clambered into bed, desperately hoping that we would all sleep through until morning!