What a day!  I am still glowing from the joy of it all!  It all started with cuddles in bed with a snuggly toddler.

Ian had explained how today the sun wouldn’t set here, by using a ball and a gold coin to demonstrate the rotation of the earth.  She then showed me and did a pretty good job of it, despite not being able to spin the ball around quite so easily as Daddy!  After a quick breakfast, we set off for a brief walk down the river before stopping at “Mumin Kaffe”, a cafe dedicated to, yes, the Moomins, that was absolutely fabulous!  Bugsy had a hot chocolate in a Moomin mug, and the whole place was decked out with Moomin “stuff”, including a little play area, where Ian read one of the Moomin books to her.  She was utterly enthralled by it, and we spent some time reading about each character online.  She fell in love with “Little My” and as a special gift, we bought her an enamel “Little My” mug. 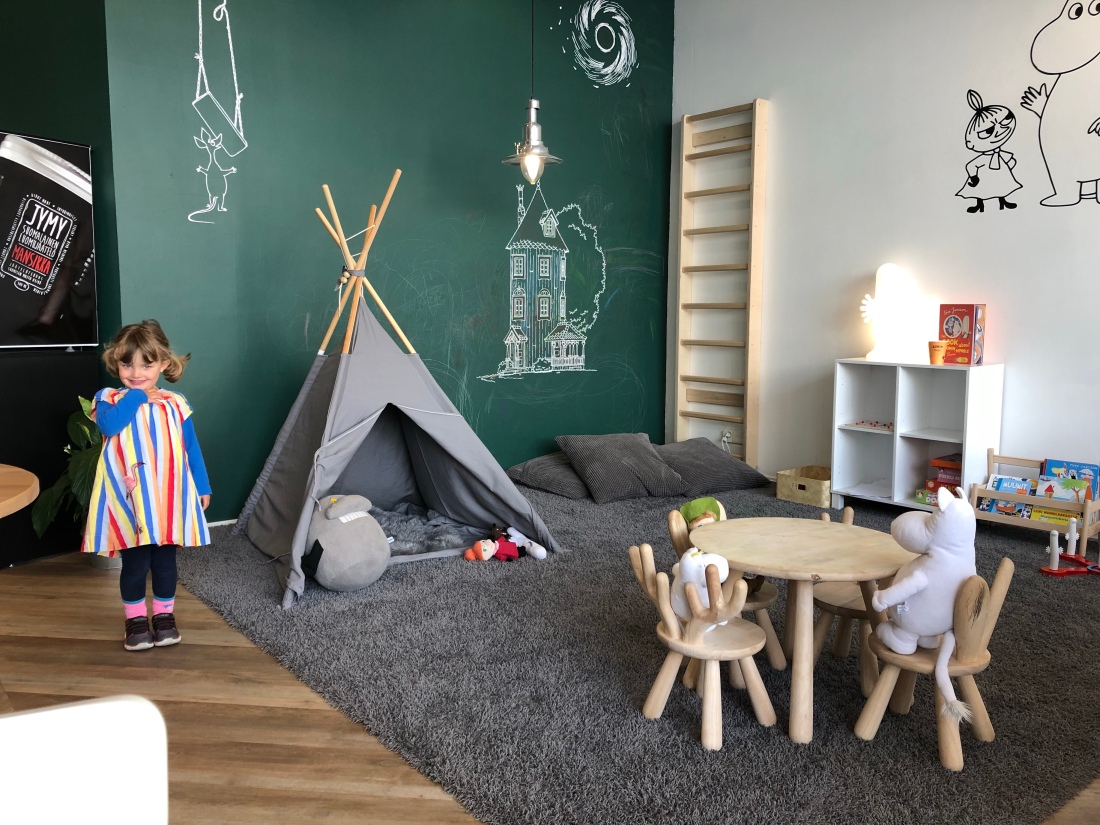 Rovaniemi is full of reindeer statues and sculptures, and is festive with Christmas trees all year around, so there was plenty for us to look at, as we headed off on our bikes to Santa Claus Village, in the Arctic Circle. 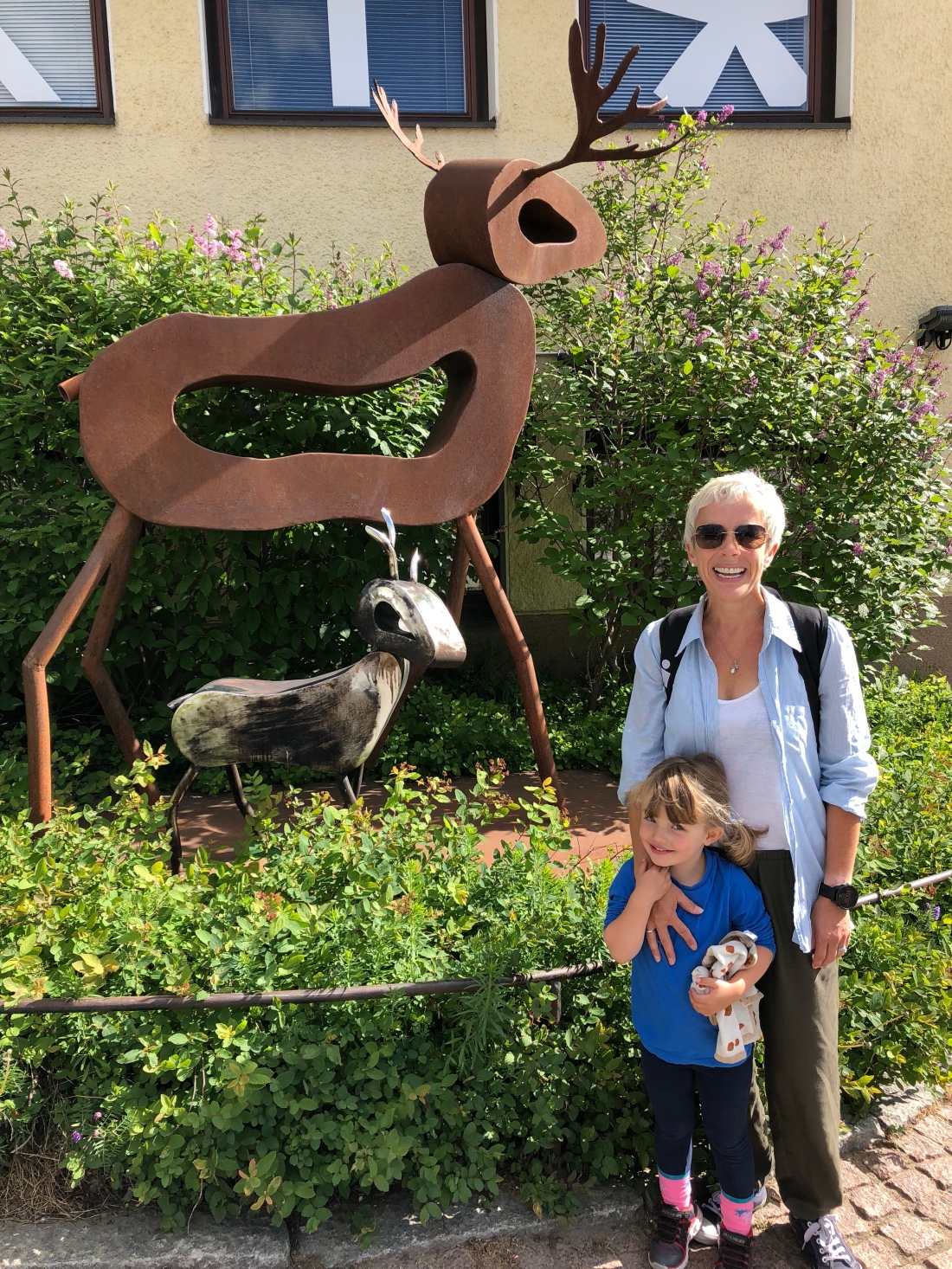 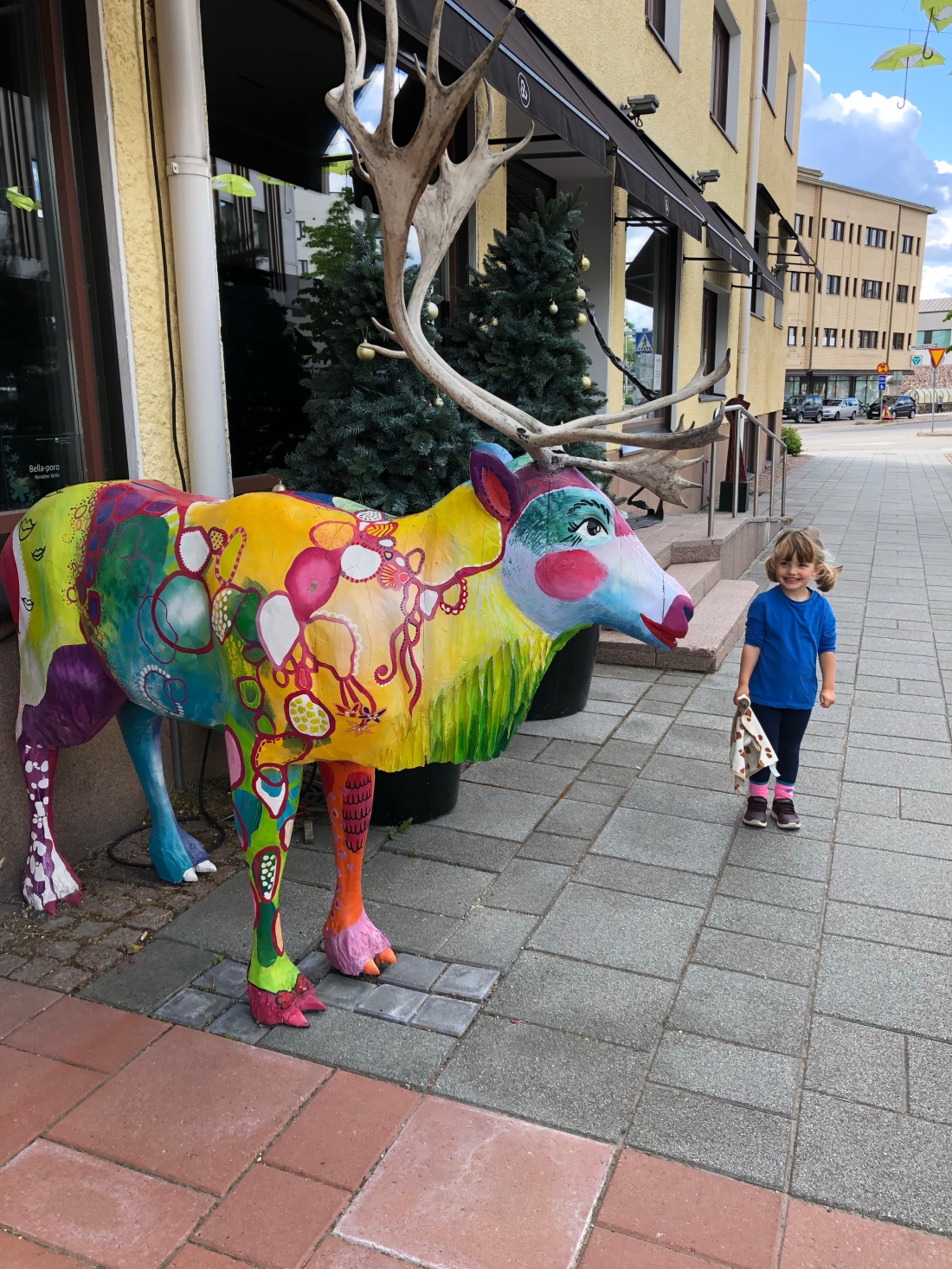 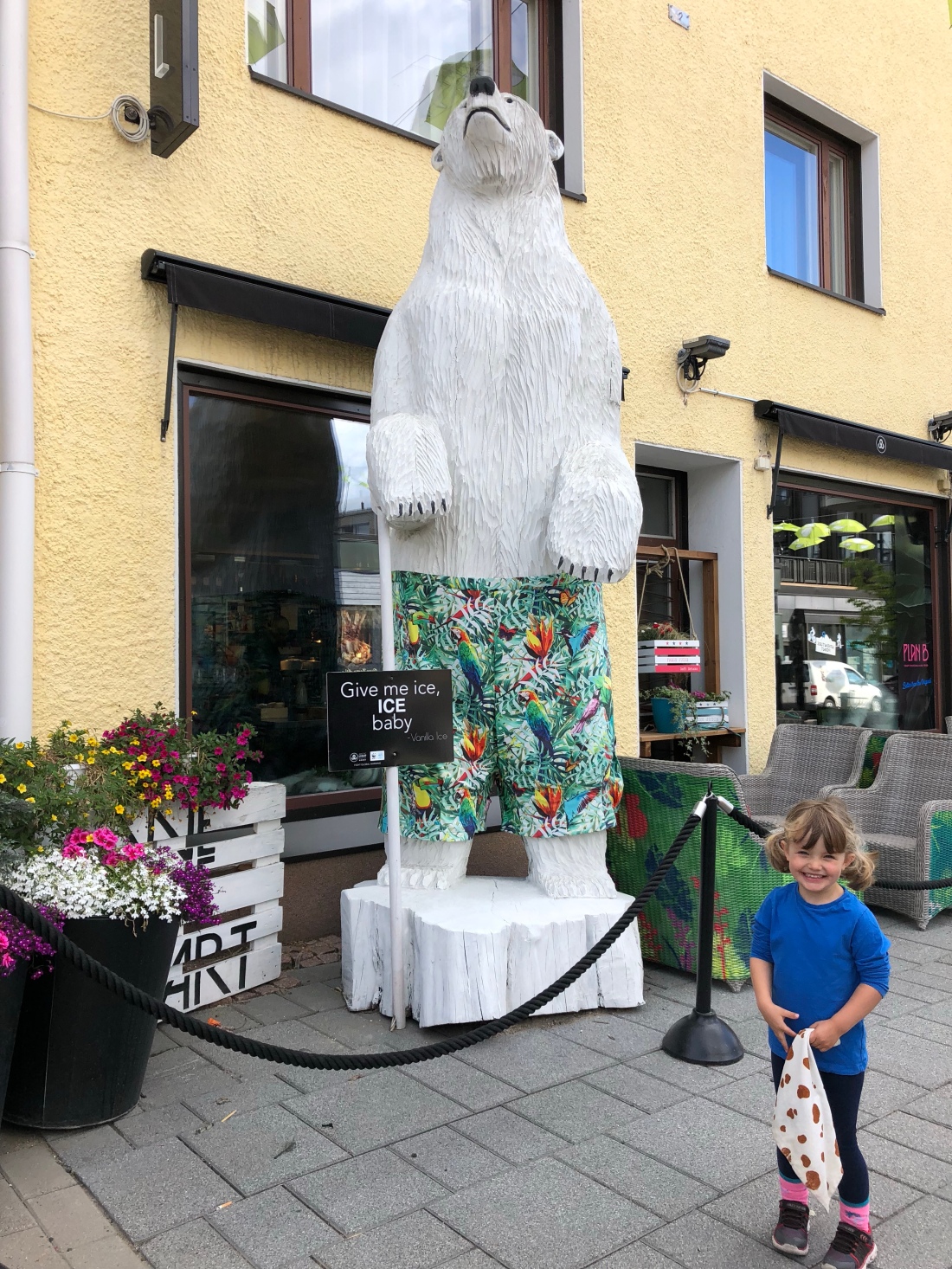 It was an exciting five mile cycle to the Village, which itself looks unremarkable from the outside.  We posed for photos on the line of Arctic Circle, of course, before going in search of the real Santa Claus. 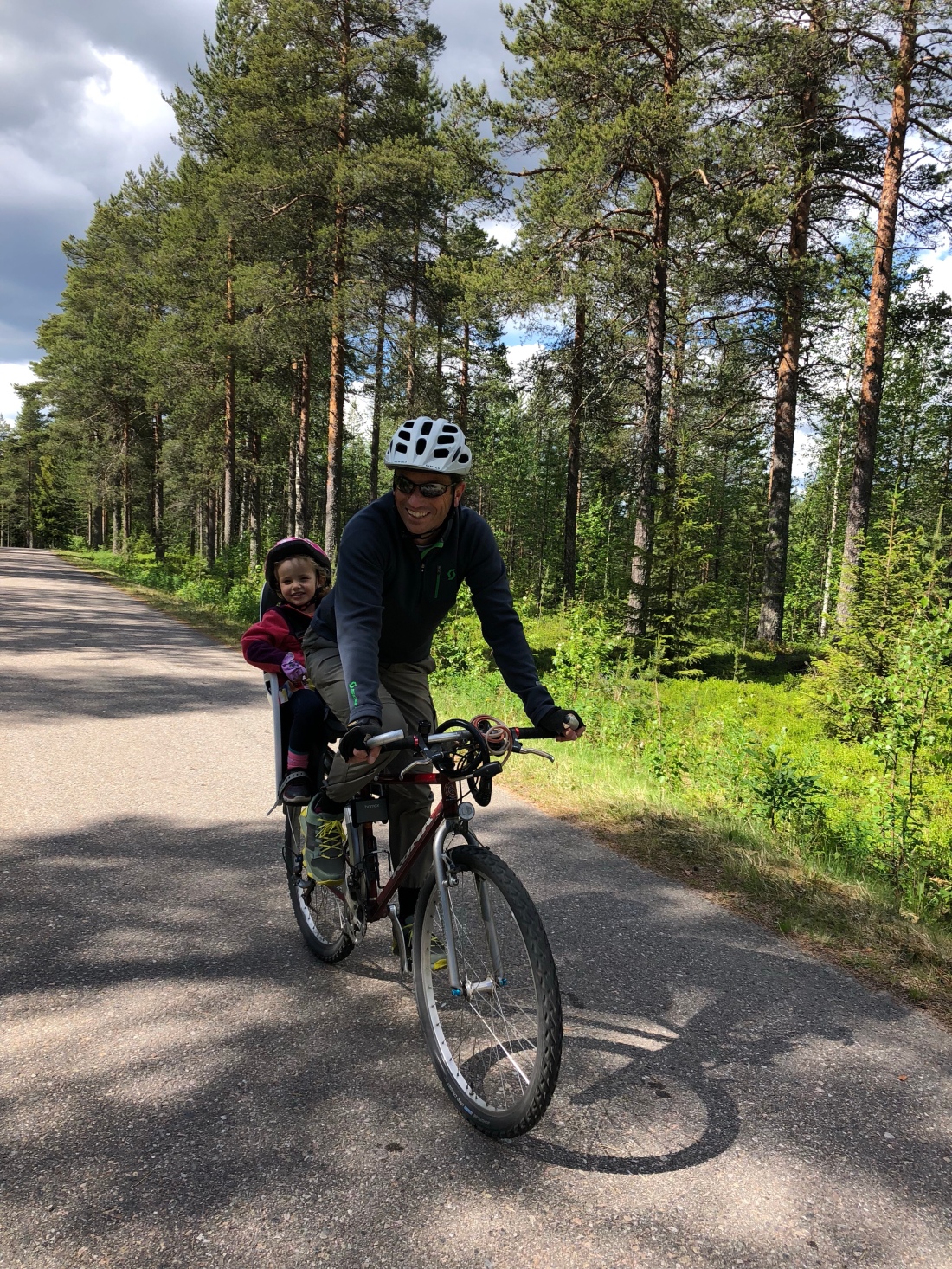 Cornelia was really looking forward to seeing him, but was also a little bit nervous, and asked look around the shop first.  Naturally, I was delighted to have an excuse to look around the store, and I was not disappointed.  There was so much terrific merchandise, that I am surprised that I managed to limit myself so thoughtfully!  Truth be told, I knew I had to carry it all back in my rucksack, and having experienced the frustration of too much shopping the other day at the supermarket, was wise enough this time to know when to stop!  That didn’t prevent me from having a thoroughly good session in there though!!

After we’d paid, it was time to visit Santa.  In fact, it was exactly the Summer Solstice when we saw him (13:07 here).  We walked slowly through the passage leading to his Grotto, reading all about different Christmas traditions around the world.  And then we heard his “Ho ho ho!” as he spoke to the people who had arrived before us.  Cornelia was apprehensively excited, but forgot her nerves as he beckoned her towards him.  She ran up and started chatting to him straightaway, and giving him a letter and a present that she had written to him in the morning.  (It said “Dear Santa, I hope that you get everything you wish for.  Love Cornelia age 3.”  All her own words, and spell-checked by Mummy! She had also wrapped up a biscuit for him, and seven chocolate raisins for his reindeer.)

He was generous with his time, and Cornelia told him about our world adventure and asked after his reindeer.  Carrots are their favourite food, in case you were wondering.  Then we had our photo taken and we already knew that we would have to pay for it, but to be honest, it all seemed completely worth it, for this once in a lifetime experience.  (I say “once in a lifetime”, but she’s already asked if she can come back when it’s snowing, and I’m not totally against that idea…!)

Photos and Santa Certificate purchased, we visited the Three Elves restaurant for our lunch.  Ian was keen to try a reindeer burger, and I had the meatballs, and Bugsy opted for sausages and mash.  It was all delicious! 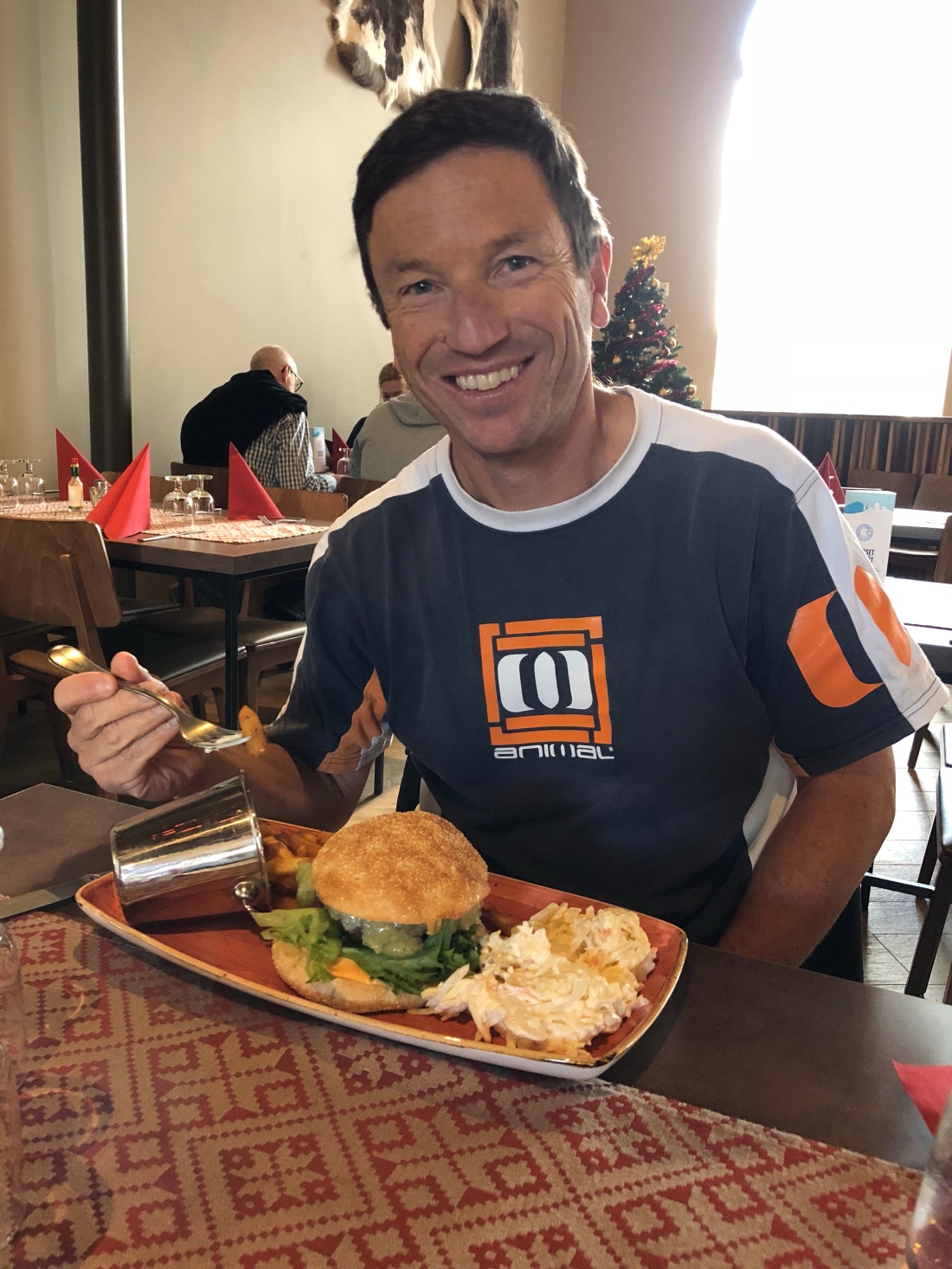 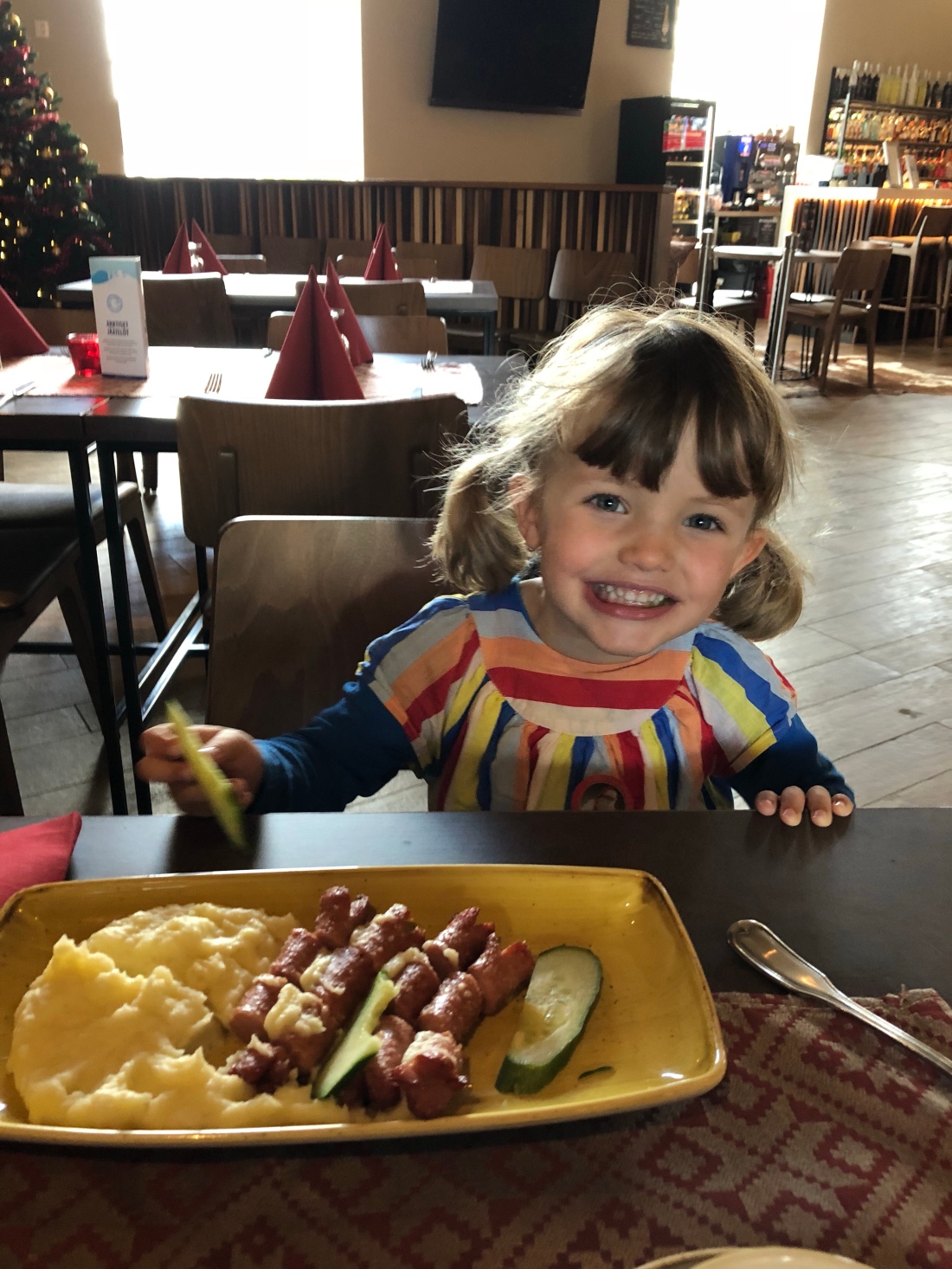 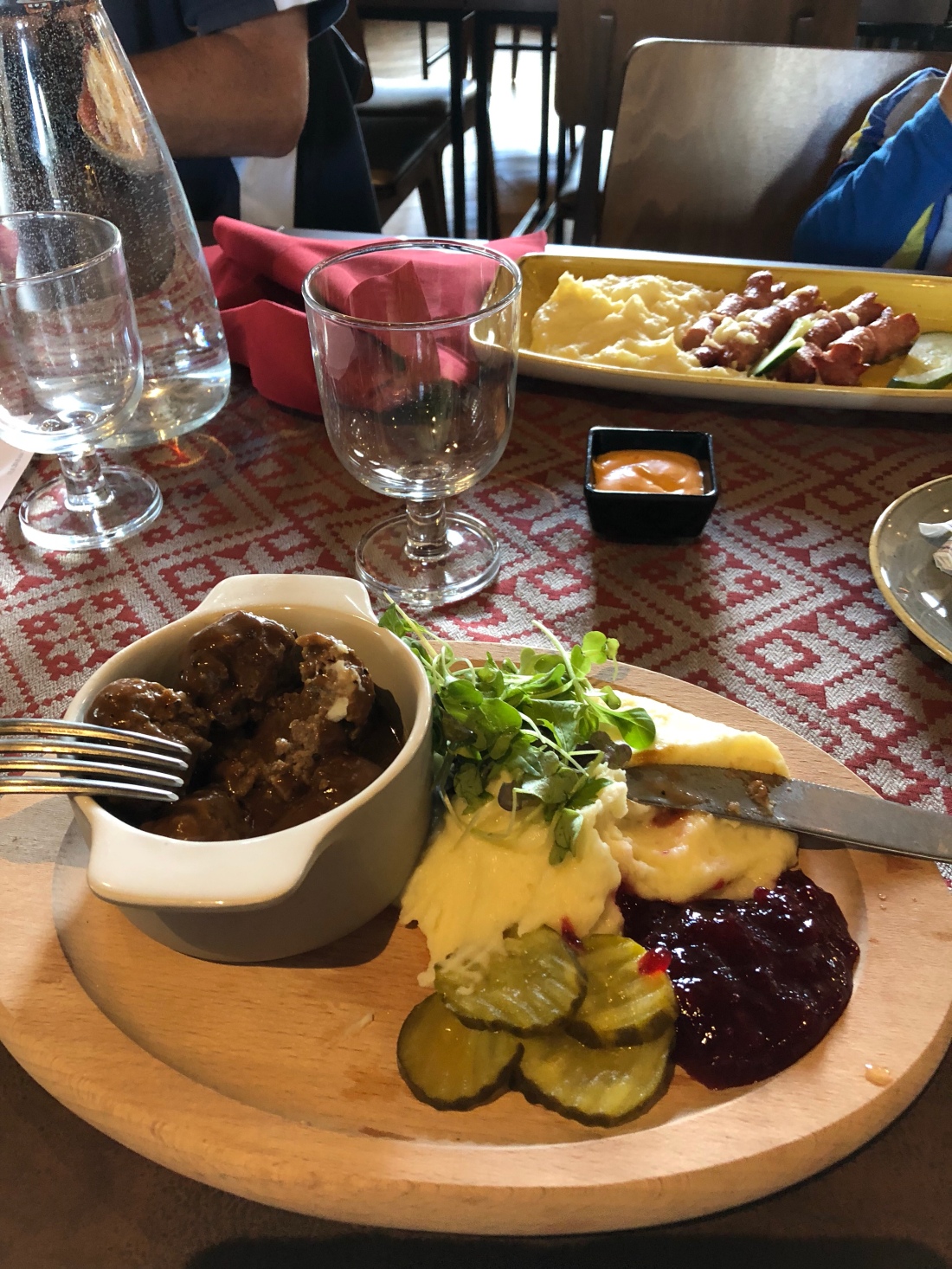 They also make “Arctic Circle” ice cream nearby and again, as this this all a one-off, she was treated to a sundae dish full of chocolate icecream, chocolate sauce, blueberries and cream.  Luckily for us, she didn’t want her blueberries or her cream, so we scoffed those, before she managed to knock the dish off the table and smash it all over the floor.  She promptly burst into tears, partly due to the loss of her ice cream, and partly because she was mortified by her actions.  The staff there were brilliant, reassuring her that everything was fine, before bringing her a new portion, this time on a plate and making a smiley face with two scoops of ice cream as eyes, a pool of strawberry sauce as the nose and a smile of chocolate sauce.  It even had some green leaves for eyebrows!  This cheered her up immediately and she happily tucked in, although she did say that if they’d just brought her her ice cream on some bubble wrap in the first place, none of this would’ve happened…  Oh, the mind of a three year old!!

We paid up and after taking a few more photos with Christmas trees as the backdrop, cycled home, via a play park where she had the whole place to herself again.  We had been warned about the millions of mosquitoes in Finland, but so far (touch wood) we have been incredibly fortunate to have avoided being bitten by any of them.  We have only seen a few here and there, especially in Rovaniemi.  Typical, now I am armed with all sorts of mosquito repellents and treatments! 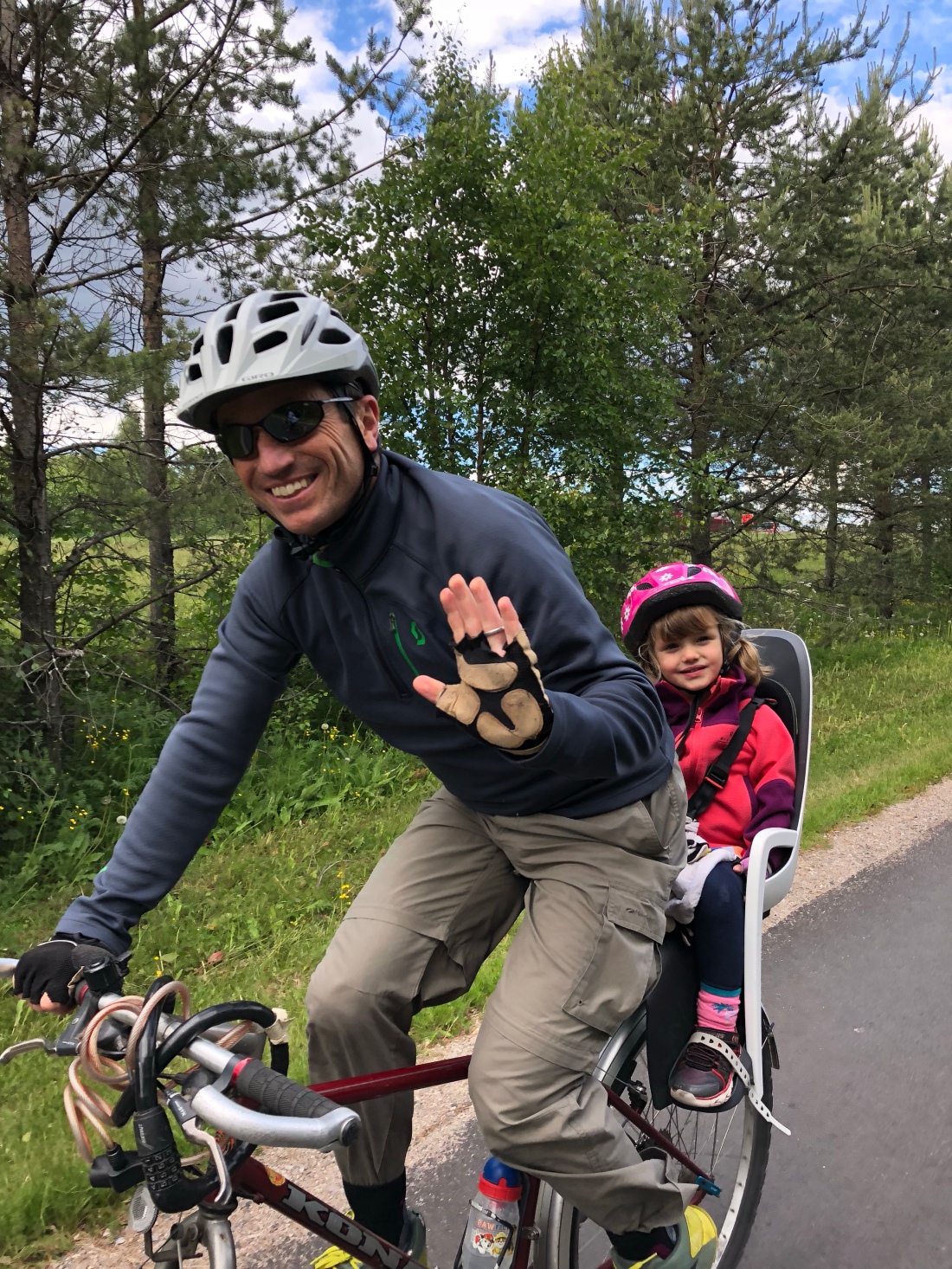 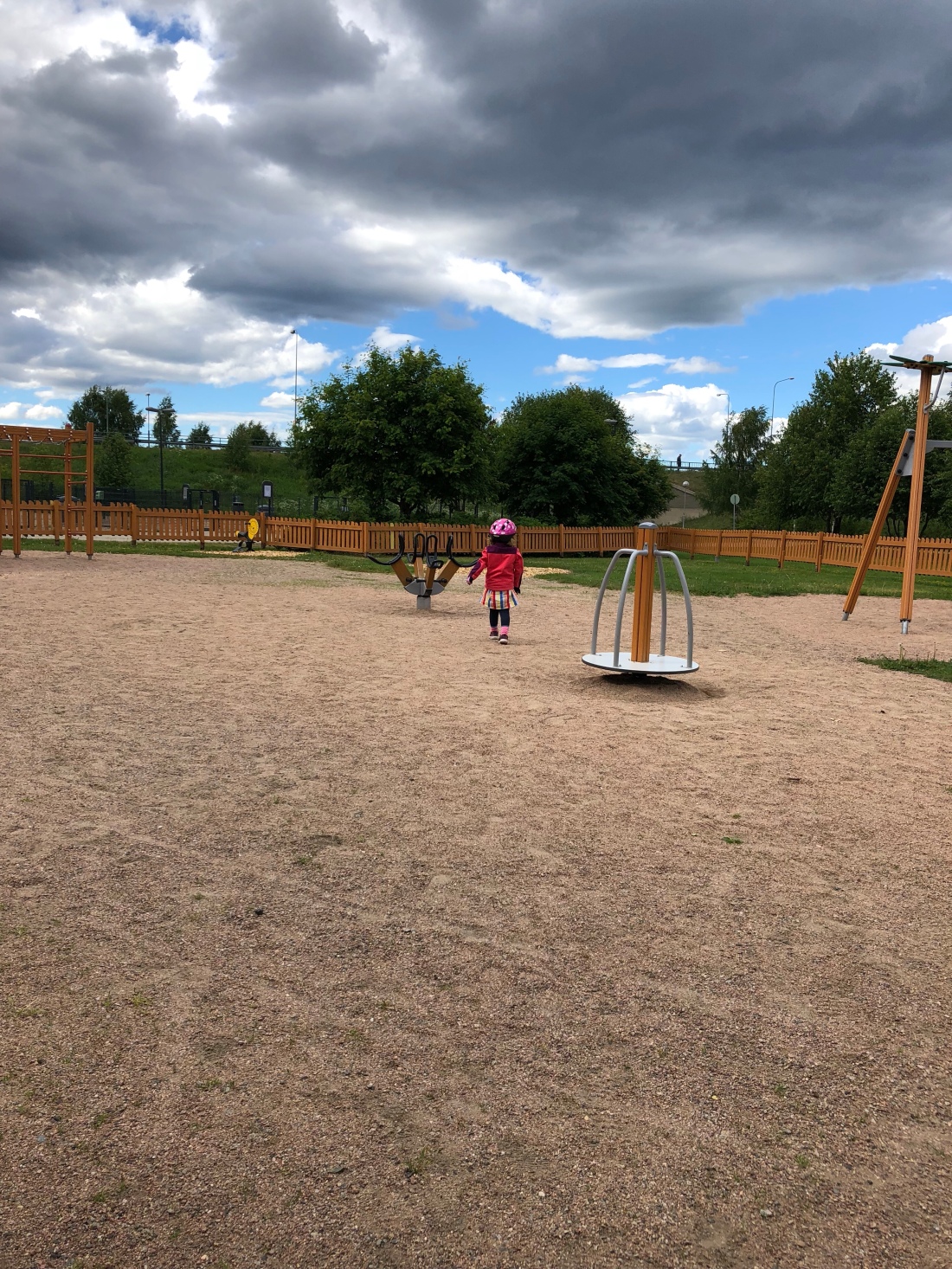 When we arrived home, we all relaxed a bit: Cornelia watched Peter Rabbit, Ian googled stuff about the Arctic Circle, and I downloaded photographs to my laptop and updated Cornelia’s scrapbook.  Then we had another game of the treasure hunt, although Cornelia hasn’t quite mastered hiding the clues and coins herself, so it’s always a bit of an extra challenge when she’s the pirate!!

We had a simple tea at home after an expensive day out (with Bugsy insisting that she drank her pirate grog from her “Little My” mug).  She was clearly very tired from all the excitement as she kept “over-crying” about things, needing lots of Mumpa cuddles (hurrah!).  We were a bit worried that she wouldn’t be able to go to sleep, as there had been some extremely loud drilling from the flat above us for well over an hour.  She went to bed at 20:00, and it eventually stopped shortly after 20:30 – at least an hour and a half of constant noise.  But it didn’t trouble her at all, and we haven’t heard a peep from her.

Ian and I are going to have a sauna in a moment (there is one in our bathroom!) and then we are hoping that we will be able to bundle Cornelia into Bluebell, so that Ian and I can drive to experience the midnight sun somewhere in the Arctic Circle.  But that will depend on the packing I get done just now!  Update to come…!

We bundled a sleeping toddler into Bluebell, drove about 20kms north well into the Arctic Circle to watch the sun not set!!! Felt magical and weird. Saw an Arctic Hare on the road. Toddler woke up and had a big cuddle with me while Ian refuelled at the Arctic Circle Shell station. Managed to get her home and back into bed by about 01:00. Am knackered now! 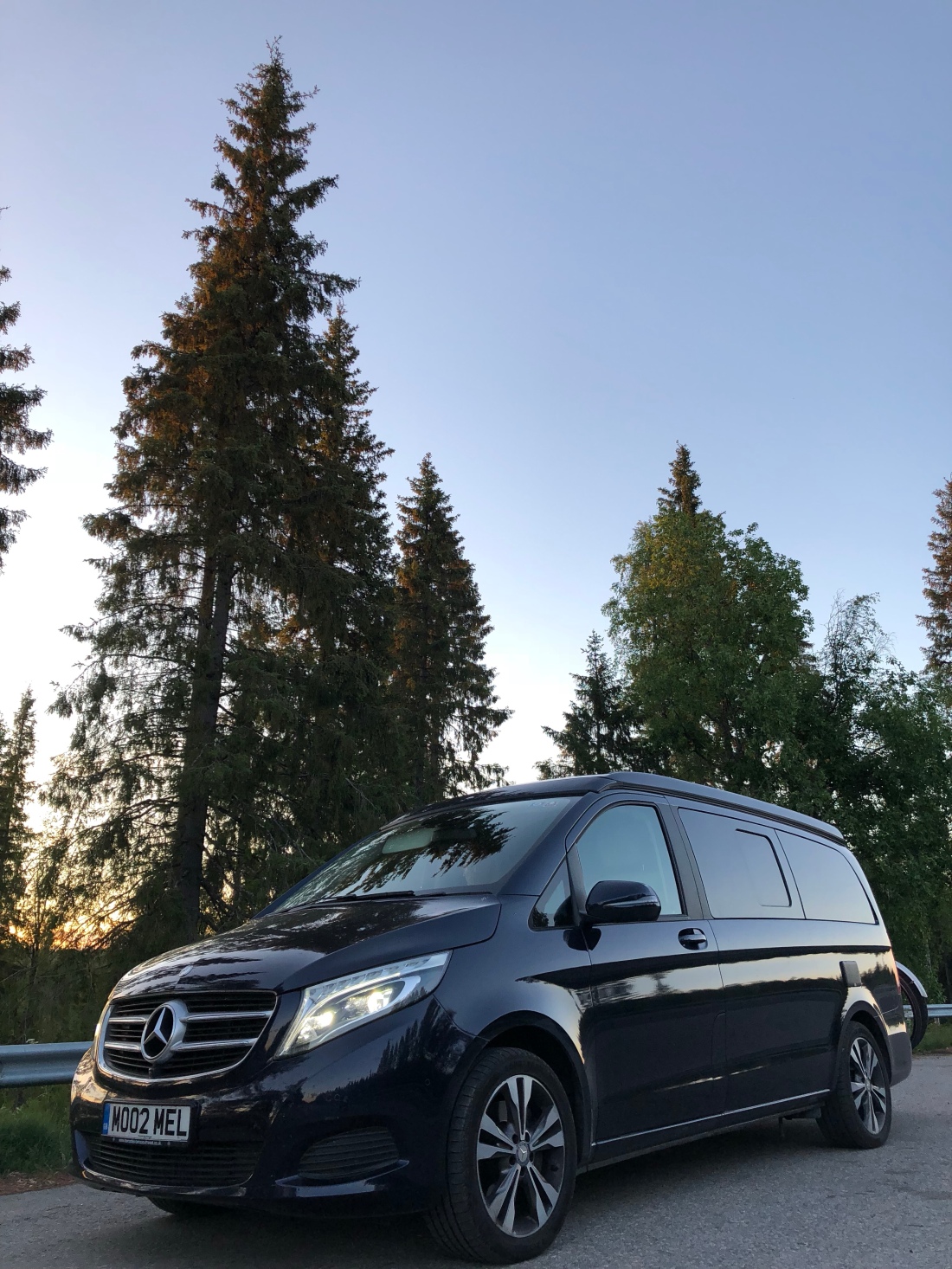 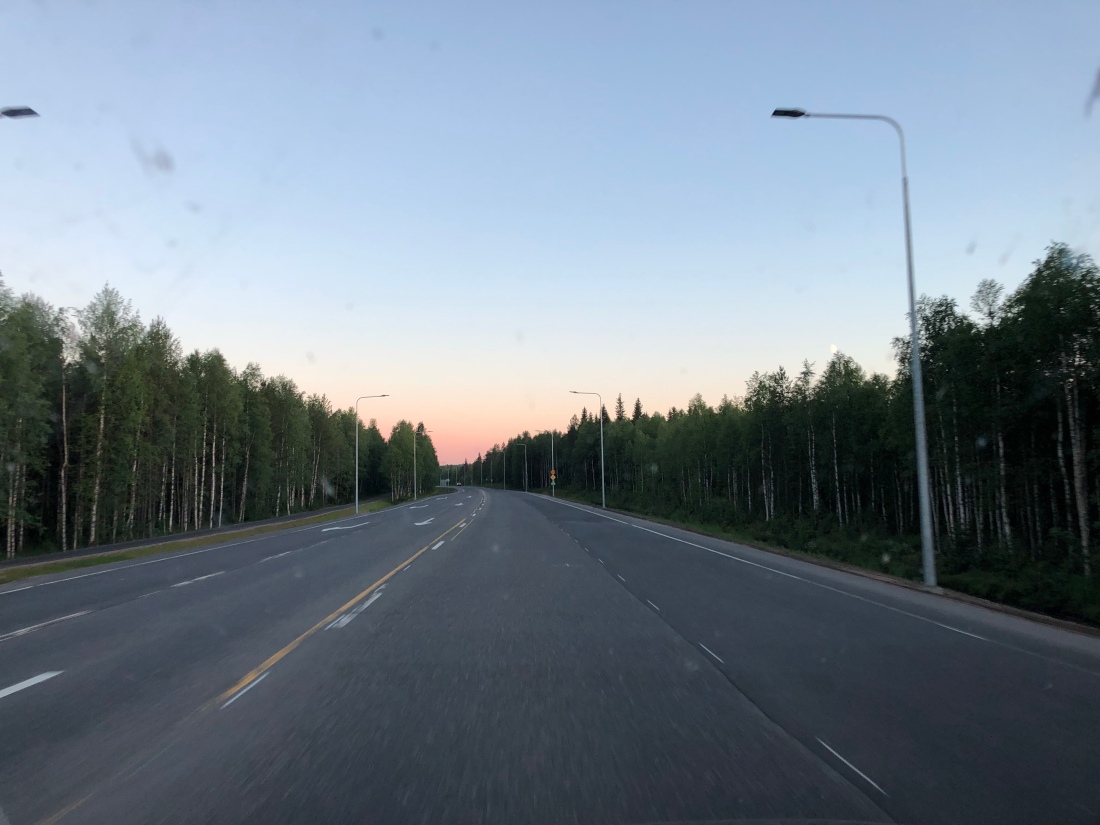